With large attractions like Star Tours, Splash Mountain, and Toontown eating up (what seemed like) the last vacancies within Disneyland, 1995 brought with it a striking addition of unprecedented size.

Indiana Jones Adventure: Temple of the Forbidden Eye was a culmination of Disney’s growing relationship with LucasArts, the successful Indiana Jones Epic Stunt Spectacular at Disney’s MGM Studios, Intamin AG’s Enhanced Motion Vehicle (EMV) system (developed for MGM Studios’s cancelled Dick Tracy ride concept), and the Adventureland-bordering Eyeore parking lot. With the WestCOT (R.I.P.) project already announced, an attraction this big for Disneyland Park was both unprecedented and indicative of Disney’s ambitions of grandeur (which Euro Disney was already in the processes of crushing). Quench your thirst for adventure in the Temple of the Forbidden Eye, but not before making the hike from Adventureland to the edge of civilization via an engaging but seemingly endless queue. To help ease the anticipated bulging wait times, Indiana Jones featured Disney’s first interactive line; in early years, guests could use decoder cards to read numerous petroglyphs on temple walls, or trigger booby traps hidden within its numerous environs. A few gags still remain, but a rerouting of the FastPass queue now keeps much of the waiting outside on busy days. Speaking of FastPass, Indy’s tremendous success (and numerous technical hiccups) helped lead to the now-ubiquitous virtual queueing system.

An authentic retired military Humvee leads guests right to the Chamber of Destiny, wherein temple guardian Mara would select one of 3 paths: eternal youth, endless riches, or visions of the future. Thanks to a little Disney magic, all 3 paths lead to the same temple (the effect is sorely missed; now only the middle path is chosen); however, by staring into the eyes of Mara – which Mara explicitly asked you not to do – calamity ensues. Snakes, fire, vermin, lightning, egregious EMV convulsions, and various entrapments befall explorers before Indy miraculously delivers them from certain death.

Other Disney resorts soon followed up with clones of the blockbuster ride, but with mixed results (and no “3 paths” scene). The thematically unique Countdown to Extinction opened with Disney’s Animal Kingdom in 1998, followed the thematically similar Indiana Jones Adventure: Temple of the Crystal Skull at Tokyo DisneySea in 2001. While Countdown (renamed Dinosaur in 2000 after a CG Land Before Time ripoff that nobody remembers) polarizes riders with its flimsy time-travel theme, both Indy rides are highly regarded (though Crystal Skull had less fanfare amid DisneySea’s impressive opening roster). The Indys share a number of scenes and effects, but Anaheim’s better queue, memorable characterization of Mara, and excessive use of fire gives it the edge over the Mara-less and fire-less Japanese version (although the Crystal temple houses a small tornado, which is pretty cool).

A grim outlook for Disneyland Paris was brightened considerably in the 12th hour by the resort’s highly anticipated Space Mountain incarnation, but fans of previous incarnations are well aware that a ride like Orlando’s Space Mountain couldn’t save a resort in 1995 …1975, maybe, but not 1995. Space Mountain – De la terre à la Lune began its life as the pipe-dreamy Discovery Mountain (named to reflect Disneyland Paris’s Jules Verne-inspired Tomorrowland counterpart, Discoveryland), wherein a Space Mountain roller coaster would have been featured along side a restaurant, Disneyland Railroad station, and two additional rides (a Journey to the Center of the Earth drop ride and a 20,000 Leagues Under the Sea submarine ride, both of which later found asylum (to a degree) at Tokyo DisneySea). The already-astronomically-over-budget Discovery Mountain project was further hindered by Euro Disney’s money troubles, reducing the project to just the coaster – but what a coaster it would be!

With the help of Vekoma Manufacturing and their electric winch launch system, space travelers rocket out of the large “Columbiad” cannon and into orbit (as depicted by Jules Verne’s A Voyage to the Moon and a Trip Around It), during which they are subjected to the blackness of space, the harshness of over-the-shoulder restraints, and the mercilessness of encountering three inversions in the dark with no way to brace for impact. The wildly aggressive ride and family-unfriendly 55in height requirement didn’t keep Paris’s Space Mountain from eliciting international notoriety, vastly improving brand image, and leading to Disneyland Paris Resort’s first profit. 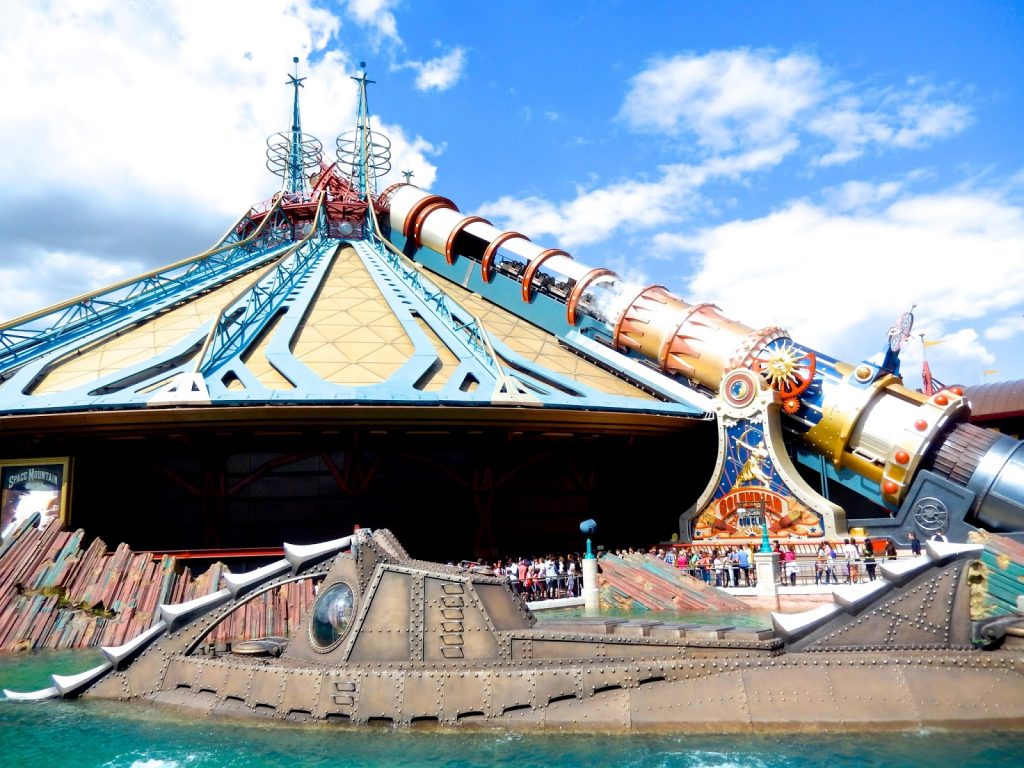 Less than 10 years after its initial launch, the world’s first modern launch coaster went under the knife to improve atmosphere, reliability, smoothness. The result, Space Mountain: Mission II further propelled the roller coaster’s reputation by offering guests an atmospheric and comfortable ride akin to its systematic successor Rock n’ Roller Coaster attractions at the Orlando and Paris Disney Studios parks. As another 10 years came to pass, Space Mountain once again closed for transformation into its latest identity: Star Wars Hyperspace Mountain: Rebel Mission. Unlike the Anaheim Space Mountain overlay, Rebel Mission is a large-scale, long-term overhaul of the attraction, featuring a new story, new music, new scenery, and new custom Vekoma 1212 trains (whose vest restraints will improve visibility and further reduce roughness). Star Wars Hyperspace Mountain: Rebel Mission will no doubt set a new standard for full-immersion theming when it opens this spring; it doesn’t take a genius to see that the Columbiad cannon launch will make for a pitch-perfect jump to Hyperspace.