You knew it was coming. Because either A) you knew that Disney’s exciting new resort would obviously have a mention considering all of the amazing new technology at work, and B) you probably noticed the banner for this article. Enter Disney’s all-around champion roller coaster: TRON.

Originally drawn up for Walt Disney World and scrapped (believed to be due to the Tron: Legacy film’s lackluster commercial response), the concept was chosen to support Shanghai Disneyland’s Tomorrowland in place of a 6th Space Mountain. Vekoma’s “Booster Bike” motorcycle roller coaster has already found several homes around the world, but the all-too-perfect implementation of the ride system for a Tron attraction was too good to pass up. Imagineers got right to work on Disney-fying the Booster Bike coaster into this decade’s answer to Rock n’ Roller Coaster, taking the concept and applying a (literal) blanket of TRON glitz. Inside Disney’s most mesmerizing boarding area you’ll find guests being “fitted” to their lightcycles, a sequence where articulating ergonomic handlebar and restraint placement leaves riders feeling at one with the ride (this process would catch more than a few snags in the American market; perhaps another reason for its Orlando cancellation. Two trains each have a car of upright seating for special needs guests, however). Once every dark blue lightcycle has turned to light blue (indicating all seats are locked), racers are dispatched into a matching mirror-and-glass launch bay where they await their competitors. 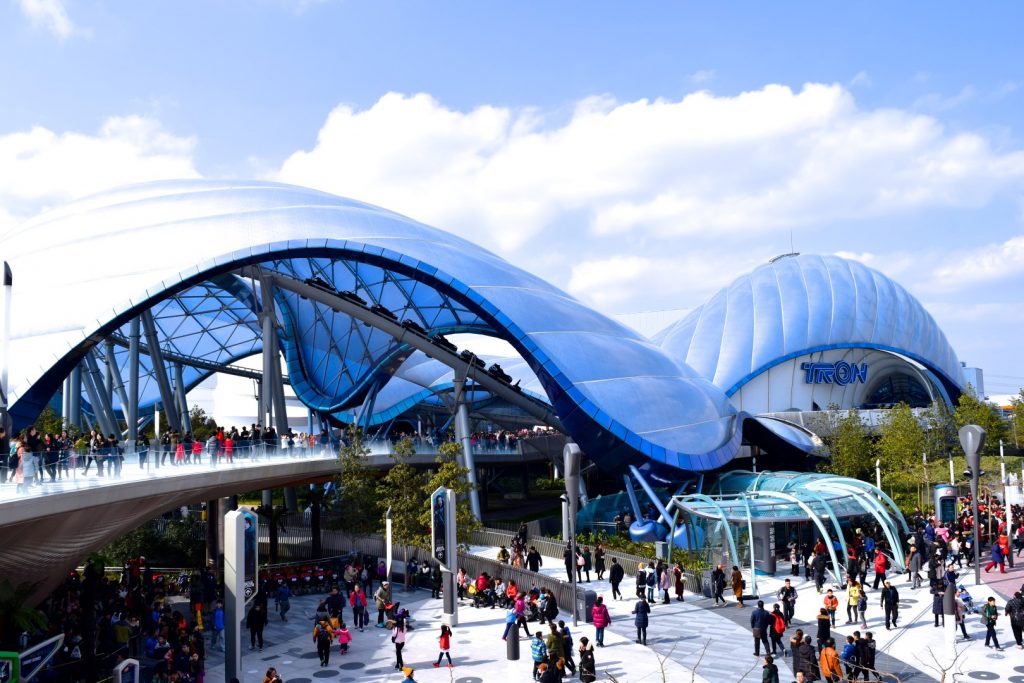 The pulse-pounding launch countdown leads to the firing of 14 lightcycles at 60mph (making it Disney’s fastest coaster) into the aurora boreal-istic blanket canopy of lights, projections, and echoing Daft Punk synths; a true spectacle for riders and spectators alike. Once you’ve entered the indoor show building, the real challenge begins: beat the orange team to each of the 8 lighted gates throughout the course or die trying. Neon colors, hexagonal reflectors, and synchronized imagery follow your team through the sensory overload that is TRON Arena. Daft Punk’s thumping euro-haus jam is now a backdrop for a robotic female announcer coyly keeping score as each light gate is reached. Turns and clearances narrow as you get closer and closer to the final gates, but not before a nasty wipeout on the orange team swallows up a few lightcycles. Blue team flies through the last gate, ending the game and silencing The Arena (which turns to black after hexagonal flashes engulf the remaining lightcycles). There’s nothing left to do now but take a deep breath, light up a cigarette, and add TRON (1982) to your Netflix queue. 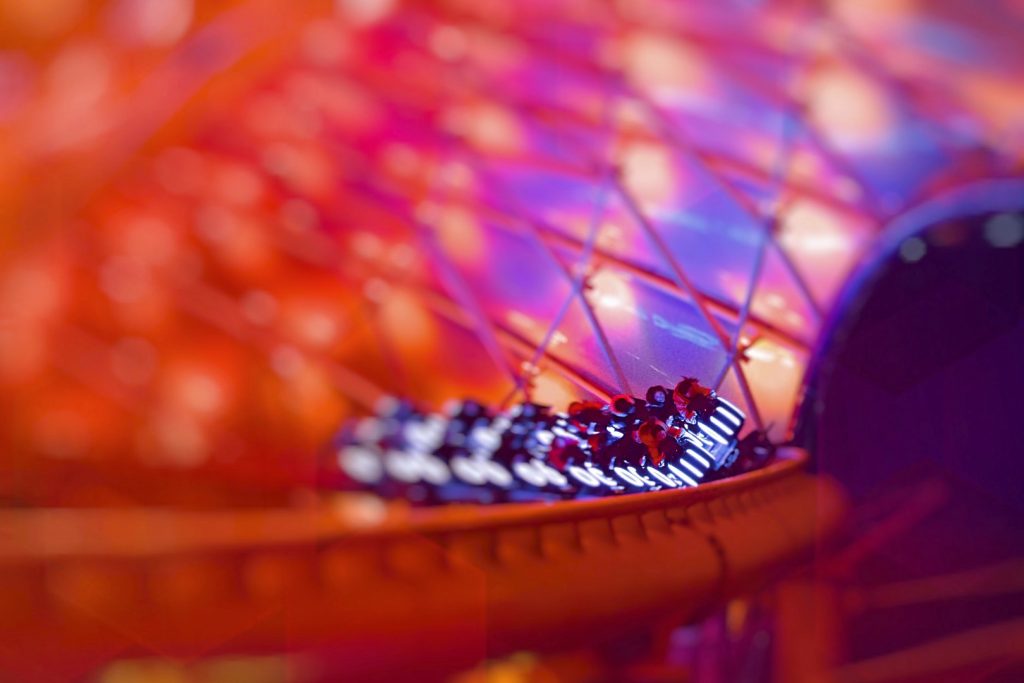 1. Pirates of the Caribbean – Battle for the Sunken Treasure, Shanghai Disneyland

Yes, of course Pirates is featured on this list (it wouldn’t be a Disney attraction list without it). And yes, Shanghai Disney has the #2 AND #1 spots on this Top 20. With a giant blank canvas of open space, solid funding, and one of the world’s most successful film franchises for inspiration, it’s no surprise (and probably no secret at this point) that Pirates of the Caribbean – Battle for the Sunken Treasure is Walt Disney Theme Parks’ greatest attraction yet.

The original Pirates of the Caribbean was the last Disneyland attraction touched by the hands of Walt Disney himself. Said to be his very favorite project, Walt’s love for Pirates is shared by all who cruise its waters since its opening in March of 1967. Originally intended to be a walk-thru attraction, Pirates of the Caribbean was quickly upgraded to a massive boat ride after the runaway success of it’s a small world and its pump powered flume system. With a 20 minute journey of lifelike animatronics, stunning environments and thrilling drops, Pirates would be Disneyland’s most impressive attraction; perfect for anchoring the first new area to grace Disneyland since its opening day, New Orleans Square. Later Pirates rides would find homes in the Adventurelands of other Disney parks (although Tokyo Disneyland’s Adventureland does contain a small French Quarter for Pirates), but all would keep the same overall theme and story— until now. 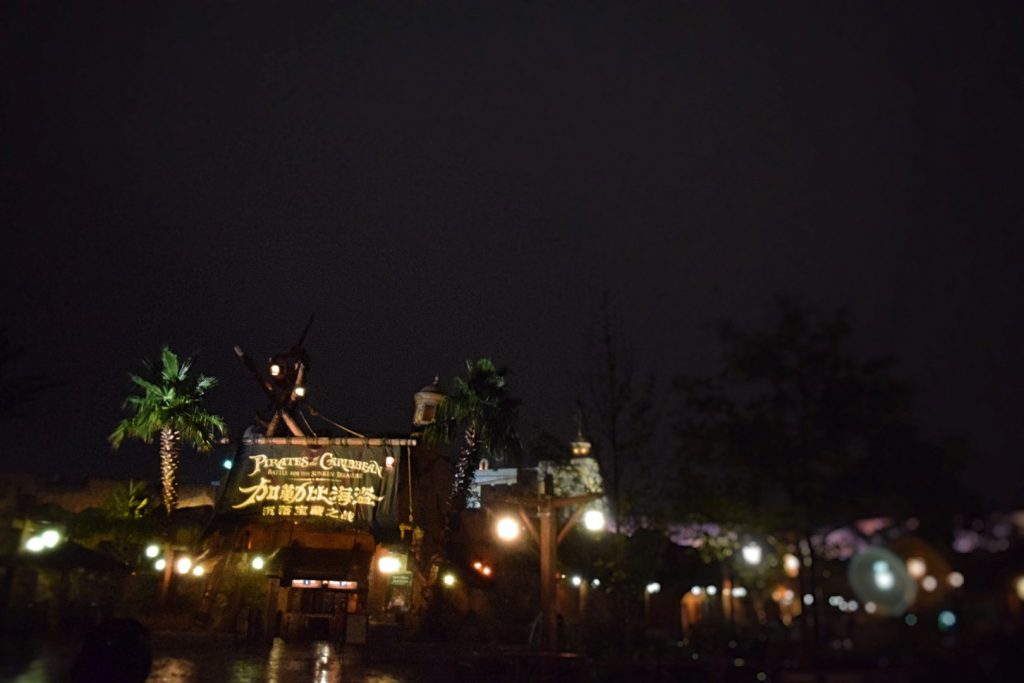 While the new Pirates has its own unique story (staring the infamous Captain Jack Sparrow and his sea-sickening adversary Davey Jones), lots of inspiration comes straight from the Pirates Walt so loved, including an indoor restaurant that forever serves under a nighttime sky, and the ubiquitous scene of jailed pirates attempting to lure a stray dog holding the prison keys in his mouth. A drift through the Caribbean starts off innocently enough; its not unlike the classic Pirates ride until drifters are confronted by Jack Sparrow himself (brought to life in plain sight from the form of a skeleton). His dialogue is probably amazing, but non-Mandarin speakers will have to wait until a transcribed POV of the ride washes up to get the whole story. The massive 30 passenger boats are no ordinary dinghies; by this point in the cruise they’ve shown themselves to have a mind of their own – twisting and turning as they float into the abyss.

Besides numerous, remarkably lifelike audio-animatronics and a first-of-its-kind flume system (still more echoes of the original Pirates), Battle for the Sunken Treasure brings ashore the sharpest projection mapping Disney has thus far executed. A pair of sensational, Soarin’-sized screen sequences bring major plot points to life in a way that no other tracked ride has previously done, and, despite their awesome size, work flawlessly with the ride’s impressive array of detailed physical scenes. As the ride’s title suggests, even non-Mandarin speakers know this pirate tale ends with a final fight between Davey Jones and Jack Sparrow for the region’s famed treasure trove (a battle that will likely long live as the world’s greatest dark ride finale), complete with a dynamite explosion that sends riders backwards down a double drop of roller coaster track (whether that makes this Pirates a roller coaster is up to you).