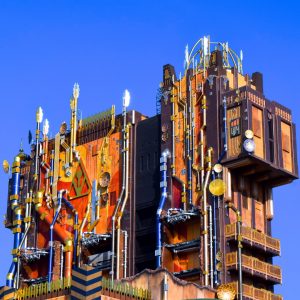 As frequently as we seem to be there now, noticeable changes are always taking place at The Happiest Place On Earth.

Most notably, Guardians of the Galaxy – Mission: Breakout! has opened to the public!

Now that the controversial transformation of The Twilight Zone: Tower of Terror into Guardians of the Galaxy is complete, we thought we’d hit up Disney’s California Adventure to see what the fuss is about. 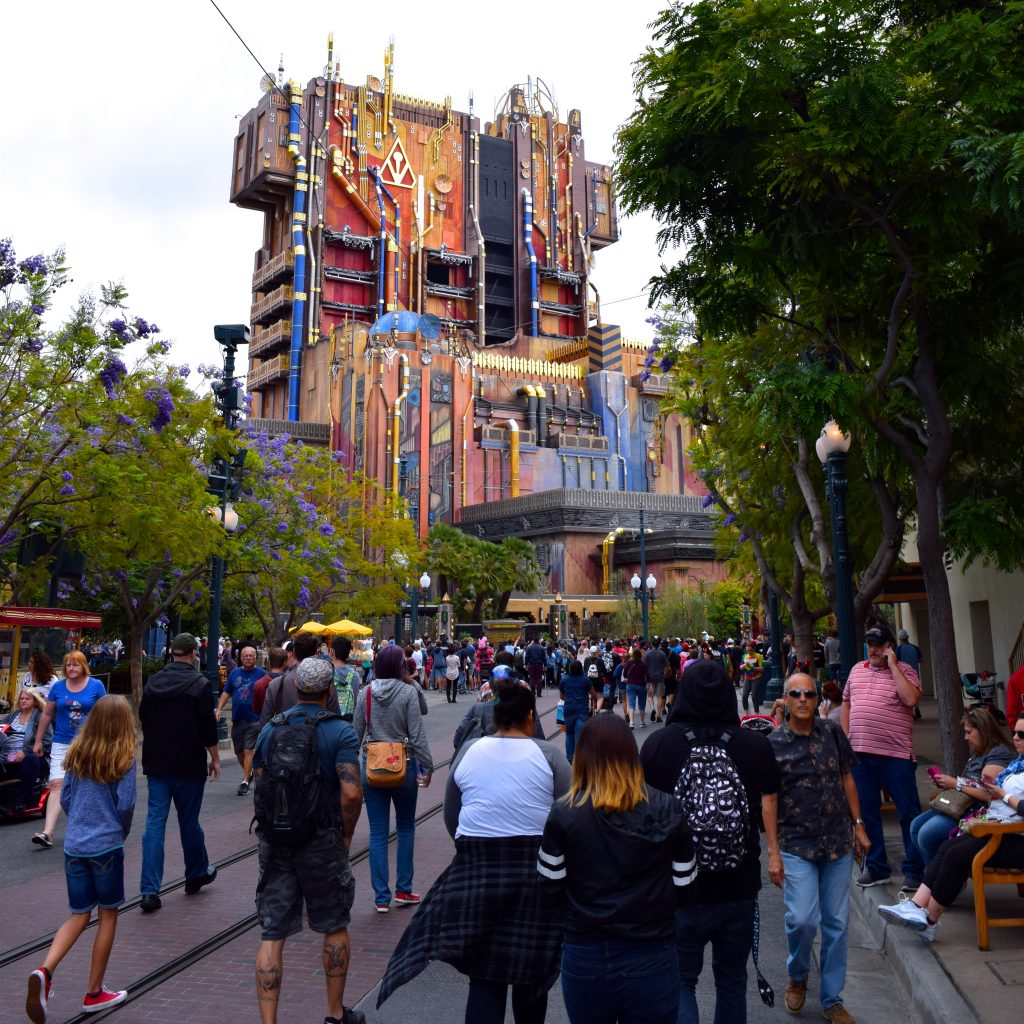 And what a fuss indeed! The queue for Guardians well overflows into a makeshift queue located in one of the park’s backstage areas. 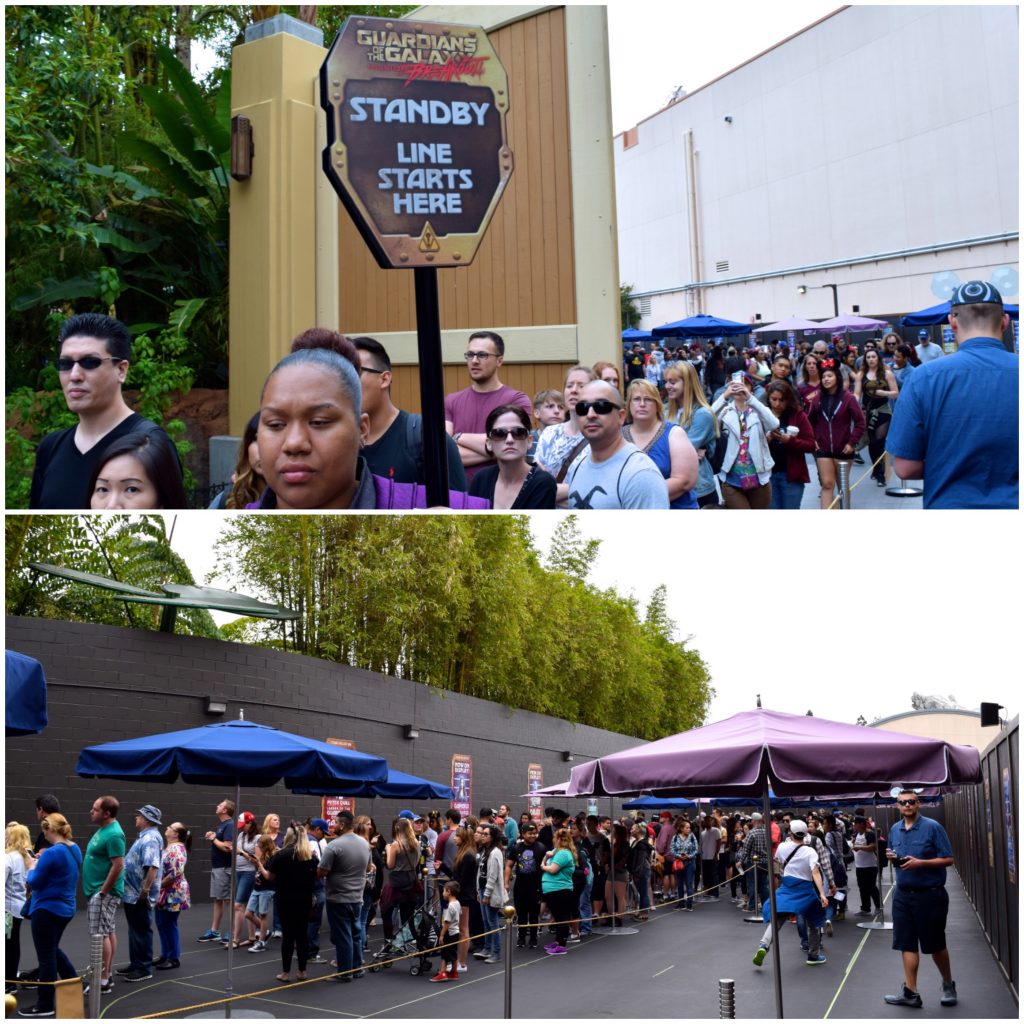 The standby line was projected at 120 minutes, but it only took about 90. 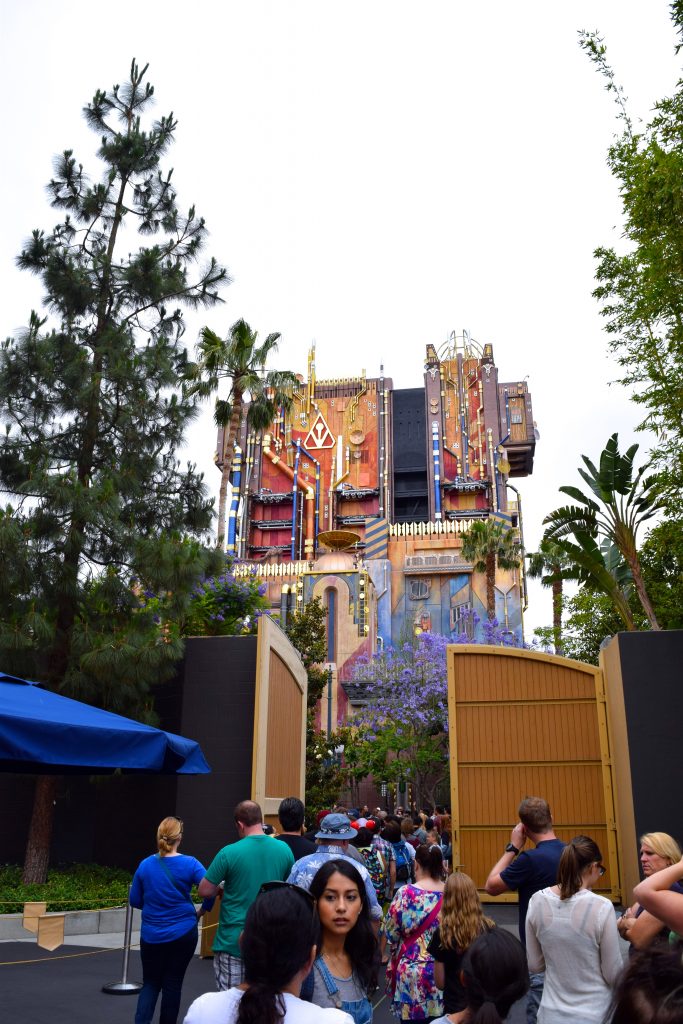 Guardians of the Galaxy – Mission: Breakout makes a solid first impression. The tower details verge on garish, but I  have a hard time arguing that its worse than the played-out Hollywood Hotel look. 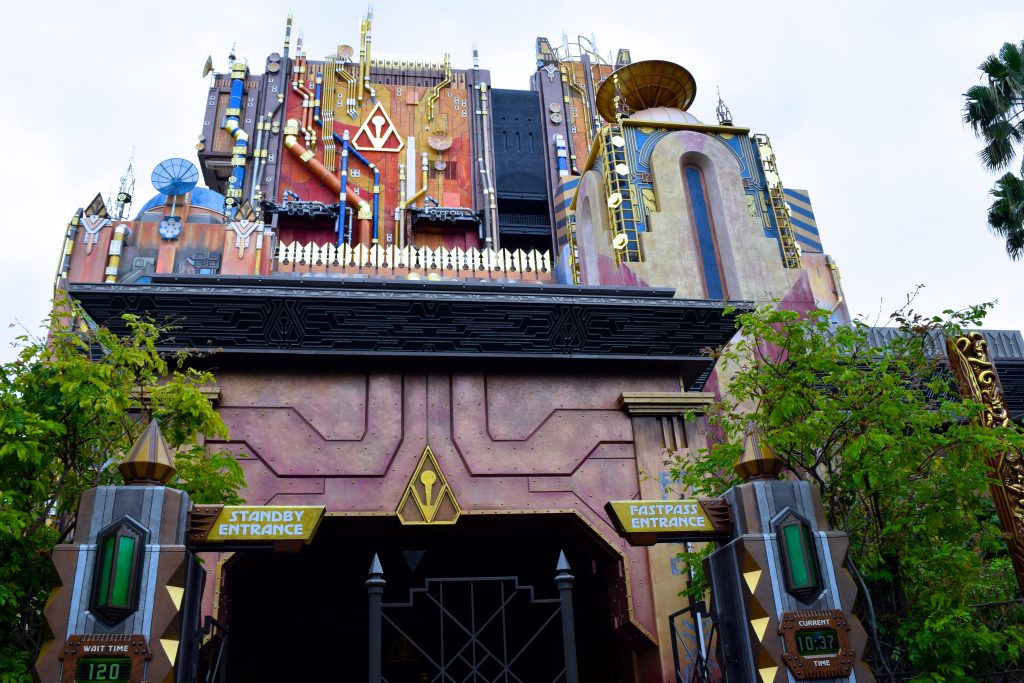 The overstated look of the attraction actually goes a long way toward illustrating the eccentricities of the attraction’s antagonist, “The Collector”, his likeness shown here in the form of a solid gold statue.

The outdoor queue has a variety of plant specimens on display, some of which are obscure enough to pass for foliage of the alien variety. 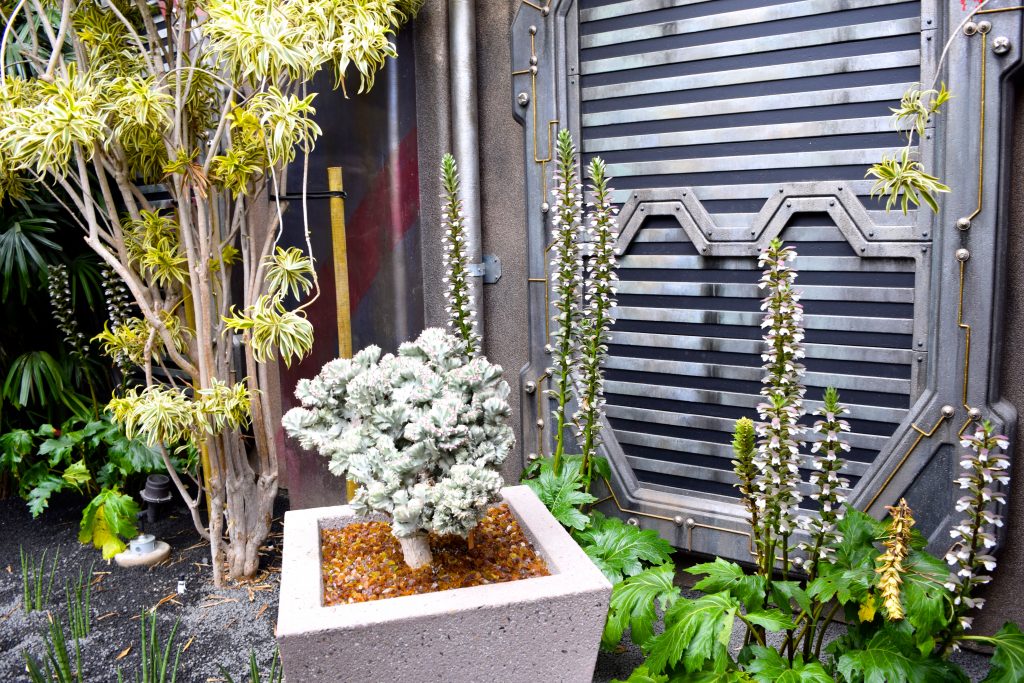 What was once the lobby of the Hollywood Hotel is now an exquisite monument to The Collector’s exquisite taste in priceless contraband. 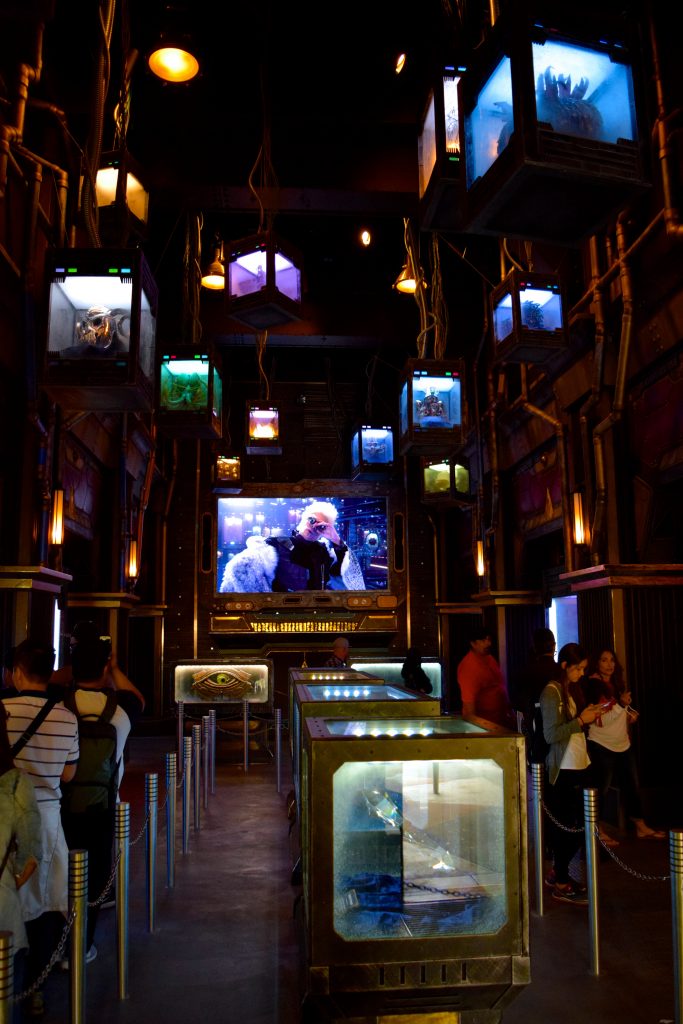 The queue moves too fast to allow for full appreciation of the menagerie of items on display; rerides are a must for this among other reasons. 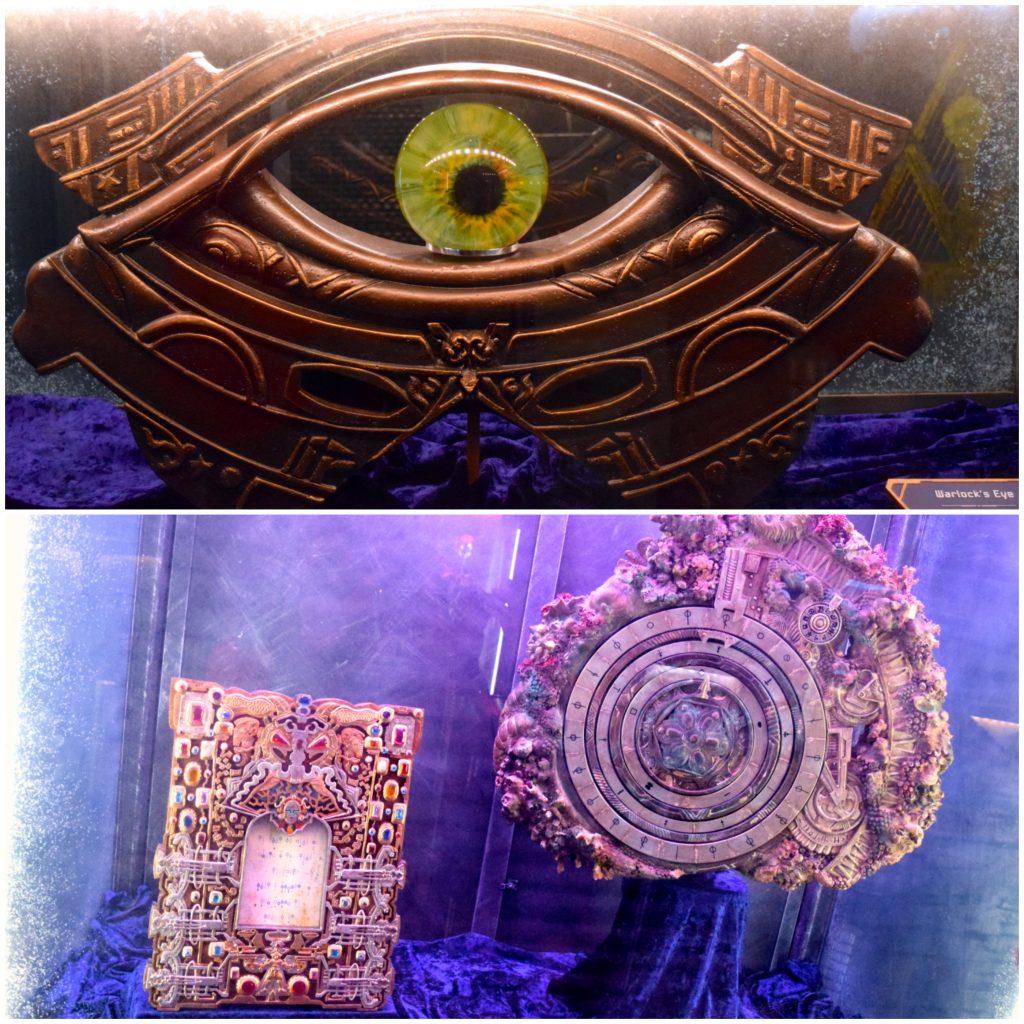 The crown jewel of The Collector’s efforts is The Guardians of the Galaxy, shown here in astounding detail thanks to 4K resolution projections. 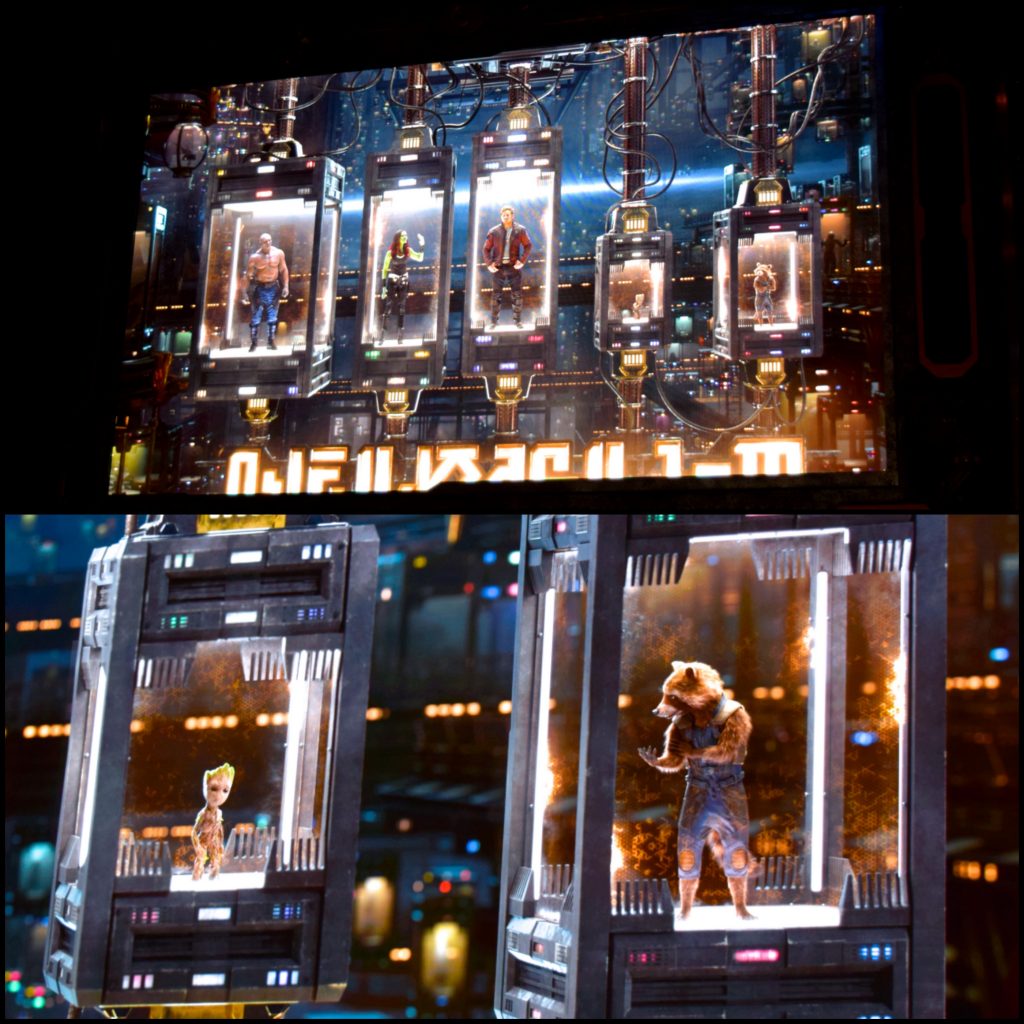 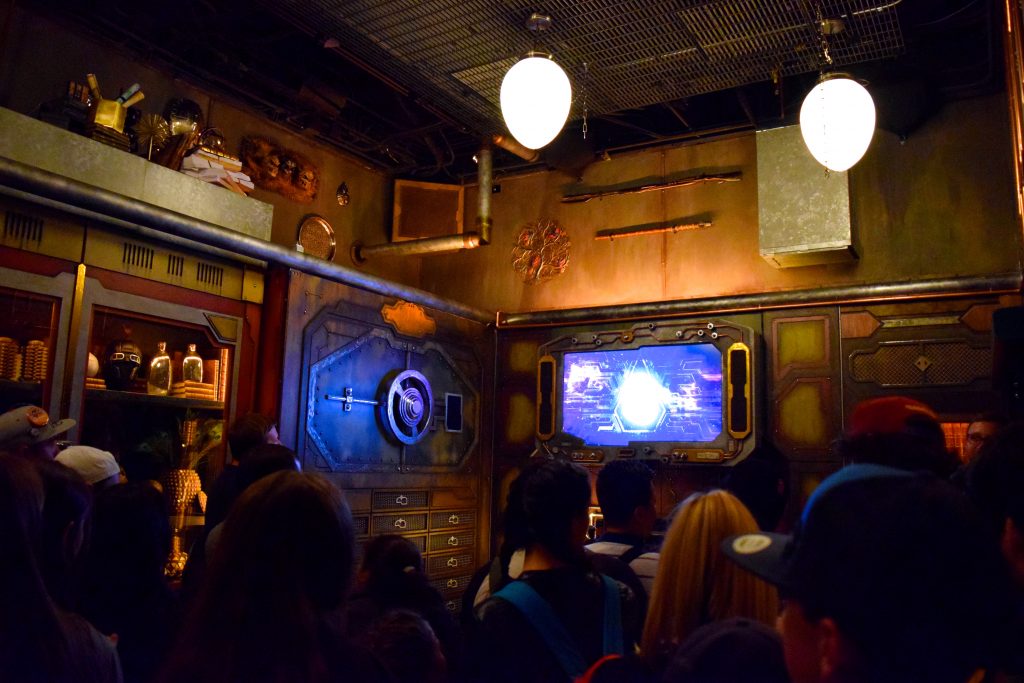 …which is promptly hijacked by Rocket Raccoon (a show-stopping Audio-Animatronic). 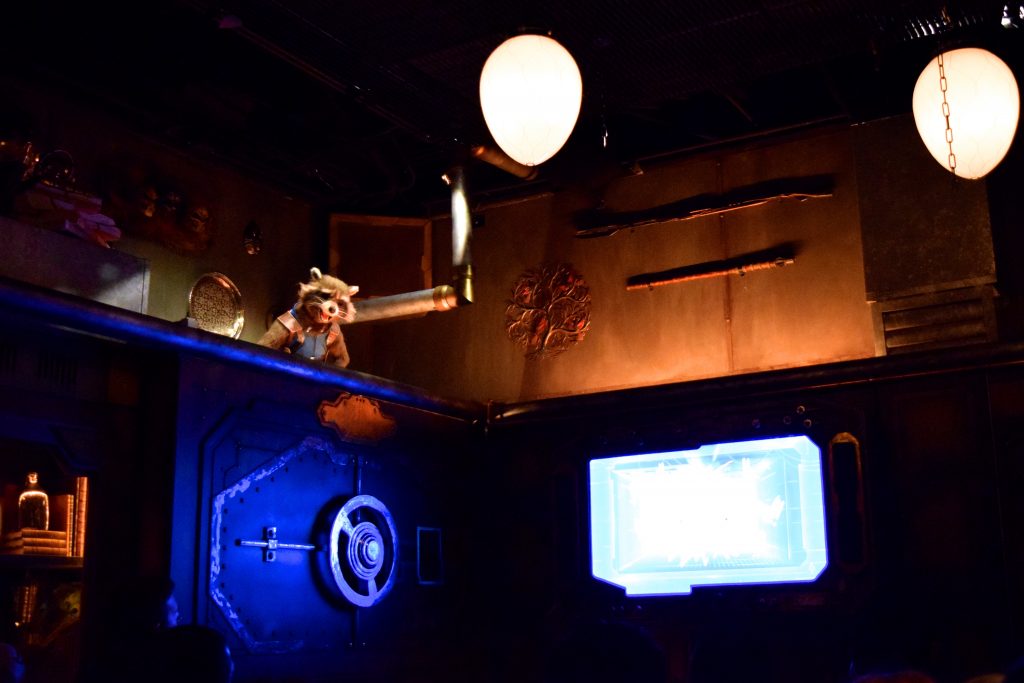 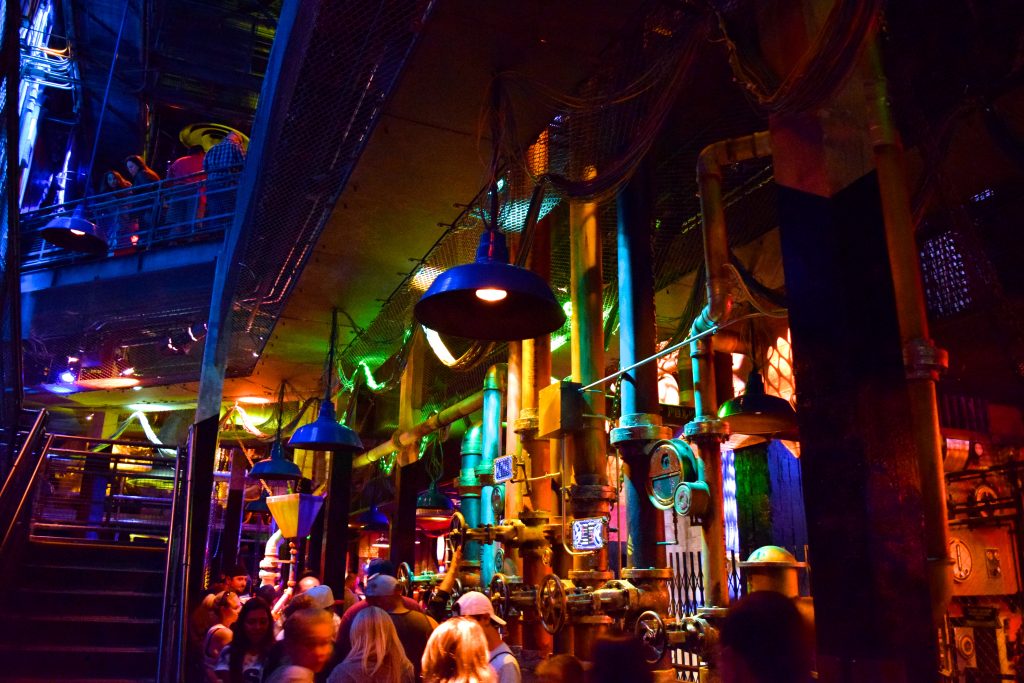 …not the least of which includes Harold the abominable snowman from Matterhorn Bobsleds. Disneyfiles and Marvel Universe fans alike will find that Guardians is awash with “Easter eggs” like Harold. 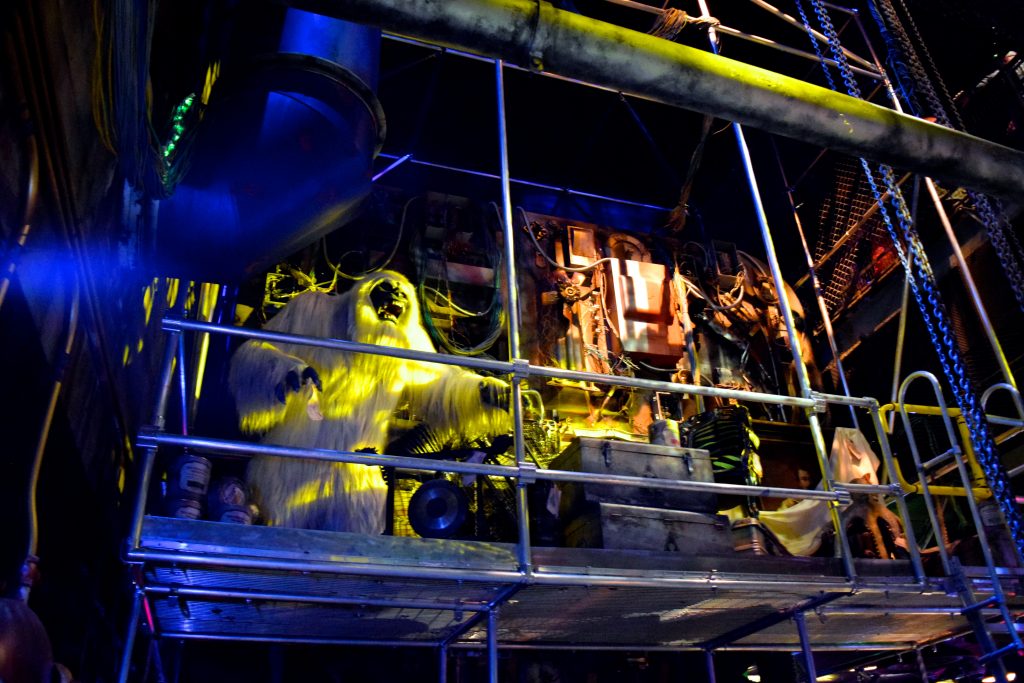 Overall, I’m very impressed with Guardians of the Galaxy – Mission: Breakout!, and not just in a “it’s good for what it is” sort-of-way. The attraction was always a switch hitter, living somewhere around the categorizations of “drop ride” and “motion simulator”, but the storytelling element of Guardians (six different stories in total; varying in theme music, drop program, and overall events of escape displayed via a network of 4k screens ) begs a “flying theater”  mention as well. Guardians is funnier, sharper, and deeper than its predecessor, and while the retiring of Tower of Terror was read by many as an out-of-touch move, its replacement demonstrates just how in-tune the Imagineers are with their audience.

In other news, our obligatory Splash Mountain ride lead to another evacuation; that’s 2 evacuations out of our last 2 trips through the Laughin’ Place. 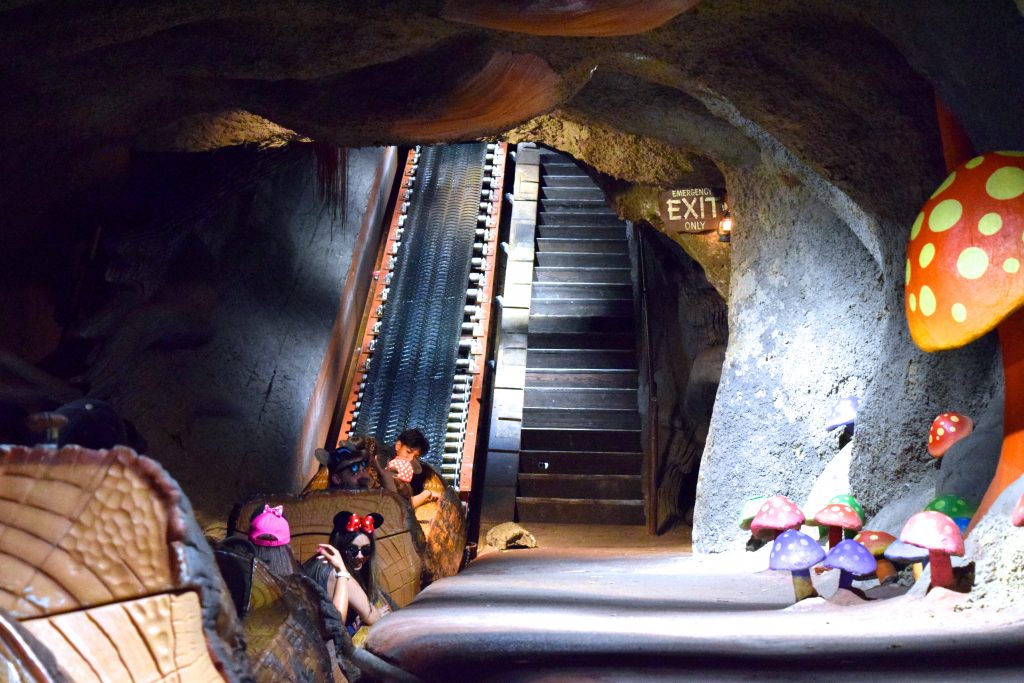 Our last evacuation was just before the ride’s station, just after the big Zip-A-Dee-Doo-Dah scene; this time it  was right as the Laughing Place was going from happy to not-so-happy. The kids seem to be enjoying it, however. 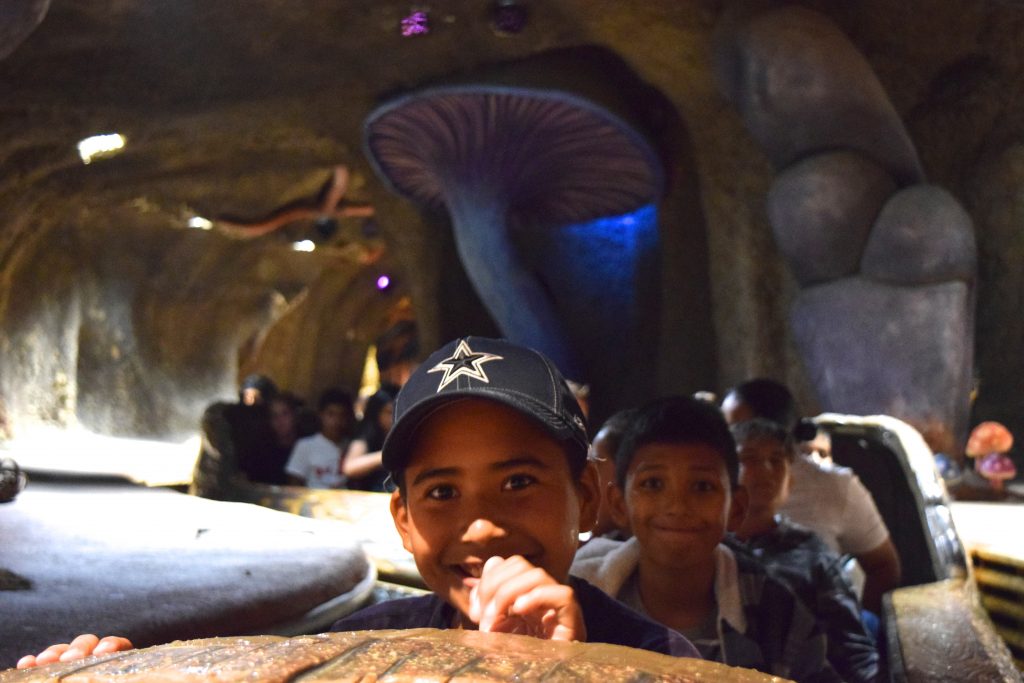 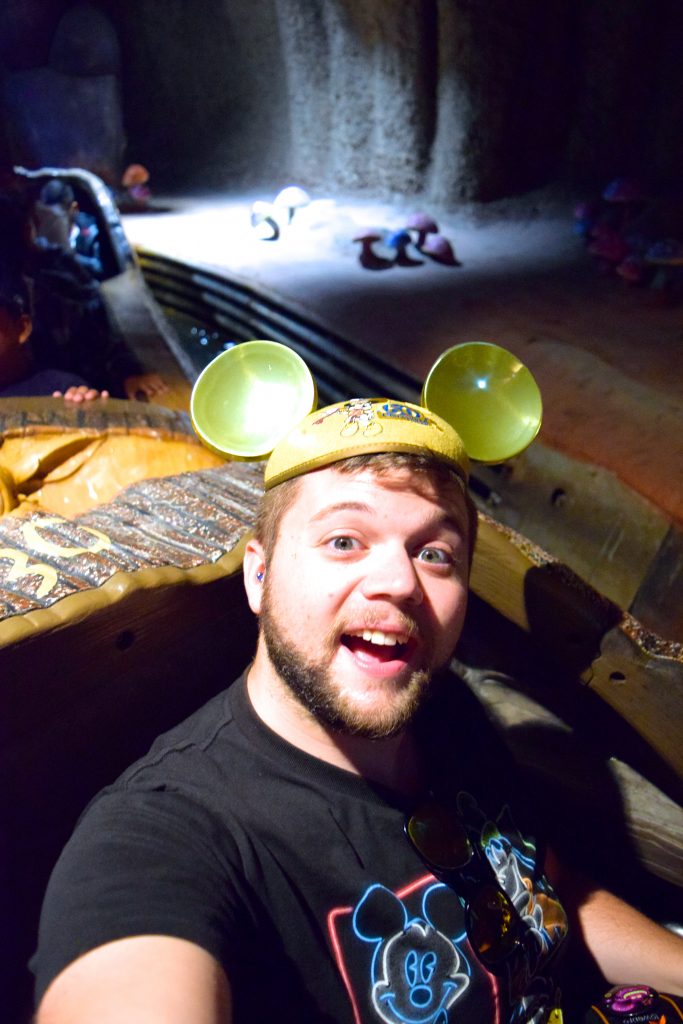 I’m parked next to the rabbits, who are concerned about Br’er Rabbit’s safety, which is demonstrated only by song (not by actually doing anything helpful). 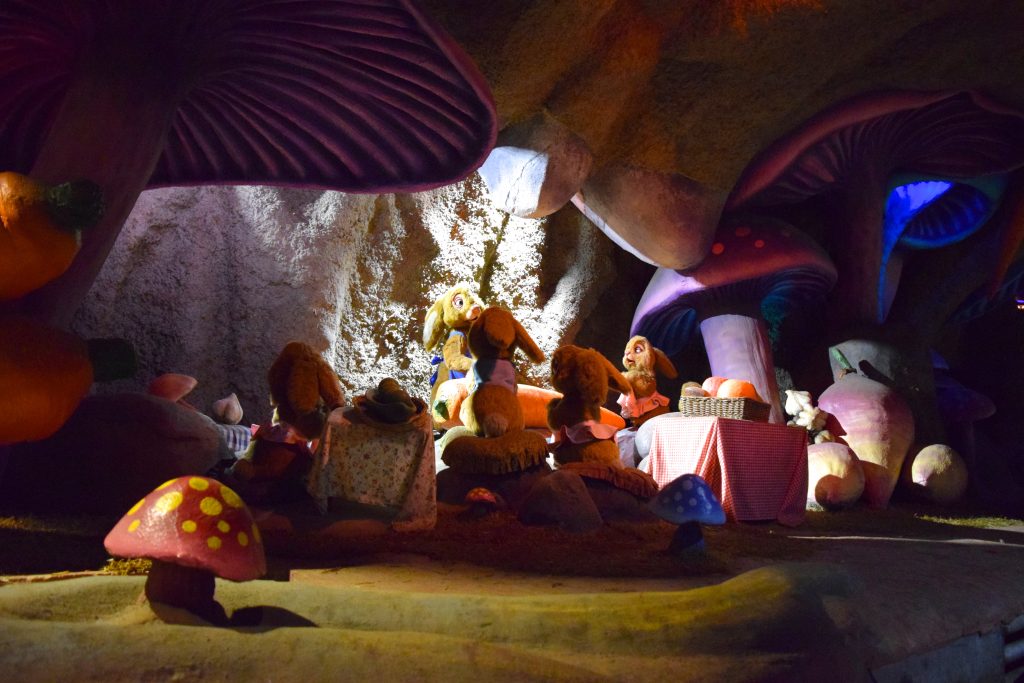 It would take more than a log jam to keep some guests from being camera-ready. 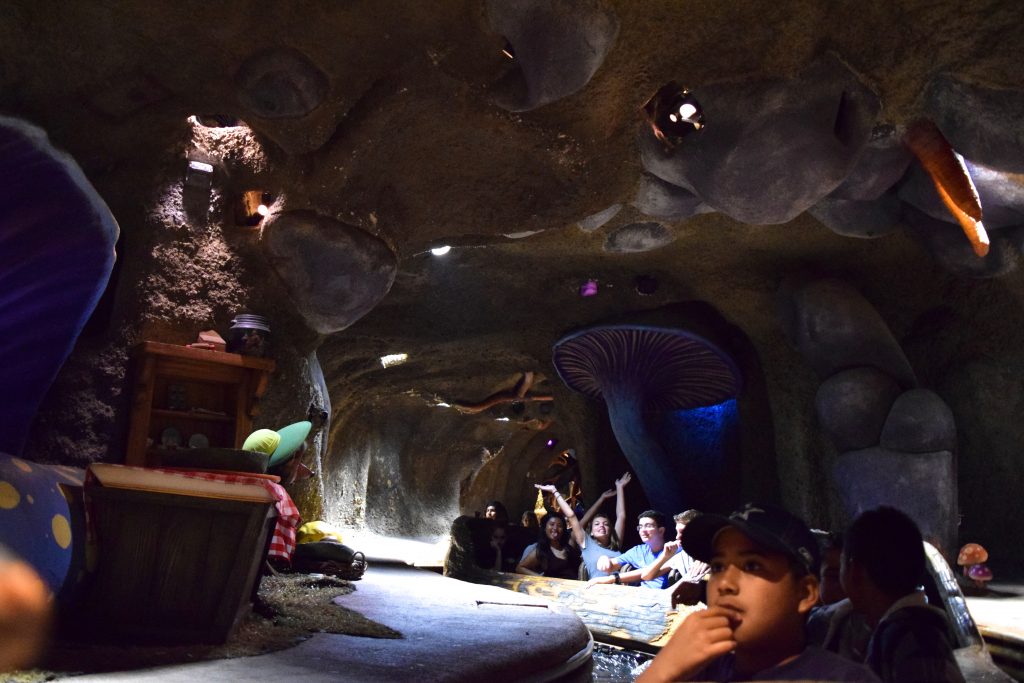 Sean was a few logs ahead of me, which meant I got to document his evacuation in full. 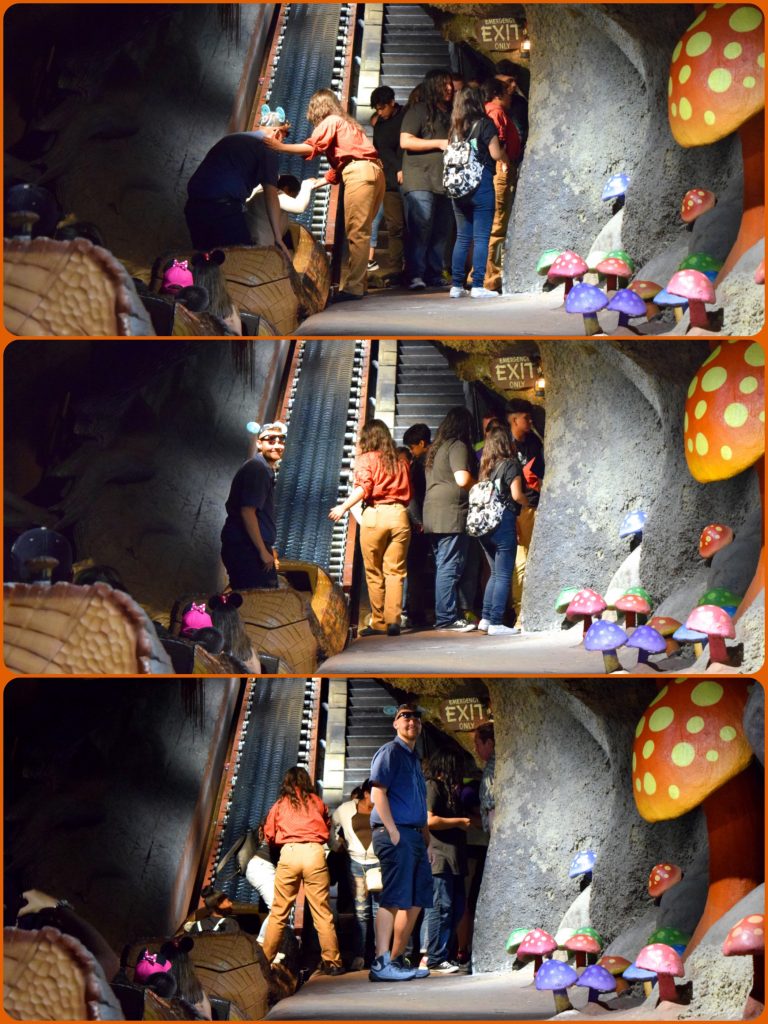 Once I was helped out of my log, I took the opportunity to capture some interesting points of view. 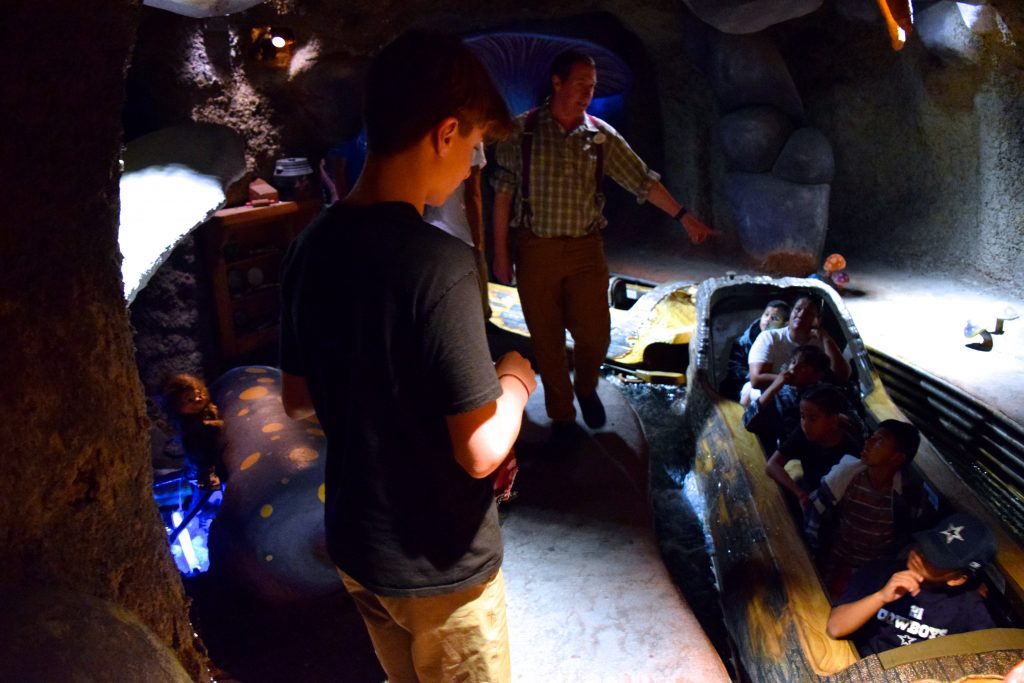 Some guests had to be walked down all those stairs! 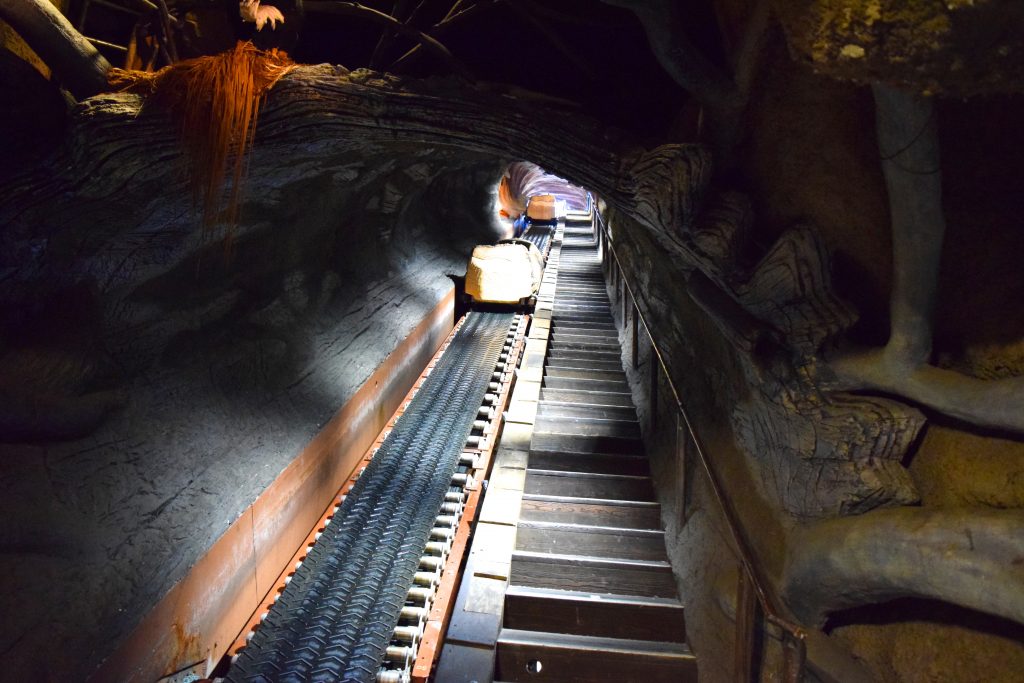 Out into the backstage area (again). 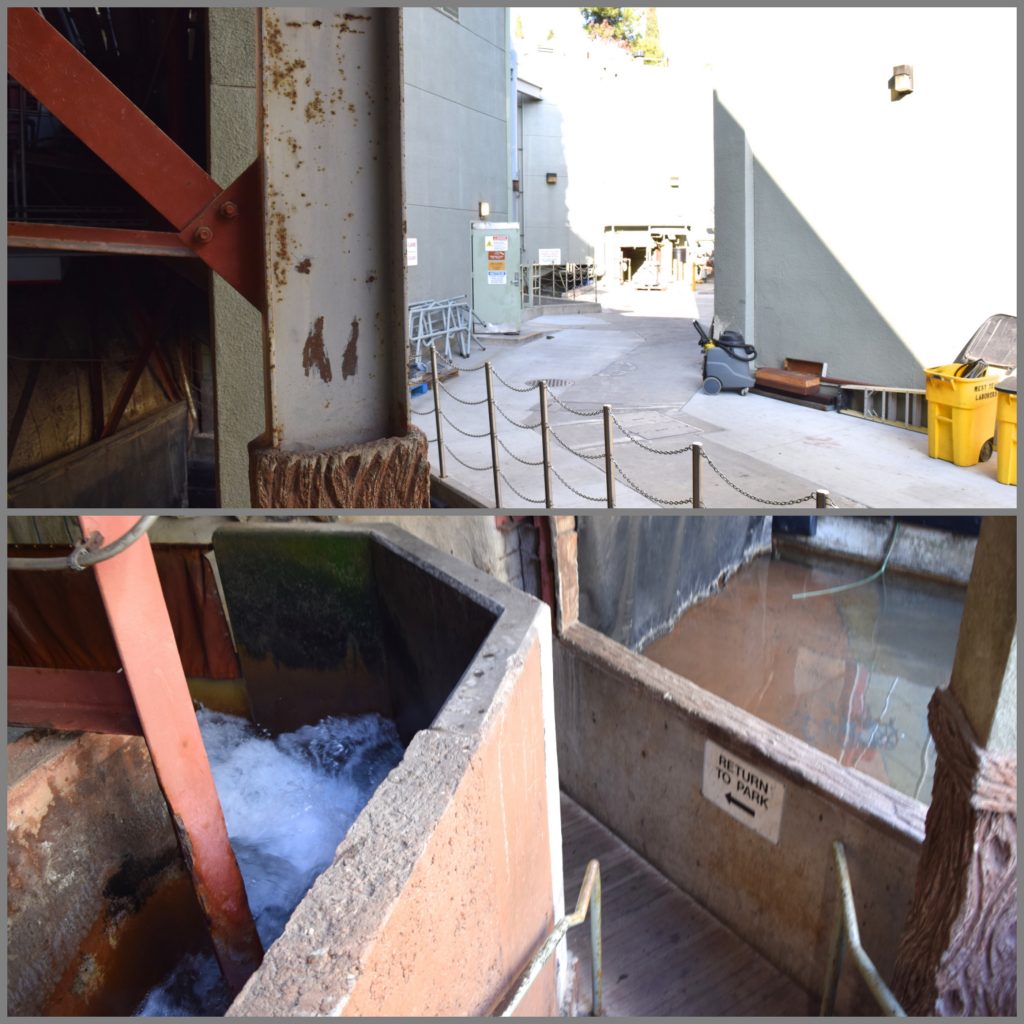 While this was our second consecutive Splash evac, it was our first that yielded a free FastPass (last time it was right before close anyway). The FP works on all rides except for Guardians, but fortunately we have that covered! 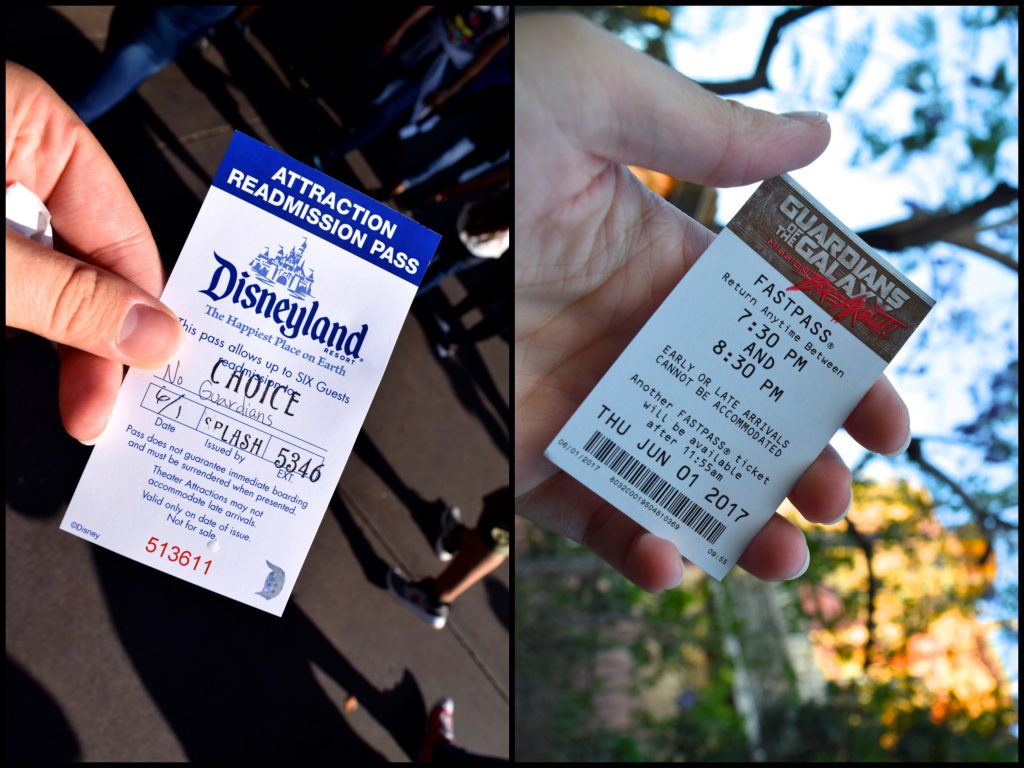 Other goings-on in the park include:

A GIANT crane right next to Big Thunder Mountain, 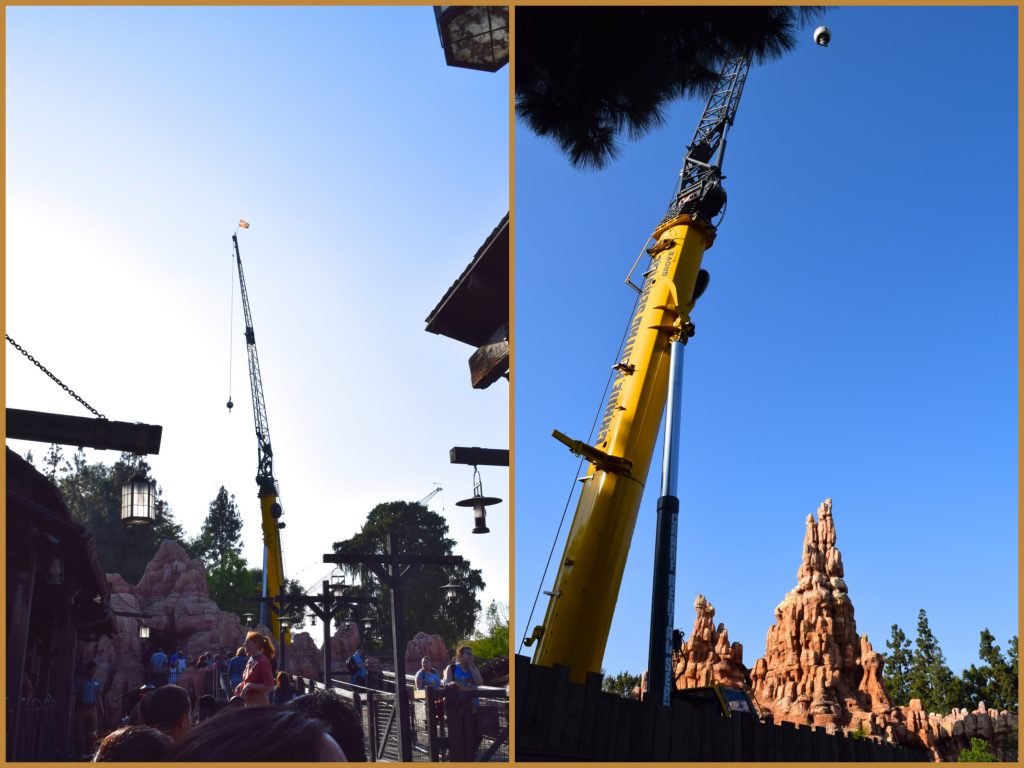 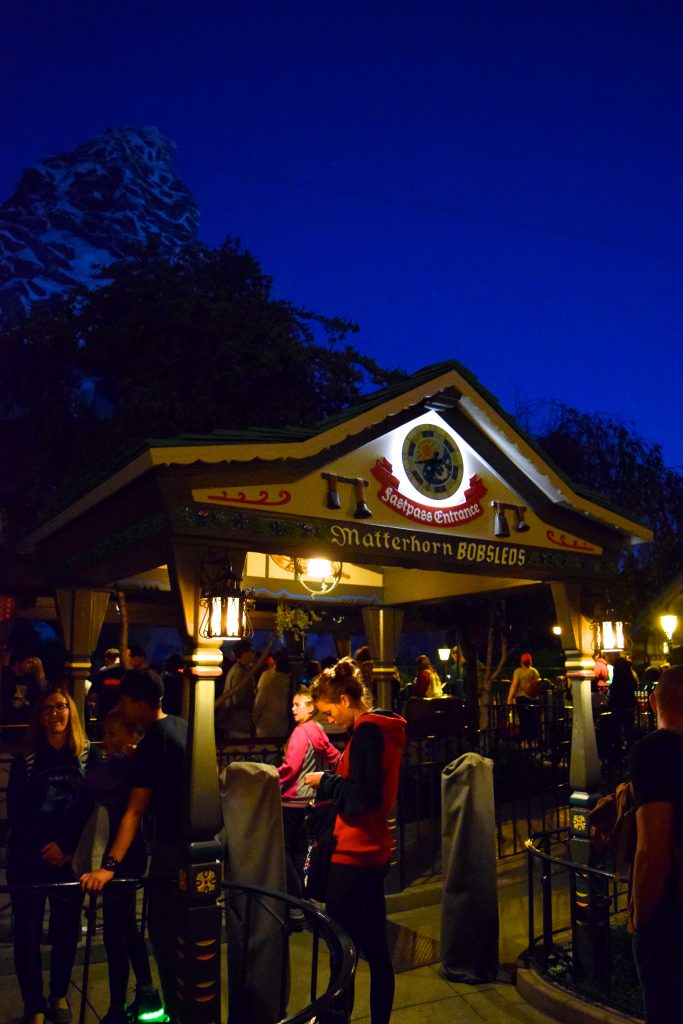 And the return of classic Space Mountain after over a year of Hyperspace Mountain (plus Ghost Galaxy in October, of course). 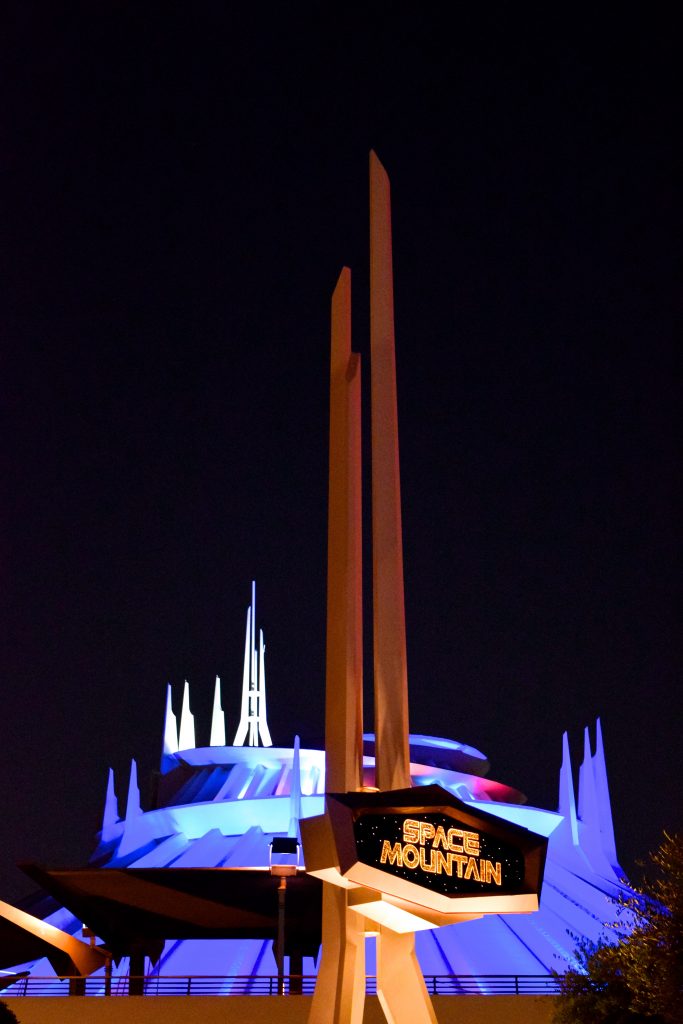 Space was temporarily closed as we walked up to it, but about 5 minutes later it re-opened. As some of the first guests entering the station post-breakdown, we were able to appreciate the fixtures sans-guest for once. 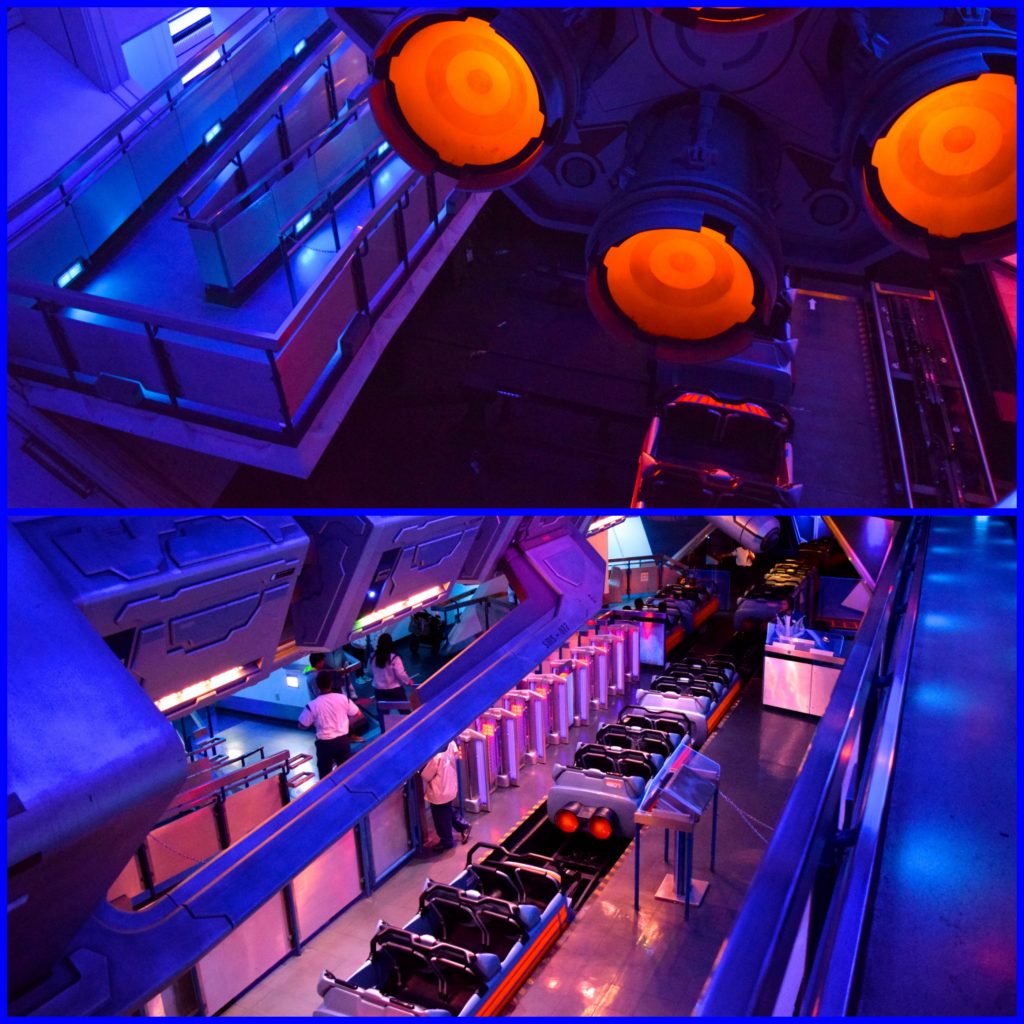 That concludes our quick Disneyland Resort Update! Stay tuned for an array of reports and articles from around the state this month, including more Guardians of the Galaxy! For now check out some of our recent CCK and CCCK posts that I know you’ll LOVE: