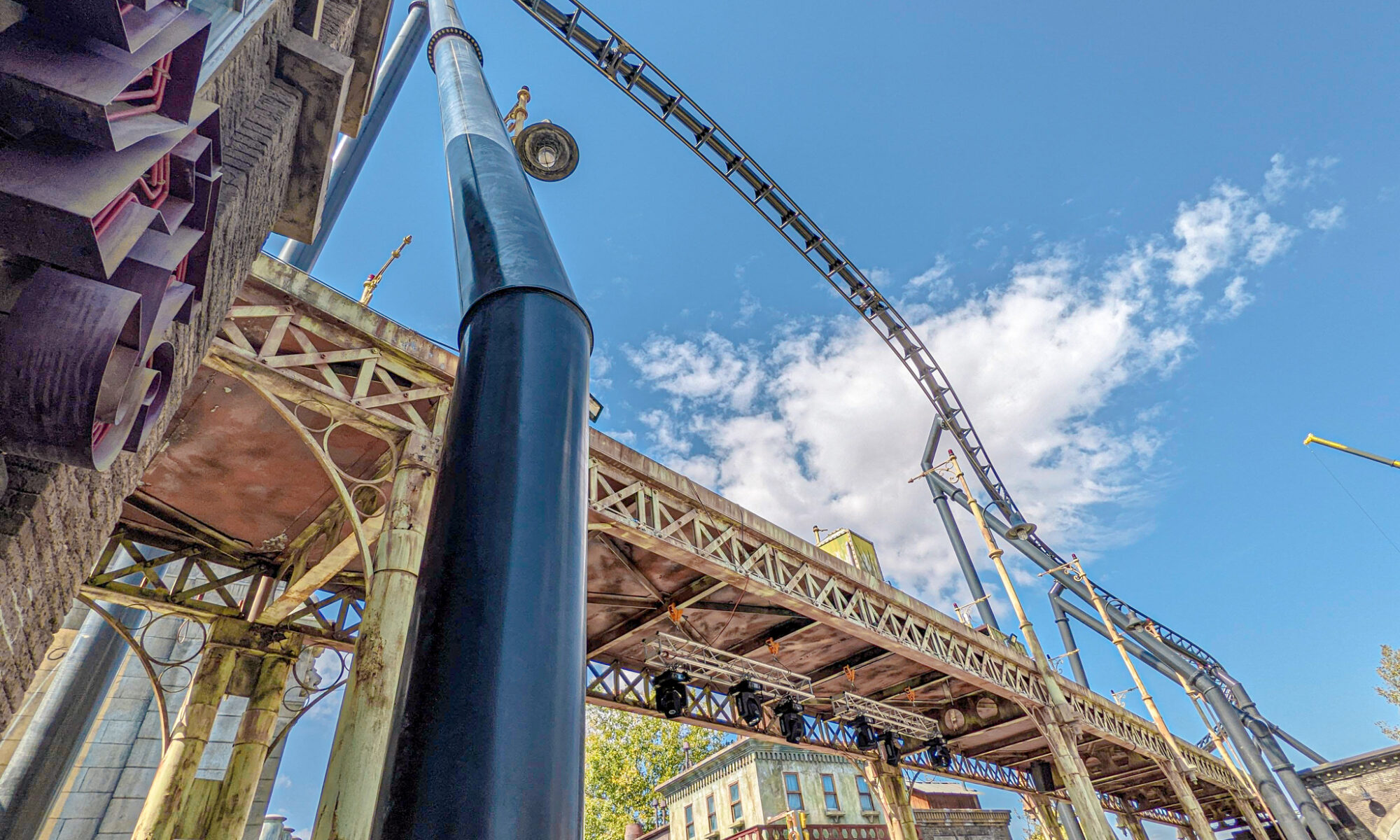 A few weeks have passed since we visited Parque Warner Madrid and provided an update on the 2023 debut of the brand-new Intamin Batman roller coaster. This enormous, VelociCoaster-sized undertaking will include numerous unique elements, inversions, airtime moments, and launches, among others. Since our last update a few weeks ago, a great deal has happened. This update will include new inversions, airtime hills, drops, and more!

This longer-than-1-kilometer Intamin roller coaster will feature at least three launches, as well as a spike, switch track, a top hat, pre-shows, and heavy theming. The coaster’s maximum height is 45 meters, but its maximum speed is unknown. The majority of the ride takes place in the park’s center, which was formerly Gotham Park and an undeveloped forest. The ride’s presence is impressive, especially considering that it is the first thing you see when entering the park’s Hollywood main street.

The station, which utilizes a portion of the infrastructure from the previous Batman motion simulator ride, is concealed behind the Gotham section of the DC Super Heroes World land. Before the first launch, which leads to a double up and corkscrew, the ride is expected to feature show scenes. The queue will utilize the queue from the previous Batman simulator ride and will feature a pre-show in what is presumably still the Batcave. The spike depicted in this image appears at the conclusion of the ride, after the final large element rapidly brings the train down into a show scene. The train will then slow down and run up the spike for a themed experience.

This double up into the corkscrew will be the first element on the roller coaster and will be suspended above a major midway at the amusement park. The steel pieces affixed beneath the track’s spine will likely be connected to nets and possibly theming.

The launch into the 45-meter-tall top hat will include themed elements and at least a few buildings that the train will fly through or under. The ride’s tallest element is the top hat, which features a 180-degree turn on the ascent. On the summit, the train will be slowed significantly – virtually to a stop. Following the beyond-vertical drop, riders will encounter the next set of elements, which are significantly lower to the ground. More on these newly-constructed elements will be provided in a later section of this update.

Let’s venture to the newly constructed track! The S-Turn that leads into the coaster’s signature Zero-G Stall will be addressed first. This S-Turn follows the ride’s third launch and will likely feature intense lateral and vertical forces en route to the taller inversion that immediately follows it. We anticipate that the intensity level will be comparable to that of the final element of VelociCoaster.

The Zero-G-Stall itself is lengthy and elevated to a considerable height. This is the second-highest point on the ride, and it towers over Gotham. The element’s supports are designed to be interwoven with the theme of the area’s iconic bridge, and the element can be seen hovering above the area from virtually any vantage point. This Zero-G-Stall is relatively flat compared to those found on other Intamin coasters, and may provide more hangtime than the others.

Undoubtedly, the drop from the Zero-G-Stall will be one of the ride’s most thrilling moments. This twisting drop will be sharp and steep and will also twist riders more than 180 degrees as it drops into a building prior to what is likely the ride’s conclusion. Images depicting the ride’s breathtaking turn as it plummets to the ground are provided below.

The below wide-angle images do an excellent job of highlighting the newly constructed airtime hill and S-turn hills!

While I was unable to be in Madrid for today’s update, I’d like to give a shout-out to our Spanish correspondent Alex Estévez (who’s been with us since 2016!) for capturing these images! The more that is constructed of this new Intamin roller coaster, the more excited we all become. 2023 at Parque Warner Madrid will be spectacular, and we cannot wait! Follow us on social media and check back here for additional Parque Warner Madrid content and construction updates!

Are you looking for a ton more construction pictures and updates, don’t miss our previous updates from earlier this month: Update One, Update Two.