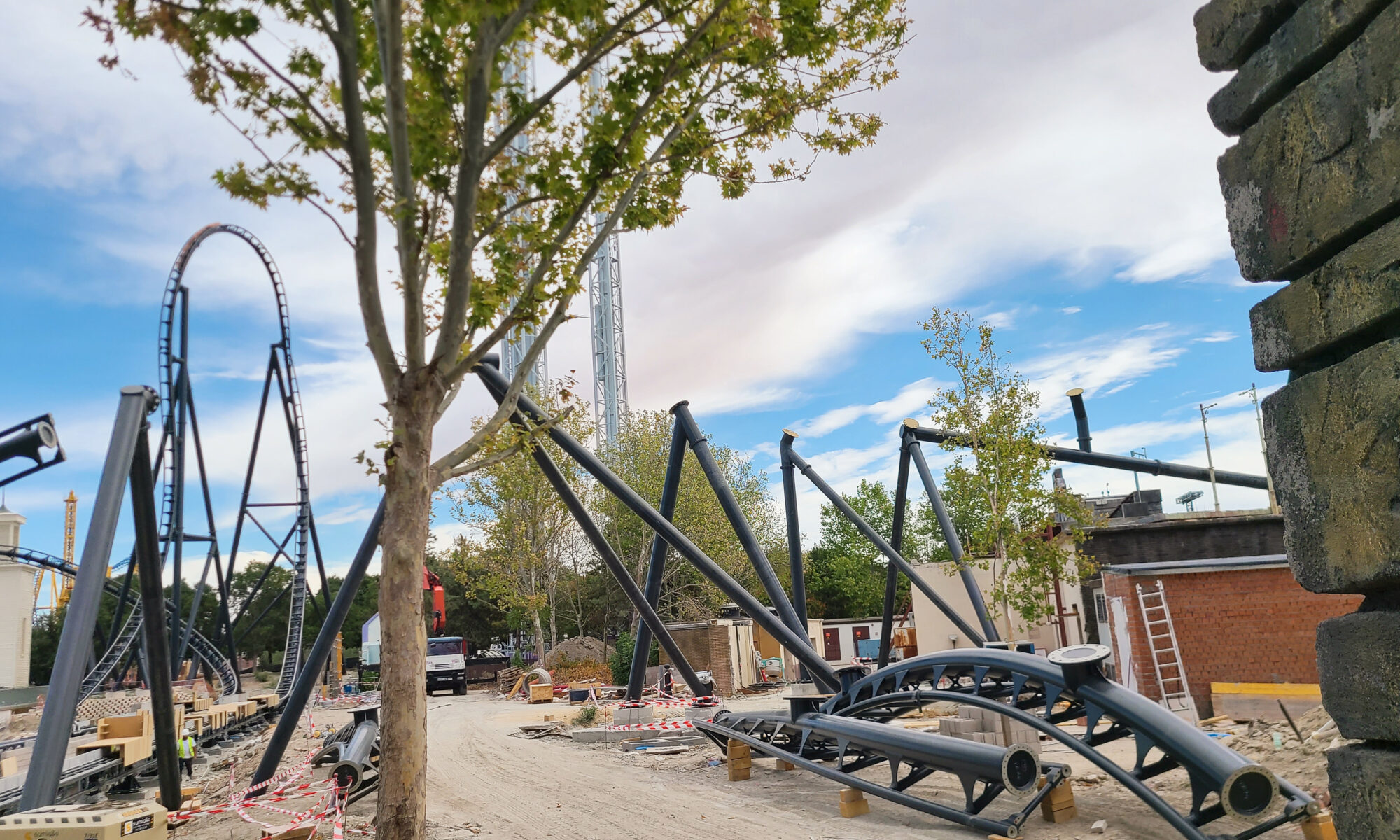 A few days ago, we traveled to Parque Warner Madrid and delivered a brand-new construction update on their new roller coaster. A few days later, we returned to take a closer look at the layout, station, construction, and more!

We’ll begin with a general overview of the coaster’s dimensions. There appears to be confusion regarding the size of this coaster. Despite being dwarfed by the tallest S&S Tower in the world (La Venganza de Enigma), the ride is still quite tall and occupies a substantial portion of the park’s land. Below, the image depicts, from left to right, the top hat, the stall, and the ride’s spike. To the left of the top hat, there will be an additional segment that has yet to go vertical. This roller coaster is proportional to the Jurassic World: VelociCoaster.

The roller coaster will be the park’s heaviest themed roller coaster and will utilize the old manor and bat cave from the previous Batman simulator ride. The previous pre-show and queue buildings are undergoing extensive renovations, and visible work is taking place inside the buildings, including the addition of new queue segments, new air conditioning systems, and more. In close proximity to the pre-show and queue buildings will be the coaster’s transfer tracks and motorized lift system for moving trains on and off the track.

The layout includes at least three (possibly four) launches. In addition, the ride will feature multiple scenes, although it is unknown what these scenes will entail. However, behind the existing Gotham City infrastructure, a variety of new buildings are being constructed to house potential dark-ride scenes and some of the launches. The relatively small first launch will lead into the double-up and corkscrew.

In the park’s DC Super Heroes World, the signature stall over Gotham City will be quite tall. As seen in a previous section of this update, the supports extend quite far above the park. Due to the park’s commitment to creating a coaster with a highly integrated theme, the support structures have been meticulously designed and constructed around existing themed elements.

In the former location of Gotham City Park, two of the ride’s launches pass each other. These two launches are currently being outfitted with LSMs to propel trains into the top hat and zero-G-stall elements.

Some track pieces were moved to the coaster’s construction site yesterday in preparation for installation. Track pieces are stored on a small storage site next to Coaster-Express.

While none of the tracks in the park’s center have unusual spine designs, the double-up exiting the first scene and into the corkscrew that follows have extended flat plates protruding from the track’s spine. This track crosses a major midway and passes close to the entrance of the ride. It may be used for netting or themed pieces that will attach to the track.

Here is a closer glance at some of the already installed tracks, including some transitional turns. You’ll also find an image of the footer preparation work for the portion of the ride that will take place behind Cartoon Village and Wild West Territory.

We will conclude by taking a closer look at the new roller coaster’s signature top hat element, which towers over the Hollywood Market near the park’s entrance. The 147.6-foot-tall top hat will feature a 180-degree twisting incline and a drop that’s beyond vertical!

Originally, construction on this approximately 50-meter-tall new Intamin roller coaster was scheduled to begin in November of this year; however, the amusement park appears eager to have the ride operational for next season, and thus construction is well underway. The coaster is expected to debut in 2023, despite the fact that a significant portion of the ride is still being constructed in the vicinity of Cartoon Village and Wild West Territory. According to rumors, this will not be the only new coaster added to the park in the near future, with a mine train coaster possibly joining the Wild West Territory lineup. Full speed ahead for Madrid’s Parque Warner!

If you have not yet read our previous major construction update from a few days ago, please do so here!