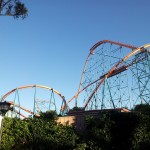 Pretty much every coaster includes drops. Some are hardly considered drops, and some have riders fall out of the sky hundreds of feet. In addition there are quite some types of drops. We’ve decided to bring you the 5 best drops in California, from twisted drops, to those that invert riders, the state of California has a great coaster collection, and thus a great collection of thrilling and unique drops!

How could we possibly exclude the world’s longest enclosed initial descent from our list? We couldn’t. The best woodie in California, located at California’s Great America has a great drop to start off the madness with a sizable 103 foot drop through an enclosed tunnel. It provides a very neat sensation in the front row due to the tunnel, and some great sustained airtime in the back. The uniqueness of the drop combined with the forces it provides secured Gold Striker a spot on this list! 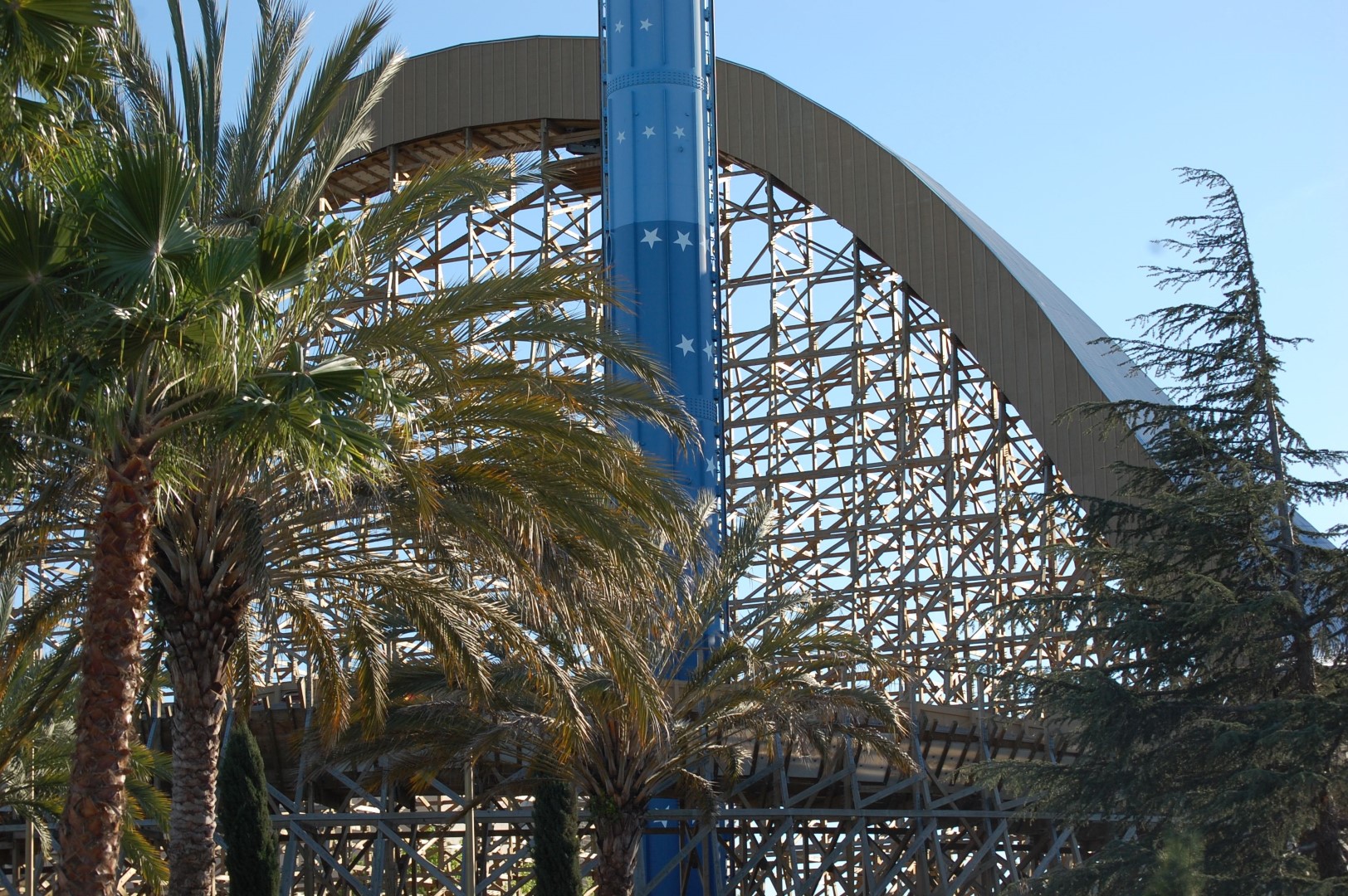 Xcelerator opened in 2002 at Knott’s Berry Farm and is considered the coaster that allowed for monsters such as Top Thrill Dragster and Kingda Ka to be created. A 200 ft drop at 90′ degrees sounds worthy enough on its own, but stats are not the only thing Xcelerator’s drop has going for it. Coming just after an intense 82 mile per hour launch, riders rise up, completely vertical, into the Top Hat where they then twist 90′ degrees to the right and reach the top, while the train is cresting it, riders experience some sweet and sustained airtime which continues until after dropping vertically for some time, the track swiftly twists back 90′ degrees to the right, providing some great laterals. Xcelerator not only has impressive stats, but the forces to back them up. 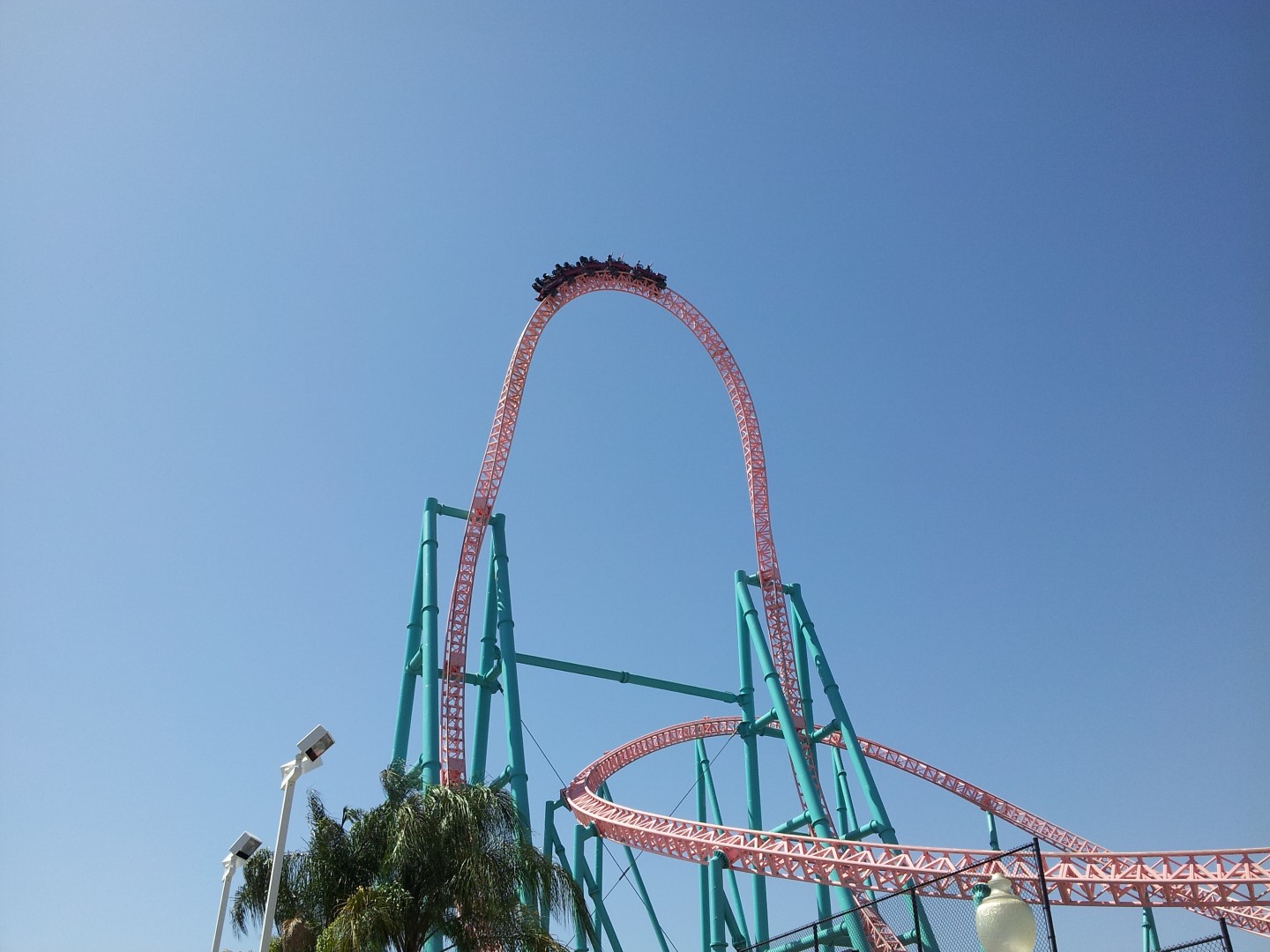 Goliath at Six Flags Magic Mountain is famous for its first drop and rightfully so. At a height of 235 ft, riders inch over the lift hill as the suspense builds, and peer down only to see a tiny sliver in the earth. As the train finally makes its way off the lift, it begins to pick up speed for what seems like an eternity, until riders are swallowed by the earth as they descend into a 20 ft deep tunnel providing some sweet head-choppers. This is where the train reaches its maximum speed of 85 mph, and the extra 20 ft deep tunnel makes the total descent 255 ft, one of the largest in the world! Impressive to say the least. 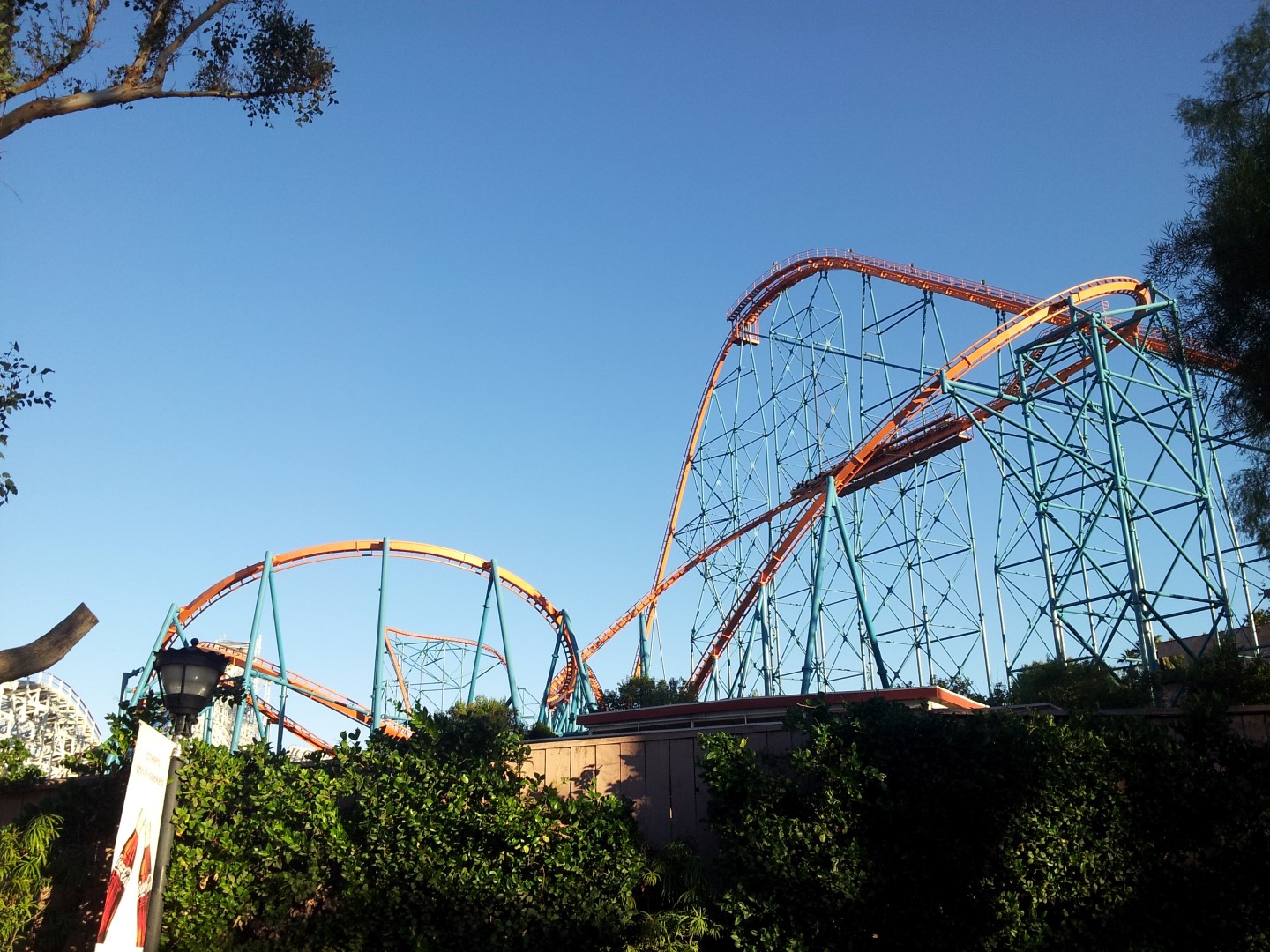 This coaster brought fame to Six Flags Discovery Kingdom in many ways. Just like a lot of the elements on the ride, the drop following the In-Line Twist is simply amazing. The drop is about a 130 feet tall, completely vertical, and twists a 180′ degrees. There’s not a single second in the drop, no where in the train, that guests sit in their seats. They’re literally ejected out of their seat due to the tight  descent into the drop. The drop is quick and 90′ degrees vertical, so riders remain ejected for almost the entirety of the drop. If that wasn’t crazy enough, the bottom of the drop is very tight and there are some very intense G’s pushing riders in their seats before flying into the non-inverting loop! 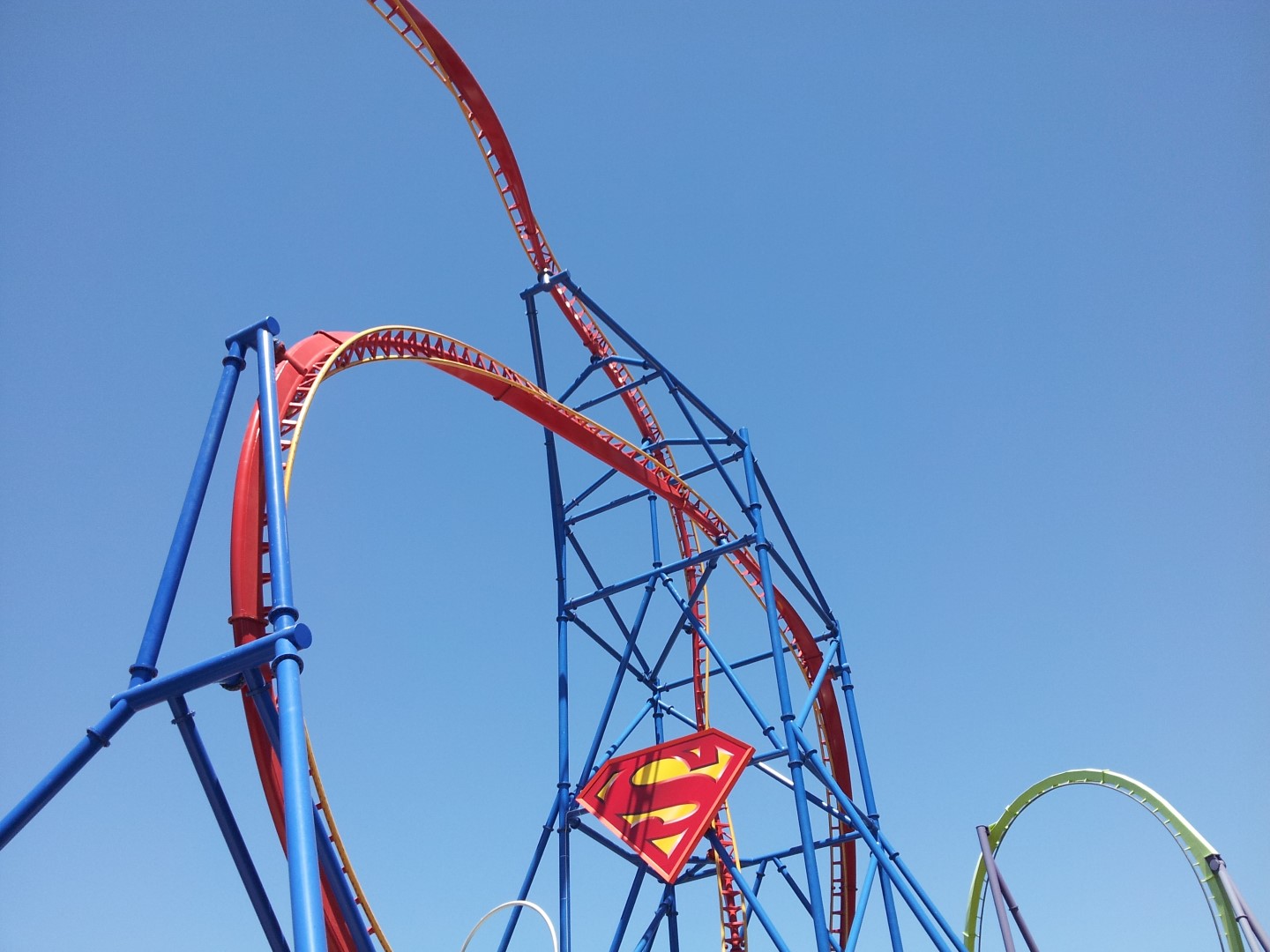 X2 is widely regarded as one of the most intense coasters out there, it even placed first in last year’s CCK California TOP 50. It’s capability to move within ‘four dimensions’ is a ludicrous concept, that makes for one of the most unique inversions imaginable. On X2’s first drop, riders are rotated to face straight down while plummeting 215 feet at an 89? degree angle. However, when the train gets close to the bottom, the seats rotate even further completely inverting riders. For riders in the front few cars the flip is smooth and scenic, those in the back of the train will be flipped upside down forcefully, very quickly. It is very disorienting and intense, perfectly foreshadowing the rest of the ride on X2. Not to mention, this is done at the ride’s top speed 76 miles per hour, making it one of the most intense experiences in the world! 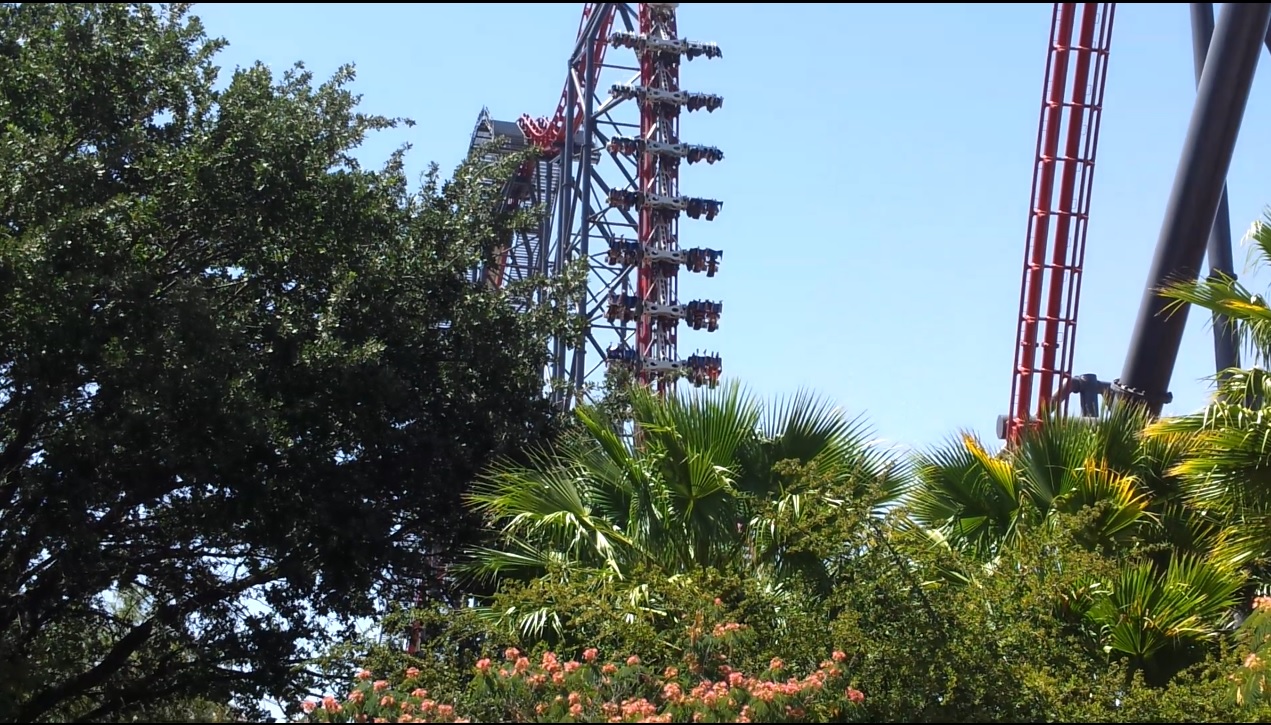 What’s your favorite drop on a coaster in California? Comment below!

Here is a list with the 5 best inversions in California!

6 Replies to “The 5 Best Drops in California”