Sean: As I had the day off and woke up late, I decided my day was best spent at Six Flags Magic Mountain’s July 4th Fest. I was looking forward to enjoying the atmosphere, get some rides in, and of course stay for the fireworks. Needless to say I rode Viper a couple of times. For those following along on instagram, thanks! For those who did not, here’s a report!

The New Revolution, or as it is currently called “Classic Revolution” has reopened. The ride is currently only running one train. The reason for the long downtime was unknown, but I am glad to see it back open! 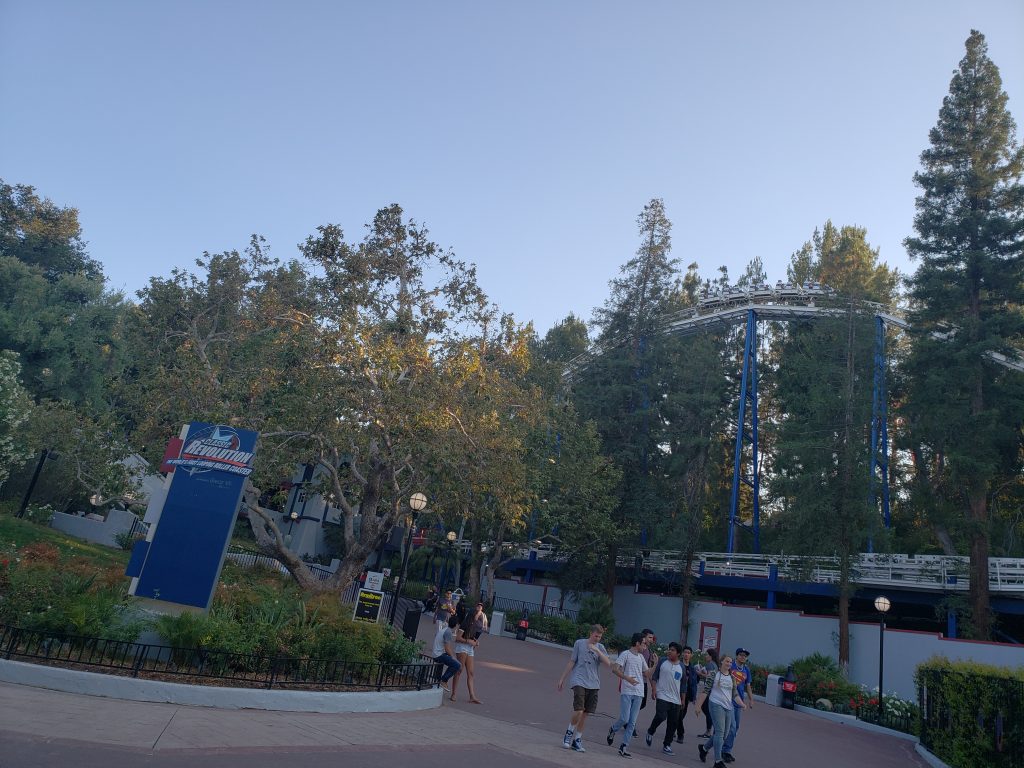 You may have seen the new park maps already, but for those that haven’t the park has officially made it clear that Cyclone Bay is going to be closed for an extended period of time for the transformation into a new area for the 2019 season. 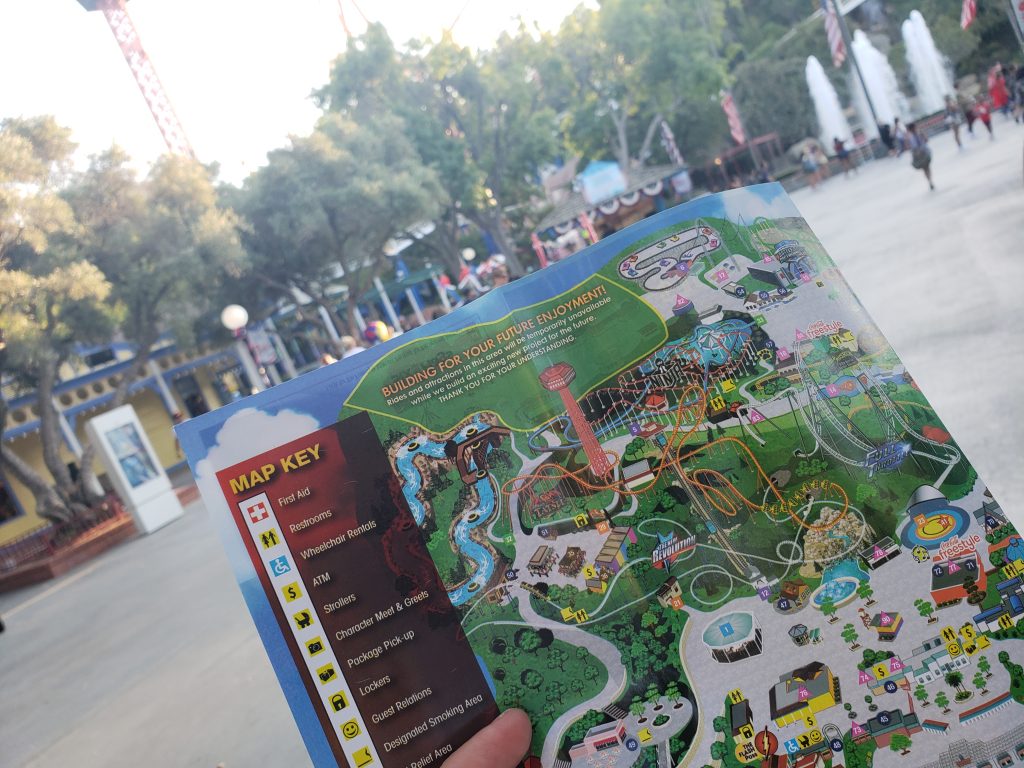 Lots of rumors are making the rounds, particularly after a French documentary about Mack Rides showed a segment where the famous German manufacturer mentioned that certain track pieces were for California. The most likely park being Six Flags Magic Mountain, which looks like it will be expanding with a very big new attraction. Perhaps it is indeed a Mack coaster, a hyper or a spinner. Only time will tell. The Six Flags Announcements are later this summer! 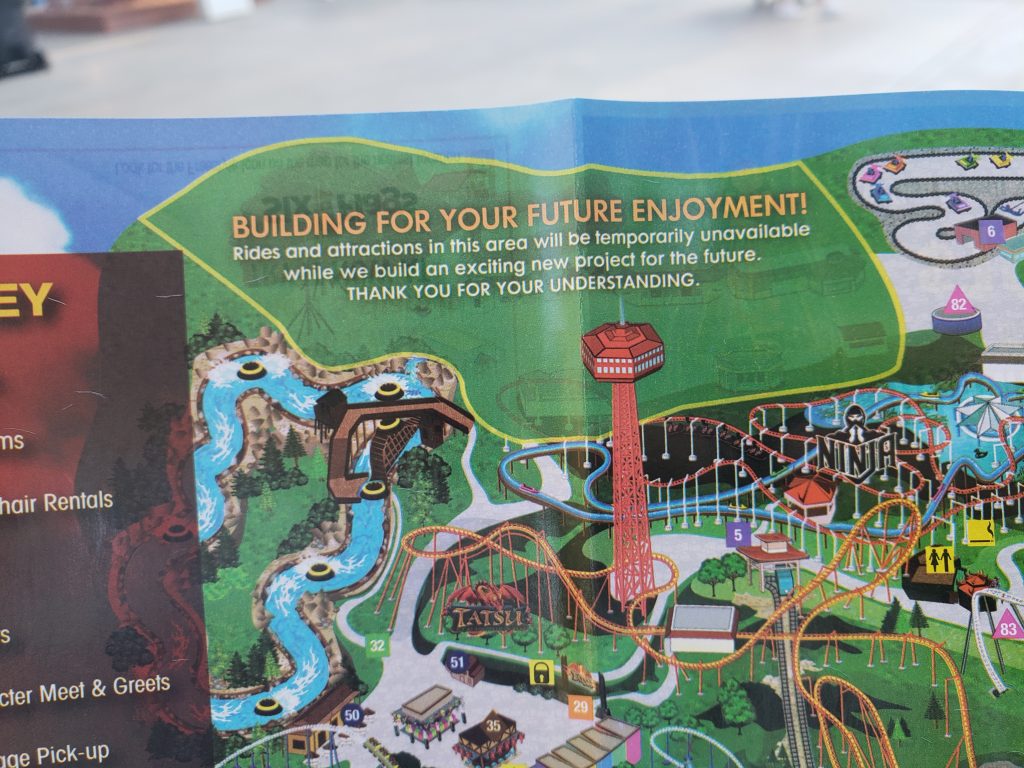 Let’s head over to Cyclone Bay while we still can. Oh hey Ninja! 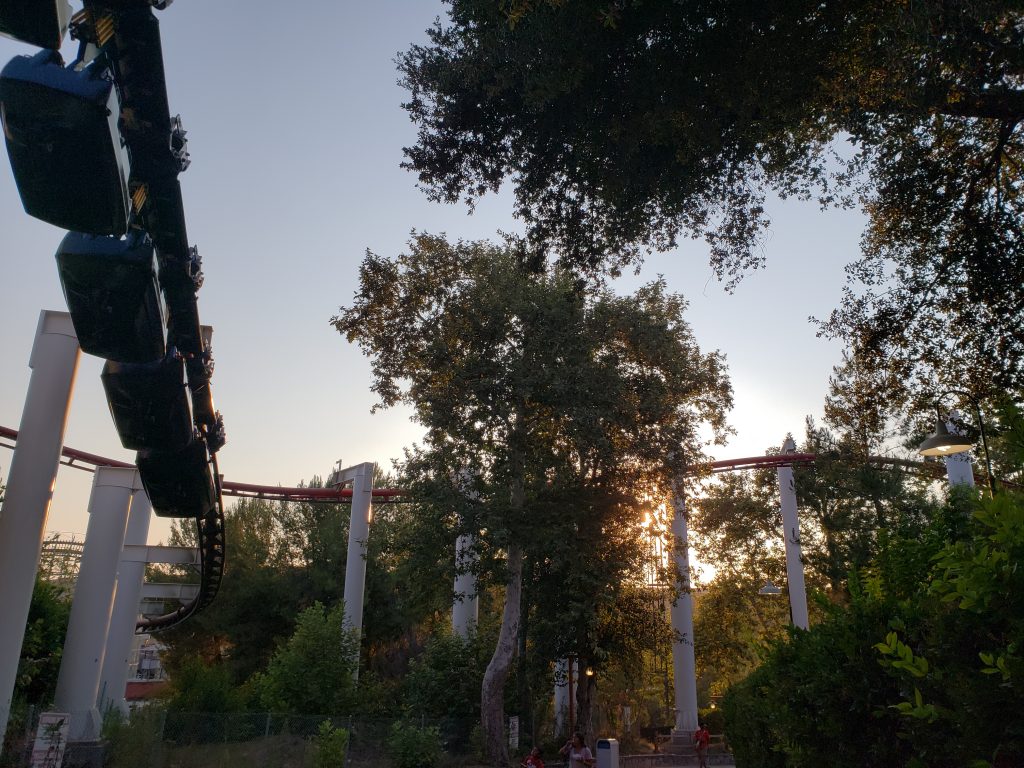 Cyclone Bay felt dead again today. Just a few days ago I saw the Epic Rides store open, but that again is closed. 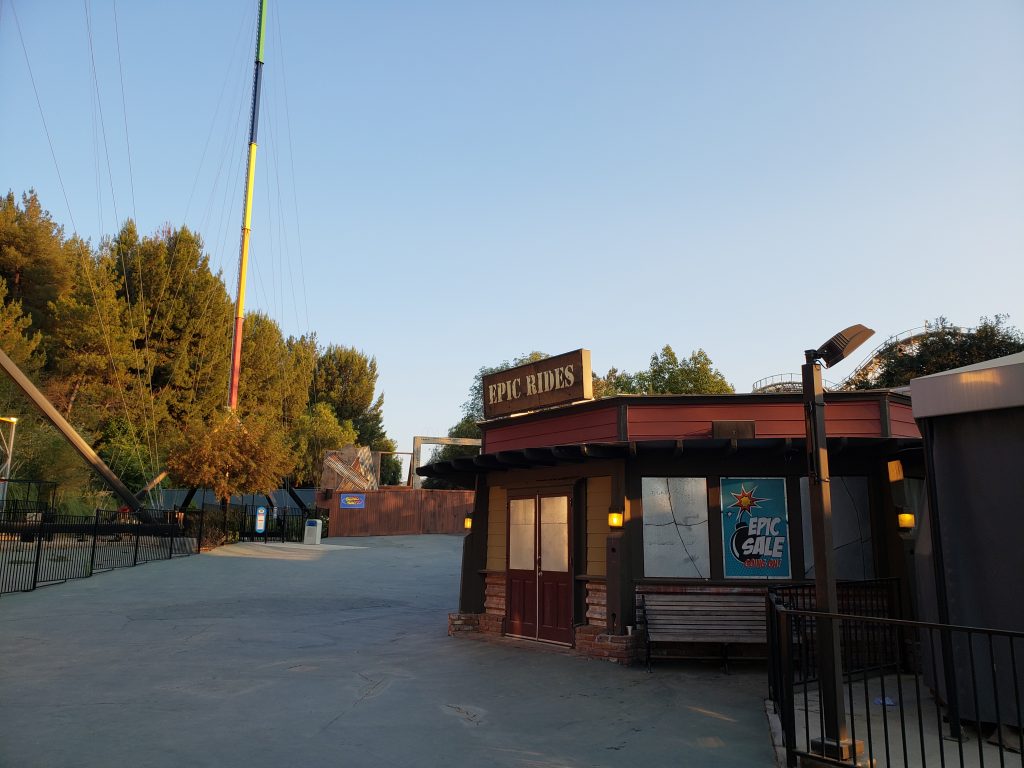 The park hasn’t announced what day the area will be closing, but with the All-American Food Festival ending today (July 4th), I bet the closure of the area will not be much longer. 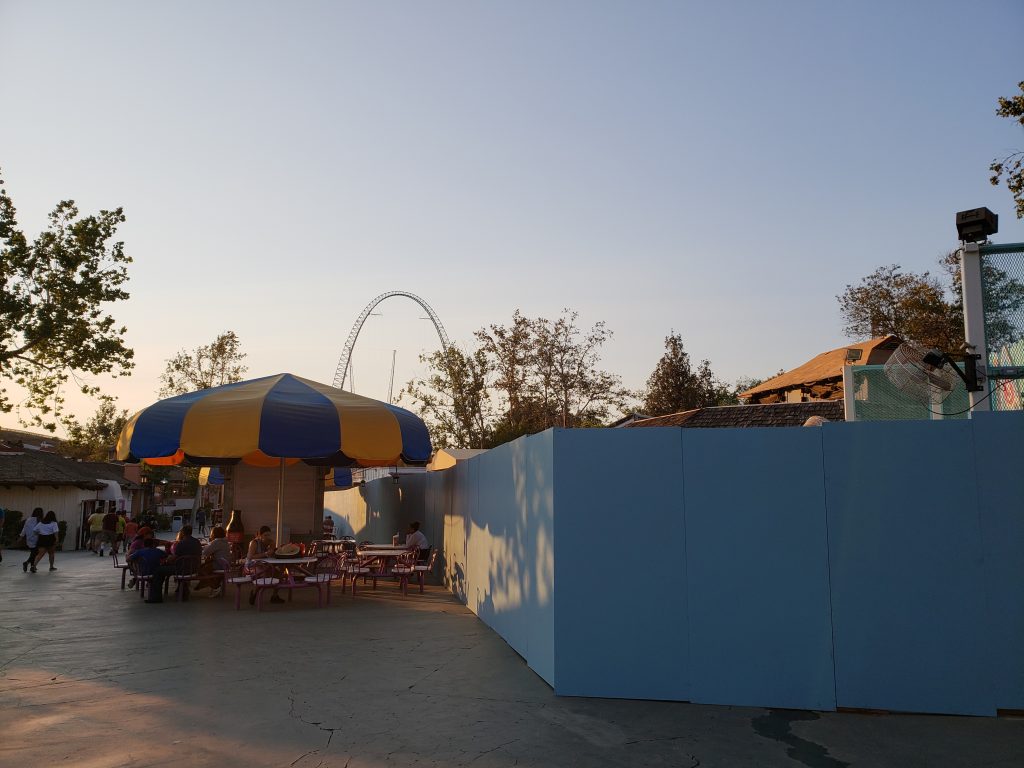 I used my time wisely to ride Apocalypse. I have seen it down ,more than operating in the last year or two, and since it will again be down in the near future for the 2019 project, I made sure to give it a ride. 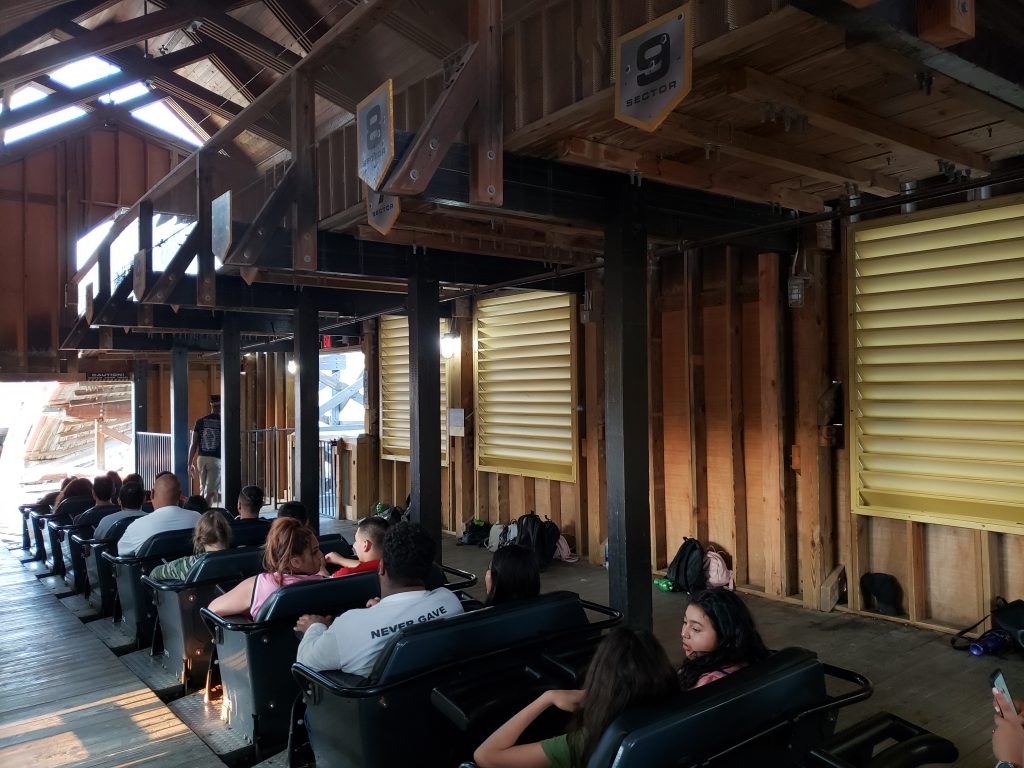 To my surprise it was running fantastically well. I had a very smooth enjoyable ride on it and couldn’t wait to reride. I am not sure if they are going to retheme or touch the ride when the whole area is closed. But they have a nice ride to work with and am curious to see what they would do. 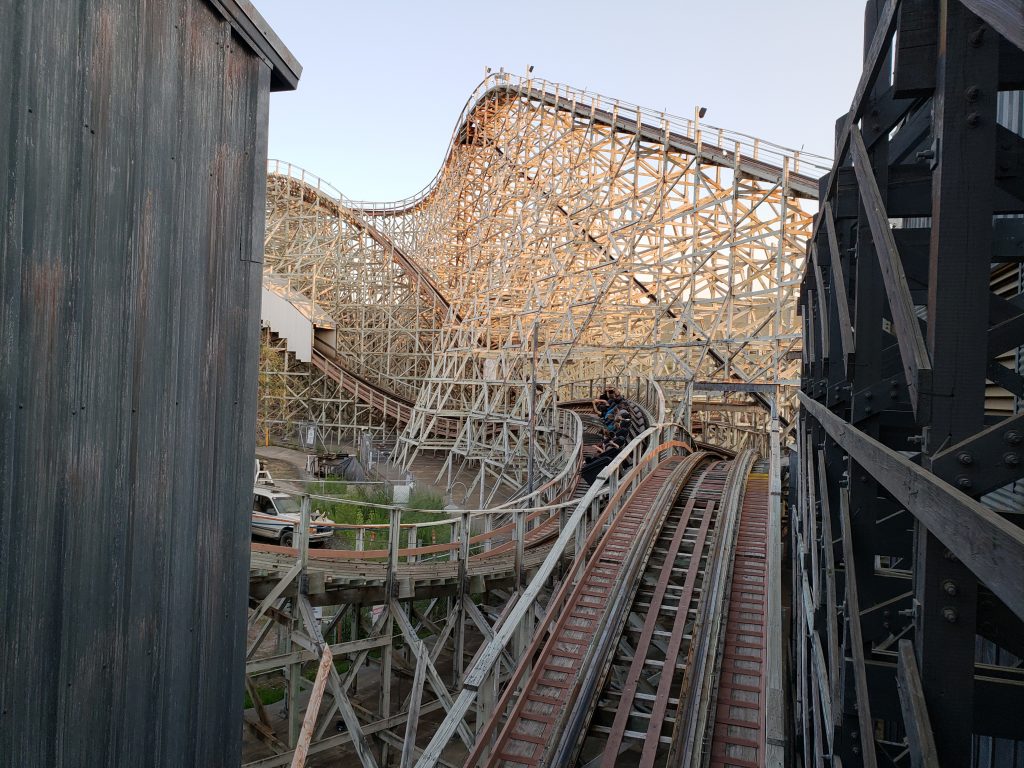 No recent Six Flags Magic Mountain Update would be complete without some Boardwalk construction! Scrambler’s new colors look awesome at night. Also glad to always see a line for this ride. 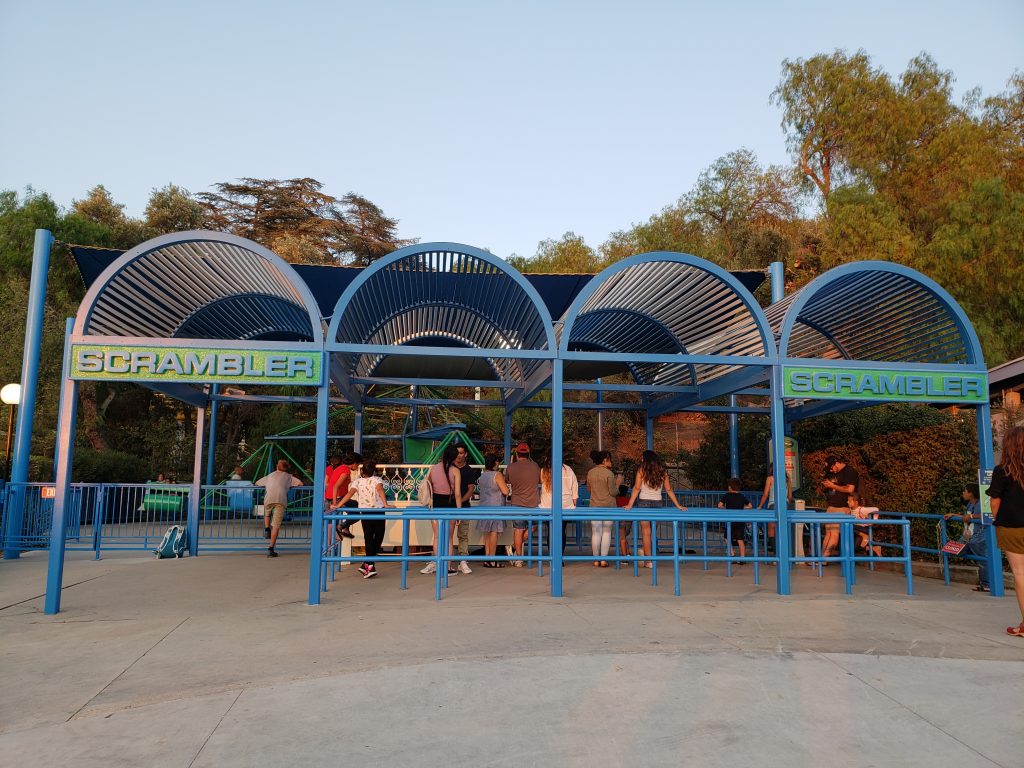 The most exciting thing is the fact that the walls are all gone and we can now see how amazing Jammin’ Bumpers look! 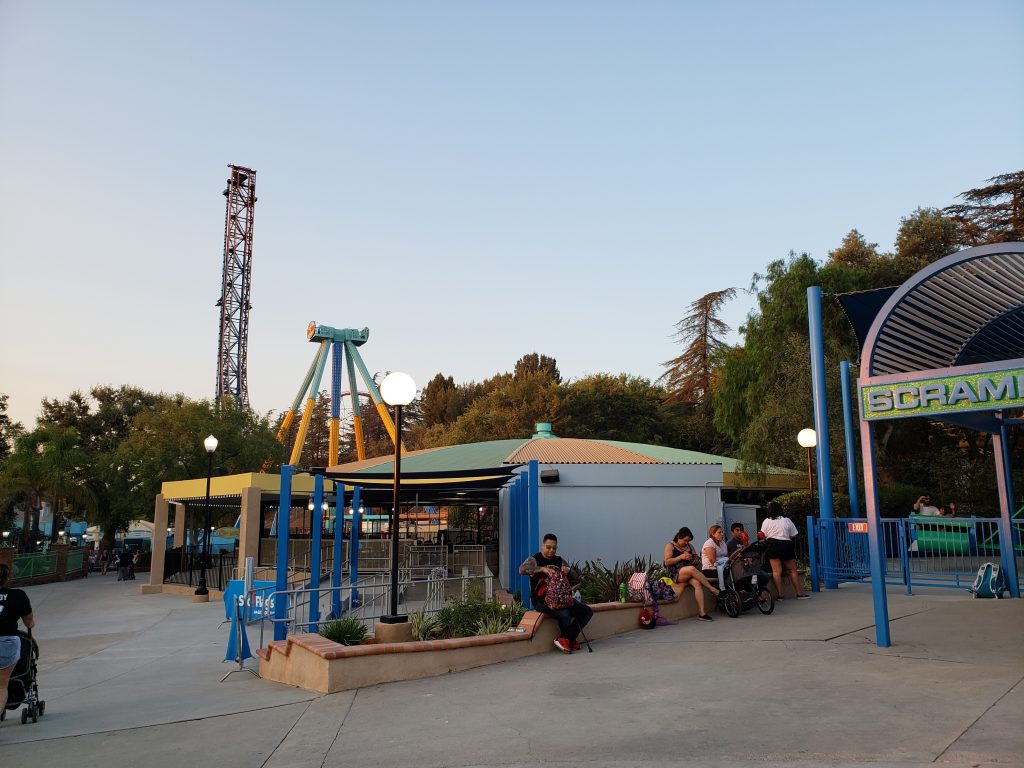 Jammin’ Bumpers looks very clean, love the little awnings over the queue and the colors they went with. 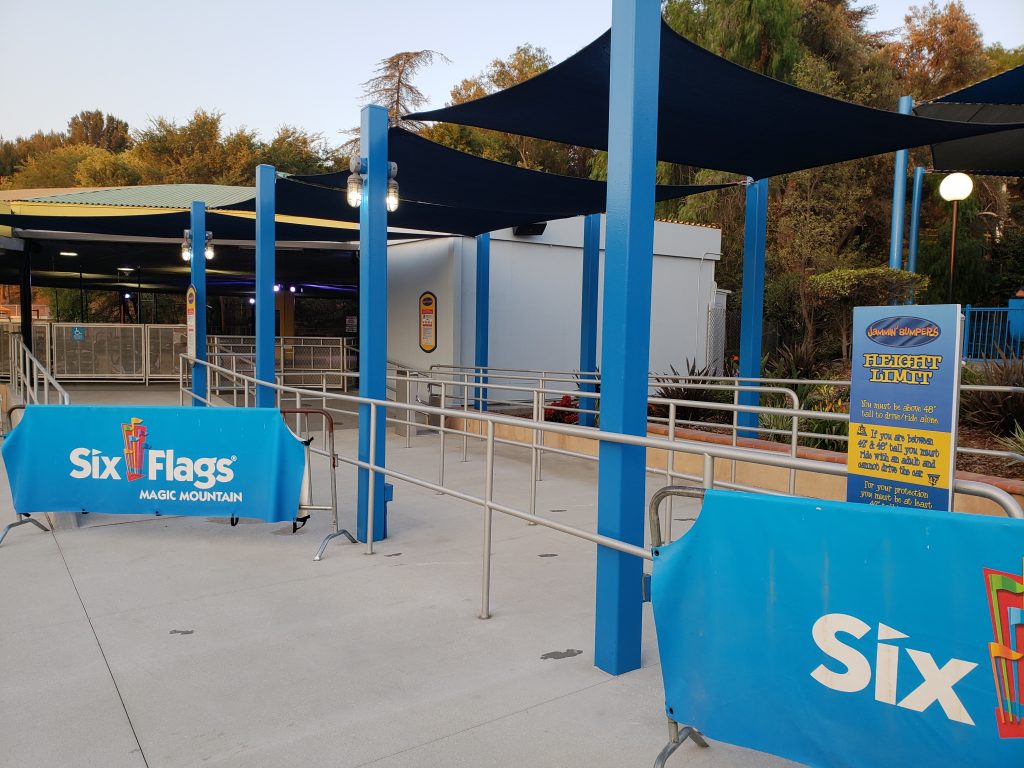 The inside of the ride has all the new ride vehicles, the newly replaced wiring/roof, and a lot of LED lights for the light shows it will feature. 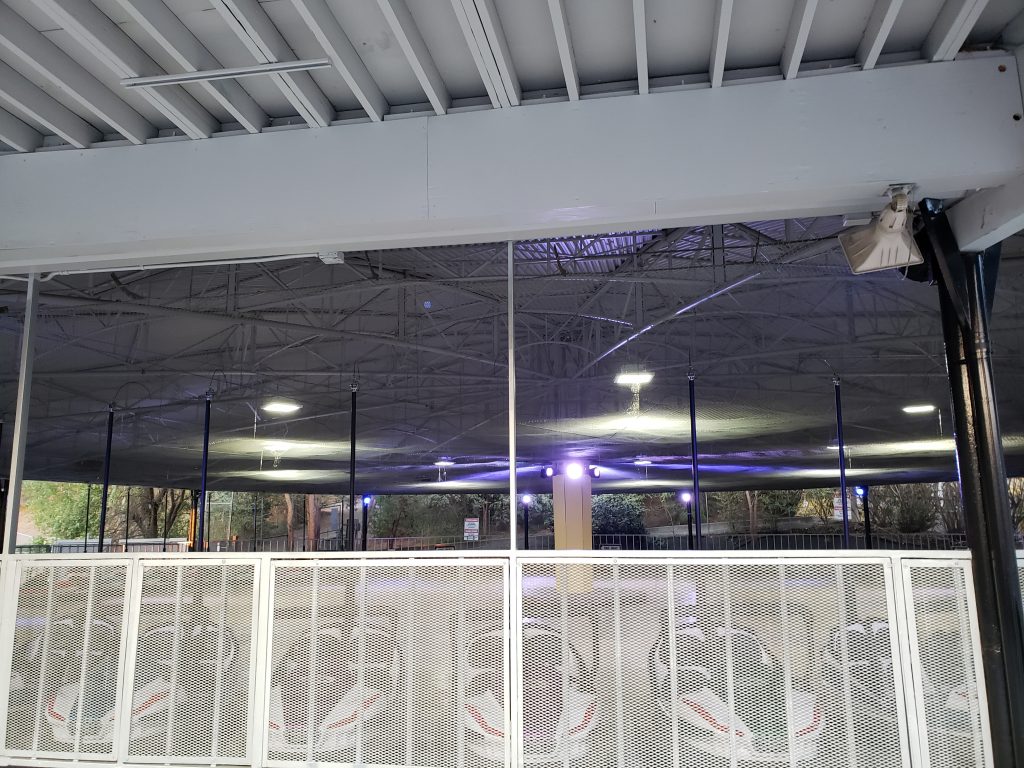 The new bystander space is awesome. I do hope they will add some benches here so guests get to enjoy the atmosphere. 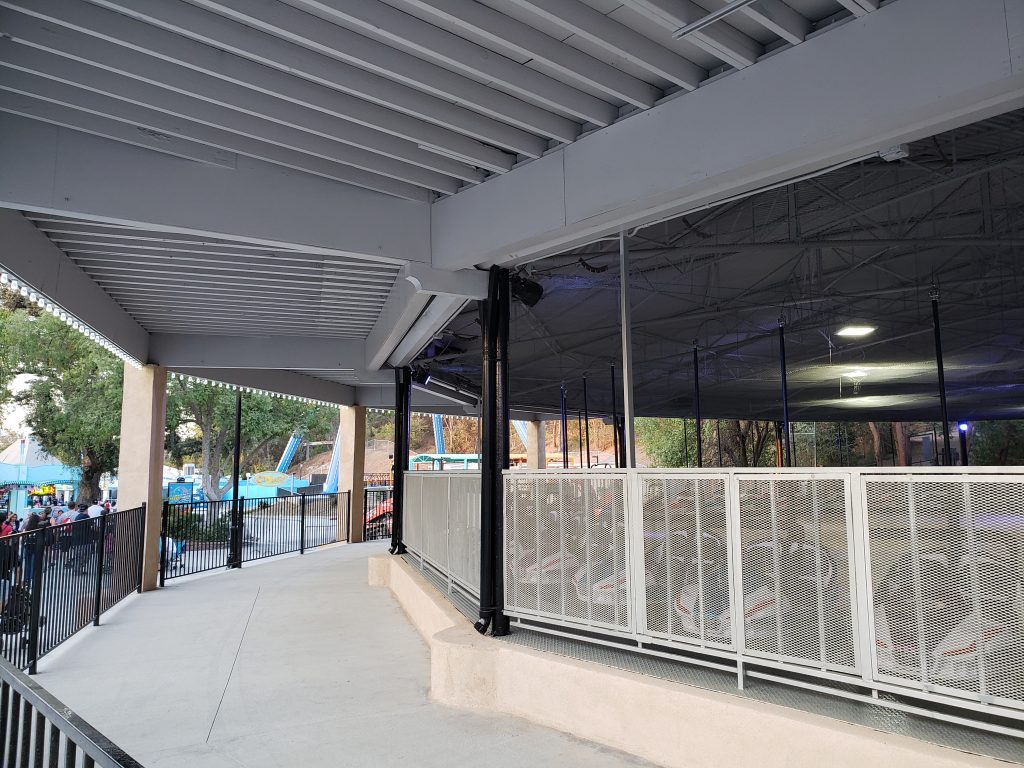 I am not sure when exactly this will open, but with CraZanity opening next week I know it can’t take much longer! 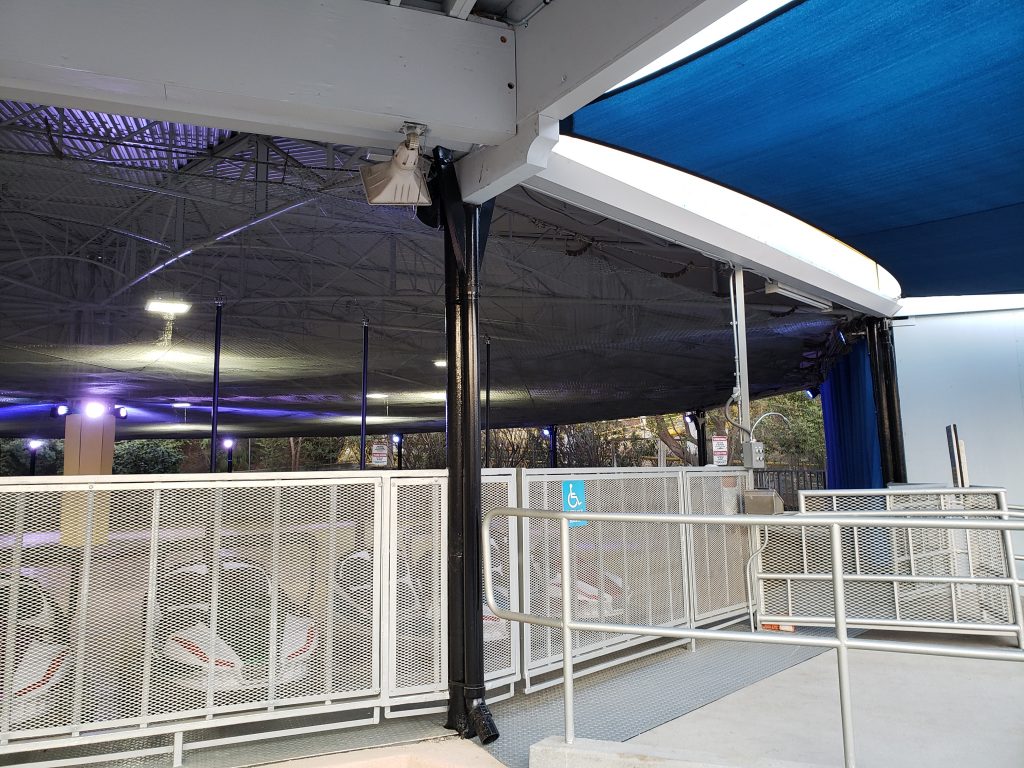 Speaking of CraZanity, let’s take a look at the progress being made on the queue, landscaping, and midway! Currently the park is adding the wooden wall that will be adjacent to the ride. Which will be painted blue, if I’m not mistaken! 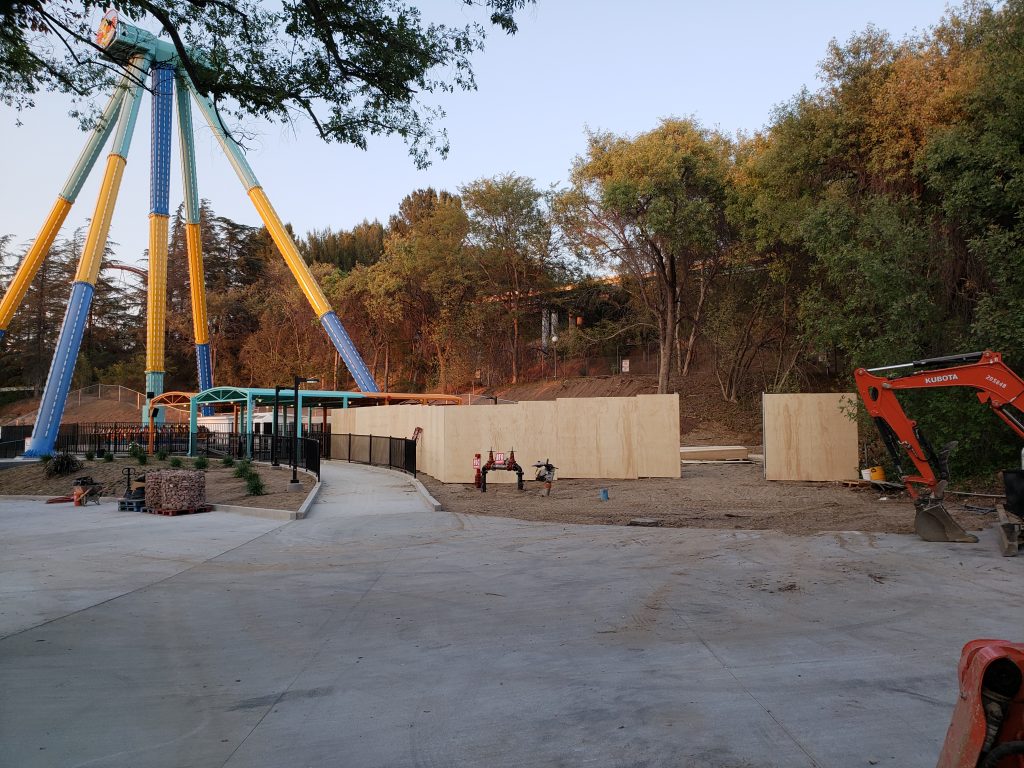 I am not sure if we are going to see an additional marquee over the ride entrance here, but it sure would look nice! The ride concepts did call for it! 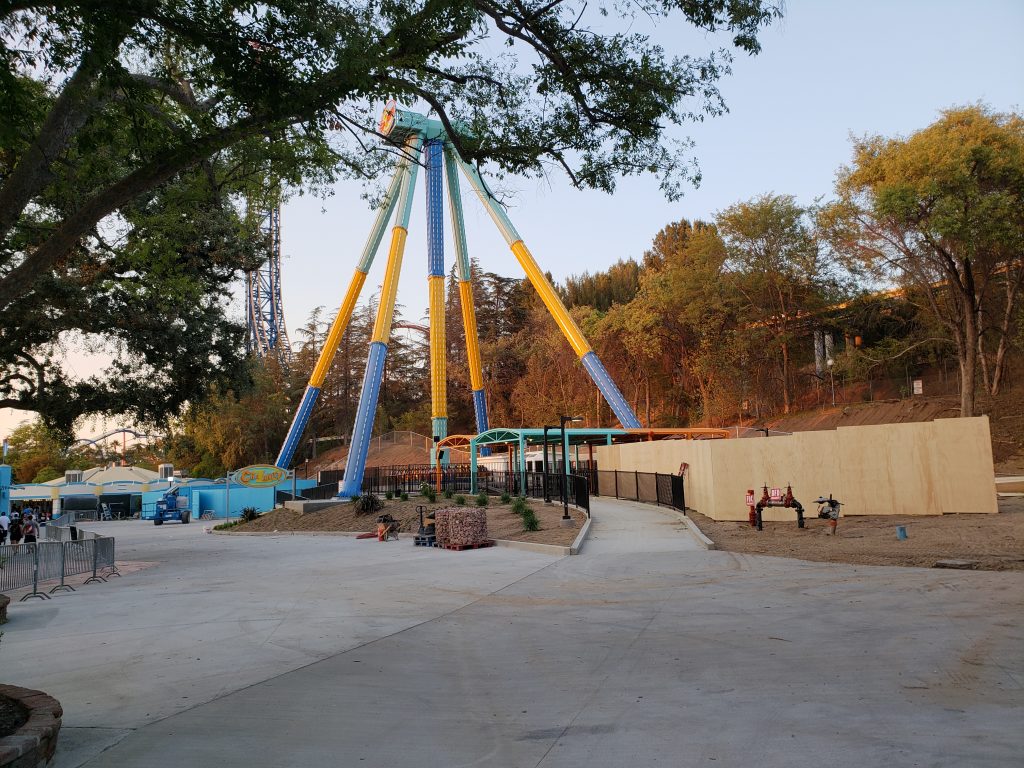 I think CraZanity is a beautiful addition to the area. Having said that the midway includes a lot of concrete. I hope they manage to keep it from feeling that way. 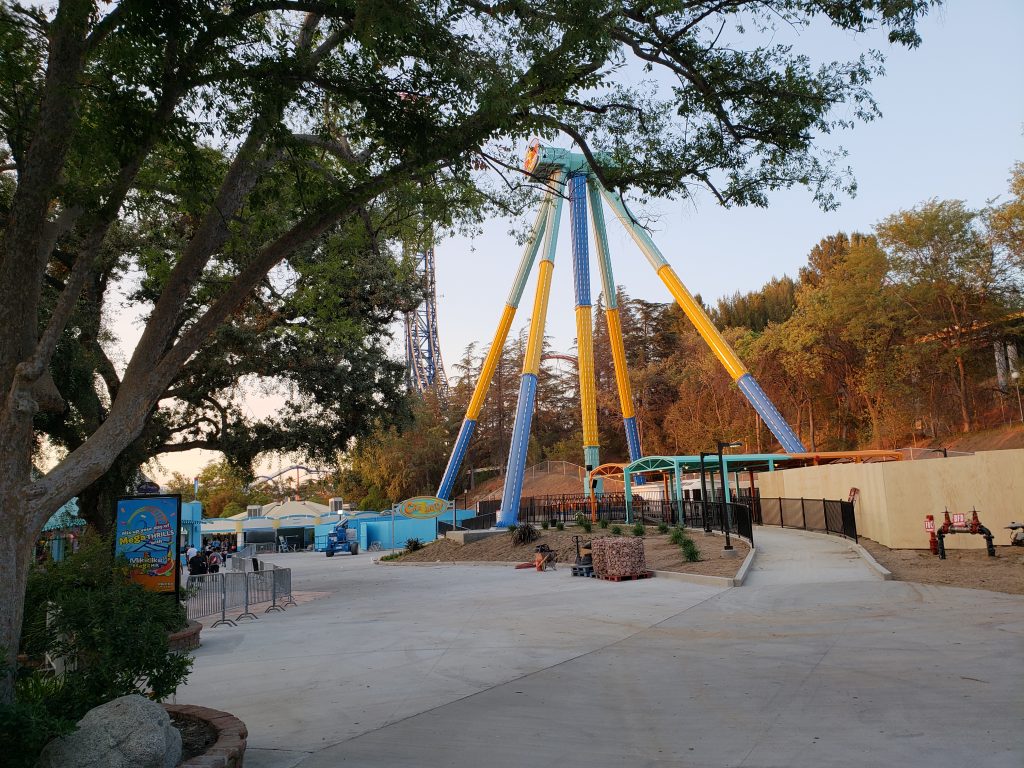 BUT LOOK AT THAT! It’s rocks! Rocks for landscaping! 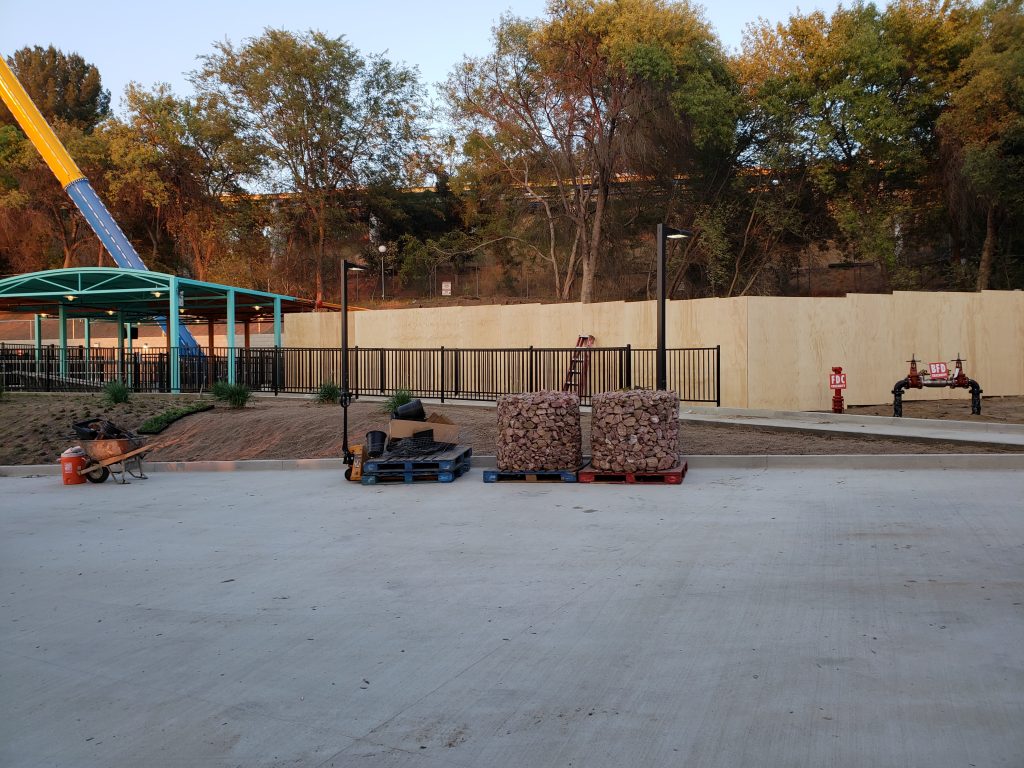 The park has started to add plants and flowers to landscape the side of the hill. I hope they at some point plant small trees that will grow to provide shade and hide the ride a bit. I think that would look phenomenal. 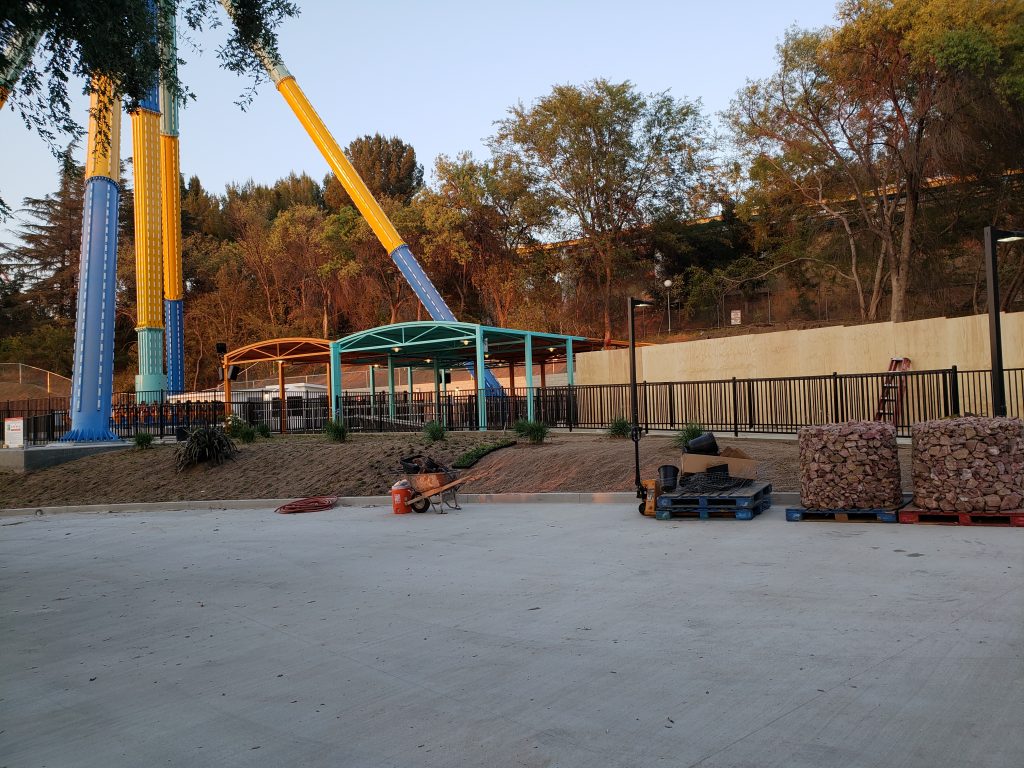 The new Boardwalk is coming together quickly! The new colors and beach tones are turning this into one of my favorite areas of the park! 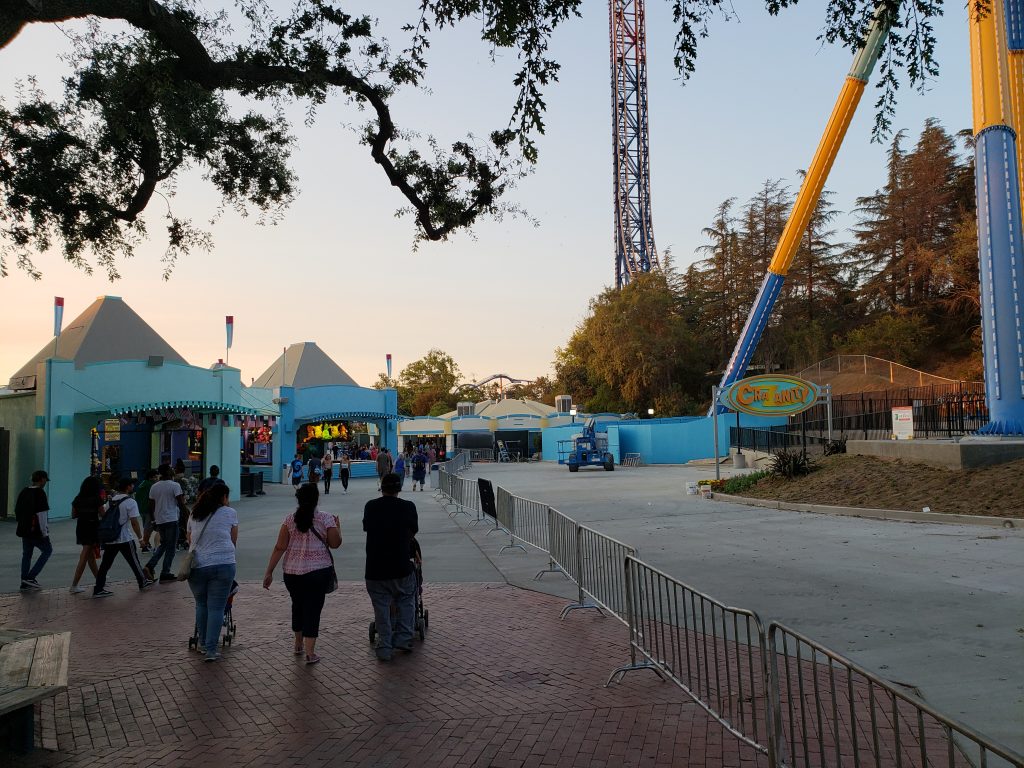 Here’s a closer look at the queue house, the landscaping that is being added, as well as the CraZanity midway sign! 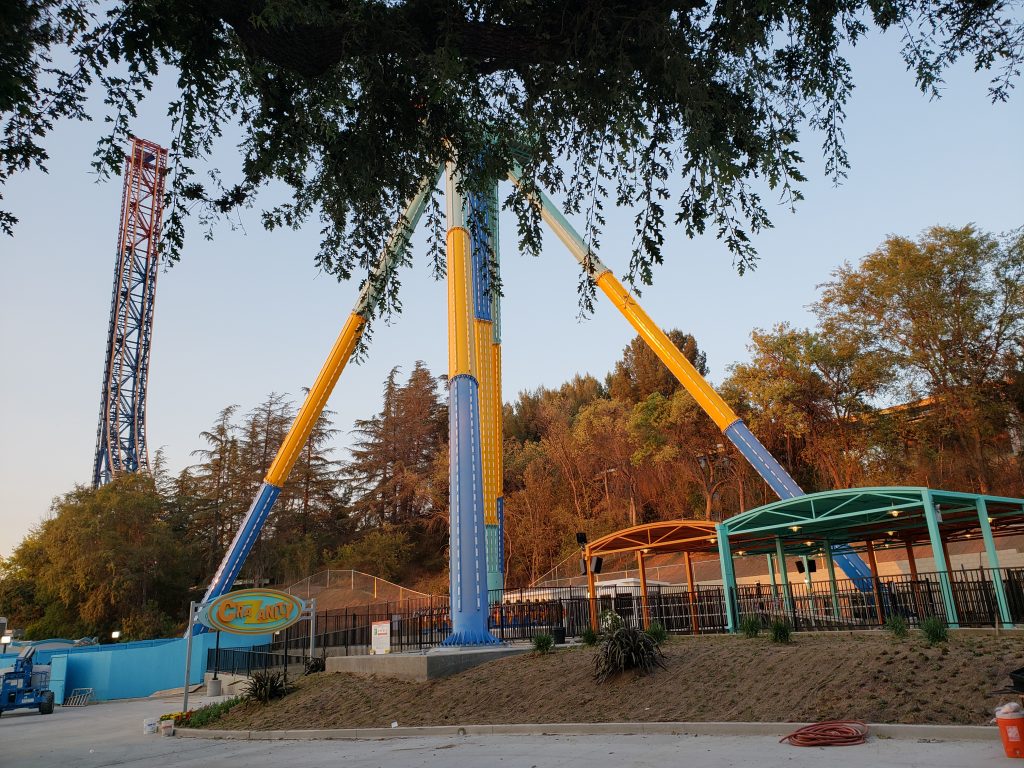 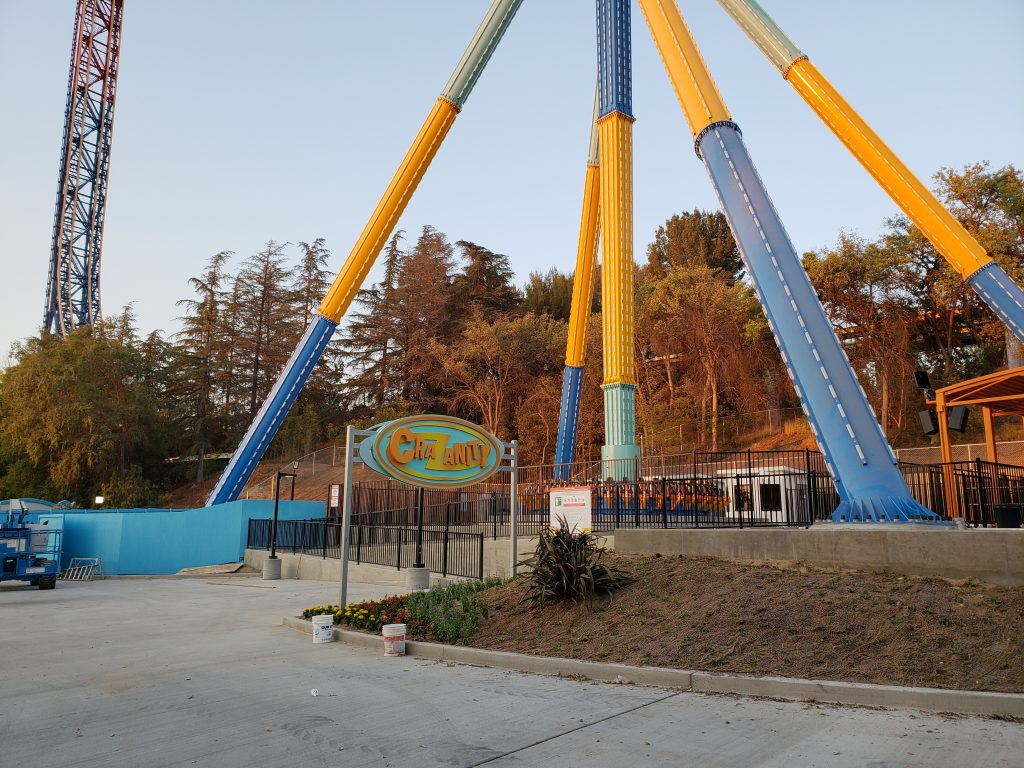 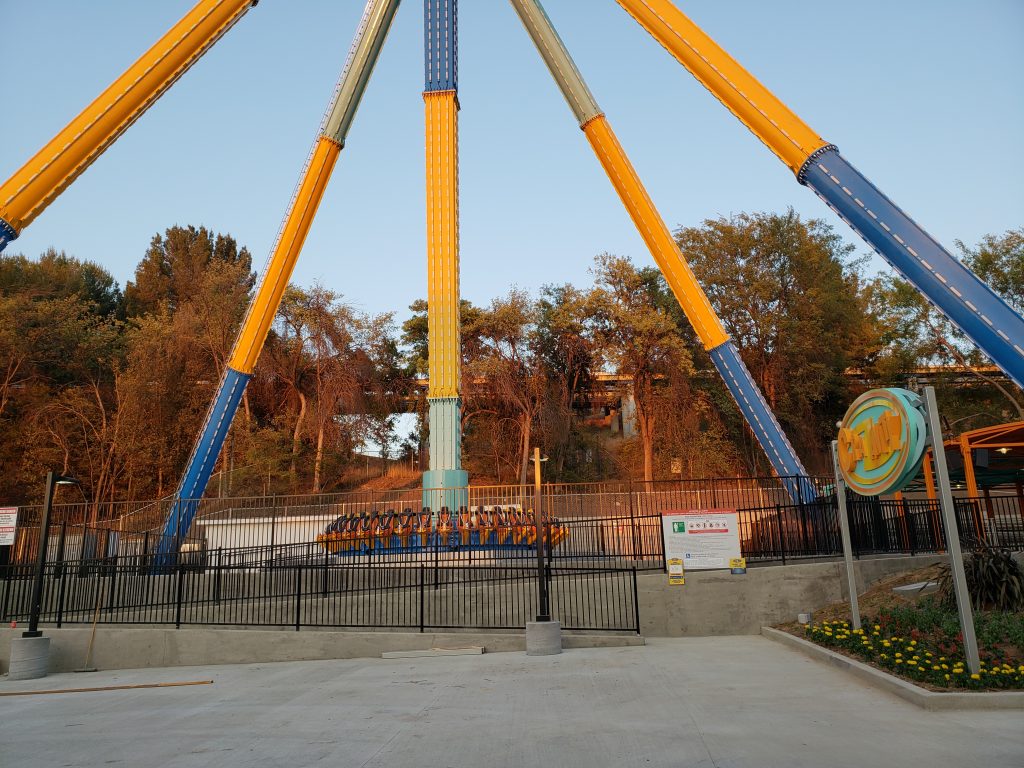 Overall the ride looks nice, clean, has fun colors and I think it’s a great use of the space here. Very excited to see the ride in action and the area crowded with thrillseekers! 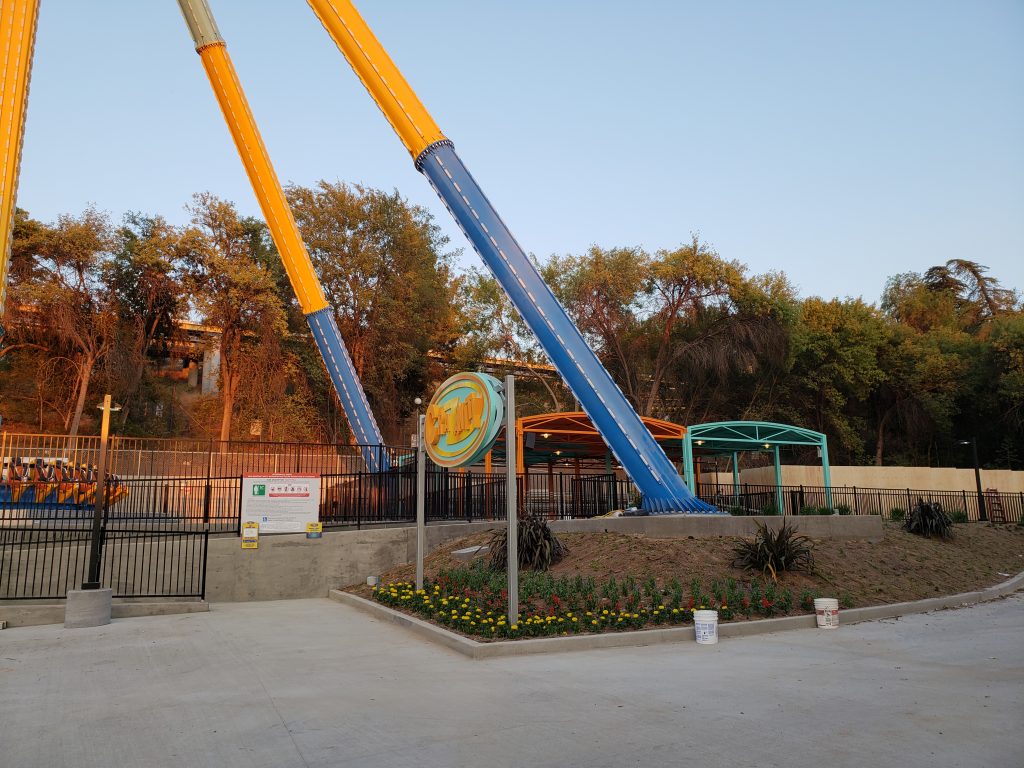 During one of the construction tours we were told that they would add the Basketball Hoops game to the midway in front of the ride, not sure if that is still the plan, but they certainly have room for it! 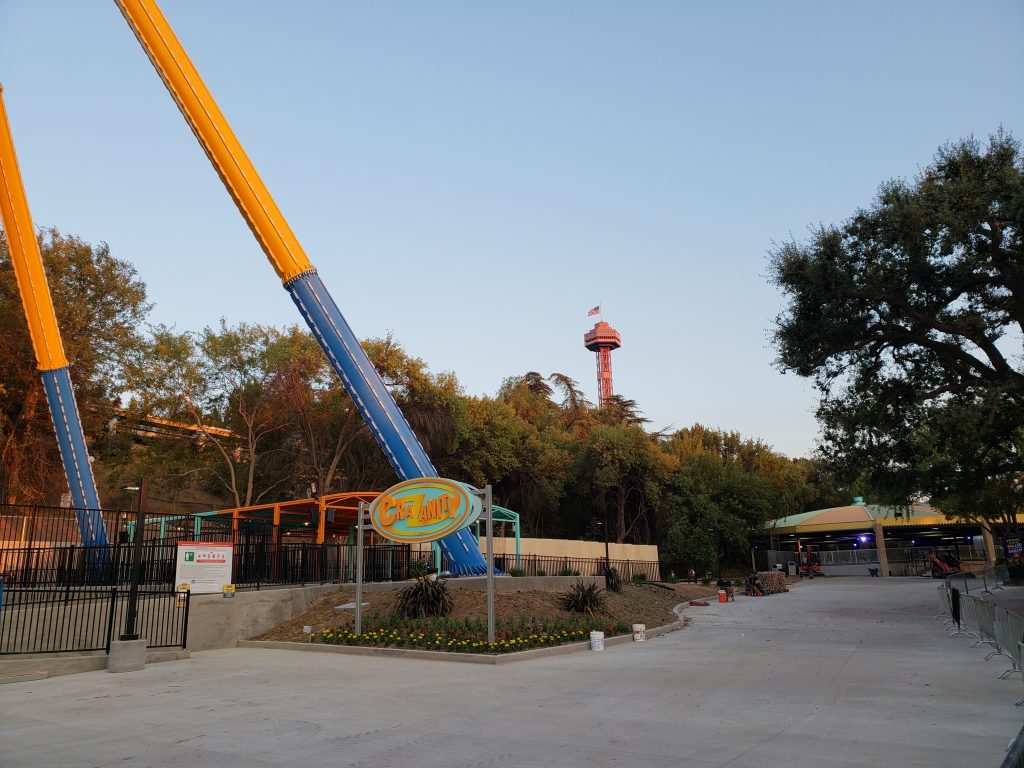 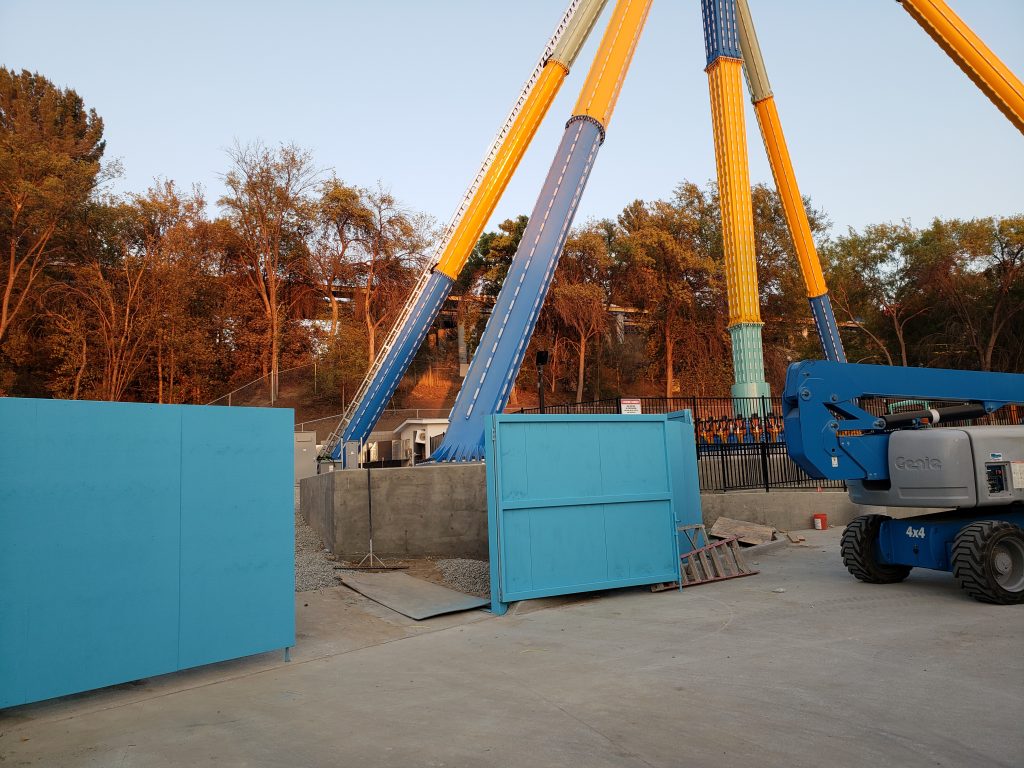 Another nice touch in the area are all the new flags added to the corners of each game building in the Boardwalk area! 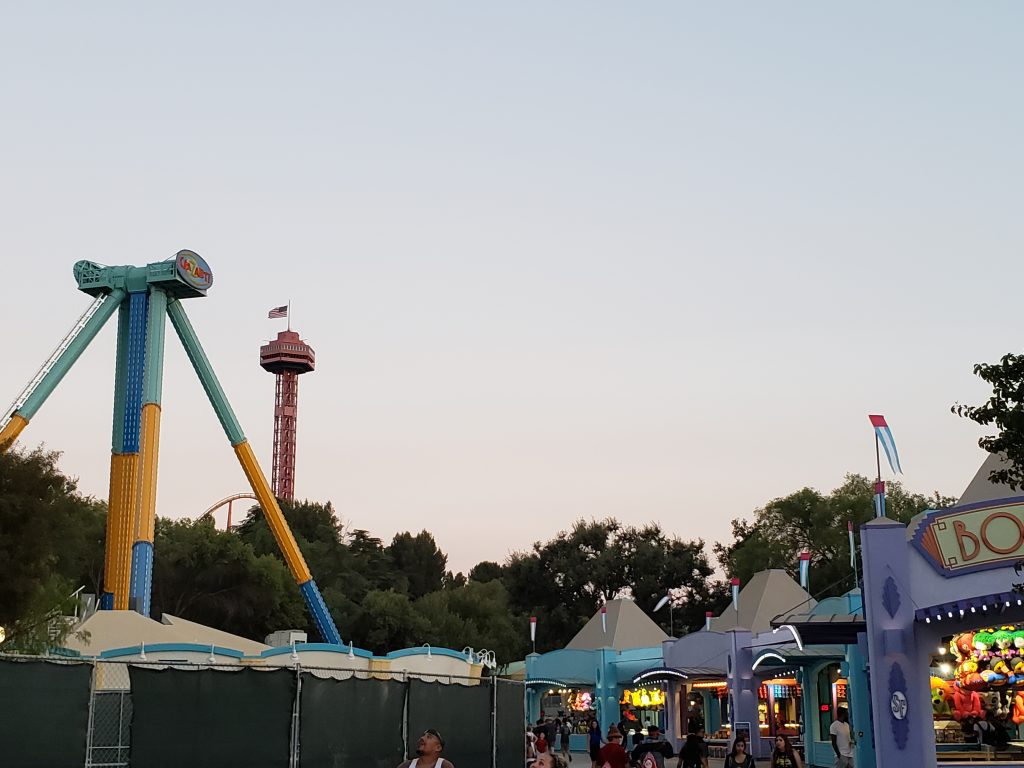 This was the park’s biggest July 4th Fest yet with the first year of the All-American Food Festival. A lot of locations throughout the park were set up for it and I really enjoyed the atmosphere of the event. 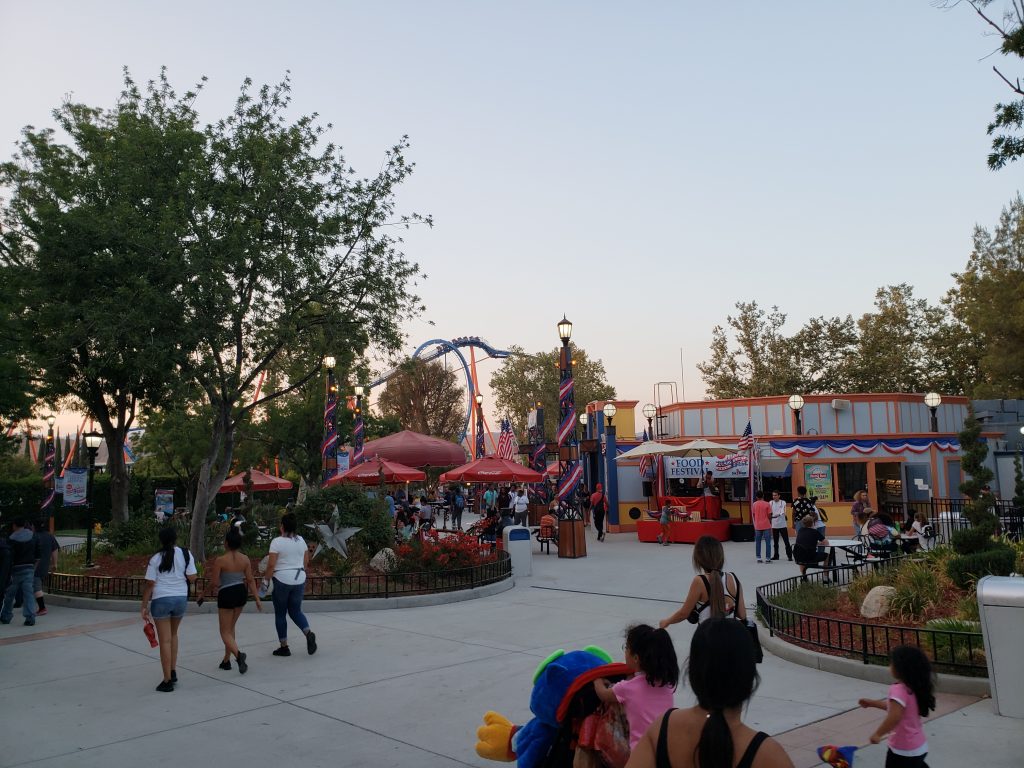 Last but not least! The main reason why I stopped by the park this evening, was for the fireworks show! Which I really enjoyed! The location from which they launch the fireworks behind Full Throttle makes for an awesome setting with the giant loop in front! 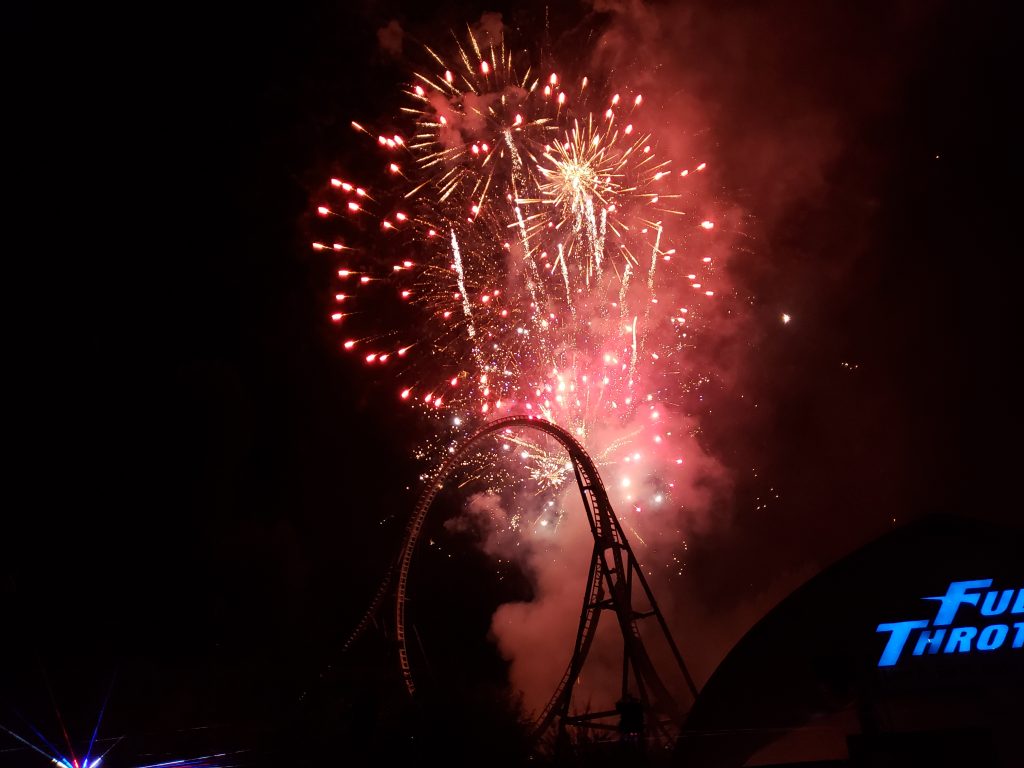 UPDATE! HERE ARE THE PASSHOLDER PREVIEW DATES!July 7th: 10am-10pm for Gold Plus, Platinum, Diamond and Diamond Elite Members.
July 8th and 9th: 10.30am-9pm for all pass holders and members! 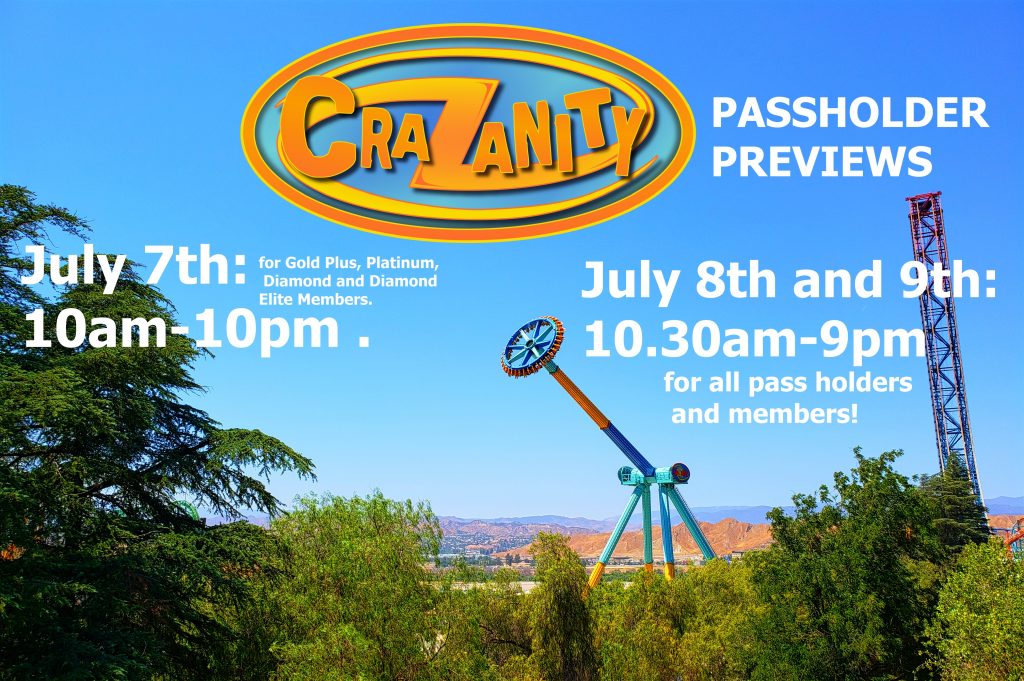 Thank you for checking out this quick Six Flags Magic Mountain Update! We’re very excited for the opening of CraZanity on July 13th! For more new articles and reports, take a look here: