Sean: We just had a Six Flags Magic Mountain Update from late last week, but here we are with another new update with lots of details, Cyclone Bay construction, 4th of July Fest, Hurricane Harbor, CraZanity testing, AND… an Opening Date!

We’re going to start off the report with a quick look at Hurricane Harbor. I haven’t been at this side of the Mountain in a while, simply because I am not the biggest water park fan, and my tastes for water parks have changed. But with the recent changes the park has been making, it was only fair I’d check it out! In 2016 the park repainted the Lost Temple Rapids slide to be yellow and blue, as seen here, which adds some nice color upon arrival to Hurricane Harbor. 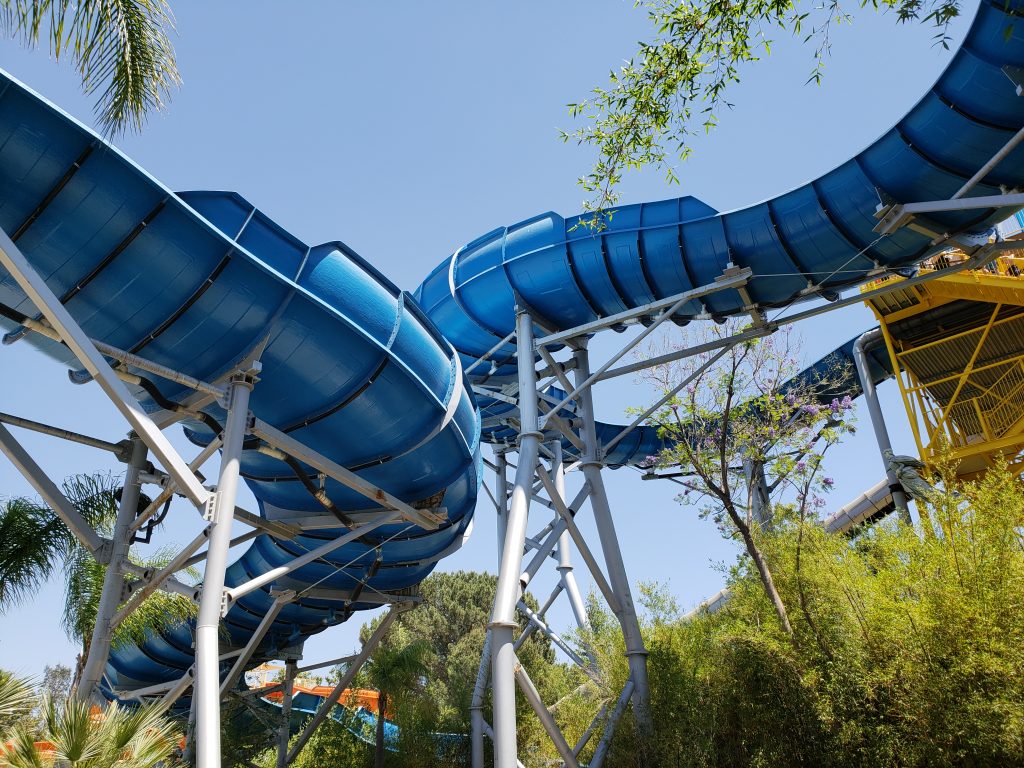 New this year, though not an actual new slide, is the repaint on Lightning Falls. Much like Lost Temple Rapids, which too was white before its repaint, the park is adding much needed color. 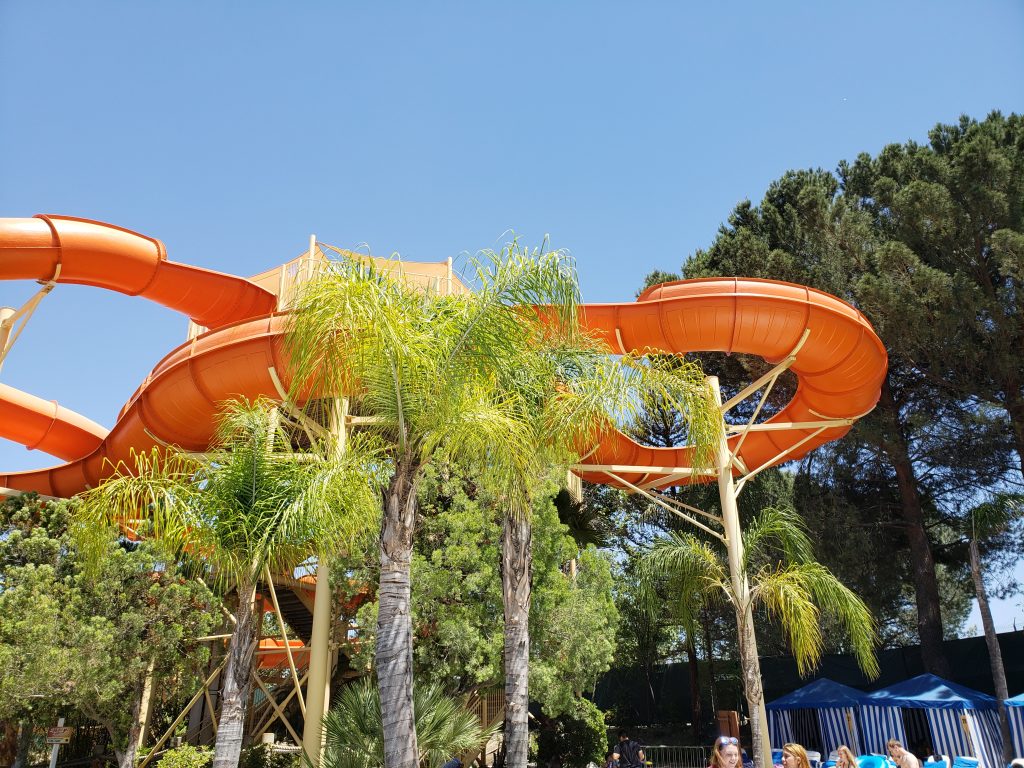 The orange is soothing and fits nicely in the area it is in. It endures never ending sunlight, so I wouldn’t be surprised if the slides would soon be white washed again. 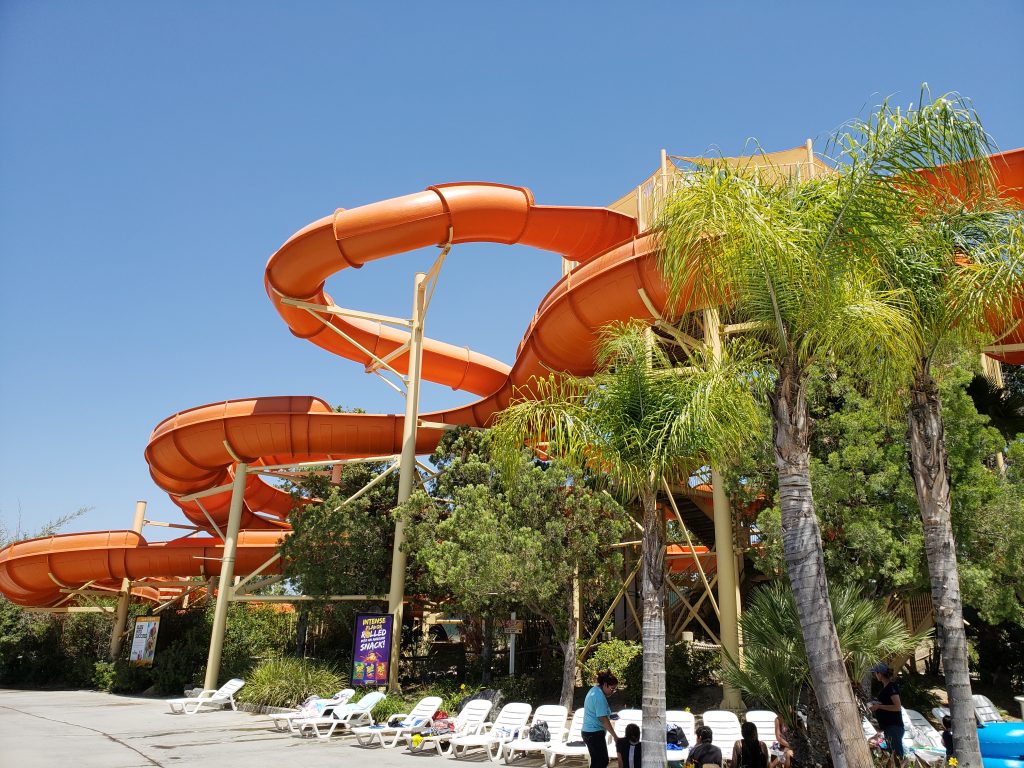 But as of right now, Hurricane Harbor looks much more pleasant thanks to the updates that Lightning Falls has received. 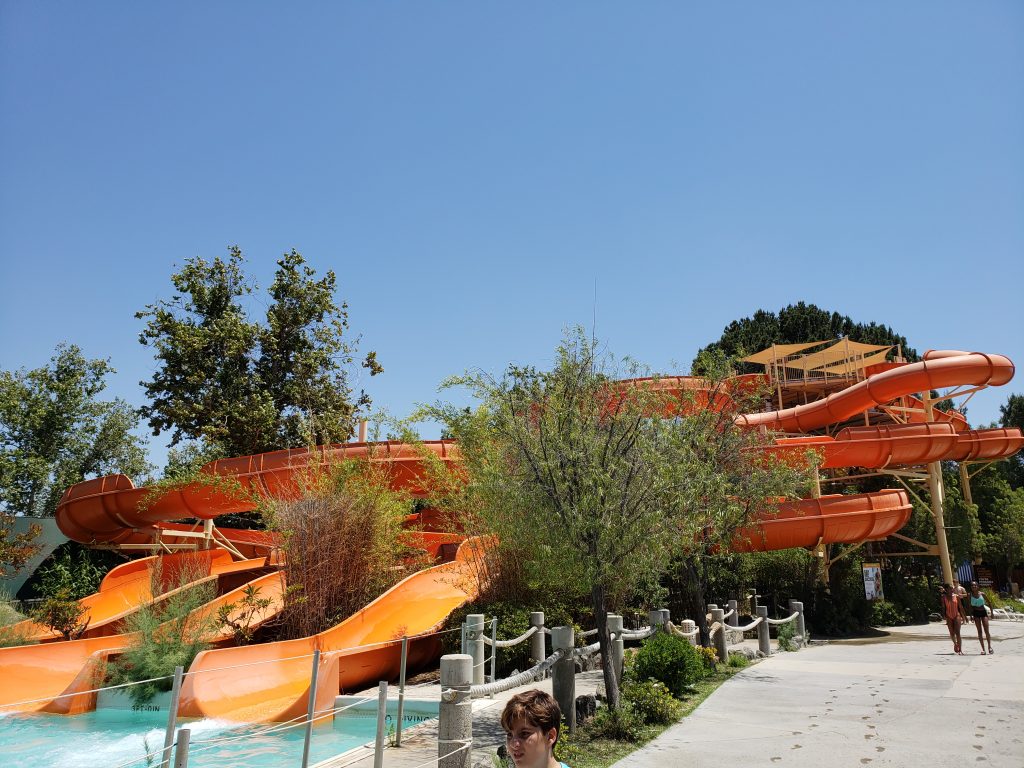 Also new is the Diamond Seating Area for Diamond Elite Membership pass holders. Its all a mouth full and personally I think Six Flags is moving too fast with their pass program. Their parks need a whole lot of fixing before they can act like they are some elite institute with Diamond memberships. Luckily Six Flags Magic Mountain and their accompanying water park are some of the better parks in the chain, and I usually have great experiences at these parks. 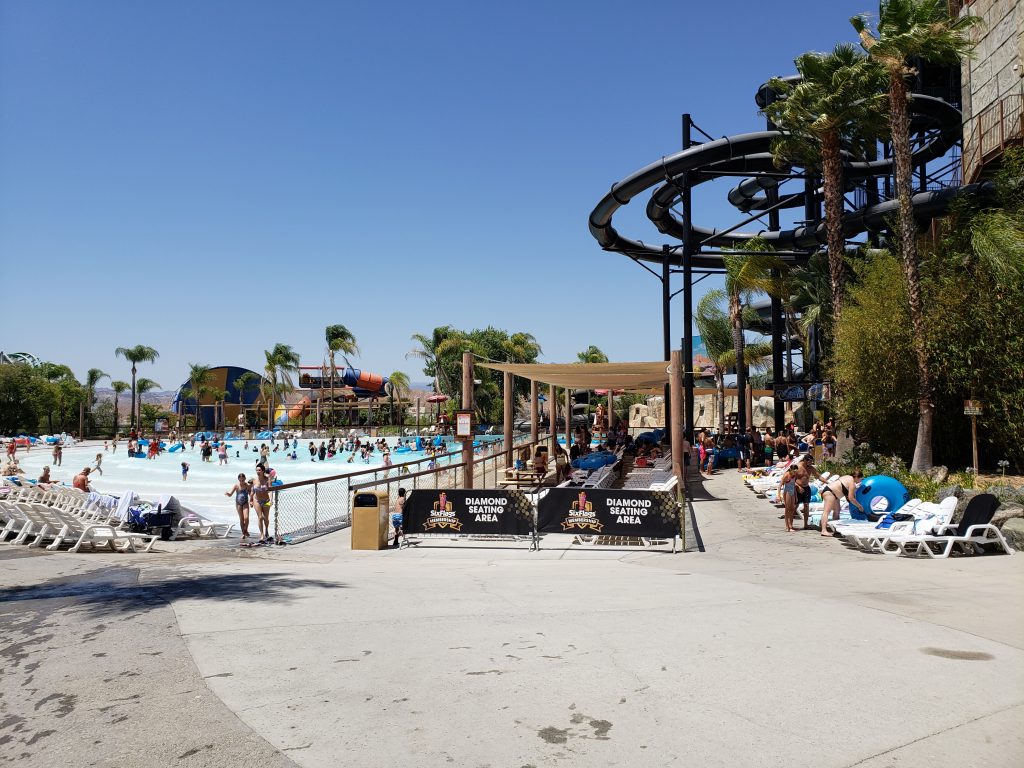 I used to actively visit Hurricane Harbor LA, and I must admit that though the park has been proactive about upgrading slide structures, there’s still a lot of faded slides and rusted supports that need some love. 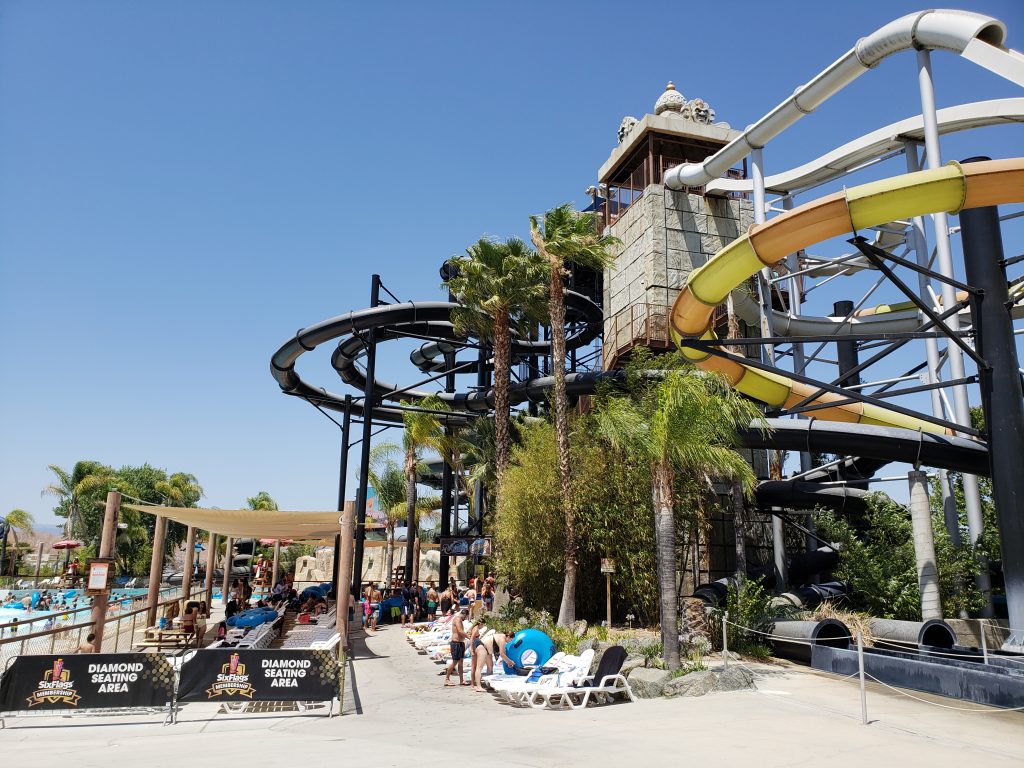 A cool feature of Hurricane Harbor Los Angeles is the jumbotron above the wave pool! 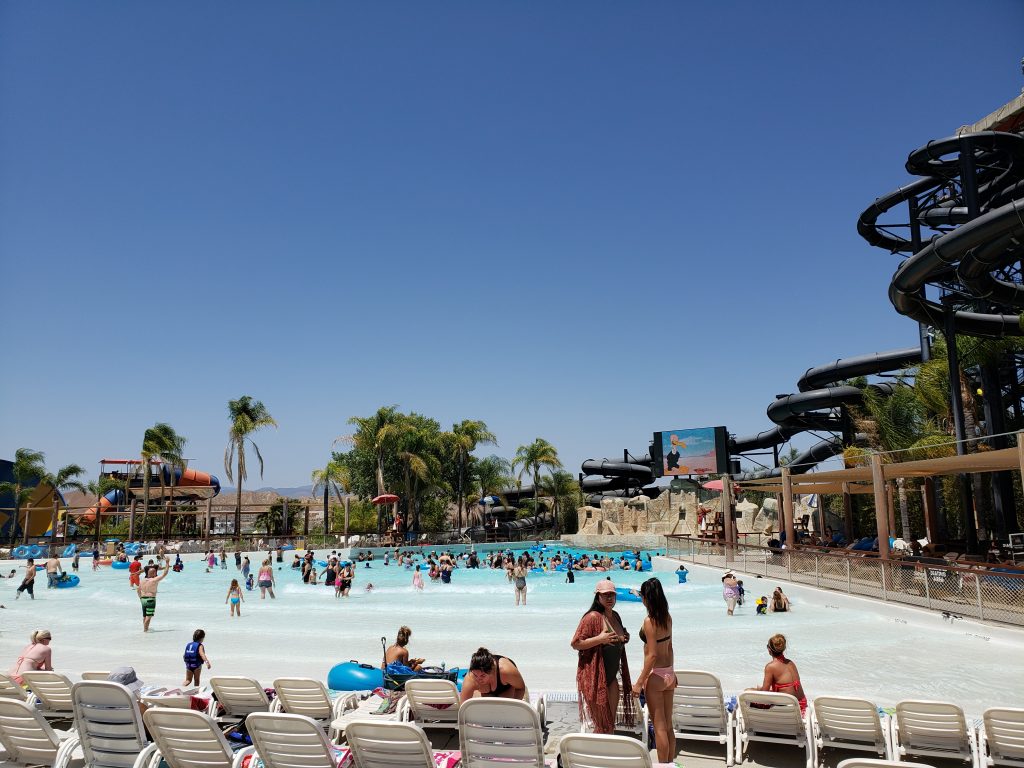 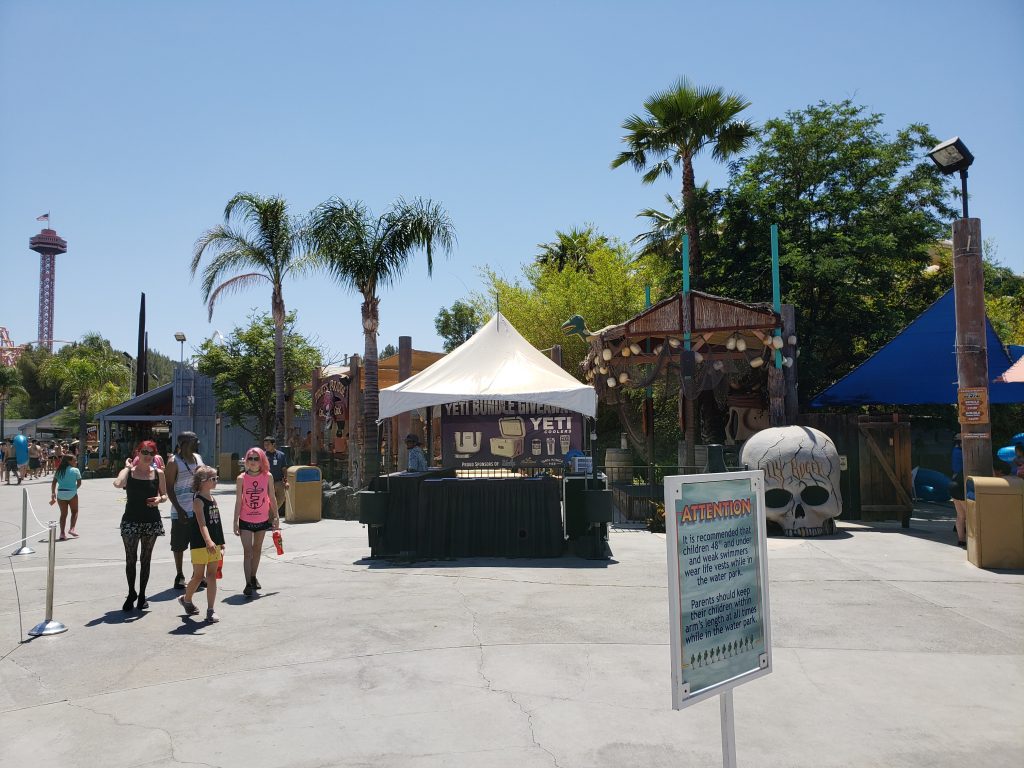 Alright Hurricane Harbor, it was pleasant seeing you again. Kudos to Six Flags for maintaining the water park and investing annually in slide updates and upgrades, repaints and aesthetics. Let’s move next door! 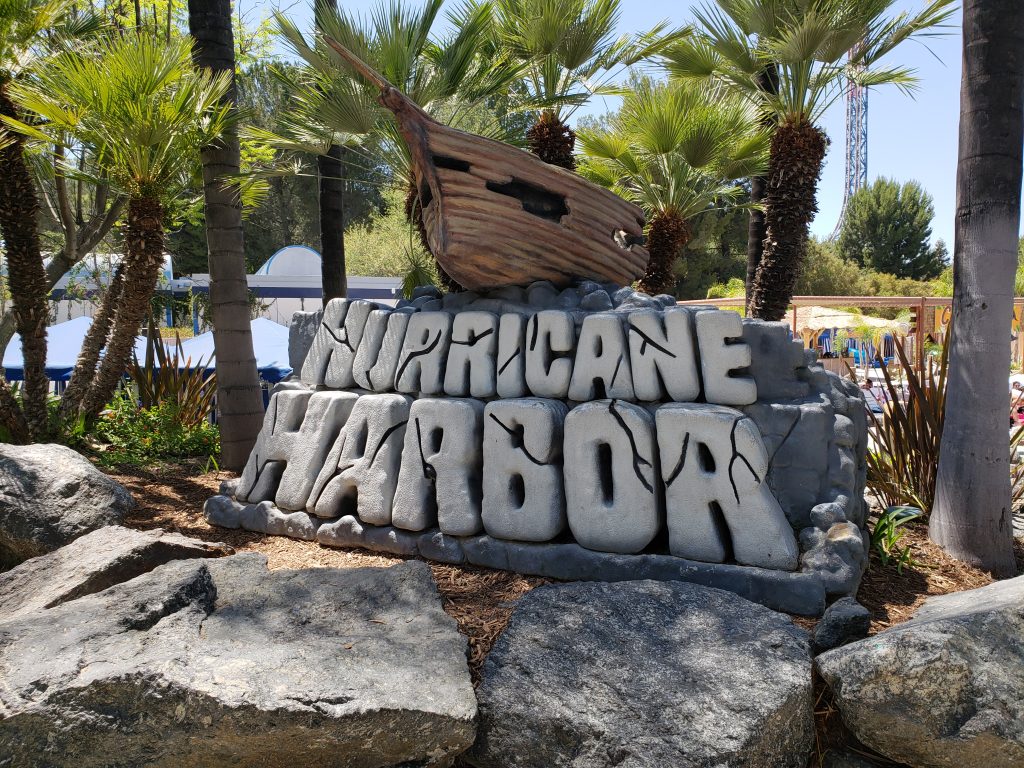 July 4th Fest is back this year as well, a few changes include a total of 5 days of running time and ERT for the event, as well as a new All-American Food Festival! 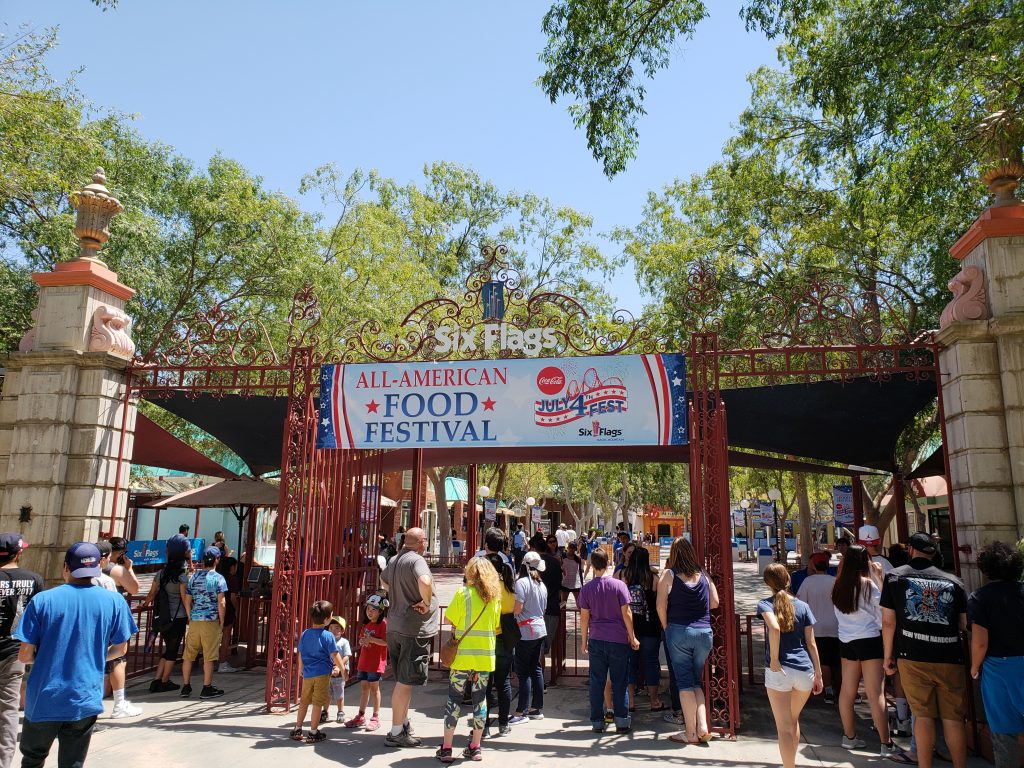 *To participate in the Early Ride Time, guests must bring a can of any Coca-Cola® product or purchase a limited edition 2018 July 4th Patriotic Cup along with paid admission ticket. Early entrance for Members and Pass Holders will be honored on these days.**The Coca-Cola After Party is included with the purchase of the 2018 July 4th Patriotic Cup, the All-American Food Festival punch card, Diamond or Diamond Elite members. 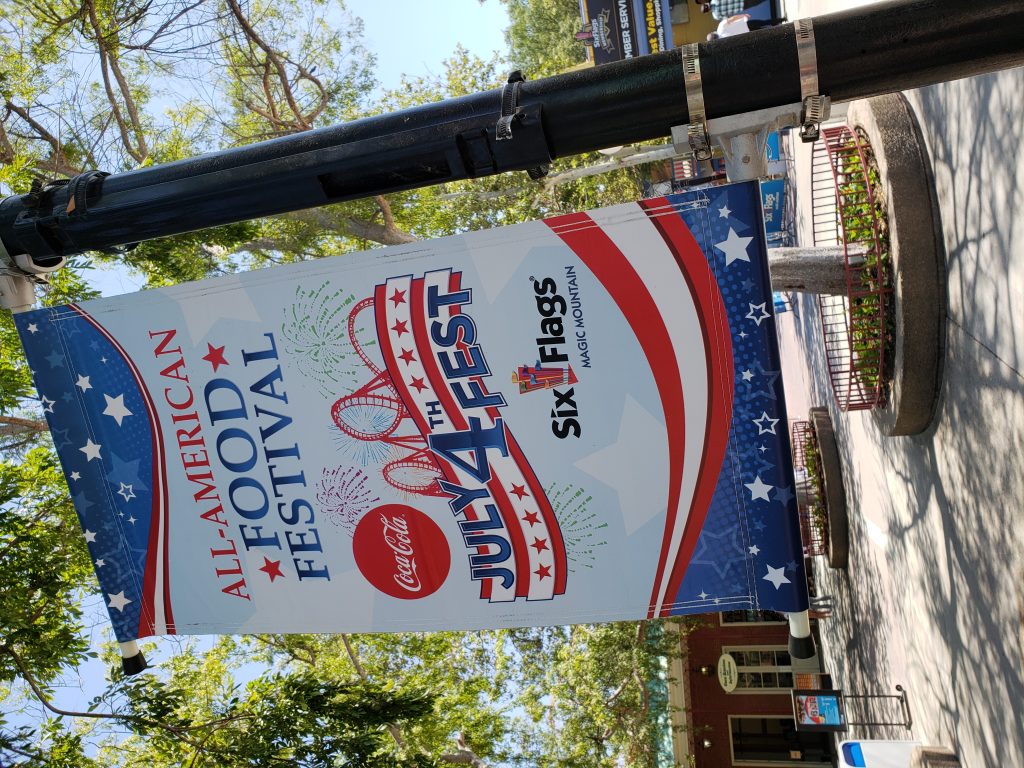 Let’s continue with some park notes! Construction of the new neighborhoods around the park is moving lightning fast, as I was looking at Riddler’s Revenge in the background, some massive trucks made their way down the hill just behind Riddler, the movement of all the dust around the construction area is causing midways, rides, and buildings to be covered in dust. 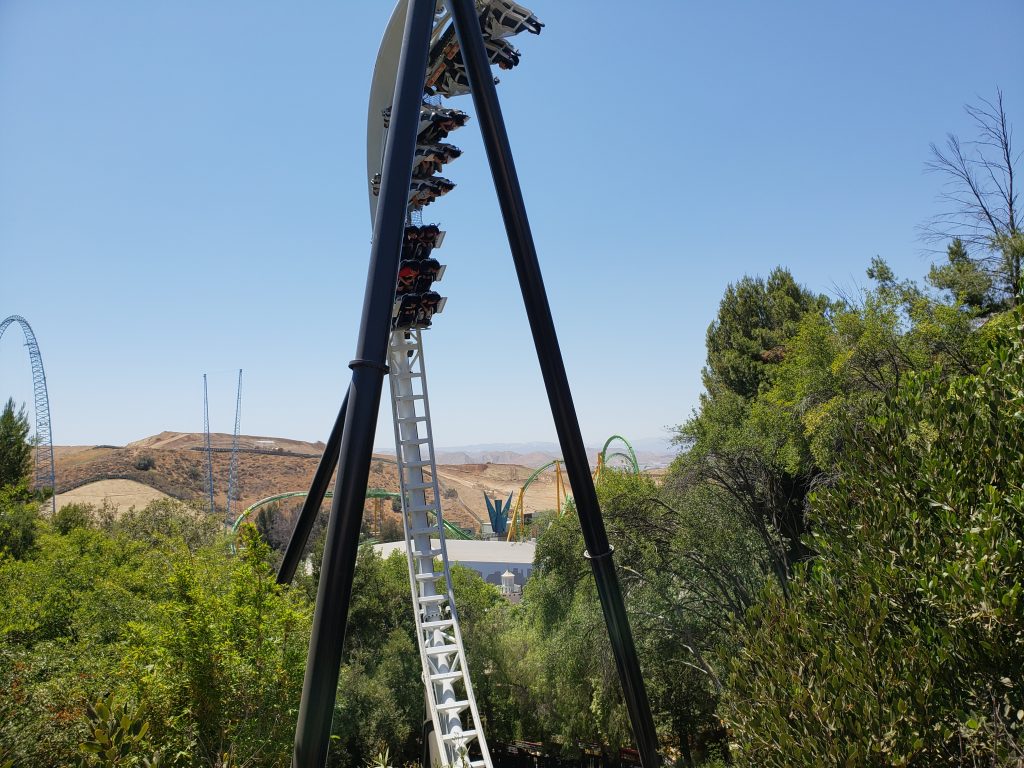 Who has read our last few reports is aware that the area currently under construction for a major makeover is Cyclone Bay, one of (if not THE) last remaining area that needs a makeover is Samurai Summit. 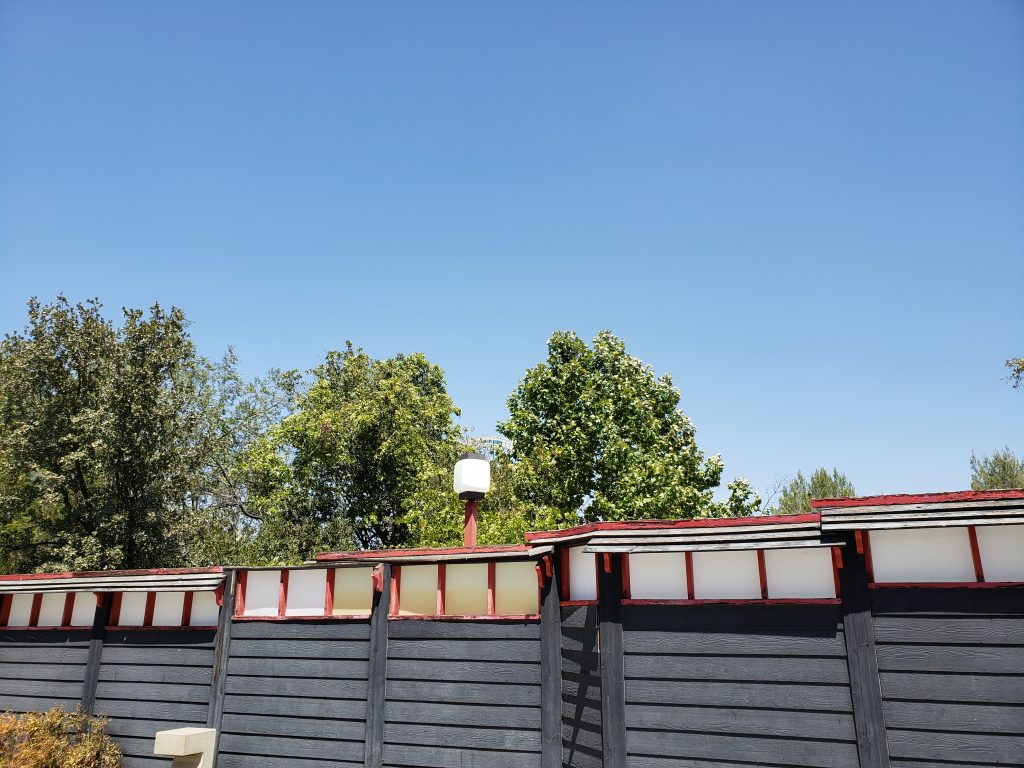 From Samurai Summit I spot CraZanity testing! We have a lot of Boardwalk and CraZanity pictures a little later on in the report! 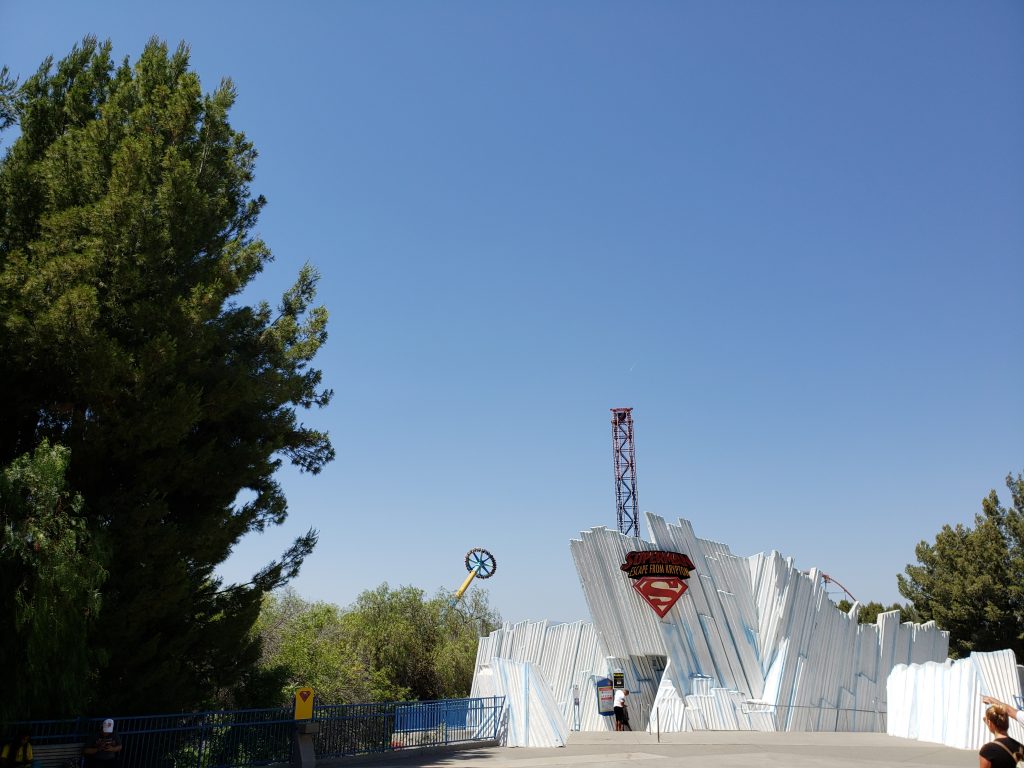 Shout out to Gold Rusher for still being one of the better terrain mine trains out there, I always thoroughly enjoy my rides on the park’s original coaster. 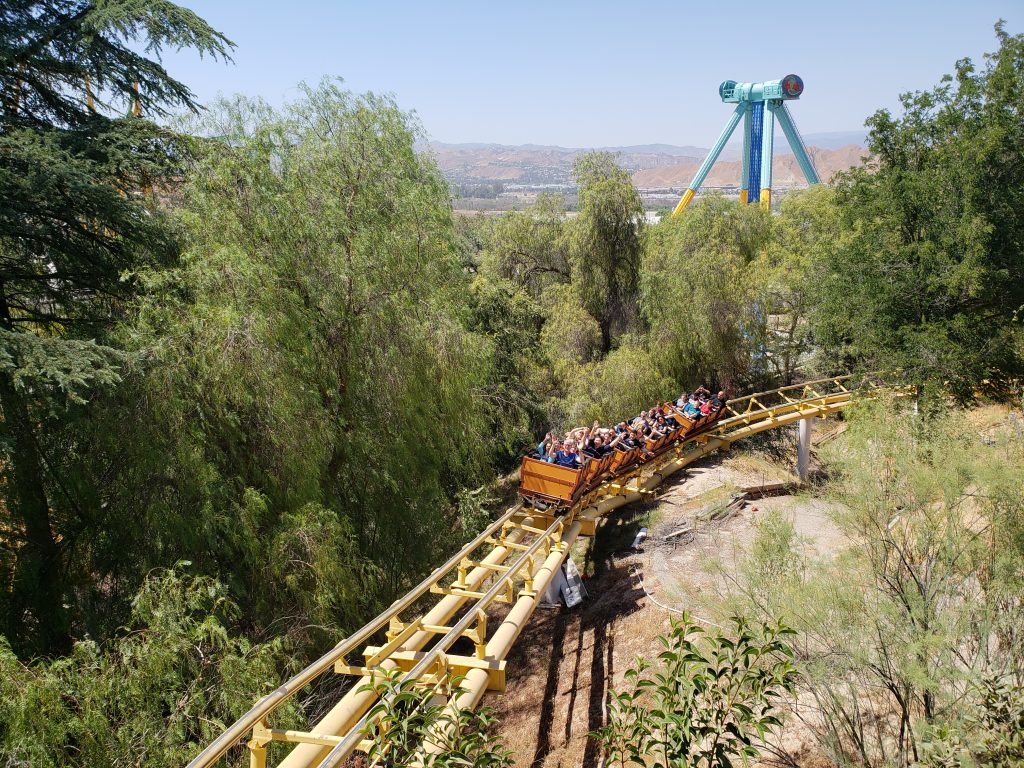 We were on the East Coast at Six Flags America, Kings Dominion and Busch Gardens Williamsburg last week. We sure were sad that Big Bad Wolf was no longer around, but luckily we got our very own Big Bad Ninja to enjoy. 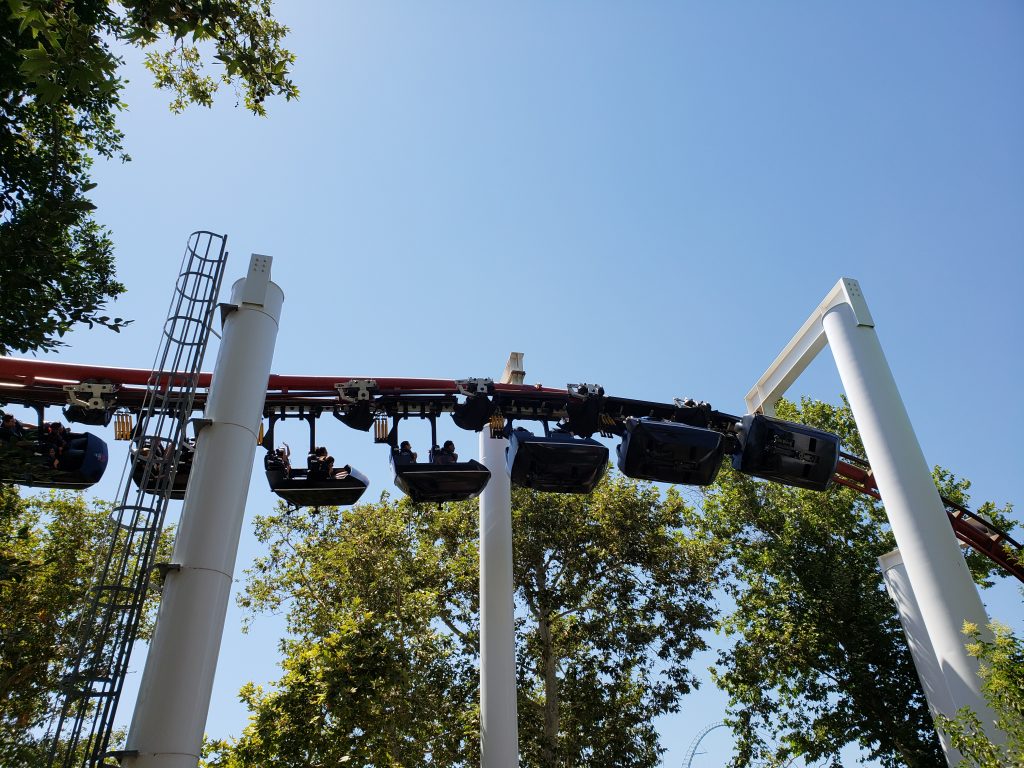 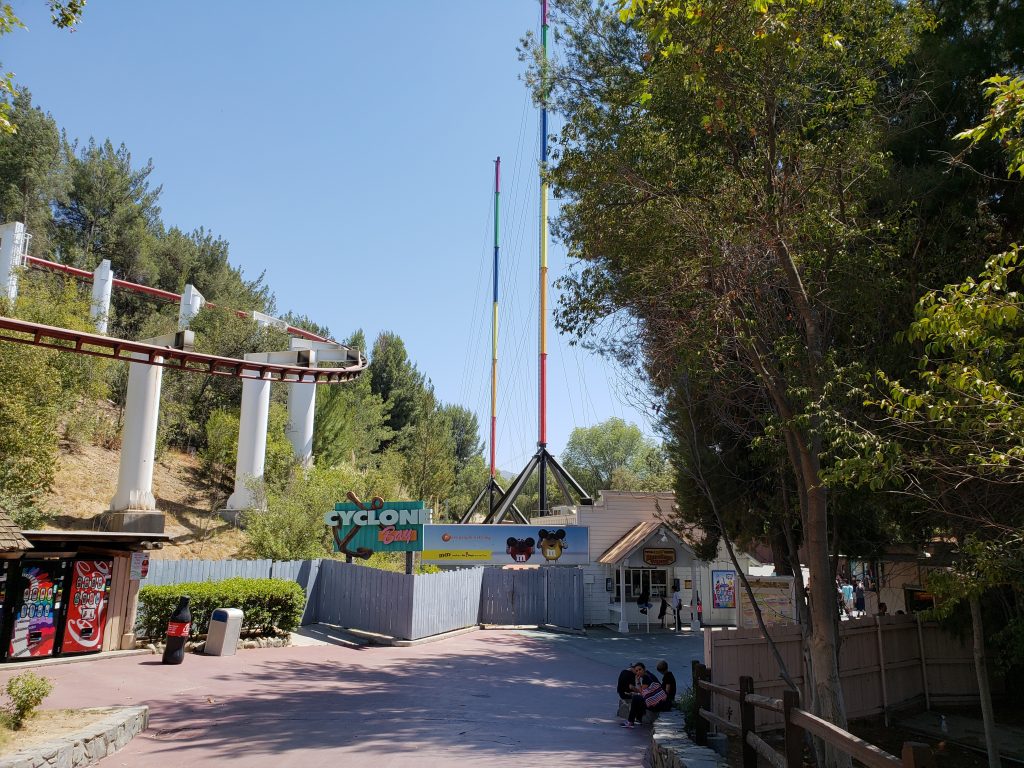 To my surprise the game pavilion and arcade were open, which I had not seen open in a long time. I suppose the park really wants to please crowds here as much as they can before major construction starts taking place. 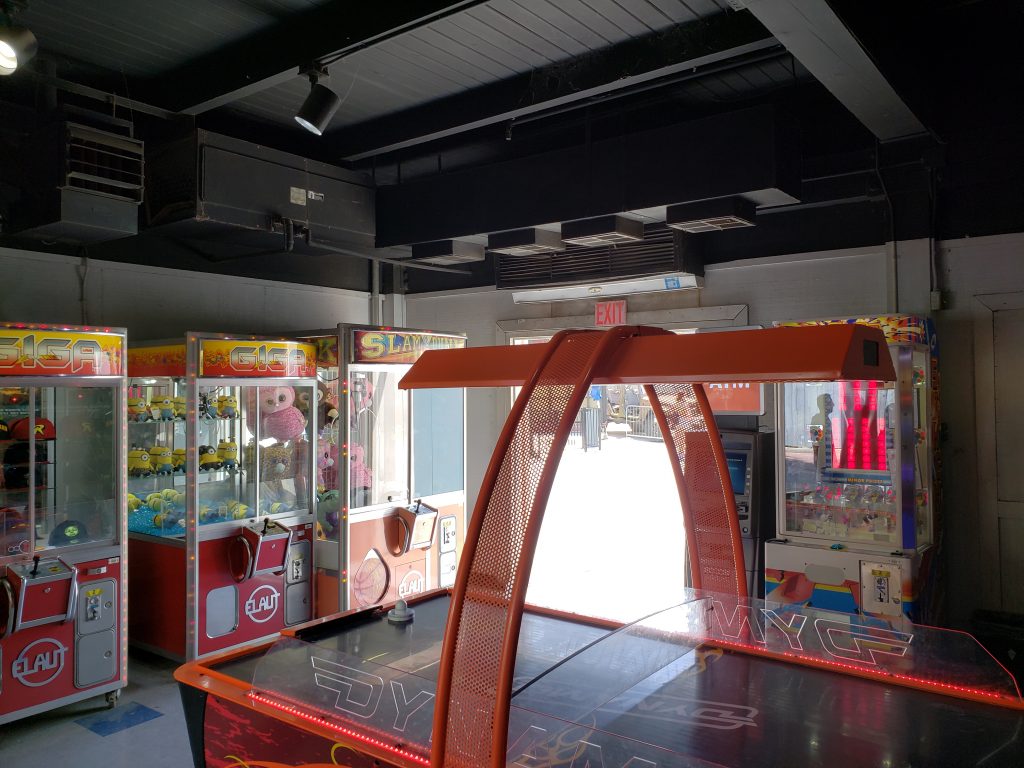 The Epic Rides gift store was also open. I haven’t seen this many people in this area in a very long time. 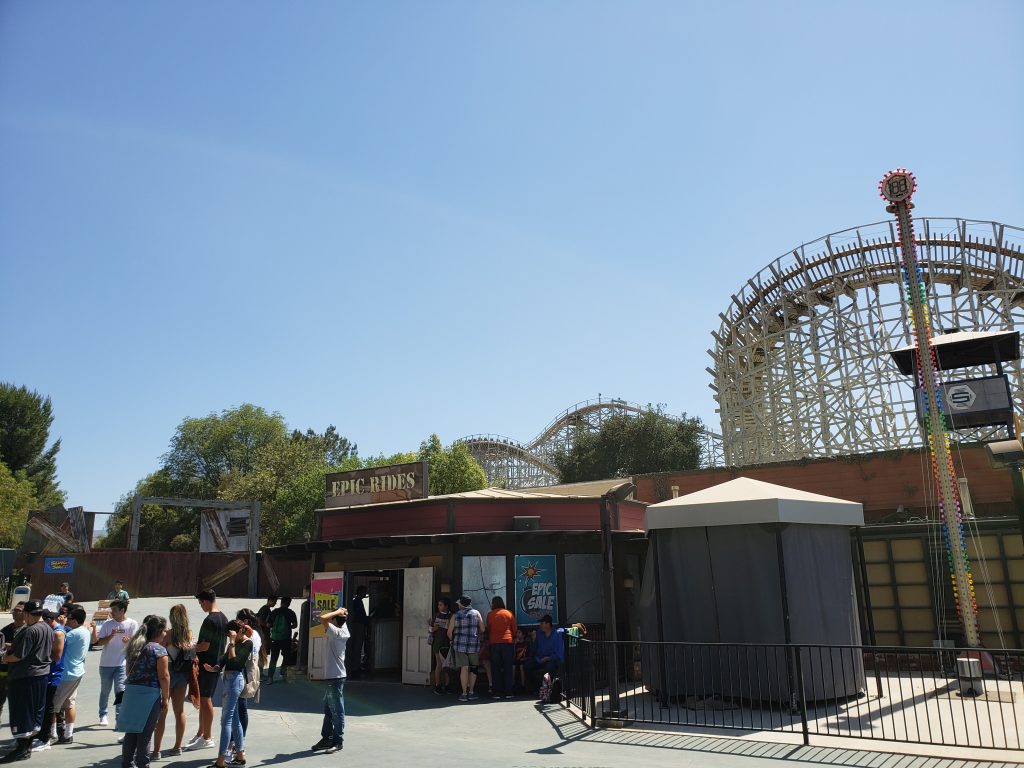 Apocalyepse is just riddled with smoothness issues, and I sincerely hope that this GCI wooden coaster will get yet another retracking treatment when the area closes for the big changes. Perhaps an update of the ride’s theme and name are a good idea too. 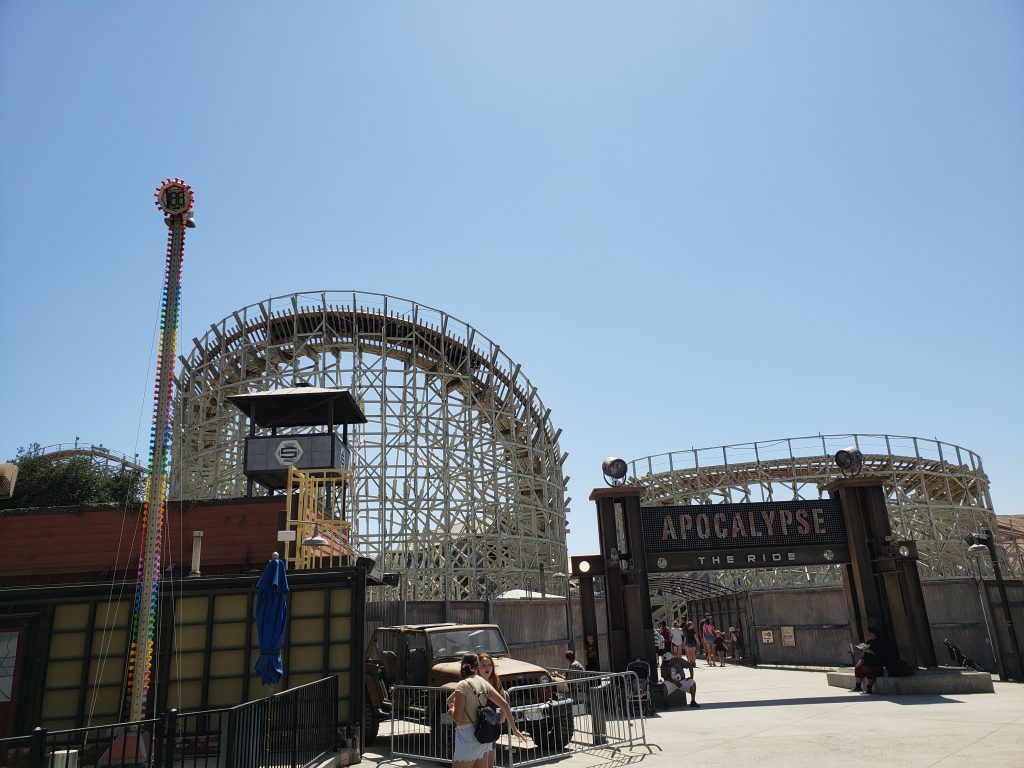 Here is the wall! The wall that leads from the Arcade to Cyclonge 500 (go karts). 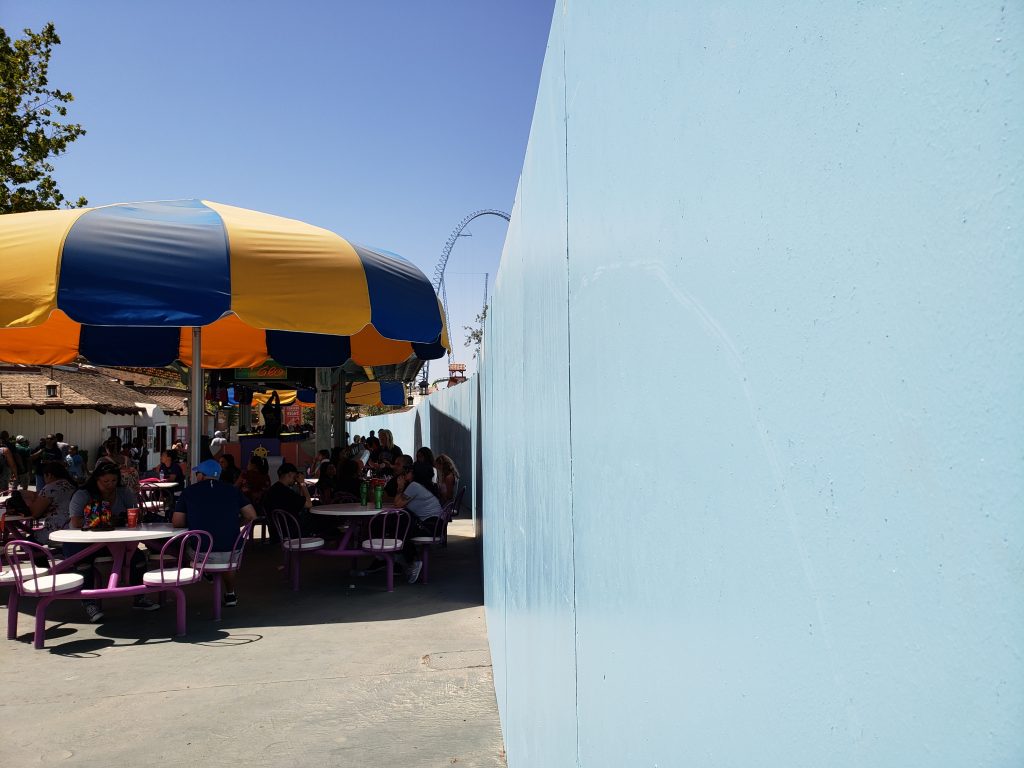 Suddenly the area looks a lot busier now a wall takes away some of the space for people to walk. 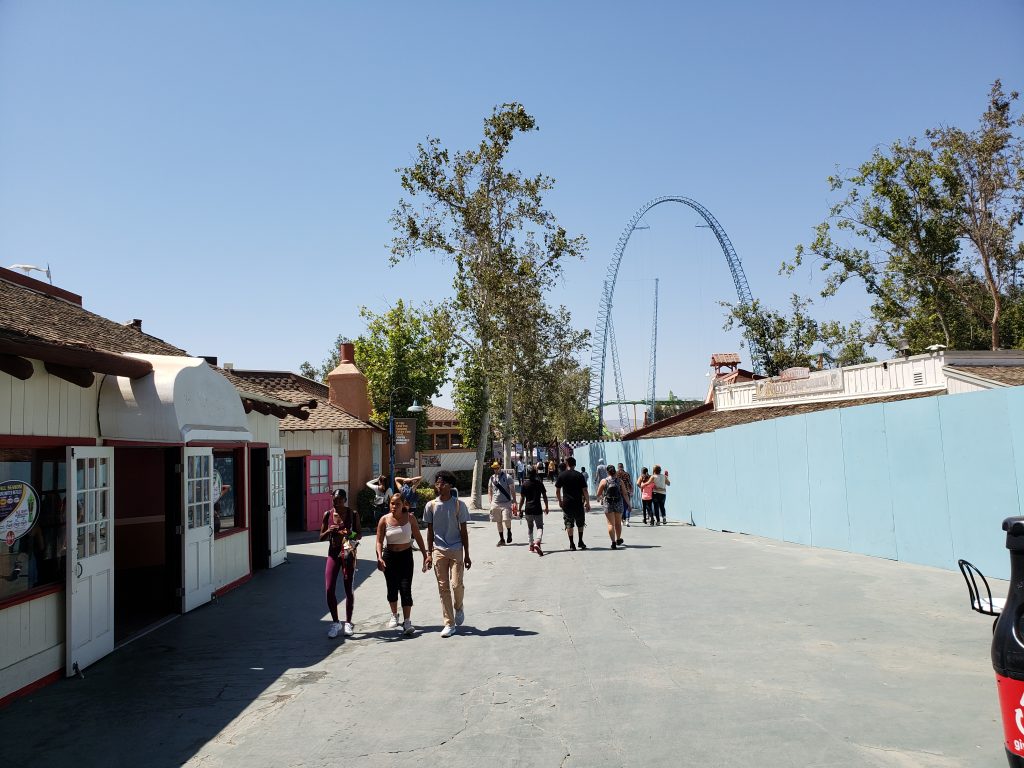 Los Cuates that closed at the start of the 2018 season is going to be one of the locations for the All-American Food Festival this year, and thus it is being decorated appropriately. 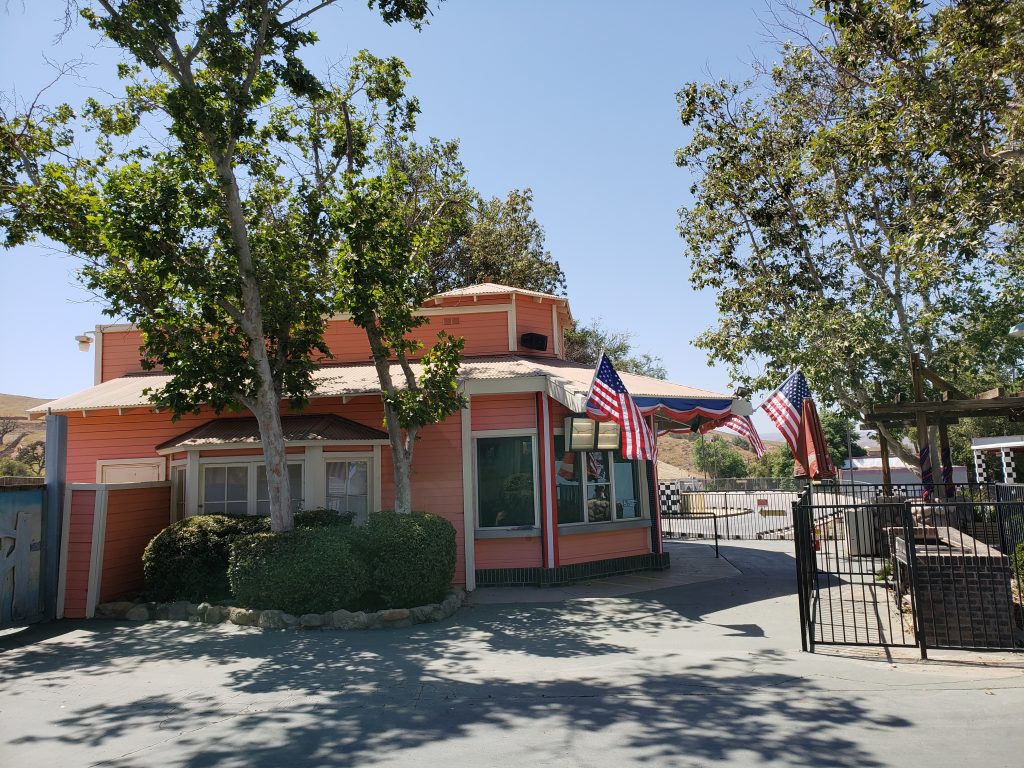 The decorations are honestly very cute, I look forward to seeing it being used again. 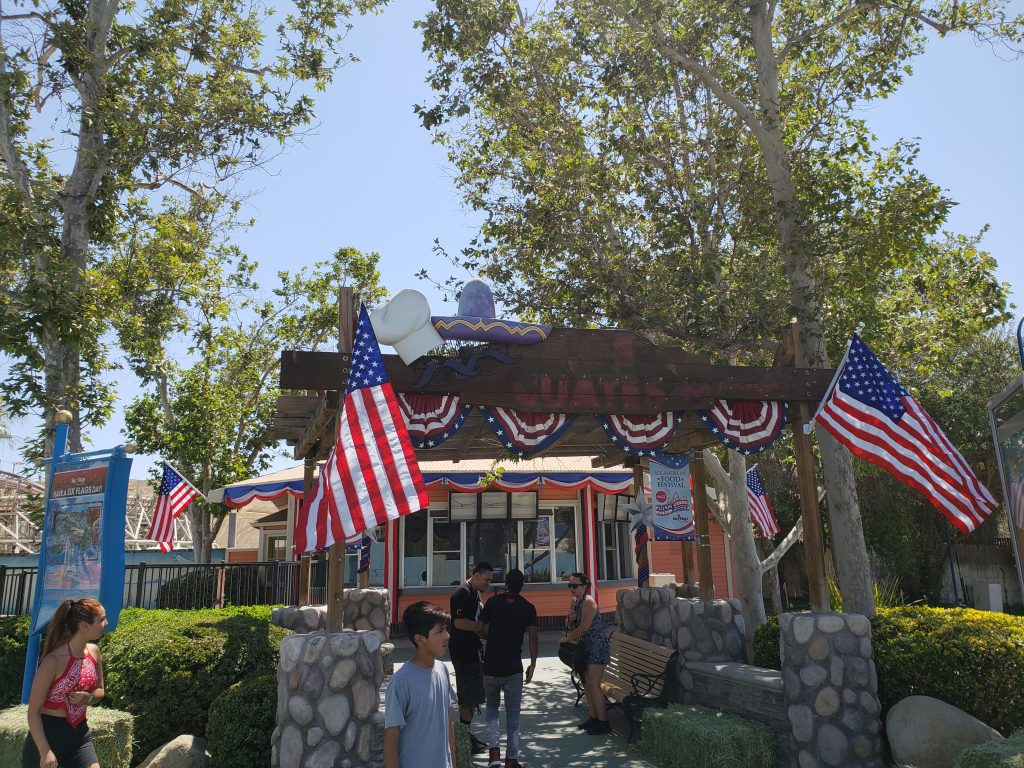 As we make our way to the Boardwalk, where lots of new concrete is being placed, I want to share with you all that this concrete game is starting to get excessive. Wide midways are always a good idea for crowds, but Metropolis for example has entirely too much concrete. It is hot an miserable in the hot SoCal summer sun. 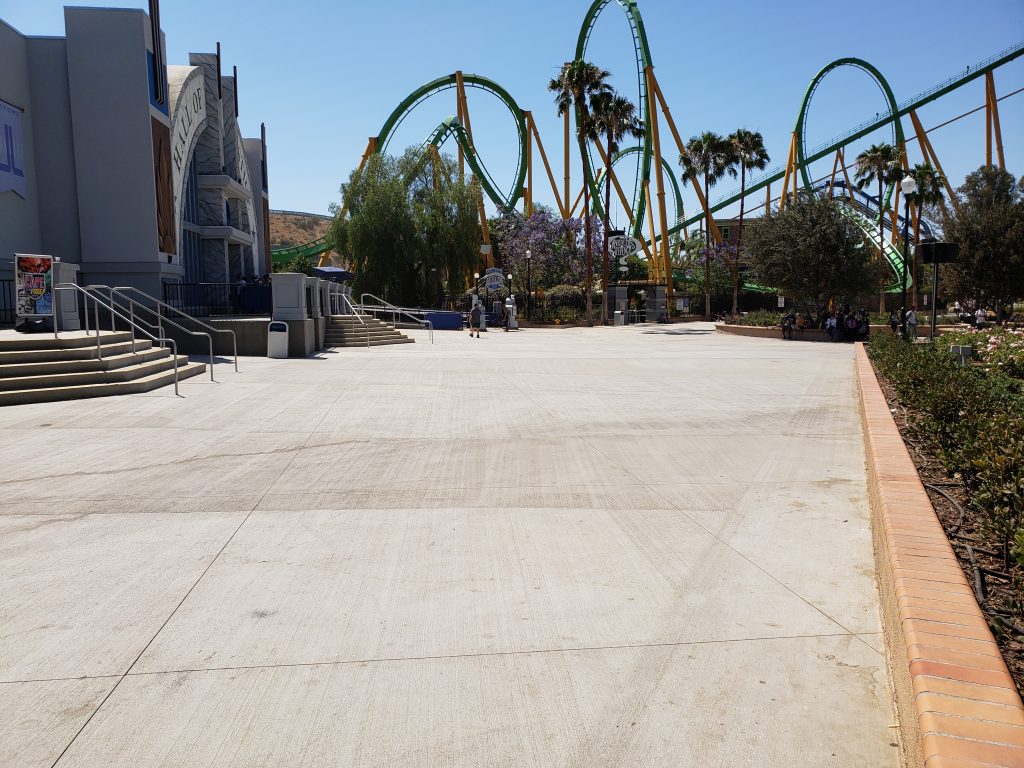 For everything Boardwalk and CraZanity (including opening date and testing), please head to part 2 of our update, here!