Time to move on to the park after which the complex is named: SeaWorld San Antonio. The 1988 Marine Park that opened as the world’s largest marine park has quite changed over the years, and though the remaining size is less than half of the size at opening, it still remains to be a giant park. 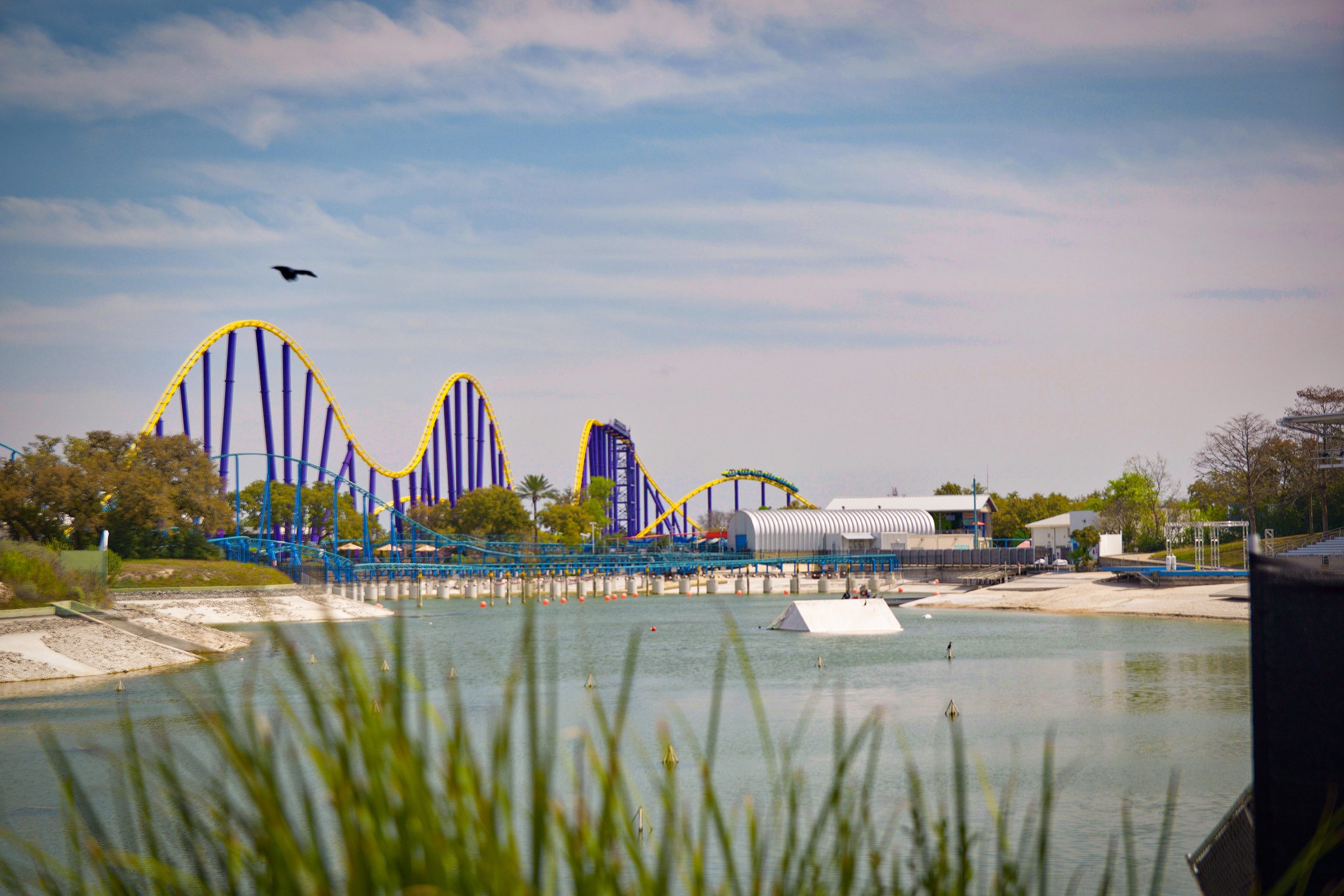 We call SeaWorld San Antonio a combination of a classic SeaWorld park with Busch Gardens. The park is home to a fun animal line up, but thanks to local competition a big thrill line up can be found here as well. Of the three SeaWorld parks, SeaWorld San Antonio has the most coasters! Including the freshly repainted Steel Eel, and to the left, Wave Breaker: The Rescue Coaster, a Jetski-themed multi-launch coaster. 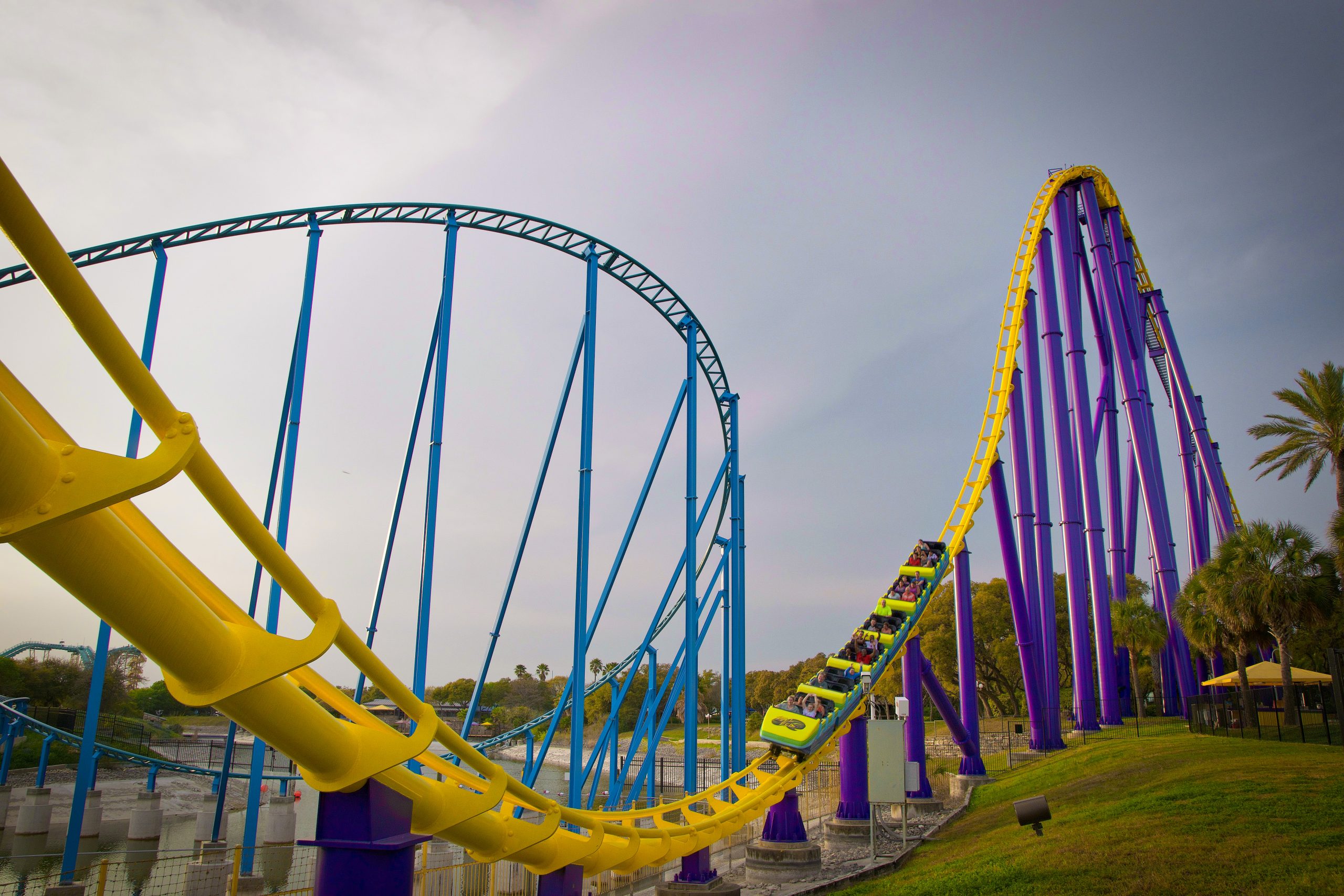 Steel Eel‘s classic airtime-focused layout still blows us away in 2020. The coaster has always been unique and once it warms up can be quite violent! 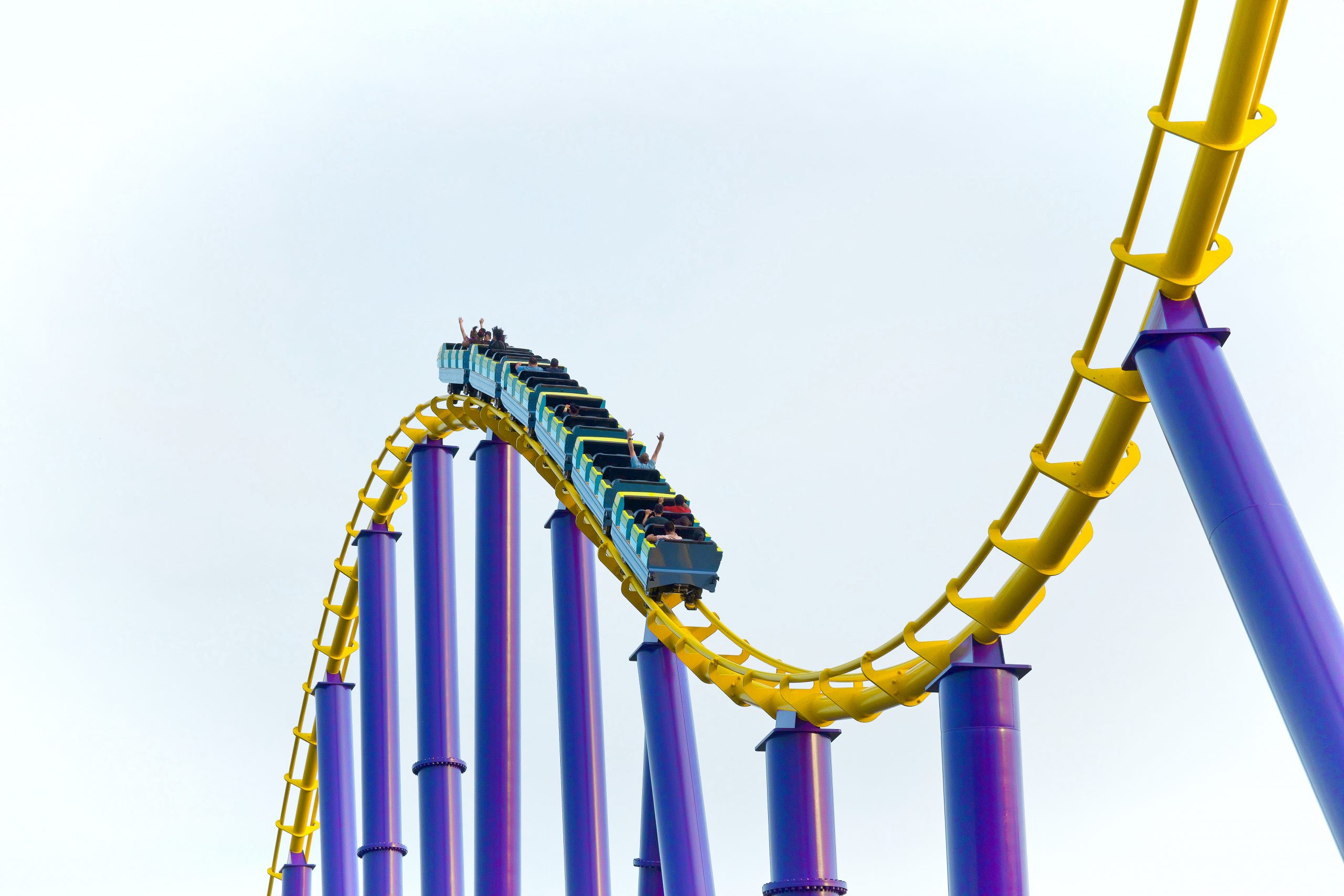 The recent electrifying repaint of the coaster has really made it stand out. The 150 ft. tall coaster is located on a hill (the park’s on a hill) and can be seen from miles away! 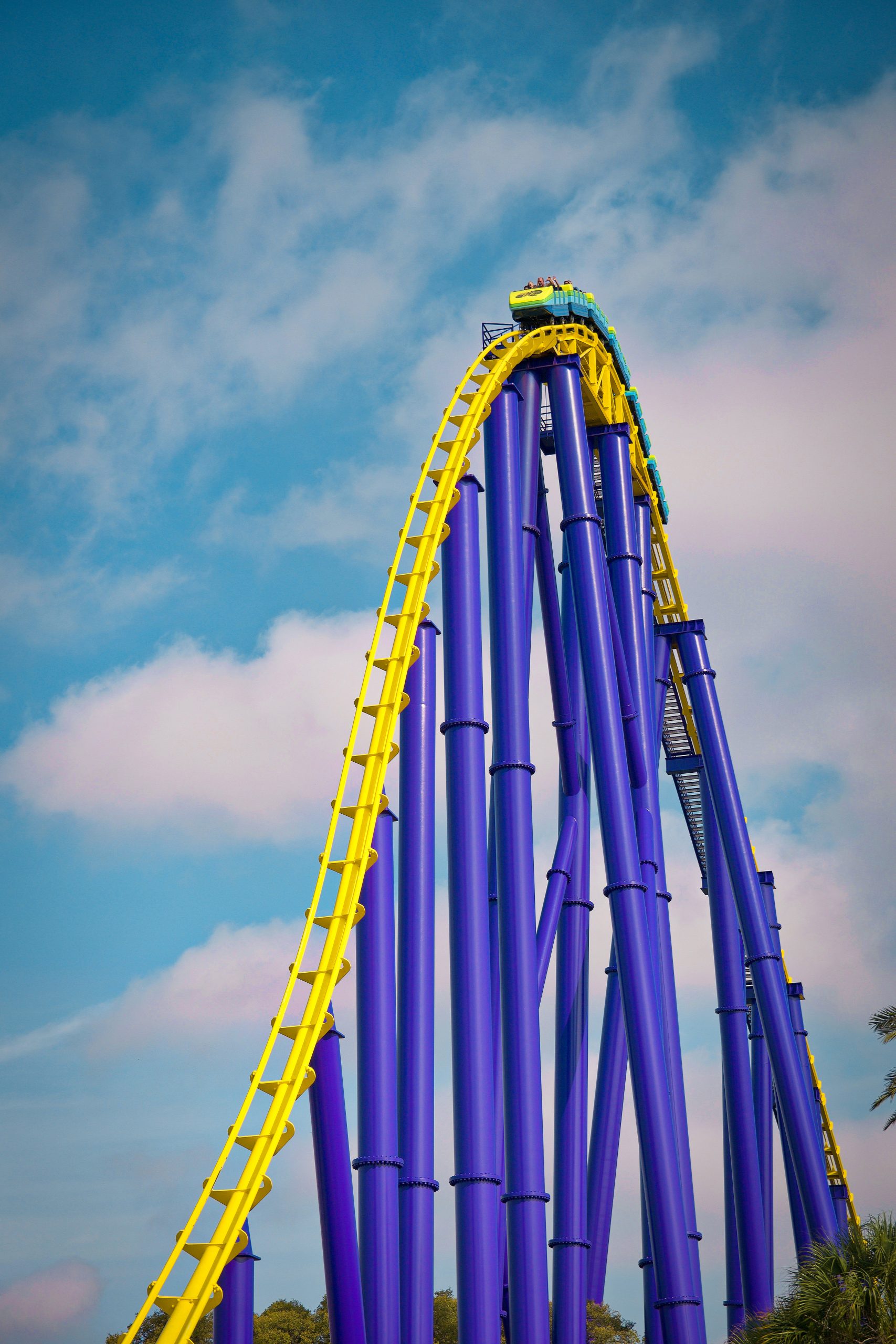 This 3,700 ft. long Morgan coaster remains to be one of my favorite hyper-style coasters in the world. It may only be 150 ft. tall, but it packs a punch. 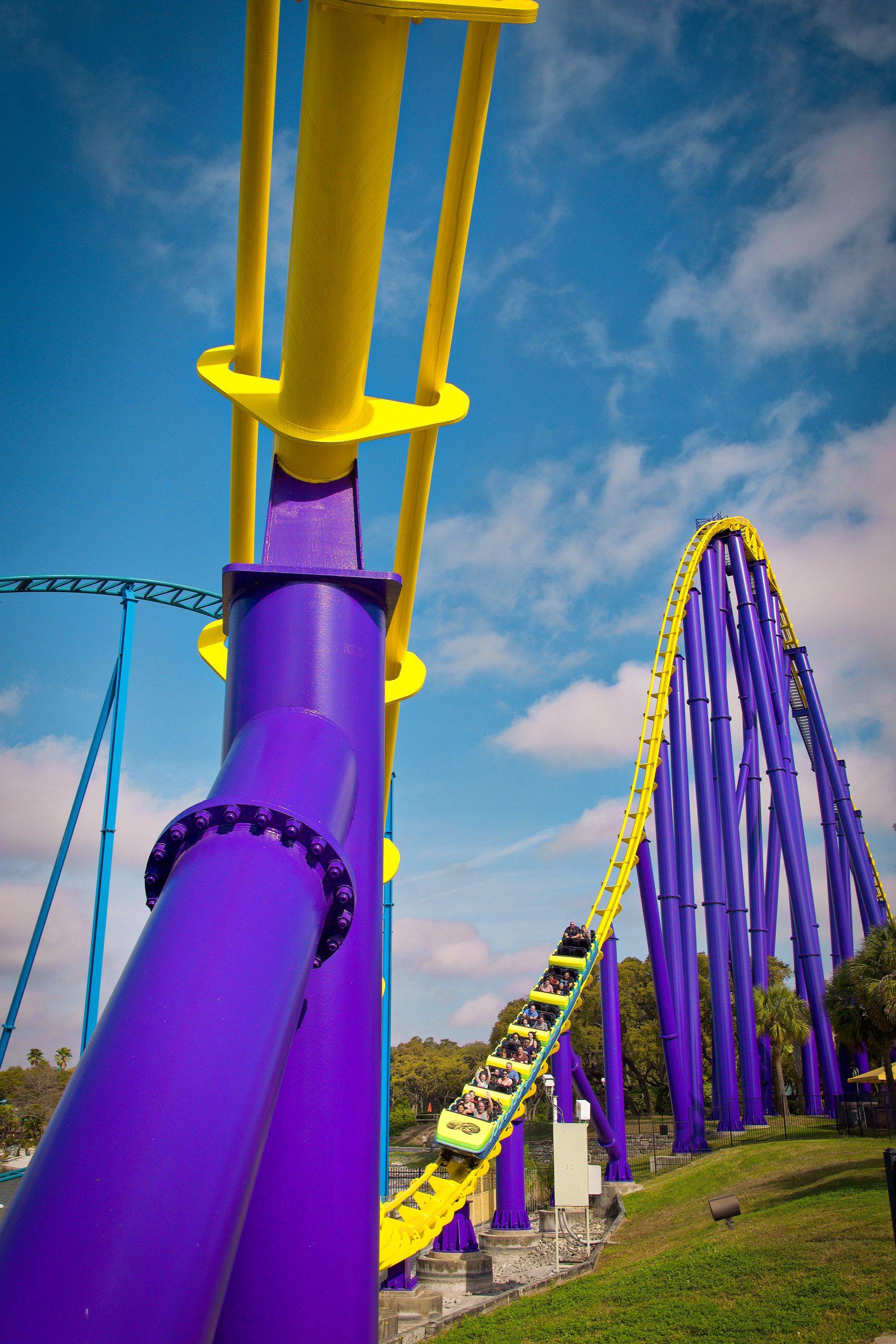 Of course SeaWorld San Antonio is also home to a pod of orcas! The park launched their version of Orca Encounter this year and we couldn’t be more delighted. 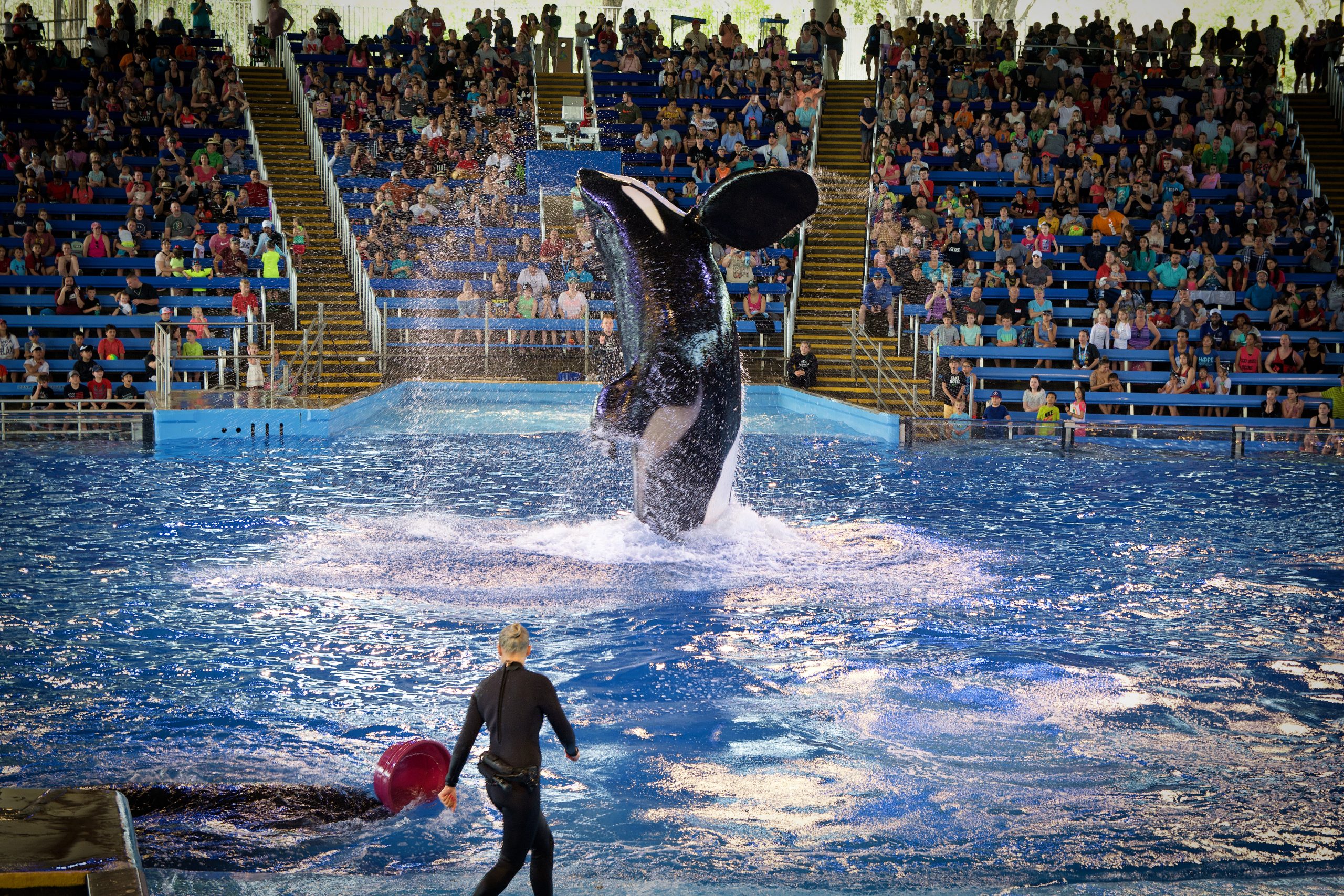 Having two large bulls (male orcas) in their pod, and a different type of stadium from San Diego or Orlando, made for everyone getting wet. 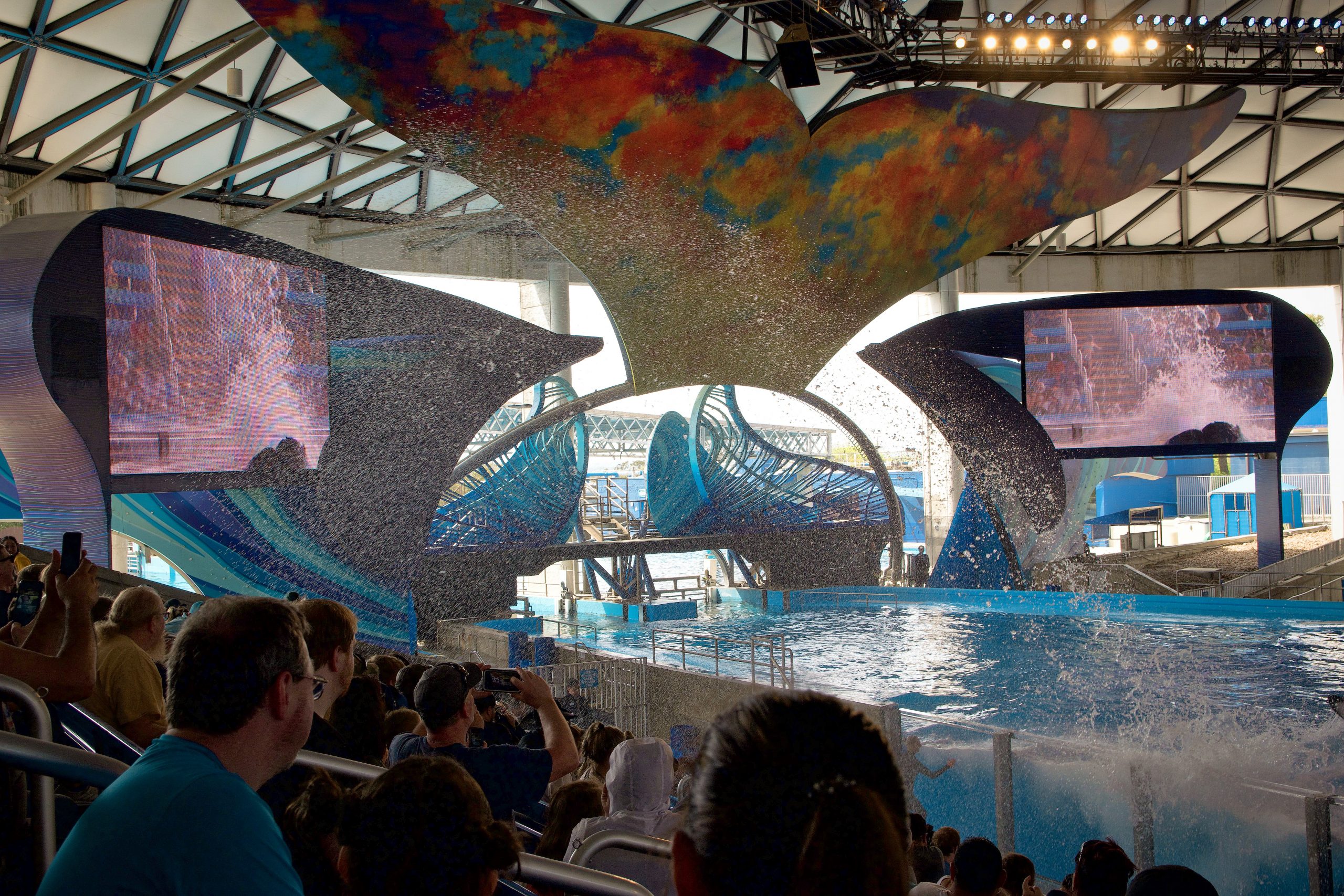 Much like Orlando’s Orca Encounter, San Antonio’s does have that spectacular edge! 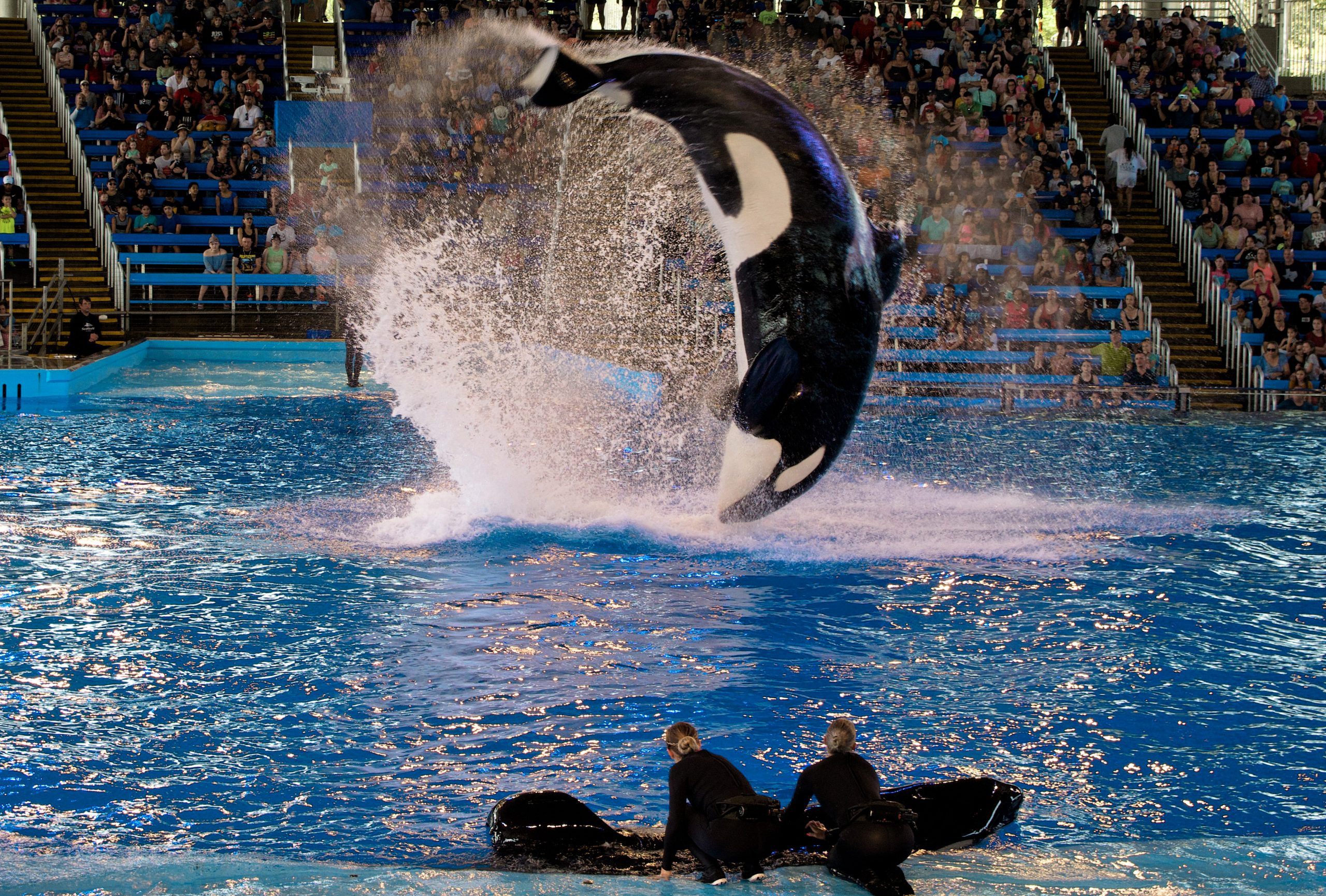 We also saw the park’s Ocean Discovery Show, where the pre-show was a visit of Tyonek, the stranded baby beluga that was rescued off the coast of Alaska and thrives at SeaWorld San Antonio. We got to meet his buddy, a Pacific Whitesided Dolphin as well. 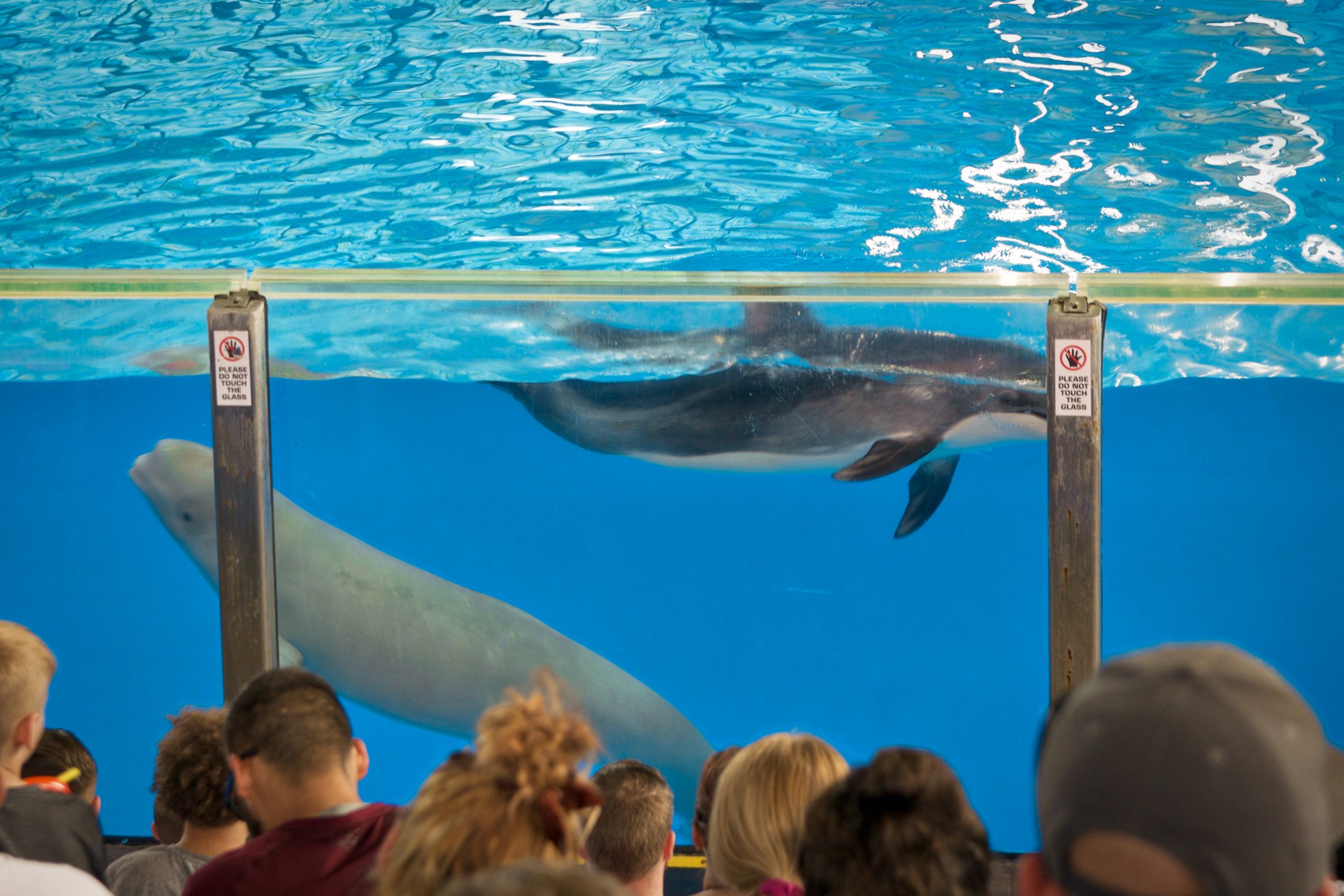 This show too is more educational and very adorable. It’s quite unique to have shows with belugas and pacific white-sided dolphins. 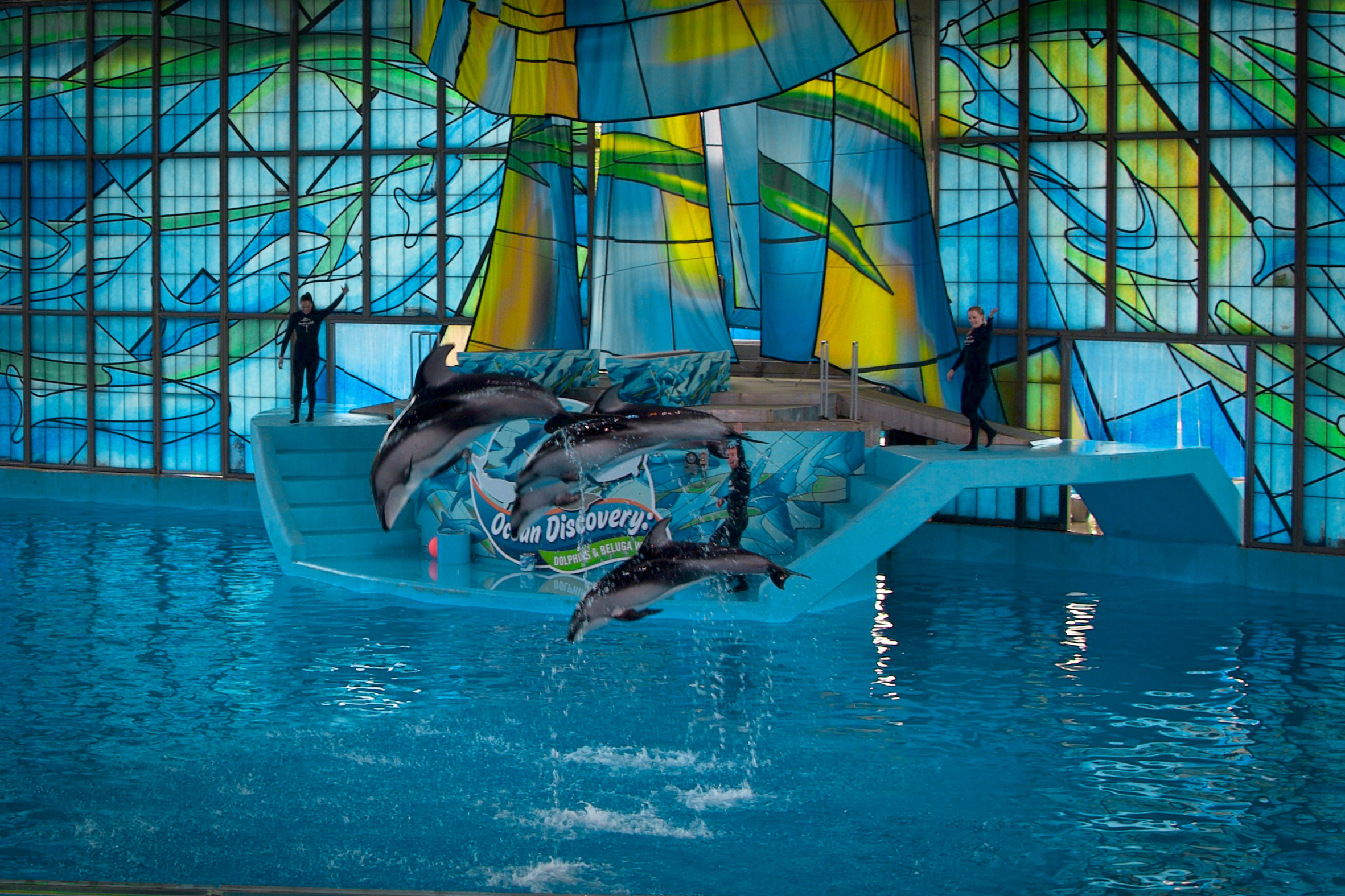 The only other beluga shows we’ve seen were Azul, the show that was replaced by Ocean Discovery, and Chimelong Ocean Kingdom‘s. 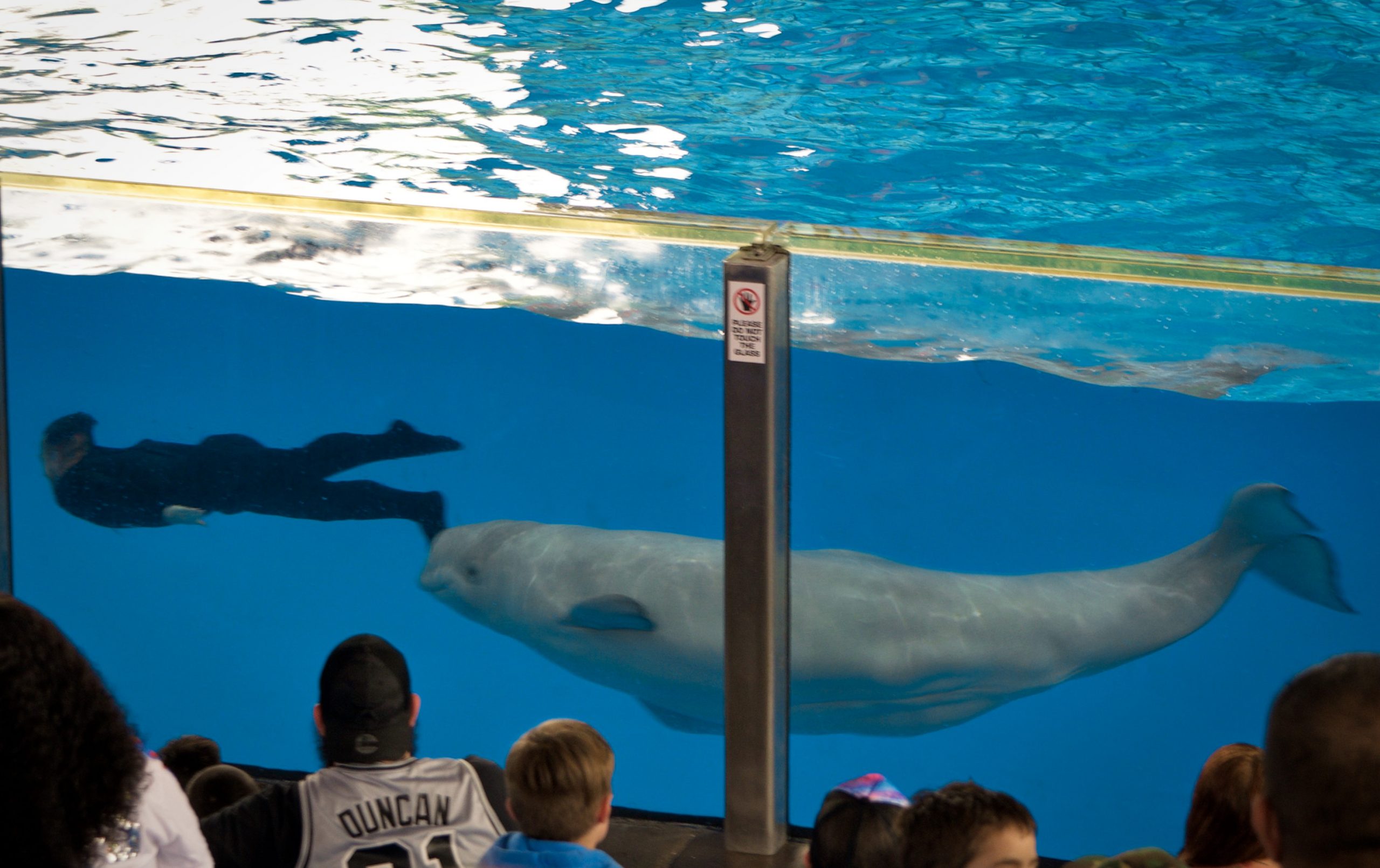 The park’s also home to the Mack Supersplash, Journey to Atlantis. This rendition feels bare and a bit basic, but is still fun. I have a feeling this 2007 installment is the next attraction to get some TLC. 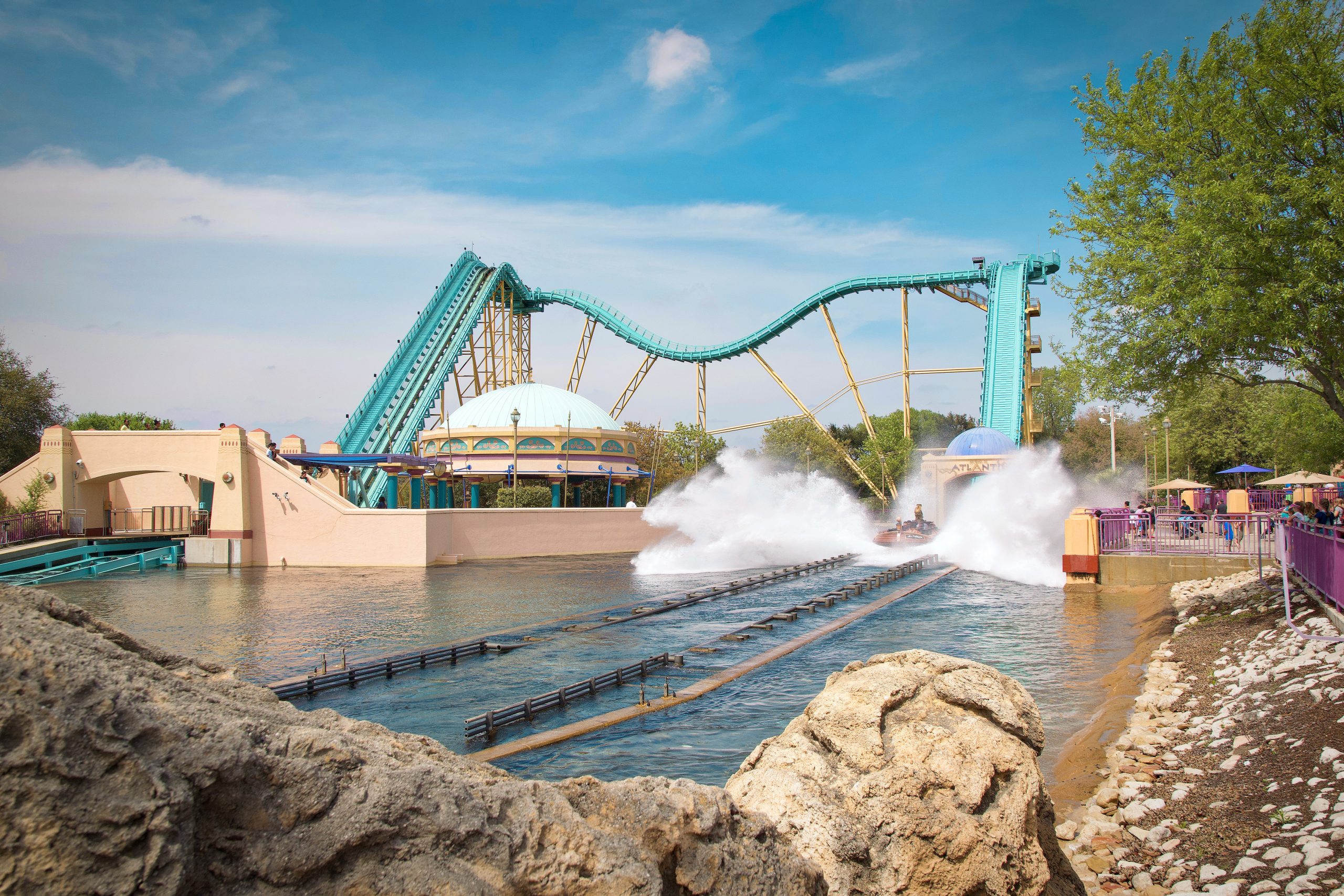 On my last visit I didn’t get the Shamu Express credit, so now was the time. The coaster has recently been renamed Super Grover’s Box Car Derby. 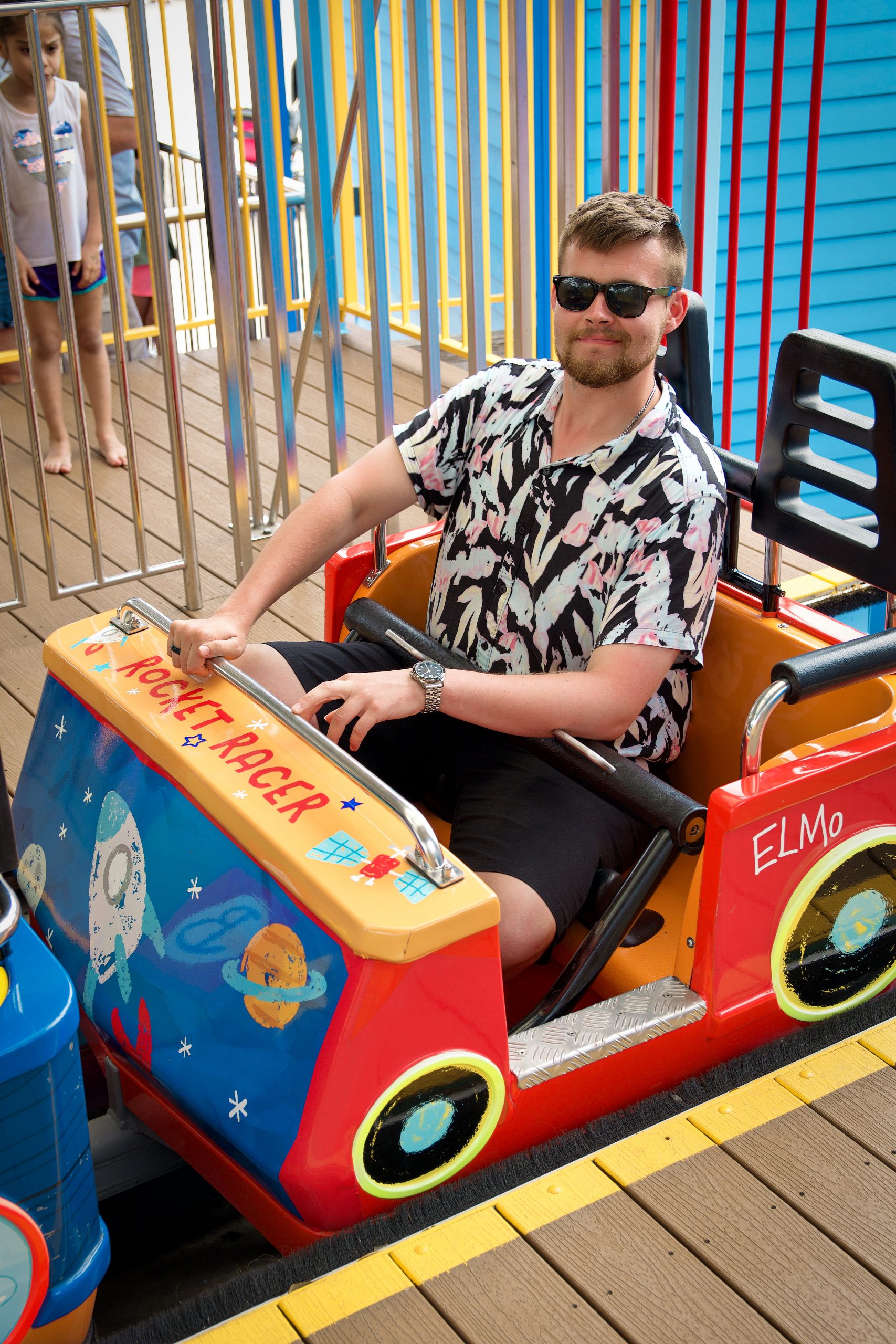 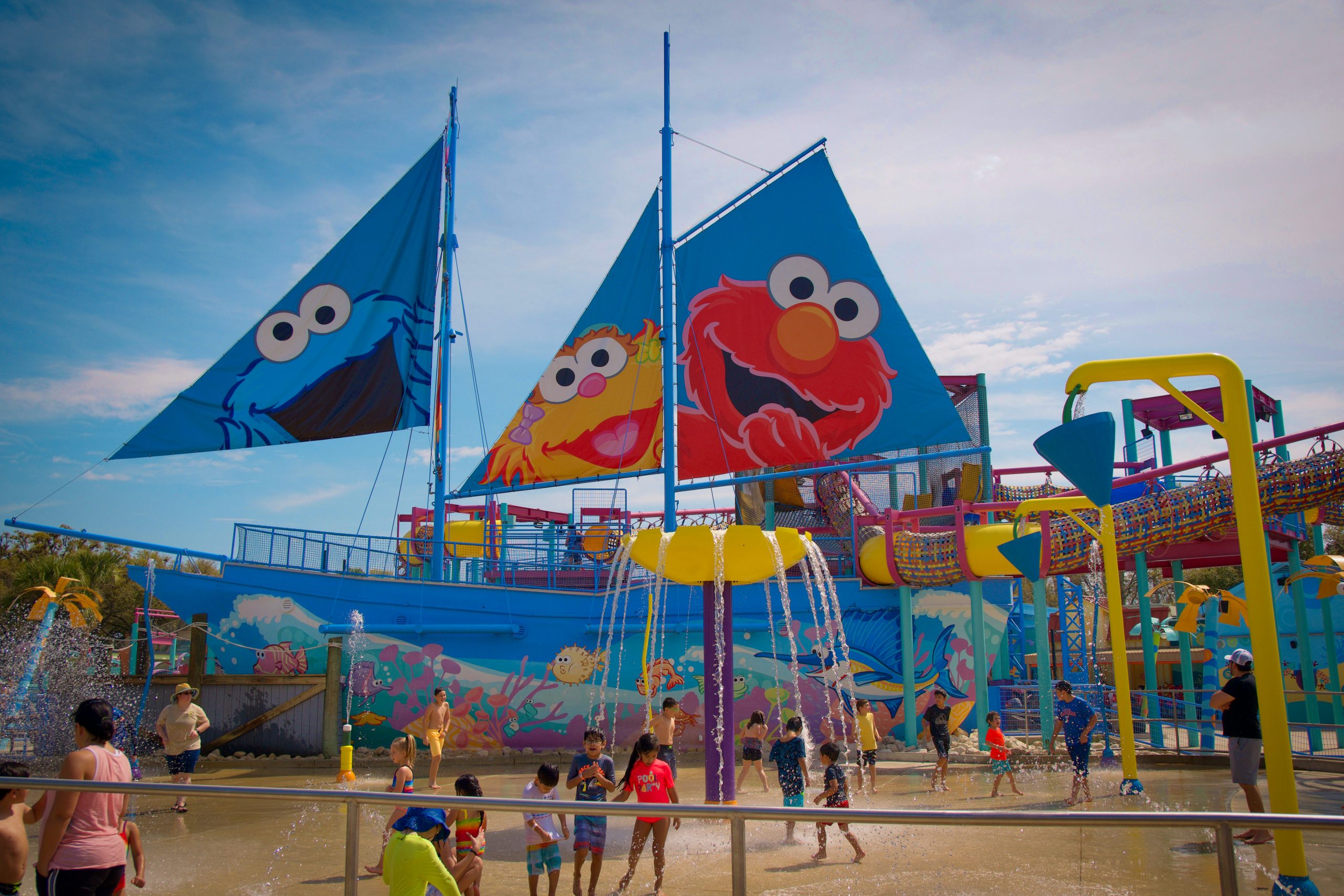 Back to coasters! Great White, located in the back of the park, is the first coaster to ever be in a SeaWorld park, an immediate reaction to the local competition, and it still runs surprisingly smooth. 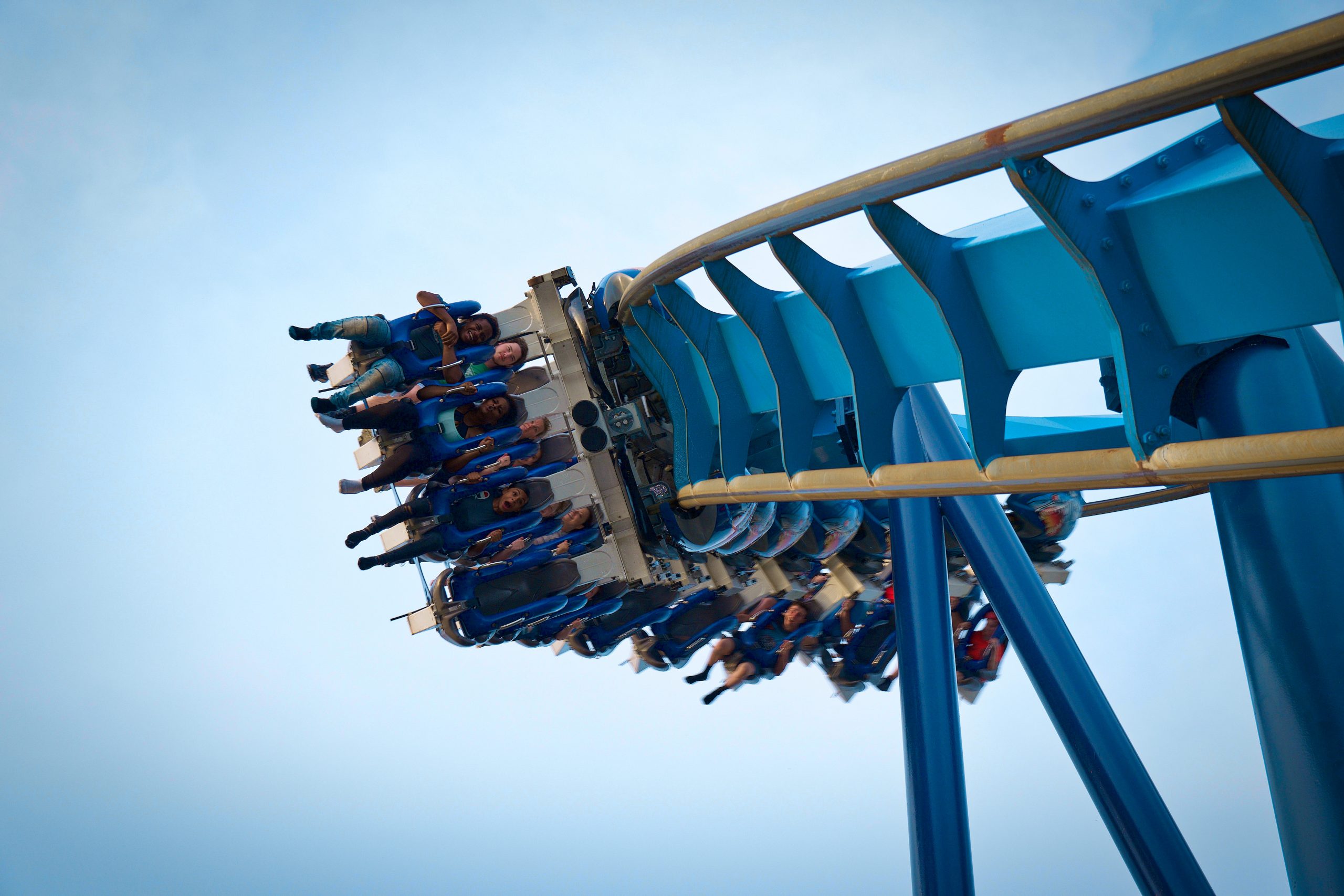 This batman clone is one of three in the state of Texas, one of which is a mere 20 minutes away, but it’s good to know it’s the original in the state. 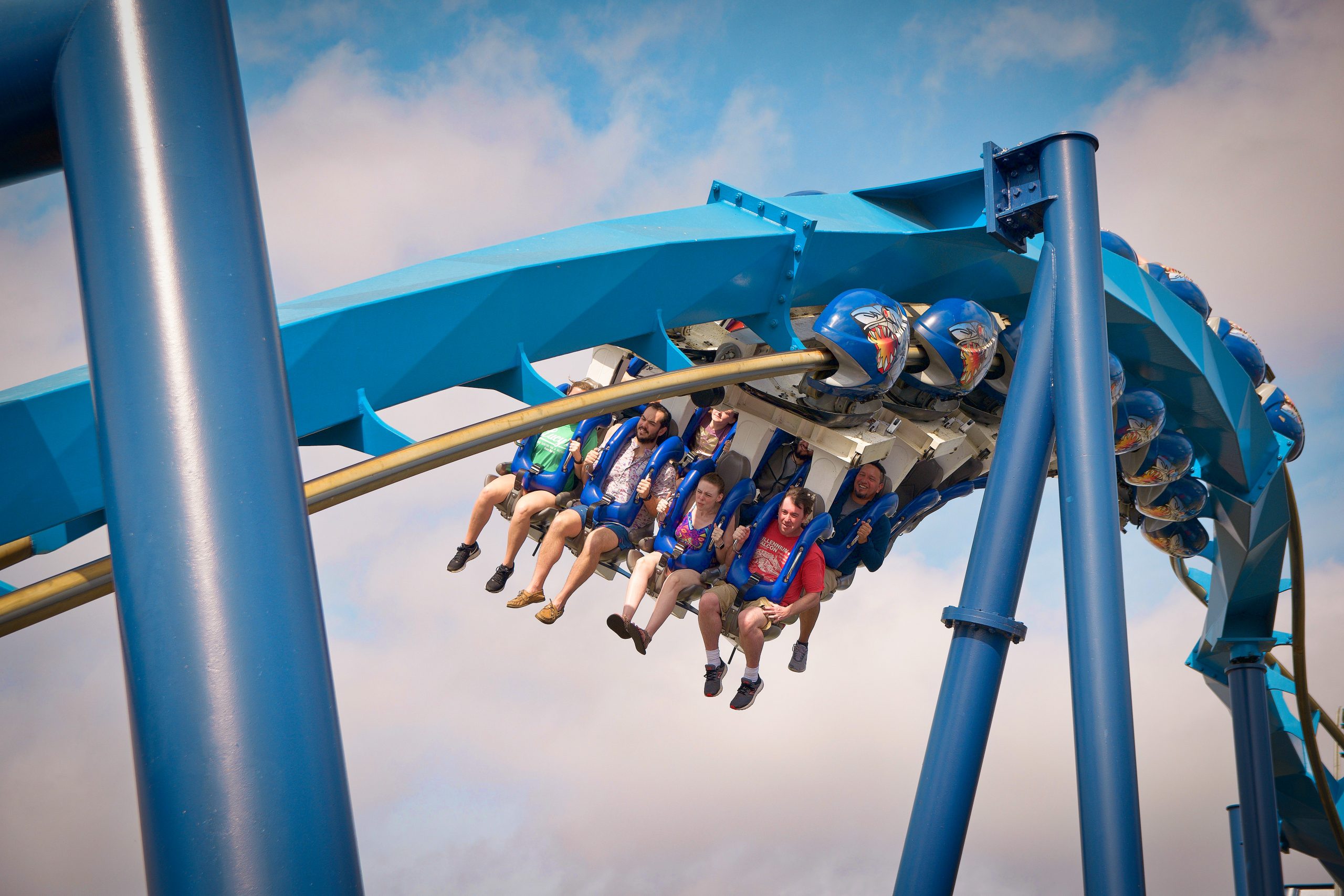 And it’s incredibly refreshing that it has a nice color scheme and station, as well as some actual landscaping vs. gravel and concrete! 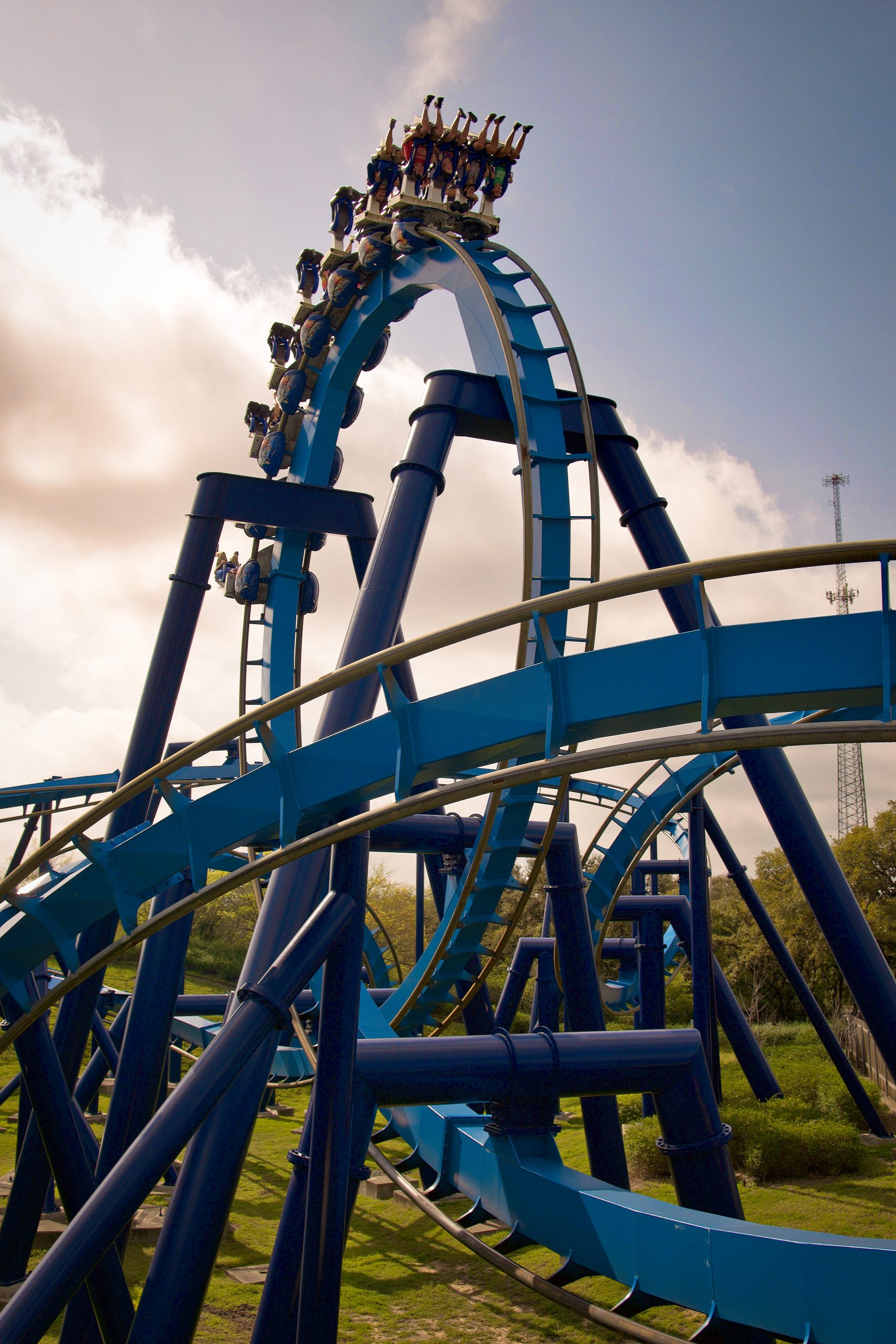 Most of the ride’s hidden from views off the midway, so appreciate this shot from the station! 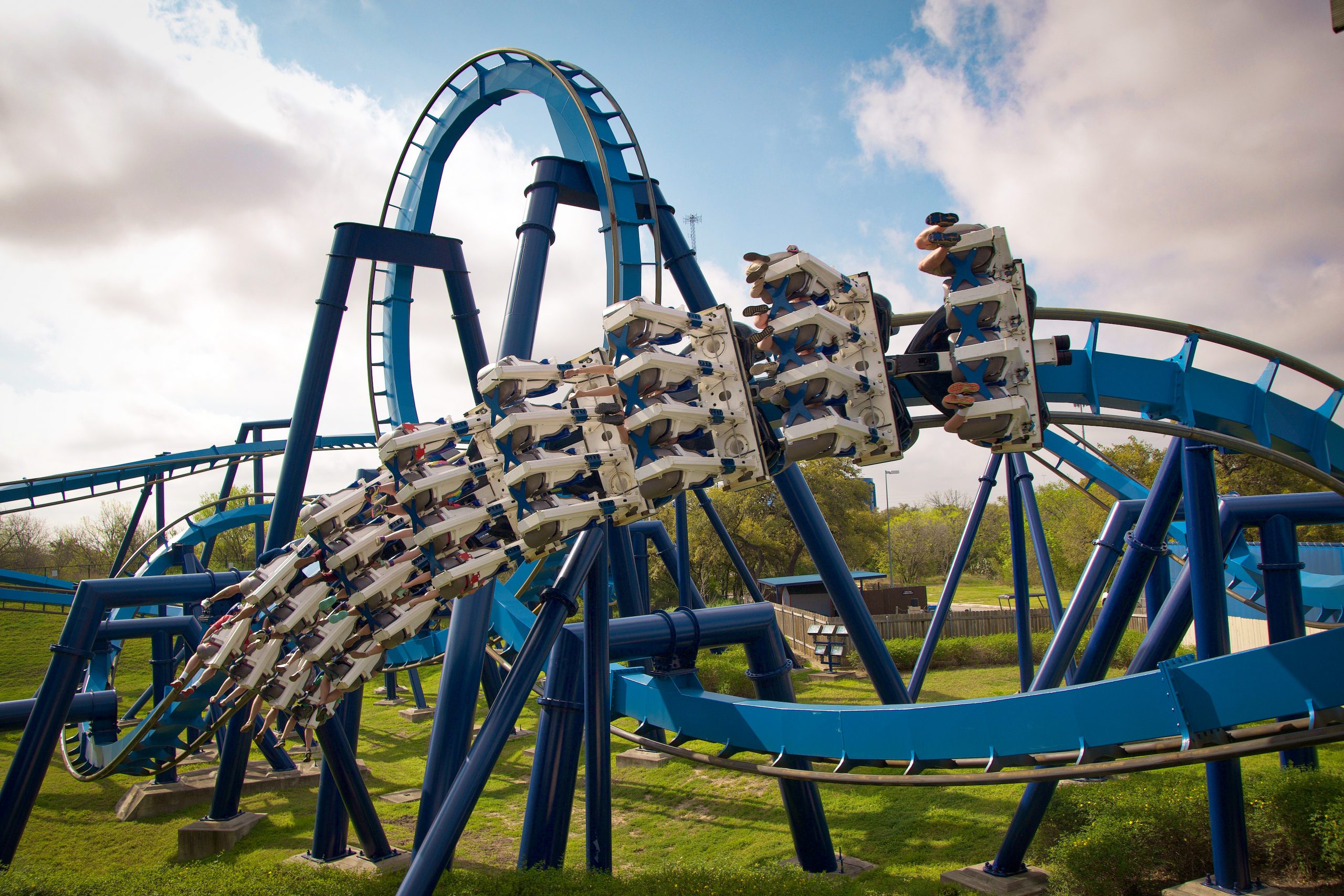 FUN FACT: This version of the ride layout is actually the smallest of its kind, the ride takes a few sharper turns shortening the track layout by about 150 ft., despite being 8 ft. taller than the original at Six Flags Great America in Gurnee, IL. 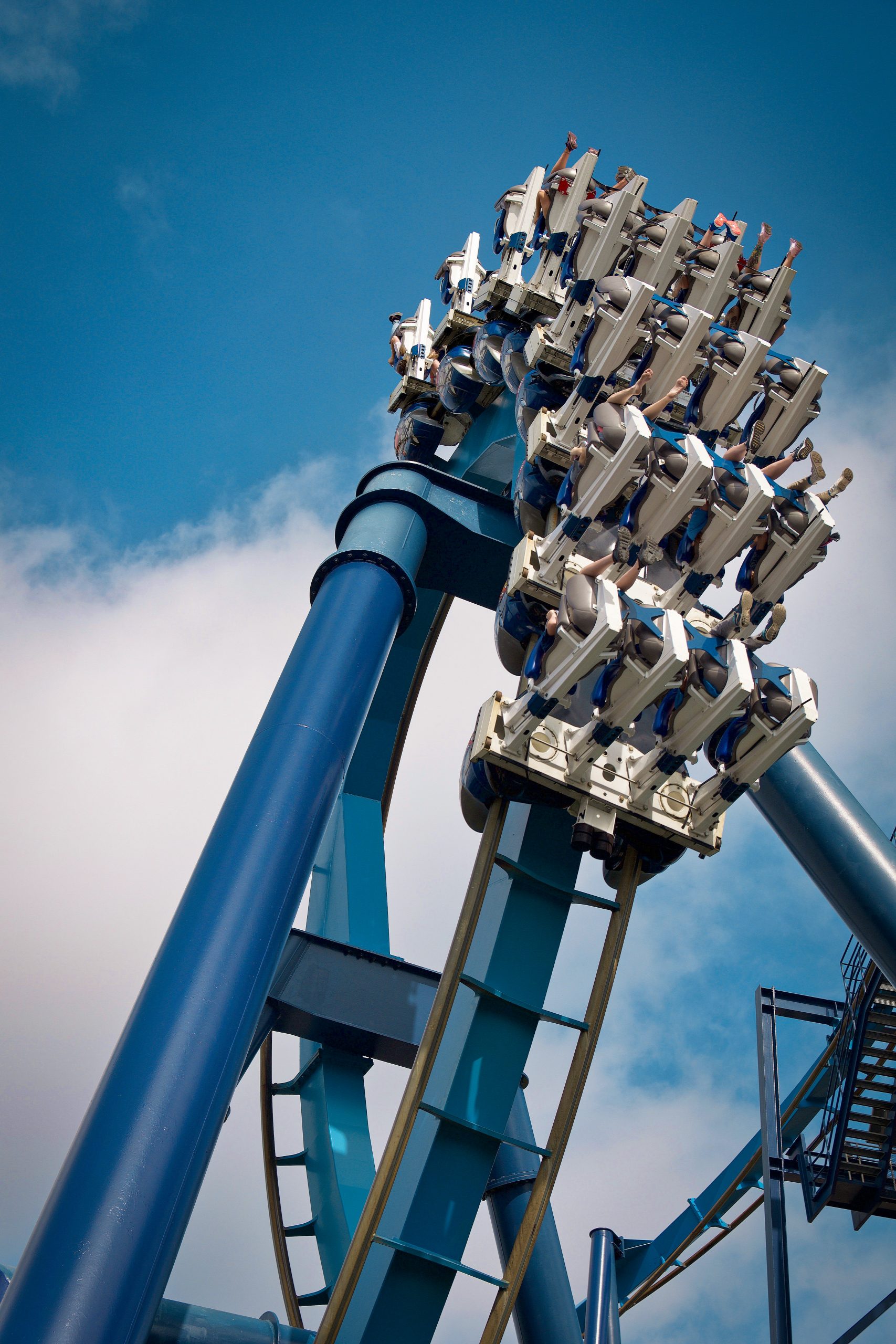 Since our last visit a few years back, a lot has changed, including this newest area of the park connecting Rio Loco with Orca Stadium. SeaSwinger was added in 2019: 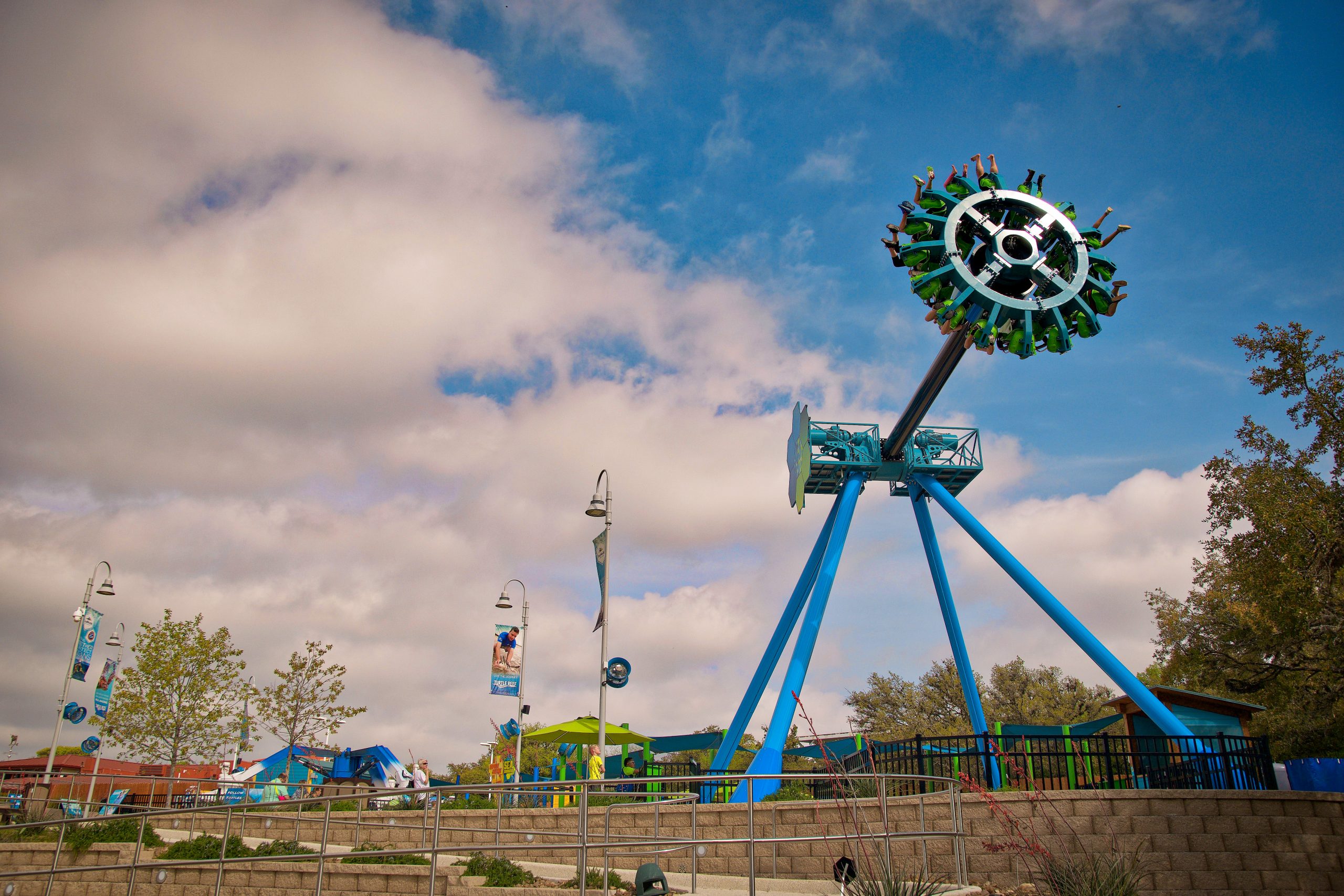 Along with Turtle Reef: 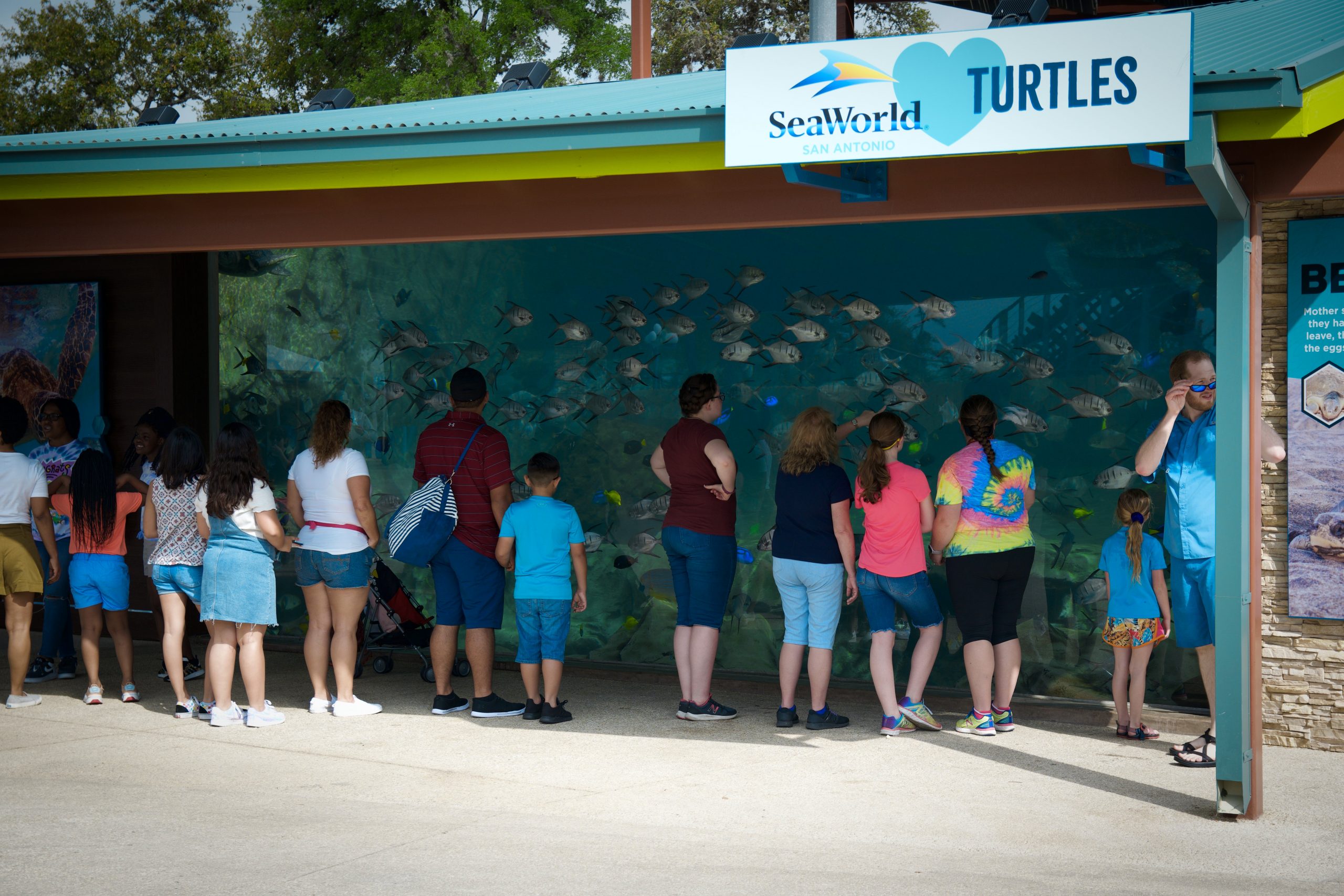 And RipTide Rescue! A fun little collections of attractions that really assisted in sprucing up the park. 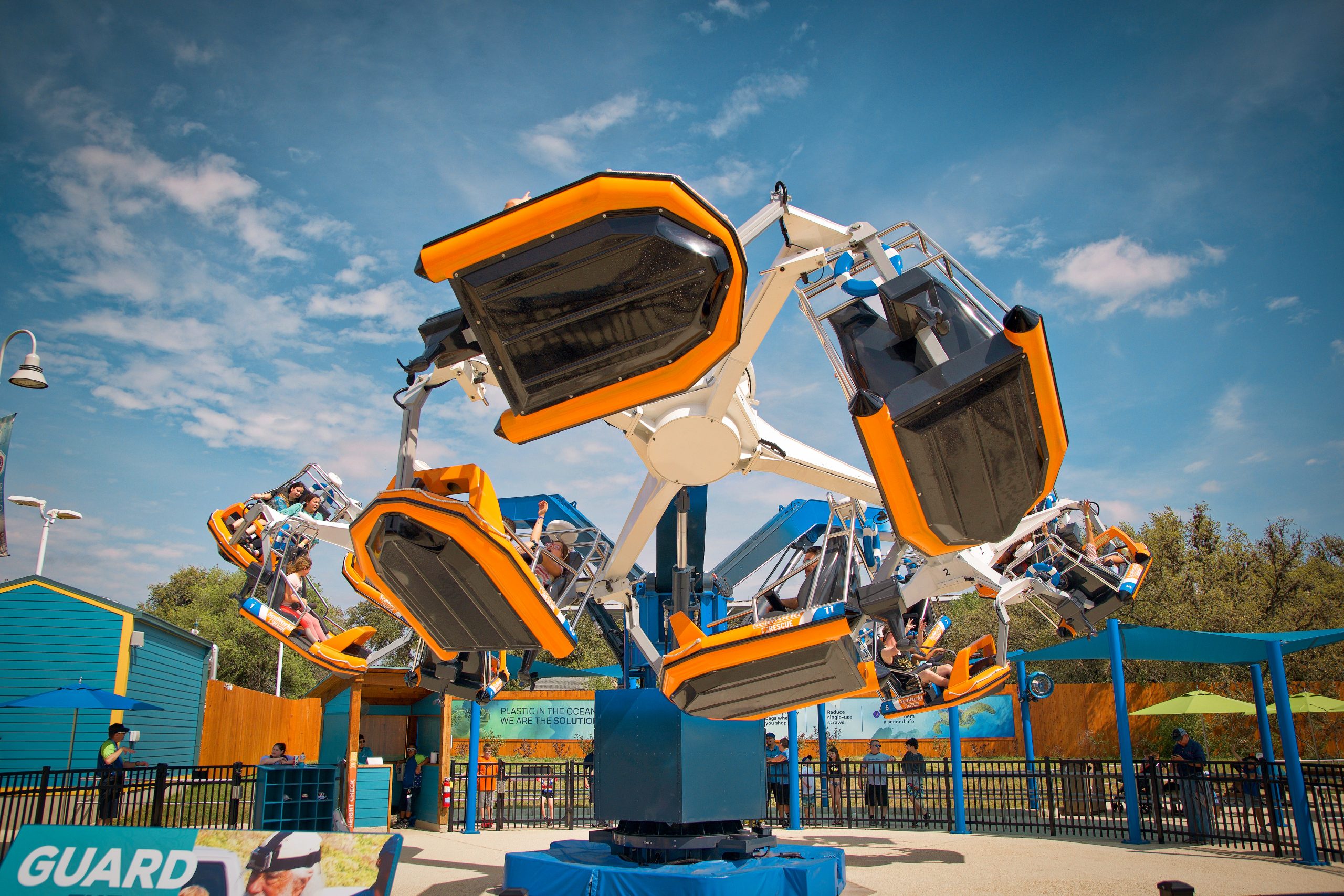 This year the park added Texas’ longest, tallest, and fastest wooden coaster to complete the Texan coast themed area, and we couldn’t be happier. Texas Stingray is one of the country’s best wooden coasters. 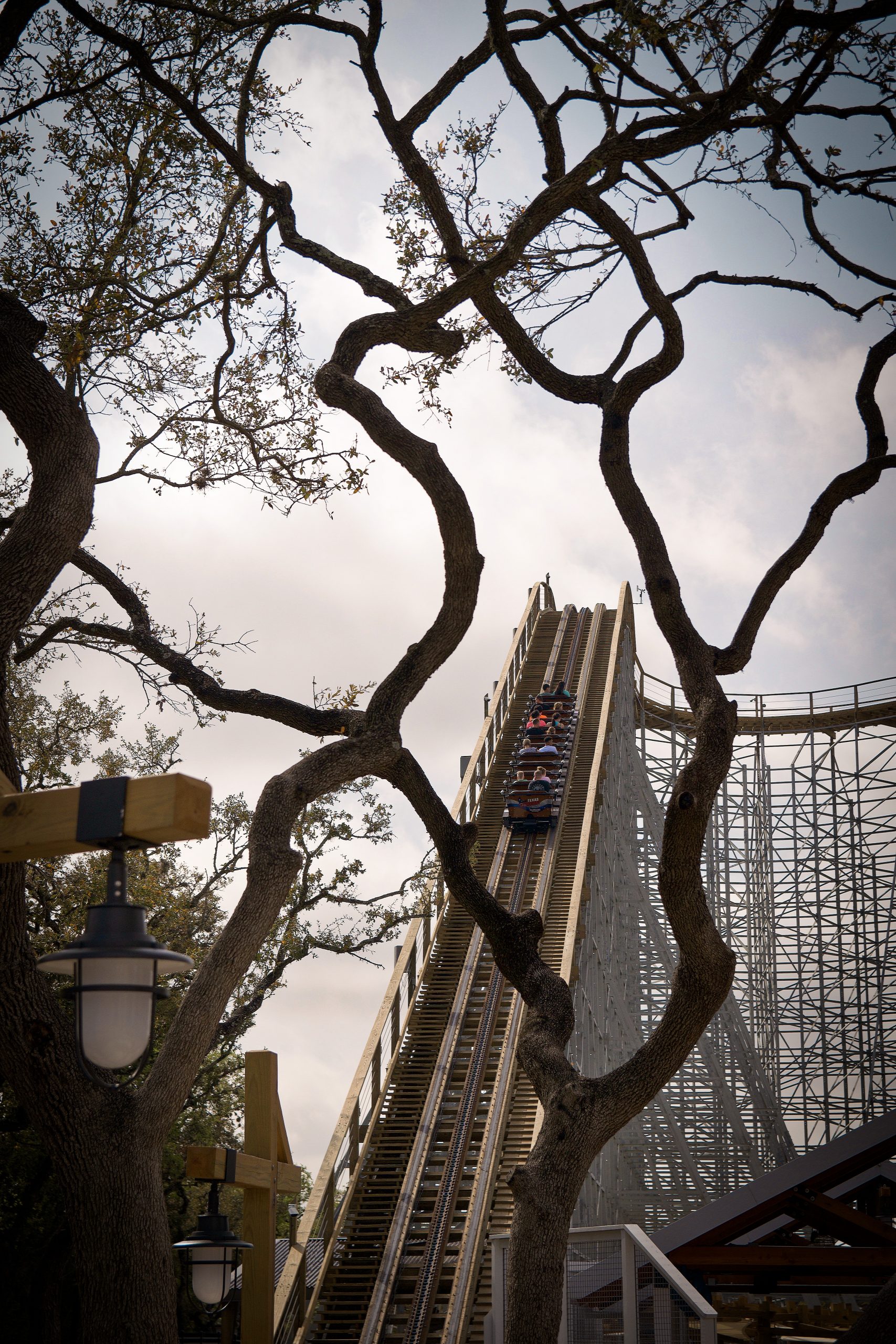 We have already launched a full review of Texas Stingray, here! But we still wanted to show you some of the great integration in this report. 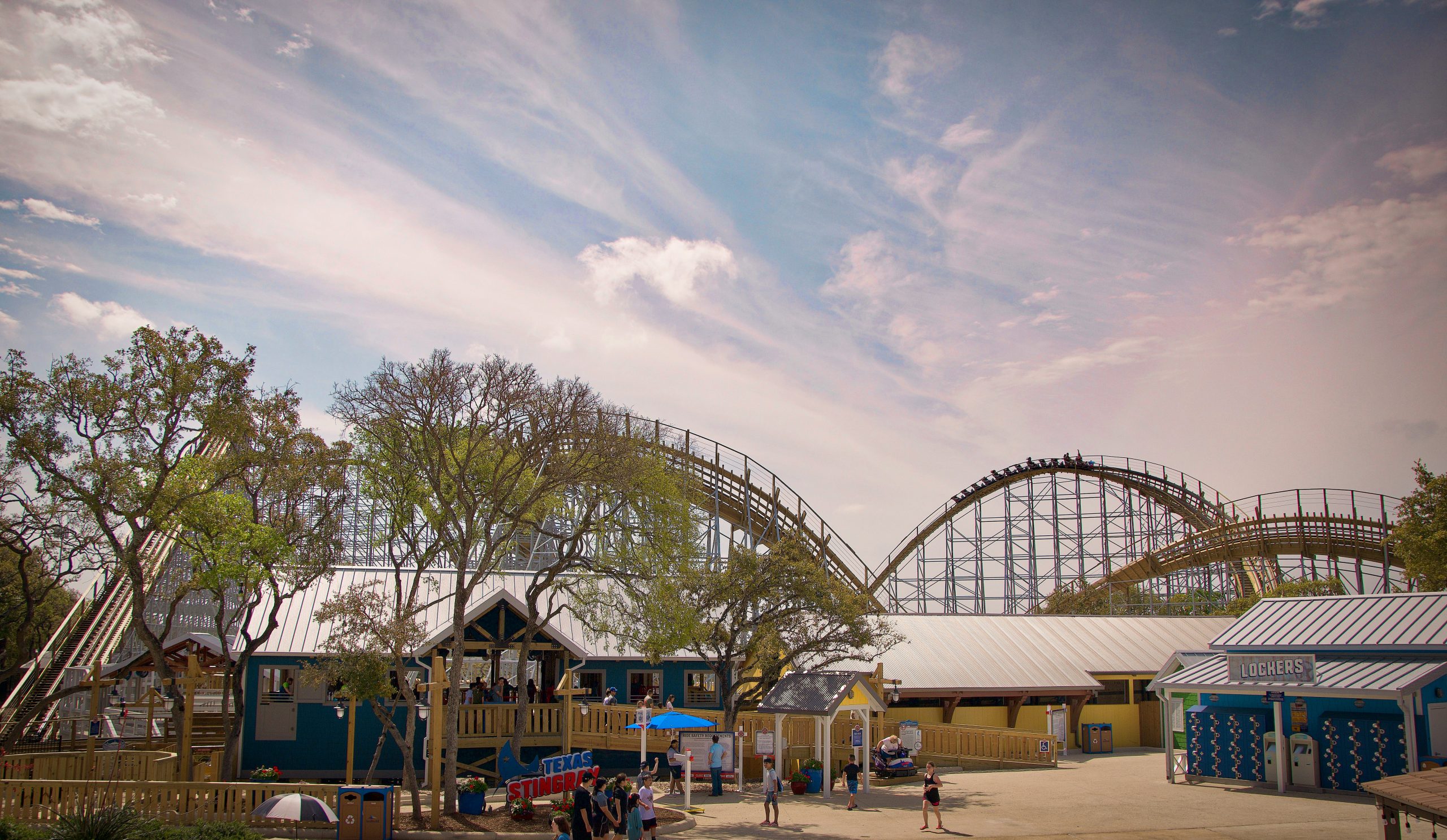 The ride has some of the best balances between airtime and lateral movements, and keeps up its pacing throughout the entire ride. The coaster feels unique to other woodies and does not at any point feel repetitive. Great Coasters International and SeaWorld San Antonio really did a fantastic job. 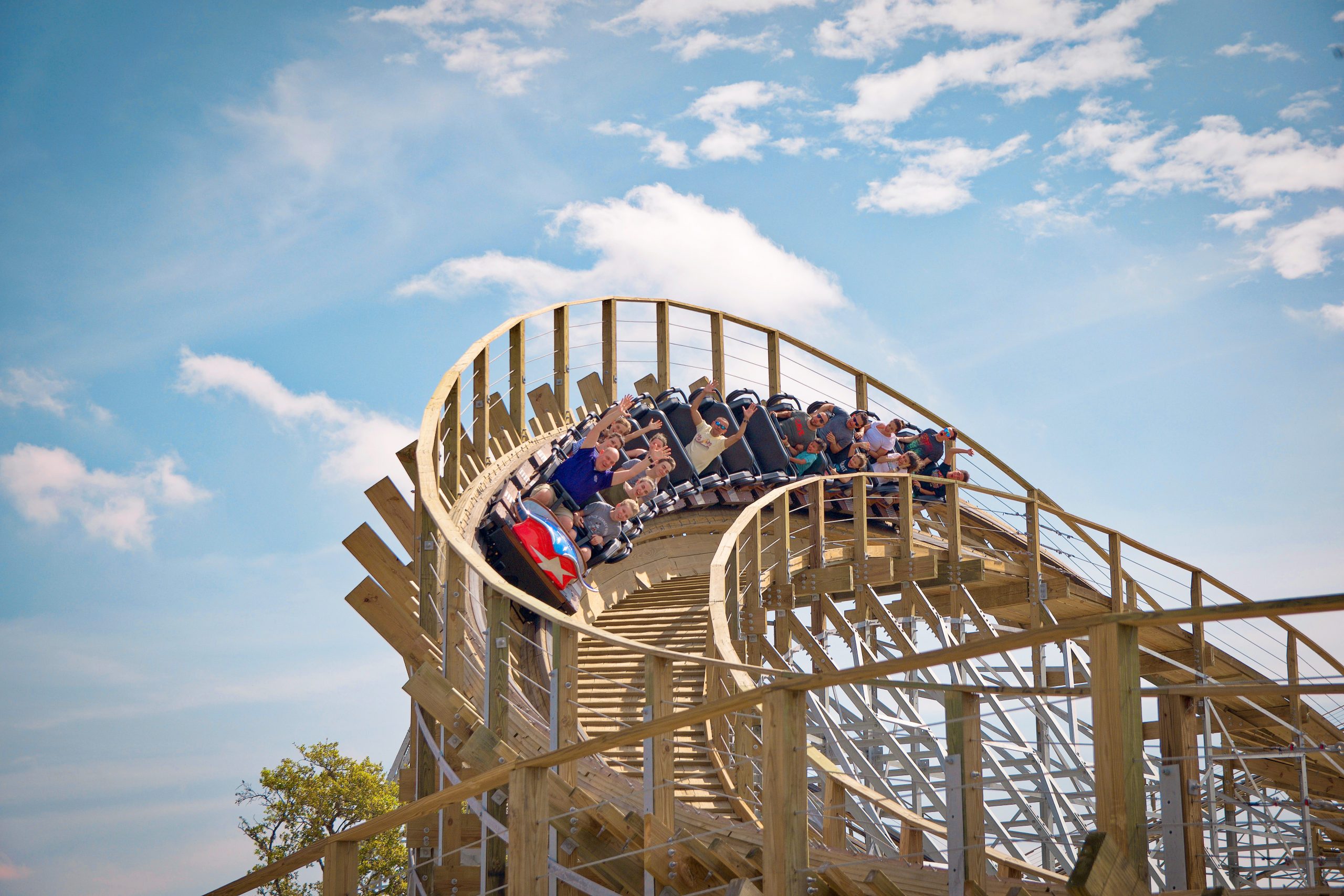 The 3,379 ft. long coaster is actually a terrain coaster with quite some changes in elevation and was designed well ahead of the name being chosen. The waving wings of the ride’s sprawling layout made it a no-brainer to name the ride Texas Stingray.

The park preserved many of the trees around the plot, and the nice combination of the trees with the gravel and other landscaping elements made for a very pleasant appeal! 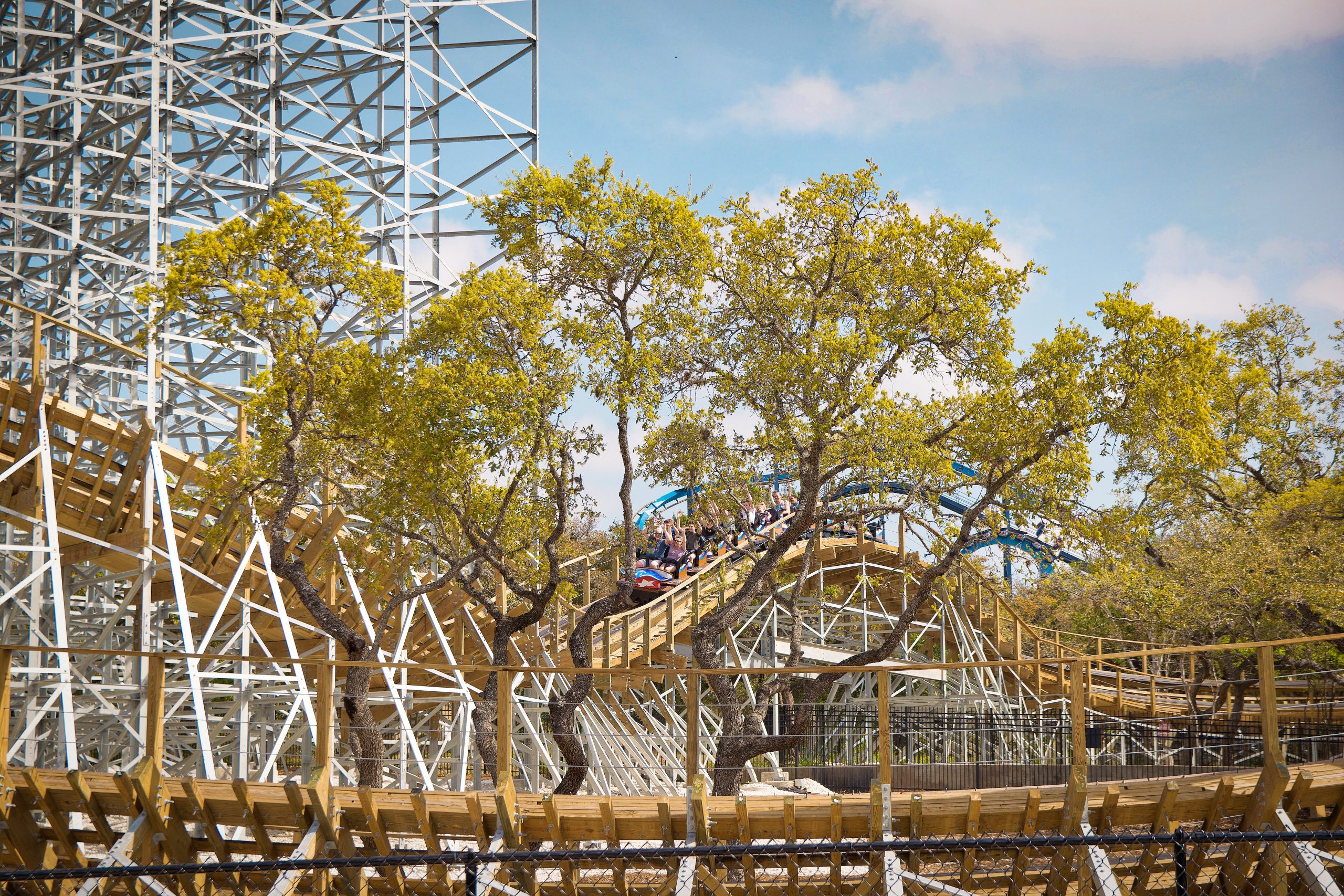 Thank you SeaWorld San Antonio for having us, and allowing us to have a backstage look at your amazing new wooden coaster: Texas Stingray! 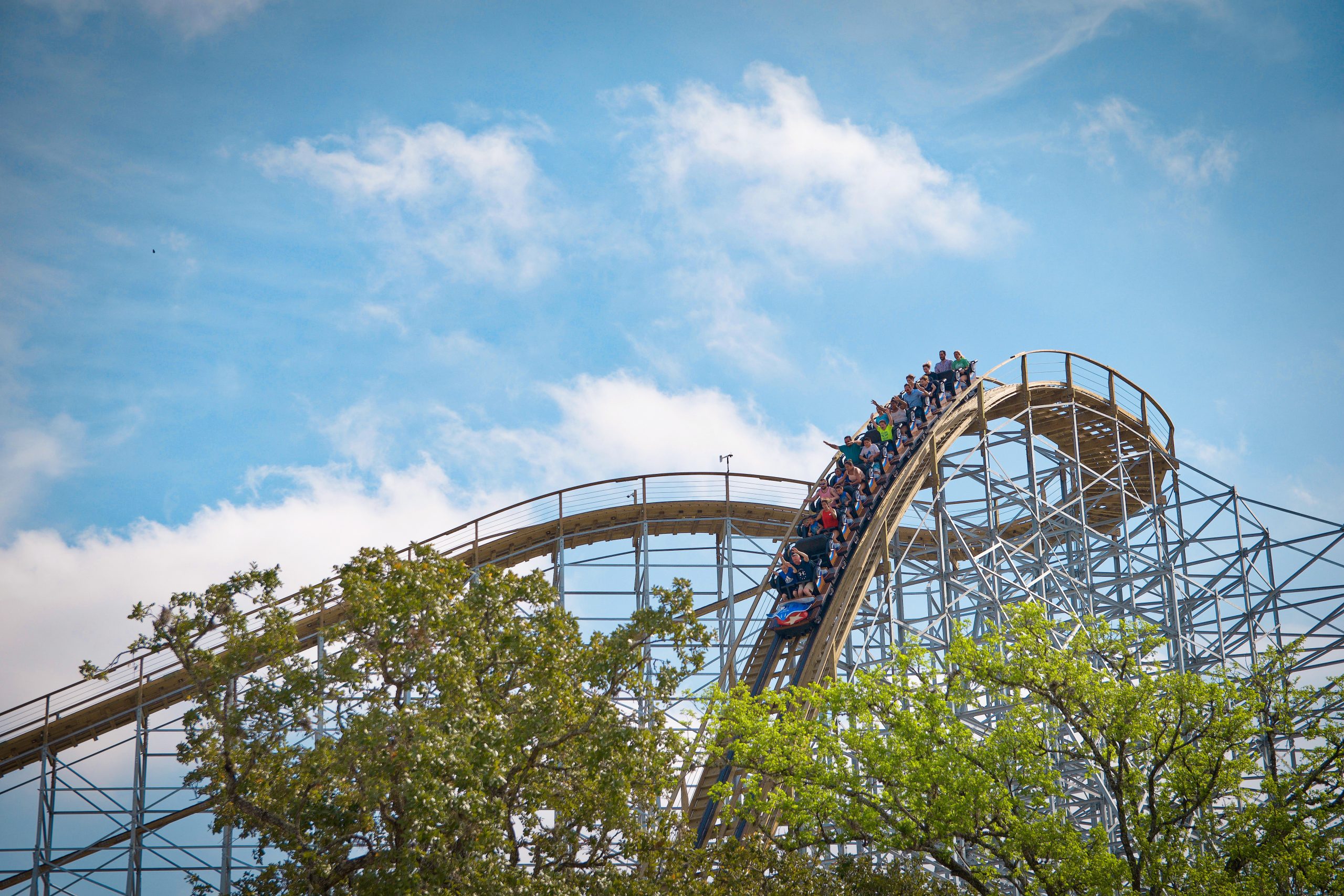 Thank you for checking out this SeaWorld San Antonio report! Check out some of our other new reports and articles: