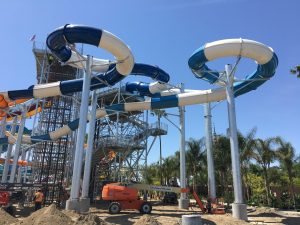 Sean/McLaren: We swung by Knott’s Tuesday to see what was going on during this nice afternoon in Southern California, and to see if Boomerang deconstruction had progressed at all since its closing, after operations ended on April 23rd. In this Update we’ll also take a look at the awesome progress being made on Knott’s Soak City. Which is receiving 7 new slides this year!

Turns out, Boomerang had already lost a part of its cobra roll only two days after closing. 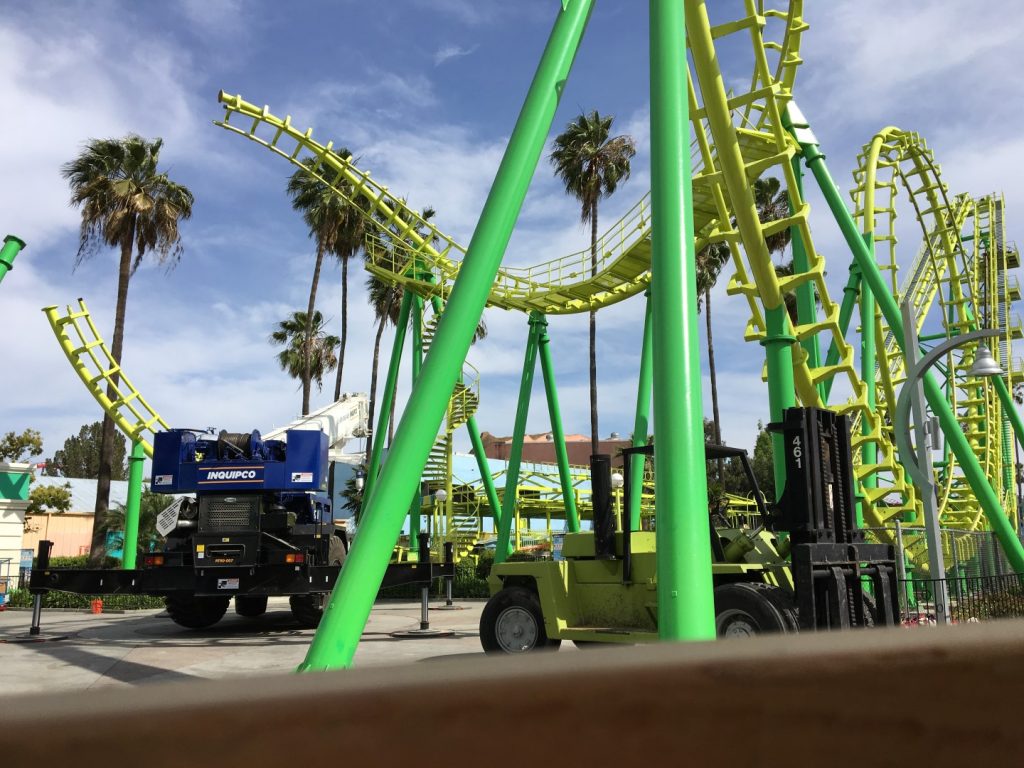 It was a bit sad to see the coaster get dismantled. We always liked the ride. Nonetheless, a large new ride (hopefully coaster) is expected to fill up the Boomerang and Riptide spots. 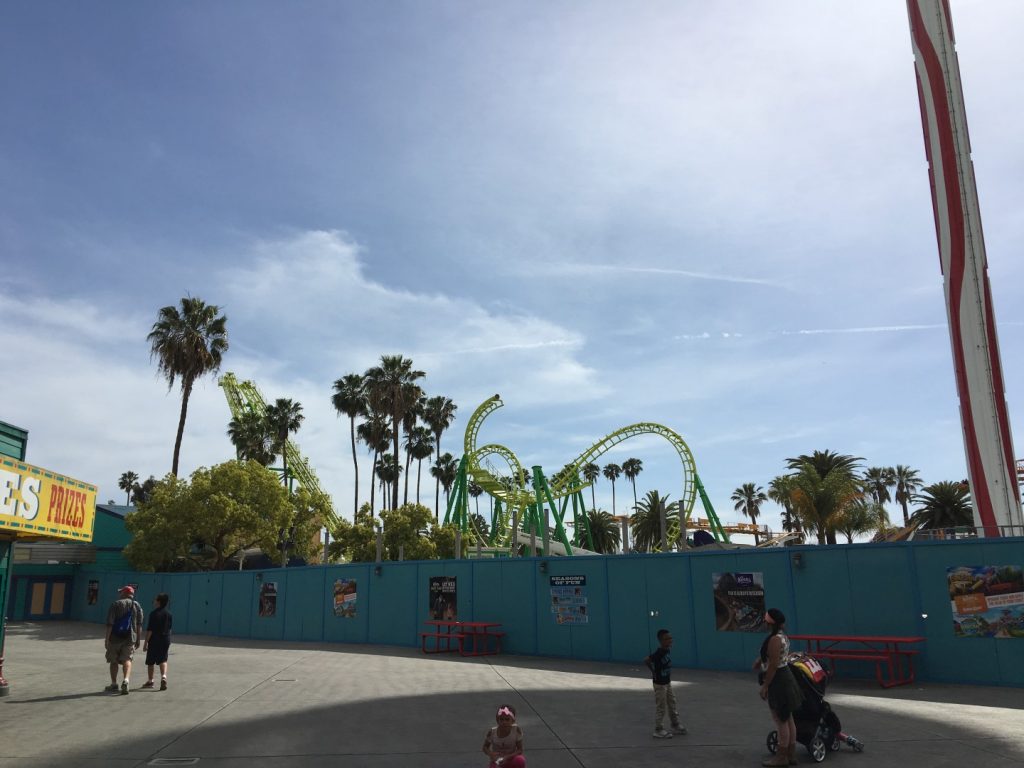 As we mentioned before we have a strong feeling Boomerang will be relocated to another Cedar Fair property with MK1212 trains. If you want to learn more about MK1212 trains and how they’d benefit Viper for example, click here. 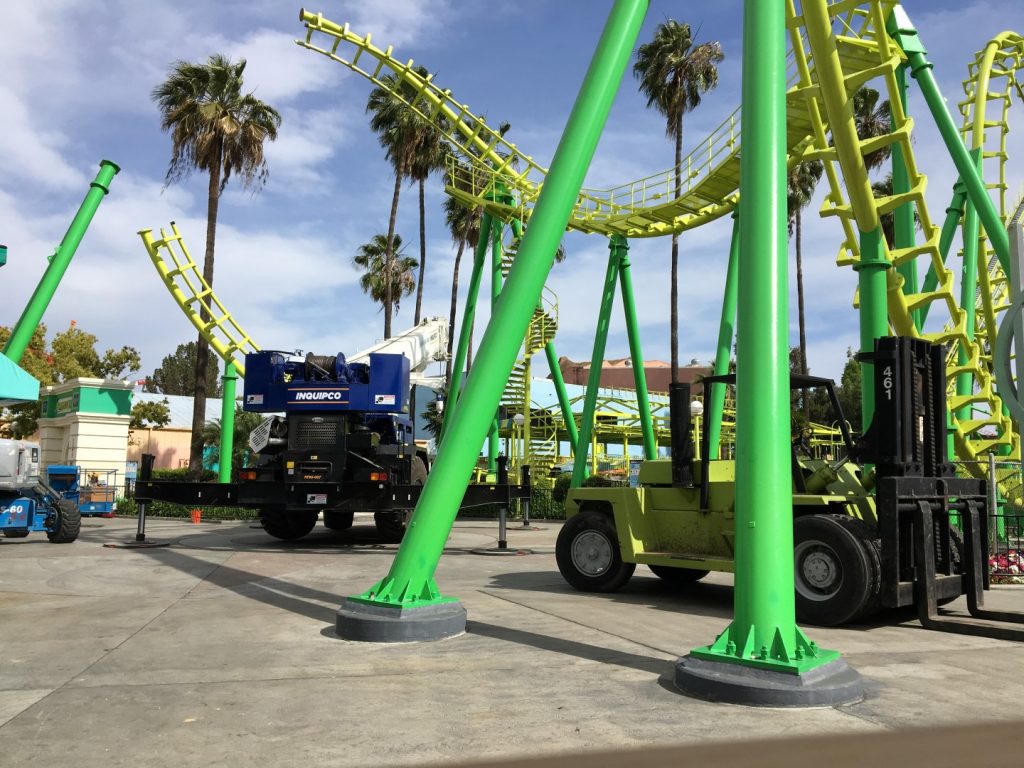 Right next to Boomerang the construction of Boardwalk Barbecue continues. They’ve been taking their time with this project, and I’m almost starting to wonder if the area may be used for future ride development to an extent. 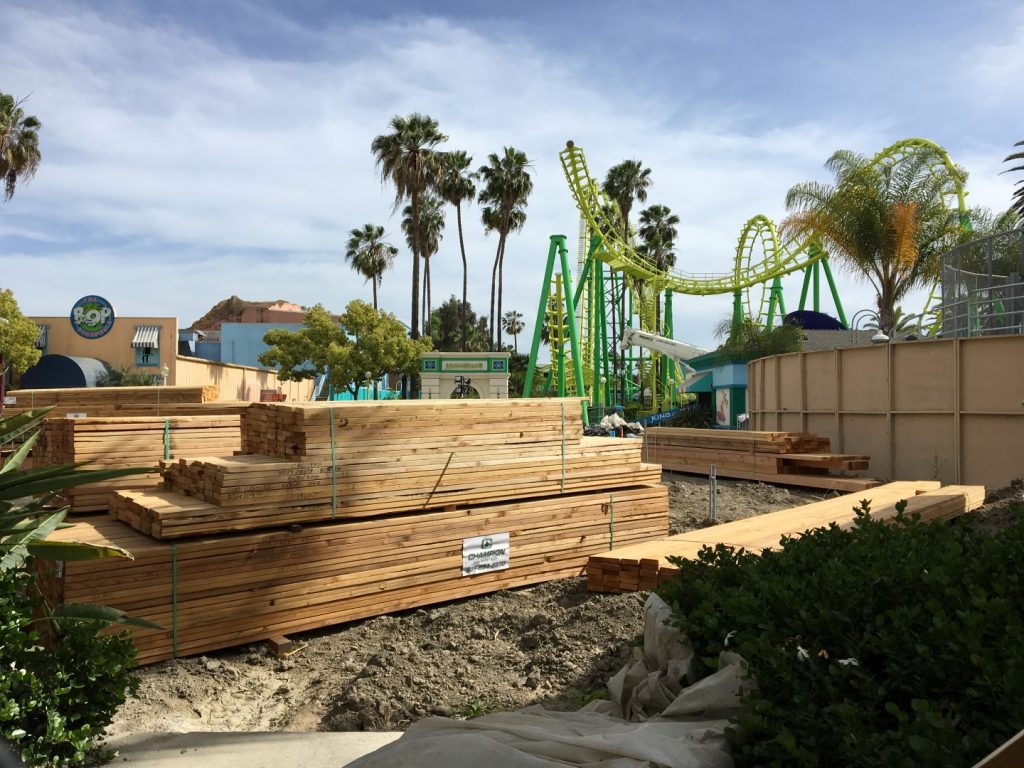 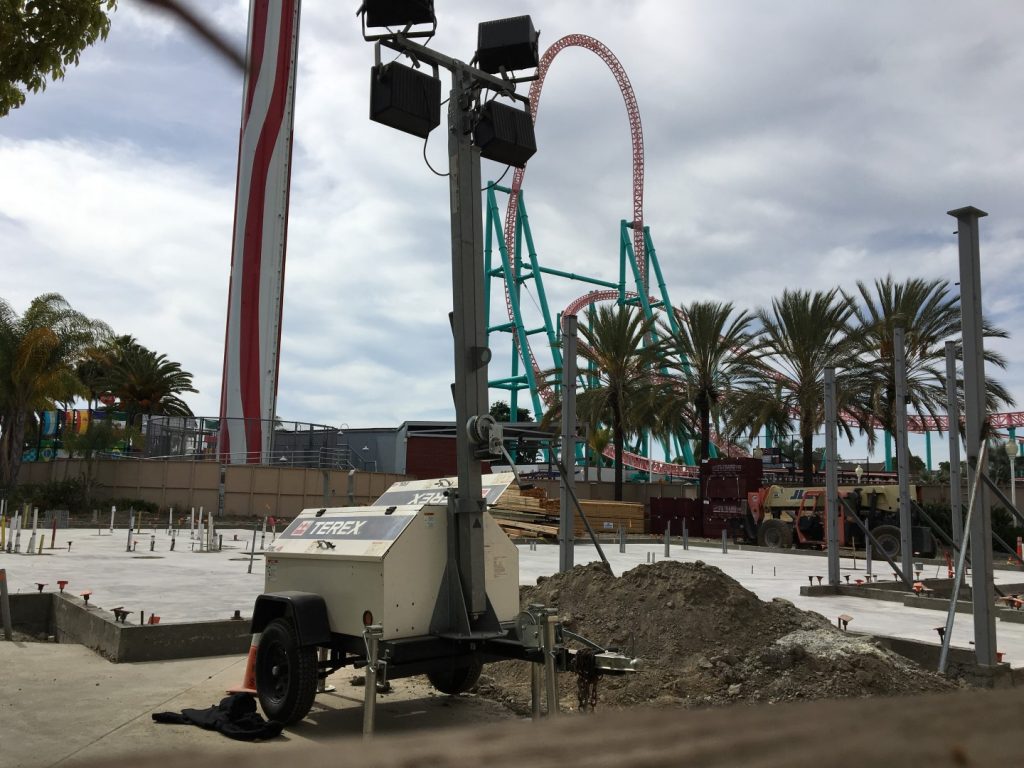 Around the park over the past week, we saw some work being done on a couple rides. Our guess is that Knott’s is trying to knock out some last minute maintenance now that the spring break rush has concluded and the summer crowds have yet to arrive. Wave Swinger’s seats were removed and taken apart. 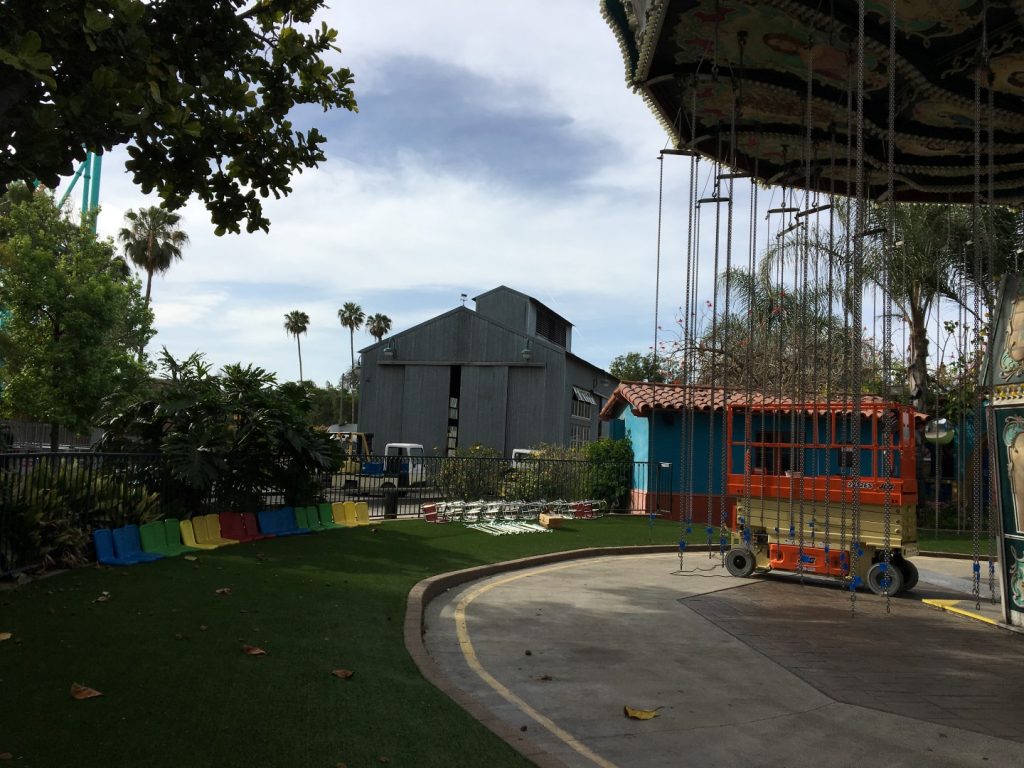 As we discussed in a recent park update, the ride was painted a dark shade of green and looks fantastic. We can’t wait to see it in action again soon. 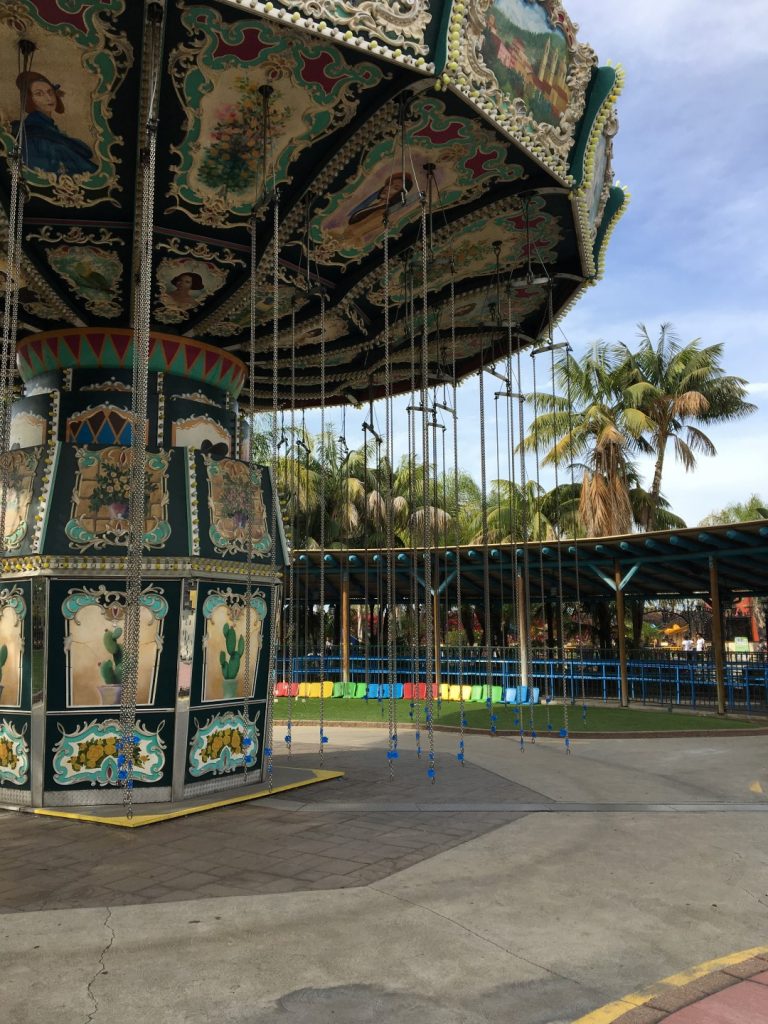 Xcelerator took a day off as well as both trains were removed from the tracks. It’s been running two trains consistently lately. Something that’s exciting to see after years of mostly one train operations. 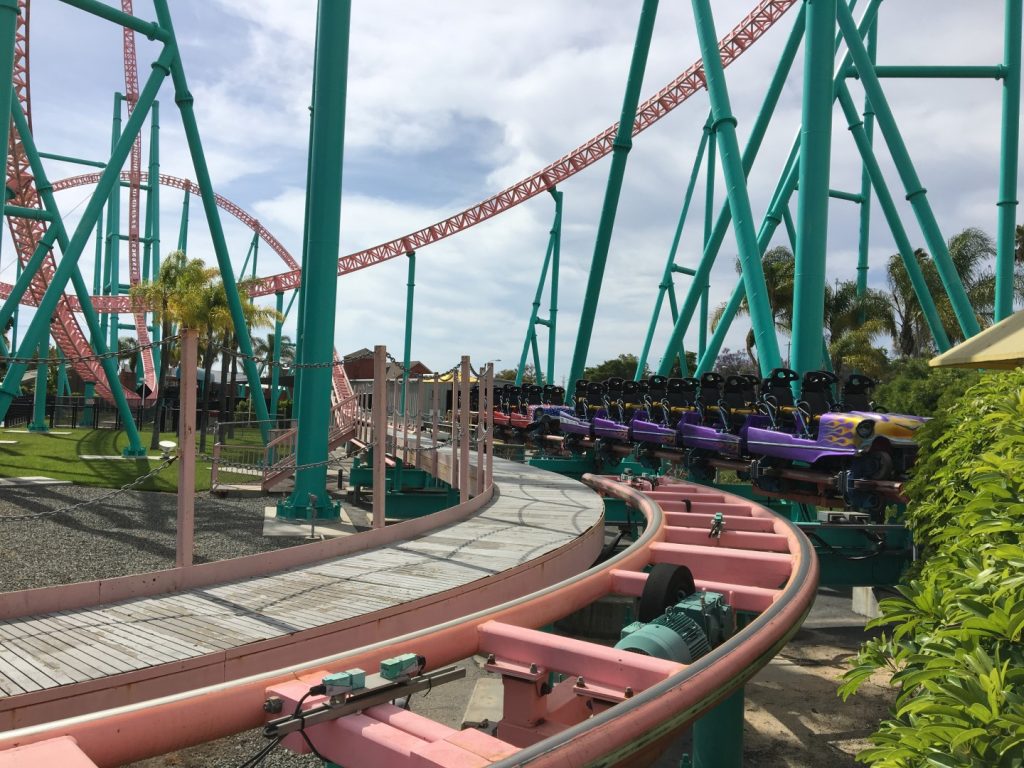 Supreme Scream AND Silver Bullet both dropped back to one train/vehicle operations during the week; its that in between spring and summer lull now the Boysenberry Festival has ended. 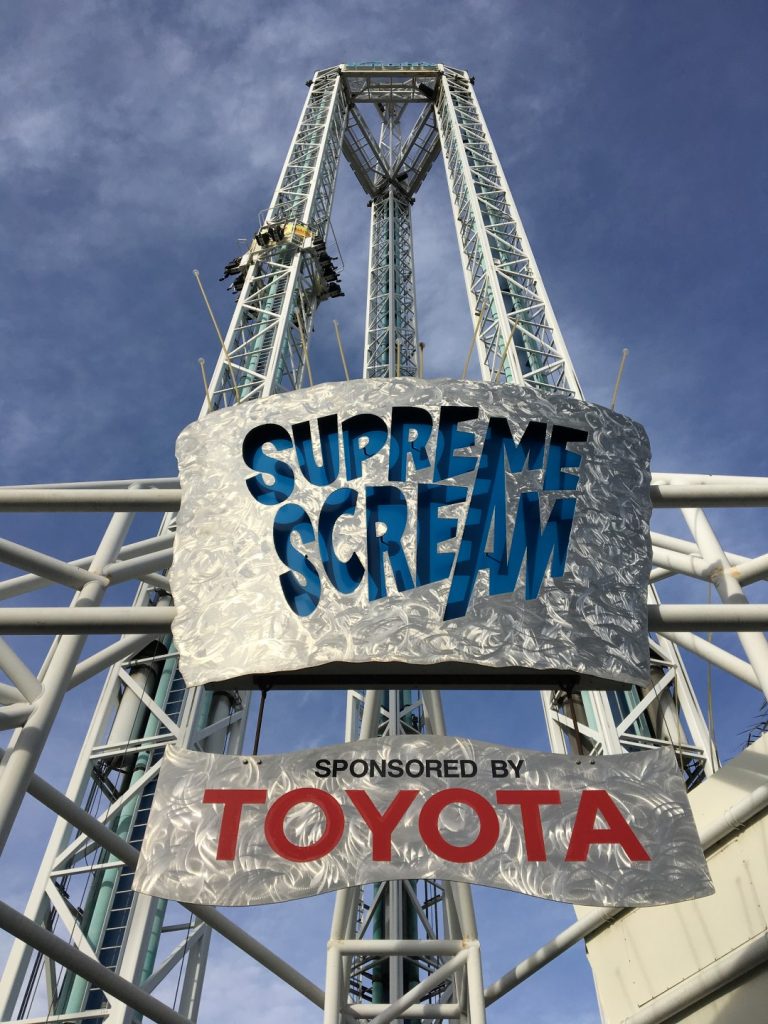 Like most great new attractions, SolSpin had a couple hours of downtime today. One of the mechanics said they were having difficulties with the restraint locking mechanism on one of the arms. Check out our recent review of the ride, here! 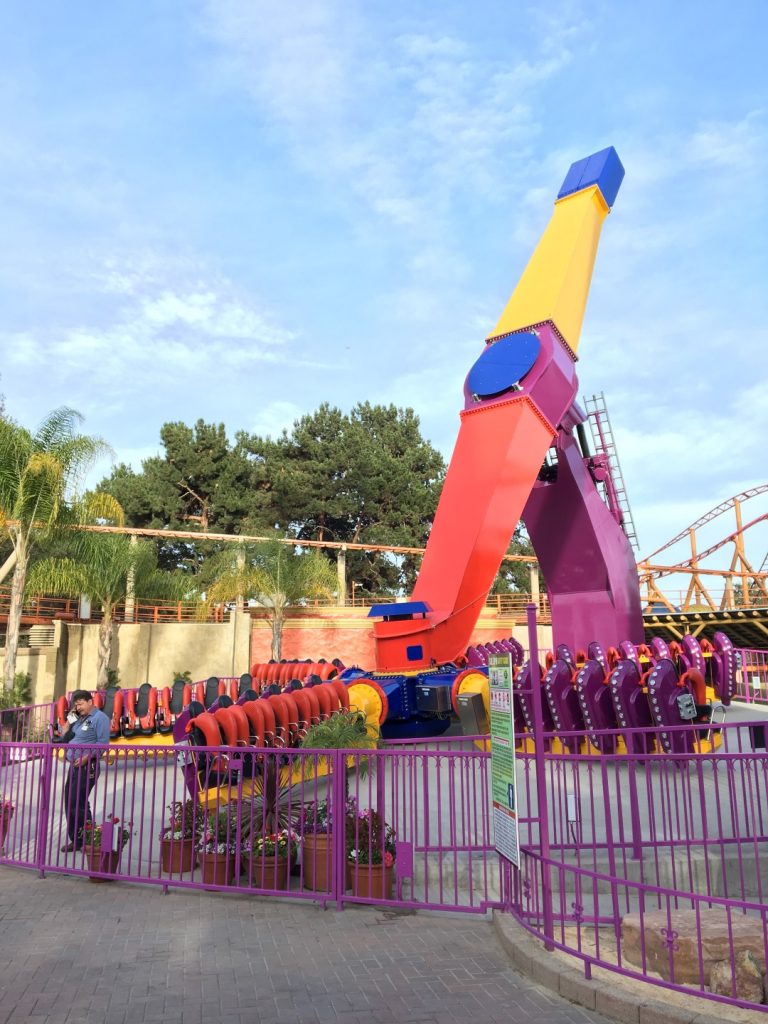 Knott’s Soak City’s expansion has progressed majorly as only a couple pipes and slide sections are now left in the parking lot! 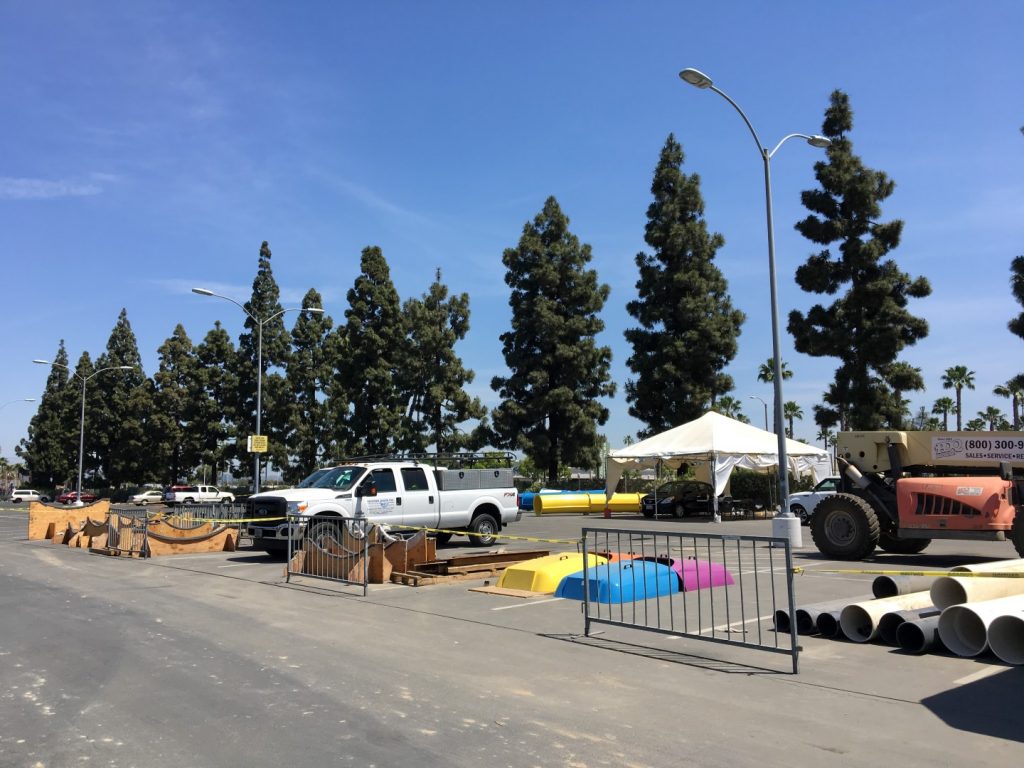 Check out these nice new looking slides! Kudos to the Soak City construction crew working in the hot California sun trying to get it ready for summer! 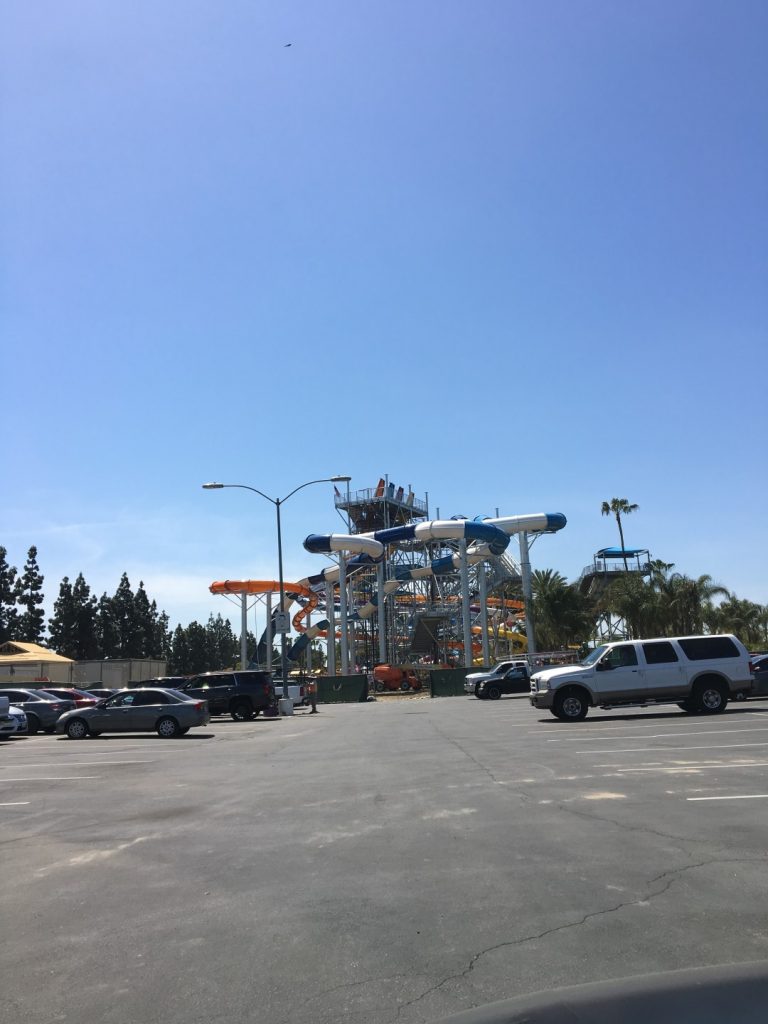 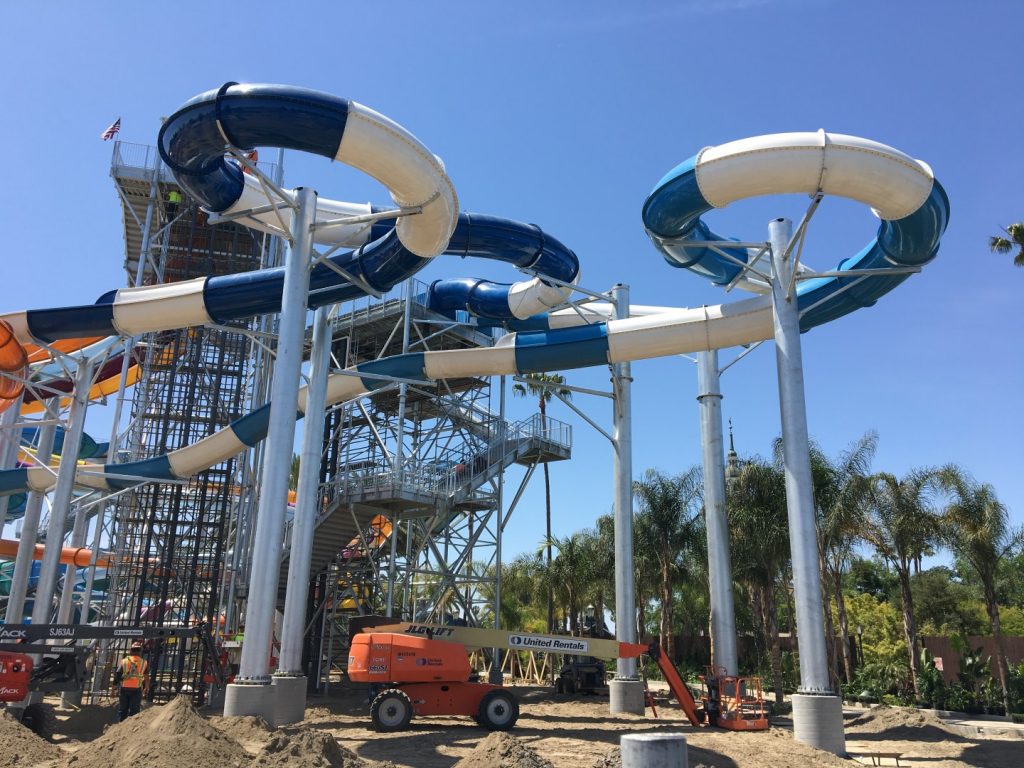 Besides all the new slide construction, the vast majority of the preexisting slides have been repainted too. 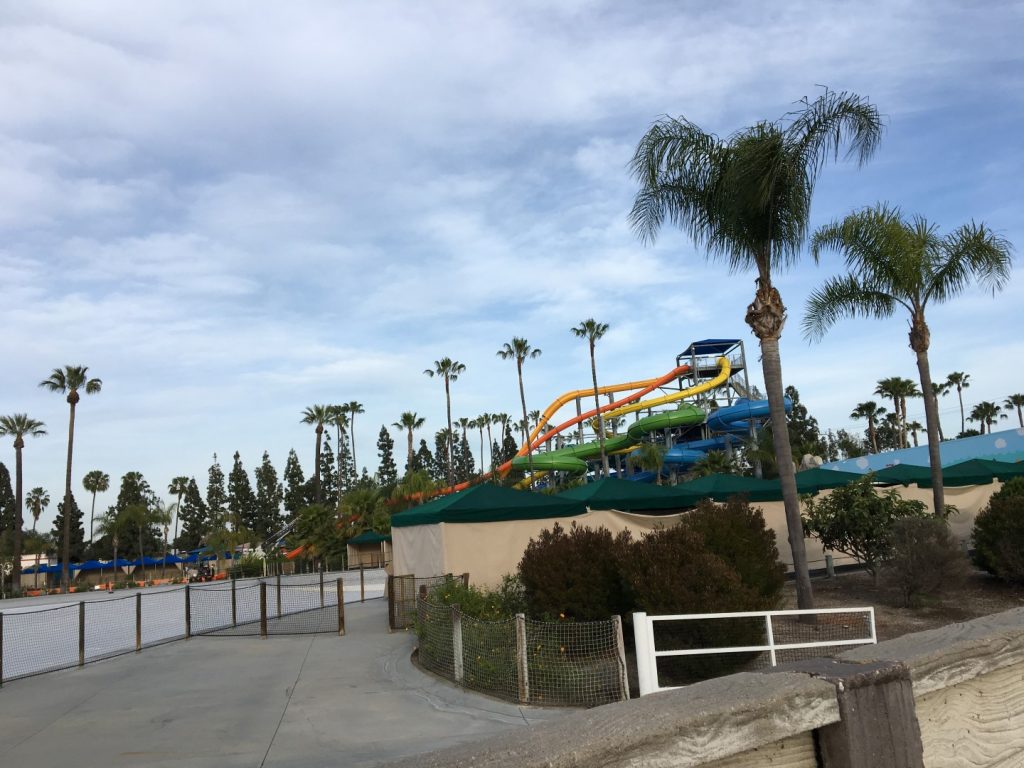 We’re excited to check out the new slides this summer! Soak City opens May 20th! In three weeks! For the full details of he 7 new slides coming to the park, click here! 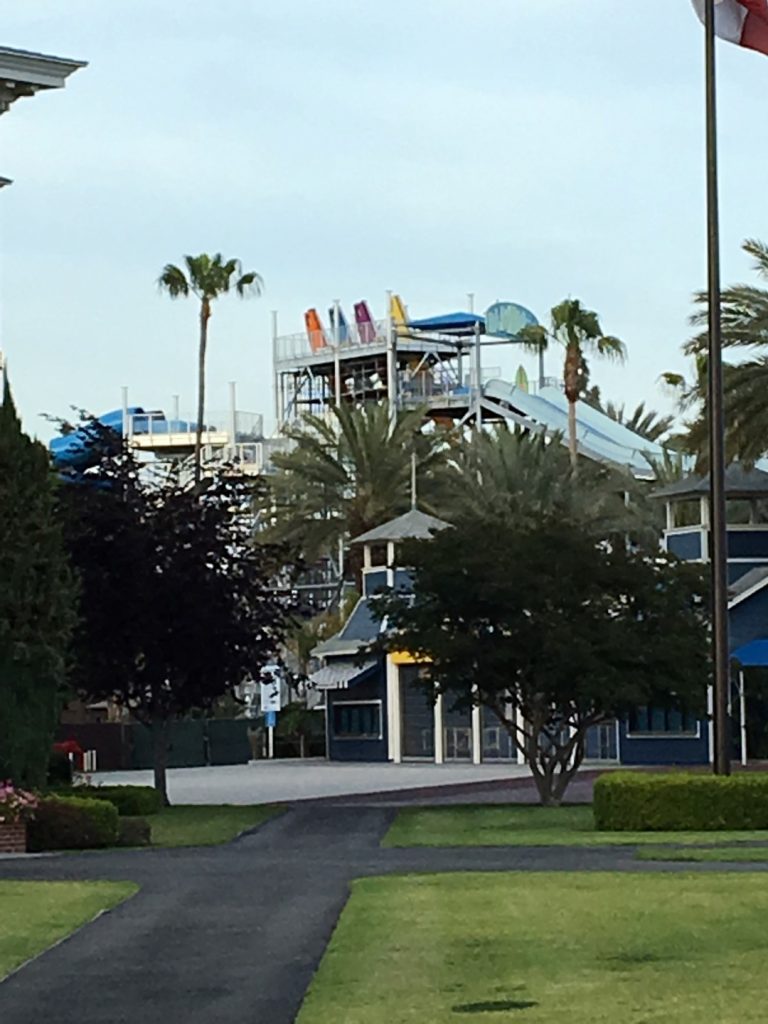 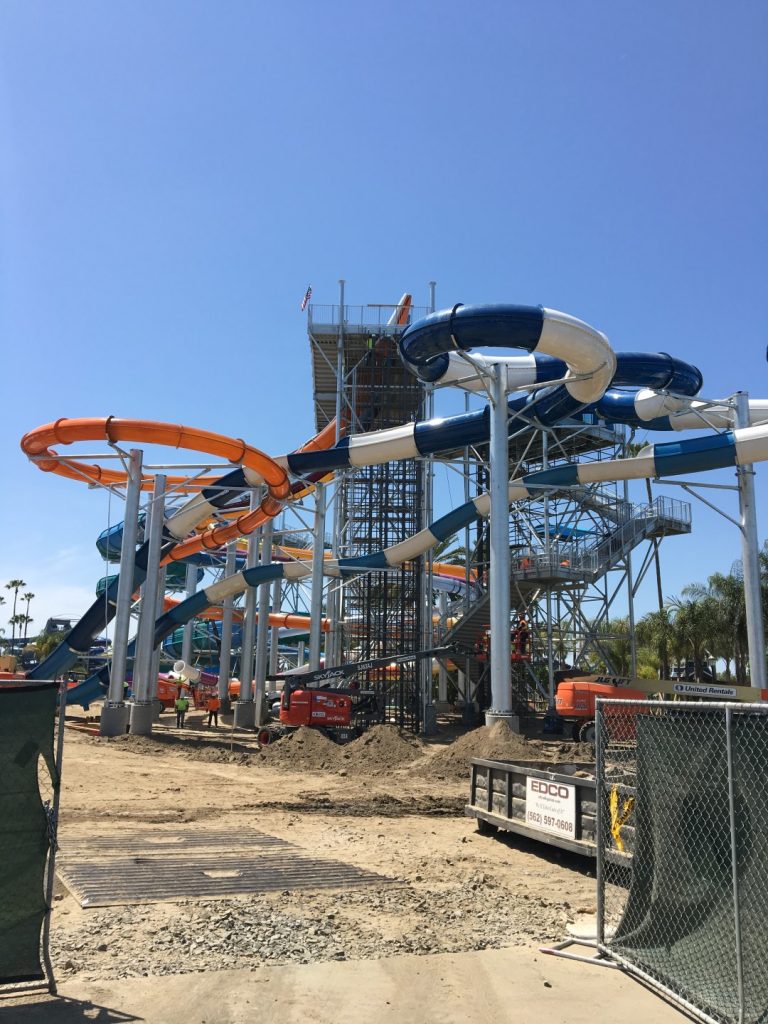 That’s all for this quick update! We’re continually impressed with Knott’s effort at maintaining this beautiful park, and improving it as well with summer ’17 right around the corner! Stay tuned for more Knott’s Berry Farm updates, soon! 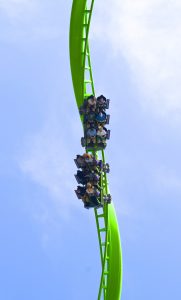 Thank you for checking out this Knott’s Update! Check out our Sol Spin review, as well as Cabin Crew Coaster King’s maiden voyage report: Bosque Mágico – ACE South of the Border.