Alexander: We’ve made it to the final (new) park of our China trip! While a bonus visit to Shanghai Disney took place on the last day of our tour, Guangzhou Sunac was the last call for credits and new rides on the trip.

Like its sister park in Wuxi, Guangzhou Sunac Land is a brand new park that’s still getting its sea legs. 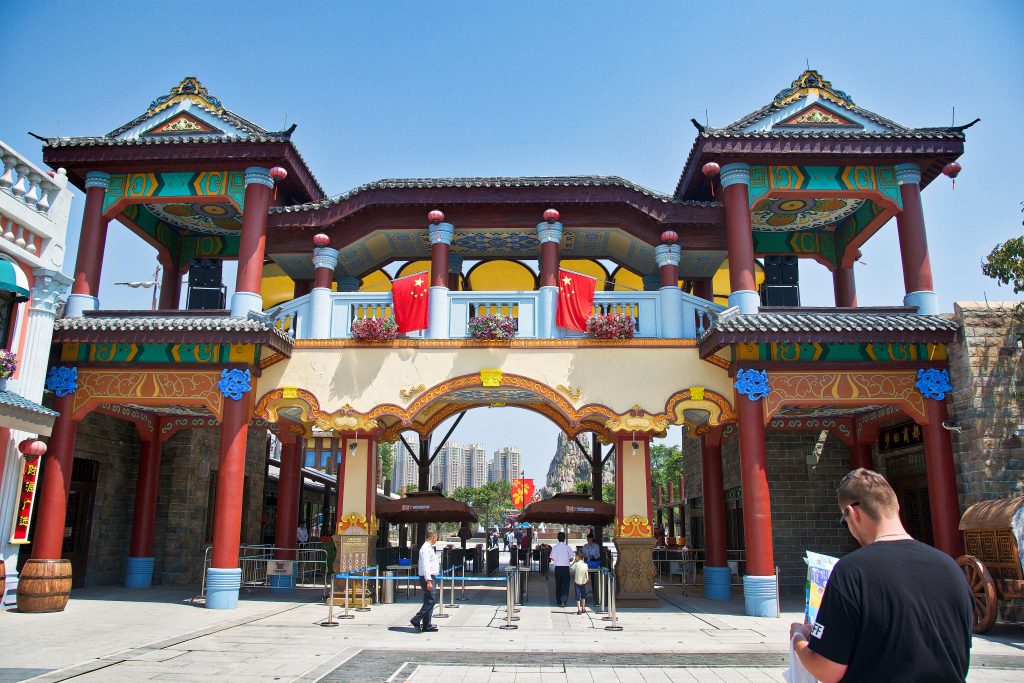 Shockingly, despite being a beautiful summer-y Saturday, Guangzhou Sunac was almost devoid of people. Even its location in the metro next to the enormous Guangzhou International Airport does seem to assist with filling the park. 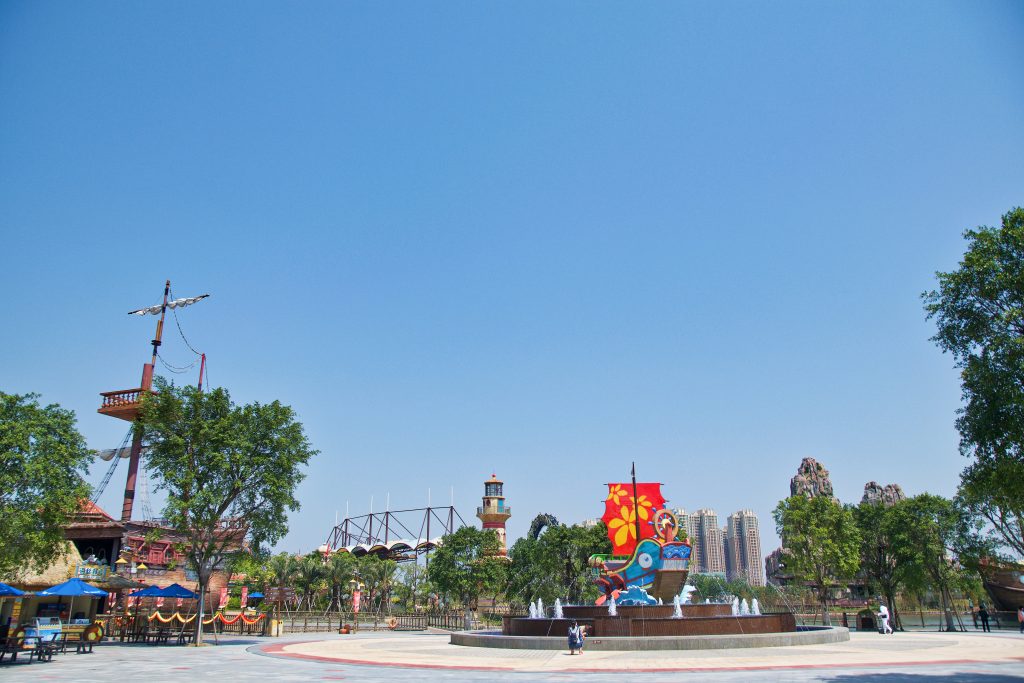 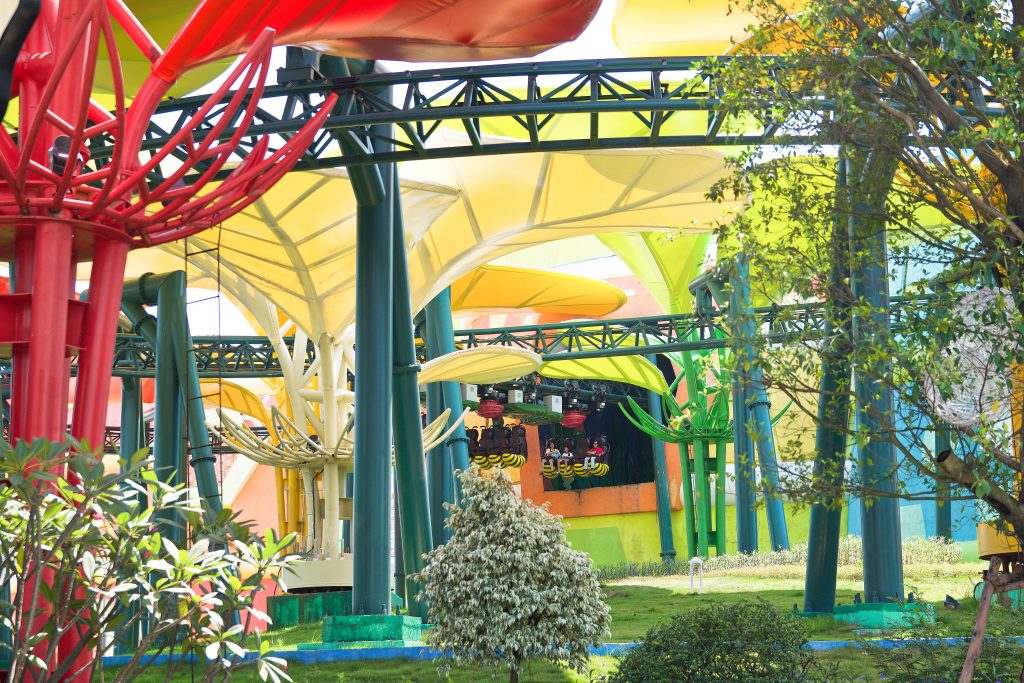 Though a little rough around the edges (especially with the indoor portion), Garden Fantasy is a fun and interesting ride – the “coaster” portion at the end is surprisingly fast. 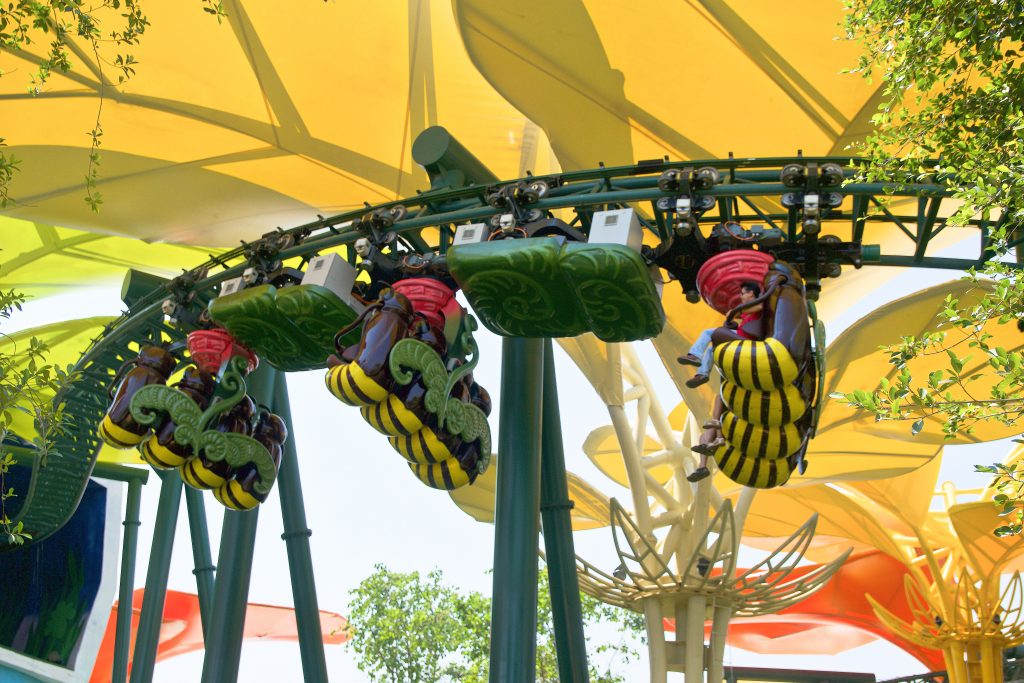 Of course, the main reason we came here was for Dueling Dragons, a spectacular composite Intamin inverted Blitz coaster attraction. 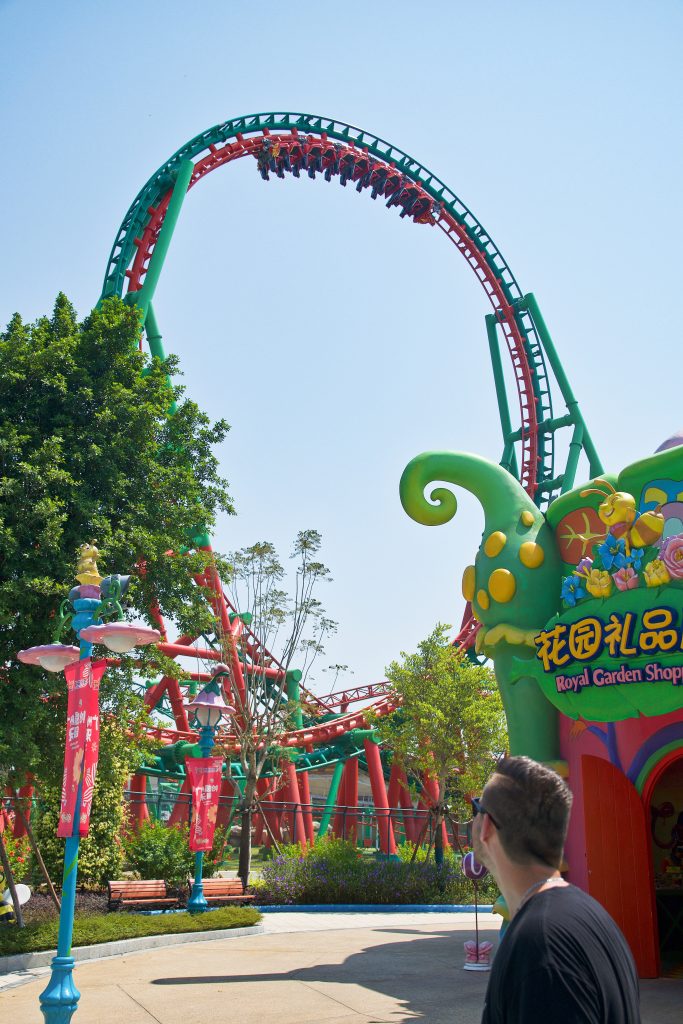 These would be the only coasters of the visit, since the indoor Havoc in Heaven hadn’t debuted yet. 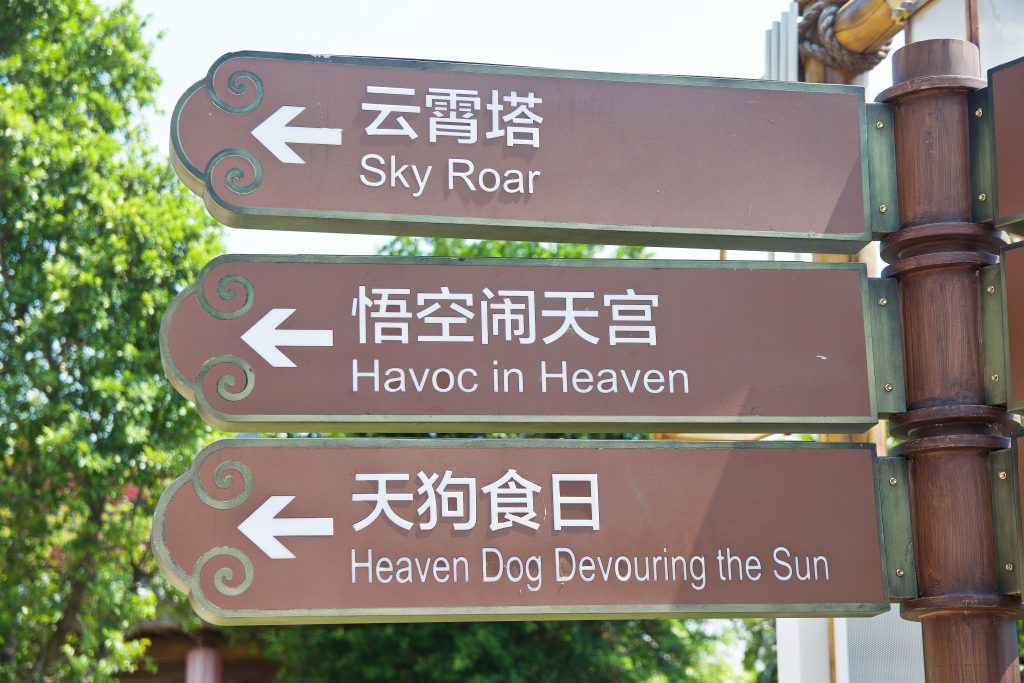 Those who know Guangzhou Sunac Land better than we do told us that our best bet at catching both sides of Dueling Dragons would be to visit on a Saturday – all other days, its definitely either one side or the other. 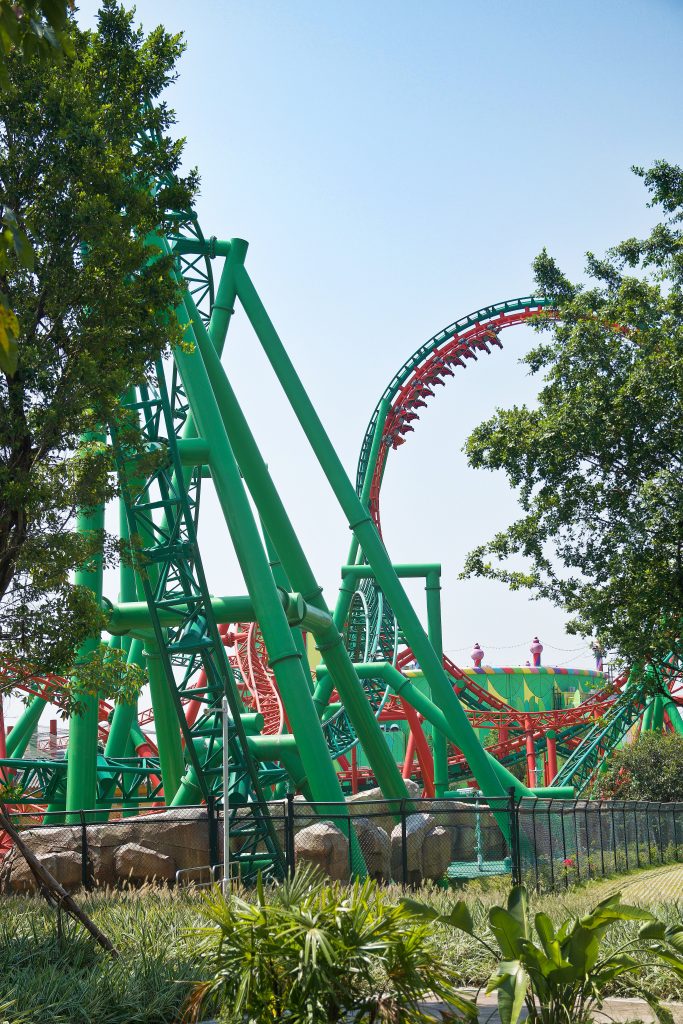 We’ll get back to Dragons in a bit – for now, let’s explore the rest of the park. The indoor area that partialy encloses Fantasy Garden looks decent, but closer inspection reveals quickly developing mold and crumbling drywall. 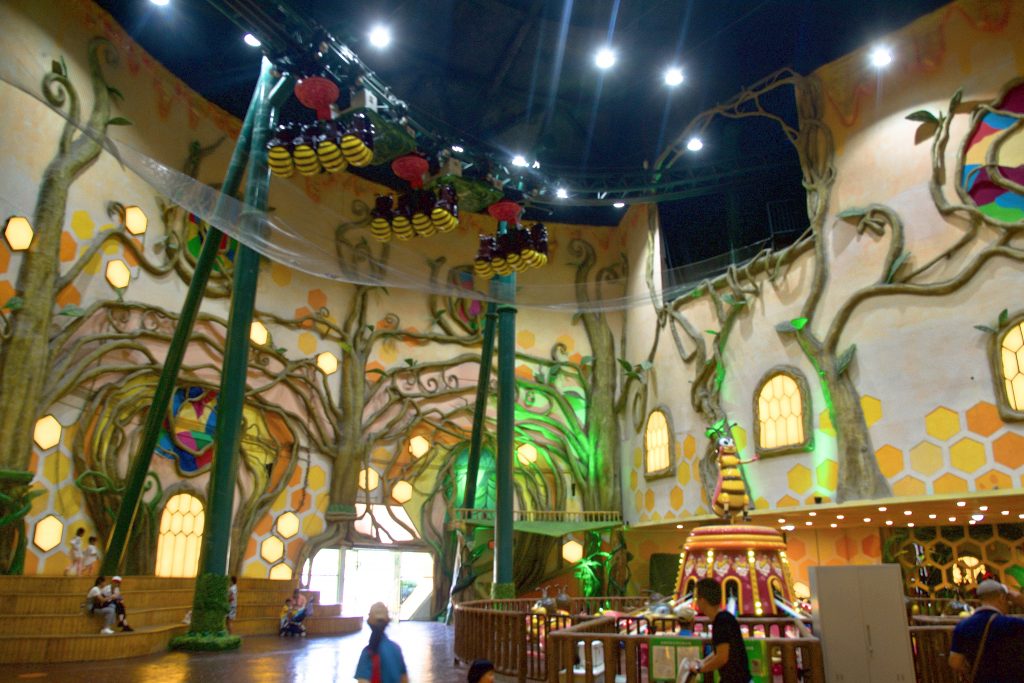 It’s really too bad that the Sunac parks were so rushed – there are some really amazing touches here, like this beautiful floral Ferris Wheel. 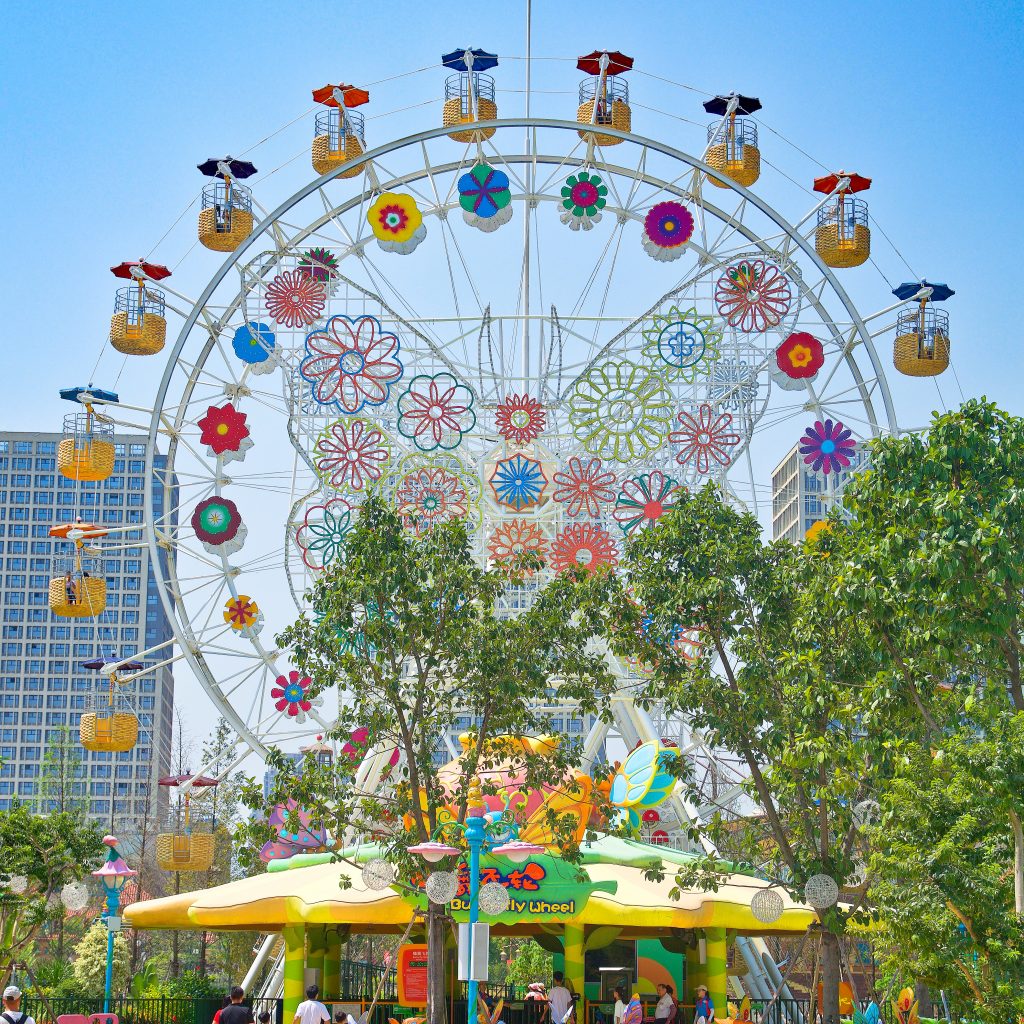 Like Wuxi Sunac, Guangzhou Sunac has a pirate area, a fantasy area, a historic Chinese area or two, and so on. Attraction rosters are surprisingly unique considering the parks do not have overlapping markets. 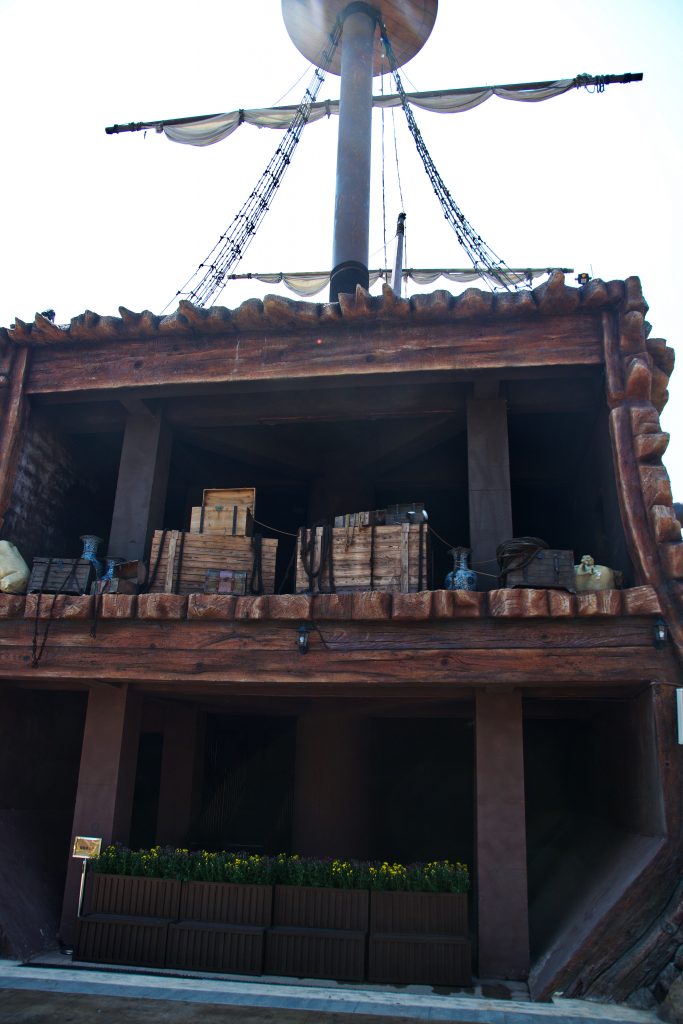 We found out after the fact that their Golden Horse Shoot-the-Chute is actually a knock-off of a Mack SuperSplash – yet another credit missed! Oh well. 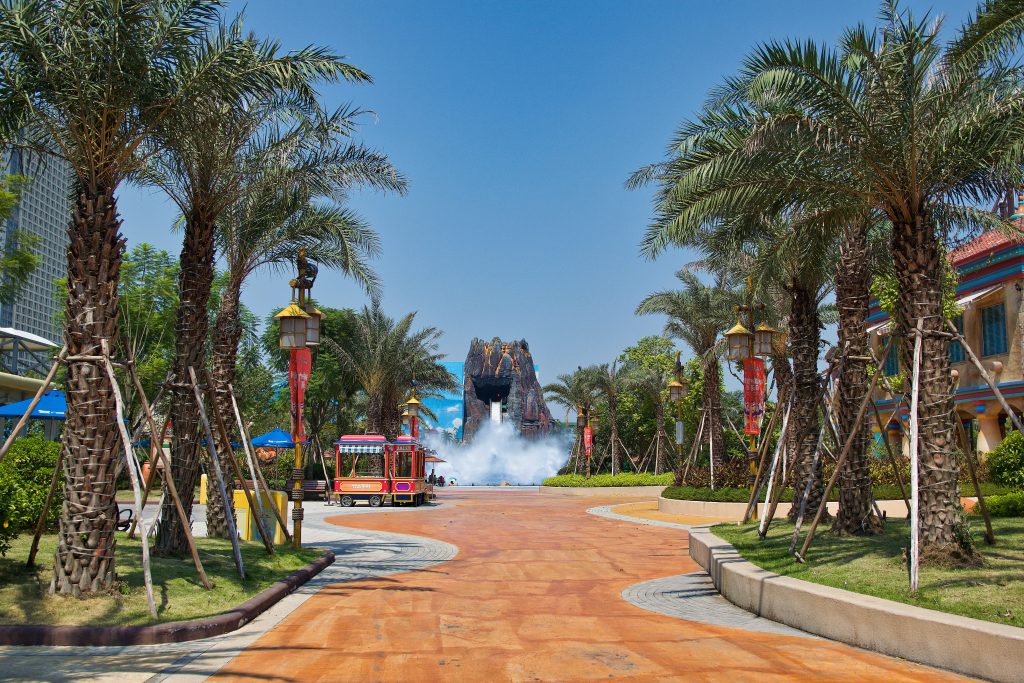 Aside from the operating side of Dueling Dragons, the standout ride at Guangzhou Sunac Land for us was Fly Guangdong, a superb flying theater. 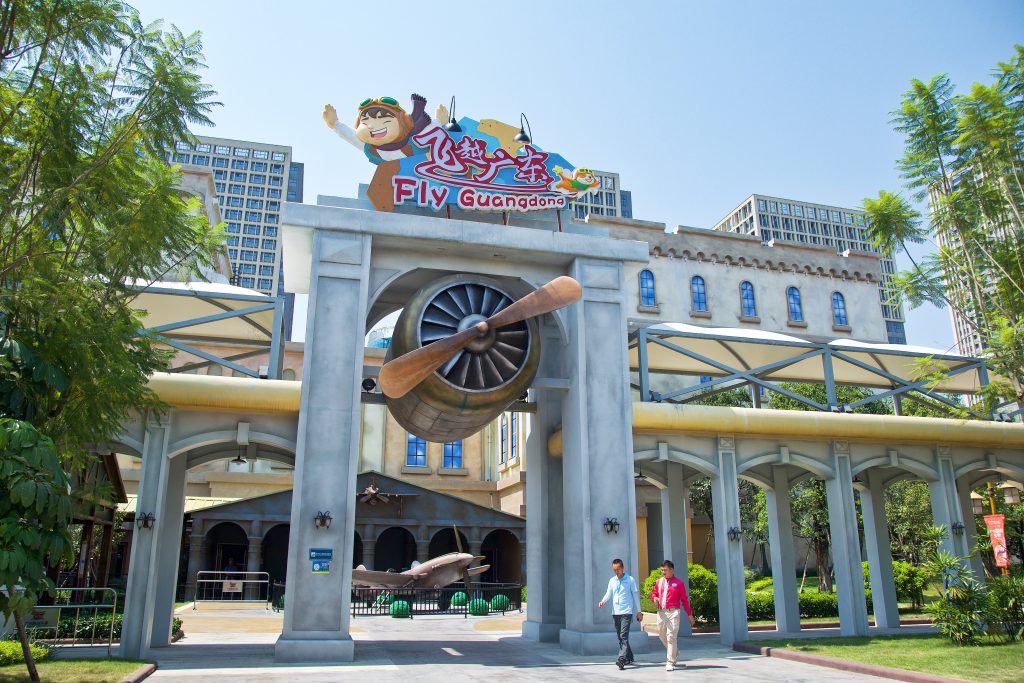 This is one of a few Sunac attractions on our trip that really hit the mark  – impressive scenery, a great story, and some captivating Chinese culture. 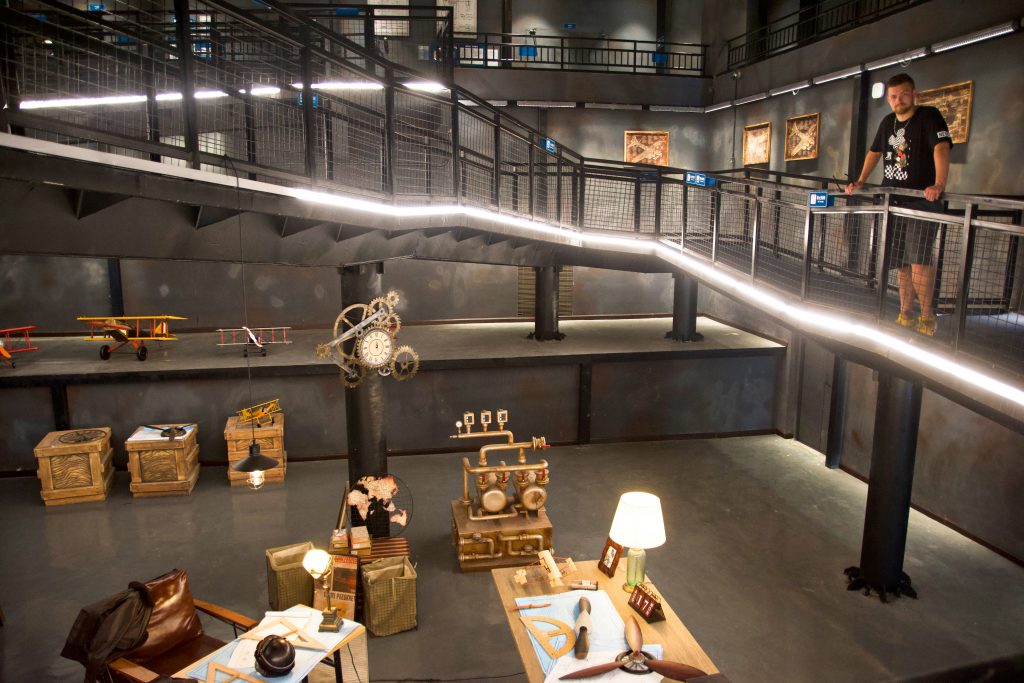 Like our beloved Soarin’ Over California, Fly Guangdong focuses on the spectacular natural beauty of the actual region in which riders find themselves; in this case, the Guangdong Province of Souther China, which hosts the Guangzhou megaopolis. 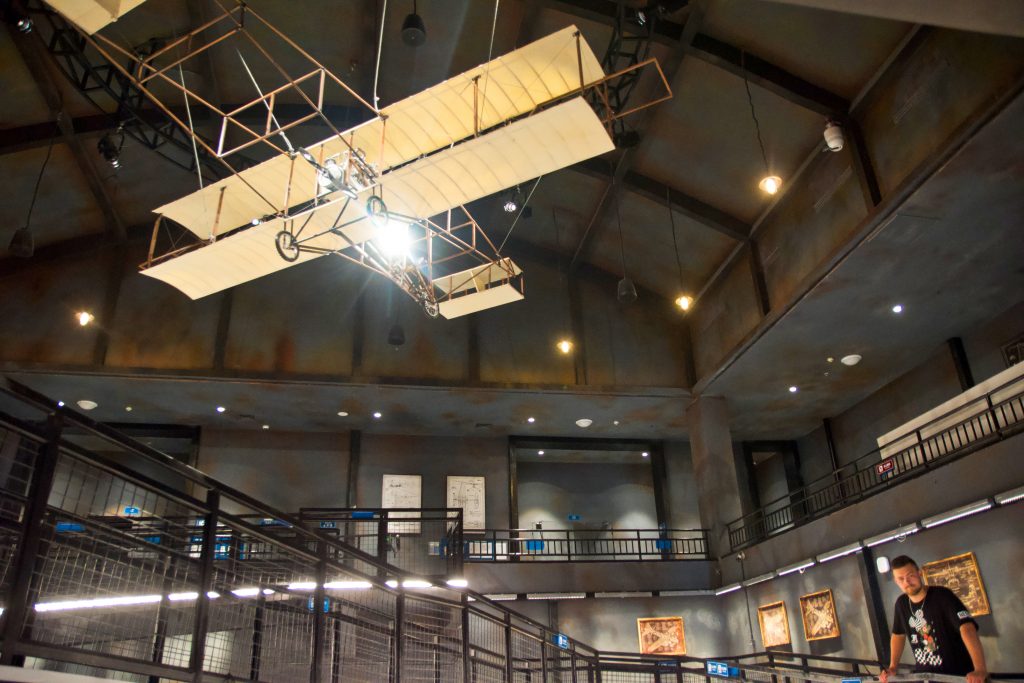 Unlike Soarin’s “take off” sequence, Fly Guangdong loads passengers on an elevated platform that then folds down like a trap door. 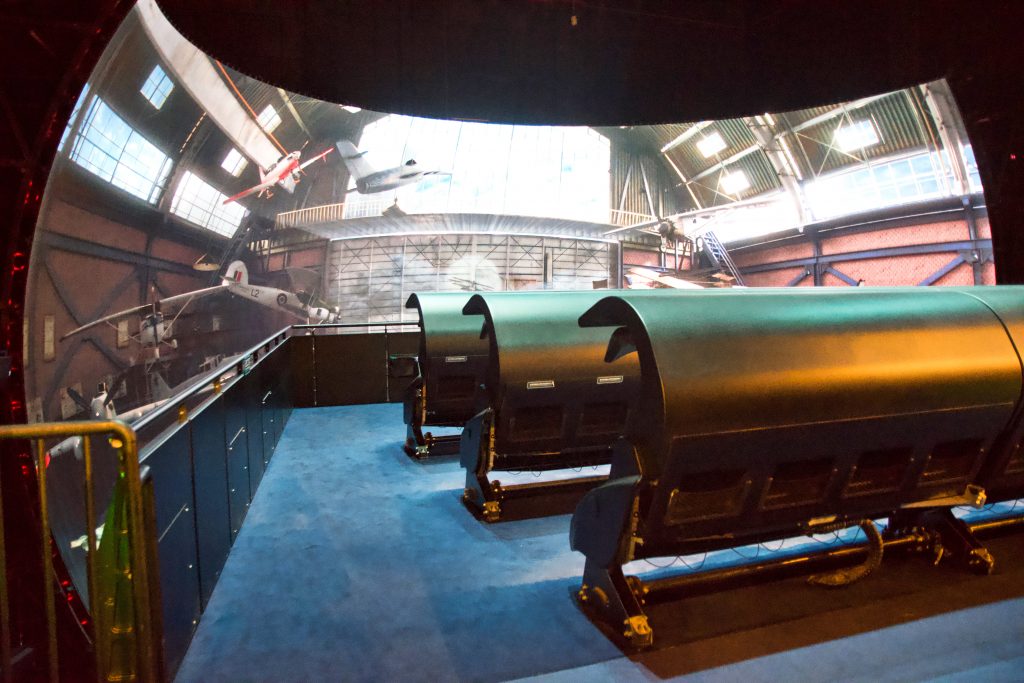 We did a lap around the park just to see what all there was. We came across a rock formation similar to that of Wuxi Sunac (complete with ropes course), but it seemed empty without a B&M Wing flying through it. 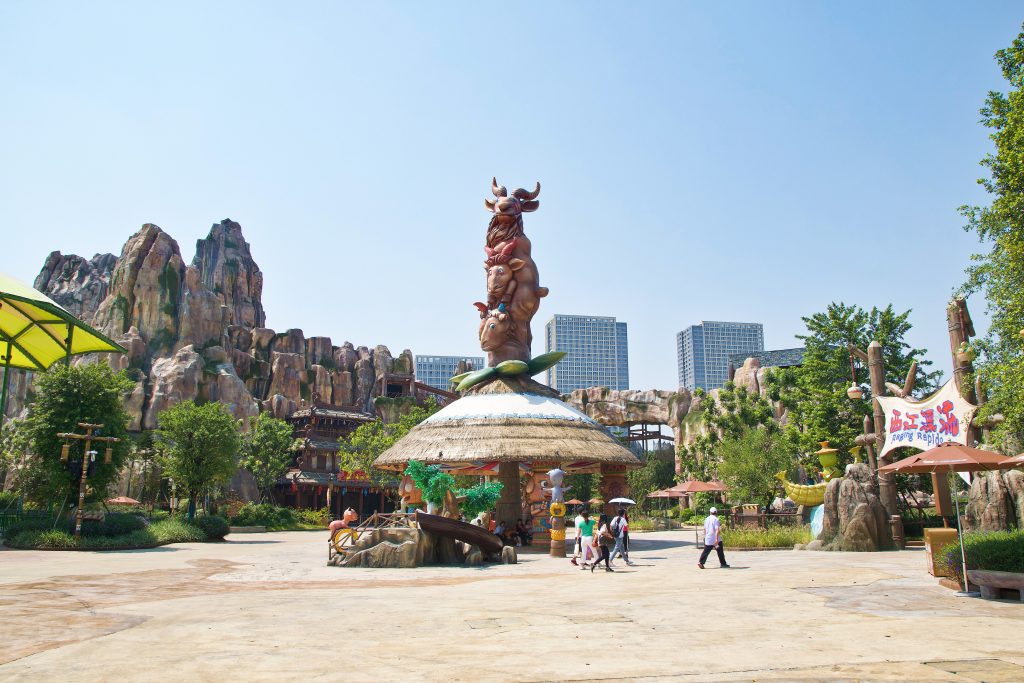 Here we have a grand total of 6 passengers aboard the frisbee ride. 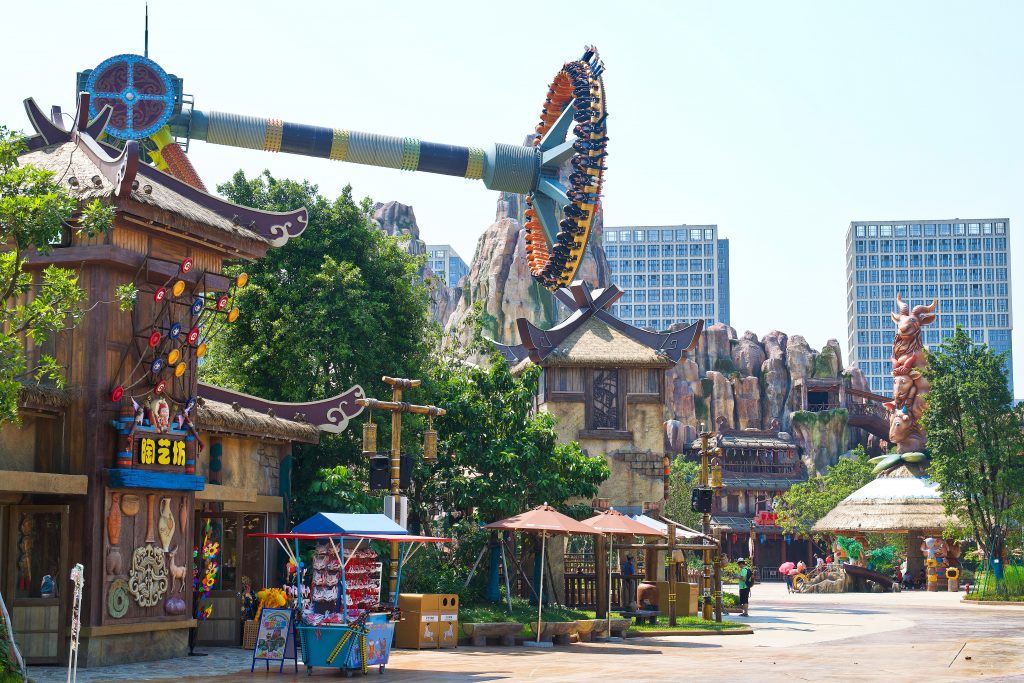 Guangzhou Sunac’s water ride collection is completely unique from Wuxi Sunac’s – however, there weren’t many people around to enjoy them. 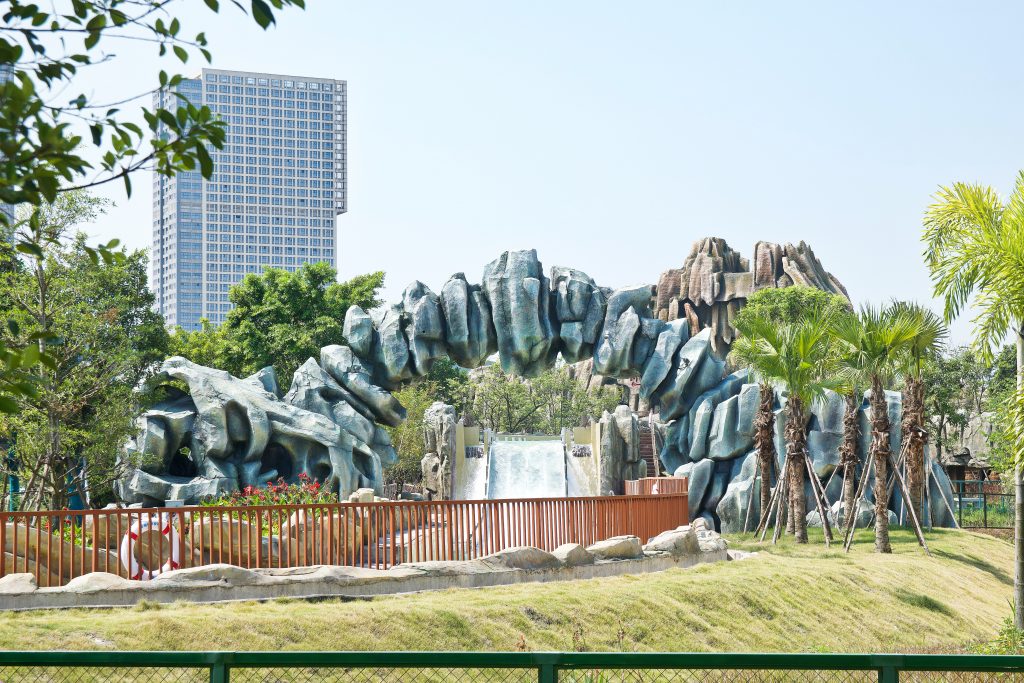 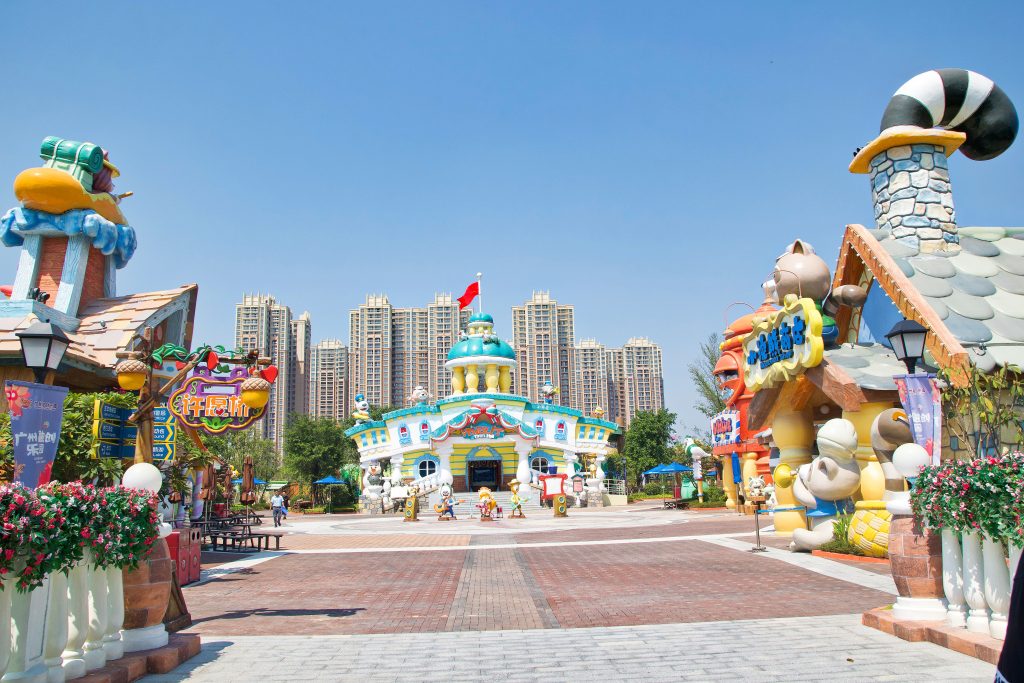 Here we have Havoc in Heaven, a purported Intamin indoor coaster similar to Wuxi Sunac’s Zamperla Factory Coaster. While the latter did eventually open, Havoc appears to have regressed, with its entry on RCDB now taken down. 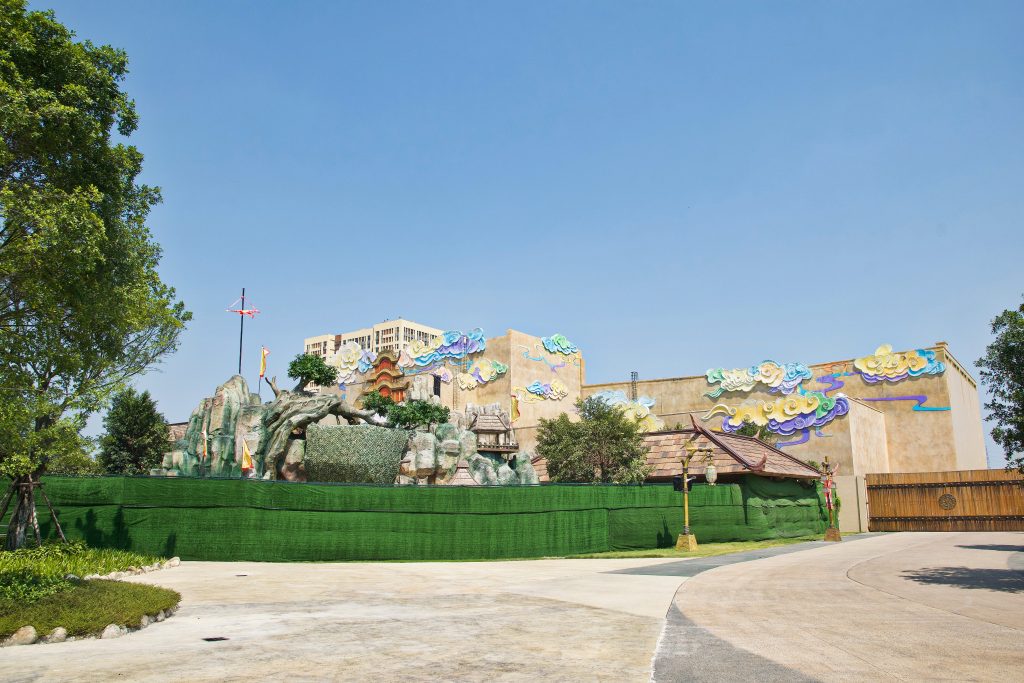 We’d hoped that Heaven Dog Devouring the Sun was a dark ride; alas, it was just a show. They actually had a good 30-40 people watching though, which was a surprise. 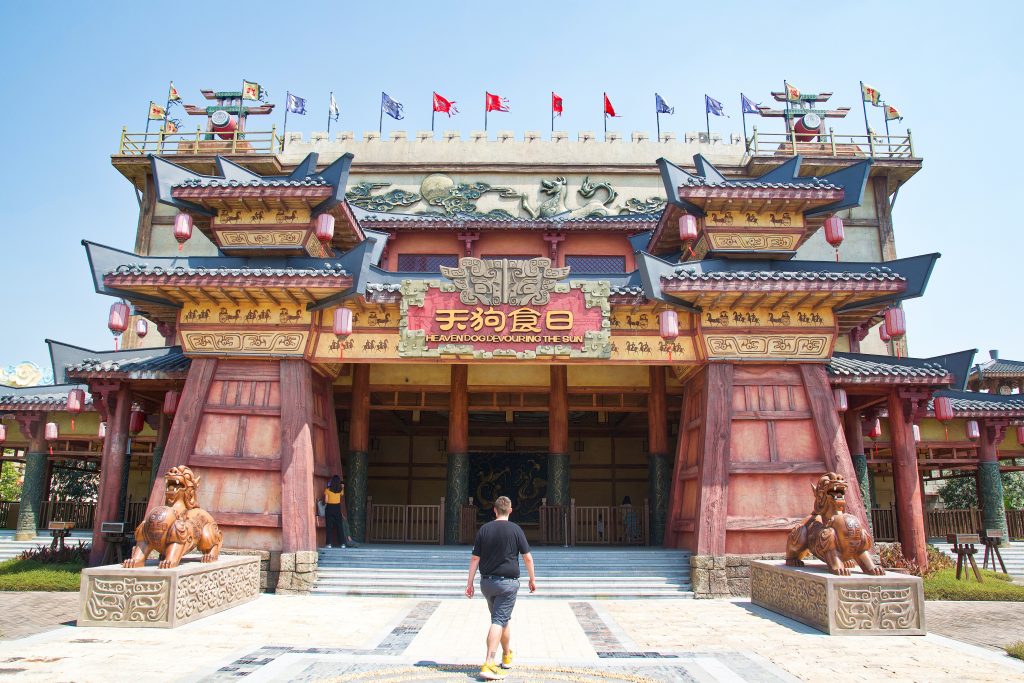 With the whole park now covered, we returned for a few more rides on the sit-down side of Dueling Dragons. 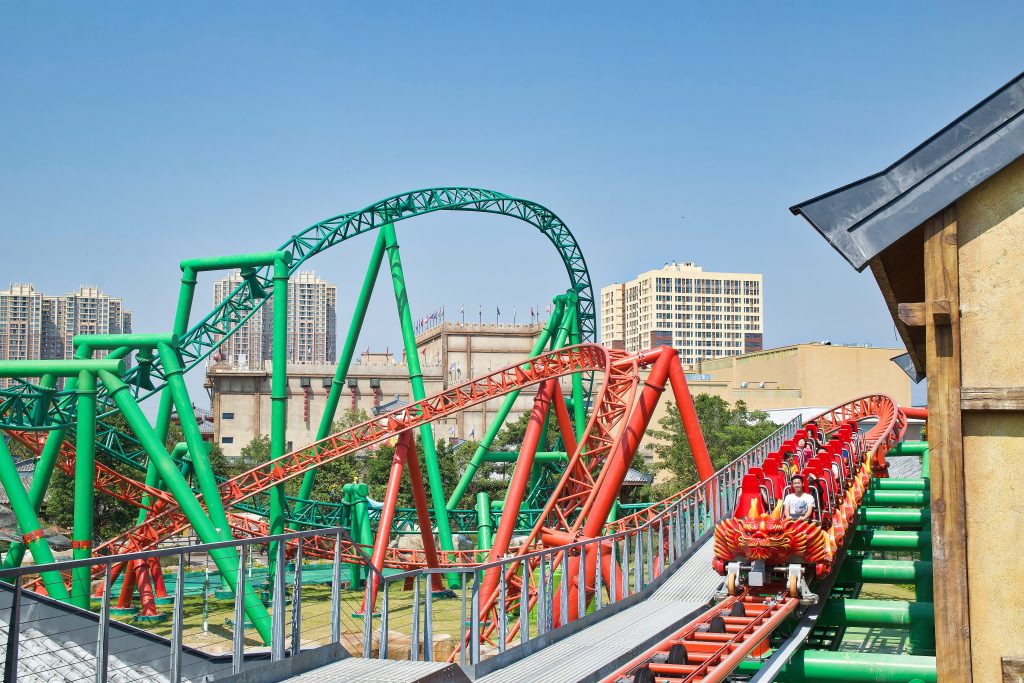 As you can see, Guangzhou Sunac Land is struggling with attendance. While I’m sure that visiting on a Saturday was our best bet at getting both credits, it would appear that running both sides at once is cost-prohibitive as of now. 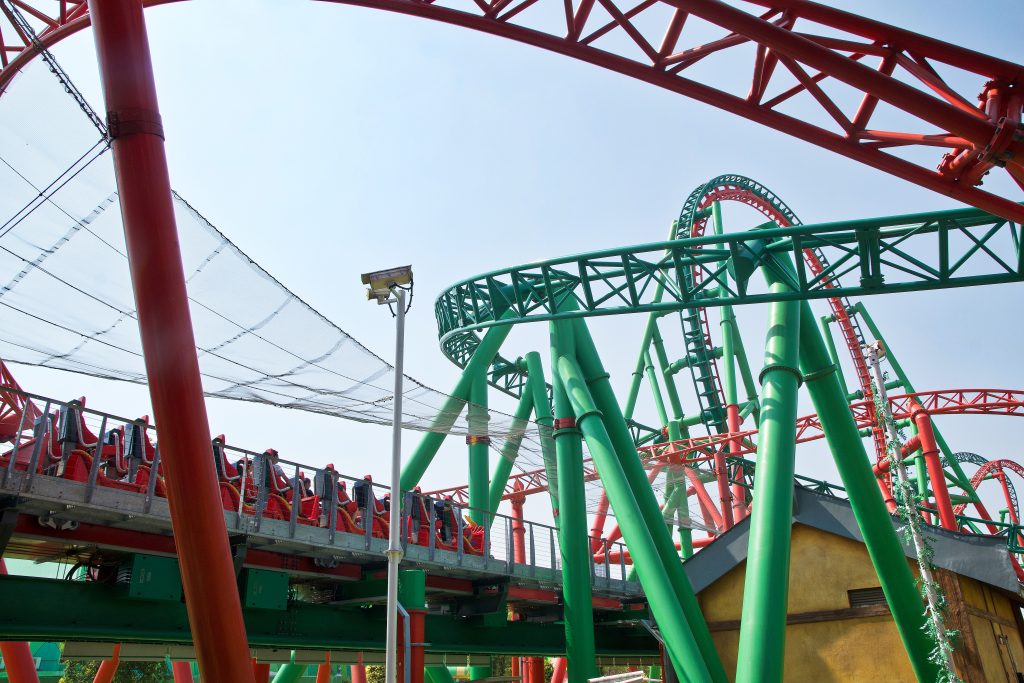 As disappointed as we were to miss out on the invert, we can’t hardly blame the park for not running both sides of the coaster. After all, we waited close to 10 minutes at one point just to get enough people on the sitdown side for a dispatch. 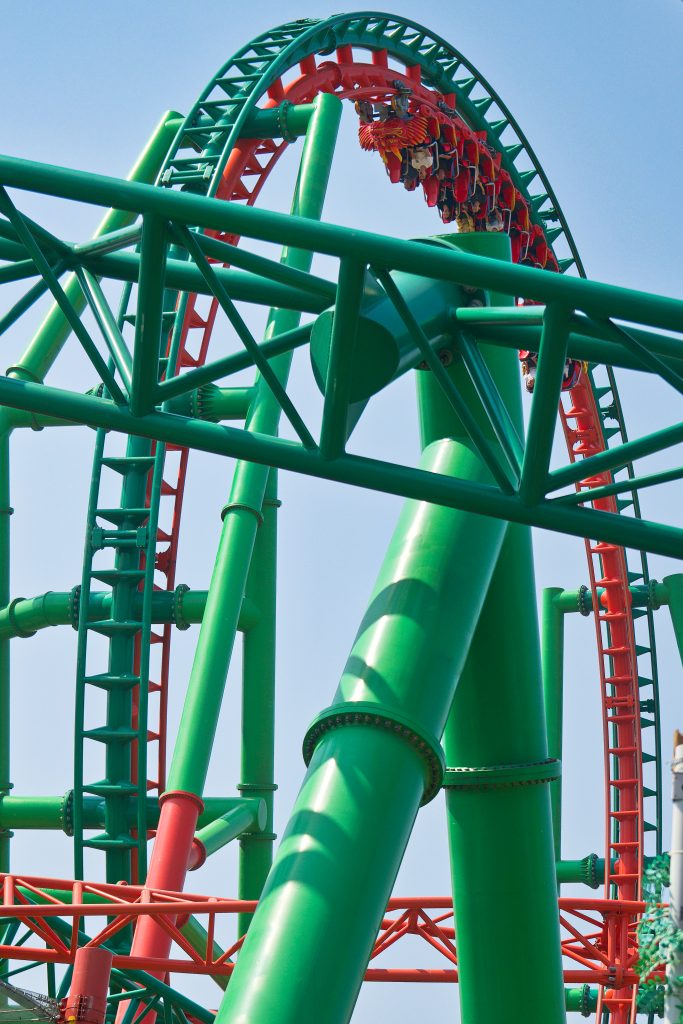 I would like to point out that the side of Dueling Dragons that we did ride is excellent – a thrilling and dynamic Intamin Blitz in its own right. 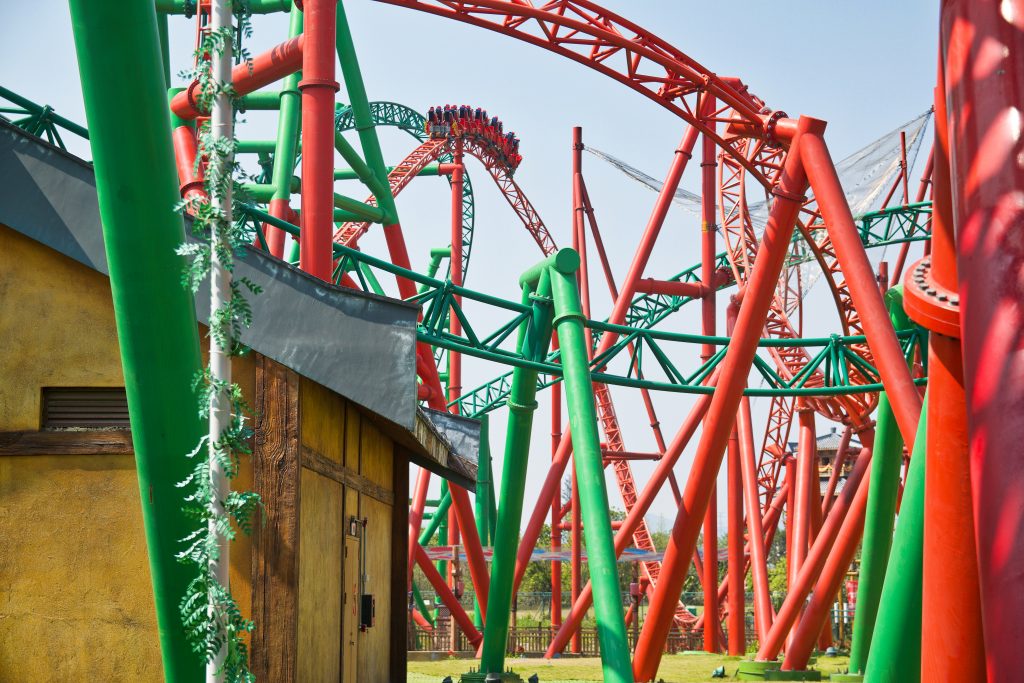 There are moments of these rides where dueling is the key element – however, even on days where both coasters ran, the park purportedly couldn’t be bothered to duel them. 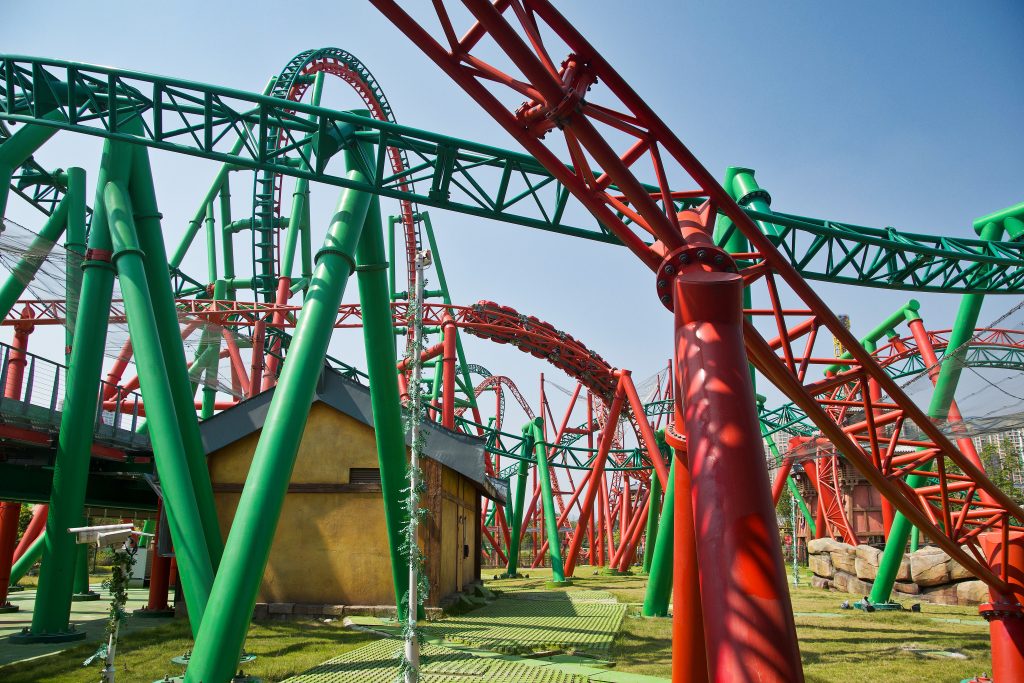 In fact, with the exception of the ride’s early June media shoot with Intamin, we’re not certain that the rides have ever actually dueled for the general public, let alone operate simoultaneously. 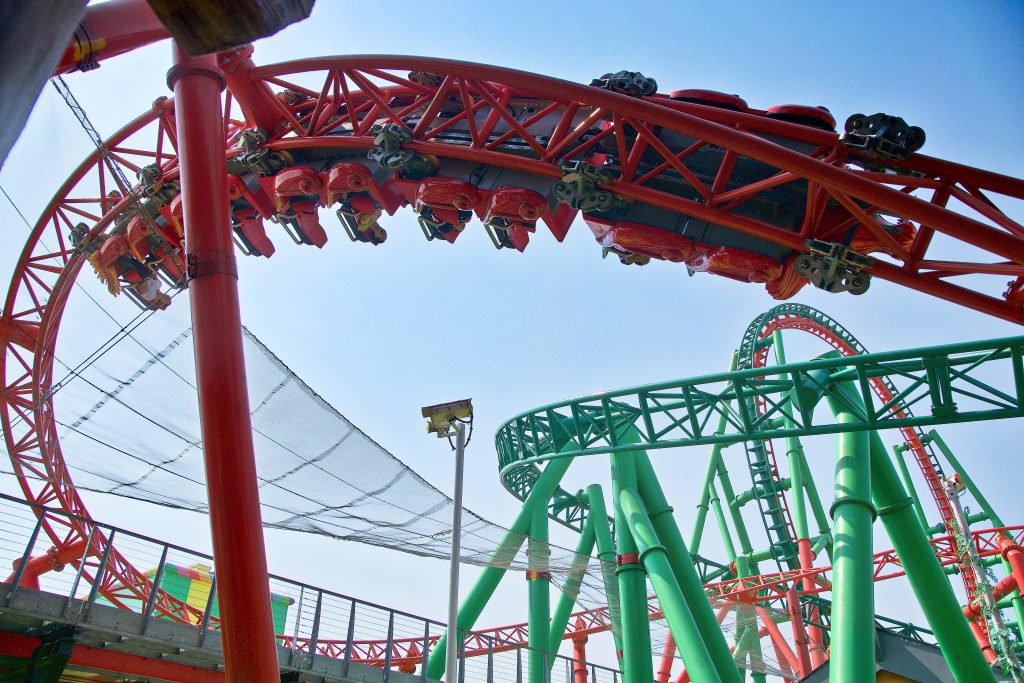 A personal miss for us to be sure – but really we just feel for the park. Guangzhou Sunac Land has a ton of potential and could be something really special if they can sell a clone to a park that’s more operationally stable. 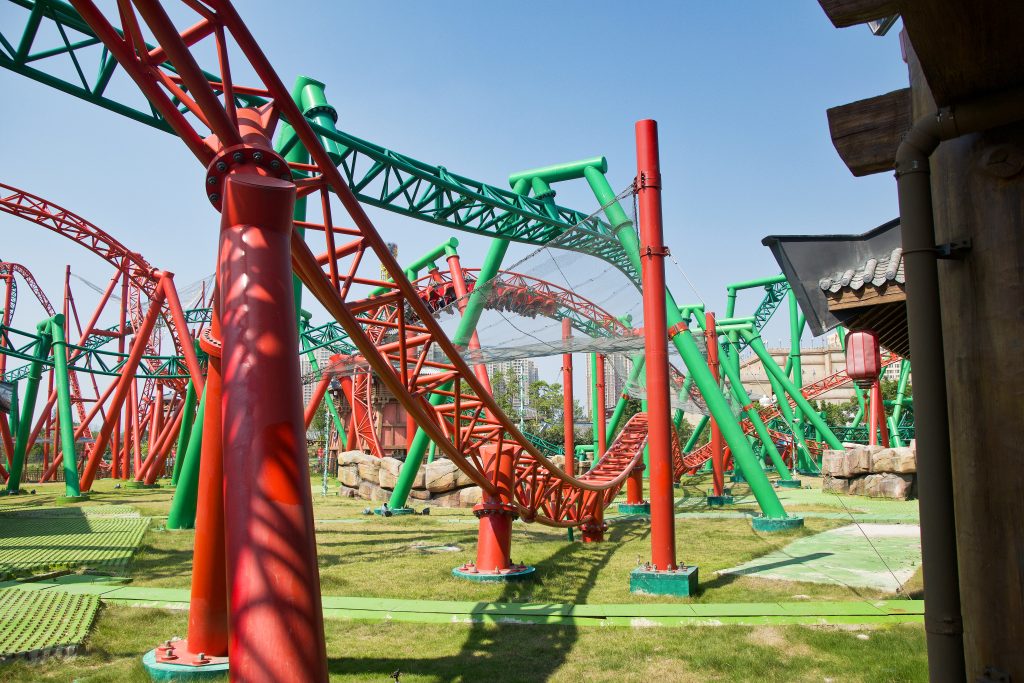 Just look at these beautiful trains! The World deserves a launched-shuttle-looping-dueling-terrain Intmain invert with lapbar trains! 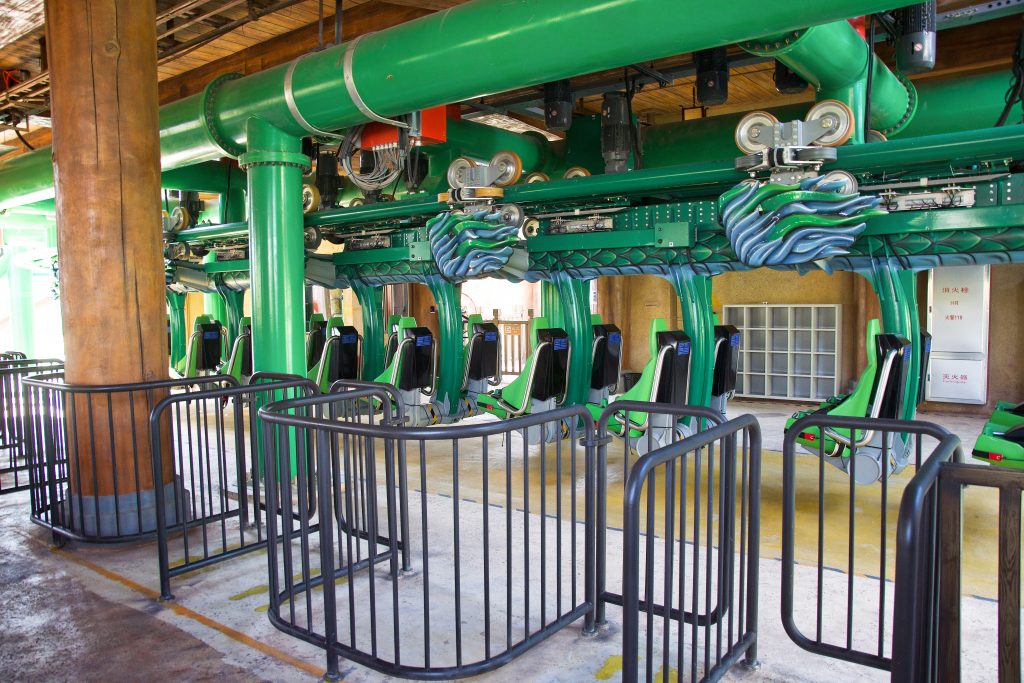 And so ends our Guangzhou Sunac Visit, and our China trip coverage. Thank you to everyone who explored these parks with us by checking out our reports, podcasts, and social media updates! 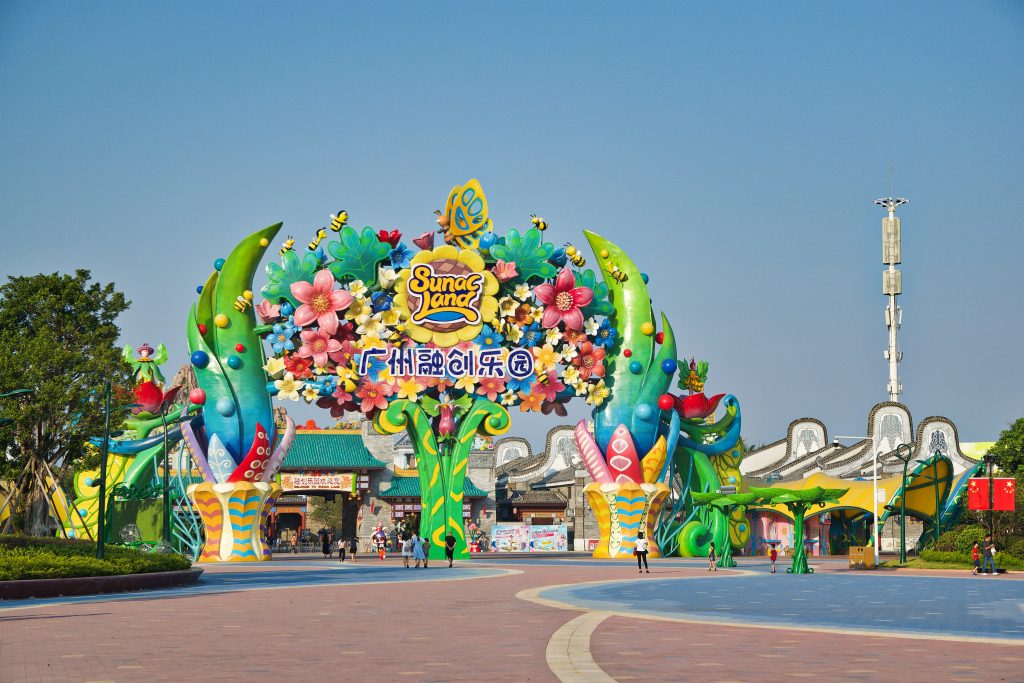 China’s got so much more to offer! Check out these recent China reports and podcasts: