Sven: While we can’t really travel much to theme parks at the moment, why not start planning to do so? At some point, all of this will have to be over so why not be prepared and start dreaming about our theme park trips? That’s why we’ll help you with our new article series: European Coaster City Trips! First up: Brussels in Belgium!

In these article series we’ll discuss 4 things about the country and its coasters:

For this first one, I have to become a tourist in my own country. Belgium might be small, but it has a lot of history to offer. Next to that, we’re famous for our food and drinks: delicious chocolate, yummy waffles, hundreds of different beers and yes, Belgian fries. So that already is enough to visit us!

Theme park wise, Belgium might not be the most sexy coaster country compared to other European countries. However, that’s about to change next year with two major coasters coming! An Xtreme Spinning Coaster by Mack for Plopsaland and the Intamin Mega Coaster for Walibi Belgium. But even now, there’s several reasons to consider the country. Let’s have a look!

Brussels lays in the heart of Belgium. That means from there, you can easily depart to the four main theme parks of Belgium:

You can easily label Walibi Belgium as the most thrilling park of Belgium. However it also offers lots of fun for families. Coaster enthusiasts will certainly enjoy Loup-Garou, one of the two remaining Vekoma woodies. Next to that there’s Pulsar, Europe’s only PowerSplash. Also nice in the coaster line-up is the classic and completely covered Psyké Underground, a Schwarzkopf Shuttle coaster. Dark ride fans will enjoy both Challenge of Tutankhamon, a Sally Corporation Shooter and Popcorn Revenge,  the world’s first Erratic Dark Ride by Alterface. Last but not least, water park lovers will enjoy Aqualibi to switch from rides to slides. 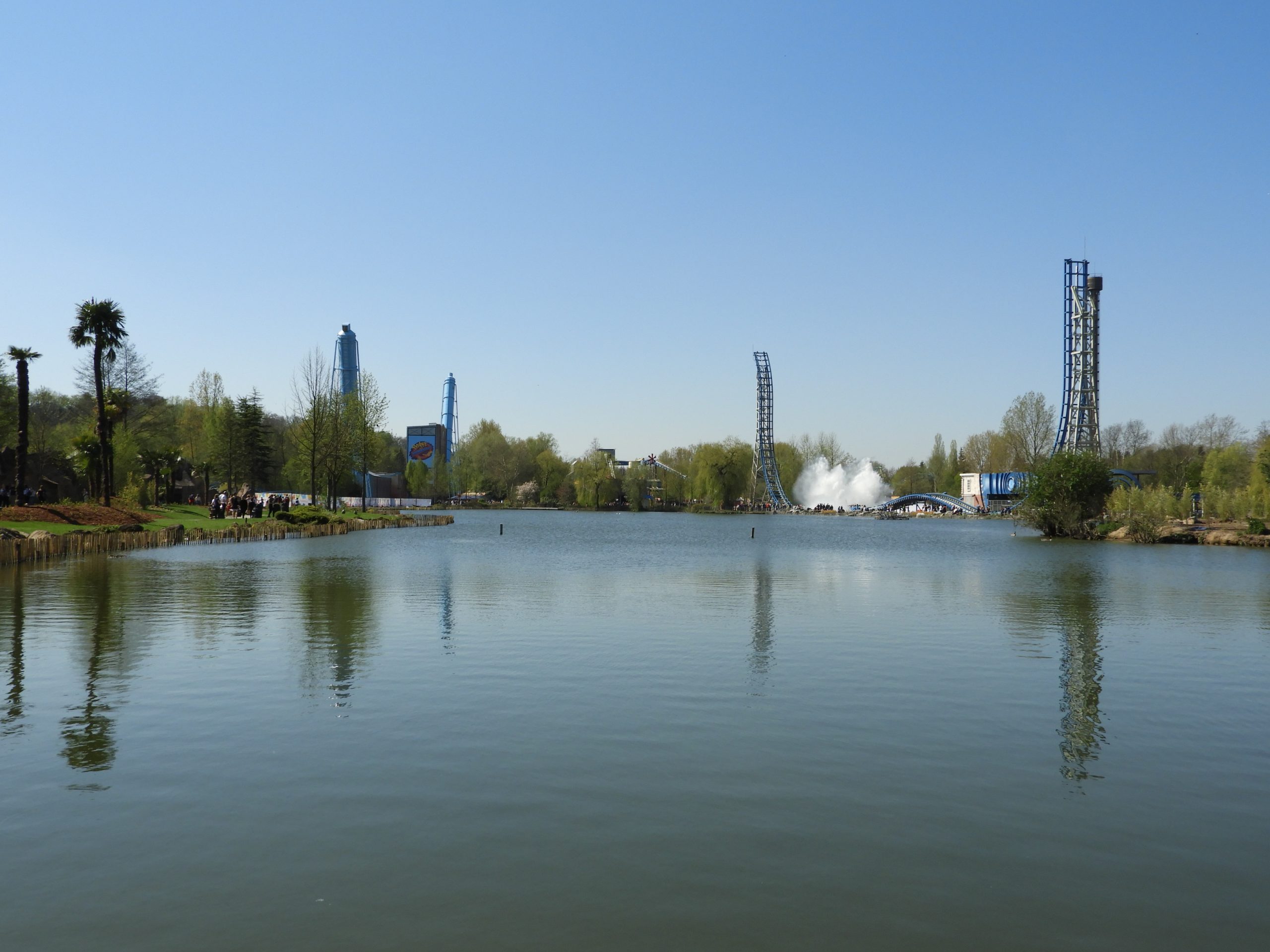 Bobbejaanland has a lot of history and that can still be seen in several areas of the park. In 2019, it opened the wonderful Gerstlauer Infinity coaster Fury, which gave the park a well deserved must-ride coaster. Next to that, it has one of the first EuroFighter coasters Typhoon, an iconic ride for the park and Belgium. But the most unique coaster that the park has to offer is the world’s only remaining Vekoma Illusion coaster: Revolution. Other remarkable rides include the classic dark ride El Paso Special and an interesting fun indoor log flume Indiana River. 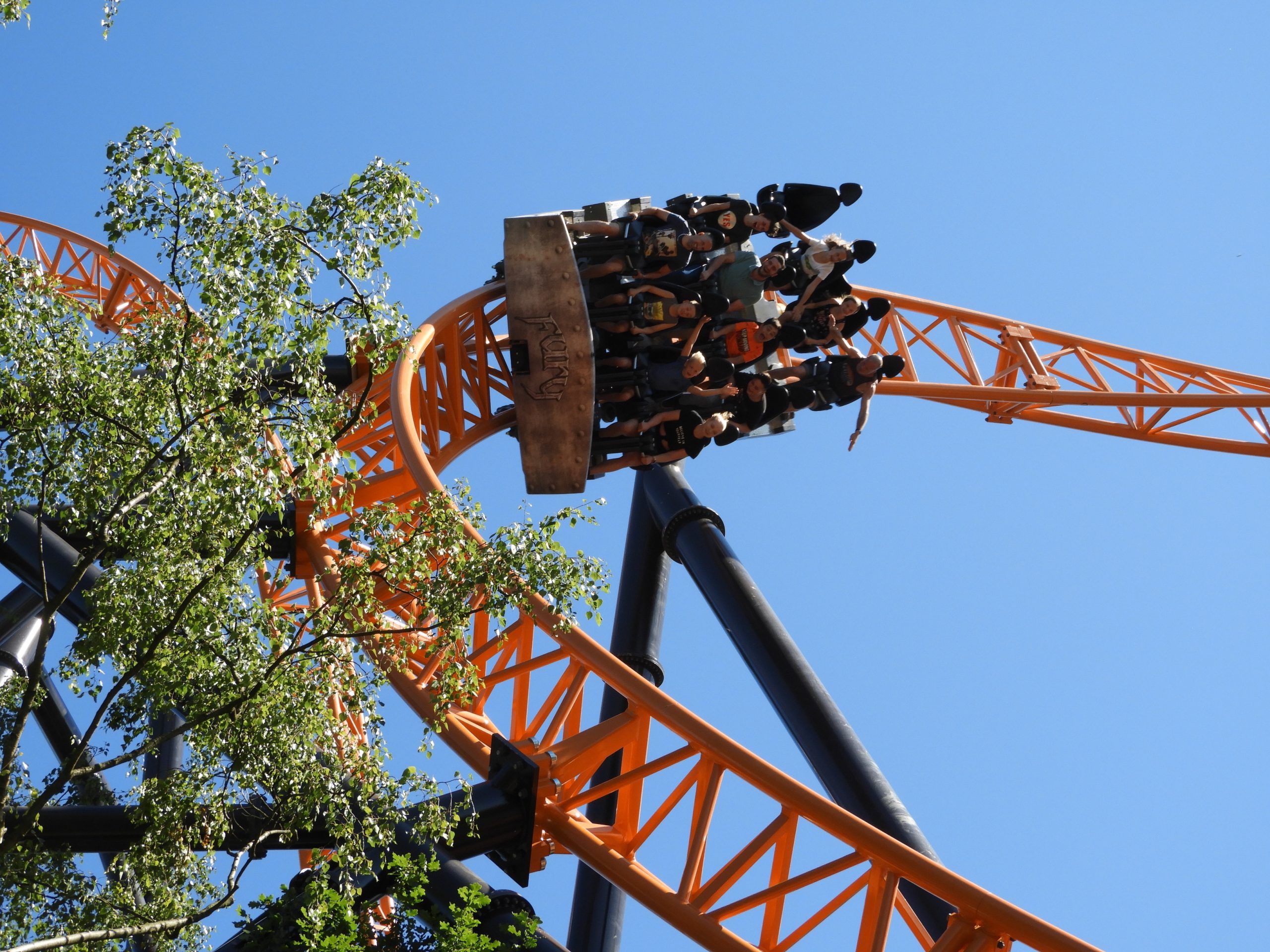 Bellewaerde Park can be seen as a combination of zoo and theme park. Next to that, it’s the most green park of the four. It mostly has Family coasters and rides, but for thrill seekers there’s Europe’s first Vekoma Boomerang. Another unique ride is the Dueling Alpine coaster Dawson Duel which doesn’t use the terrain topography as Alpine coasters usually do. In 2020, their newest coaster got added: Wakala, a Gerstlauer Family coaster with a Vertical Rollback. Other special rides include El Volador, the first Topple Tower and Bengal Express, a train ride through both a lion and tiger reserve. Since 2019, the park also has a water park: Bellewaerde Aquapark. 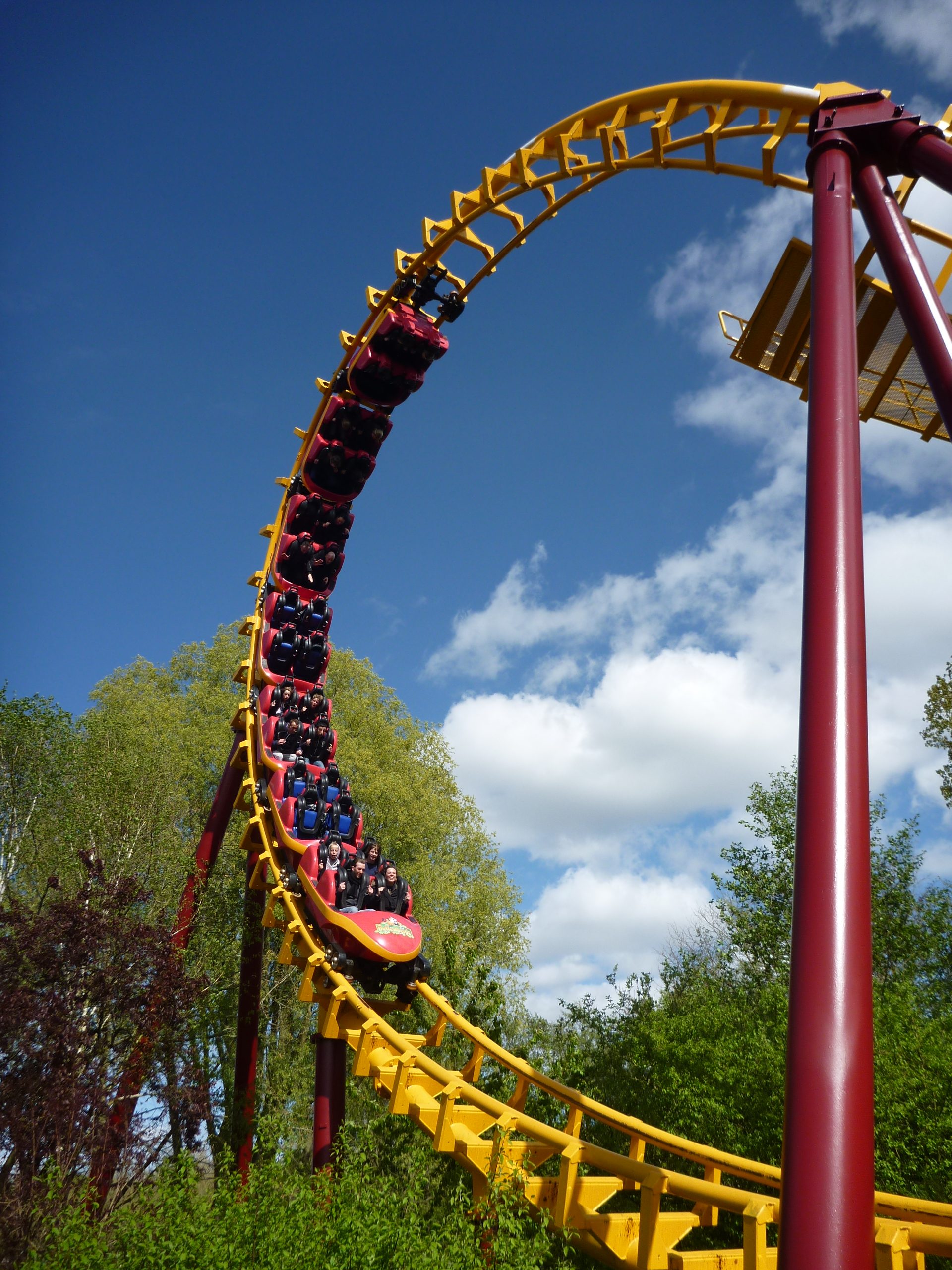 In the furthest northwest corner of the country, the final park of the four is one of the most visited parks in the country. Plopsaland De Panne counts as the main park of the Plopsa Group and has well known IP to support its parks. The two main coasters at the moment are Anubis, a Gerstlauer launch coaster, a true can’t-miss, and the wooden GCI Heidi The Ride. Some riders will also count SuperSplash as an extra credit due to its coaster track. But unlike the other SuperSplash installments, this one has an elevator to take the boats to their highest point. They also have a true classic dark ride: Bos van Plop and a highly themed water park Plopsaqua to end your day. 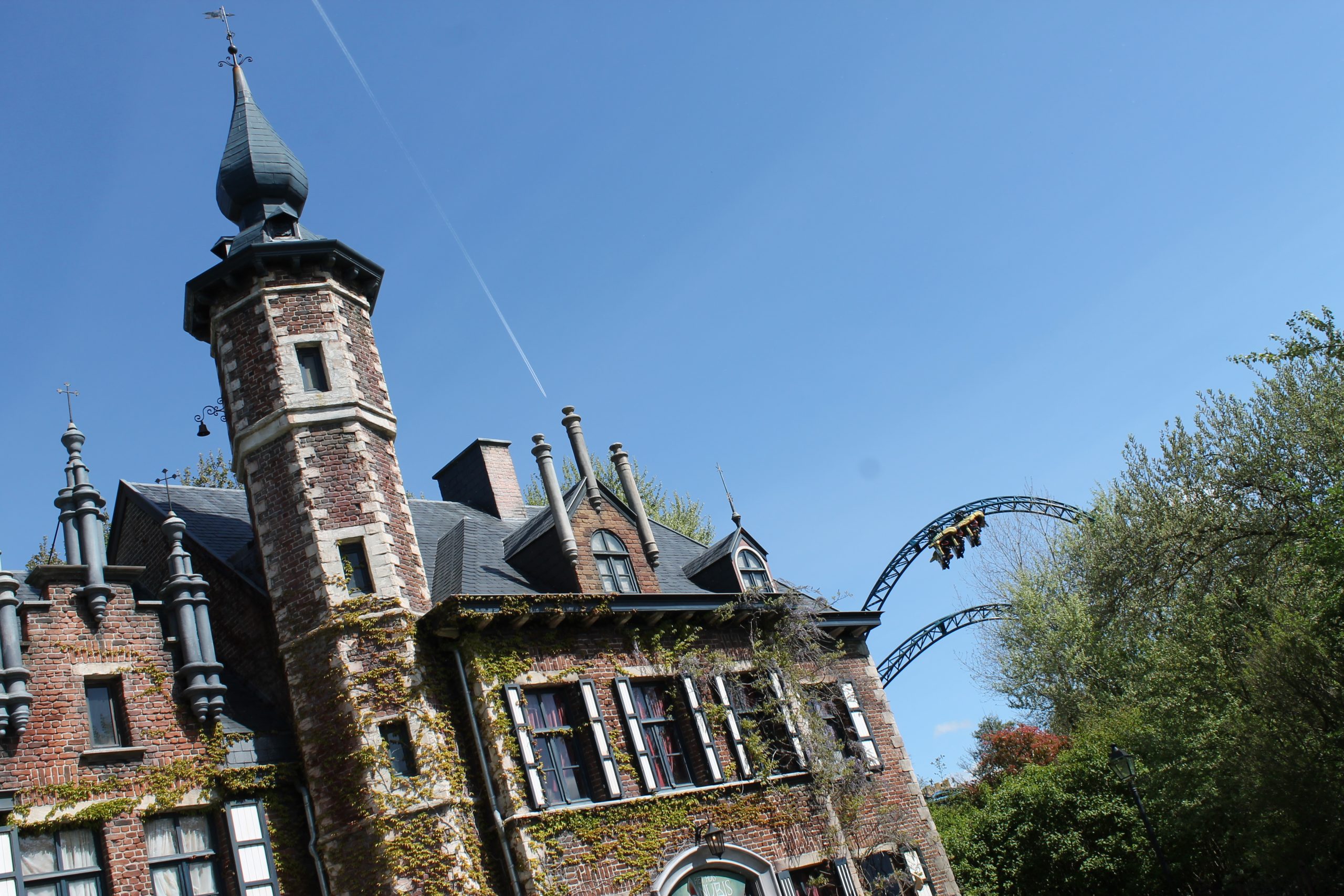 How to get there?

Public transport can offer a good alternative however as from the three main Brussels stations, you can easily ride the train towards the four parks. Even though it is the furthest, Plopsaland De Panne is the only one with a direct connection (Station: De Panne). Then, it’s only a 5 minute walk to the entrance. Walibi Belgium has its own train station (Station: Bièrges-Walibi), but you’ll need one transfer. But once you’re in the train station of Walibi, it’s also a 5 minute walk.

For Bellewaerde Park, there is a direct train connection to station Ieper. From there, you can ride a bus towards the park. The same applies for Bobbejaanland where you’ll need to take the train to the Herentals station. There should be a bus to the park. (Although that bust line is currently under discussion.)

Also note that the easiest way from the airport towards the city center is by train. Simply go to the lower level of the airport and pick a train that passes through Brussels.

What not to miss in Brussels?

When looking at tourist books and websites, this is one that will definitely pop-up as not to miss. Not only is there the interestingly uneven 15th century Town Hall building, but you can also discover beautifully decorated guildhalls. If you enjoy Main Street U.S.A. at Disney parks, this is a real treat for you. 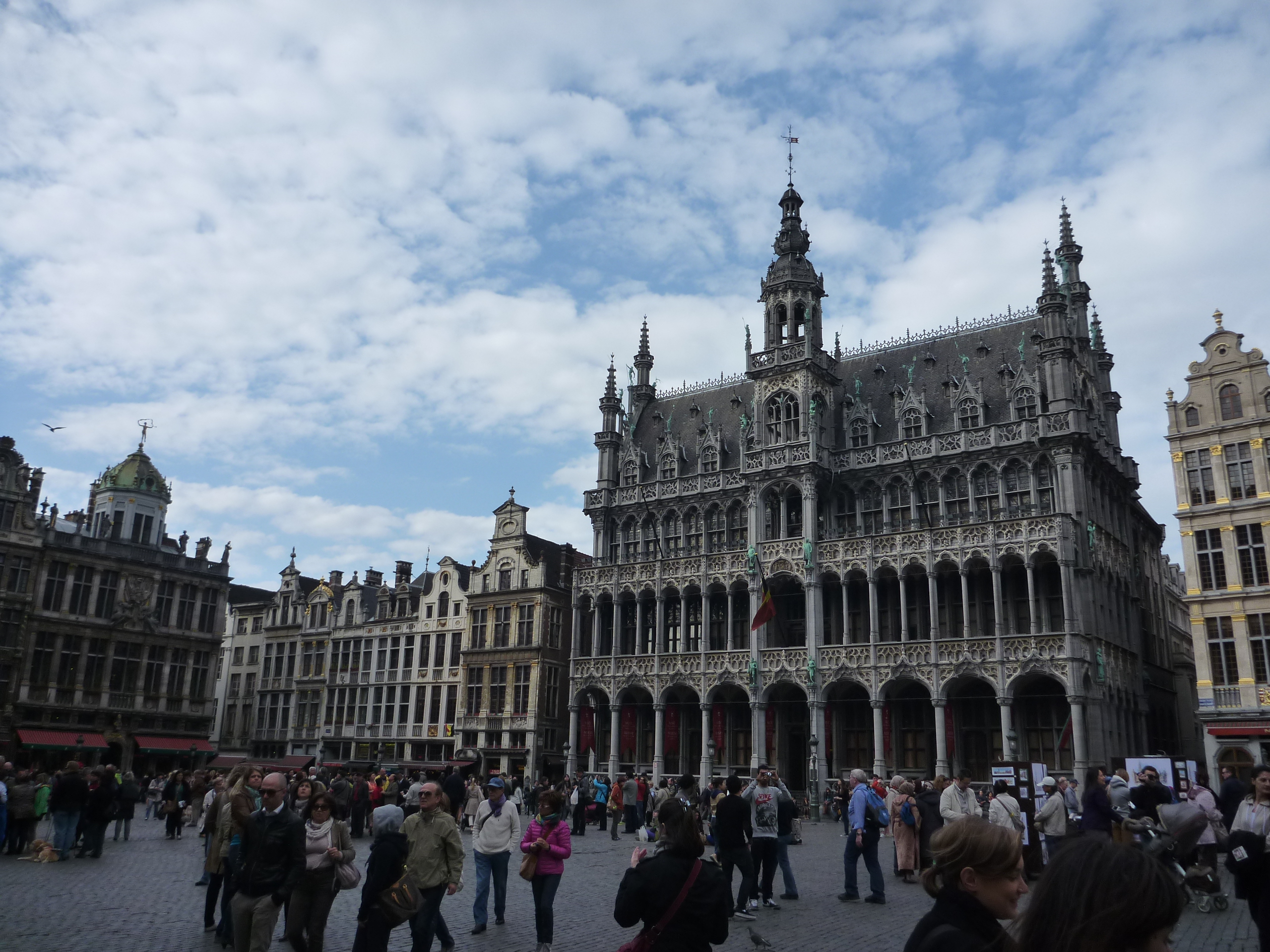 The Atomium can be considered as one of Belgian’s best known national monuments. It’s fairly recent compared to other historic buildings in the country. It was built in 1958 for the World expo: Expo 58. It represents an atom of iron but oddly enough, the construction is made out of aluminium. To be honest, the inside and view from atop aren’t the most spectacular so seeing it from the outside covers your checklist. Right next to it, you can also visit a miniature version of Europe: Mini-Europa. 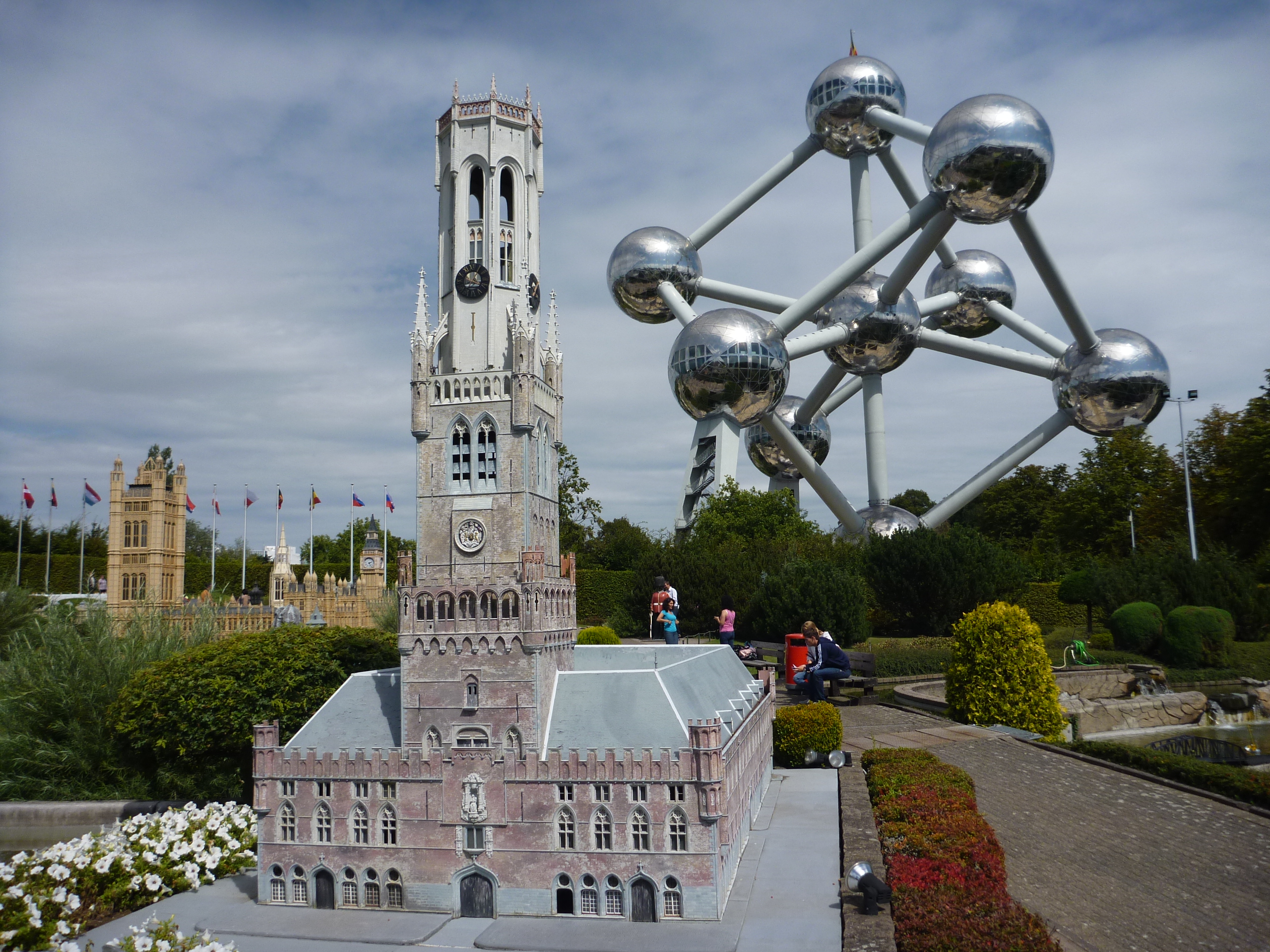 Small yet world famous: Manneken-Pis. The pissing statue attracts loads of visitors every year who want to see the legend. There are several versions of the story, one describing him as a hero for peeing on a burning fuse that would have set off several explosions all over the city. The statue often gets dressed up with costumes depending on events, seasons and more. 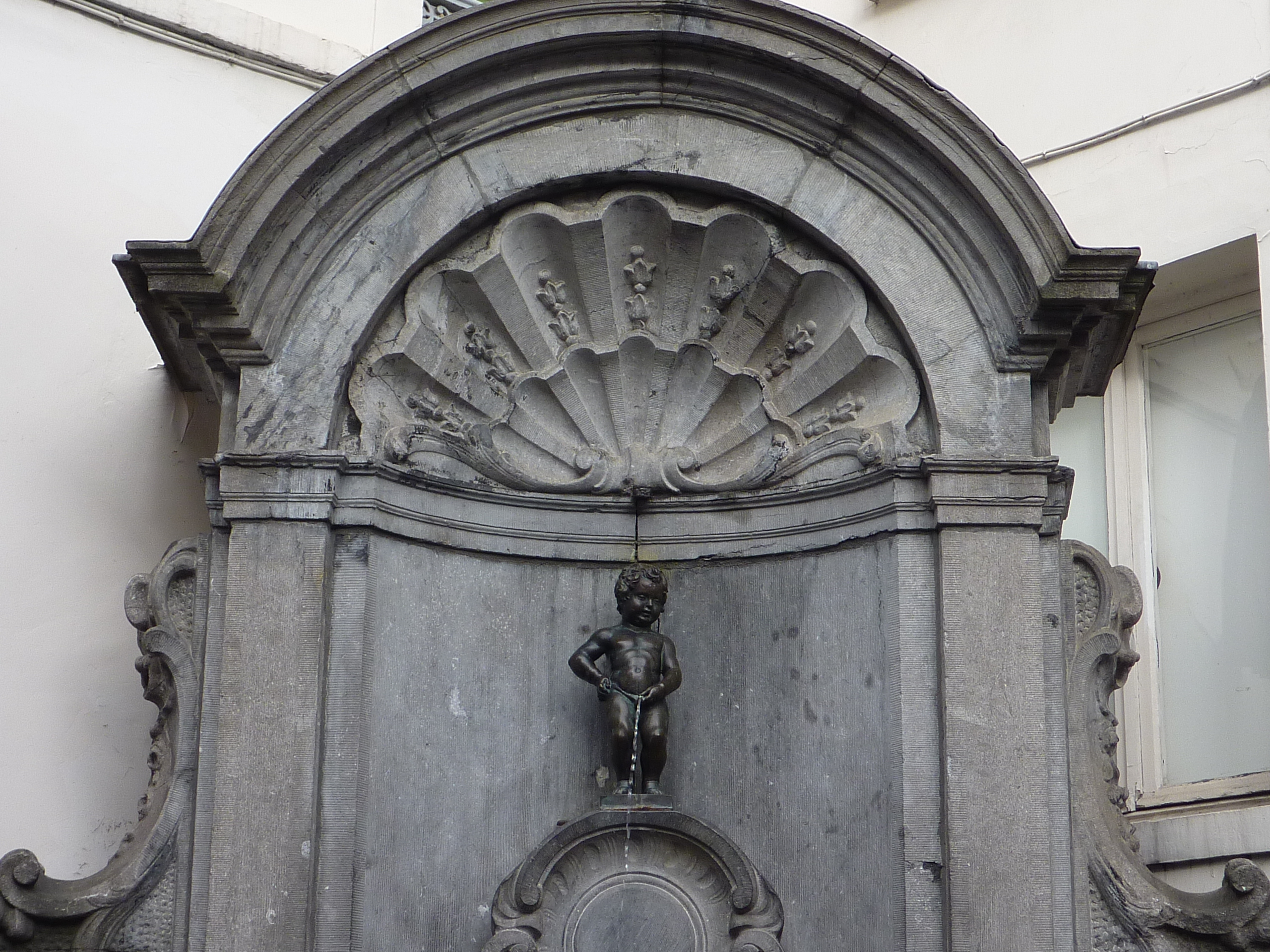 So basically, this is a classic. Why included separately then? Well, since 1987, there’s also a female version to be found in the city: Jeanneke Pis. You can find it near the Delirium Cafe which offers more than 2000 different beers all in their respective glass. So two reasons to go and see the girl piss! Do note that both statues might be a bit underwhelming once you see them. Jeanneke Pis for example has to be kept in a locked cage due to vandalism. 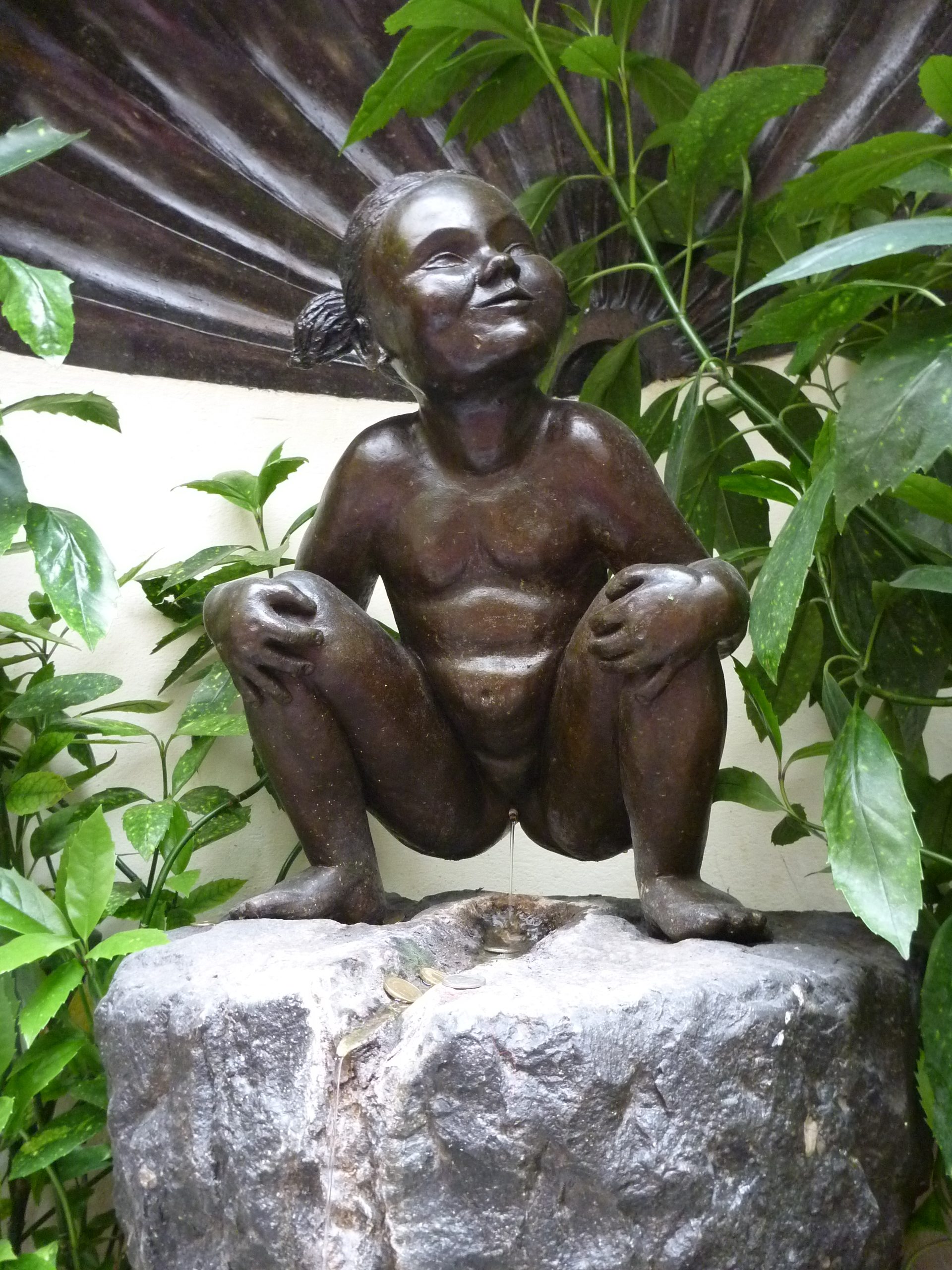 The Music Instrument Museum has two reasons worth visiting. Number 1, the museum offers a collection of over 1,000 different instruments to discover. And as much as it is interesting to watch paintings or statues, it’s nice to have a different kind of museum to visit for once. The second reason: location. The beautiful building stands on top of a hill (Monts des Arts / Kunstberg) and on the top there’s a restaurant with a beautiful view. Also the area’s quite nice to hang out and take a break.

This neighborhood has got a permanent flea market and it feels like being taken back in time. It’s at the foot of the Palace of Justice, a beautiful building but under renovation for years now. If you like antiques or just walking around a different kind of setting than a normal shopping street, you’ll like it here.

During April and May, in line with the start of the theme park season, you can visit the greenhouses near the royal palace of Laeken. It’s basically the main home of the Belgian royals. Not to be confused with the Royal Palace of Brussels, in the city center which is more used as “working office”. But back to the royal greenhouses as every year, you can see the blooming of the flowers directly in the gardens and greenhouses of the royals. Plan your visit early during the day as queues can be quite long in the afternoon, especially in the weekends. 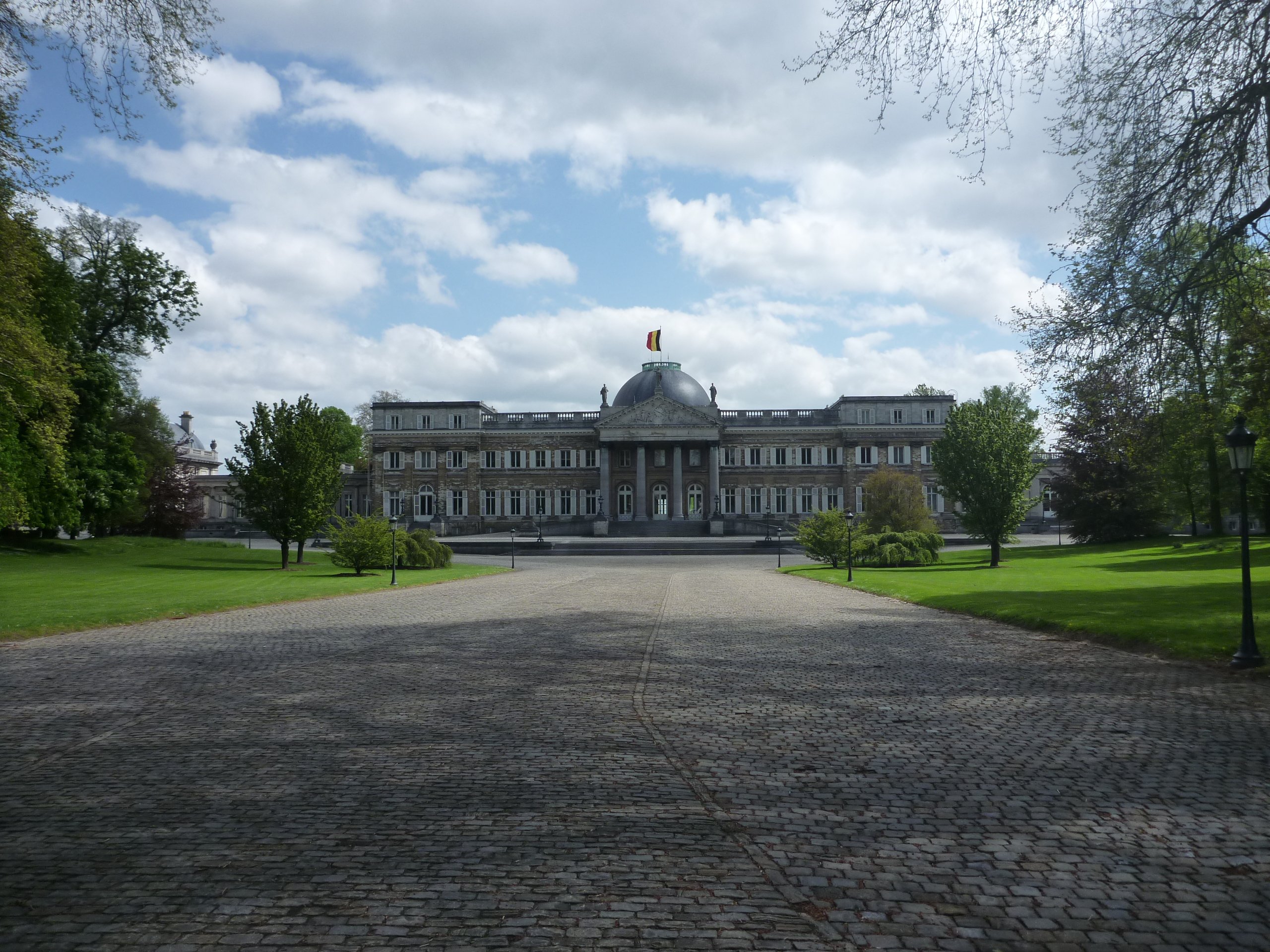 These are just 5 tips, but there’s obviously more to see. Also consider to visit:
– The European Parliament and the European District, the more business side   of Brussels
– The Magritte Museum, with more than 200 artworks from the artists in display
– Matongé, the African heart of Brussels
– Ter Kamerenbos/Bois de la Cambre, a park on the edge of the Sonian Forest
– Shopping in La Rue Neuve/Nieuwstraat or, if you like it more expensive, at Louiza/Louisa
– Take the train to Bruges, Ghent, Antwerp or Liège for a day trip or longer. Especially the first two offer you a walk right back into the middle ages.

Tips for the parks?

That’s it for this first European Coaster City Trip! Join us next time for another European city close to the parks!