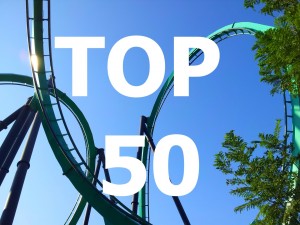 We’ve rated and reviewed many coasters and rides over the last few years, and although we’re usually not fans of listing/ranking rides or parks, we do create an annual California TOP 50! You might, and likely will, disagree, and that’s totally fine! That’s what this TOP 50 is all about! Of the many rides in the state, we selected the 50 we think are best! Here are places 30-21 in the California TOP 50 of 2016!

We would like for you to understand that all rides in our TOP 50 went through our own rating/ranking system that created a TOP 50, the way we think the rides are ranked best! By the time the entire TOP 50 has been published, our minds may have changed, because with this much variety and top quality rides in CA, it’s insanely hard to get to a ranking. We’ve ridden all the rides again in 2016, and thus our list differs from previous years. Here’s part THREE, enjoy!

30. Revenge of the Mummy: The Ride

Revenge of the Mummy is a Premier Rides launched coaster themed to the hit moving series of the same name. The ride starts with a detailed and well themed dark ride section before kicking into high gear with a surprisingly powerful launch. The ride features both a forwards and backwards roller coaster the section. Although the theming is a little lackluster throughout the roller coaster sections, the speed is there, and the fast paced back to back turns and hills keep riders well entertained. Although not a perfect indoor coaster, Revenge of the Mummy is a very fun ride, and one of the highlights of Universal Studios Hollywood. 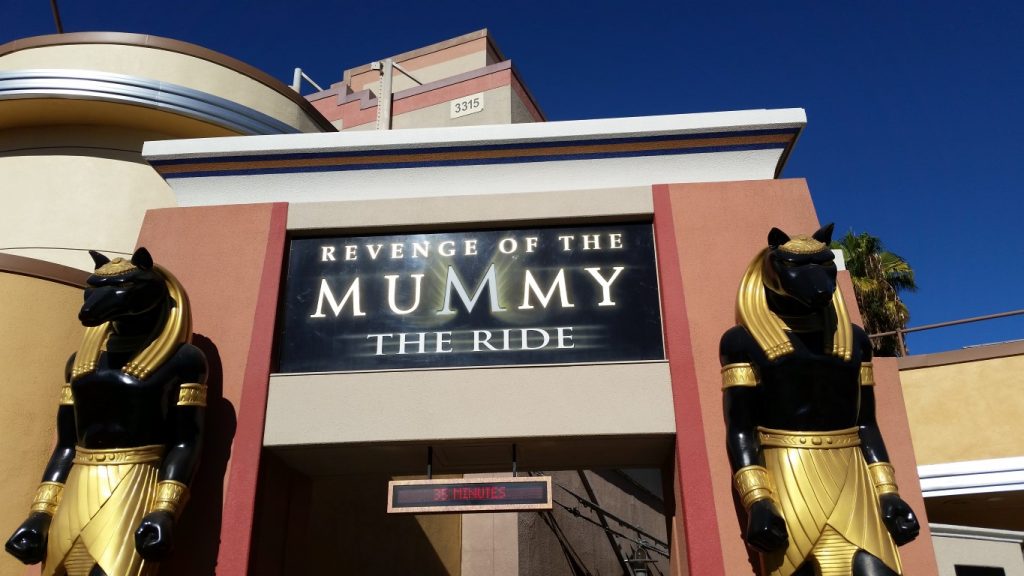 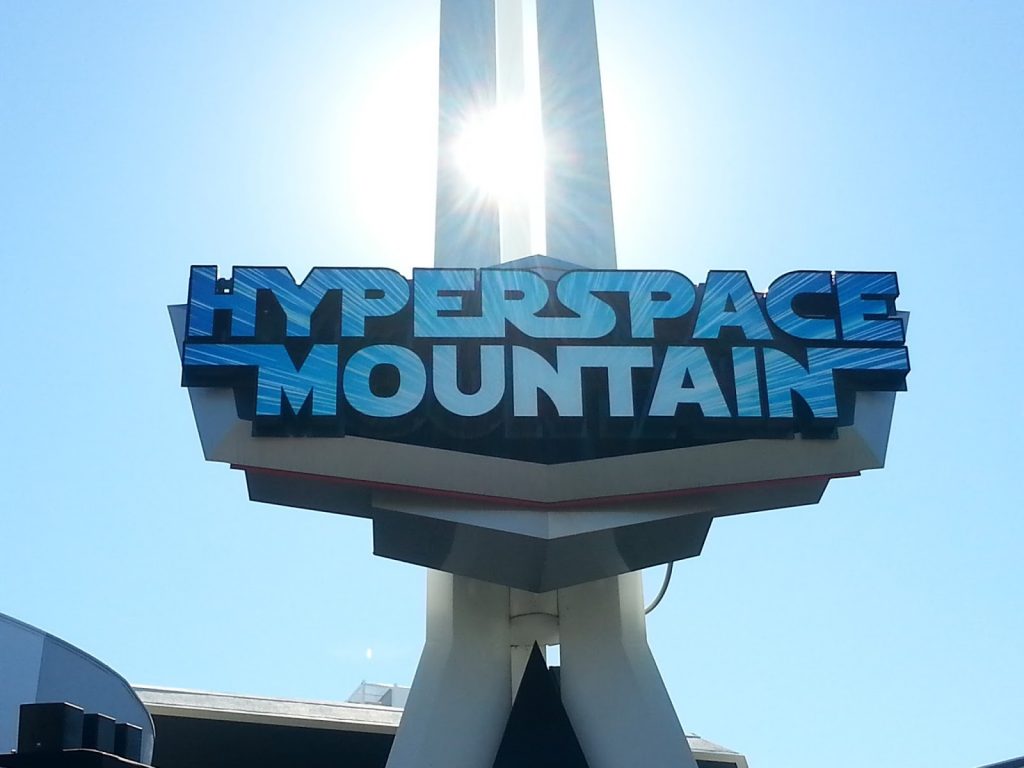 Radiator Springs Racers is the flagship attraction of Cars Land at Disney’s California Adventure, and one of the most impressive attractions in the state in sheer scale and technological achievement. The ride begins with a brief outdoor section in which riders get to appreciate the incredible detail they put into the massive desert environment. You then enter the indoor dark ride section which features some incredible digital animatronic figures with 3D projection to animate their faces. Lastly, you get to put your speed to the test, racing another vehicle at up to 40 miles per hour through curves and over hills, even providing the occasional pop of airtime. Radiator Springs Racers is one of the best rides in its respective park, and one of the best themed attractions in the state. 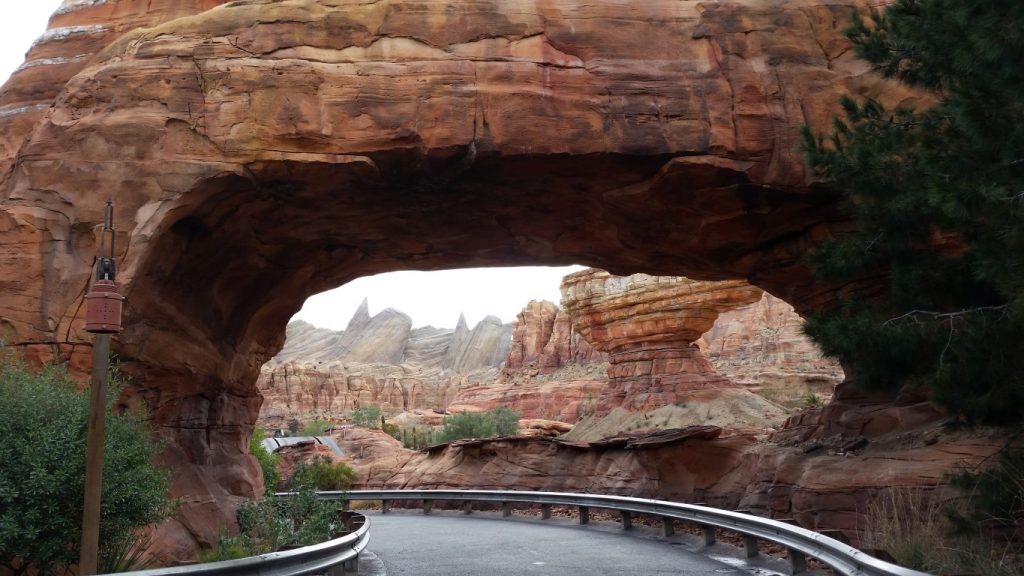 Blasting riders BACKWARDS out of the fortress of solitude, this record-breaking launch coaster reaches speeds of maximum 104 MPH, then shooting 400+ feet in the air. Face down, riders will experience 6.5 seconds of total weightlessness shooting up and down the coaster’s massive 415 ft tall tower, getting an amazing view of the park and surrounding mountains. 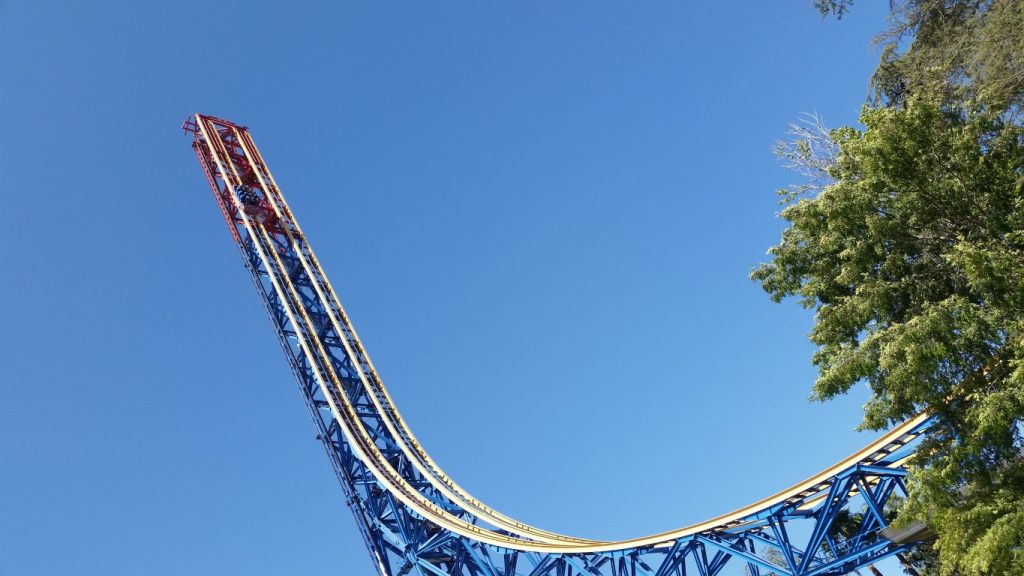 California Screamin’ is often forgotten about, as the Disneyland Resort isn’t particularly well-known for its roller coasters. Nonetheless, this 6,000+ ft long coaster features almost everything we look for in a coaster. The ride’s set over a boardwalk and a small lake, features a launch, tunnels, drops, a loop, and a bunch of hills and turns. The coaster is also super efficient and dispatches a train of 24 riders every 36 seconds! Guests never wait in line that long for this ride, and get to experience the World’s longest coaster to feature an inversion and on-ride soundtrack! Make sure to ride the Disneyland Resort’s most thrilling attraction when you’re at the Disney California Adventure Park next time, California Screamin’ is rather underrated and is worth the trip! 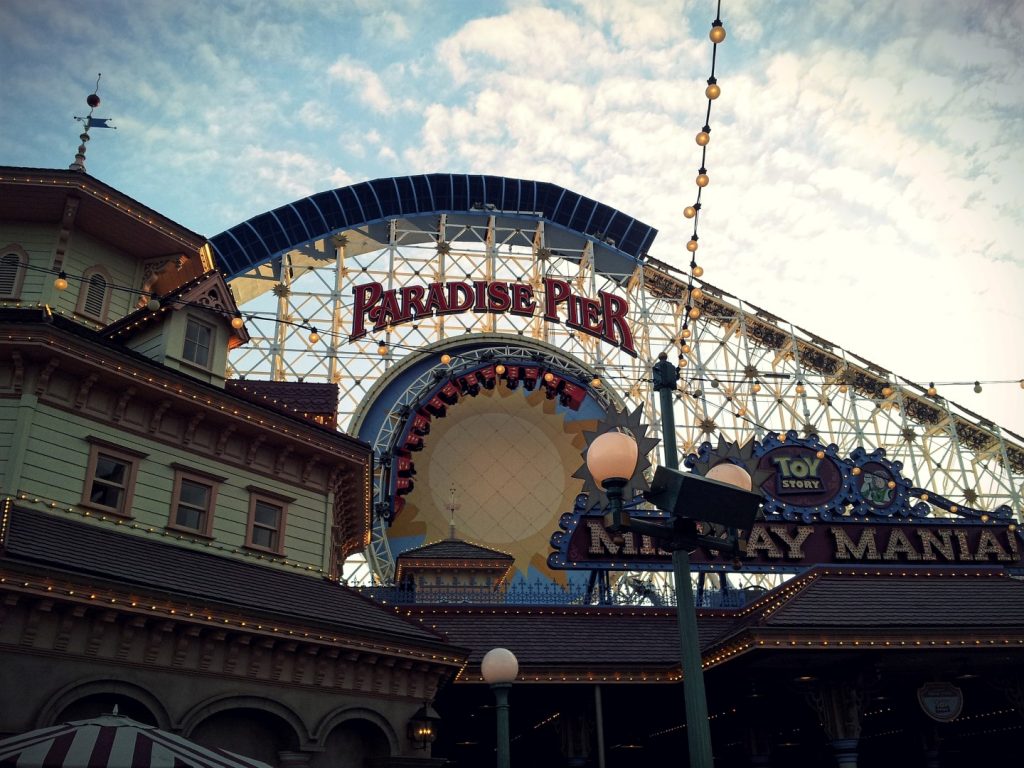 The Giant Dipper at the Santa Cruz Beach Boardwalk is the epitome of a seaside classic. Built in 1924, The Giant Dipper still provides one of the best wooden coaster experiences in California. The ride wastes no time getting started with an incredible pre lift section in the pitch dark. The setting of this ride on a gorgeous section of Santa Cruz’ coast only adds to the zeitgeist of this coaster as riders approach the drop. The double out and back layout provides excellent airtime coming off the back of pretty much every hill, which is occasionally interrupted by intense, even painful, lateral force on the turnarounds. The ride is still smooth, yet forceful. Between the history, soul, and ride experience that the Giant Dipper delivers, it has secured itself a spot in the top 25 attractions in the state. 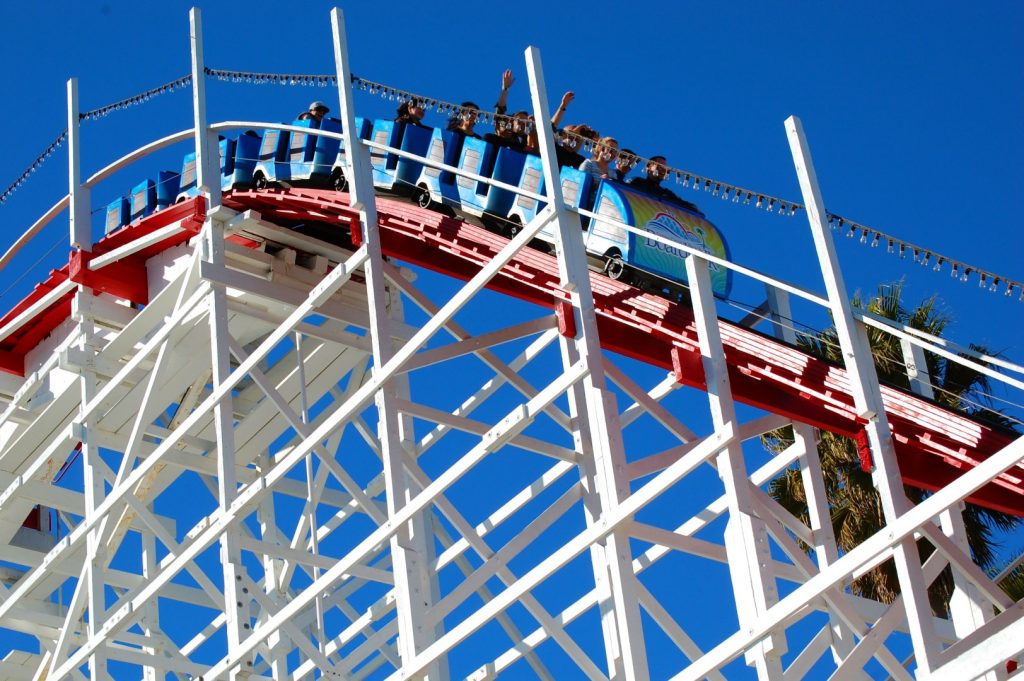 If you’ve been reading our content for a while, then you’ll likely have figured that we love Viper. This Arrow looper is the last remaining 7-looper from the company and is rumored to be removed next year. The coaster may be rough around the edges but still delivers a fun and old school intense experience. The coaster features one of the best drops around, twisting riders 180 degrees while rushing down from the ride’s 188 height at 70 miles per hour. The coaster features the World’s tallest elevated loop at 144 feet in the sky, as well as another double loop, a Batwing, and a double corkscrew through which the train creeps. The ride’s prime location on the mountain offers amazing views from the surrounding mountain, park, and X2. Ride it before it’s potentially gone! 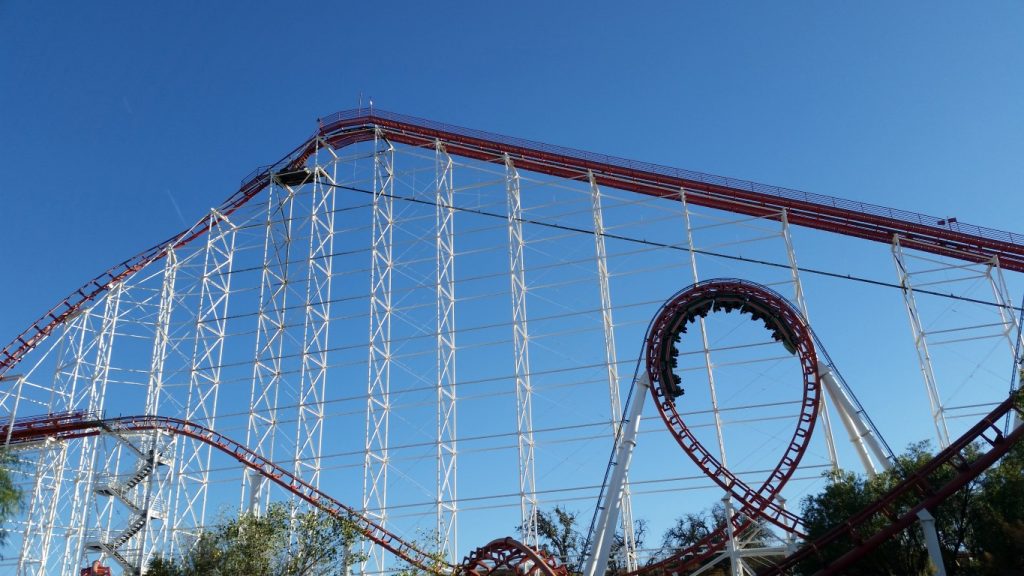 Lex Luthor: Drop of Doom opened in 2012 as the World’s tallest drop ride at an uncomfortable height of 400 feet.The sheer height may seem frightening enough, but if you’re lucky (or unlucky) a train from Superman will come up, violently shaking the tower side to side. After a quick pause at the top, you plummet to the ground as you are pushed up into your restraint by negative forces, reaching speeds of 85 miles per hour during a drop that lasts an entire five seconds. It’s a simple ride, a drop tower, but Lex Luthor: Drop of Doom is a smooth, beautiful, and truly terrifying experience, thus its spot on the list. 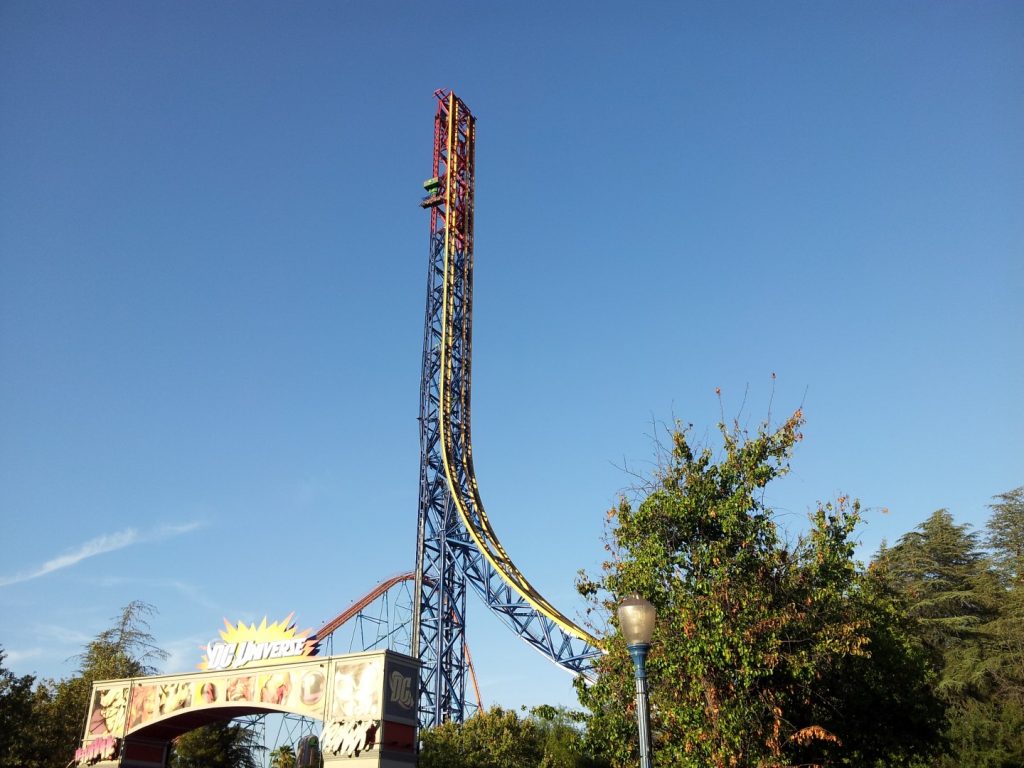 Not only is Ninja a very rare type of coaster, a Suspended Swinging Coaster, it’s also uniquely located on the hillside of Six Flags Magic Mountain, interacting with the water ride Jet Stream, below. Ninja’s 2,700 feet of track used to navigate a forest, sadly a lot of the trees have been taken out or cut in recent years. Nonetheless the ride’s most appealing experience, the swinging of the cars remains, of course. The ride’s position on the hillside means that there are two lift hills. A small one at the start of the ride, after which the trains navigate their way down the mountain past the Jet Stream lake at 55 miles per hours, before hitting the final brakes at the bottom of the hill. After this, the anticlimactic long second lift hill brings the train back to the station, located on top of the park in Samurai Summit. Overall, this is one of those coasters that is perfect for riders of any age. It’s mild enough for younger children to enjoy, and mild enough for older guests. Nonetheless the ride contains a thrill-aspect, making it appealing to everyone. It’s one of the coasters at the park that you ride for fun. 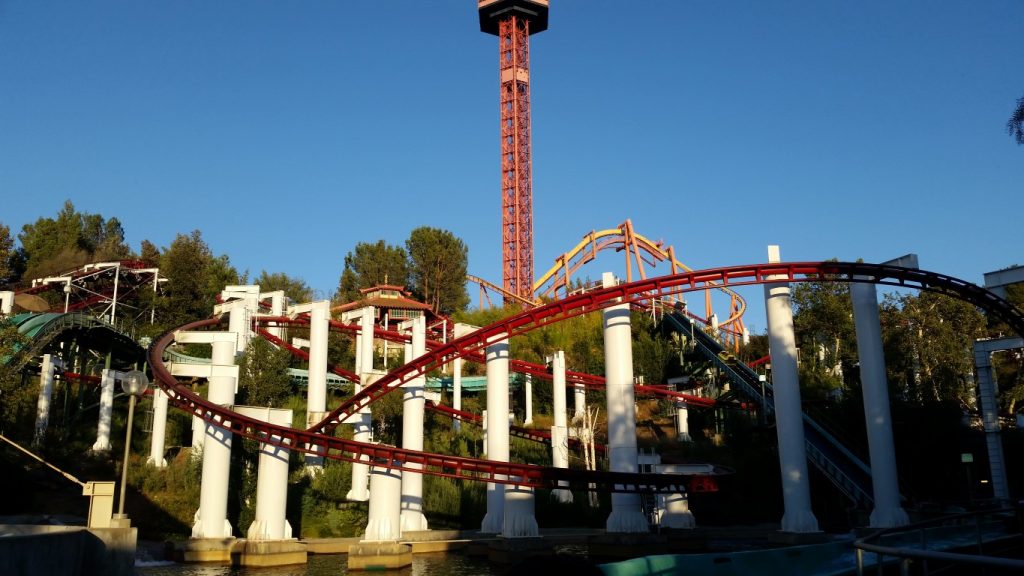 We could not leave out the World famous Studio Tour at Universal Studios Hollywood of course! Not only is this attraction a real-time tour through a real working movie and television studios, it’s also about an hour long. Guests get to see the famous sets, dressing rooms and production bungalows, sound stages, and props during their tour around the studios, which would be a stand-alone separate admission attraction elsewhere. In addition, the tour features several attractions through which the tram rolls to show off amazing special effects, such as the Flashflood, Jaws, and Earthquake: The Big One. The trams are also the ride vehicles for two of the World’s largest simulator attractions, King Kong 360 3D and Fast & Furious: Supercharged. Combine all these smaller attractions, simulators, all the sets of the real working studios, and the hour-long tram ride, and you got one of the most entertaining experiences in the World. 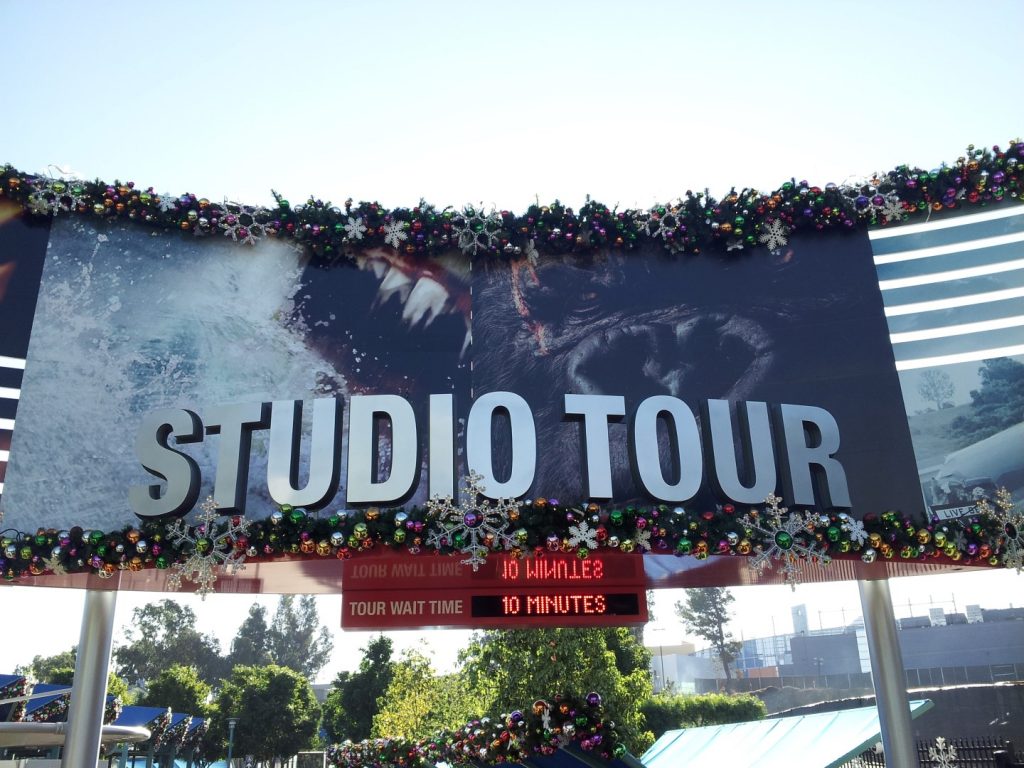 Thanks for checking out the California TOP 50 of 2016 Part 3. We’re launching Part 4 next week, and it will be incredibly exciting as we narrow down some of the most amazing rides ever created and get to a final top 10 soon! Check out spots 50-41 and 40-31!

Follow us on our social media for exclusive coverage! Facebook–Twitter–Instagram