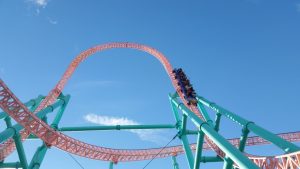 Let’s start with the fact that on weekends (and October 31st) there’s SPOOKY FARM at Knott’s, which is a trick-or-treating filled family-friendly Halloween activity. It’s actually set up very well, with all Ghost Town characters that you usually see roaming the streets with makeup and interacting with the younger guests. There are also trick-or-treat stations located throughout Ghost Town. (Make sure that if you visit with a kid, to pick up an orange trick-or-treat bag upon entering). 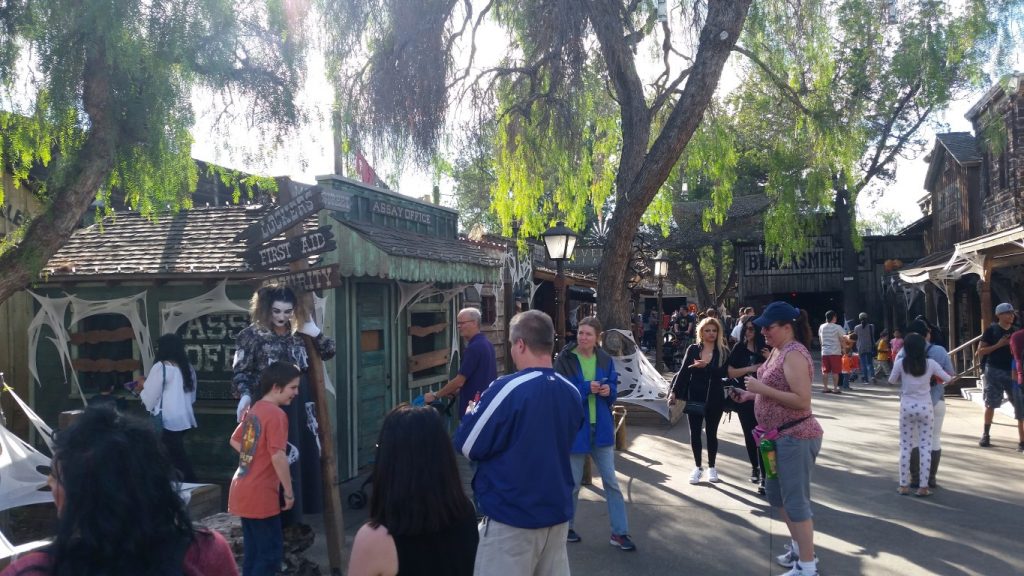 Of course there’s a special show in Camp Snoopy, named: “The Monsters Are Coming Charlie Brown”. Now I’m personally not the type to sit out this kind of show around tons of kids and families, but from the 30 seconds I saw, people seemed to enjoy it. 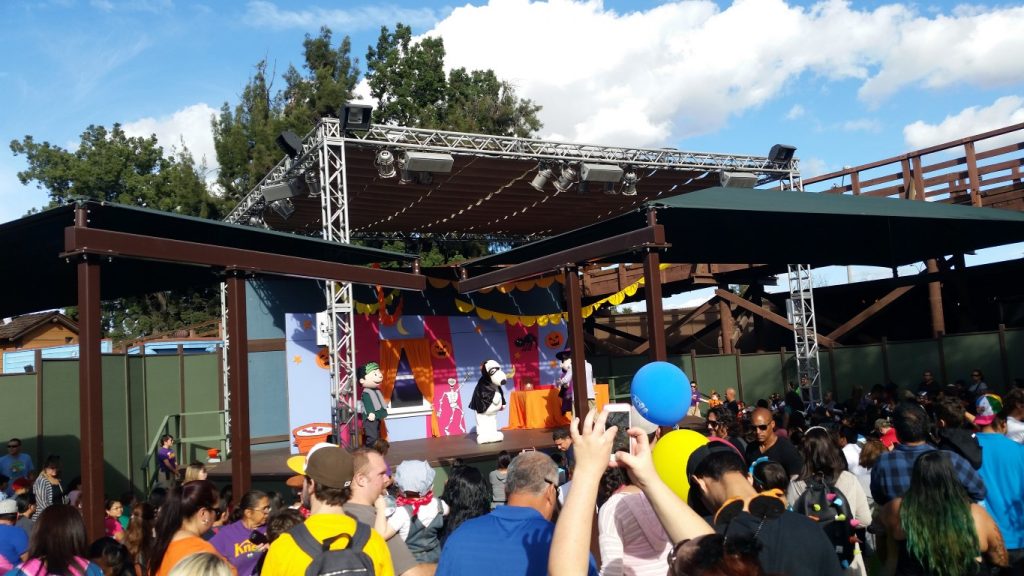 The Meet ‘N Greet area of Camp Snoopy has been dressed accordingly for the season. It’s cool to see that this Spooky Farm stuff is all around the park, including the most-blatant location: Camp Snoopy. 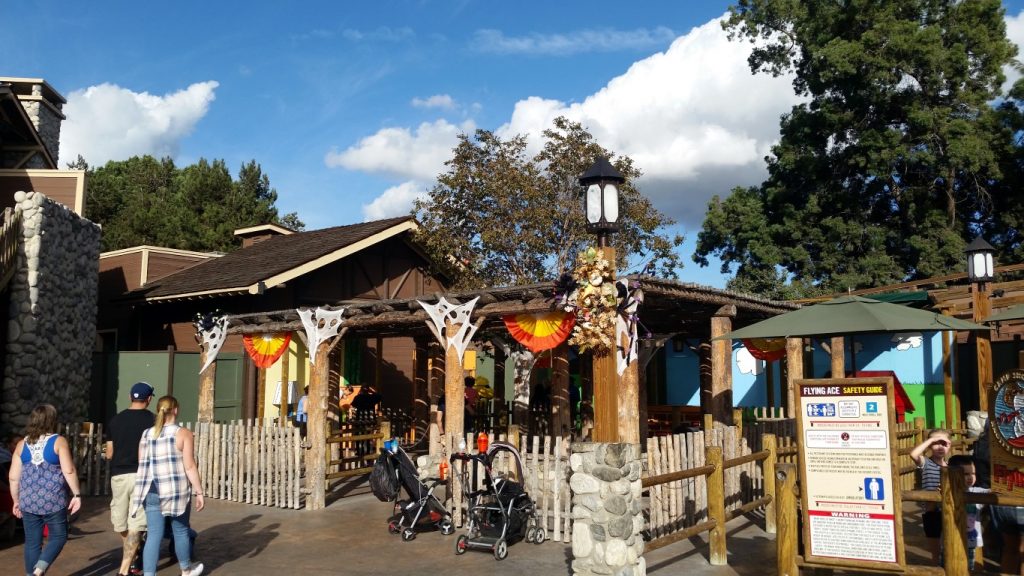 In Fiesta Village there’s a small Dia De Los Muertos celebration, where the park’s mini-maze for kids is also located. 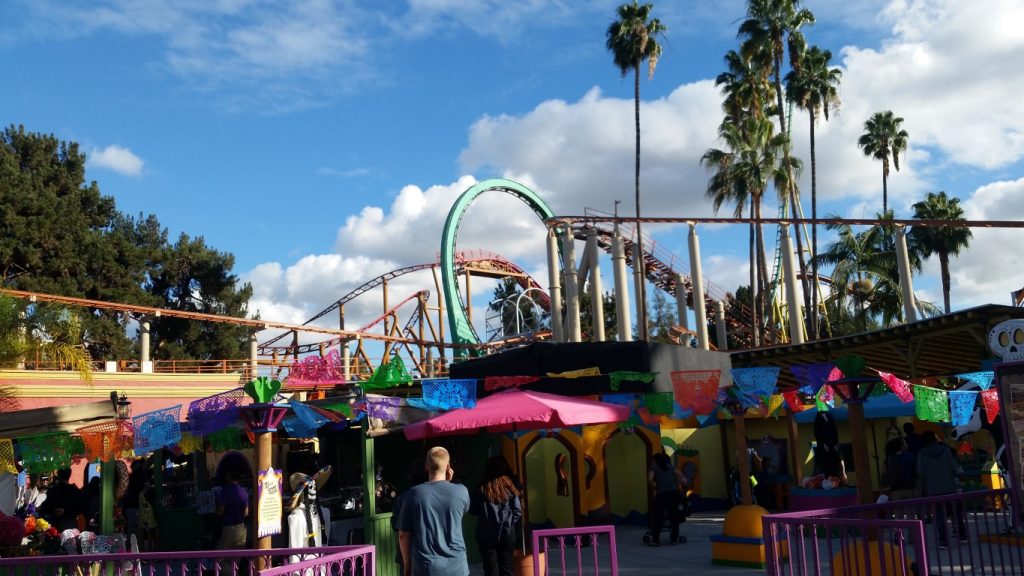 There are educational and vending booths set up for families to enjoy the Dia de Los Muertos celebration. 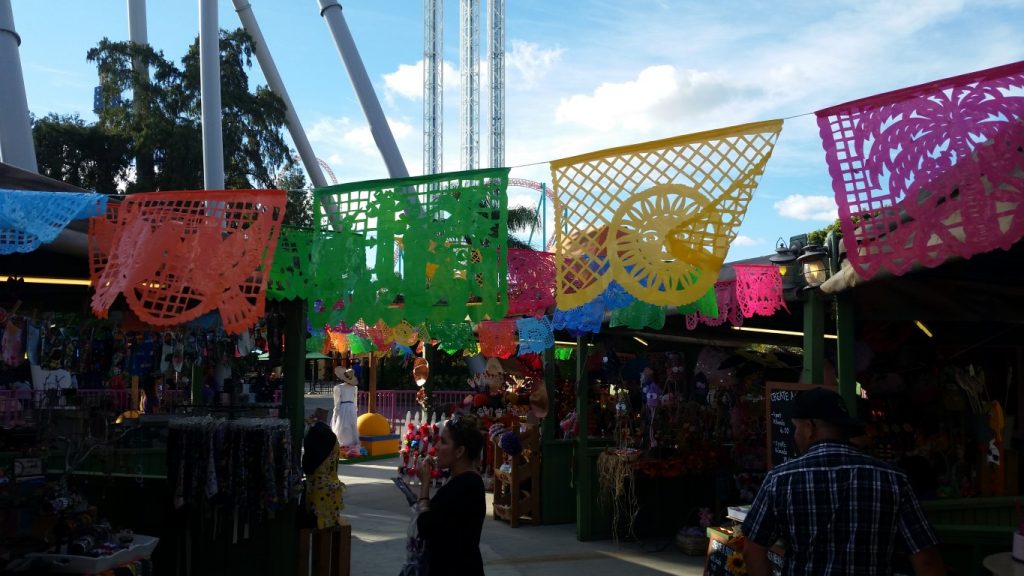 Of course there’s also a cookie decorating station, but what really struck my attention is the Windseeker warning on the door behind it. 🙂 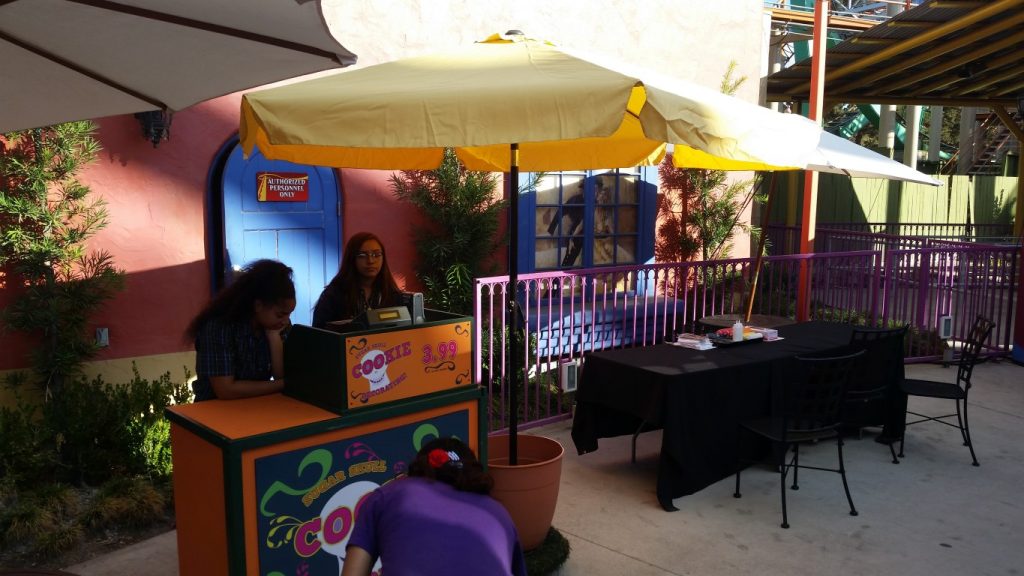 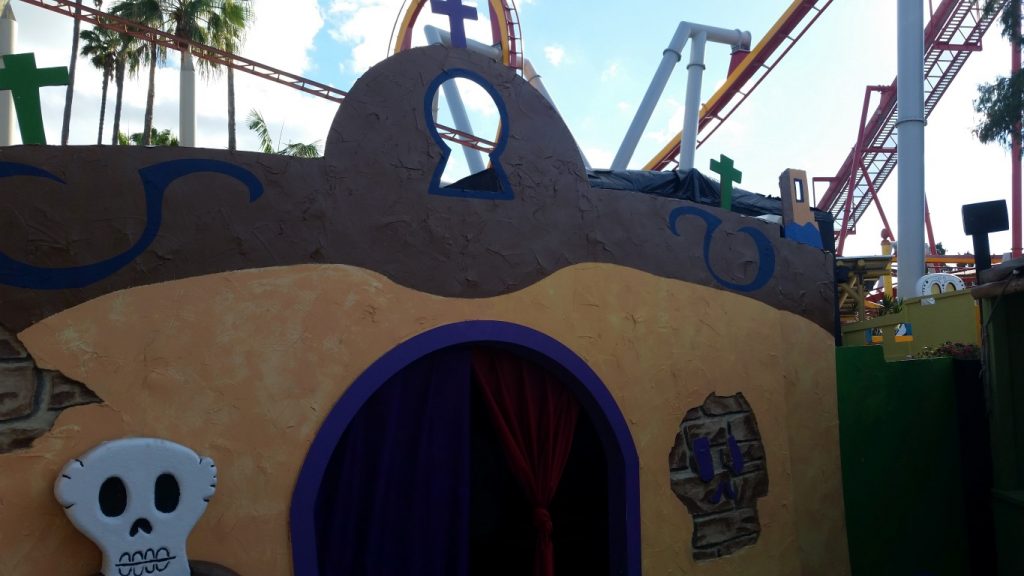 Oh look, I manage to still relate this to coasters, as Montezooma’s Revenge launched through its loop right above the activities! 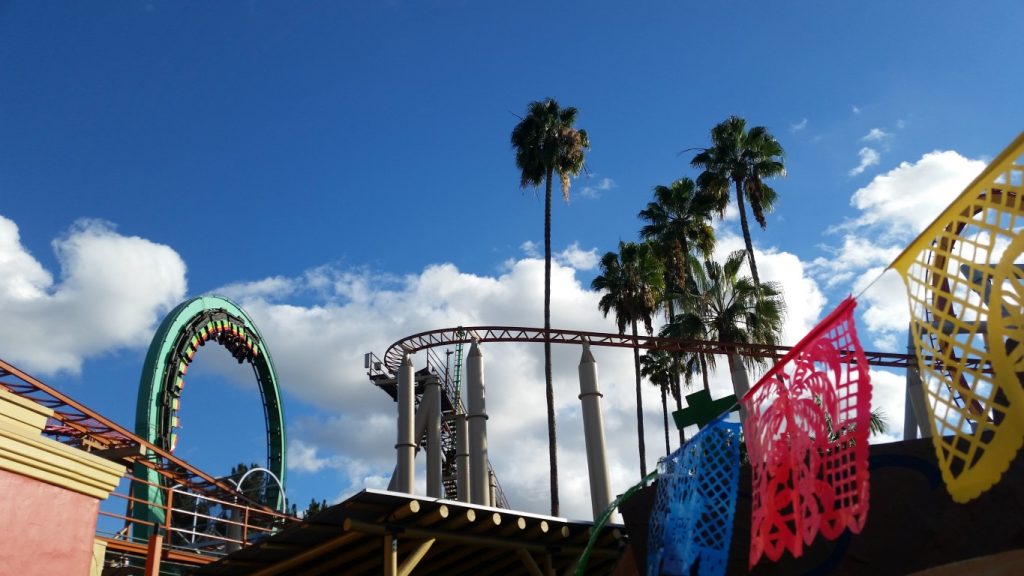 Before moving on there are some random notes from all around the park. In case you did not know, the Grand Sierra Railroad is closed during Knott’s Scary Farm each year, as the Gunslinger’s Grave: Blood Moon Rises is located on and around the tracks. 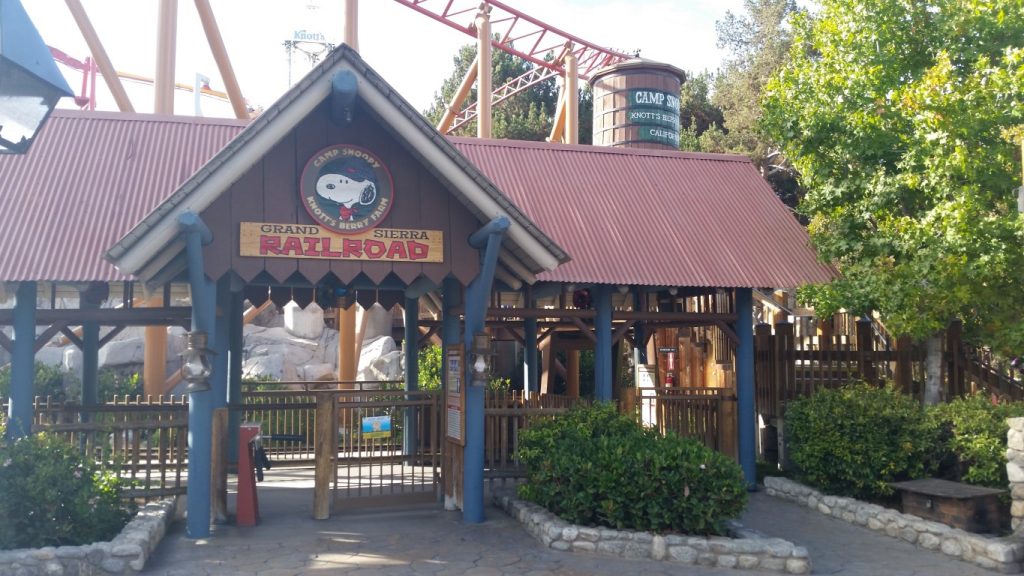 The train is stored on a storage track below the Montezooma’s Revenge launch. 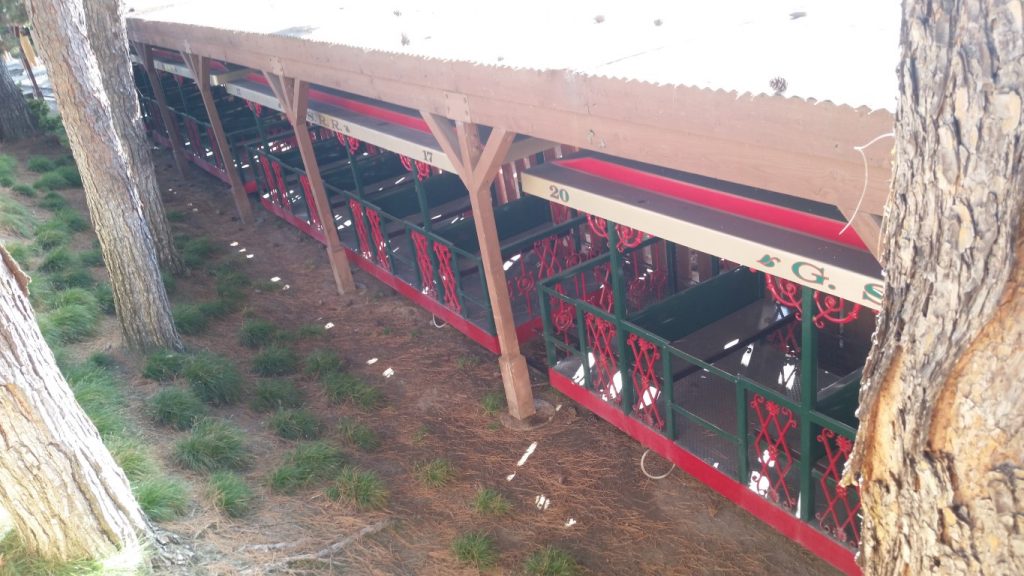 The bridges and caves in Camp Snoopy are closed during Knott’s Scary Farm. Last year they were part of the Special Ops: Infected experience, now there’s a new Scare Zone “The Hollow” this year, they’re closed. During the day though, they’re accessible! 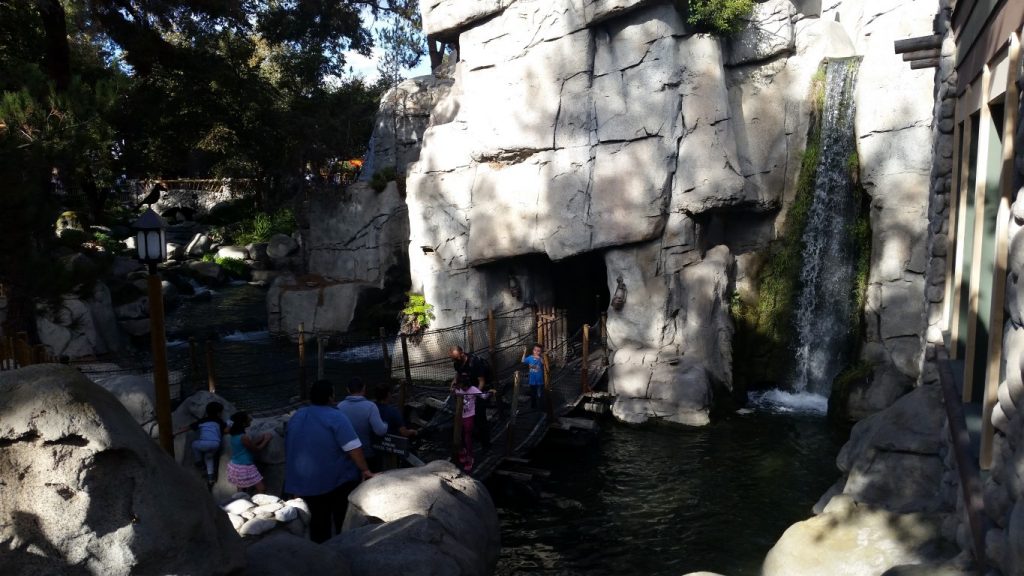 A quick note regarding the repaint of Jaguar a few months back. Most readers followed along closely as we covered the repaint, but I must say, it just looks perfect overall. The blue never worked that well. I’m hoping to one day see Montezooma’s Revenge get a yellow color scheme again, though next to Silver (yellow) Bullet we’ll have to see. 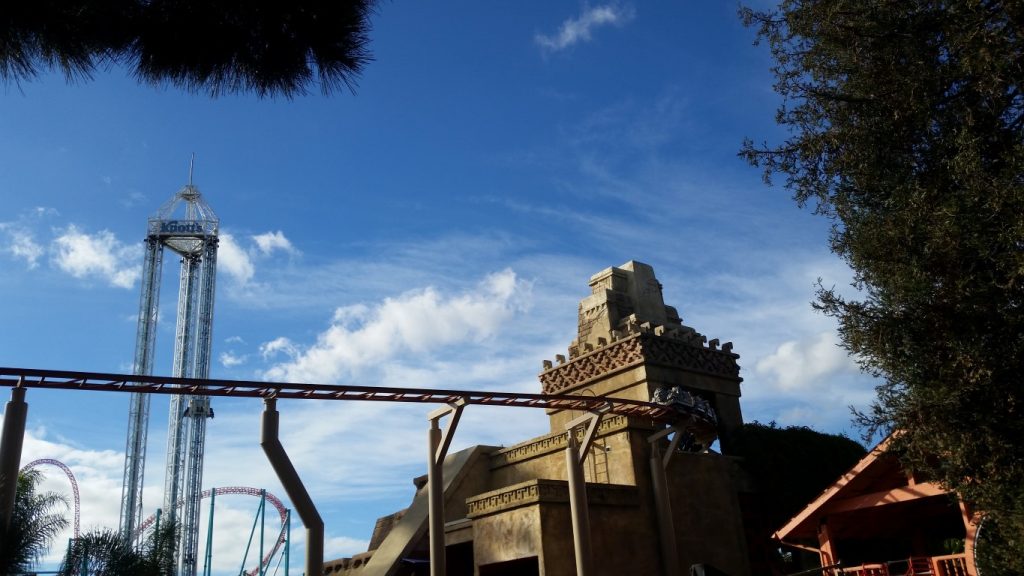 Pony Express is back to one train operations. Not to worry though, the even less-efficient full-circuit launch coaster at the park is running two… 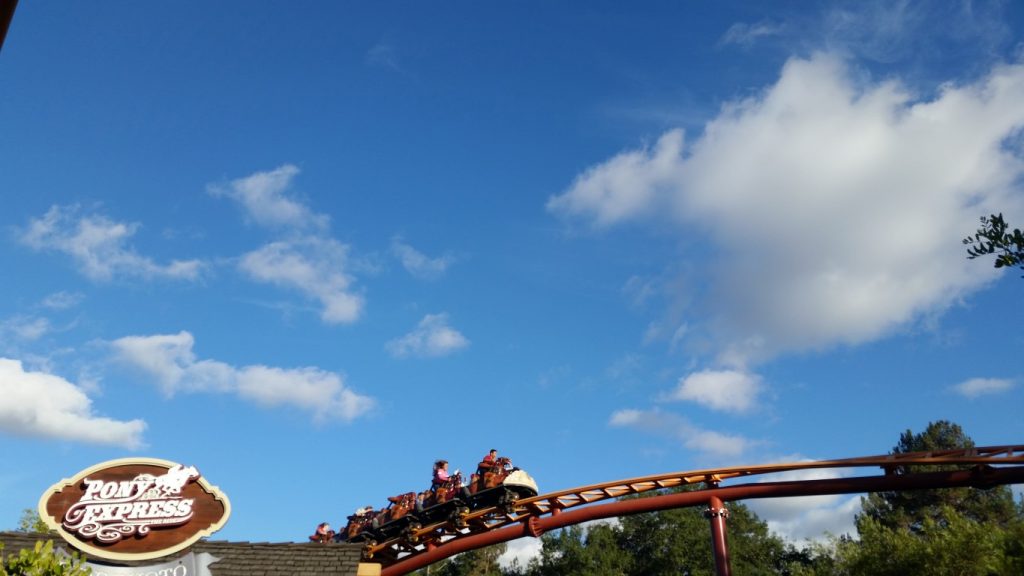 This is the first time I ever noticed a temporary line for GhostRider that extends out of the mine-shaft entry down the Pan for Gold attraction. I’ve stood here and waited before, but no line was set up. This line is set up later in the day for the insane Knott’s Scary Farm crowds nightly. Of course I made sure to, despite the line, get some rides in on this amazing wooden coaster! 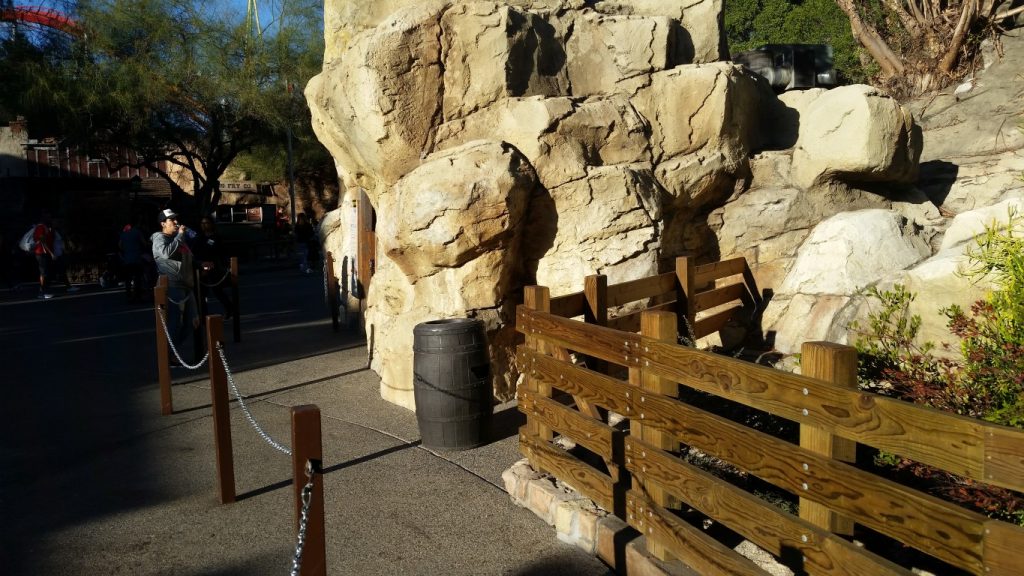 Now we’re talking about Knott’s Scary Farm anyways, make sure to visit. Because it one heck of an amazing event. A personal favorite for sure. The best days to visit are Thursdays and Halloween Monday. Saturdays are usually sold out, so try and avoid them. The event also has some sweet merchandise. The following displays are found inside the gift store at the Charles M. Schulz theater. 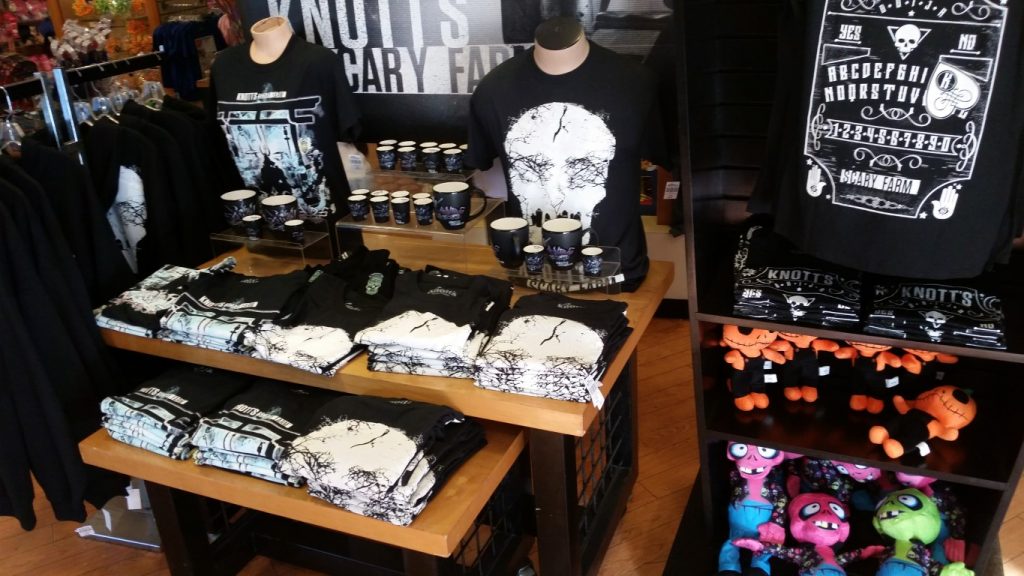 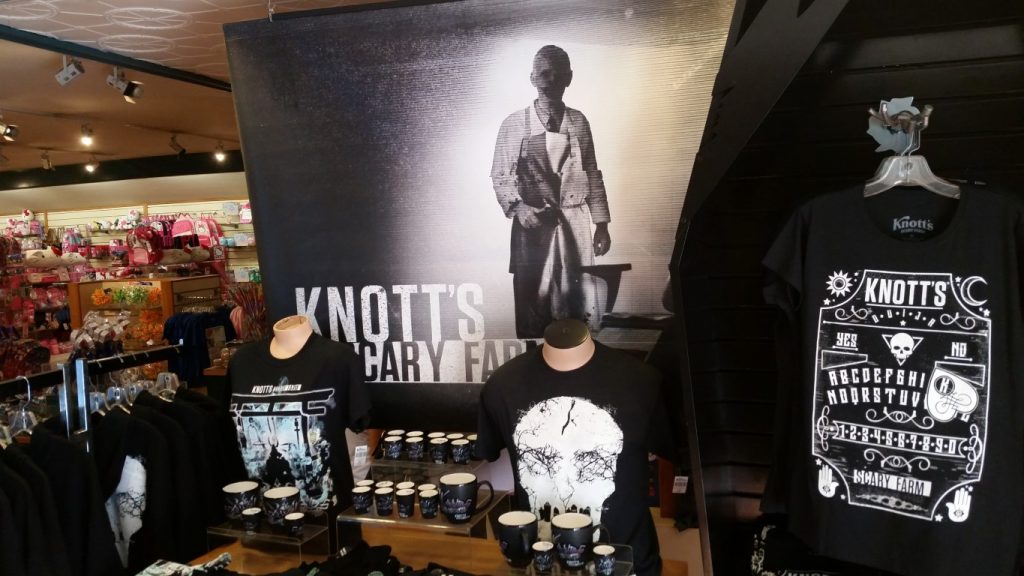 The Boardwalk and Xcelerator

Moving on to the most vibrant section of the park… the Boardwalk! 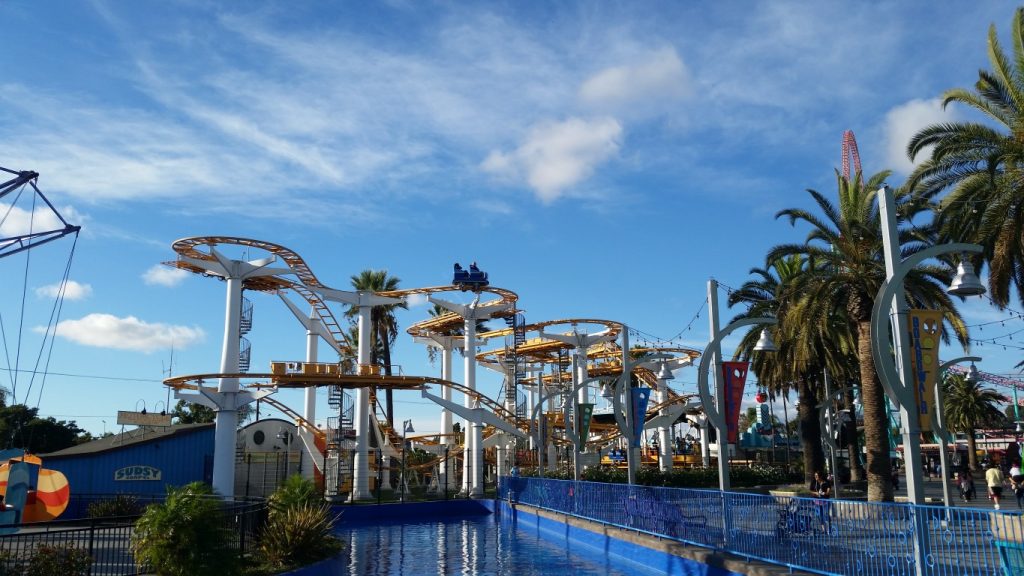 I am aware a lot of our readers dislike Boomerang, I’m the odd one that actually loves it. Nonetheless it’s one of the cooler color schemes at the park, if you ask me, so I occasionally include a picture. Boomerang placed as number 47 in our California TOP 50 of 2016. 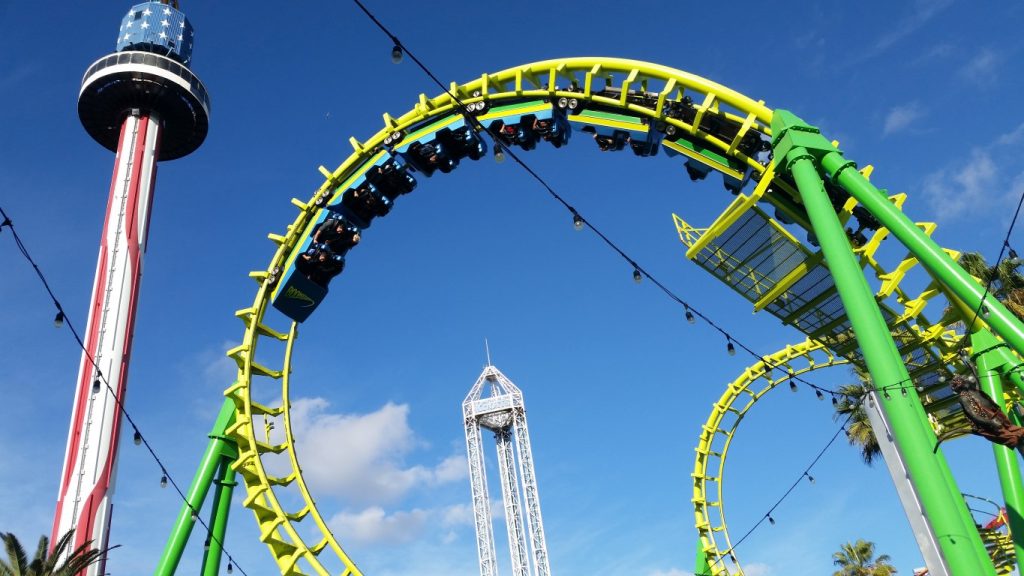 A huge thanks to Knott’s Berry Farm for running all three towers on Supreme Scream on an empty day (the third one was unloading guests). I had to wait a grand total of zero seconds in line and still had a semi-private ride on it. Wish more parks cared about capacity. 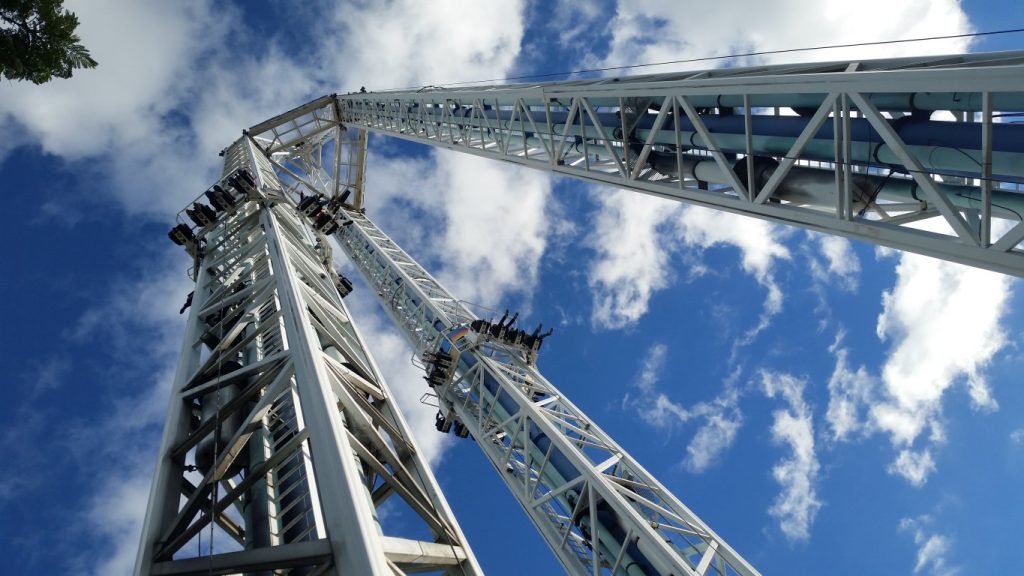 SPEAKING OF CAPACITY… Xcelerator is running TWO (yes, 2) trains! It has been a while, since January to be exact, since the ride ran two trains. Usually this last very shortly, about a week or 2, but for now both trains are being used. 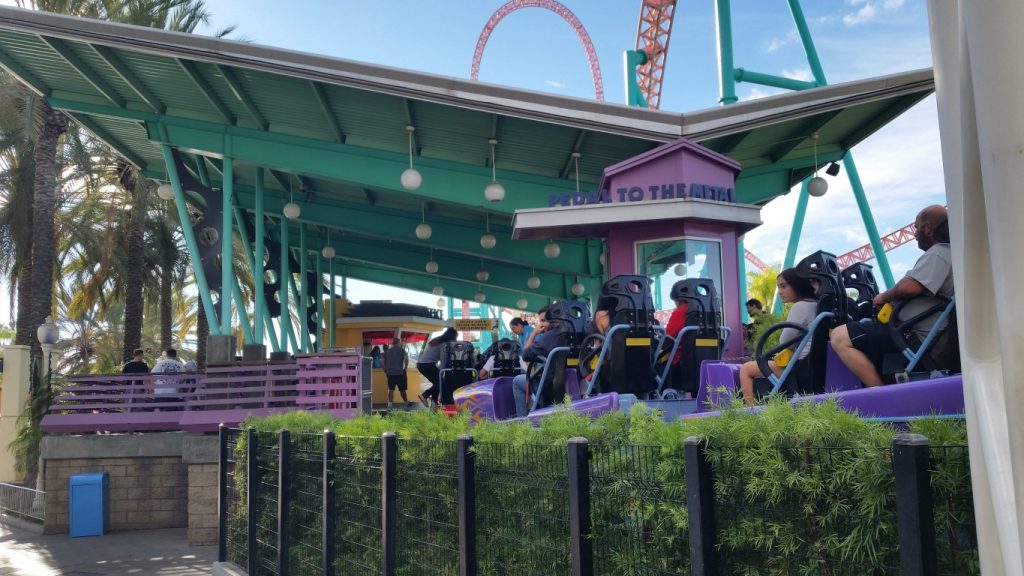 This right here is the purple train that has been running for a while, and will likely be getting a refurbishment very soon. 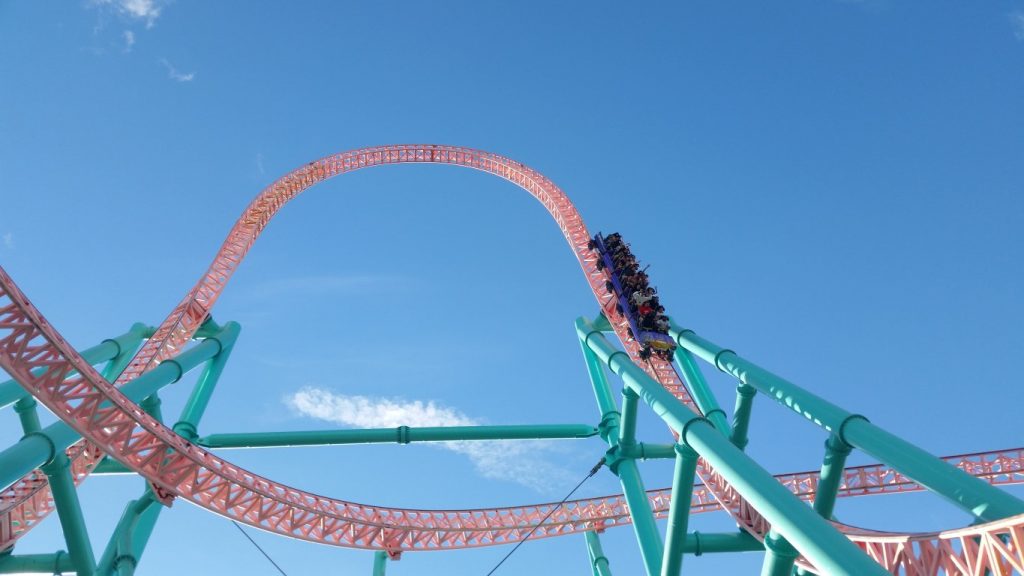 And this right here is the red train that has just been added to operations a few days ago. 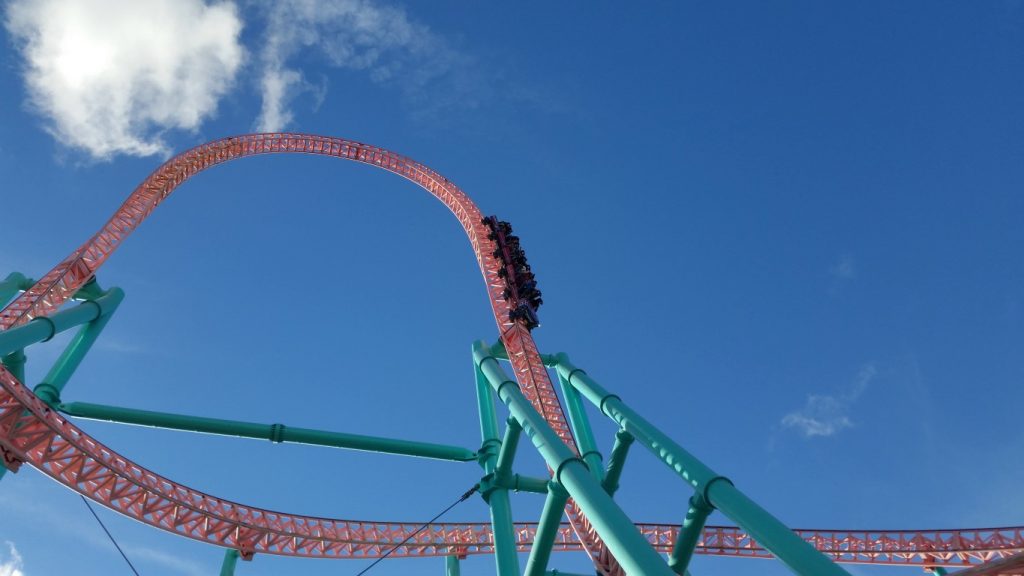 Interestingly, Knott’s apparently claimed that running the ride with two trains would put too much continuous stress on the launch system, thus it runs one most of the time. But with the Scary Farm craze it seems they’re trying again for a bit. Not that it puts too much continuous stress on the launch system, as the second train won’t roll into the station ’til the first has hit the brake run. There is really no difference in the capacity, sadly. I do though enjoy having my favorite train of the two back on the track: 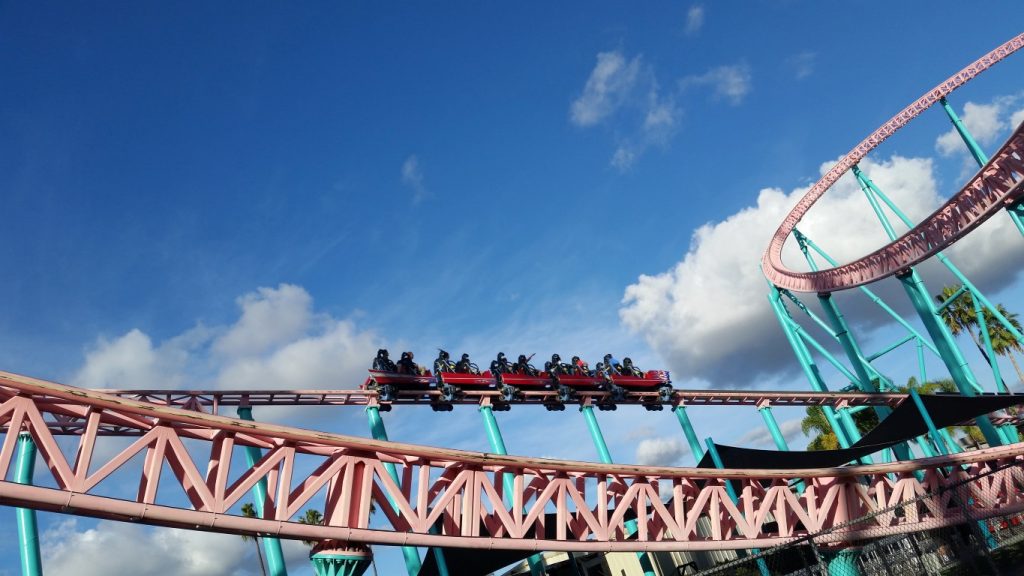 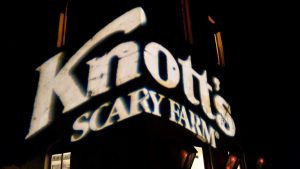 Thanks for checking out this Knott’s Berry Farm Update! Make sure to check out our Knott’s Scary Farm MAZE Ratings and Reviews, as well as the brand new Six Flags Magic Mountain Update we just launched! We have a lot more Knott’s Scary Farm information and reviews available on our Halloween page as well! Stay tuned for exciting updates and posts upcoming week!