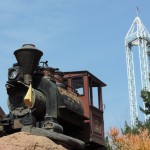 It’s that time of year again! One of our favorite events around, the Knott’s Berry Farm Boysenberry Festival, has officially started again, and it sure was a lot of fun! With new foods, new entertainment, and the World Boysenberry Pie Eating Championship, we had a wonderful day. The event in general is just simply wonderful. Join us as we take a look at this year’s event!

With all other coverage I did these couple of days, I couldn’t complete this overview as quickly as I wished for, nonetheless, here it is! We were at Knott’s Berry Farm on Saturday the 19th, the opening day of the event, for a sunny and fun Boysenberry Festival Media Day! 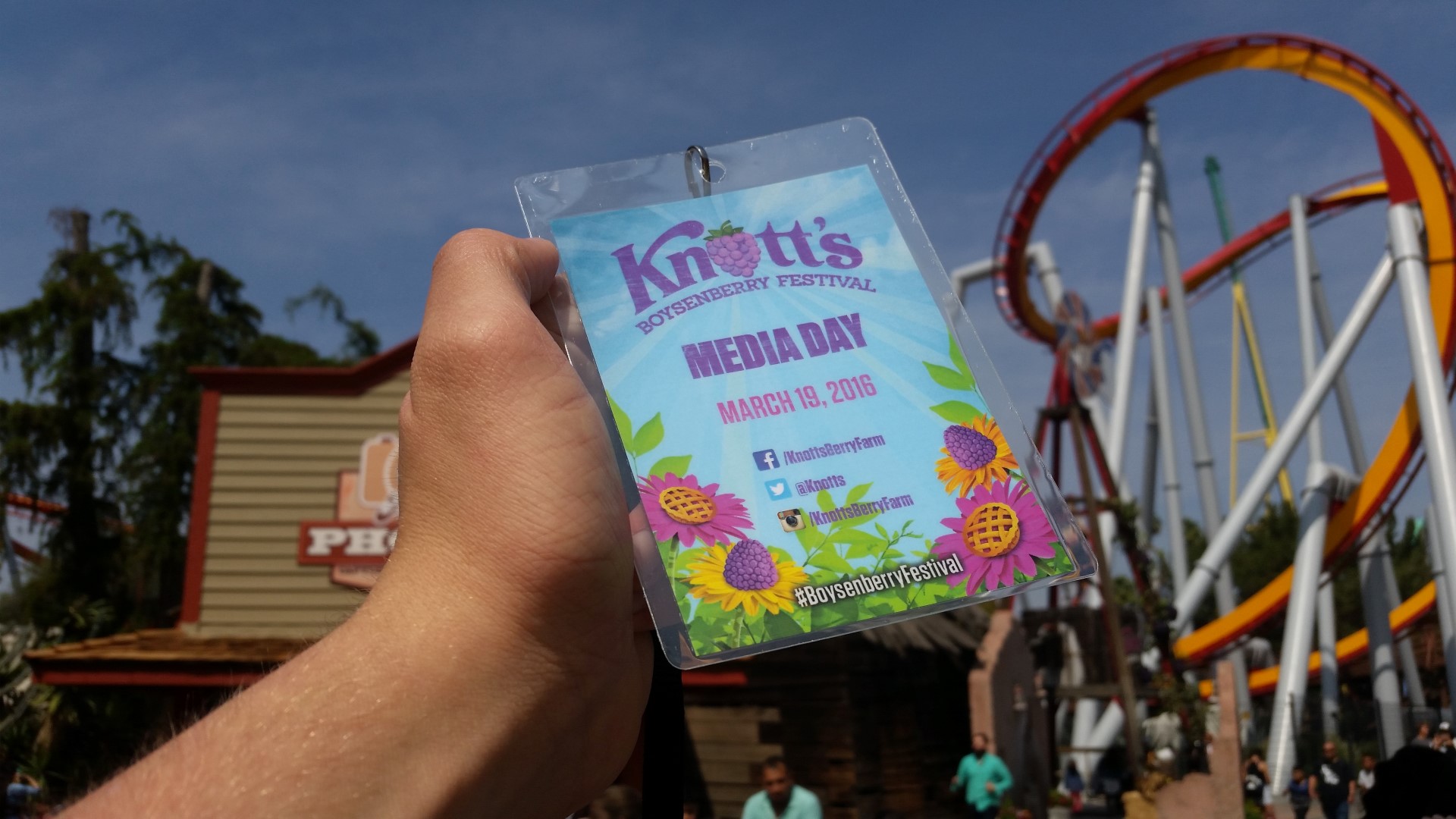 Let’s dive right into the heart and soul of Knott’s Berry Farm, Ghost Town! Notice the awesome decorations, they’re simplistic but totally add to that genuine spring feeling. Oh and boysenberries are delicious, so it’s perfect foreshadowing of the flavorful goodness to come… 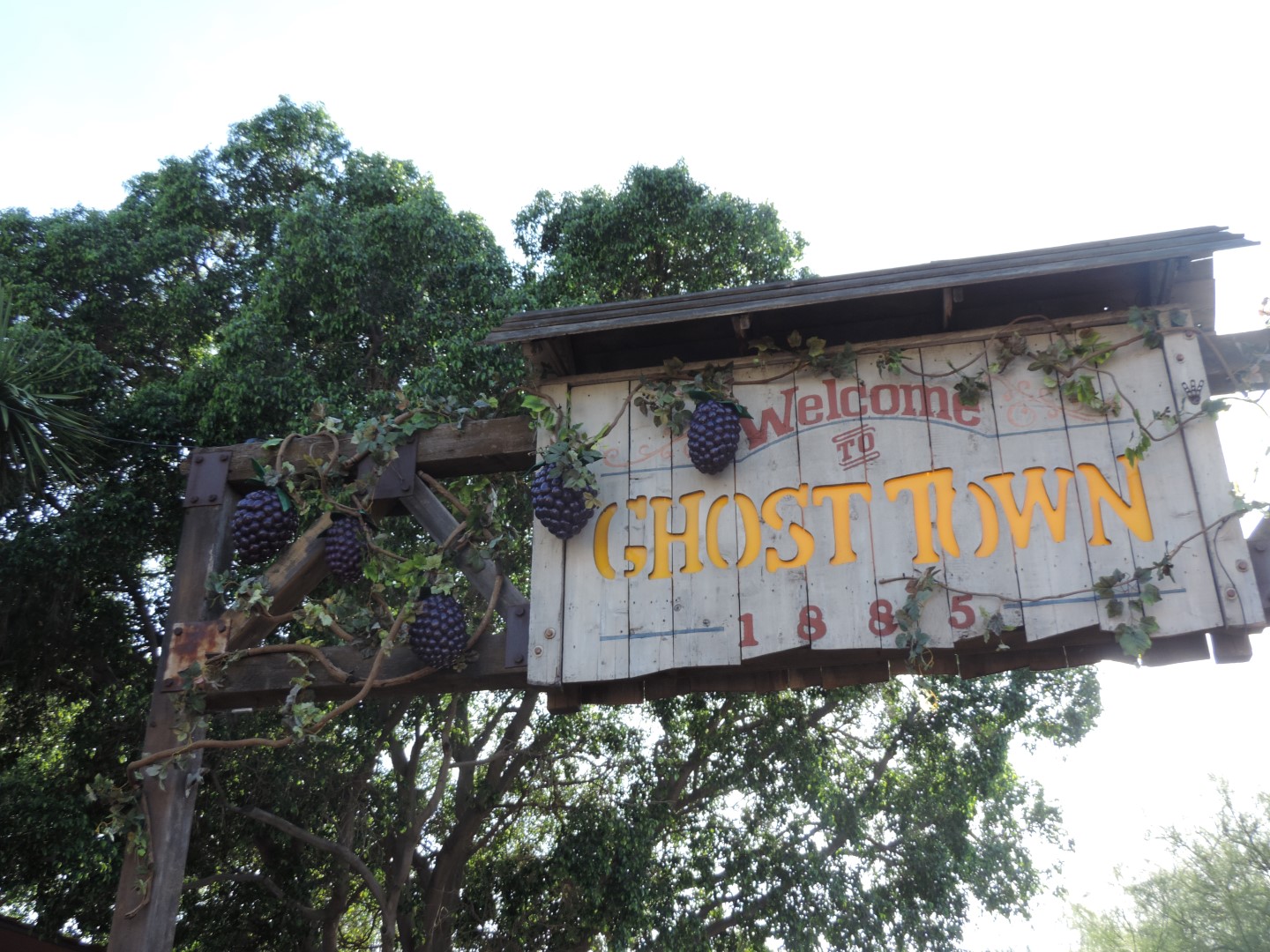 The Boysenberry festival is FILLED with entertainment, including good ol’ Ghost Town interaction with guests at an interactive ‘show’; the Berry Jamboree. 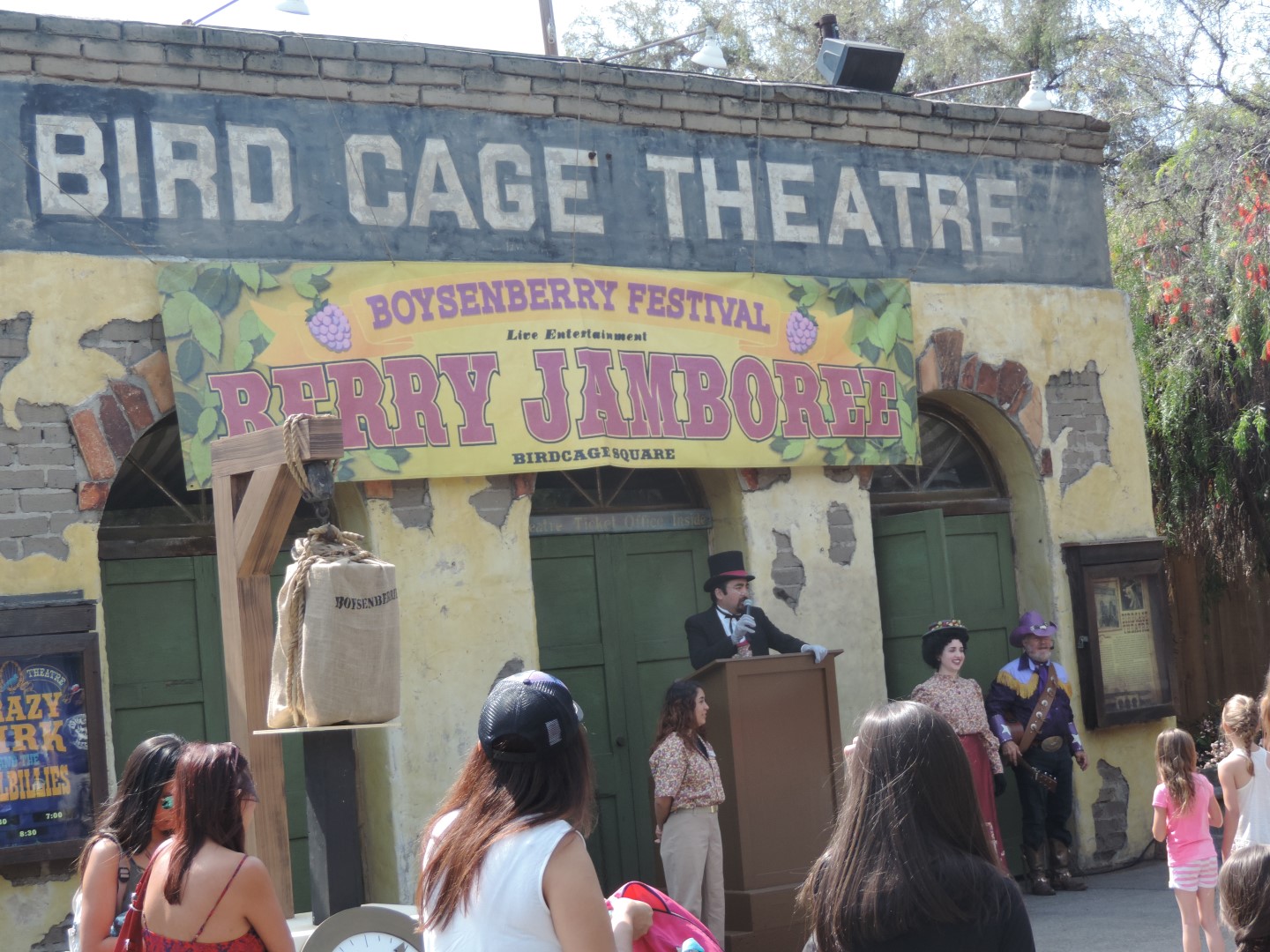 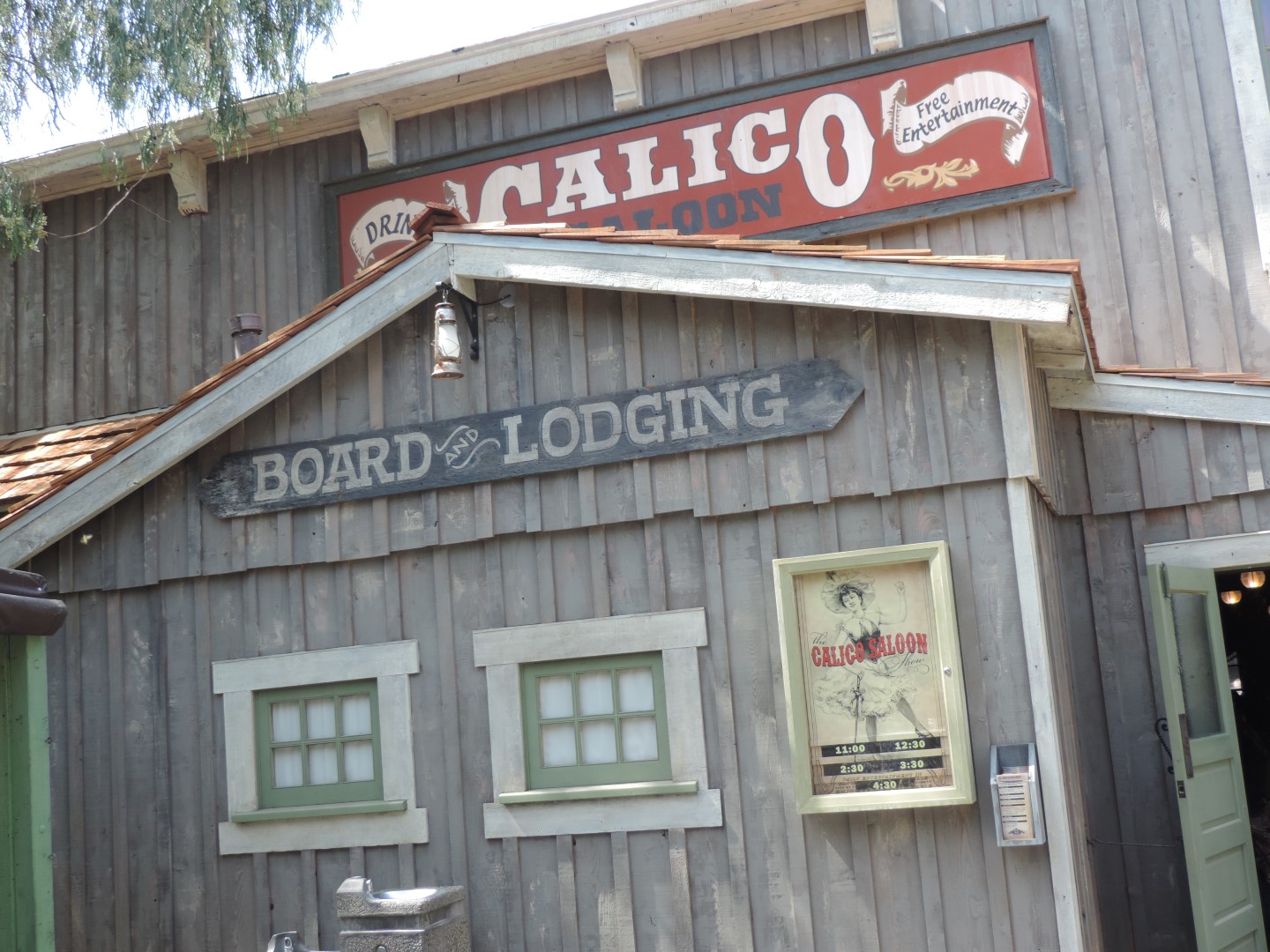 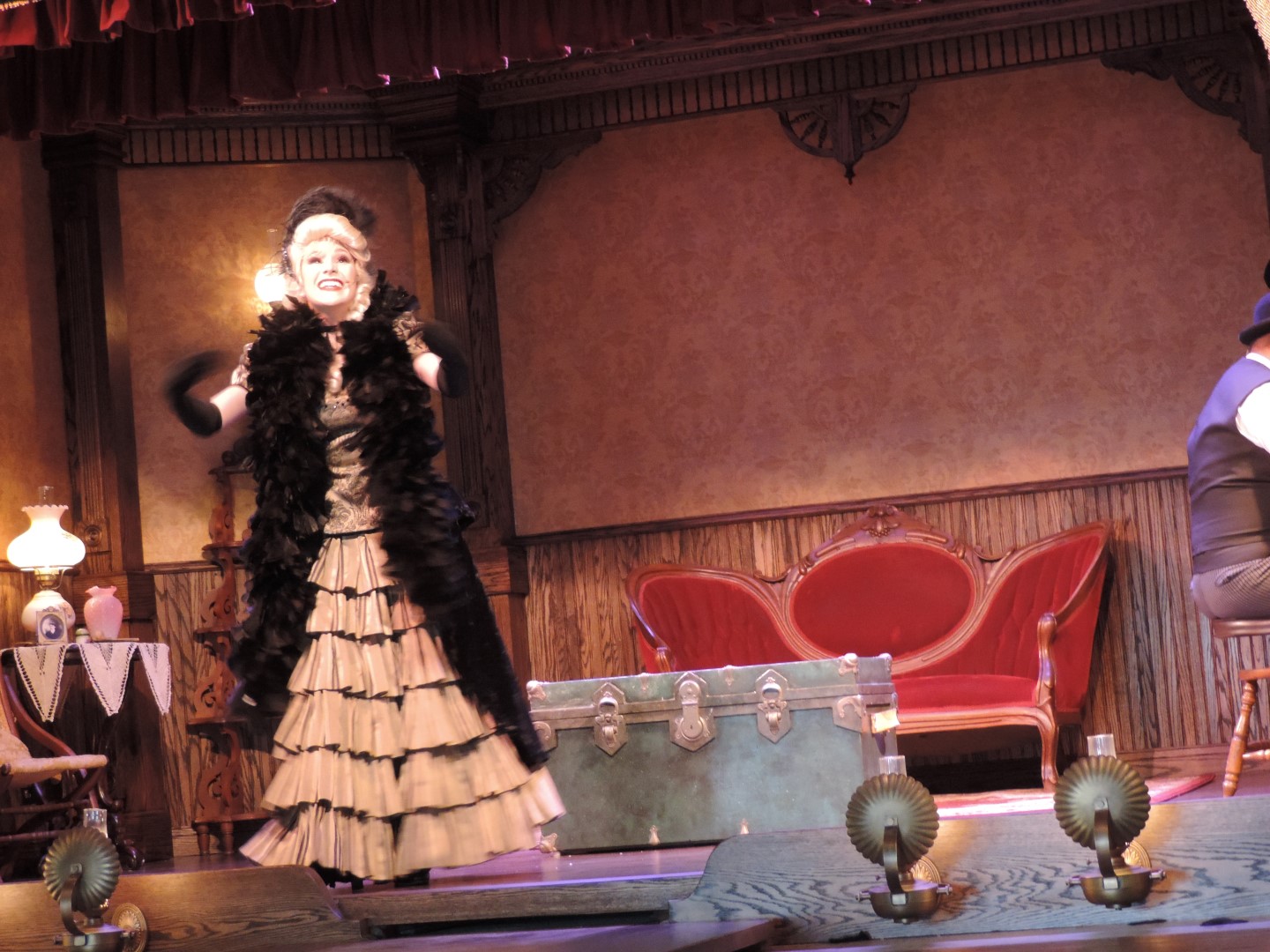 Then there’s also the Lucy’s Really Big Spring Show, located in Camp Snoopy, for the younger guests visiting the event! 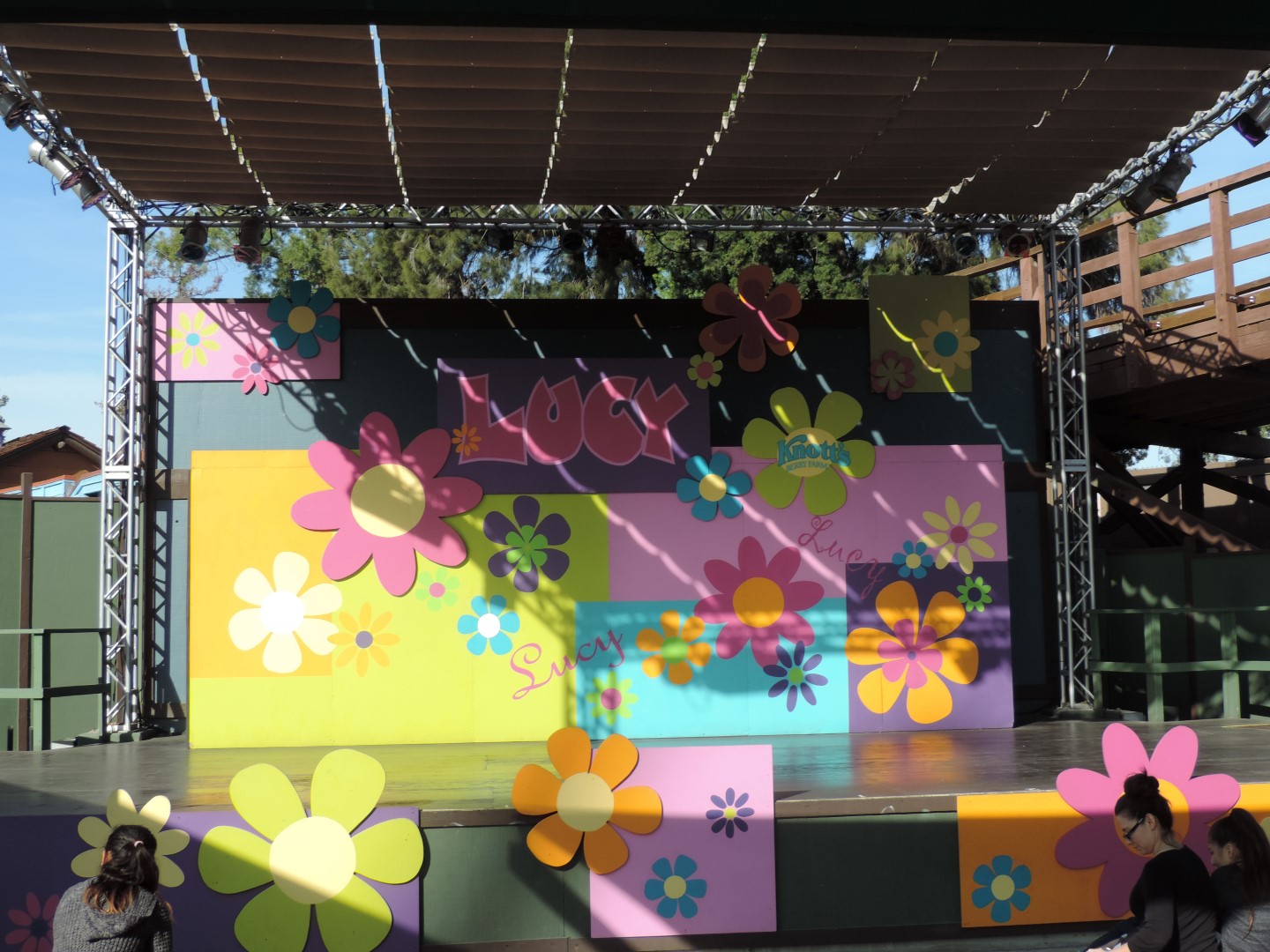 Our favorite family show though, is most definitely the Peanuts Party in the Park show at the fountain on the Boardwalk. The show is different than any other show as it pretty much separates the stage into three equal sections for a real 360′ degrees sort of show. 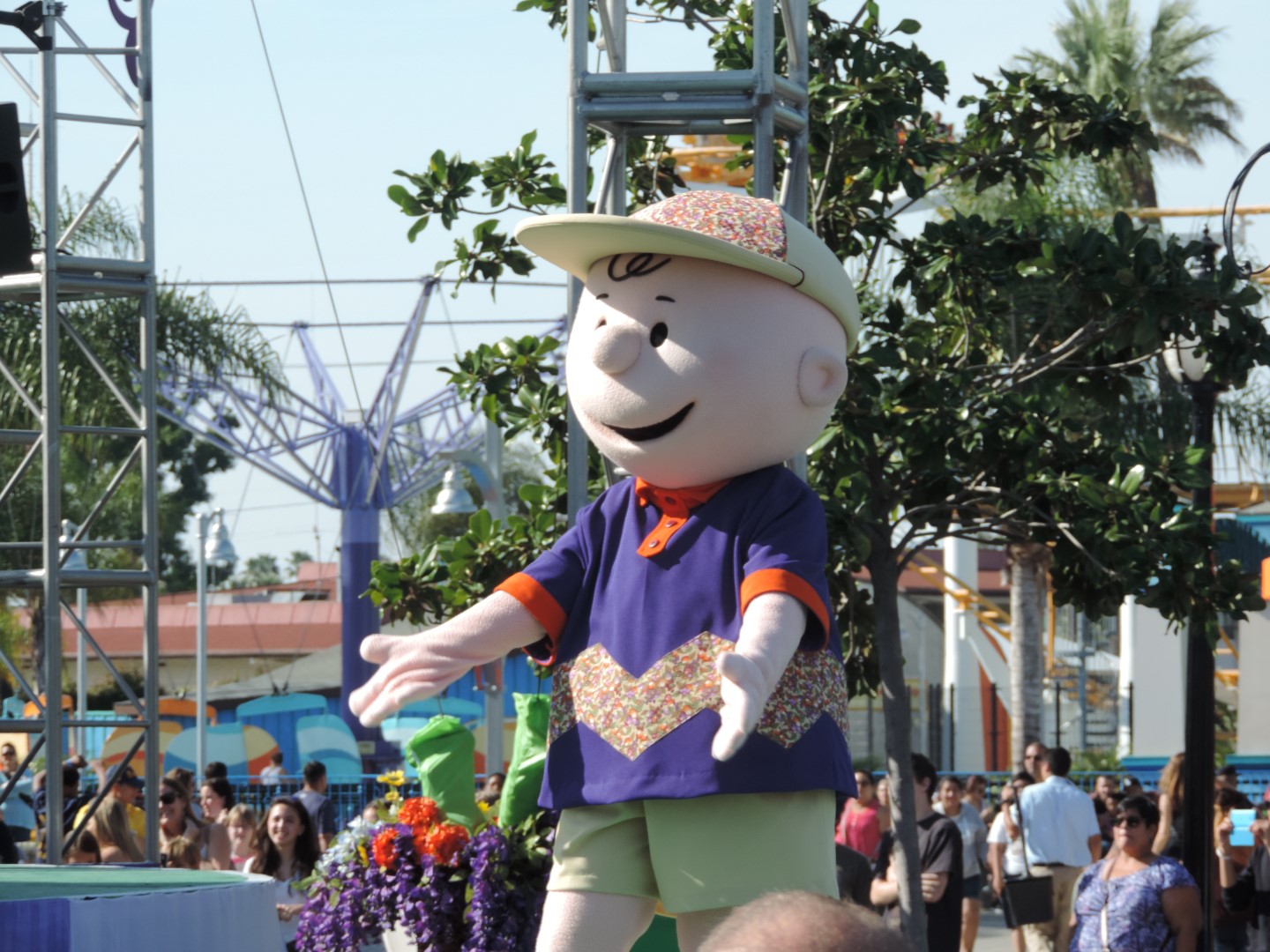 There’s live singing and lots of dancing. In addition to which the audience participation is key to the show, and kids play a pretty great role. It’s one of the more professional live shows regarding the peanuts. It’s a bit overdone almost, but families love it. 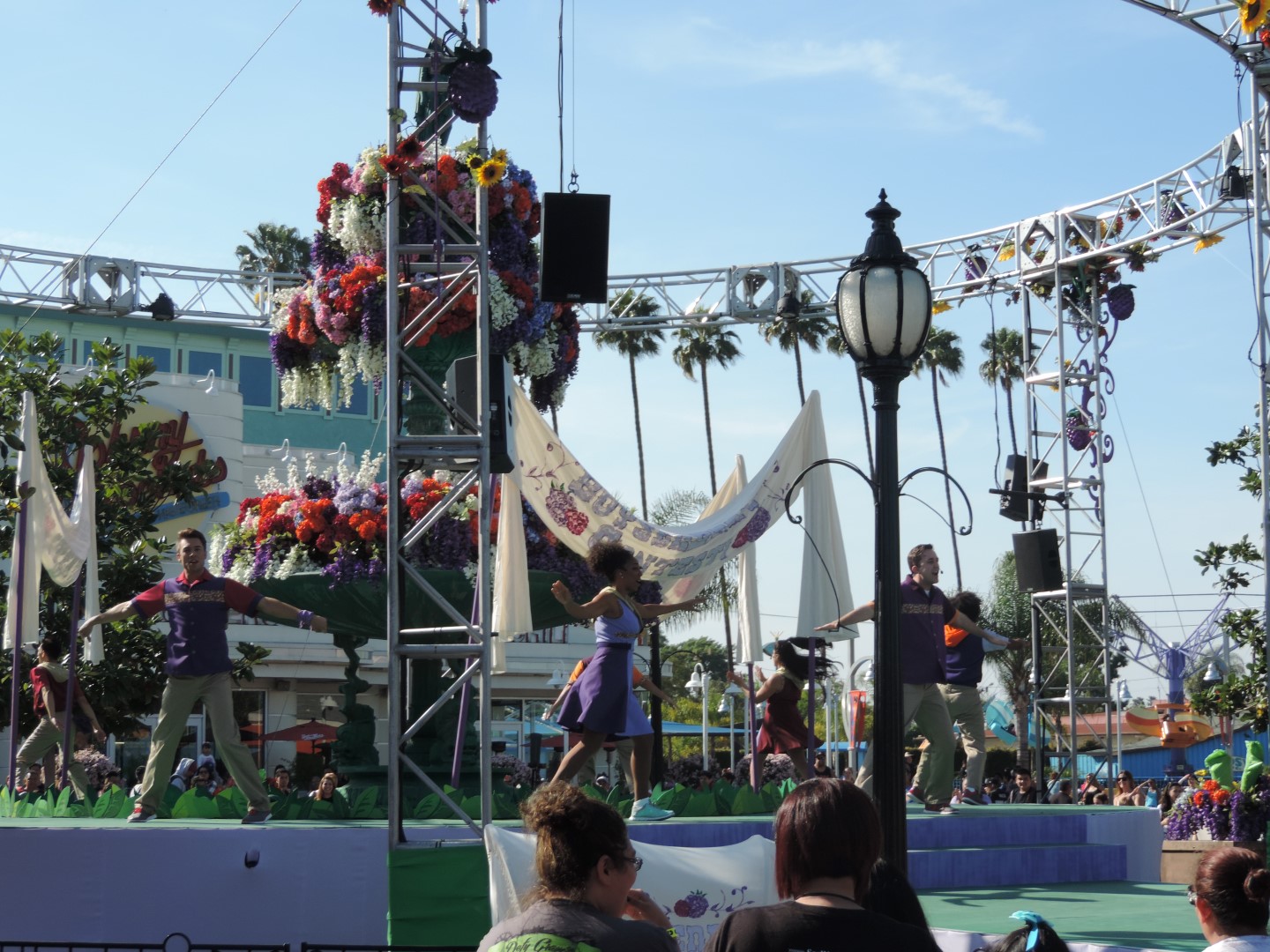 Let’s take another look around the event before heading to the World Boysenberry Pie Eating Championship. Here’s some more theming in Ghost Town. 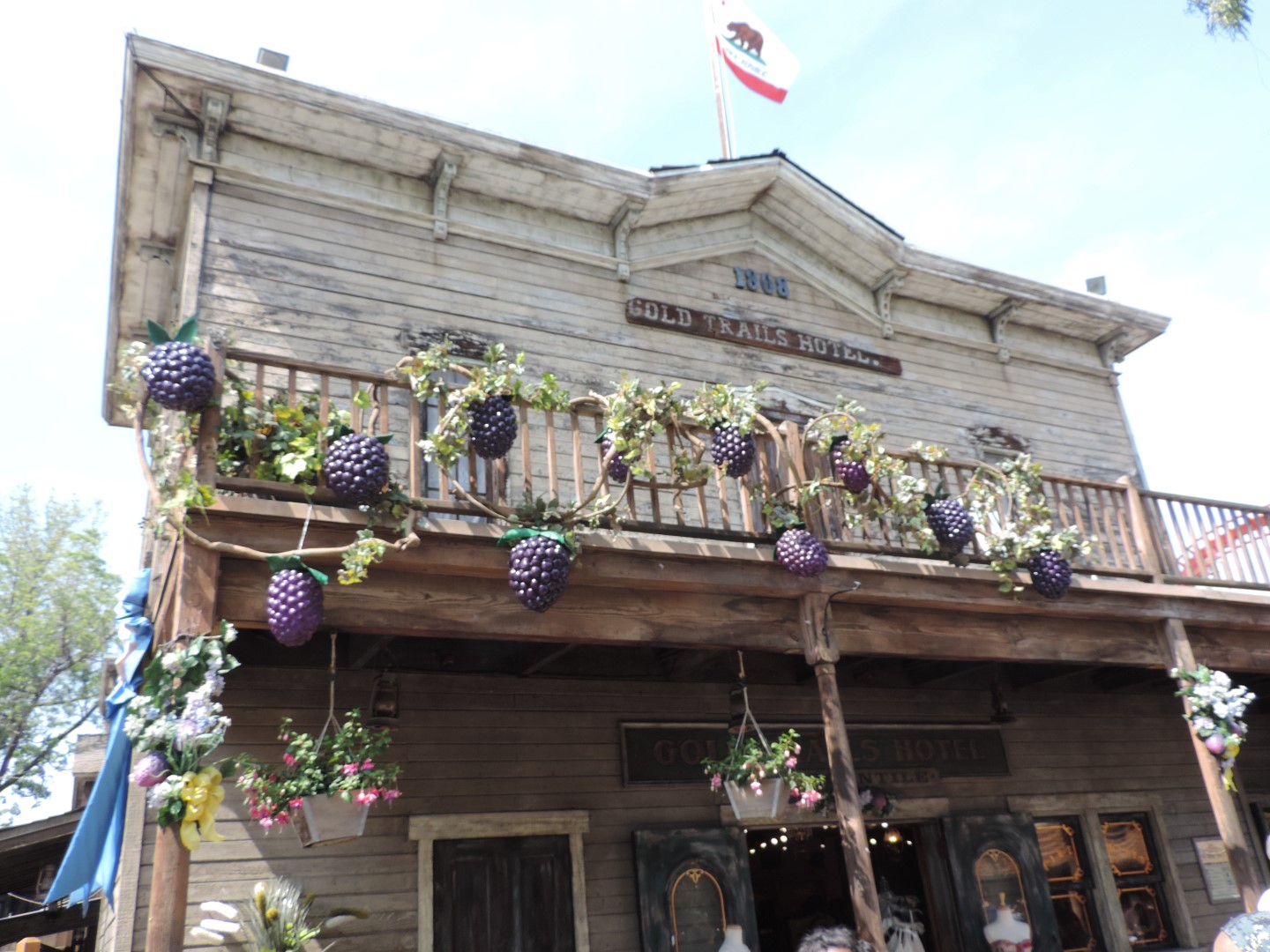 And the unique theming on the Boardwalk. Lots of colorful real, and not-so-real flowers. 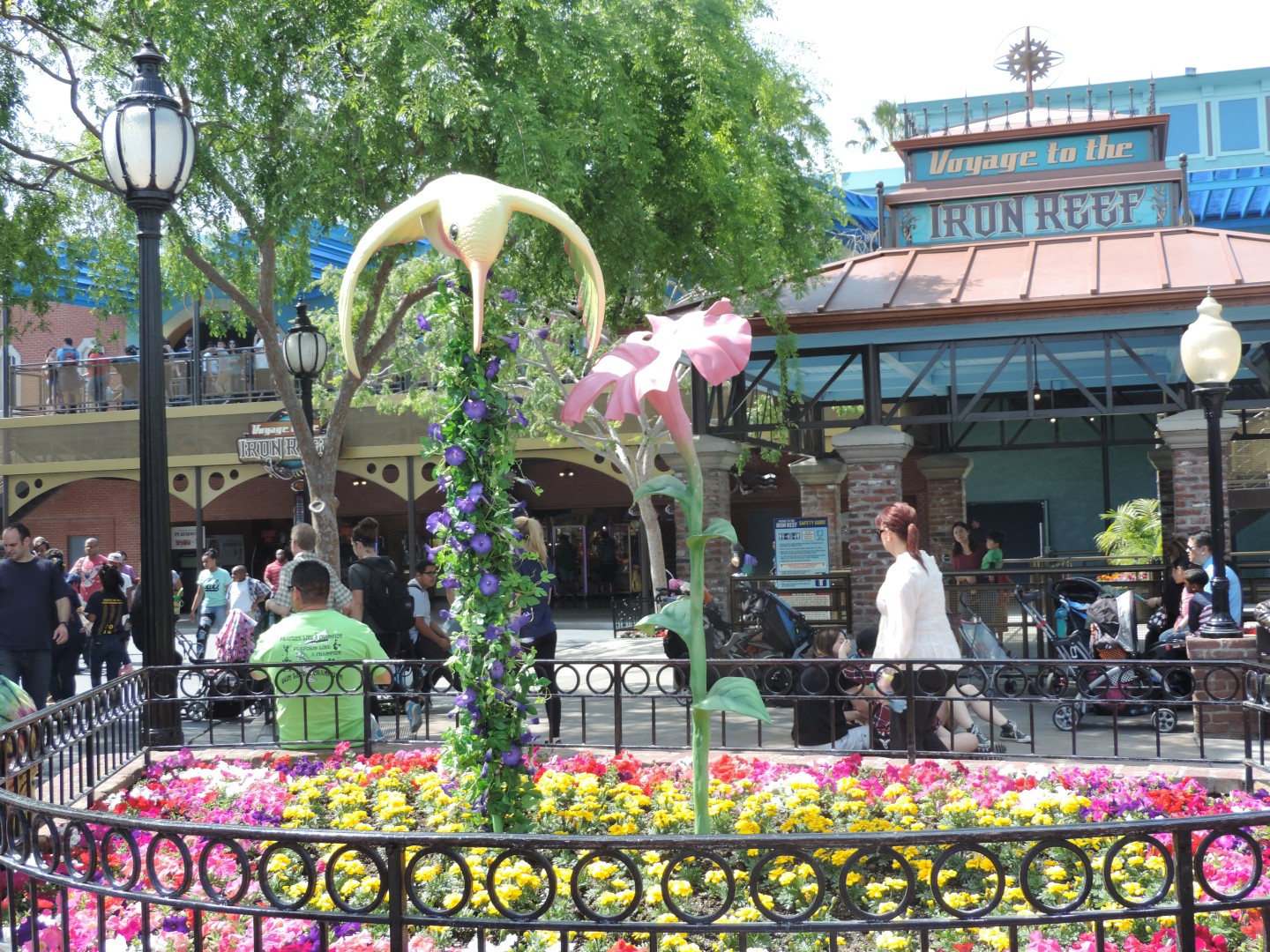 This event, much like Merry Farm, features many outside vendors that showcase and sell their handmade or exclusive items! It’s one of the unique aspects of Knott’s Berry Farm’s events. 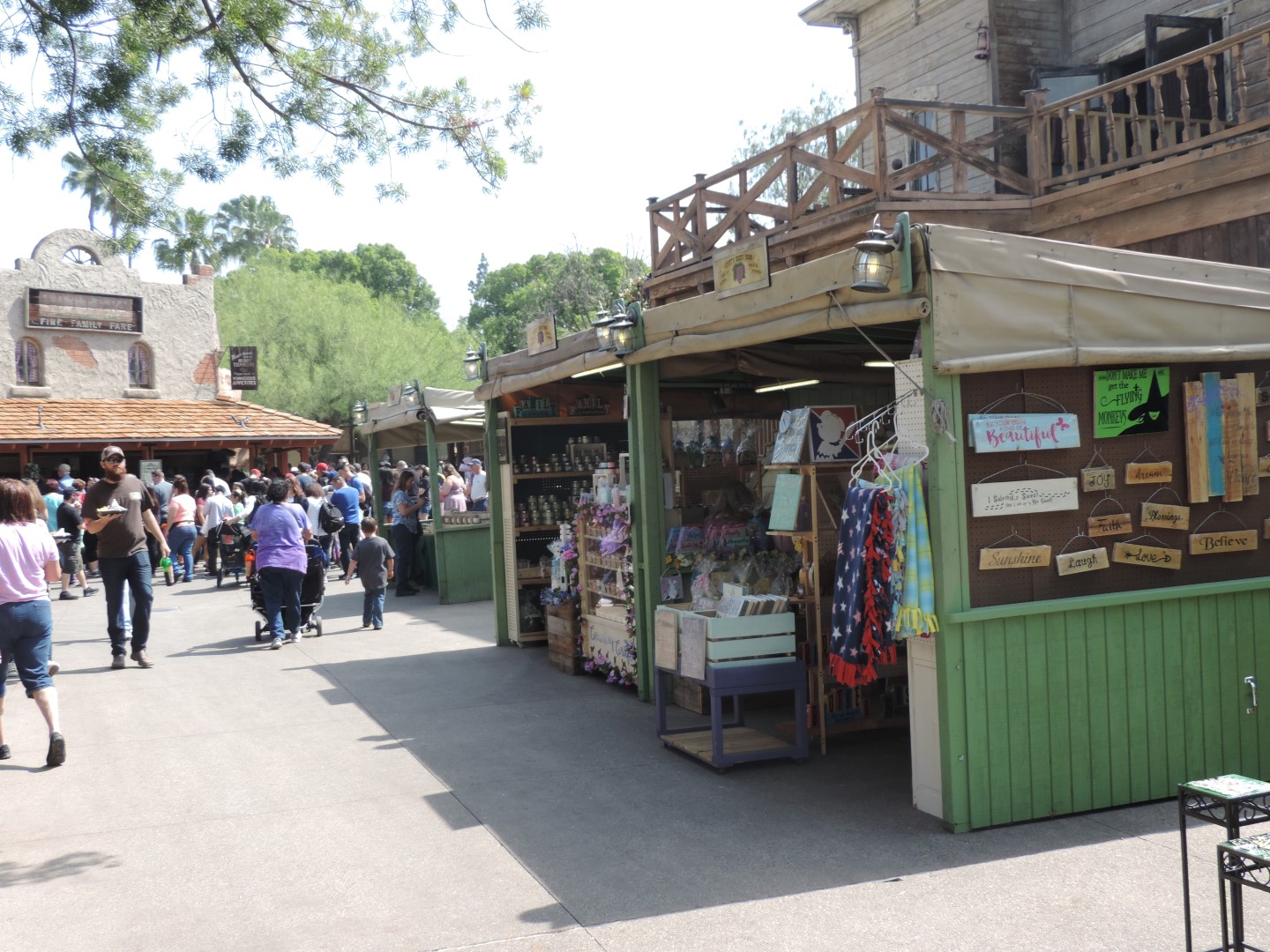 Let’s move on to one of the grand events of the day… the World Boysenberry Pie Eating Championship! Where people shoved pounds and pounds of delicious boysenberry pie into their mouths in a not-so-delicious way 😛 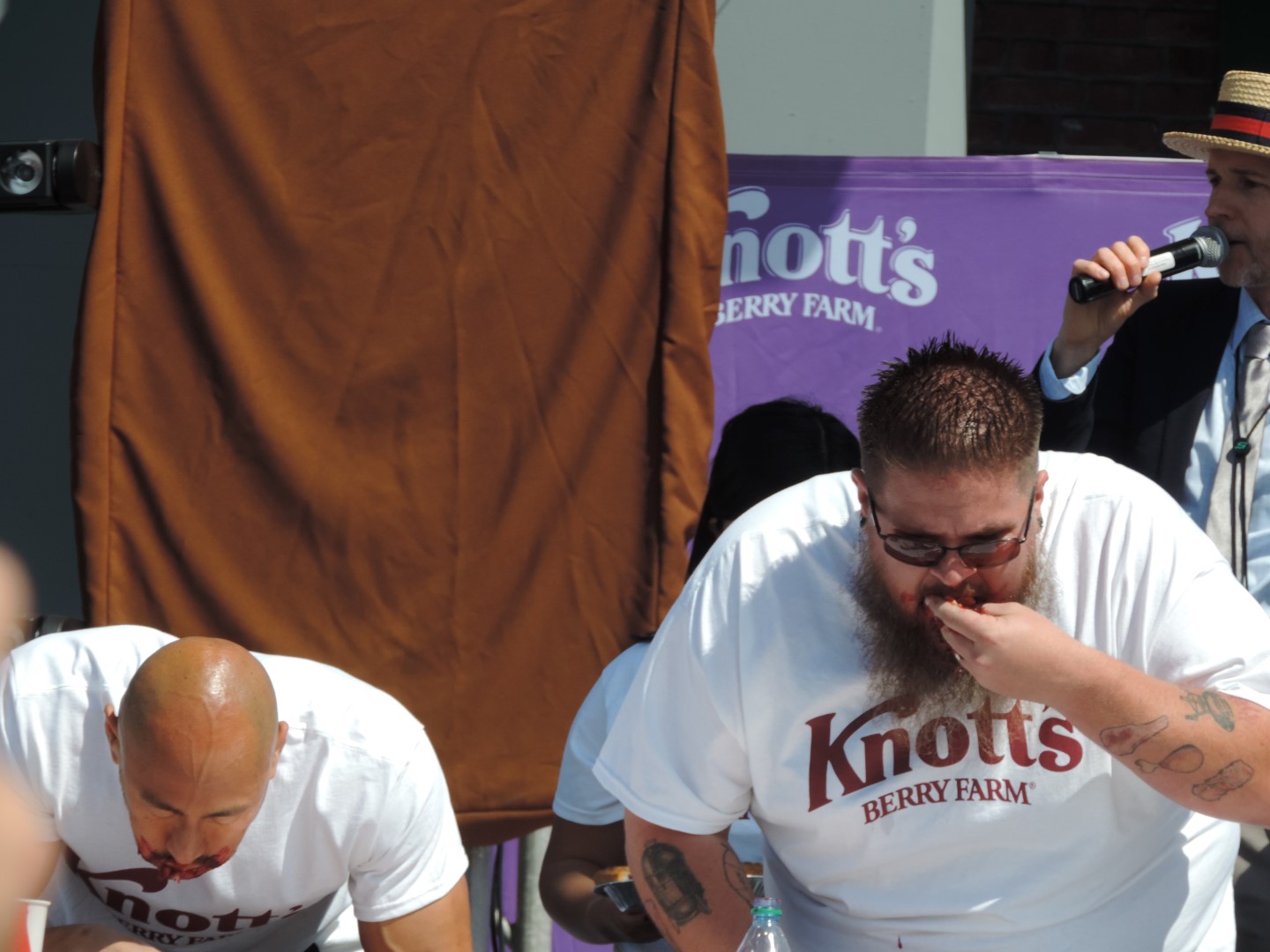 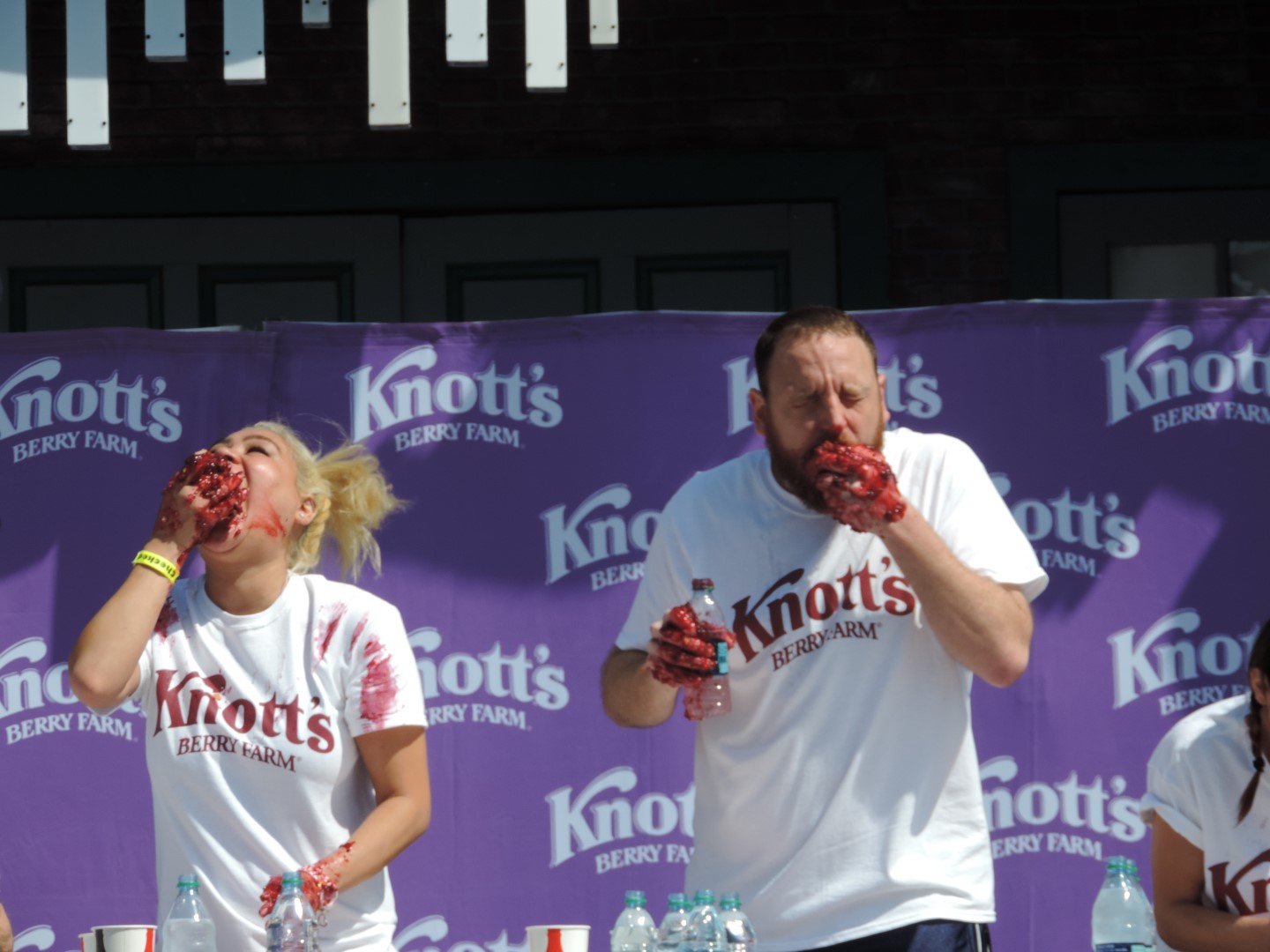 Contestants had 8 minutes to eat as much pie as they possibly could, using lots of water to wash it all down. It was both awesome, and unbelievable to see. I mean I love boysenberry pie, but by no means would I ever be able to eat anywhere as much or as quickly, as they do. 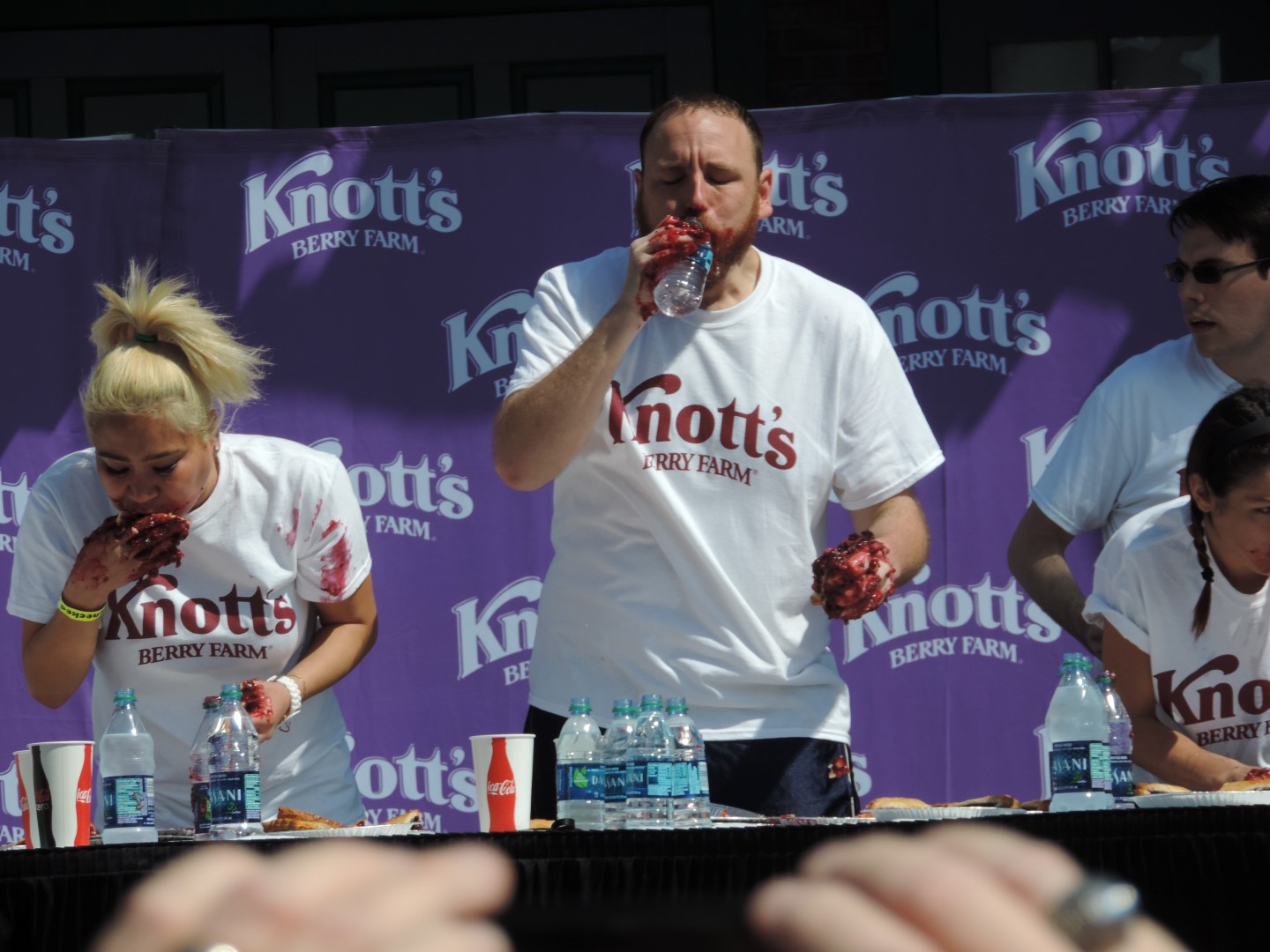 The winner of the World Boysenberry Pie Eating Championship was Joey Chestnut, who won last year, and set a new record by eating an insane amount of 14.5 pounds of pie. He did win a very cool trophy and $2000. 😛 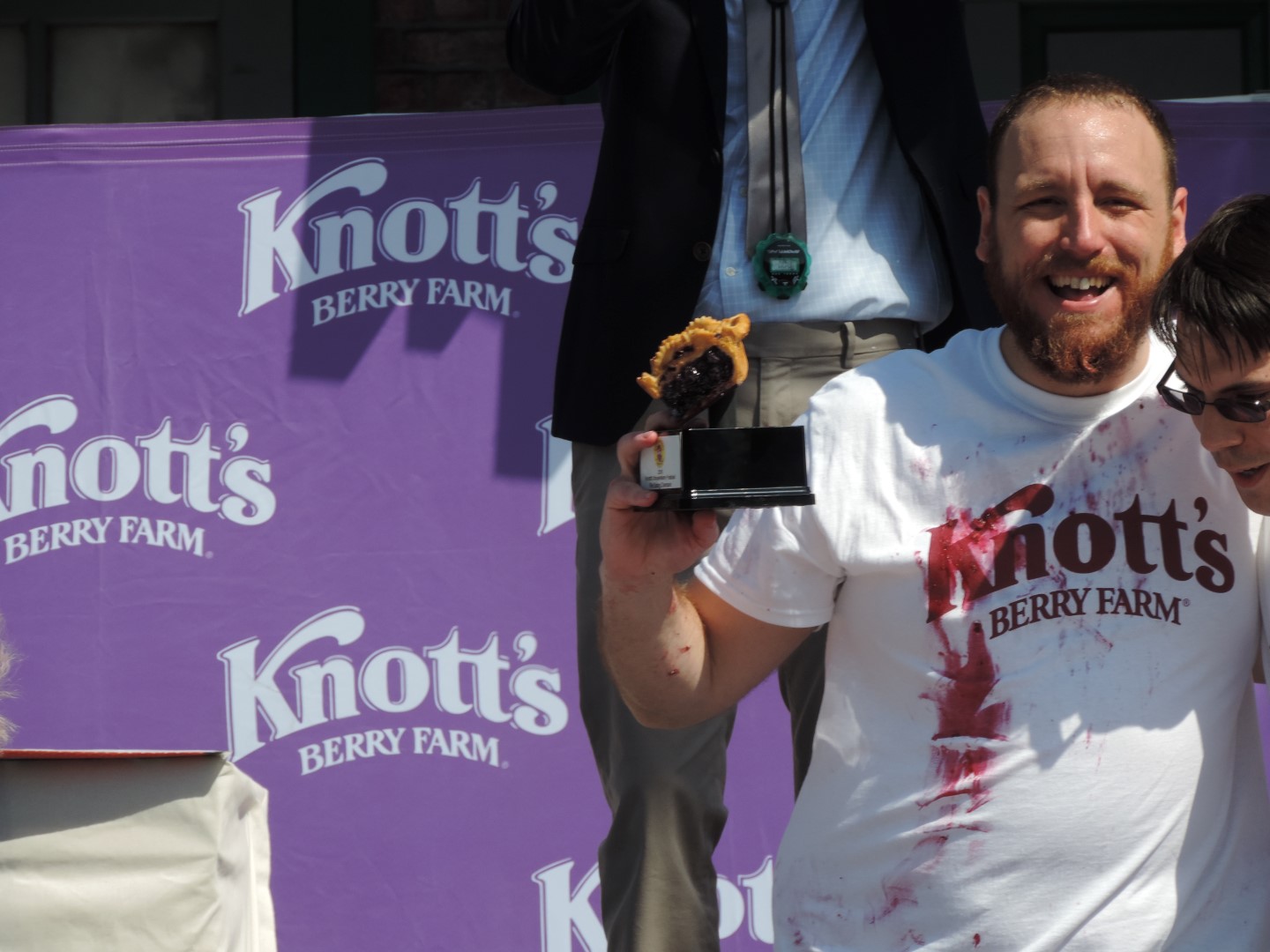 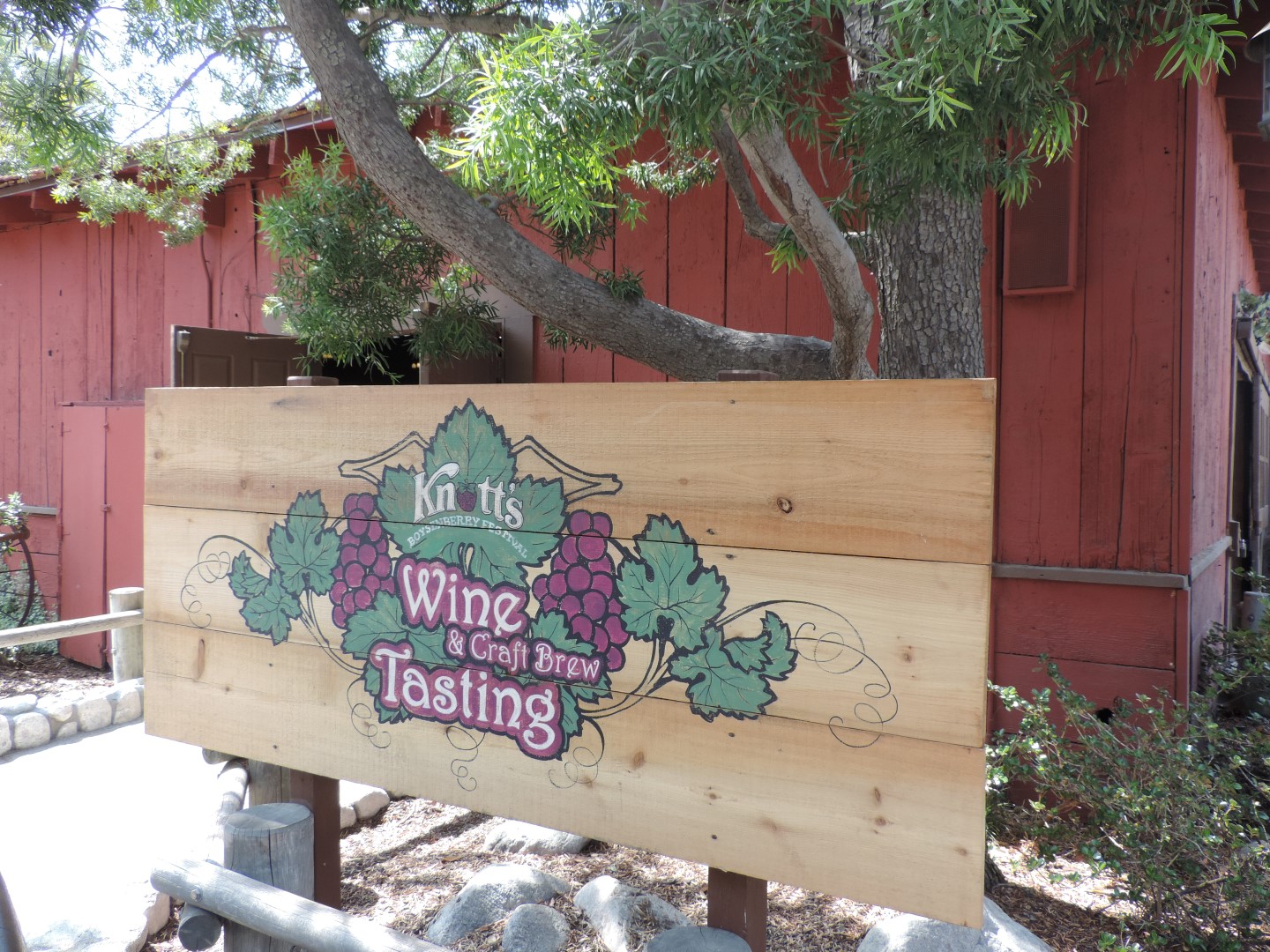 Which is a large scale… Wine and Craft Brew tasting. It takes place both inside and outside and there are lots of specialty and exclusive alcoholic beverages available to be tasted! 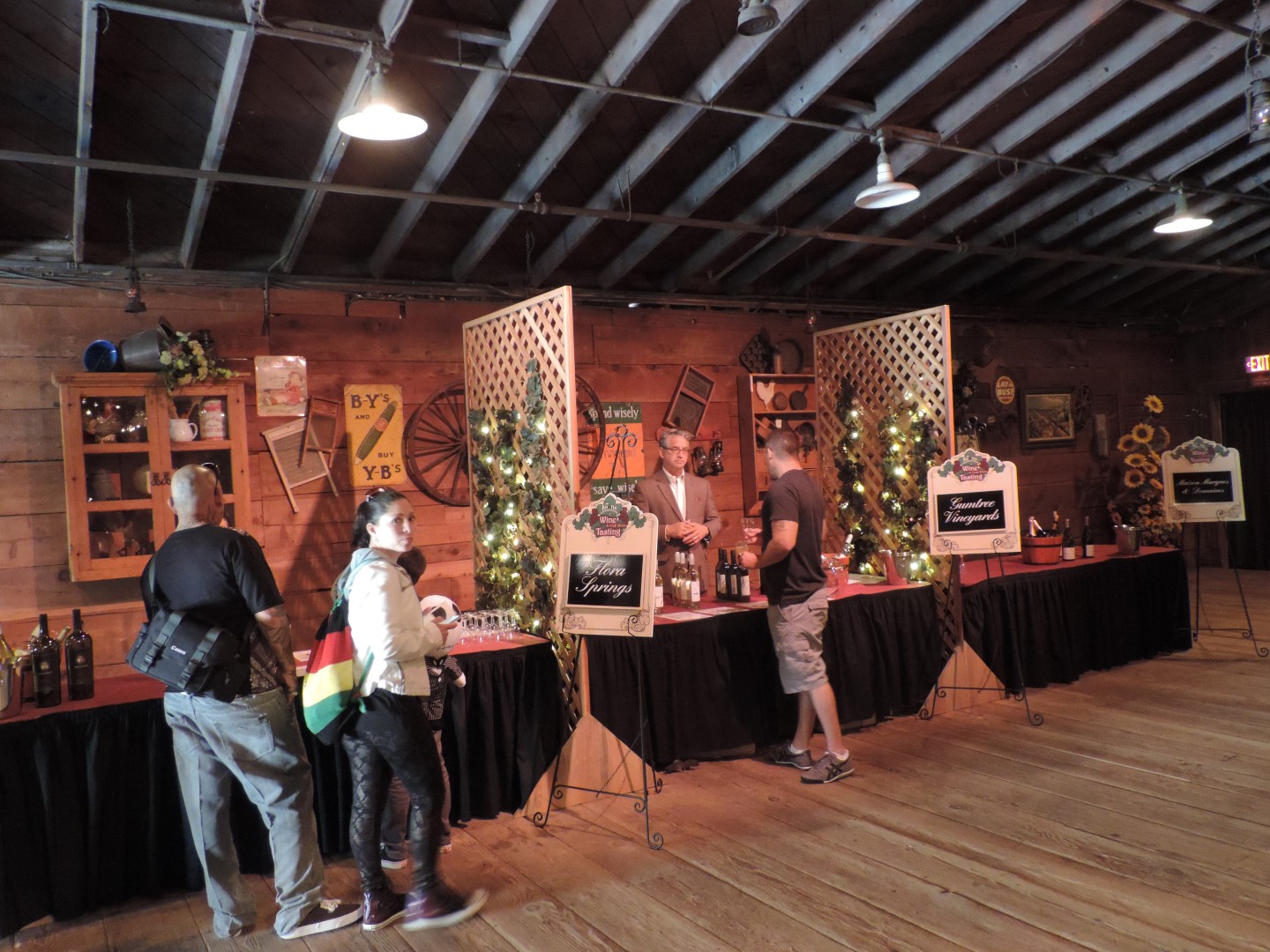 Though the real highlight of the event is the hundreds of boysenberry food items they have. Besides the crazy awesome Fun Bun and Fun Stick, they also sell a wide array of other foods. Such as boysenberry barbecue wings. 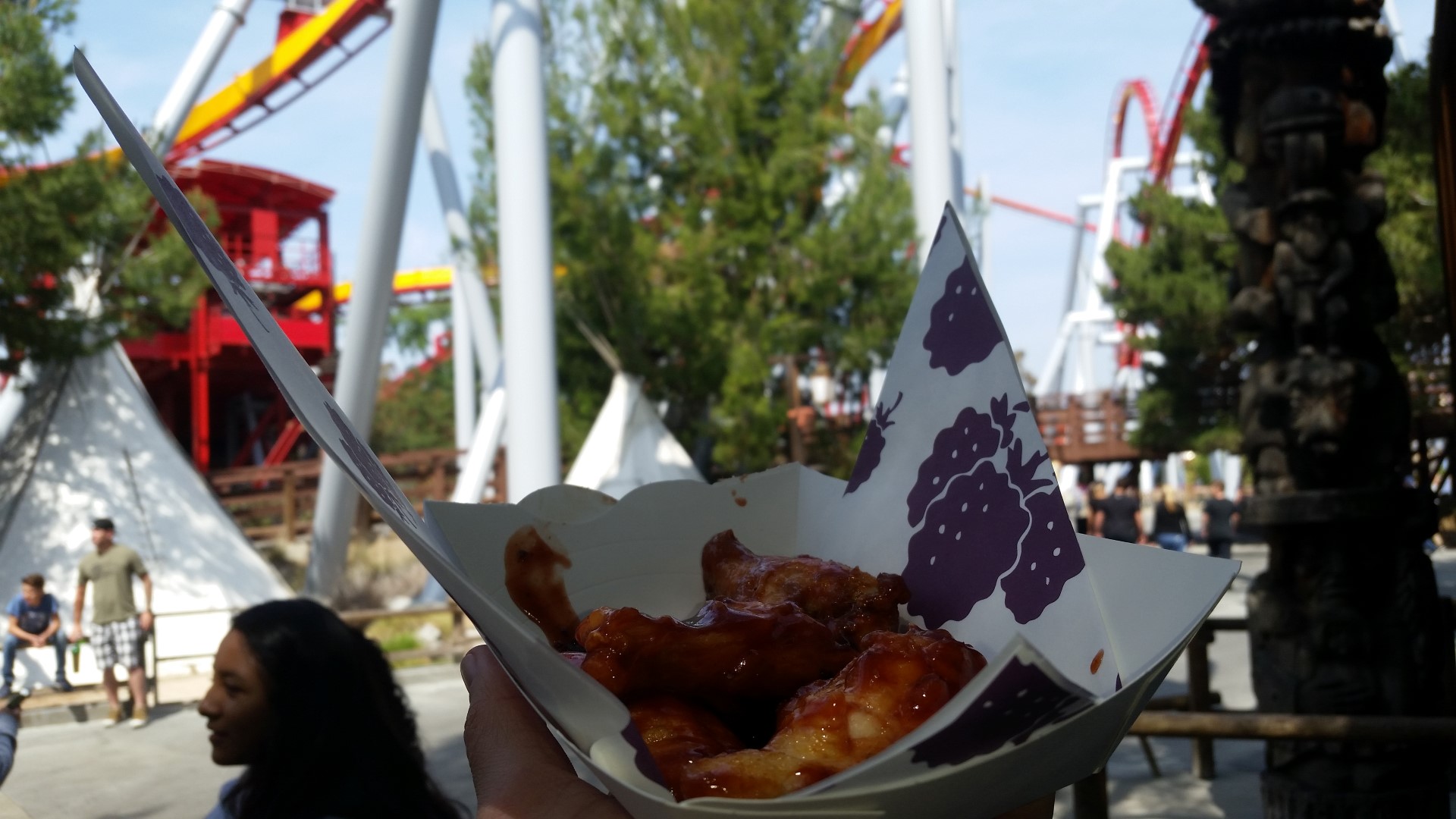 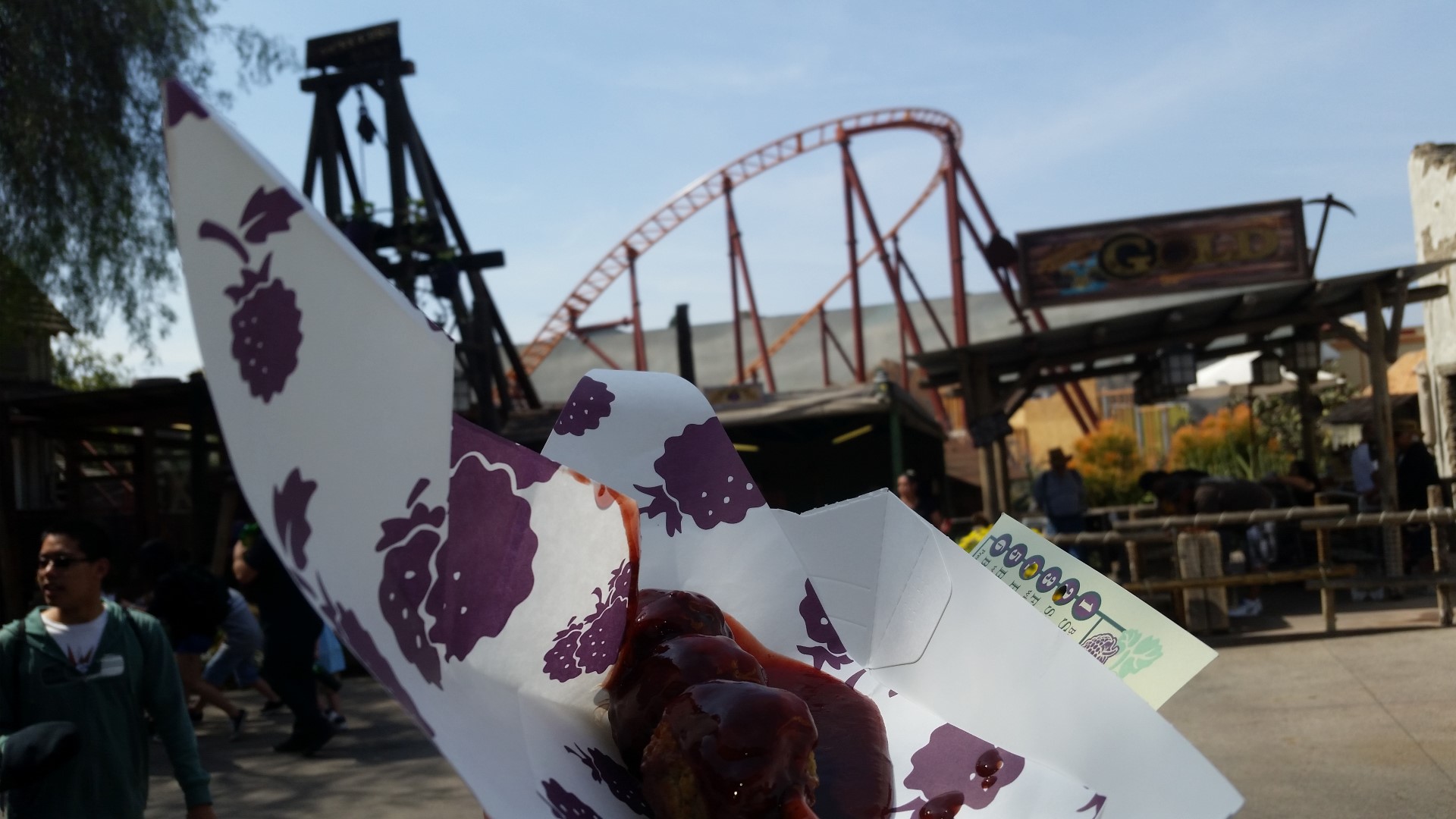 Let’s not forget that the event is in the Spring, and what better rides to ride in the hot SoCal Spring weather than… water rides such as the Timber Mountain Log Ride and Bigfoot Rapids! 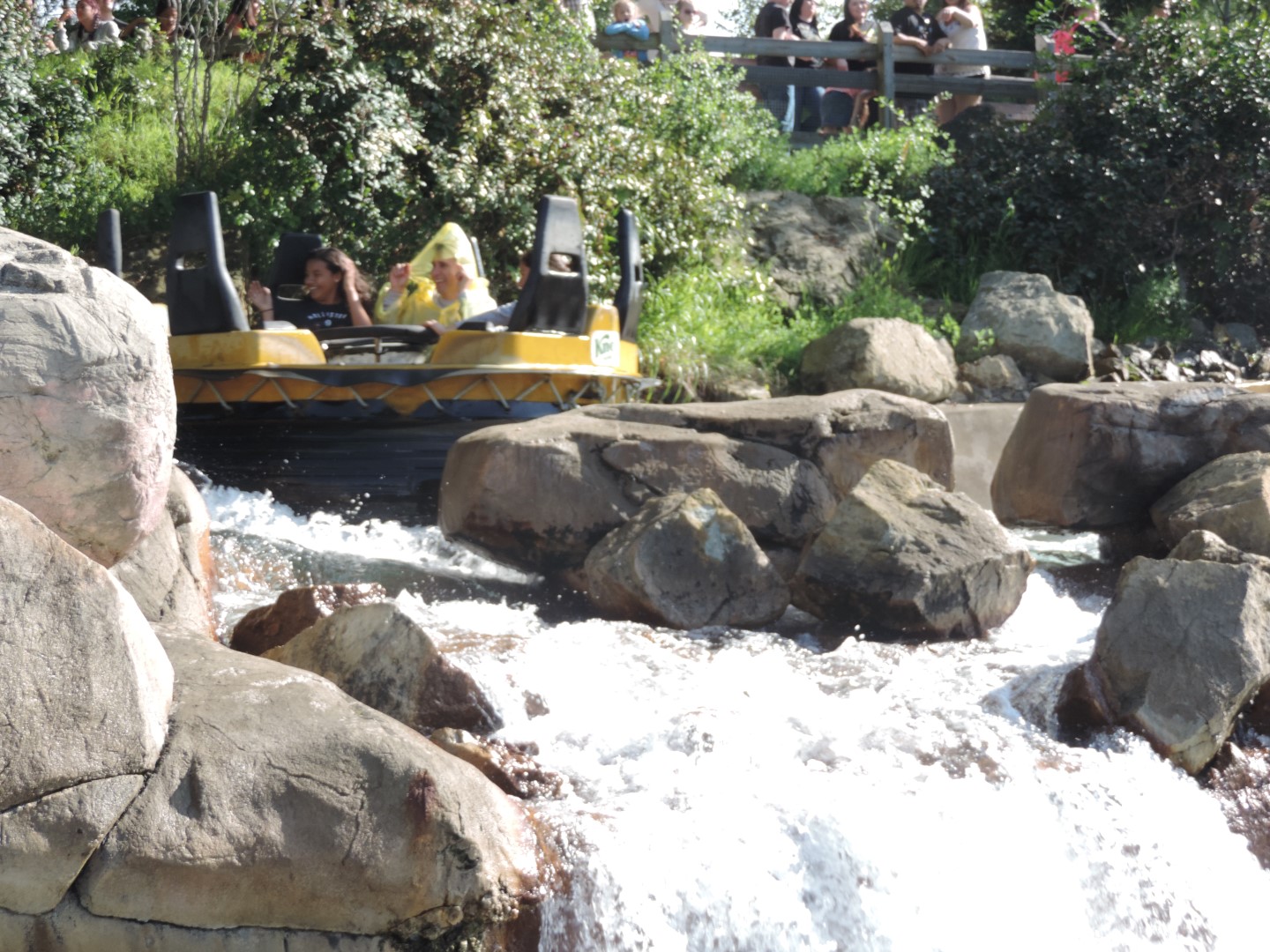 And of course while at the park for the event, you hop on their classic Calico Mine Ride and some thrill rides such as Supreme Scream in the background. 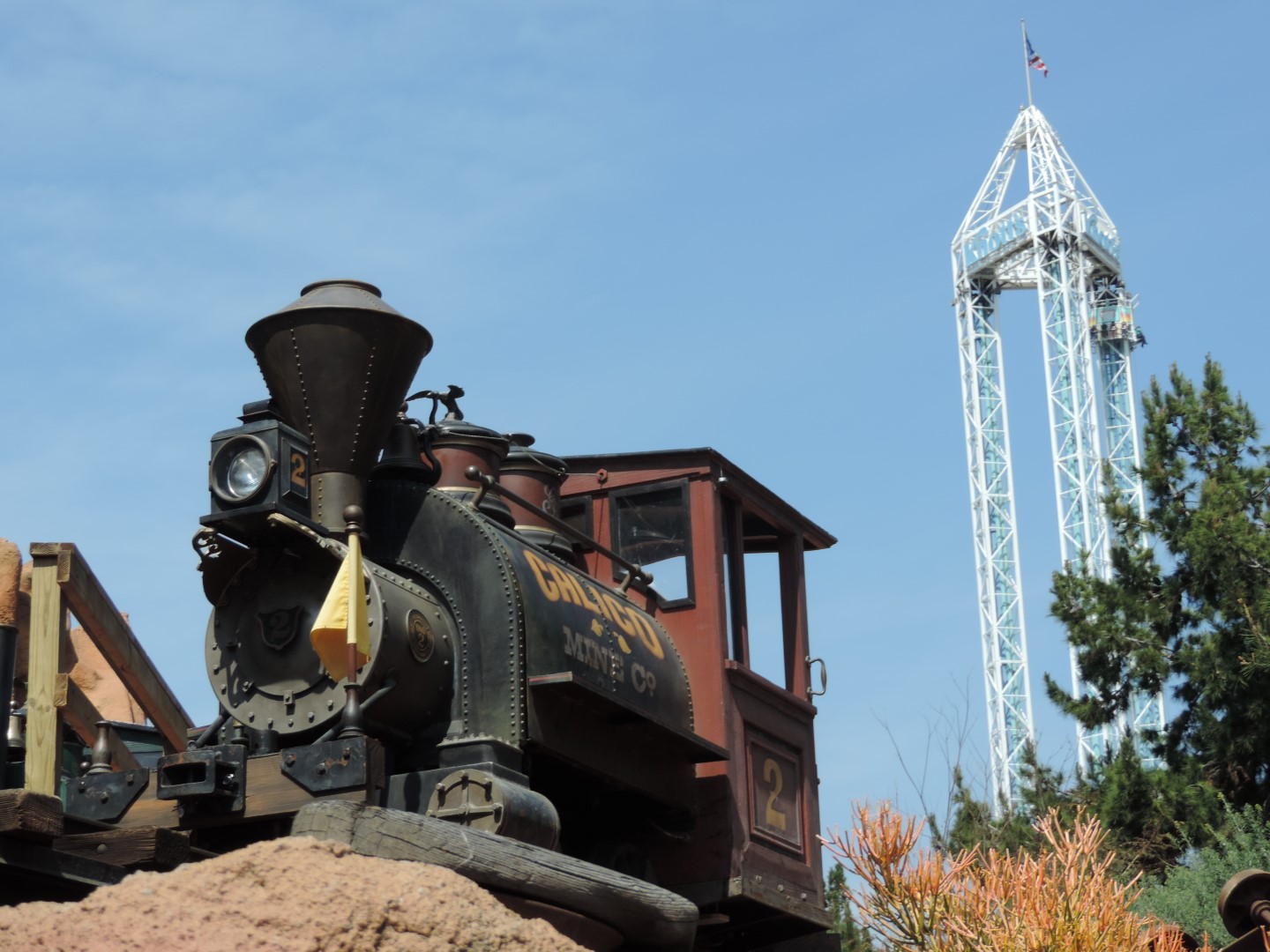 At night the event hosts Jammin’ in the Dark. Which has been moved to the Calico Stage this year with limited room in the old location due to construction. And I must say, they really created an awesome new version of the show. With a single DJ and a whole new light package, fog machines, and TV screens, this area came to life with an incredible atmosphere and was a lot of fun. Definitely make sure to check it out when you’re at the event at night! 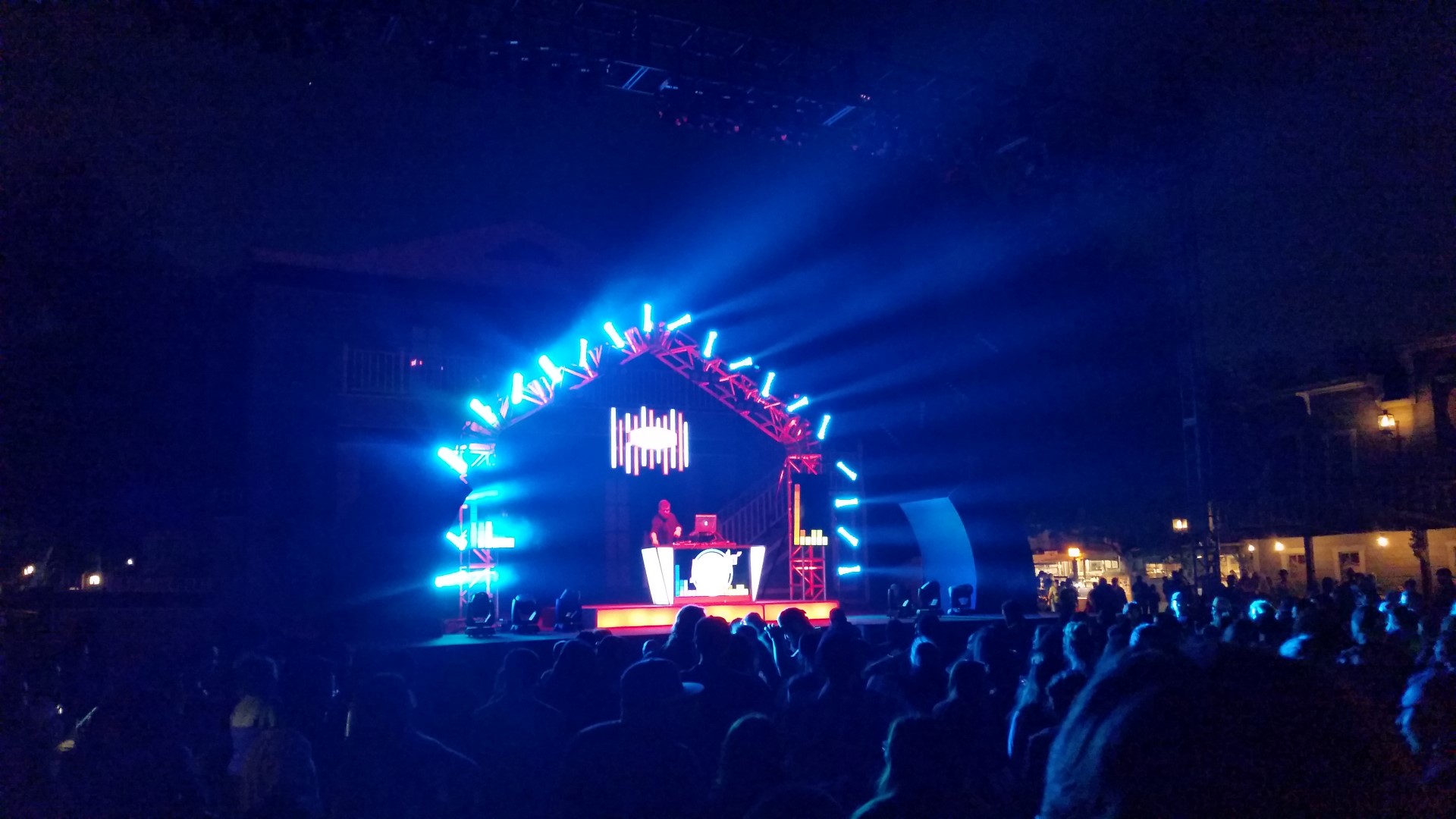 Last but not least… let’s finish with this shot of the Calico and Ghost Town Railroad passing by the light fest of Jammin’ in the Dark, with the steam that changes colors multiple times a second 😛 – To conclude, make sure to check out this event. It’s another one of those Knott’s events that literally only Knott’s Berry Farm can pull off. It’s unique, different, affordable, and fun for pretty much anyone as there’s a lot of food, high-end wine, lots of entertainment for each age group, and of course world-class rides all around the park. For a fun Spring atmosphere, you visit this event. Which runs daily through April 3rd! 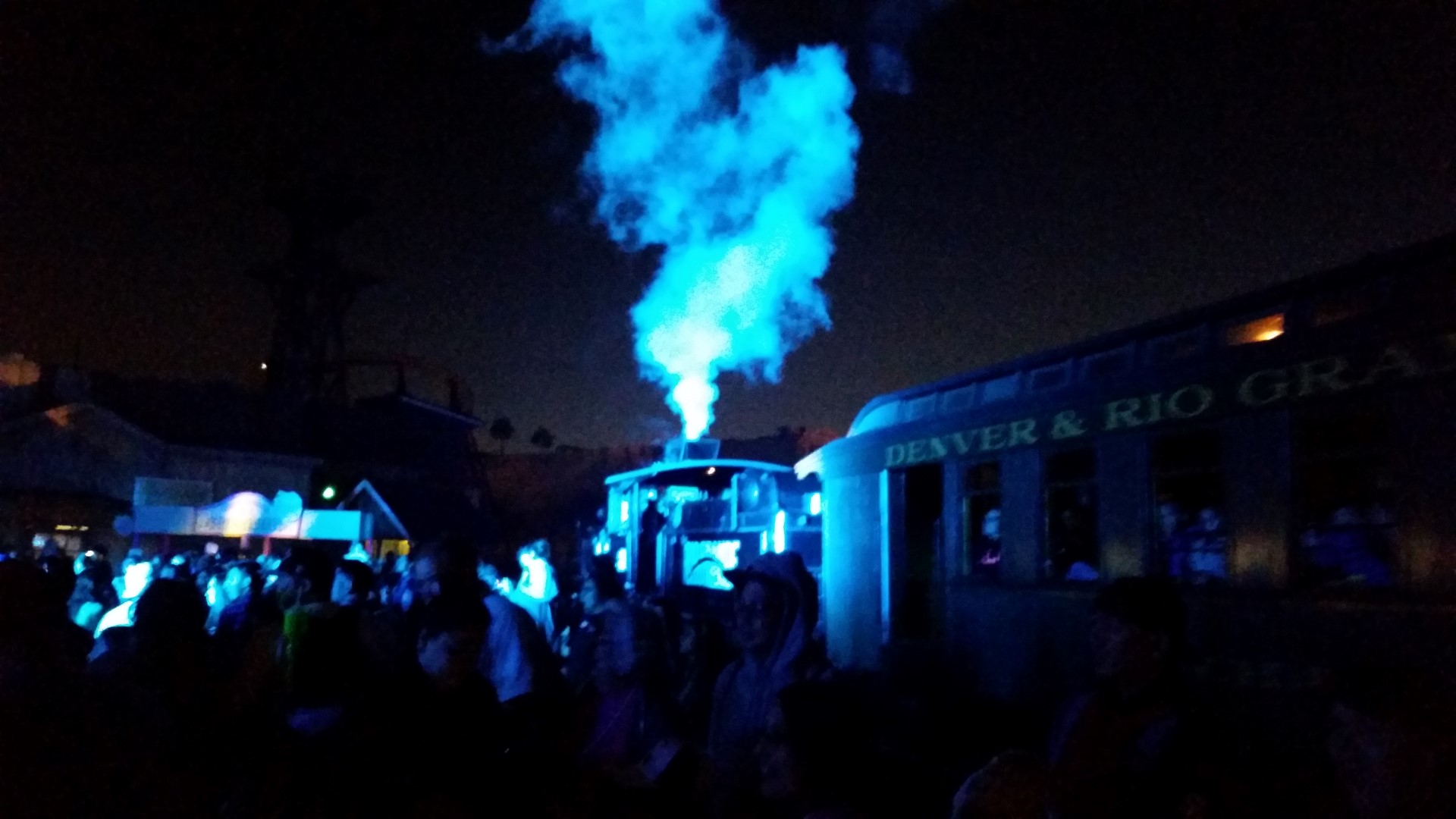 Thank you for checking out this Boysenberry Festival overview, it truly is a wonderful event! Make sure to check out the Knott’s Berry Farm Park Update from that day as well! Also check out: