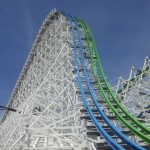 Twisted Colossus’ Media Day is tomorrow, the 20th, and then the ride officially opens to the public on Saturday May 23rd! A reader named Garett Simcox was at the commercial shoot the past two days, and he was excited to share his experience and thoughts with us. Follow him on twitter, under the name @TheCoasterRoll ! Below you’ll see his thoughts of the ride, this isn’t our review as we’ve yet have to ride it! We’ll soon publish our own full reviews of Twisted Colossus, the new area, on-ride/off-ride videos, and much more! So stay tuned for all that, after Media Day! Enjoy what Garett shared with us!

Memorial Day weekend is almost here, and with it comes a lot of anticipation. With the Opening of Wicked Cyclone on the east coast, and Twisted Colossus on the west coast, we have a lot to wonder about. Well lucky us! I was one of the lucky few to be picked for the Twisted Colossus commercial film shoot. After being sent through the ring 8 times, and over that drop 16 times, I have great news. We have one of the best coasters in the nation on our hands.

If I had to describe this coaster in one hyphenated word, it would be AIR-TIME. Remember the described 18 moments of air-time? Good luck keeping count while riding this monster. It never seems to let up. From the near vertical drop, you get thrown over a small air-time hill before being launched into that first diving turn. That, ladies and gentlemen, is where you get your most intense ejector air-time on the ride. From there you are thrown into the high five, and receive some wonderful floaters. Can you guess which side had the better high five? Of course it’s the green! I’ve never been so delicately thrown around like a rag doll like I was on the green track. You cant help but throw your hands up through the high five. How could you not?! It’s the only high five element in the Western Hemisphere. Not to mention that there are NO handlebars to grab onto on this ride.

I was slightly disappointed by the amount of times we actually met up with the other train. Out of my 4 dueling rides, we maybe got 2 close calls and 1 perfect match. Not so good considering that we were pre boarded and waiting for the perfect moment. That 90 second load time seems to go quick. We were running to our seats for the practice runs. It was still hectic and rushed. If you got one handicapped person that required assistance, or even a recheck on the seats, the whole thing would be thrown off. I hope they can get it right because dueling with the other train was magical. You really focus on that other train when it’s right there with you. Maybe with practice, and the use of the 2 brake runs before the lift hills, we will see some success.

Speaking of magical, those two inversions…I mean, come on were on an ex-wooden coaster here! You first go through the blue track. This has a wonderfully paired bunny hop that matches the green’s Top Gun Stall. This is like a second high five element , net be damned! Its just too cool to see the other train twisting above and below you. The Zero G on the blue track is like butter, but the Top Gun stall is the most mind blowing element on the ride. There is so much hang time, yet you just float right through it. Its like a Zero G inversion on crack, and it lasts forever!

After exiting the inversions, both trains enter the double ups for some fun pops of air-time. The blue track heads around an outward banked turn, which surprisingly was not as powerful as I thought it would be. I will however say, that being on the lift hill with another train full of people, was so fun. People were throwing imaginary lassos and fishing lines. We were fake paddling and swimming up the hill, trying so desperately to catch up. It never seemed like we were racing, but rather, going on an adventure with each other. Almost as if the green track was leading the way with its knowledge of what was ahead.

Over all, the ride is fantastic. With all the head choppers and sharp transitions, it’ll keep you guessing. It is so velvety smooth in everything it does, yet it still seems so angry and volatile. Ride it in the front for serious ejector air-time. Ride it in the back and you’ll float over every hill. No matter what, you will be surprised by every part of this ride. I’m happy to say that California has a proper Air Time Monster on its hands. Twisted Colossus is a fabulous addition to Six Flags Magic Mountain as well as a wonderful homage to the park’s past. Don’t forget about that sweet Early Ride Time gold pass holders! May 21 and 22. Thanks for reading, now go get out there and have some fun!

Thank you, Garett for sharing your thoughts with our readers! Stay tuned for a wide variety of California Coaster Kings coverage of Cali’s hottest new ride, soon! For all the details of ERT for Regular Pass Holders, as well as Gold Pass Holders, please click here!

5 Replies to “Twisted Colossus Pre-Opening Thoughts of a Rider!”