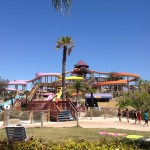 Raging Waters San Jose is one of the lesser talked about water parks in California by enthusiasts,  but we believe it’s uniqueness and terrain give the park some rarely received merit. The park also has a decent collection of slides and attractions highlighted by Bombs Away, the first trap door slide on the west coast, and Sidewinder, a racing mat slide new for 2015. The park also has friendly employees and a fun atmosphere so we would really like to talk about it, and we are very excited to announce the start of our coverage of Raging Waters San Jose! We will separate this article into a general overview of the park, and then a park update which will be clearly stated. Without further ado, let’s get started!

The first slide complex you will see once having entered the park is the appropriately named Serpentine Slides. It consists of three one person tube slides, yellow, pink,  and orange. These slides are actually built on top of a pretty large hill and like most of the parks collection, integrate the terrain quite well. 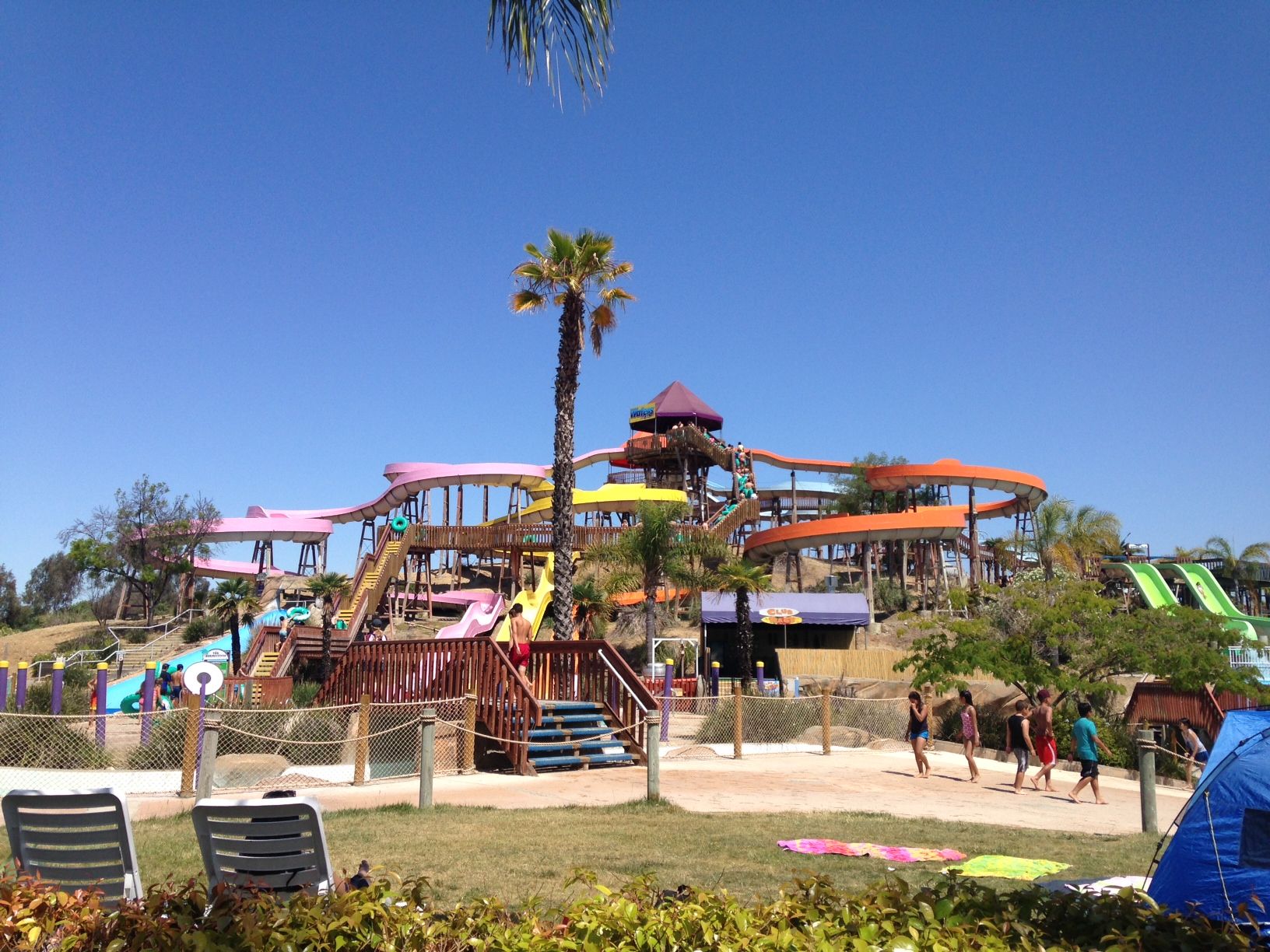 They are all pretty similar In ride experience and are fun family friendly slides with some good speed towards the end. The turns up top provide some decent banking as well as good perception of height, and the finale often consists of riders  flipping over their rafts while entering the pool below. Overall, they are fun slides but nothing to write home about. We suggest you avoid yellow and opt for the other two if you are looking for the most thrilling experience. 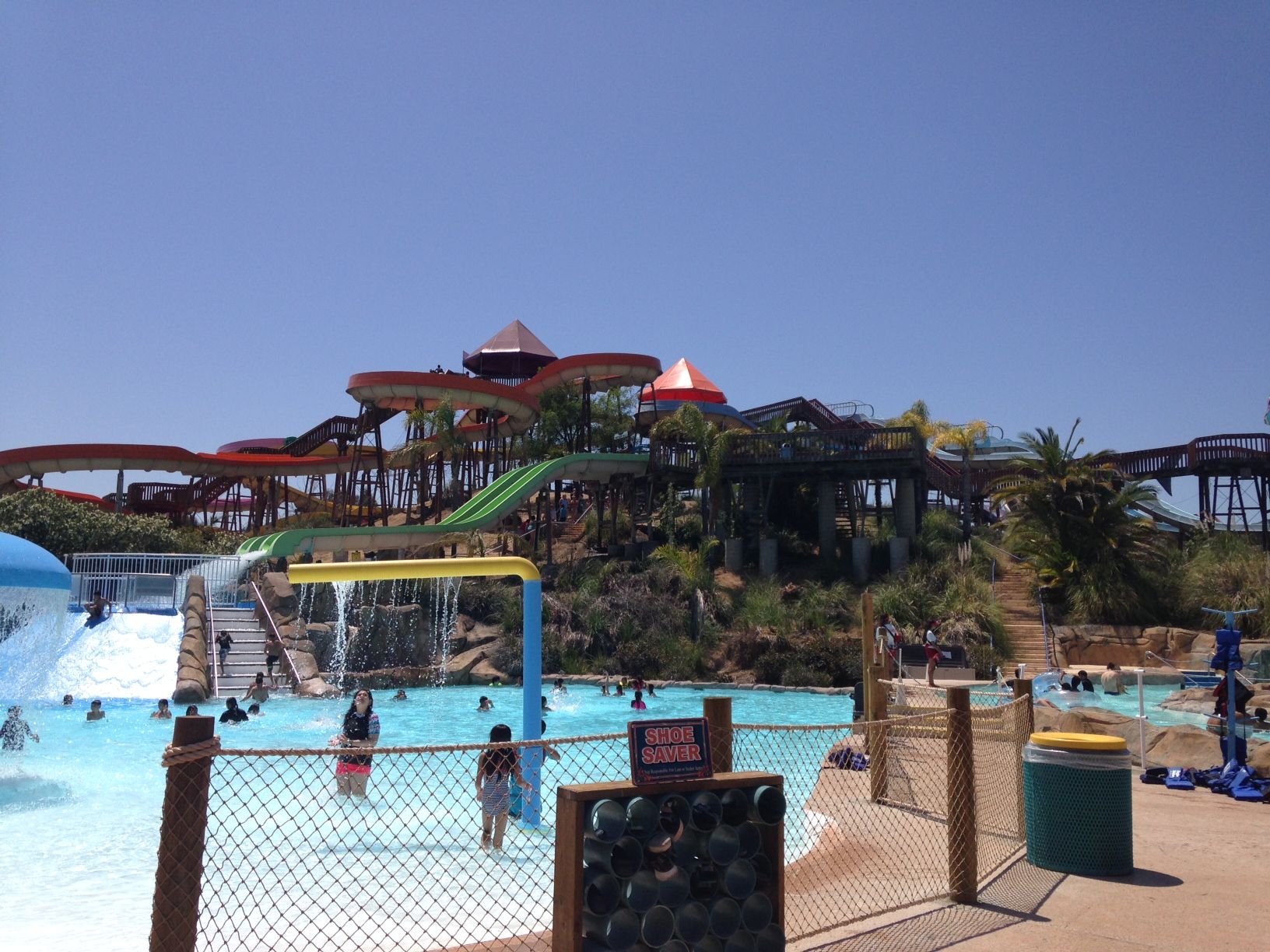 There is a smaller slide type ride directly adjacent to Serpentine Slides called Slide Creek Falls which is essentially just a shallow blue ramp into a pool below that is ridden in an tube. Younger kids really seem to enjoy it. 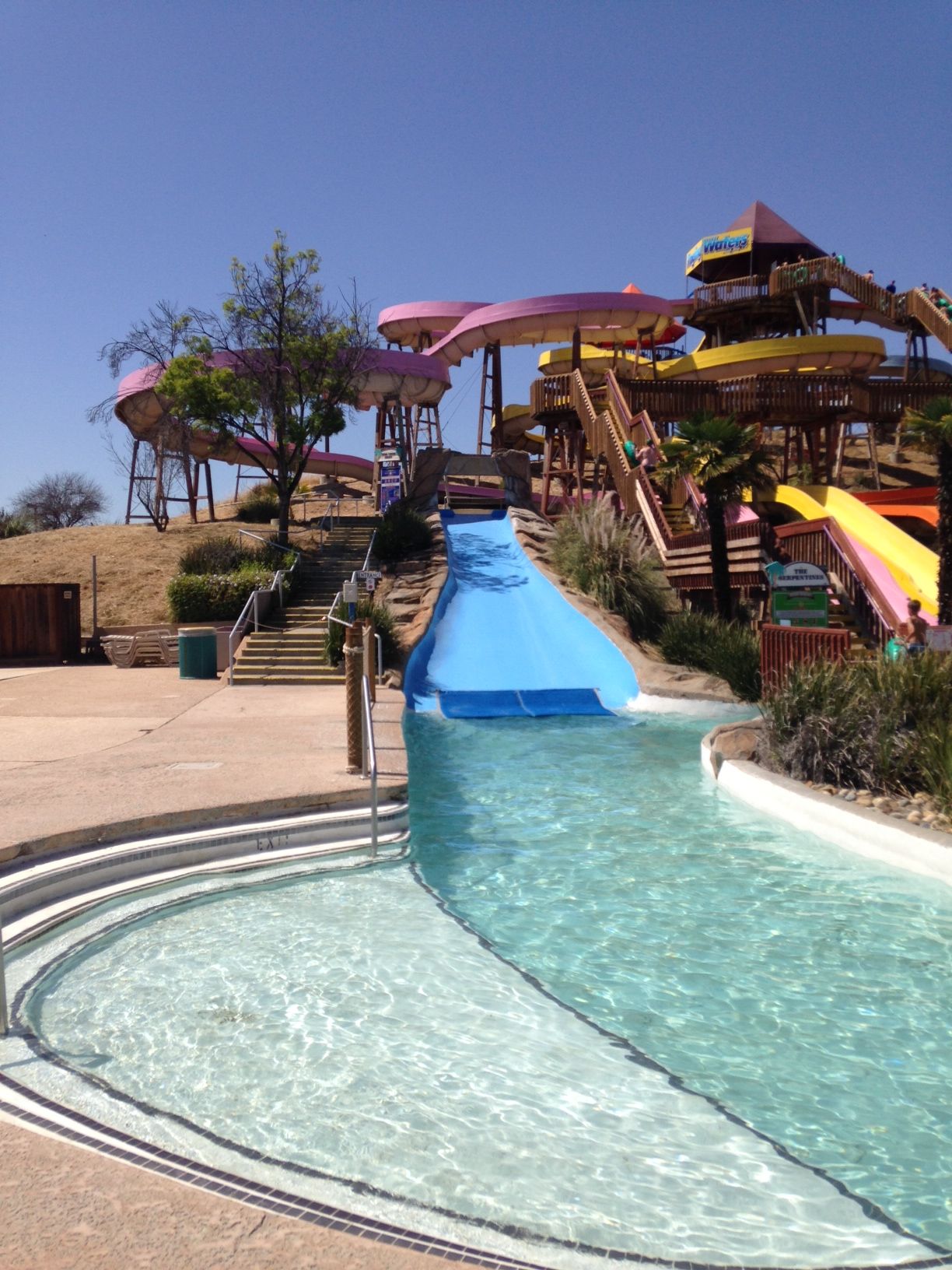 The next slide you will notice is called Shotgun falls. It is a pair of identical green slides that are really very simple. They are open body slides that consist of a small drop into a straight section that then dumps you out about 6 feet above the pool below as you free fall into it. Simple, but it is really a lot of fun. It rarely has a long line due the durations and the fall at the end is pretty thrilling. Although it may not be talked about a lot, it’s one of our favorites. It is also built on the side of a hill and once again integrates terrain nicely. 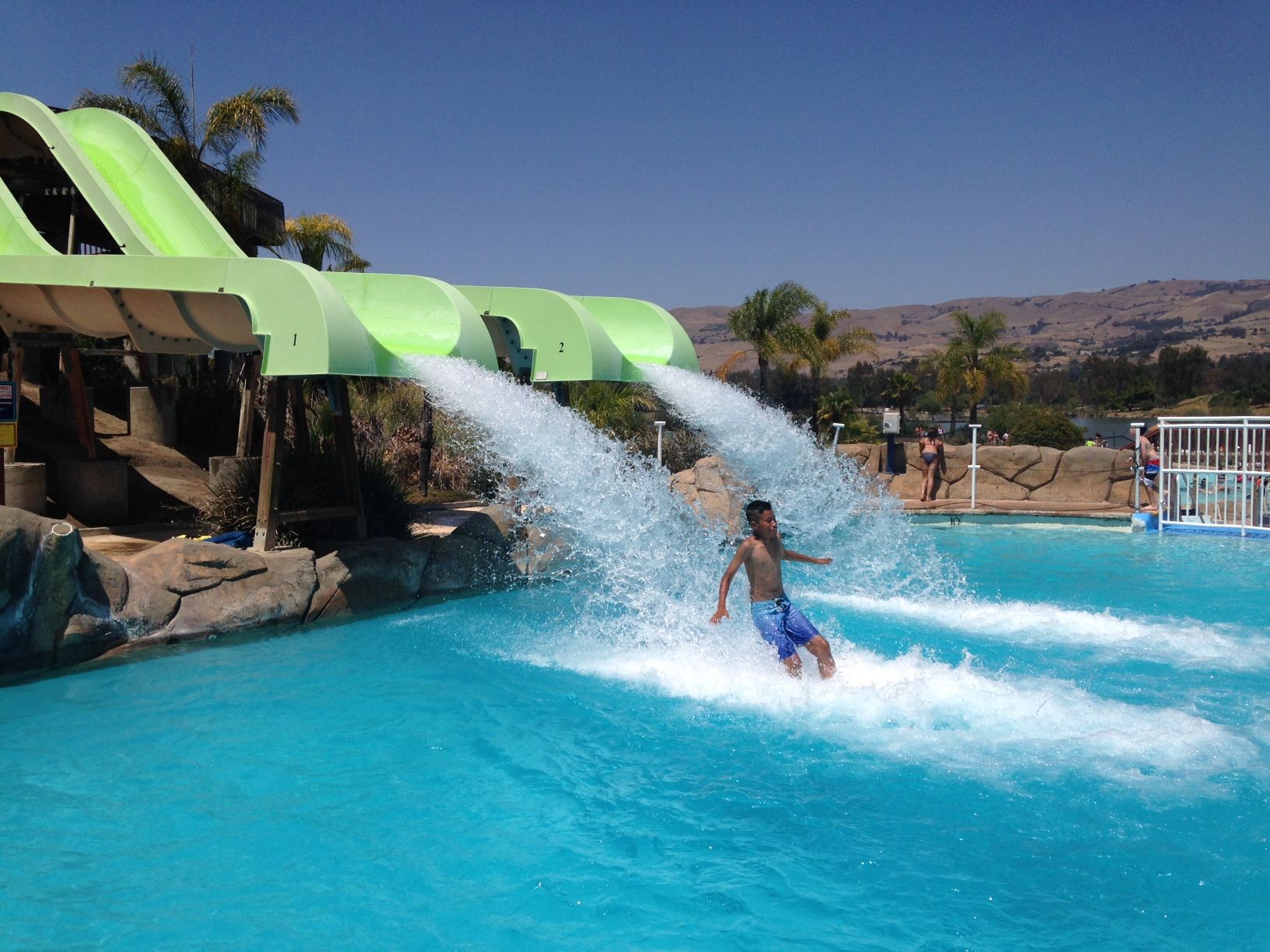 Very close to Shotgun Falls are the parks speed slides, White Lightning and Blue Thunder. These dueling body slides really do build up some good speed towards the end during their drop sections, but often times you will find yourself scooting along the top section of them. In any case, once you get to the drops some great airtime and speed is to be found. 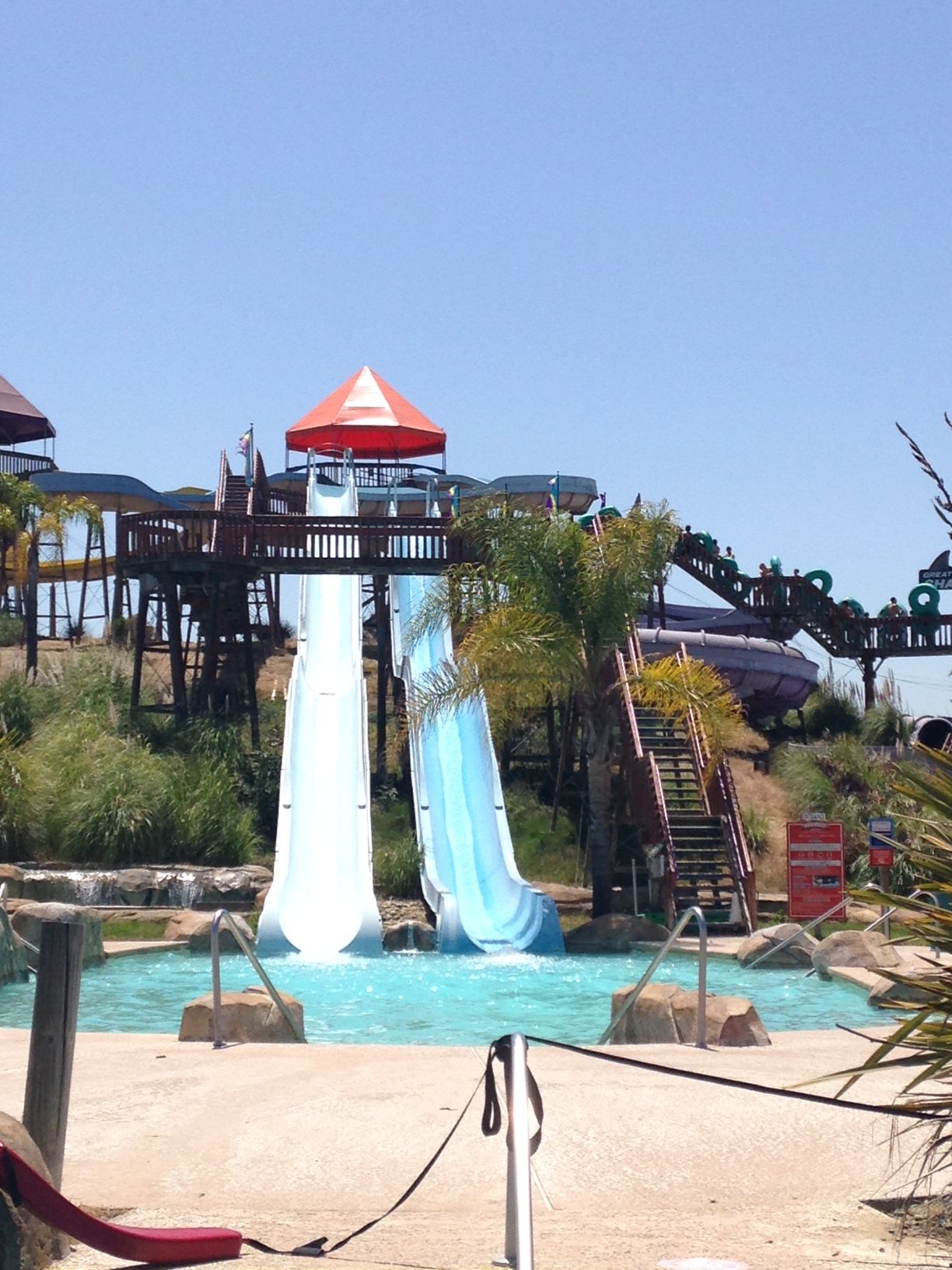 The difference between the two is a question of quantity vs quality. White Lighting has three smaller and shallower drops, whereas Blue Thunder has two bigger and steeper drops, both of which follow the counters of the hill it is built on impressively. Both however, build up some good speed and end in a splash. Good slides overall. We suggest you lift your back slightly on the drops to avoid it being clipped.

One of the more popular slides in the park is Great White Shark. Its most recognizable feature is the large sharks mouth riders will pass through along their journey. Although this is a cool touch, we find the slide a bit underwhelming and not worth the perpetually long line it has. It has a cool dark section towards the end, and the shark head is pretty good, but overall, it is a family slide, and due to it’s long lines, it’s probably not worth your time. 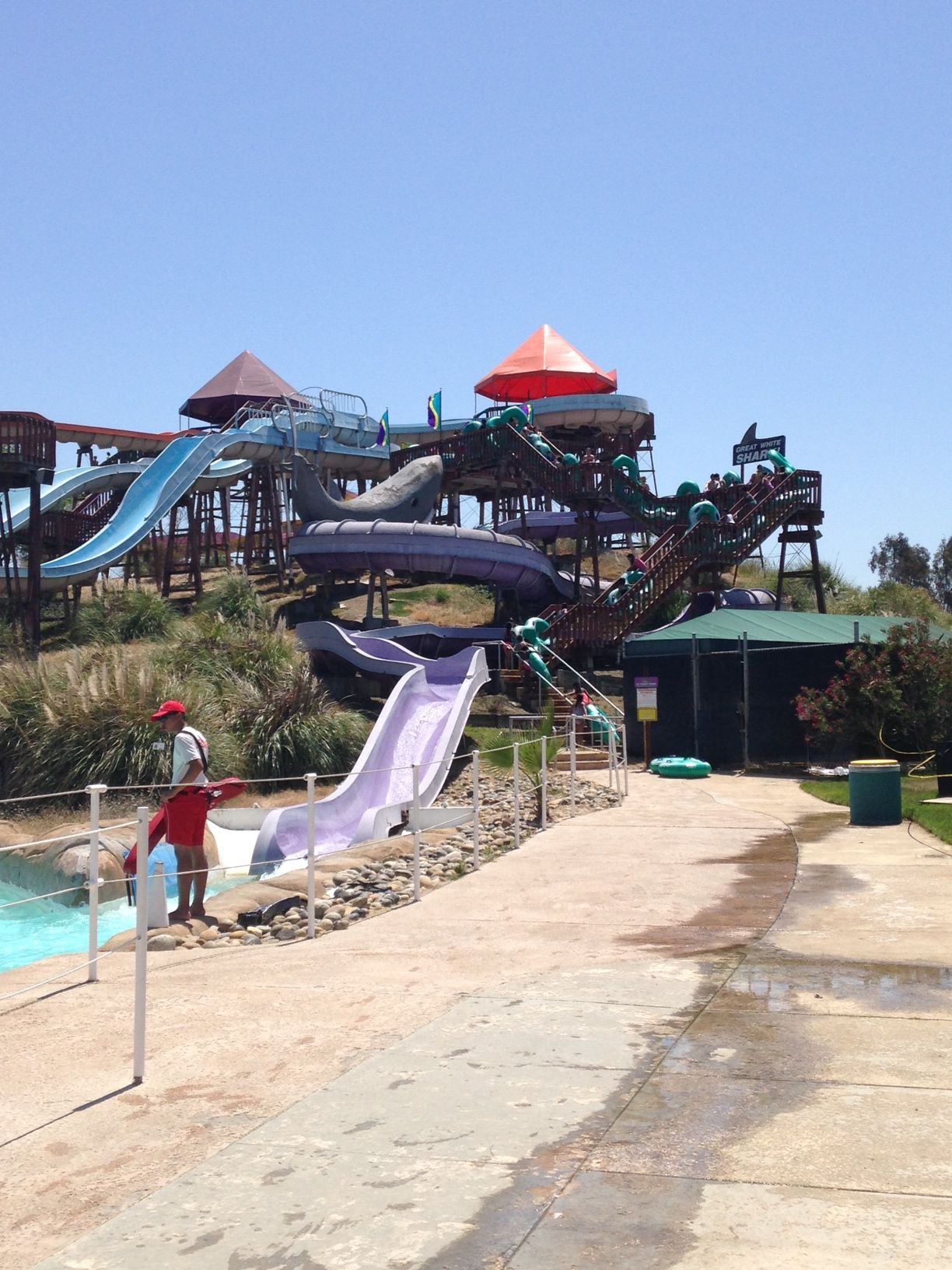 Next up is Dragon’s Den, a clone of an attraction by the same name at Raging Waters San Dimas down south and near-by Raging Waters Sacramento, both of which are two person tube slides. It consists of a decent size drop drop into a ‘toilet bowl’ where riders will swirl around the dragon  for a few revolutions before being dropped through a waterfall into the splash pool below. The first drop is enclosed and is pretty good. It provides some good speed which is carried over into the first revolution where riders will travel through it quite quickly and bank pretty high onto the walls. After this, it is highly dependent on the weight of your tube. Some riders will drop down after one revolution, some can get up to four. In any case, once you do flush, you pass under a waterfall and into a pool to really soak you for the finale. 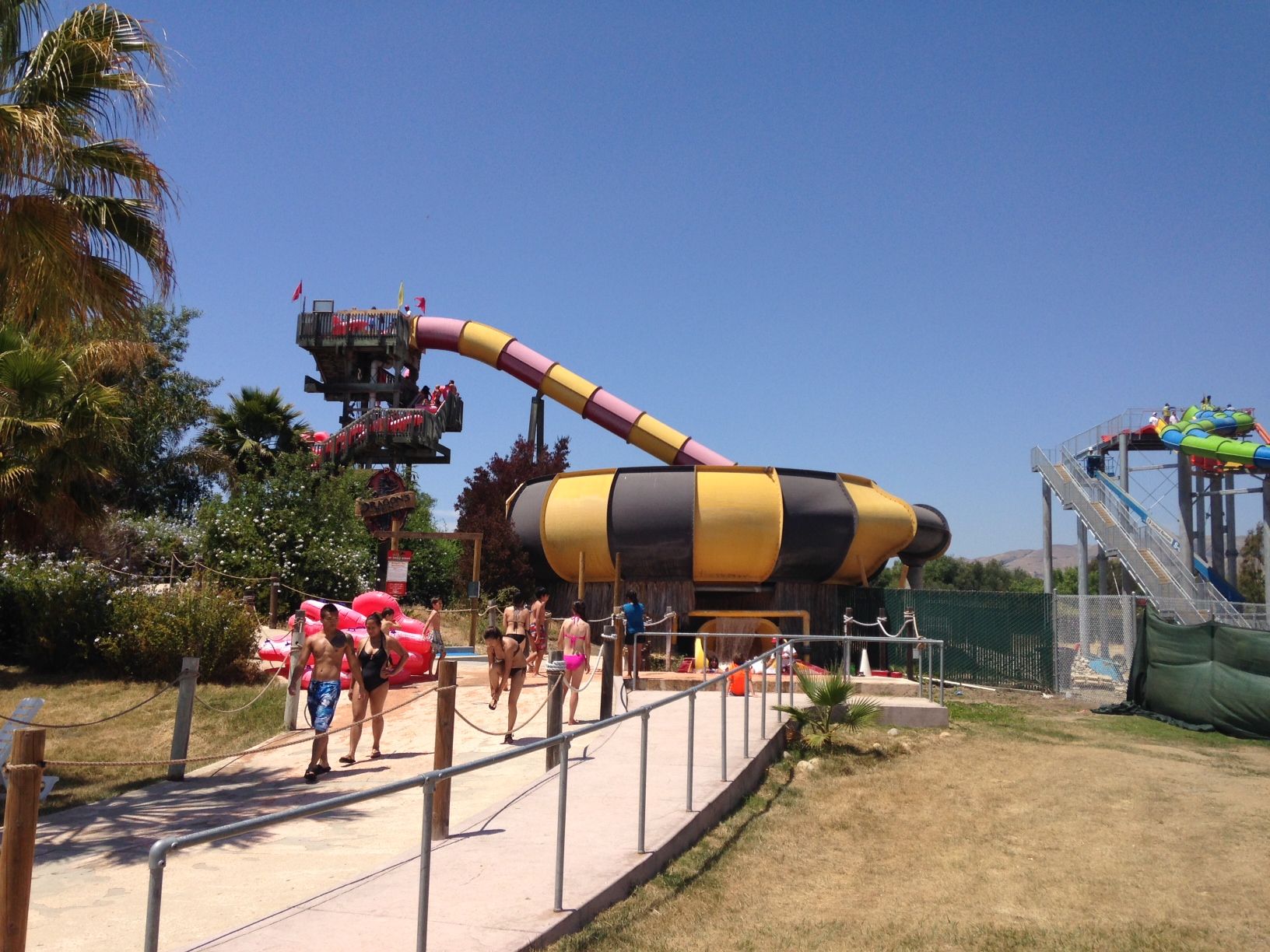 The last slide complex of the park is also built on a hill, and is home to Barracuda Blasters and the flagship slide Bombs Away. 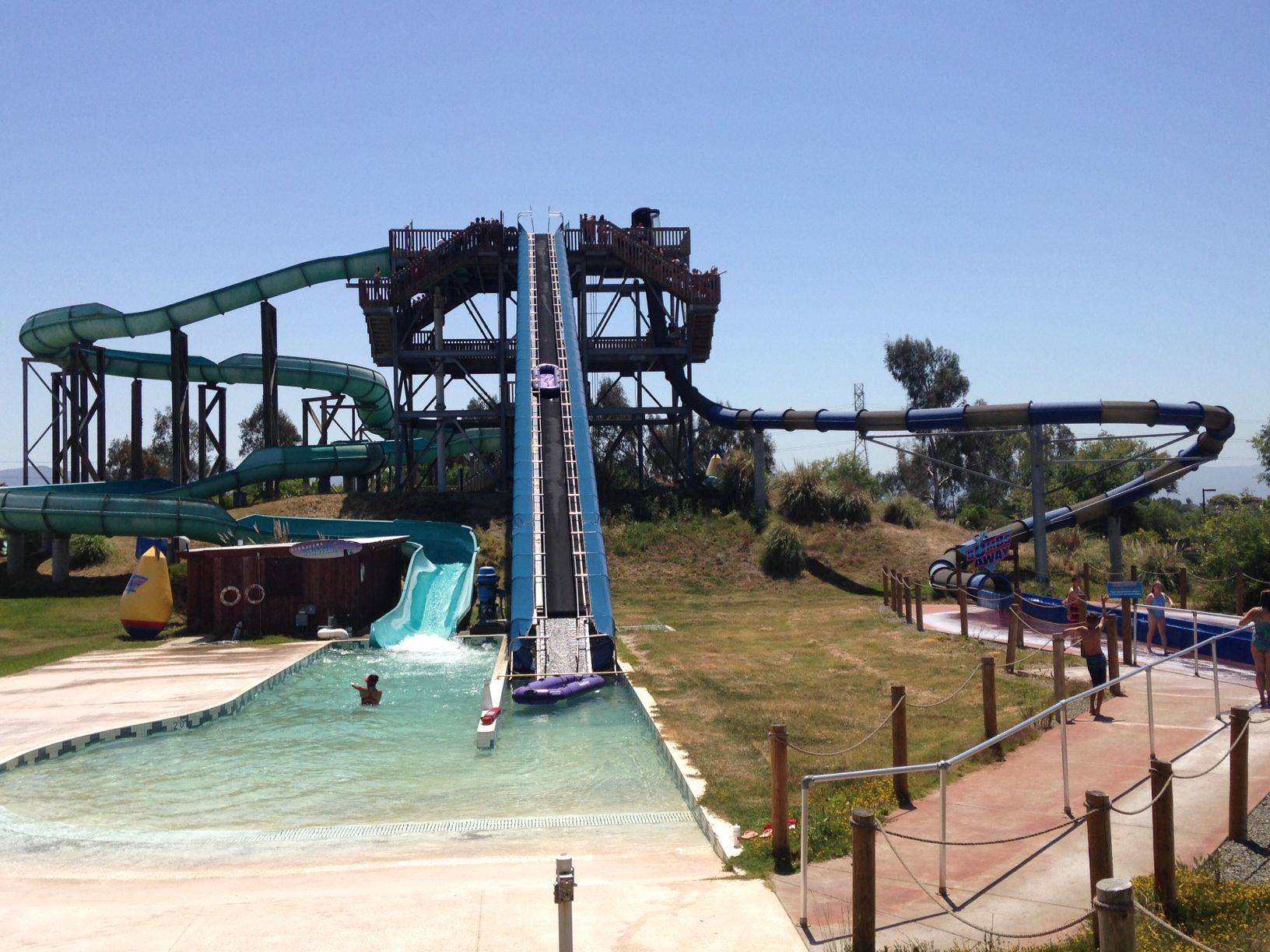 Barracuda Blasters is a three person tube slide that focuses on high banking turns. The combination of the length, speed, and banking of this slide makes it really a lot of fun and the perfect amount of thrills for the whole family to enjoy. 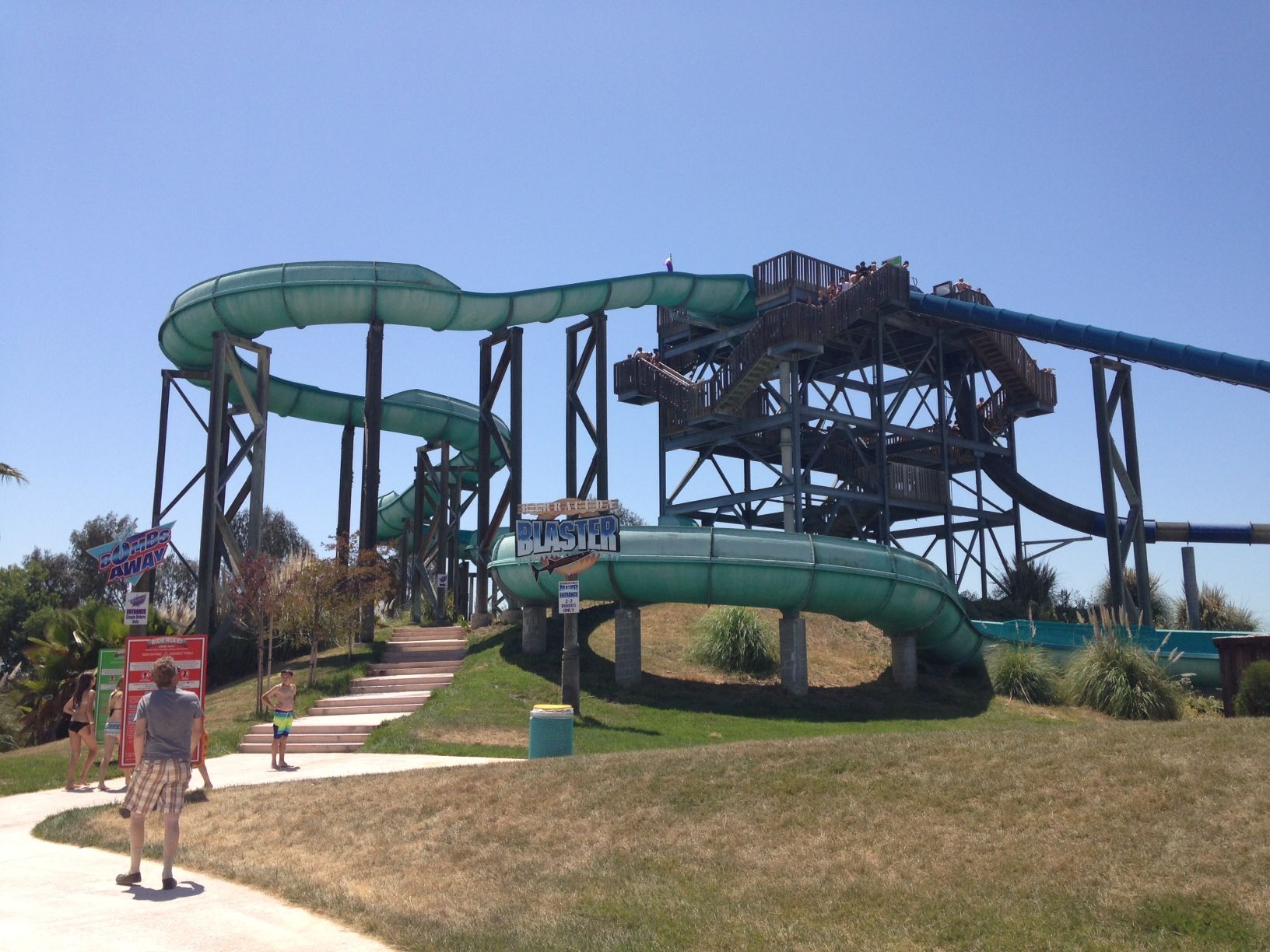 Last but not least, there is Bombs Away, the first trap door slide on the west coast! After climbing a good bit of stairs, riders approach a capsule in which they see the guests before them disappear. Once it is your turn, you enter the capsule and the door is closed behind you. There is a beating heart soundtrack that is soon interrupted an announcement that says “Three, two, one, launch!” The floor then drops out from beneath you and you freefall for about twenty feet which is an amazing feeling, Once the slide pulls out, you enter a large helix which pulls some really strong g’s before splashing down into the run out. Despite its short length, this ride is the epitome of thrilling, and is one of the only attractions that gets us a bit nervous every time. It is by far the best slide at the park and cannot be missed. 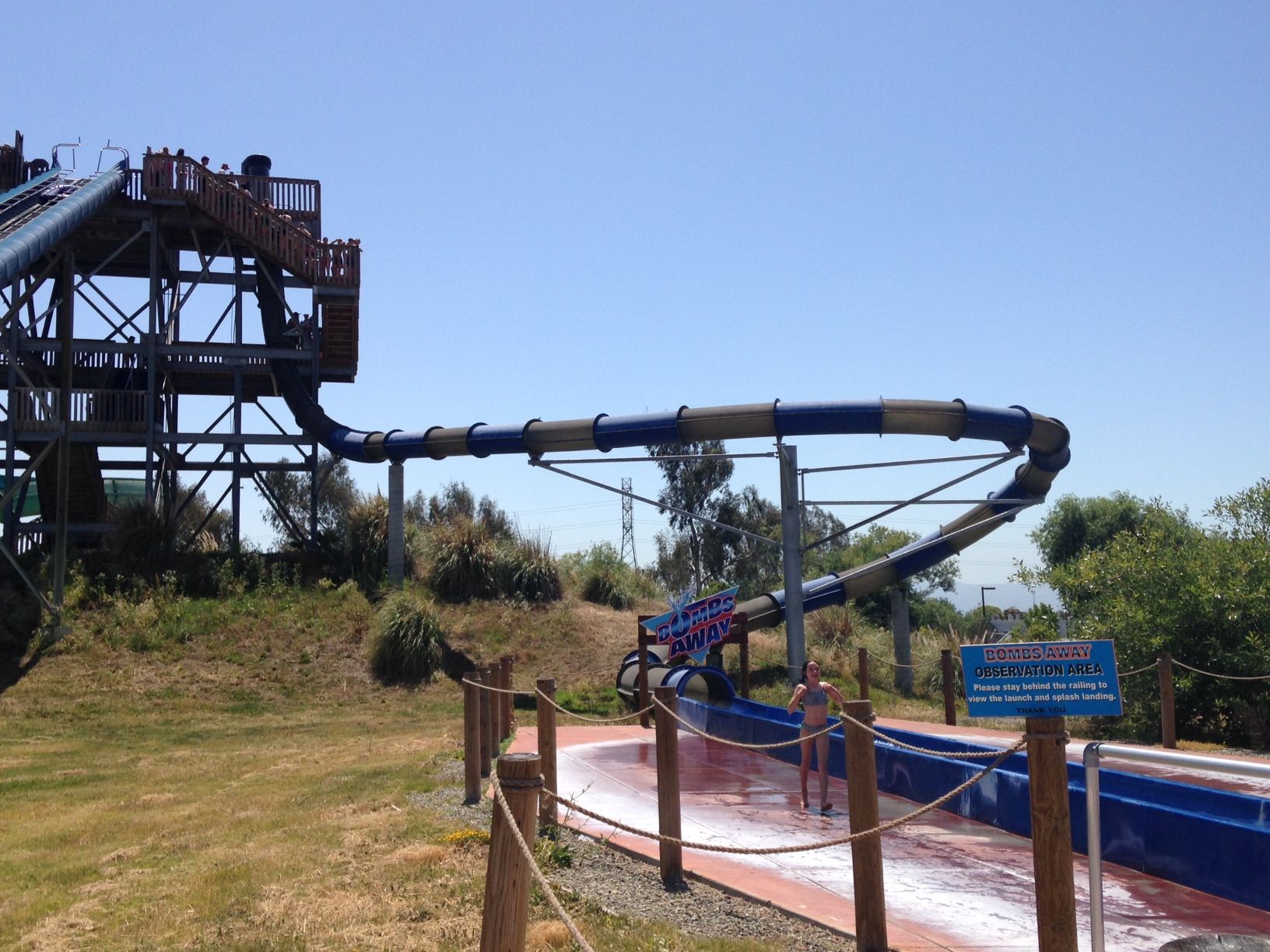 Of course the park also has other staples of the industry, such as a wave pool, a lazy river, and some kids’ play areas. 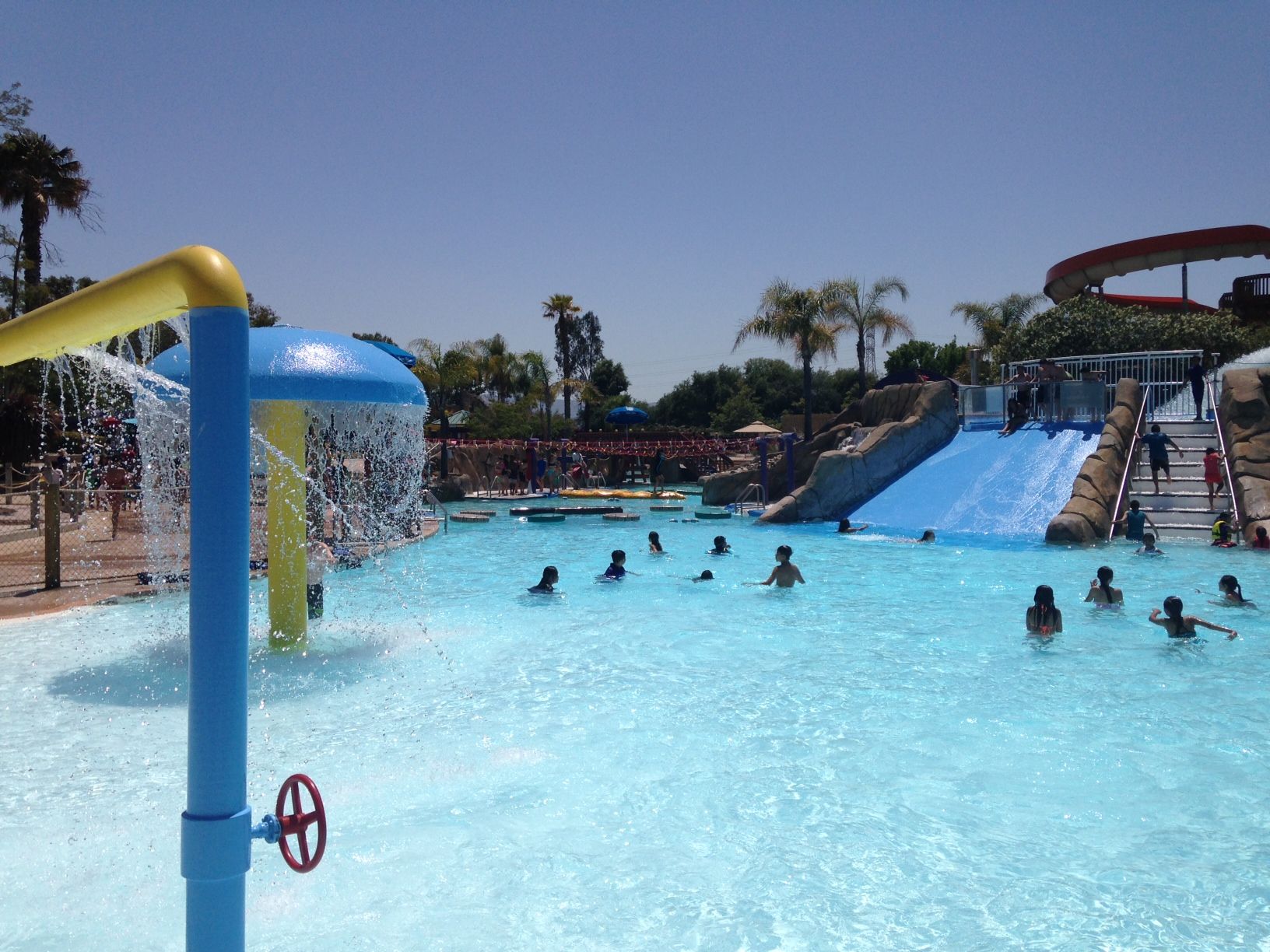 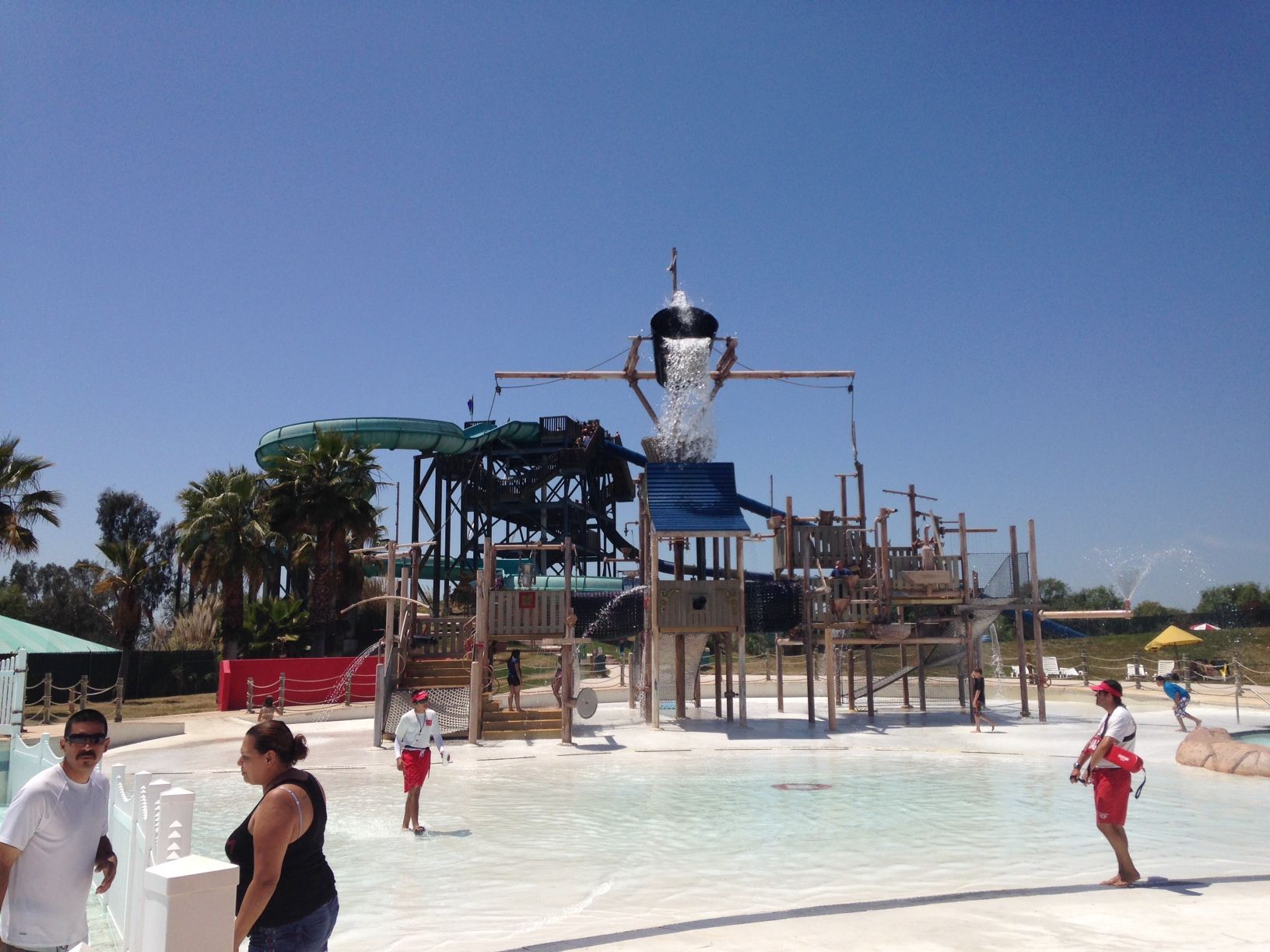 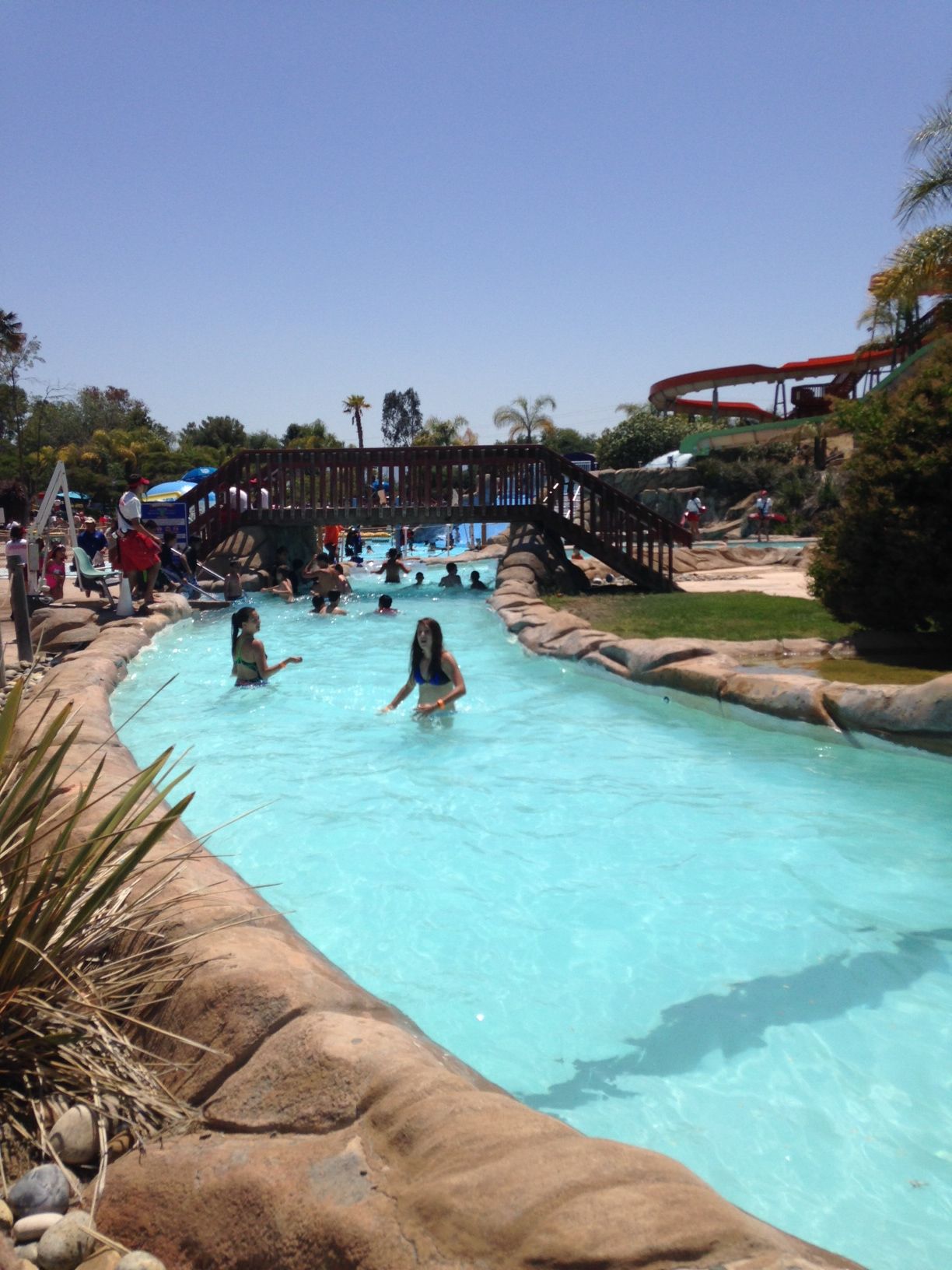 Also notable is the park’s setting directly across from a lake and the surrounding San Jose hills. It really is very beautiful and adds the whole natural feeling of this park. 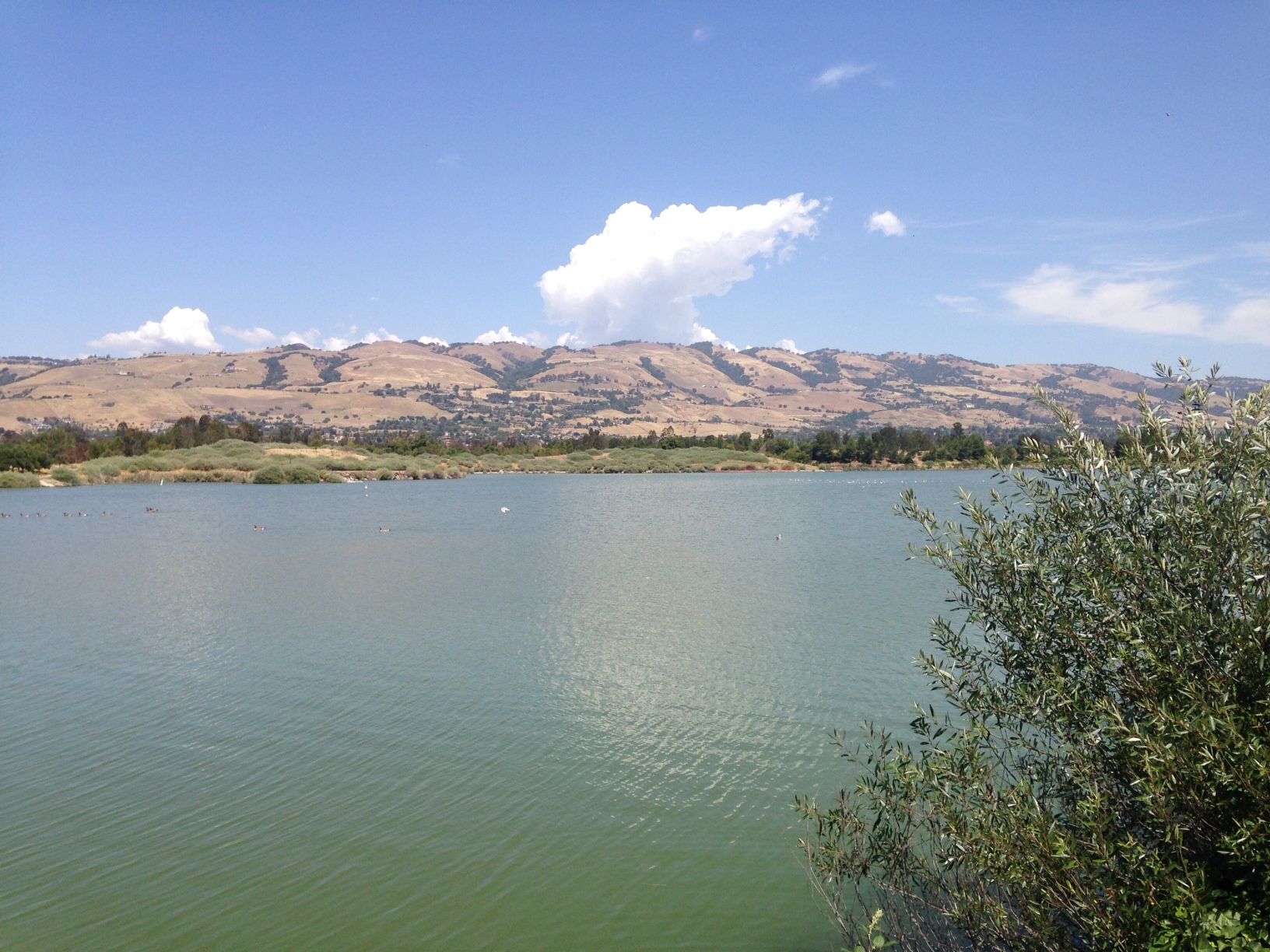 Overall, we are very excited to have started our coverage at this underrated water park! Look for more coverage throughout the summer! 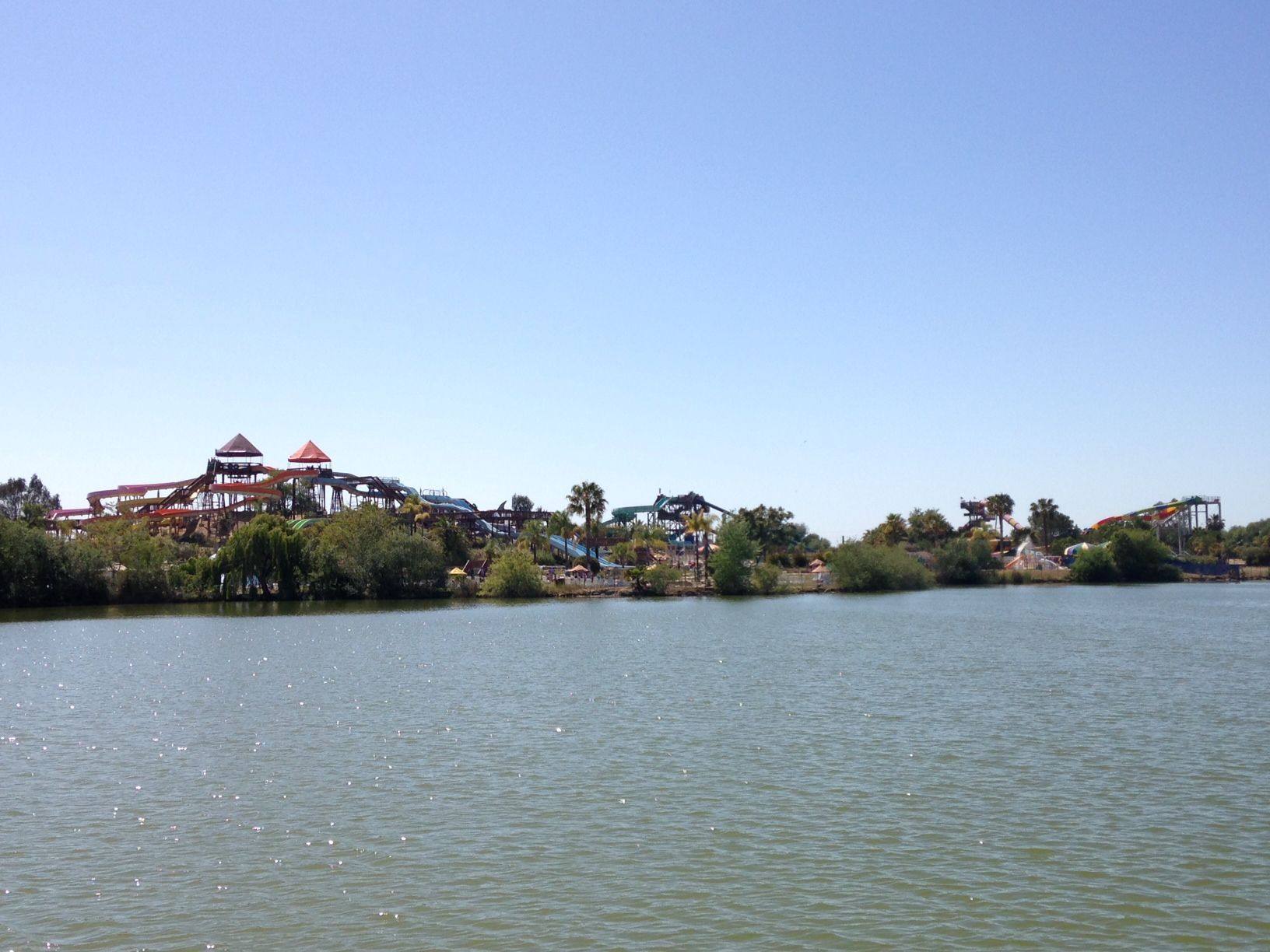 The fountain in front of the food court as well as the waterfalls near the entrance of Shotgun Falls were both turned off, employees of the park didn’t have an explanation. It’s likely because of the drought. Park’s around the state are conserving water. 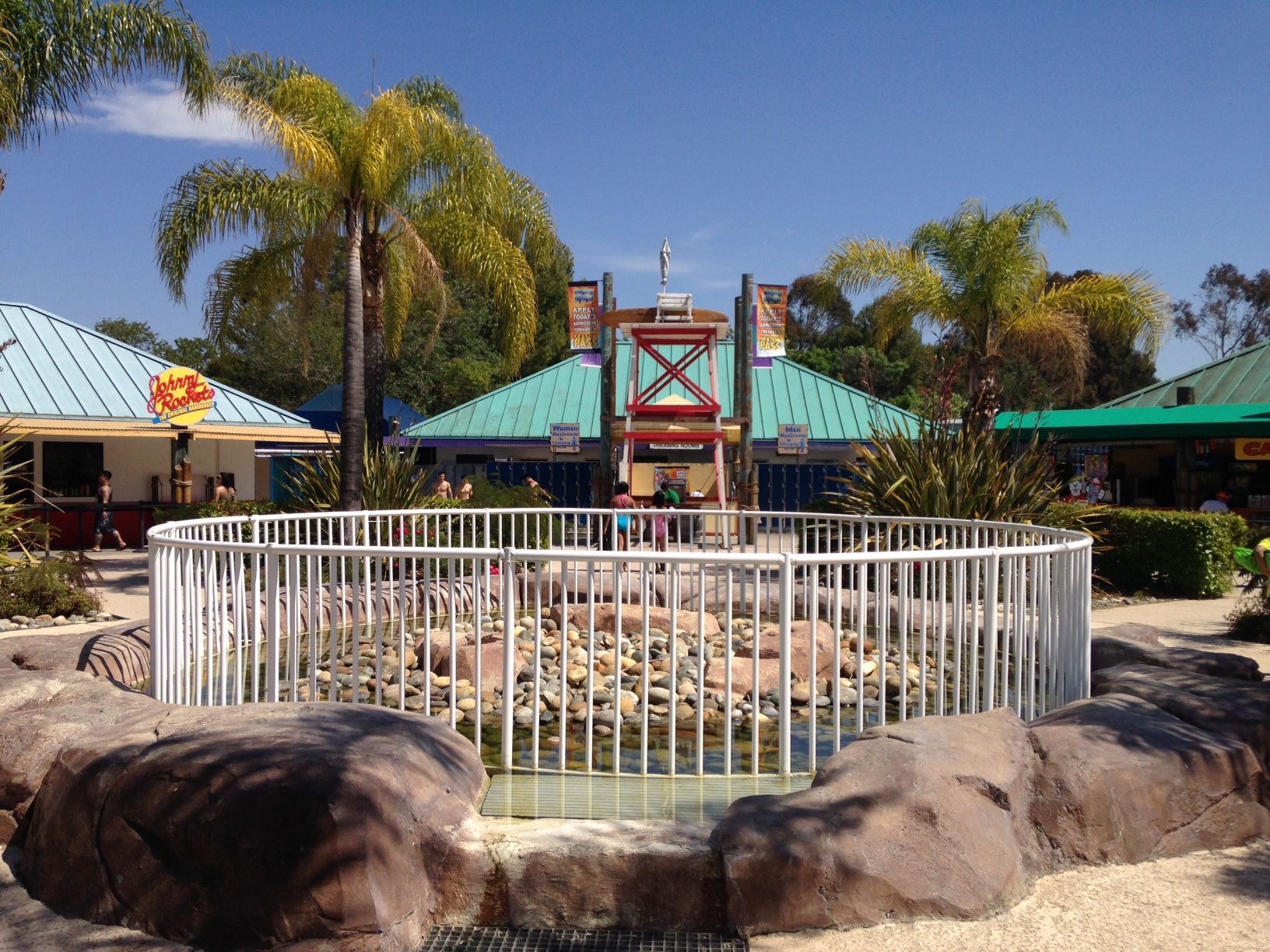 Slide Creek Falls was closed all throughout the day and had no water running.

The speed slides began the day being closed despite having water running, but opened up at around three, about an hour before the park closed.

The Wave Pool closed at around the same time, despite having been open the entire day leading up to that. 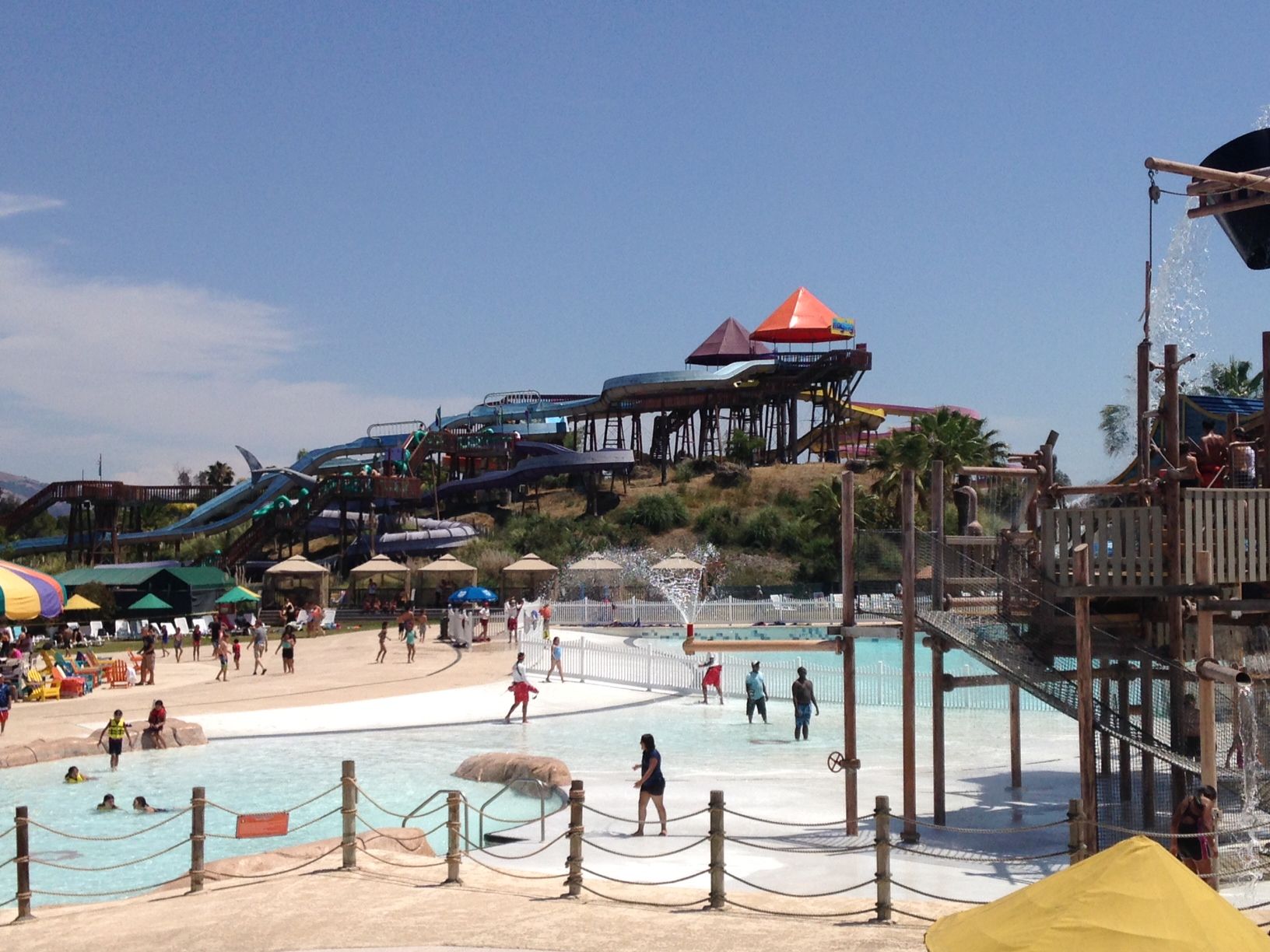 The Endless River was inexplicably cold, although since it was such a hot day, it was quite refreshing.

Many school trips were at the park which was what made up the majority of the crowds. 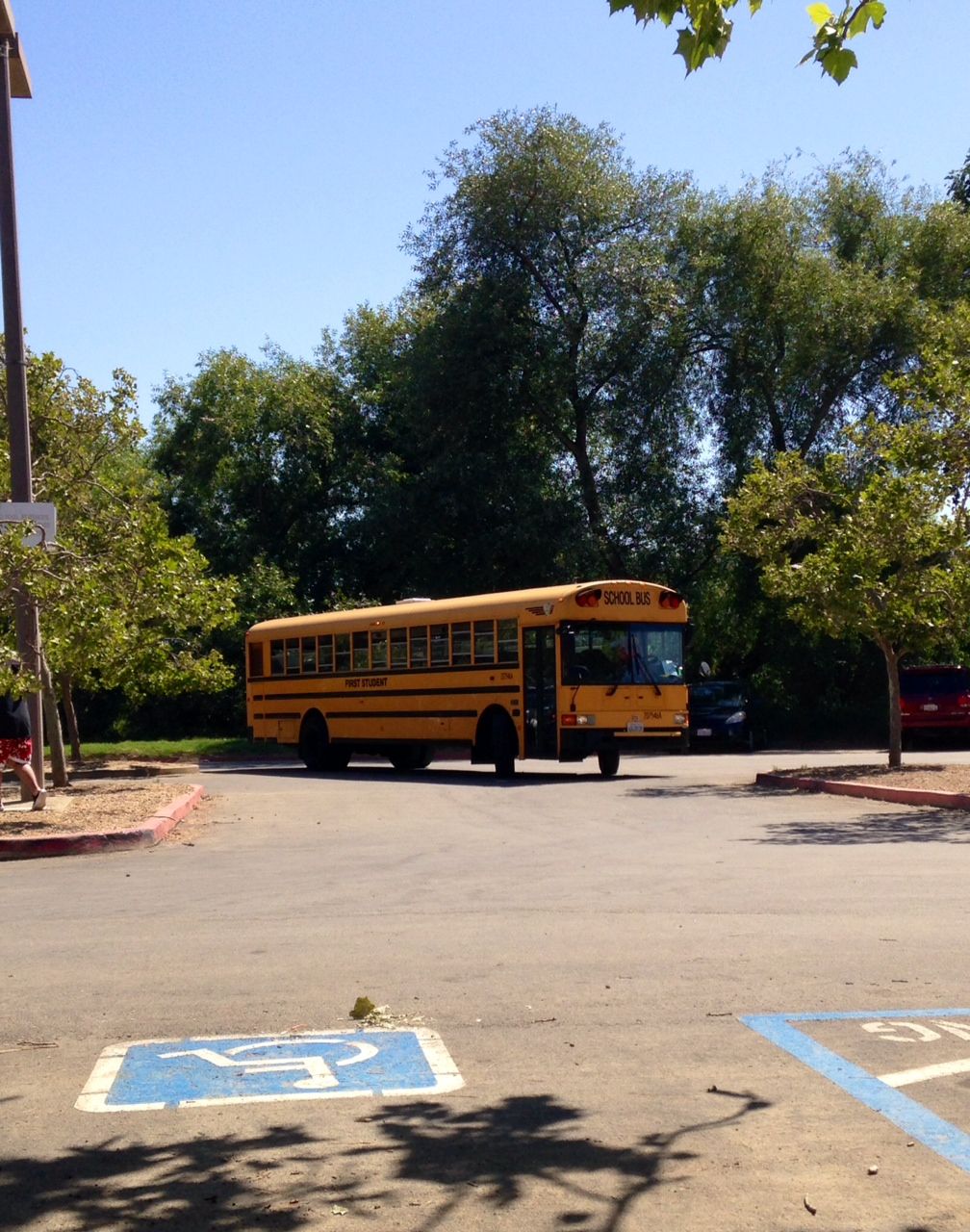 Sidewinder, the new racing mat slide for 2015, is nearing completion! 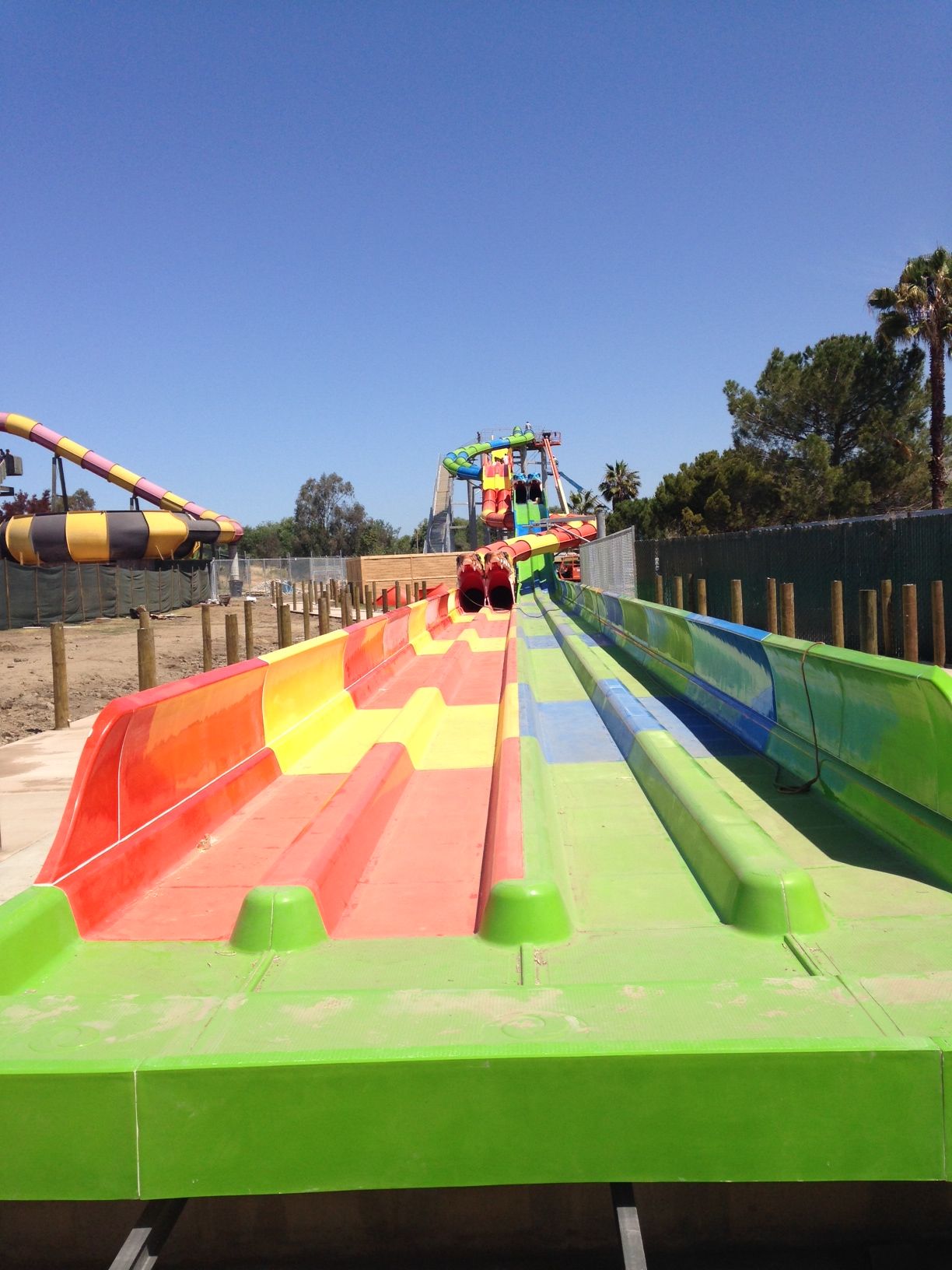 Only a few more pieces of track to be installed! 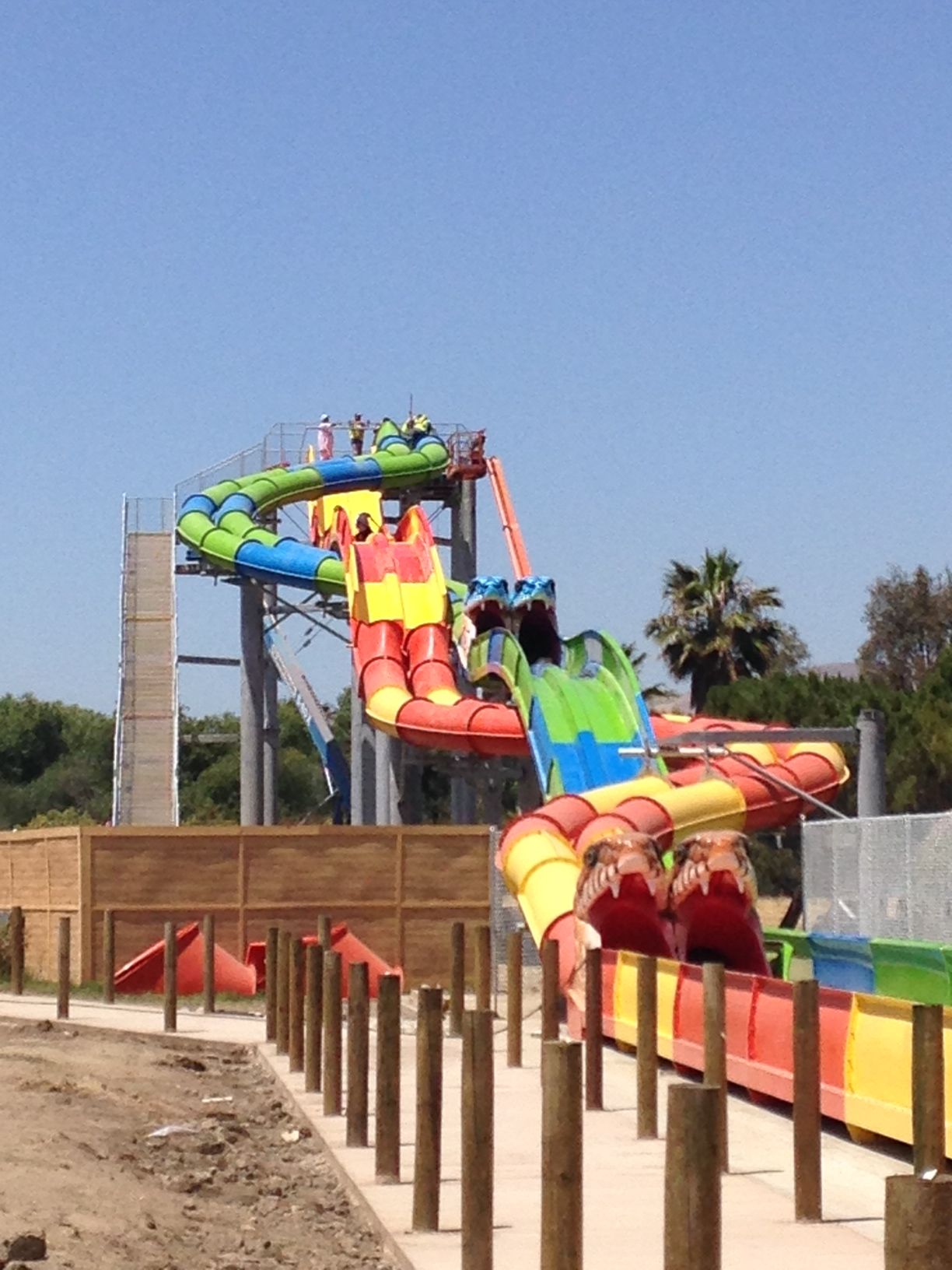 The queue and stairs have been completely installed. 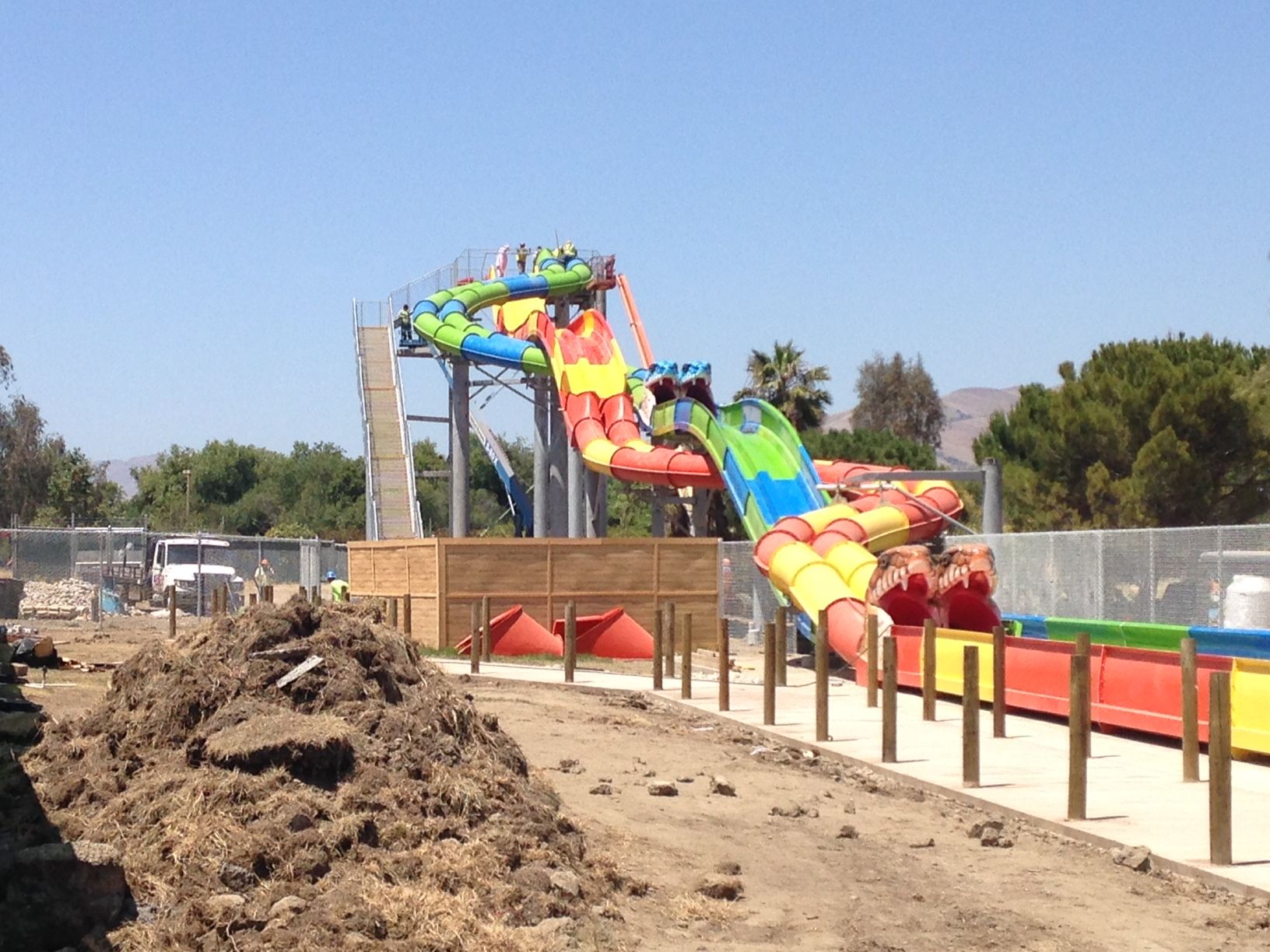 Many workers were on the slides seemingly doing some measurements. 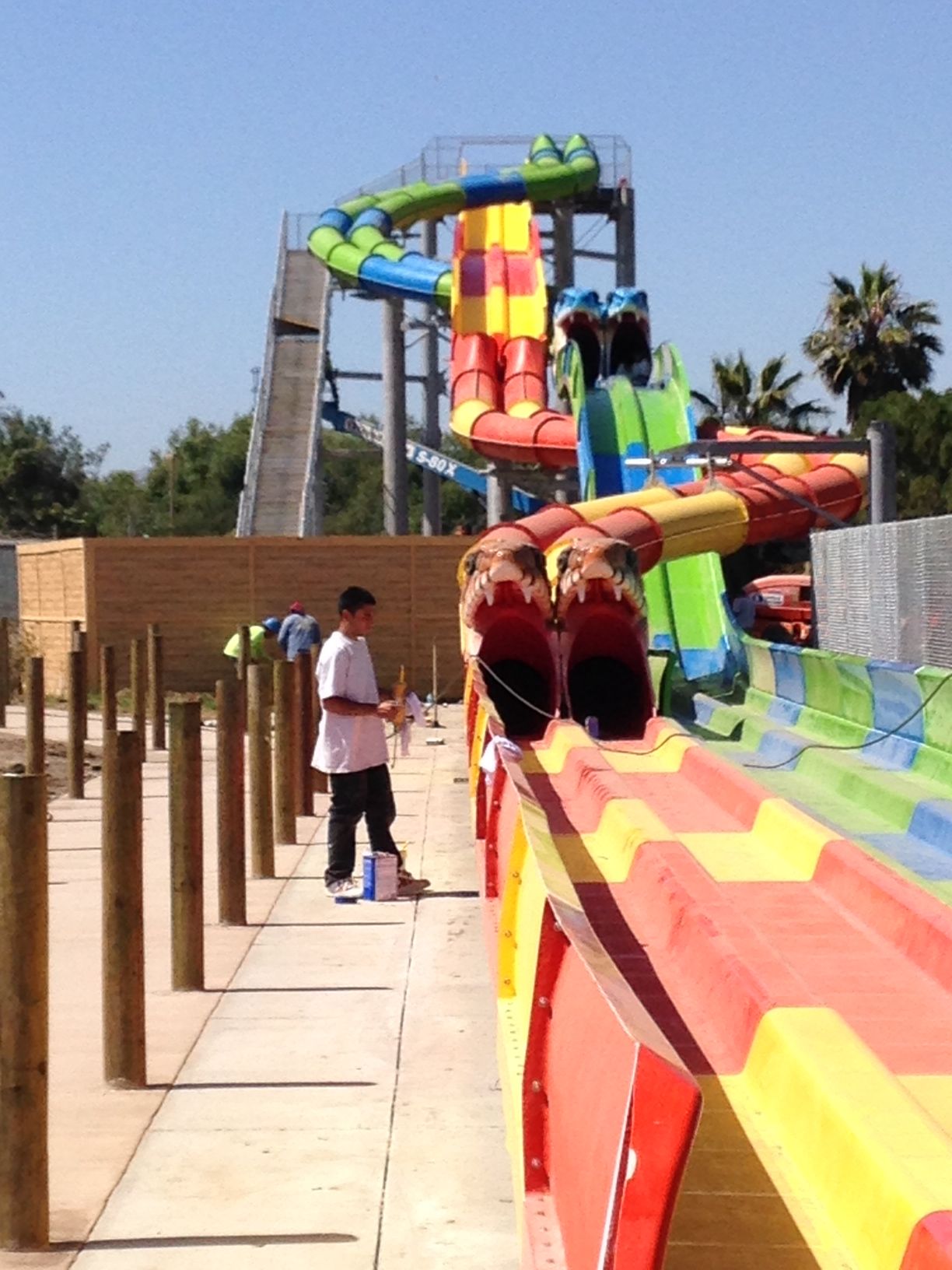 Once they hook up the water, this ride should be ready to go! It looks like it should be a lot of fun and add something unique to the parks lineup. We can’t wait for it to open!

Thanks so much for checking out this coverage of Raging Waters San Jose! Look out for more coverage of this park and other water parks in the future! What do you think of trap door slides? Comment below, and let us know.

Make sure to check out the Six Flags Discovery Kingdom Update from the same weekend here, it’s quite an interesting one. 😀