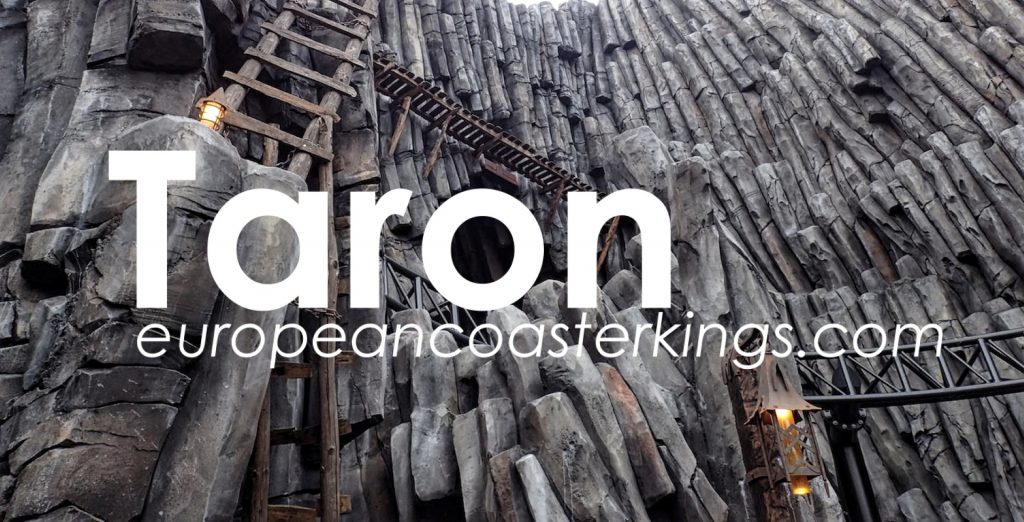 Sven: Hold on to your horses everyone. Yesterday one of the most anticipated new themed areas in Europe finally opened. Klugheim at Phantasialand is the medieval themed area with beautifully themed rock work, a cozy village style and most importantly: two new coasters! Are you ready for Raik and Taron?

– Over the years, many of our images have popped up on other sites and forums, awesome that our coverage spreads, not so awesome that not everyone mentioned where they got the images from. We are totally fine with our audience using our images, BUT ONLY IF credit is given to thecoasterkings.com. Thank you! –

We arrived a bit early, so went for a drink in one of the two beautiful hotels. Hotel Matamba is the African styled one, right next to the famous coaster: Black Mamba. 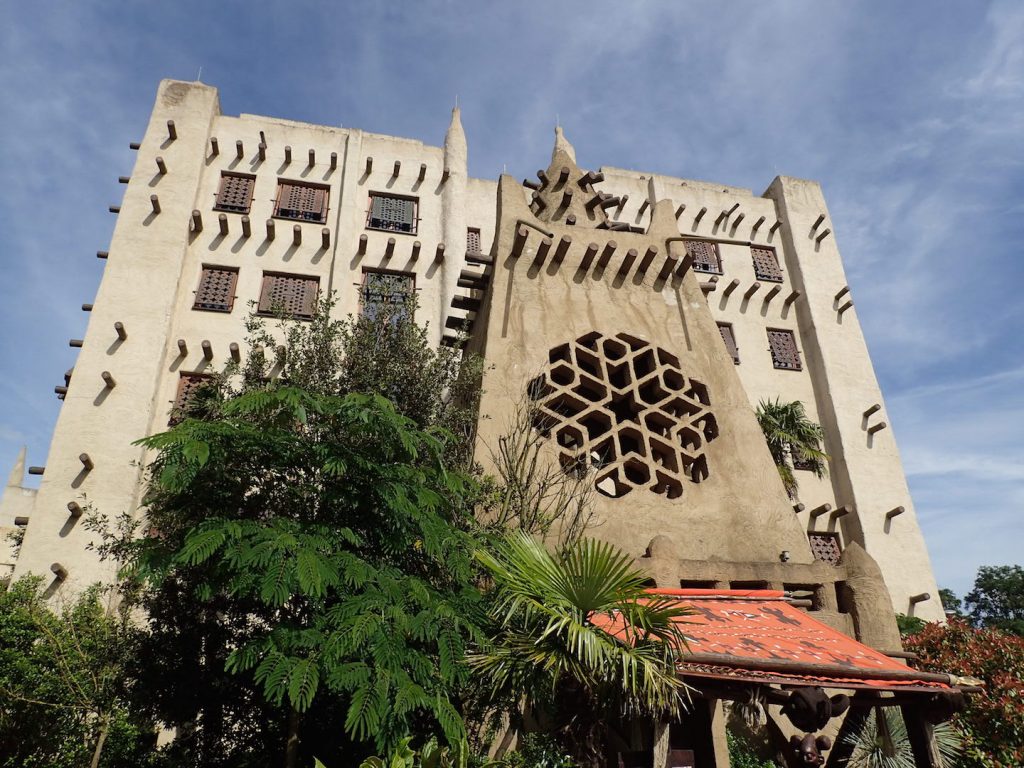 But today, we were not at the park for the black B&M. It was the opening event of Klugheim that was waiting for us. First we had to register by last name and the queue to do so took quite a while. After finally receiving the lanyard, we went through the gates through an empty ‘Alt Berlin’ main street, passing by a quiet Chiapas to stop at the gates of Klugheim. 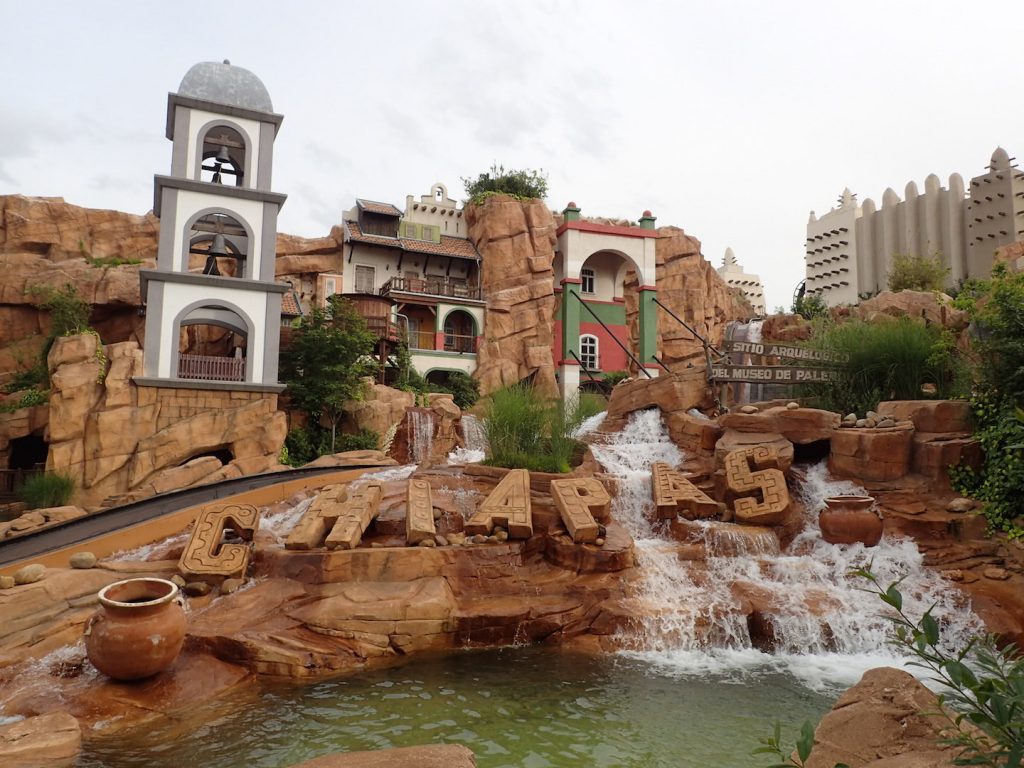 Smoke cannons opened the new area and you enter right on top of the second launch of Taron. On the right side you see the incredible upward curve with small waterfalls along the rock work. You continue in a covered market area which served several snacks and treats later on during the event. 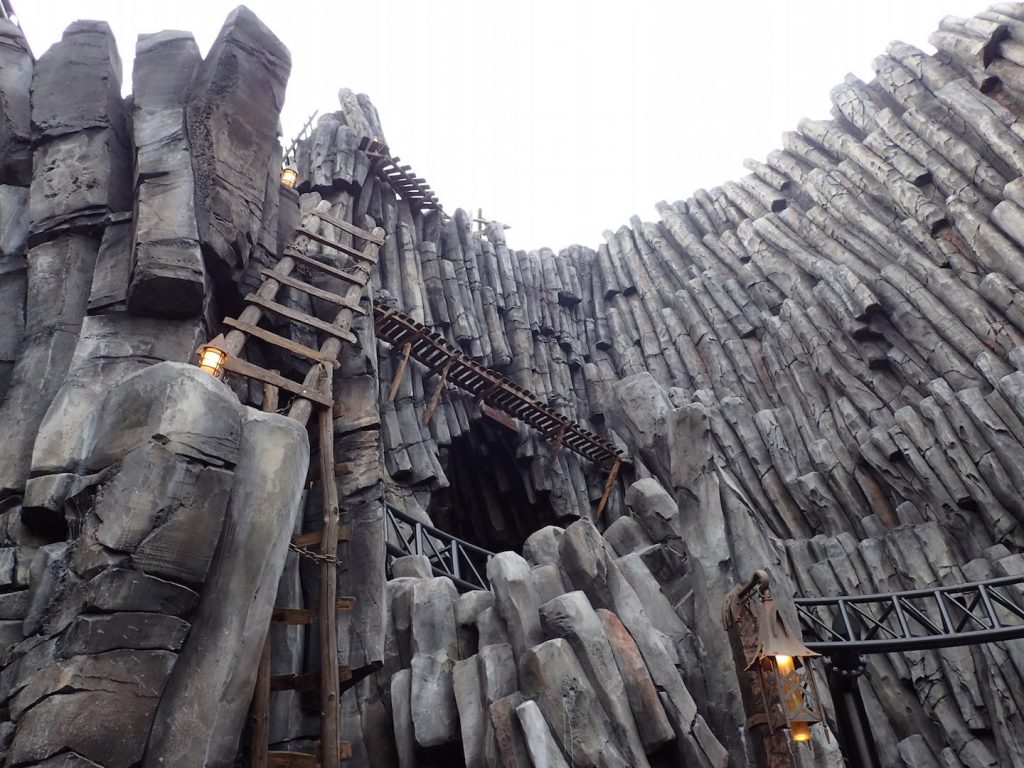 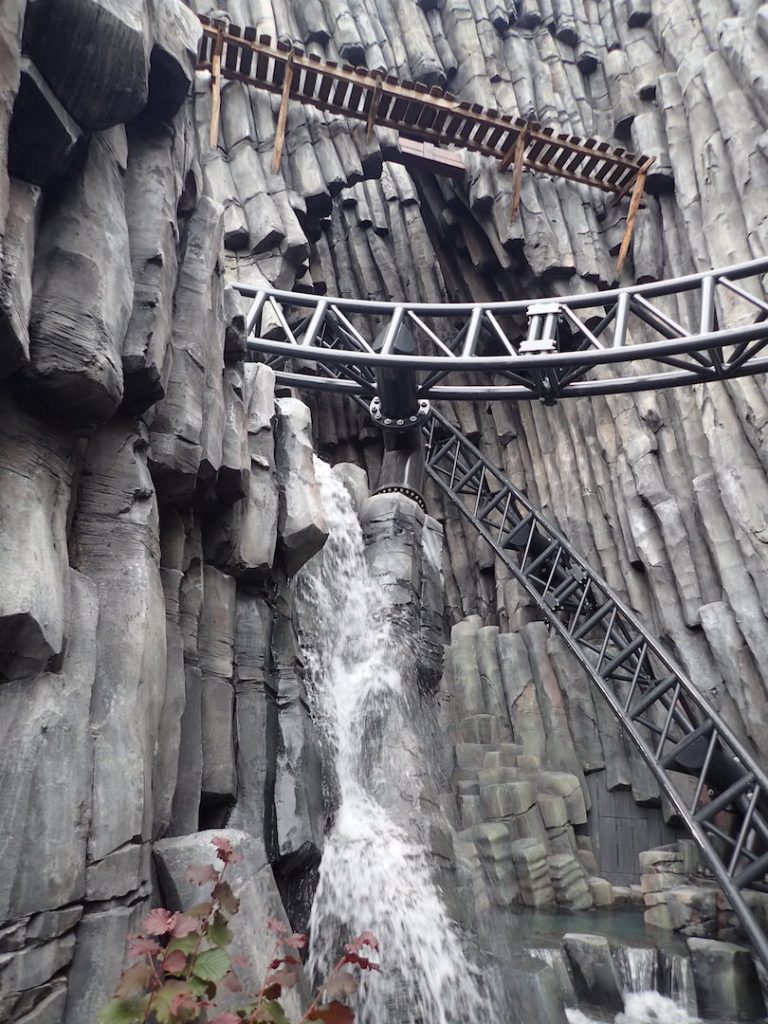 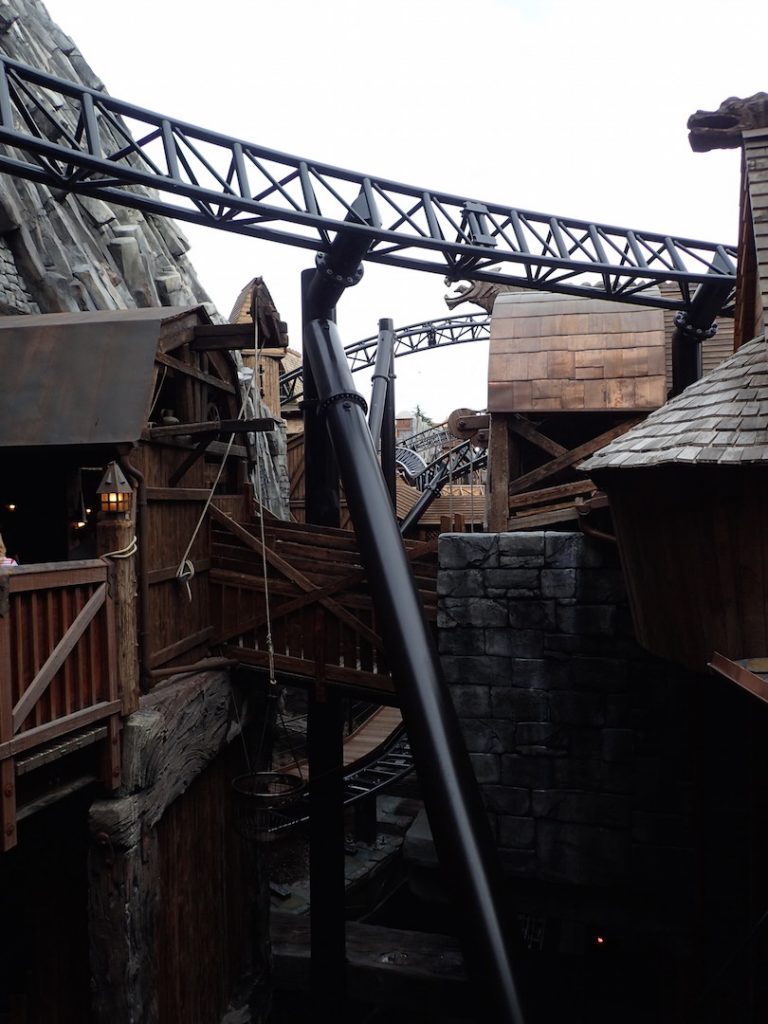 At the end of it, you arrive on the beautiful medieval market square of Klugheim. In the center a black leafed tree with several snack points around it. The atmosphere is stunning, especially with the wonderful music by IMAscore playing all over the area. In addition, you hear the sounds of crows… 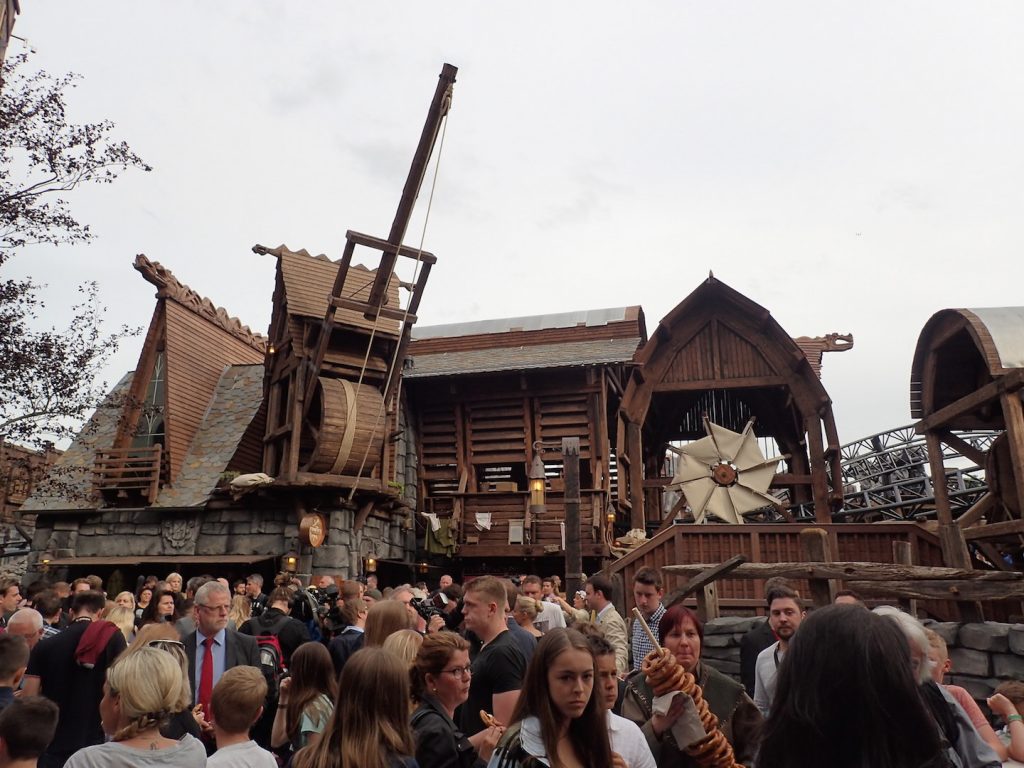 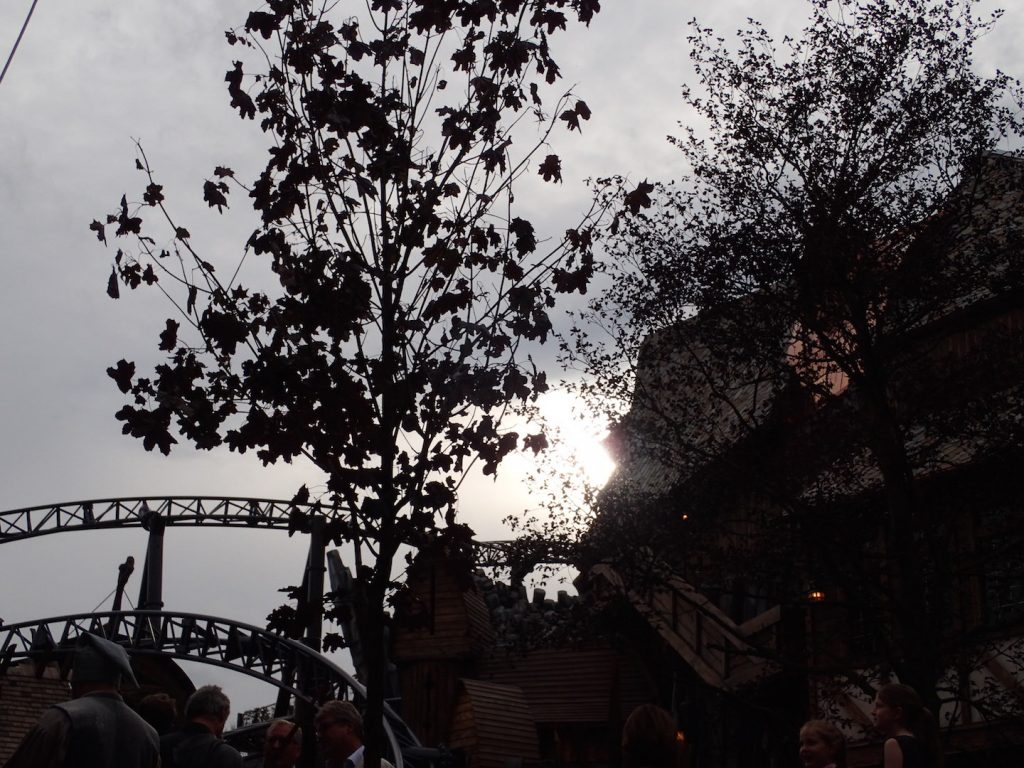 In the back, you see Mystery Castle towering above the area, an excellent architectural choice to build Klugheim deep in the ground. The tower could maybe use a similar color scheme to the new area, but that’s only a minor detail. 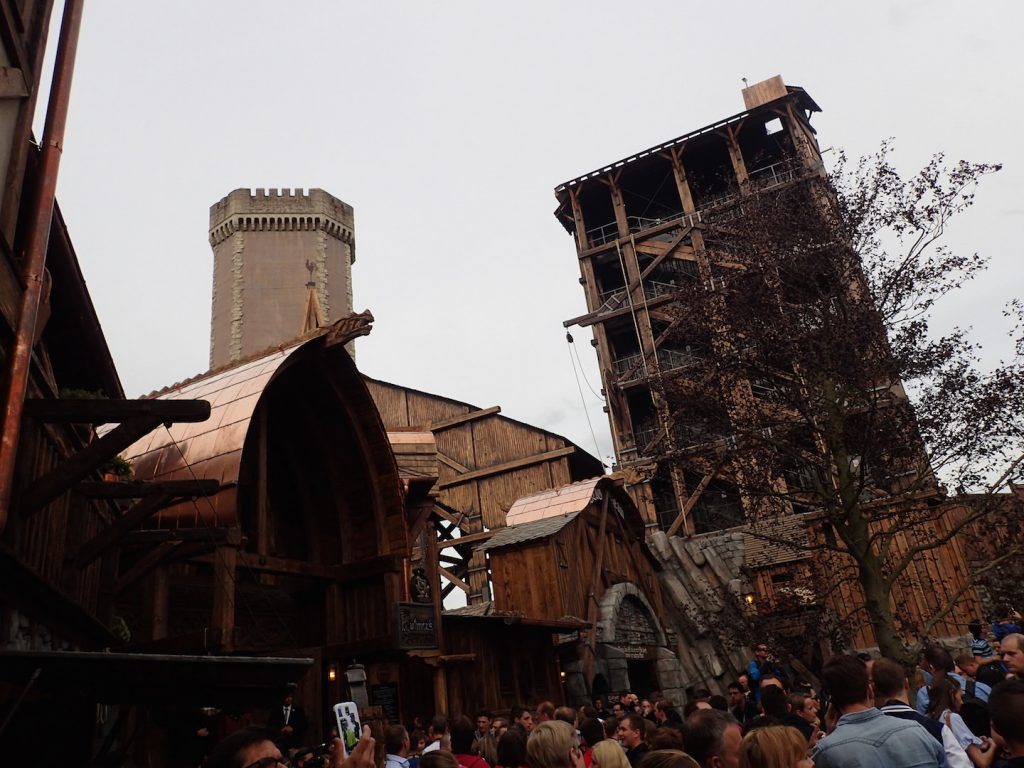 The inhabitants of Klugheim offered drinks (of course beer but also sodas, water…) and small treats as well. For example these delicious pretzels! 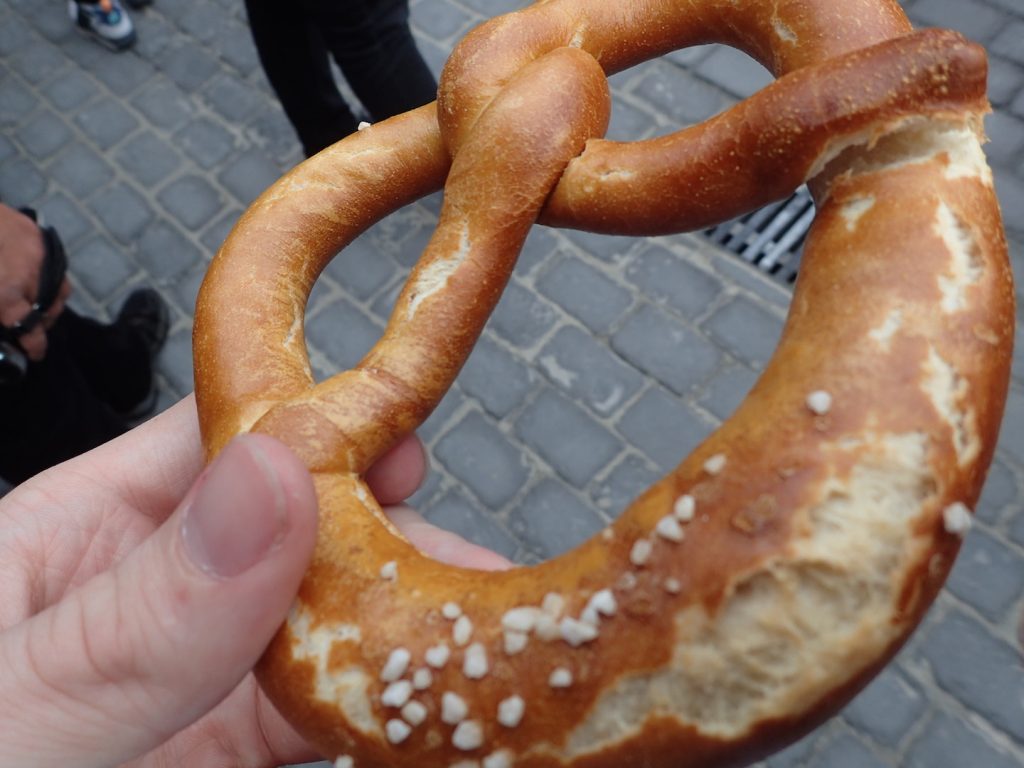 After a walk through the area, we found that the entrance of Taron was on the right side and Raik on the left side from where we entered. It was really strange to think that we were in Phantasialand, but had no clue where we were in the park. We didn’t receive any info or park map, so it all remained very mysterious… 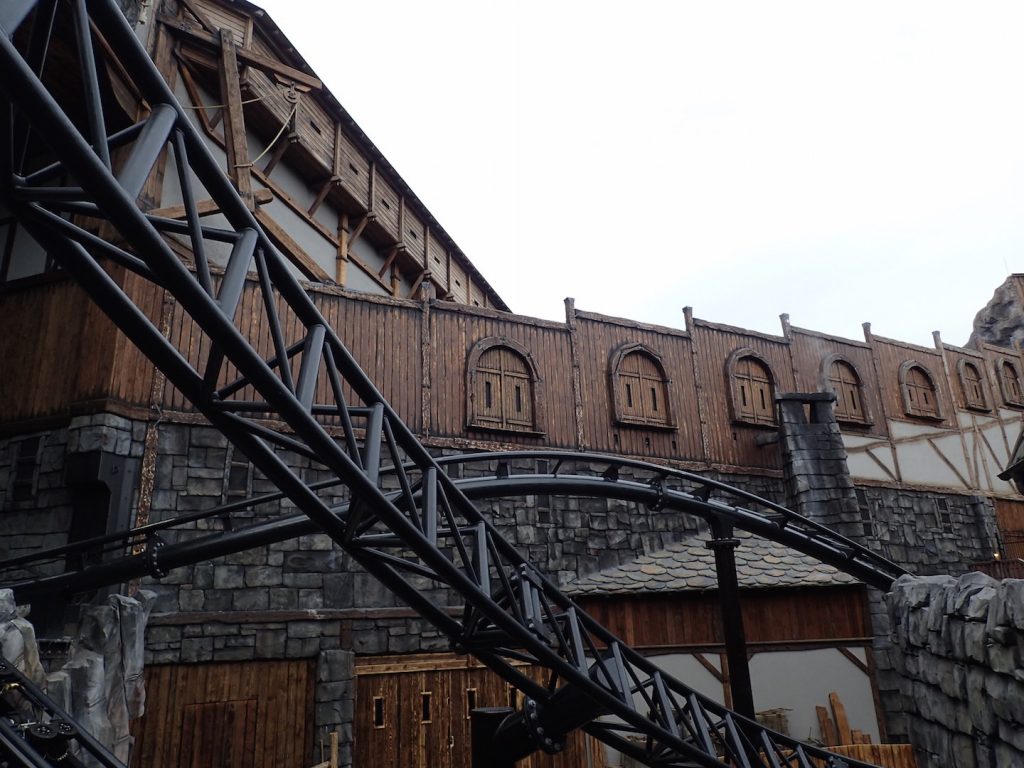 All of a sudden, the music turned up and apparently a little ceremony was held near the entrance of Taron. The only thing we understood out of the German, was that the ride was now open! We however, were standing at the entrance of Raik for the following reason: less capacity, so queue will be longer than Taron at one point. A good idea, but reality was different… 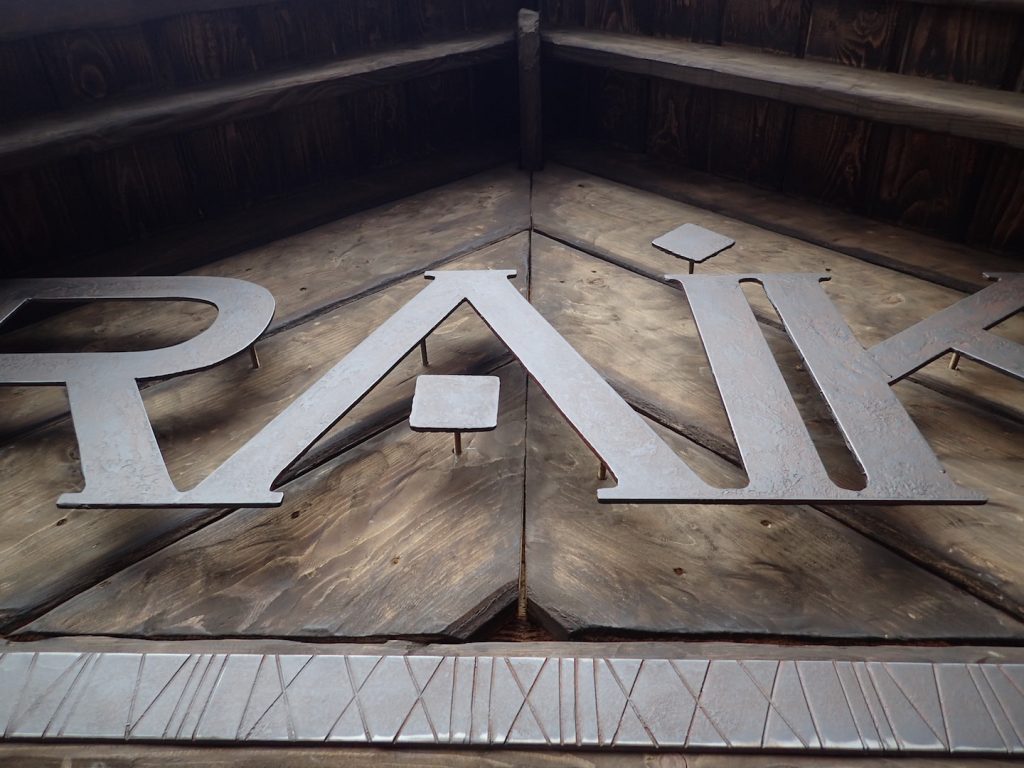 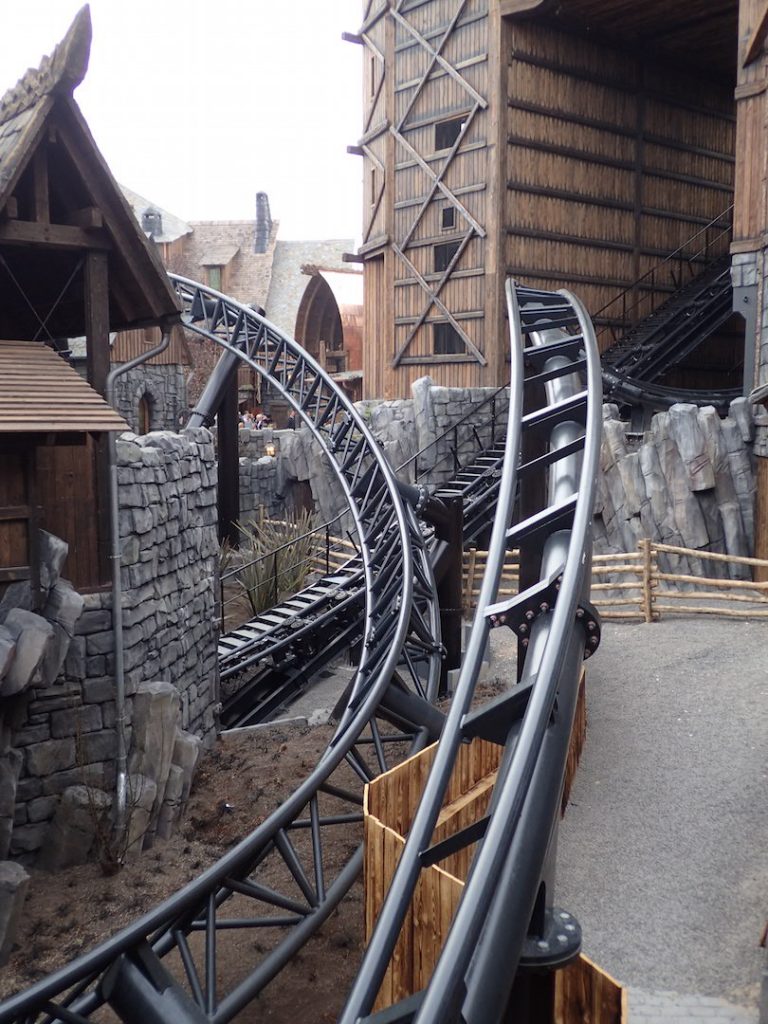 About half an hour later (which is an estimated guess), Raik also opened its gates. We went through a swirling queue and waited there for about an hour. Loading was very slow, mostly due to VIP guests that were filming in between the rides. At this point, we had a different view on Taron but it didn’t pass a lot. There were quite some technical problems with the ride so we saw empty trains passing from time to time. 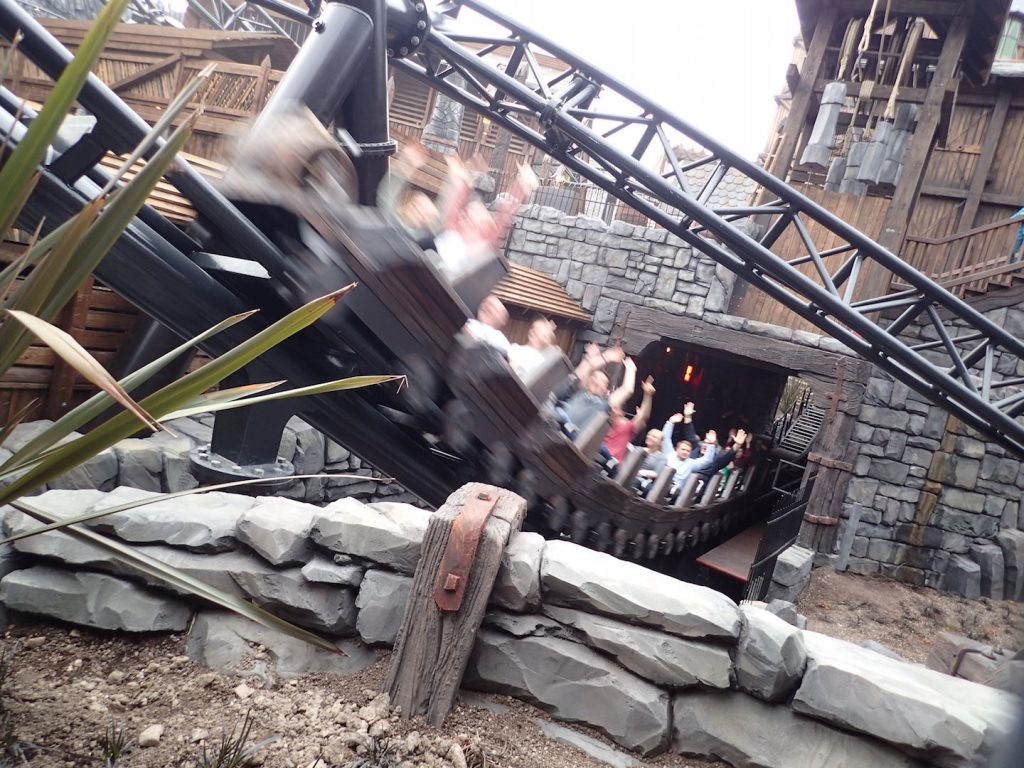 We arrived at the station and they started to work a bit faster. Once the train is ready to dispatch, the side floors go down and the lights in the station turn red. The train goes backwards and once the lights turn green, get ready to see them passing by! Almost time to ride! Fun fact: there is a smoke machine inside the front barrel! 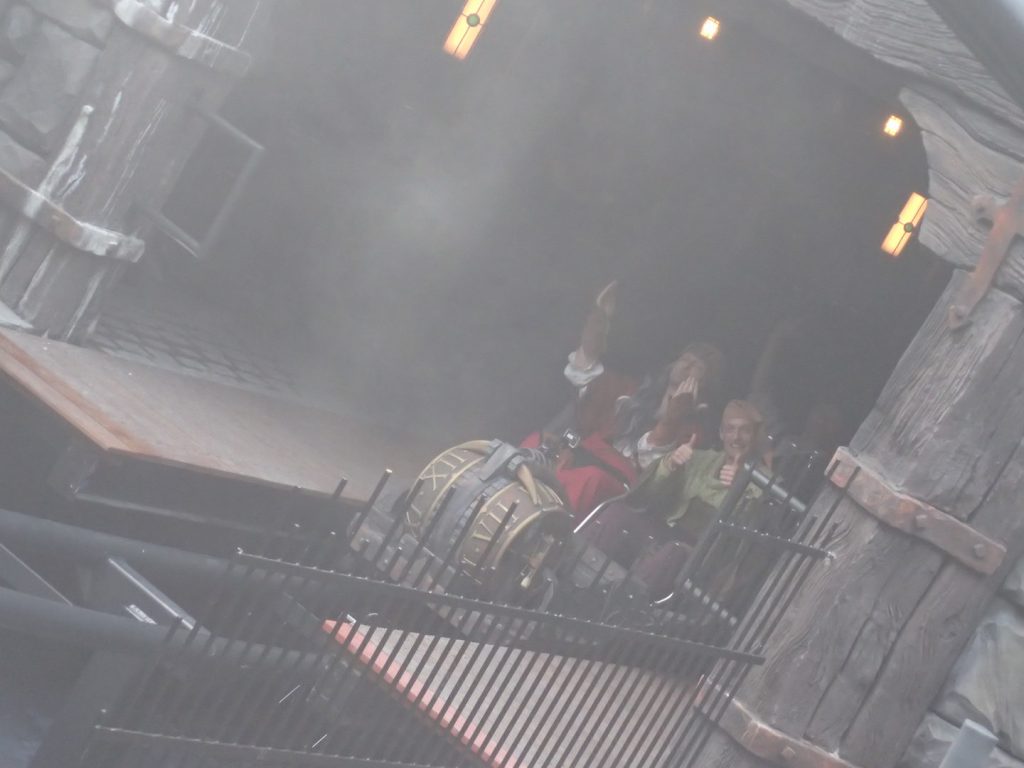 Sitting in the back of Raik, we were ready to ride. The upwards pull backwards was okay but once in the building (which is in fact right underneath River Quest) the music started playing loudly. An excellent idea to build up the release. The fly through the station was okay and after a little bump and curve, you end up in a tunnel with great speed! It was surprisingly fast after which you go up the track and no brakes to block you. The train immediately turns backwards. Here the train has less speed and at the end it almost comes to a complete stop before entering the station. Conclusion: Great family coaster that packs a punch in the tunnel!

Of course Raik is not the main attraction of Klugheim. Since we hadn’t eaten yet, we went for a few of the snacks such as delicious pizza slices, Sauerkraut with Bratwurst and more… This made us fully ready to face the coaster that had been twisting and turning around our heads for most of the time: Taron. 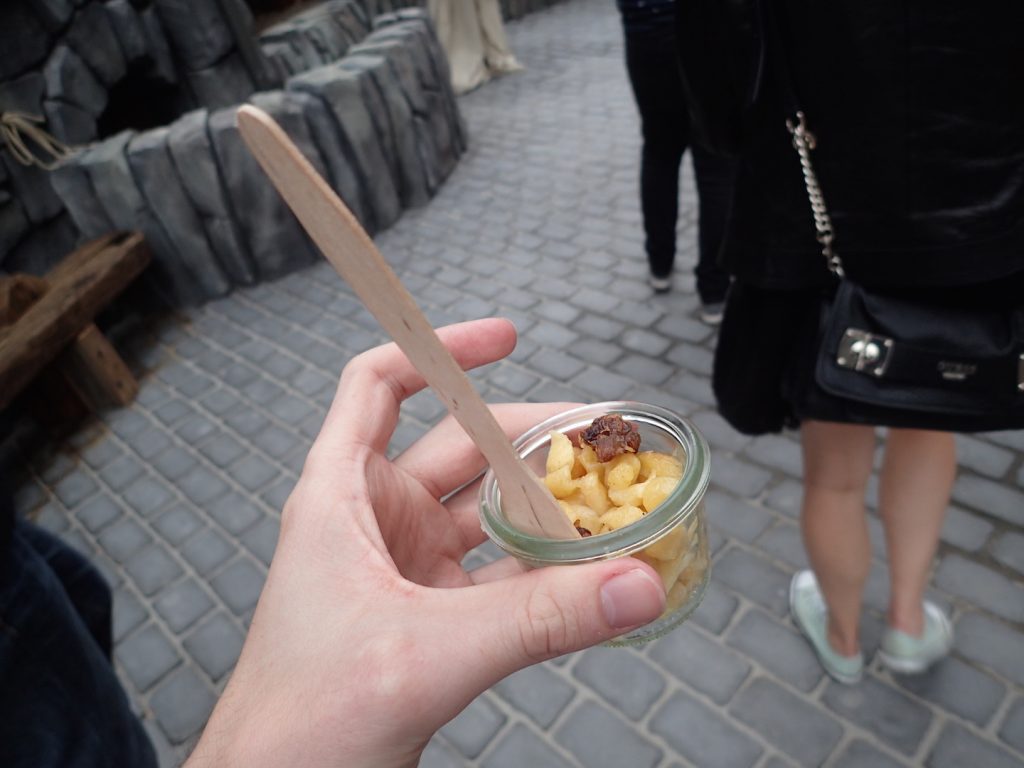 The beginning of the queue passes by a view on the track and the first launch. This sight was already stunning as you see a lot (I mean a lot) of track. Next up is a pretty large queue that’s made to prepare guests for the ride of their lives. Luckily, it wasn’t too long but first row queue was still reserved for VIP guests. We went for the back and after a few minutes waiting, the gates opened and it was time to sit back and relax. These are by far the best Intamin trains I’ve ever seen. You can’t touch the ground once in the seat, but the biggest joy are the lap bars. Fully ready to go, we left the station and stopped at the first launch area. 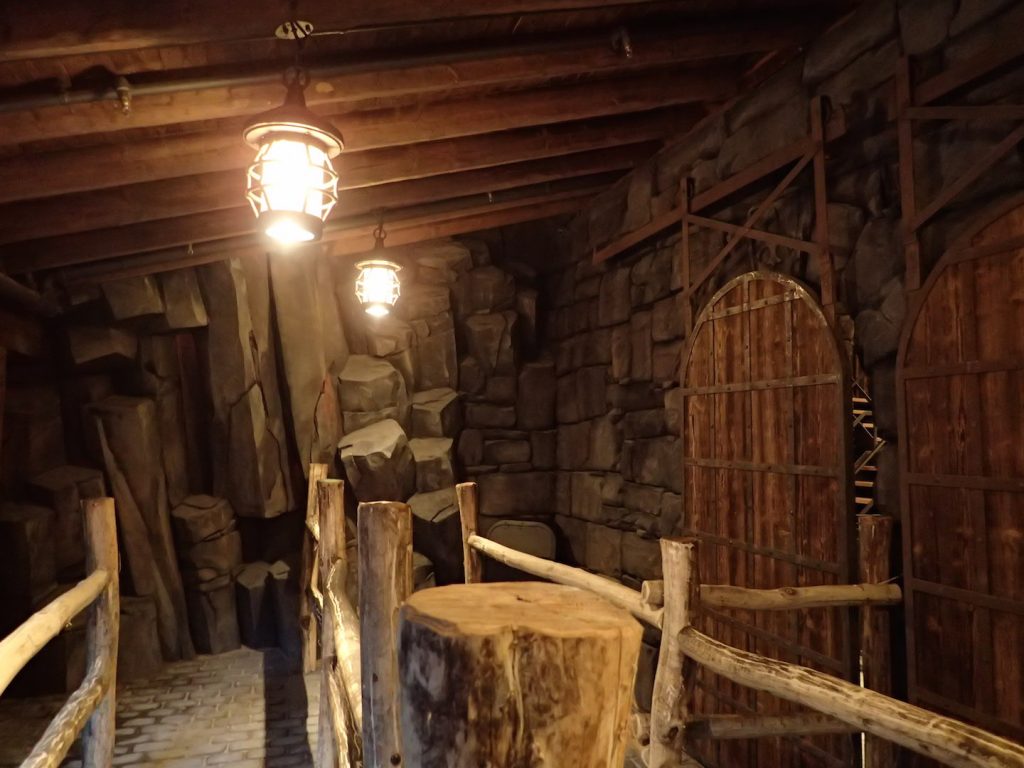 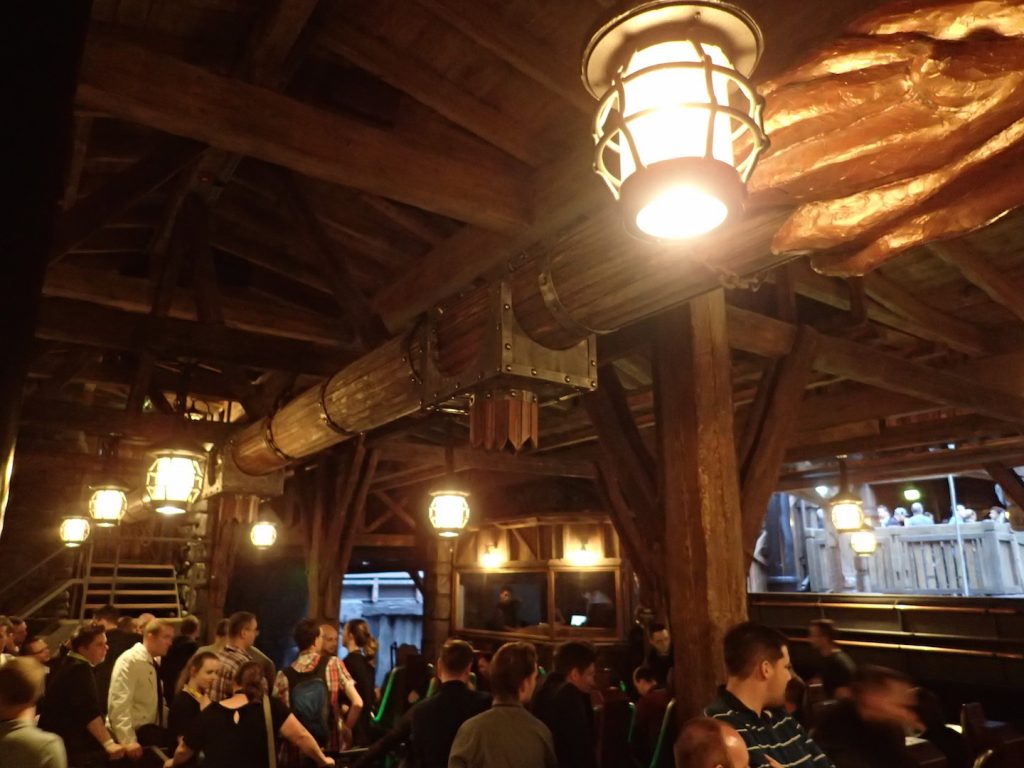 An immediate ‘wow’ is the best way to describe the way the train runs through the first curve. But then all hell breaks loose when you hit the air time hill and go downwards in a forceful helix, that twists at the end. Here I could not resist to scream and I’m used to quite some coasters. 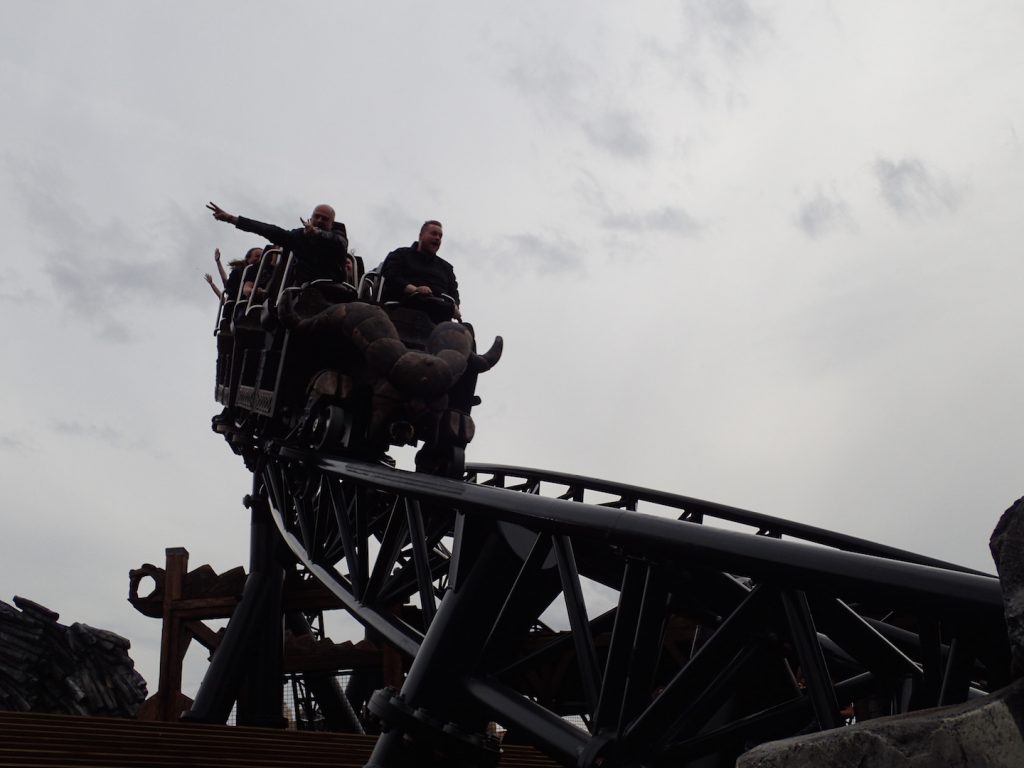 The next part is a bit smoother to fully enjoy the area of Klugheim. This way you can also prepare for part two of the intense ride. After going through half of Klugheim, a serpent-like twist takes you to the second launch. I’ve hear it a few times already because it makes the sounds of a motorcycle pulling up, and that’s exactly how it feels. 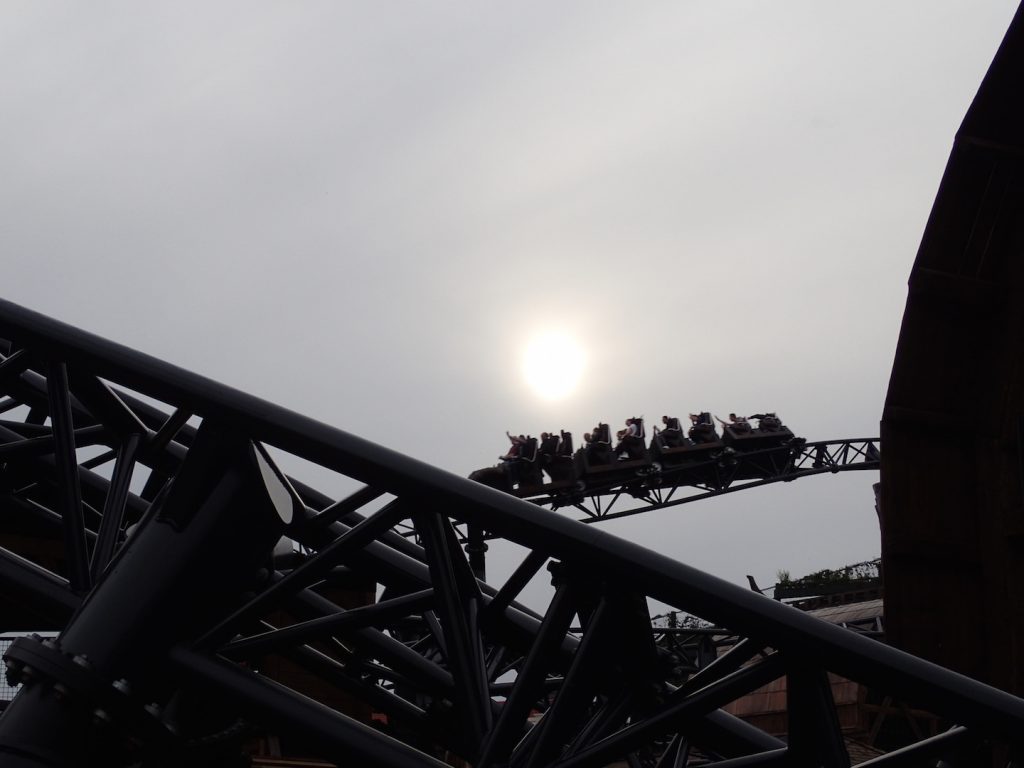 The powerful launch takes you up passing the waterfalls to the highest point of the coaster which gives a nice view of the area and even the park. And you have about one second to enjoy this, cause Taron has a lot more in store. The curves and over banked turns that follow are just so forceful, especially with the lap bar. The combination of the speed, the layout and the incredible area are simply unique and I’ve never experienced anything like it before. 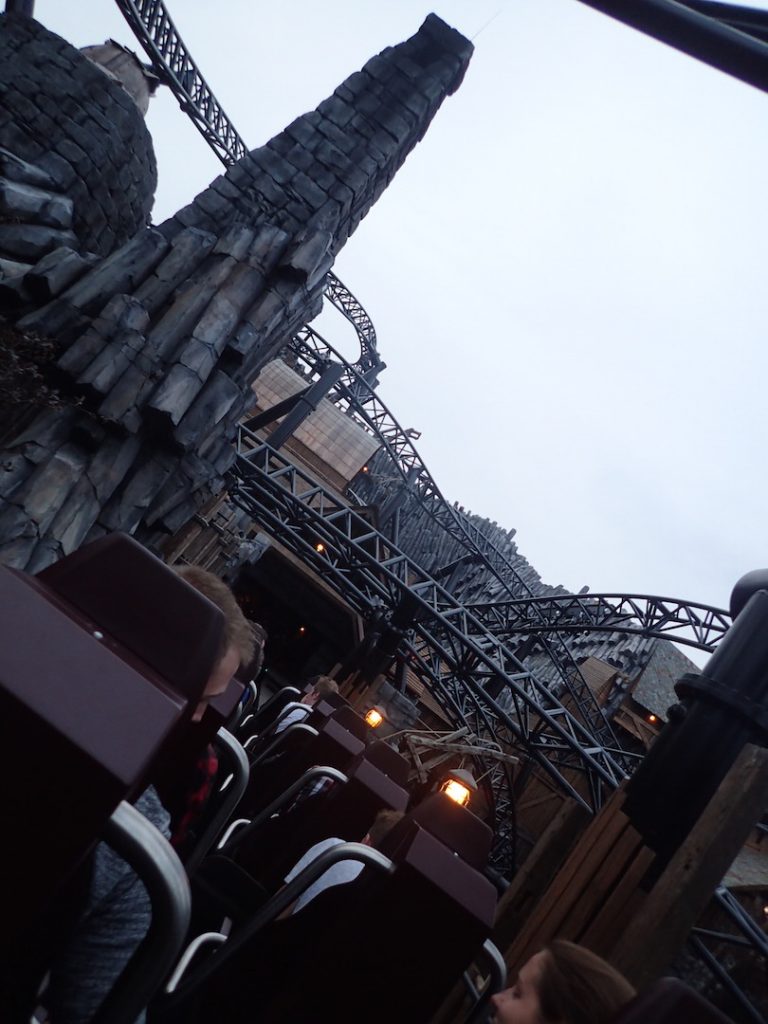 Right before the end there are two small bunny hops, but you can’t really feel any airtime here since they have brakes on them. You might wonder: why would they do that? Well, the final helix is the answer. Also here you have one more punch before hitting the brakes. I was honestly in shock after my first ride. I expected a good coaster, but this was just amazing.

In total, I rode it four times, including the front seat. The experience is good both front and back seat, but personally I preferred the back. In the front, you felt the airtime hill a bit more, but back seat, the g-forces were stronger in the curves. 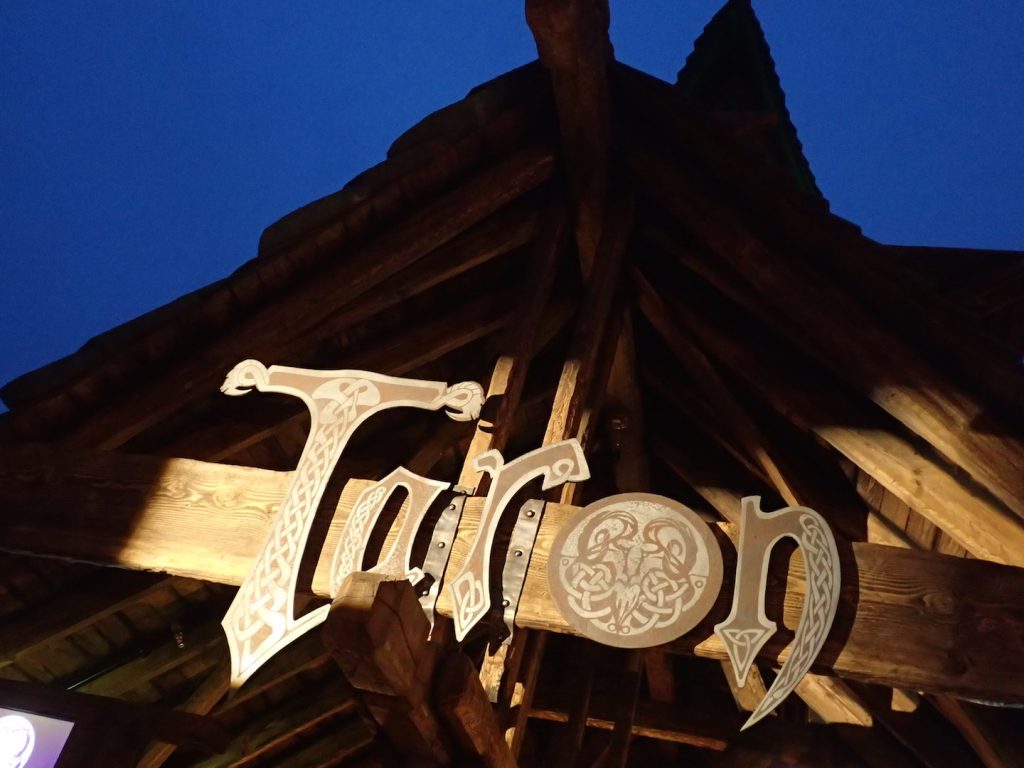 As mentioned before, there were some loading delays from time to time. It’s of course the first time that it’s open for a large group of people, which naturally is a challenge. With four trains on the track, capacity shouldn’t be a problem. That night, the queues were a bit slow in those ‘technical issue’ moments, but once they found their rhythm, it should be fine.

One unique part of the night was that it stayed open past 11 pm. This means that there was a first rare opportunity to see the park open at night, and especially Taron and Raik! Taron in the dark is even better, especially the second launch which is beautifully lit in red. 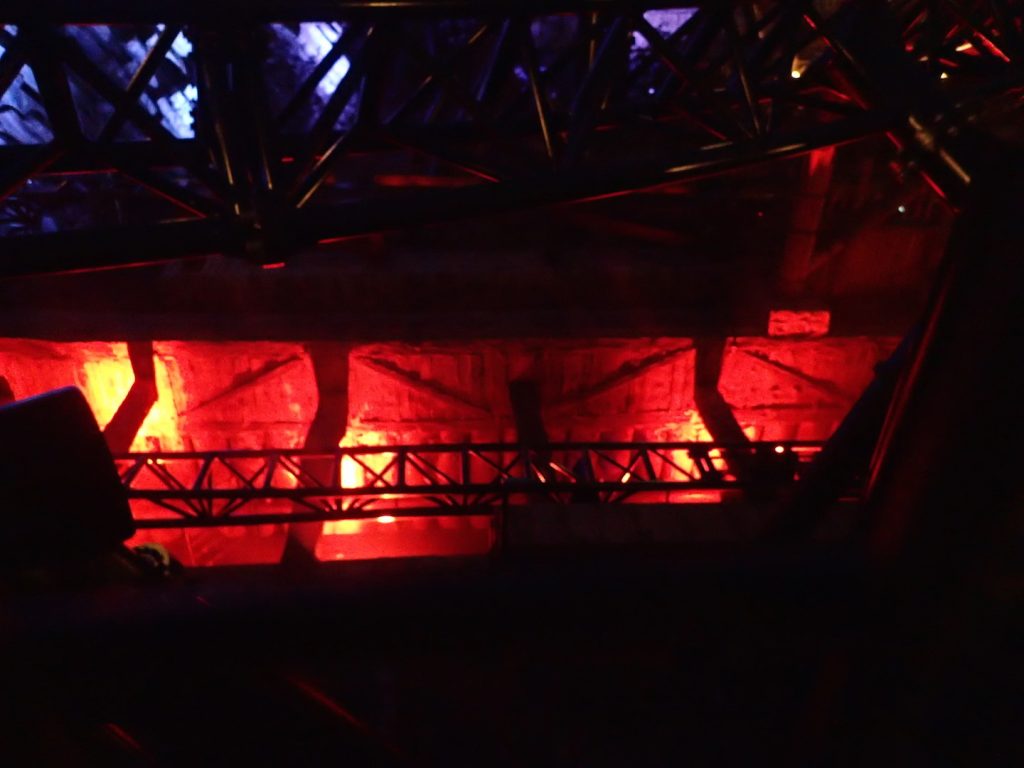 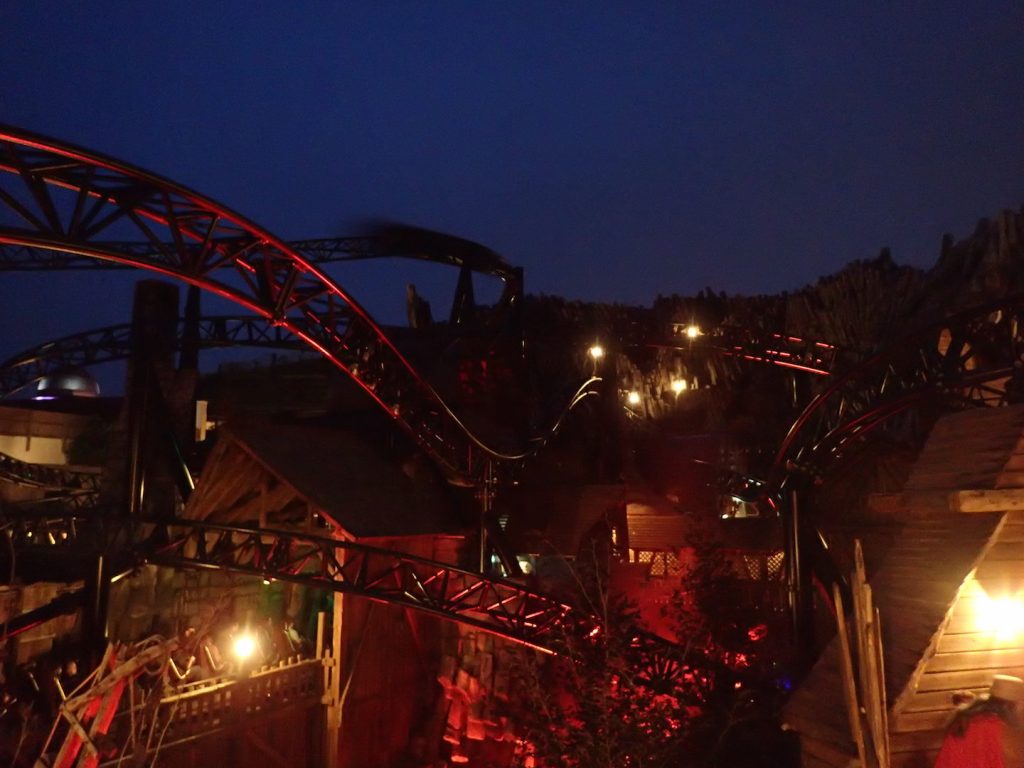 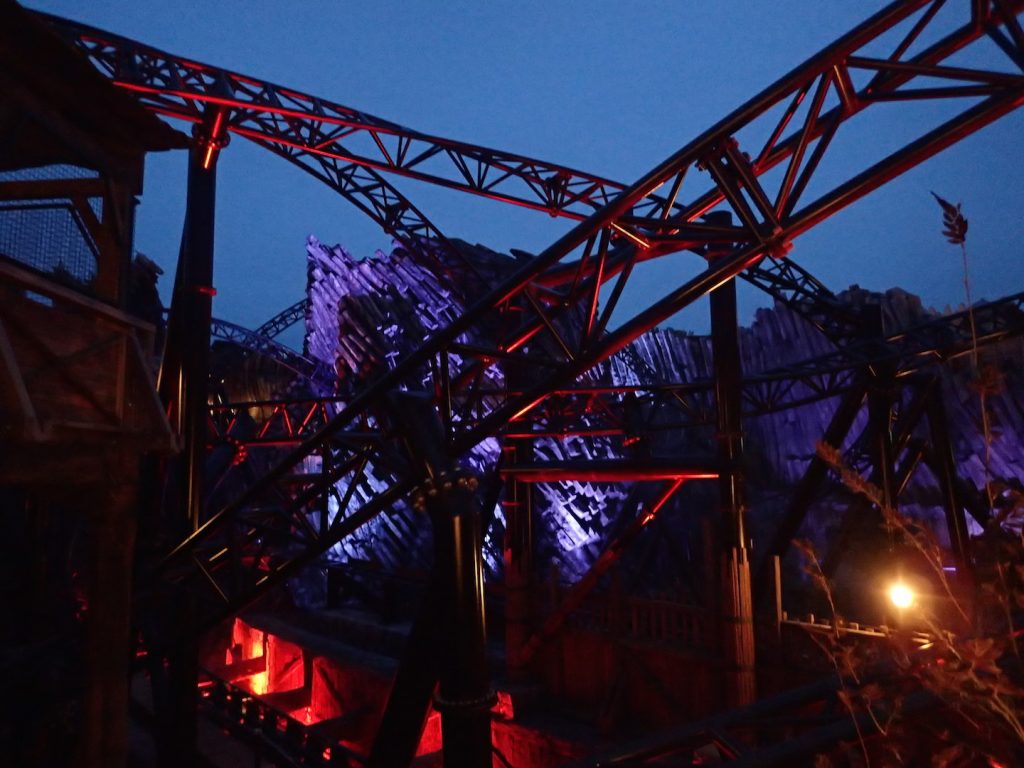 Besides the coaster, there was the new restaurant ‘Rutmor’s Taverne’ that looked stunning. It’s a new table service restaurant but only some VIP’s were allowed inside. From the outside and peeking through the door, the style of the area looked beautiful. 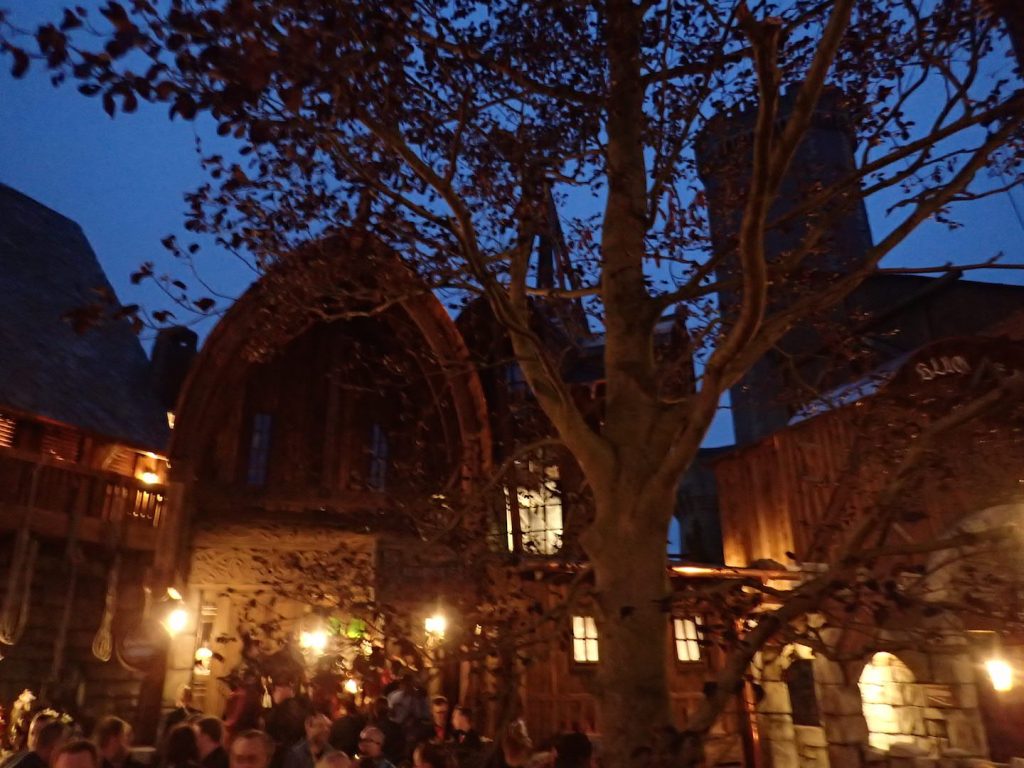 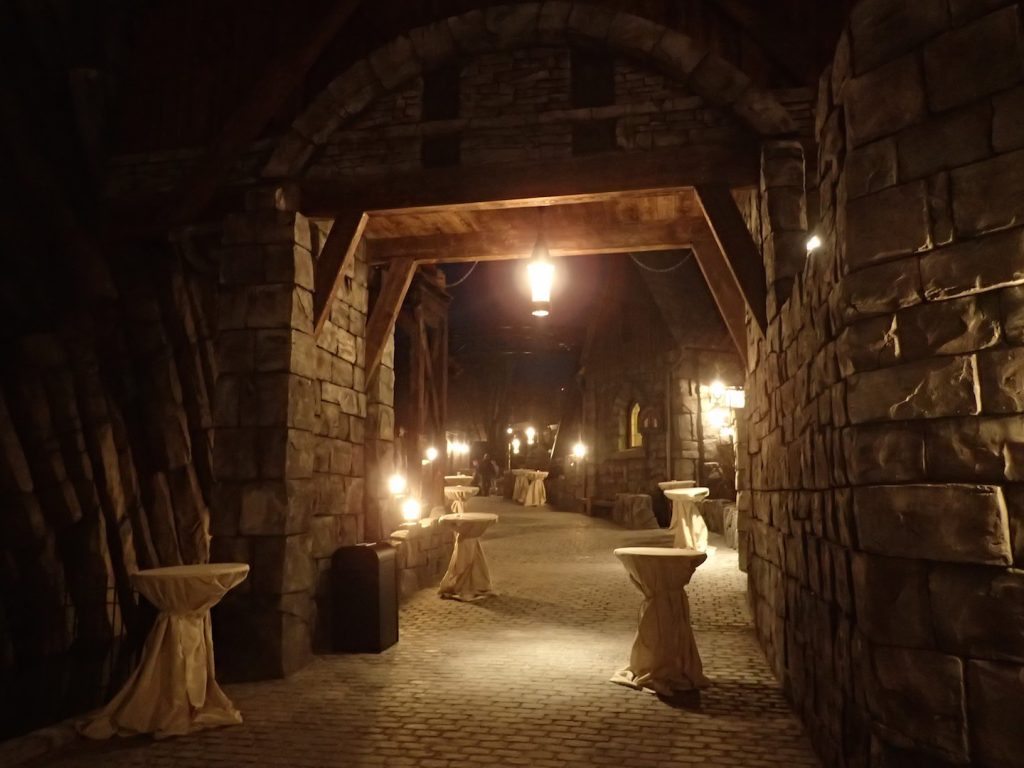 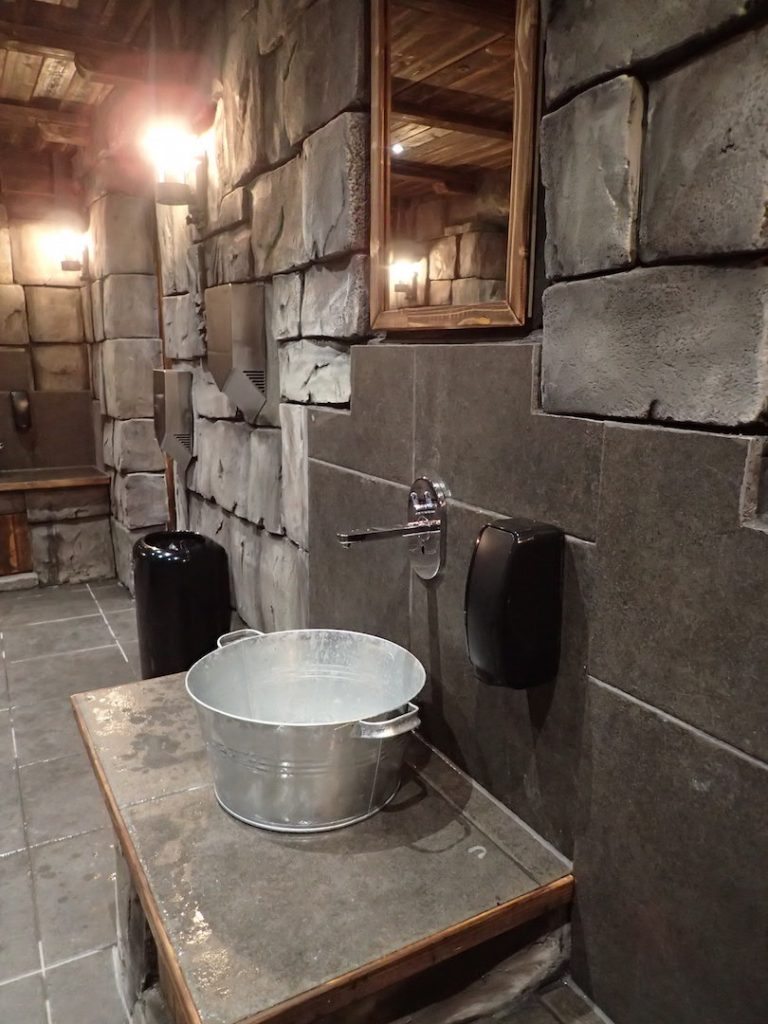 The characters in the area are all personalized and unique. Phantasialand has them almost permanently in most of their areas. Wuze people in Wuze Town, dapper people in Alt Berlin and so villagers in Klugheim. It really adds to the atmosphere, which was of course essential on an opening night like his one. 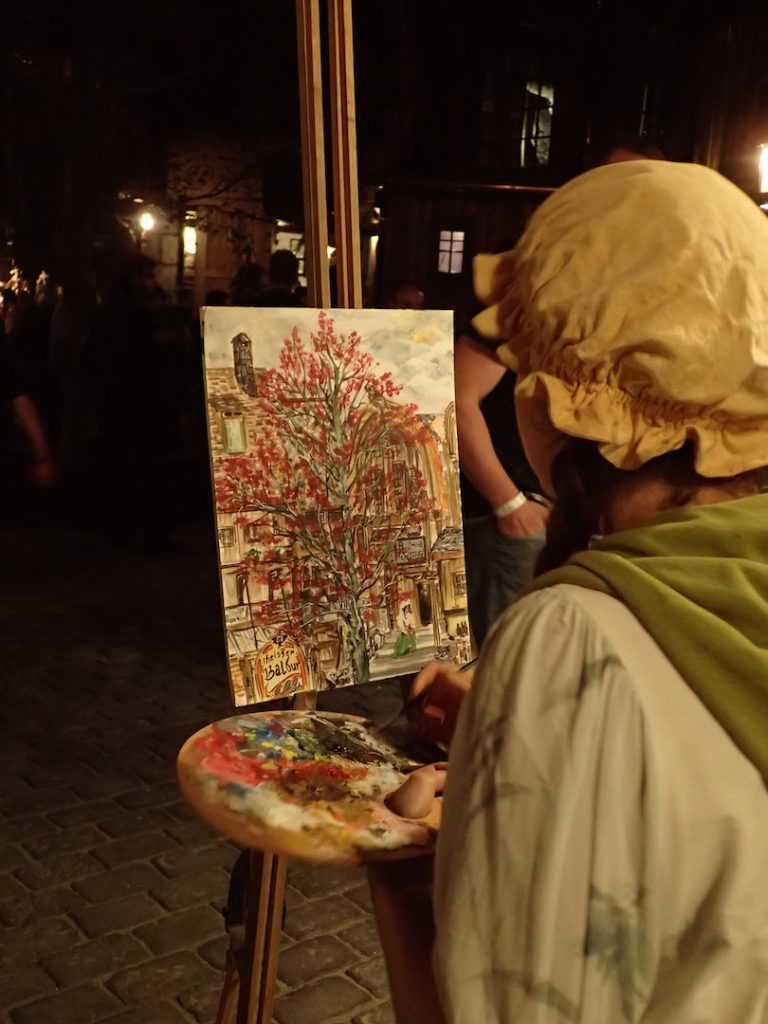 This all leads me to say this: you need to plan a trip to Brühl this summer. Coasters addicts will love Taron for sure cause it simply has it all: force, air time, fun, theming and uniqueness. If that is not enough, families will enjoy Raik both forwards and backwards. If you are a fan of Game of Thrones, The Lord of the Rings or just the middle ages in central, you’ll love to stroll in this incredible new area. And don’t forget that it includes Mystery Castle and River Quest! 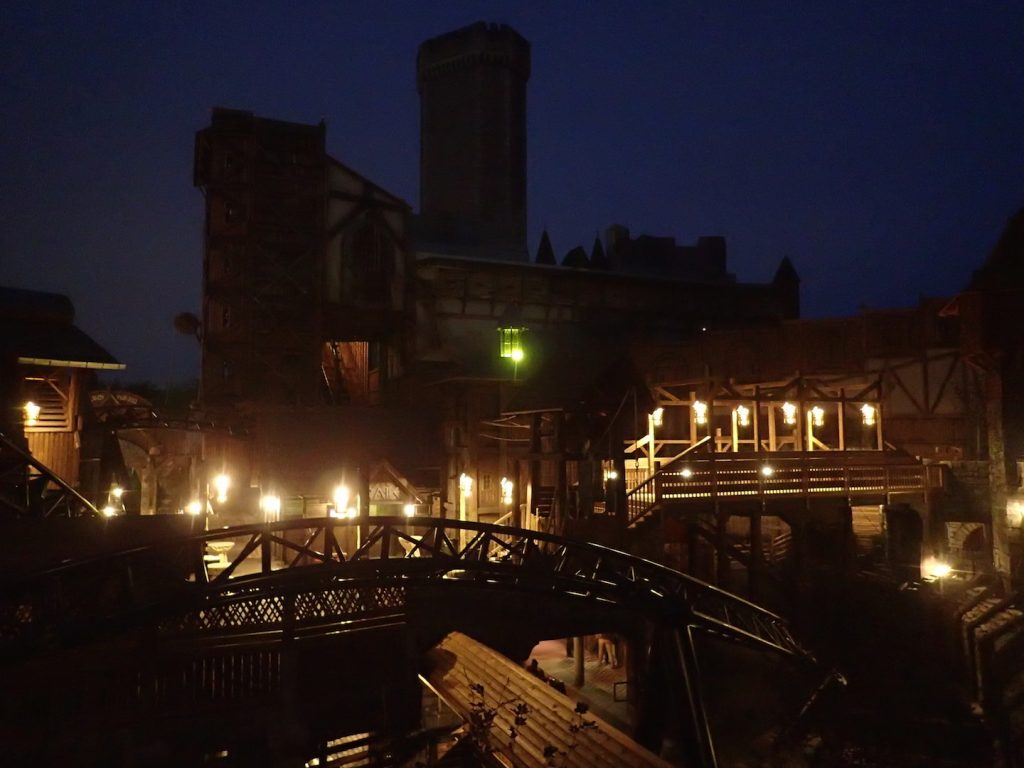 Thanks so much for reading our Opening of Klugheim: Taron and Raik article. Please keep in mind, all images found on this site, unless otherwise stated, are owned by Coaster Kings! Sharing them is fine, but only if credit to coasterkings.com is given!