Alexander: ‍Welcome all to our first-ever Ohio Coasters Top 10 article! We’ll be counting our way down to our pick for the state’s best coaster; make your guesses now!

To know Coaster Kings is to know that we have very particular tastes when it comes to ranking coasters – we often base our opinions on how close a ride comes to performing at its maximum potential (in terms of both design and functionality), as well as how gracefully a ride has aged. We value our classics here at CK – building a great ride is one thing, but maintaining one is a different story.

Let’s dive in, shall we? 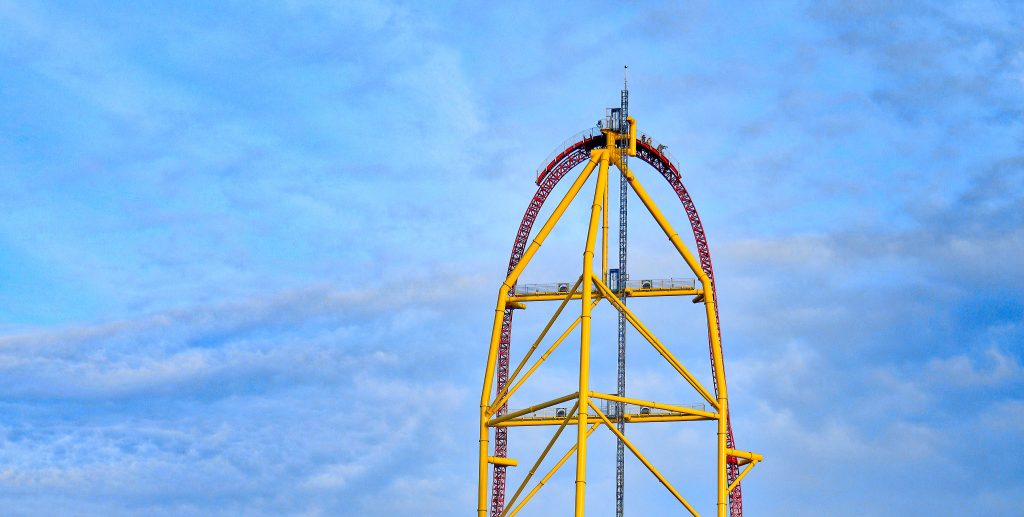 We begin our countdown with Cedar Point’s most challenging coaster to overlook – both figuratively and literally. Top Thrill Dragster might be a 1-trick-pony, but a trick of this caliber can’t go without mention – and while we prefer its fraternal NJ twin for its improved leg room and better rate of acceleration, Dragster’s lapbar-only trains will forever set it apart.

Raptor may not be the best example of B&M’s inverted pedegree, but the 26-year-old coaster oozes charm and (to its credit) captures the design quirks of a fledgling manufacturer earning its wings. The “karate chop” into the final brakes isn’t exactly fetching for those who were raised on B&M’s more precise designs, but it’s a small blemish on an otherwise stellar ride. 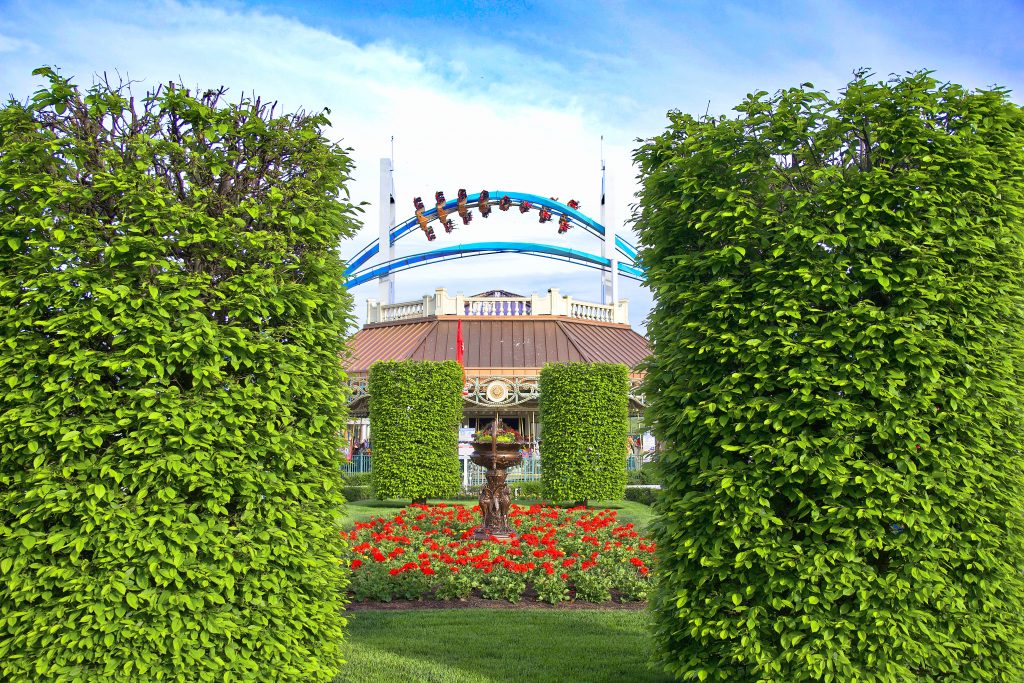 Landing on the other end of the B&M spectrum from Raptor is Gatekeeper, an exceedingly well- (or perhaps over-) engineered hood ornament festooning “America’s Rockin’ Roller Coast.” Despite being a flagship ride at one of the world’s most fiercely-defended parks, the breadth of criticism against Gatekeeper is about as wide as its wingspan. We can’t relate to the hate, however; aside from the ride’s sterile immediate surroundings, there’s not much we’d change about this noble bird. 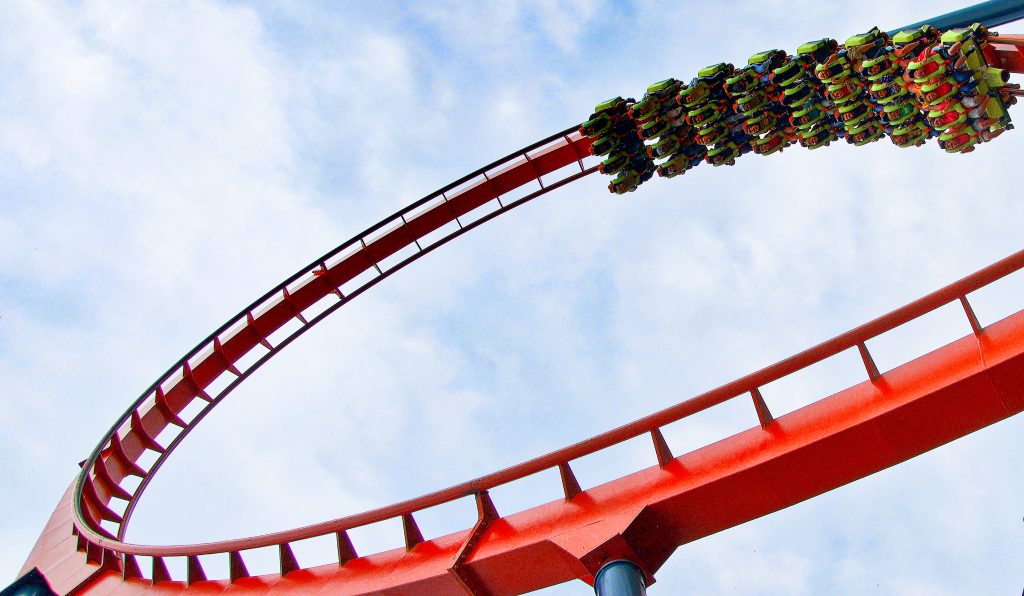 If there’s two things we’re suckers for here at Coaster Kings, it’s 1990s design integrity and “appropriate violence” – a level of roughness that straddles the line between intensity and discomfort. An unlikely champion of these characteristics is Rougarou, the troubled  20-year reimagining of Mantis that crashlanded somewhat beyond the general public’s blessing, yet squarely on our intersection of appropriate violence and sustained 90’s-ness. If only fixing CP’s other orange B&M was so easy… 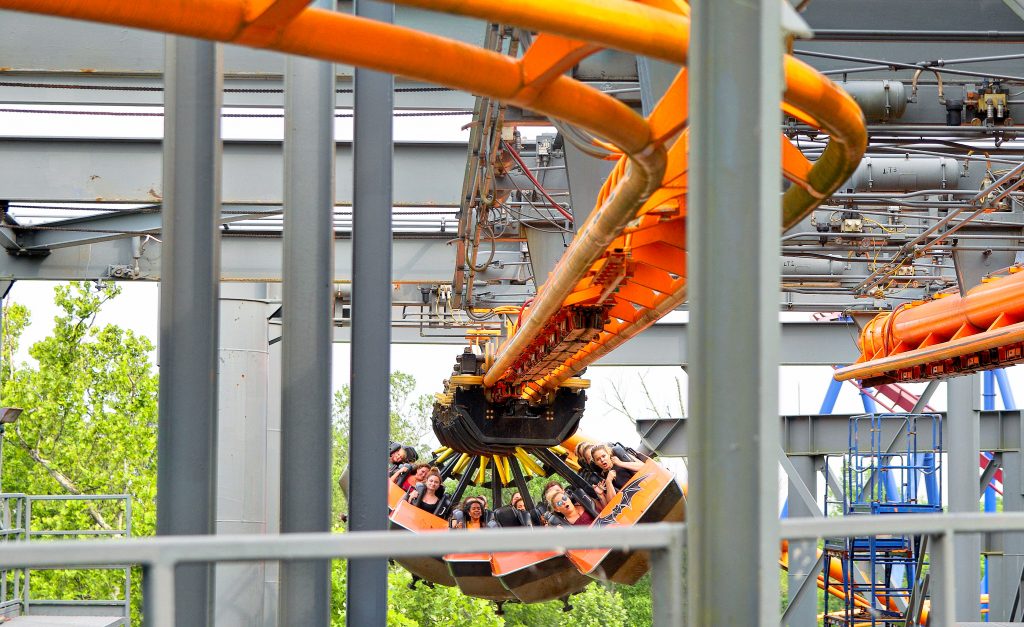 Here’s where things get interesting: there’s a 3-way collision for top billing at our preferred Ohio megapark, Kings Island. This wasn’t the plan, but the Top 10 wound up looking like an Oreo – the cardinal KECO park serving as the creamy center. Ranking Cedar Point coasters was a lot easier for some reason.

Anywho, Bat finds itself first up on our Kings Island features, though placing it outside our Top 5 wasn’t unanimous – as the park’s “biggest surprise” for the public and enthusiasts alike, it’s hard giving the petite creature anything less than top billing. Even Bat’s near-identical predecessor at Canada’s Wonderland doesn’t shred its 2,352ft of track with quite the same urgency. 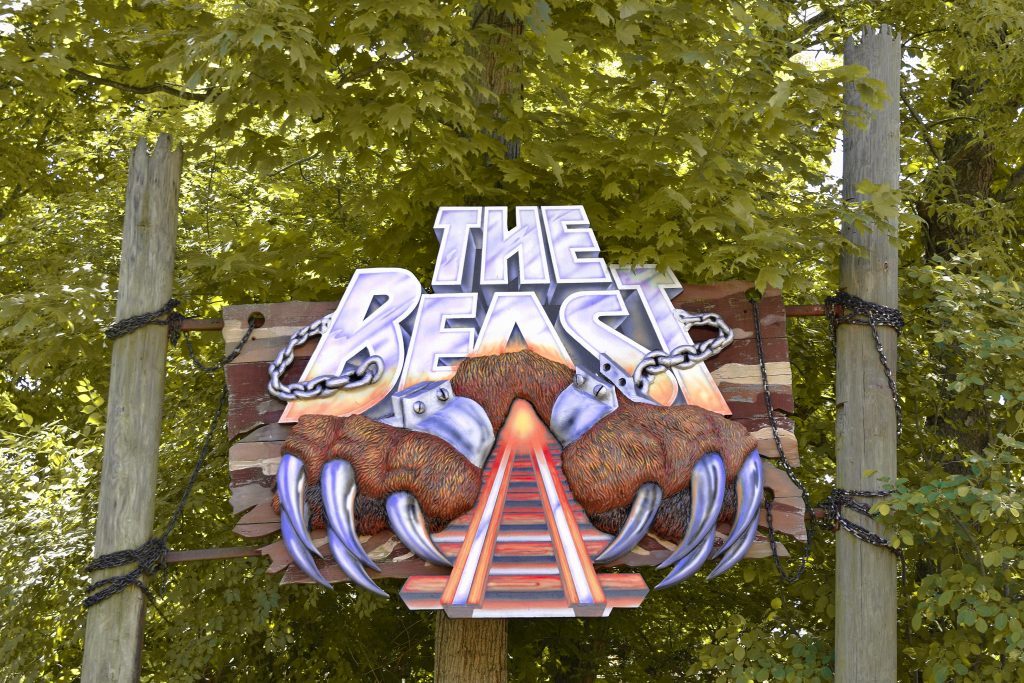 While the Bat boils down to a mere 45 seconds of action, bread-and-butter Kings Island coaster Beast holds its riders hostage for about as long as your average Pink Floyd song. Is it the better ride of the two? Maybe. Is it the more significant of the two? Probably. Even as opinions of the ride ebb and flow with each passing season, Beast’s lingering appeal serves as a fitting reflection for a ride of such excessive length. 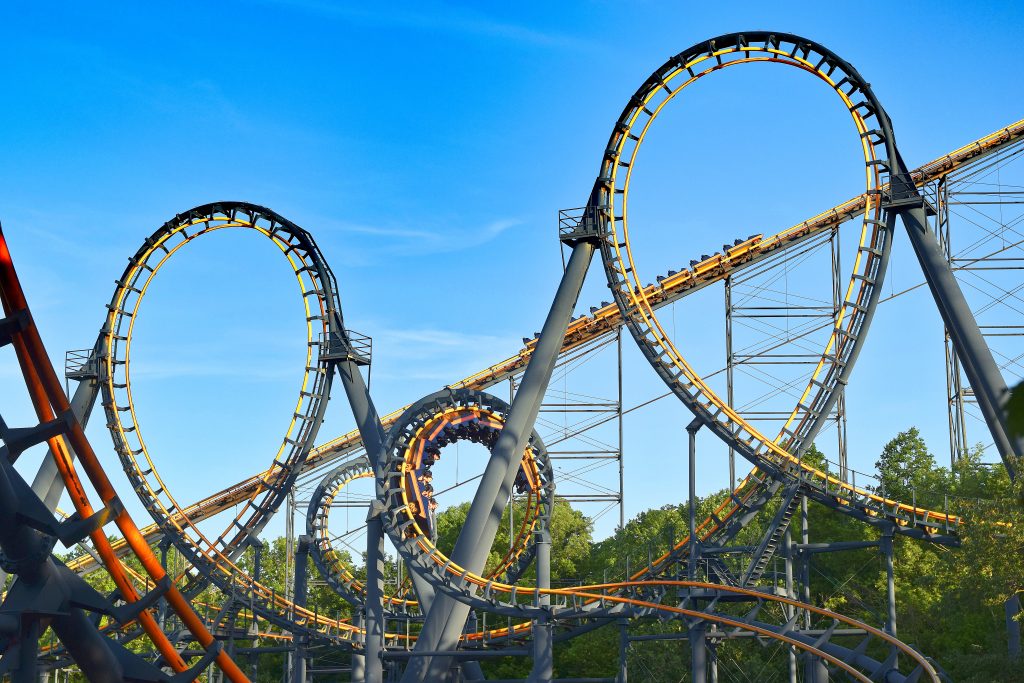 If we really had to ask ourselves what ride “makes,” Kings Island, it’s hard for us steer away from the mental image of Vortex’s verging-on-grotesque display of acrobatics, all piled-up on each other like scribbles on a napkin. The record-breaking looper reads like a favor to Kings Island from Arrow following the OG Bat fiasco (and if “new” Bat was any indication, clearly all was forgiven), and remains the park’s only other operating example of Beast-level showboating. For now. 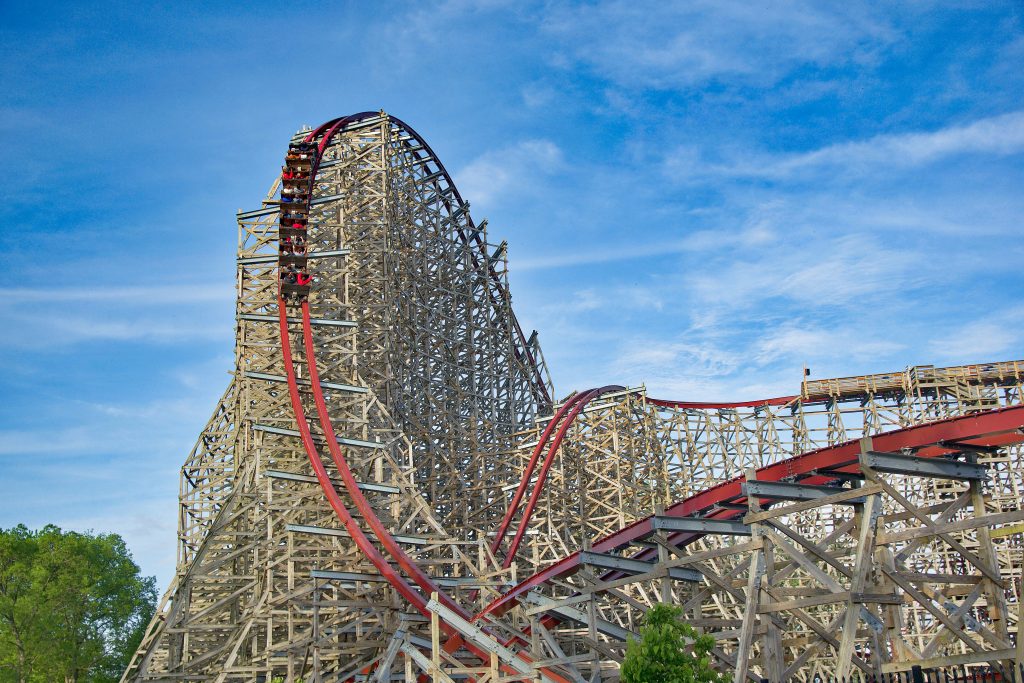 At this point, it shouldn’t come as a surprise that modern coasters must work overtime to earn their keep with us. This brings us back to Cedar Point, and the 2nd of 2 coasters on this countdown that actually opened this decade. Many will argue that a bronze showing for Steel Vengeance is insufficient, but for us it was a fairly generous move (I, personally, wanted it below the KI-creme center, but it’s not all about me).

For better or for worse, Steel Vengeance is the RMC Cedar Point deserves: massive, garish, exhausting, and roughly equal parts unique and contrived (only the ride’s 1st half stands out – the rest is Iron Horse paint-by-numbers). Based on our rides, we admitted to ourselves that we liked it more than we thought we would, but not as much as we wanted  to.

At no point in this process were we more divided than on how to flesh out this list’s Top 2; we hemmed and hawed and argued and advocated until we ultimately settled on giving the top spot to the “more on-brand” coaster, leaving Maverick as the maid of honor. Aside from the dubious billing as Cedar Point’s only  coaster that’s neither over-, nor under-rated, Maverick’s standout quality is a delightfully weird, two-stage layout that paved the way for an enduring trend of multi-launch coasters. 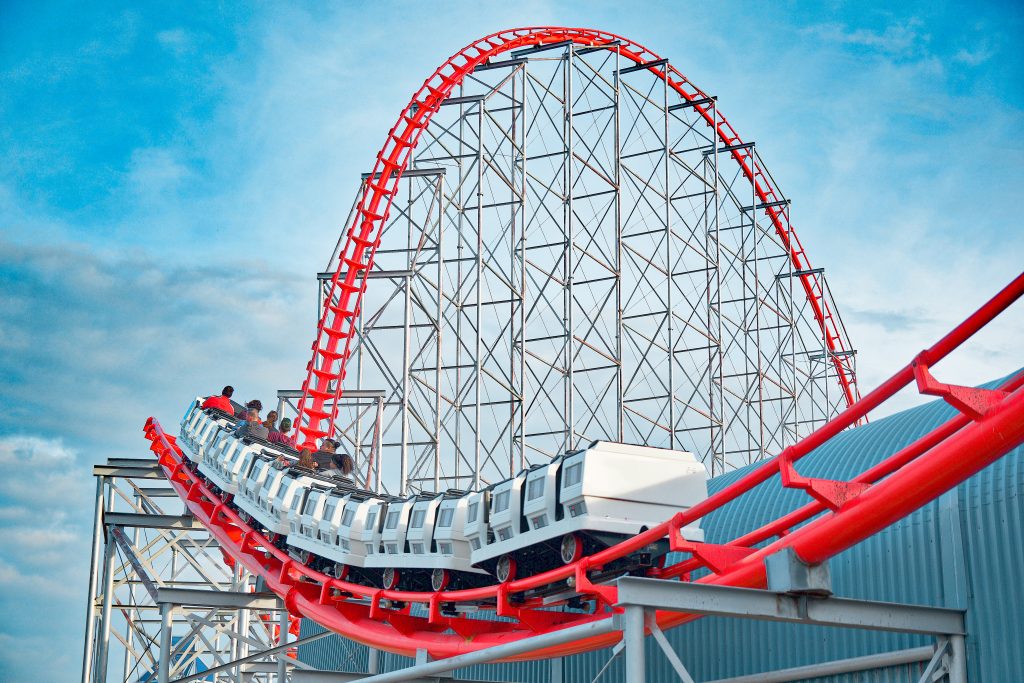 Who else but Magnum? How could we not give the 30-year-old Arrow airtime archangel anything less than the sun, the stars, and the moon? (I mean, obviously you just read in the Maverick section that it wasn’t the easiest choice, but I digress) It just feels so right, now that we’re here.

Not every ride occupying such a monumental notch on the industry time line is this sensational in its own right (after all, rides famous for breaking records aren’t always famous for being great rides), and even after 30 years of service and handfuls of post-debut tweaks, Magnum is nothing if not a kismet  demonstration of sticking the landing on the first try. Extra points for 2019 enhancements like tunnel effects and pool noodle lapbar embellishments for the tender-thigh’d enthusiasts among us.

We hope you enjoyed our Ohio Top 10 (Millennium Force fans, we hope you can find it in your blue-bleeding hearts to forgive us). Be sure weigh in on our social media platforms!

Of note, if you haven’t checked out our Cedar Fair Parks Top 10, check it out here!