Alexander: Our second new park of the week (for us) is Arkansas’ regional park, Magic Springs! There’s a great collection of oddball coasters here and we can’t wait to check them  out!

Things are a little more relaxed here than at Frontier City – but with Magic Springs’ biggest draw (appearing) to be the waterpark, where masks aren’t required, the general lack of mask policy made sense. 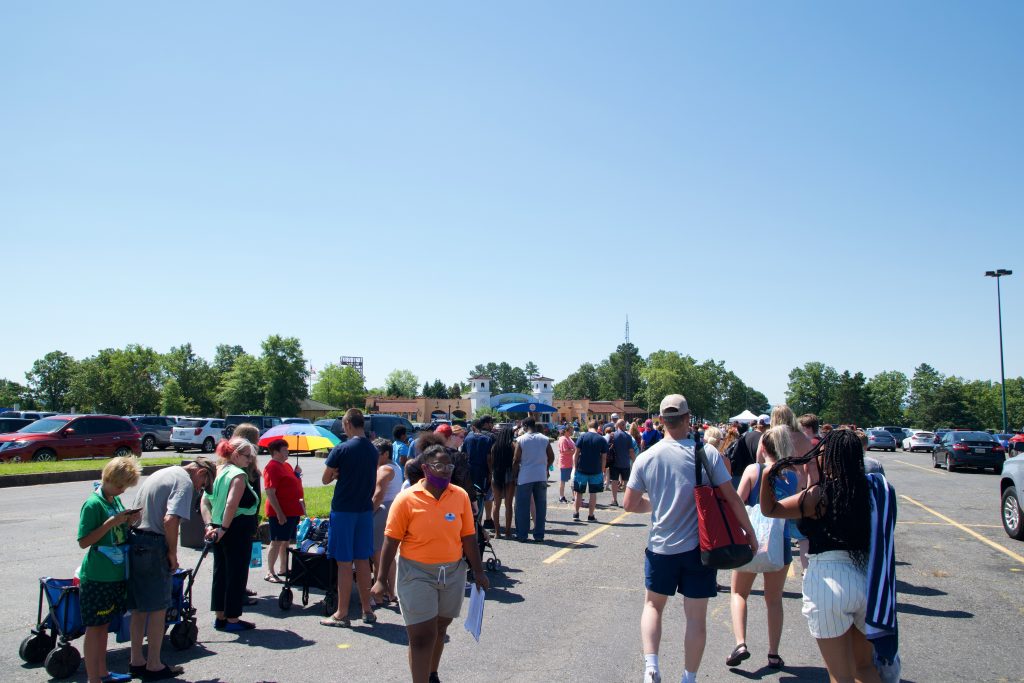 We were a little disappointed by this tent – it’s not actually for temperature checking, but for grouping guests before they cross the street to the park’s entrance. Not really sure why. 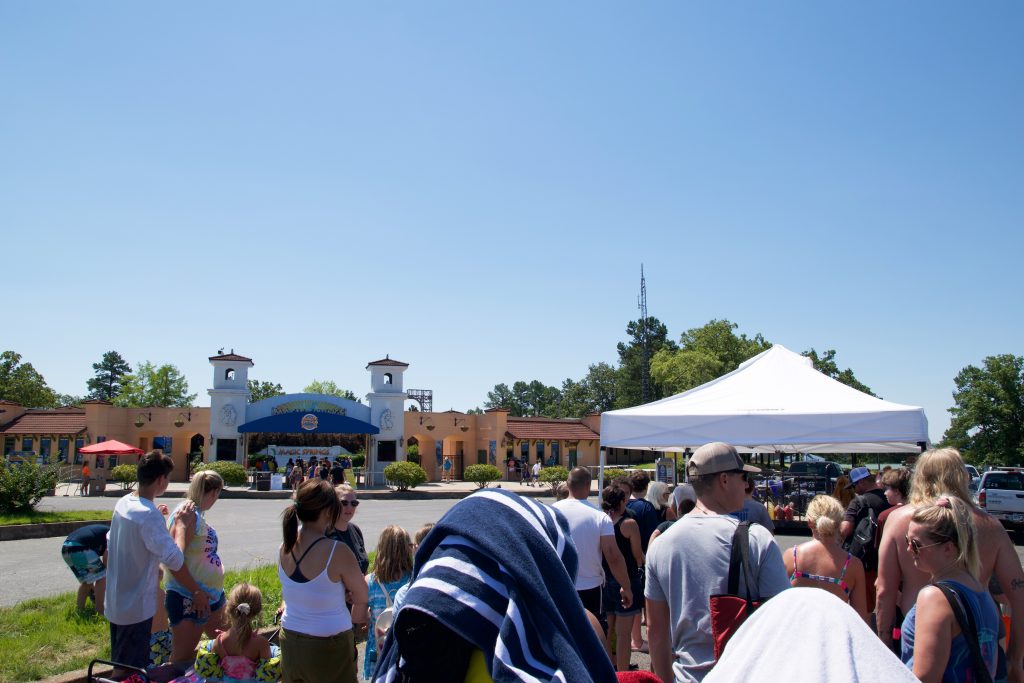 Nothing says “magic springs” like a fountain of what appears to be Blue Raspberry ICEE syrup mix. 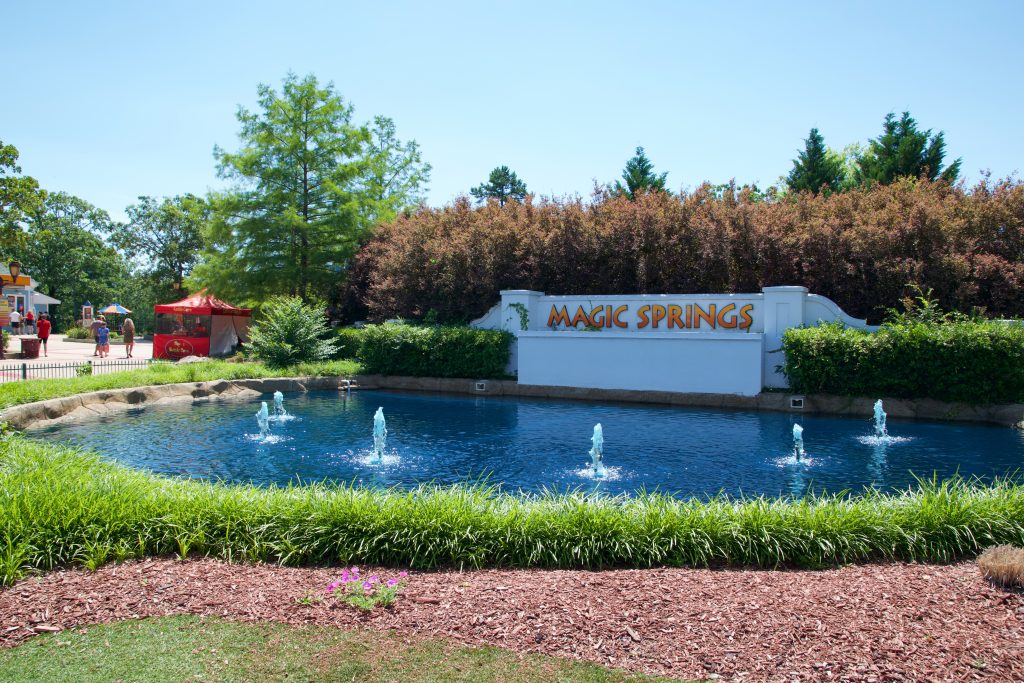 This park surprised us. There’s a great mix of manicured landscaping and impressive natural foliage. 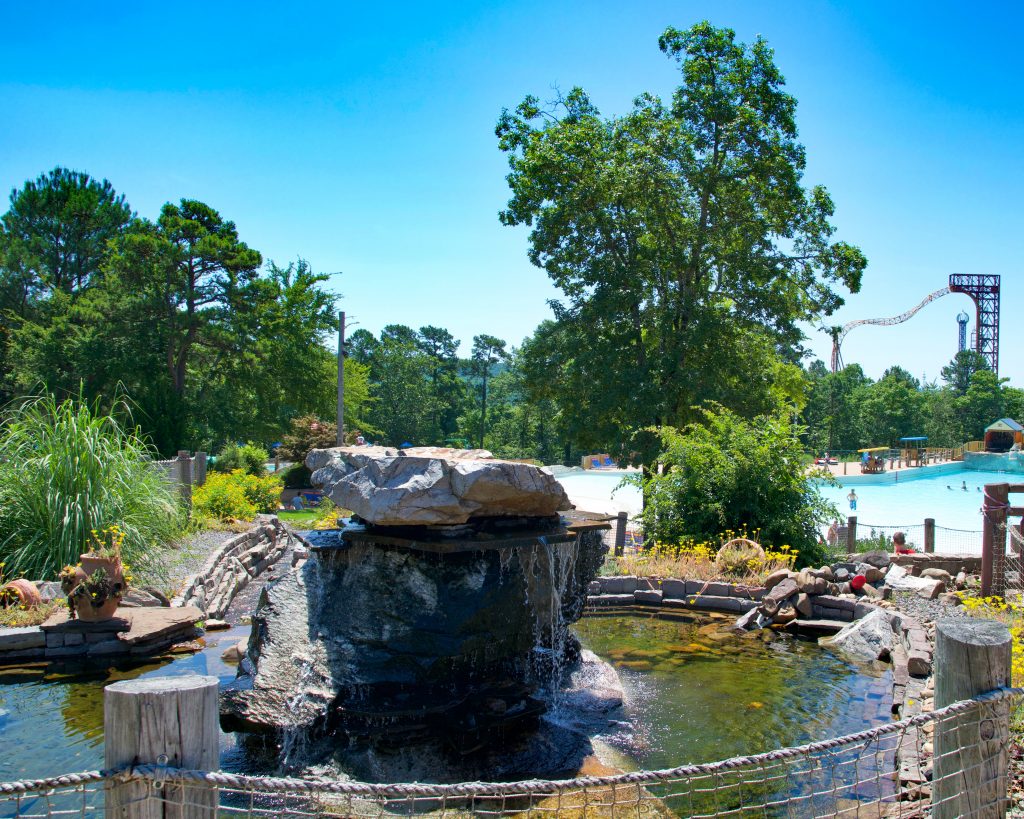 Most rides were open, but the sky coaster and log flume were down for the count. 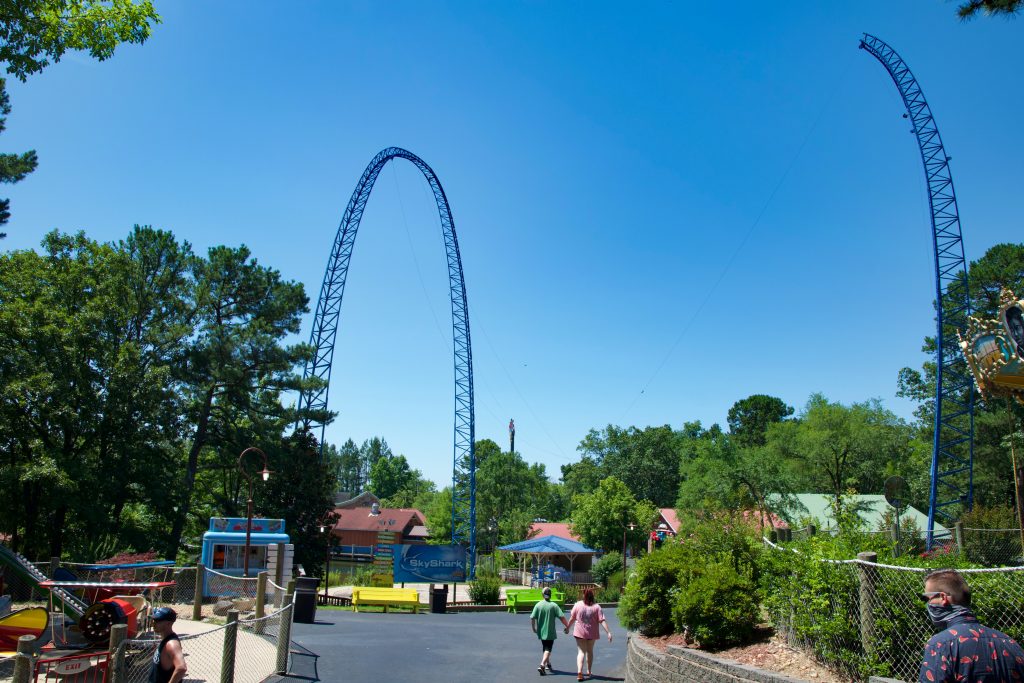 First stop: Gauntlet. But more on that later. 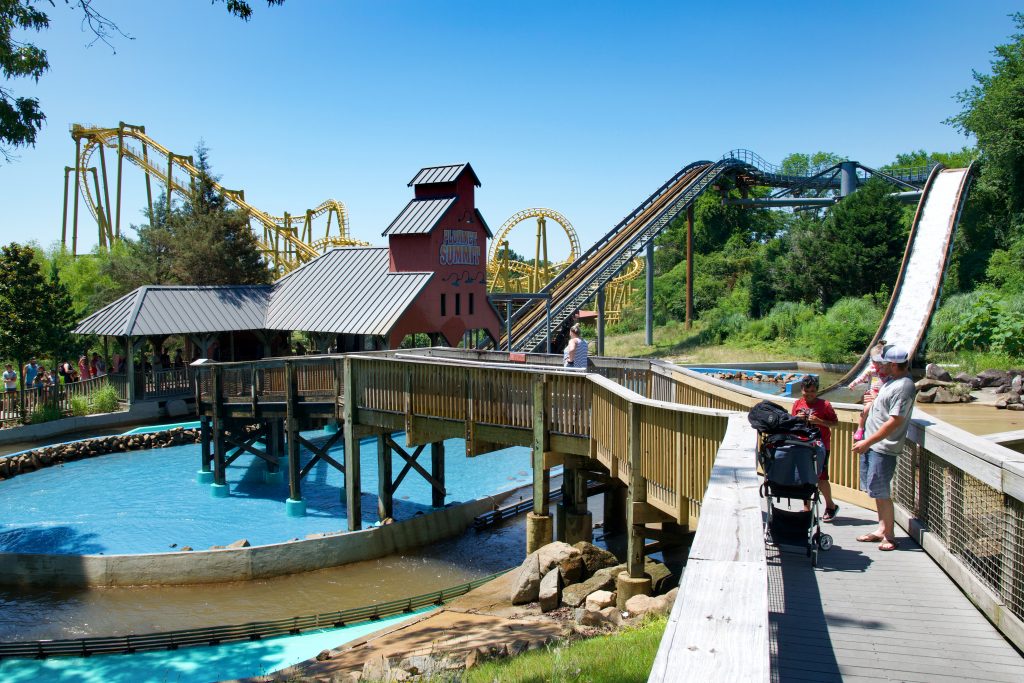 After getting our Gauntlet credit, we saw X-Coaster testing and made our way over. 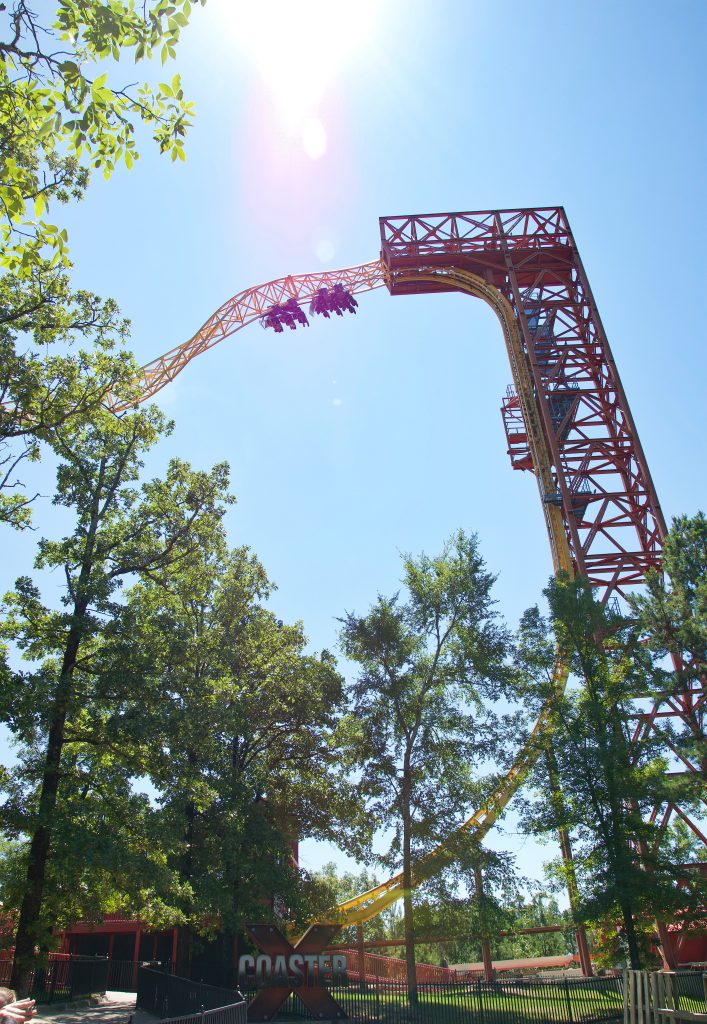 We also saw the nearby Big Bad John, which was actually the coaster we’re most excited about. 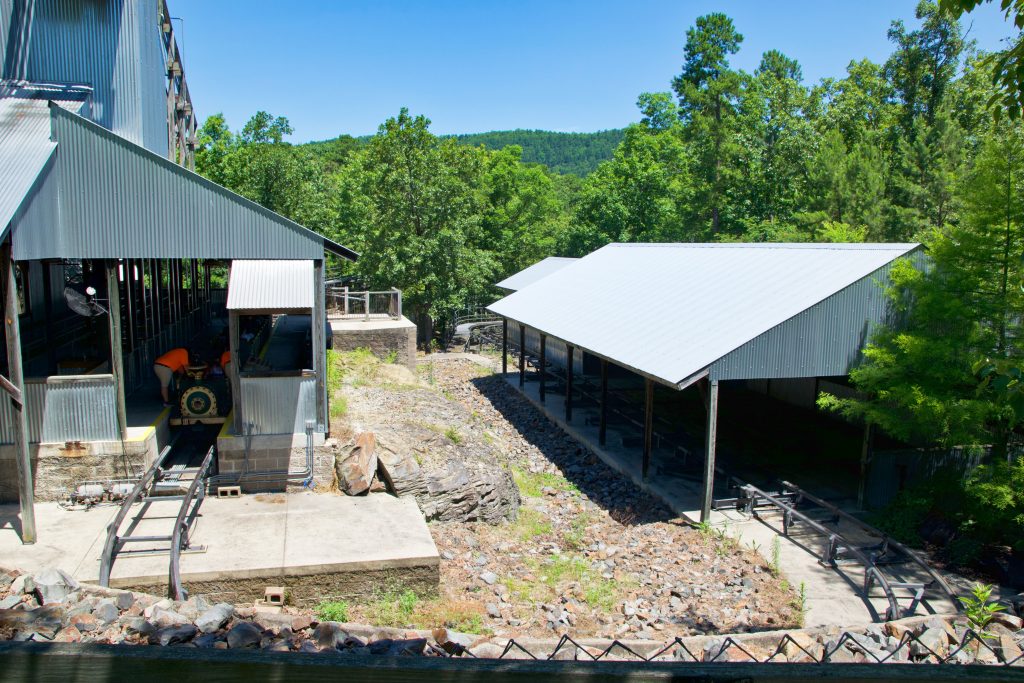 X-Coaster, as rare and finicky as is it, was the highest priority once we saw it running. It’s an interesting ride, and a cool credit to have, but perhaps not the most pleasant experience. 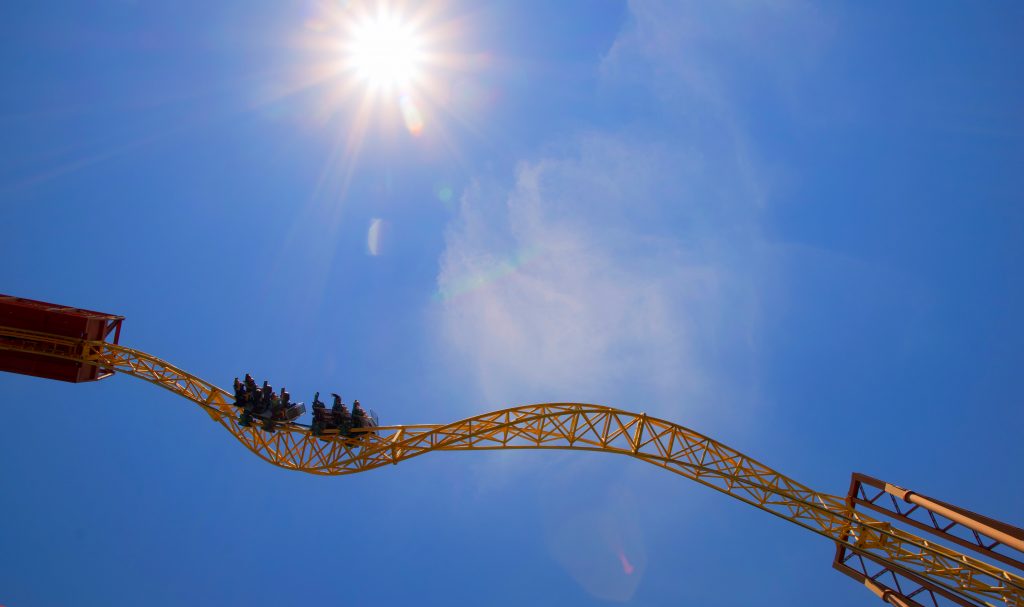 Maurer Sky Loops are quite scary-looking and fairly intense, though feeling secure in the lap bar requires a good squishing of the midsection. 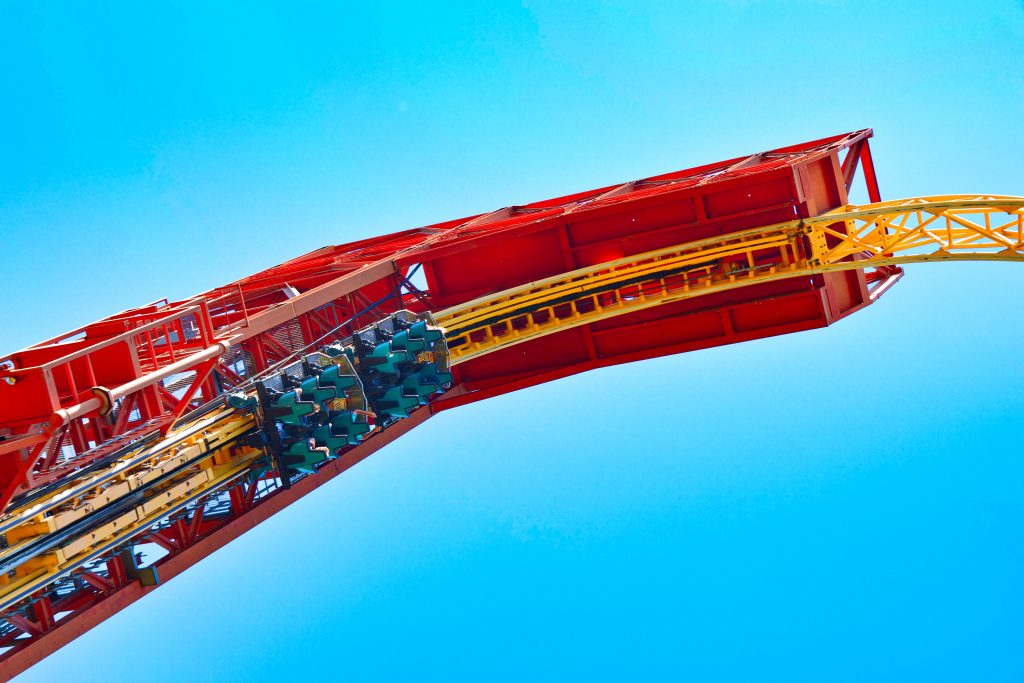 I remember liking these rides more on my rides in 2011 and 2013 at other parks, but maybe I’m just getting old. Two laps on X-Coaster was plenty. 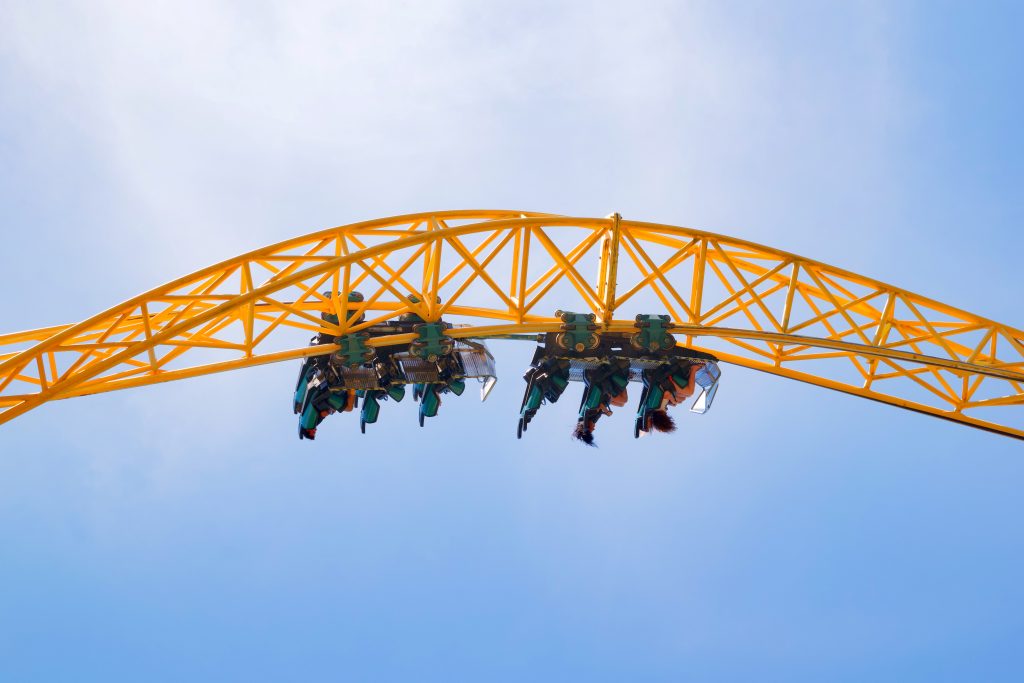 Practically inside the water park is Arkansas Twister, the park’s wooden coaster, so that’s where we headed next. 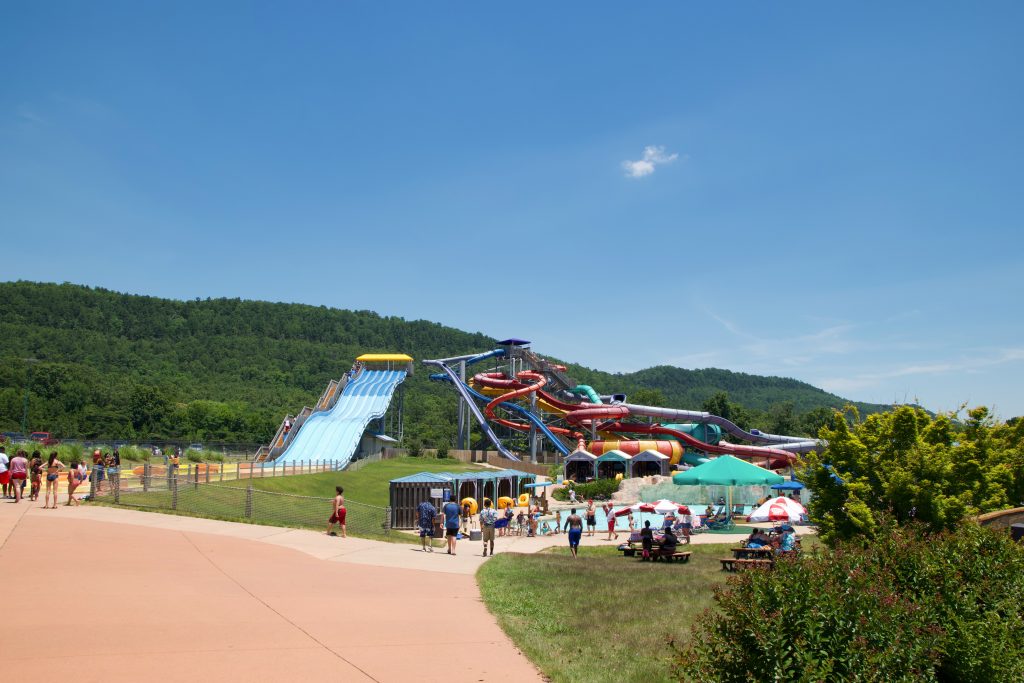 Crystal Falls has a nice variety of slides, plus a lazy river, wave pool, and surfing simulator.

Arkansas Twister is a funny ride. 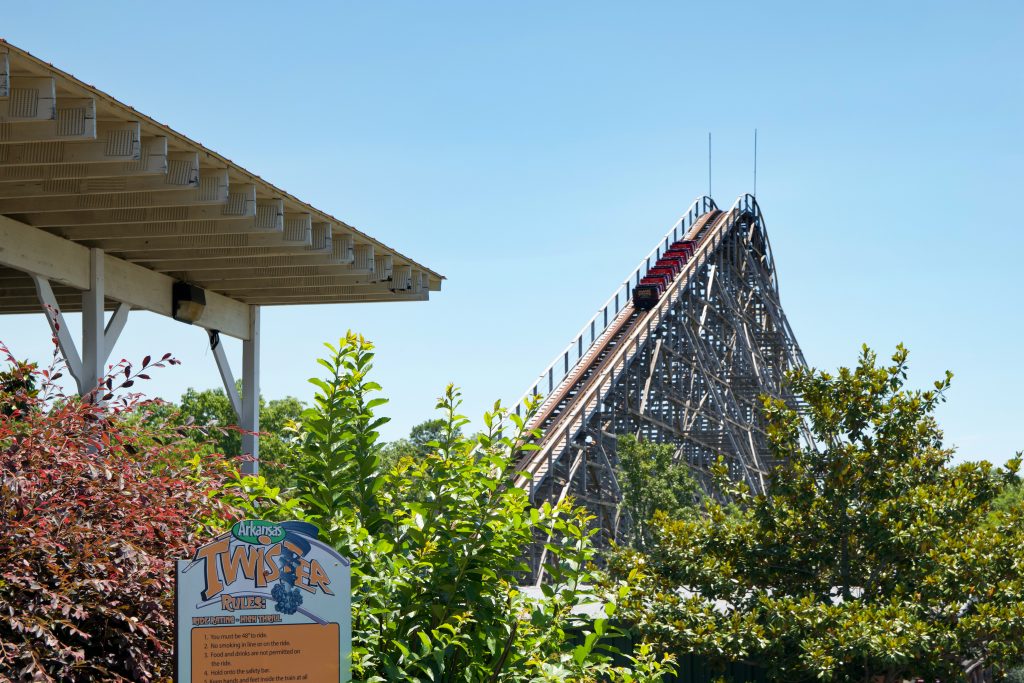 Opened in 1992, Magic Springs bought the ride second hand form Florida’s Circus World / Boardwalk & Baseball. The ride then closed, along with the entire park, in 1995. 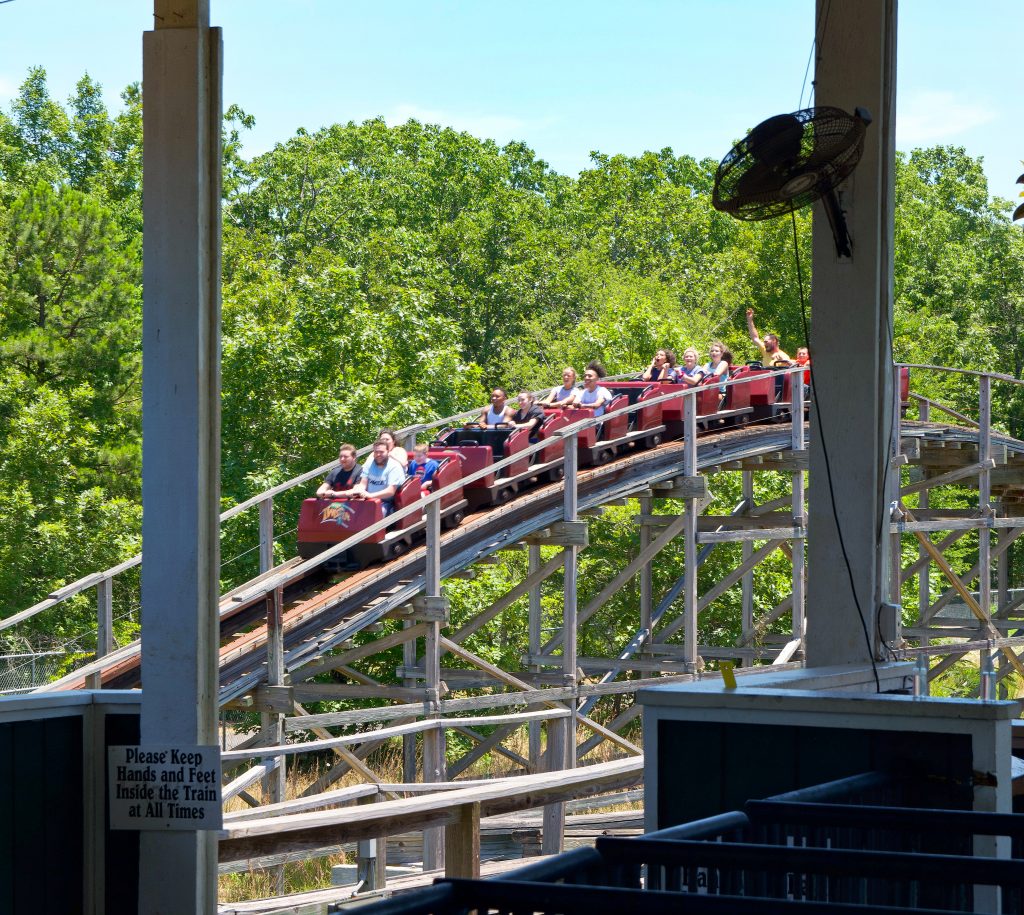 Despite the odds, Magic Springs re-opened in 2000 with Arkansas Twister, which was in need of new trains at that point. With Gersltauer’s cost-efficient fiberglass trains all the rage at the time, they were a perfect fit for Magic Springs. 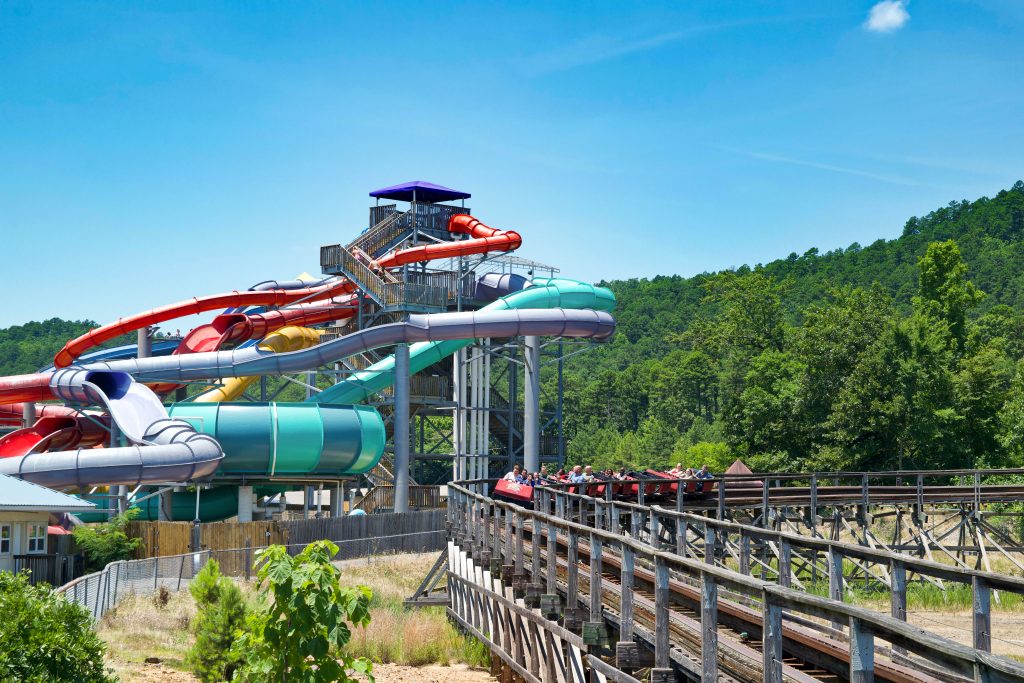 Though numerous coasters have operated Gerstlauer’s traditional wood coaster trains, only 2 still host the rolling stock: Arkansas Twister and The Boss at SFSt.L. From the looks of the transfer track, Twister is down to 1 train ops for the foreseeable future. 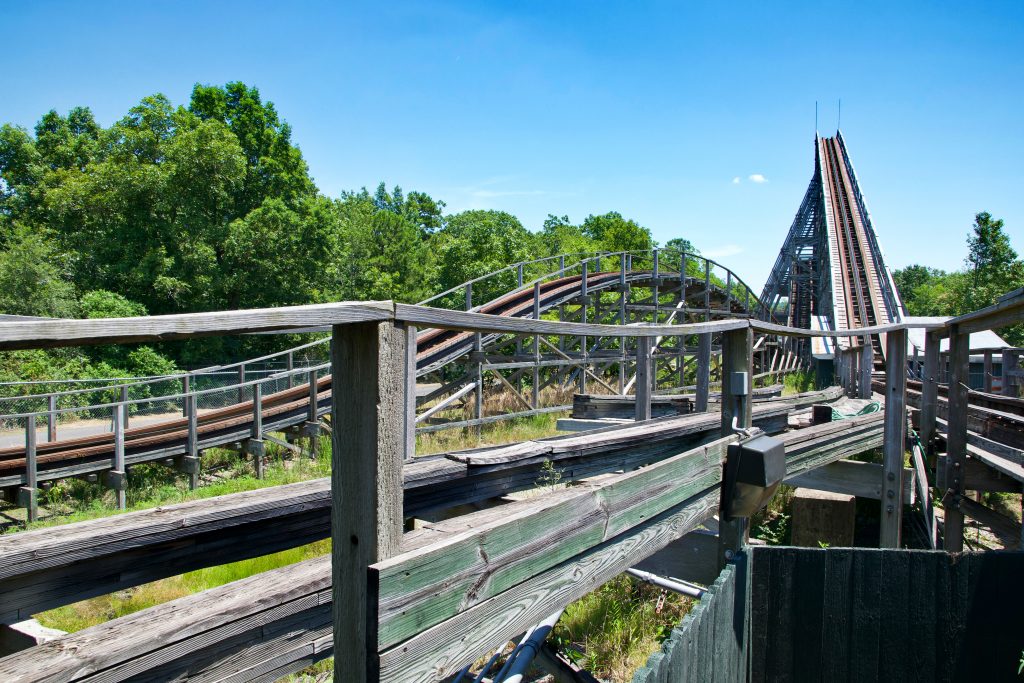 With only the water park and the Hopkins shoot-the-chute online today, we decided against riding any of the park’s water attractions. 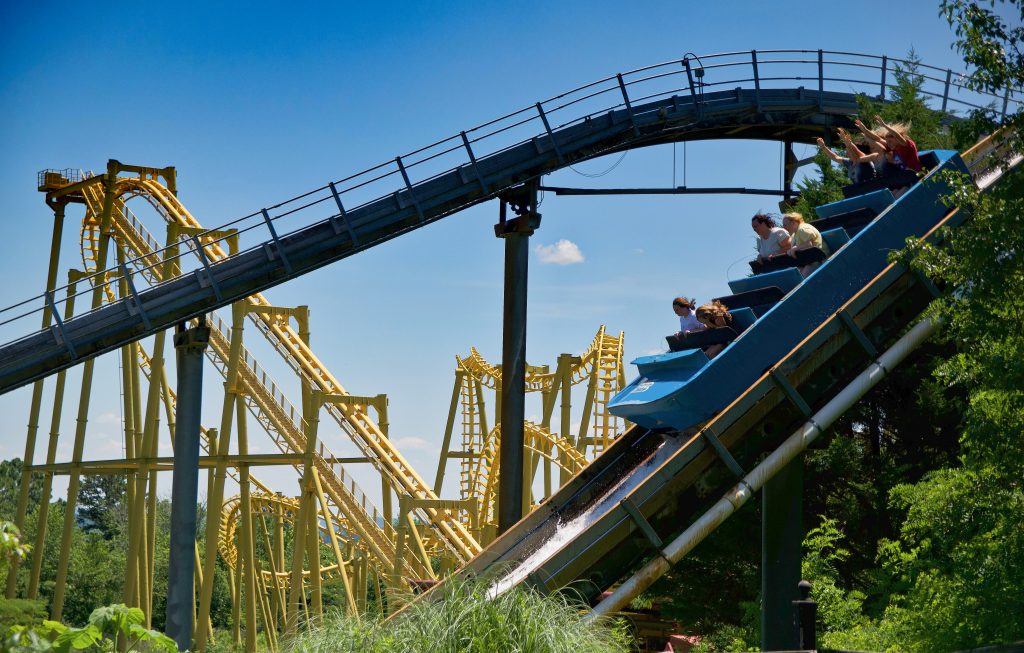 We did, however, enjoy a ride on the park’s kiddie coaster before getting rerides on Gauntlet and Big Bad John. 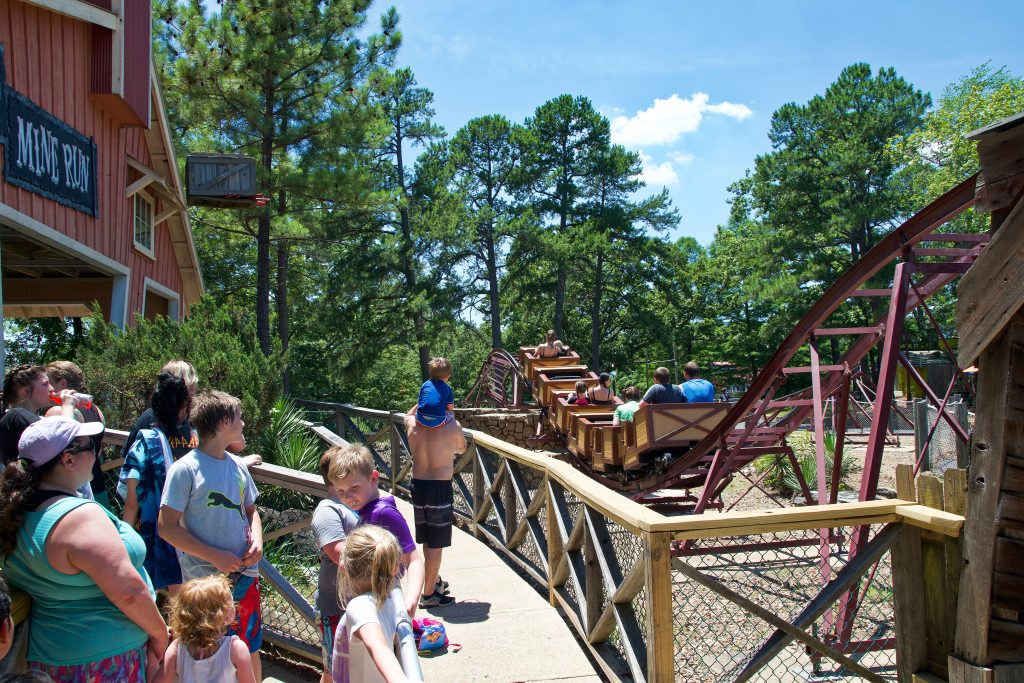 Guests in line for Gauntlet can enjoy impressive views of X-Coaster, which dominates the skyline. 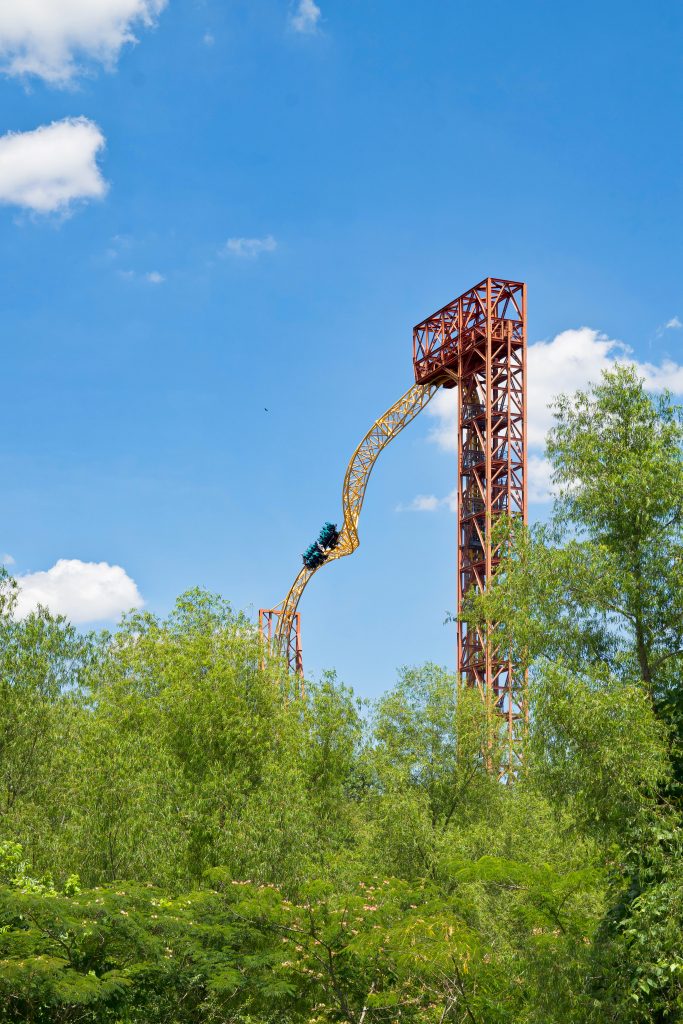 Speaking of Gauntlet‘s line, it was at this point in the day we noticed a vast majority of guests showed little interest in social distancing. 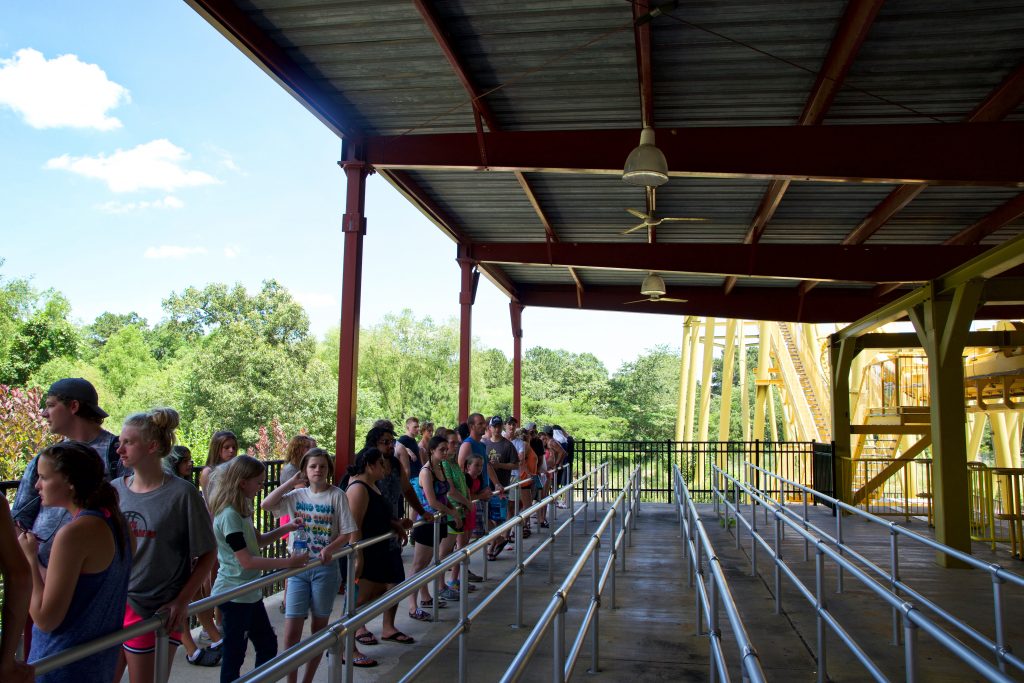 Fortunately we snagged our 2nd Gauntlet ride without having to get to friendly with any of the other park patrons. 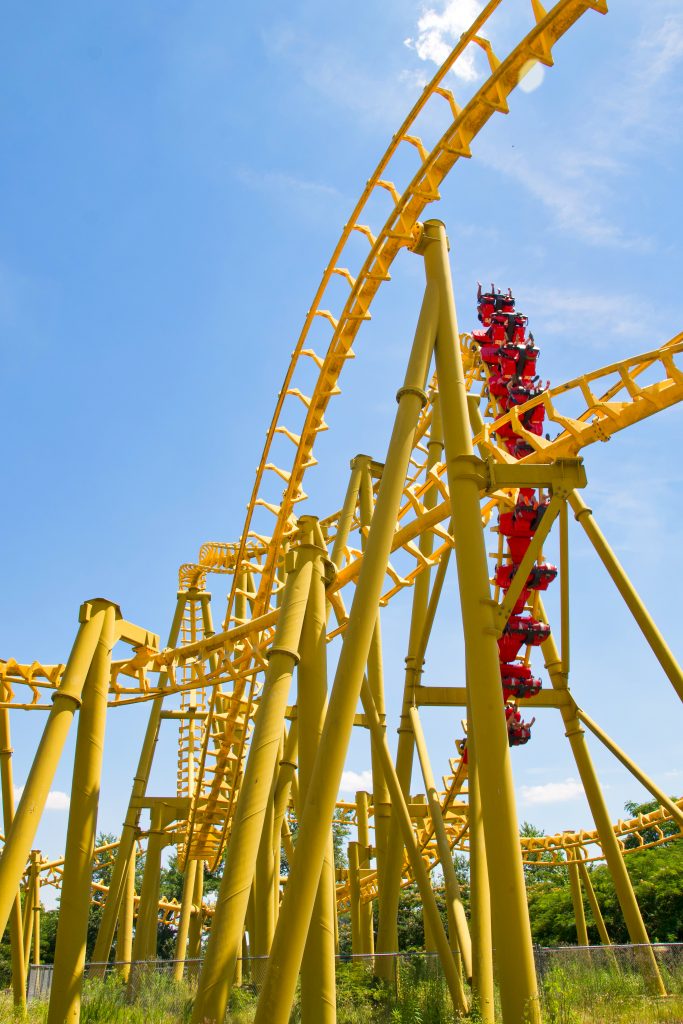 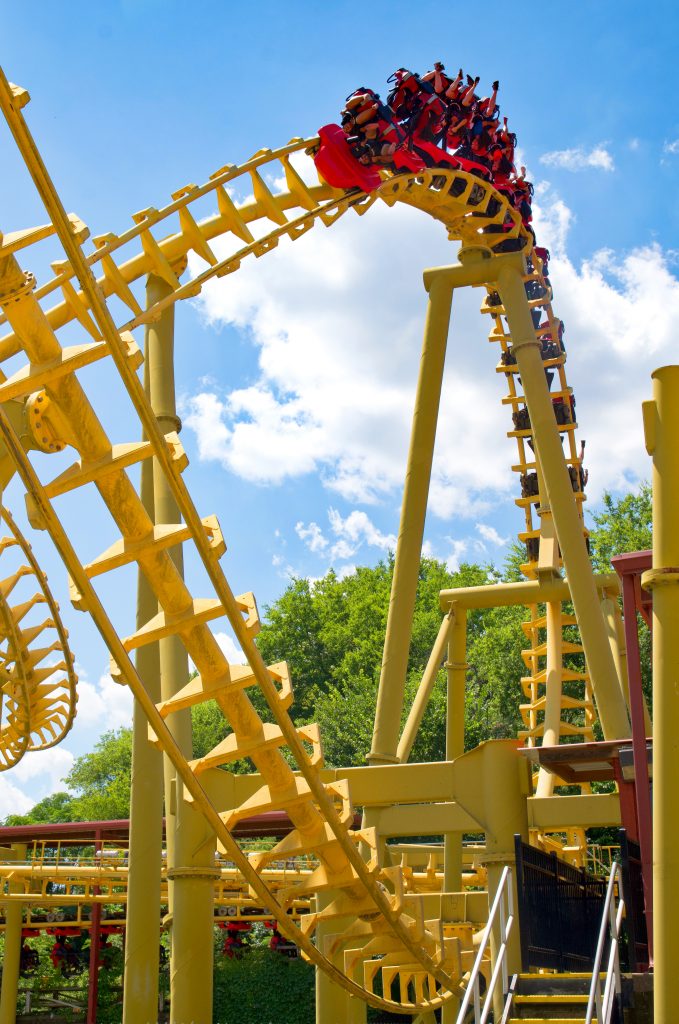 Fun Fact: Gauntlet was originally manufactured for Jazzland, but the Six Flags acquisition took the park in a different (their 2nd-hand Batman: The Ride clone, specifically). 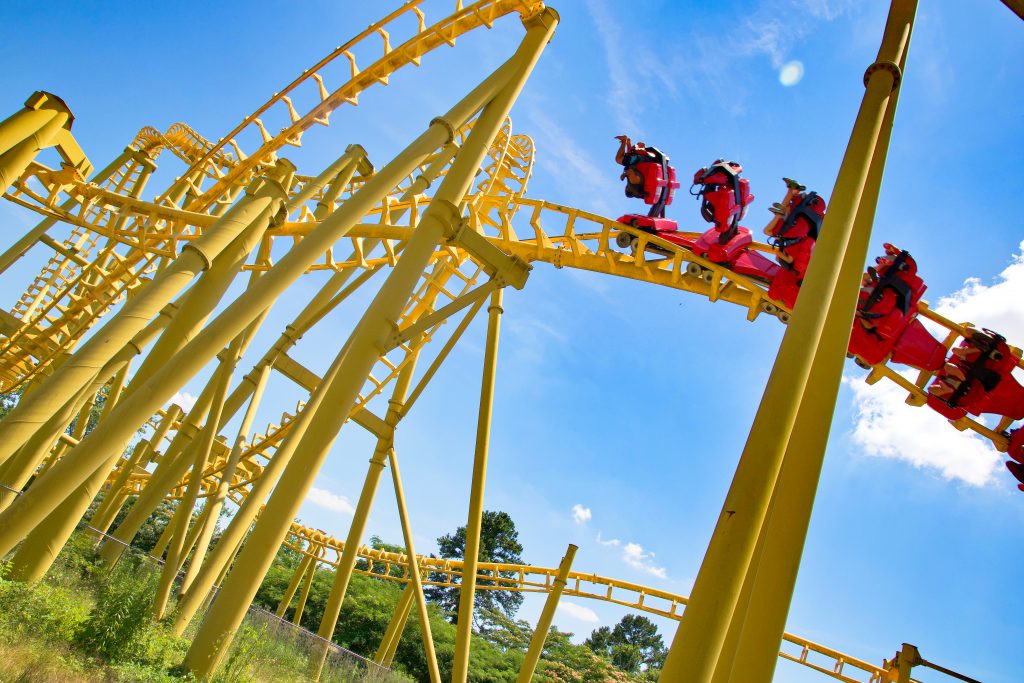 We wrapped up the day with one last ride on the park’s top coaster, Big Bad John. This Arrow classic fits beautifully within Magic Springs’ terrain despite being relocated 2x over. Love this view from the station – we like to imagine how Tennessee Tornado’s infrastructure was built for this ride’s stint at Dollywood, following its 1988 departure from Six Flags St. Louis. 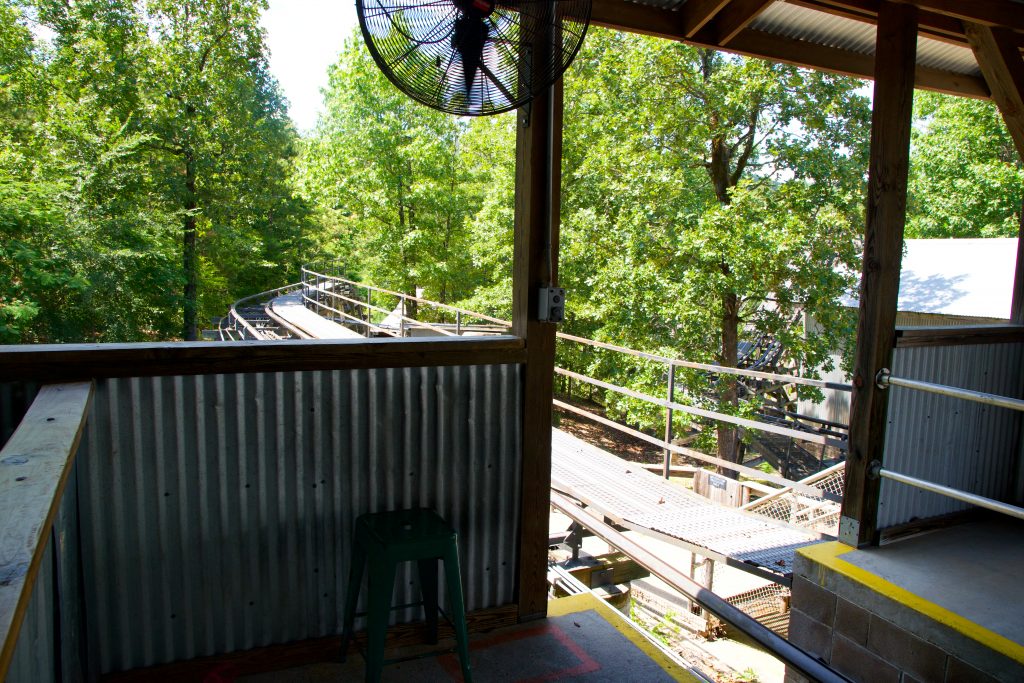 That concludes our Magic Springs update! Be sure to visit us on Facebook, Instagram, and TikTok, and check out some of our most recent updates: