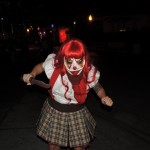 California Coaster Kings attended the Opening Night of this year’s spectacular Knott’s Scary Farm! Thanks to the Fright Lane and Skeleton Key passes we manage to visit all shows, all mazes, all Skeleton Key rooms, and all Scare Zones! In this particular review we’re taking a look at the event’s three Scare Zones, and at their shows: Elvira’s Asylum, and The Hanging: Straight Outta Calico.

Scary Farm was impressively good this year! I very much enjoyed the event, but I do have a few words of advice; Do not expect much from their Scare Zones. The mazes are incredible (CHECK OUT OUR MAZE REVIEWS), and their shows are also on point this year! So focus on getting as many mazes in (as possible), and at least one show. Good thing with the shows, there’s a lot of room for a large audience, so those are easier to get in than all the mazes. Again, a great event this year! Come visit I’d say!

Thank you for checking out the Scare Zone and Show Reviews of Knott’s Scary Farm 2015, we have the MAZE Ratings and Reviews LIVE here, so check back! In addition, share your thoughts of the Scare Zones and shows with us below! What’s your favorite?