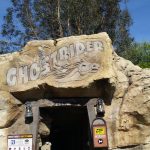 It was time for a nice Knott’s Berry Farm visit before the summer crowds… and what better day to visit Knott’s Berry Farm than the day GhostRider is soft opening minutes before the park closes? In today’s update we’ll take a look around the park. Some ride operations, the finished repaint of Jaguar!, the Ghost Town construction, and of course… the newly refurbished wonder-woodie… GHOSTRIDER! 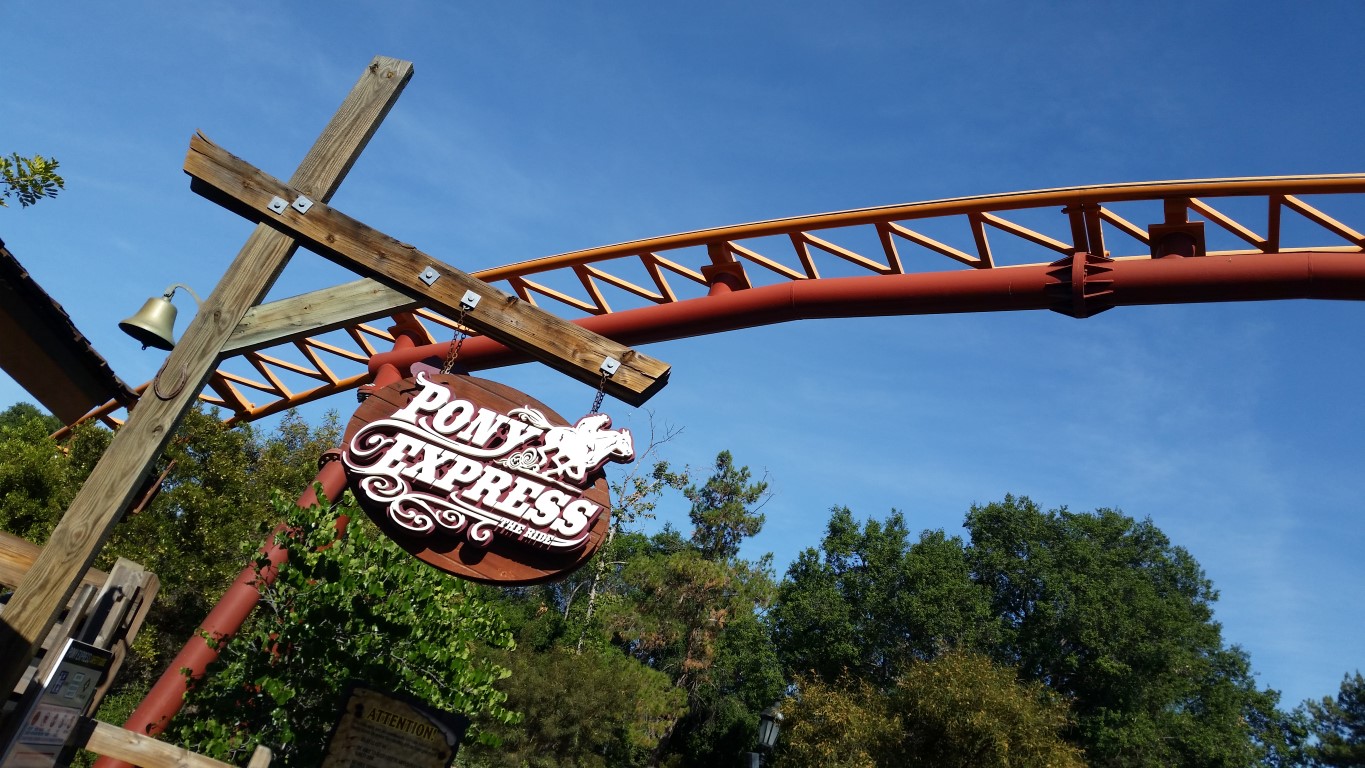 Silver Bullet on the other is finally back to two train operations and awesomely quickly moving lines! 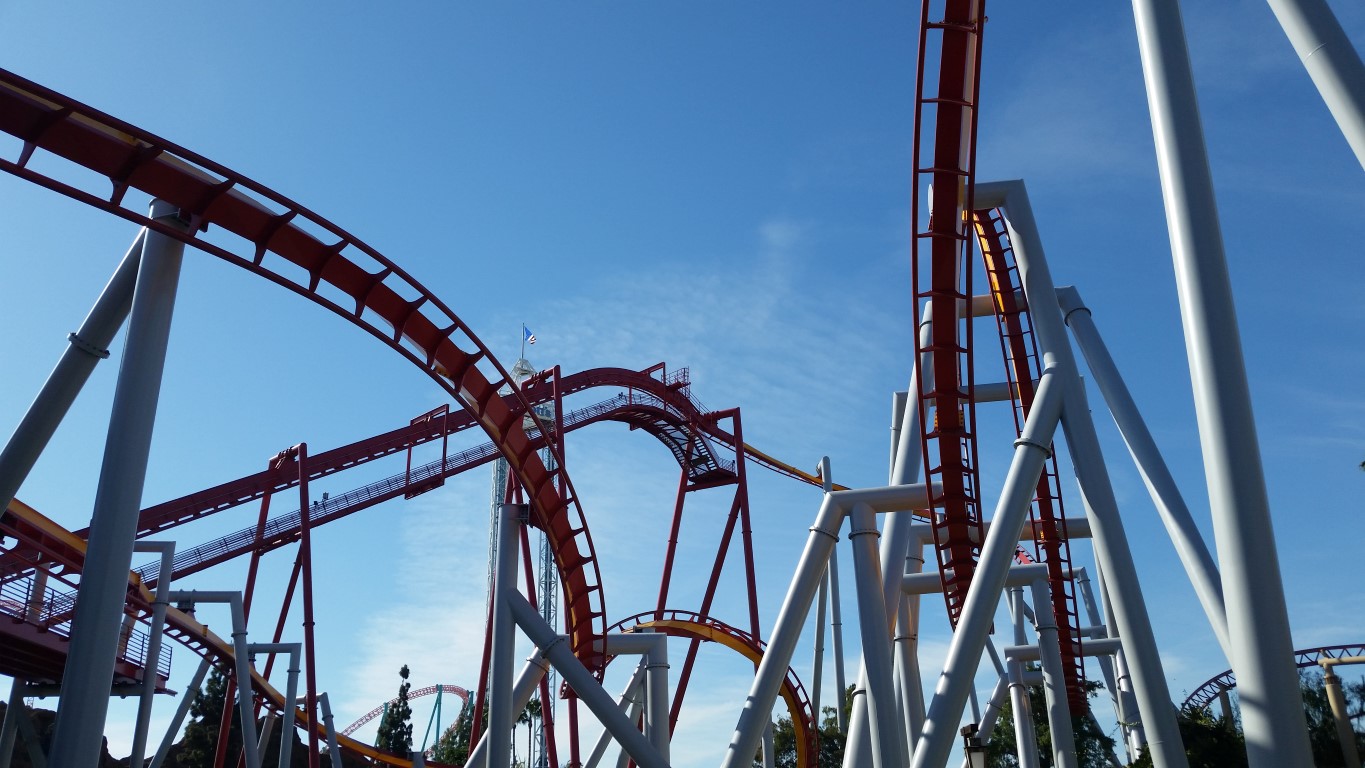 The nearby coaster: Jaguar! has been entirely repainted now. Including the turn over at the Sierra Sidewinder station. 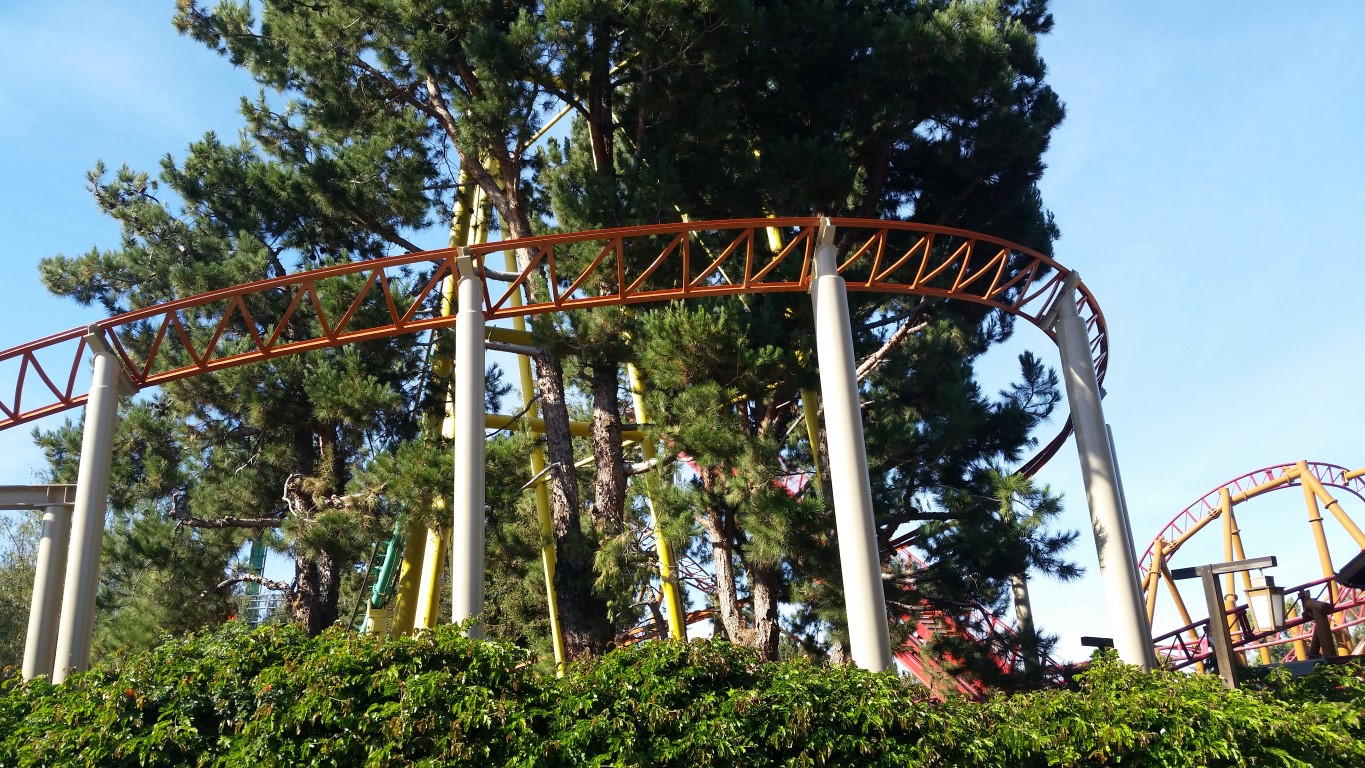 And these funky lift-hill supports! (This ride must have the funkiest supports on the West Coast… take a look next time you’re at the Farm). 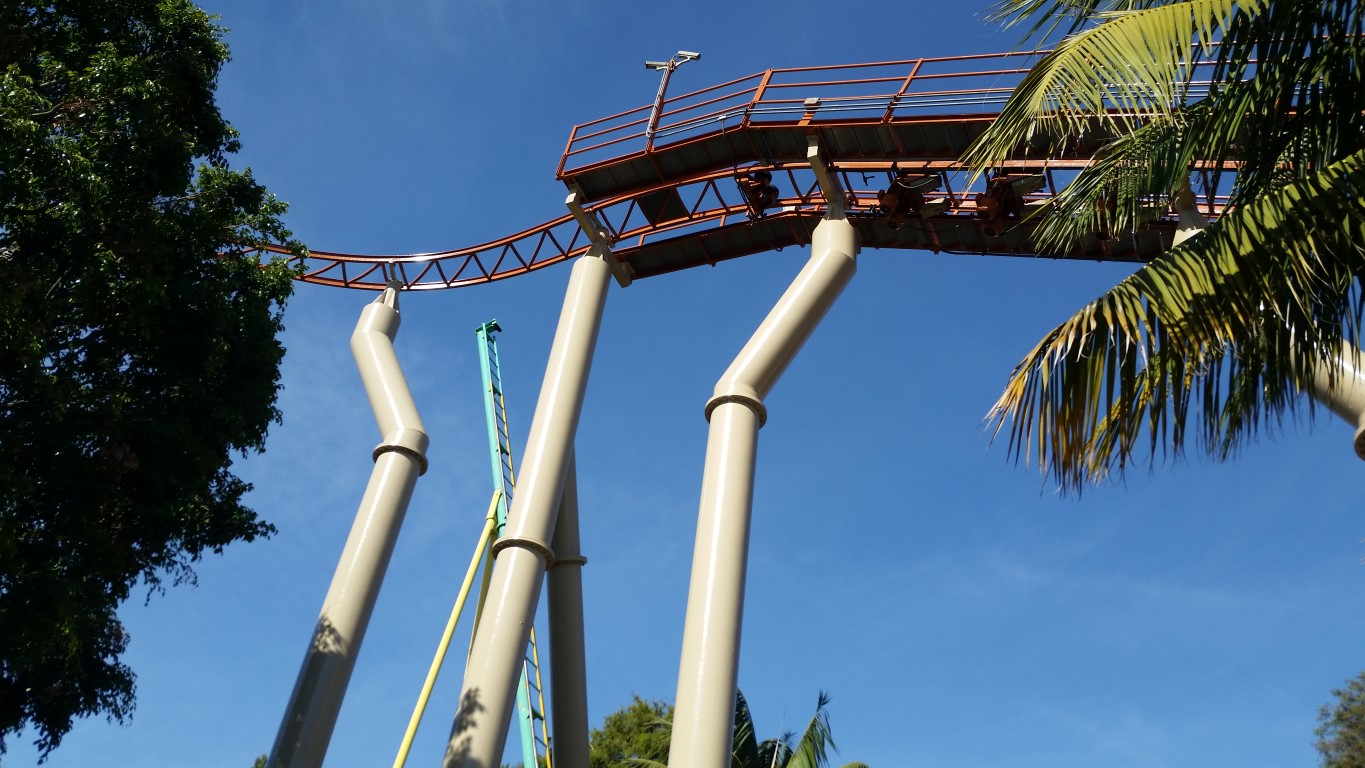 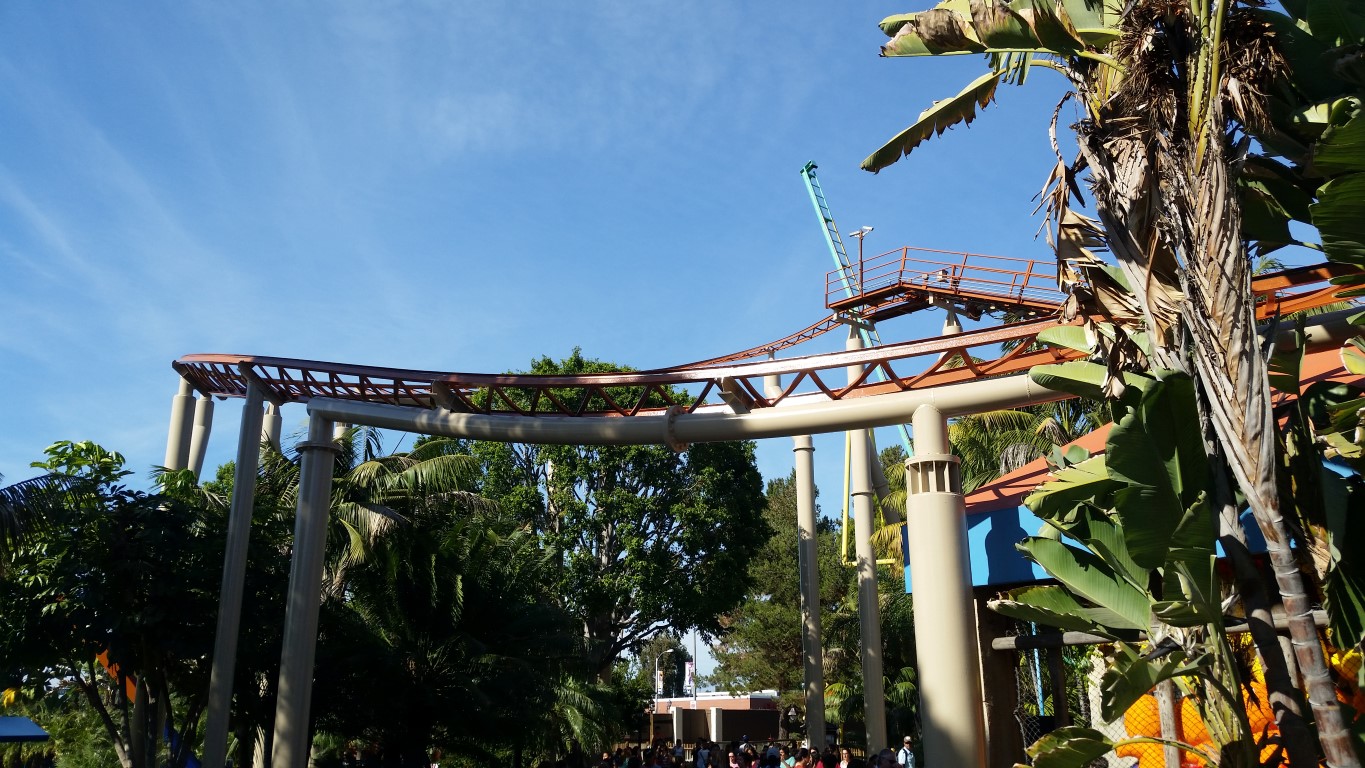 And then here are some more pictures of the completed repaint. 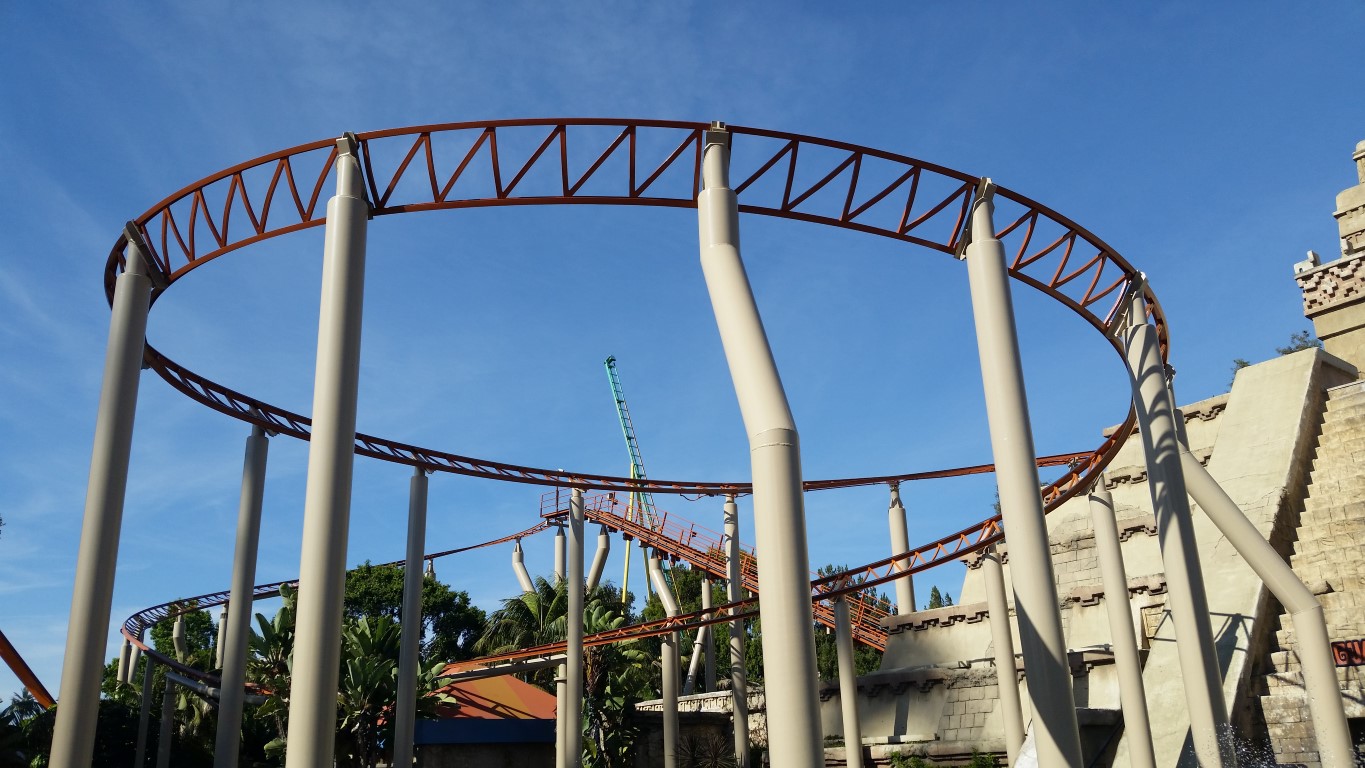 (Look at what the shadow of the track does to the look of the supports… trippy). 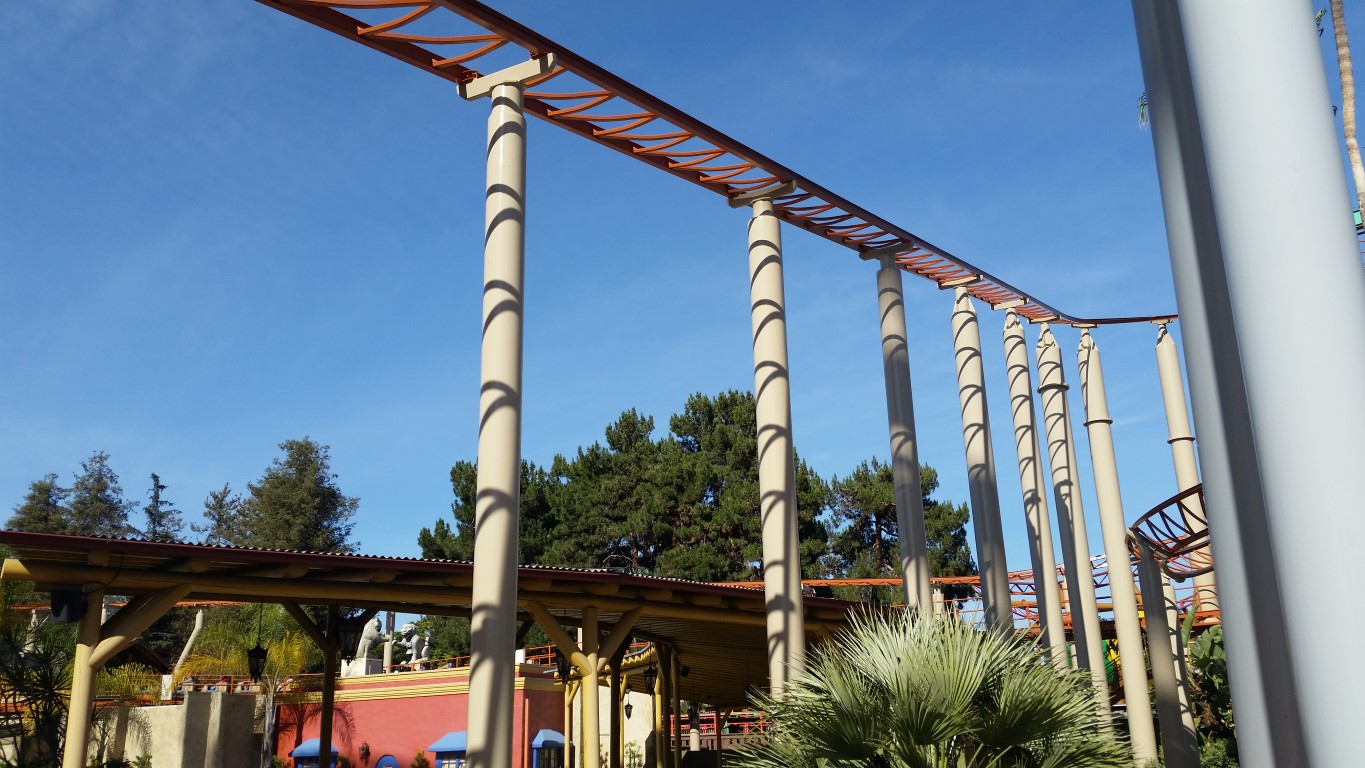 The only Jaguar related thing that hasn’t been repainted is the cage around the track passing through Montezooma’s Revenge’s loop, which is still blue. The supports there though, are repainted. 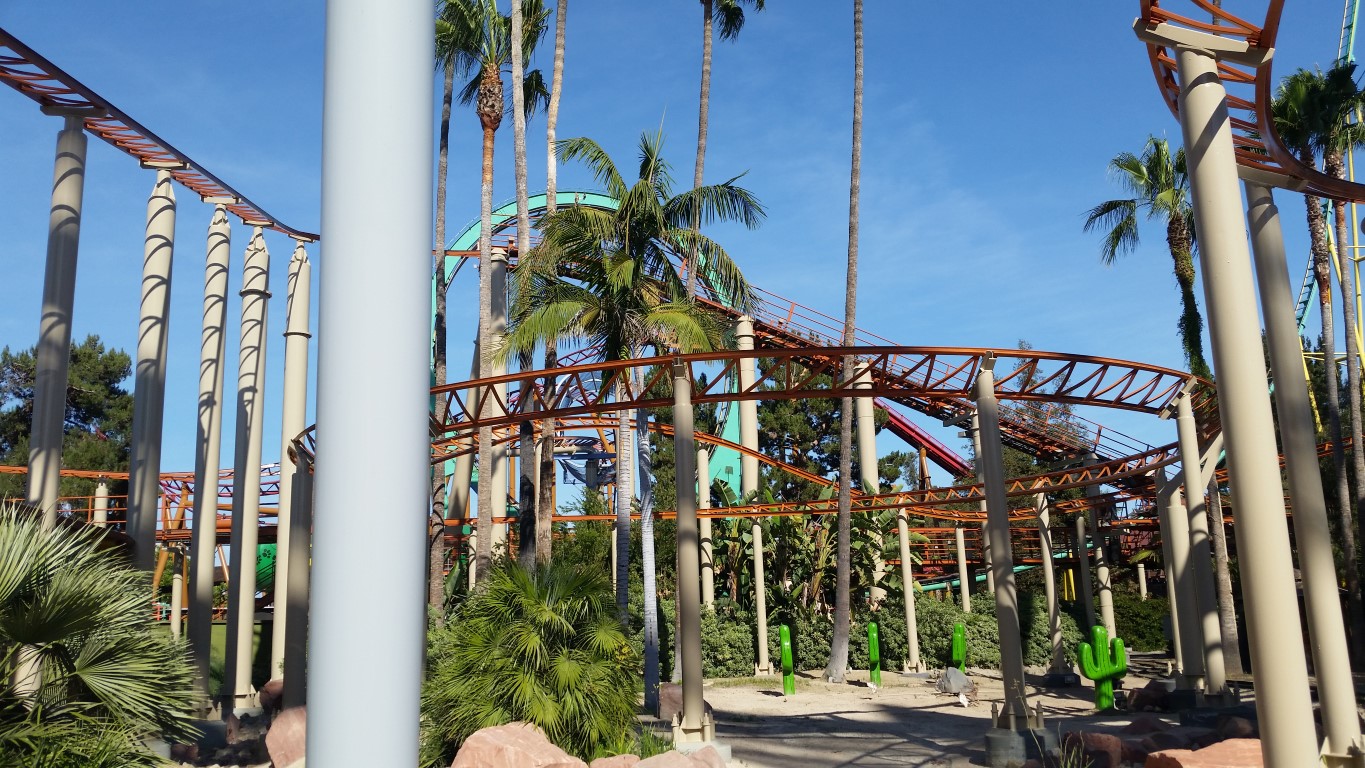 Over at the Timber Mountain Log Ride, some of the park’s Boardwalk games have been taken out and a new shaded seating area has been created! 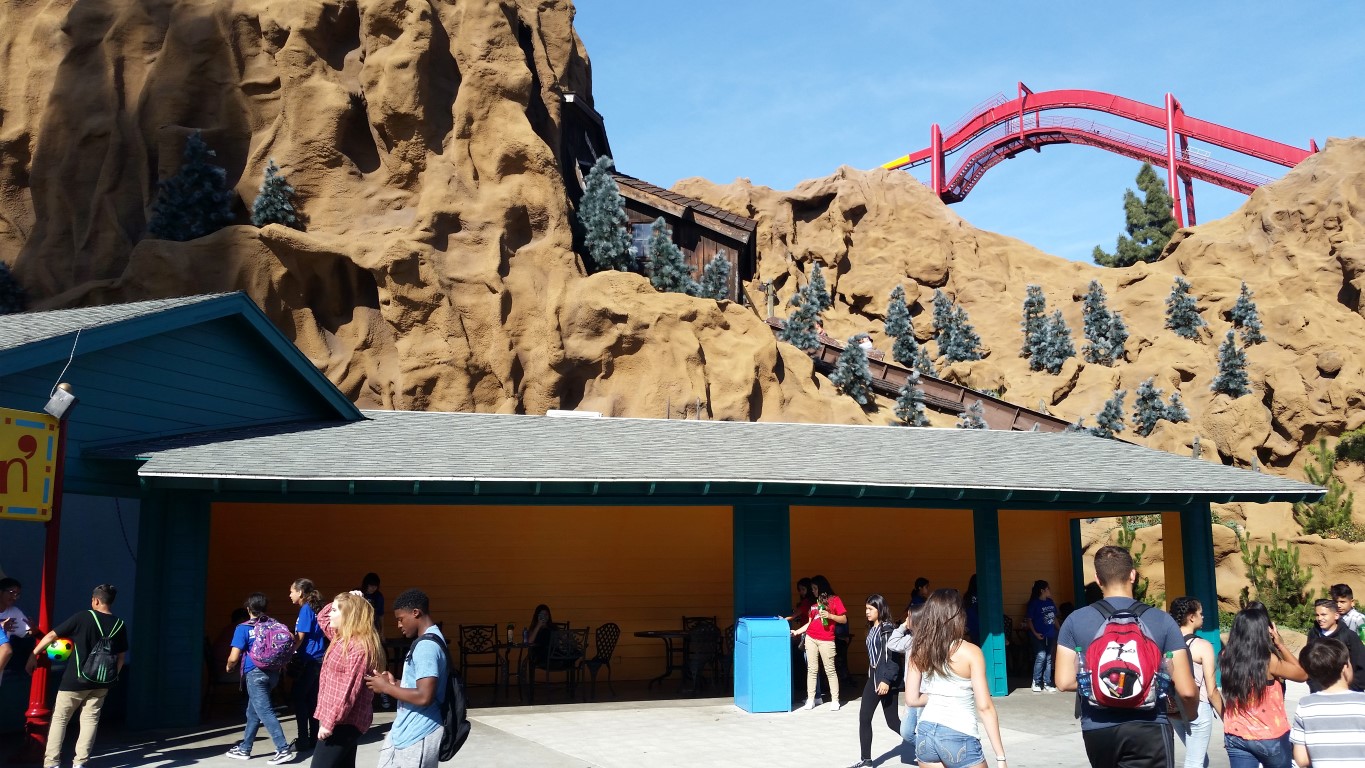 Moving on to construction, this is the back of the new Stunt Show sets, which look slightly similar to the old sets. They’re complete as far as I know, as they seemed to be rehearsing for shows inside. More regarding the show some time next week! 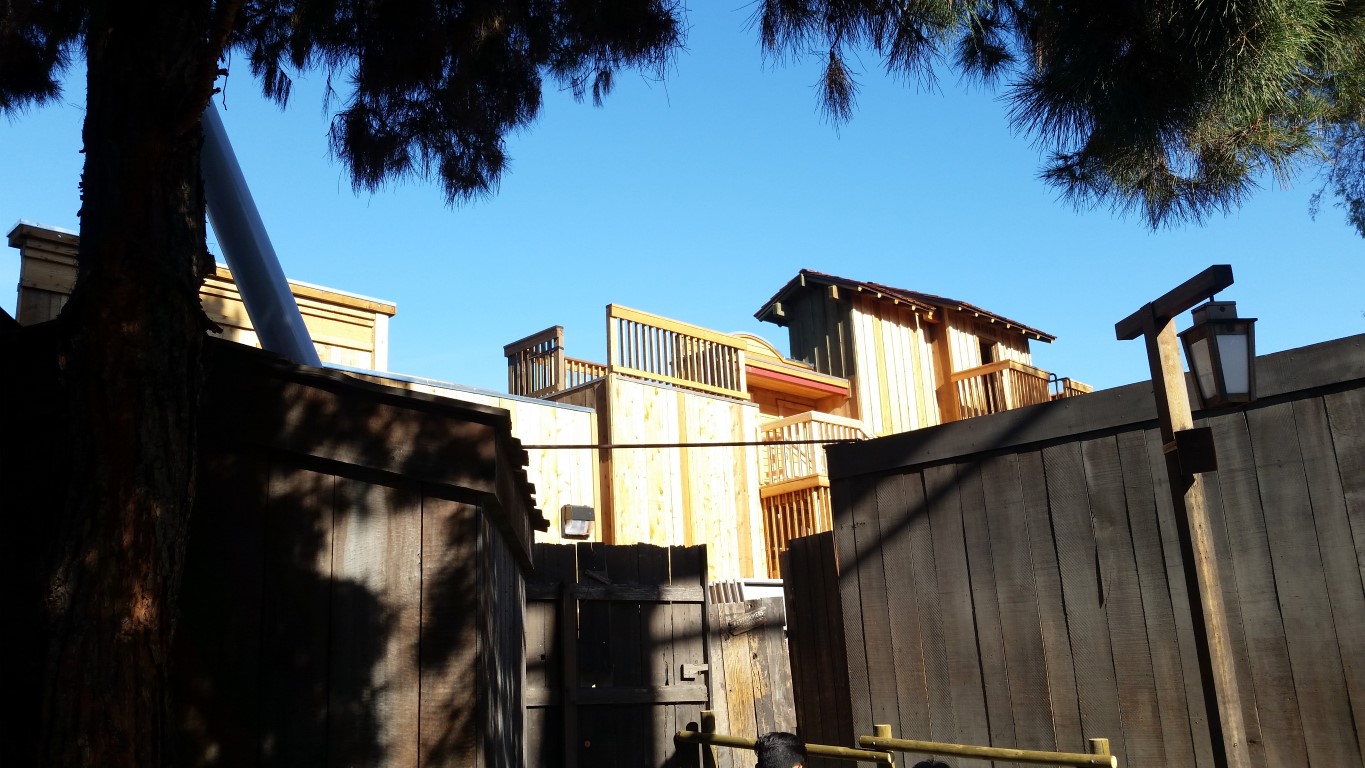 Speaking of stages and shows, the new Ghost Town Alive! stage will host a circus like show. Not many details have been released, but we’ll share once we know more. Meanwhile let’s look at the construction progress being made! There’s a bit more facade work being added to the side here; 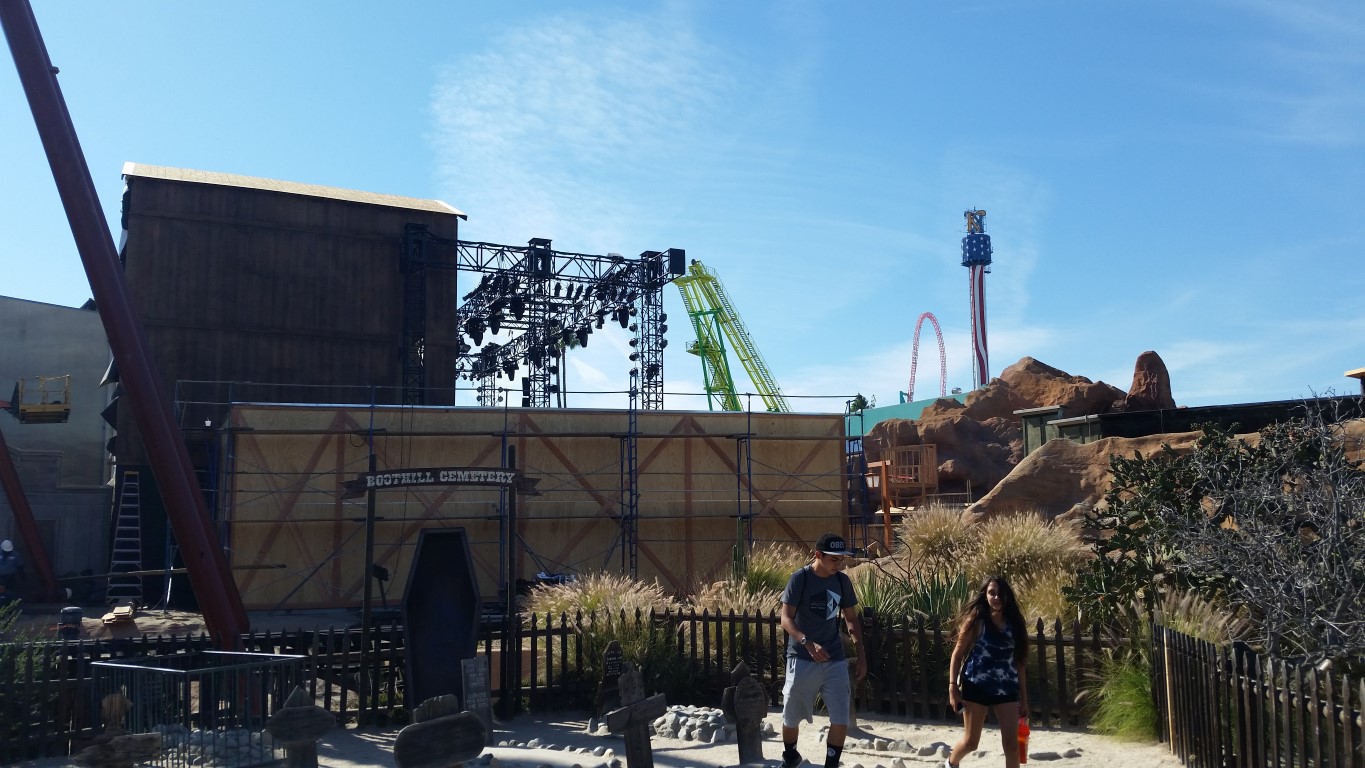 But in general, the stage is HUGE. Absolutely gigantic. I can’t wait to see the finished product. 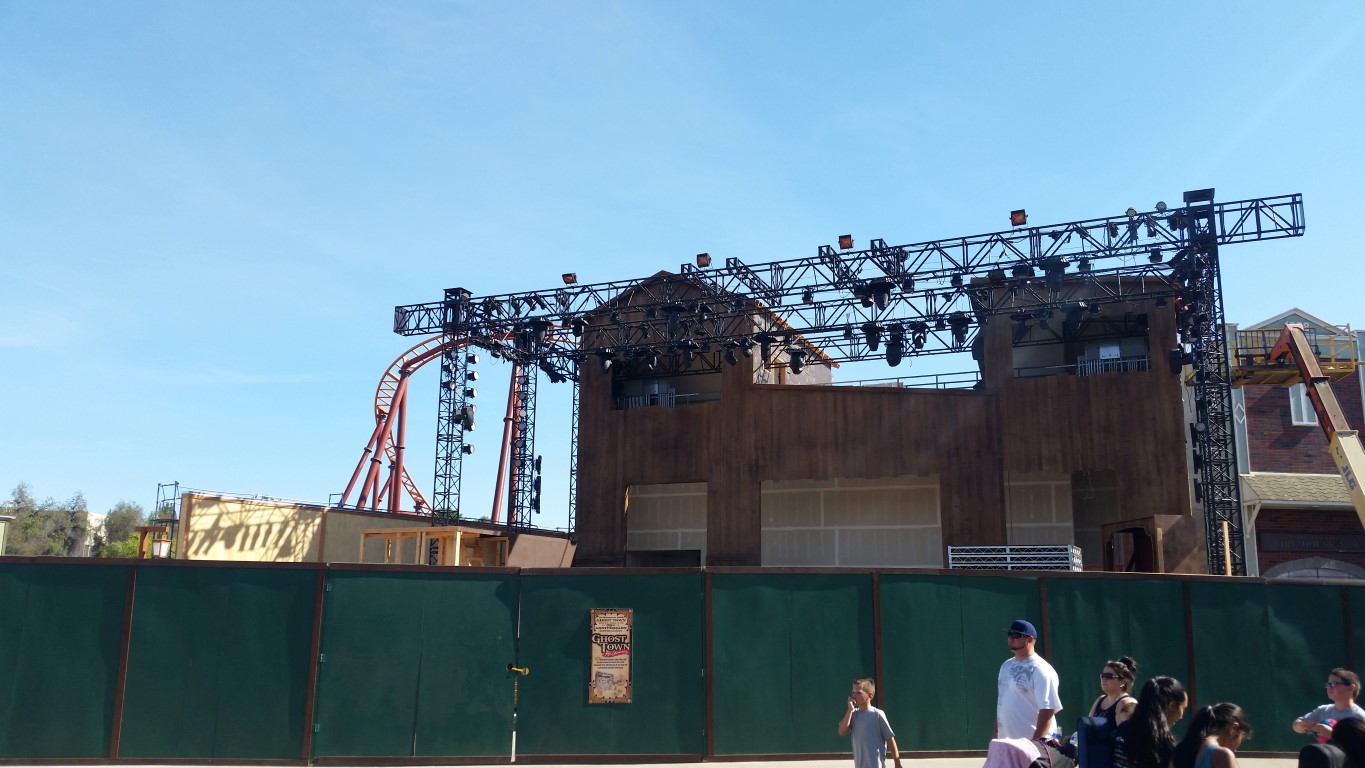 The lighting (structure) is currently going up, which is huge as well! 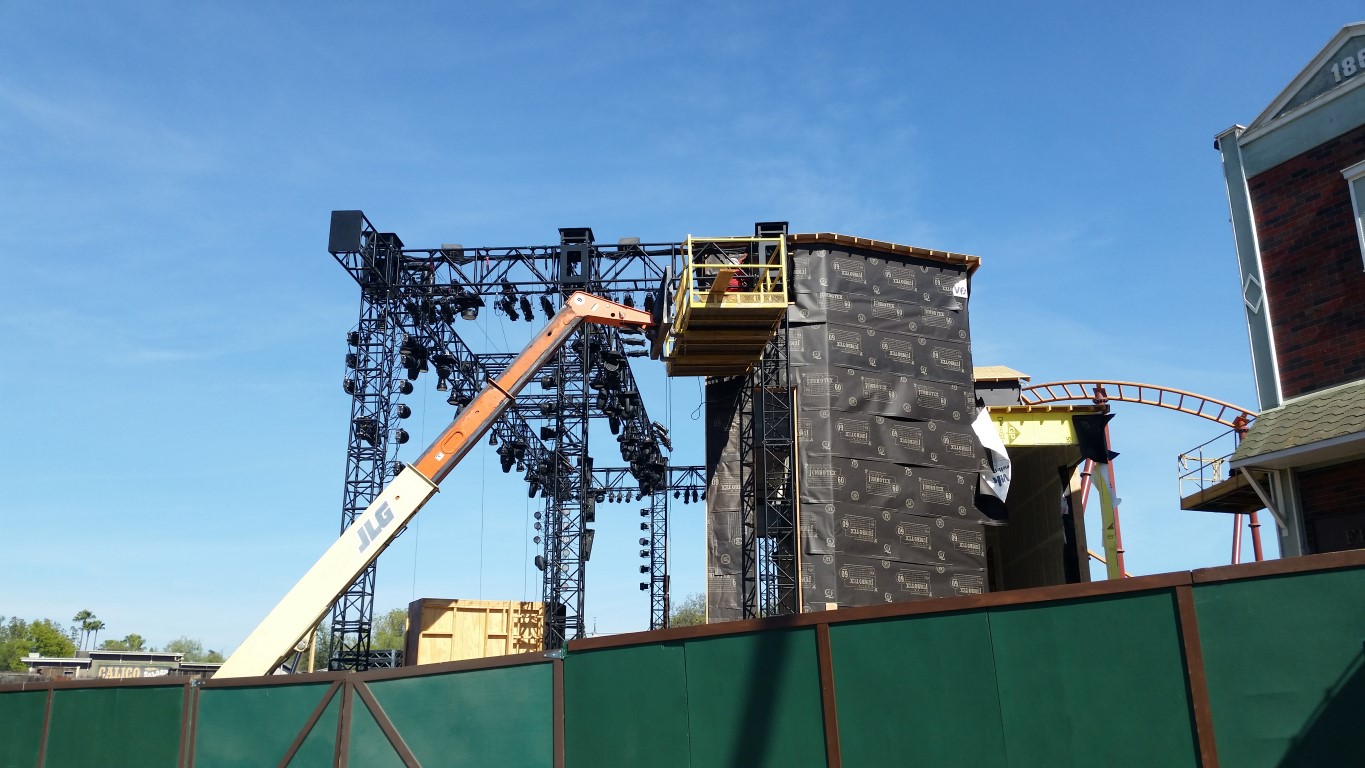 The sound and light booths are currently being constructed as well. One directly across from the stage. 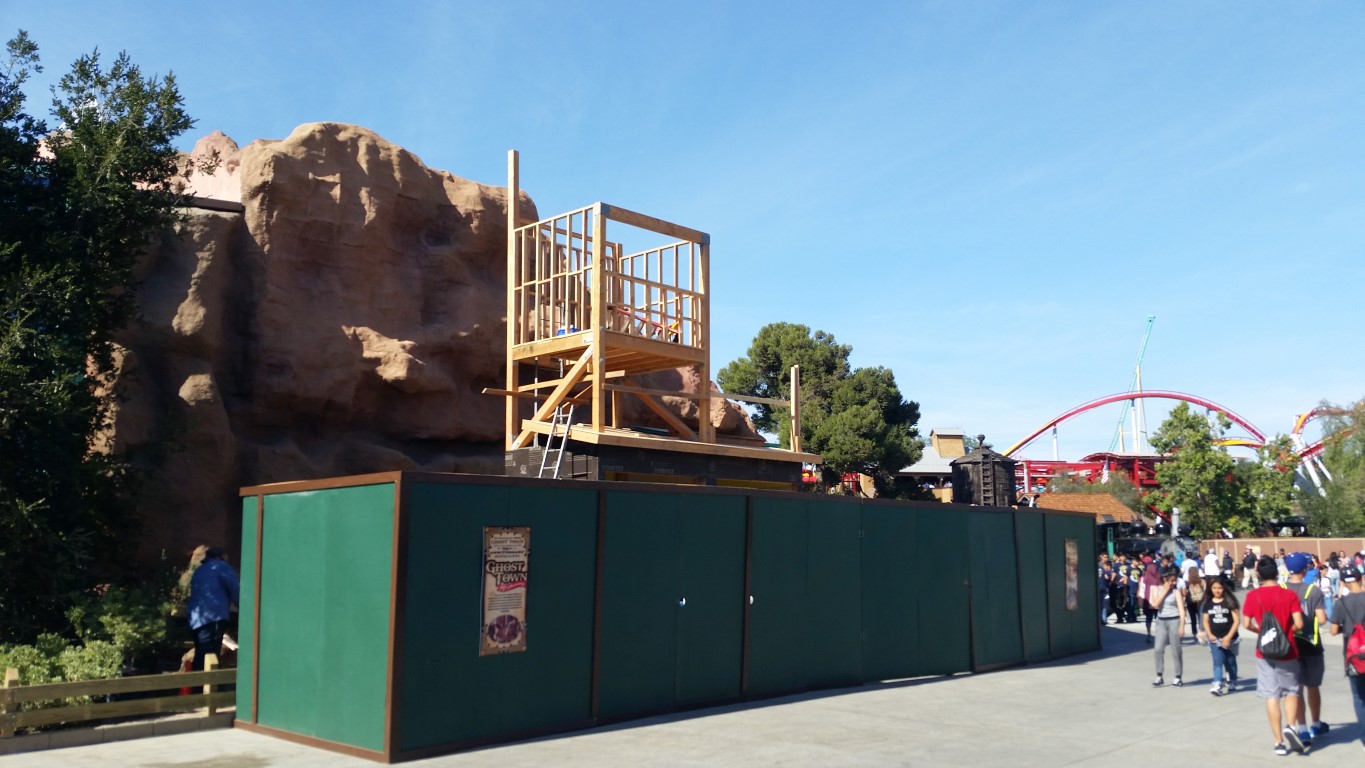 And the other over at the train tracks. 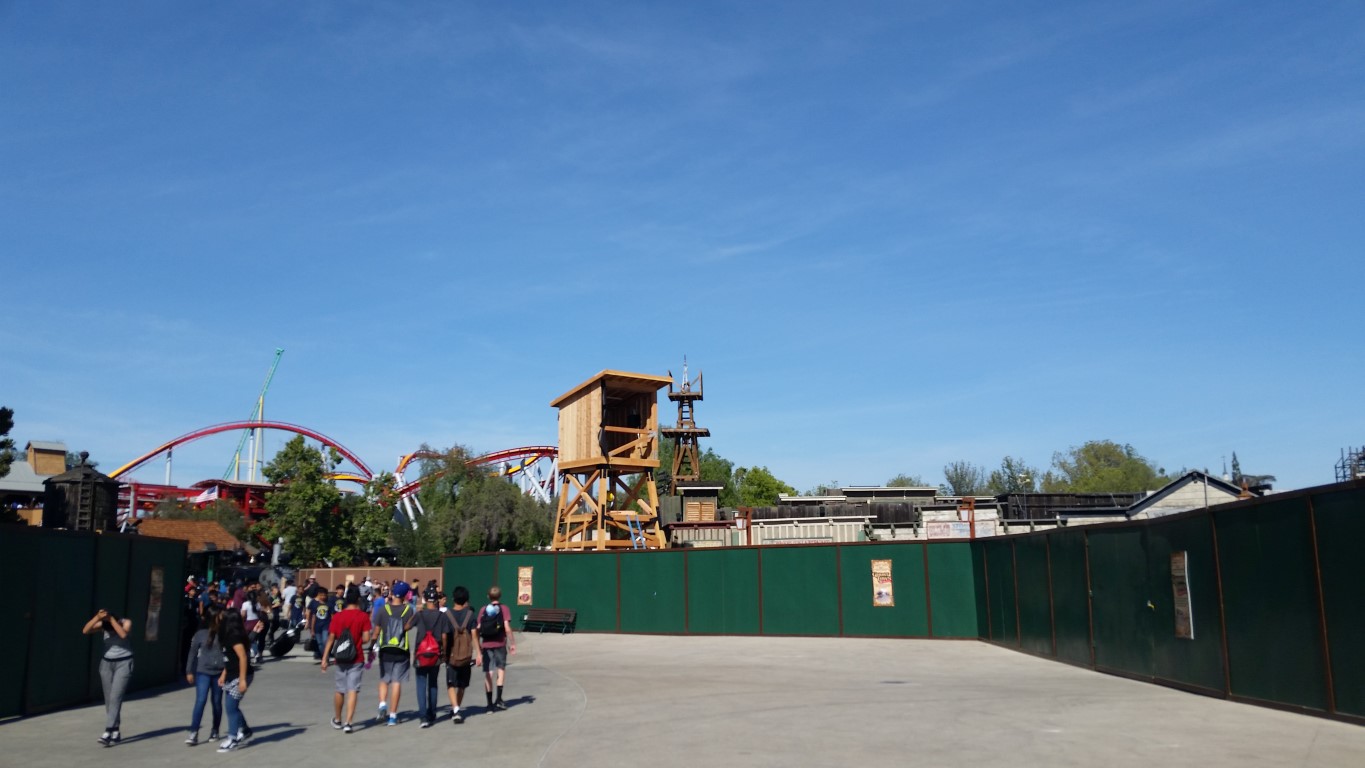 Here’s the site of the previous Calico Stage, the stage has been taken out, so has the water tower control booth across from it, and the site is currently surrounded by construction walls. 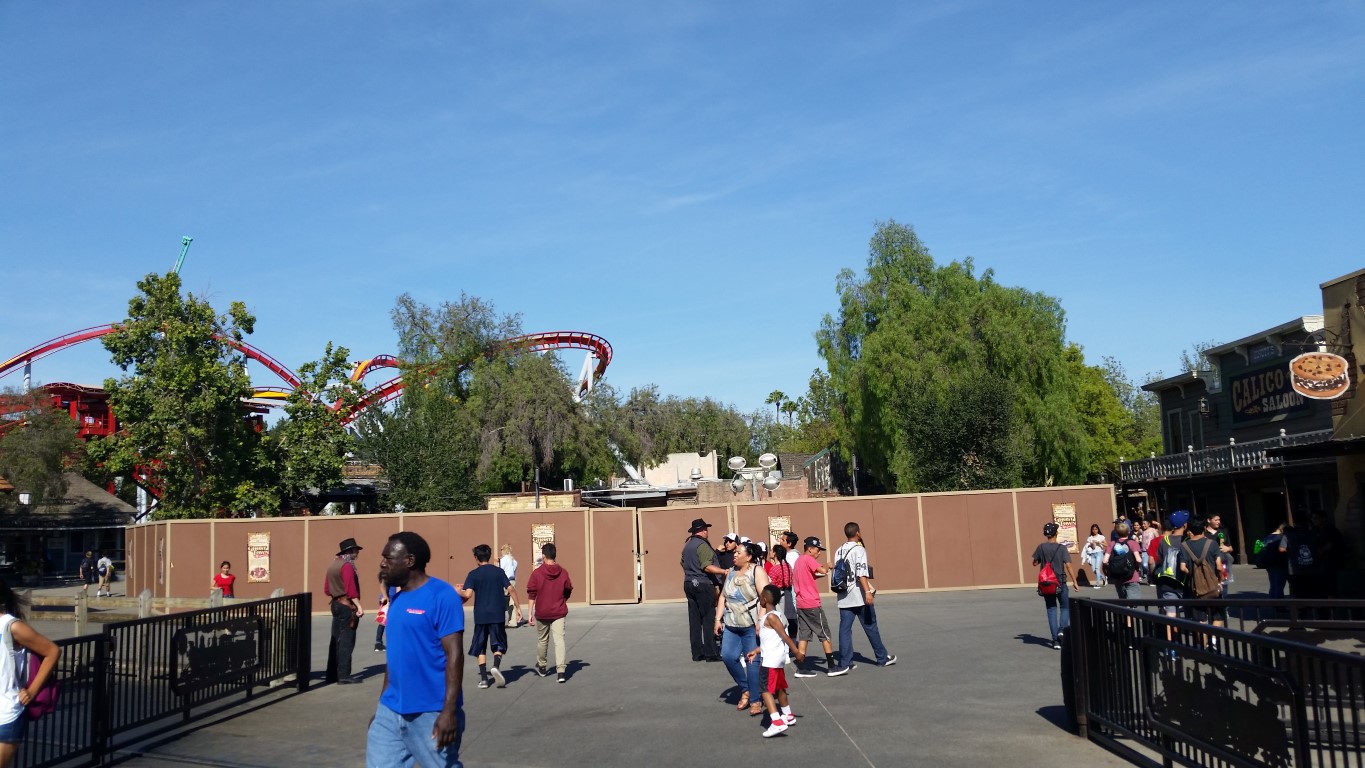 Behind these walls a park will be created, to suit Ghost Town and the train station across from it. Which should be a relaxed and fun place to hang out at. 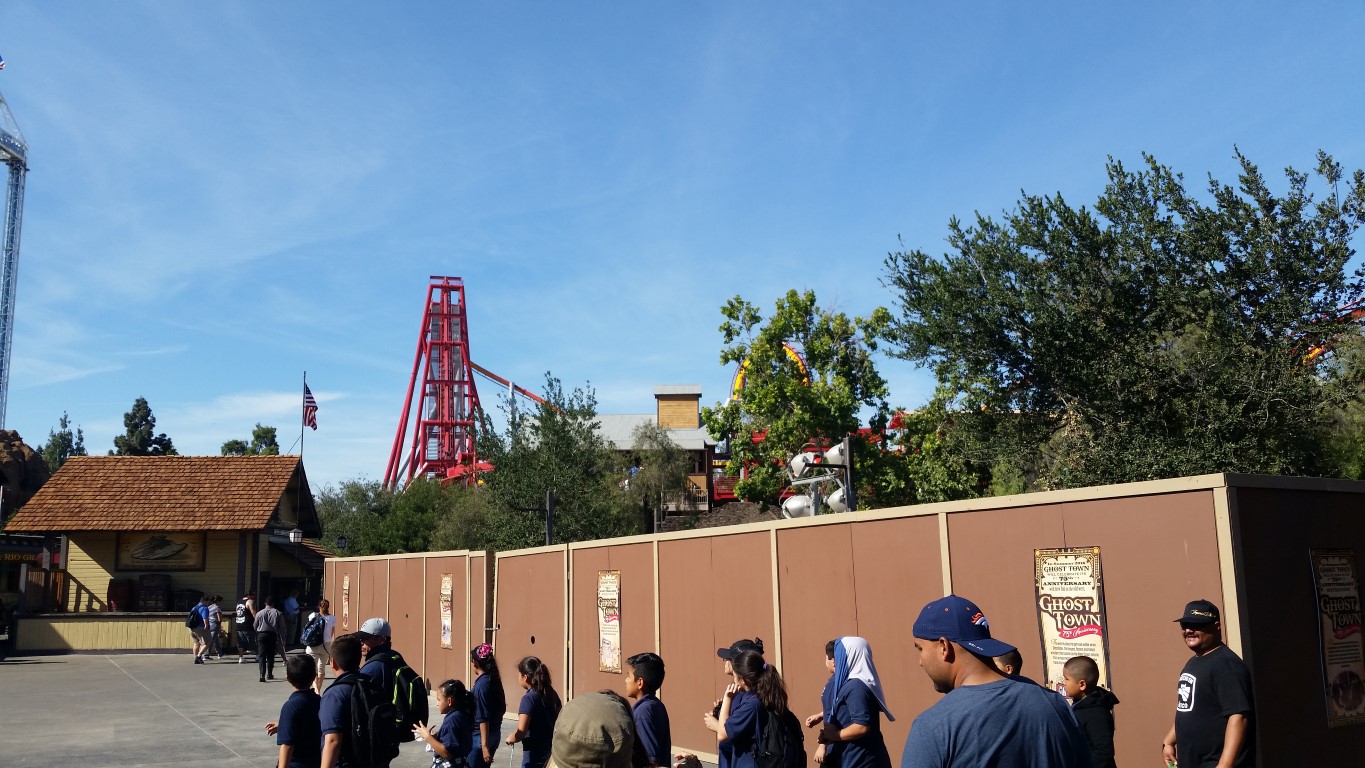 Here’s a few from the Silver Bullet station, not much has been done inside, yet. 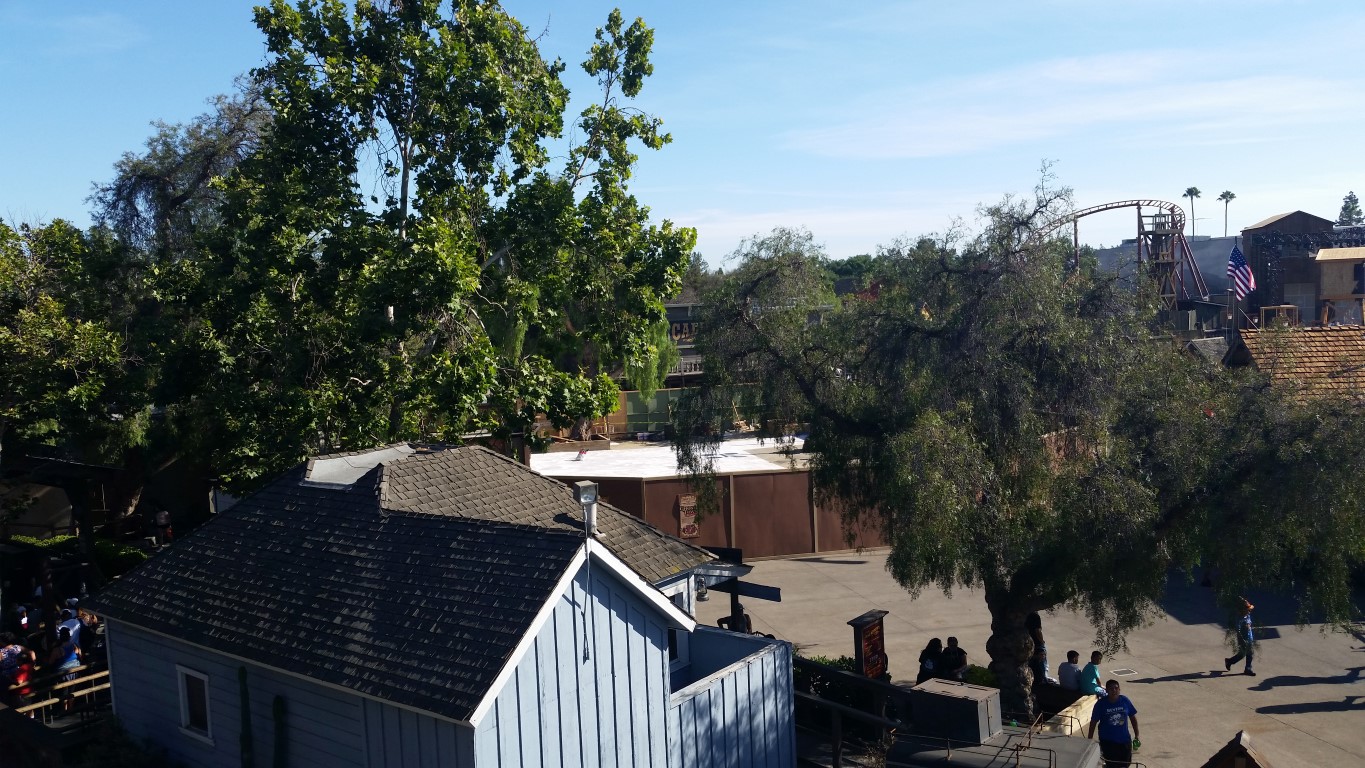 But let’s now move on to the most exciting thing of the day… THE BEST IN THE WEST is back baby! GhostRider! 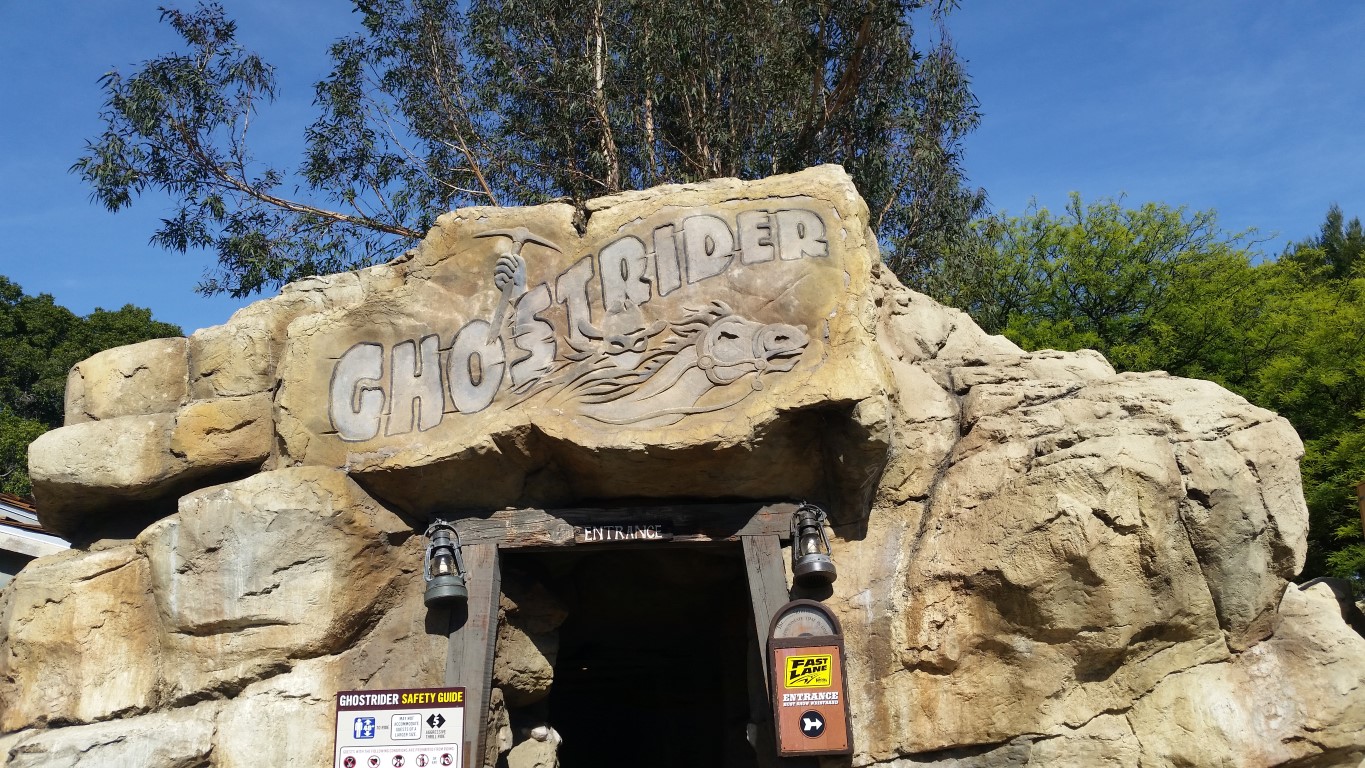 The new Pan for Gold attraction opened a few weeks ago, as you may remember from one of our updates. 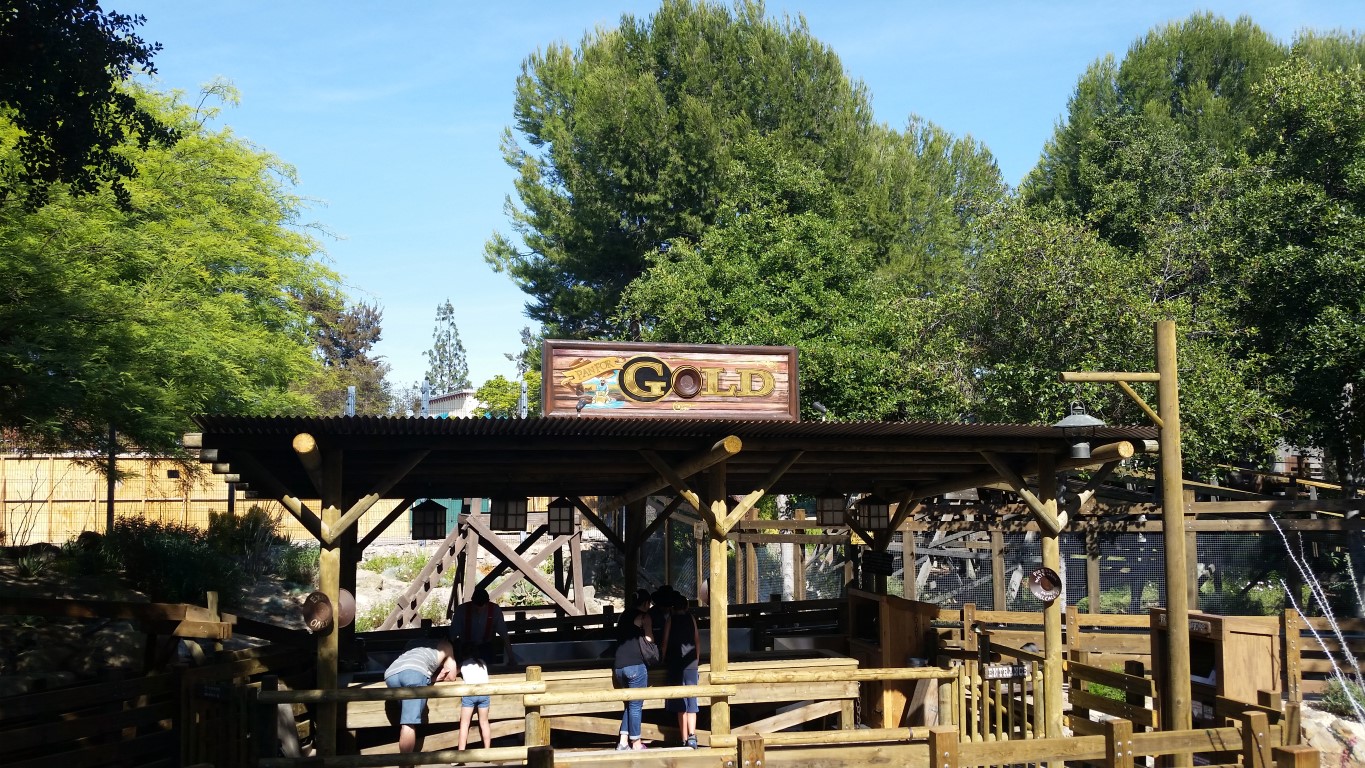 Right next to which the new line and fence are next to the pre-lift of GhostRider! In this picture you’ll see lots of fresh wood, but with the giant woodie in the back it really makes for an awesome looking area. 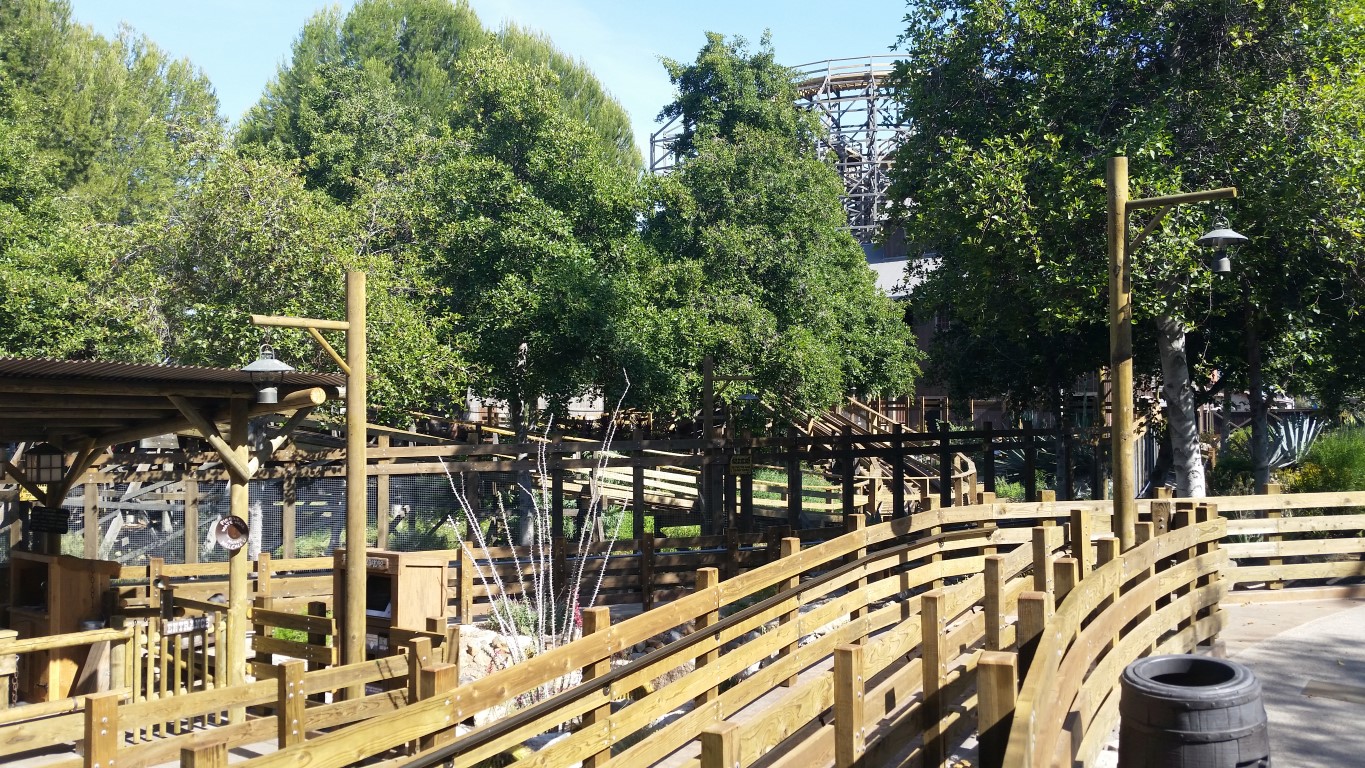 The GhostRider gift shop has also reopened by the way! 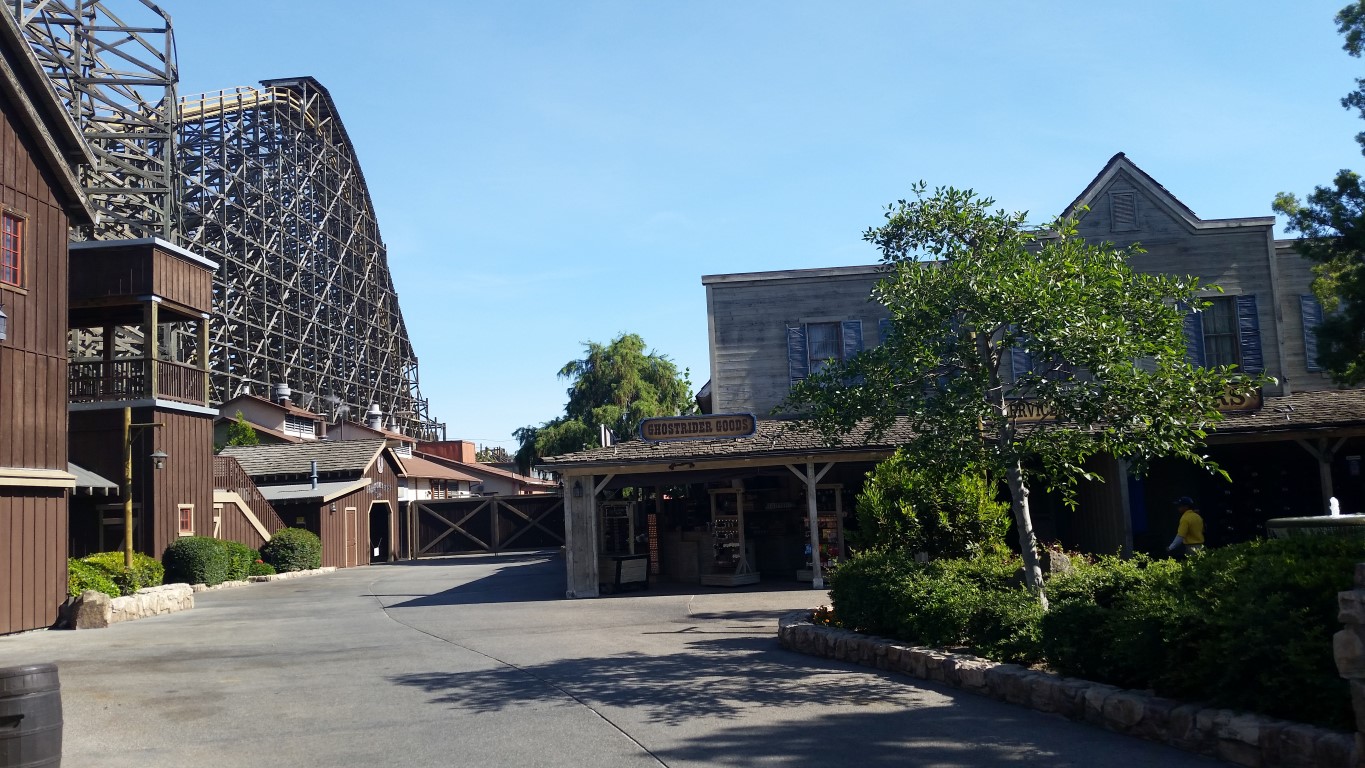 But let’s quickly discuss the amazingness we call GhostRider. (Well, as of today, with the new trains and track, you know?). GhostRider unexpectedly held a soft opening some 40 minutes before the park closed, and it was just heavenly! There may be more soft openings this weekend and next week, the ride officially (re)opens to the public on June 11th. 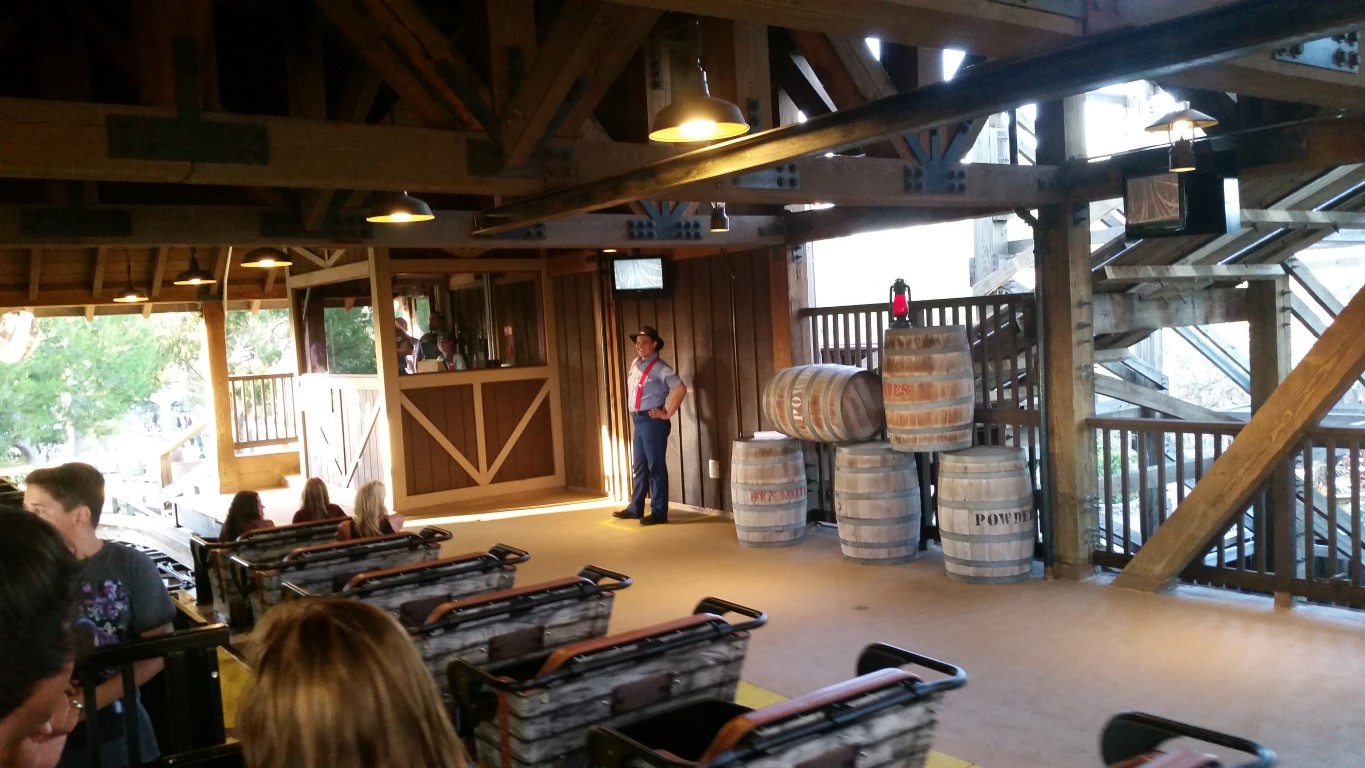 GhostRider’s new Millennium Flyer trains have firm seating rather than very soft seating, creating a bit of a different seating experience than the other Millennium Flyer trains. But these trains snake through the ride’s course like no other! And at a wonderful speed! Without the MCBR and with a lot less friction, the ride is a lot faster and a lot more airtime-filled. Unlike the speed, the banking has hardly been changed, creating for some unbelievably awesome and forceful lateral movements. Which become increasingly more apparent with the final helix being absolutely insane. All while being butter smooth. This is the way GhostRider was meant to be! We’ll have more GhostRider related posts this upcoming week! 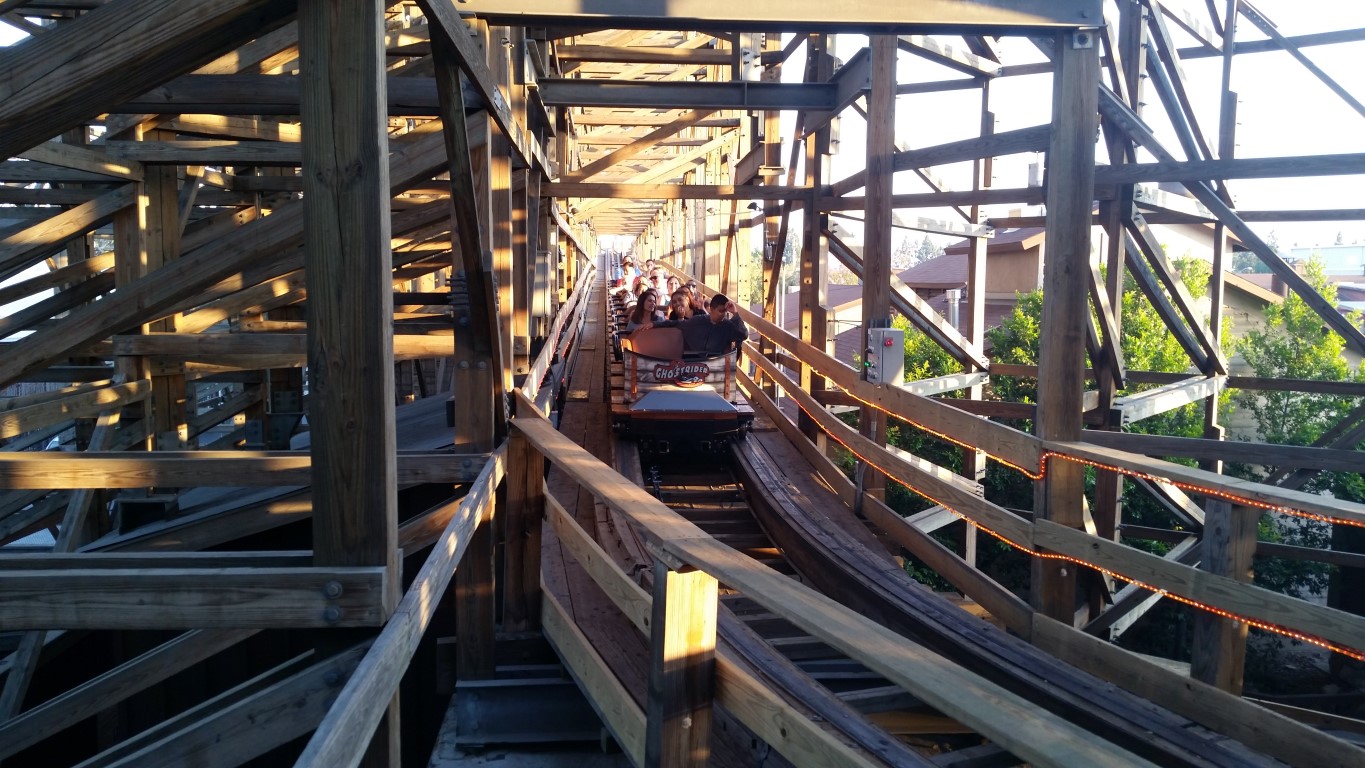 And we happened to be the first guests to experience the new GhostRider, and to our surprise the cameras worked too during the soft opening! Here’s the picture of (left to right top to bottom) Braedon from CoasterForce, Sean, Randy from the FUNnelcake Blog, and bottom right, me! (Sean from California Coaster Kings, in case you forgot what site you were on 😛 ) – Overall we had a great time, rode the front and the back.The back being more intense, especially the second half of the ride. The front being more airtime filled and throws you around more on several hills and lateral elements. Wherever you’re seated… it’s just awesome! 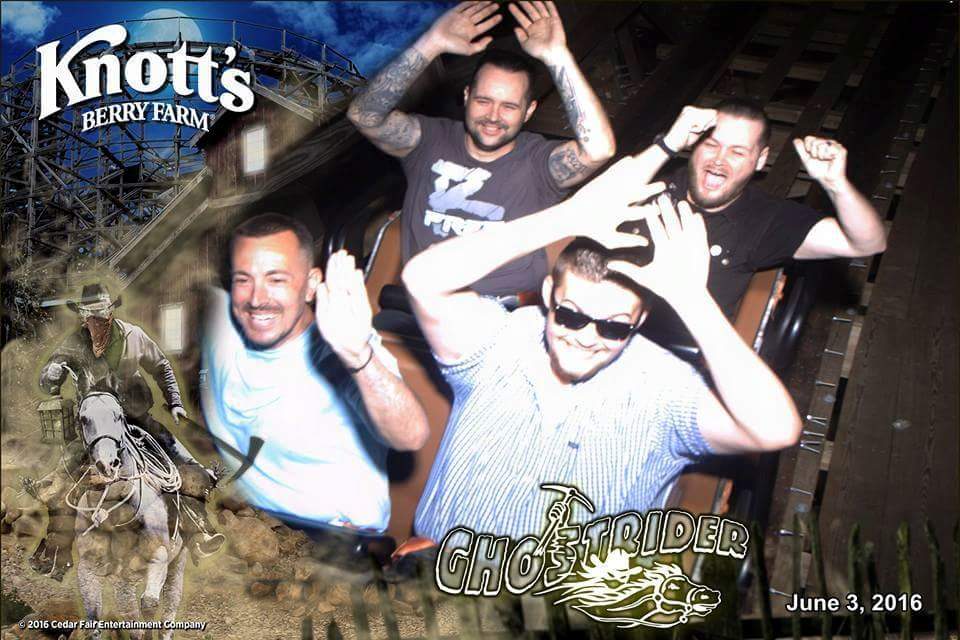 Thank you for checking out this Knott’s Berry Farm Update! We’ll be back with a lot more Knott’s Berry Farm, GhostRider, and Ghost Town Alive in a few days! Meanwhile check out some of our new updates, such as the Six Flags Discovery Kingdom Update from the same day, or the Six Flags Magic Mountain Update and our Python Plunge/Hurricane Harbor Update! 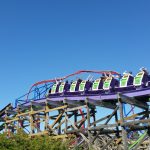 MORE AWESOMENESS: We also went live with a bunch of cool The Joker articles, as the newest coaster in California has now opened to the public! Read our following detailed works:

Check out our Pulsar review on our European Coaster Kings site! 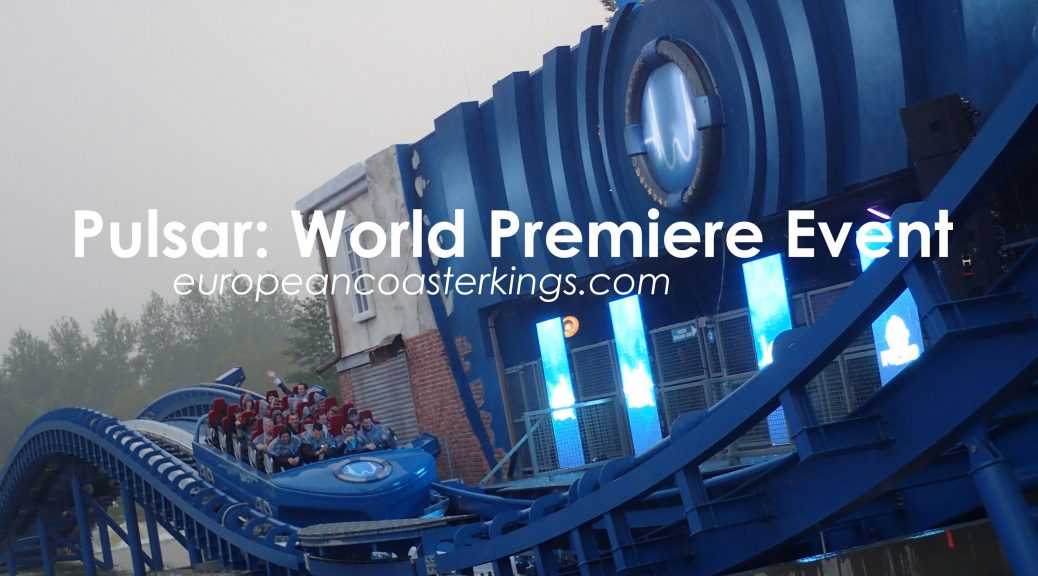