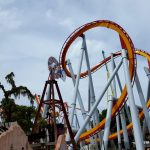 After a very large update last week, this week brings us an update that’s a bit easier to chew on. The park was busy as ever this weekend, which, of course, meant that lines were long. Unfortunately, two of the park’s signature attractions are down for maintenance/refurbishments, which doesn’t bode well for the crowds at other popular attractions. However, it’s always good to have work being done, making the park a more enjoyable place! Let’s get started, and check out this week’s progress at Knott’s Berry Farm!

Let’s start this Knott’s Berry Farm Update with the big guy, GhostRider. Before doing my park update on 4/24, I visited the park on both 4/22 and 4/23 to check up on GhostRider. Lots of work was being done on Friday and Saturday evening, the whole ride was covered with workers! They appeared to be doing everything from track work (installing steel rails) to adding more rope lights along the catwalks. 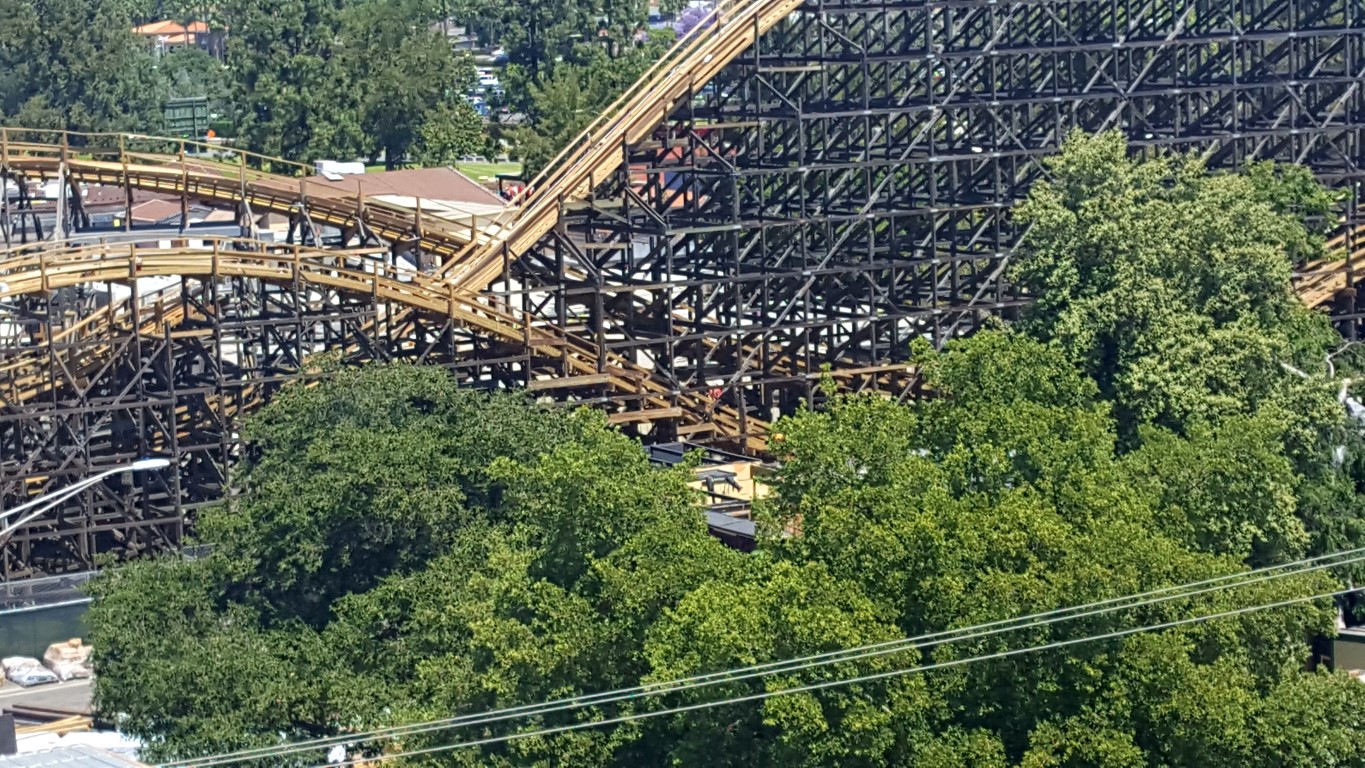 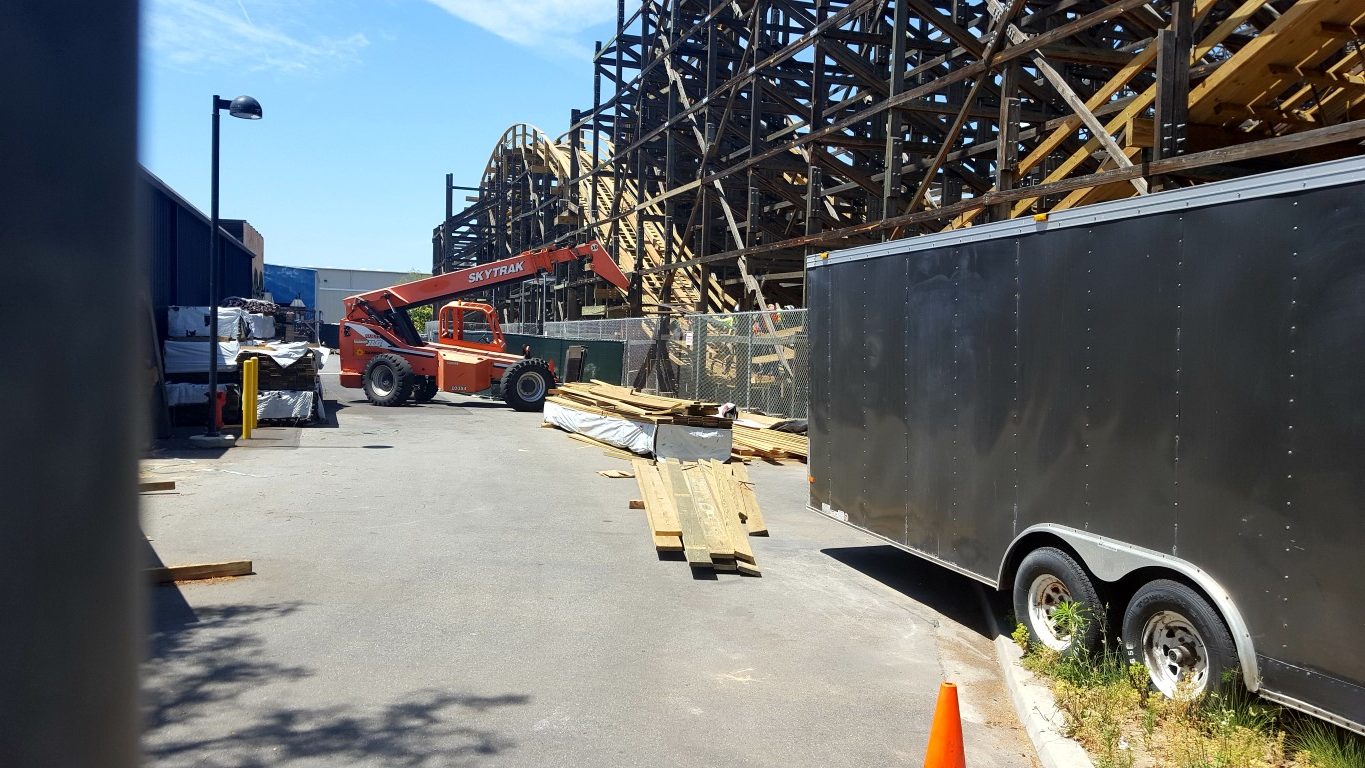 While I was exploring the construction, I saw a peculiar device sitting on the transfer track, which looked to include a few hydraulic systems. I couldn’t figure out what it’d be for, does anyone know? 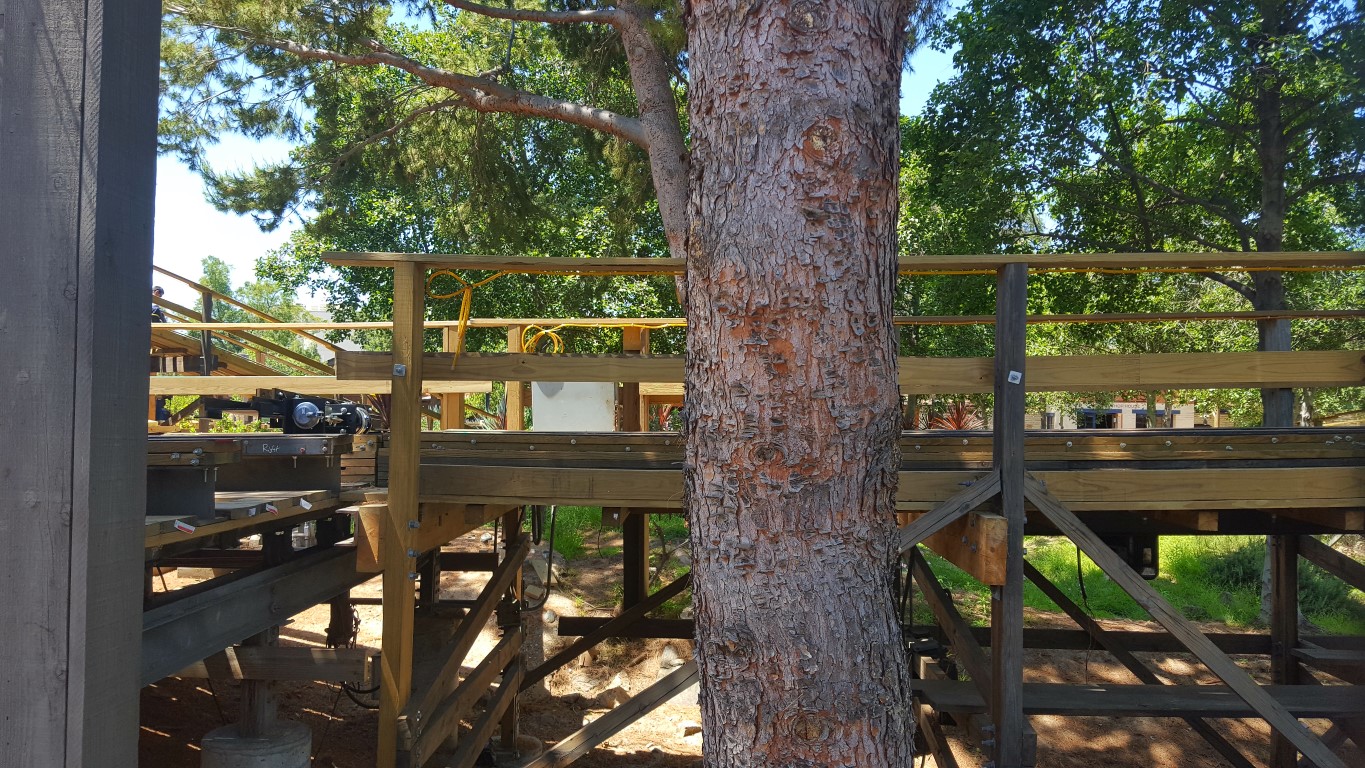 As I went into the park on Sunday, I immediately realized that quite a bit has changed since I was here last week. Starting at the Wagon Camp Theater, the stage remains unchanged, however the seating area is now filled with piles of unknown building materials. Hopefully that means more awesomeness in the near future! I’ll keep you guys posted, of course. 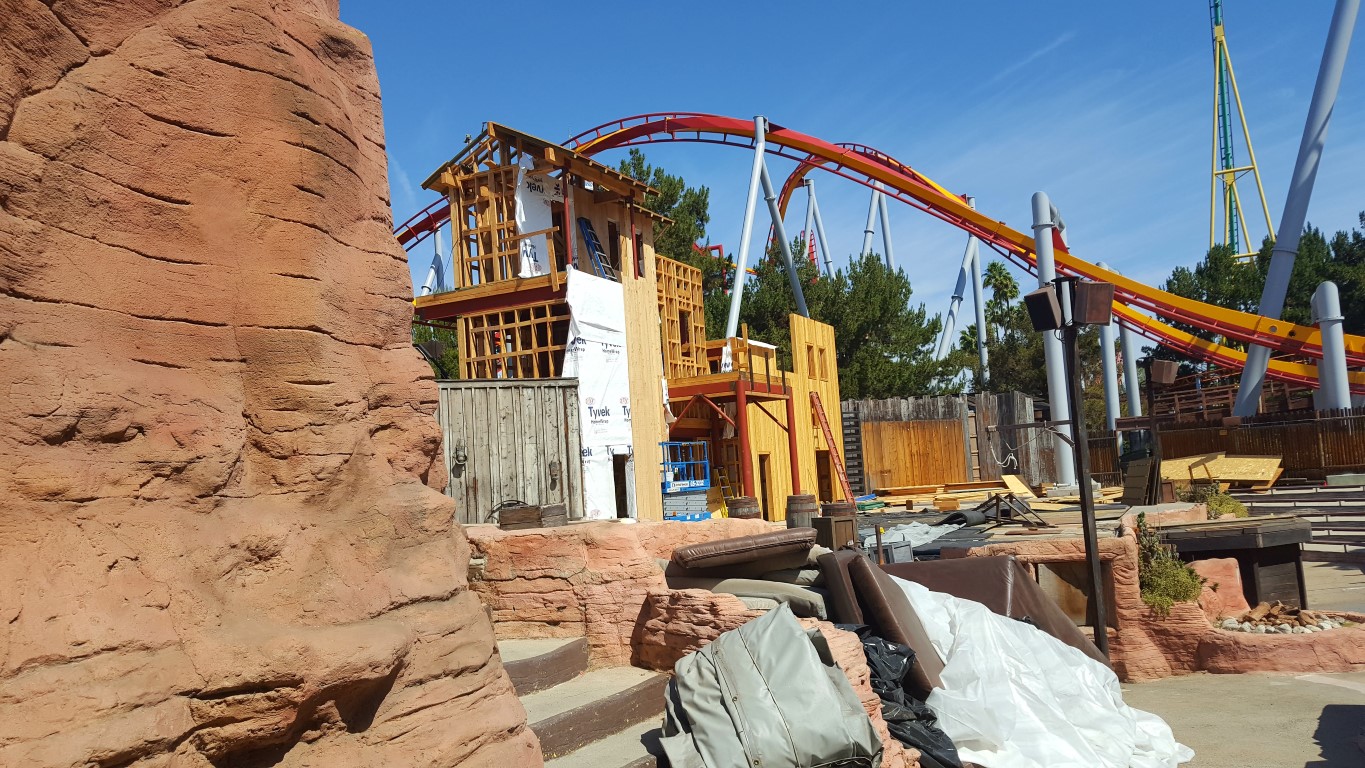 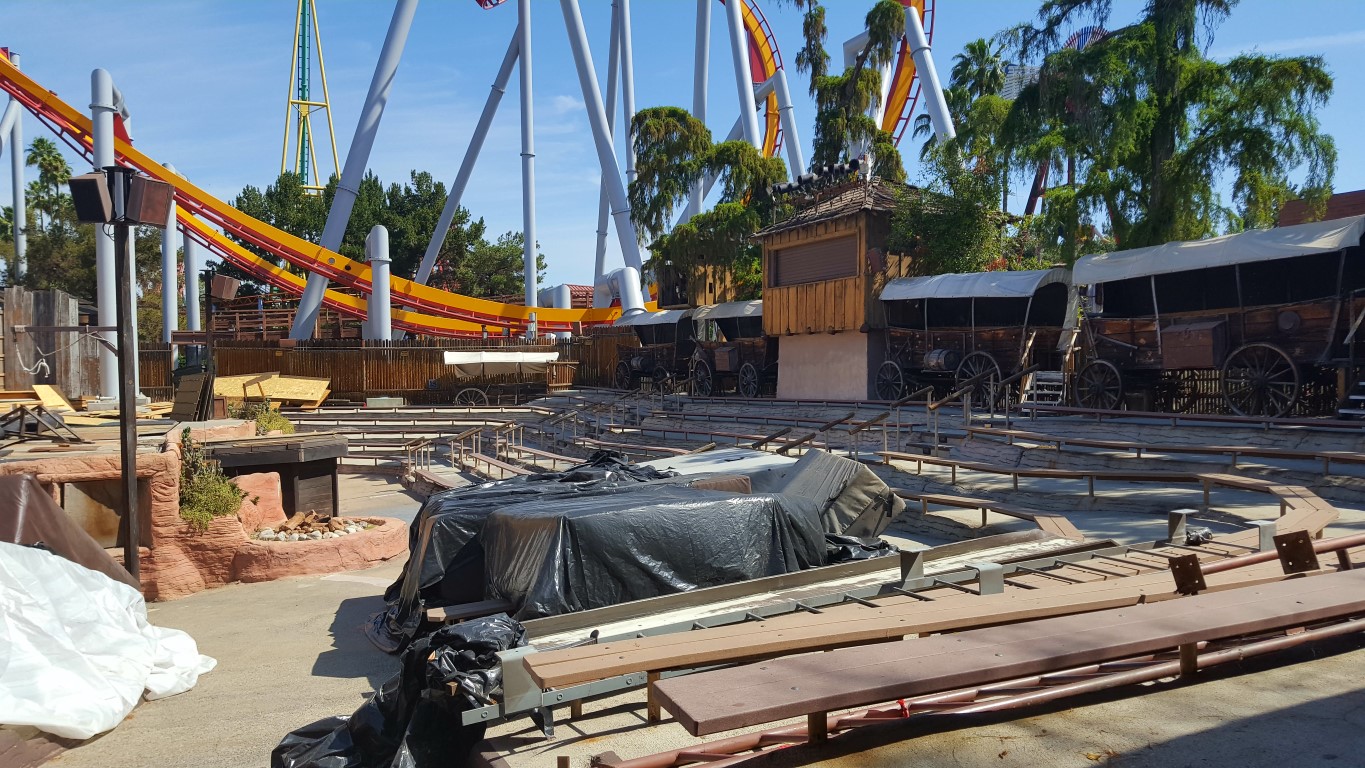 The former panning for gold site has also been finished, and we can now see that it will live a new life as a nice, desert-themed planter. 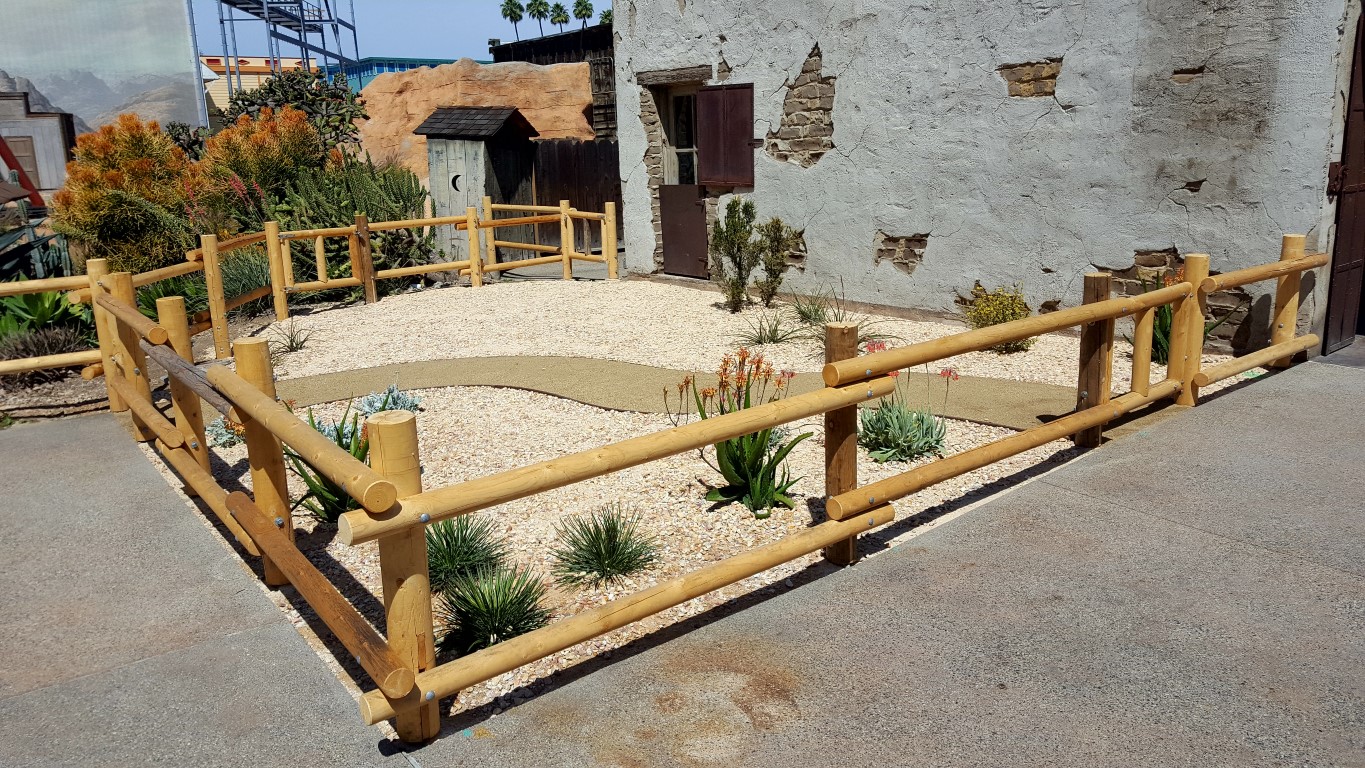 Speaking of planters, it looks like the former site of Riptide will also be receiving some landscaping very soon. As you can see, all of the construction walls are still in place, however there have been dividers planted into the ground for future foliage. 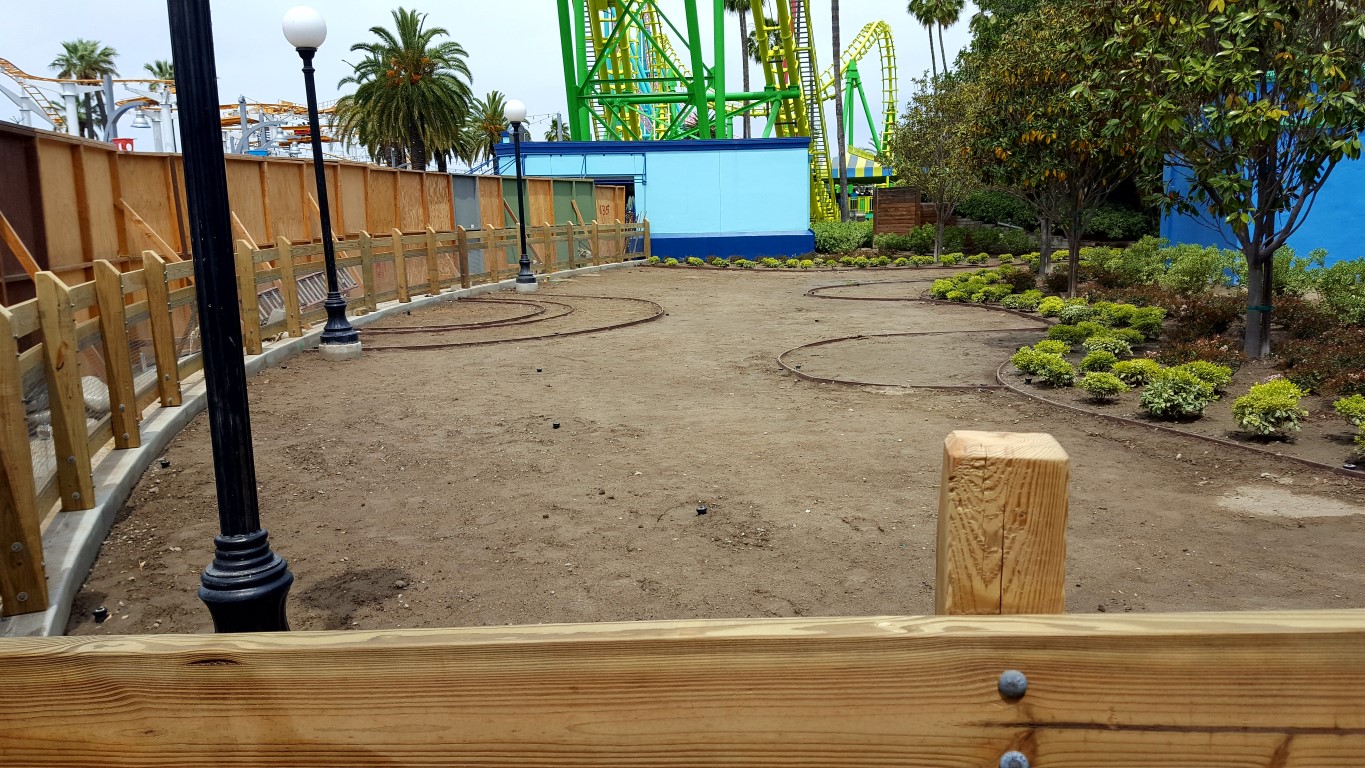 While I was at The Boardwalk, I noticed that Xcelerator was unfortunately closed. I found that interesting because the purple train was just sitting on the storage track, fully assembled. While I wasn’t able to grab a picture, there did appear to be some work going on in the station. Xcelerator will reopen from this refurbishment on April 29th (this Friday). 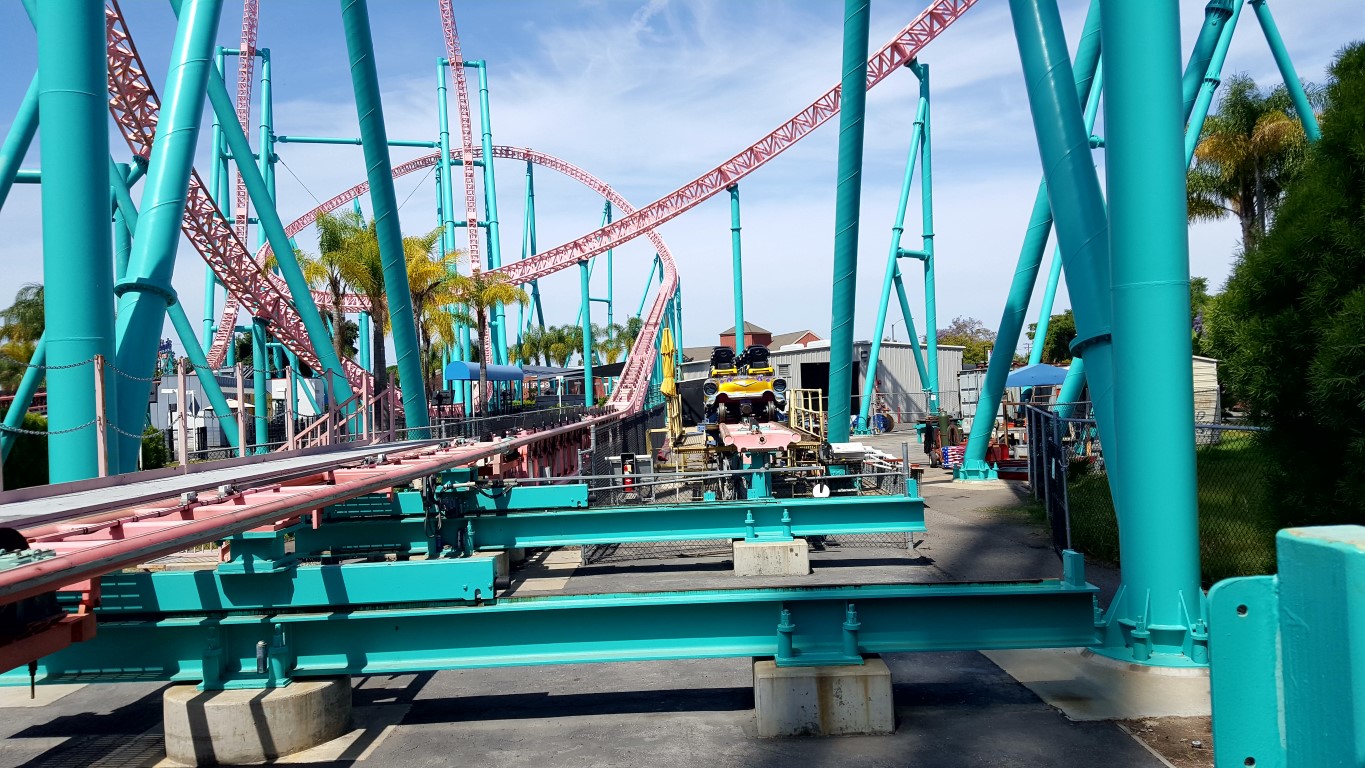 Next, I went over to visit Jaguar, which has made quite a bit of progress this week! Most of the 2nd half of the ride has been fully painted, from the top of the 2nd lift all the way up to the brake run. 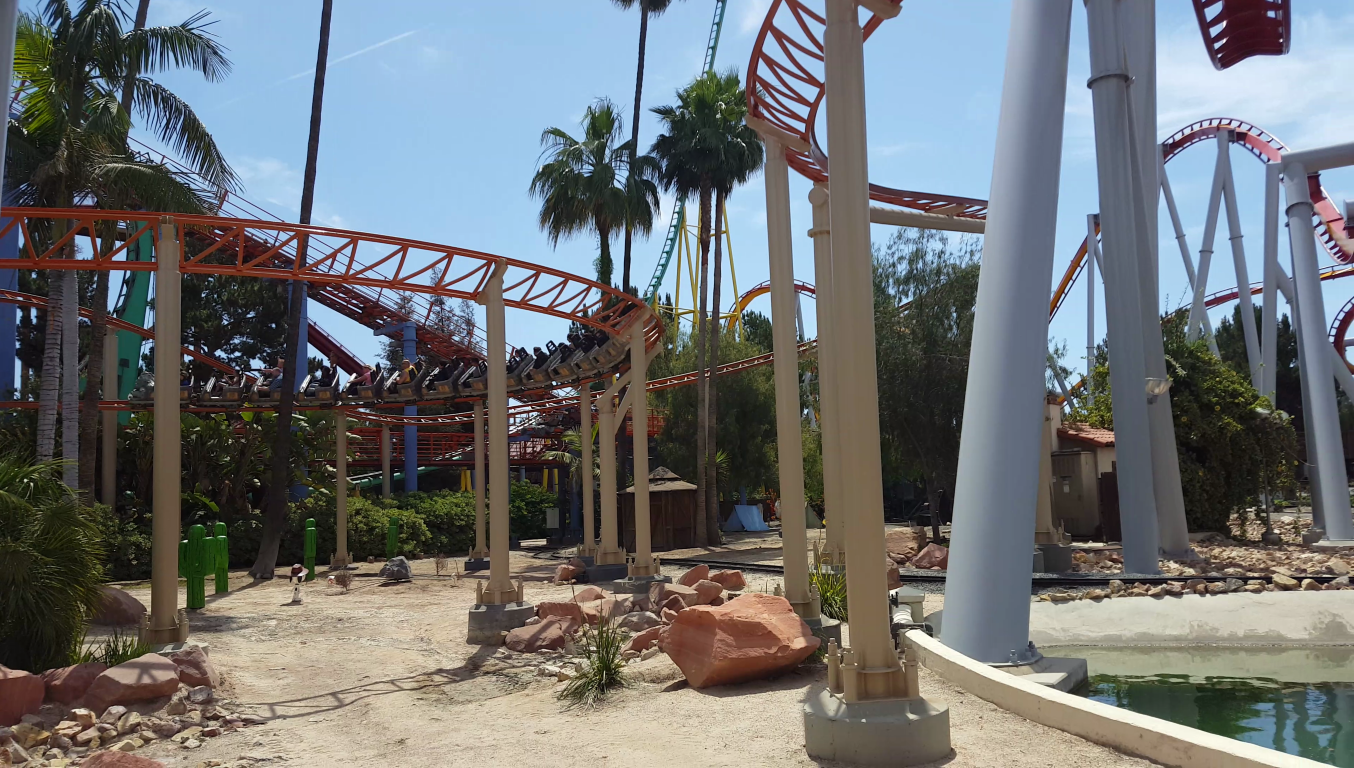 Additionally, the helix over the main entrance has been painted, along with two columns at the top of the first lift. 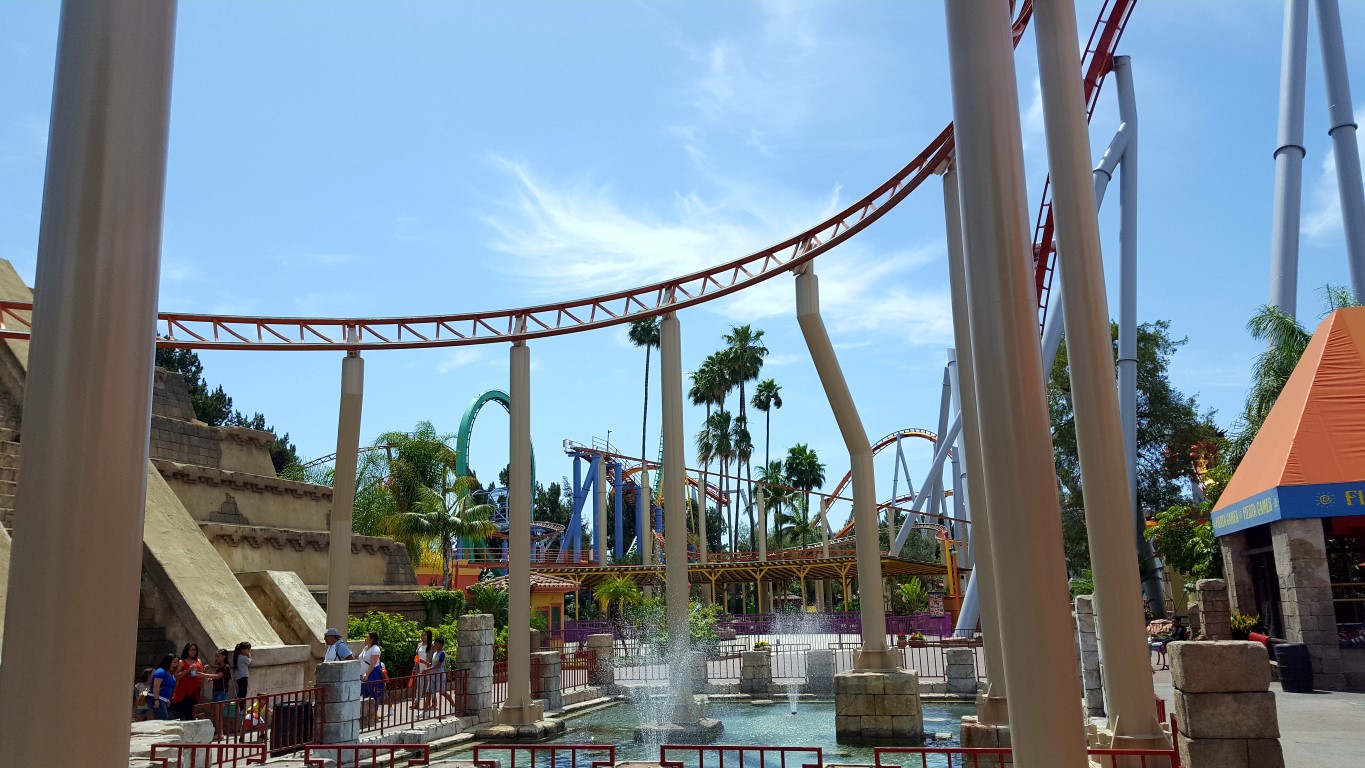 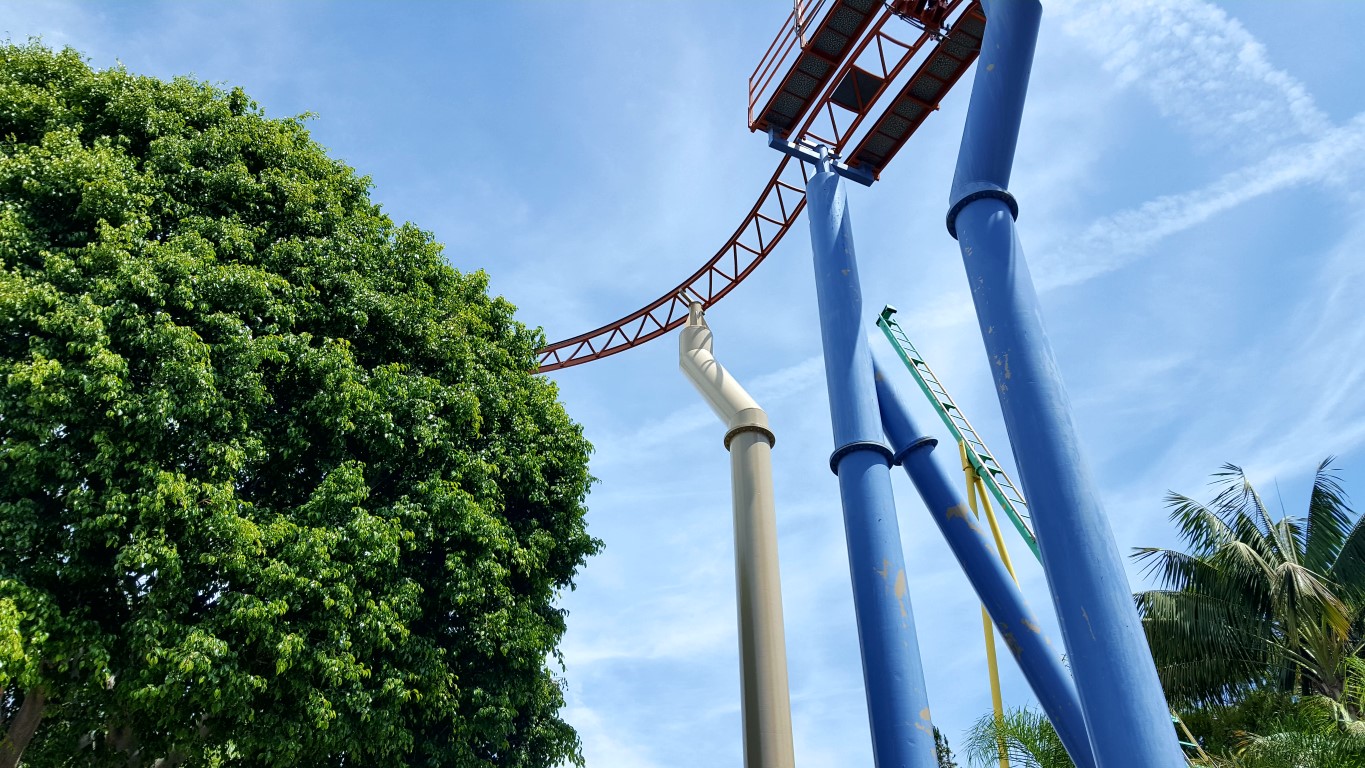 Many of the supports have also received a coat of paint just above their footers, presumably just primer or a first coat. 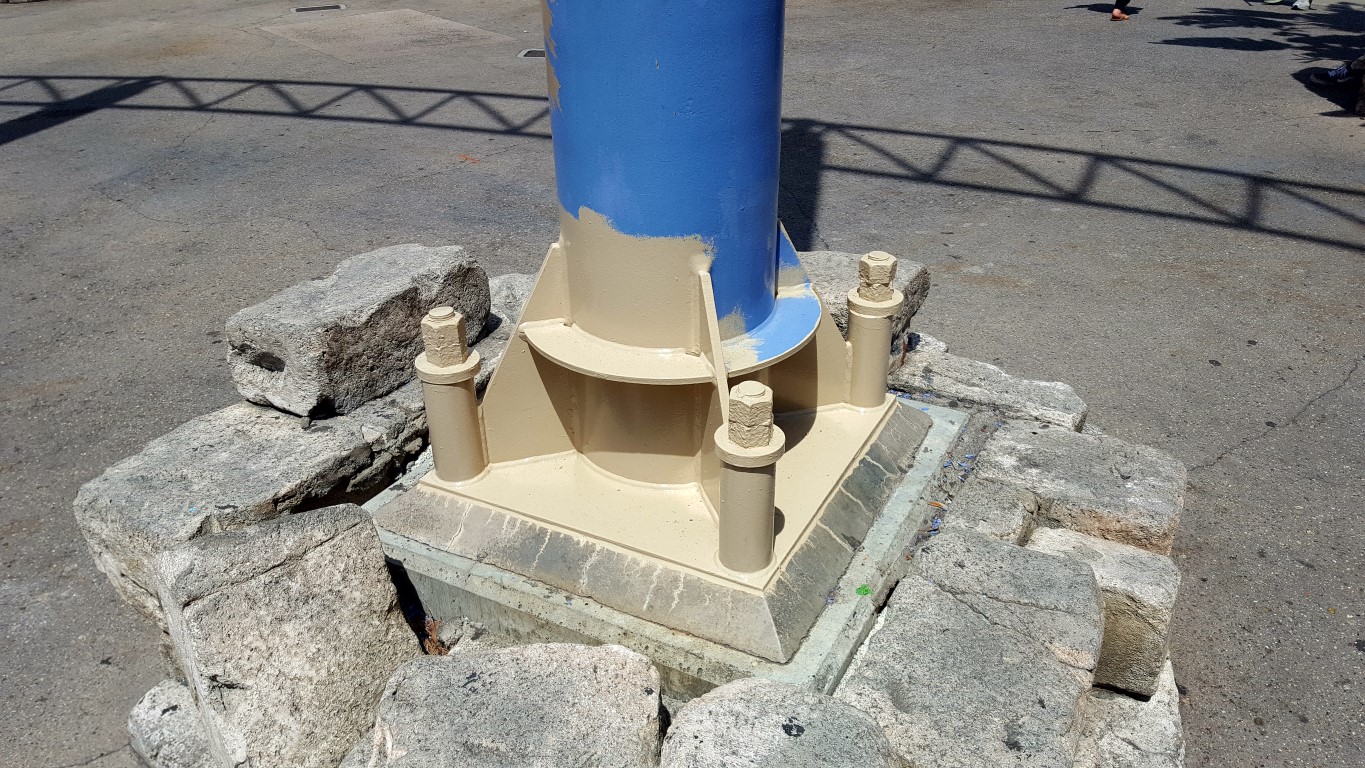 Last but not least, I visited the Calico Stage, which is now starting to look like a stage! We can see that steel has gone vertical, and the first maintenance/lighting catwalks have been installed. 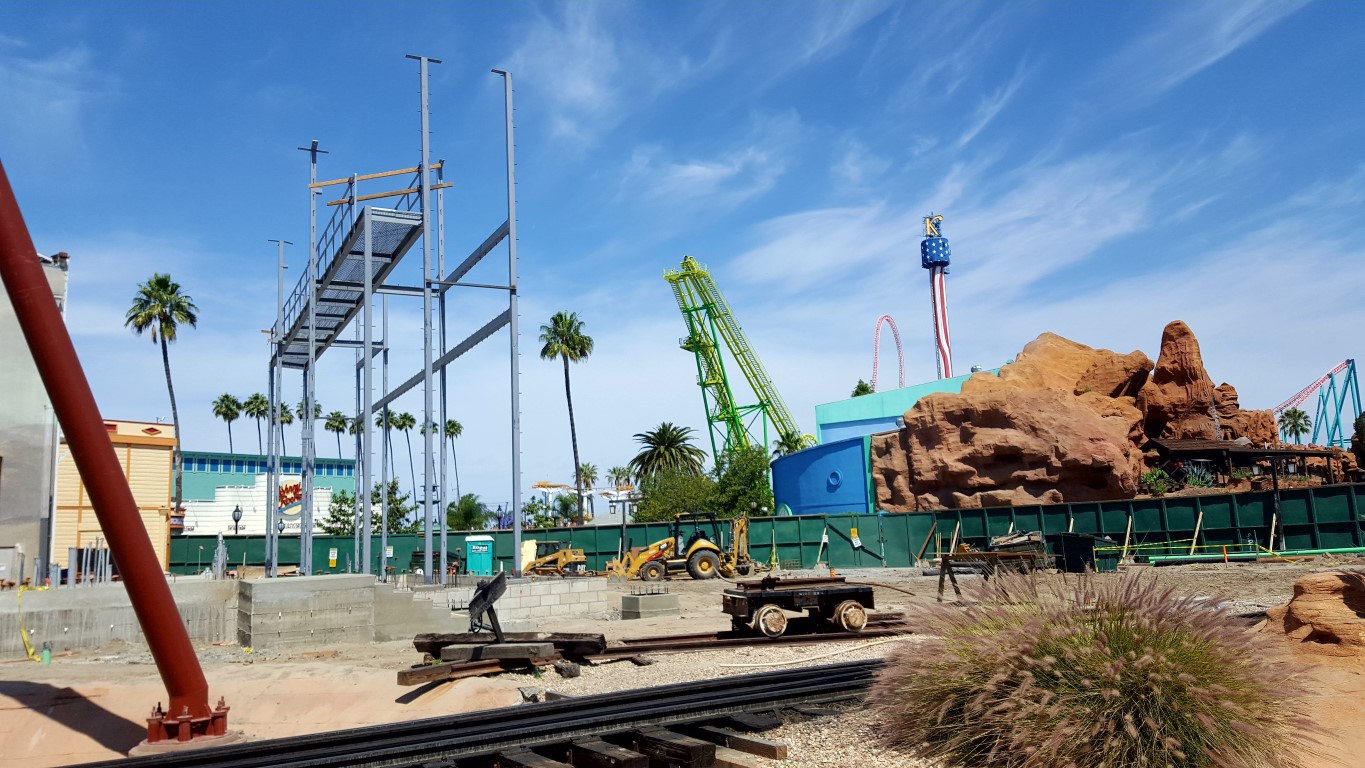 The dressing room facades have also received their paint! I personally believe they aren’t finished yet, as I think we could see some signs (i.e. “Saloon”, “Bank”, etc) could be added. This is purely speculation, though. 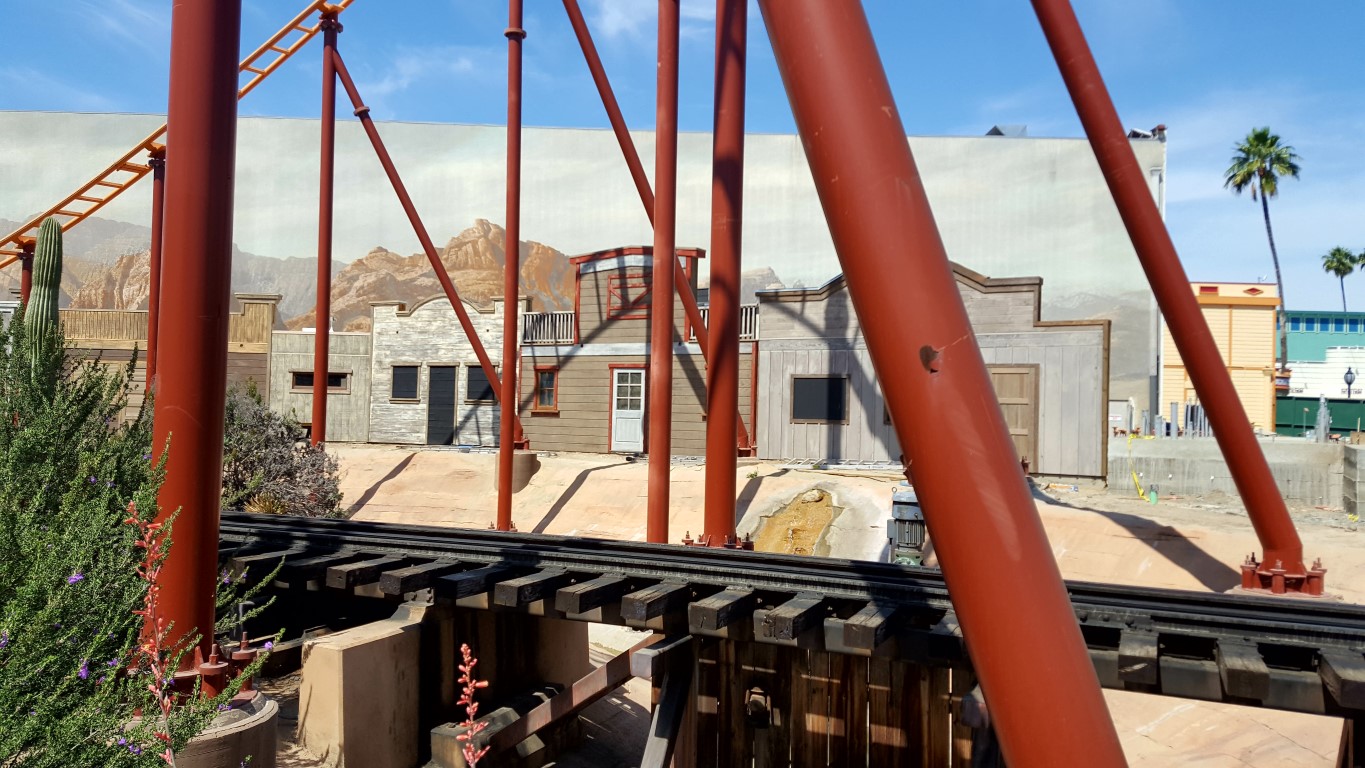 That’s all I’ve got for this week, hopefully I’ll be back soon with more progress from around the park! Maybe we’ll even see some GhostRider trains in the coming weeks? I guess we’ll just have to wait and see. 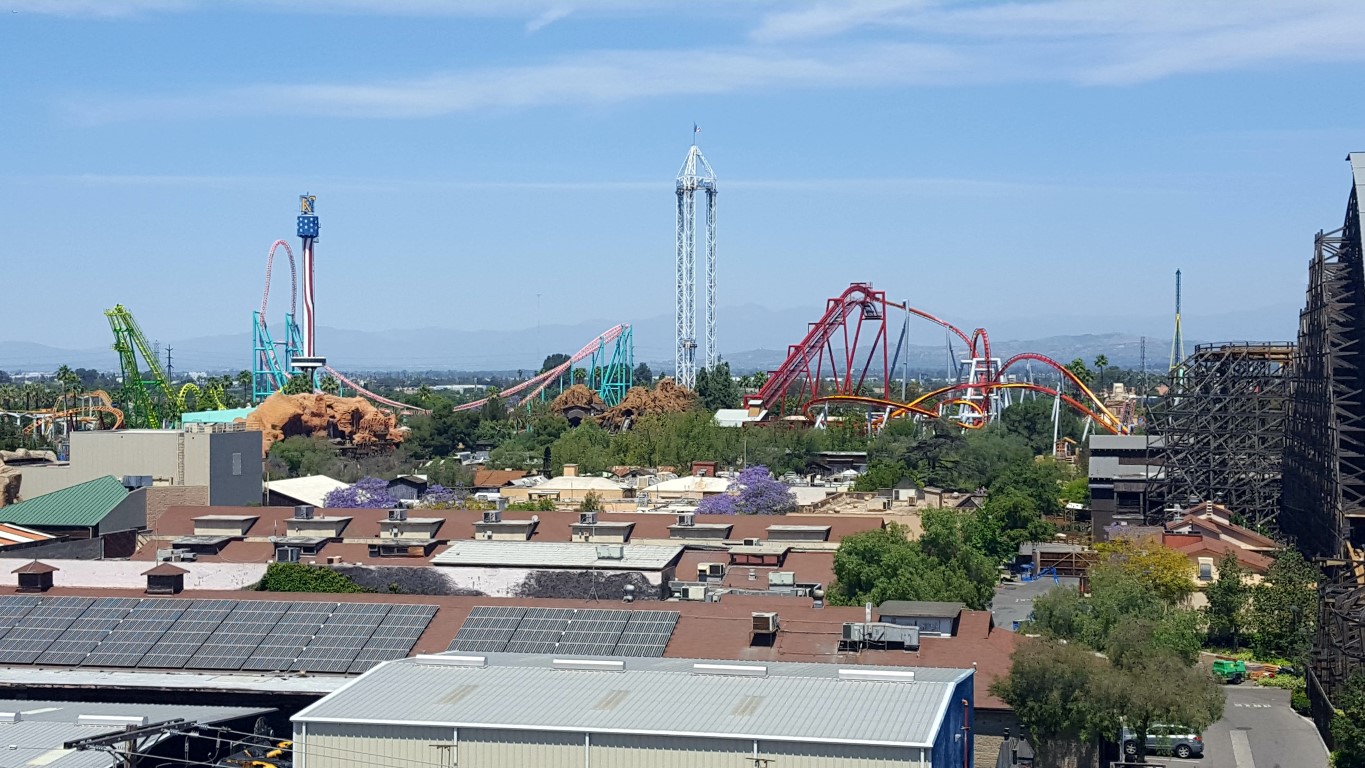 We have also created a video recap! Watch it and let us know what you think!

Thanks for checking out this brand new Knott’s Berry Farm Update! Check out our California’s Great America Update from the day prior!

AND OF COURSE: Check out our HUGE The Joker Tour Report! As well as our New Revolution Opening Report!