Holiday Park, located in Germany is a sister park to Plopsaland in Belgium and is renowned for its world-class Intamin megacoaster: Expedition GeForce. There’s a lot more to see and do in the park, but a trip to this smaller sized park, is worth it for a ride on the coaster itself.

The park is located in Haßloch, Germany, not far from other local parks, Tripsdrill and Schwaben Park. It’s easily accessible by car or also by train and shuttle bus- and upon arrival to the park you are greeted with this rather grand entrance, incorporating a traditional German building design and stain-glass windows, as well as other theming elements. 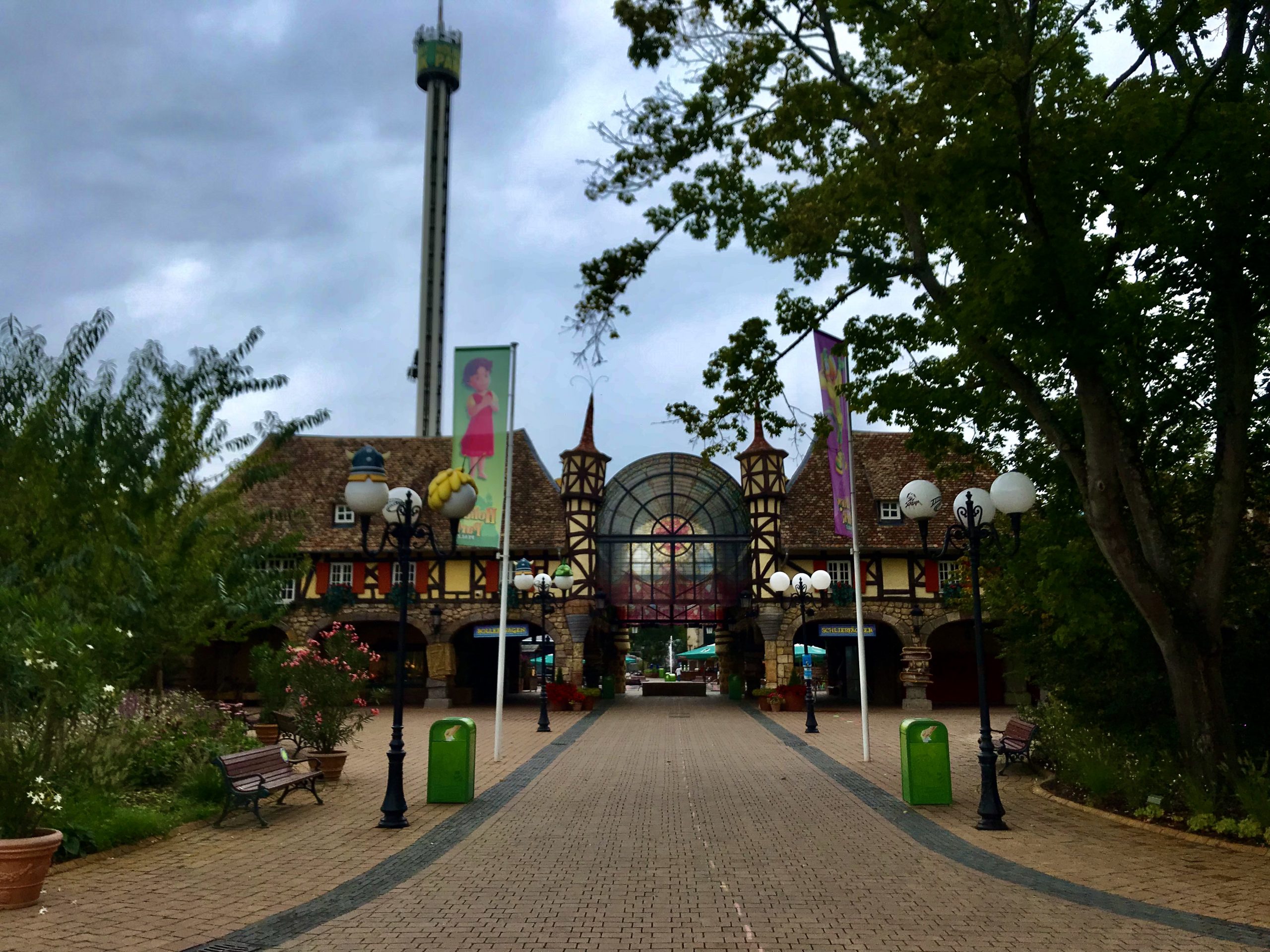 The park had really gone the extra mile with their covid-measures. From mandatory masks in all queue lines, indoor areas and on certain attractions, regular disinfection of attractions and forcing riders to sanitize before boarding attractions with frequent touch-points. They had even split the entire park’s pathways into a one way system. This meant you didn’t have to be constantly walking into people the whole time! 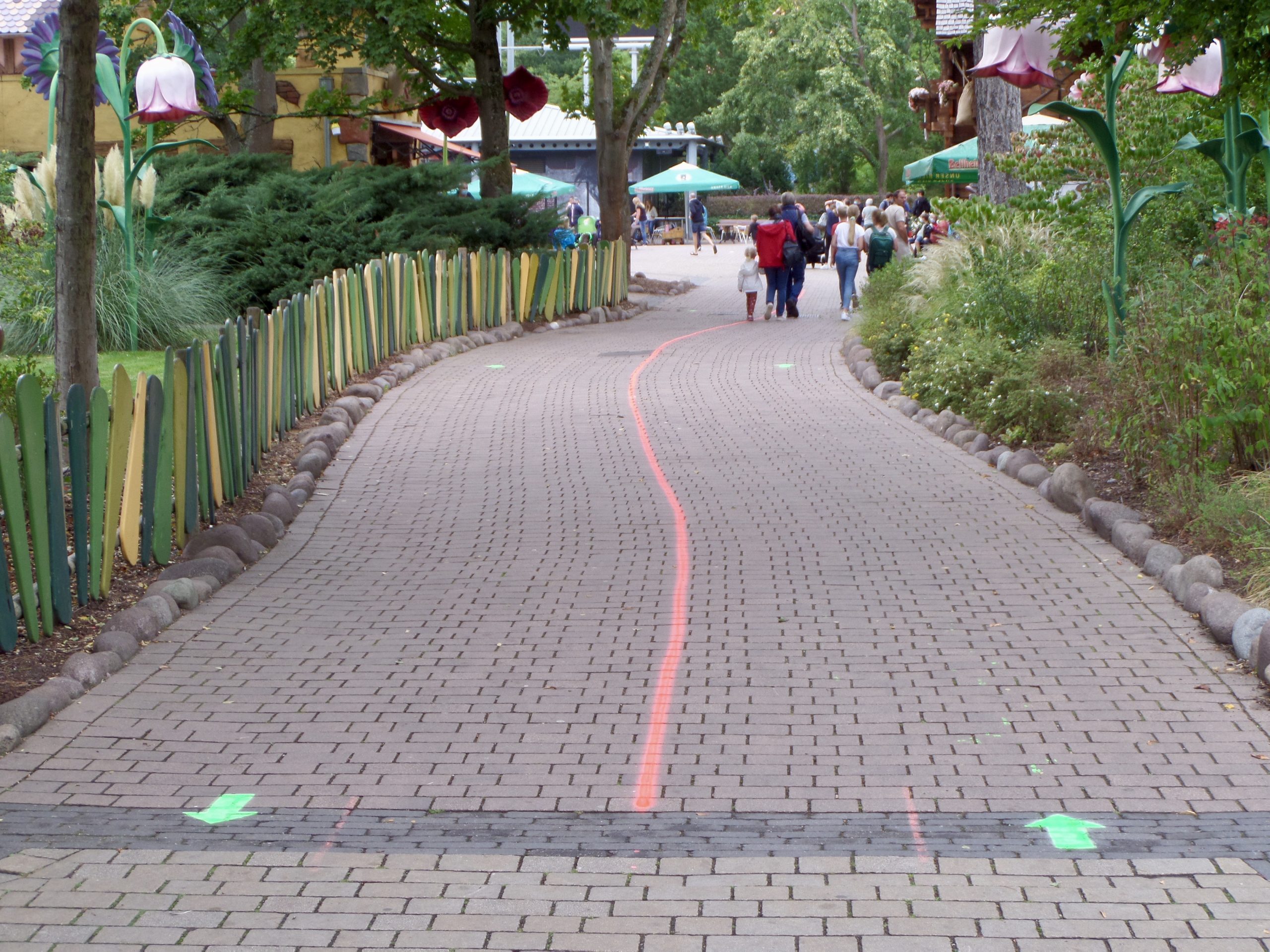 This park is particularly well known for its 2001 Intamin megacoaster, which we will get into later, but it also has another “stand-out” attraction. This is a Premier Rides Sky Rocket II, which opened in 2014. The actual ride has a horror theme, but can also be seen from several different viewing spots around the park, including from the beach themed area and from across the lake. The park has several very well-themed areas, including traditional areas for the Plopsa parks such as Heidiland and a Maja themed area. 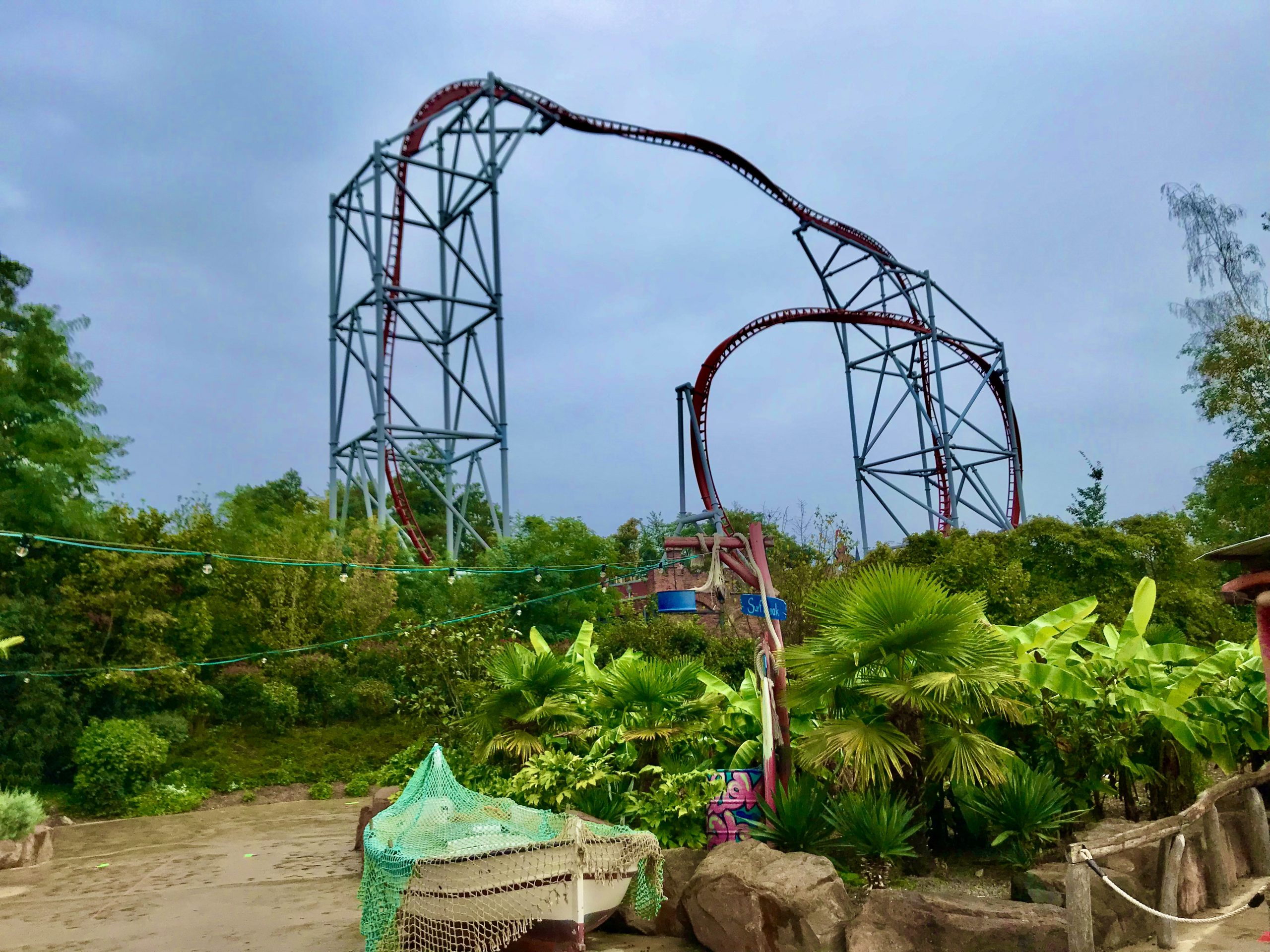 As I just touched on above, “Sky-Scream” has a horror theme and a very detailed queue-line with various effects and animatronics. The queue line wasn’t quite as scary as expected, perhaps the lighting was brighter than usual due to social distancing markers on the ground. Therefore we found the age restriction of 14 and up somewhat questionable. The actual rollercoaster itself is the same as any other Premier Rides Sky Rocket II. They are quite nauseating! This one was no different; you start off by launching forwards, accelerate backwards and then launch forwards again. You then get a lot of hang-time through an inline twist before plummeting towards the ground and finishing the rest of the circuit. Somewhat short, but a fun experience nonetheless. 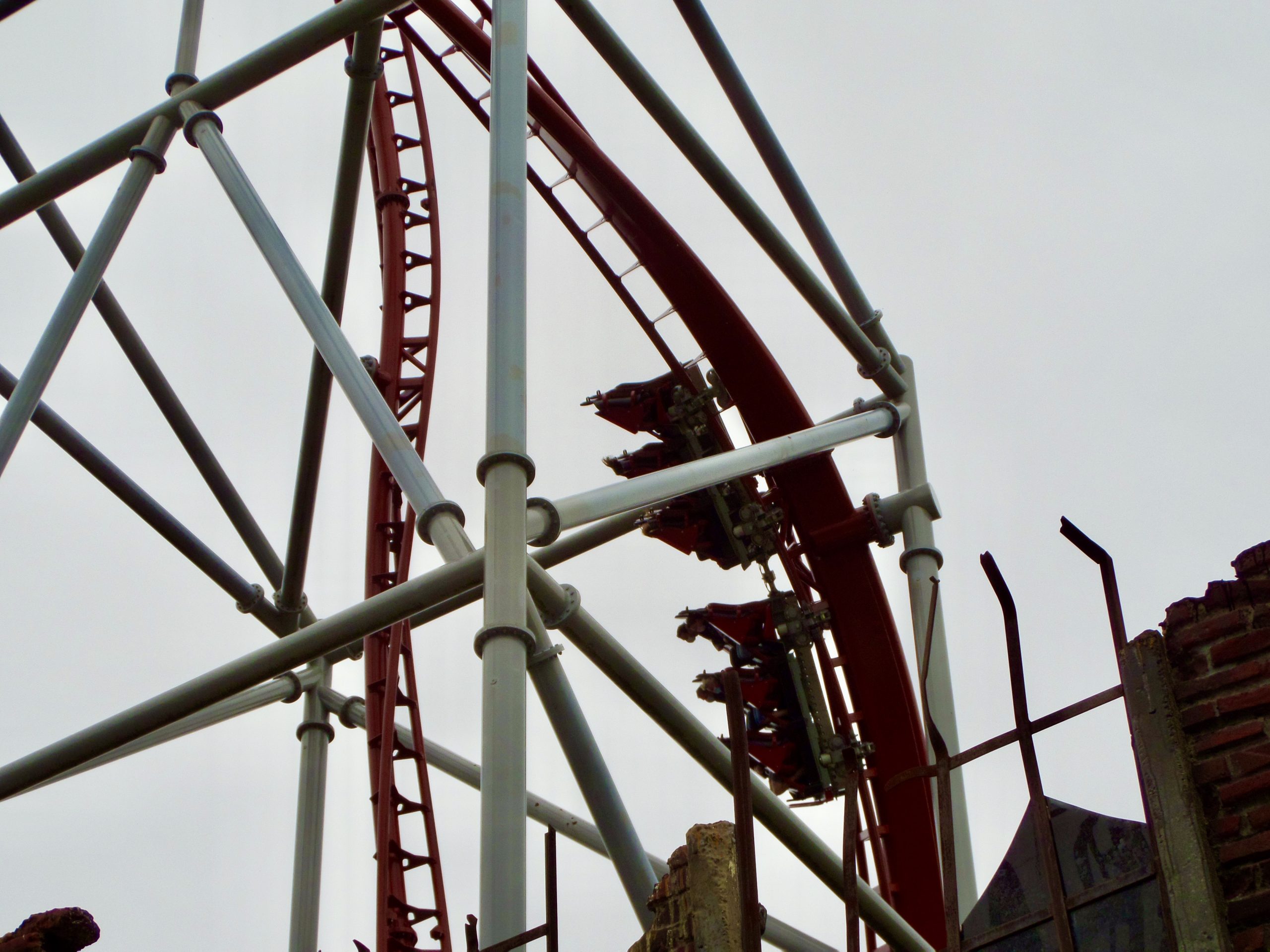 The park features an indoor section, which is known as “Holiday-Indoor”, but is themed to Studio 100 characters, Heidi, Tabaluga and Mia & Me. Unlike sister park Plopsaland though, which has a GCI woodie, Holiday Park has a Zierer junior coaster. You get two laps on this one, and it has some really lovely winter style theming and lighting around the circuit! 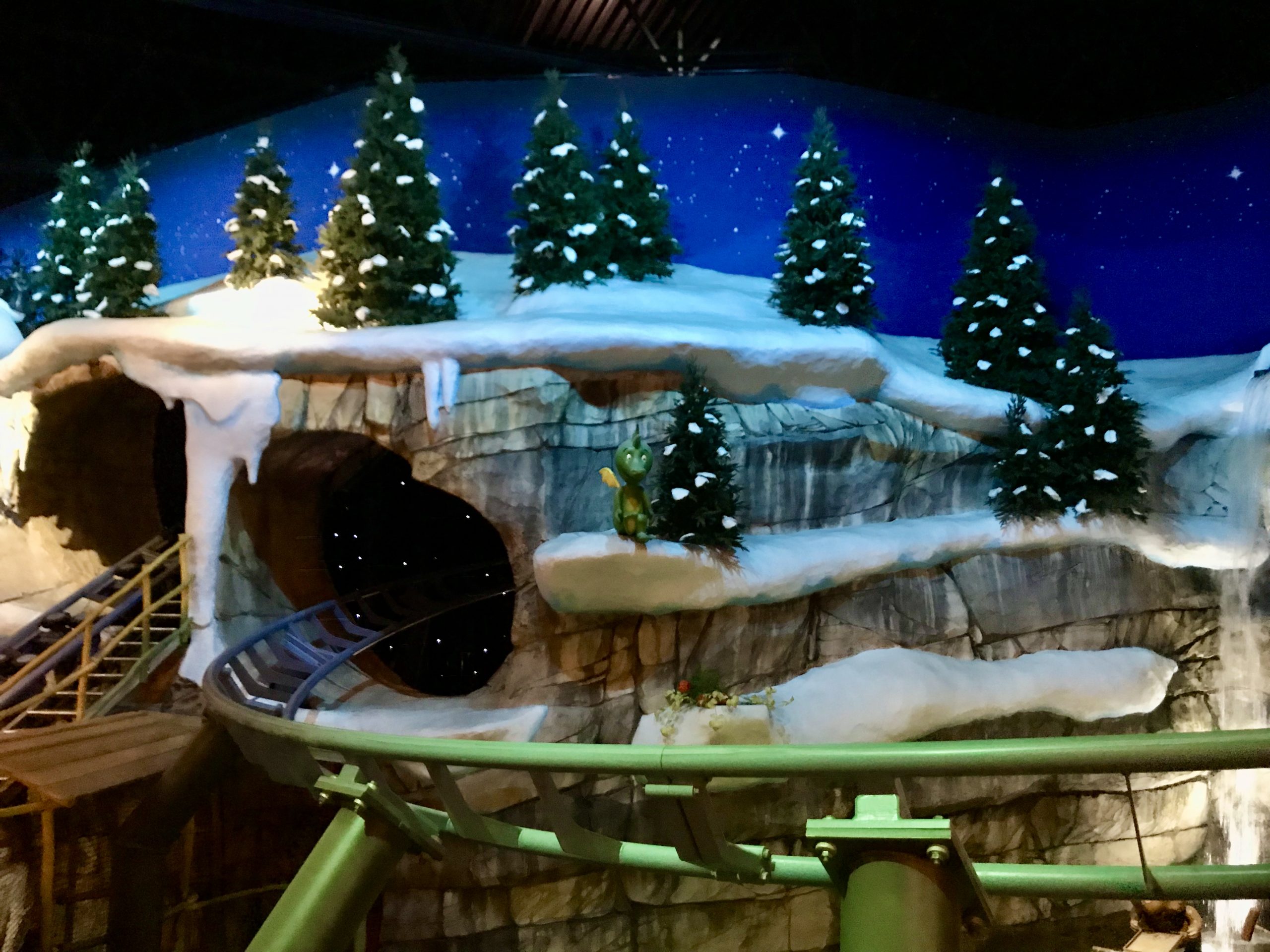 The indoor area also features a play area for kids, a carousel and various shops and catering outlets. It also featured this unique flat ride below, where you use the handle in front of you to raise up and down and your car swings from side to side! It was certainly a new and unique experience and therefore re-rides were required! 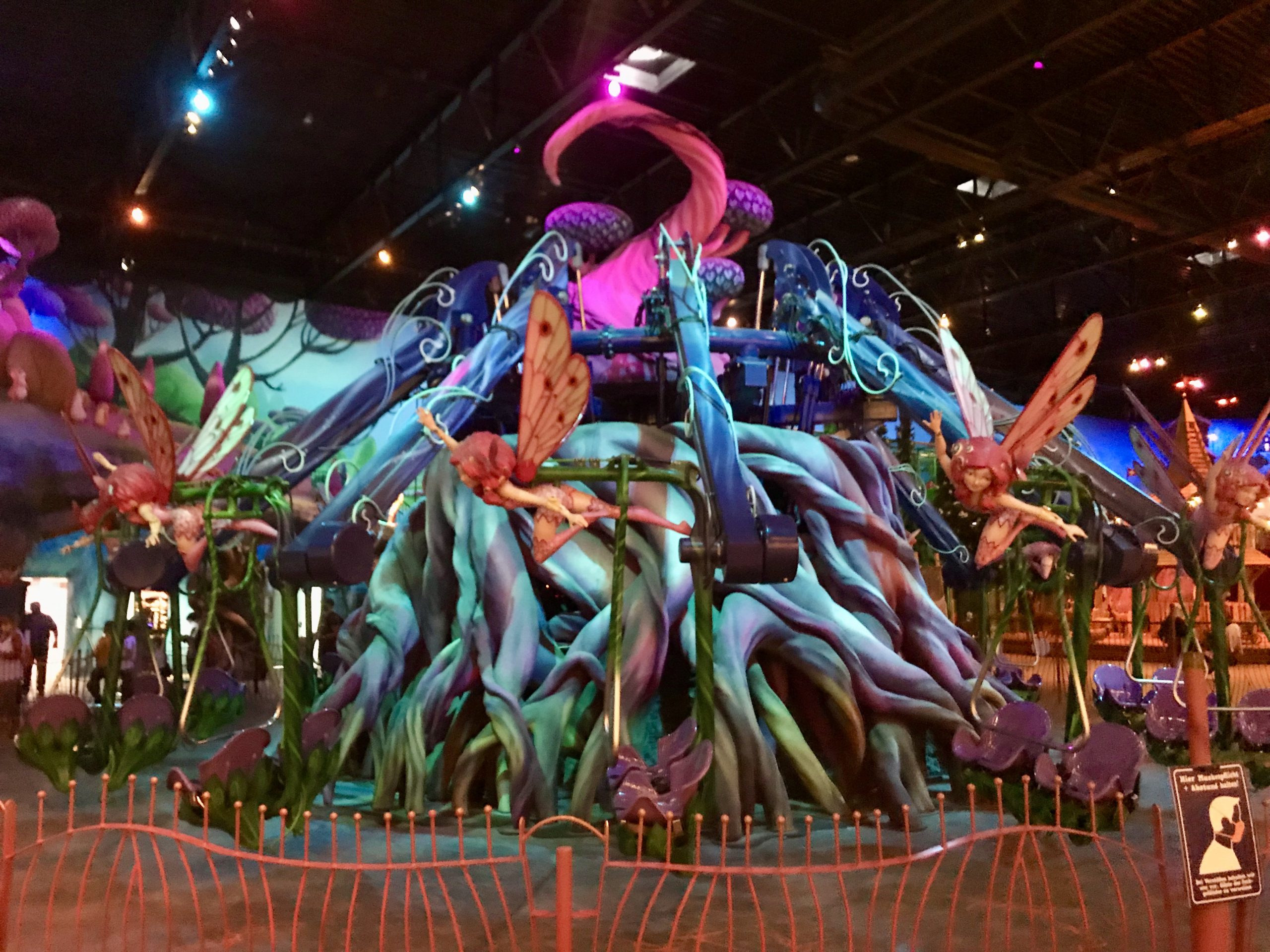 Despite the current virus situation going on worldwide right now, the park are still determined to expand and progress. They are currently building a brand new area known as ‘Wickieland”, which will be identical to the one at Plopsa and feature a Zamperla Disko. We know some enthusiasts consider these as a rollercoaster and others consider as a flat ride- what are your thoughts? 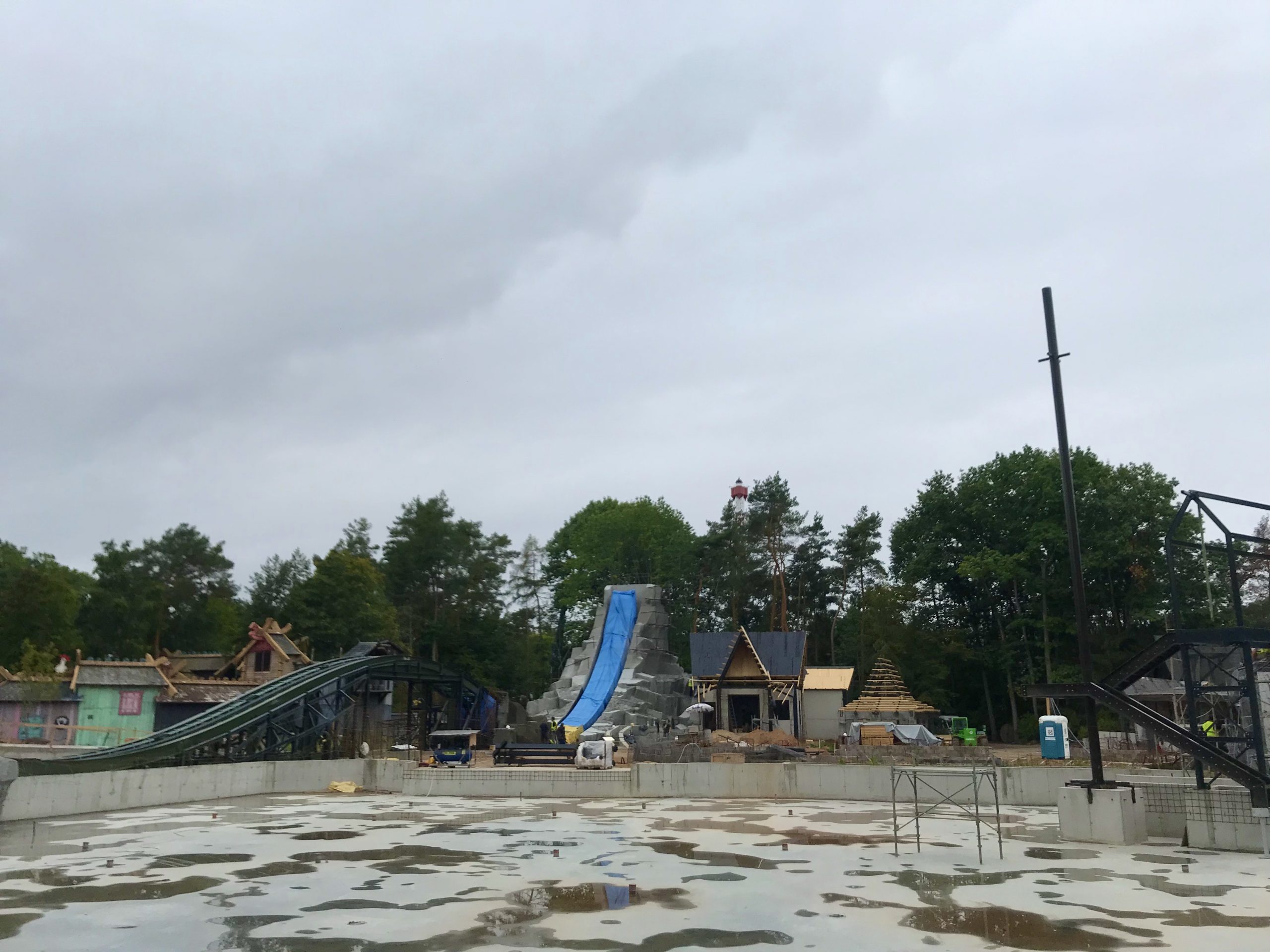 To further emphasize the amount of investment the park are going to right now, new for 2020 was “Dino-Splash”. This is a refurbishment of their river rapids ride featuring awesome animatronics, effects and sounds! 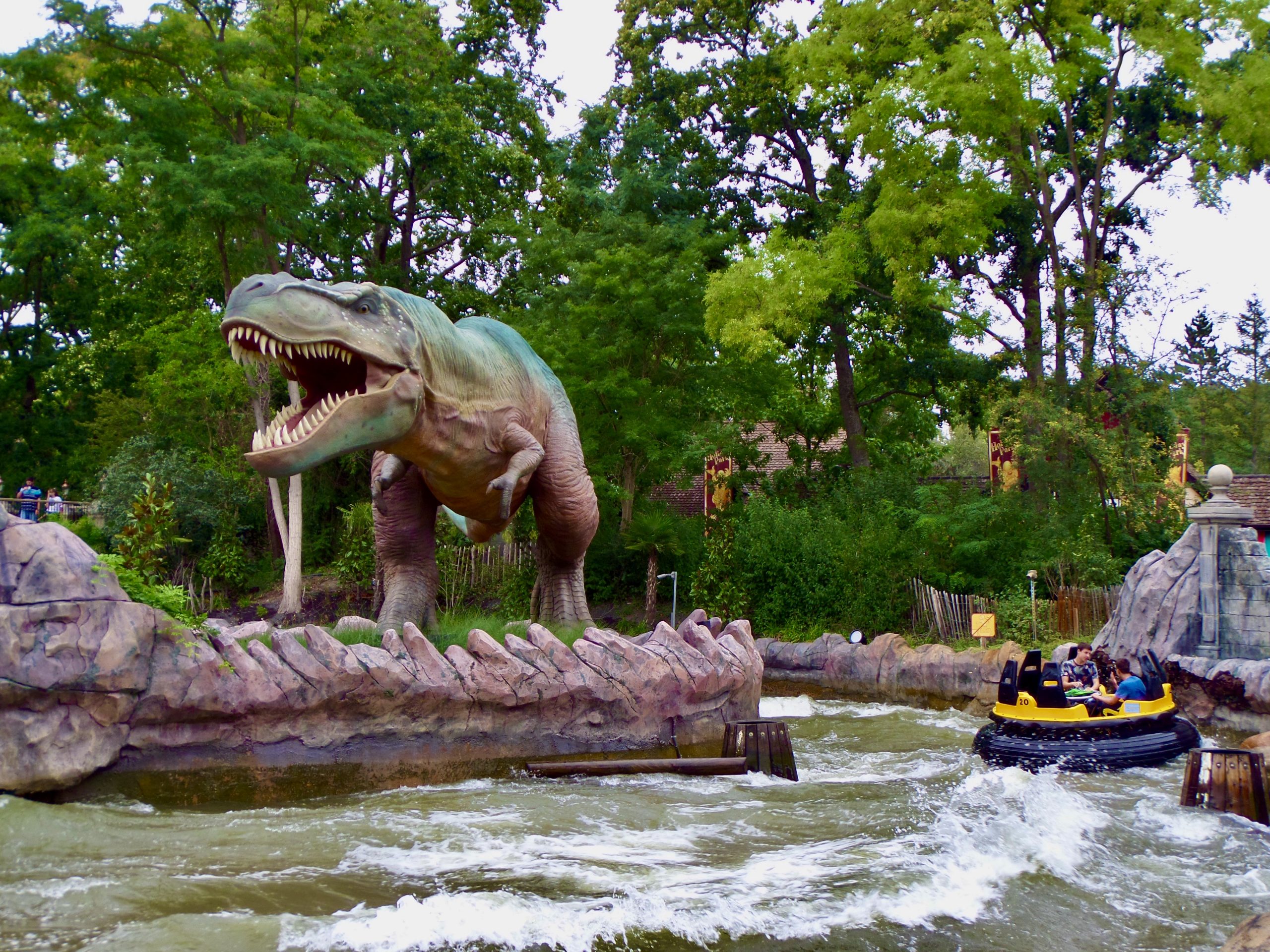 The park also features various flat rides. These include a star-flyer, a Gerstlauer sky-fly and a free fall tower called Anubis. This diverse selection of flat rides complimented the overall ride line up nicely. They also had lots of different flat rides for kids. 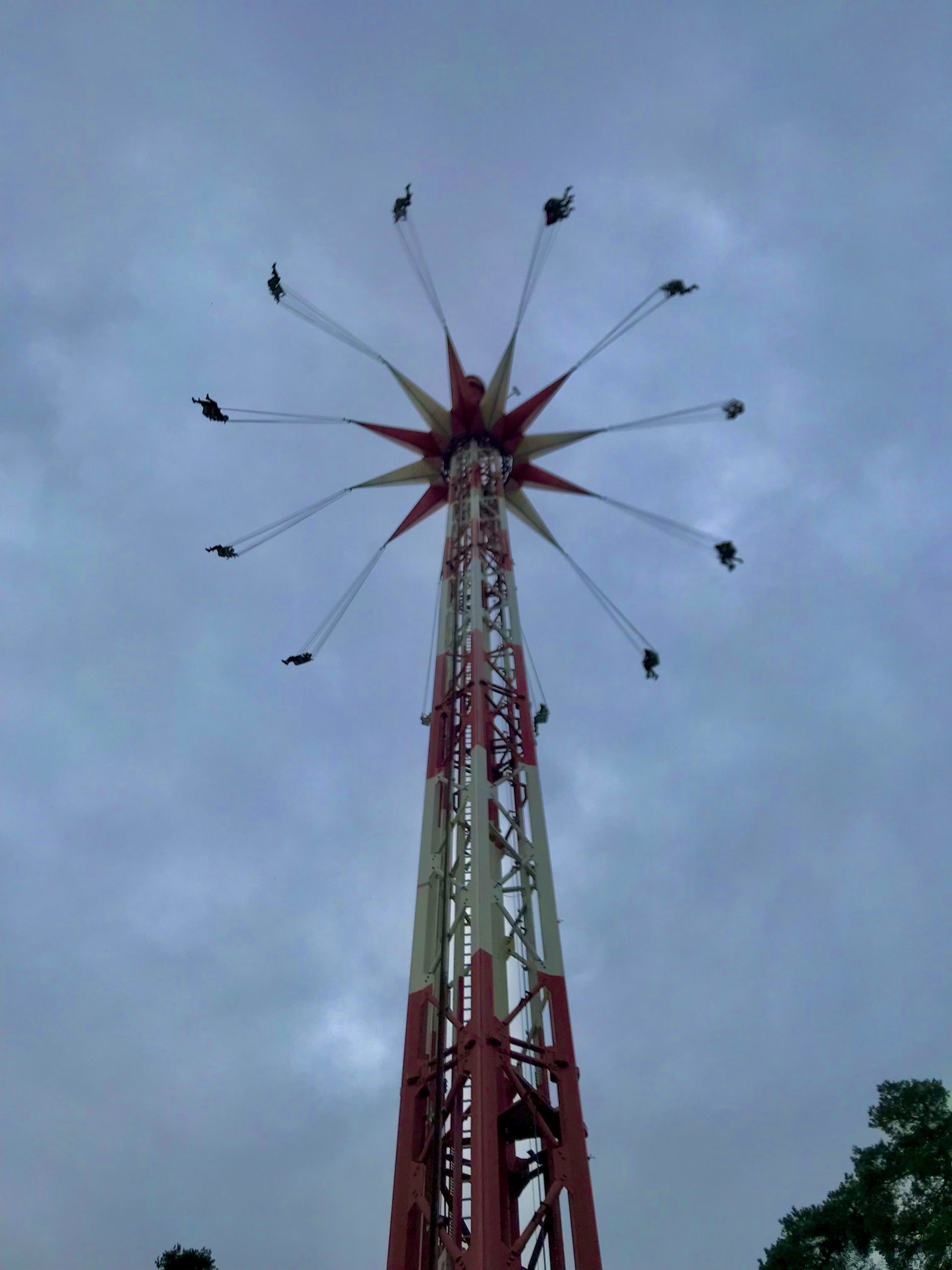 There’s also this really quite bizarre dark ride located in a castle. It features some strange and perhaps some inappropriate scenes, and the storyline doesn’t flow particularly well. It was nice that the park had a dark ride, but it was definitely in need of some attention. 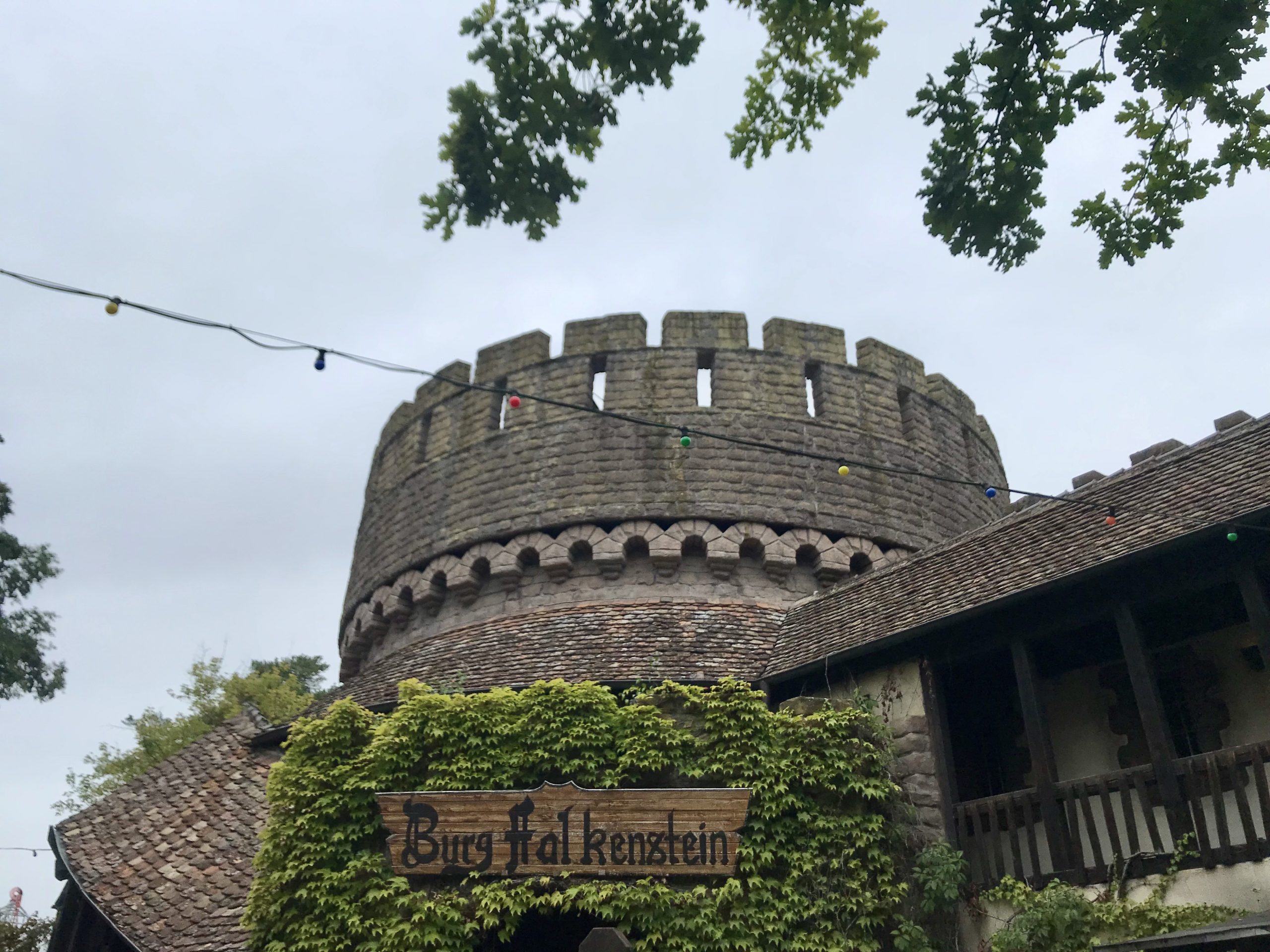 Now what you’ve really been waiting to hear about! The main attraction and draw for many enthusiasts to this park; Expedition GeForce! They even have a t-shirt in the gift shop for enthusiasts who came solely to the park for this coaster! Safe to say, this coaster really lives up to its name. It is surrounded by dense woodland and the atmosphere and scenery of the area make you feel like you are undertaking an important expedition. Once in the station, you pick your seat and once boarded you buckle up your seatbelt and secure your lap bar. You then embark on the 174ft climb up the cable lift hill to the top of the first drop… 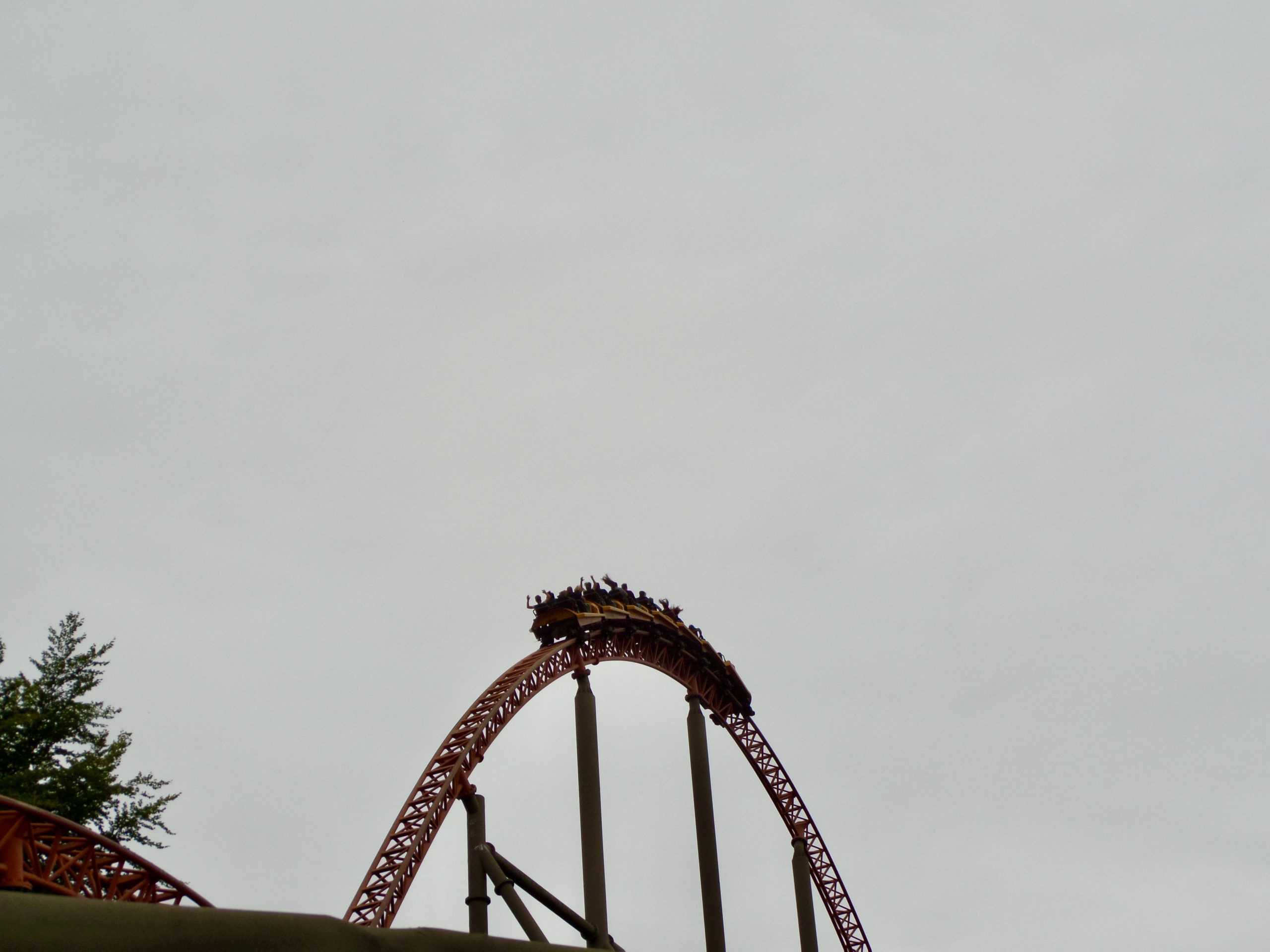 So, does it live up to the hype? In our opinion, yes! It’s a little bit taller and a little bit faster than brother Goliath at Walibi Holland, but a lot more intense! You really get pulled down the first drop and get thrown into a series of airtime hills, twists and turns. Approaching the end of the layout, you get thrown into a series of bunny hops with the most insane ejector airtime and head chopper moments. This is probably some of the most intense ejector airtime you can experience. It is probably comparable to the ejector in the second half of the layout of Untamed at Walibi. It is certainly a world class coaster, but it is down to personal opinion to decide if it is the world’s best coaster. We certainly think it’s worth a trip to the park for this coaster alone! 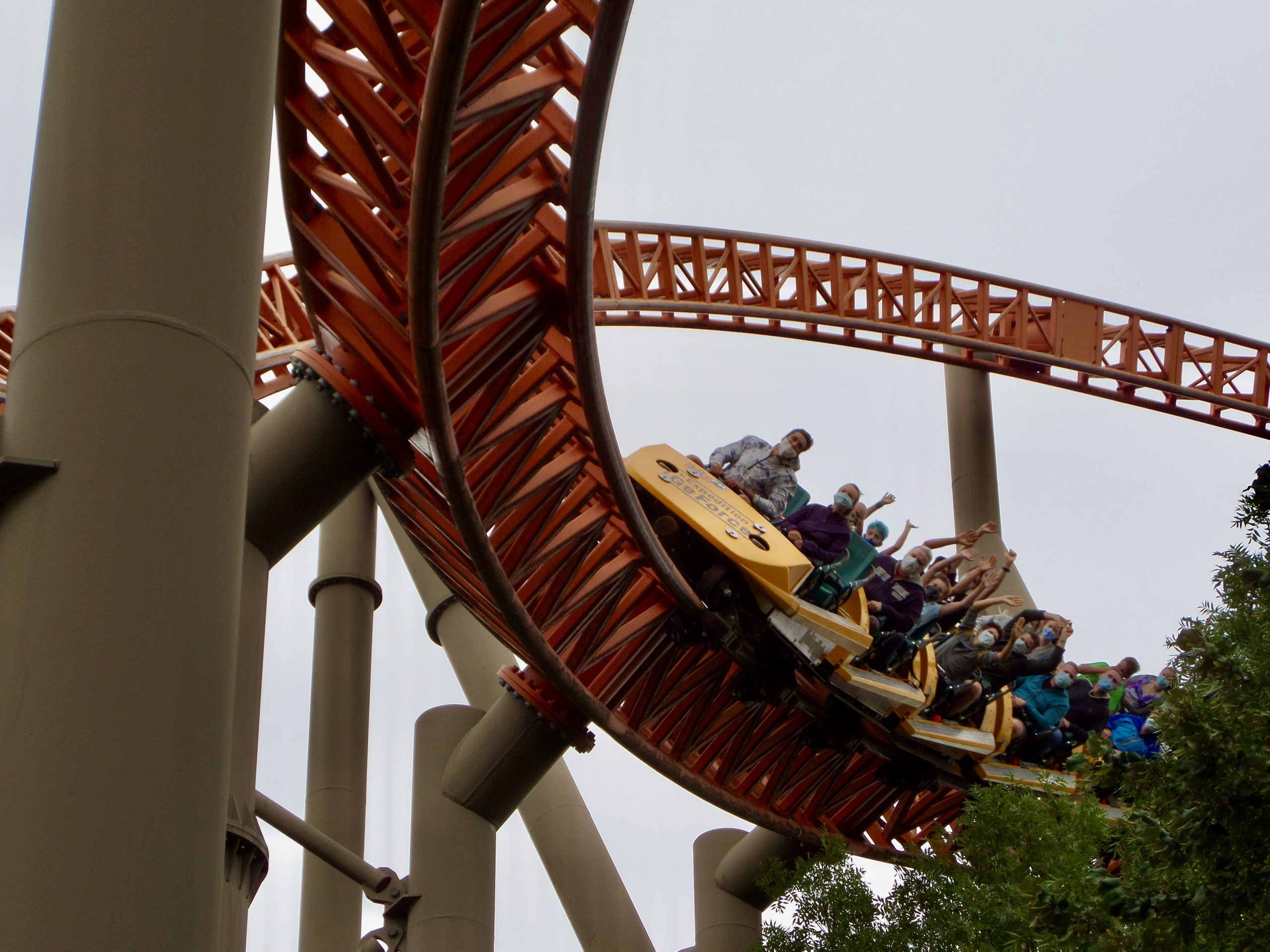 We had a lovely day at Holiday Park. It was a little bit rainy in the morning, but by the late afternoon the sun was shining. It has a great mix of attractions including flat rides and water rides. The park also has lovely landscaping being in a woodland and surrounding a lake, and there’s plenty of floral arrangements. As we said above, it’s worth a visit to this park alone just for Expedition GeForce– a truly awesome coaster!