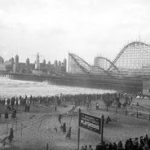 Here at California Coaster Kings, we tend to lean more towards the coverage of the larger amusement and theme parks in our home state, focusing on the here and now of the major players in the amusement industry. For this article however, we’re going to narrow our focus and turn back the clocks as we take a look at the fascinating history of the famous Los Angeles landmark, yet often forgotten destination among enthusiasts, the Santa Monica Pier.

The Santa Monica Municipal Pier opened on September 9th, 1909, after a 16 month construction process. The 1,600 foot long pier was very innovative for the time, as it was the first on the west coast to make use and be of the new technology at the time, concrete. 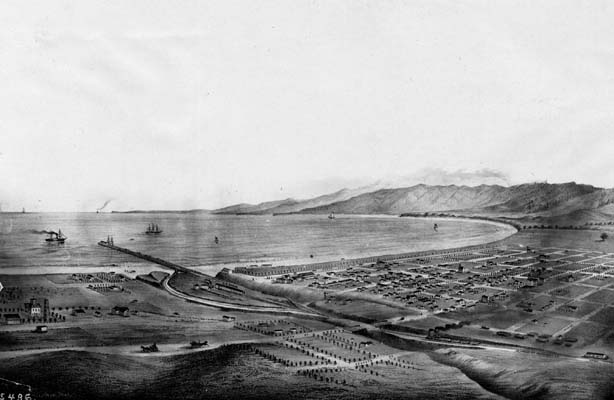 The first iteration of the Santa Monica Pier looked much different than its current much more iconic form. When it opened it 1909, the Pier had no amusement park as you might imagine, but very few people know the real reason the Pier was built. It wasn’t for fishing or boating or anything along those lines. The Santa Monica Pier was initially built to allow sewage from the city to flow through a pipeline under the Pier and be dumped into the ocean away from the beach.  This practice was, fortunately, discontinued in the 1920’s, but the disposing of sewage is the reason the world famous Santa Monica Pier exists. 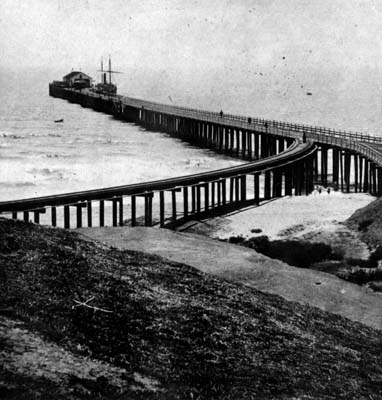 The Santa Monica Municipal Pier very quickly caught as a fishing destination, it was a matter of just a couple of years before carousel carver and amusement industry legend Charles Looff got involved. Locals were advocating the addition of a seaside amusement park to compete with those like Ocean Park and the Venice Piers. Looff helped make this dream a reality for the Santa Monica community by proposing the addition of a second pier on the south side on which the amusement park would be built. The idea was agreed upon and plans moved forward.

On June 12th 1916, The Looff Hippodrome opened, giving locals a chance to ride the brand new carousel, the very first ride on Looff Pleasure Pier. The attraction has since become Santa Monica’s first National Historic Landmark. The success of the carousel meant more the debut of more attractions in the coming months including a fun house, a Bowling and Billiards room, The Whip, and the Blue Streak Racer roller coaster. 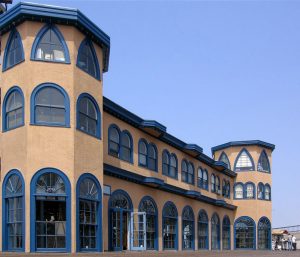 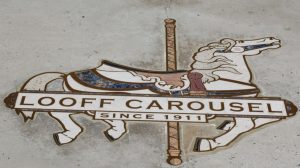 Blue Streak Racer was a wooden roller coaster that opened on March 4th 1917 after being relocated from the defunct Wonderland Amusement Park in San Diego. Standing at a height of 60 ft, and featuring a rather impressive track length of 3,600 feet, the Charles Page designed Blue Streak Racer was quite a thrill for the time. You see the approximate layout in the image below, as it followed the a small double out and back route, with one large hill in the middle. After six years of operation, the ride was demolished in 1923.

The loss of Blue Streak Racer coincided with a change of ownership. After the passing of Charles Looff, his son Arthur sold the park to Santa Monica Amusement Company. They were the ones to demolish Blue Streak Racer, upgrading to a larger, faster, and more intense roller coaster. Whirlwind Dipper opened just a year later in 1924. It stood a good bit taller at 80 feet, with a similar length. This was not a racing roller coaster, but rather a Prior and Church design, similar to both the Giant Dipper roller coasters that still operate in California today. It featured a very twisty layout focusing and tight turns, more like Giant Dipper at Belmont Park than its Northern California counterpart. It was a rather expensive project for the time as well, coming in at $75,000. Also added by the new ownership was the ornate La Monica Ballroom, a 15,000 square foot ballroom, the world’s largest. Both La Monica Ballroom and Whirlwind Dipper were closed in 1930 when the Great Depression hit. Most other attractions were either auctioned off or demolished. 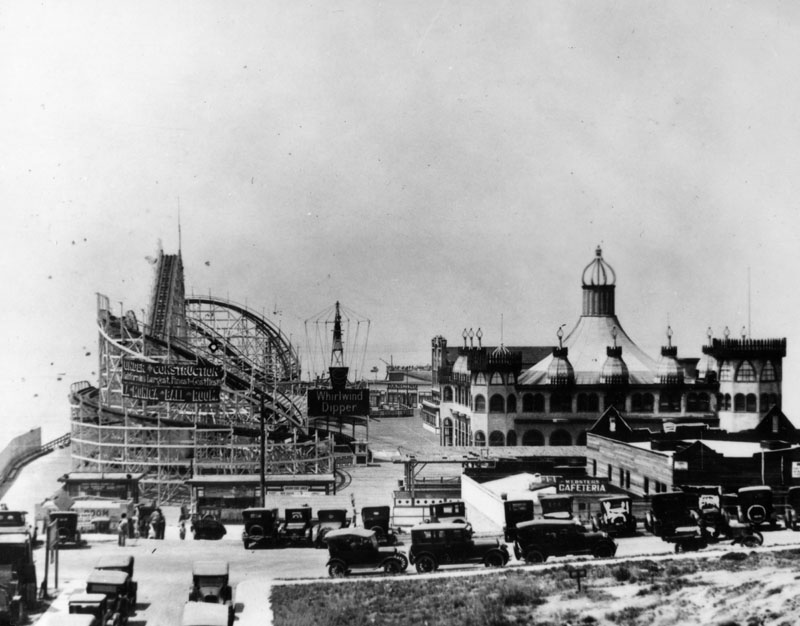 The Pier lay untouched in regards to the amusement park for many years until finally in 1943, Venice banker Walter Newcomb purchased the lease and changed the name to Newcomb Pier. He brought in a 1922 Philadelphia Toboggan Company carousel to replace the aging Looff attraction in 1947. He died a year later leaving his wife to operate the park for the next couple of decades. The carousel was the only attraction to operate during this period of time. 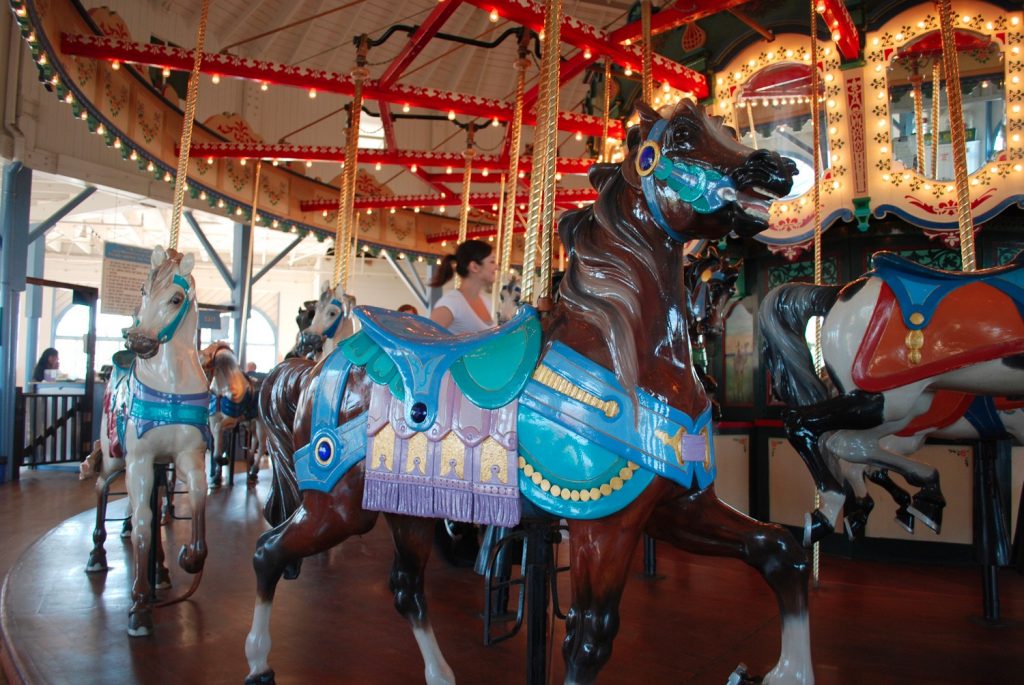 (Current state of the Carousel thanks to Carouselhistroy.com)

In 1983, a winter storm severely damaged the Pier, destroying about one third of the entire structure. This however prompted the community to kick-start a restoration process to return the pier to its former glory this process. This of course included a fully operational amusement park, the first since the 1930’s. Pacific Park opened in 1996 along with the Morgan Family roller coaster, West Coaster. Other attractions at Pacific Park include a Chance swinging ship called Sea Dragon, Inkie’s Scrambler, a Mosier Drop Tower named Pacific Plunge, and the world’s first and only solar powered Ferris wheel, Pacific Wheel. 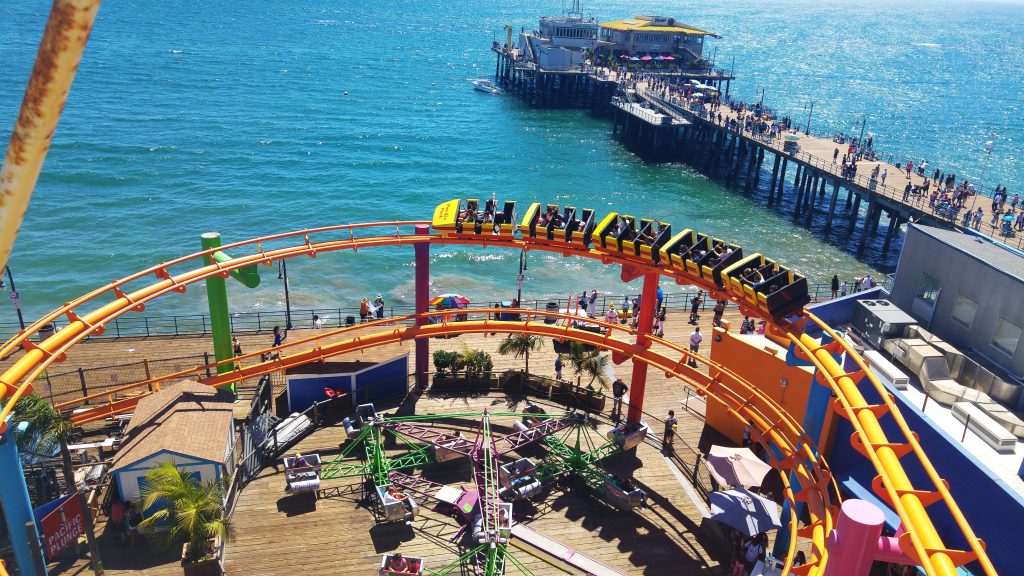 In its century and then some of existence, the Santa Monica Pier has changed immensely, and today Pacific Park in the only admission free seaside amusement park in Los Angeles. Next time you find yourself in Santa Monica, visit the Pier, enjoy it the way it is now, and appreciate this historic yet too often forgotten piece of the amusement world.

Thank you for reading, make sure to check out our recent posts like Raphael’s out of state adventures here, and our Knott’s Merry Farm post here. Leave a comment below, and take care.