Yannick: Switzerland is definitely a unique country : it mixes up different cultures, has four official languages and a unique political system with elements of direct democracy. Same are the theme parks, which are all weird ones. The best known of them is Connyland, which is a weird mess of rides, and it’s only coaster, Cobra, is not less unique.

– Over the years, many of our images have popped up on other sites and forums, awesome that our coverage spreads, not so awesome that not everyone mentioned where they got the images from. We are totally fine with our audience using our images, BUT ONLY IF credit is given to thecoasterkings.com. Thank you! – 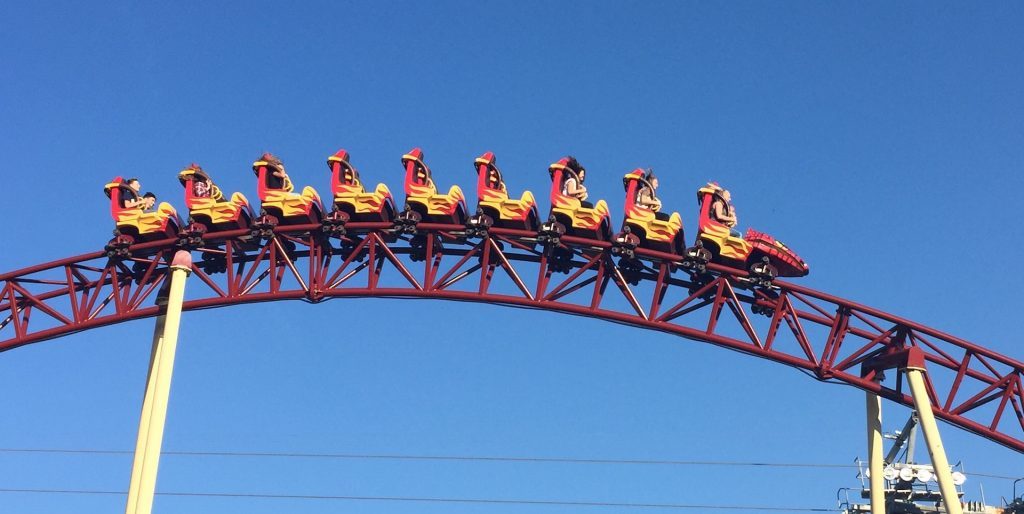 In the beginning of the century, Connyland was becoming bigger and the amount of visitors was growing each year. More and more rides were added, but the demand for a coaster became bigger. Also, with new laws coming in the country and animal protection groups criticizing the way the dolphins where hold in the Park, the future of the Dolphin show, one of the main attractions of the park was uncertain. 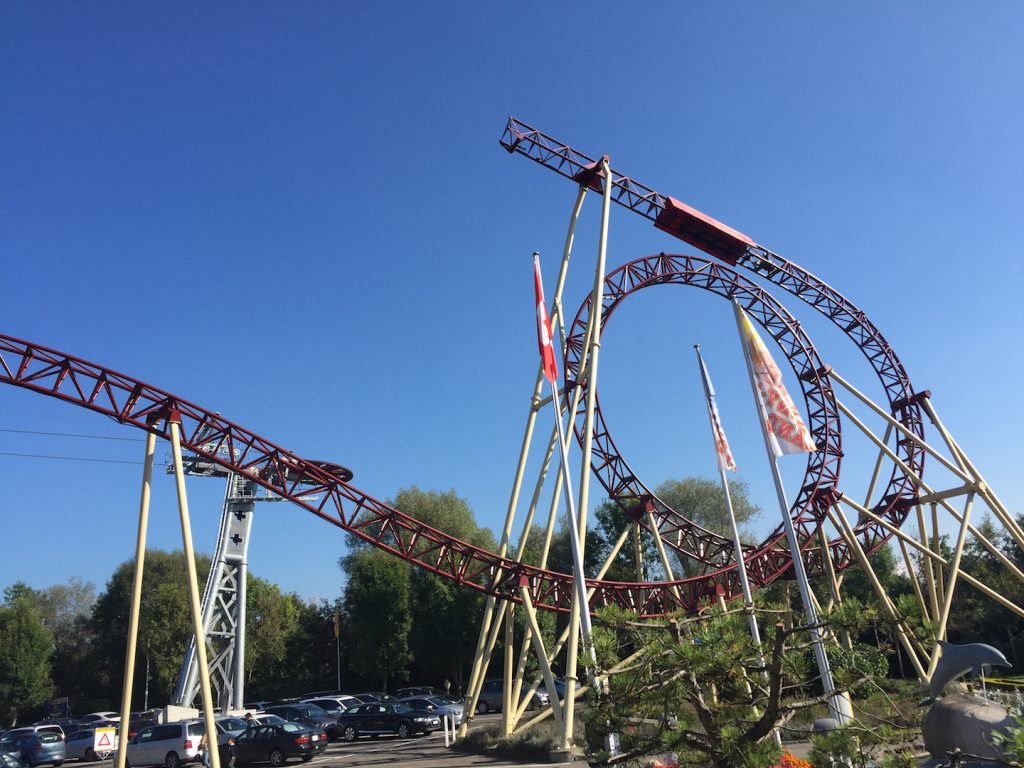 The addition of a coaster seems logical, but with two major challenges. First of all the money, even if Connyland was (and is still) a growing park, the amount of visitors didn’t made enough money to buy an expensive B&M or Intamin coaster. The second and most difficult challenge was the very few amount of space the park owns, and the coaster had to provide a maximum thrill on a minimum amount of space. And so the choice was made of the russian Pax company, very few people have ever heard of. Nearby some kiddie and family coasters, this company manufactured shuttle coasters with two vertical spikes and a loop, called Cobra. This rides seems quiet common, but for Connyland, the choice was made for a 3 million extended version of those coasters, with some unique elements.

But Cobra had an hard time before opening. Originally scheduled for 2006, the coaster took years of delay because of problems with delivery of the pieces, and at some time it was not certain if Switzerland would ever see his first looping coaster. The ride finally opened 2010, but at the end of the same year, the whole track had to be removed and was replaced by a new, smoother one. The coaster reopened the year after that as Cobra like it is today. And even if this ride doesn’t look special, it truly is a must do. 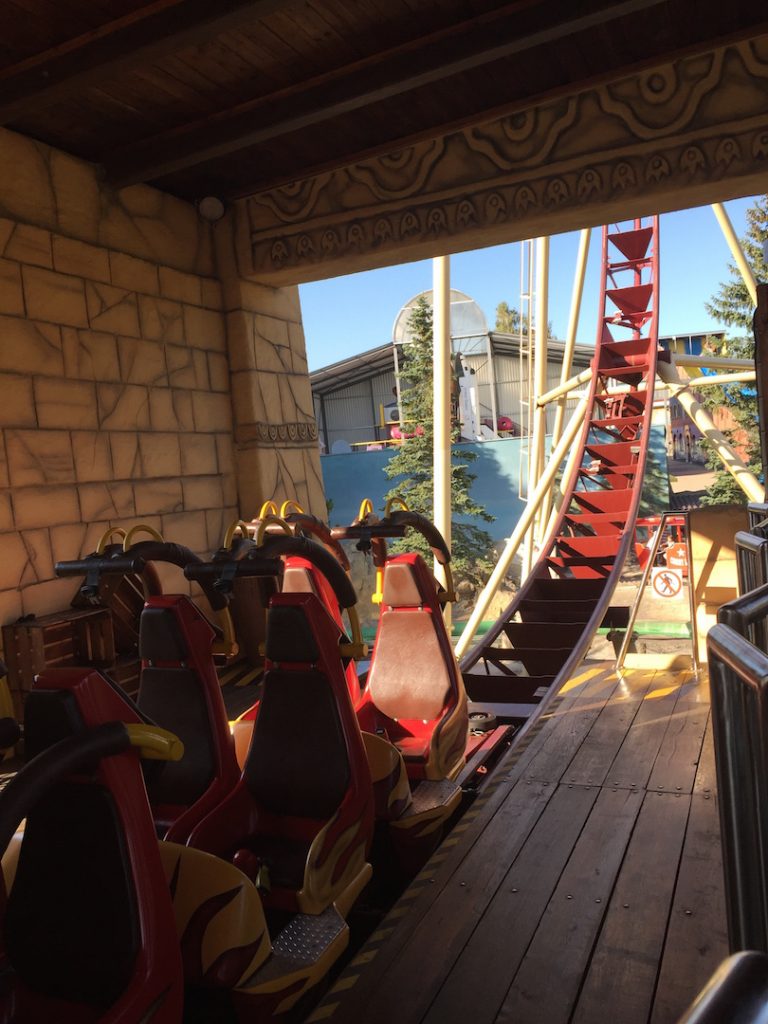 For such a small park and such a small coaster, it is really well themed, the whole station being a Mayan temple. But now to the coaster itself, and the less we can say, it that it really is unique, and a unique and forceful coaster. The ride begins like most shuttle coasters, being tracked backward on a first drop, but this is not a traditional drop like on most shuttle coasters, it is a almost 40 m high more than vertical spike, and that already add a big amount of thrill. 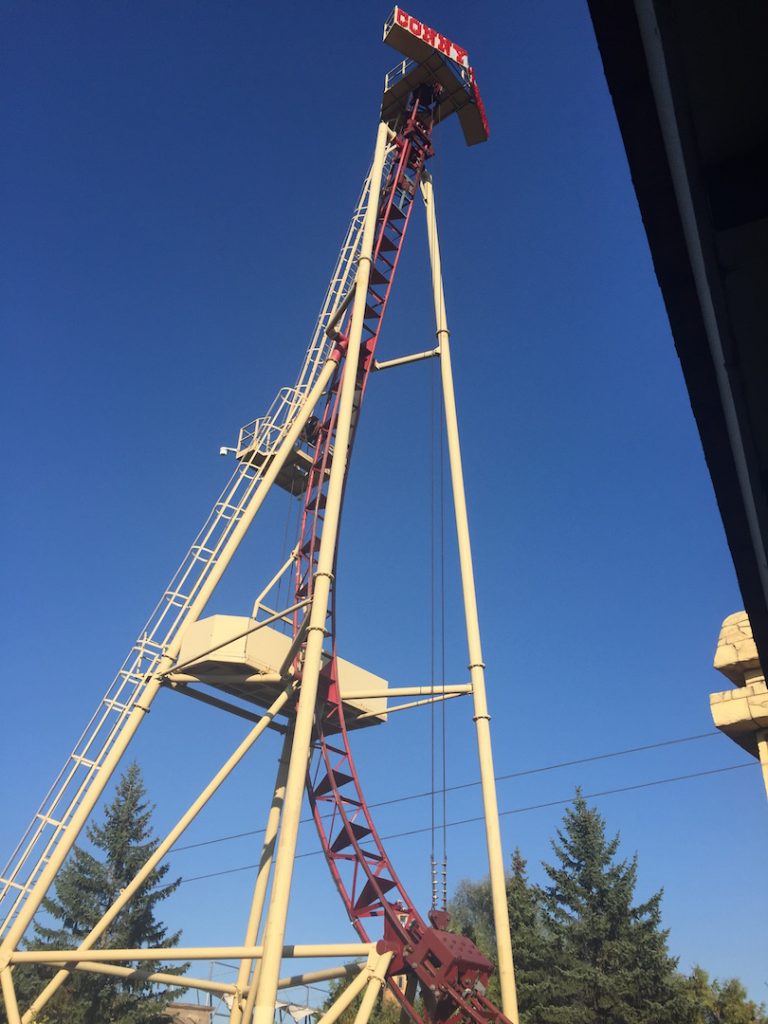 In fact the feeling you get on this, is quiet similar to the feeling on a dive coaster : because the spike is more than vetical, on every row of the train you get the feeling to hang above nothing, and the trains stops a few second on the top before dropping, and the drop is awesome (of course better in the back rows), it is a true vertical drop, with a lot of forces and a great start for the ride. The train then passes the station at full speed before entering two consecutive airtime hills, which in fact provide some really good airtime. After that the train passes an amazing vertical loop. 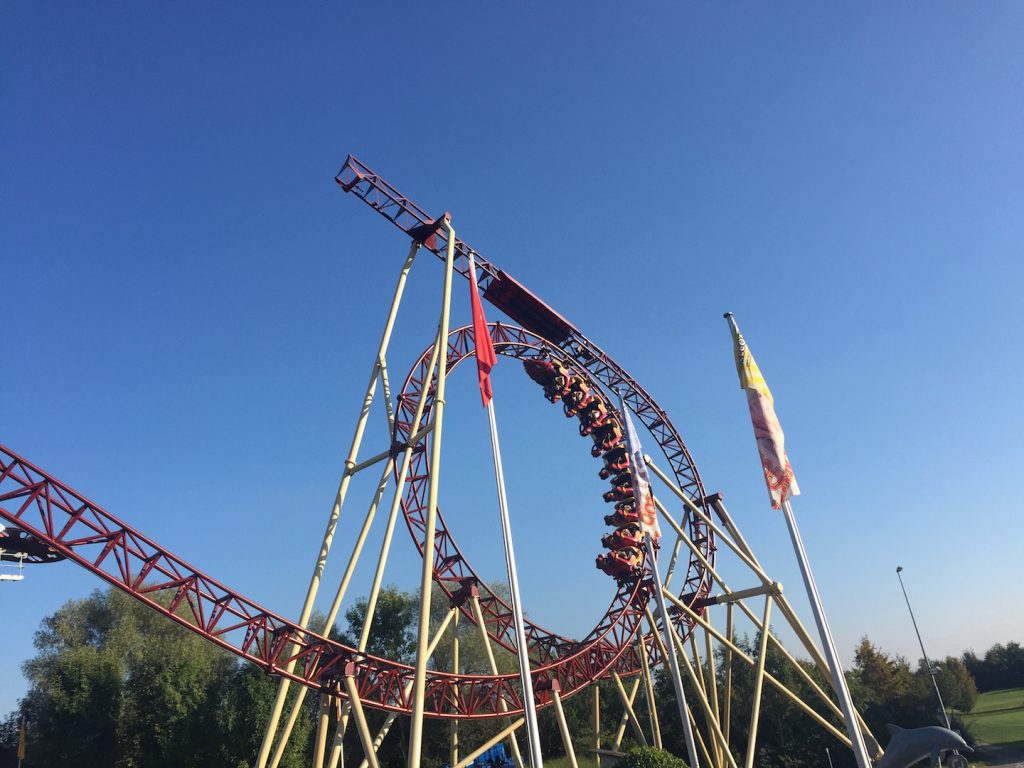 This very small looping , ways more circular than the average loop, is amazingly forceful, and really pushes you in your seat, and you only realize what happened when you hang in the last element of the coaster, an inverted spike over the looping. This elements gives you a lot of hangtime just before the ride goes back backwards back to station (not to talk about the unique esthetic that the coaster gets thanks to that). The backward part is ways less intense, and as the train lost a lot of speed, the airtime hills just provide no airtime anymore, even in the front rows. Definitely a coaster to ride in the Back rows (when the park is not to crowded, it’s usual to see the front rows empty and people queuing only for the last four rows). 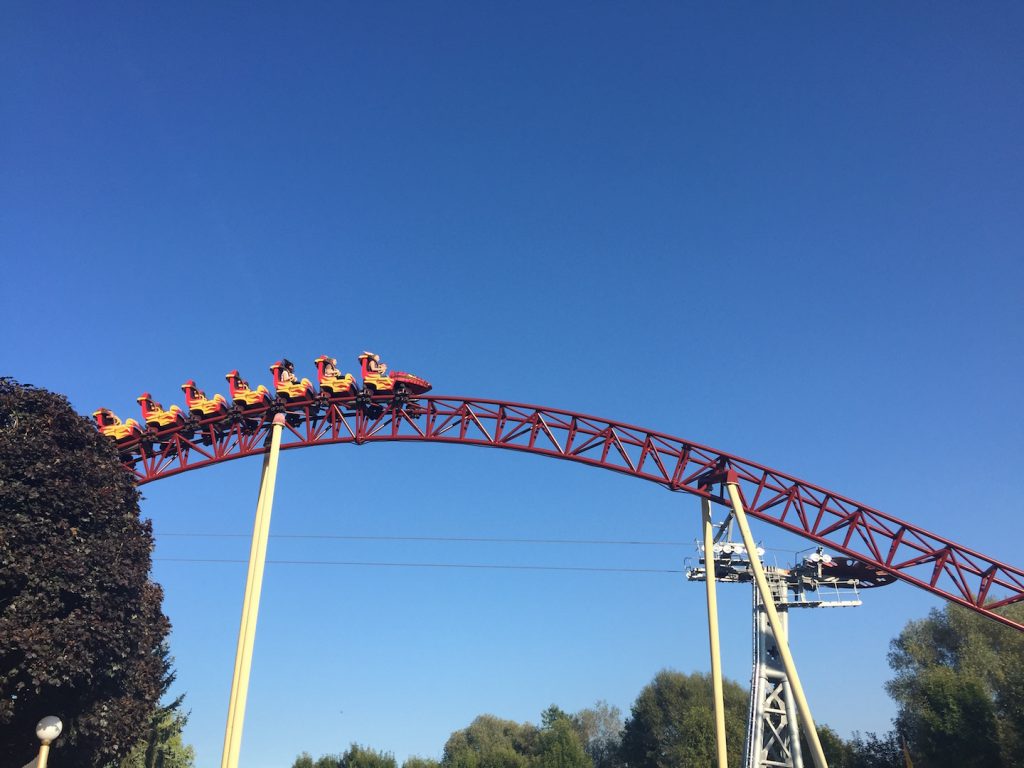 So if you except the backward part of the ride, which is the big negative point of the coaster, Cobra is an amazing forceful rush of adrenaline. It is not really smooth, but not rough neither, but that little shakiness in fact helps the intense experience. This coaster provide unique and strong sensations, on a really small amount of space and a short track length, in fact, the ride feels much longer than it seems, and is a lot of fun. Despite all the technical problems at his beginnings, Cobra comes out as a really good investment, and a solid and intense coaster. Not the most notable coaster out there, but definitely a unique must-do in Switzerland, and a coaster to ride again and again. 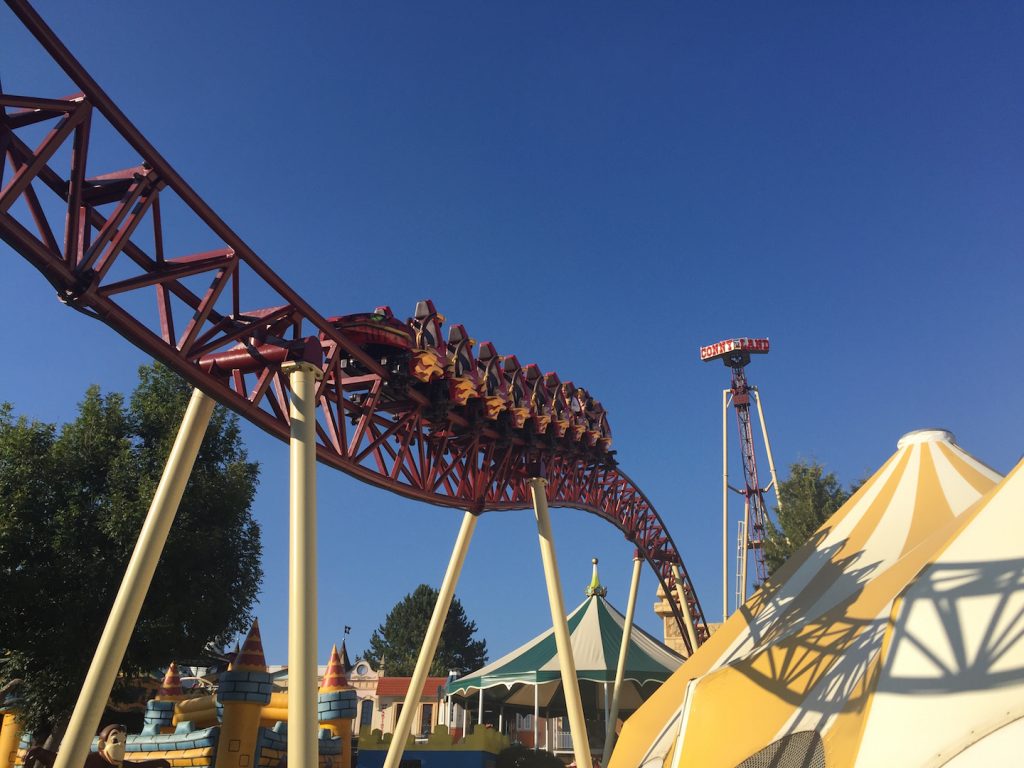 Thank you very much for reading this Cobra review! Please keep in mind, all images found on this site, unless otherwise stated, are owned by Coaster Kings! Sharing them is fine, but only if credit to thecoasterkings.com is given!