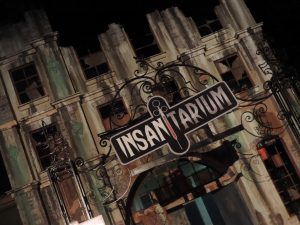 California’s Great America Halloween Haunt has opened for the 2016 Season! They definitely have Northern California’s best mazes (set wise) and have several cool changes in store this year, that greatly improved the preexisting mazes! There’s a shortage of actors again, which is sad as some mazes are very actor-dependent. Nonetheless, the sets usually amaze us at this event! Let’s get into rating and reviewing them!

How we rate and review:

The four ratings exist of a Length Rating, which relates to the length of a maze, the longer the better. This doesn’t necessarily mean physical length of walking through the maze, but may also indicate there are plenty of different scenes and that the maze felt long. The Scare Rating is exactly what you think it is, how ‘scary’ does a maze get, how gruesome it is, if it creates a bunch of jump scares, etc. The Set Rating looks specifically at the job done regarding the theming of the maze, how immersive the sets are, how many different scenes guests encounter, etc. And then last, but definitely not least… the Experience Rating. Which is mainly based off of the overall feel of the maze, was it a extreme? Did it leave you breathless? etc. The overall experience, combined with the other three factors creates a FINAL SCORE for the maze. (Out of 10, 10 being: “absolutely unbelievably amazing”, 1 being: “Don’t even bother visiting”)

Zombie High is without question one of the more popular mazes at Haunt, but is this popularity justified? Zombie High Takes place in a relatively large show building, and features plenty of scenes. Guests will encounter somewhat simple mannequin filled sets as they make they way through the classic looking faux High School. Unfortunately, Zombie High isn’t very scary, because there aren’t a lot of actors doing the scaring. As mentioned, this maze has more mannequins than actual characters, and it definitely detracts from the experience. There are a few good scares hidden in there. Overall, Zombie High is by no stretch a terrible maze, it just feels a little lackluster. Considering the lines it gets, I wouldn’t be too torn up if you have to skip Zombie High, the park has better to offer. 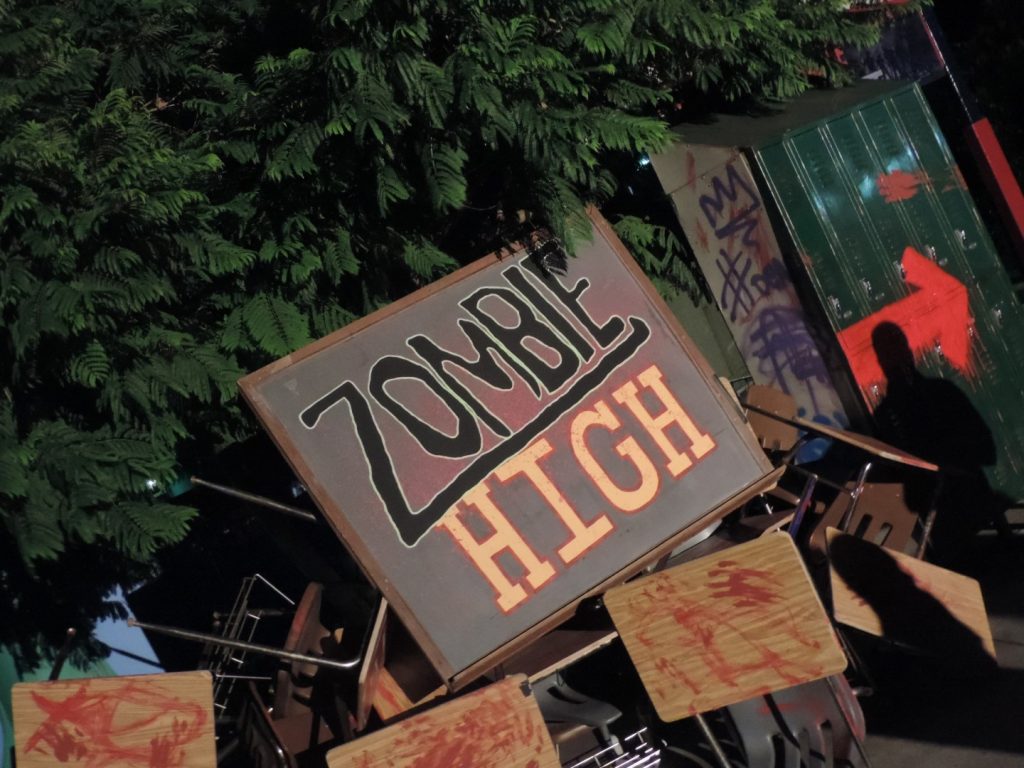 Madame Marie’s Massacre Manor is more or less your classic haunted house. The theme is simple, and the sets and props are done well enough to reflects that. It is well designed to allow a decent variety of scares and give the actors different tools to work with, which creates a more scary maze. 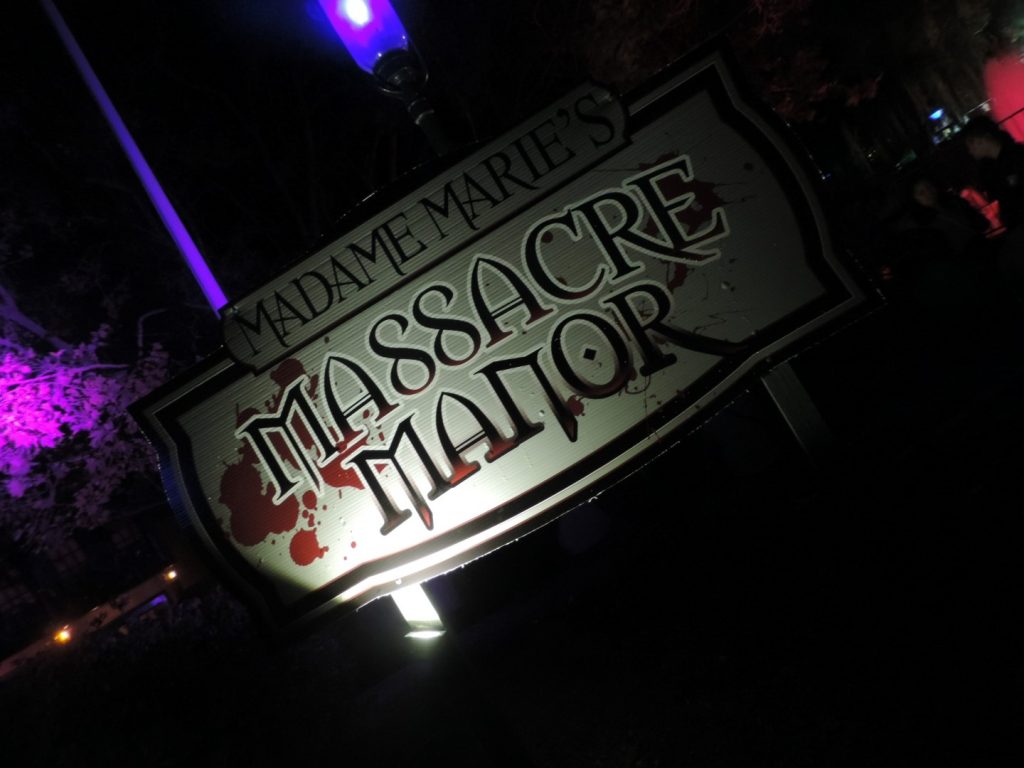 It is just long enough to satisfy guests and keep a decent concentration of excitement throughout. It isn’t exactly the most memorable or unique maze. But it’s done well enough. It’s worth checking out when you’re at Haunt! 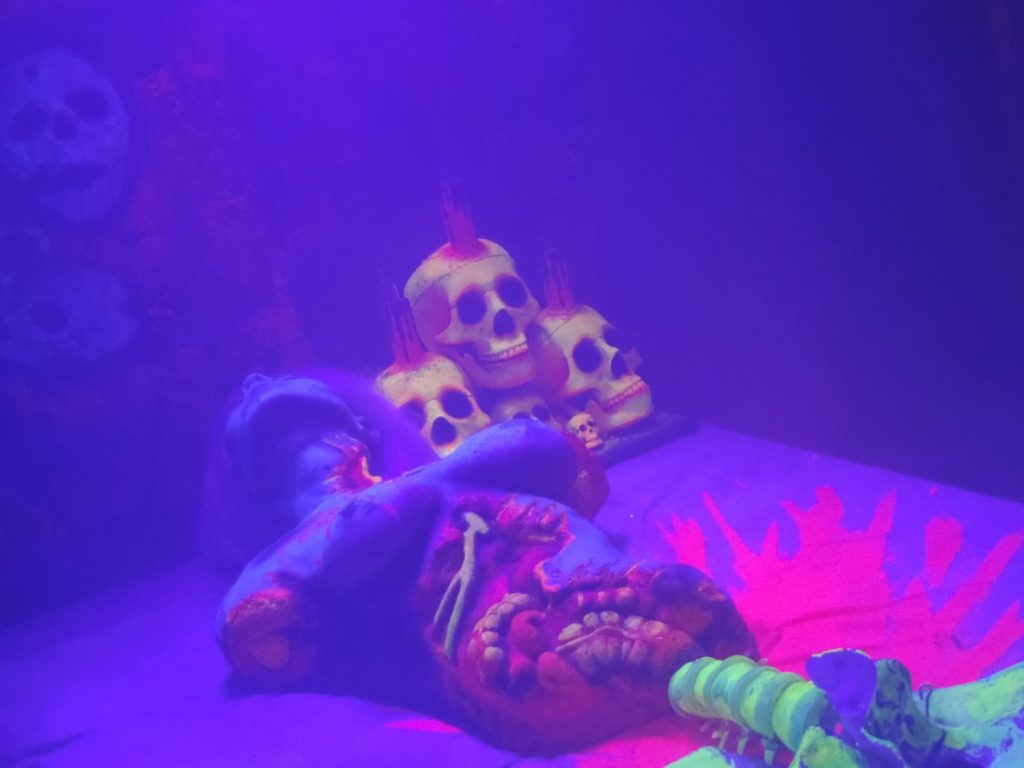 Toy Factory was not one of our favorite mazes last year and was in pretty dire need of an update. Fortunately, an updates is just what it got. This maze has always been and continues to be lengthy, which can be good or bad depending on staffing. Although still not plentiful by any stretch, there were actors sprinkled throughout, and the costume design in this maze is all sorts of funky. The theme is certainly creepy, and the previously okay sets have been expanded upon, including some mirror hallways from the now defunct Mirror Mirror attraction. Toy Factory has certainly benefited from its refurbishment, and it remains a fun crowd pleasing maze. 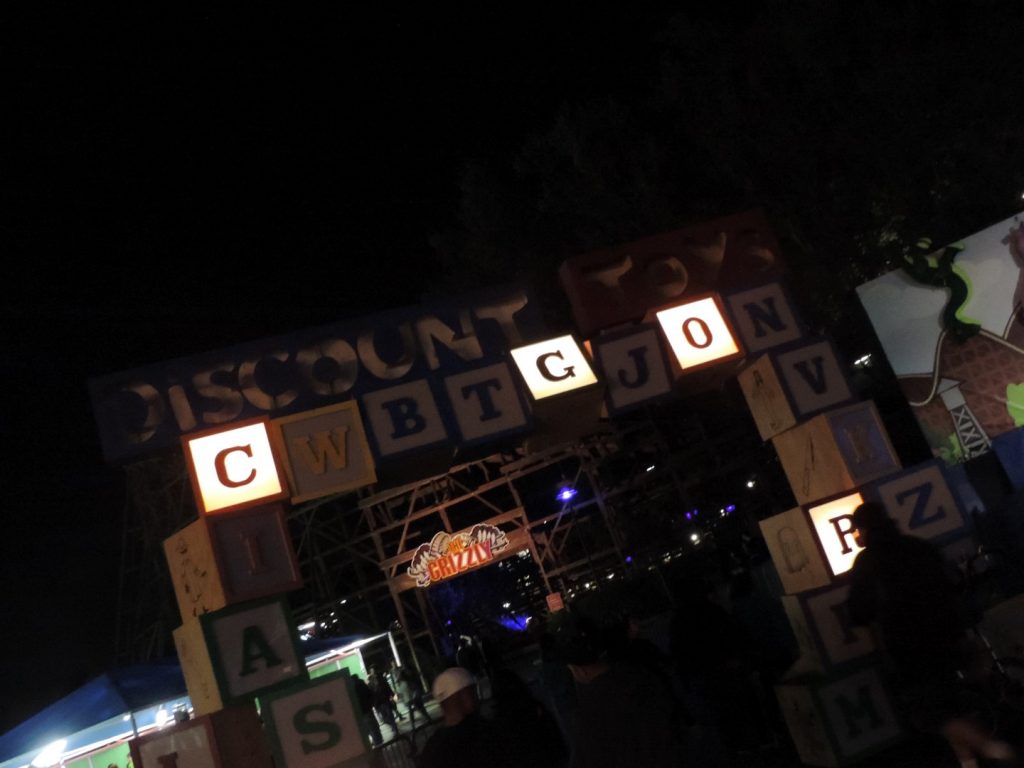 In previous years we have really enjoyed Dia De Los Muertos for its incredible length and beautiful sets. Unfortunately, the recurring theme of understaffing has come into play once again. The length seems hardly justified when there is so little action throughout the maze’s duration. 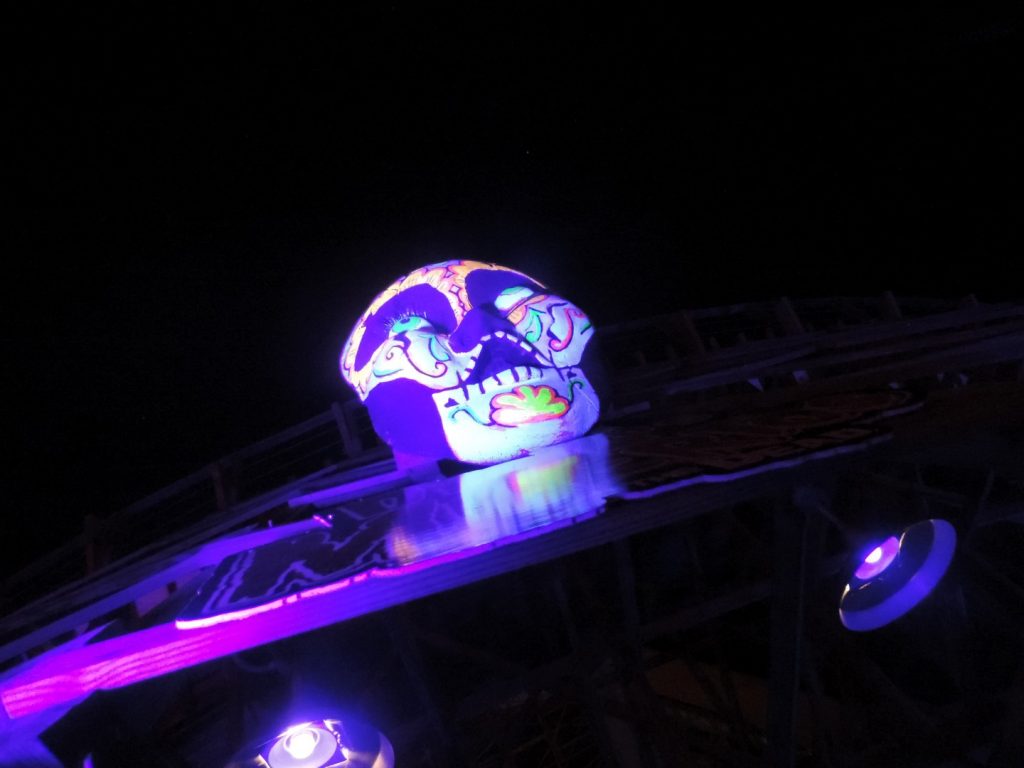 It features indoor and outdoor section of these wonderful looking neon scenes, and the maze seems to just go on and on. There’s just n one to fill them up. It’s definitely a crowd favorite, and it is undeniably pretty, however, it feels less like a maze and more of a casual walk through some neat scenes. It’s still a fun experience, just not the scariest experience. Go in with the idea of enjoying a very cool 3D maze and you will LOVE it! 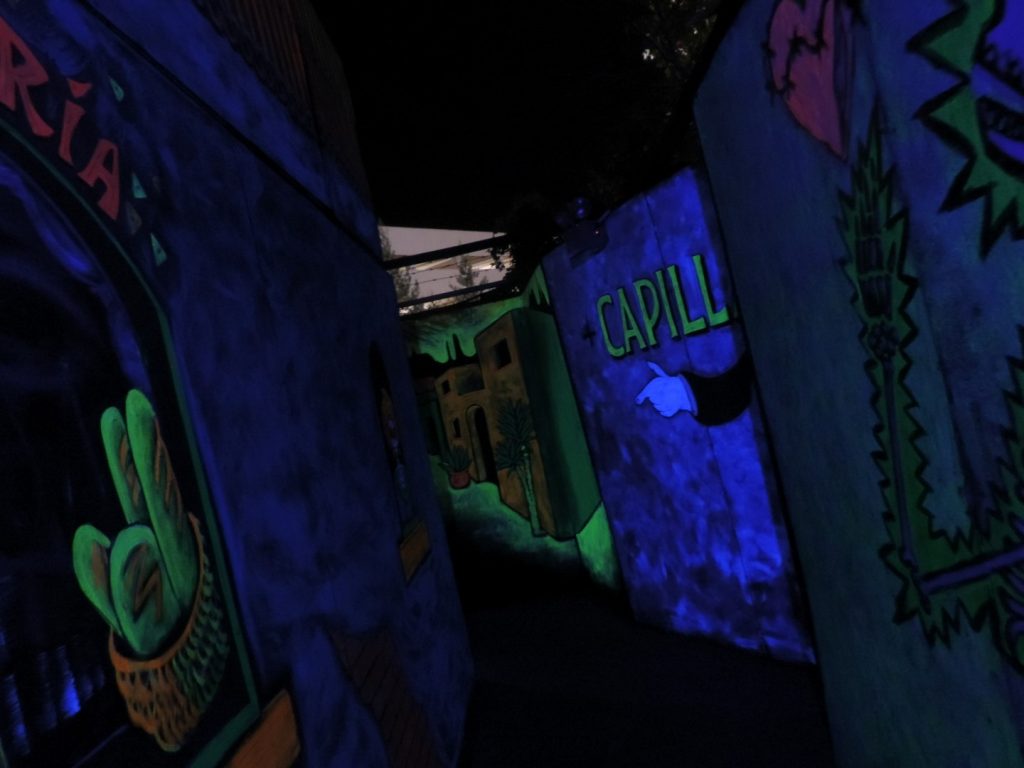 NOTE: Due to recent criticism of Halloween events with Mental Hospital themes, and after FearVR closed at all properties, Insanitarium has been permanently closed as well. We will keep up the review for this maze, since we think the park deserves recognition for this great maze.

Insanitarium was new for last year, themed to a mental institute where of course everything goes awry. Although we enjoyed this maze last year for its solid scares and compact length, it has its flaws also. The scares are still there, and the sets do a good job of giving the abundant actors places to hide. 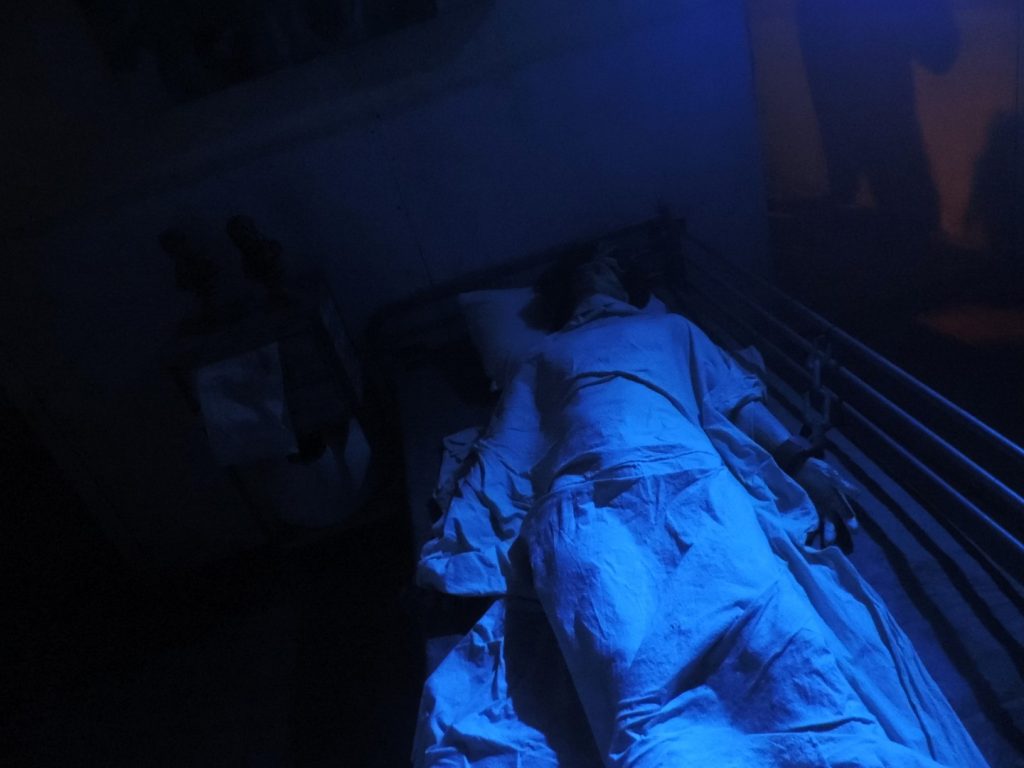 But speaking of sets, this maze repeats itself. (Which is the idea: before-after scenes of an earthquake, sadly guests won’t know the story line well enough). The sets are so redundant and repetitive it gets to the point where you get some major Deja Vus. It really compromises the experience and takes away from the immersion you would hope a maze of this theme would have. (Though the sets are generally awesome). The good length and amount of scares save this maze experience, but it could have been better. Luckily the maze has received a very cool facade this year, which is one of the best at the park! 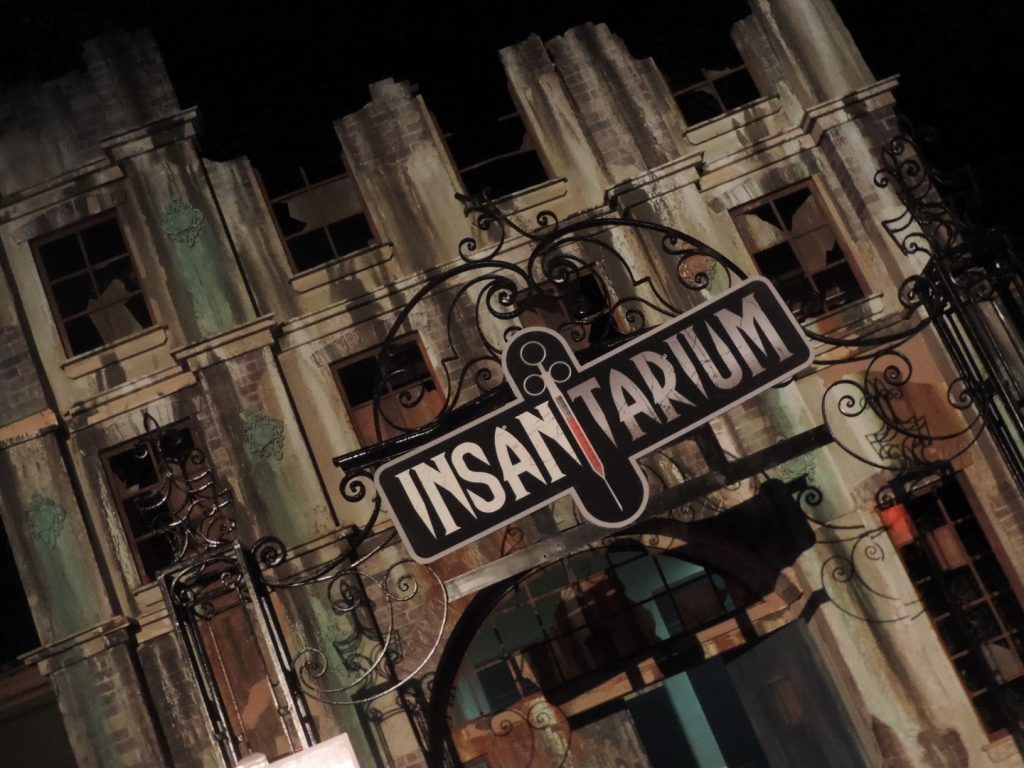 Cornstalkers was pretty heavily refurbished for this year’s Haunt and boy does it show. First off, this maze is long, long to the point where you really start to feel isolated and become immersed in the theme. Speaking of the theme, it doesn’t get more classic or effective than a haunted corn maze. 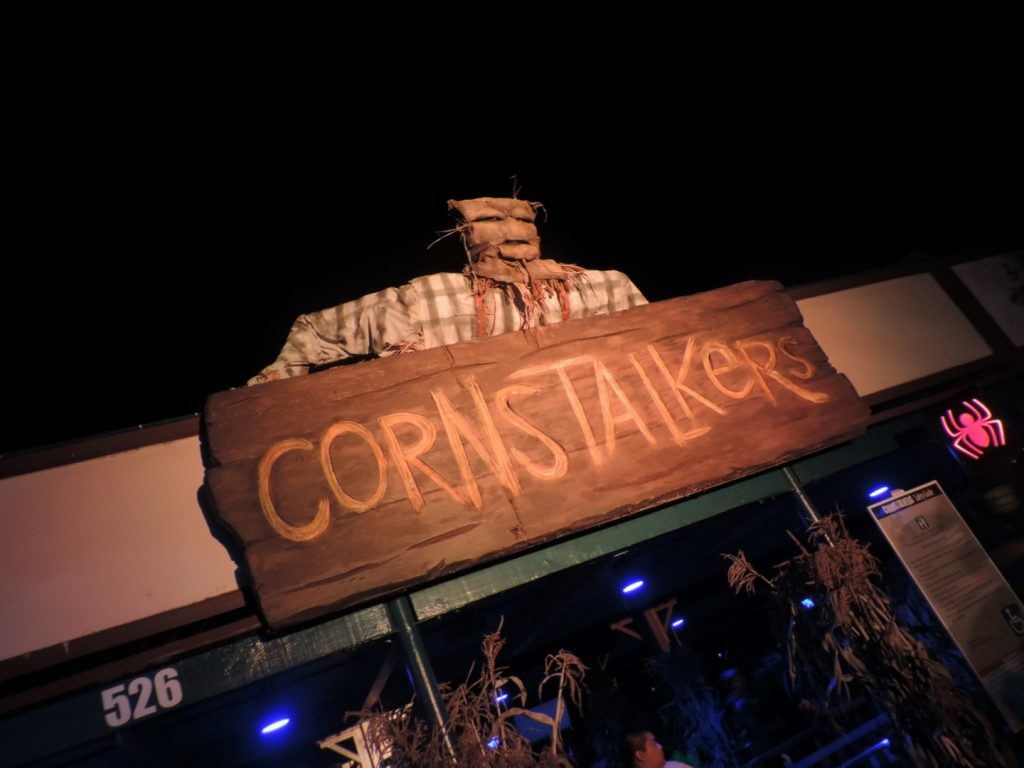 Everything from the look of the sets to the smell of the air makes you feel that much more a part of the experience. Of course it must be addressed that the sets are somewhat minimal, some hay, some corn, and a crashed car or two. Regardless, it fits quite well with the theme, especially with the new scenes and little sheds. Despite the incredible length there still are some good scares throughout, making this action packed monster of a maze a definite win at this year’s Halloween Haunt. 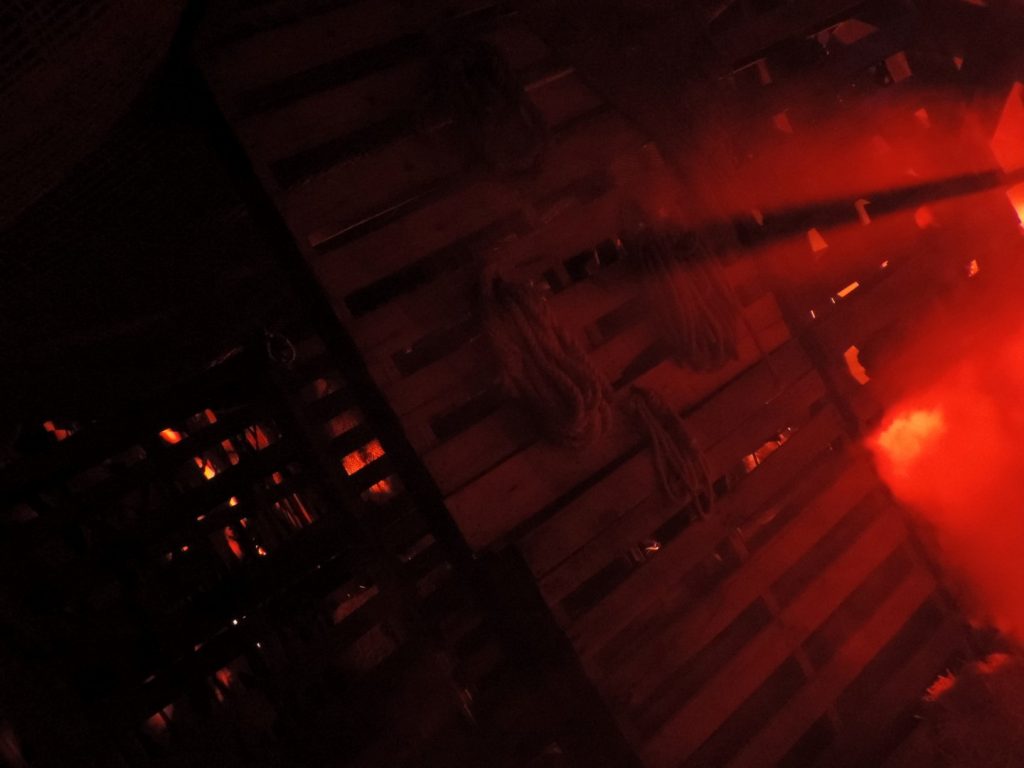 Roadkill Roadhouse is the park’s most gruesome without question. In this roadhouse, you’re the entree. The sets on this maze are pretty neat, and very gross with all sorts of cool effects sprinkled throughout. 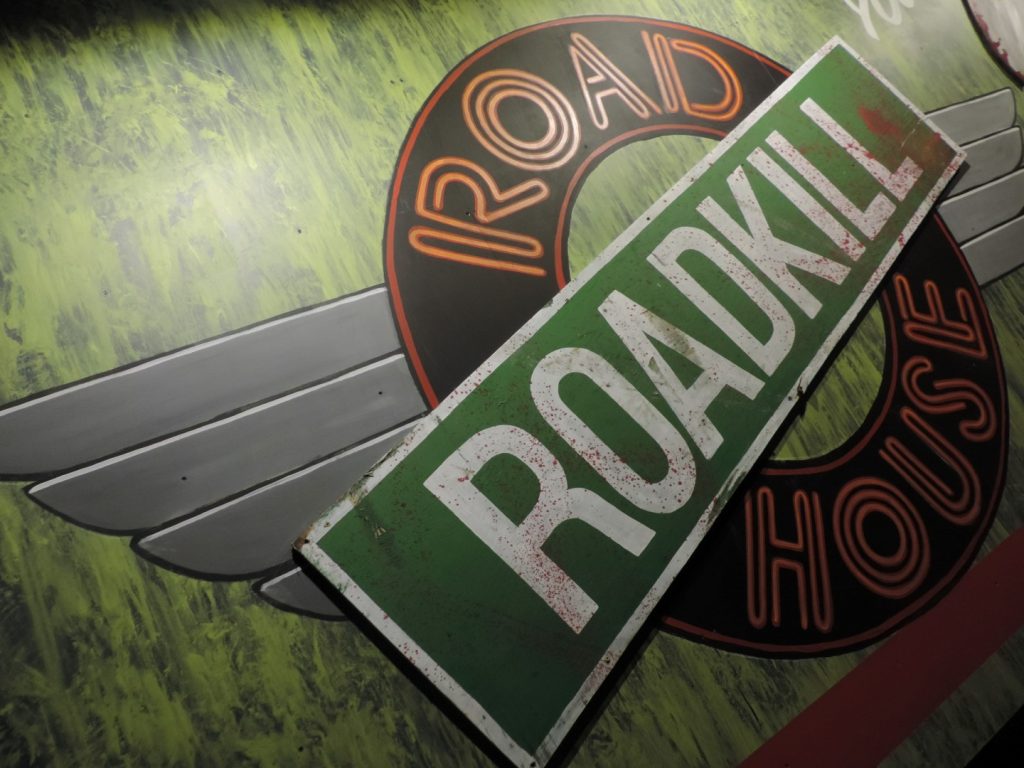 The actors are certainly a plenty as well, and there are lots of scares to go around in contrast to some of the other mazes. It is fairly long, and definitely feels like a complete experience. The only major issue with the maze is that the rooms are very dark. It helps a little with the scare factor, but it more detrimental overall as it gets very hard to see the sets and cool effects in the maze. Regardless, Roadkill Roadhouse is a very good maze, and it should not be missed at Halloween Haunt. 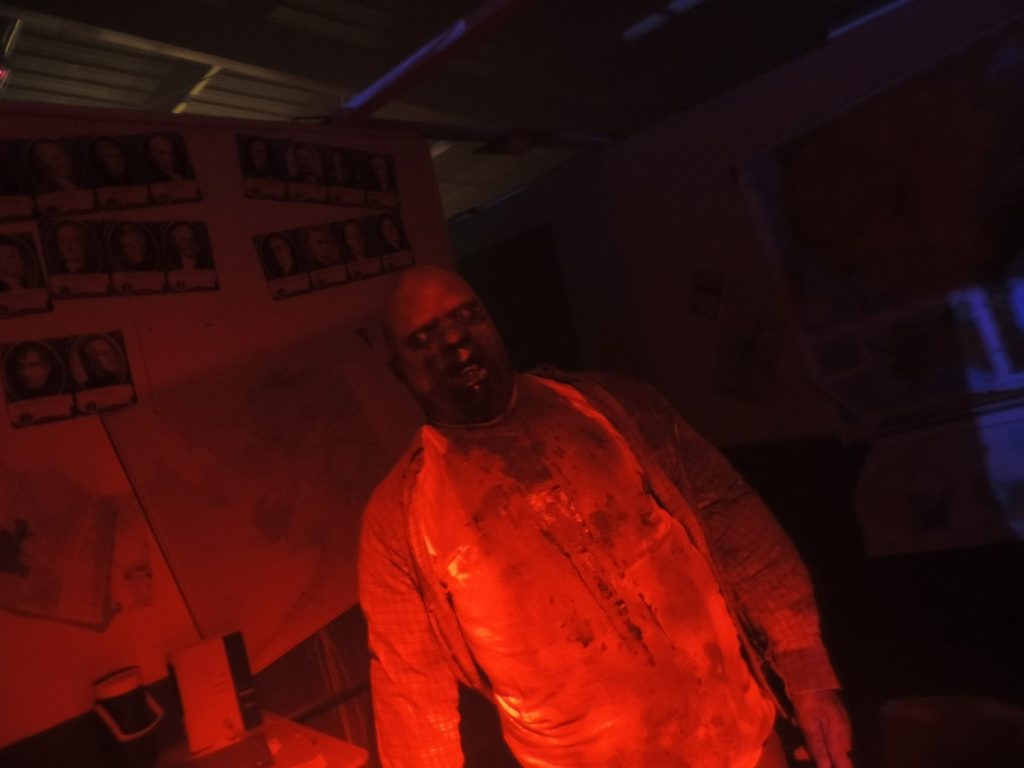 Wax Museum: Chamber of Horrors has always been one of our favorite mazes on premise alone. The idea of a haunted wax museum in which you have to discern which figures are fake and which are not is fantastic. You see all sorts of characters spanning across history from Cleopatra, to Jack the Ripper, to Al Capone. 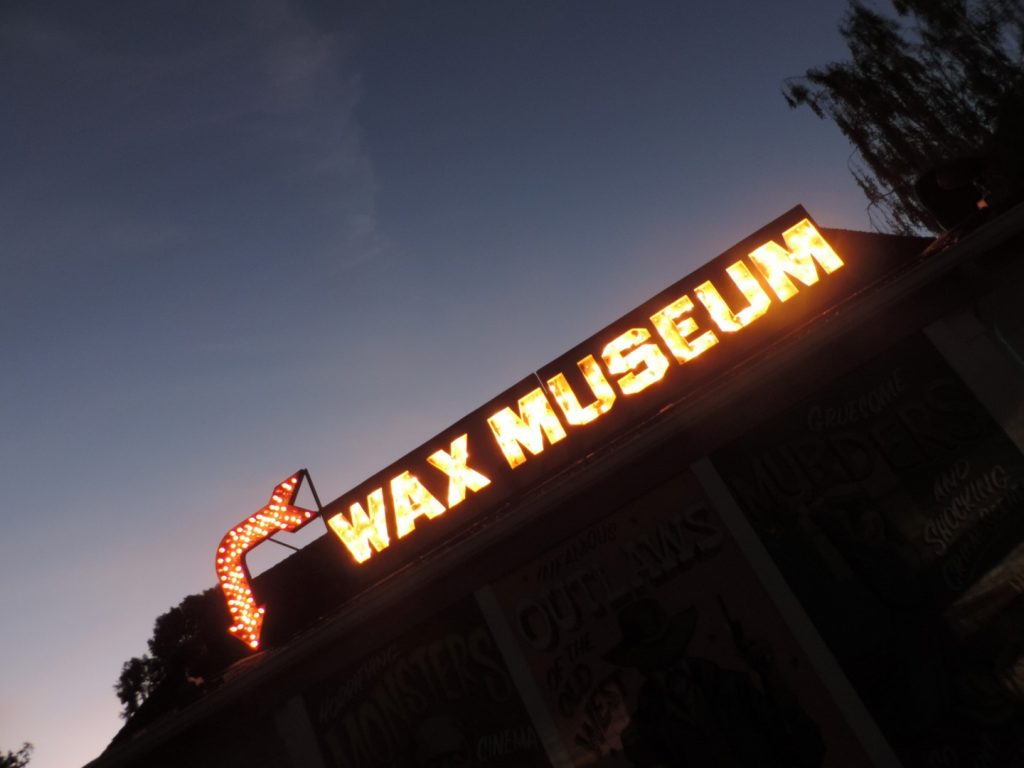 As the maze progresses, the figures become more melted and disfigured, causing a building sense of dread. The sets are very impressive and quite diversified, and towards the end of the maze you even get some animatronics. The maze is also quite long at about three minutes, leaving guests both terrified and satisfied with their experience. It’s still one of our favorite mazes, and it continues to impress year after year. Don’t miss it when you’re out at Haunt. 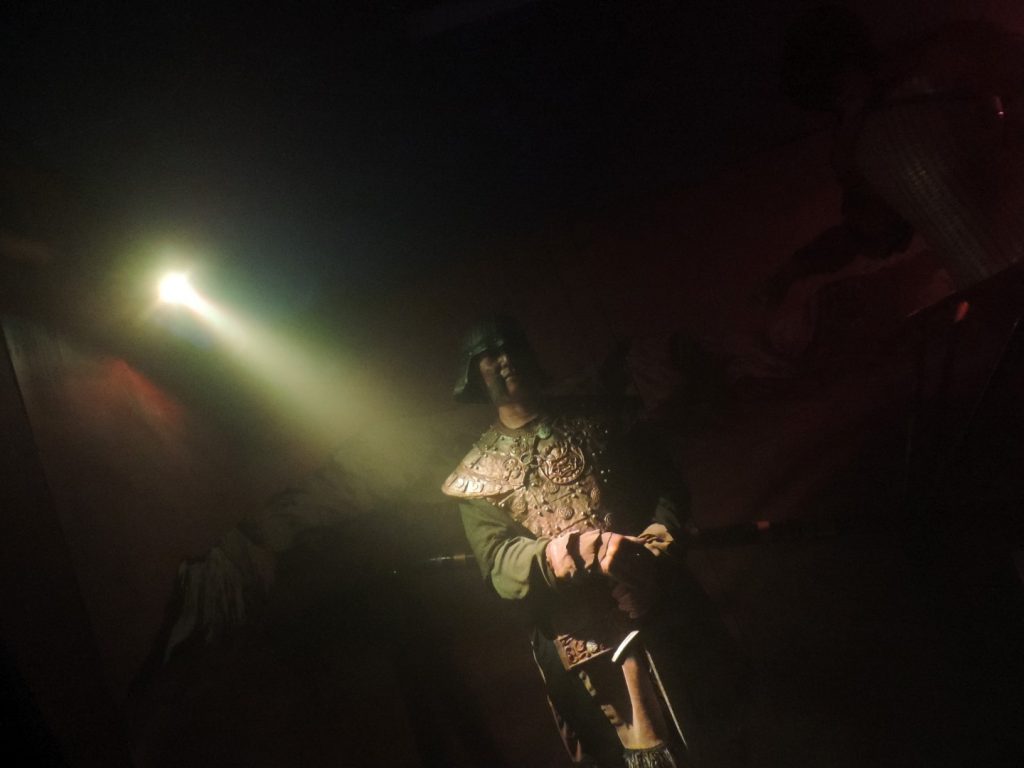 For you Knott’s Scary Farm fans, perhaps you recognize the maze’s new facade? 😉 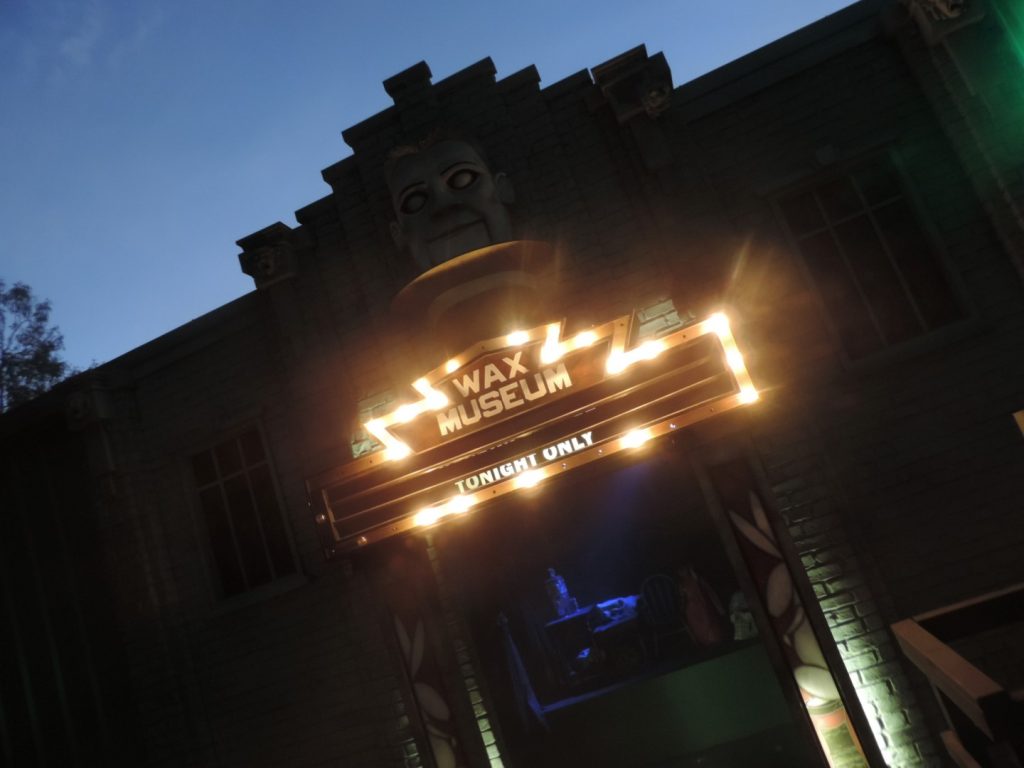 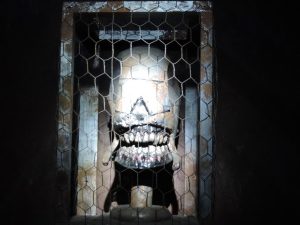 Thanks for checking out these California’s Great America Halloween Haunt 2016 Maze Ratings and Reviews! We’ll be publishing about their Skeleton Key Room experiences (Spoiler Free) and Scare Zones here soon! For now check out the amazing event at their sister park, Knott’s Berry Farm. Check out the Knott’s Scary Farm 2016 – Maze Ratings and Reviews!