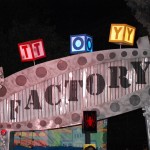 California Coaster Kings attended this year’s California’s Great America Halloween Haunt! Thanks to the Fright Lane and Skeleton Key passes we manage to visit all mazes, all Skeleton Key rooms, and all Scare Zones! This year’s event had 8 mazes. In this particular review article, we’re looking at the 8  mazes the event had this year. Each is rated in 4 categories: Length, Scare, Set, and Experience. Each will also have a quick review!

As a whole this maze was very solid and enjoyable. It takes advantage of the great premise by dividing the maze into different themed sections such as Classic Monsters, the Old West, and some others that we won’t spoil. There are comparatively quite a few actors sprinkled throughout the maze with great costume design and hiding places, enough to provide adequate scares. Given the theme, one could easily imagine the guessing game that guests play as they experience the maze, wondering what figures are wax are which are real. This aspect is what really gives this maze its character. The blend of well-dressed actors, detailed wax figures, and some unsettling animatronics creates for a well immersed, and enjoyable Haunt experience. 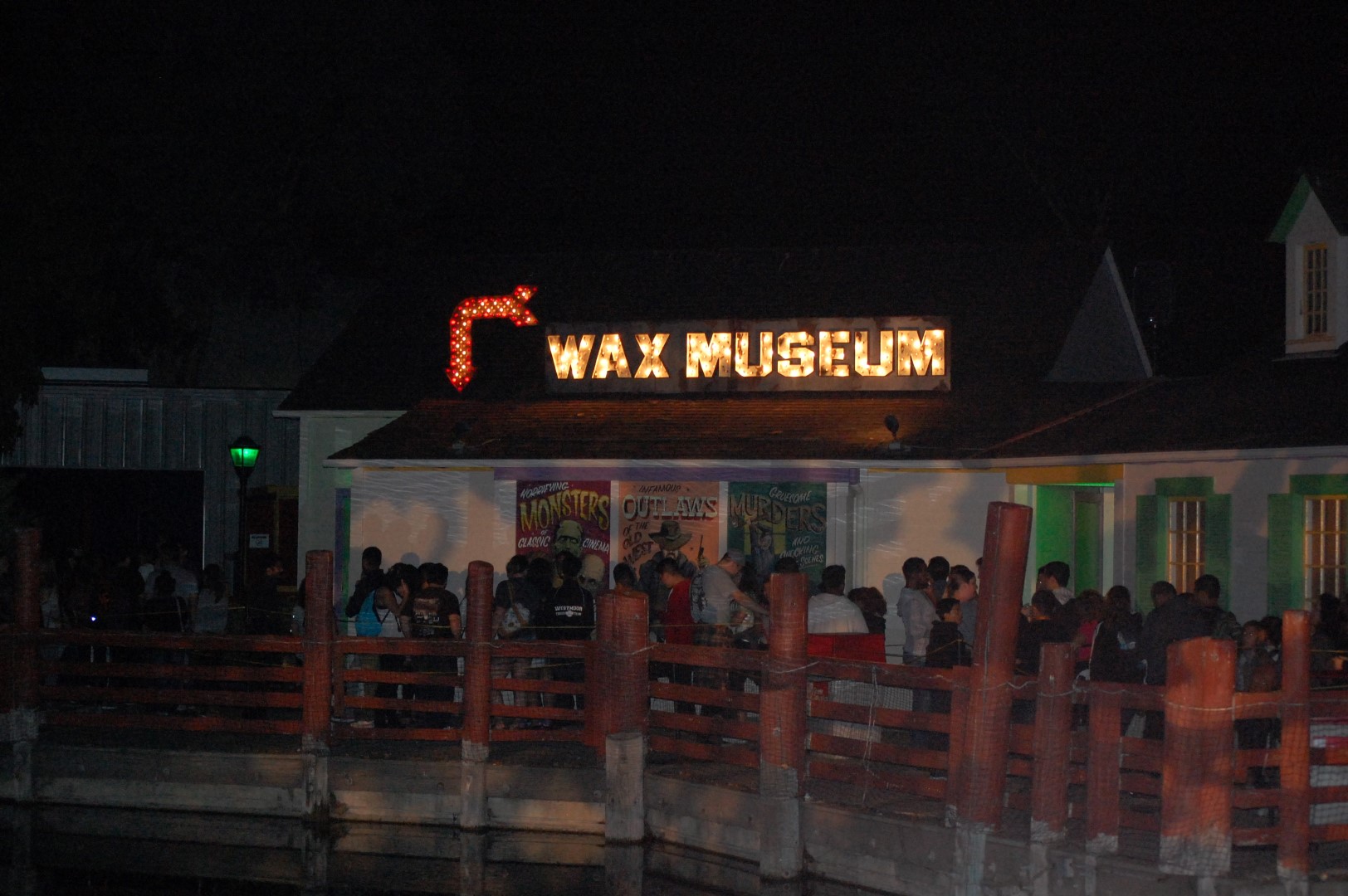 Having undergone a huge improvement since last year, we were very pleased with our experience in Cornstalkers. The real stalks of corn and stacks of hay give the maze a proper sense of reality, especially with the ever so soothing smell. The actors’ costume designs are well camouflaged and provide some great opportunities for jump scares. Where this maze lacks in the set, it makes up for it in length, and the classic corn maze theme really brings this maze together. Whereas last year this maze was essentially deserted with very few actors, this year it was quite the opposite, which added to the experience a lot. Some other mazes that we’ll get to seem to have filled the role of lacking actors however. – Cornstalkers features a Skeleton Key Room. To keep Skeleton Key rooms a surprise, we will not be talking about what happens in the Skeleton Key room. (Skeleton Key Room Rating for this maze: 8.5). 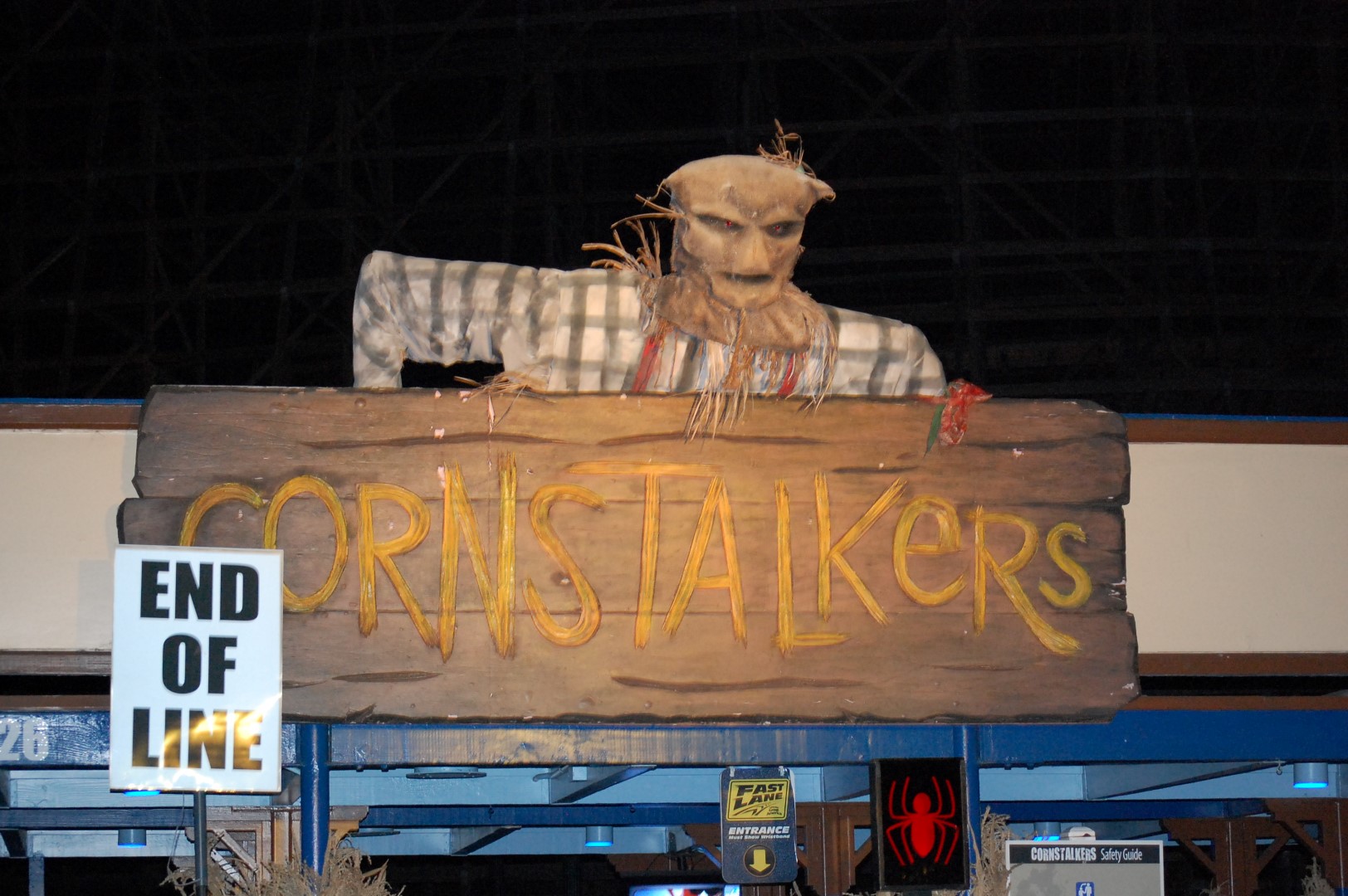 Although this maze is essentially just themed to a haunted house, it pulls it off quite well. First and foremost, there were plenty of talented actors to keep guests on their toes throughout the duration of the experience. The set pieces are all well put together enough, and many of the rooms allow for some pretty creative jump scares. Towards the end of the maze however, there is a strange Dia de los Muertos-esque neon room that feels very out of place. I wouldn’t have said anything about it, but it really does detract from the emersion. Otherwise, this maze fairs well in all departments with some good scares, decent set pieces, and a classic theme that makes for a great Haunt experience. – Madame Marie’s Massacre Manor features a Skeleton Key Room. To keep Skeleton Key rooms a surprise, we will not be talking about what happens in the Skeleton Key room. (Skeleton Key Room Rating for this maze: 7.5) 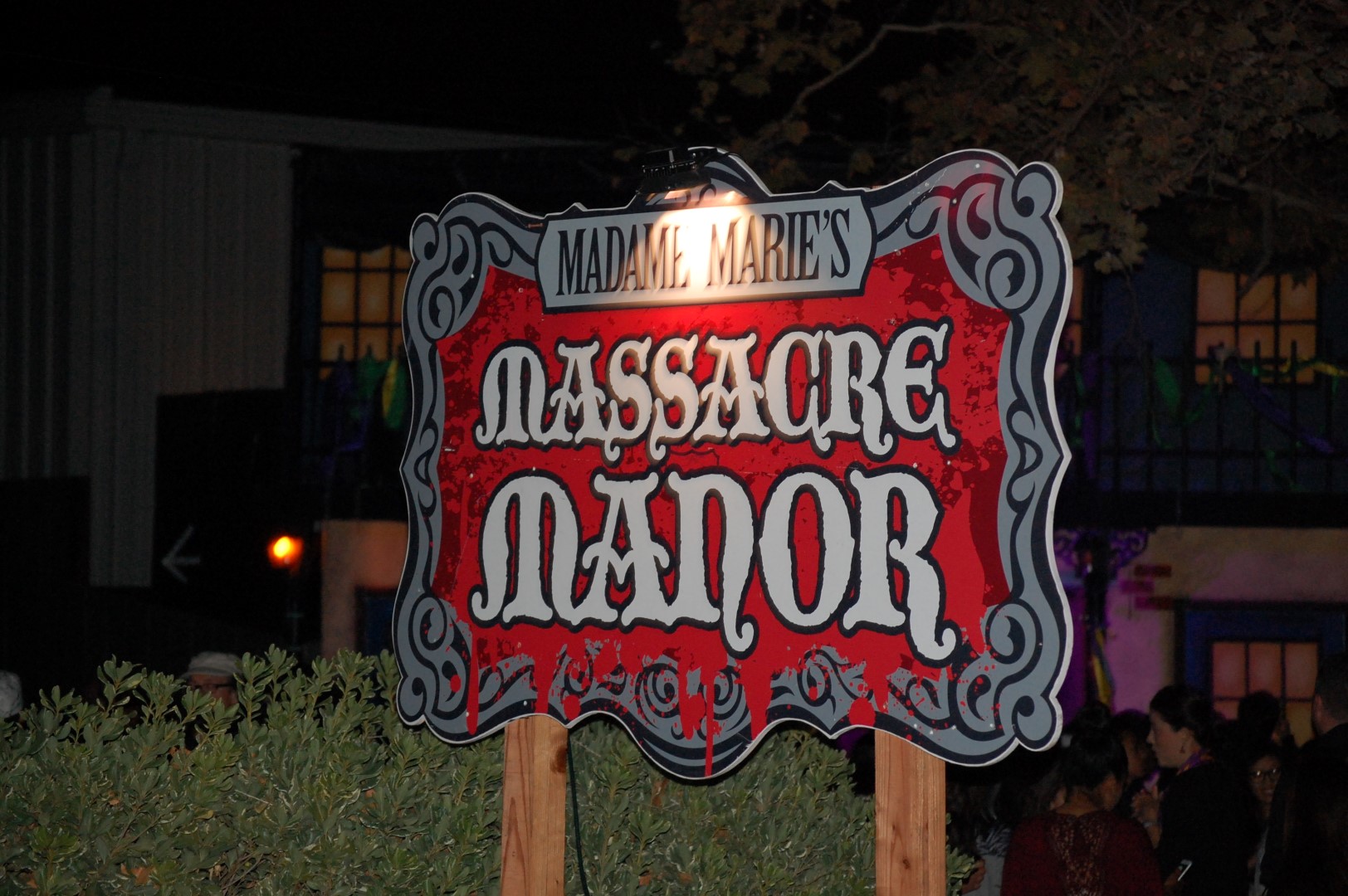 Disgusting, sickening, unsettling, these are all words that could be used to describe Roadkill Roadhouse, but believe me when we say that we mean this in the best possible way. Featuring some truly gruesome sets, costume design… and don’t even get us started on the Skeleton Key Room… everything down to the stench is abhorrent. The actors throughout the maze take proper advantage of their environments using them creatively to get the best possible scares. The actors will also use the constricted space and sharp corners to stalk guests until another actor jumps out from behind a corner for a sweet tag team scare. Its major downfall however is a lack of facade, both inside and out. The outside is simply a tent, and inside the walls are only built about eight feet height which contrasts frustratingly with the high ceiling.There isn’t much else to say aside from reiterating the fact that this maze is hauntingly gross. The length is just enough to keep you grossed out, but not physically sick. A lot of time and effort went into making this maze terrible, and for that we must give respect. – Roadkill Roadhouse features a Skeleton Key Room. To keep Skeleton Key rooms a surprise, we will not be talking about what happens in the Skeleton Key room. (Skeleton Key Room Rating for this maze: 9. This is one of the better Skeleton Key rooms in the history of the event. BE WARNED: This Skeleton Key Room is gruesome to say the least, if you’re easily made sick or disgusted, make sure NOT to volunteer). 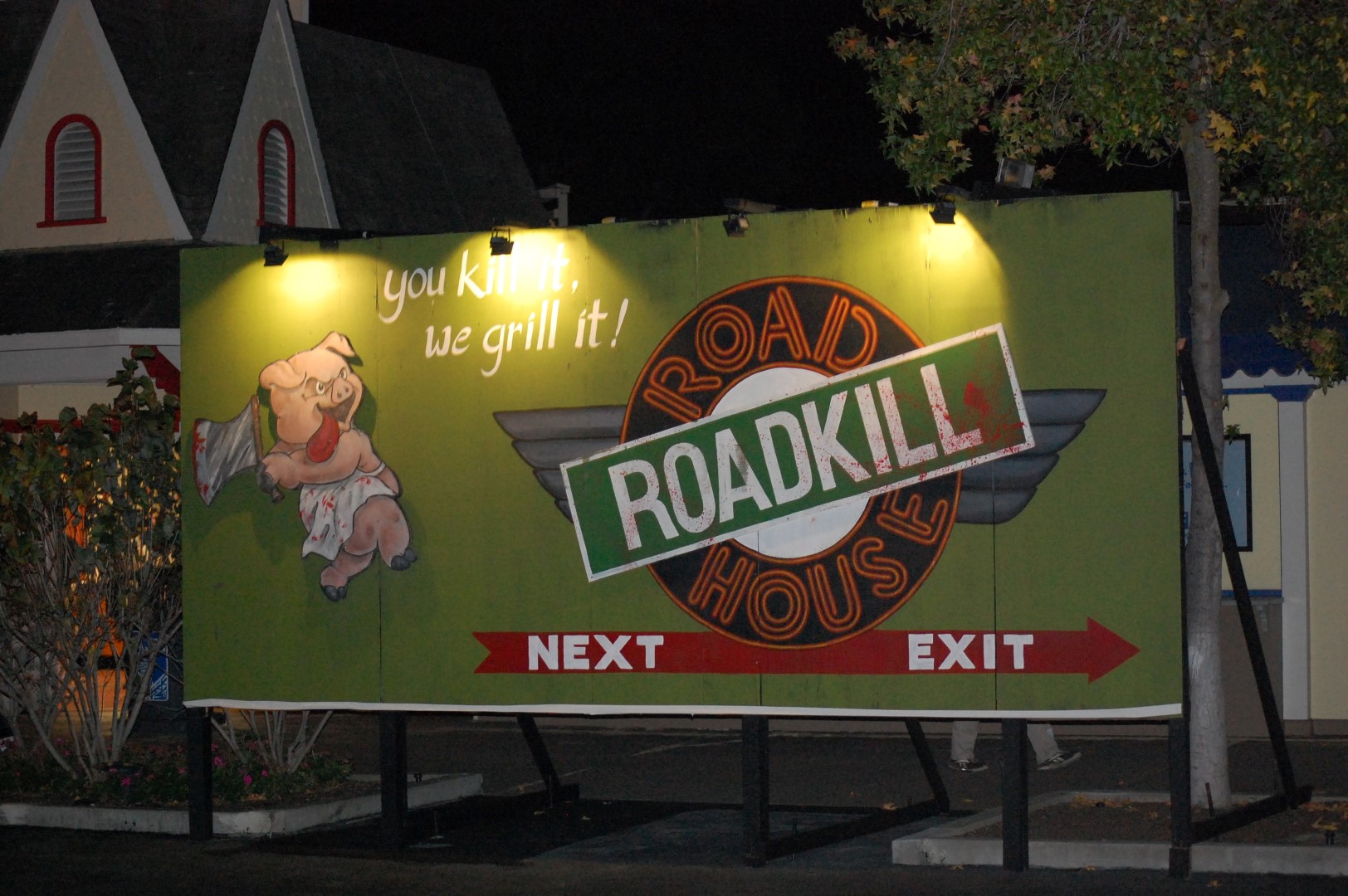 Toy Factory is the oldest maze at Halloween Haunt, and just a year ago we would have said it withstood the test of time. However, the rumors of understaffing at for Haunt this year all become painfully clear in this lengthy maze that features, maybe a handful of scares. The strobe light room remains and is admitablly still disorienting and fun. Aside from this redeeming quality unfortunately, the maze is thoroughly disappointing. The lack of actors is ever so apparent, the set seems to have deteriorated, and the overwhelming and repetitive soundtrack really takes away from the experience. If you are pressed for time at Haunt this year, skip the likely lengthy lines of this maze and spend your time elsewhere. – Toy Factory features a Skeleton Key Room. To keep Skeleton Key rooms a surprise, we will not be talking about what happens in the Skeleton Key room. (Skeleton Key Room Rating for this maze: 5.5) 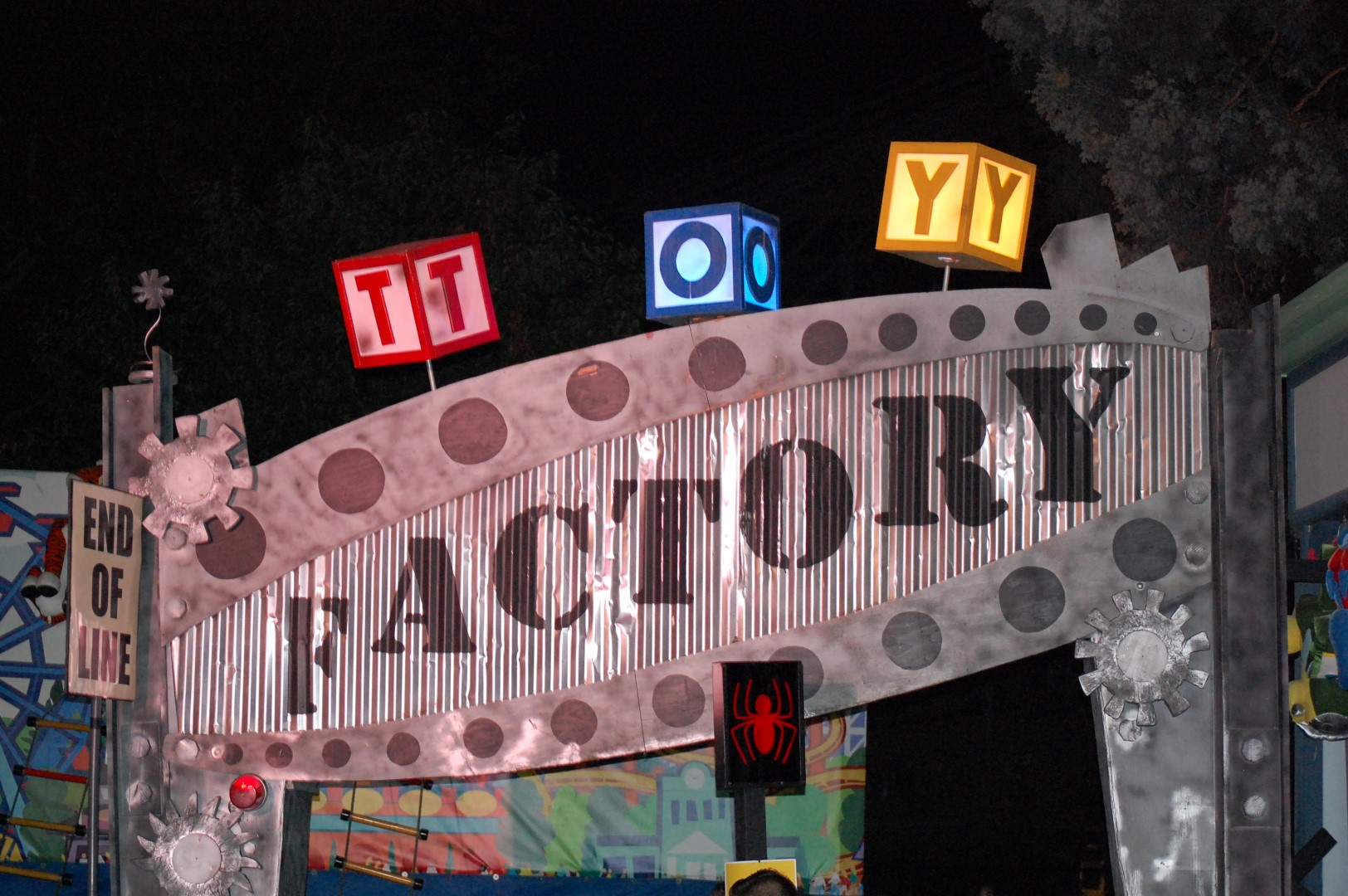 Although some other Californian mazes and Haunt attractions share a similar theme, I think it is fair to say that this maze is the most realized and satisfying mexican style experience. Guests are offered a pair of 3D glasses for a one dollar up-charge which we HIGHLY recommend, it really adds to the ‘trippiness’ of your experience. With incredibly beautiful and detailed neon sets, this maze is truly a spectacle. As it features indoor and outdoor sections, you are treated to variety of these crazy scenes each highlighted by an individual latin inspired sound design. The rain forest section we found particularly mesmerizing, but it is all of high quality. Unfortunately, as with a few mazes, it could use just a couple more actors. The final scare is always a goodie, and the disorienting set design makes it hard for the actors not to get you. Overall, we were very pleased with this maze and it is certainly worth any paying guest’s time. 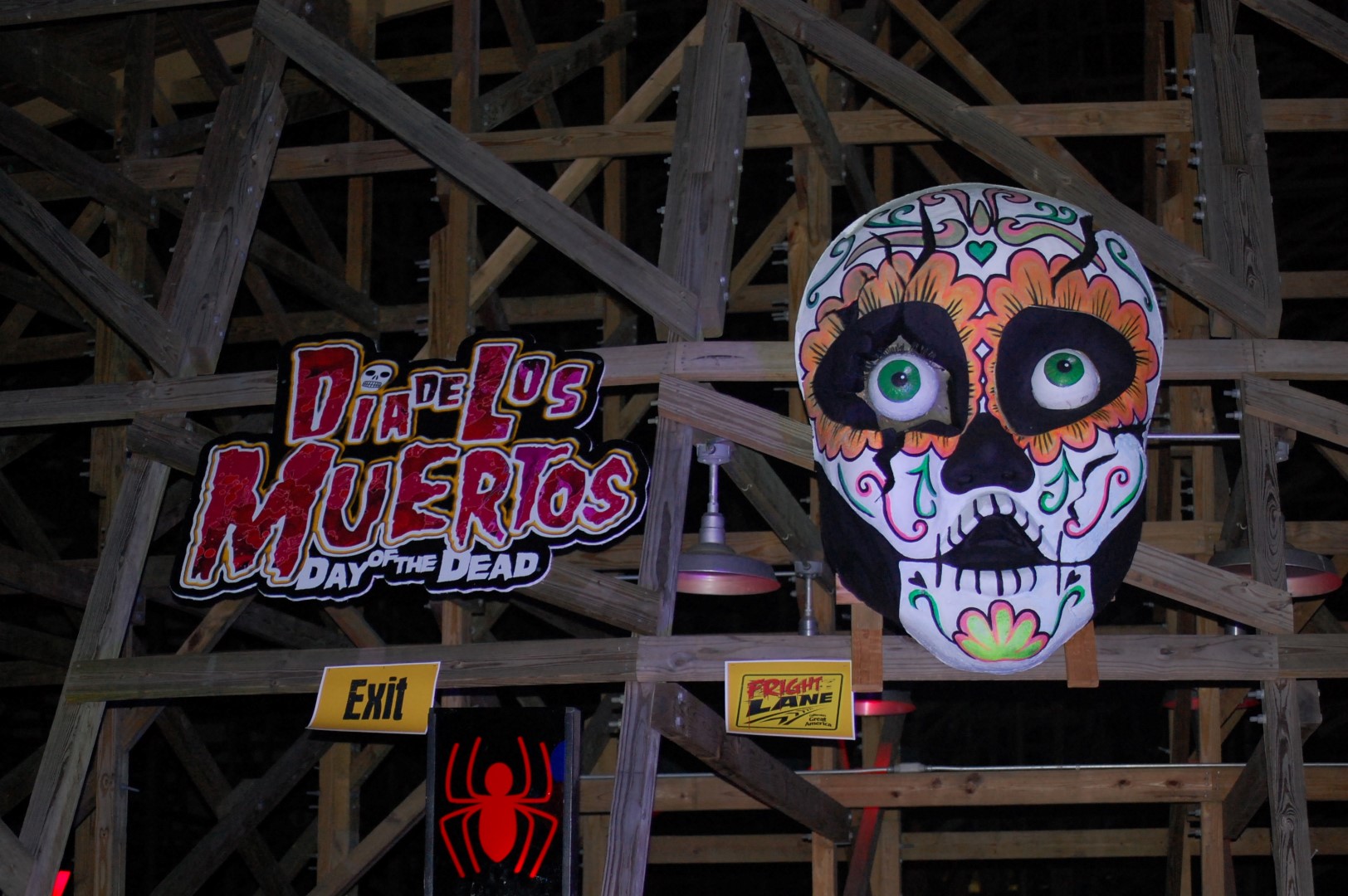 Zombie High is generally a highly regarded maze at Halloween Haunt, and in previous years this is deservedly so. Unfortunately, similar to Toy Factory, understaffing is a major downfall of this maze. There is a good bungee jump scare towards the back half of the maze, but other than that there are essentially no scares. The set seems impressive at first, and if more actors inhabited it, it would remain so, but as the maze drags on uneventfully, it’s hard to maintain interest in stacks of slightly skewed desk chairs. Especially towards the end of the night when they just started lining crowds through the maze with no space, it was the park guests who felt like zombies in this action lacking stroll through a relatively repetitive set. The music is also incredibly loud and distracting, which unfortunately only further breaks the immersion. Just like Toy Factory, the long lines of this maze are probably not worth your limited time. 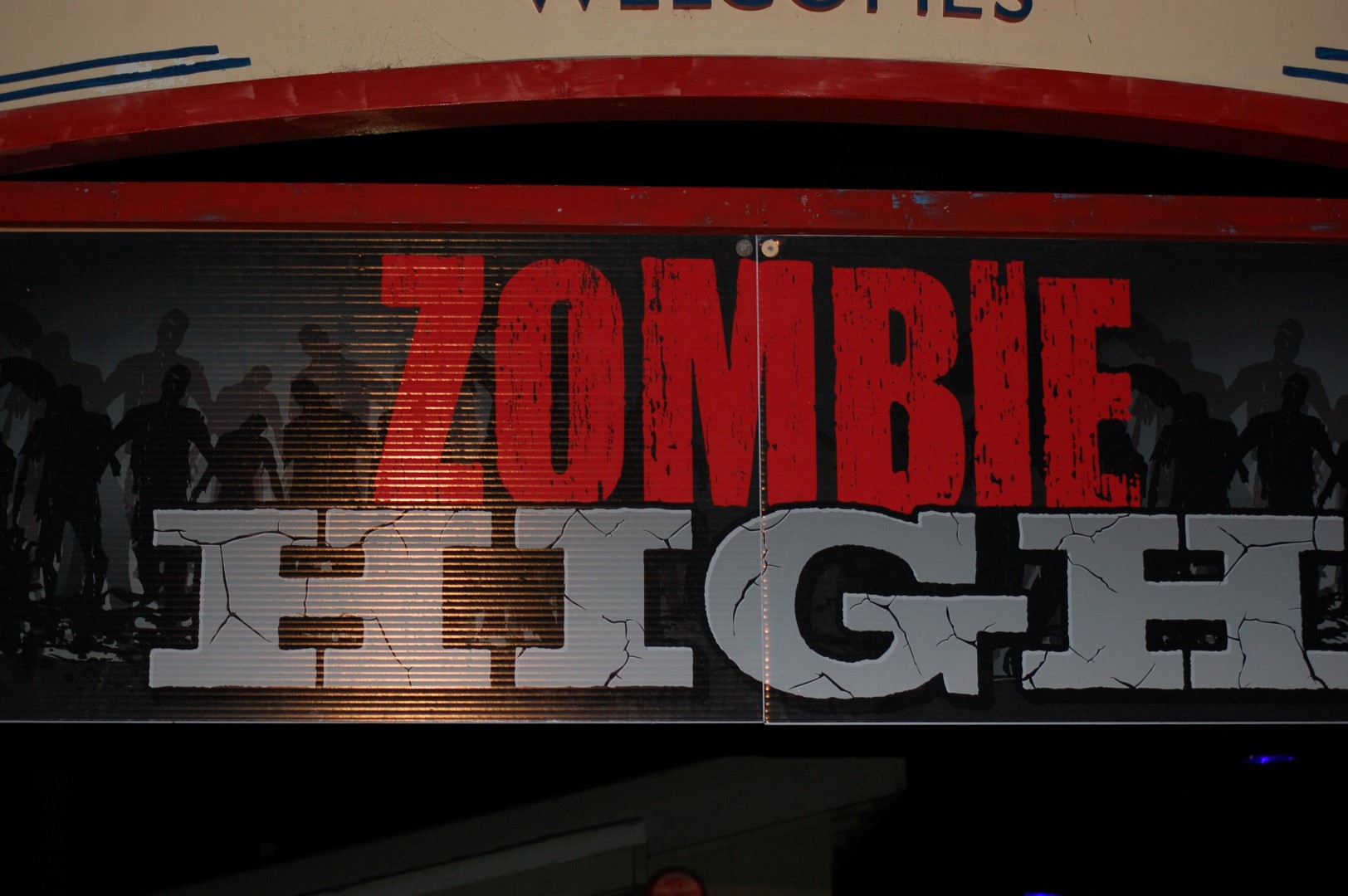 All new for this year is Insanitarium. Surpassing its predecessor in both quality and substance, we were very pleased with this brand new addition.The theme is interesting and well established, the actors and plentiful and evidently talented, and boy oh boy that Skeleton Key Room is something special, the maze is pretty dark and actor filled, but the somewhat minimalistic and repetitive set feels a bit stale at times. Many scenes seem to be repeated throughout which leaves the maze lacking a bit of pop. There are creative props provided for the actors to get some good and satisfying scary moments in. The maze is actually well drawn out and paced for occupying such a small building which gives the maze a very satisfying feel. I can’t stress the talent of some of the actors in this maze. From the dialogue they share with guests to the tag team scares they pull off to the genuinely unsettling facial acting, it is very impressive and just makes the experience feel all the more completed. As a whole, it would really be a shame to miss such a great and brand new maze despite its repetition, so make sure to check it out! – Insanitarium features a Skeleton Key Room. To keep Skeleton Key rooms a surprise, we will not be talking about what happens in the Skeleton Key room. (Skeleton Key Room Rating for this maze: 9.25). 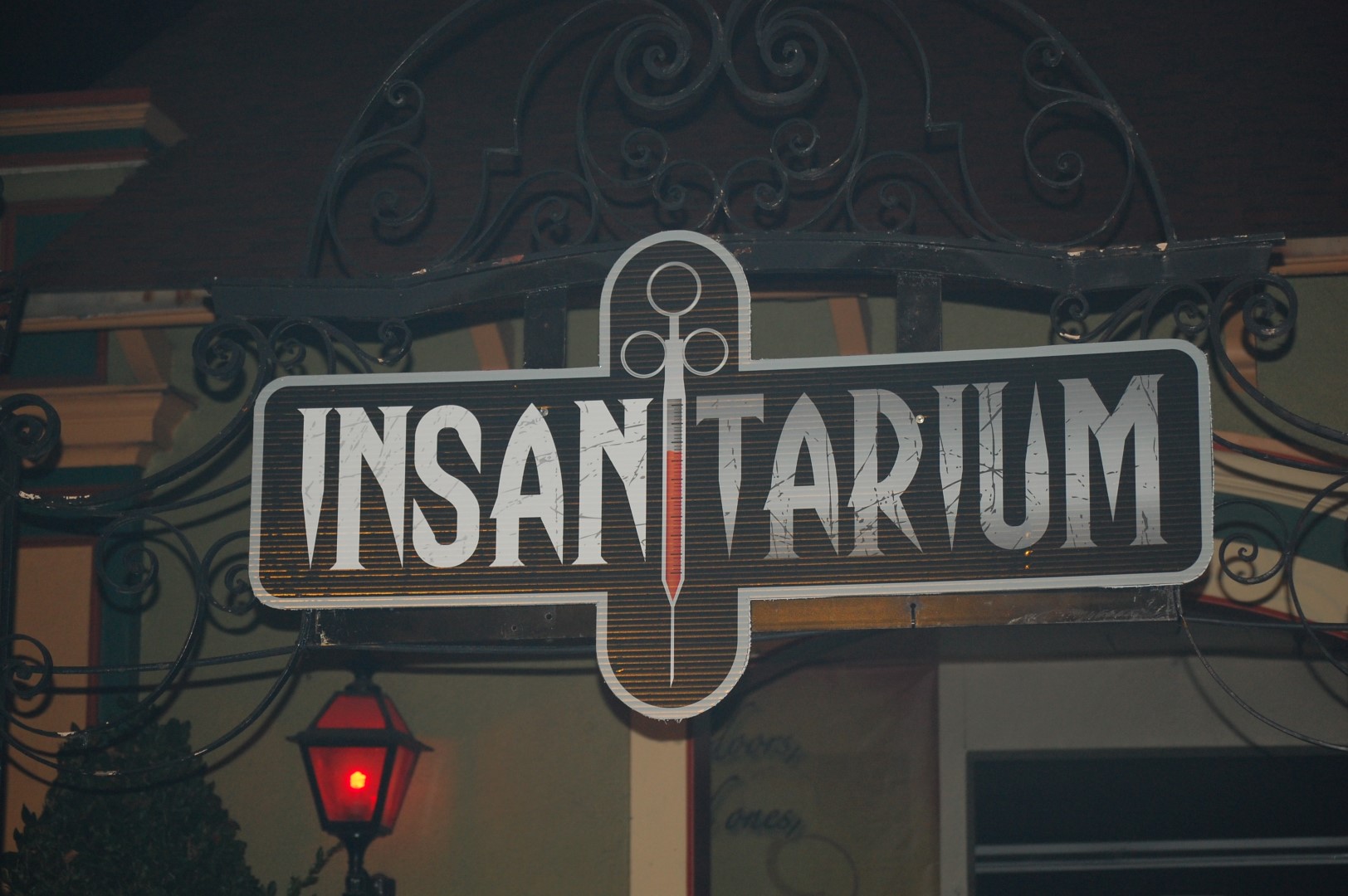 Overall, California’s Great America put on another great Halloween Haunt with some very solid mazes. Zombie High and Toy Factory specifically suffered from understaffing as well as some other problems, but the other six mazes were all more good than bad. With a great variety in themes, sets, and tone, it would be hard to make too many complaints about this year’s overall lineup of mazes, including the all new Insanitarium. We were very pleased with this high quality event, and despite some outliers, in general we loved the mazes at this year’s Halloween Haunt.

Thank you for checking out the Maze Ratings and Reviews of California’s Great America Halloween Haunt 2015, we will have the Scare Zones and Mirror Mirror Reviews LIVE soon, so check back! In addition, share your thoughts of the mazes with us below! What’s your favorite?