Continuing where we left off with Joker, it’s time to discuss the elephant in the room: Twisted Colossus may be everyone’s “favorite” coaster in California, but we struggle with calling it the best these days. Joker did a nice job of highlighting some of its old Roar sensibilities; similarly Twisted Colossus finally gave Magic Mountain the airtime machine it deserved. Polarizing, however, is the area of the ride’s functionality and execution: for all the elation felt when you get a racing ride on Twisted Colossus, the disappointment of non-racing rides seem to ring just a bit louder. In a very Six Flags move, their solution to this issue called for building another coaster elsewhere in the park that’s better designed to accomplish Twisted Colossus‘ most marketable feature. That brings us to… 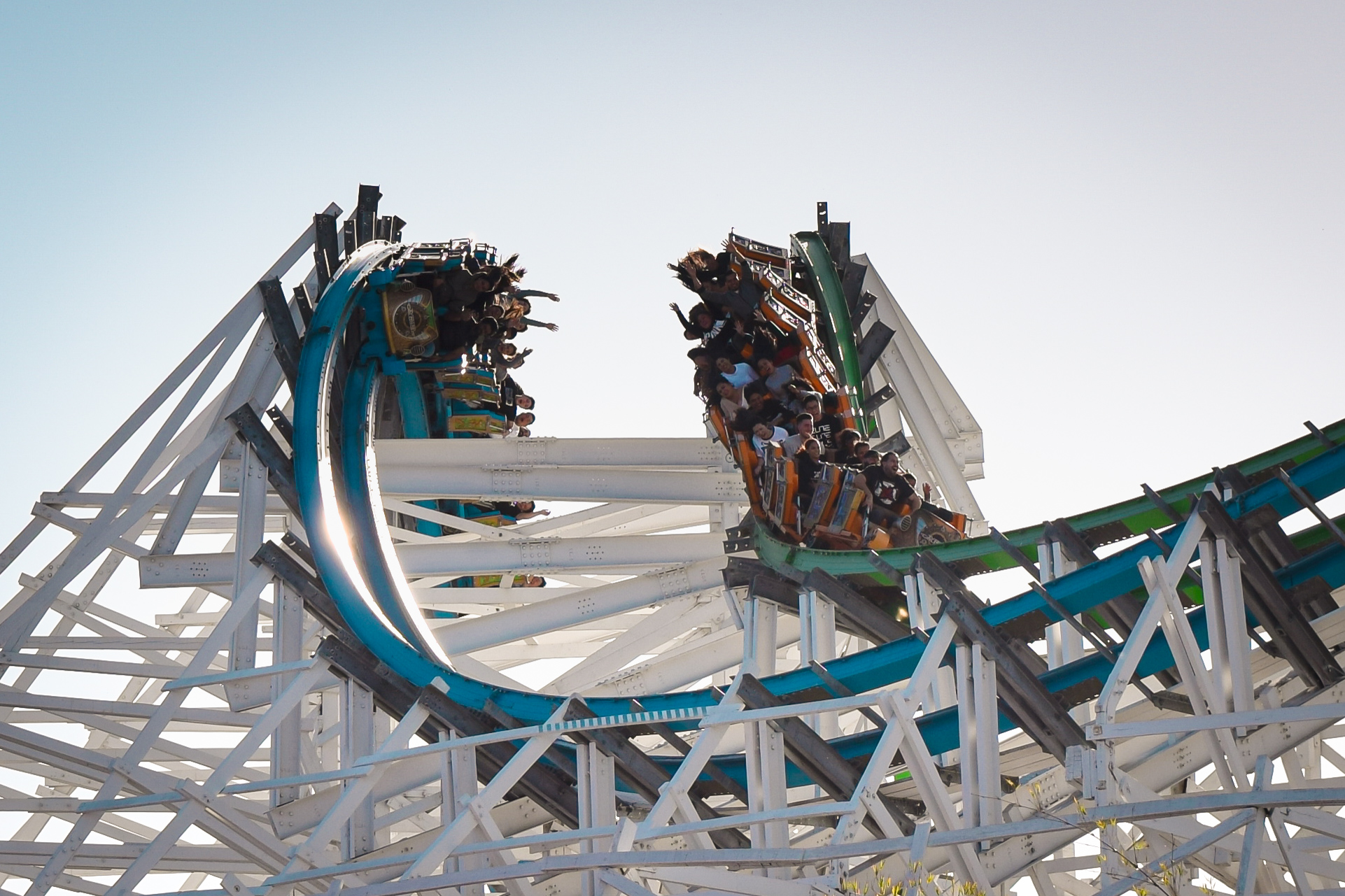 …West Coast Racers, who’s sole purpose in life appears to be highlighting the shortcomings of Twisted Colossus and Full Throttle. While it may not have the unrelenting airtime of the former or the impressive height and speed of the latter, West Coast Racers is the dynamic, Maverick-like multi-launch coaster and the dueling spectacle we were promised in 2012 and 2014, respectively. The West Coast Customs theme is dated-on-arrival and a bit of a headscratcher, but you can’t say that “The Undergound” doesn’t feel extremely Los Angeles. The ride’s not without problems, either: Premier’s infamous “Comfort Collars” seem particularly stupid when it’s plain to see that Full Throttle’s near-identical trains do not have them, and the 54in height requirement just adds insult to injury. Still, it’s a sufficient addition to Magic Mountain that’s perhaps, for better or for worse, the absolute most Magic Mountain-y ride they could have possibly built. 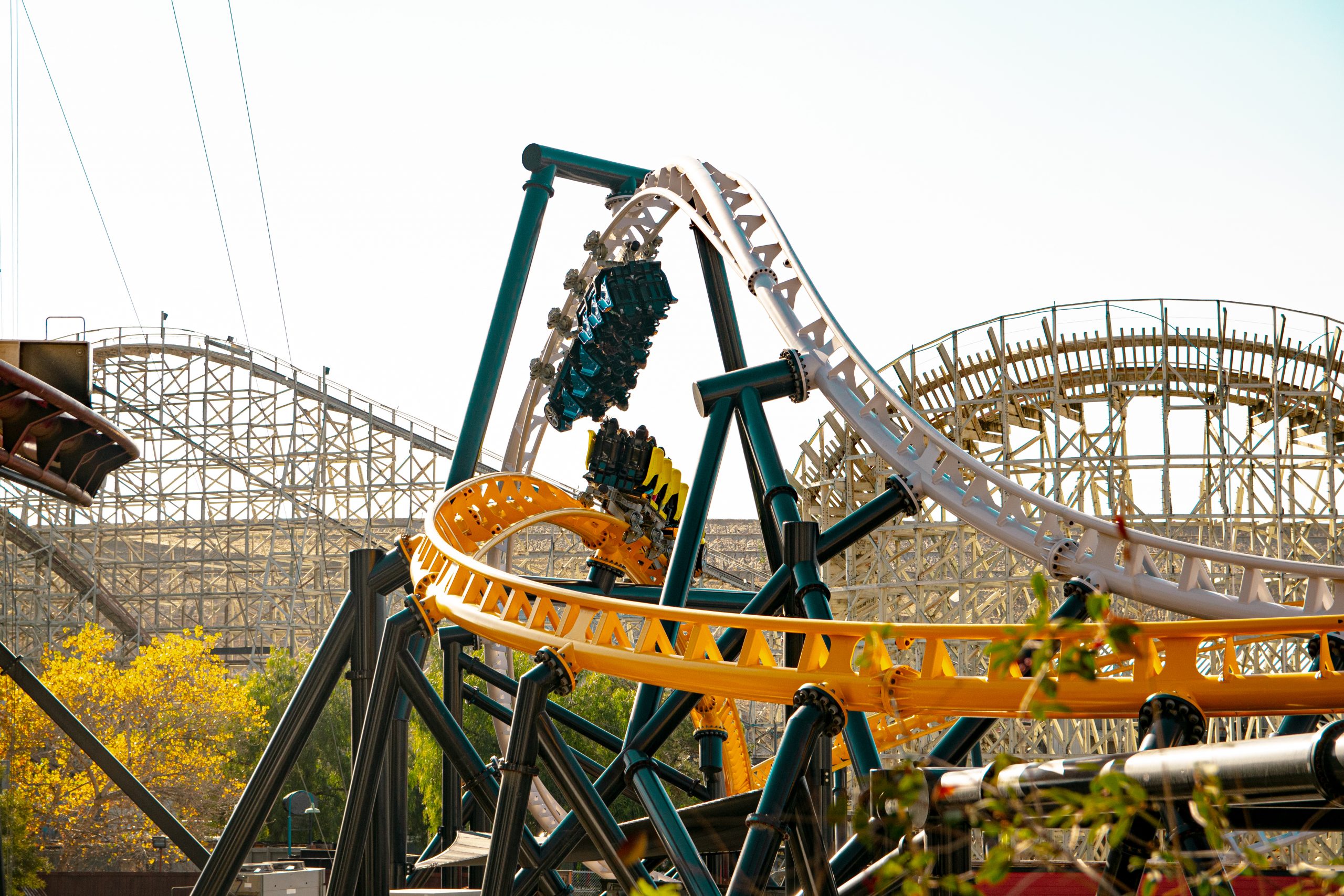 We want everyone to understand how amazing and special Flight Deck is. This ride was the first non-Batman B&M invert ever designed (sort of a dubious notation when the first Batman: The Ride was every bit as much a custom build as Flight Deck was, but hear us out), which means that this is possibly the oldest B&M coaster that doesn’t read like a clone. That’s a special thing. Flight Deck is a time machine that delivers us to an era where some of the strongest moments found on B&M coasters weren’t inversions, but rather, crazy-snug 270º turns immediately following an inversion (see also: Batman clones; Montu), and Flight Deck does it twice. Tight seatbelts be damned – put some respect on its name. 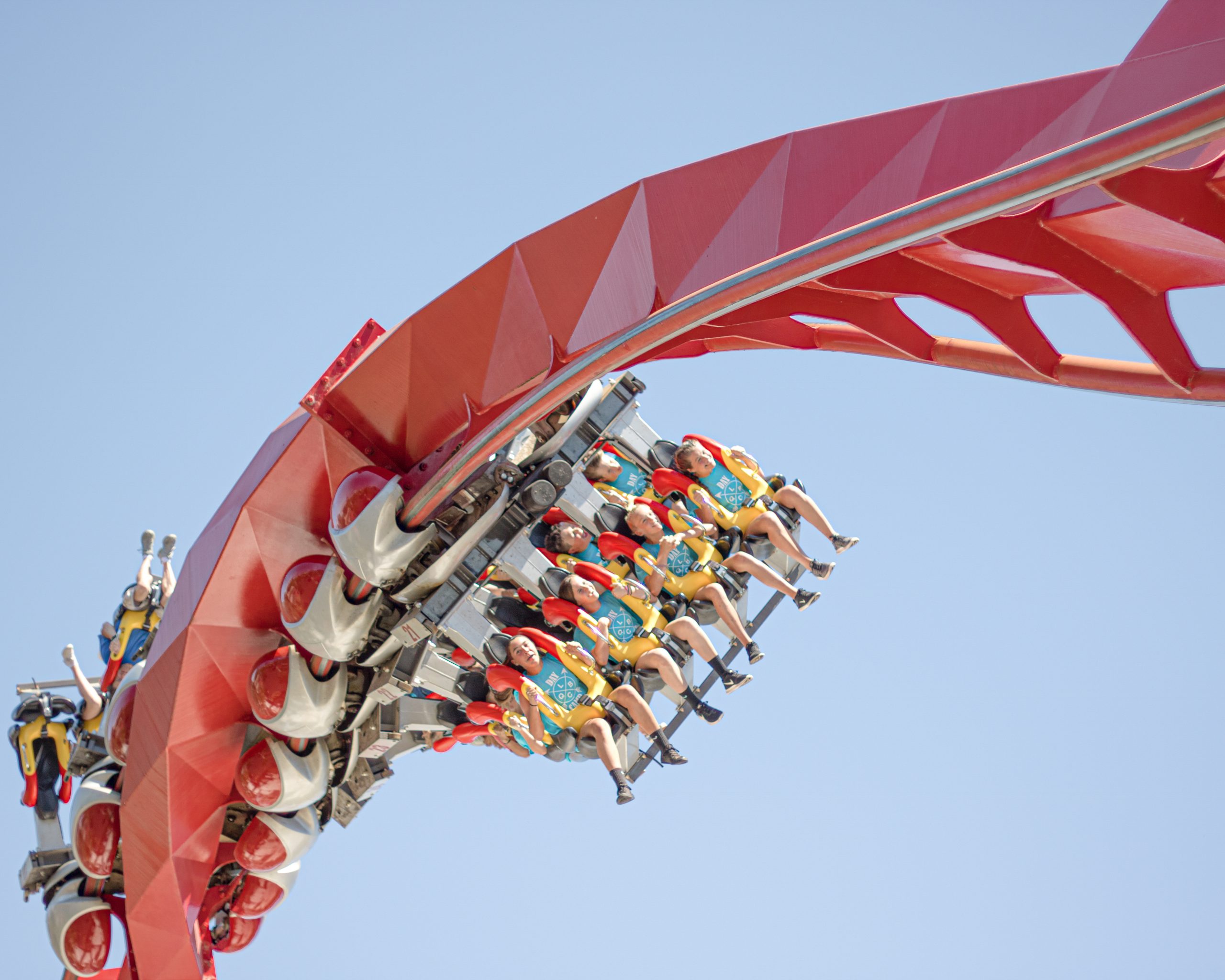 Is this indulgent for us to do? Despite being basically the mascot of California Coaster Kings, we’ve never placed Viper in the California Top 10 because we weren’t sure if it was “good enough.” Sure, we obviously like it enough, but is it objectively good? Do others like it? In the wake of the departure of Kings Island’s Vortex (making Viper the last of the five Arrow Loopers built with 6+ inversions), we think its market value is now at an all-time high: like the California real-estate it calls home, Viper‘s value only seems to go up, and its growing cult following seems to reflect that. All we need now is some fresh rolling stock – might we suggest Vekoma MK-1212s? 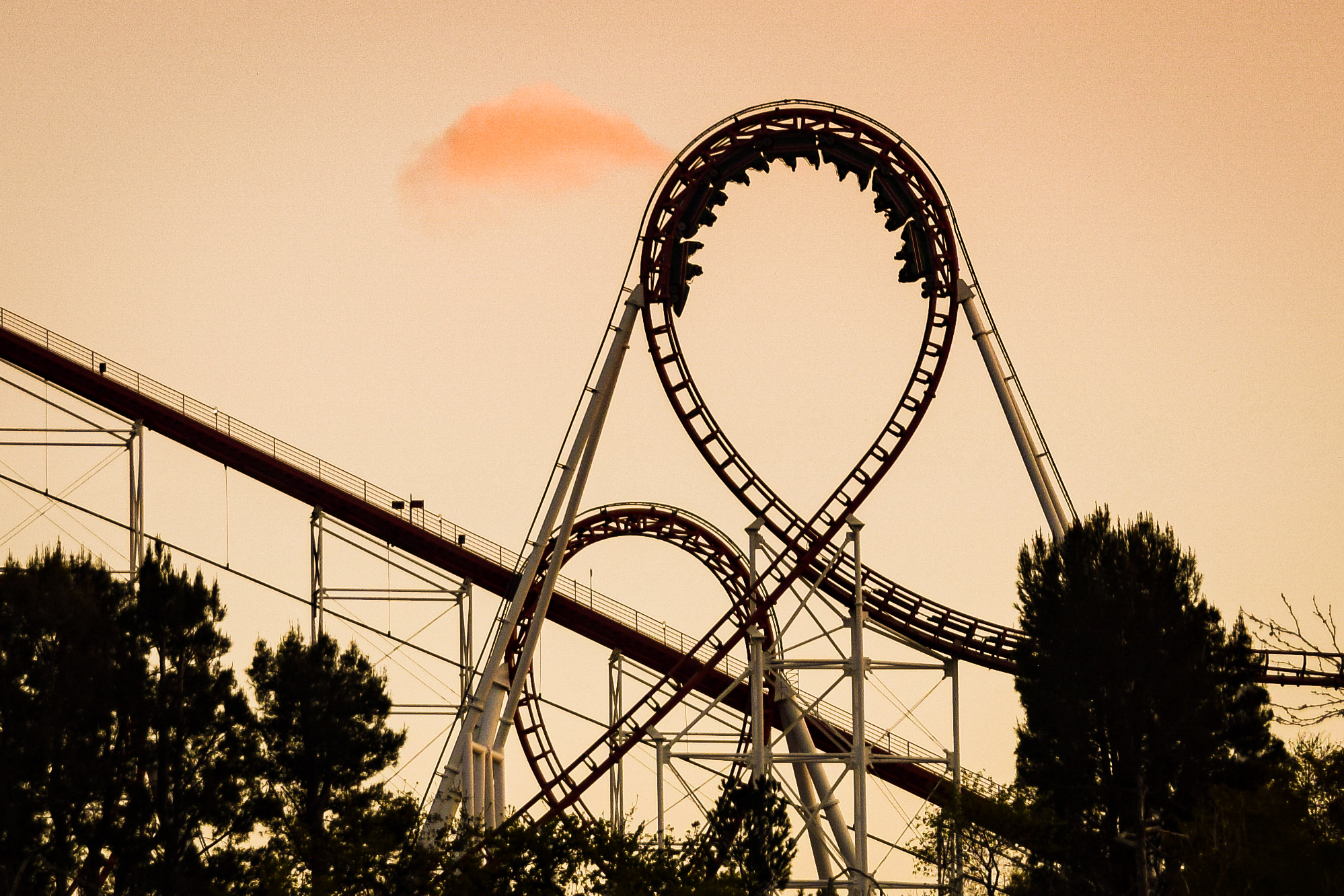 This is one that we personally wanted to rank higher, but we knew in our hearts wasn’t quite popular enough to justify a statewide Top 5 ranking. Riddler’s Revenge is, in short, the best Stand Up coaster ever built – but it’s still a Stand Up coaster. For us the ride is exceptional, valuable, and extremely 90s; pretty much perfect in all ways. We understand, however, that being the biggest, baddest, best Stand Up coaster is no match for people who simply do not enjoy the gimmick of standing while riding, and for that reason we compromised on a more modest position for arguably the best B&M in the state. 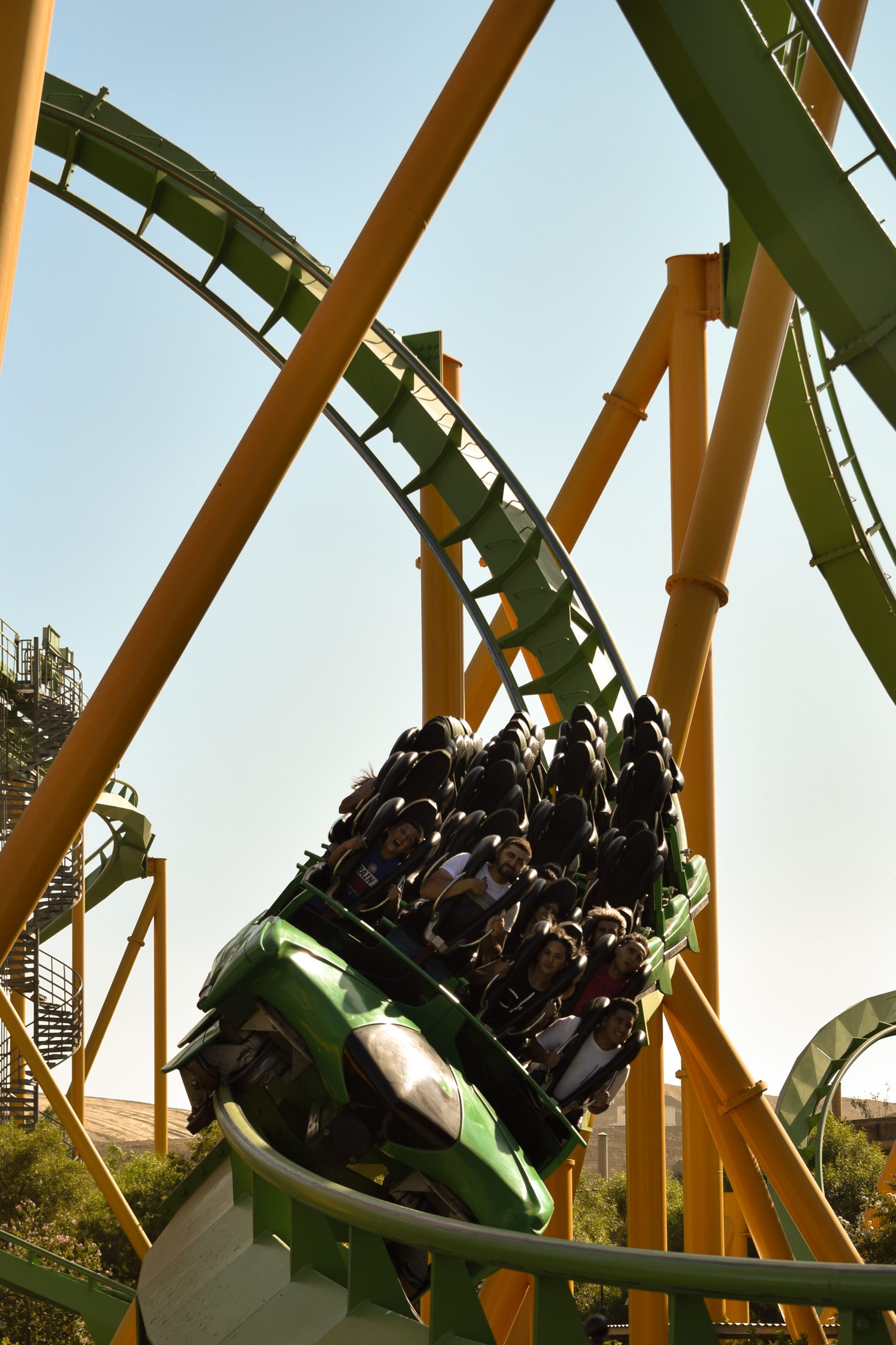 Xcelerator is a one-trick-pony, but damn is it a good trick. We’re pretty easy to satisfy when it comes to launch coasters – lapbar-only trains and a 0-132kph-in-2.3-seconds launch is honestly more than enough for us to give Xcelerator top honors, even if everything post-tophat is pleasant at best. We’re incredibly relieved to see Intamin once again offering lapbar-only rolling stock for the bulk of their coasters, but we may never again see them pull off a rate of acceleration like this. Also, one more shoutout to Knott’s maintenance department for whatever witchcraft you perform to keep this ride running. 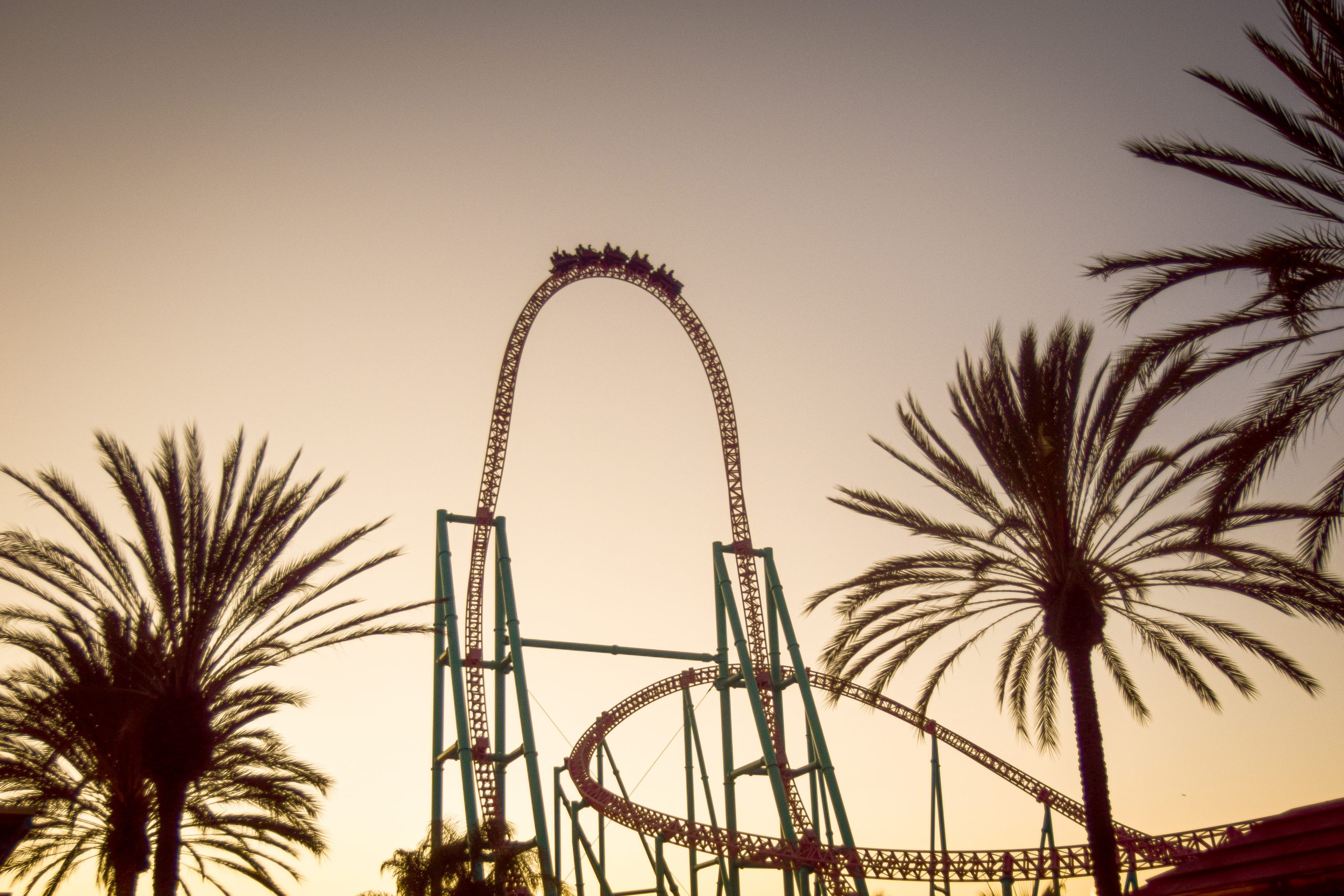 As huge fans of wood coasters, we’re pleased to have such strong specimens in California. For over two decades, Great America had a reputation for being the last place you could go to find a decent wood coaster (sorry, Grizzly), but since 2013 the patriotic park has been singing a different tune. Gold Striker is everything you could want out of a GCI: lightning-fast pacing, smooth tracking, strong laterals, and great airtime. The location of the ride is also a lot of fun; the gaps around existing infrastructure toward the front of the park made for a compelling obstacle course through which to weave a major coaster through, and as usual GCI rose to the challenge. 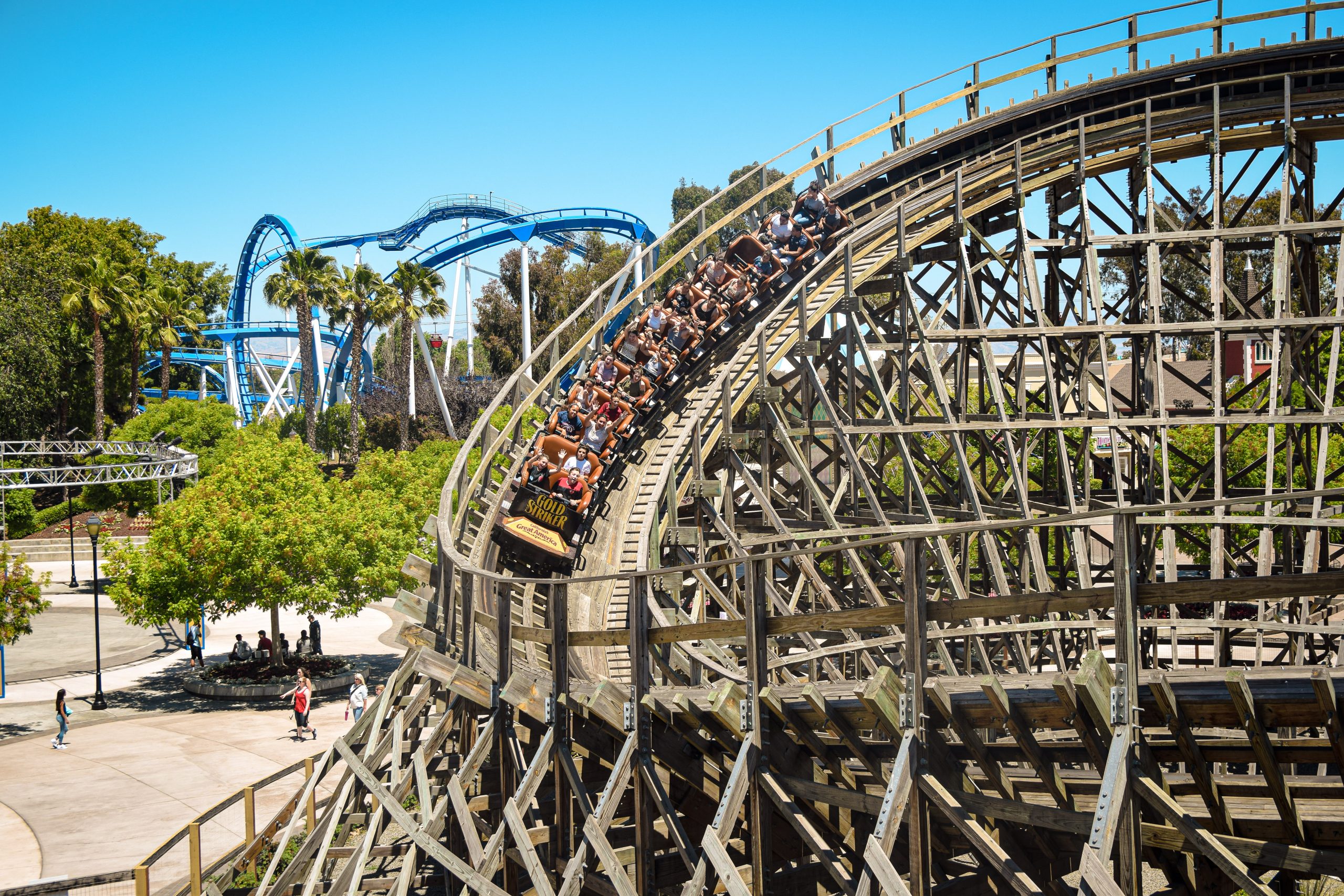 Speaking of GCI rising to the challenge, the reborn GhostRider at Knott’s Berry Farm is a power move we wish to see more of; we’re so enamored with its transformation, we can’t help but name it the state’s best wood coaster. Still with a little Custom Coasters International life in its bones, the totally reprofiled and retracked coaster serves now as one of Great Coasters International’s most popular projects and greatest triumphs – we don’t exaggerate when we say that GhostRider is both the best and most popular ride at Knott’s despite being surrounded by two decade’s worth of newer steel coasters. 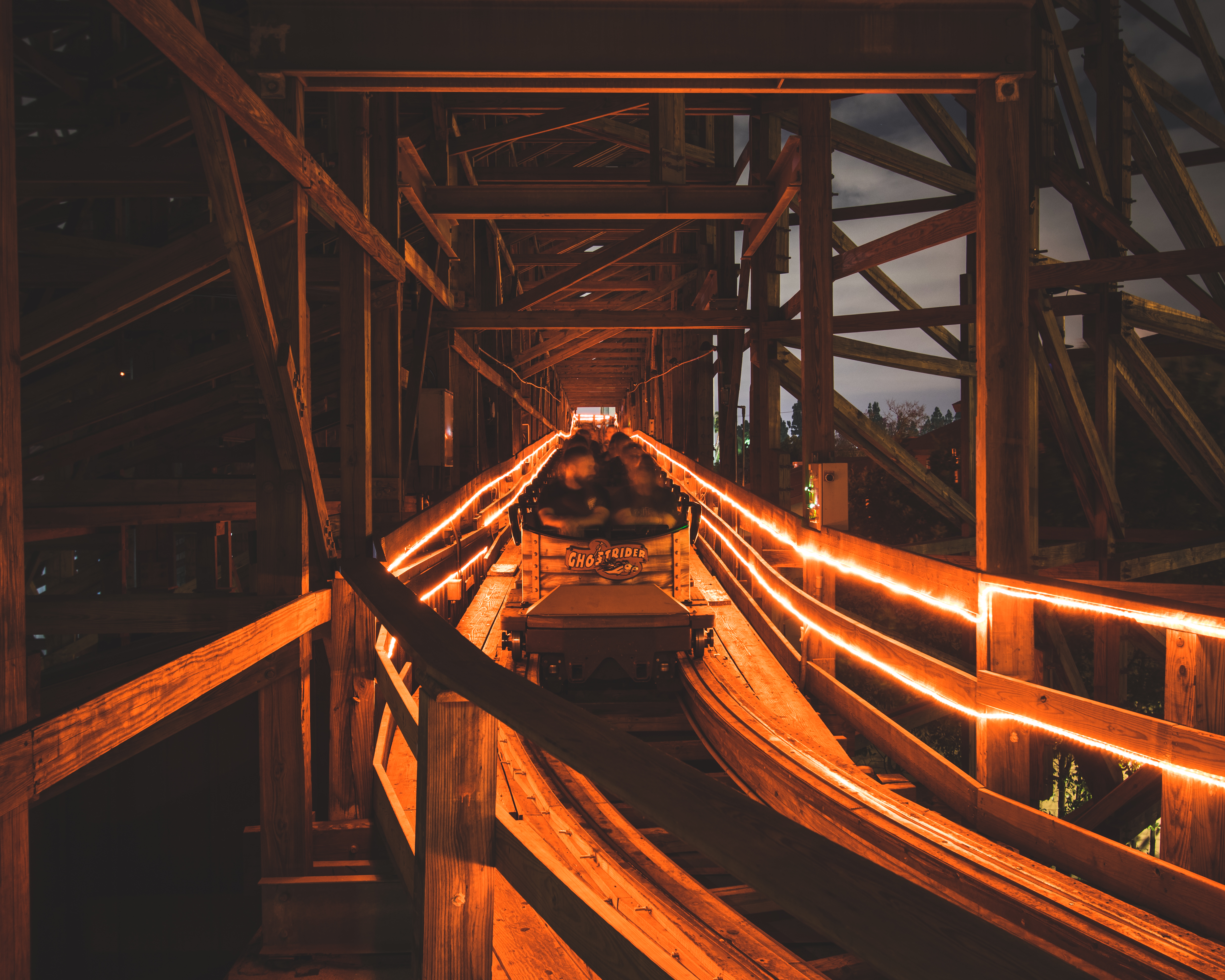 Not yet content with having what was already widely accepted as the World’s most intense coaster line-up, Magic Mountain dug in their heels for yet another bone-crushing endeavor in 2006: Tatsu. This B&M Flyer’s gentle first half is enough to lull unsuspecting riders into state of total relaxation before the 170ft pretzel dive bodyslams its victims into the dirt, followed immediately by a barrel roll and a 270º turn around that waves its lifeless passengers around like tattered flags of victory. Aside from its fading colors, Tatsu has only grown stronger with age, and remains the only truly terrain-based and hyper-sized (with a total height variance of over 61m) flying coaster in the World. 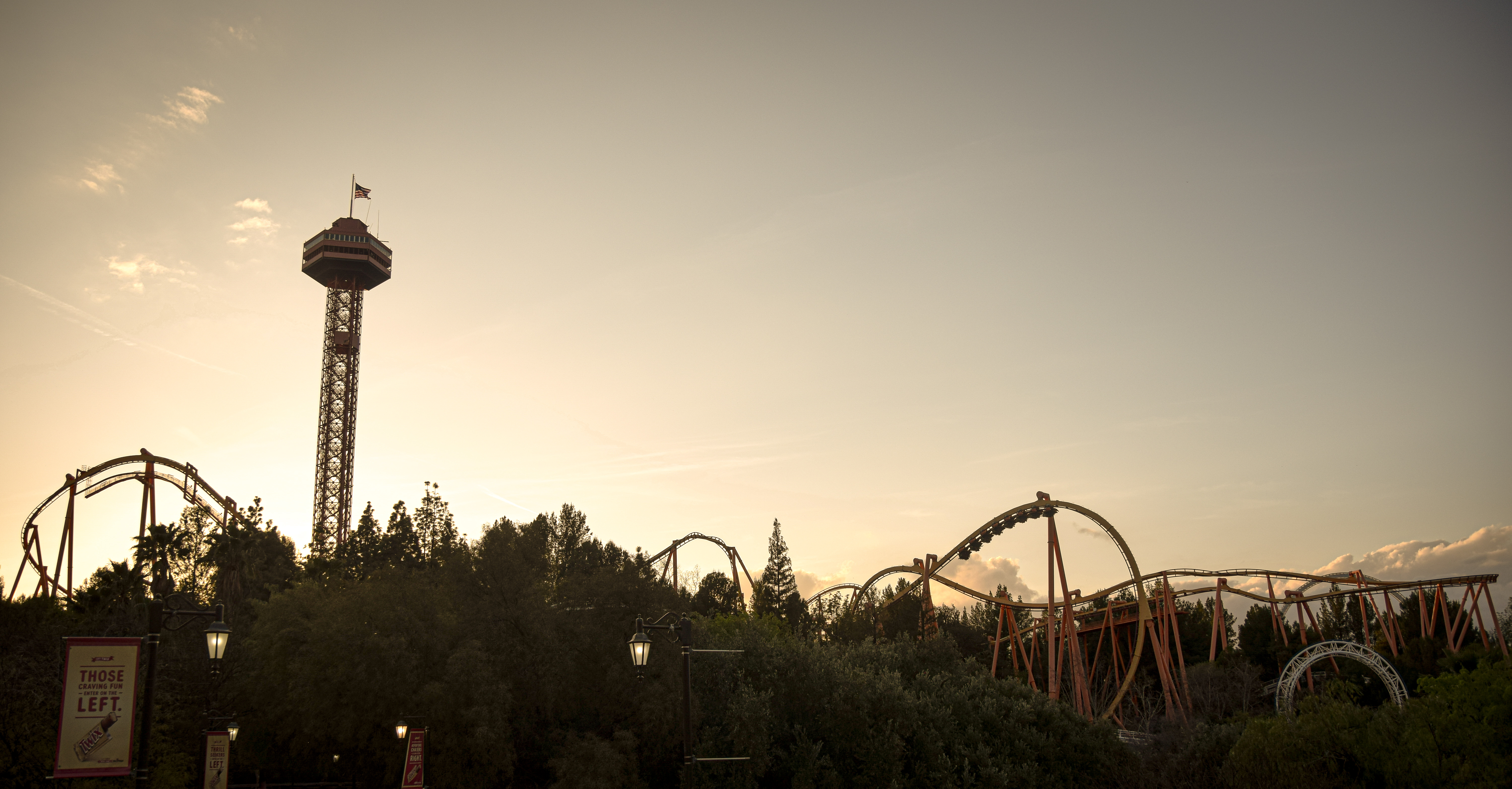 It had to be you… It had to be you! Of course our #1 coaster in California could only be X2. For many, X2 remains some of the most memorable coaster-related physical and emotional trauma imaginable – it’s pretty much standard across the board, from coaster enthusiasts to casual parkgoers, that the average first ride on X2 comes with more than its fair share of tears, cold sweats, and wet underwear. This Arrow Dynamics icon from everyone’s favorite roller coaster mad scientist, Alan Schilke, remains the most enigmatic and terrifying coaster in the Western Hemisphere by a large margin, bested only by its updated S&S siblings in Asia. It’s still the signature ride of the World’s largest and most thrilling collection of coasters after 18 years, and X2s omnipotent reign shows no signs of slowing down. 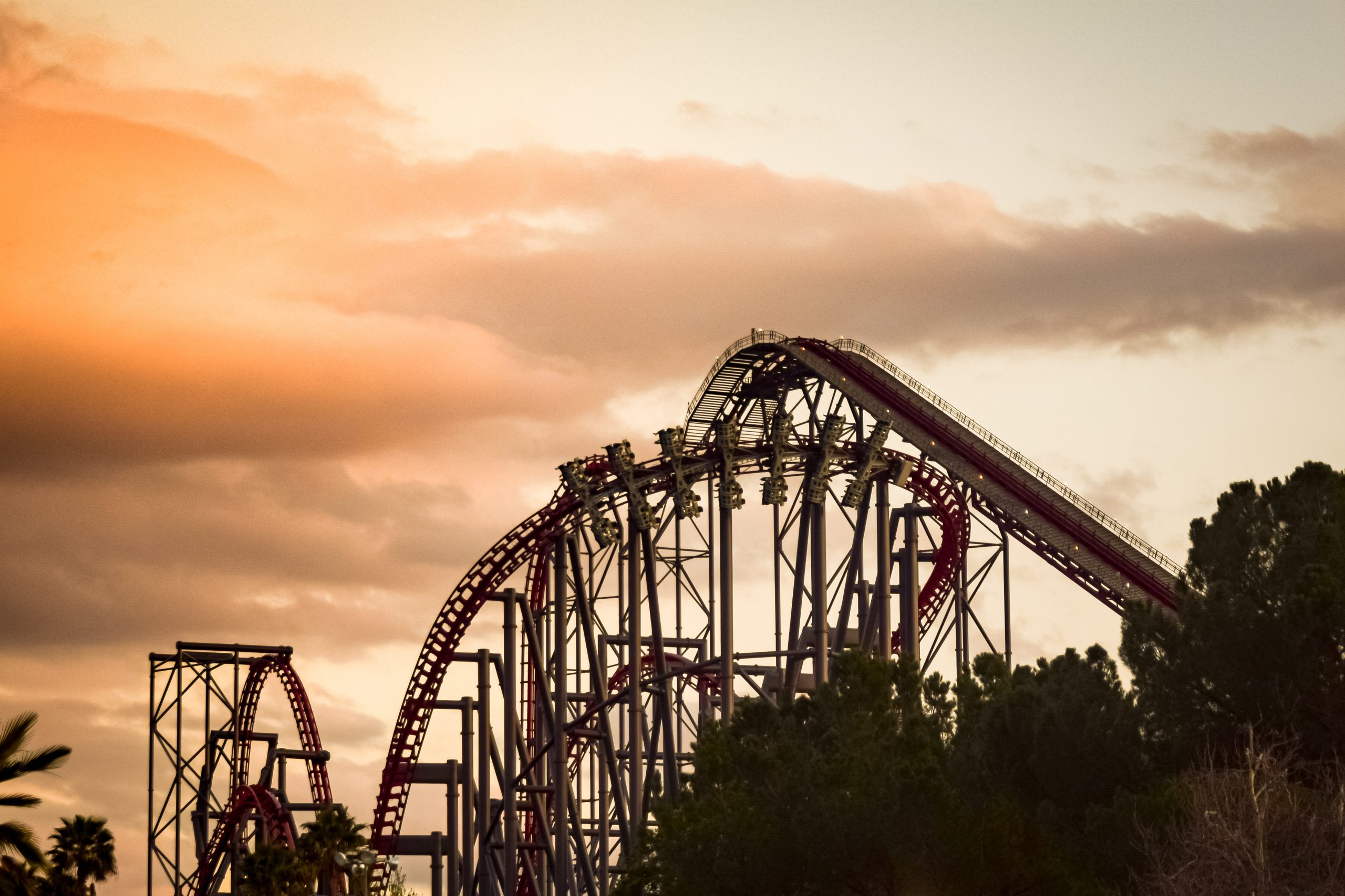 This concludes Coaster Kings’ California TOP 20 Coasters – 2020! With more great coasters on the way (we’re looking at you, Emperor), we can’t wait to see what the future holds for California’s coaster collection. If you like our content and are looking to support our website, consider shopping on Shop Coaster Kings, or Shop Coaster Kings Europe this holiday season!