Sean: I am going to say it right off the bat,  I am absolutely in love with the country’s two Busch Gardens parks. After dying over how amazing Busch Gardens Tampa was, I am now back to share with you all my fascination with the smaller, higher-detailed Busch Gardens Europe, a.k.a Busch Gardens Williamsburg.

Instead of giving a full trip report from our day at the park, we’re going to take a look around the park and discuss this park’s stellar coaster line up and natural beauty. Please be advised, due to the park’s layout and locker policy we are missing several shots of coasters, so they will be discussed, even if a picture is lacking. 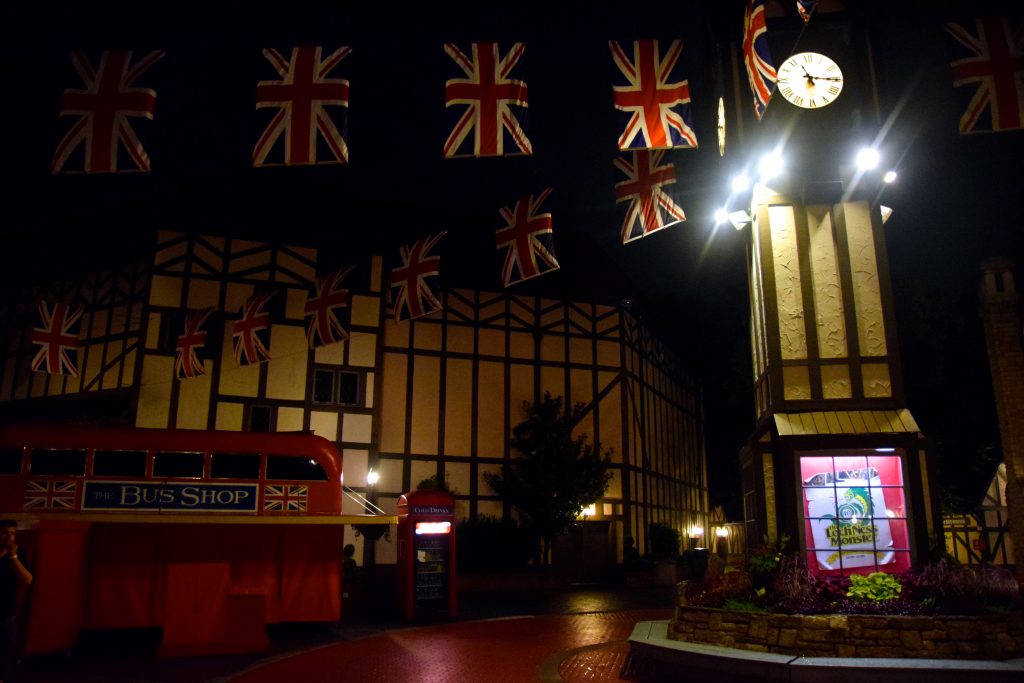 Let’s start with the England section that we actually did not visit ’til 2 hours after park close, this is the entry to the park and is a great indication of the amazing scenery that is yet to come. 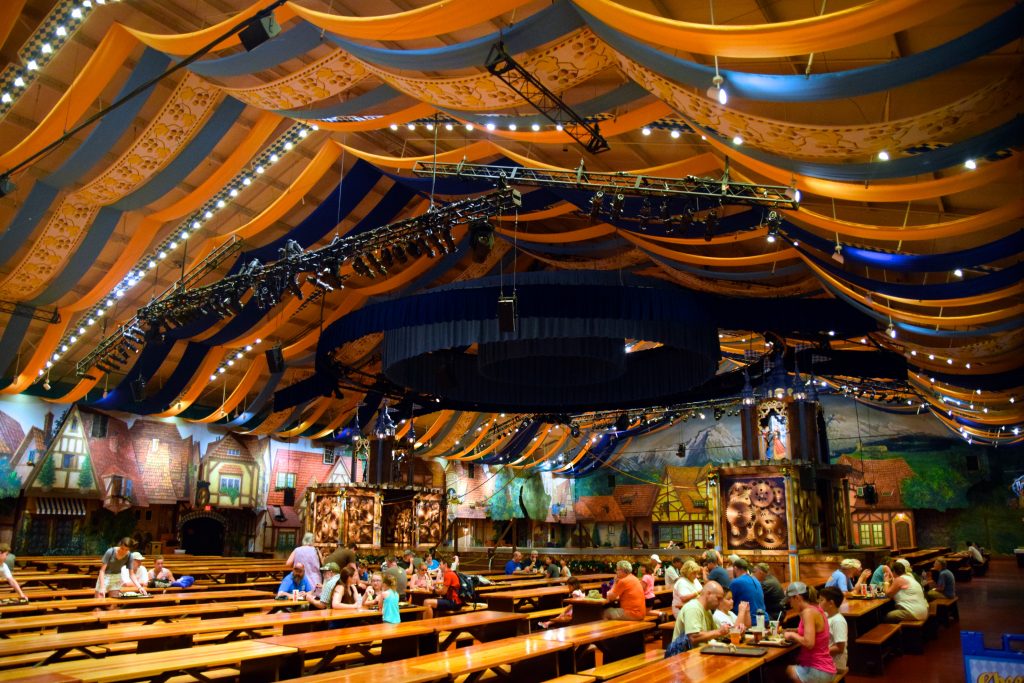 Another important section of the park is the Okroberfest section, which is home to the park’s giant indoor food court and show venue, the Festhaus. 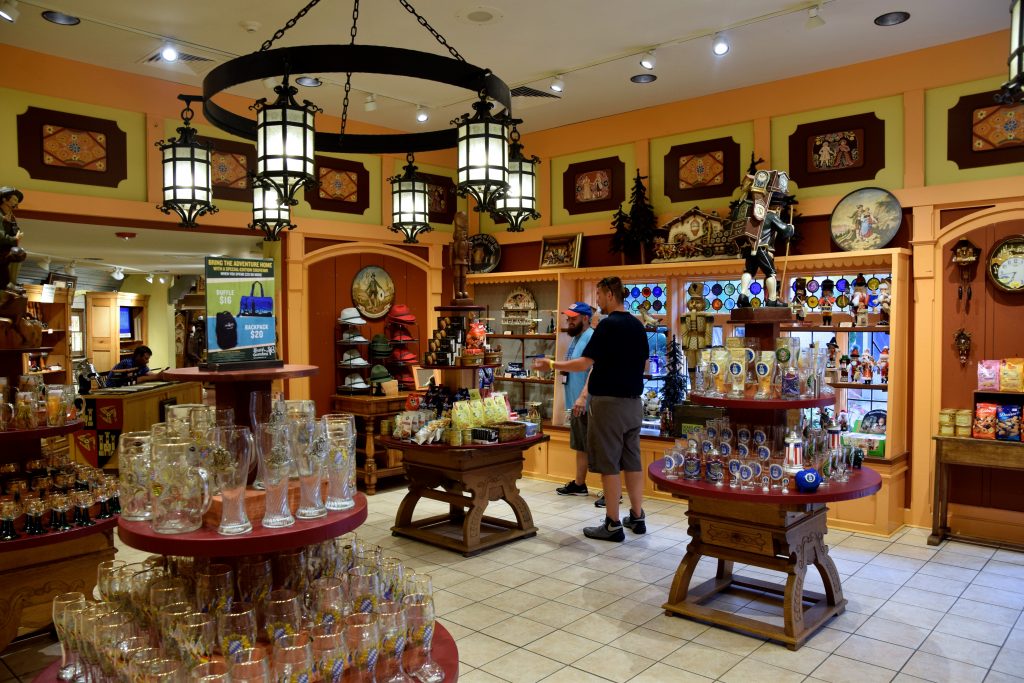 The park also scores high when it comes to merchandise and shops, there are plenty of themed gift shops including this German beer stein store. As avid readers will know, I was born and raised on the German border, and I was getting a real kick out of all the German theming and merchandise. 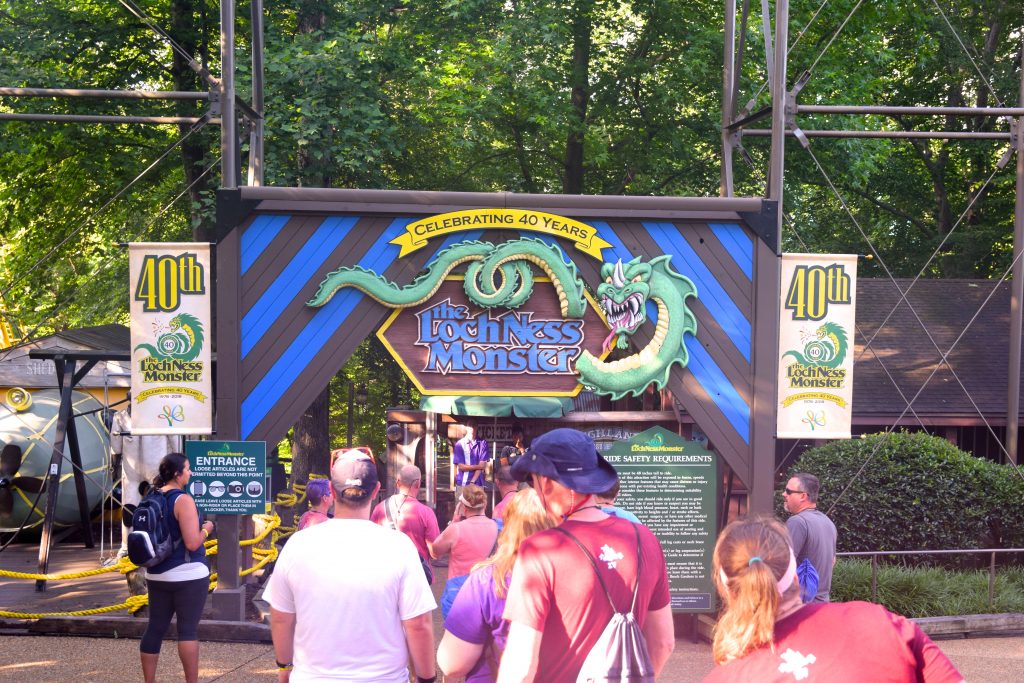 Another big surprise was Loch Ness Monster. But not in a good way. We had ERT on Loch Ness Monster as part of our Coaster Con itinerary, so that is where we rushed to first. Unfortunately Loch Ness Monster fell short to my expectations. I was happy to reride it a couple of times all over the new trains, but the ride was too mellow for my liking. More on that later. 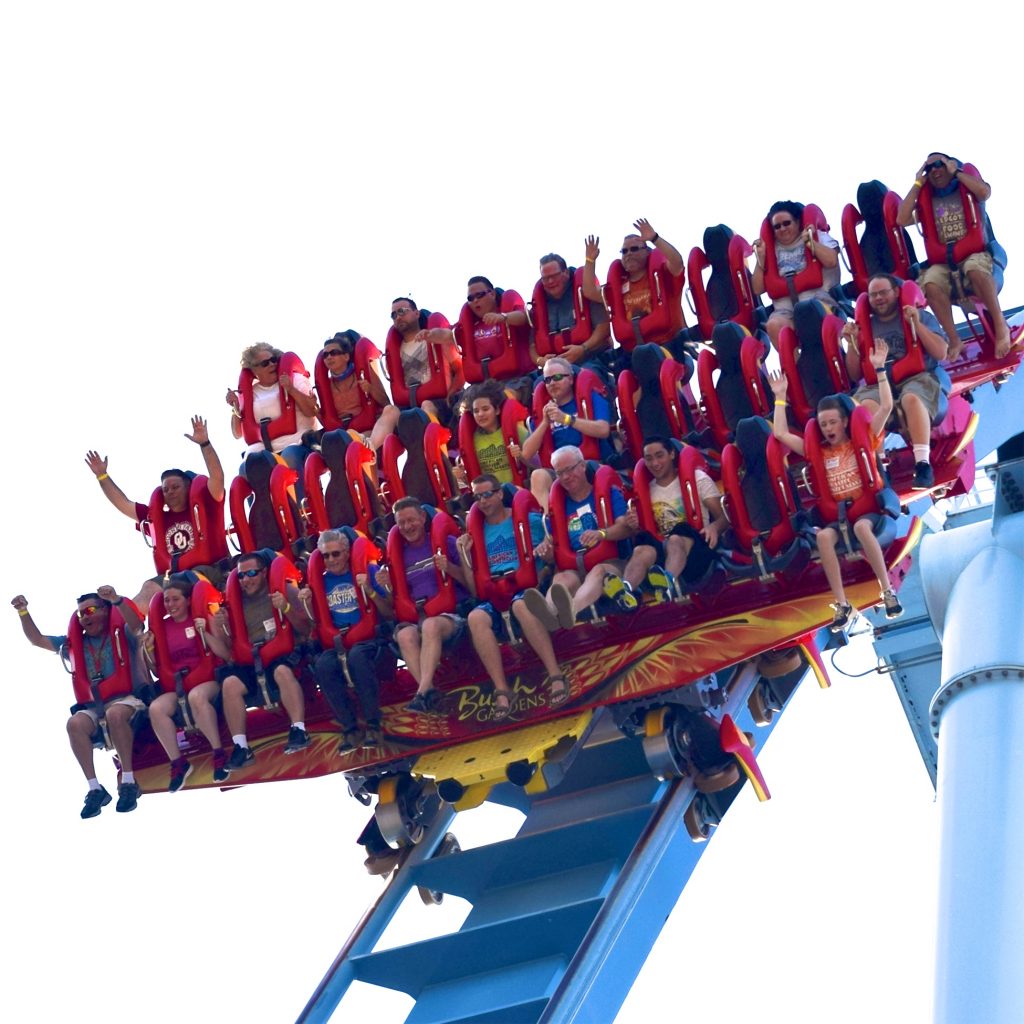 Also part of the Exclusive Ride Time was Griffon! The park’s largest coaster. Griffon was the first dive coaster to feature floorless trains, and the first to offer a seating arrangement of 10-across. The ride is the tallest structure in the park and offers an amazing view of the bay/ocean, and the Anheuser Busch factory! The drop, much like on Tampa’s SheiKra is phenomenal. 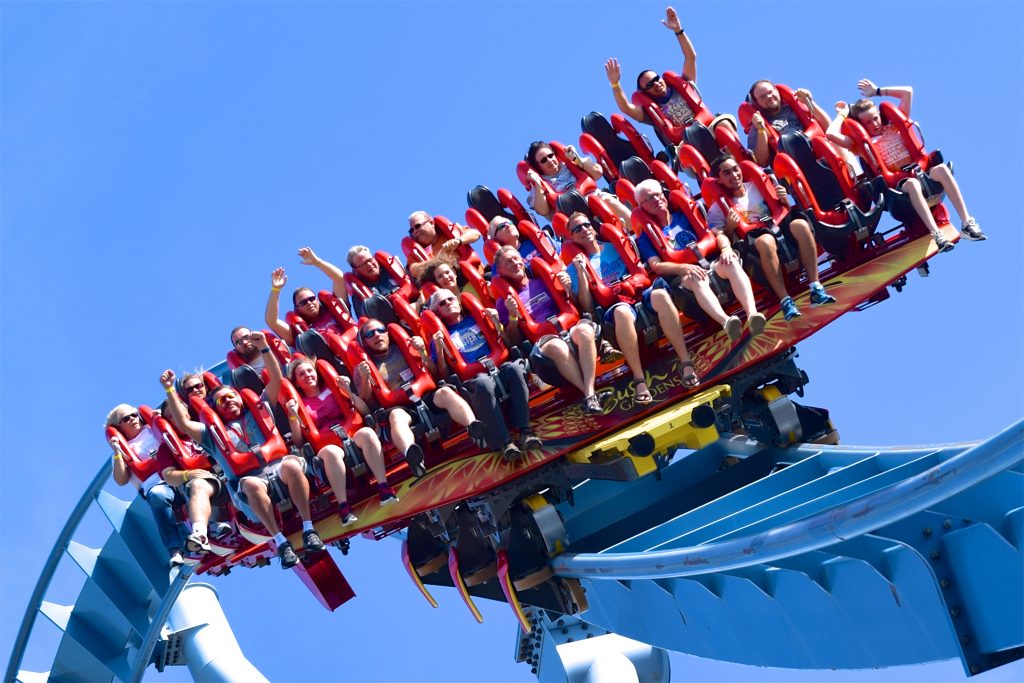 The ride, though bigger, features a more simplistic layout that really suits the park’s terrain, including 2 vertical drops that are both followed by Immelmans. 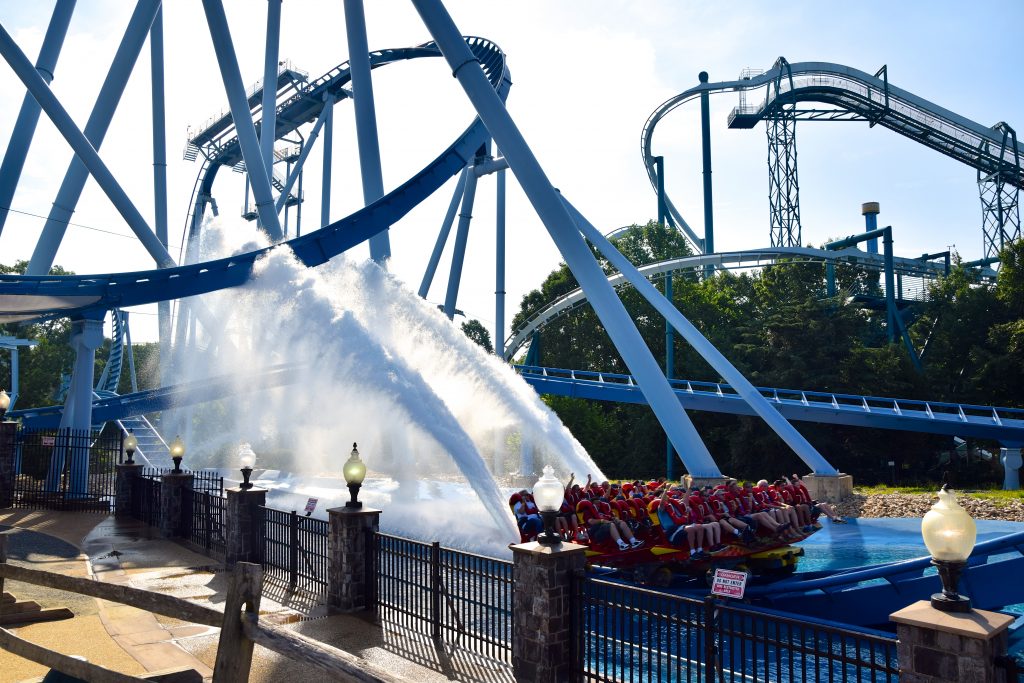 The splashdown on Griffon crosses below two sections of track, which makes for a cool effect. On this installment too by standers get the chance to get extremely wet. For those wondering, riders actually do not get wet. 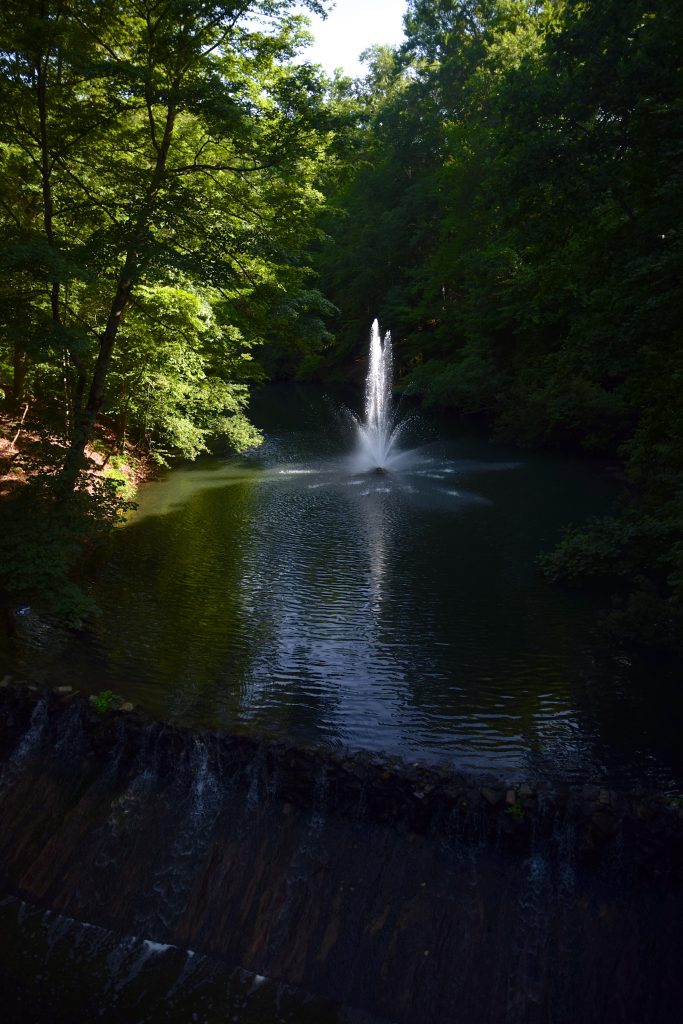 Busch Gardens Williamsburg has received various awards for its stunning natural beauty. I had high expectations and was still very impressed. Everything is incredibly polished, there is a big river running below the park, waterfalls, rocks, forestation, there is plenty of it all and it really is stunning. Even the park’s landscaping, flower planters, queues, etc are beautifully maintained. This is one of those parks that is perfectly enjoyable to spend a day at, even if you do not ride a single coaster. 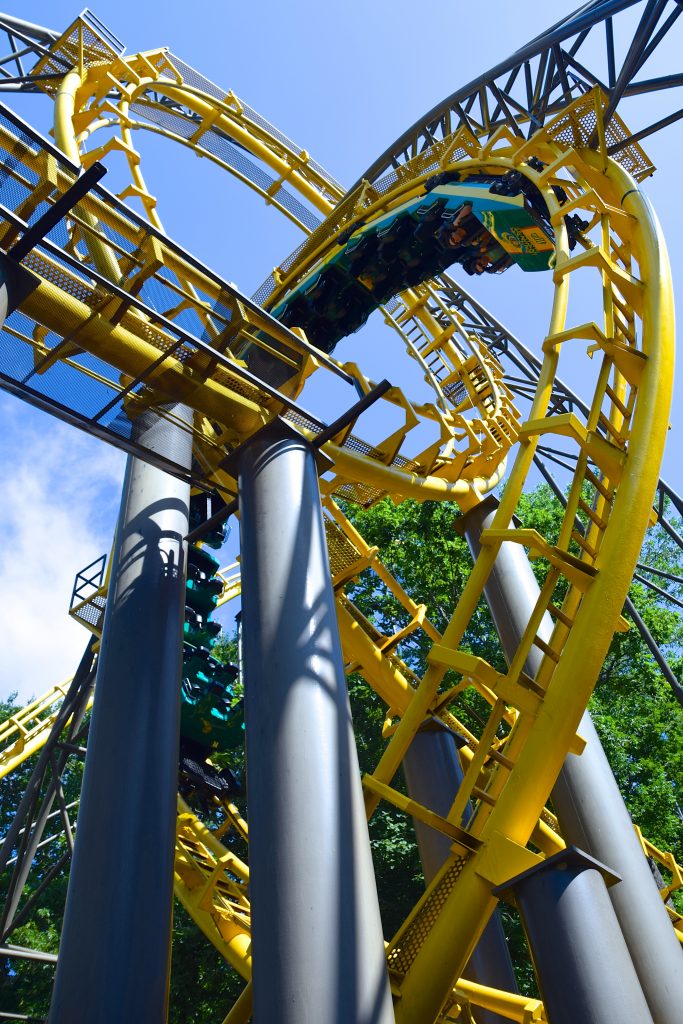 So I wasn’t the biggest fan of Loch Ness Monster due to the lack of intensity on the ride. It is not to say the ride is bad by any means, it is a very enjoyable scenic ride with the iconic interlocking loops. The ride recently received new trains, much like Viper (Six Flags Magic Mountain), and I have never ridden the original trains. I wonder if that altered the experience. 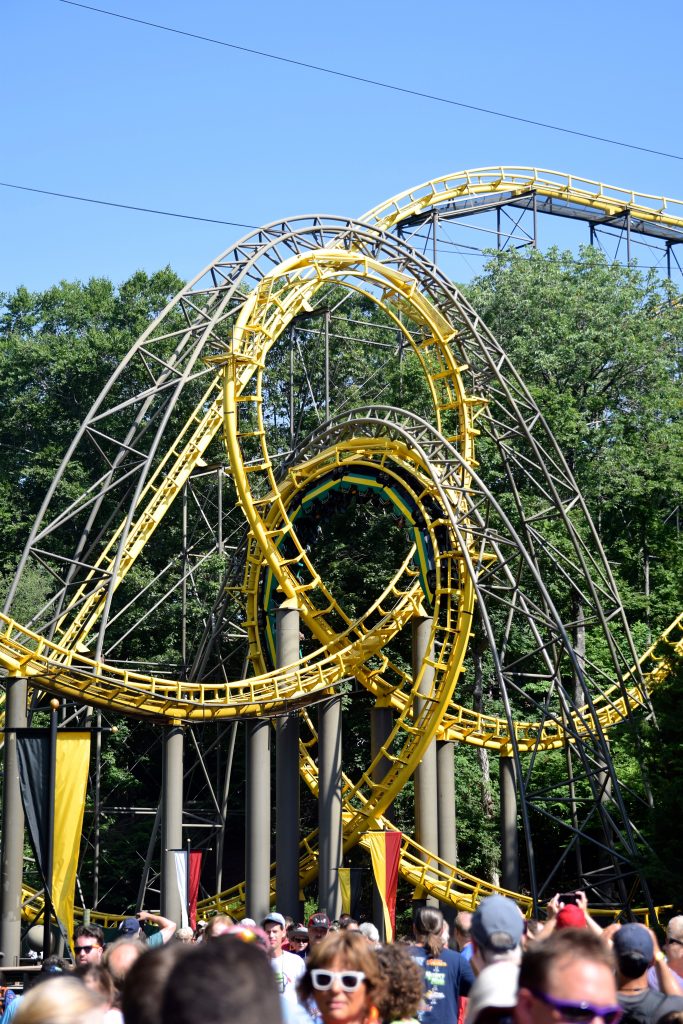 The ride features a giant trim brake on the way down the second drop into the first loop, which I am sure is there for valid reasons and reduction of stress, but after that the ride just kinda runs out of steam and feels more like a minetrain with a long tunneled helix. Having said that, I do love mine trains, thus it was a fun ride. Just not the intense amazing Arrow looper I was hoping it would be. 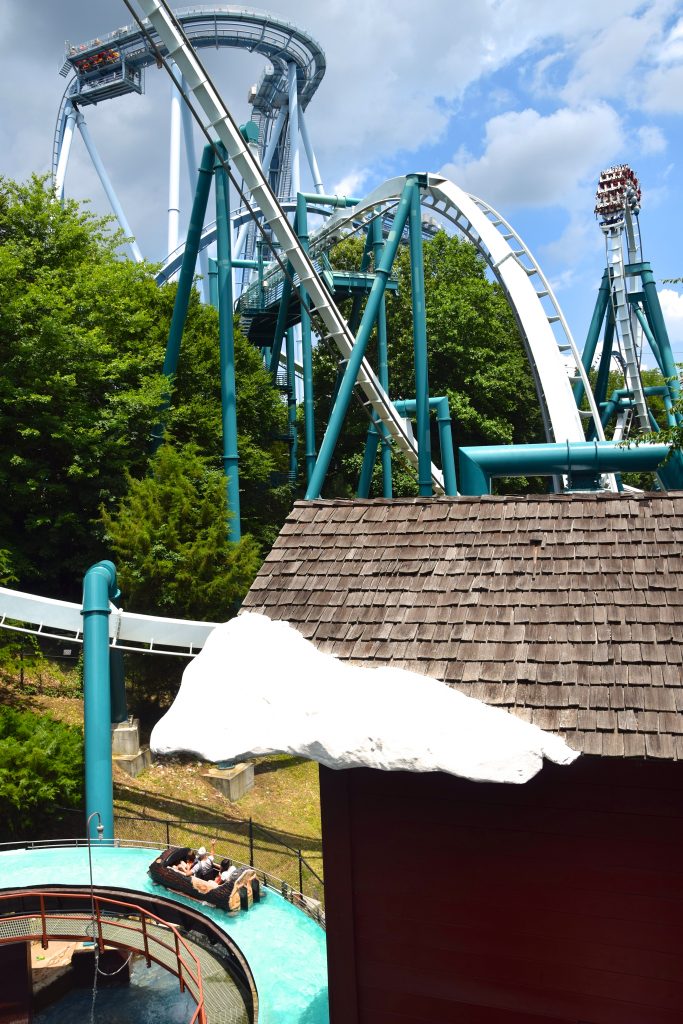 Luckily the park is home to Alpengeist, one of my favorite (if not my favorite) B&M Inverted coasters in the United States. This coaster packs a punch and has amazing design integrity using the hilly terrain and riverbed below quite nicely. 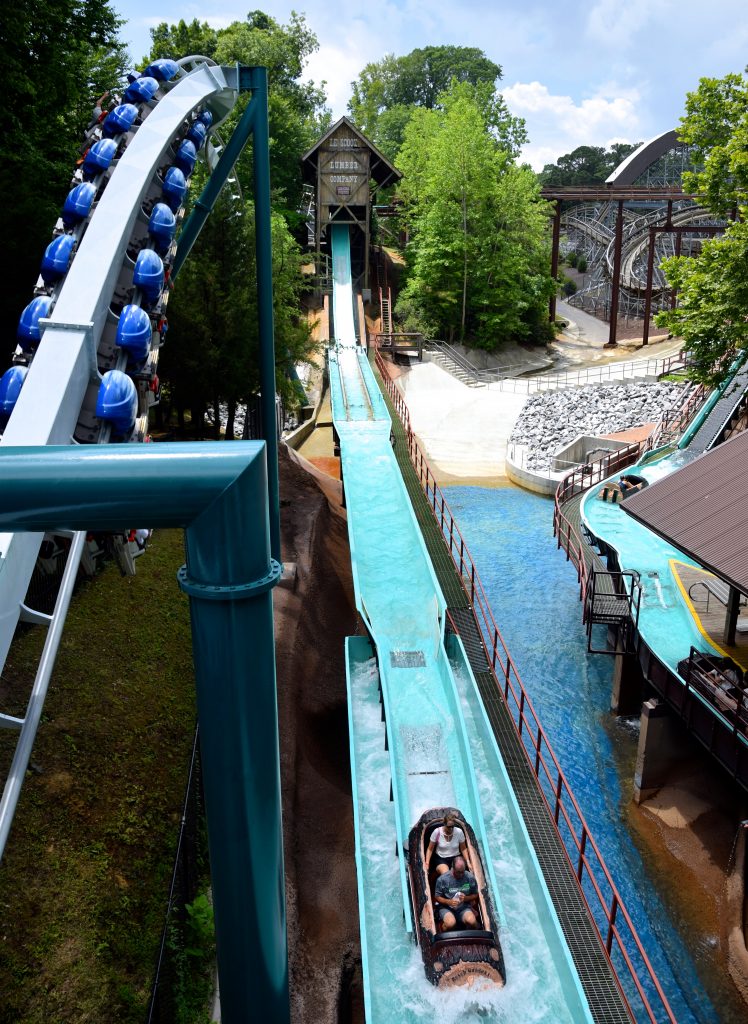 The second half of Alpengeist is a lot less intense, and kind of makes it ways through the artificial snowy landscape featuring a full upward helix, zero-G-roll and corkscrew. The first half is so massive and intense that the mellower second half is very much appreciated. Right next to it hidden in the back corner is InvadR, the park’s ugliest coaster. It was a nice use of space and a cute little addition. The ride has some good forces and makes for a perfect family coaster. It is though, by no means, in the top of this park’s amazing coaster collection. 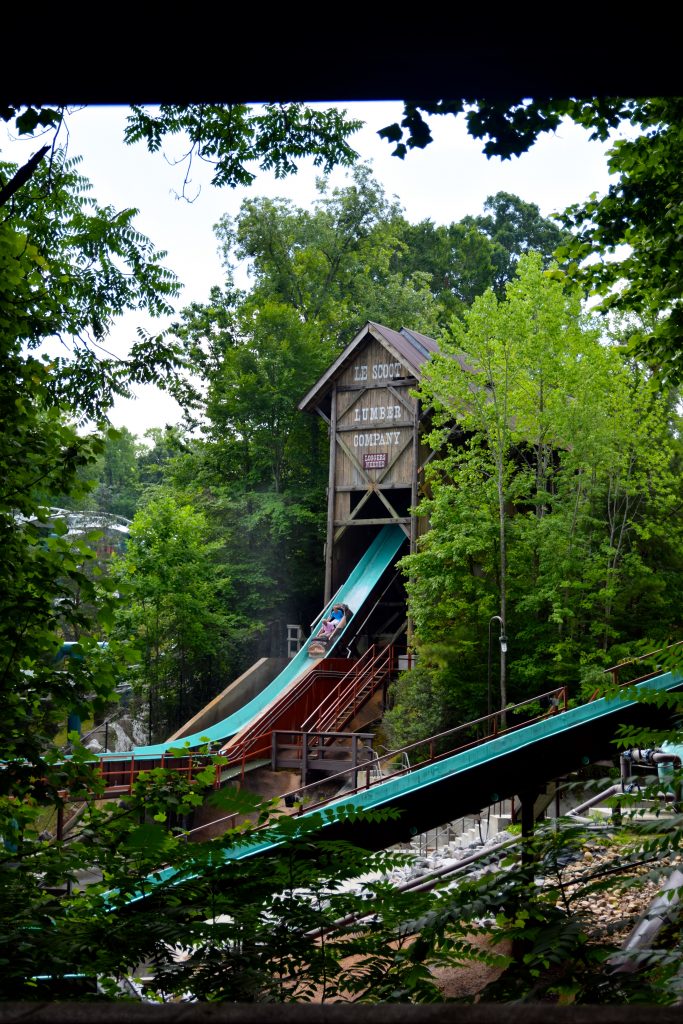 Wedged in between is the park’s original water ride, Le Scoot. This rather short but impressive log ride offers a great view of Alpengeist and InvadR! The ride features both a Hydroflume-like speed drop as well a large drop as the ride’s finale. 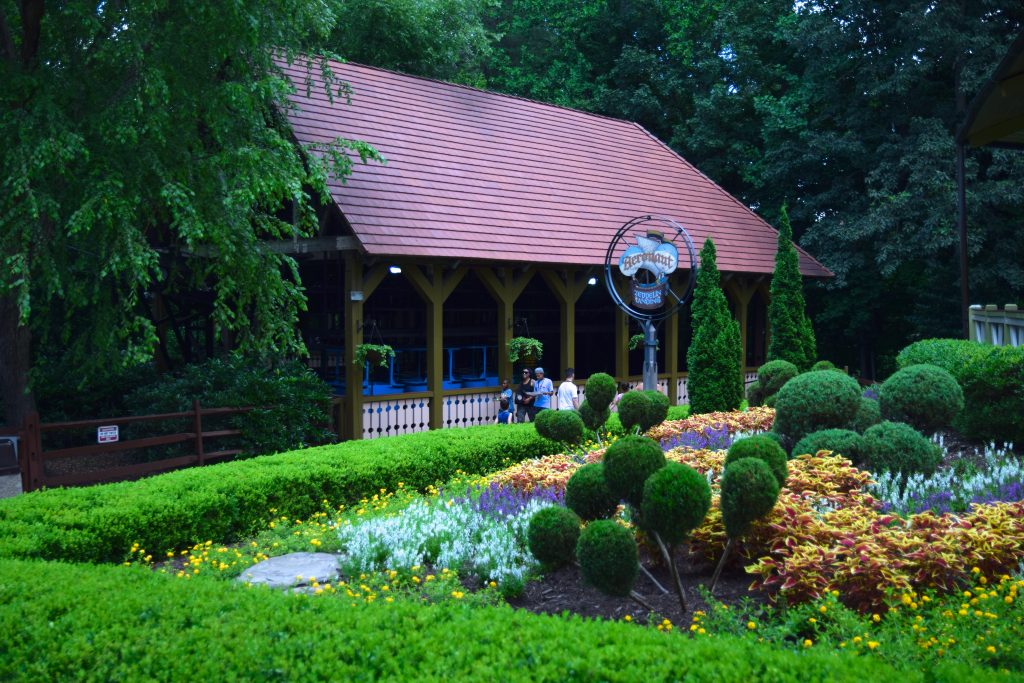 Next up! The park’s unique one direction Von Roll skyride! There are three stations around the park and the skyride cars travel between all 3 stations in one direction. The only downside is having to wait in line for every leg. Having said that, its a perfect mode of transportation. 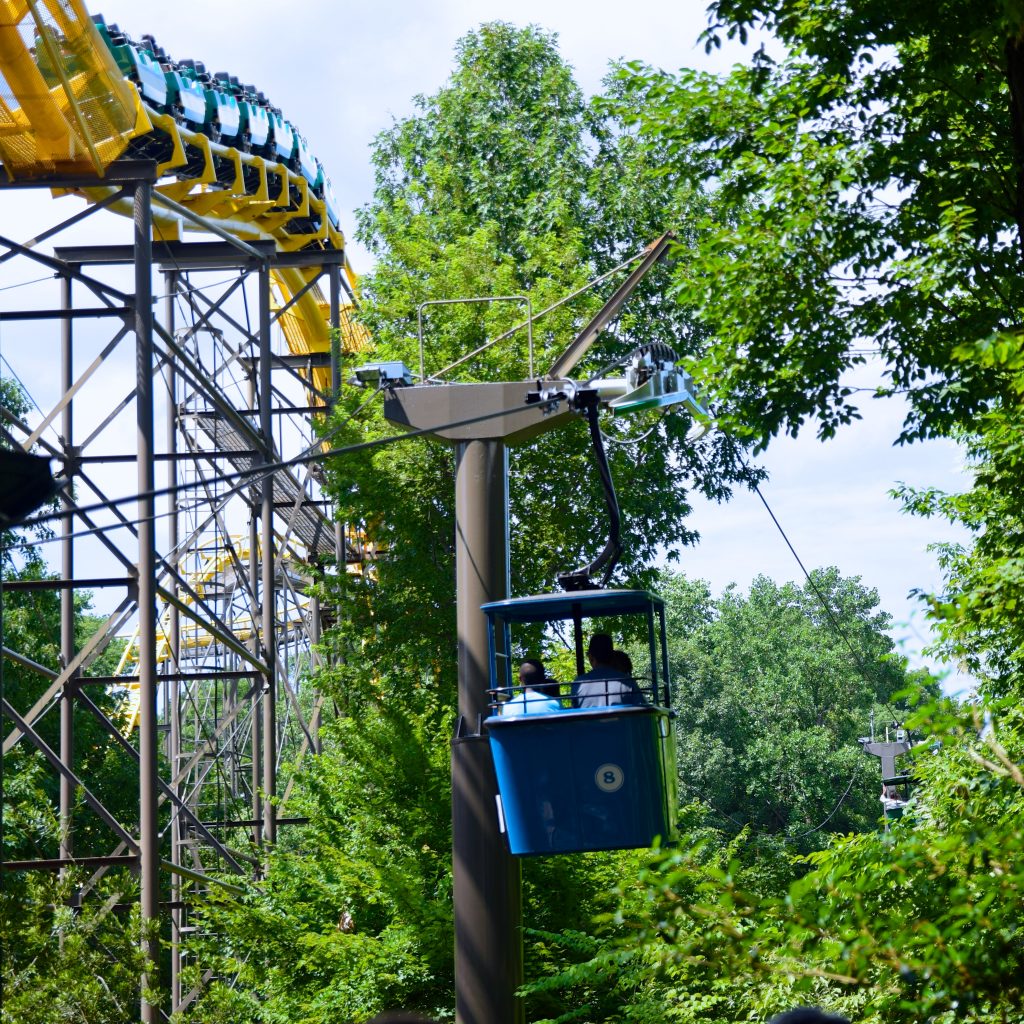 The ride great for some lovely views of the park’s major attractions, like Loch Ness Monster! 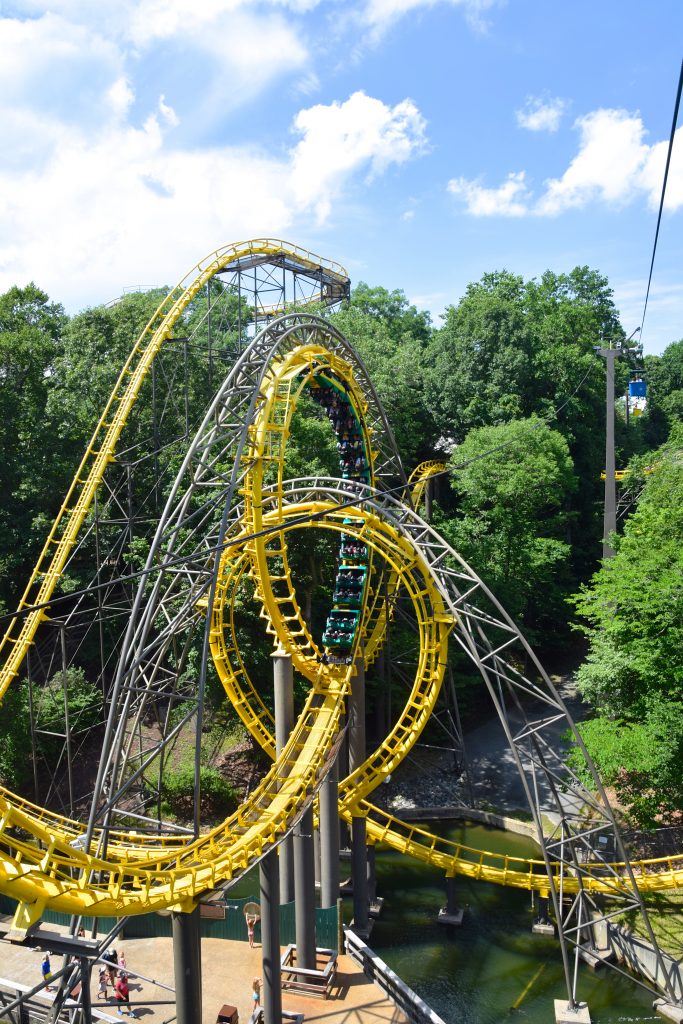 Which is the best looking mine trai… err Looping coaster in the region! 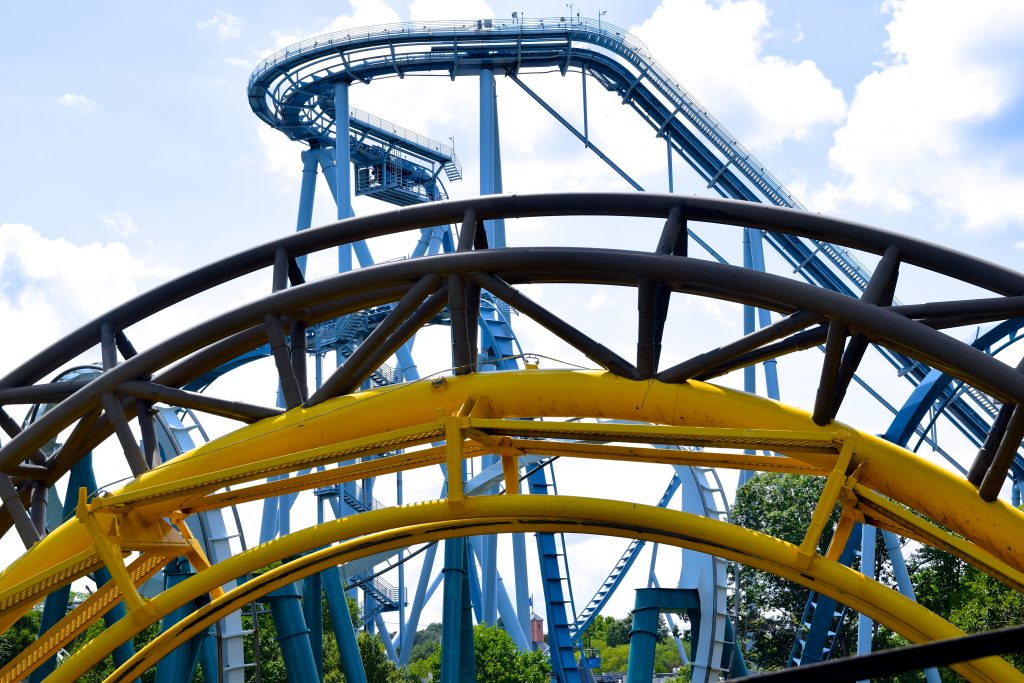 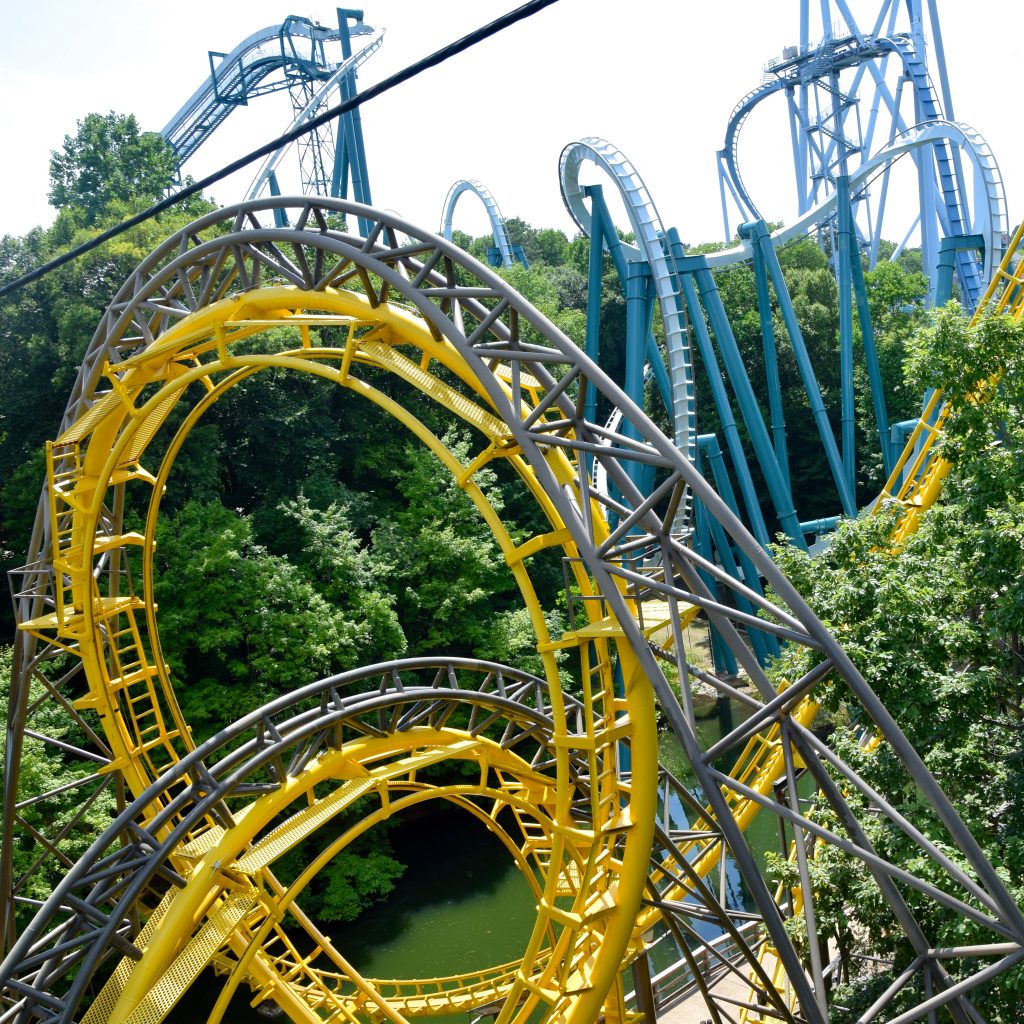 And there is Alpengeist! Which doesn’t reach its lowest and fastest point on the ride ’til the start of the Cobra Roll, which is the most intense element on the ride. Absolutely out-of-this world good. 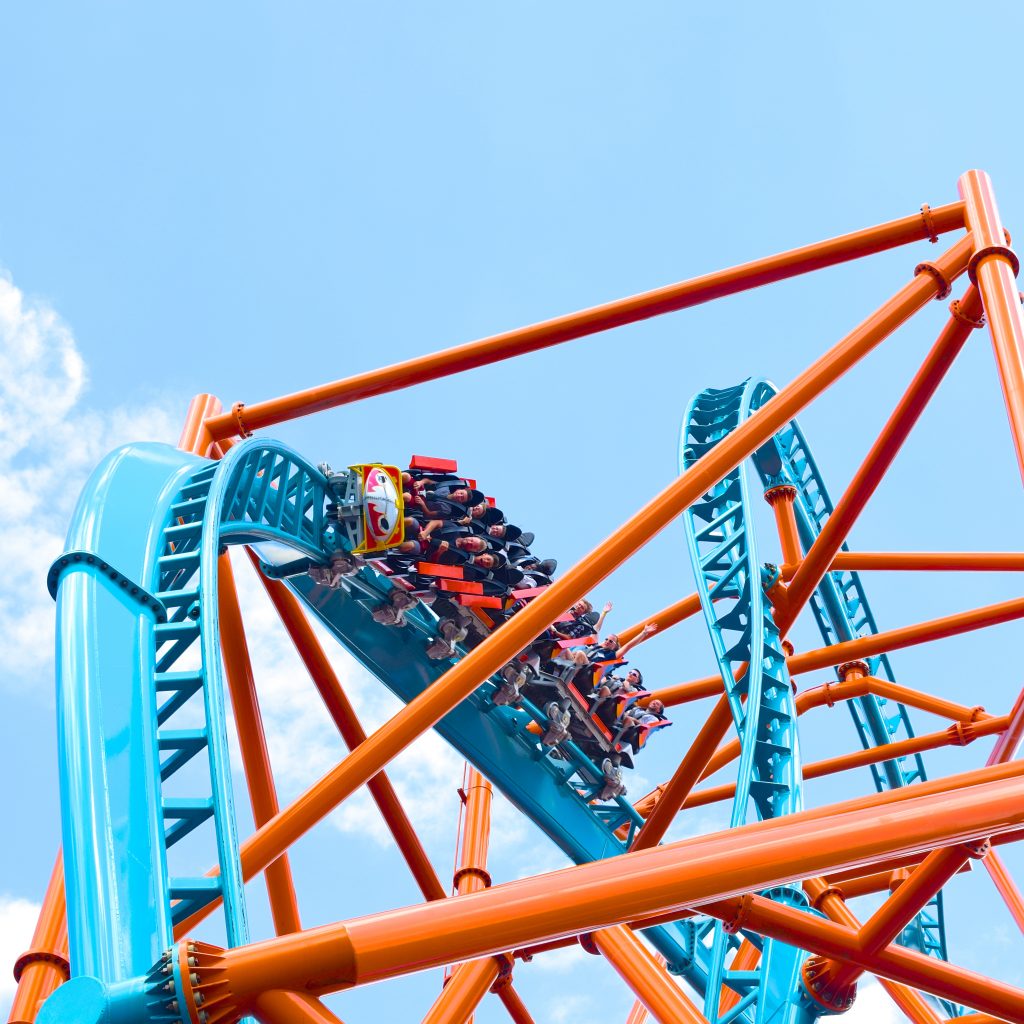 An area we haven’t touched on yet is Italy and Fiesta Italia, which is home to Apollo’s Chariot and Tempesto. Though Tempesto does not stand out in the park’s lineup at all, and feels weak compared to the other massive coasters in the park, it does add amazing color and flare to the Fiesta Italia area. The integration of the ride between the Apollo’s Chariot supports and the midways is beautiful and the theme is appropriate. The ride is alright, much like Electric Eel at SeaWorld San Diego, the fit in the area is perfect.

More Skyride shananigns on our way to whatever we were riding (honestly can not recall). This picture gives a good idea of how stunning the park is though! 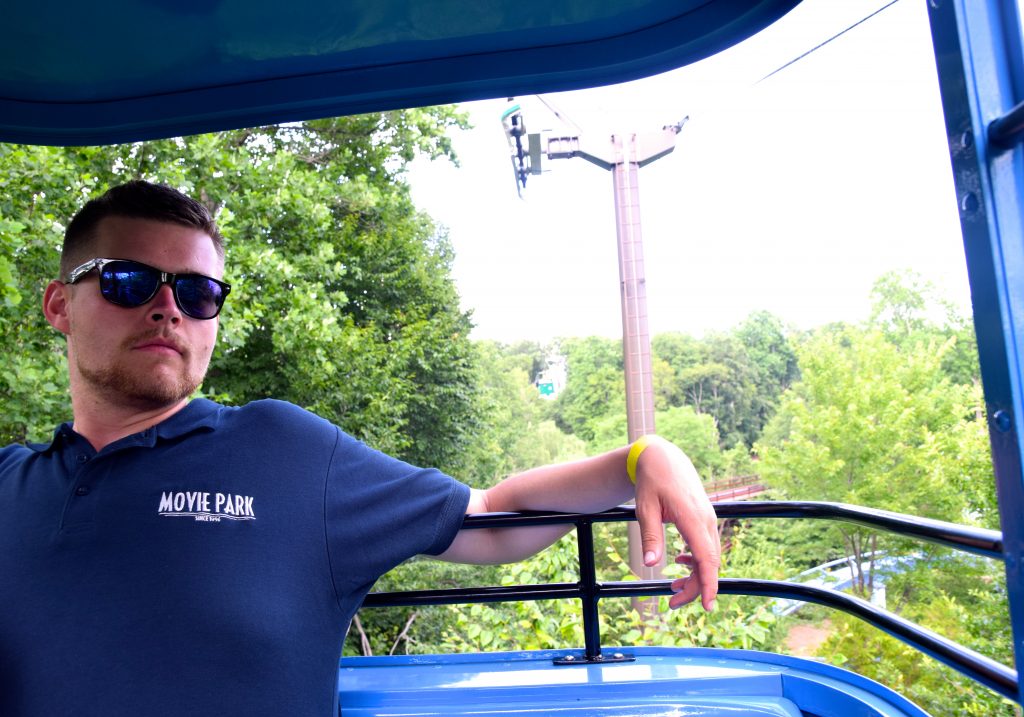 As this park is themed to Europe, and was appropriately called Busch Gardens Europe from 2006 through 2008, we wore our Movie Park Germany gear, which was my home park when I was younger and lived close to the German movie themed theme park. 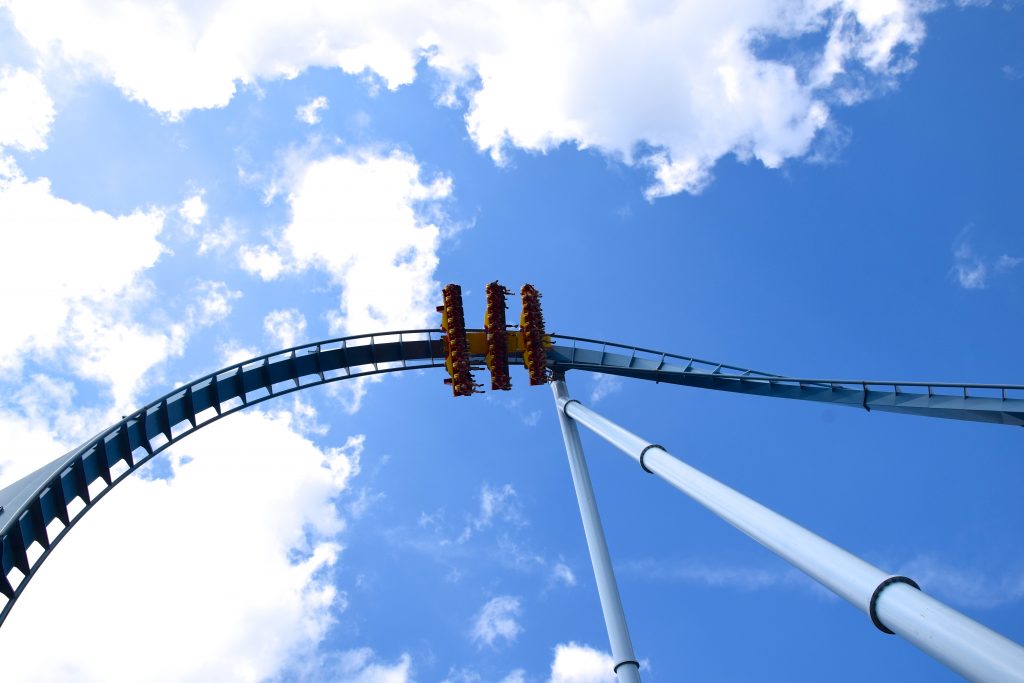 Griffon is a massive coaster and is located in the center of the park, due to its location in the skies of France (section of the park), the ride has a light blue color scheme to match the skies, this way this giant B&M Dive Machine feels a lot less invasive. The bright red and yellow trains make a great appearance in the sky. 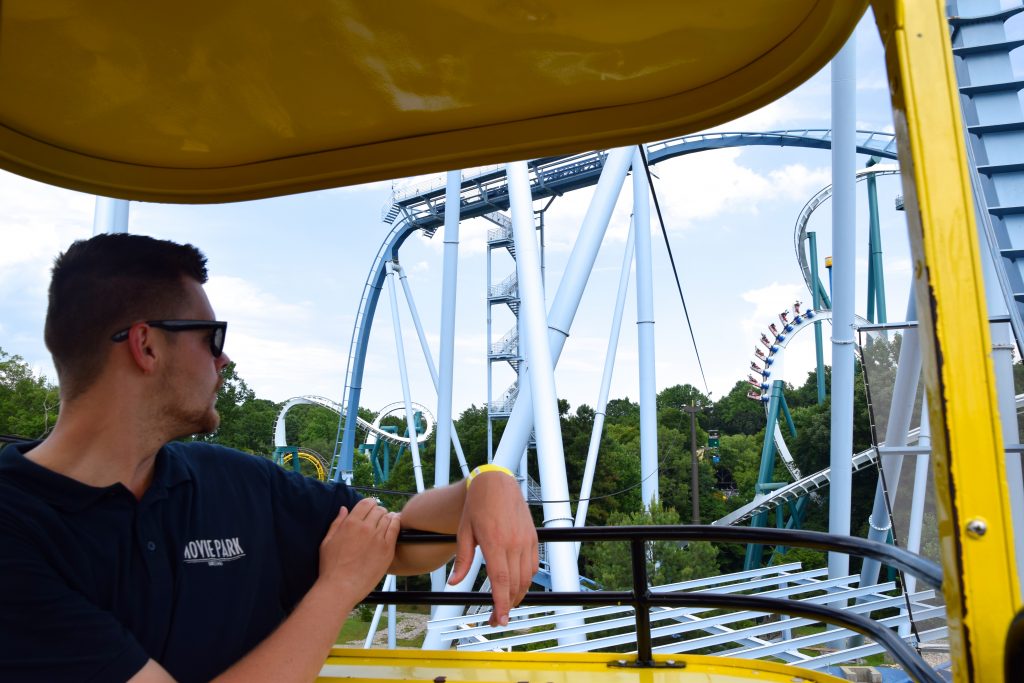 Oh look! Alpengeist beating people up with its intensity! Look at the height of the first drop and then the height of the Cobra Roll, which is only the 3rd element after the drop, it just rushes through the layout so fast. Definitely a very impressive Invert. 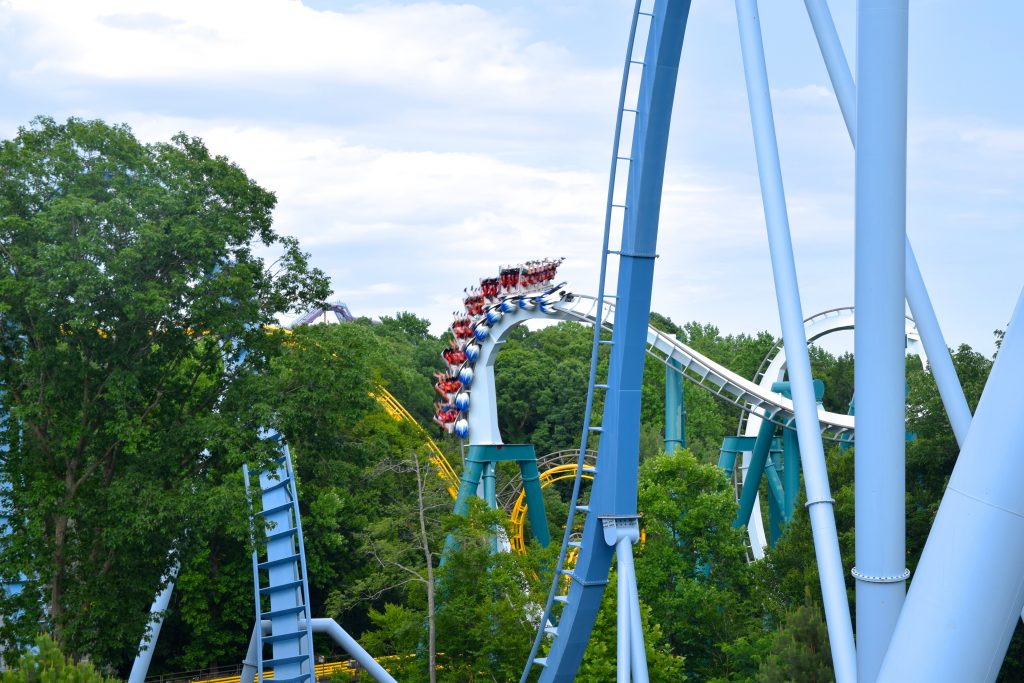 Here’s our detailed picture of… Apollo’s Chariot! If you’re confused, look behind the trees and in the distance! This B&M hyper coaster was one of the first of its kind and much like the two-years-older Alpengeist is designed for the terrain. The terrain-inspired layouts of both these coasters really make for great ride experiences. Apollo’s Chariot runs along the river through the forest and up and down the hilly terrain, which really made for the most unique B&M Hyper I have ever ridden. 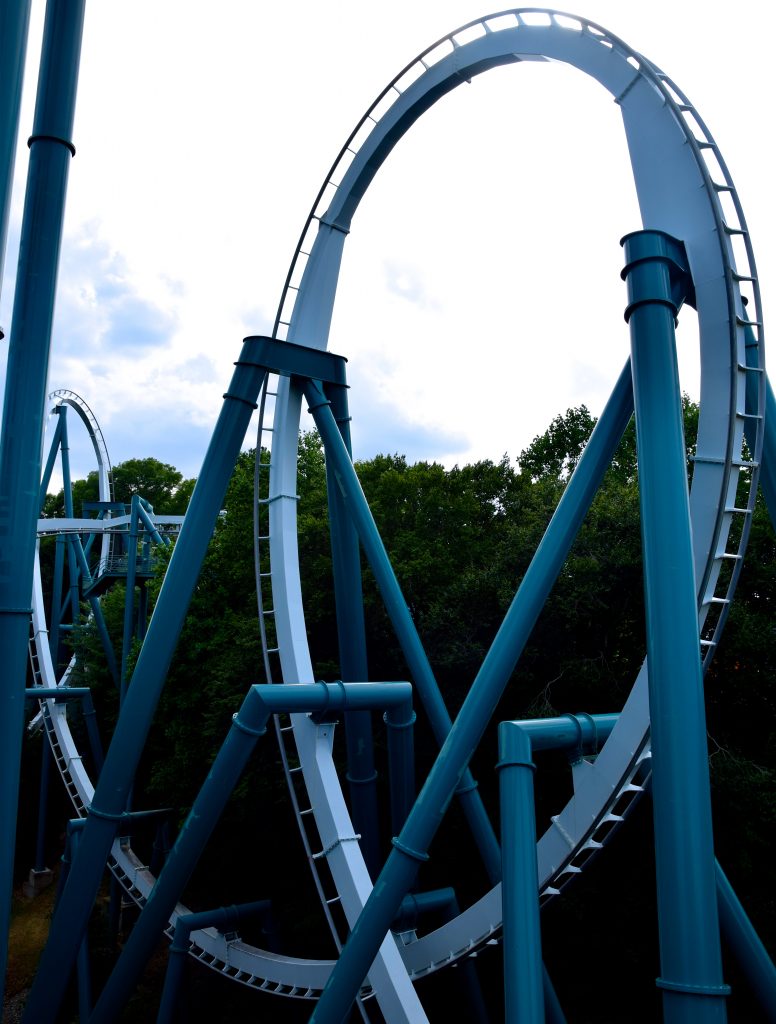 This was a bit of a shorter update, but let’s finish with Alpengeist, because it was certainly the ride that left the biggest impression on me. Busch Gardens Williamsburg is full of stellar world-class coasters, such as Apollo’s Chariot, Griffon, Verbolten and Loch Ness Monster, but the most intense is Alpengeist by far.

Thank you for checking out this Busch Gardens Williamsburg report! Check out our Busch Gardens Tampa report! We were at the park for Coaster Con, make sure to check out our Kings Dominion and Six Flags America reports!