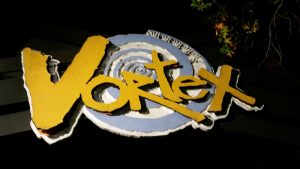 Several California Coaster Kings team members from throughout the state visited California’s Great America on Labor Day to take the Last Stand on Vortex. Vortex was the park’s Stand-Up coaster that operated for 25 years ’til it took its final riders on board September fifth. The ride will reopen next year as a Floorless Coaster named Patriot. Let’s take a look at Vortex and its last day of operations. 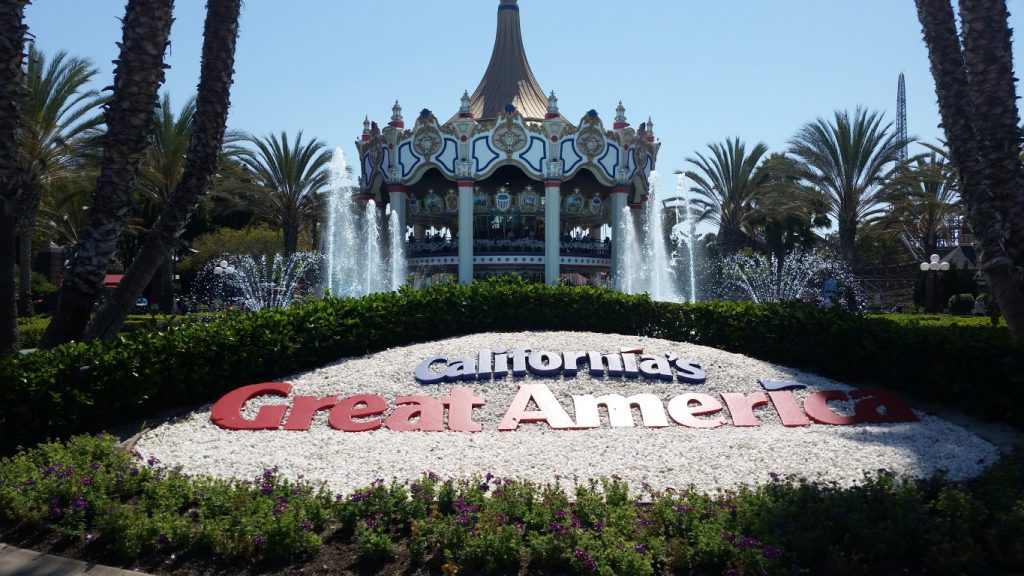 The Good and the Bad of VORTEX.

Vortex was a very small B&M Stand-Up Coaster that was the second ever B&M to be built. Though most rides of this manufacturer are usually incredibly smooth, there were several rough transitions on the ride. Let’s discuss what we will miss, and what we won’t miss…

We’ll miss the drop. Unlike most curved B&M Drops, the drop on Vortex made a slight 90 degree turn and then finished off going straight. The drop is super small and was actually very enjoyable. Undoubtedly the drop will be fun when riding the Floorless Patriot trains too. 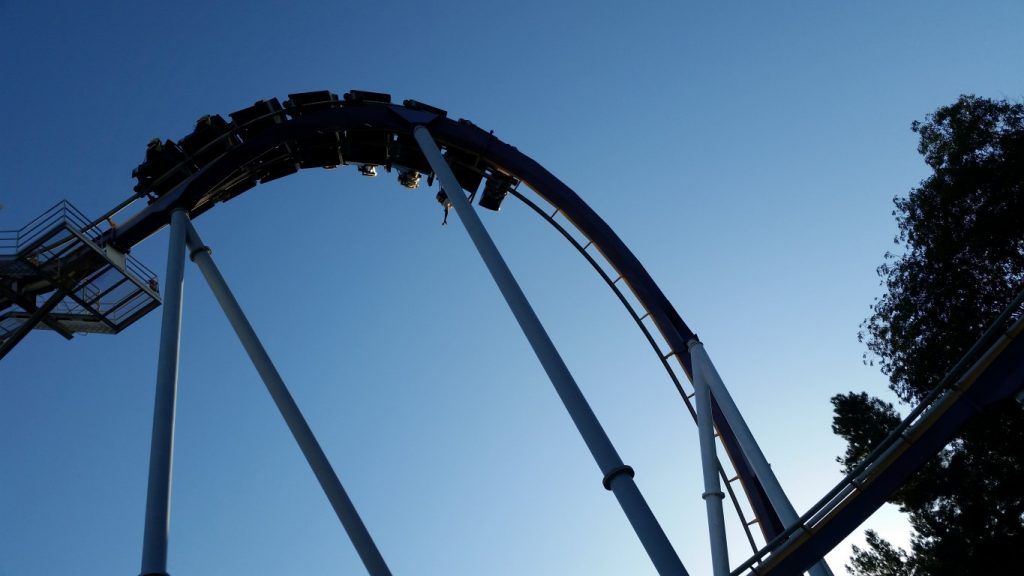 The Loop is a hit-or-miss element. When you caught the ride on a smooth day it was perfectly fine and again noticeably small. Making it a unique loop. Though on a rough day this little loop could rattle the train all over the place. The size of the loop will make Patriot unique as a Floorless coaster, as most Floorless coasters feature giant inversions, like Medusa across the Bay. 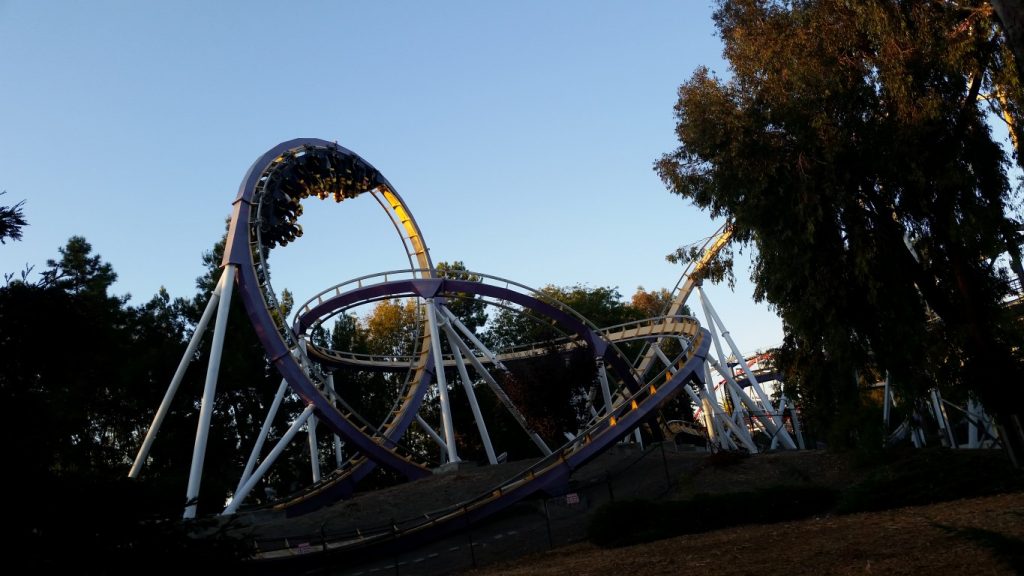 The following turn that’s elevated has very odd banking and slammed your head into the restraints, we doubt that this will be fixed and will likely remain to be a rough spot on Patriot too. The next helix through the loop has always been a personal favorite though. The pacing is not all that bad, and it feeds into the pure compactness of this ride. 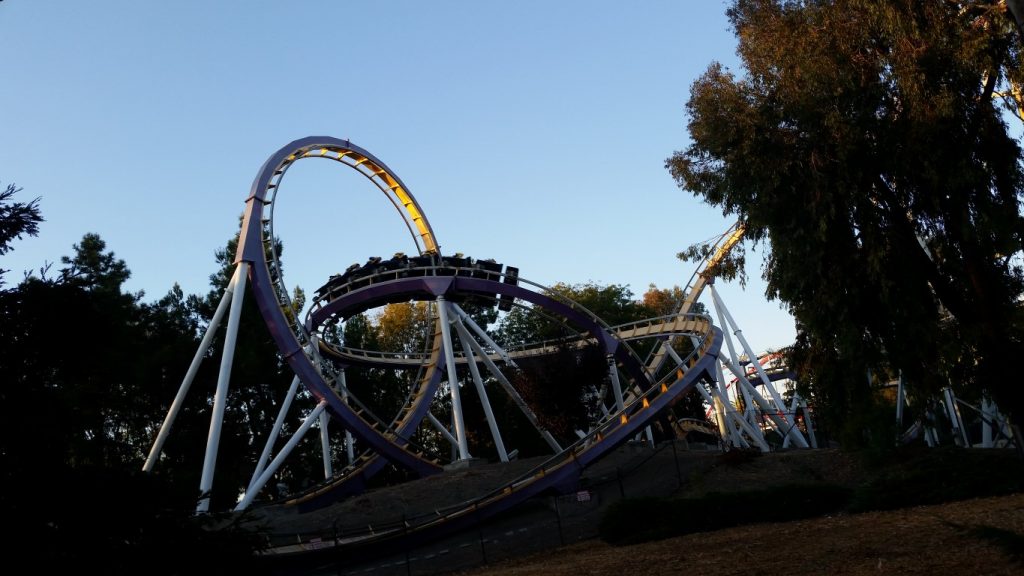 The turn following the helix is a tiny drop in a way. The train quickly turned right at ground level and then descended towards the Corkscrew. This turn was butter-smooth and will be particularly fun for riders in the front row of the Patriot Floorless trains! 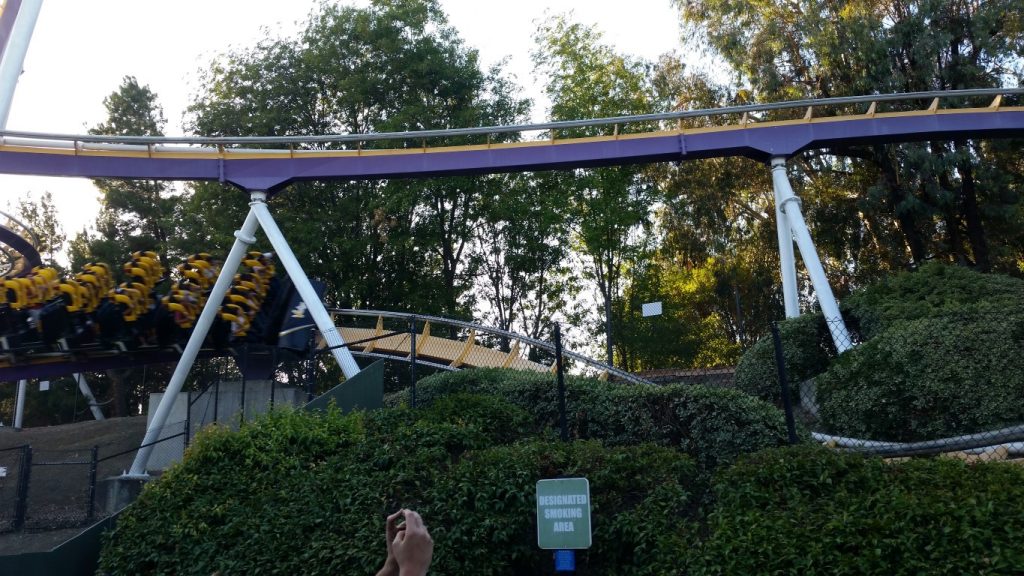 The Corkscrew itself is a typical old-school B&M corkscrew similar to that on their old Inverted Coasters. It quickly rushes through with a noticeable snappy drag into the second half of the inversion. Once Vortex started to age it became a bit of a rough head-bang transition. Nonetheless it was one of the better corkscrews out there, because of the intensity. With brand new trains this should remain to be one of the highlights of the ride. 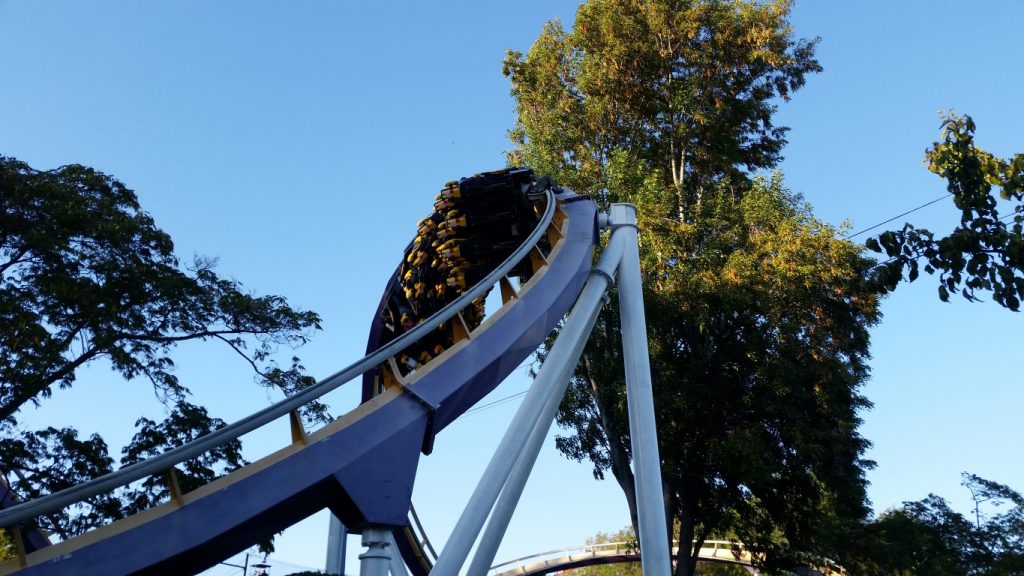 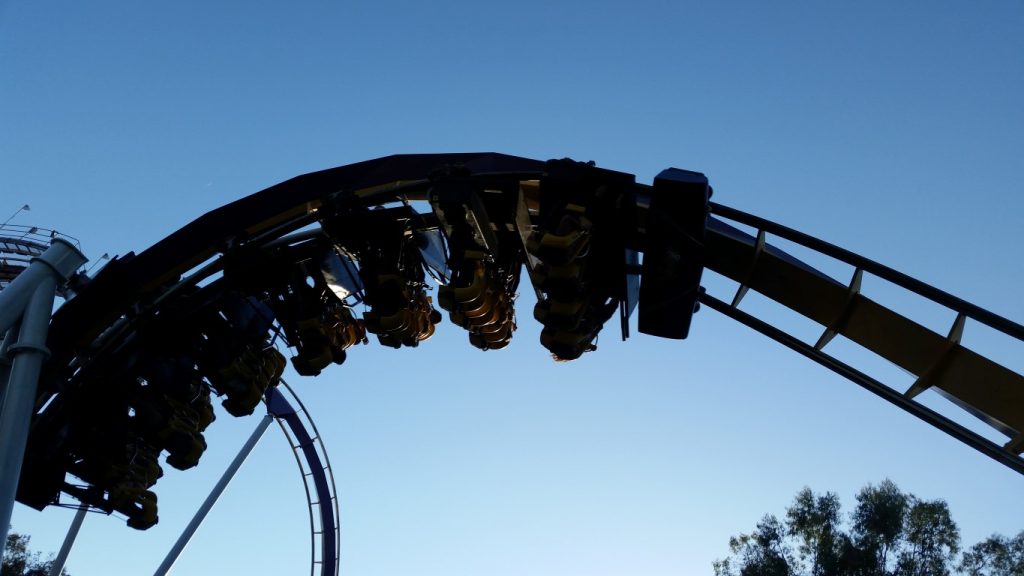 The turn following the Corkscrew was a bit unpleasant too. With the odd banking the laterals on top of the turn smacked your face back into the restraints. This is one of those turns that will still be unpleasant when it reopens as Patriot, I’m afraid. 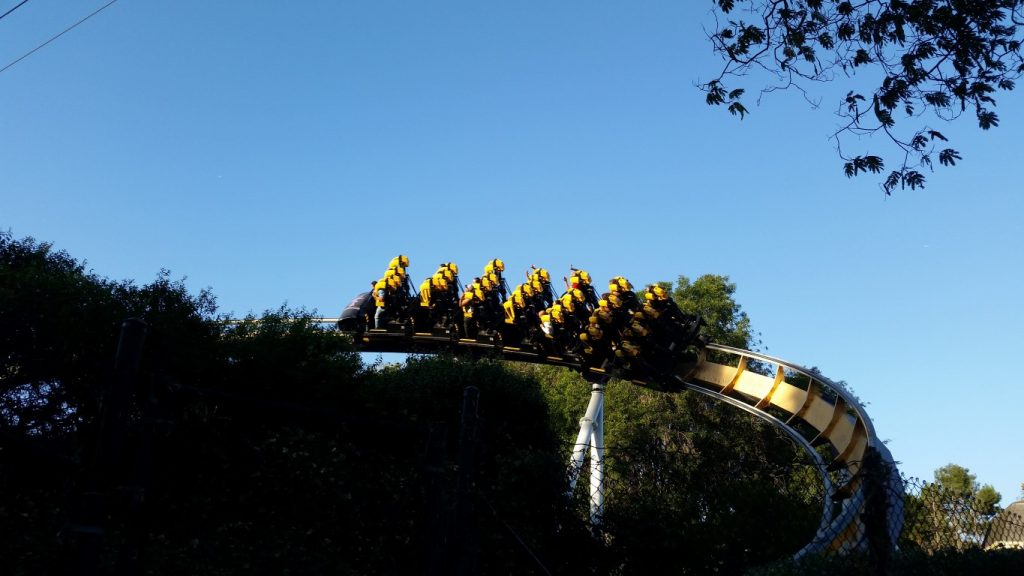 Last but not least, is the hill leading into the unbanked-and-unelevated straight section leading to the brake-run. There was a tiny pop of air, but most noticeably, it was the only upwards section on the ride that’s not banked or an inversion. It also immediately marked the end of the short ride. The effect of this hill will likely not be affected much by the conversion. If anything, it may just make the pop of airtime more noticeable. 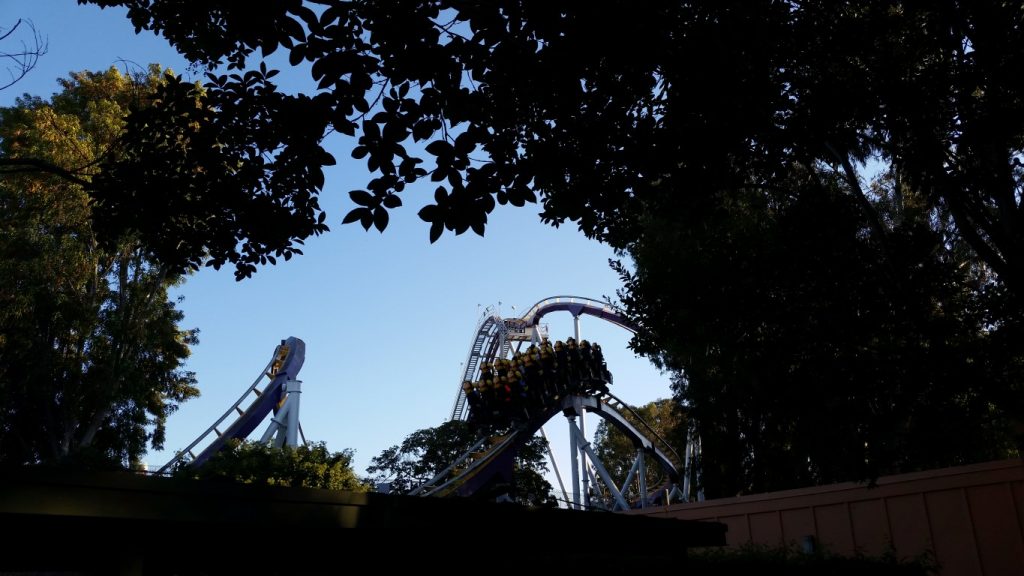 Overall, Vortex wasn’t all that bad of a ride. It was just incredibly short and being one of the oldest B&M coasters out there, it lacked some of the smoothness we’re used to when riding B&M Coasters. There’s no denying that the ride is almost too small to convert, but with the tight space in which it’s located, it may just be the park’s best shot. Will Patriot be a star-attraction? Likely not. But it will bring a new experience to the park, and its crazy tiny size will make for a very unique Floorless coaster!

Along with Kris and Robert from the Legacy of Arrow documentary and a few readers, we waited to be the riders on the last public train of Vortex. 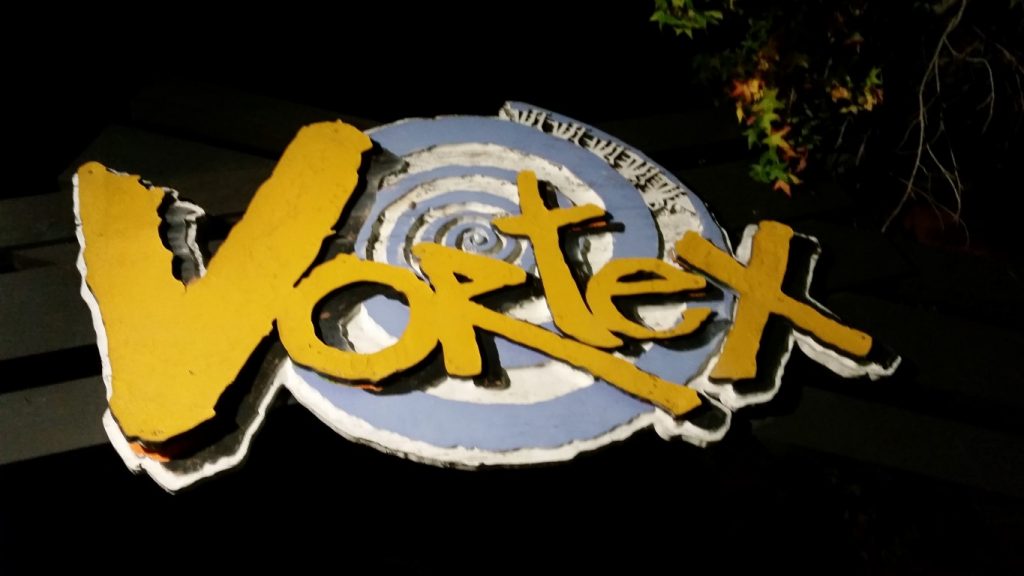 Besides a Social Media promotion the park ran, there weren’t many guests riding the classic Stand-Up Coaster during the day, and it remained a walk-on at night. Thus it wasn’t too much of a challenge to be the last riders. It was an interesting yells-filled ride as we all screamed Vortex to a close. Here’s the group photo that was taken afterwards: 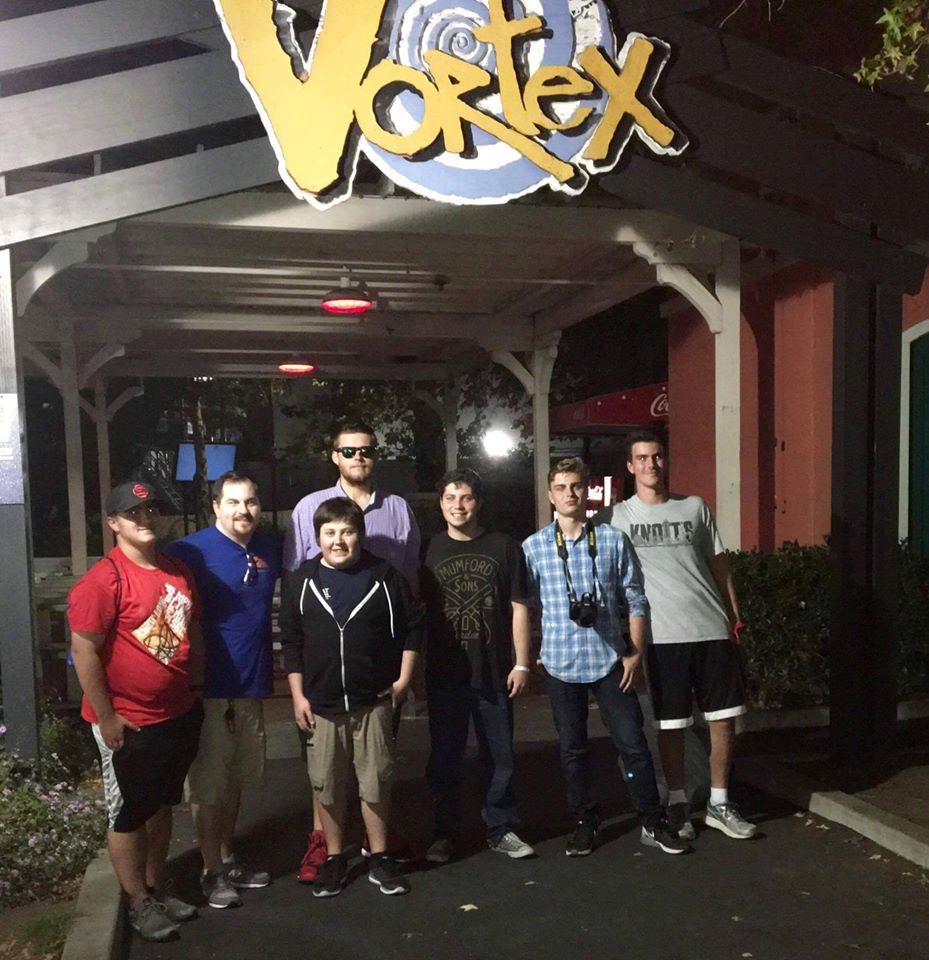 Thanks to our CCK Team members Byron (on the left) and Ryan (on the right) for joining me (Sean, in the center) on the last train of Vortex. We’ll miss the coaster, as we all liked the ride, and it was generally a walk-on. But we’re ready for lots of Patriot coverage and eventually a new experience at the park. 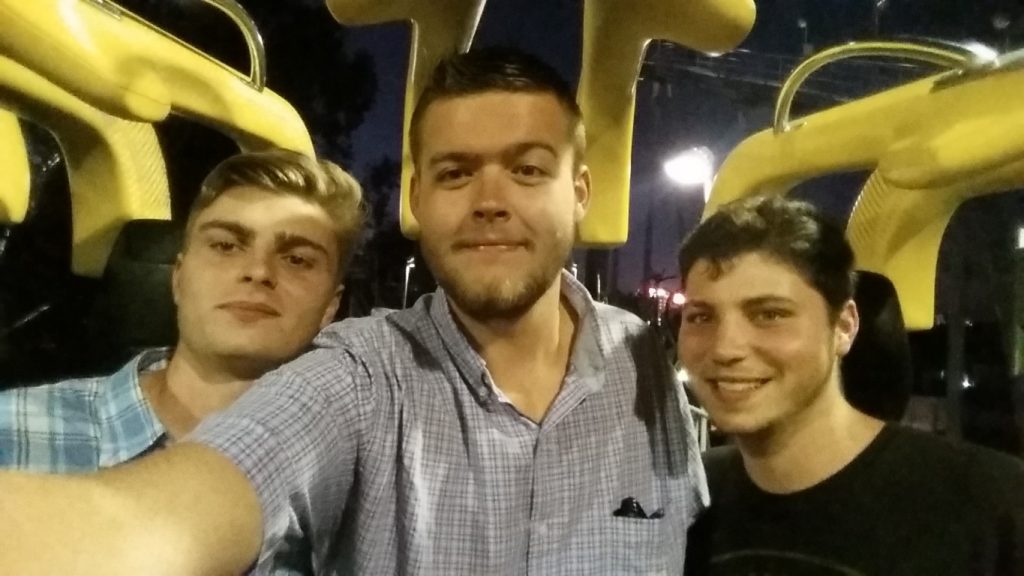 California’s Great America just today released that the work on Patriot has already started. Parts of the track have already been repainted. We were told by the park that the station and line for Patriot will remain roughly the same as it was for Vortex, which means that the station will likely still be outdoor. Let’s hope they at least add a roof. 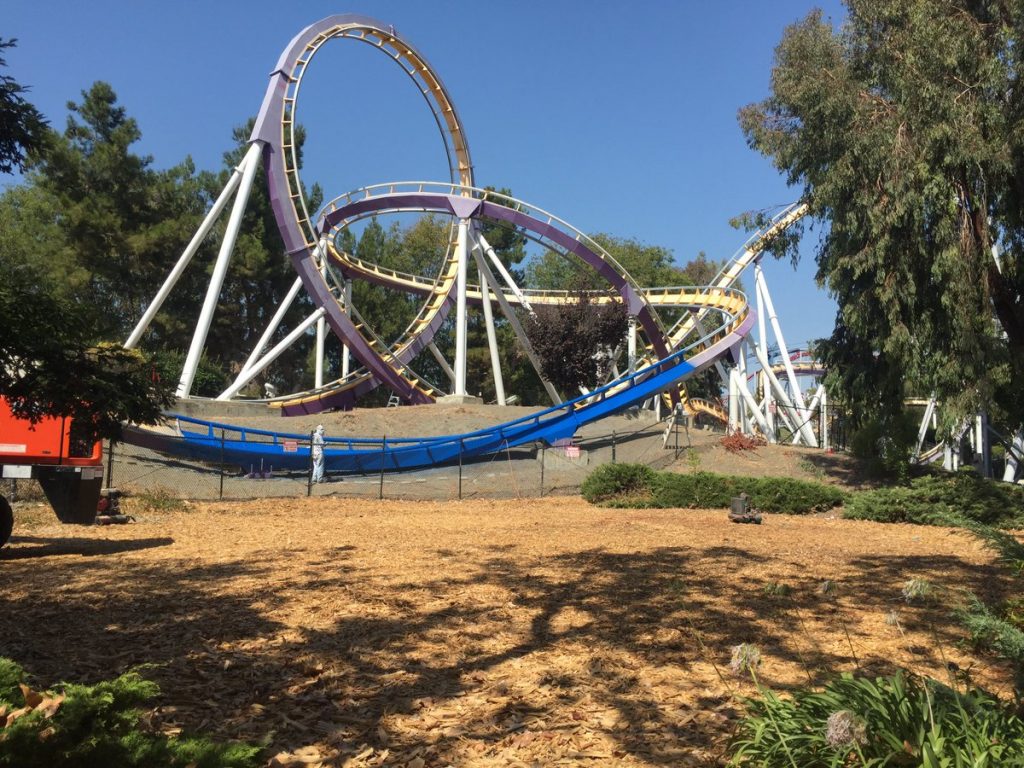 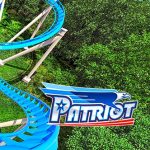 Read all about Patriot, the park’s newest addition and one of the World’s tiniest Floorless Coasters, here! All the information you’ll need, and a collection of our thoughts of the transformation can be found there.

We’ve got a ton of coverage coming up in the next few weeks with daily updates, articles, exclusive behind-the-scenes previews, Halloween Events, interactive posts and more! So visit back often! For now, check out our new Six Flags Magic Mountain Update and our new Six Flags Discovery Kingdom Update!

Thank you for reading! Leave a comment and make sure to follow us on our social media for exclusive coverage! Facebook–Twitter–Instagram

One Reply to “VORTEX: The Last Stand”