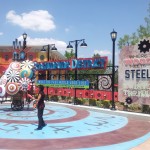 The park had this really cool spiel prepared, where the theme was explained, while the walls were still closed, and then with very cool custom steampunk-esque music, they opened the doors to the new area with lots of fog, balloons, etc. Really cool opening of the new area! 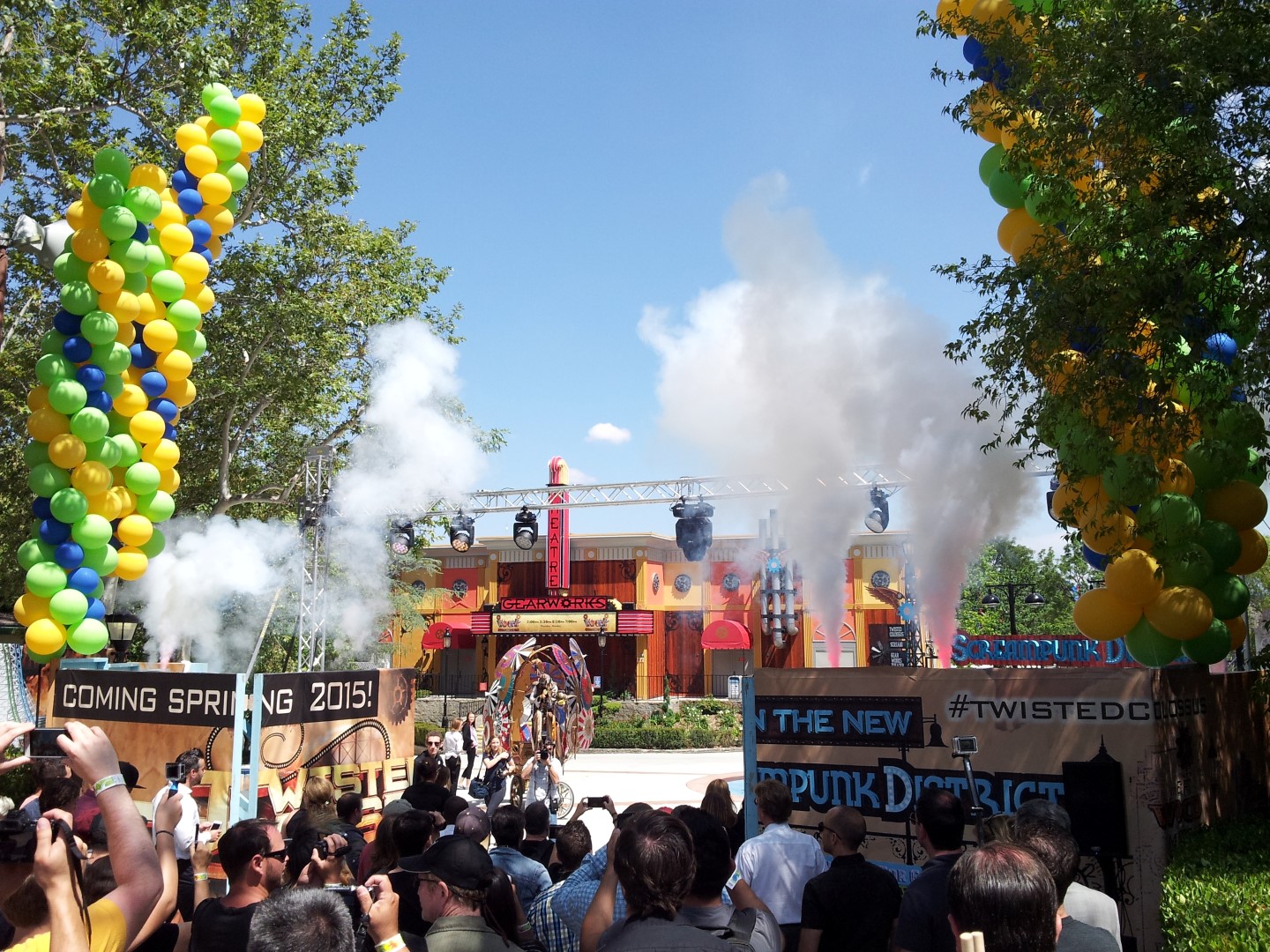 As we walked through, so did many others, but the new area looks absolutely phenomenal. 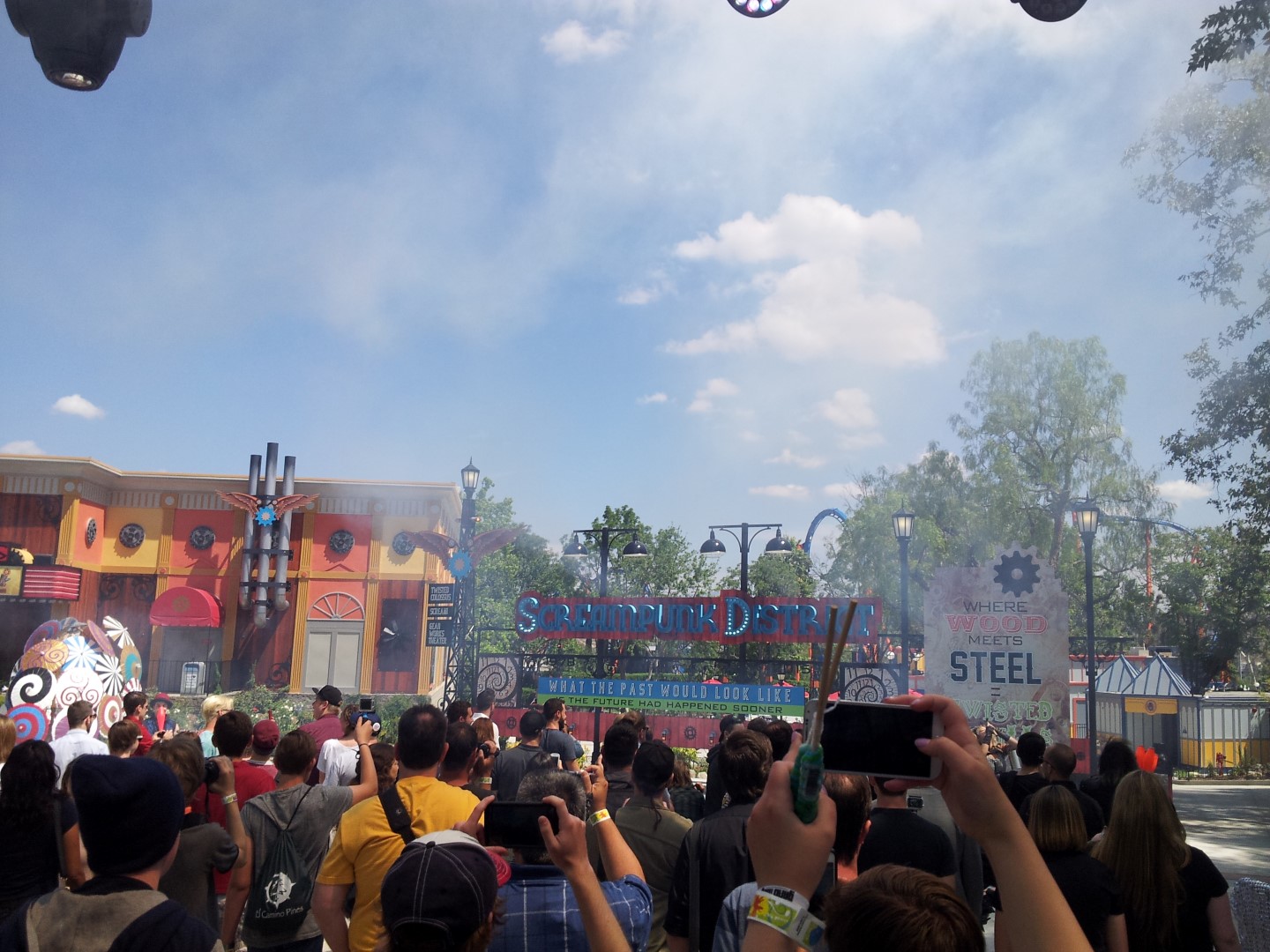 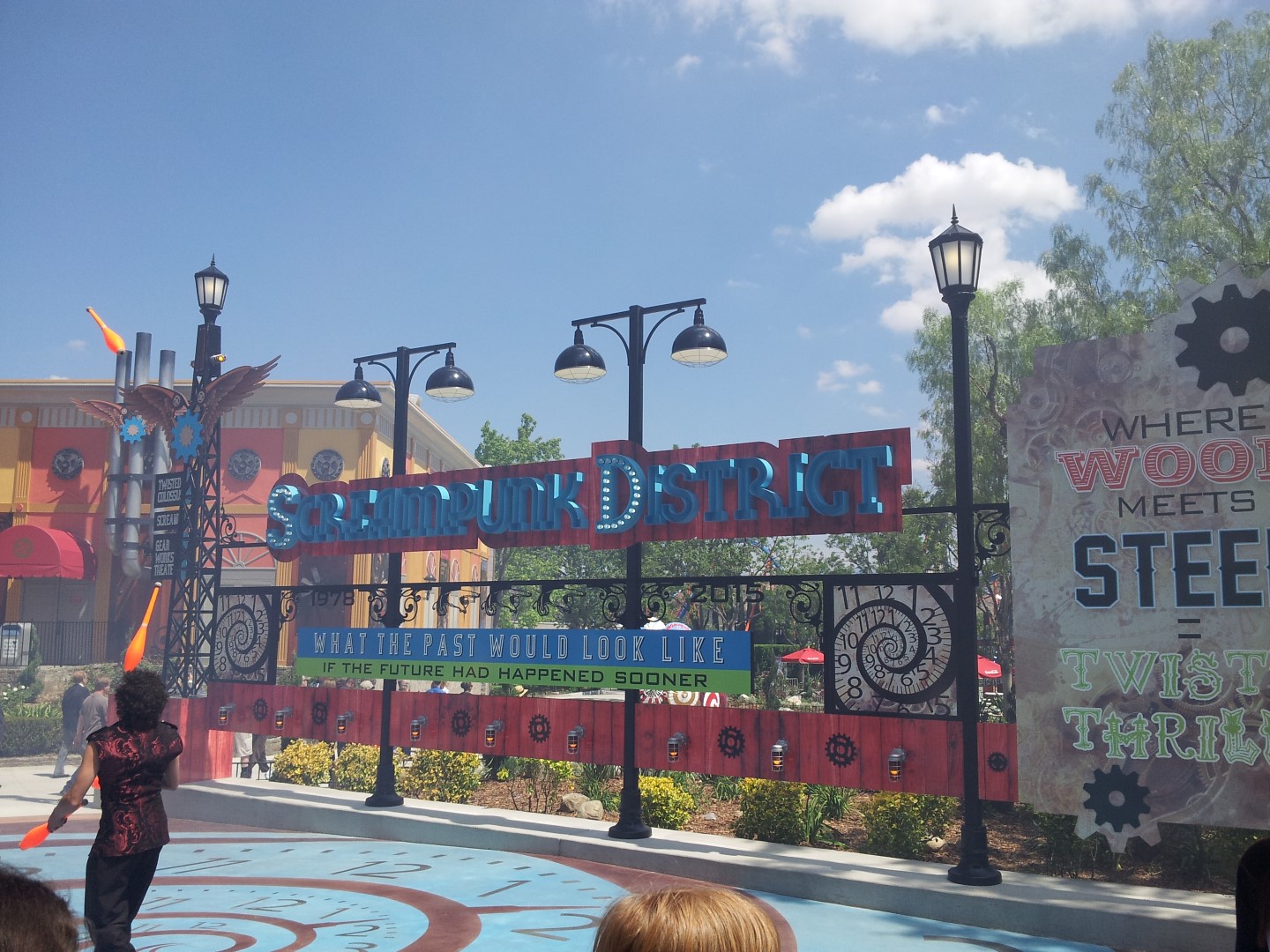 And that cool, weird (I guess steampunky) bike of umbrellas you see there… That was the character opening the brand new area. He lead everyone to the Twisted Colossus opening ceremony, which was next to the Zero G Roll on the parking lot side of the new ride. 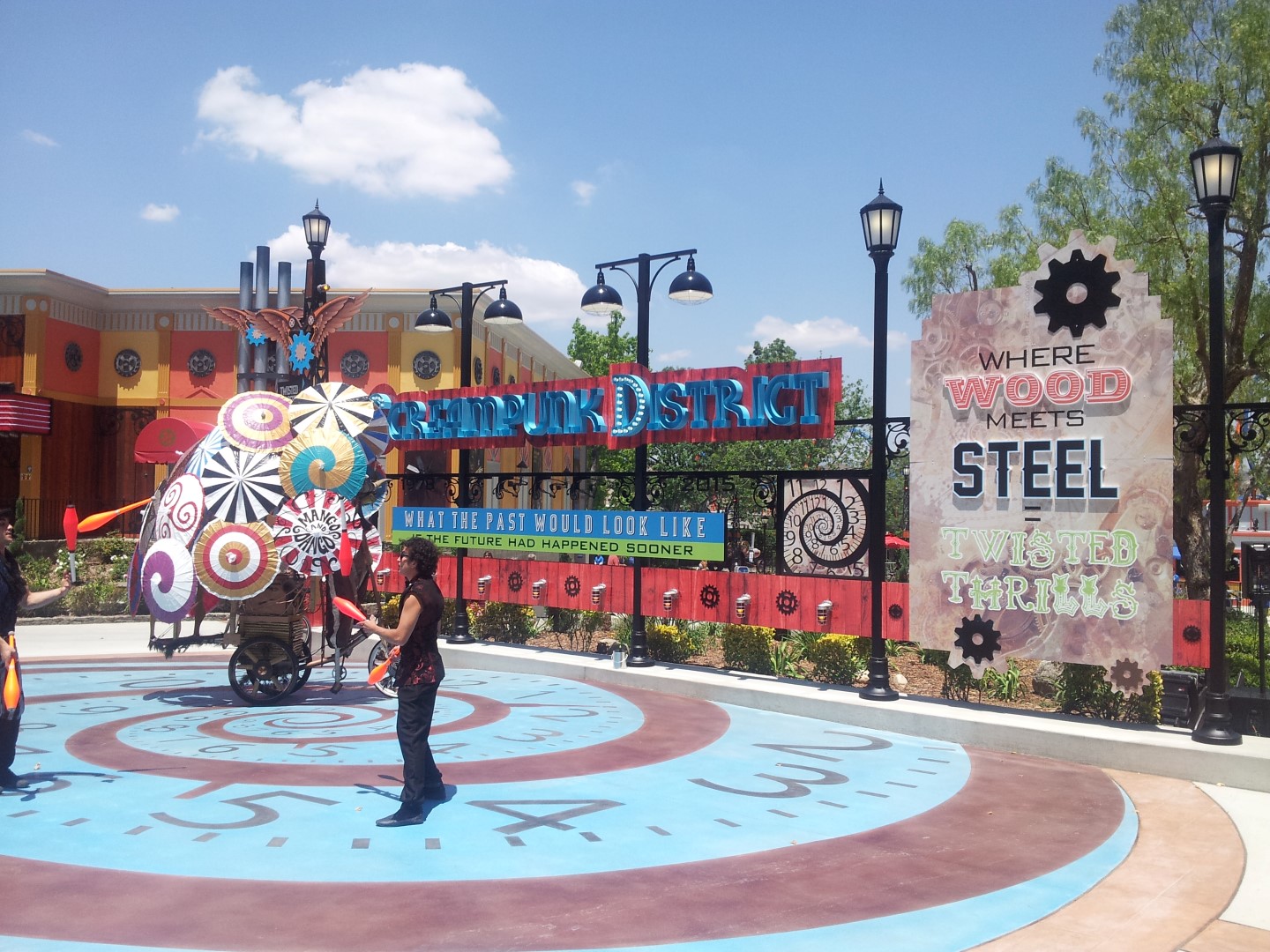 Look! This funky vehicle is awesome! 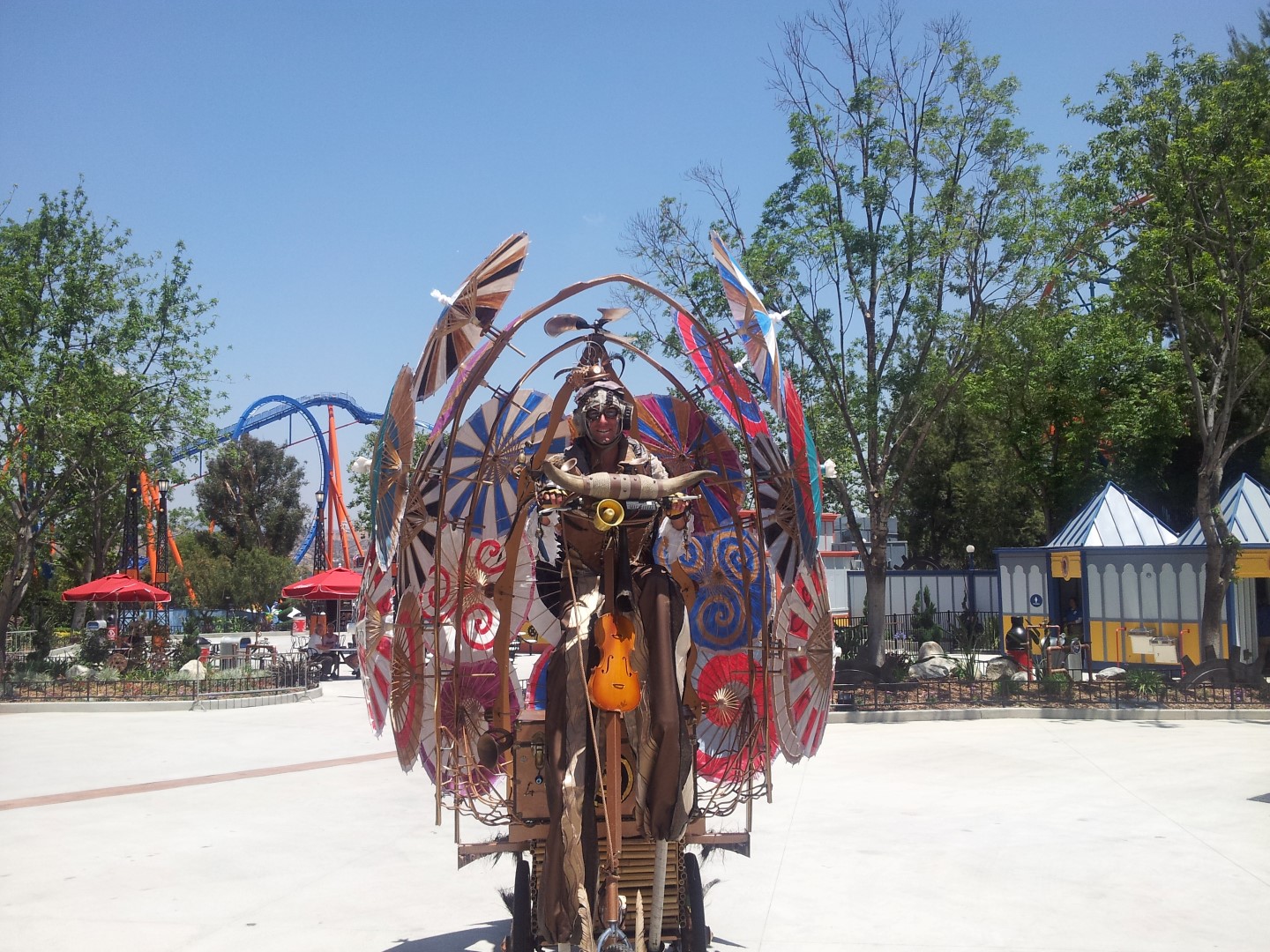 That funky vehicle brought us to the official first launch of Twisted Colossus. You know, that crazy amazing new coaster, the world’s longest Hybrid Coaster. First Bonnie Rabjohn, the Park President, gave a wonderful speech, in which she may or may not have called the first half of the ride the ‘Red’ side. 😛 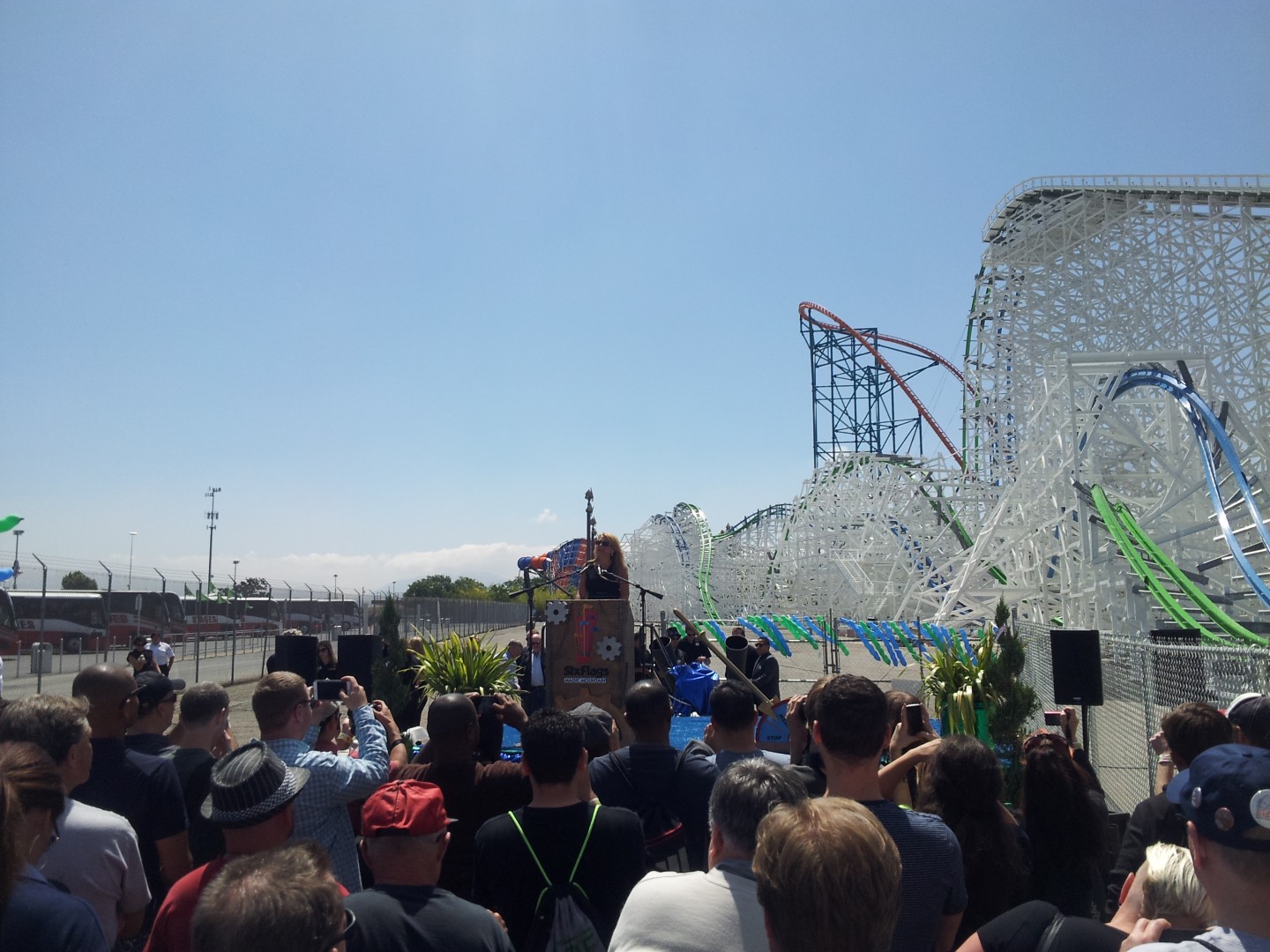 Then several construction workers of the original Colossus joined Bonnie and RMC executive as they launched the ride together. 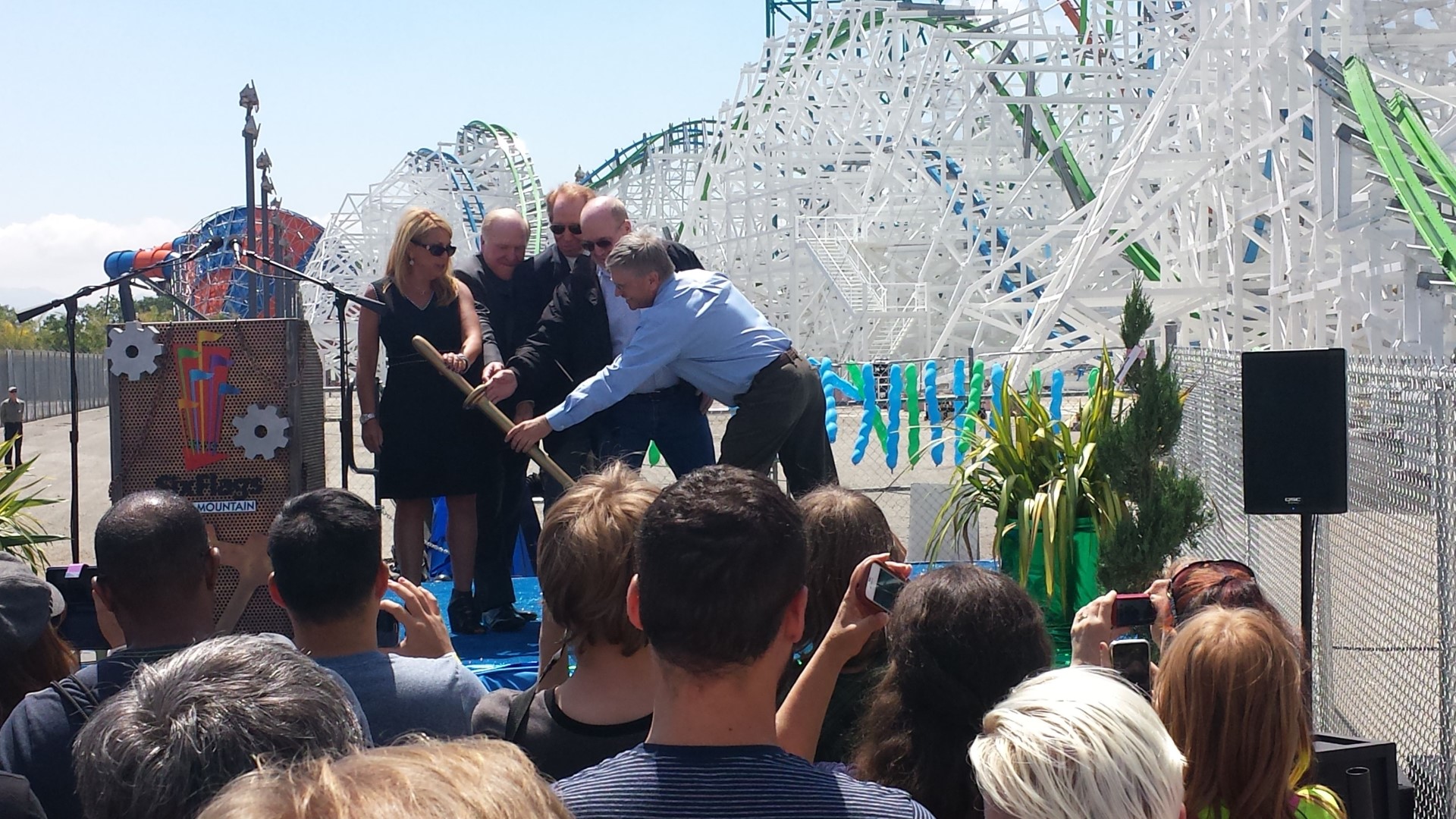 BOOM! That’s fireworks, the first ever ‘official’ Twisted Colossus train, crazy cool Screampunk music, and an official opening of the craziest coaster (airtime wise) in the state of California. Twisted Colossus I’m telling you, is a CRAZY Twisted Airtime-Machine, and is definitely among the most spectacular rides on earth. 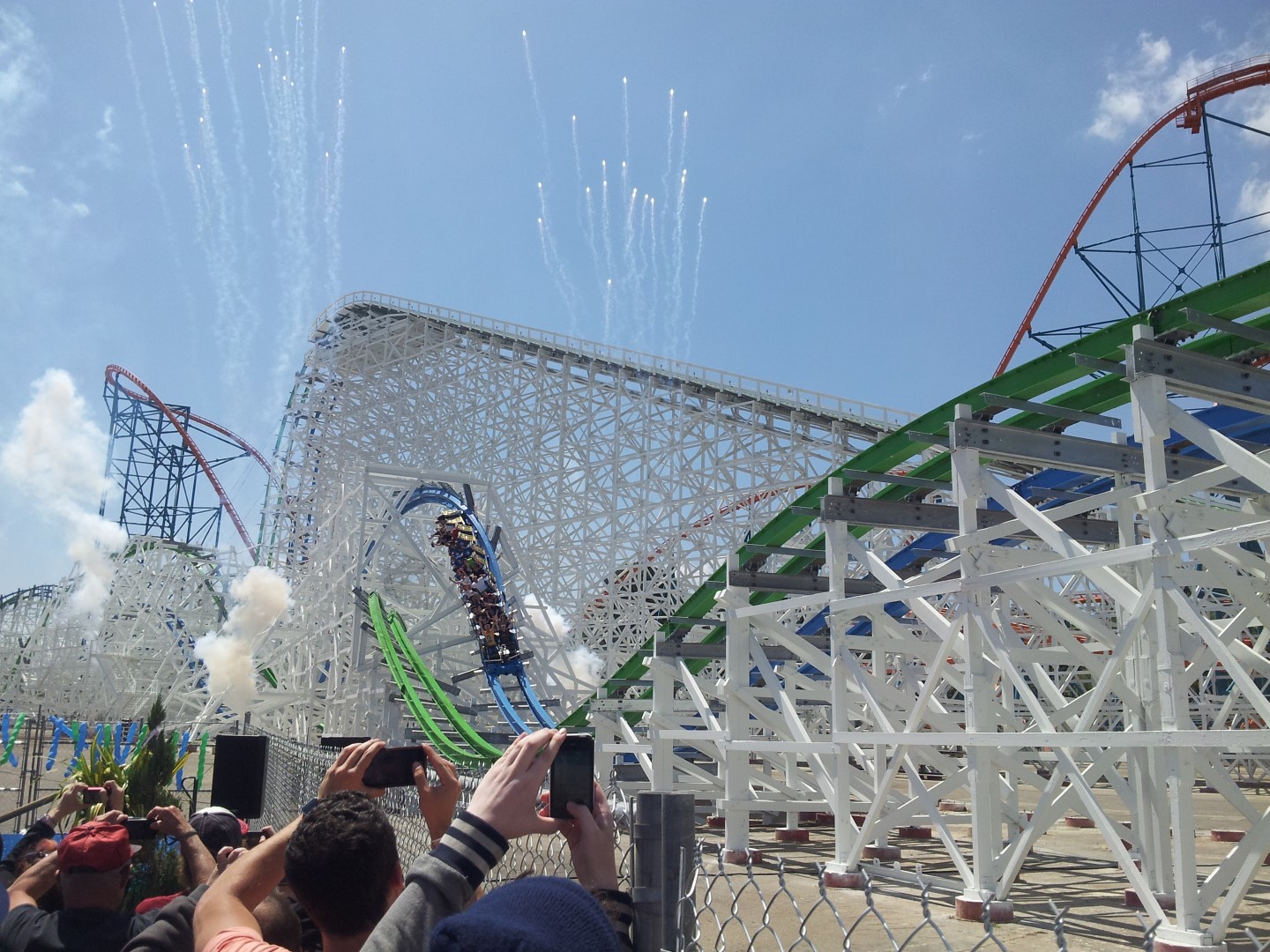 Here’s the B-Roll vid to show you the official opening ceremonies, and some cool Twisted Colossus movement.

We then had a preview of the new show ‘Kwerk’. (The theater was foggy, just so you know when looking at the pictures). 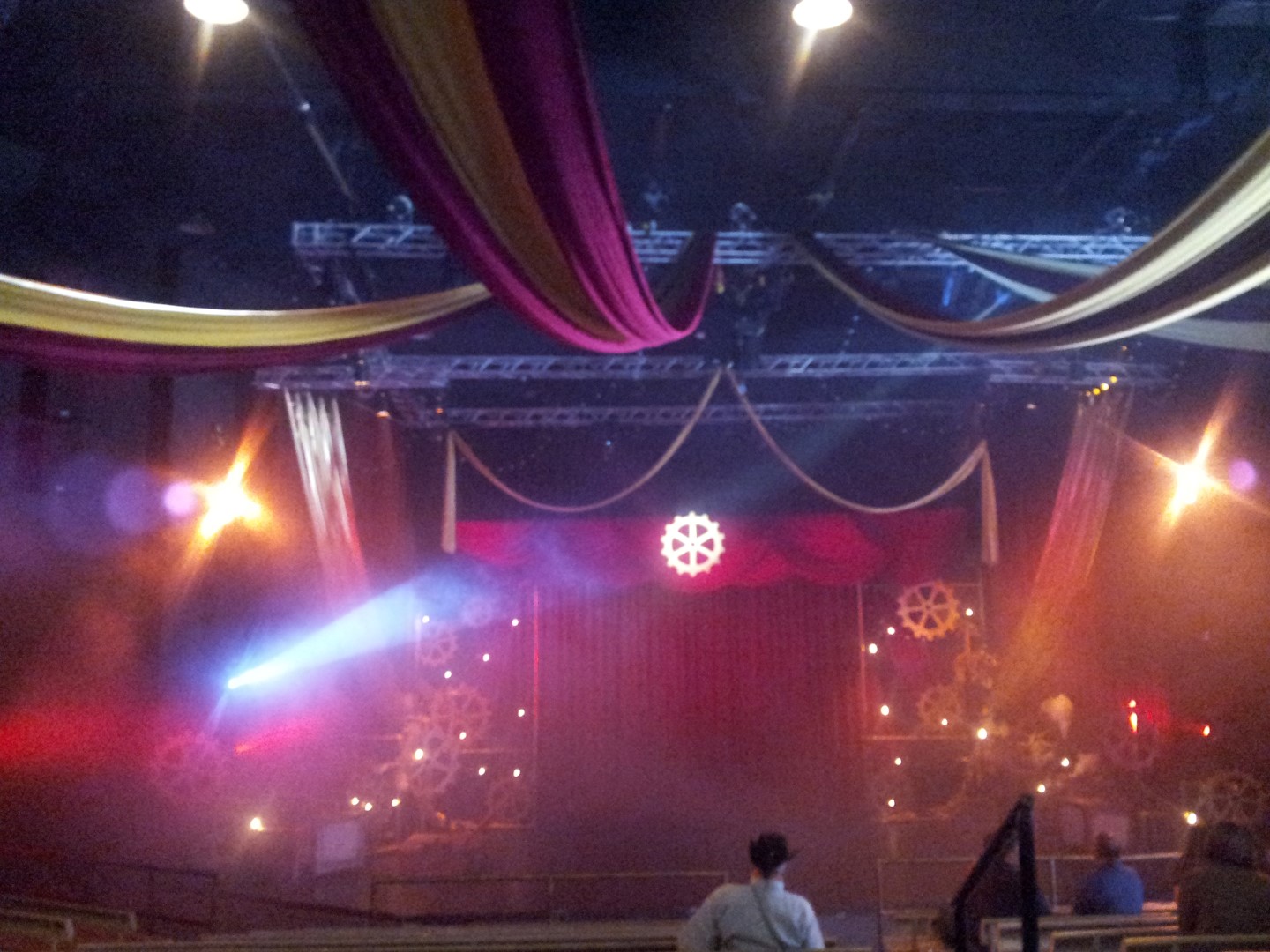 The show combines dancing with cirque acts, and it looked incredible. In addition, the theming inside the theater is amazing as well. They really wen full out with the steam-punk idea, and even the show is all set in a steam-punk theme. 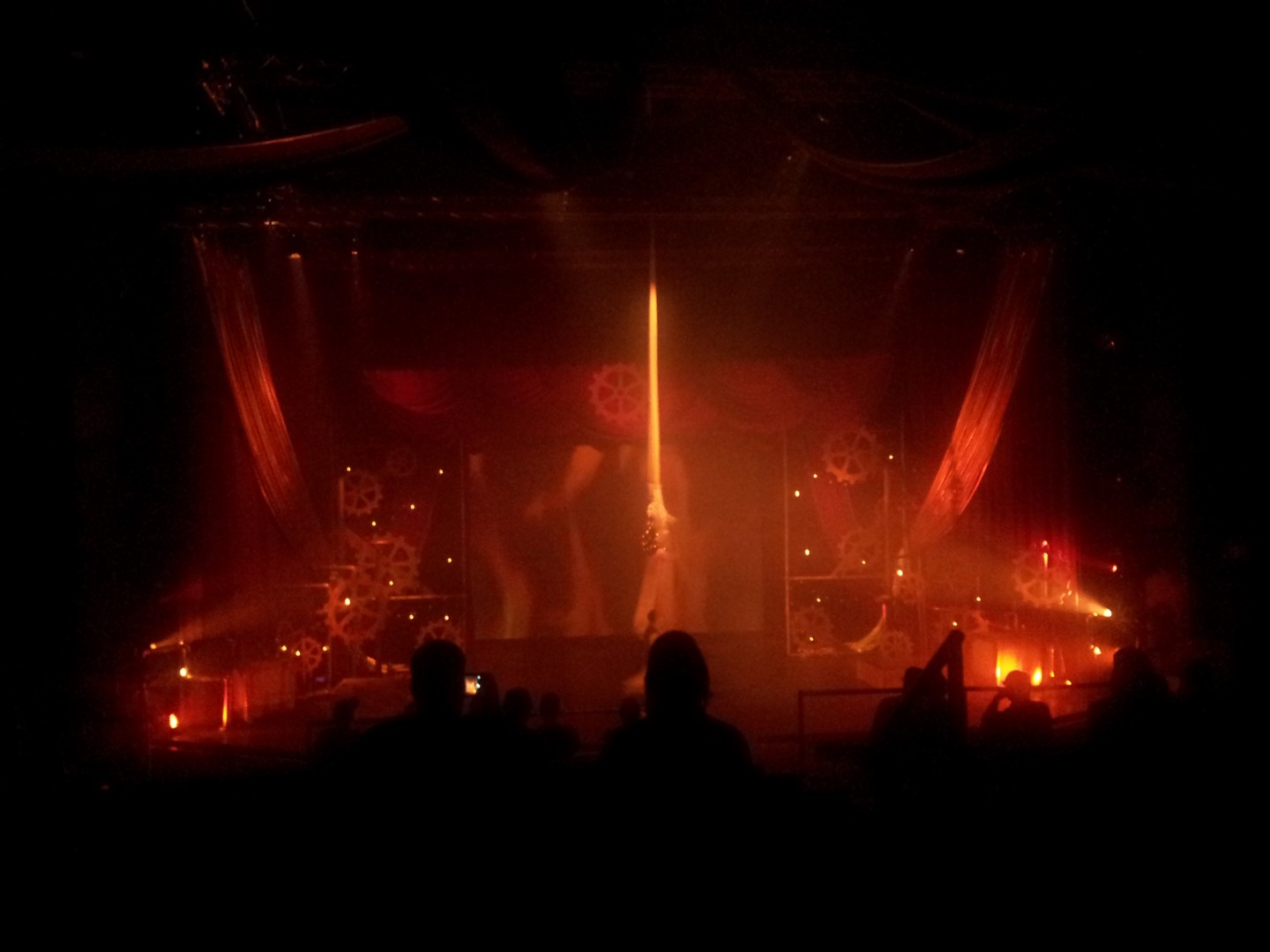 It was only a preview, a way shorter version of the actual show. We’re back on Saturday to see the entire show, and report on the opening day crowds for Twisted Colossus!

Let’s talk a little bit about the Screampunk District. The side of the GearWorks Theatre has three big ads on it, one for Twisted Colossus, one for Kwerk, and one for Scream! 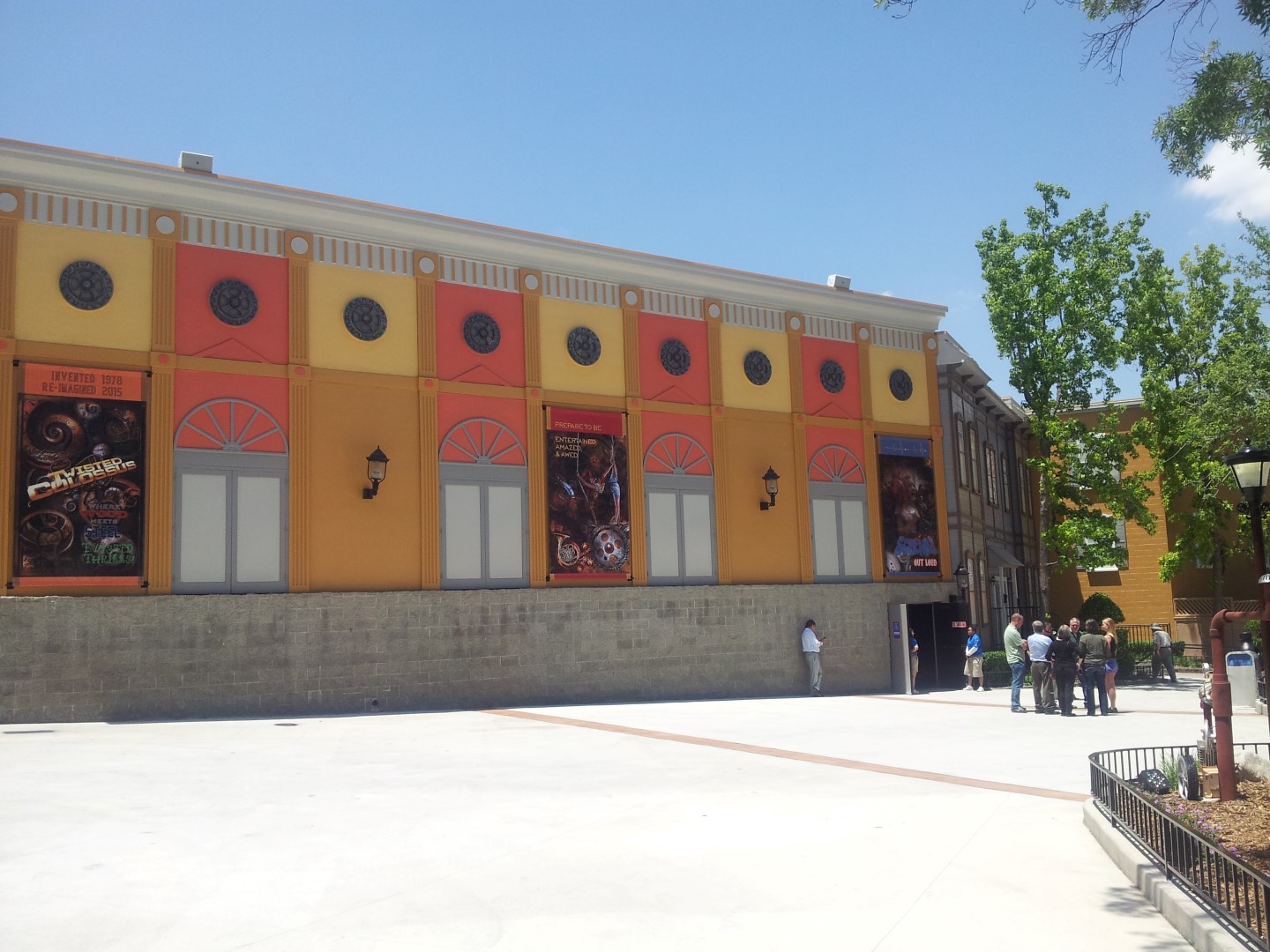 The bathrooms have been entirely refurbished. Which I’m sure everyone’s VERY thankful for. 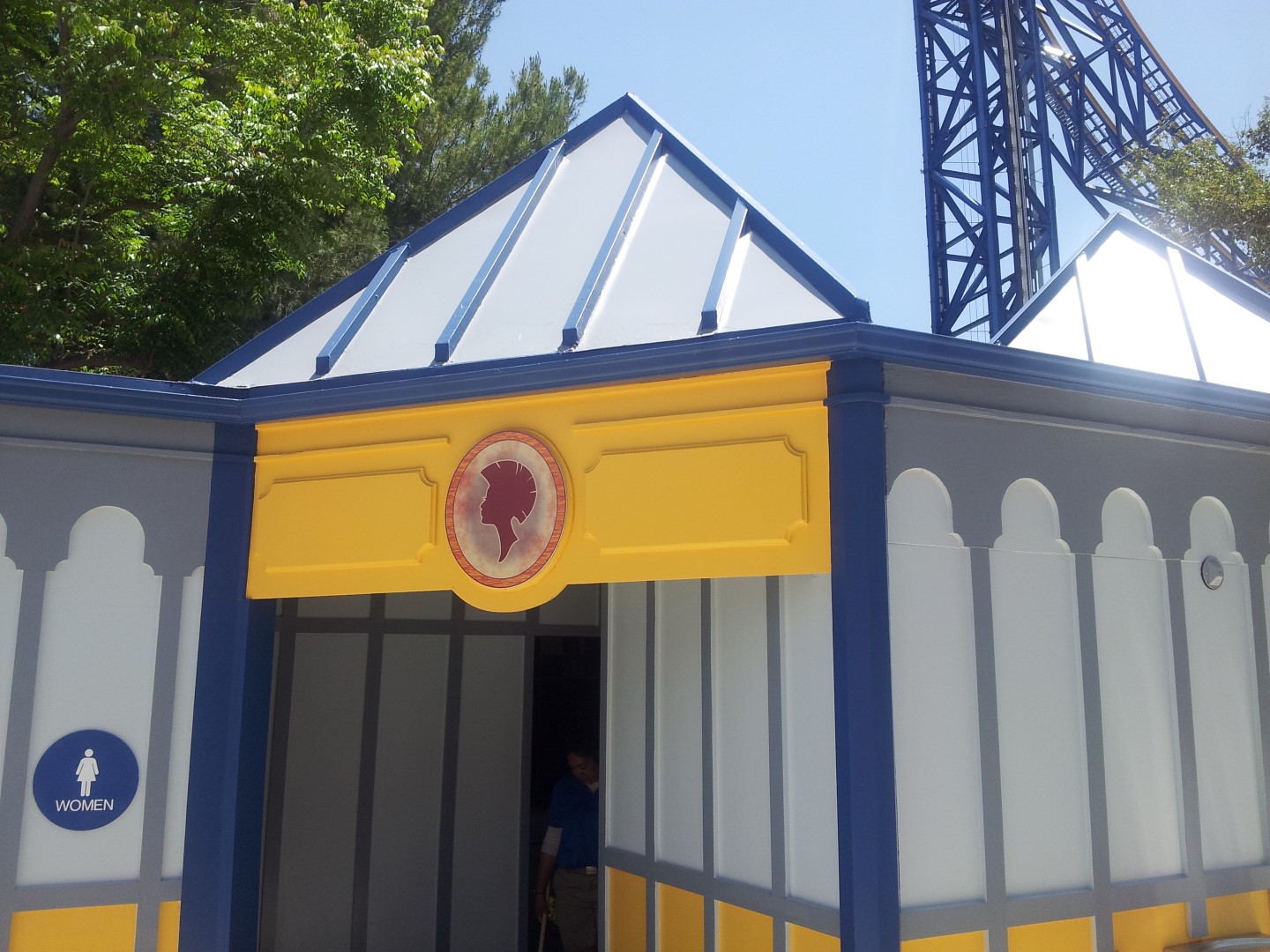 Here’s a better look at the front of the GearWorks Theatre. It looks very nice. I wasn’t sure if I was going to like the looks of it when the concept art came out at first. But it turned out very well. Just like the rest of the area. 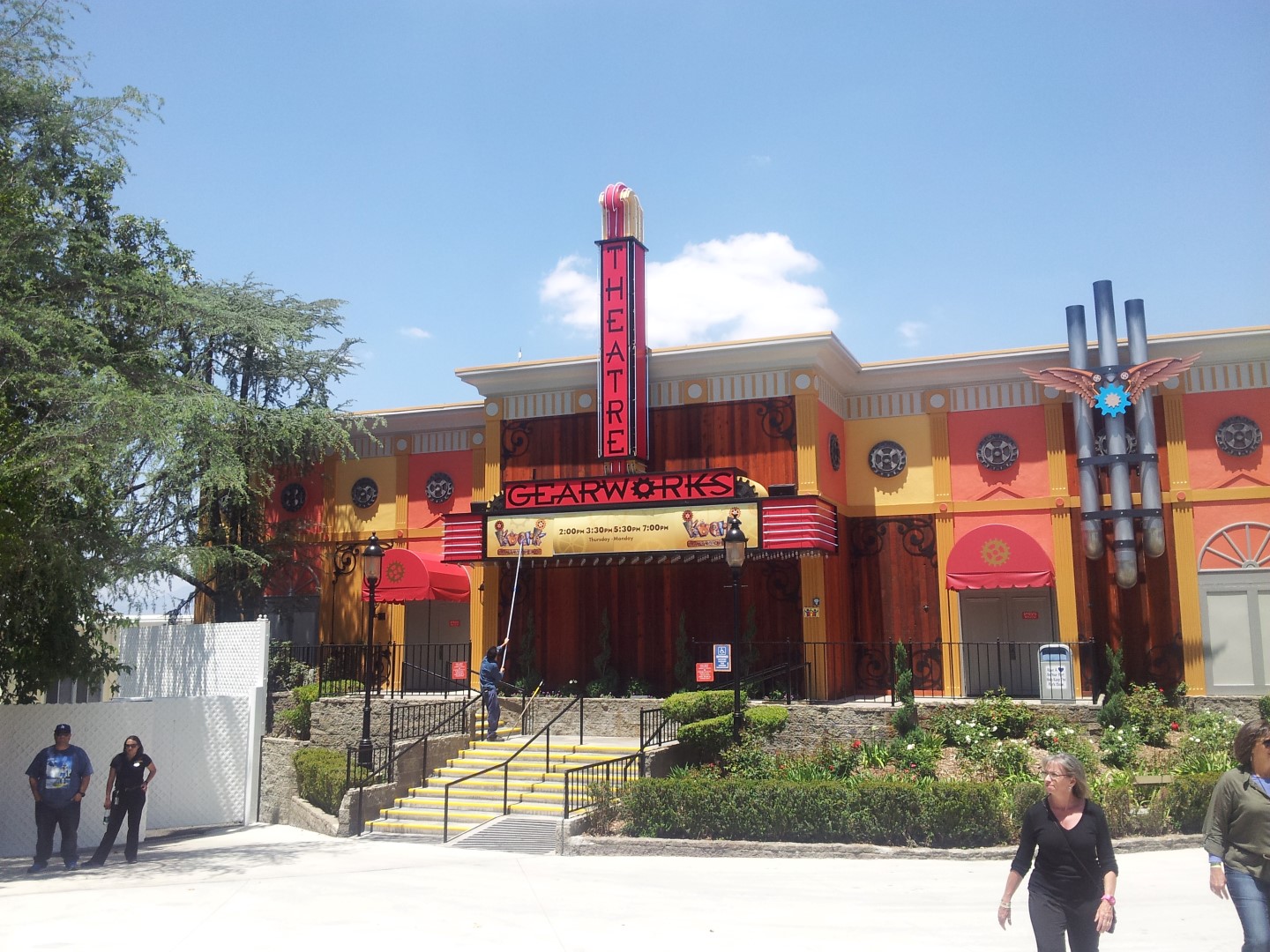 Something really cool, on the side of the theater towards the back, they have plastered all windows with business-ads kind of things, they relate to the Six Flags Magic Mountain team. Couldn’t help but post a picture of the one on the top, called Sue & Connie NEWS PRINT. (Sue and Connie are the people most media outlets work with). 😀 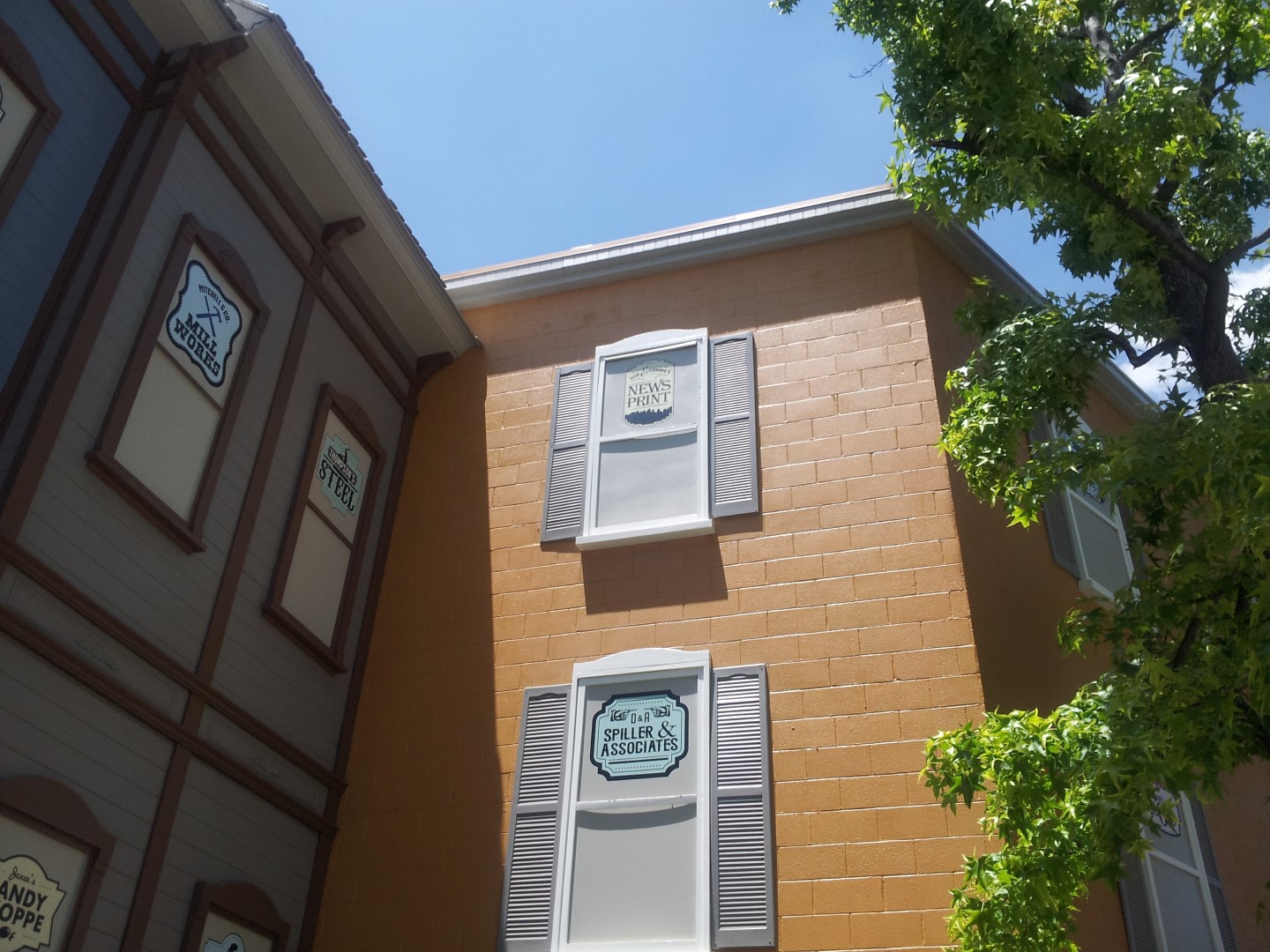 And I’m going to make a statement that many of you (including me) wouldn’t have seen coming a couple of years back… But, Six Flags Magic Mountain actually HEAVILY themed this area. Everywhere guests look, they’ll find steam-punk theming. Everywhere. Like this steam-train locomotive thing. It actually releases steam every few minutes. And look at those lampposts around it! These sort of lampposts are all over the area. 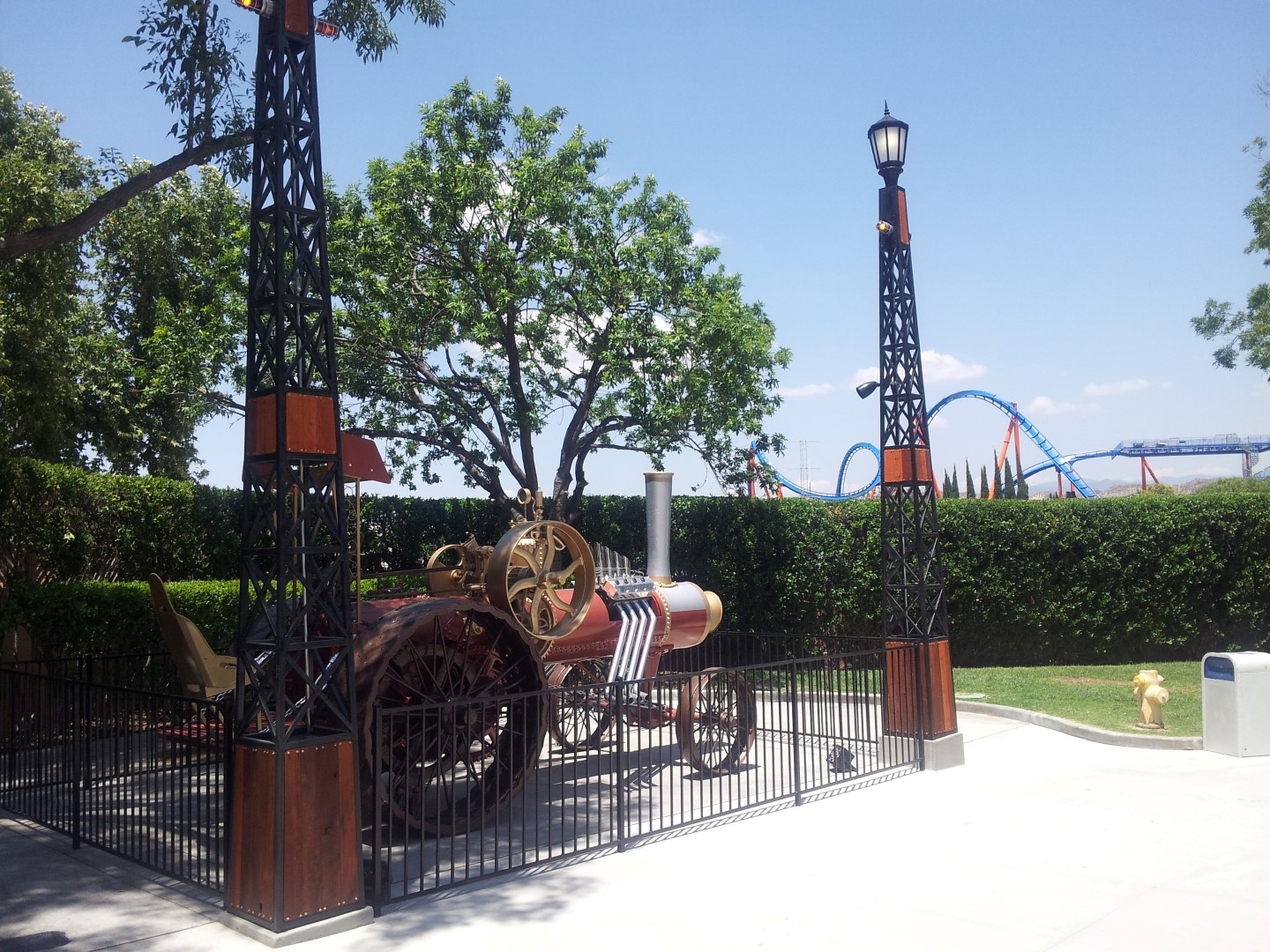 Twisted Wiches sign was placed right before the media event, though the restaurant isn’t quite ready to open yet. They’re still finishing up inside. Hopefully in time for a Saturday opening! 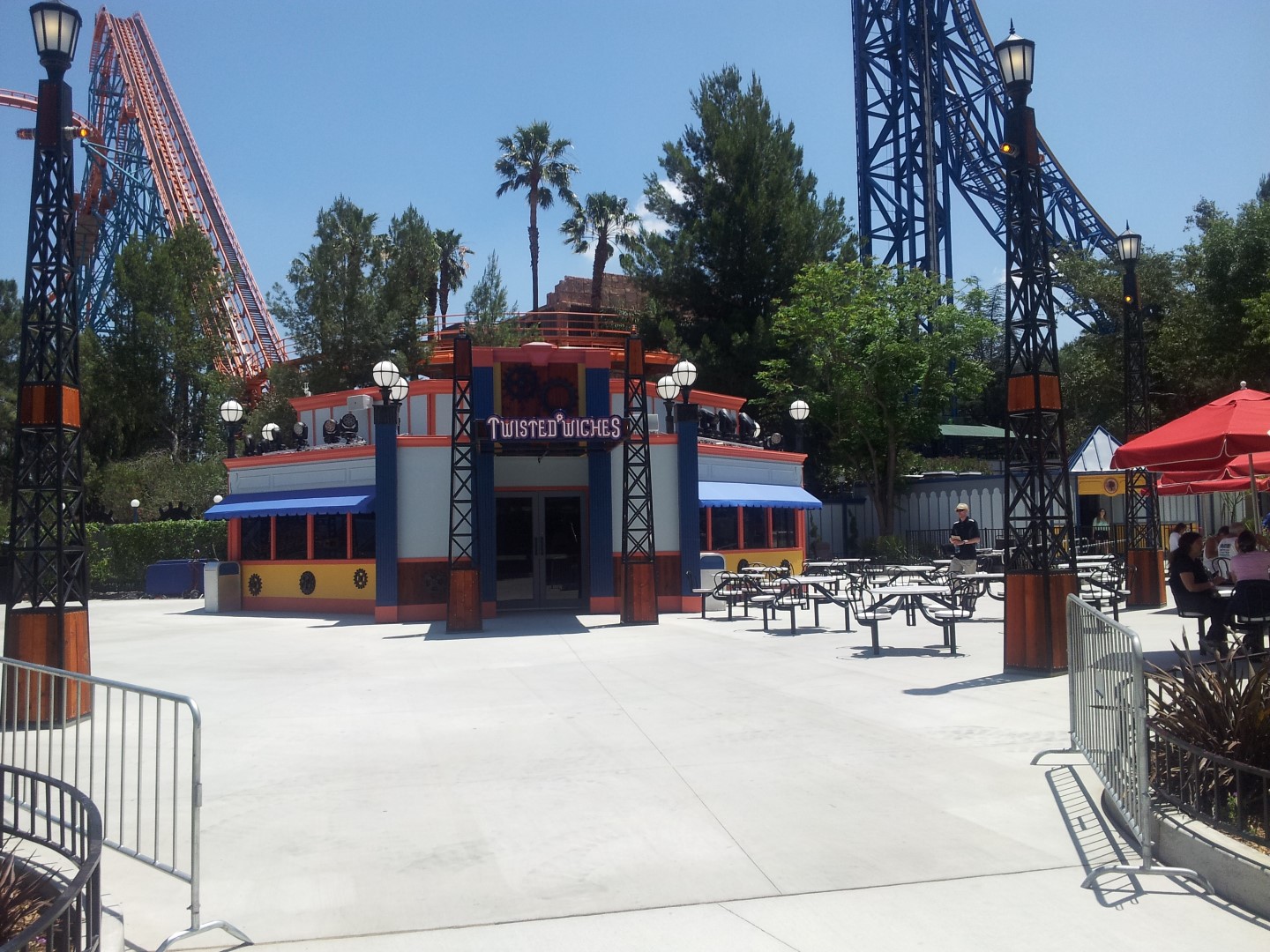 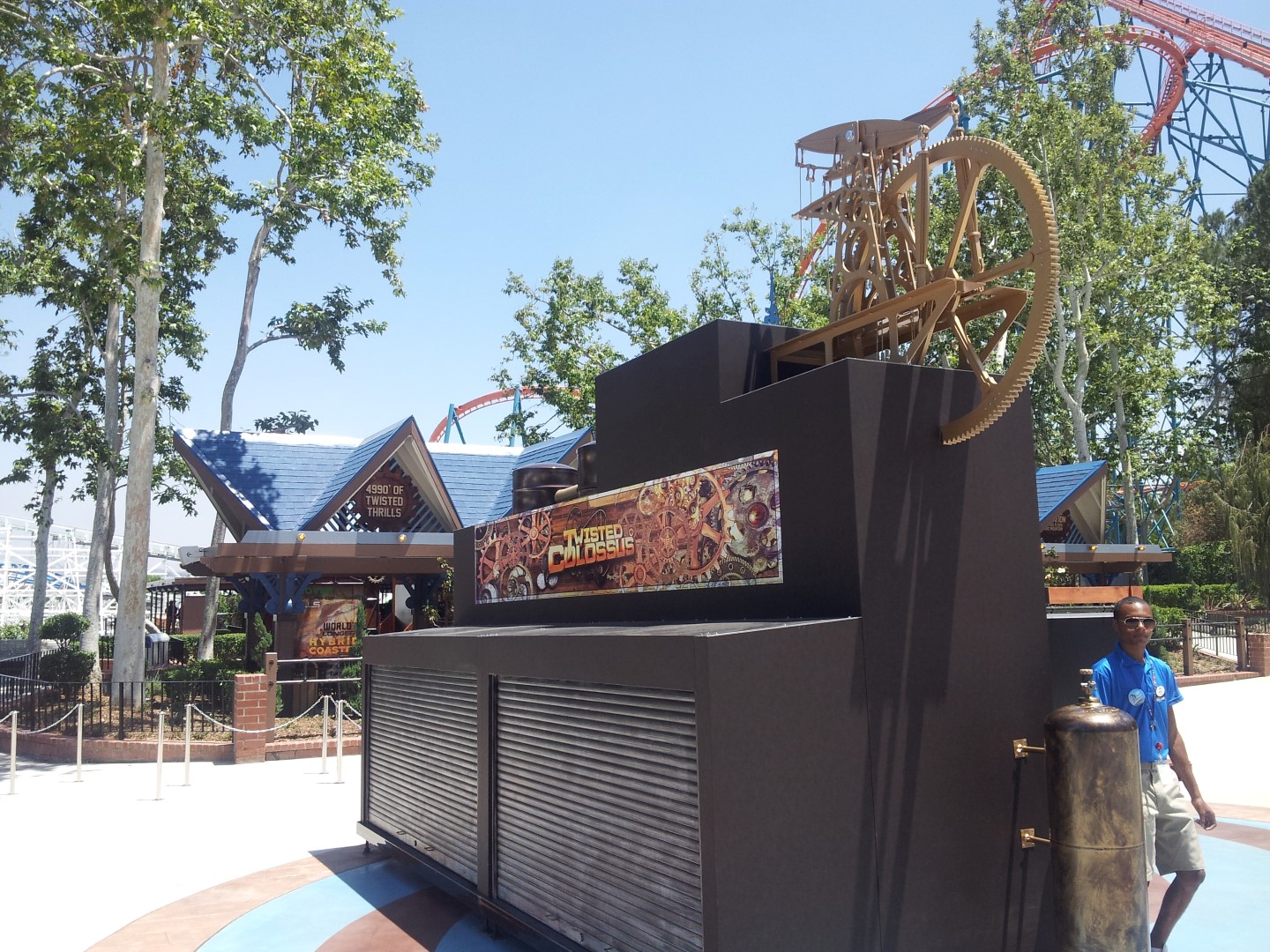 They opened up Scream! for us for a little bit. Yeah… I was hoping for a great smooth ride on Scream!, but it was very shaky, riding Twisted Colossus about 50 times was all fine, but two rides on Scream! and the bouncing of the train started giving me a headache… (Perhaps that was due to us two being the only ones on the entire train…). 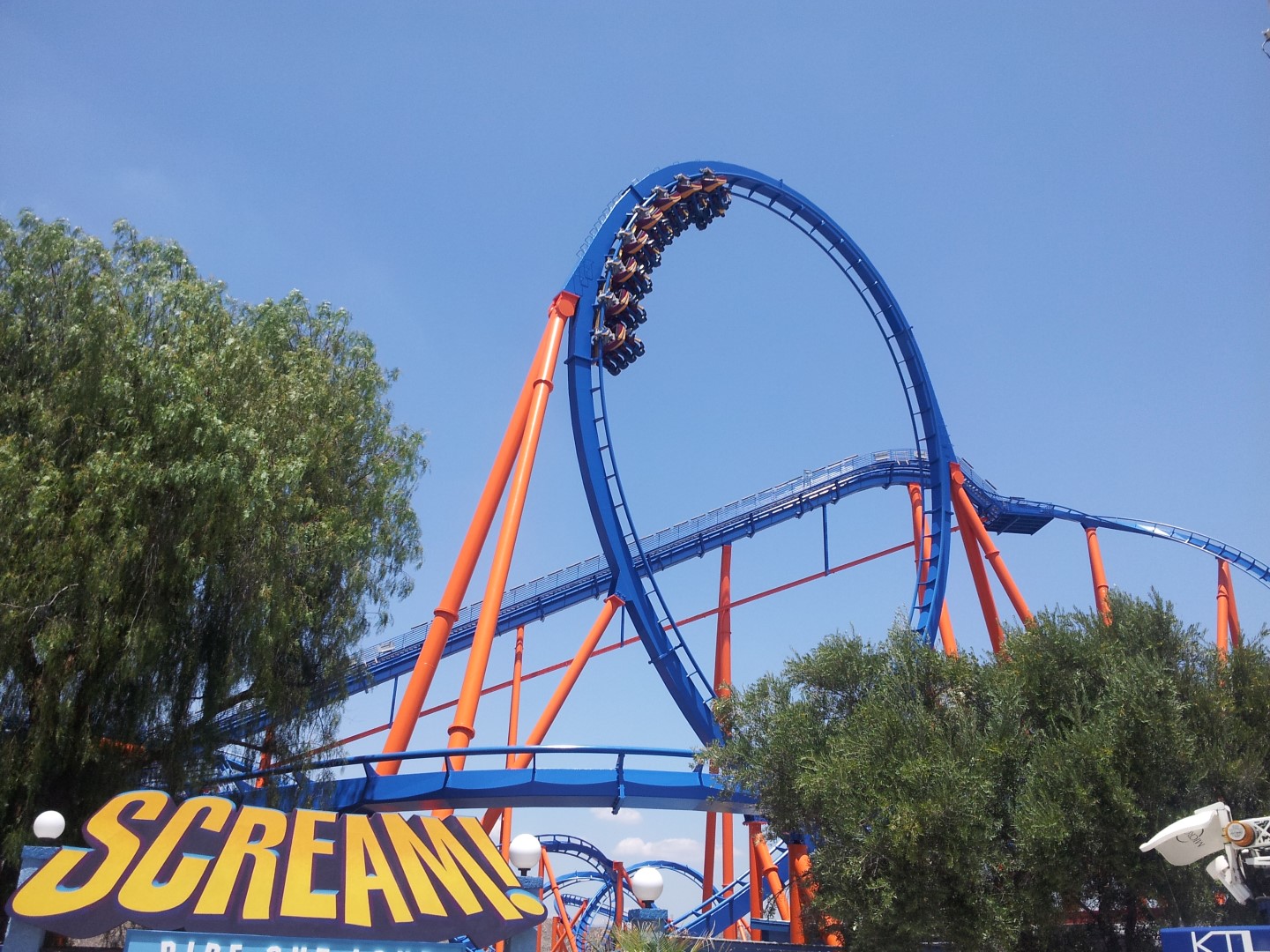 Got to love that new sign though! All ads/banner kind of things around the ride have been replaced by new ones, suiting the Screampunk Theme. 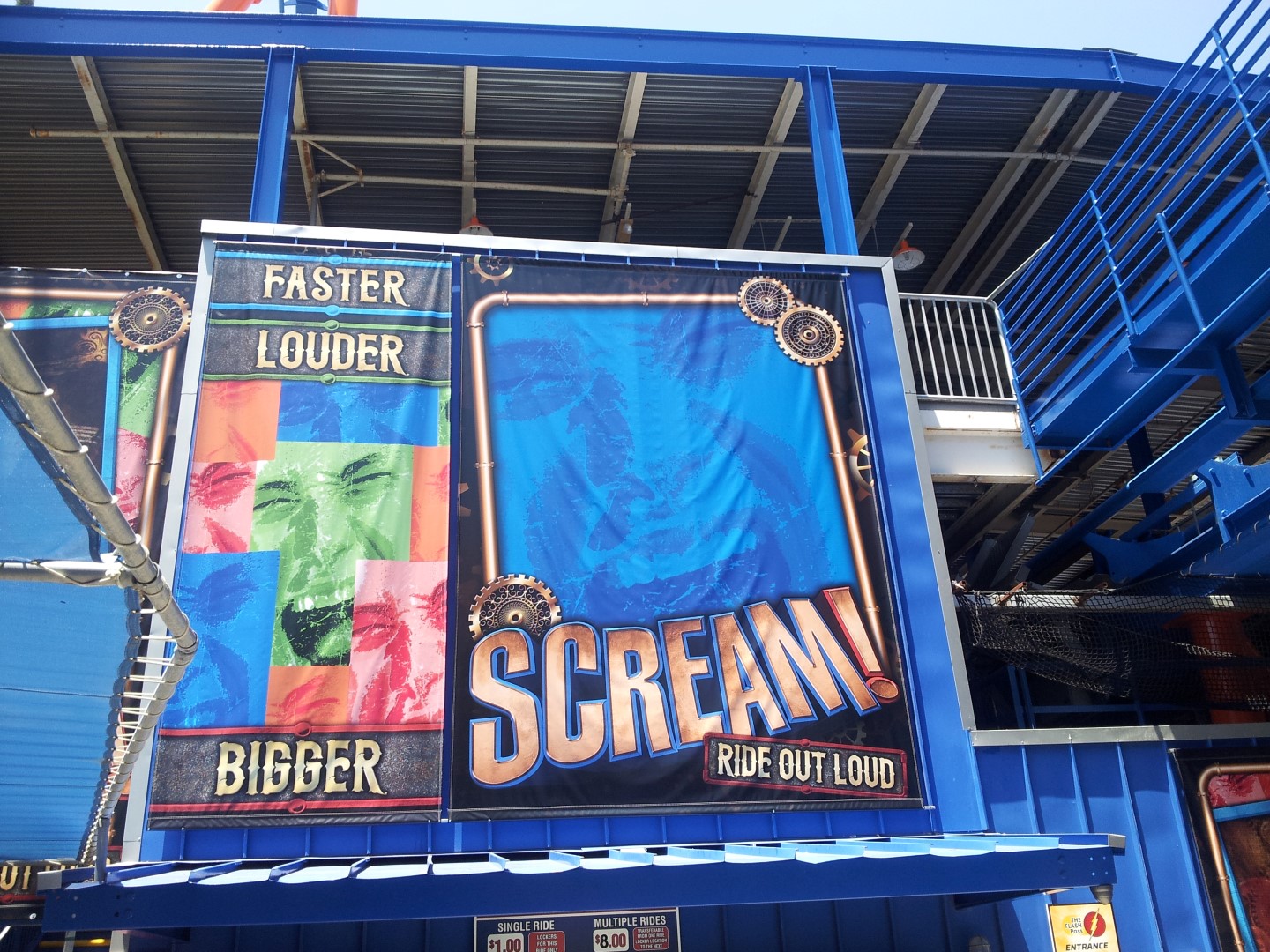 Let’s take another look at the theming in the area, the Twisted Colossus line is very well themed actually! Look at this balloon-thing! 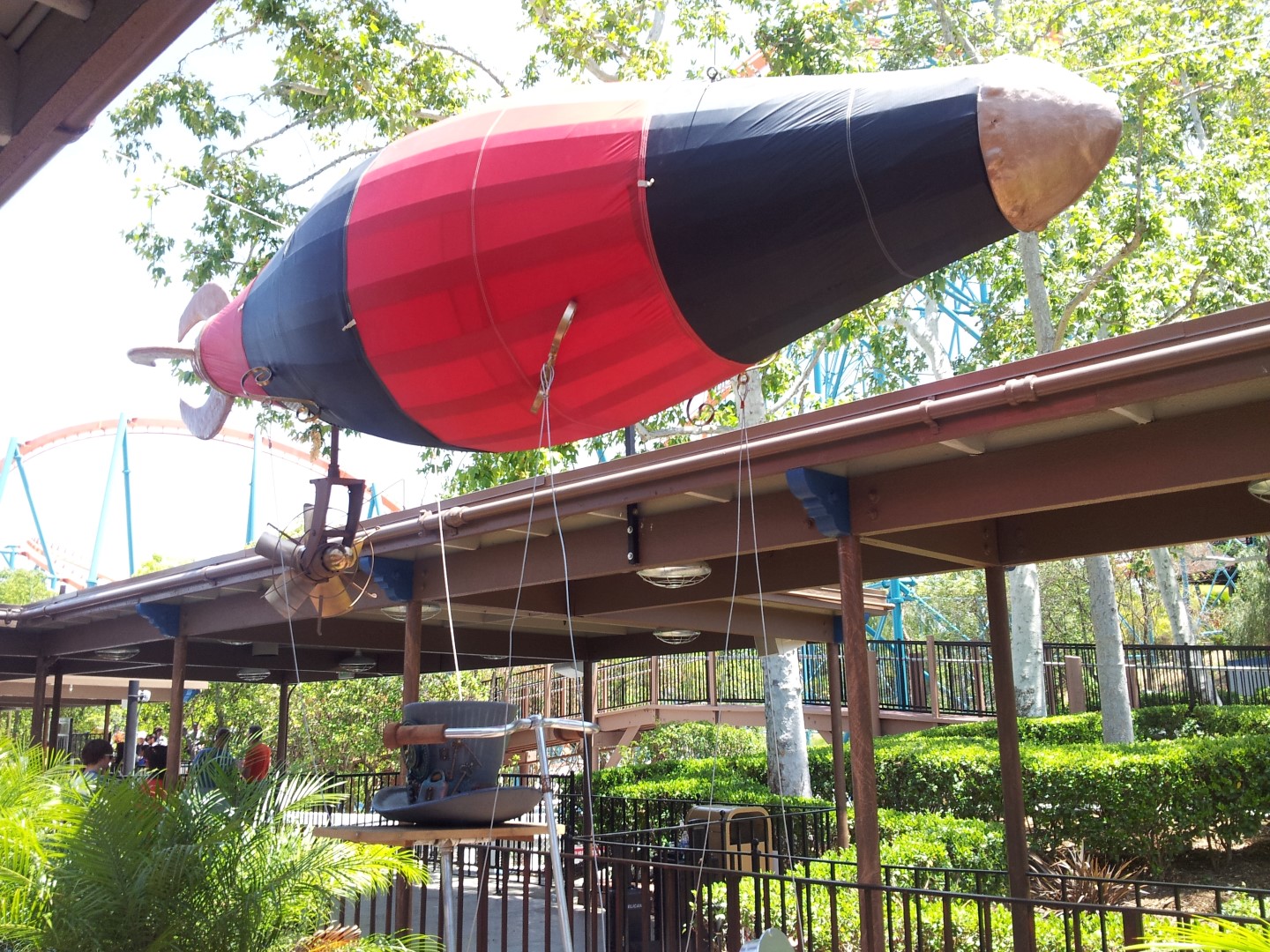 There’s several large displays around the line. We’ll be looking at a lot more theming around the line and the area in our upcoming reviews and articles! 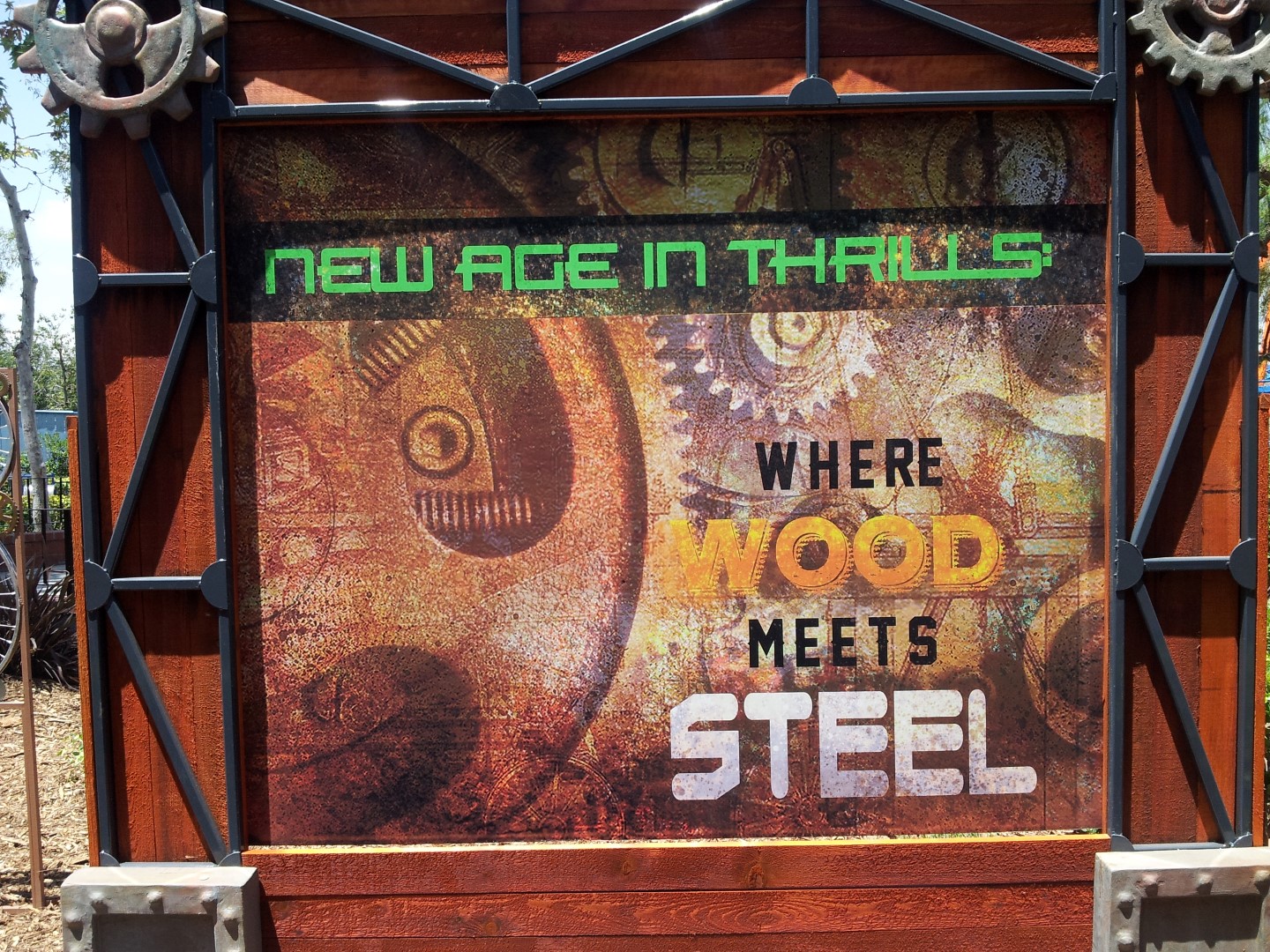 Let me give you a little insight of my experience on Twisted Colossus, before I write the long detailed review. Twisted Colossus is something different. Amazingly different. The blue side is warming you up for the more intense and, arguably, better green side. The forces on TC are unknown to most Californians, which makes the ride an instant hit. The sheer amount of ejector air-time on this ride is incredible. Besides the lift hills, you’re pretty much lifted, or EJECTED, out of your seats the entire time. It’s crazy. My favorite parts of the ride would be the blue Drop under the Double-Down, the green side of the High Five, and the green side of the Top Gun Stall. It’s incredible how smooth it feels, while you’re floating upside down, being ejected out of your seats, or are twisting in all directions within seconds. It’s just simply incredible. When the trains race, you’ve arrived in heaven. Coaster heaven. It’s the most fun you’ll ever have on any ride. It’s not explainable, almost. I’ll run through every part of the ride, of the train, of the racing, etc in the full Ride Review, which will be published in the near future! 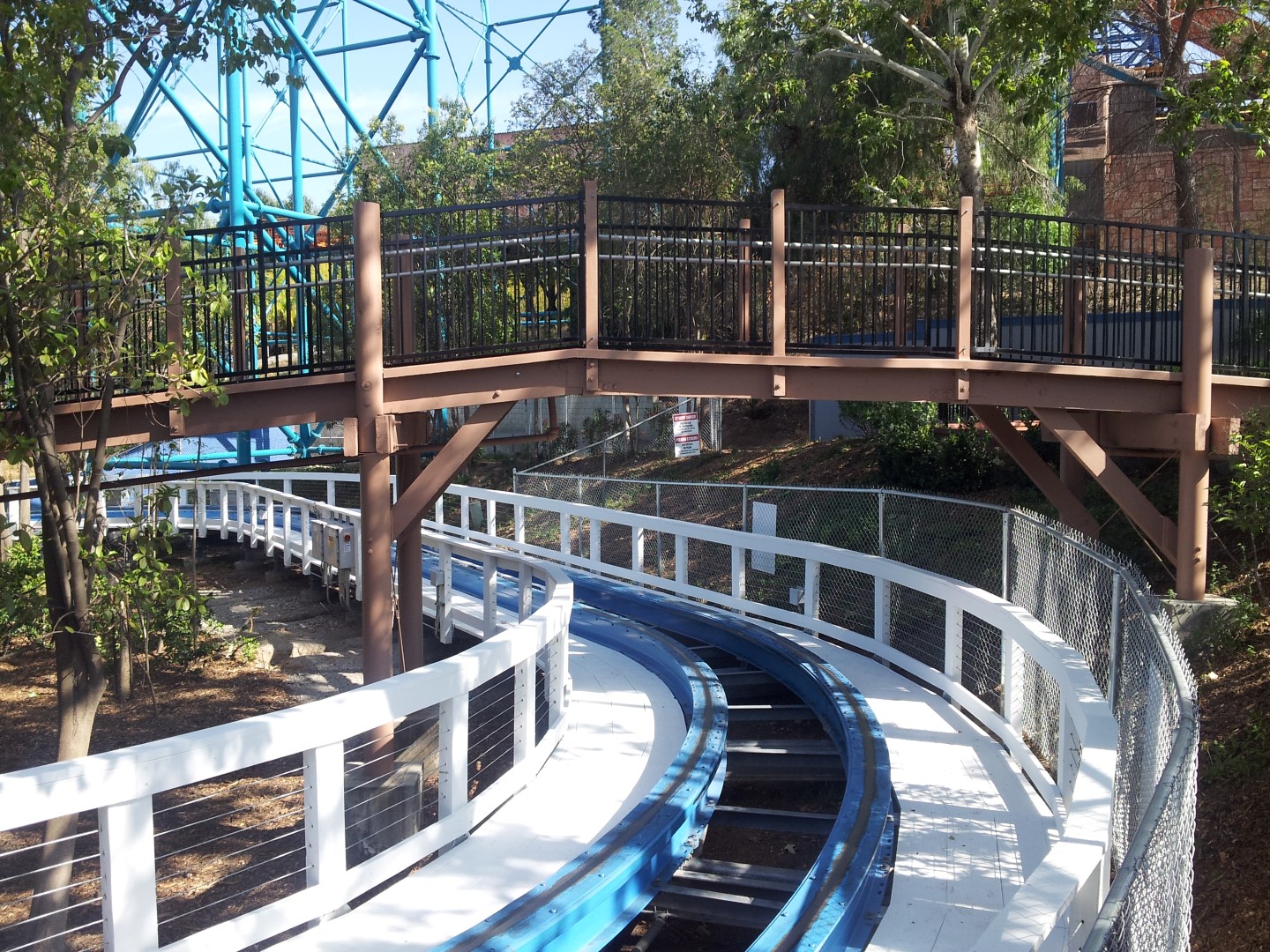 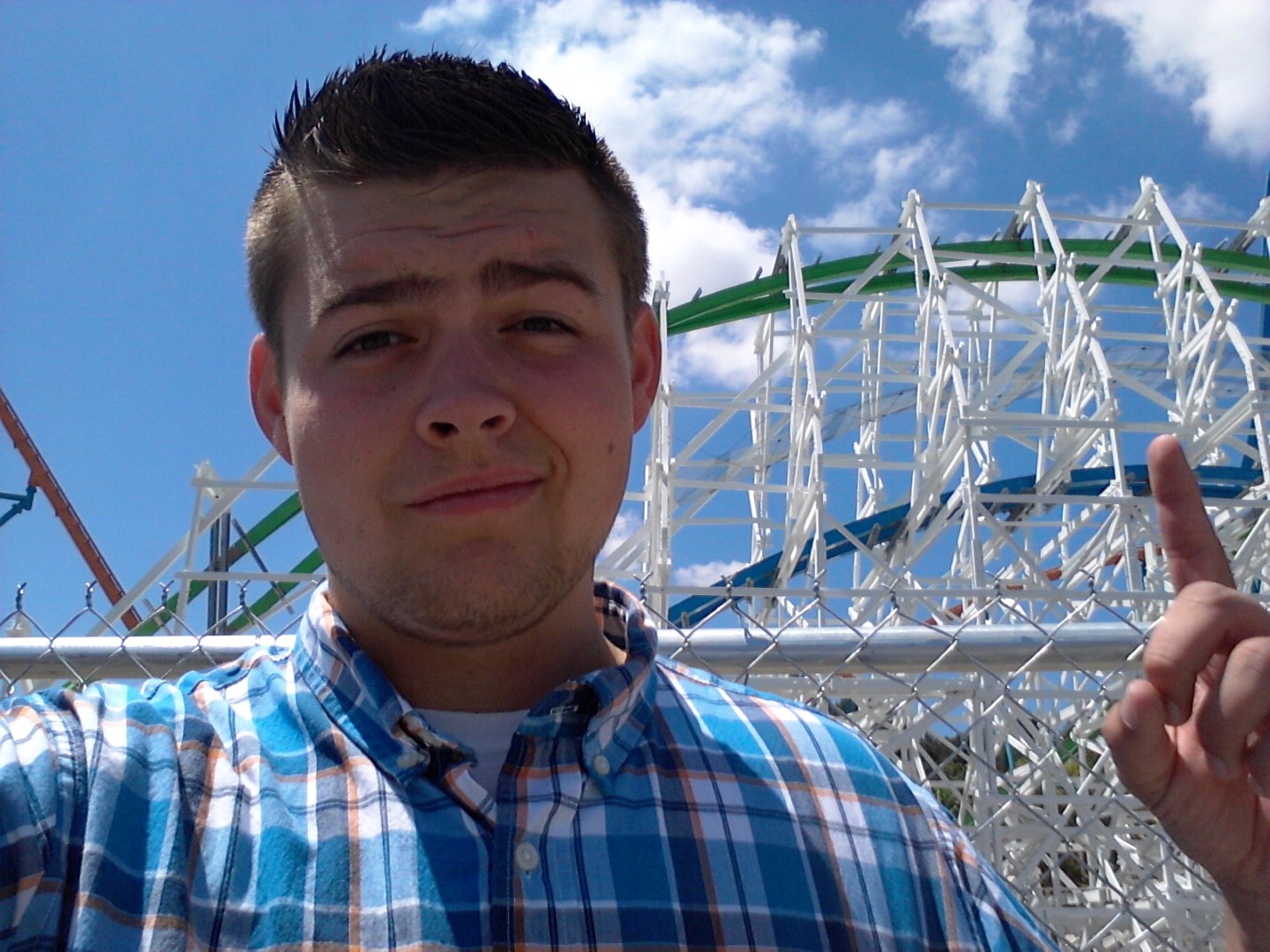 A fun little note before we wrap it up, the black lampposts that were already there are all receiving rust-colored paint to make it fit the new theme! 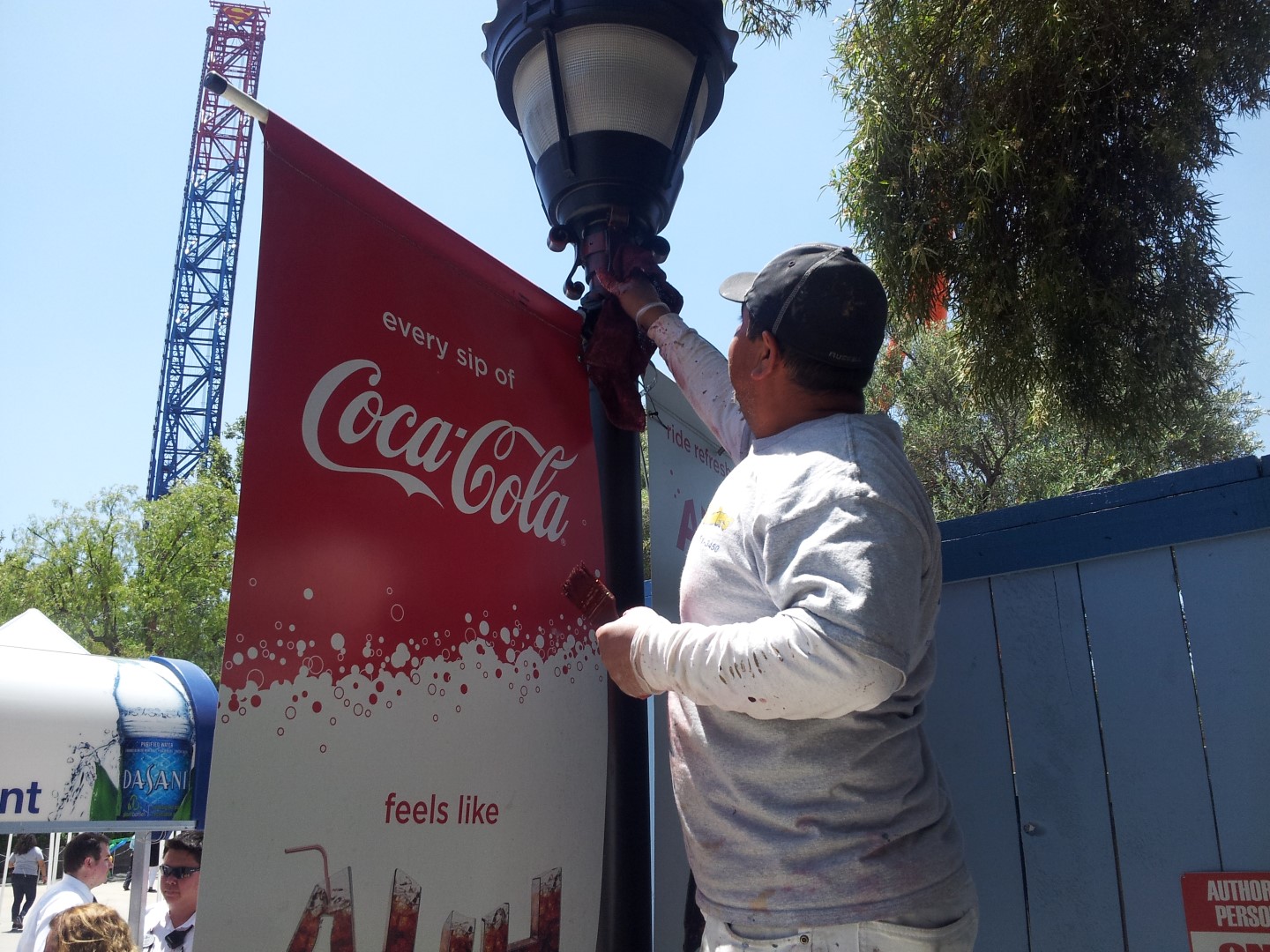 The Screampunk District, it’s record breaking ride, and awesome new show, are no disappointment. It’s incredibly well themed, and Magic Mountain set themselves apart with these additions. The park is rising in an amazing come-back, they’re improving rapidly! 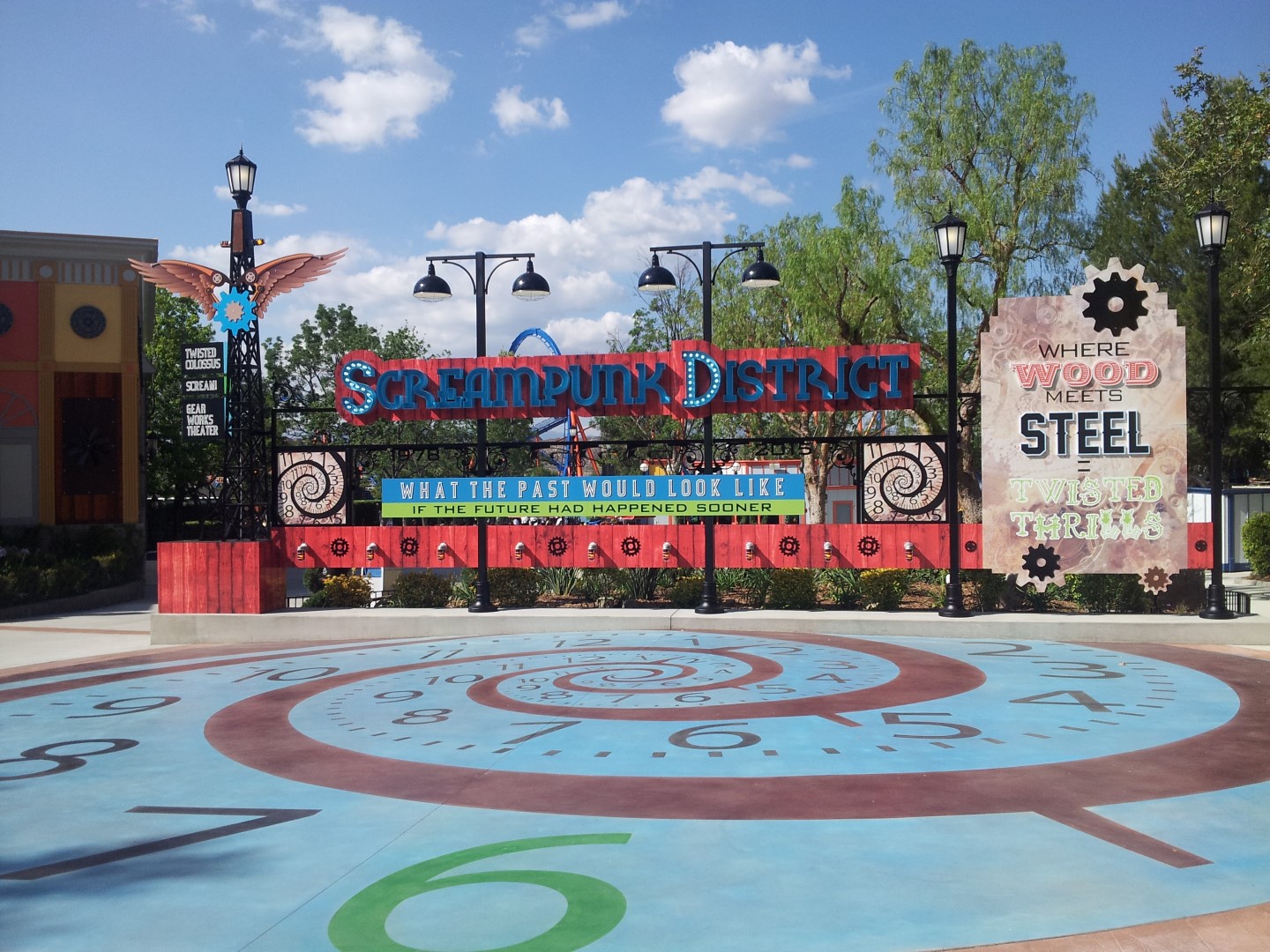 Thanks for checking out this report of the Media Opening of Twisted Colossus and the Screampunk District! We’re having full reviews of the area and the amazing new rides following in the next few day! Click here for all Twisted Colossus related videos! (Like POV’s, B-Roll, etc!)