Sean: It has been a few weeks since I traveled across the globe in search for an exciting roller coaster that not many people have had the chance to ride, but that everyone is already obsessed with. My travels took me to Shanghai Disneyland, which is home to TRON: Lightcycle Power Run. Perhaps the best coaster Disney has ever opened.

– Over the years, many of our images have popped up on other sites and forums, awesome that our coverage spreads, not so awesome that not everyone mentioned where they got the images from. We are totally fine with our audience using our images, BUT ONLY IF credit is given to cabincrewcoasterkings.com. Thank you!

Let’s start with perhaps my favorite Disney area, Shanghai’s Tomorrowland. In the dead center we find TRON, the obvious marquee attraction in the area. The whole area does an outstanding job feeling modern, clean, and durable. Rather than approaching the future theme trying to be futuristic, the area feels modern and feels like something that will feel modern 10 years from now. That’s more than any other Disney Tomorrowland (or variation thereof) has been able to provide. 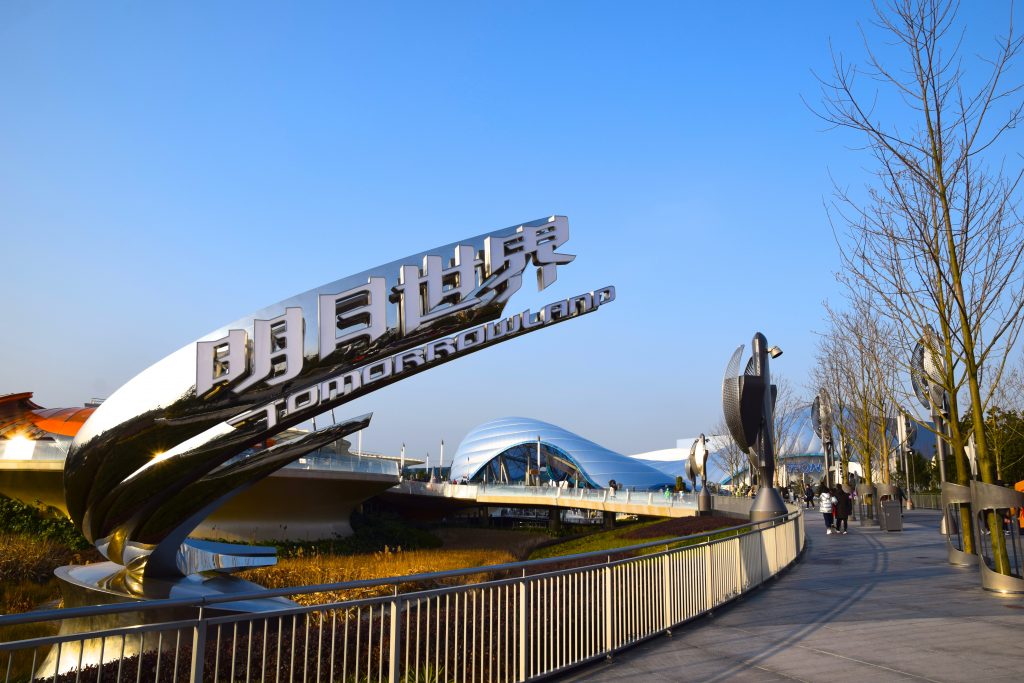 Once inside the elegantly beautiful Tomorrowland, the mix of water features, glass, granite and metal structures beautifully shows off the things Disney is capable of. But what is really impressive? Disney’s fastest roller coaster that elevates this elegant modern area into the stratosphere with it’s significant and spectacular presence. 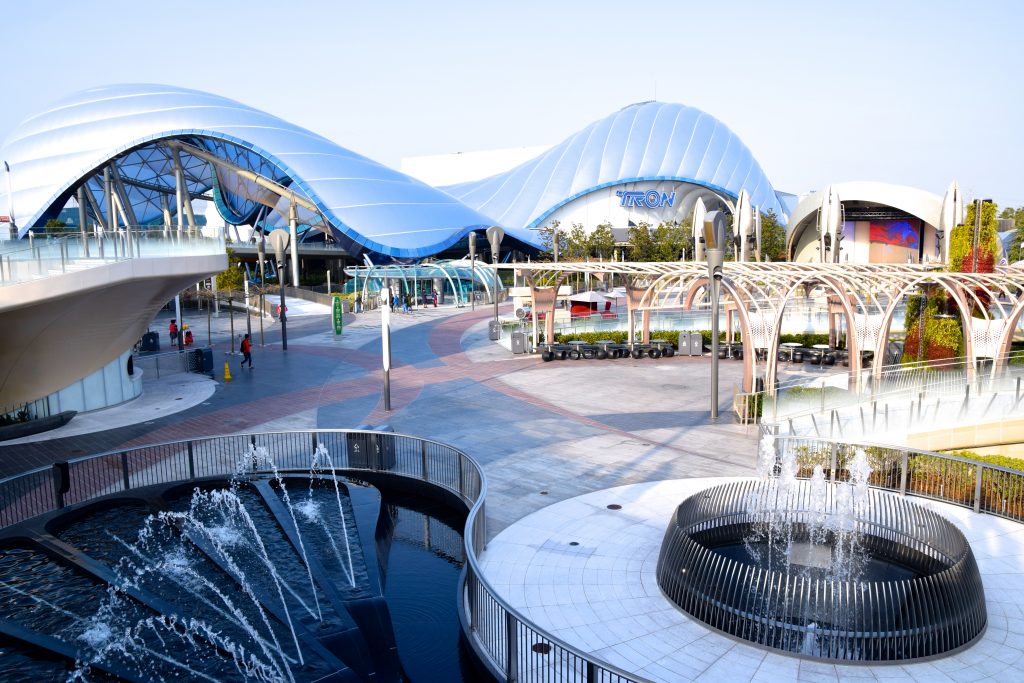 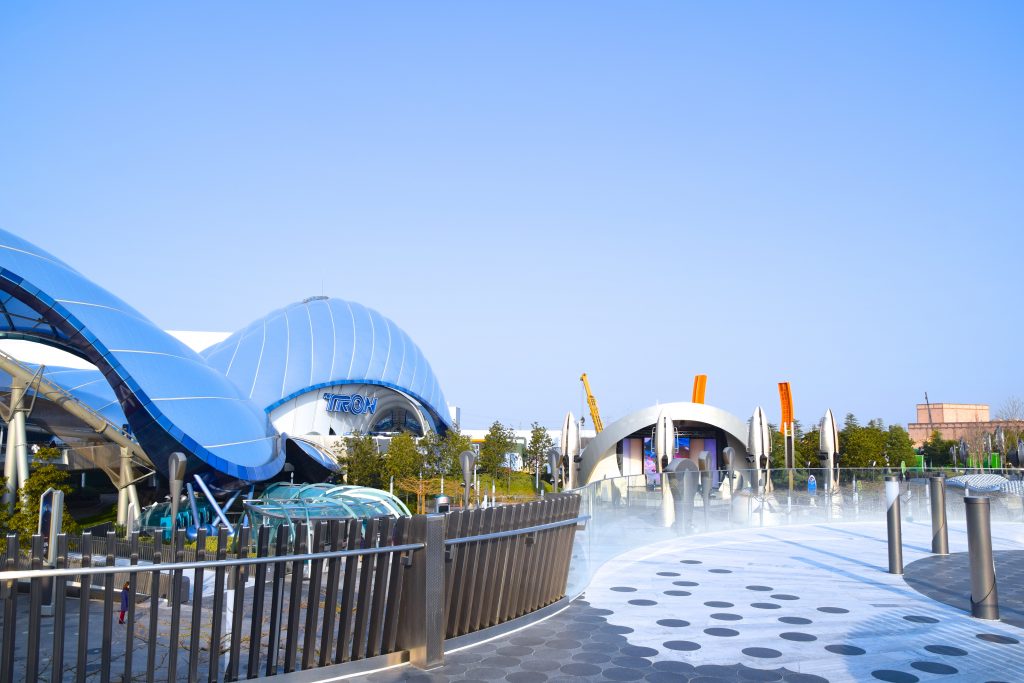 The area is spectacular by day, and to die for at night. Not once in my life was I so impressed with a theme park land at night. Tomorrowland Shanghai makes you want to cry. It is a stellar combination of perfect lighting, TRON’s remarkable presence, and surround sound music that immerses you in the simply modern, yet wondrous Tomorrowland. 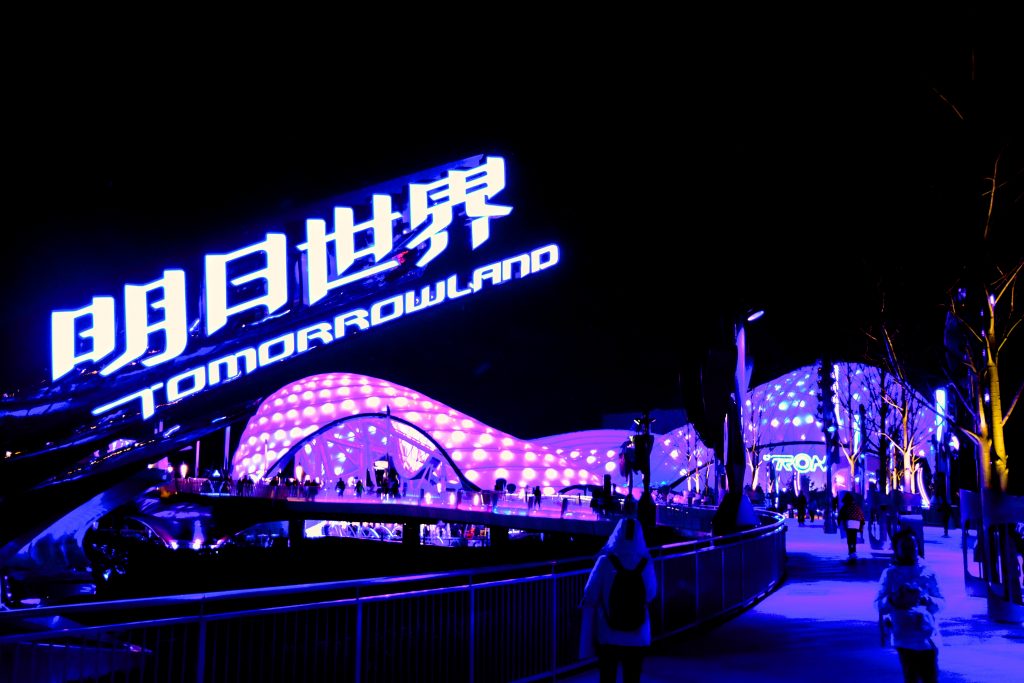 The lights slowly change radiating towards the giant TRON canopy as you see lightcycles rush by in the distance. Just standing at the end of Tomorrowland and staring in is an attraction in and of itself. 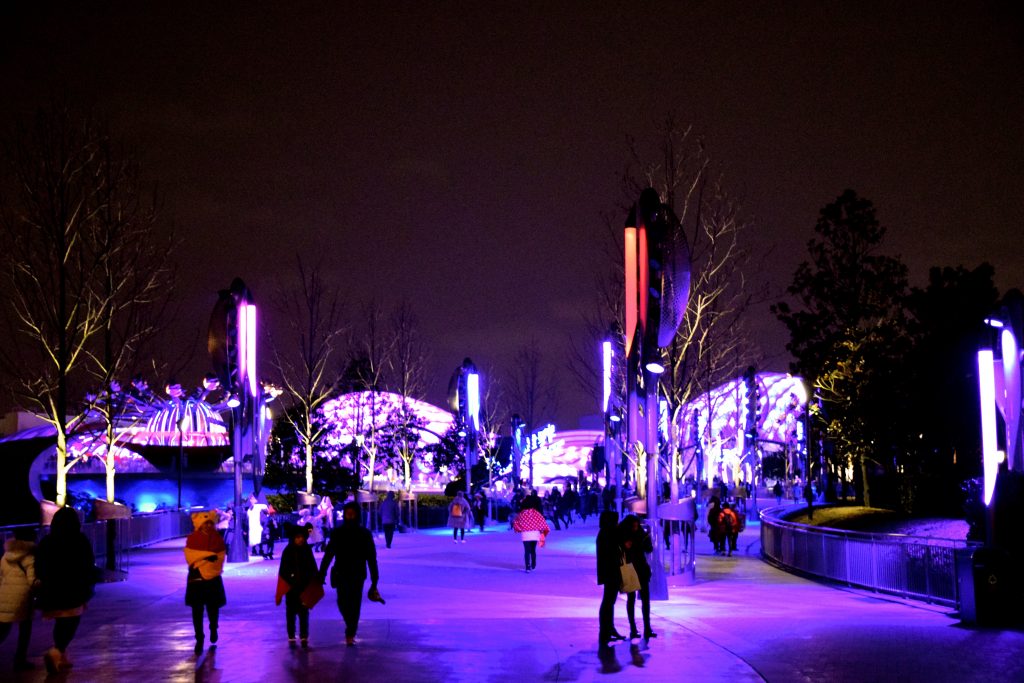 It should be no surprise that the moment you get closer to TRON, the area looks even better. Again, it is not typically futuristic, but so modern and elegant, that that’s precisely what the future will likely embrace. 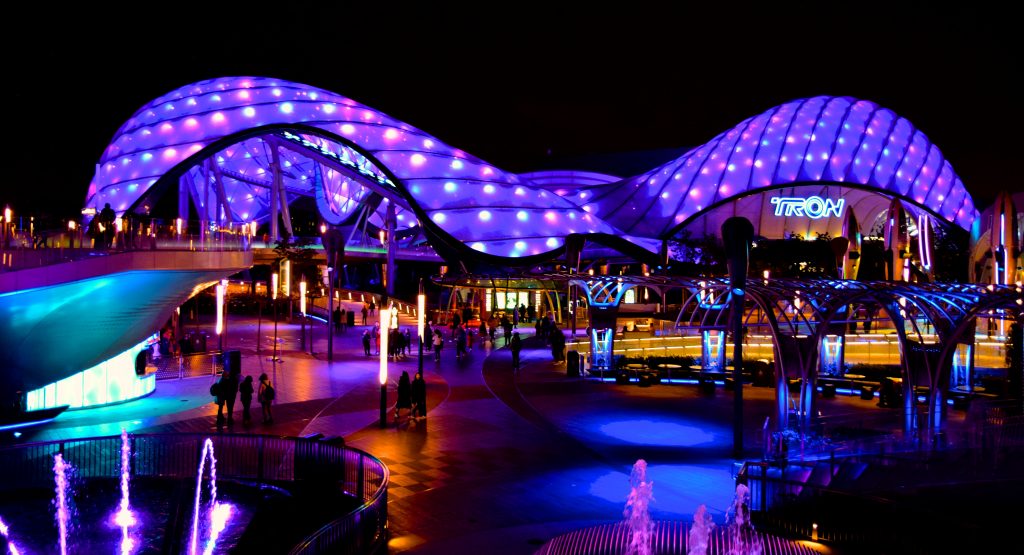 It’s time to ride TRON. So let’s discuss the experience of riding the best Disney coaster yet. 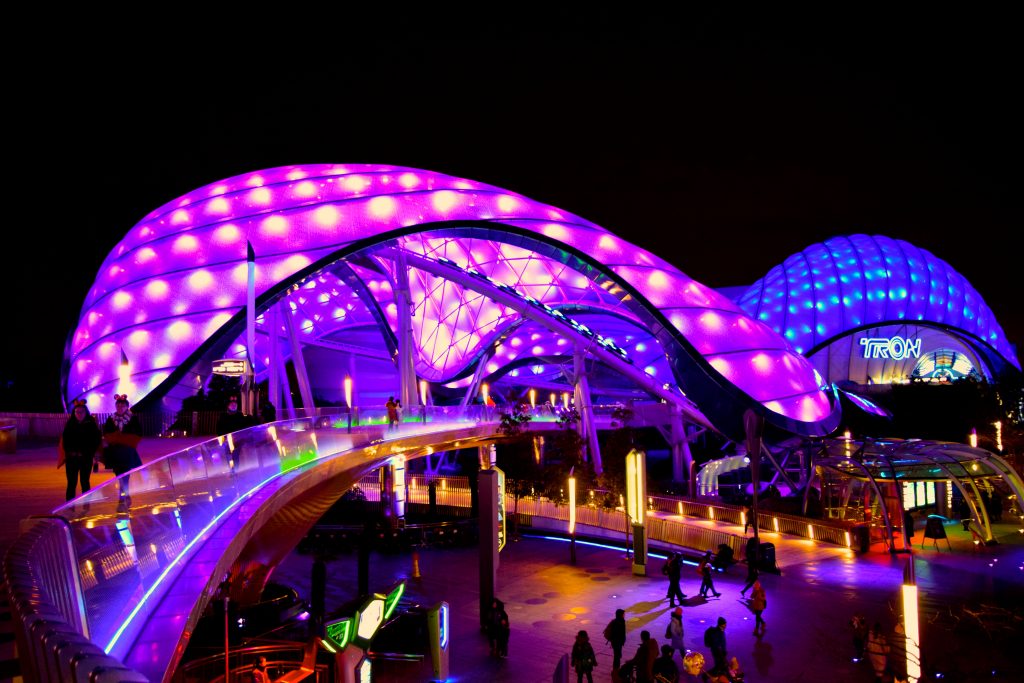 The moment you step foot under the Tron canopy, you are welcomed by lightcycle coaster trains flashing by at speeds of 60 miles per hour. The trains are the most stunning coaster trains you will have ever seen. 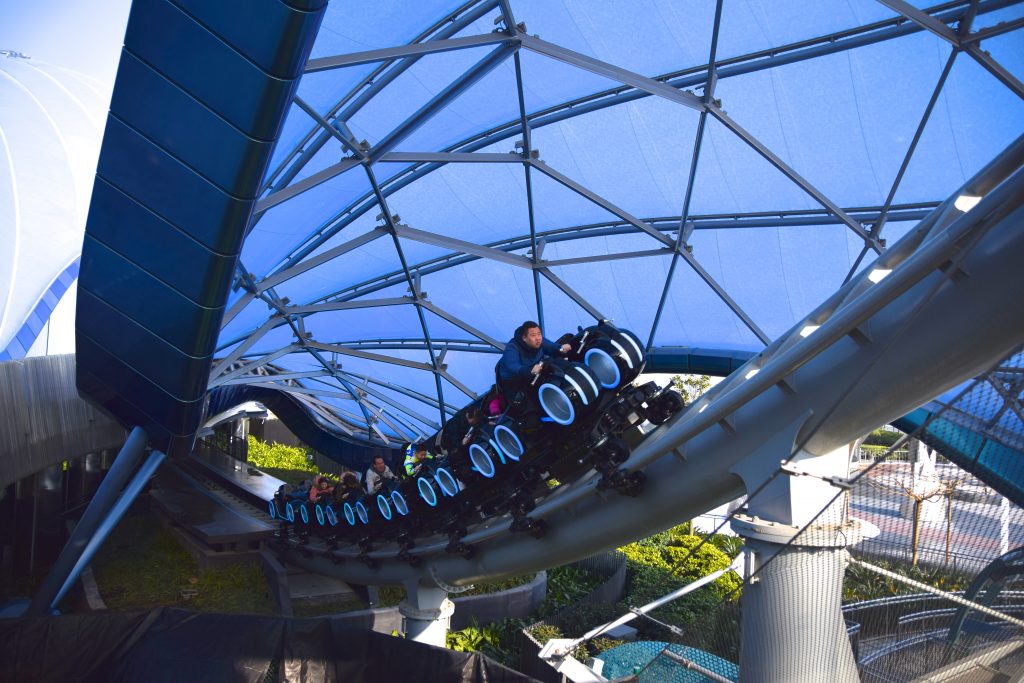 With the ability to run 7 trains at once, there are plenty of opportunities to immerse yourself in the spectacular looking attraction, before even entering the line. TRON: Lightcylce Power Run’s immersive experience starts way before you even get to the queue. 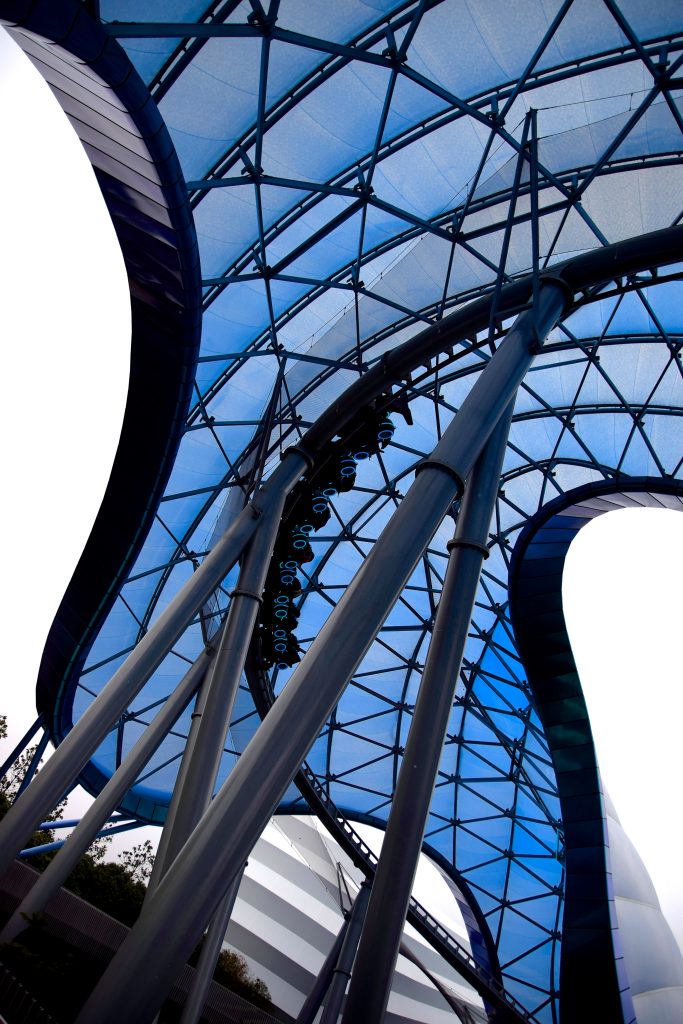 Once you do get to the queue, the experience increasingly gets better. The franchise chosen is not only perfect for a rollercoaster, it is such a spectacular and odd-ball science fiction approach, that the ride feels incredibly unique from the moment you look at it. The space theme is cool, but it has been done too frequently. The digital frontier. The Grid. That’s where it’s at. 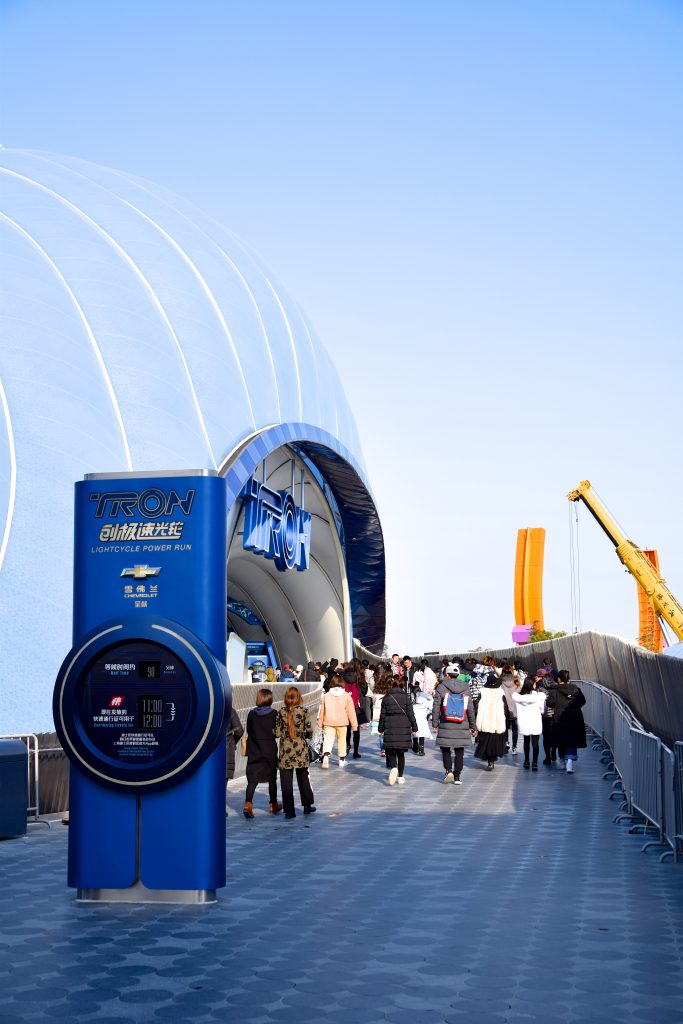 The queue is designed very carefully with lots of little sections that are all exciting in their own way. From the calibration room upon entry, to the glass sky-box pre-show, to the launch bay where the trains actually launch right below you. The music throughout the queue is the amazing Daft Punk TRON soundtrack, setting the tone for an amazing experience. 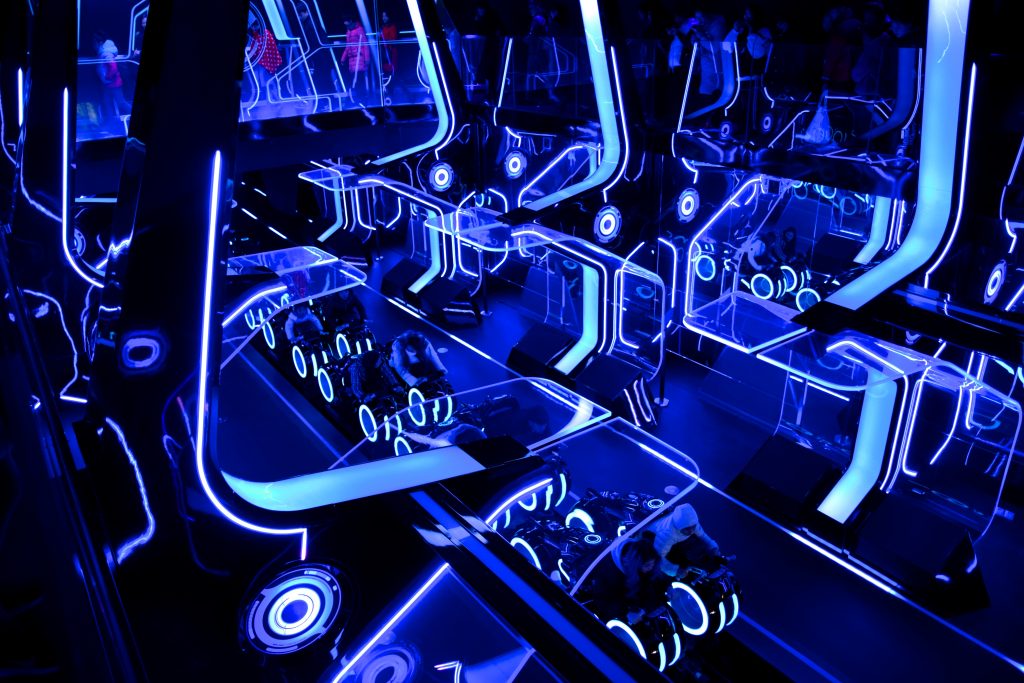 The queue feels minimalist at some points, which is beautiful for the TRON fan, as it combines some of the older TRON concepts with those introduced in the 2010 TRON: Legacy movie. Once you get to the station, the ride’s premise becomes blatant, you are about to fight to your death on lightcycles. 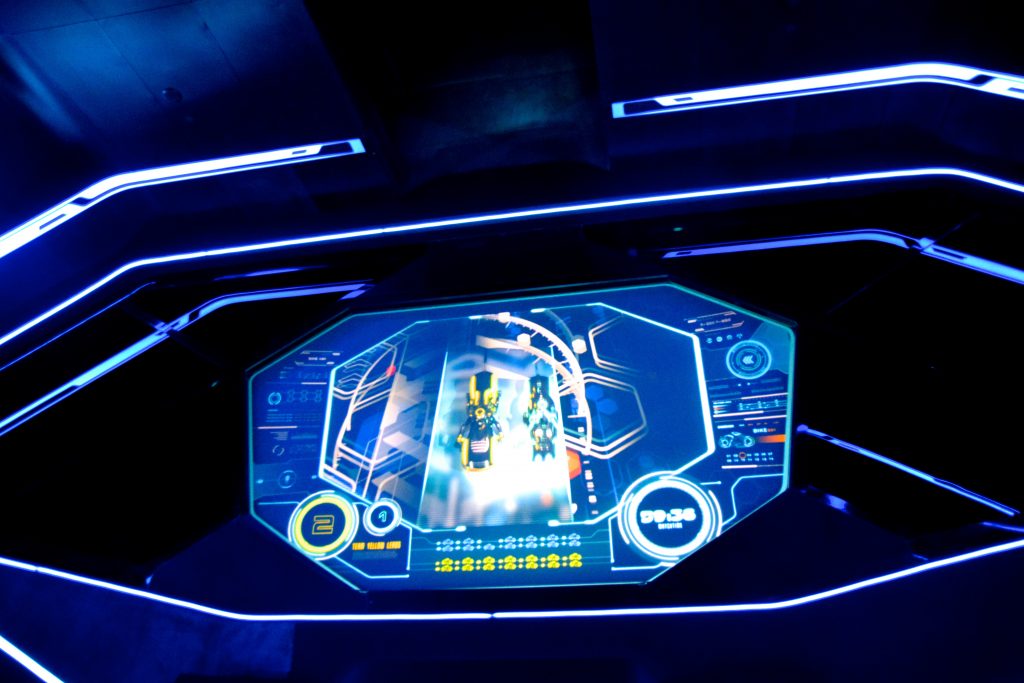 The screen in the station features some amazing pre-show videos further explaining what the TRON Power Run is all about. 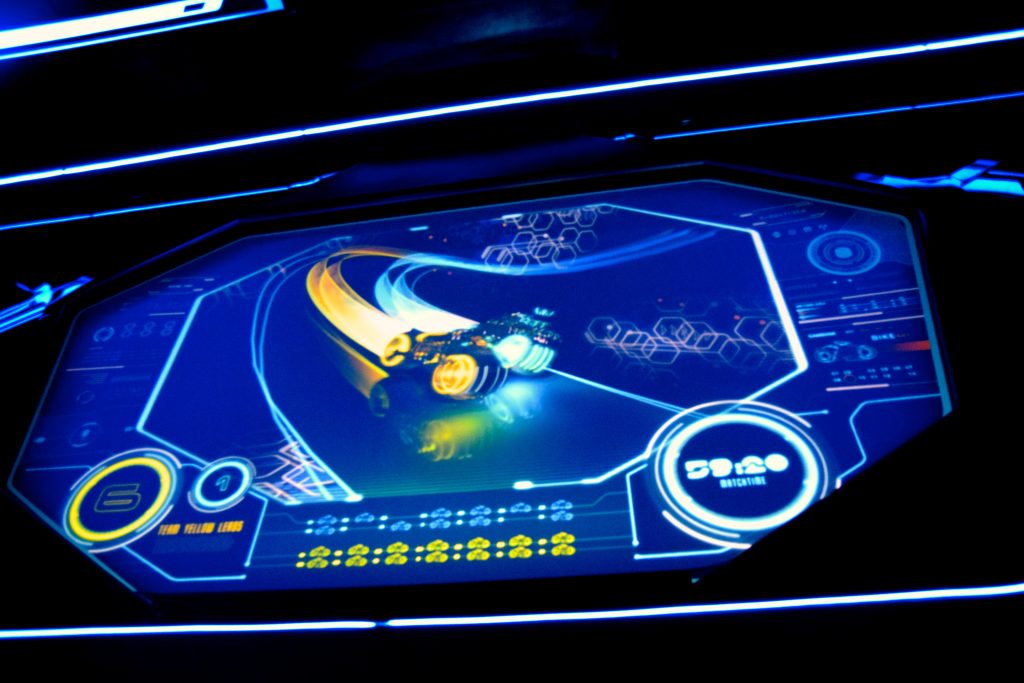 The station is massive and so beautiful, with the Daft Punk soundtrack in the background, and the slowly changing light glass panels throughout the boarding areas, this ride is nothing but visually pleasing the entire queue long. And you have not even ridden yet! 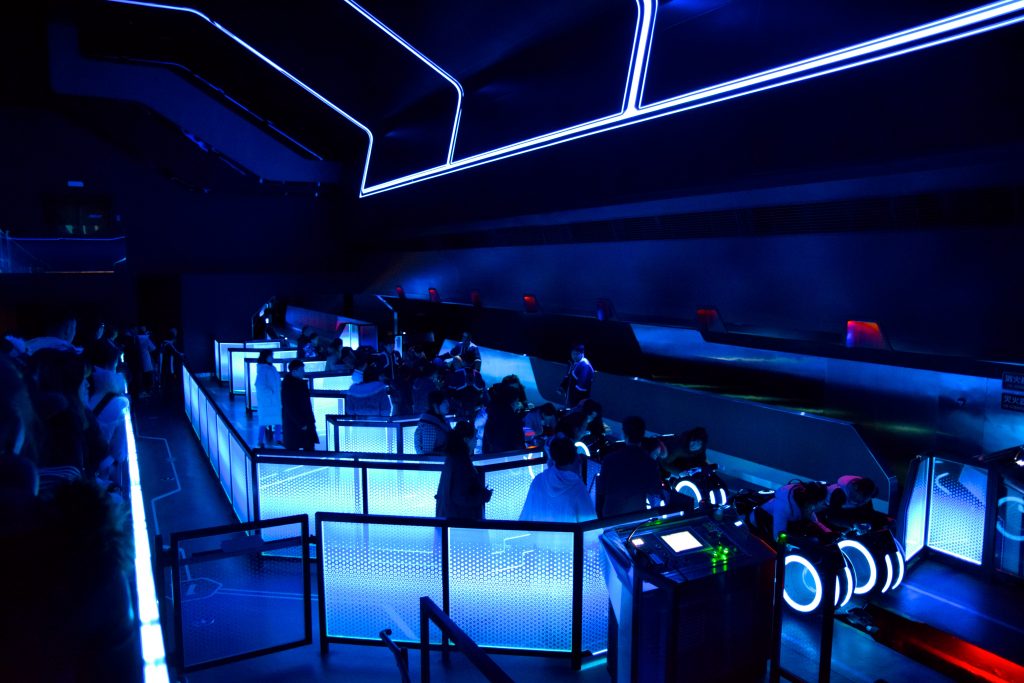 The lightcycles are incredibly comfortable, have a storage bin for your phone and glasses, and have amazing onboard sound systems. But that’s not all! These Vekoma trains also have several programmed light sequences that allow them to change colors several times throughout the ride. 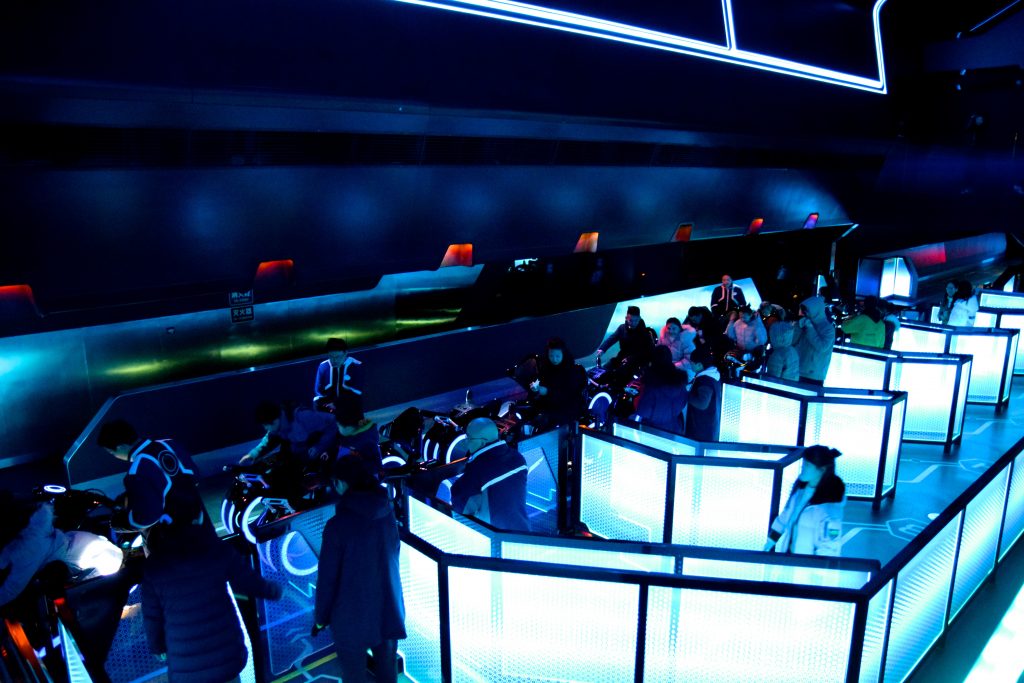 Let’s cut to the chase shall we? TRON: Lightcycle Power Run leaves the station with blaring sound system and moves towards the launch bay. Prior to launching you have plenty of opportunities to see the train (with you on board) in the many mirrors surrounding the launch bay. The heavy base vibrations of the sound system fill your body right before you launch at an impressive 60 MPH.

Once the train reaches its top speed it makes a giant wave turn inside the canopy that is so fast and refreshing, that you almost forget you are outside. This first half of the ride is very different from the second half inside. This makes the ride is a very well balanced experience where riders can find exhilarating thrills along with true immersion. 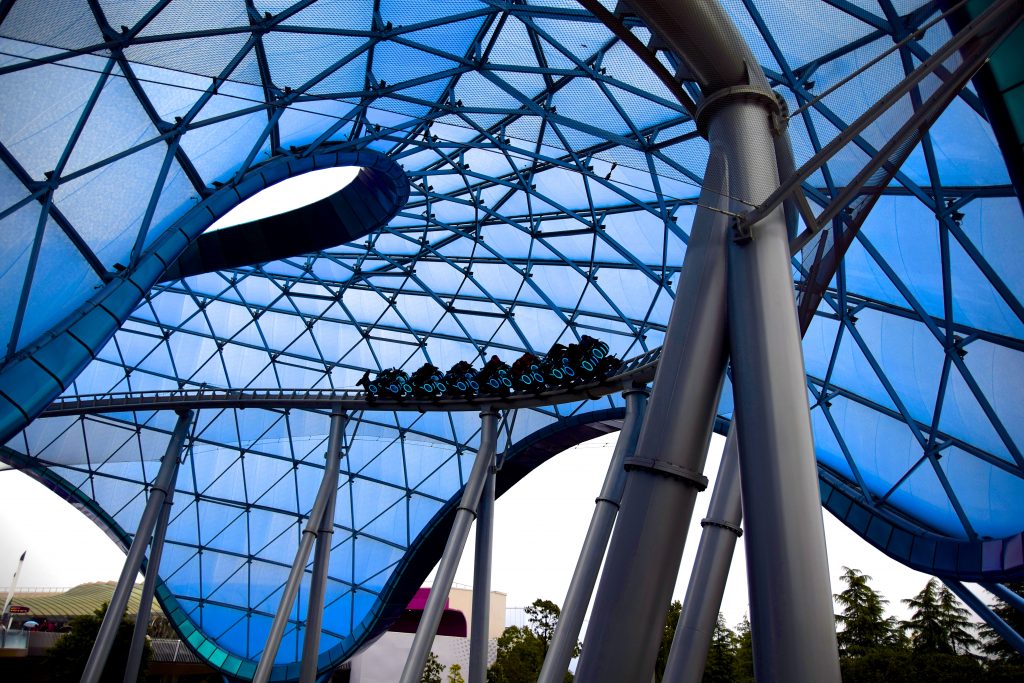 The position in which riders find themselves throughout the ride is much more impressive than any other launch coaster has ever done. The feeling created by riding on the lightcycles is unprecedented. 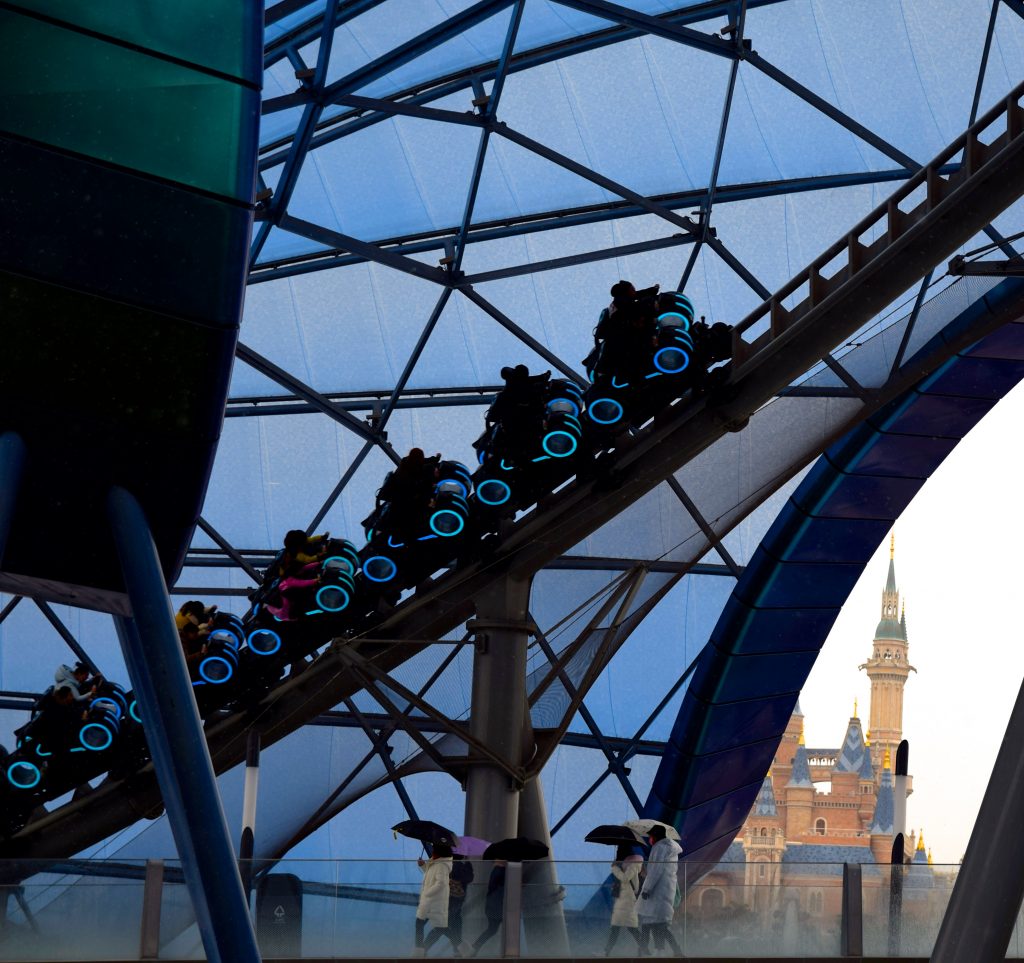 The inside of the show building on TRON: Lightcycle Power Run is a completely different type of ride experience than the outdoor section is. The moment you enter the show building at about 70 feet off the ground, the actual “Power Run” begins. The turns are small and fast, but incredibly effective for the wanted effect. The show building features several major effects, including a section where you race the orange train. The purpose of the coaster is to pass through the Power Run gates before the opposing team does. Whenever the train passes through these gates the lightcycles light up in a brighter blue and sound effects signify the successful powering up of the lightcycles. 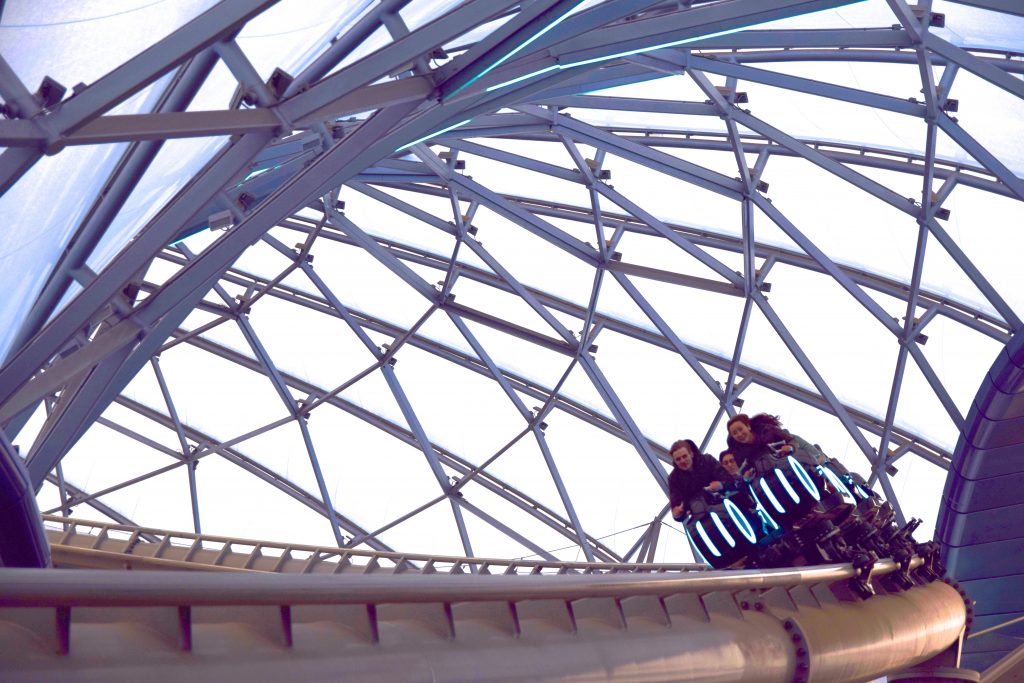 The ride is a tad short once inside, but it more than makes up for it with the amazing on-board and off-ride audio, the projections, use of mirrors and finale effects on the brake-run. By the time the train hits the brake run you are left wondering how an experience that immersive was possible on a roller coaster. 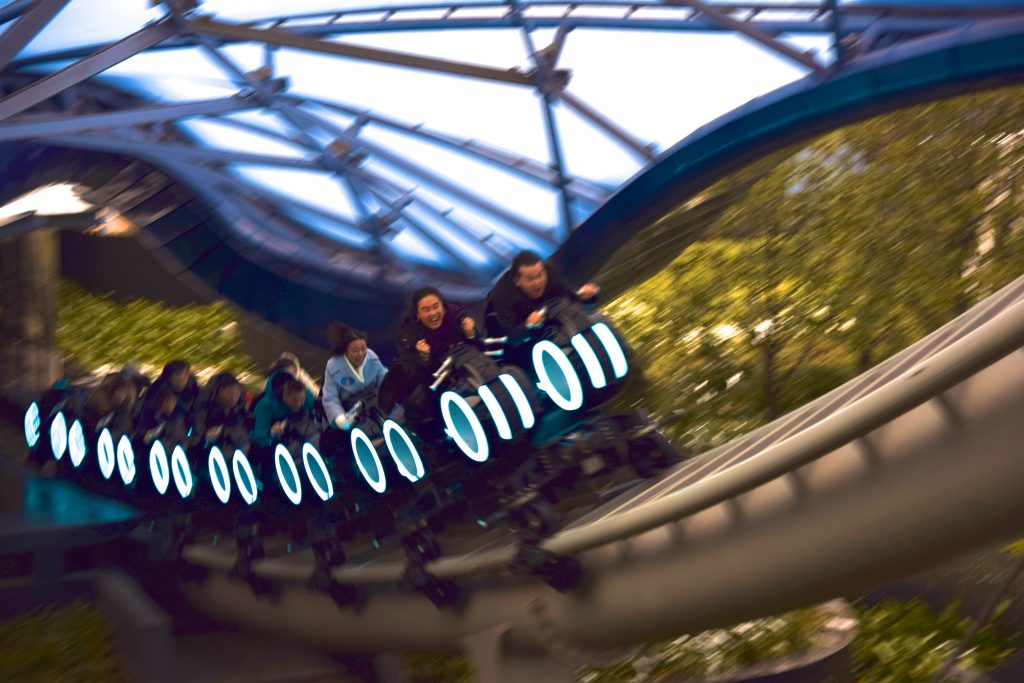 Two Rides in One. TRON: Lightcycle Power Run at Night

TRON: Lightcycle Power Run is amazing during the day, no doubt.  But it wouldn’t have been my favorite coaster if it weren’t for the amazing experience the ride delivers when it is dark out. 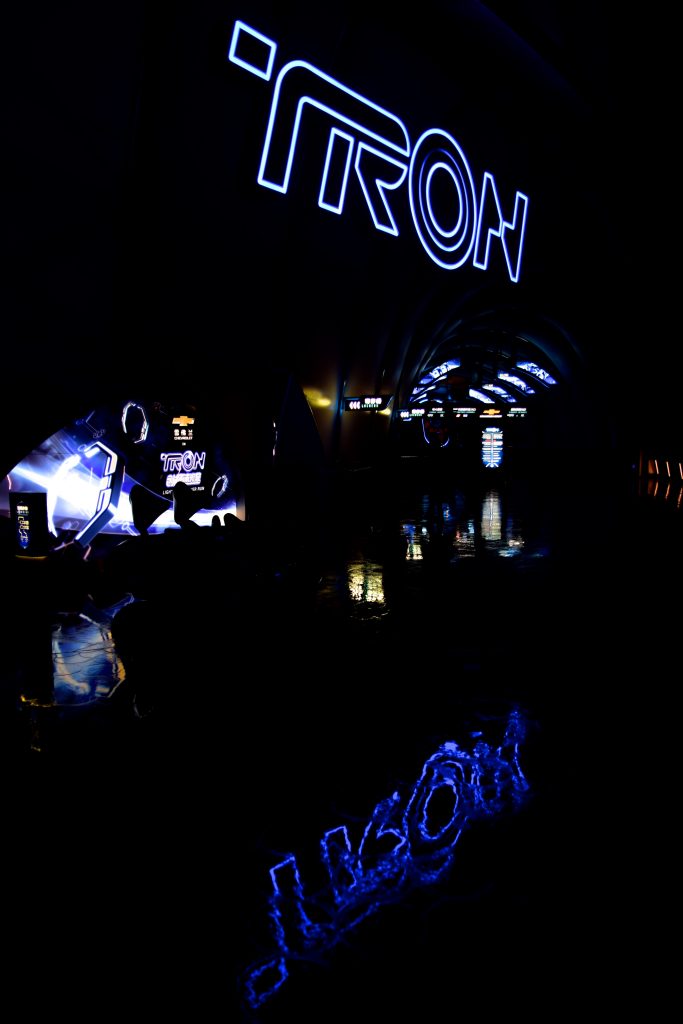 The TRON: Lightcycle Power Run canopy becomes part of the grid, as it changes colors and interacts with the trains as they pass through. It is blatant that the trains are best for a dark setting, and at night this ride comes to life more than I could have ever imagined. Standing below the canopy is such an experience at night, that even off-ride, TRON: Lightcycle Power Run is a can’t-miss attraction. 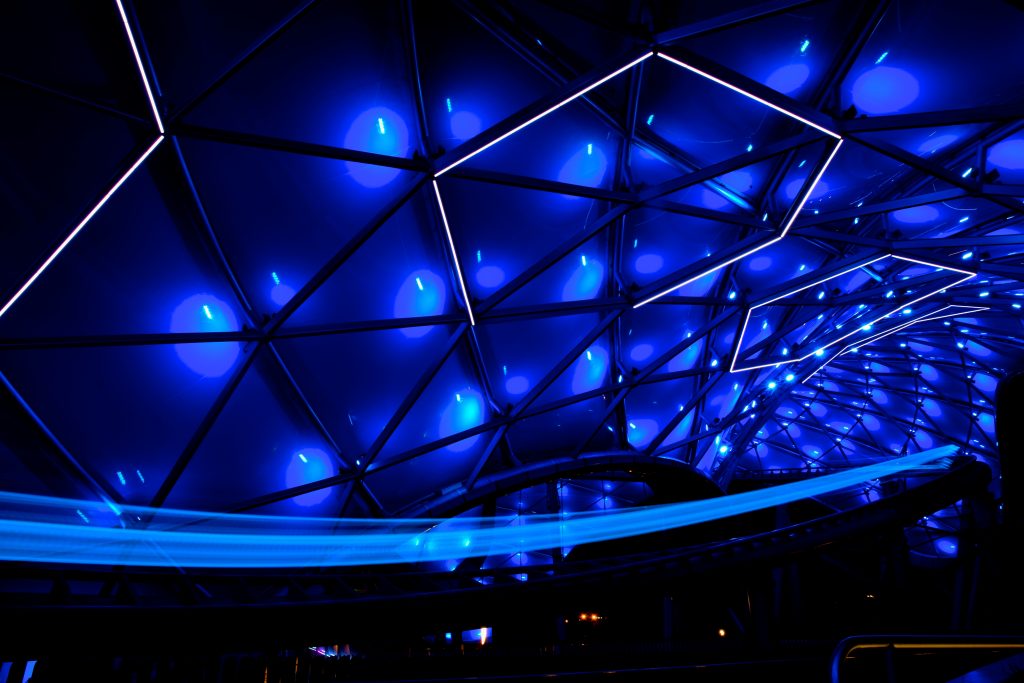 What’s even better than off-ride TRON at night? On-ride TRON at night. The lack of light pollution much improves the launch sequence experience, as well as the re-entry of the show building. The lightcycles fly through a colorful canopy as you see the hexagons in the ceilings appear and disappear thanks to the amazing light show that interacts with the trains. It is about all you need in life. 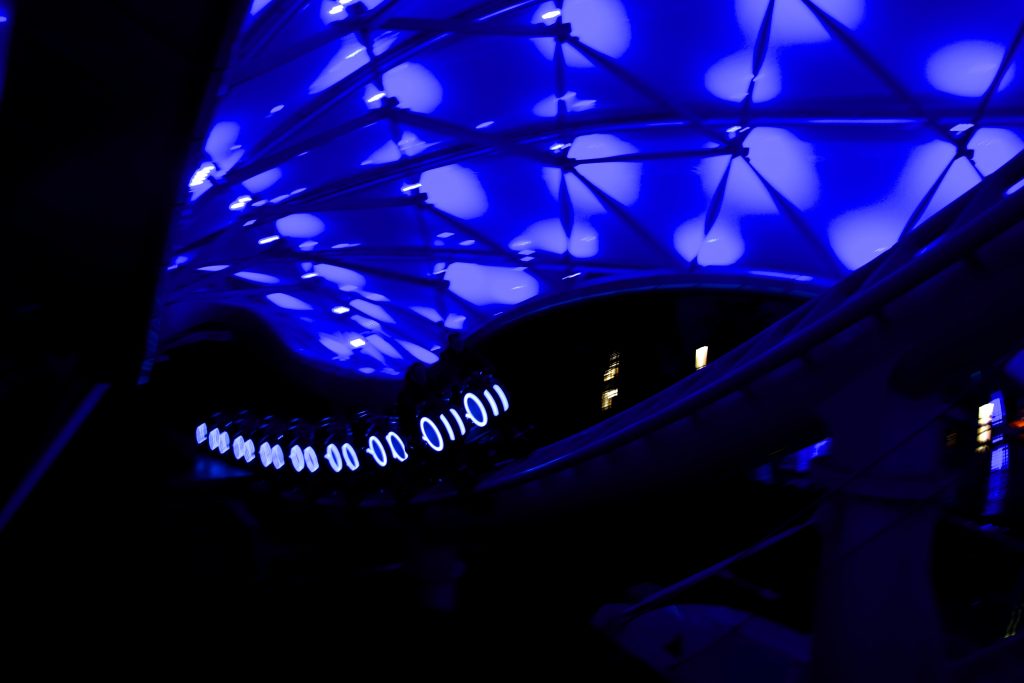 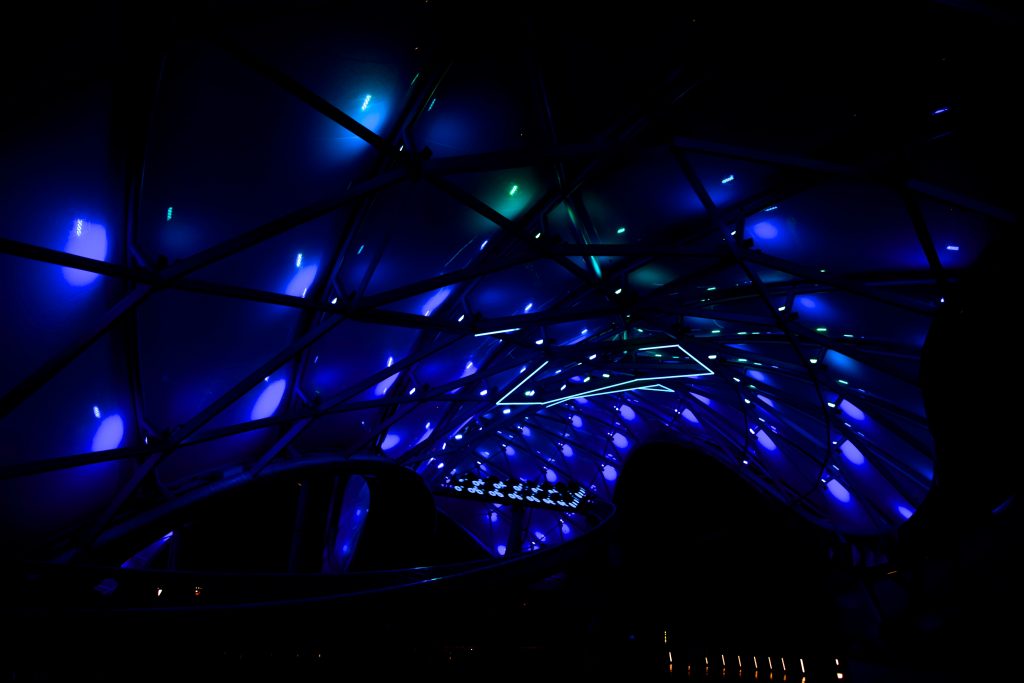 One of the reasons I am so in love with TRON: Lightcycle Power Run is its ability to offer so many different kinds of experiences in one ride. From an amazing walk-through queue, to an out door thrilling coaster section, to an indoor immersive coaster experience. On top of that the ride is a completely different experience at night, and manages to deliver over and over and over. 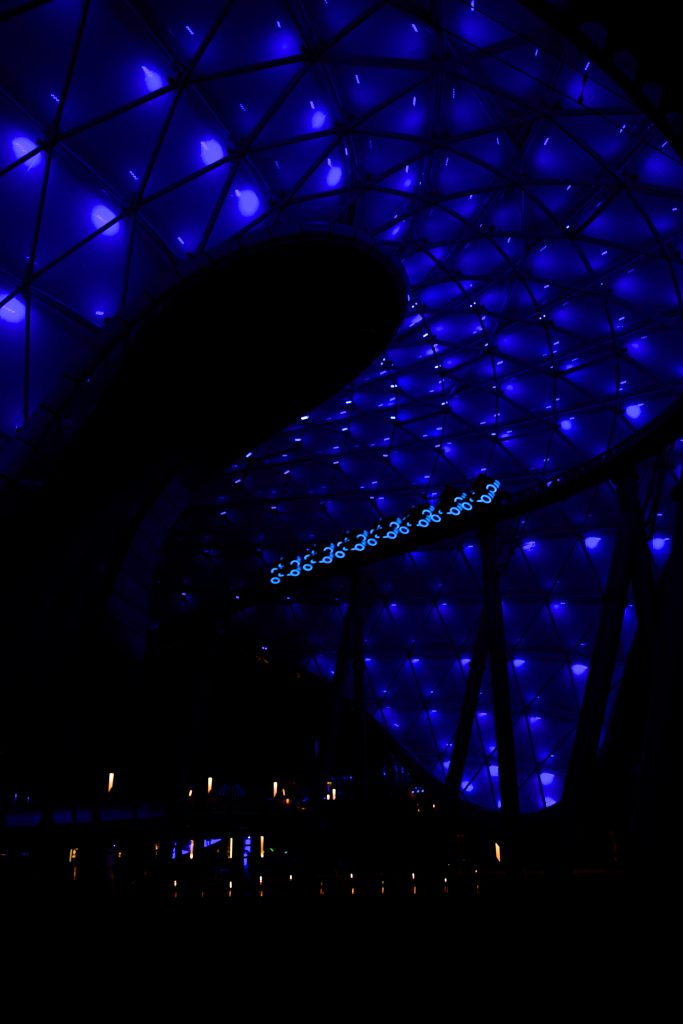 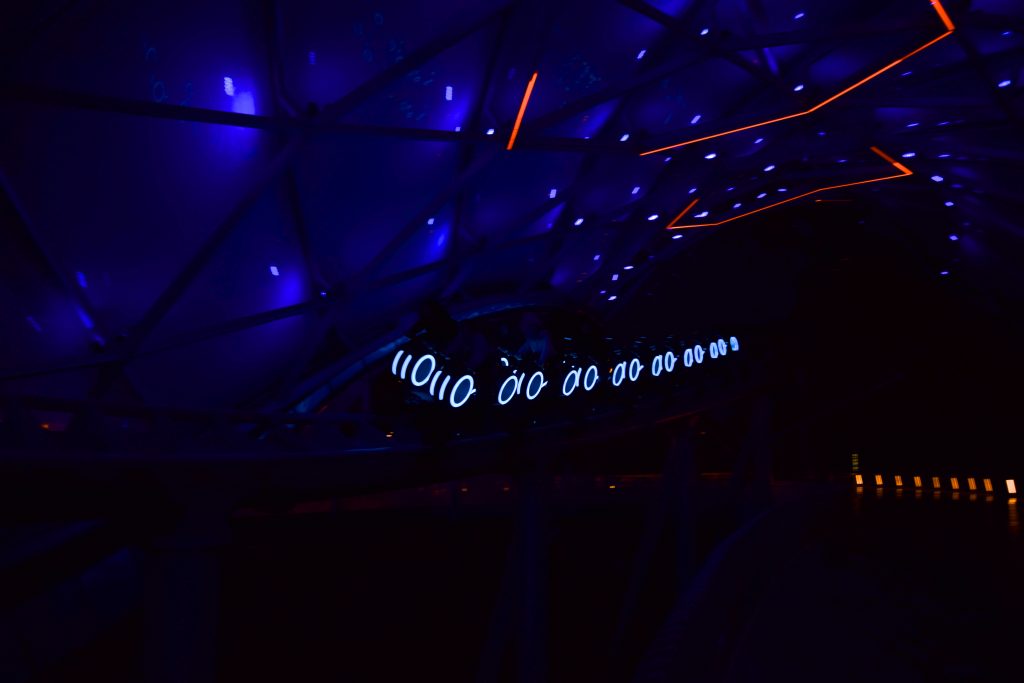 Why TRON: Lightcycle Power Run is my Favorite Coaster

So why is TRON: Lightcycle Power Run my favorite coaster? The experience of TRON starts way prior to even entering the queue, the sheer size and impressive look is an attraction in and of itself. The queue is beautiful, has several great pre-shows, and is a perfect lead-in to the ride experience.

The launch is significantly fast. Riding in the motorcycle position, launching at speeds of 60 MPH is just exhilarating. The coaster combines a high-speed thrilling coaster section with a milder indoor section that is just visually stunning. The ride thus manages to create much better rounded experience than most coasters are capable of delivering.

The immersion of the ride is beyond what anyone could have imagined, with several amazing effects throughout the ride. The ride’s lightcycle coaster trains are comfortable, efficient, very advanced, and amazingly beautiful.  TRON: Lightcycle Power Run is purely spectacular. Out of this world fantastic and so well executed, and therefore is my favorite roller coaster. 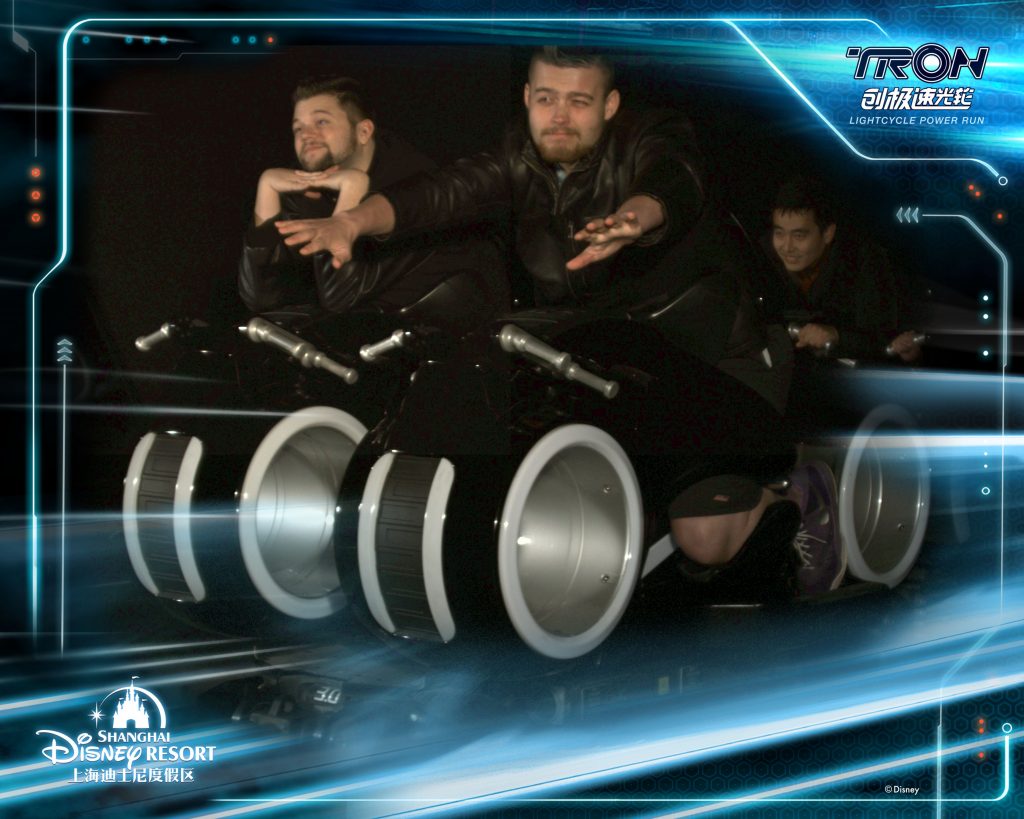 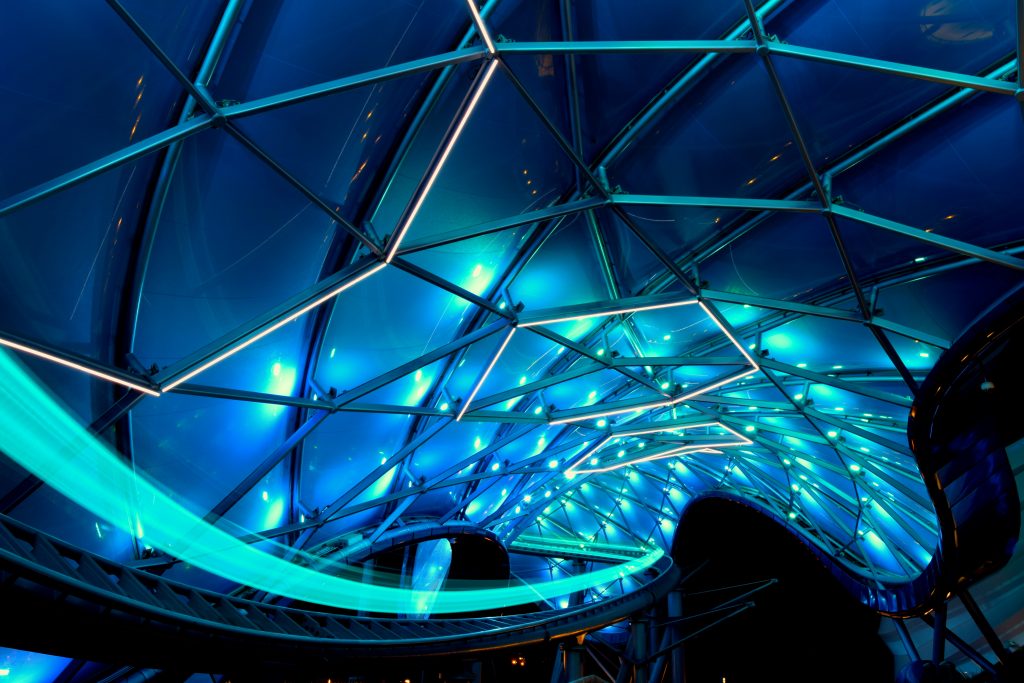 7 Replies to “The World isn’t Good Enough for TRON: Lightcycle Power Run, but Walt Disney World Might Be.”