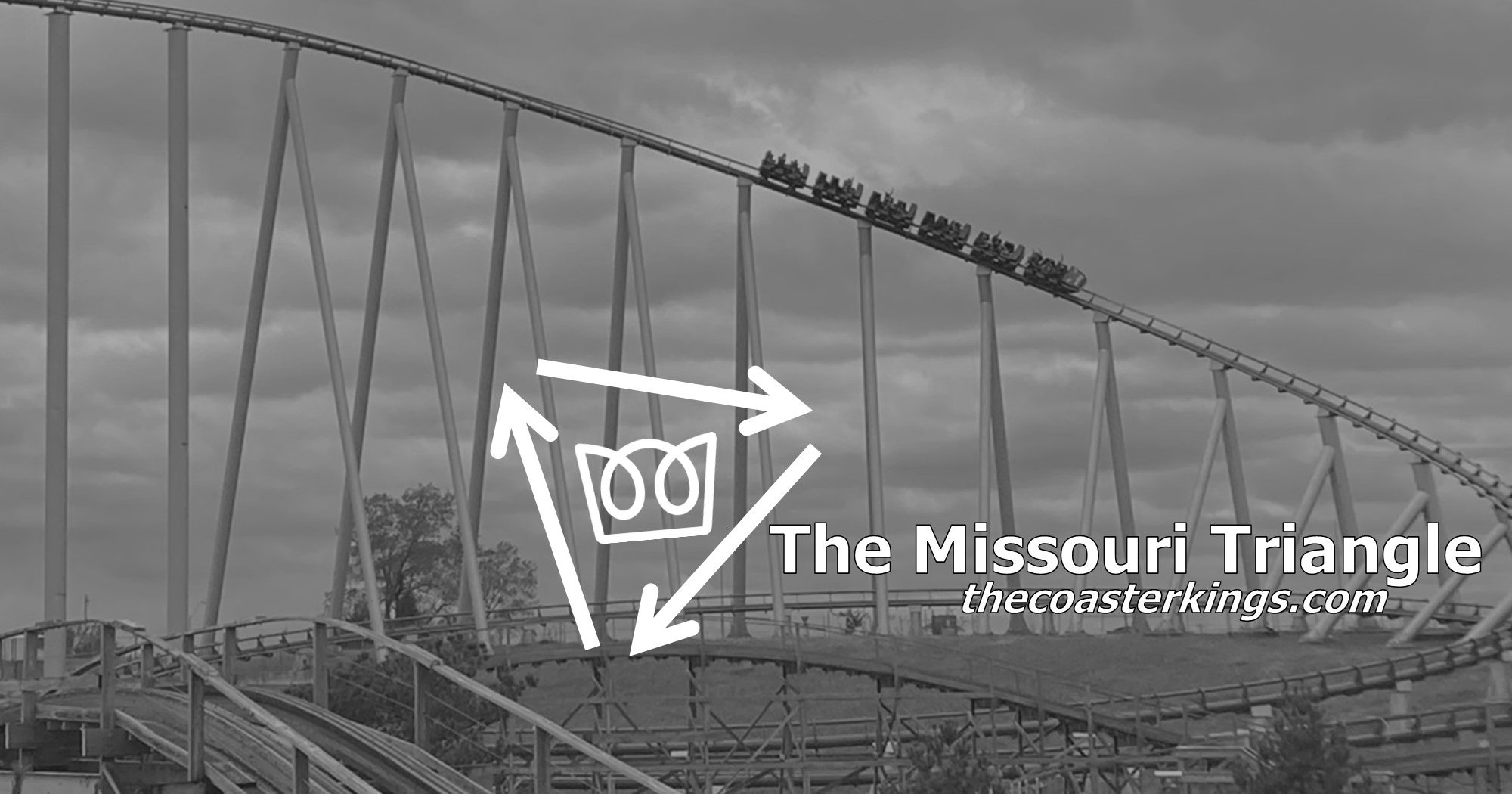 In part one of this series my friend Pete and I started our Missouri trip with an amazing Thursday at Silver Dollar City. Friday’s park was one of Cedar Fair’s mid-tier parks, Worlds of Fun. Worlds of Fun opened in 1973 at the height of the regional park boom. Despite some dramatic changes since the park’s 1995 sale to Cedar Fair, Worlds of Fun still very much feels like a product of the 70s. Loosely themed to Jules Verne’s Around the World in 80 Days, the park is divided into various international regions such as Europa, Africa, and the Orient. These areas are more distinguished than I expected and are united by a streamlined 70s aesthetic. For coaster enthusiasts World of Fun features some impressive coasters including the tallest full-circuit coaster in the state, Mamba and the well regarded GCI woodie, Prowler. The biggest question for the two of us was how did this Cedar Fair property compare to it’s Ohio siblings.

We left our hotel early with the intention to grab a quick coffee and breakfast before driving to the park. However, the lines at all the nearby coffee joints were excruciatingly long so, we made the decision to get something once we got in the park. The Words of Fun online map lists a Caribou Coffee so we figured it would be easy enough to grab coffee and a pastry there. We found a parking space and made our way down a long path towards the park’s entrance area, Intentional Plaza. The park’s entrance gates were remodeled in 2017 and feature a modern, Victorian, world’s fair style. This entrance was originally the parks secondary entrance with a primary one located in the park’s Americana section. Also located off this entrance is the water park Oceans of Fun, which is included with the price of admission. The parks gates opened a little before the 11 am opening time and with coffee still on our minds we made our way to our first coaster of the day, the Gerstlauer Spinning Dragons.

Missouri is home to two large scale Gerstlauer spinning coasters with Spinning Dragons being one of the first of this model installed in 2004. I recommend riding early in your day as the four seat trains do not offer the highest capacity and this family friendly ride is very popular. One of the initial reactions I had to the park was how clean and polished everything is and also how much of the around the world theme is still present. The Orient section of the park has always been the smallest and currently features two attractions Spinning Dragons and the classic round-up ride Bamboozler. Like much of the theming in the park, the Asian look is very much rooted in the 70s. It is home to what may be the only appropriately placed Panda Express at a Cedar Fair park, some lovely landscaping, and water features. Still on the hunt for a cup of coffee and some breakfast we headed over to the adjacent Americana section. This area originally acted as the parks main entrance plaza and it shows. A row of shops border a charming plaza which now leads to SteelHawk (the parks Mondial WindSeeker) and Patriot (a large-scale B&M invert). Caribou Coffee was listed among the shops but when we approached it it was decidedly closed. The nearby Front Street Tavern bar was open so we grabbed a quick energy drink from a friendly barkeeper to get our caffeine fix for the day. Unfortunately closed eateries seemed to litter the park while still appearing on the park map. It seems Worlds of Fun is experiencing the effects of the labor shortage and choosing to trim some of their dining offerings. We finally found an open Auntie Anne’s Pretzel in the Africa section of the park, but they didn’t have any sweet pretzels ready so we continued up the hill towards Mamba.

Like other Steve Okamoto designed Cedar Fair Morgan Hypers, Mamba suffers from comparison to the cosmetically similar Magnum XL-200. This was my first Morgan hyper coaster and Pete’s second after Steel Eel. We both found it an enjoyable but somewhat lacking ride. The first half of the ride is very strong consisting of a 205ft drop, followed by a 185ft airtime hill, before rising into a 580 degree downward helix. This massive helix is an absolute highlight and features some amazing head choppers from the supports above. After the helix turnaround the train rises into a mid course before going into a series of five camel back airtime hills. It’s at this point where the ride really seems to lose steam. These hills provide some slight airtime but far from anything like the sharp ejector you find on Magnum. In our minds the first half of Mamba was great but second just doesn’t do enough to really make it an especially memorable coaster. After Mamba we got our obligatory ride on the park’s Vekoma Boomerang which was running great and probably remains the most intense coaster in the park. By this point our lack of breakfast was making both of us grumpy so we grabbed a pretzel and headed deeper into Africa to find Prowler. This powerful GCI woodie opened in 2009 and remains the park’s newest roller coaster. After our initial rides we both described it as Mystic Timbers with laterals. While Prowler’s layout is decidedly more out and back than twister, it features a few turns and terrain moments that really distinguish it from it’s oft-compared Kings Island brother. Prowler also benefits from a location deep in the woods where the park’s Arrow Safari car ride once ran. I have a hard time ranking it among the other GCI coasters I’ve ridden but it has great pacing, strong airtime, and is fun from start to finish.

With two station wait rides on Prowler secured we wrapped back towards the parks entrance into Scandinavia. Scandanavia is home to the park’s 1973 Arrow flume Viking Voyage. Although small in scale, Viking Voyage is notable for its custom viking boats which remain as charming as ever over 45 years since their debut. With my vintage Arrow flume credit secured we made our way back to Americana and the two remaining major coasters Patriot and Timberwolf. Patriot is a large scale B&M invert with four inversions which opened in 2006 as somewhat of a peace offering for the 2003 removal of the park’s classic Arrow custom looper Orient Express. While I personally would have preferred an Arrow with interlocking loops, Patriot proved far from the forceless snooze that some enthusiasts characterize it as. Its 123 ft drop is exciting, inversions are forceful, and features a few non-inverting turns and transitions that bring a bit of that B&M snappiness that everyone loves. Nearby is the parks 1989 wooden monster Timber Wolf. Timber Wolf is of only four remaining Dinn Corporation woodies and one with quite a positive reputation once topping the lists of best coasters in America. While it still has some rough patches, Timber Wolf has benefited greatly from a re-tracking project by GCI that includes the 2018 replacement of the rides helix with an over banked turn. Overall the ride features some great intensity and pacing though it certainly still has the roughness one expects from a Dinn woodie. With the last coaster credit secured we got a couple more rides on Mamba and Prowler before heading out of the park around 3 pm.

Worlds of Fun is a pleasant park but one which did very little to distinguish itself from any other parks we have been to. I think the fact that we completed the entire park in a little more than four hours really demonstrates the park’s lack of depth. While I’m sure the included with admission water park helps round out a day at Worlds of Fun, it still feels like something is missing. The park’s strength is the integrity of its original design and the charming atmosphere it provides, even without its Schwarzkopf Jumbo Jet or Arrow loopers that classic energy is present. You can tell this park is an institution for people in the Kansas City area and the park does a great job celebrating that with merchandise for classic rides like the Zambezi Zinger. The addition of a unique world class coaster or dark ride would do a lot to round this park out.