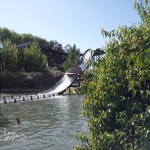 Although some of the most famous and talked about drops are found on massive roller coasters or drop towers, there’s something uniquely thrilling about a relatively unrestrained drop that ends in a splash, especially on a hot sunny California day. This list will be counting down the top five drops found on water rides throughout our wonderful state of California.

5. Pirates of the Caribbean

Disneyland Resort is home to some of the best water rides on the planet. Although much of this is due to the intricate theming, sometimes a guest just loves to be left screaming. After a peaceful boat ride through a tranquil bayou, riders approach a pitch black opening. Everyone is told there’s no turning back, and just like that, the boat drops suddenly in the pitch black. Although Disney is not to keen to dispose the actual height of the drop, those who have ridden it can vouch for its size. In addition, it is quickly followed by another smaller drop into a beautiful cavern sections where the peaceful journey resumes. The contrast between the elements before and after this drop in combination with the lack of light and its apparent size made Pirates of the Caribbean’s drop a must have on this list. 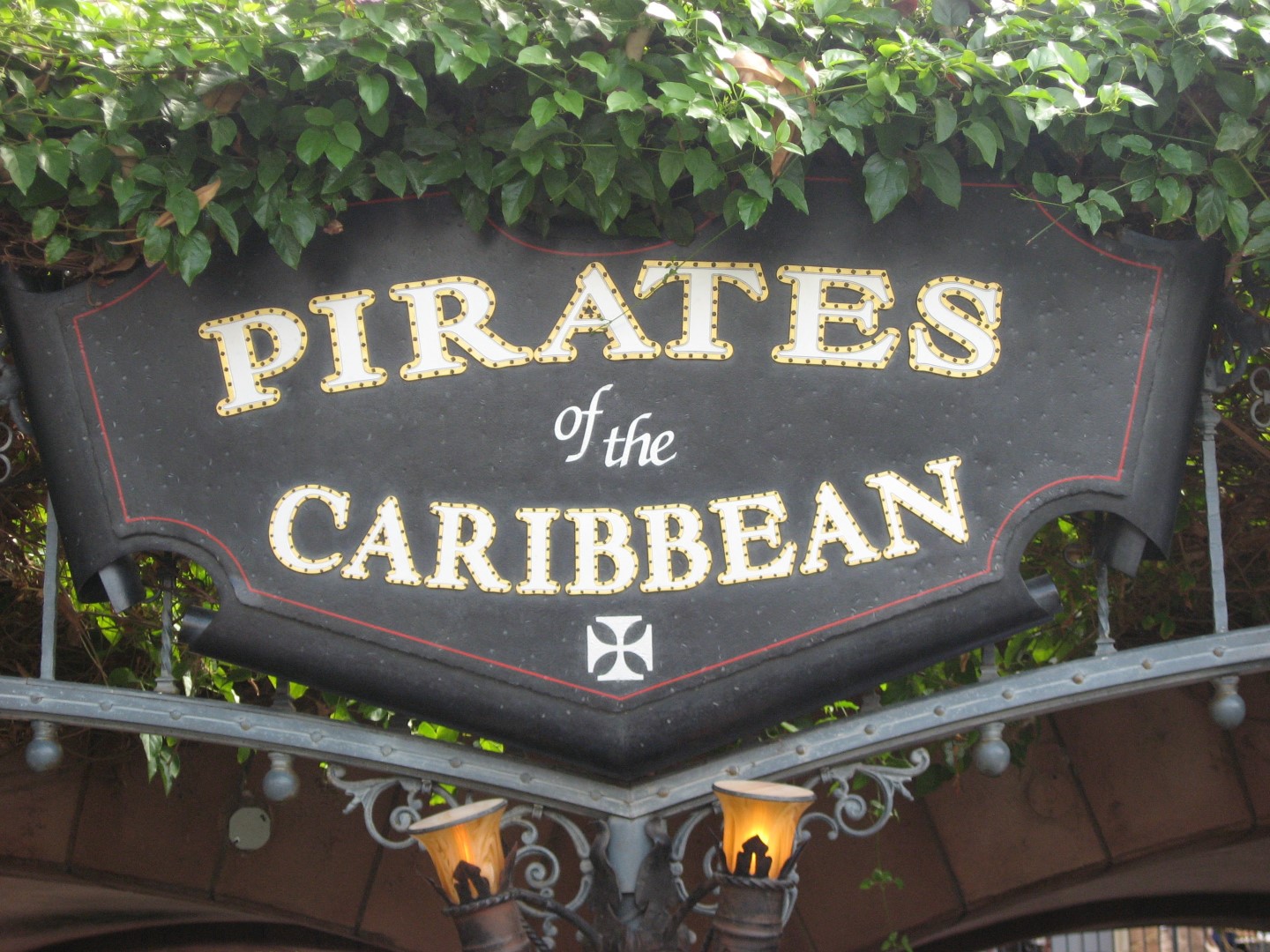 Timber Mountain Log Ride is one of the most famous Arrow log flumes, and deservedly so. At the ripe old age of 47 years old (1969), one would think there wouldn’t be too much of a thrill factor to this classic. The ride is certainly a mesmerizing, cozy, and well themed experience, but the final drop really caps it off. After ascending a lift hill, riders are warned that they are in a blasting zone. As the log emerges from the mountain, you’re quickly greeted by a wonderful view before descending the 42 foot drop with no restraints of any kind into the splash basin below. Although it’s not the longest or steepest of drops, the build up, and the overall theme and look of the ride really give this classic a special finale, thus its spot on this list. 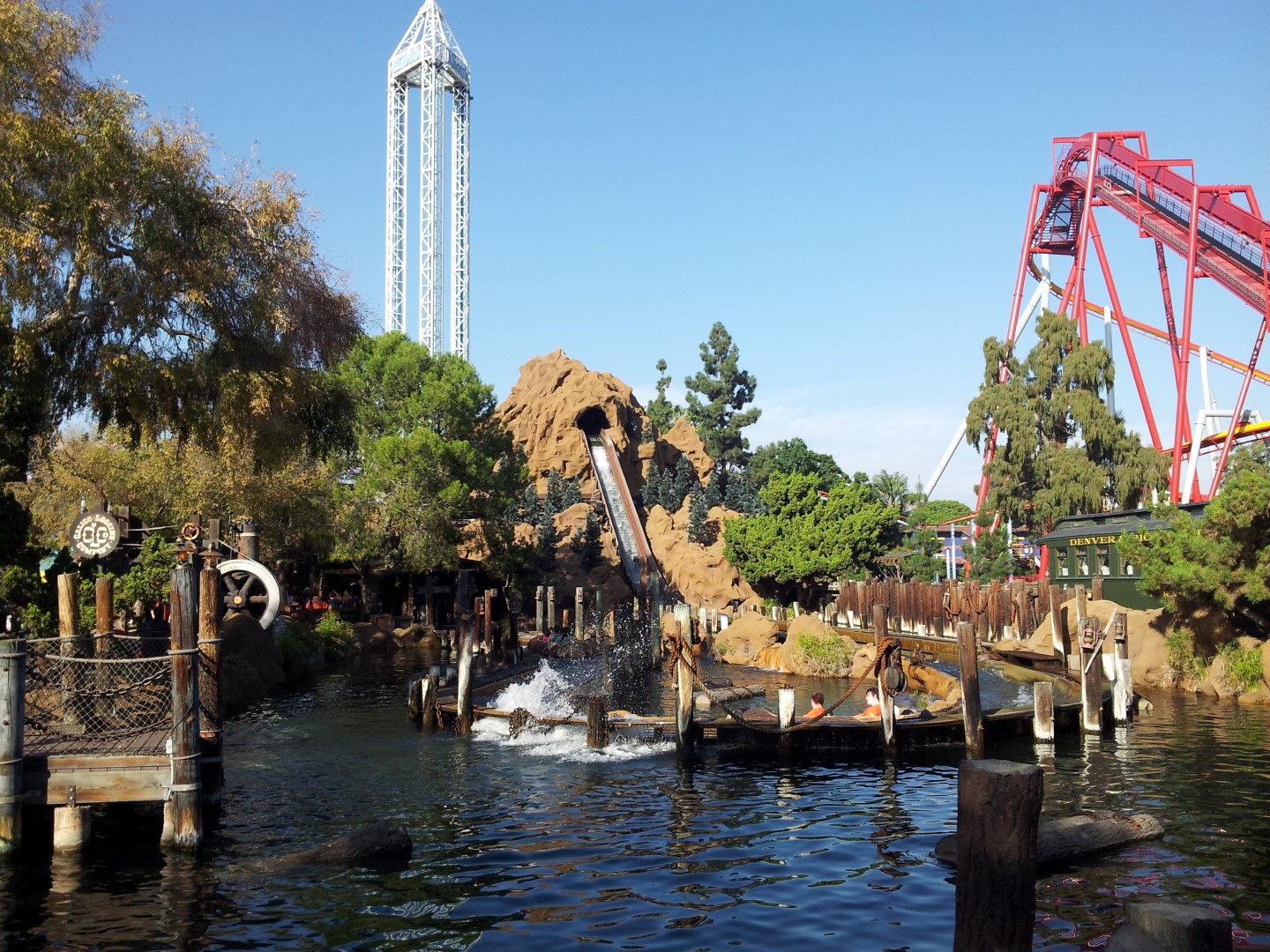 We weren’t kidding when we said that Disneyland Resort was famous for its water rides and Grizzly River Run is no exception. This Intamin and Walt Disney Disney Imagineering collaboration brings the best of both companies, and both worlds. The surrounding rock-work and artificial landscapes are nothing less than the Disney gold standard, but what really sets this rapids ride apart is the drops sprinkled throughout the layout. The early first drop is somewhat short, and not too eventful, but the final drop under the bridge is really something special. Although it’s not too much over 20 feet, the raft is designed to spin during the drop and it does quite a bit. In addition, the bridge above showers riders with leaking pipes before they splash down at the bottom. The uniqueness, wetness, and intensity associated with this drop earned it the number three spot in our book. 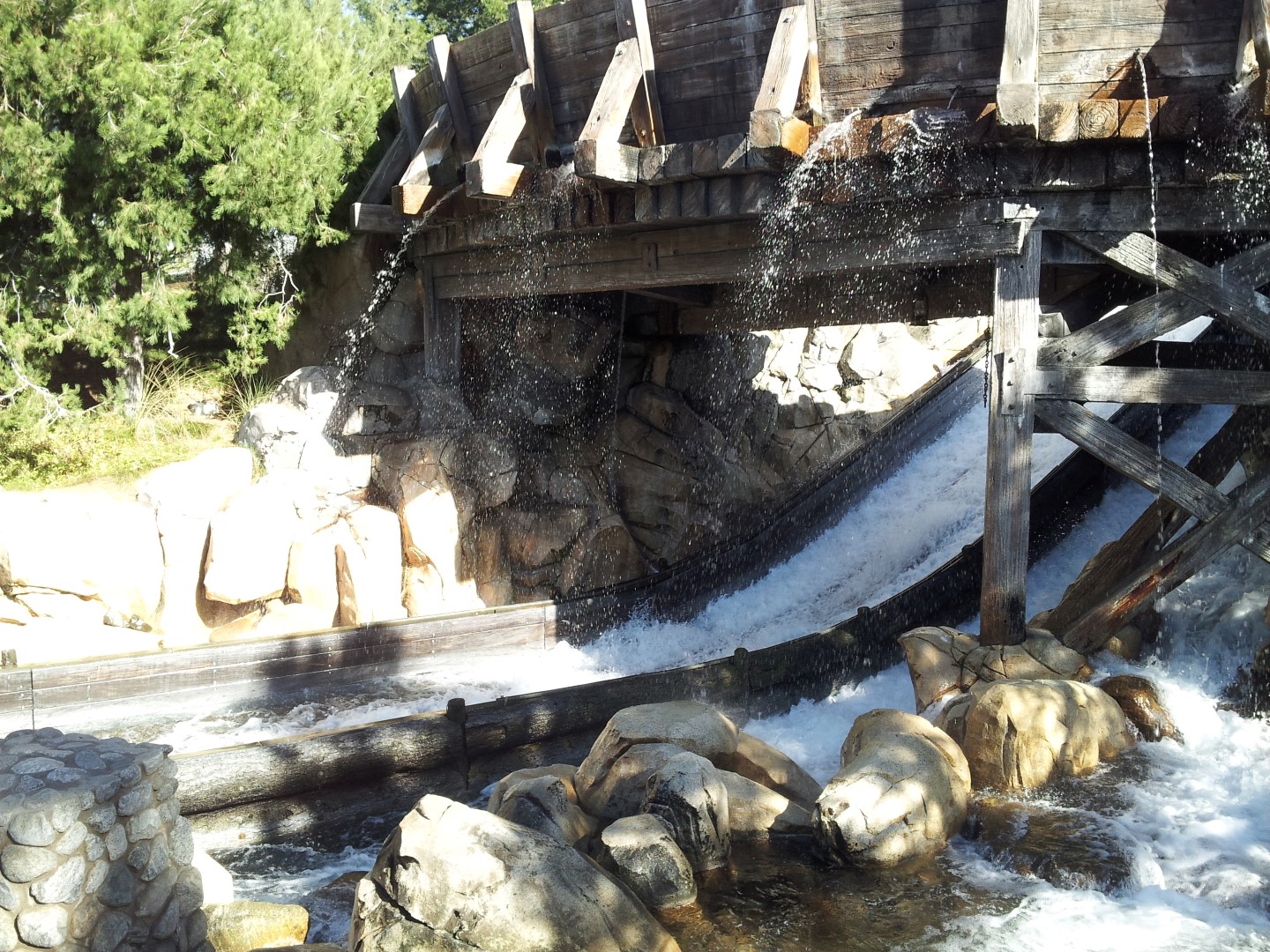 Perhaps the most talked about entry on this list Splash Mountain certainly earns its namesake, as it is a large a well themed mountain, and it sure does end with a big splash. Although there are three drops throughout the course of the ride, we are talking about the last and largest of course. After ascending the indoor lift hill in which riders see the captured Brer Rabbit, the log emerges into the open and drops 52.5 feet at a 47 degree angle whilst barely missing a massive pile of thorns. When the log reaches the bottom it creates a very large splash, which soaks every single rider. The significant height, steepness, theming, and splash that this drop offers, as well as the fact that it comes at the back-end of an excellent ride, makes this one of the best in the state. 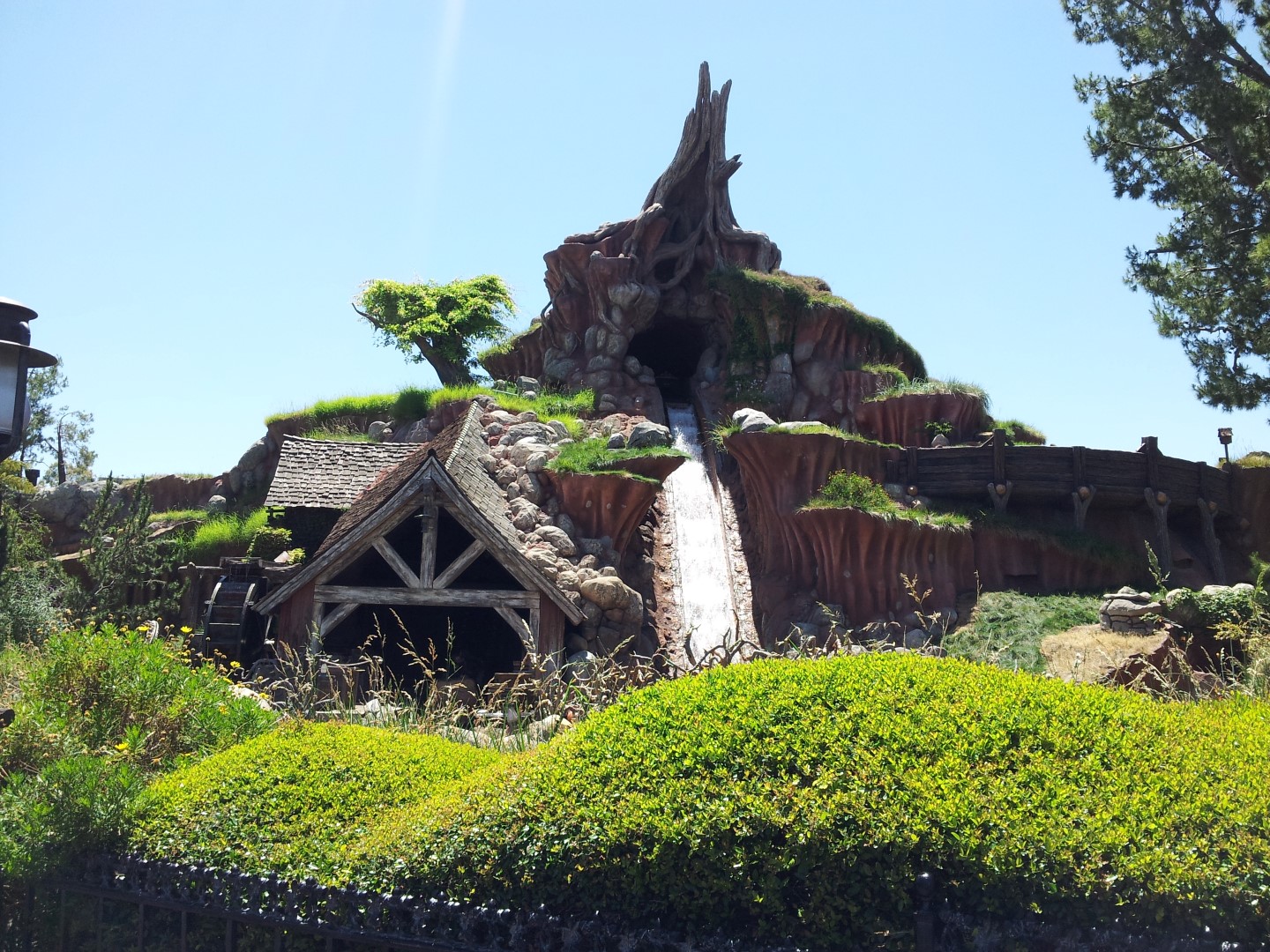 Jurassic Park at Universal studios Hollywood is one of the most expensive attractions ever built, costing over 100 million dollars. Where did that money go you ask? Well in addition to some amazing animatronics and environments, Vekoma built a masterpiece of a drop. When it opened on June 21, 1996, the 84 ft drop was something never seen before on a ride of its kind. It was the tallest drop on a water-ride up to that point in time, but height isn’t all it delivers. This drop boasts an angle of 51 degrees and reaches speeds of almost 50 miles per hour. Possibly the most spectacular part, as the boat begins to drop after the climactic countdown sequence, a life size T-Rex animatronic bursts out of a waterfall and roars right in the face of riders before they plunge down to earth. If that doesn’t convince you of this drops magnificence, we don’t know what will. (Check out our 5 Jurassic Park the Ride facts you likely didn’t know!) 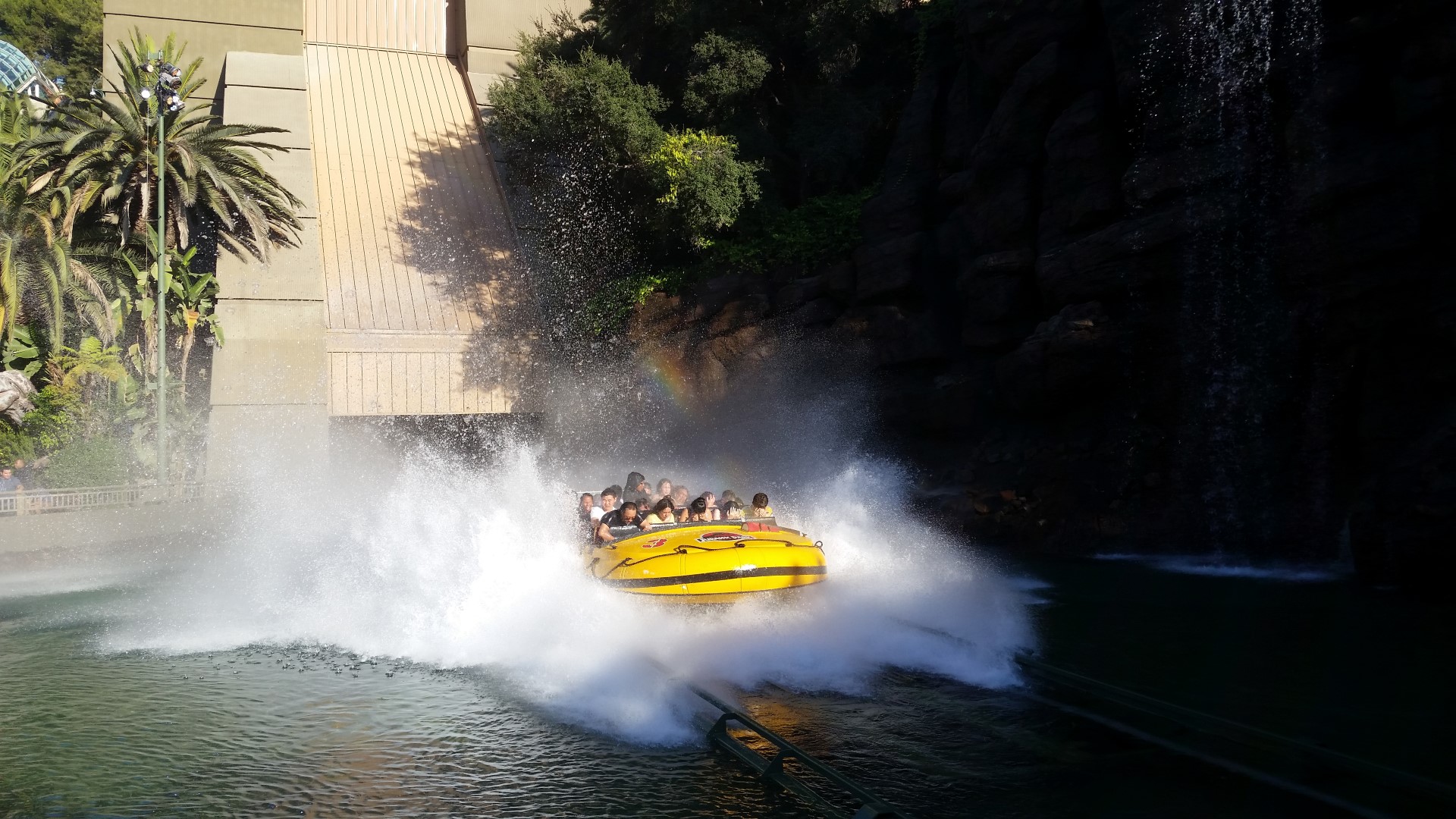 Thank you for checking out our newest article! So, what’s your favorite drop on a water ride? Comment below and let us know!

2 Replies to “The 5 Best Water Ride Drops in California”