This time my work brings me to St. Louis, where Sean and I were able to enjoy what is arguably the most underrated Six Flags park.

Coaster wind-chill was below freezing, but that didn’t stop us from having a Freeze-tacular Six Flags day! 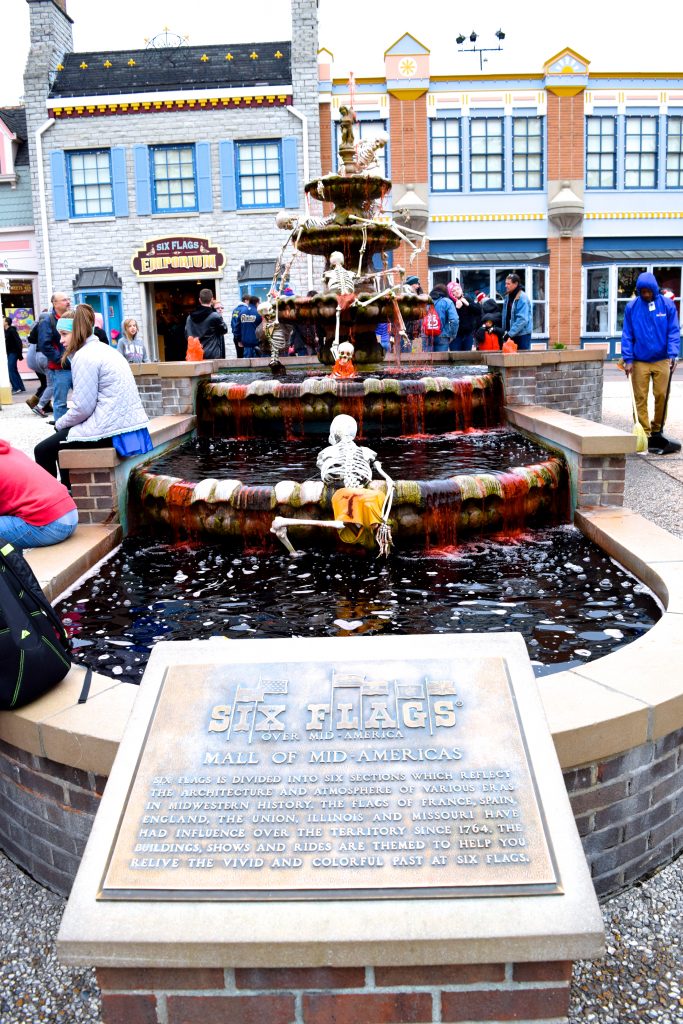 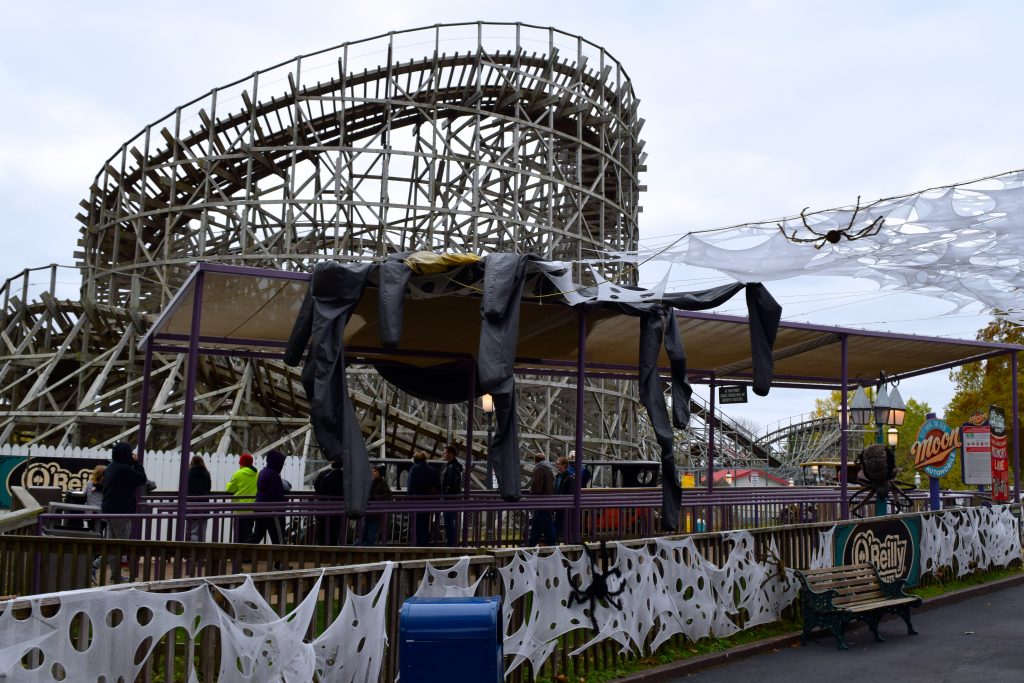 St. Louis isn’t the quite the game-changing cultural center it was in the late 60s, but they still have a lovely regional park to hang their hat on. 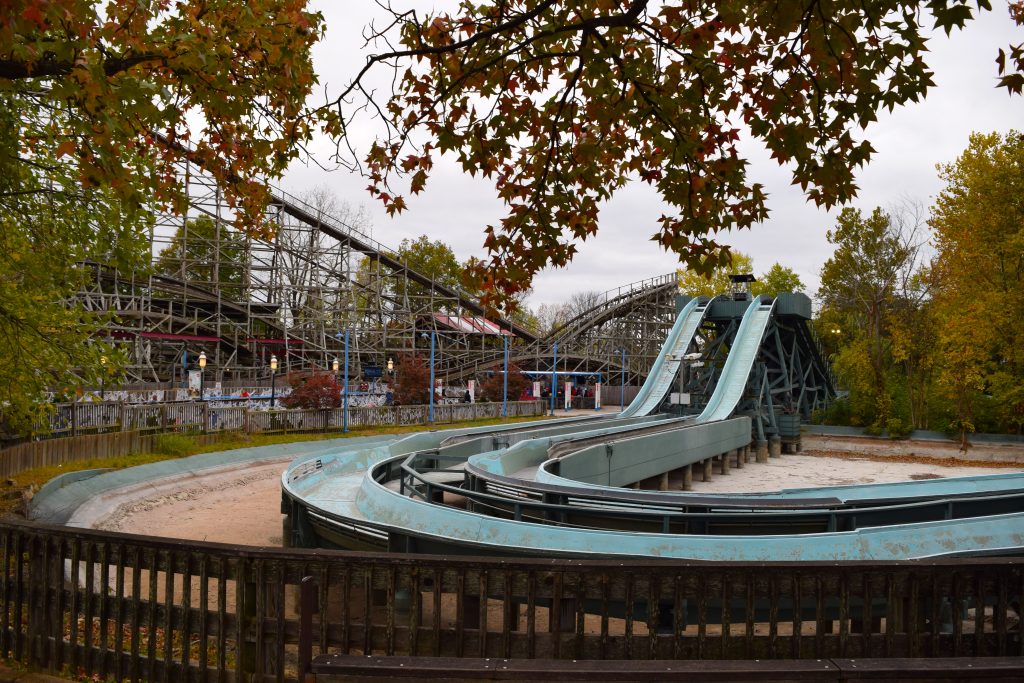 And one of the only parks (if not the only park) to boast a whopping 5 water rides and an included water park. None of that could be enjoyed on this particular visit, but it’s still impressive. 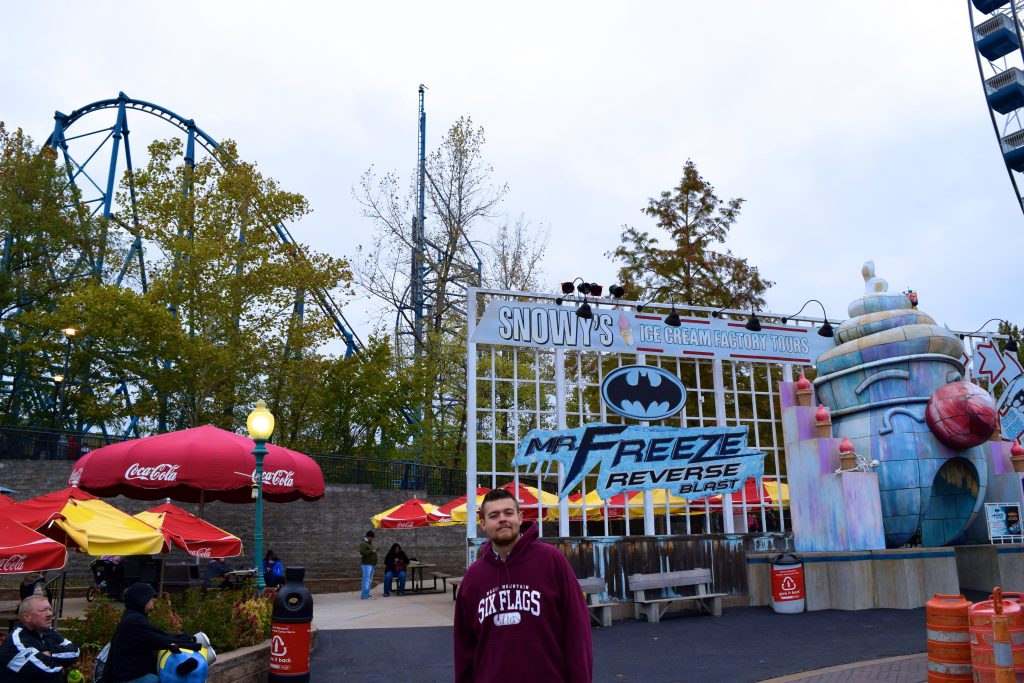 Past rides on Mr. Freeze (at both Six Flags parks) have occurred in the sweltering summer heat. How nice it will be to actually freeze on Mr. Freeze! 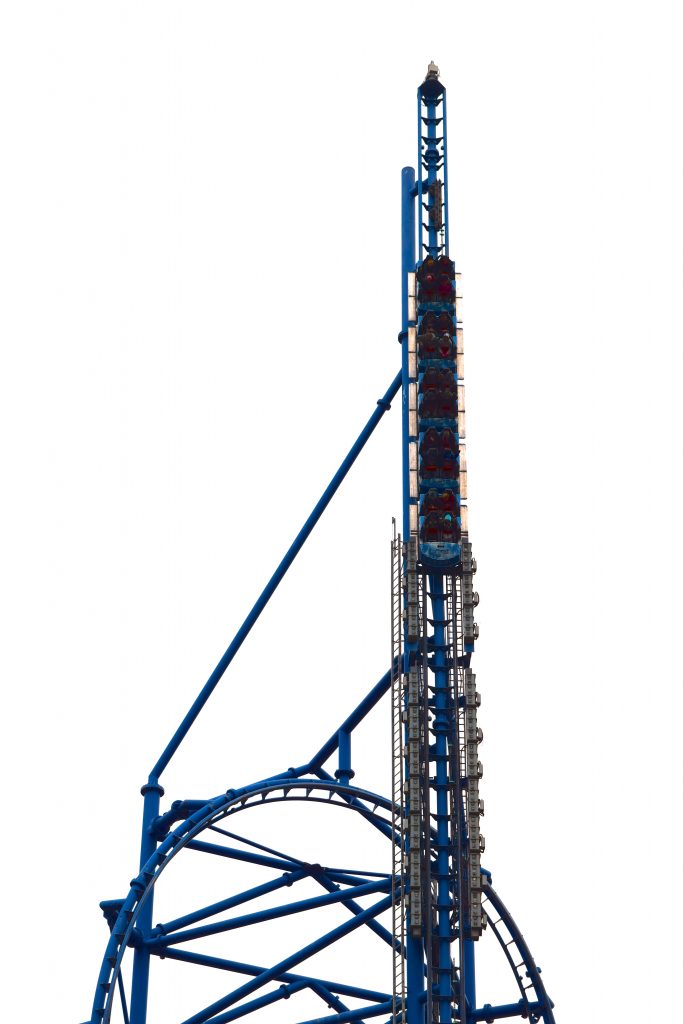 To say Mr. Freeze was ahead of its time is an understatement; celebrating its 20th anniversary this year, Freeze provides an unrelenting experience that’s every bit as potent as the industry’s state-of-the-art launch coasters. 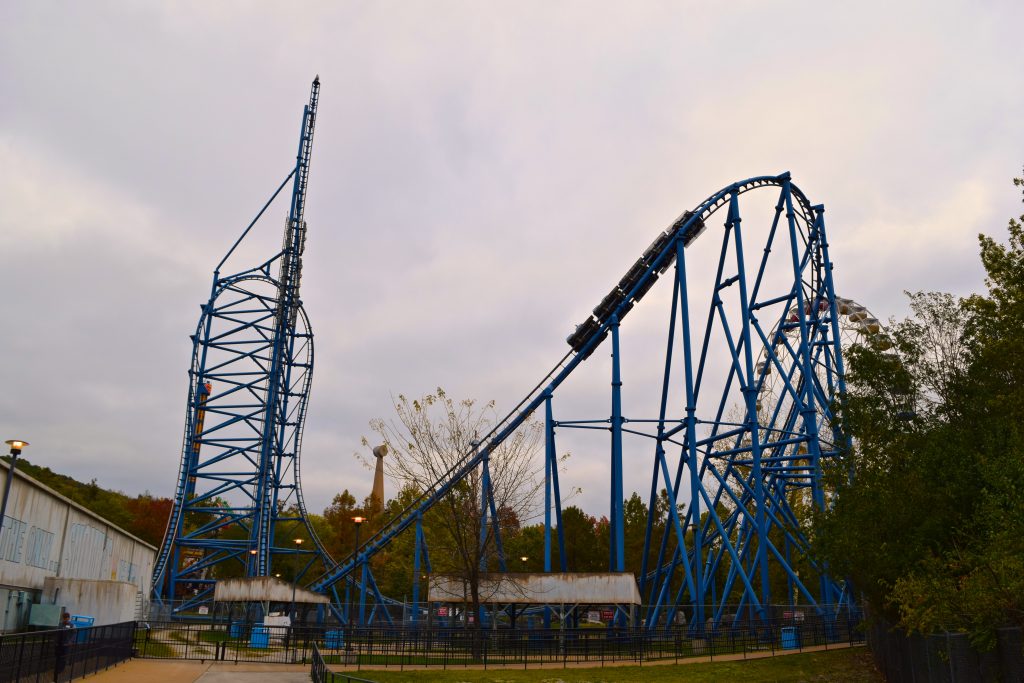 Regardless of weather, Mr. Freeze tears up its 1,300ft of track with unparalleled swiftness. 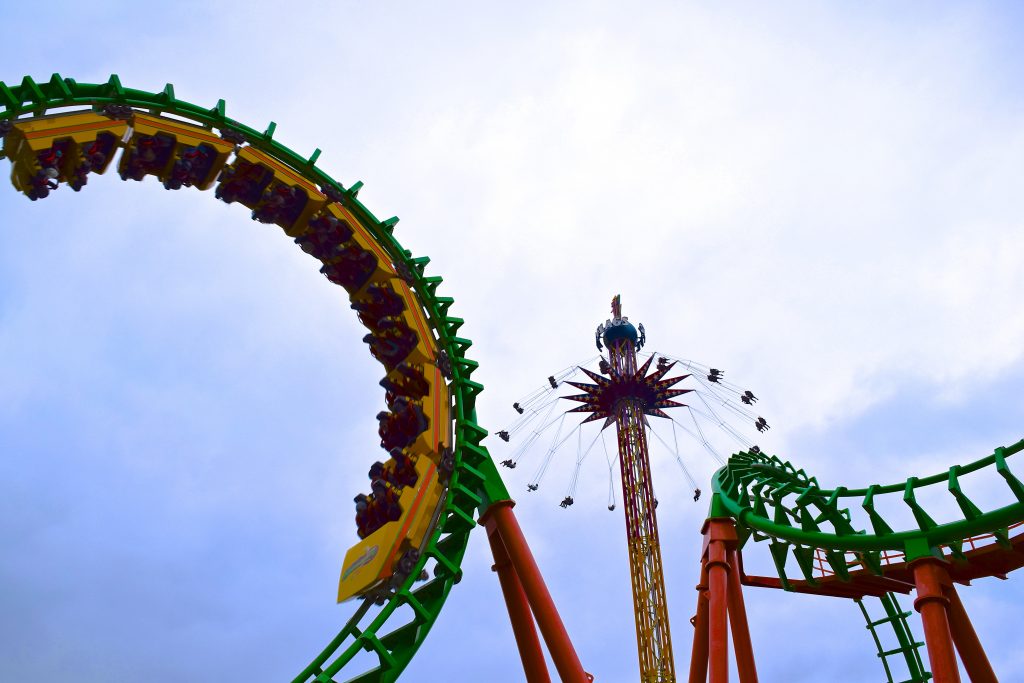 New for both myself and Sean this visit is Boomerang, a particularly smooth and charming Boomerang specimen rescued from Six Flags Over Texas. 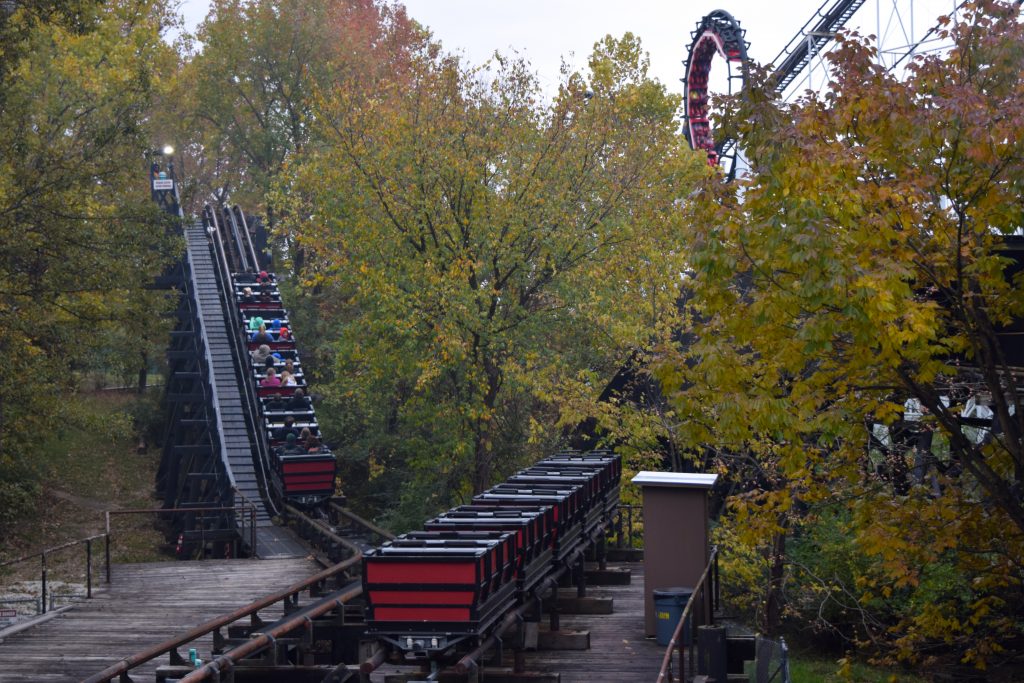 Sean and I are quite fond of old Arrow and Vekoma coasters; Six Flags St. Louis has a great collection from both manufacturers (shoutout to the ultra-friendly River King Mine Train crew and to Derek from maintenance for recognizing us!) 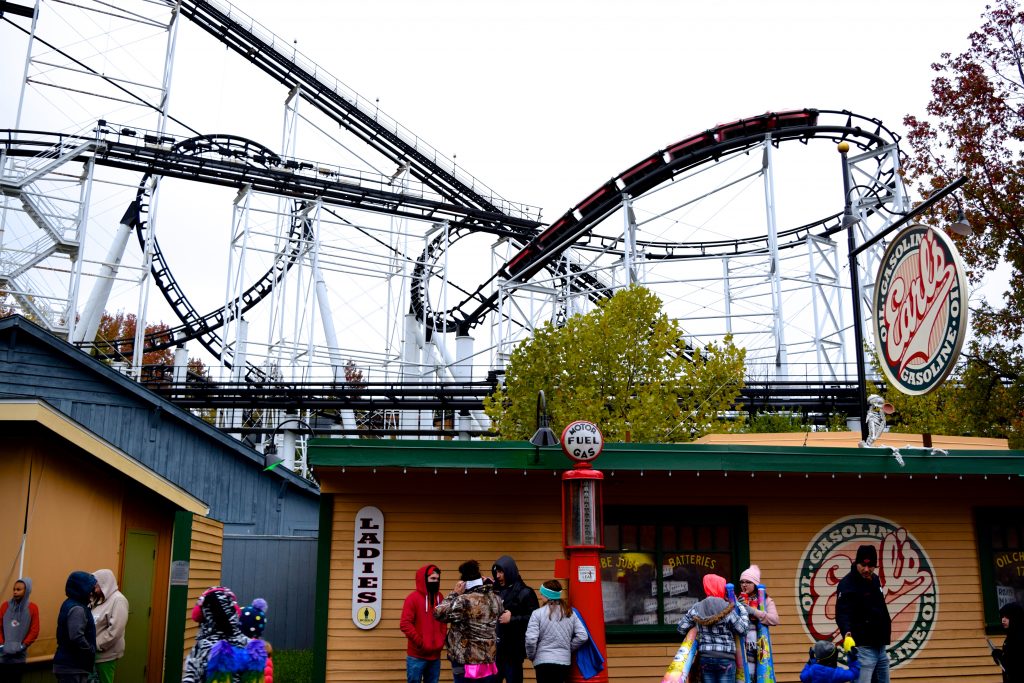 Ninja, the park’s “mega looper” was originally contracted by Arrow Development for “Expo ’86” in Vancouver. When Arrow filed for bankruptcy protection in 1985, Vekoma completed the ride. 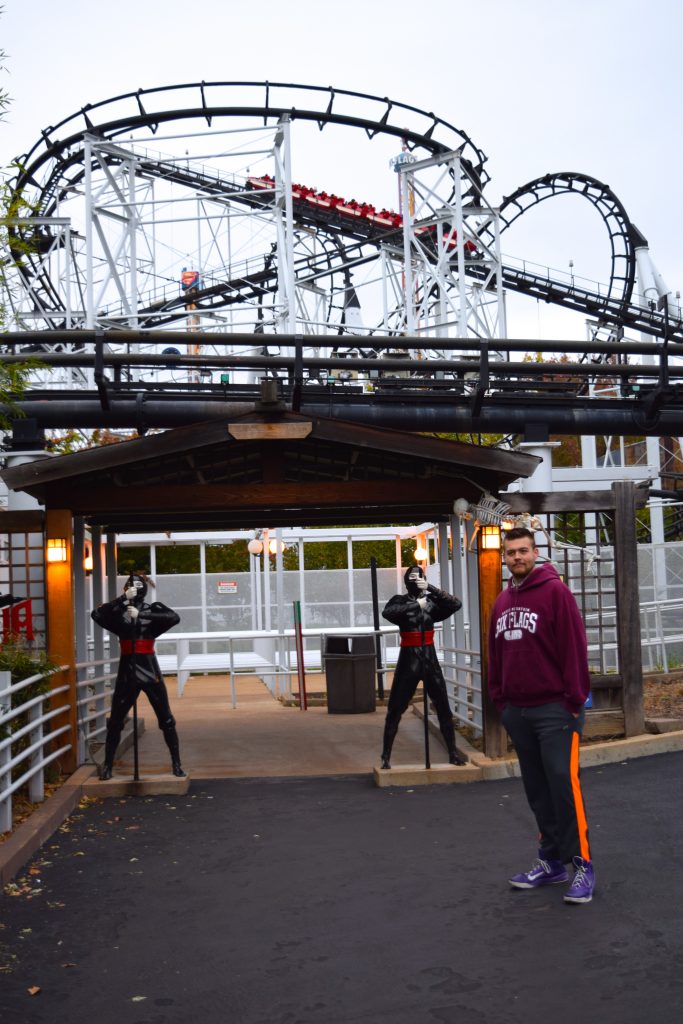 Ninja has a reputation for being one of the rougher mega-loopers, but Sean and I ended up really loving the ride. “The Blackbelt of Coasters” will begin it’s 30th season at SFSt.L next year. 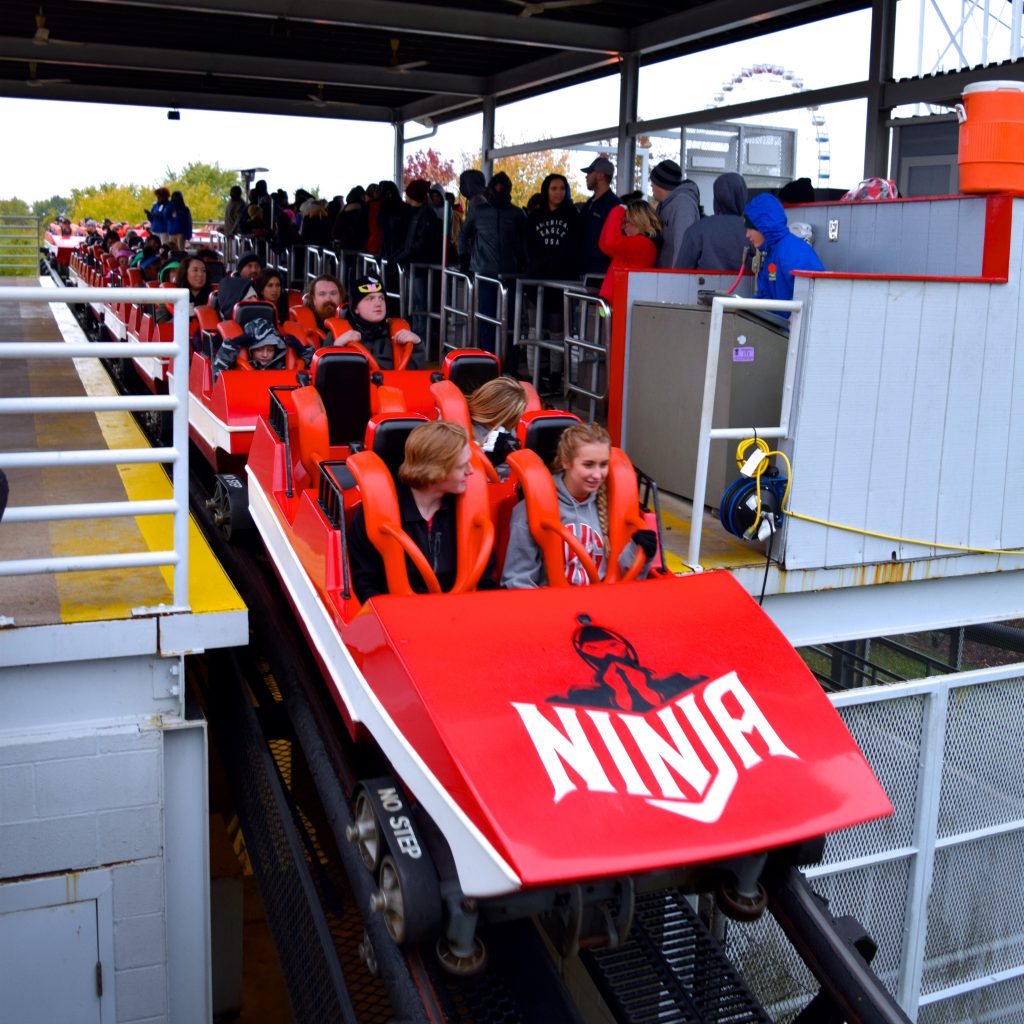 Part of my love for Ninja comes from the name it shares with my favorite Six Flags Magic Mountain coaster, but the St. Louis looper is a good ride in its own right. (shoutout to the Ninja ride crew for thinking my Ninja tattoo is cool) 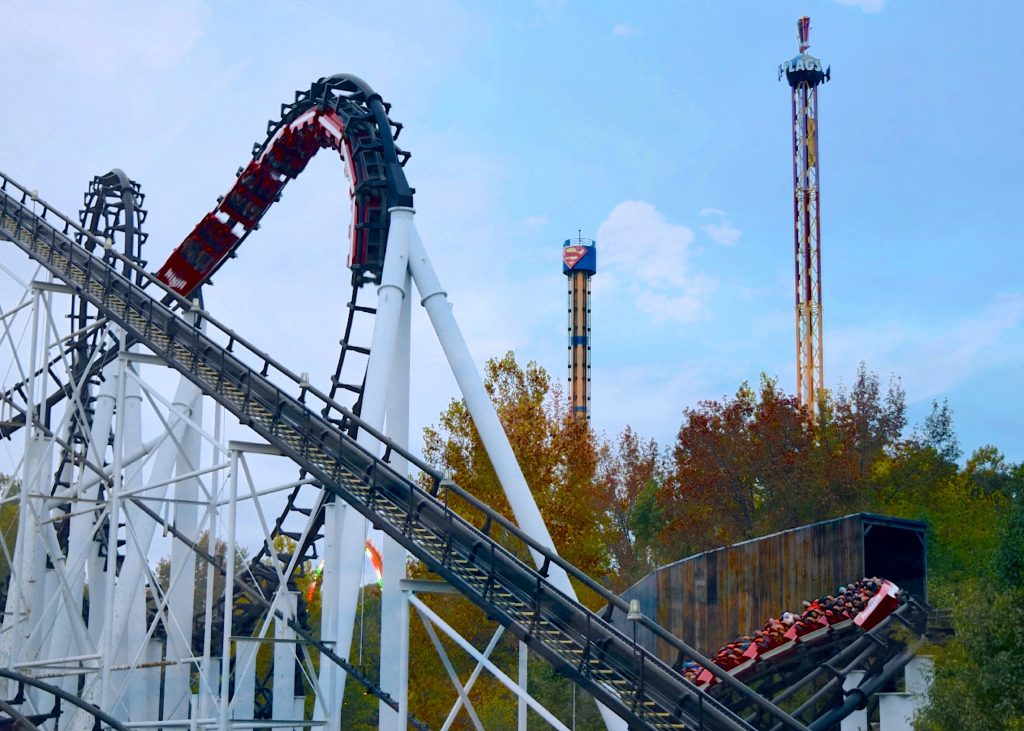 Six Flags Over Mid-America’s Ninja was the second coaster to bear the Japanese moniker; When Six Flags Great Adventure’s record-breaking 7-loop Arrow Dynamics coaster was announced for the 1988 season, media paraphernalia bore the name Ninja. Due to various planning setbacks, the ride was rerouted to Six Flags Great America, where it opened as Shockwave. 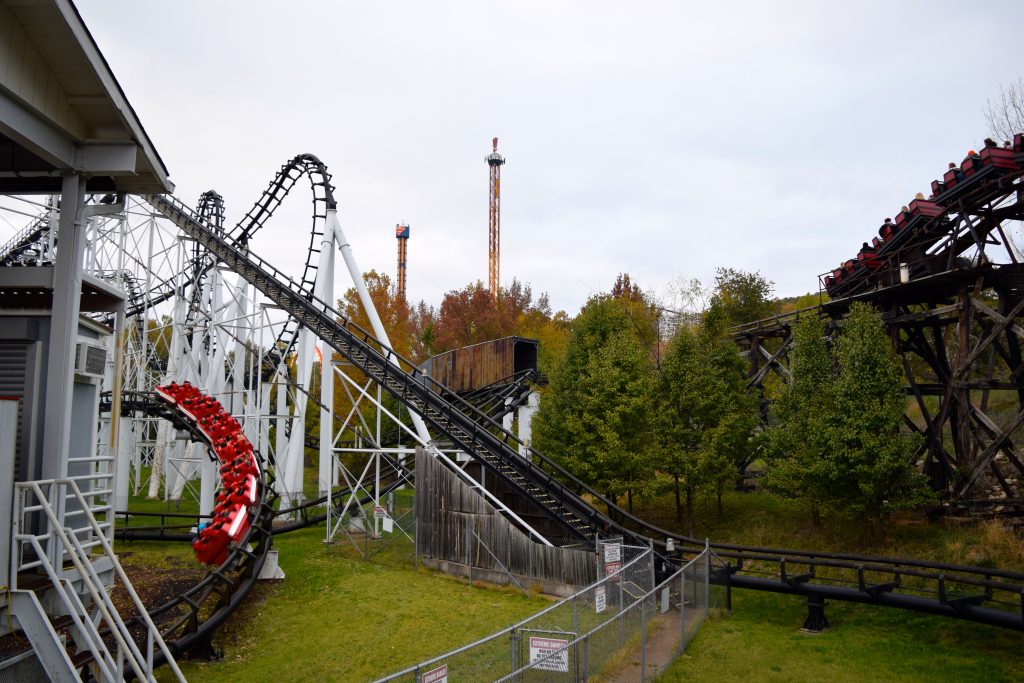 When SFGAd’s red and white mega looper finally come in 1989, the name had changed to Great American Scream Machine (the then-park-president being a recent transplant from Six Flags Over Georgia who insisted on the borrowed wooden coaster name). The 3rd and final Ninja opened at Six Flags Over Georgia in 1992; like the SFSt.L ride, the Georgia Ninja is a 2nd-hand Vekoma looper that still operates today ( in 2016 it was remodeled with new Vekoma MK-1212 trains and reopened as the patriotic Blue Hawk).

The Missouri Ninja would be another great candidate for MK-1212 trains; read more about them here! 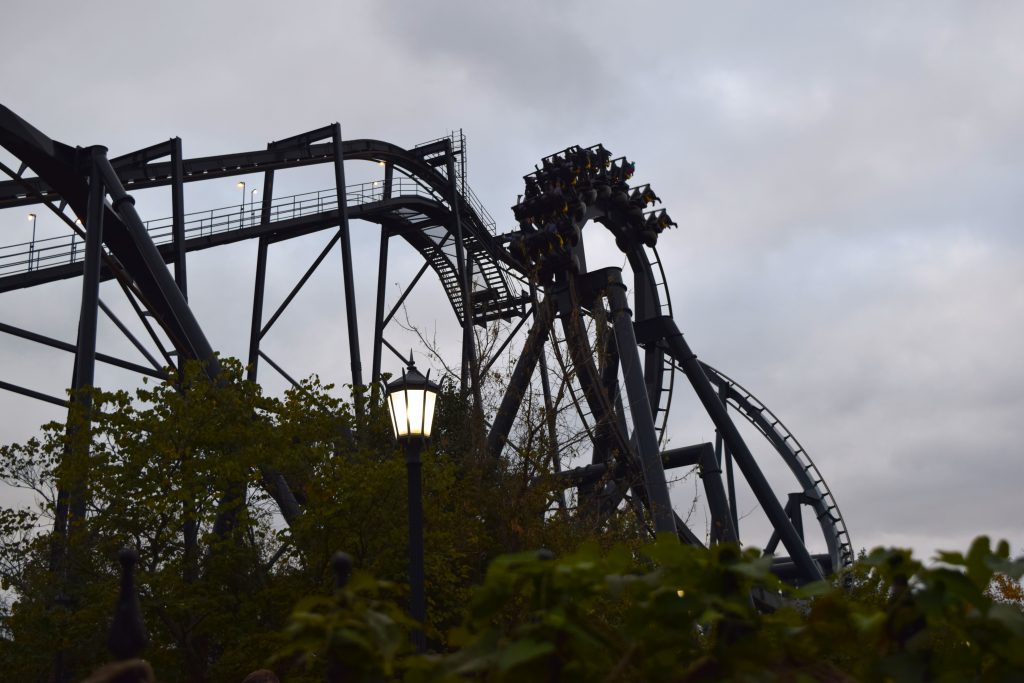 A first-generation Six Flags park wouldn’t be complete without a Batman: The Ride clone. 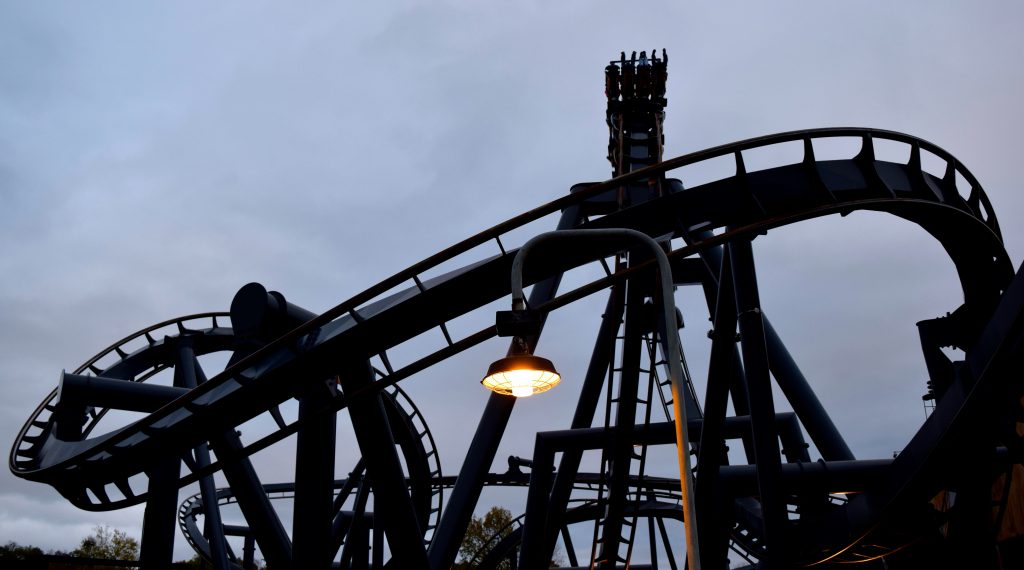 Both the Missouri Batman and Goliath at Six Flags Fiesta Texas are mirror-image Batman clones that opened in 1995 (The latter opened at Japan’s Thrill Valley as Gambit before spending three years as Six Flags New Orleans’ Batman before ending up at Fiesta Texas). 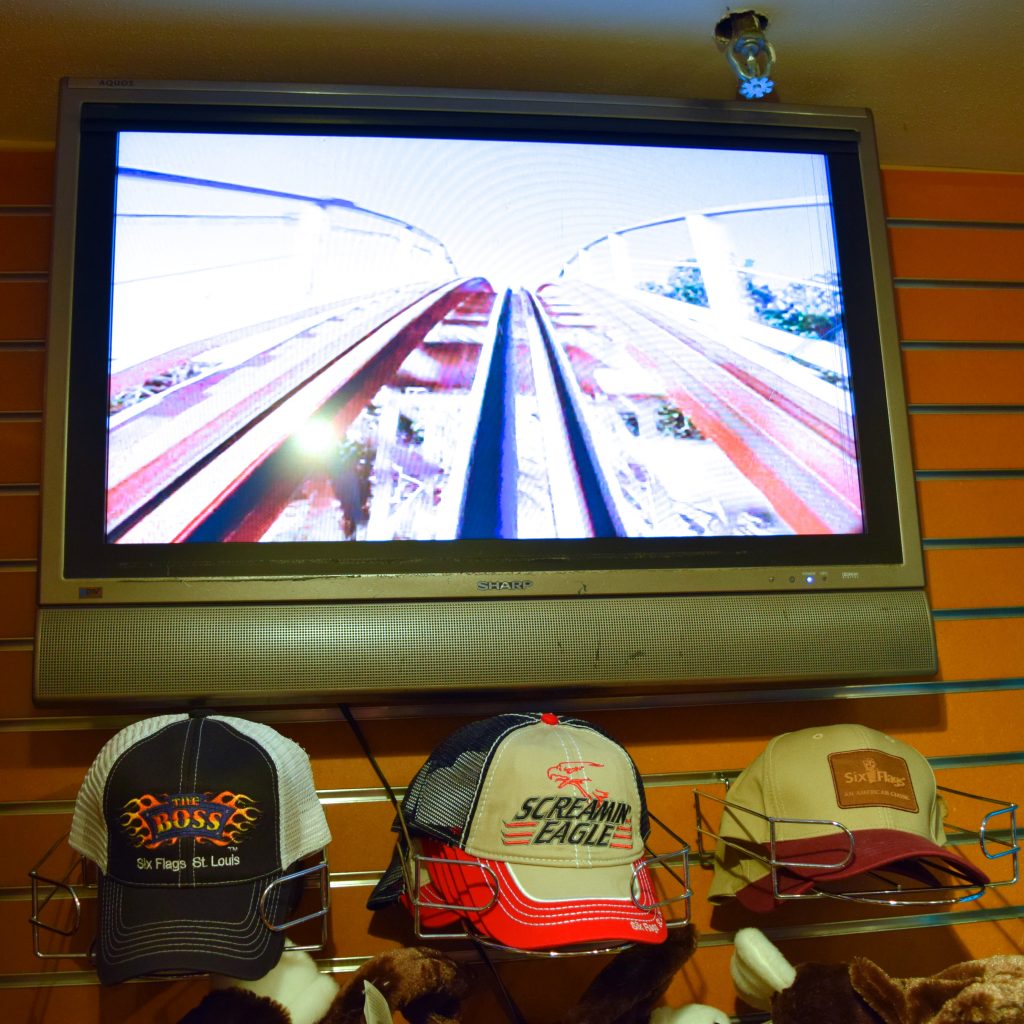 Shoutout to Six Flags St. Louis’s merch department for having LOTS of cool ride-specific stuff and a bunch of old Six Flags Over Mid-America ads running in one of the gift shops. 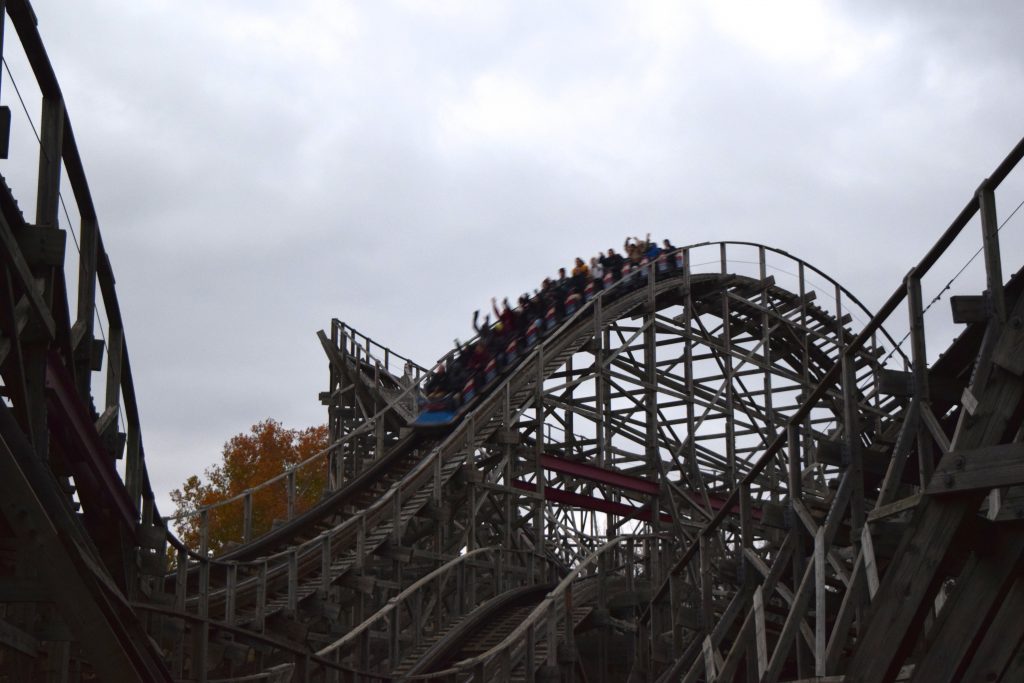 The solid GCI American Thunder is one of 3 woodies at Six Flags St. Louis, unfortunately the massive CCI Boss was closed (its plastic Gerstlauer trains are extremely prone to cold-weather valleying). 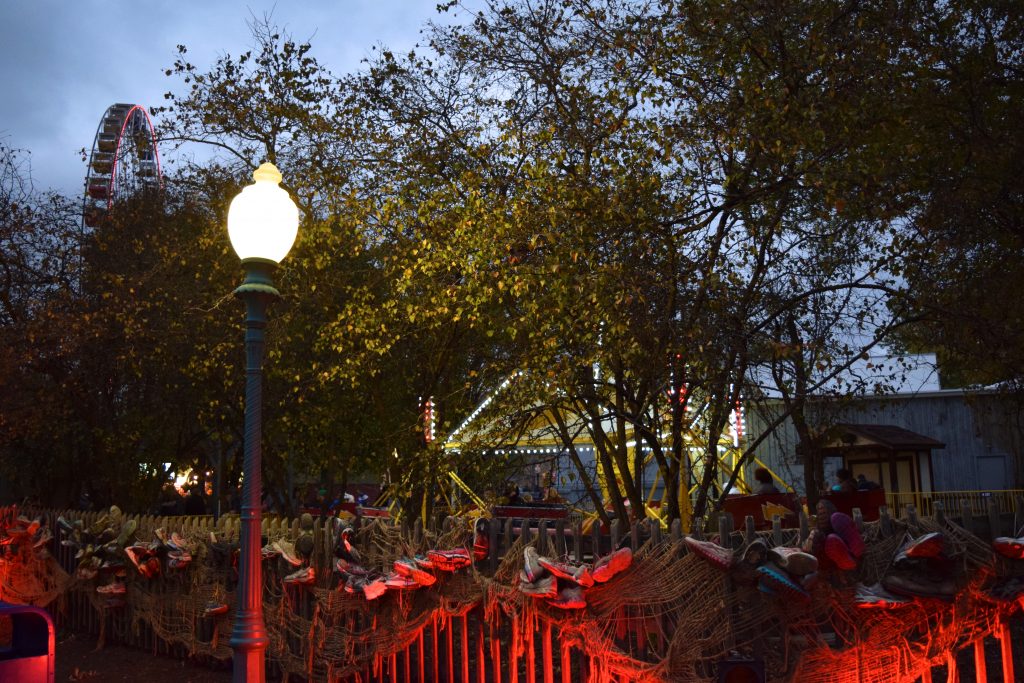 While we didn’t participate in any Fright Fest mazes on our visit, Six Flags St. Louis did an excellent job of decking-out the park with lots of creepy atmosphere. 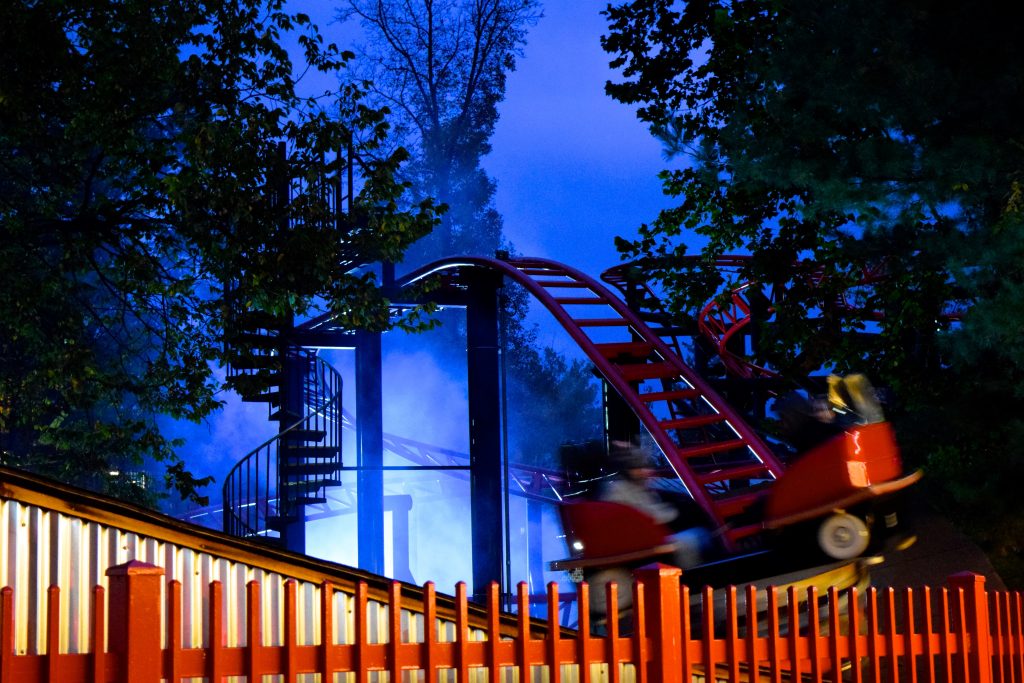 The park wasn’t overly croweded on our visit (probably due to the unseasonably low temperature), but a Saturday during Fright Fest still means decent crowds. Big thank you to our friends Six Flags Magic Mountain and Six Flags St. Louis for setting up FlashPass Gold for us.

(and an EXTRA big thank you to the FlashPass representatives on duty at around 3pm for being so welcoming and for giving us exit passes for the park’s newest rides, Spinsanity and Justice League: Battle for Metropolis) 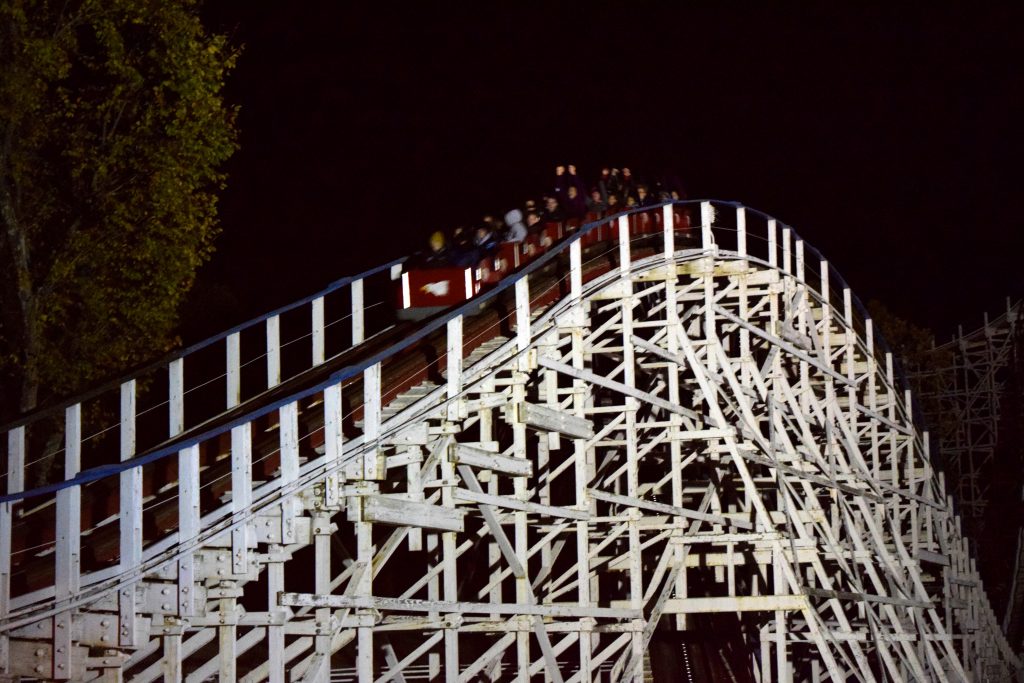 The biggest surprise of the visit was Screamin’ Eagle, which gives ferocious night rides even when its 37º outside (shoutout to the lead ride host who made my Ninja tattoo into a trivia question; this is the second time I’ve experienced Screamin’ Eagle Station Trivia and I think more parks should do this. SO FUN) 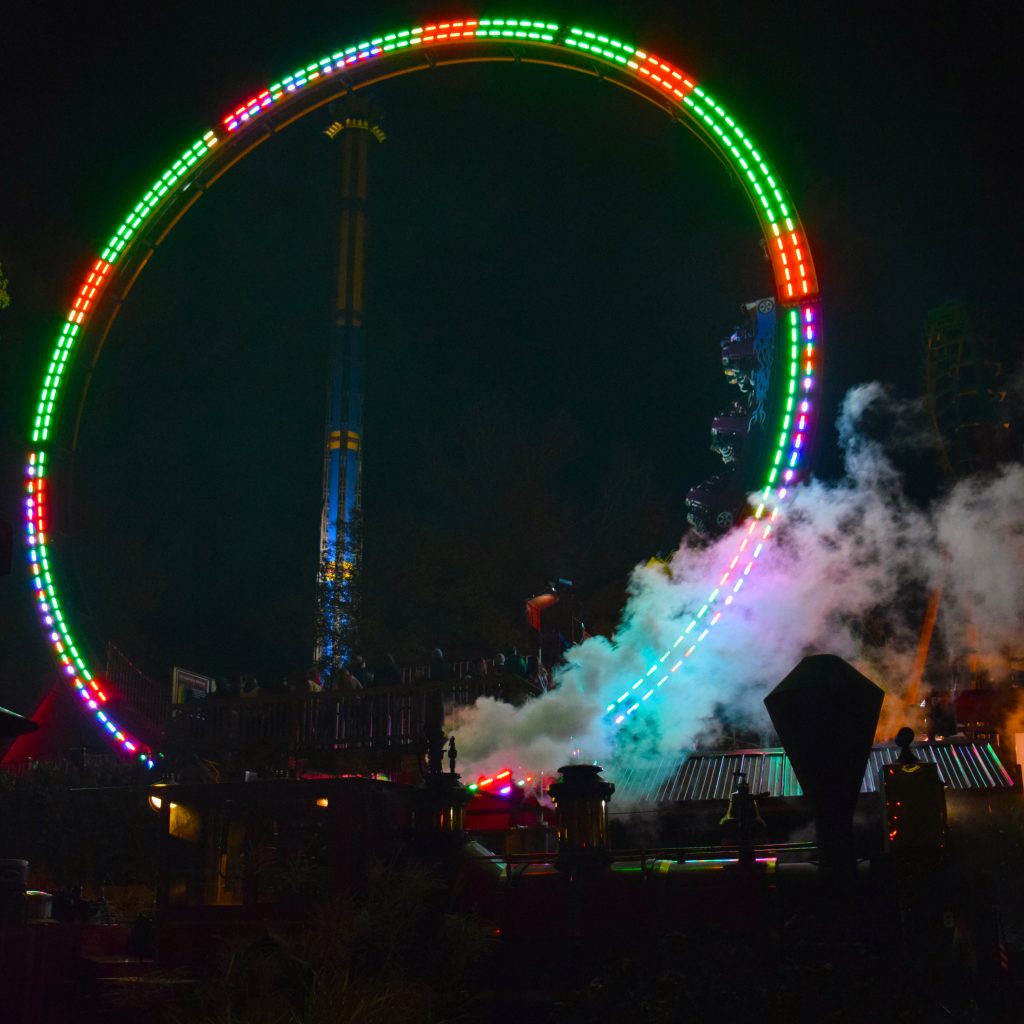 Time for a train ride! 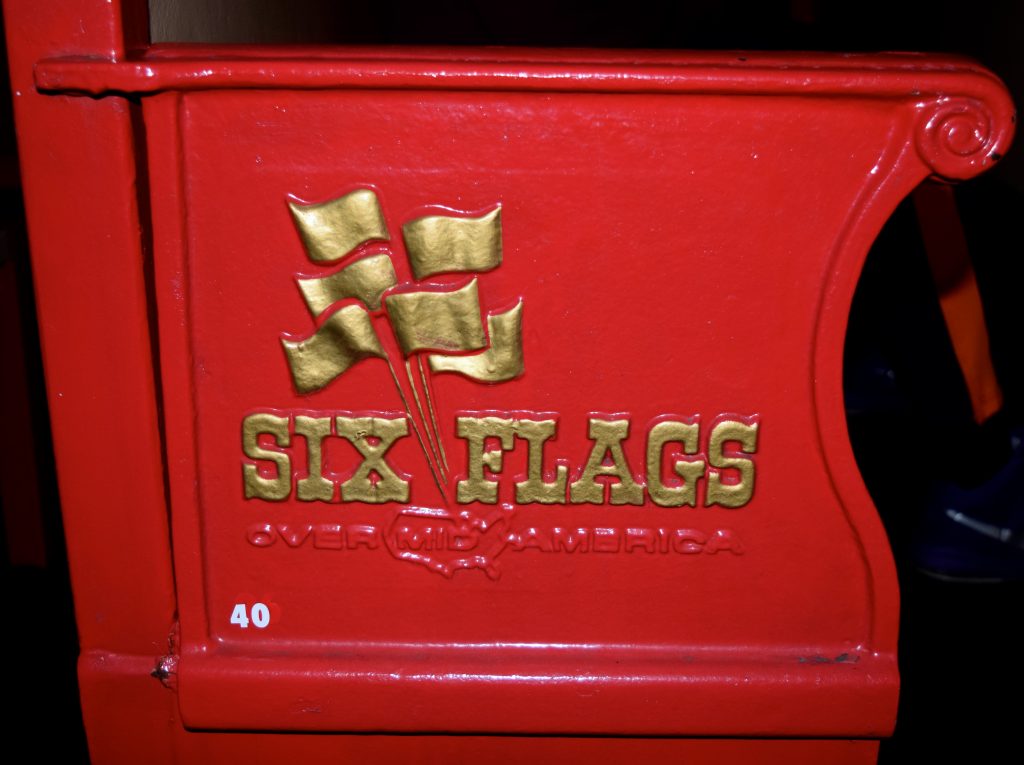 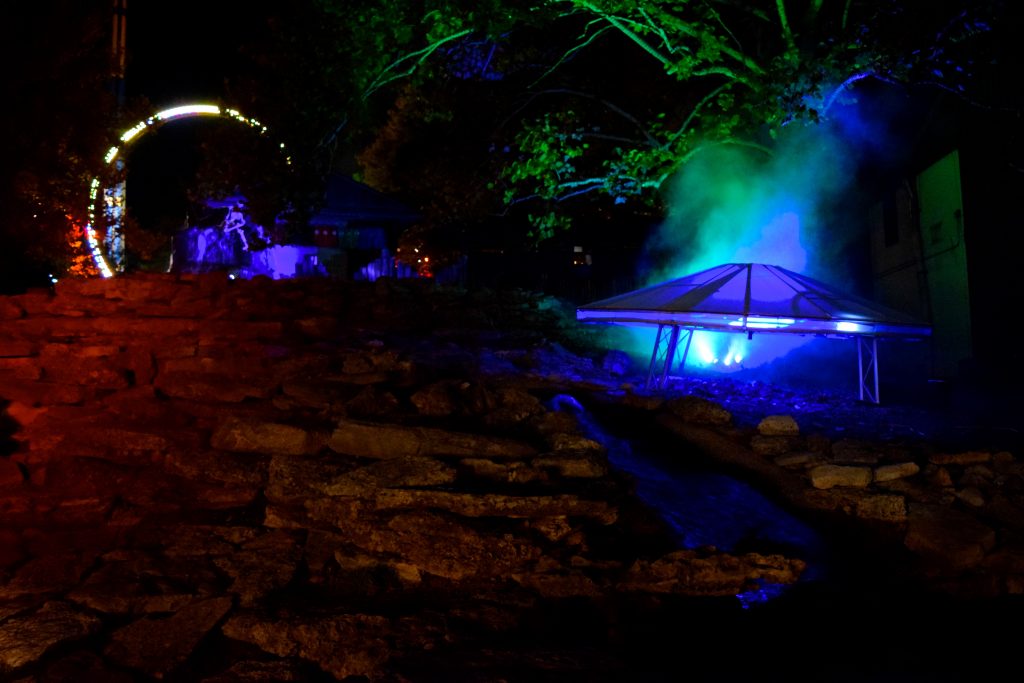 Many coaster enthusiasts know that River King Mine Train was once a duel-track mine train (the other half now resides at Magic Springs & Crystal Falls as Big Bad John, following a decade at Dollywood asThunder Express), but what you might not know is that the old station and maintenance bay for the departed mine train is now home to one of St. Louis Fright Fest’s most popular mazes, Slaughter House. 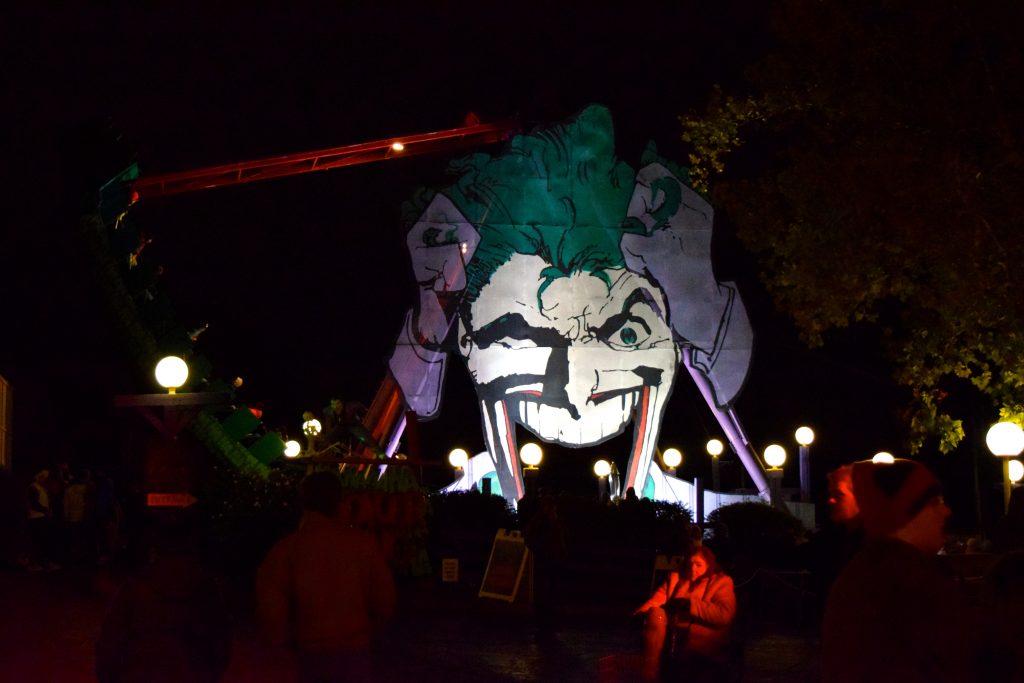 The park’s Joker-themed pirate ship ride fits right in with Fright Fest, despite looking like this all year round. 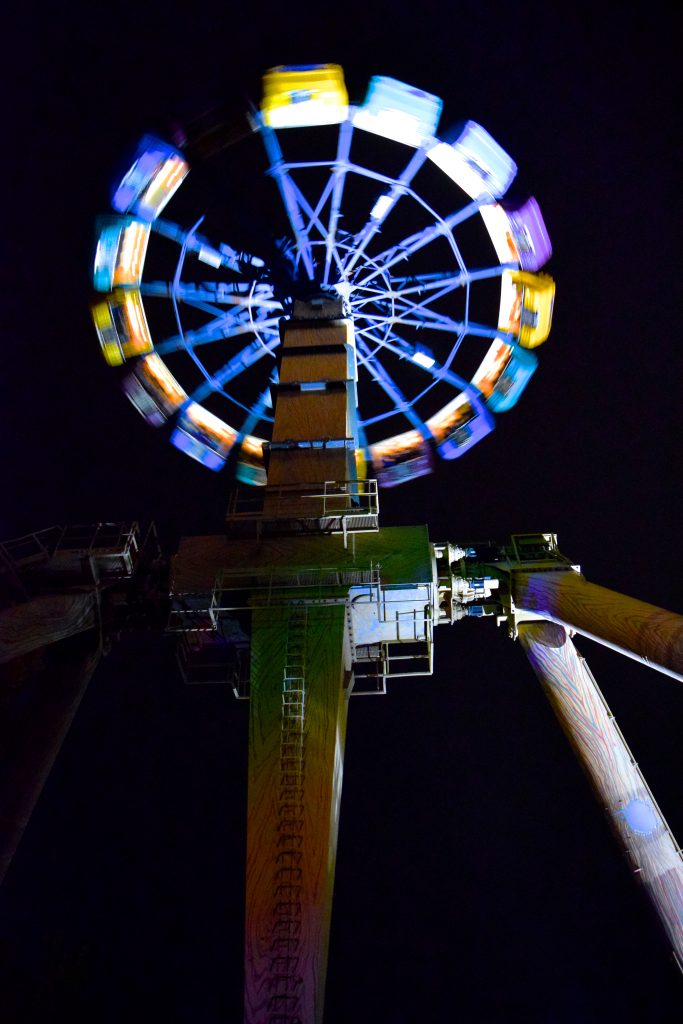 We finished the night on the park’s ultra-rare Bussink Excalibur ride. First debuting at the 1992 Oktoberfest, Excalibur (originally known by its trade name, Evolution) spent a few troubled years at Six Flags Great Adventure before enjoying a consistent operating schedule at Six Flags St. Louis. This ride still holds the Guinness World Record for “Largest Inverting Carousel Structure”, so kudos to the SFSt.L maintenance department for managing to keep this monster operational.

You may have noticed that we had numerous positive interactions with SFSt.L staff on our visit; one last BIG SHOUTOUT to the entire park and its staff for being so amazing and for making this our favorite visit to any Six Flags park ever.