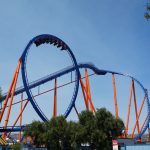 It’s time for a quick Six Flags Magic Mountain Update again! With our travels out of state and to other parks such as SeaWorld it’s been a while since we threw in a little update. In this update we’ll take a look at some landscaping, construction, Fright Fest preparations and Tidal Wave!

First up, like most parks around the state, the flags at the main plaza are half mast, showing respect for the recent events around the nation. 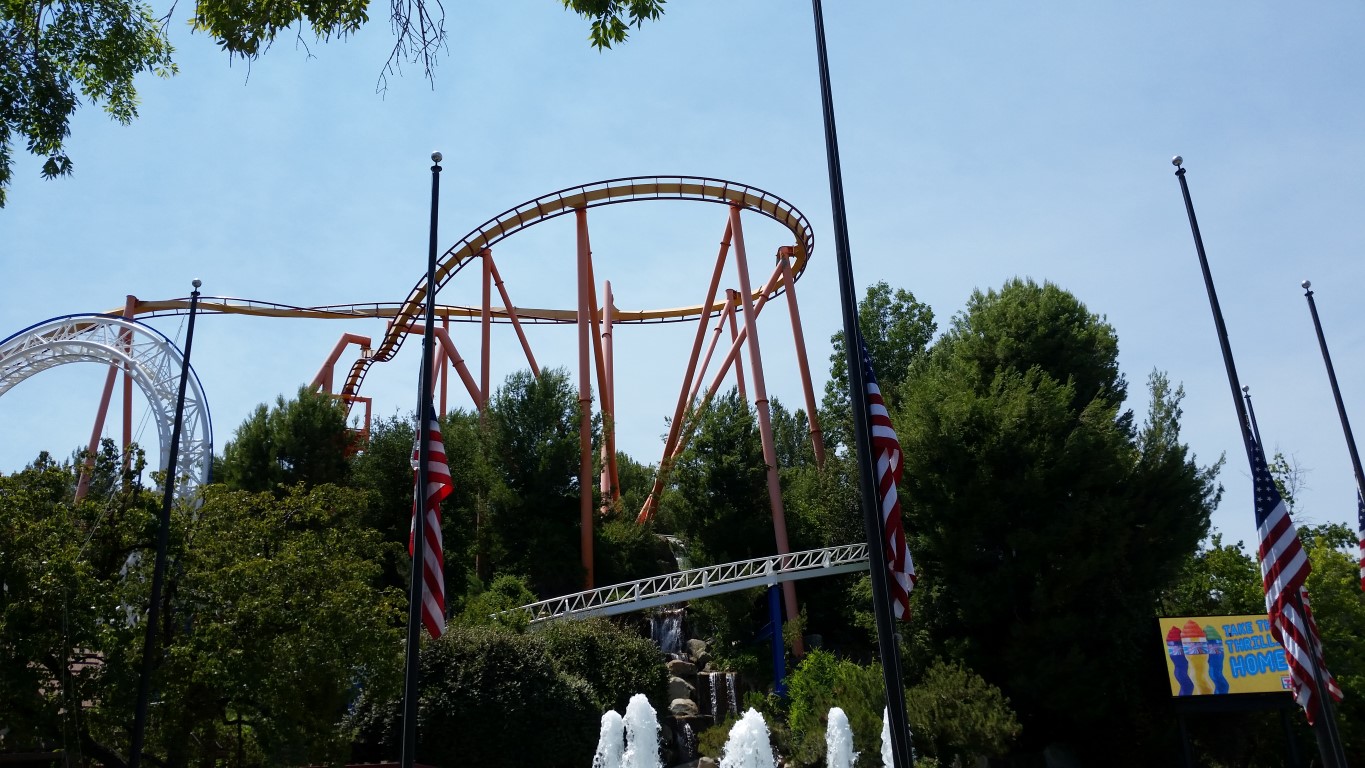 Over by the Helpful Honda Express, the planters housing The New Revolution supports have received some new flower beds, looking very nice. 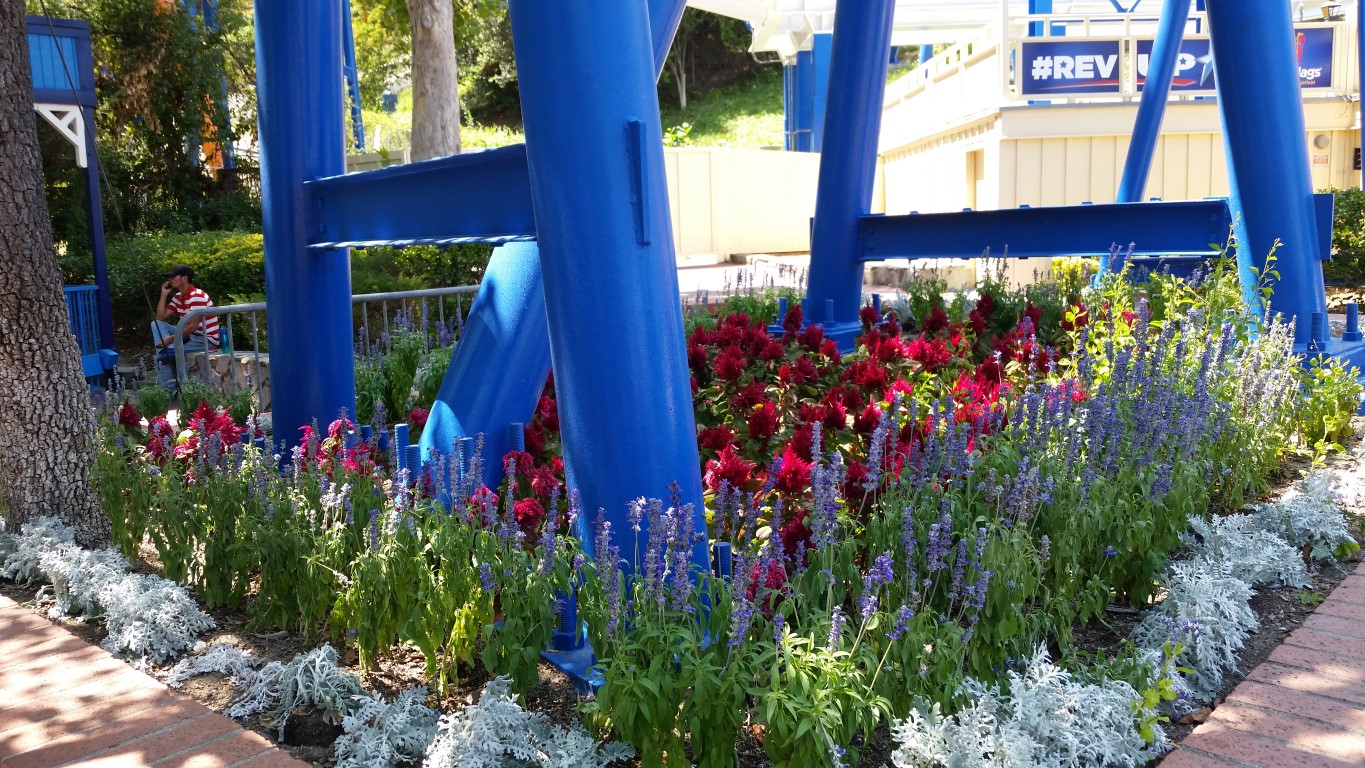 Also near the front of the park, Six Flags continues their lineup of limited-time-only food items with a new Ultimate Funnel Cake made with M&M’s. It seems that most restaurants around the park have specialty items from time to time, recent ones that have already ended include Oreo Milkshakes and BBQ Chicken Pizza. 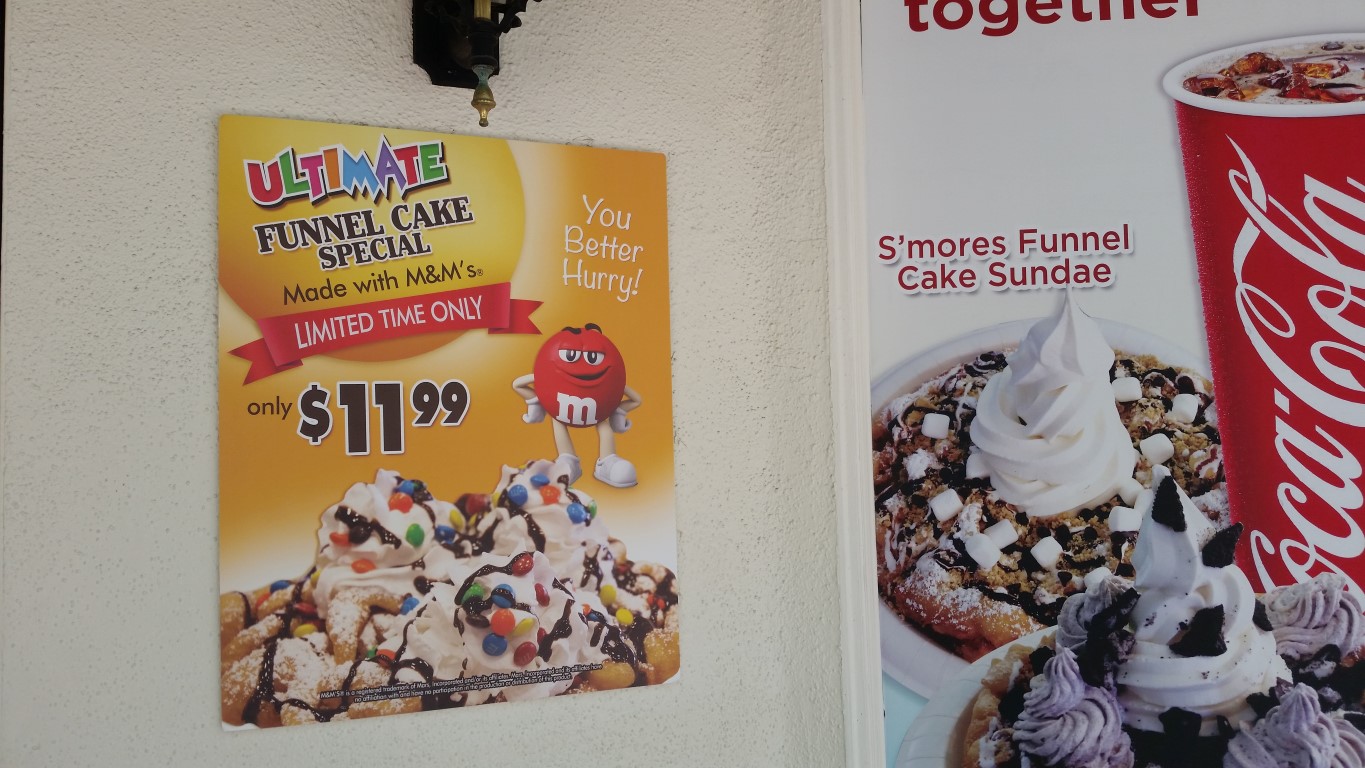 On top of Samurai Summit we spot the first Fright Fest preparations as structures for lighting, and lights themselves, are going up. 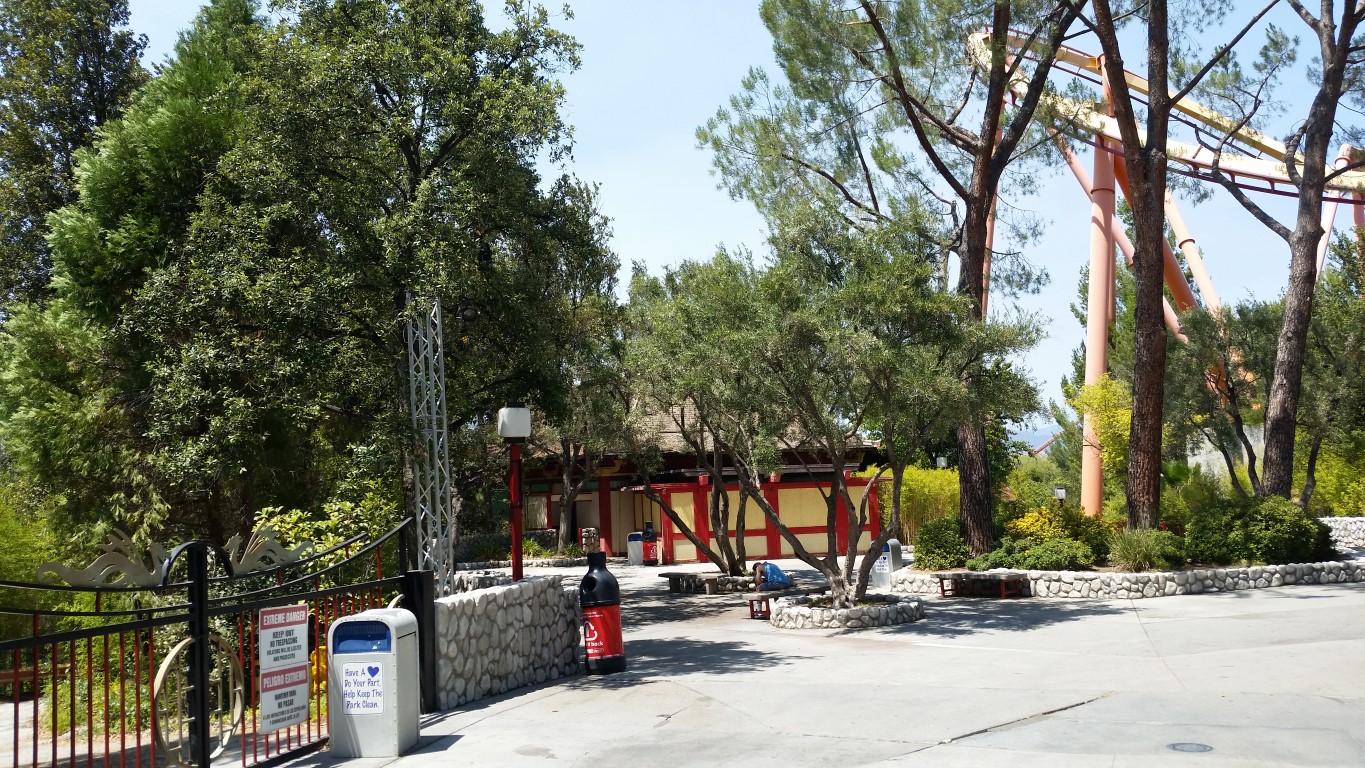 Chupacabra is returning this year we’ve heard. There are several changes in store for the maze. No visible changes have been made yet. 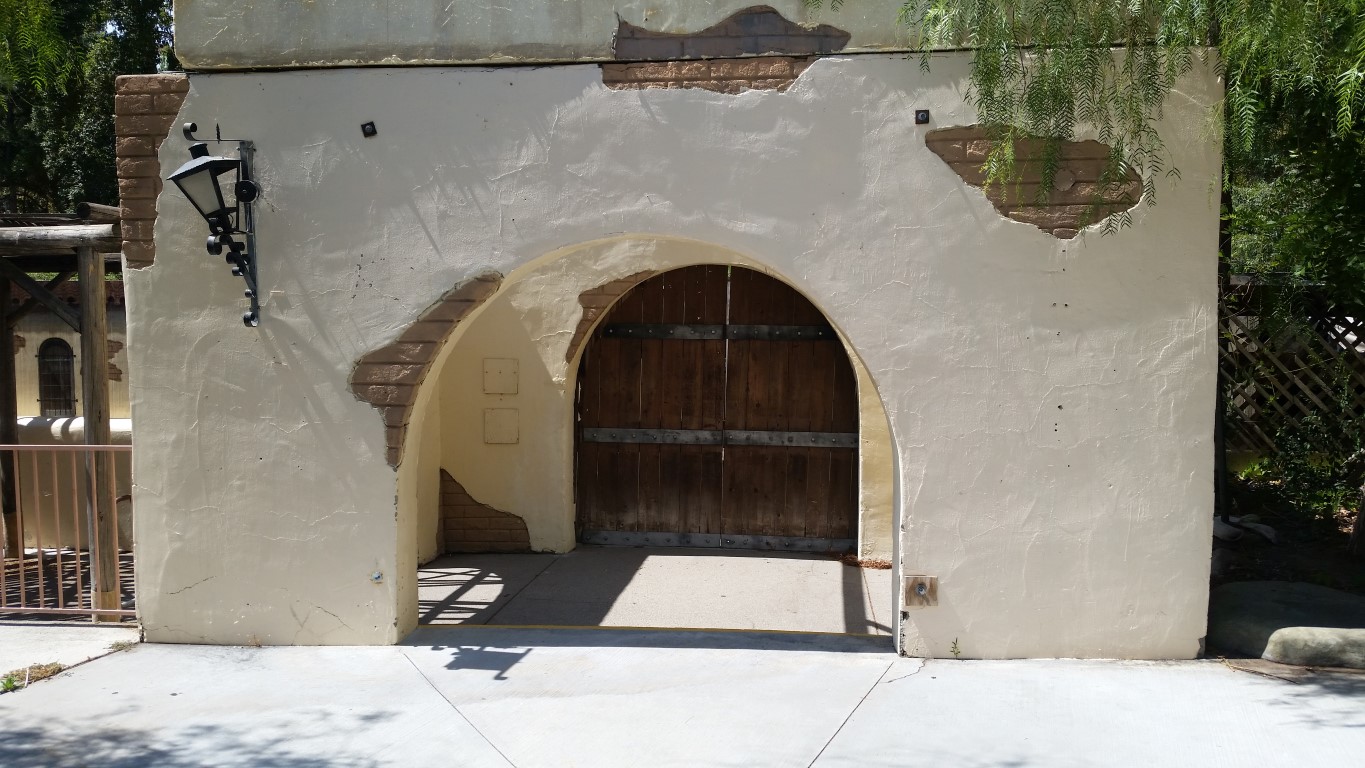 Speaking of changes, the area behind this fence is now a clear dirt lot with lots of the remaining demolished materials removed. It’s still rumored to be a Justice League dark ride, these rumors also surround Six Flags Great Adventure, Six Flags Over Georgia, and even Parque Warner Madrid! We’ll have to wait and see. Only a few more weeks ’til the announcements! 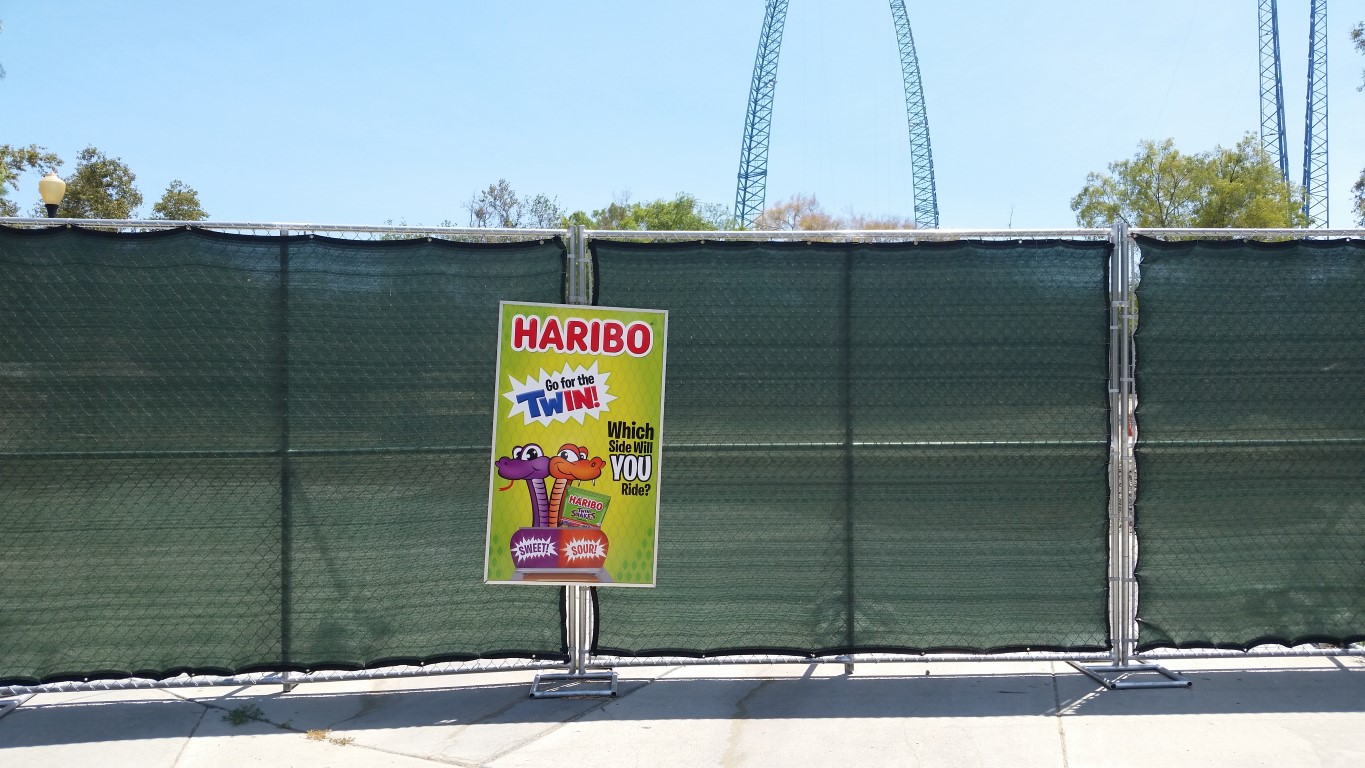 Nearby Tidal Wave has finally reopened! The lift motor has been replaced and the ride also received some repaints. The sign on the station for example has been repainted along with railings and walls. 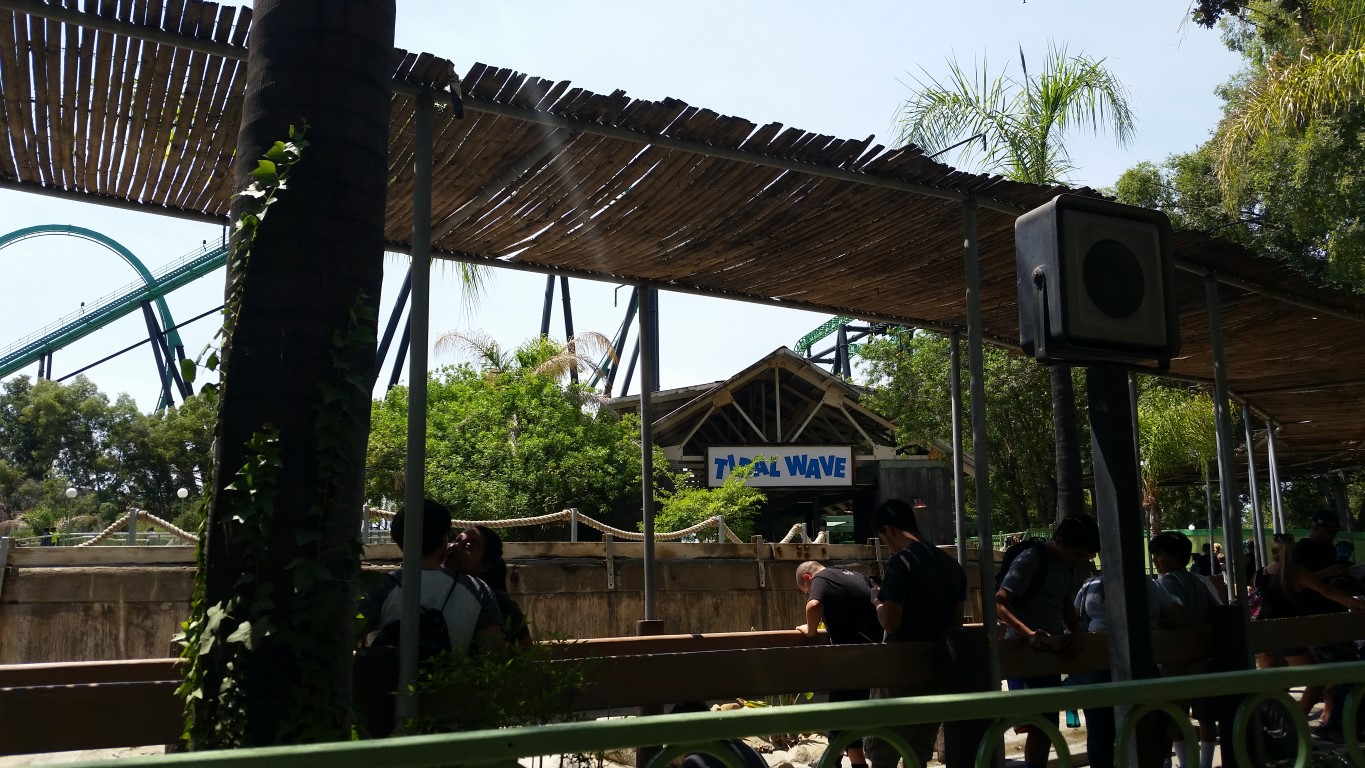 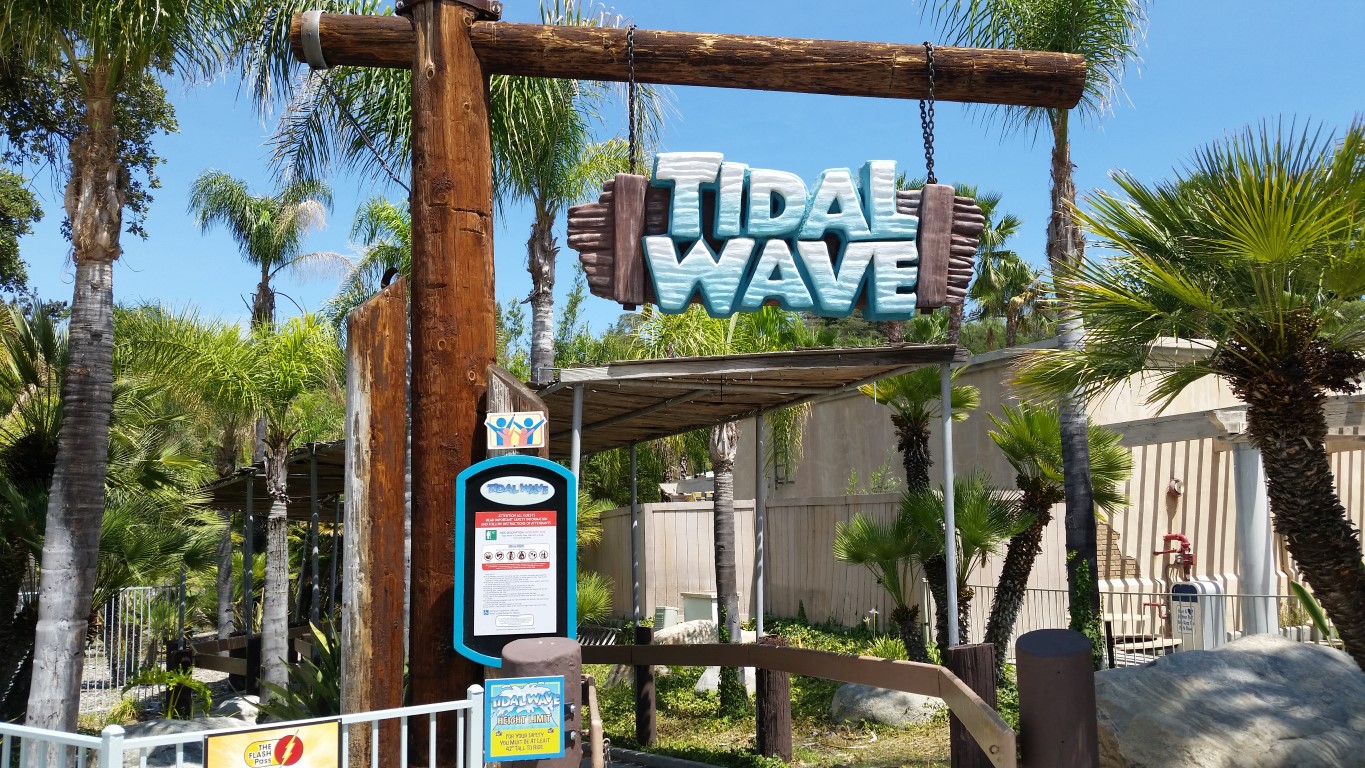 The ropes on the far end of the splash down have been replaced. 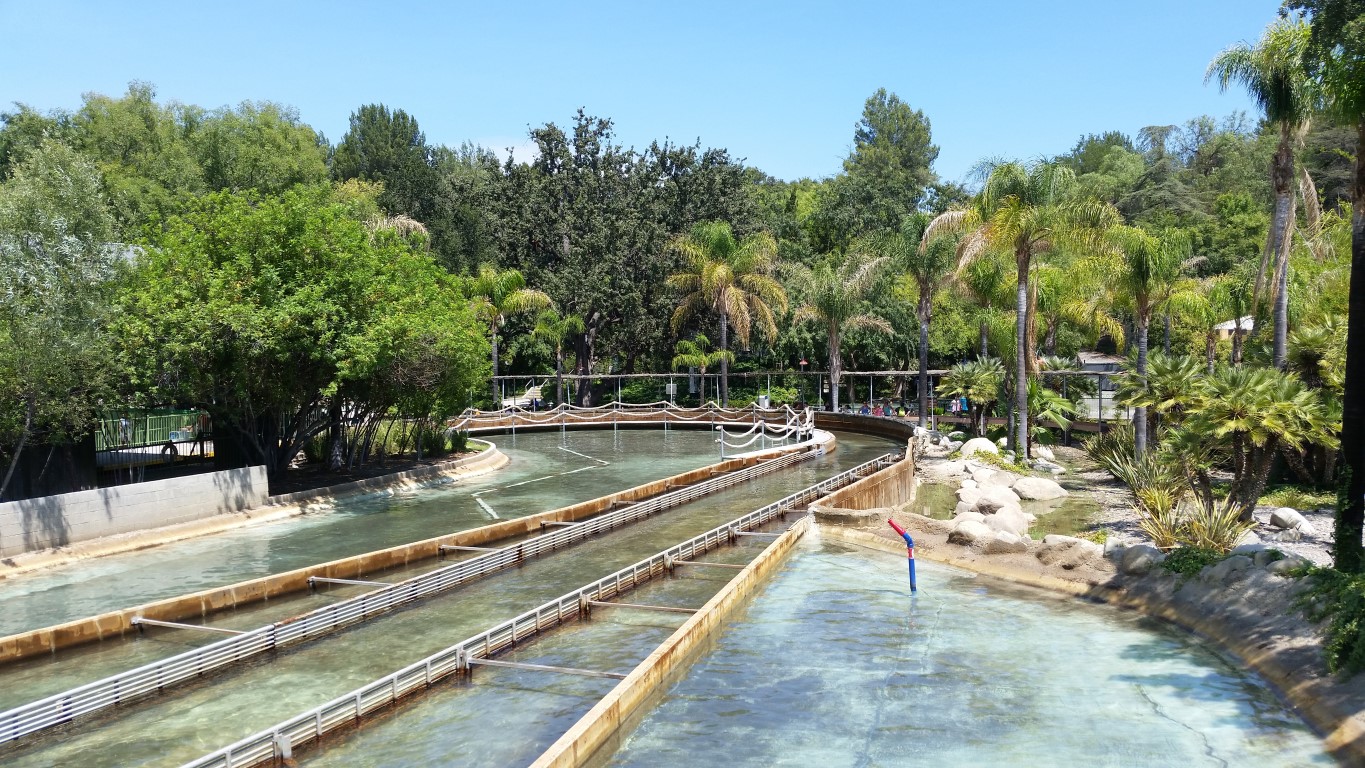 The ride is currently operating with just one boat… and right when I was waiting to take a picture of that boat, the ride broke down… So here’s a boat-less drop for you. 😀 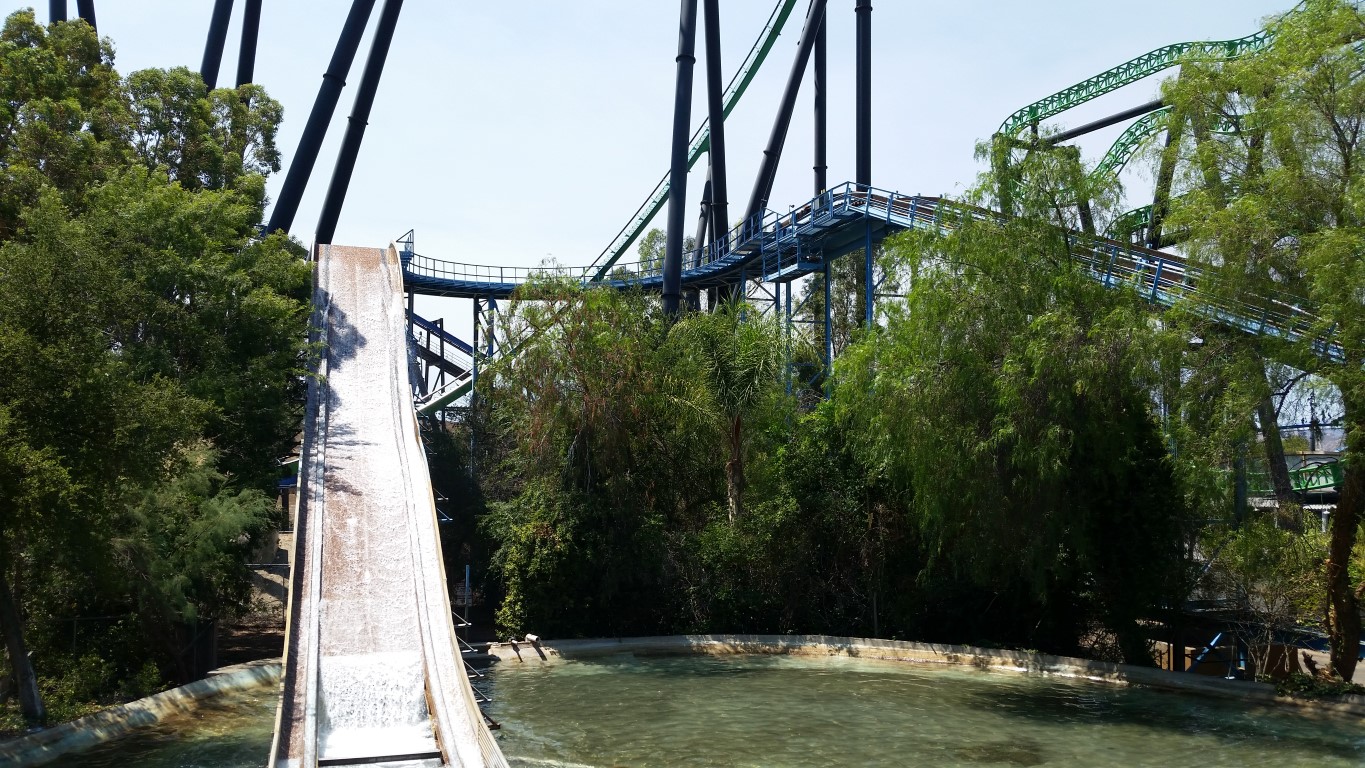 Over in DC Universe, the lighting for the unique Sinister Circuit scare zone is currently being installed. 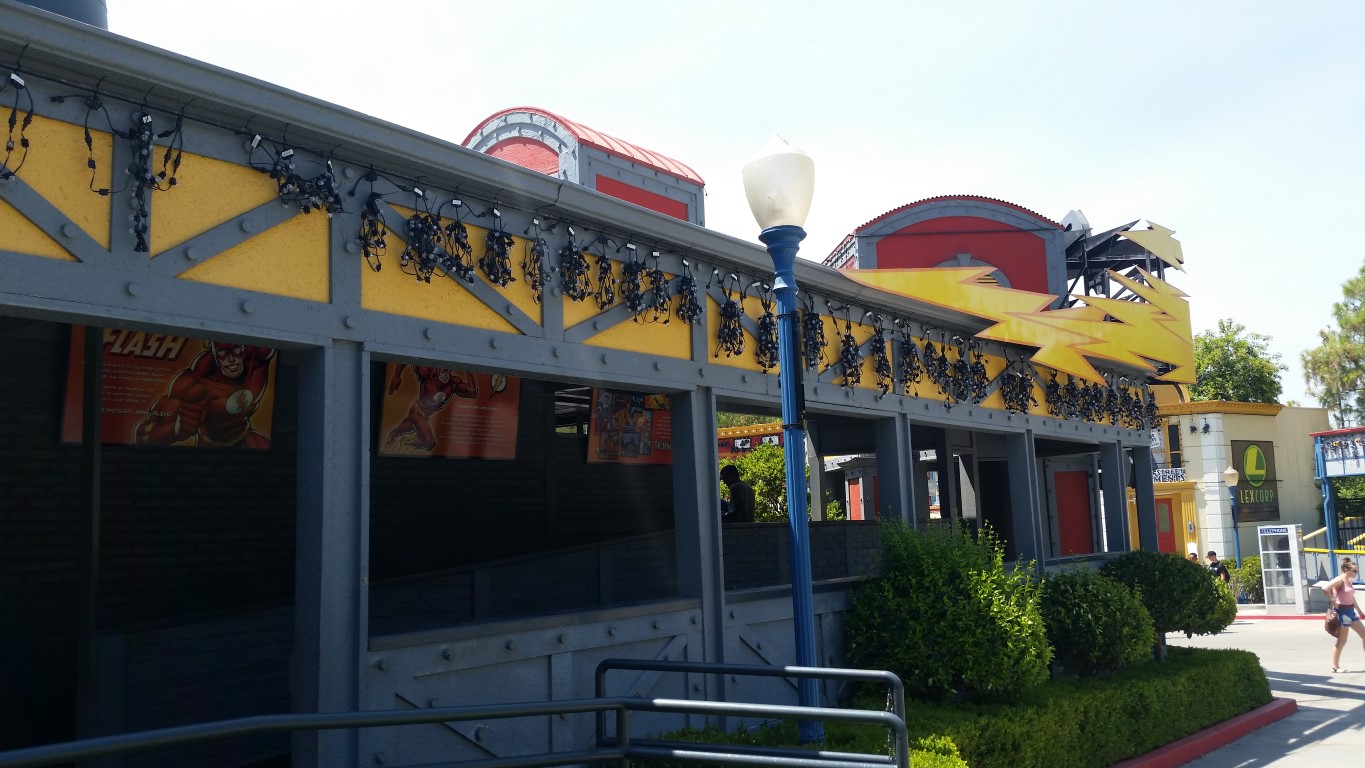 Most of the lights are hung in position and have to be unwrapped and hung vertically. 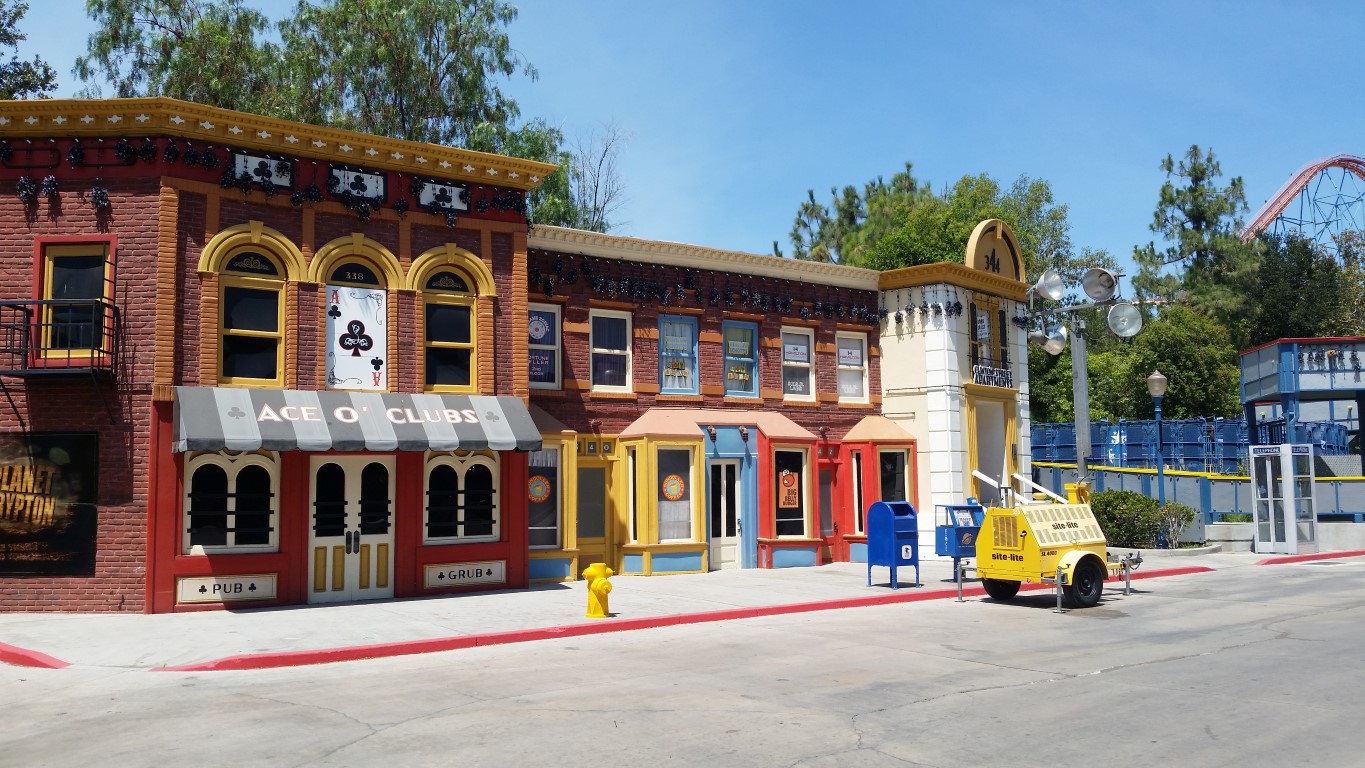 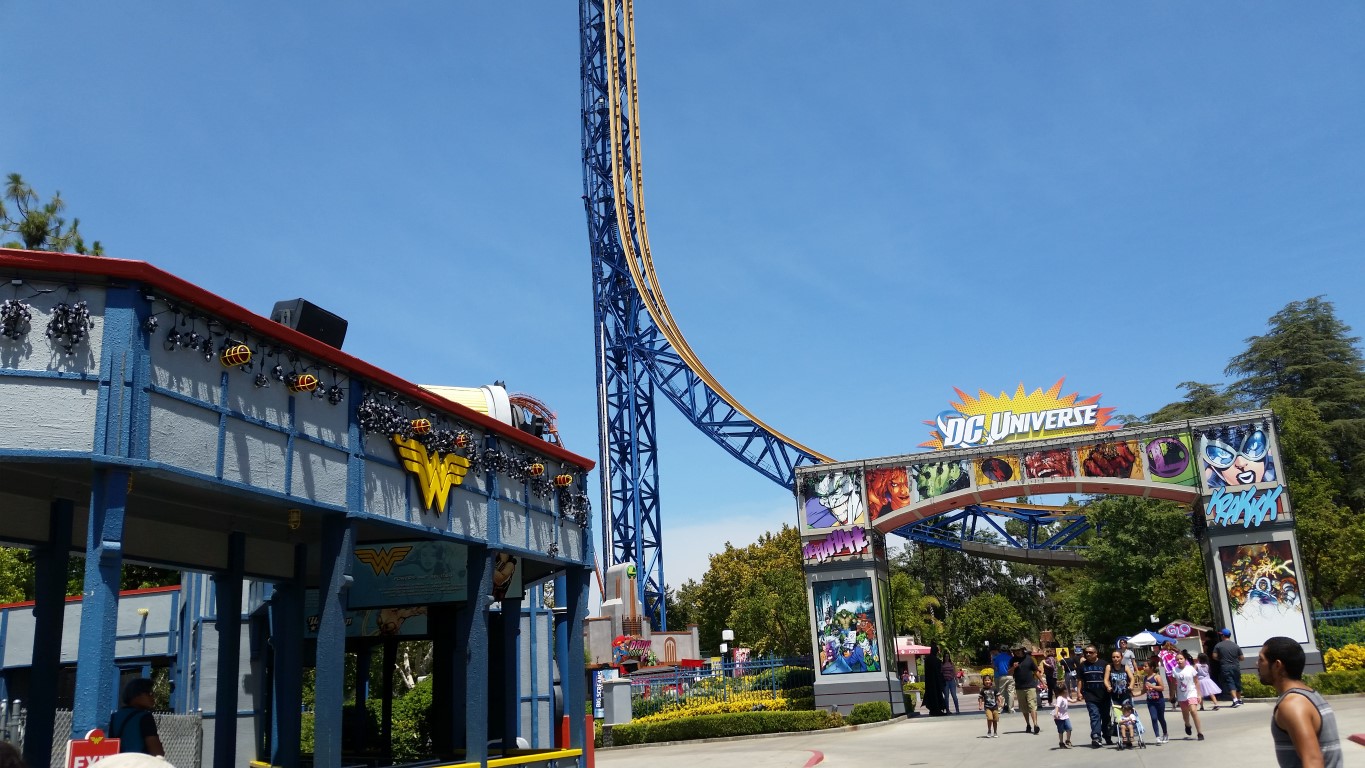 Here are some photos of the scare zone during Fright Fest, the new scare zone was introduced for the 2015 event and utilizes the same spectacular light show that Holiday in the Park’s Rockin’ Universe uses. 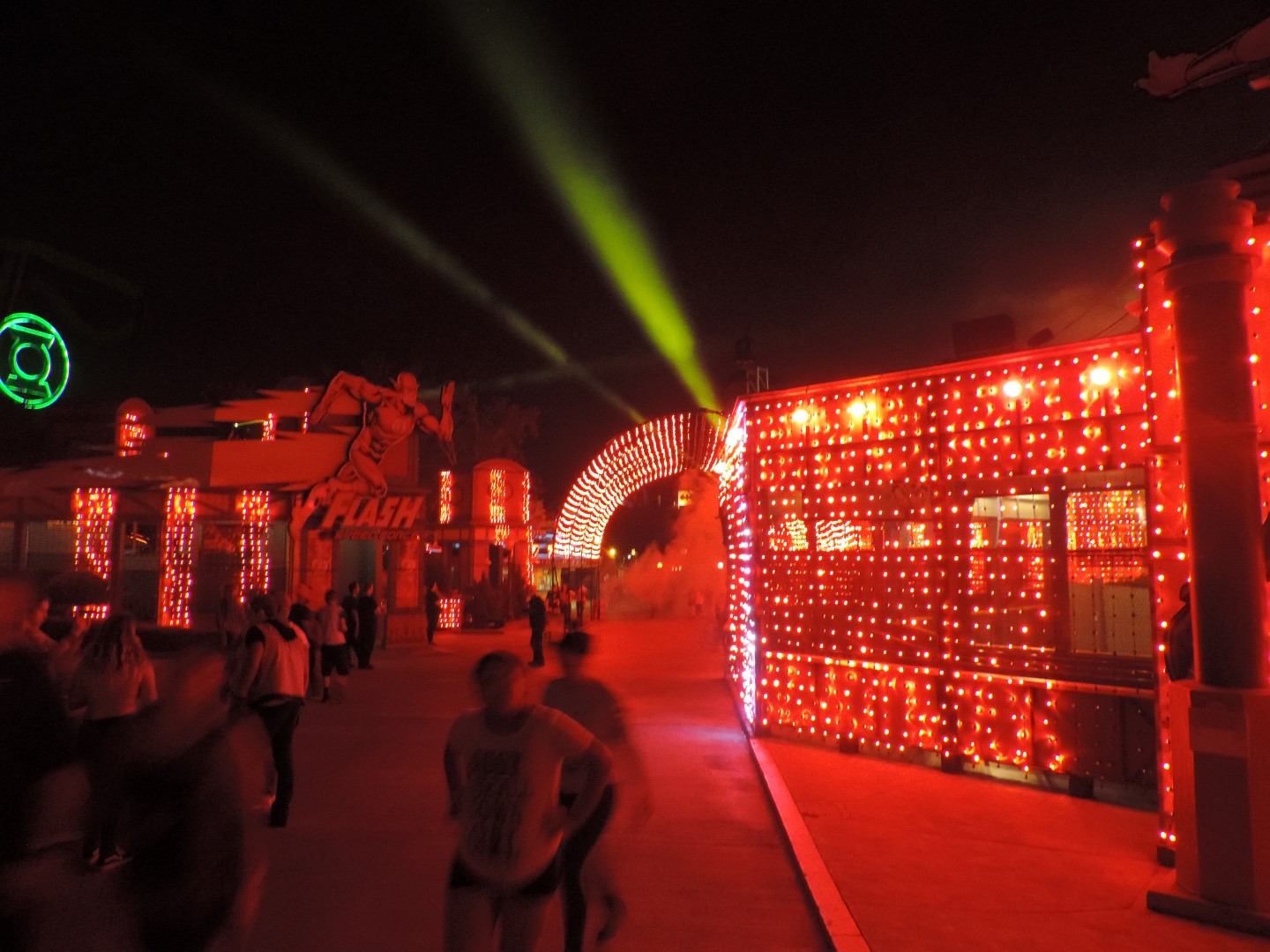 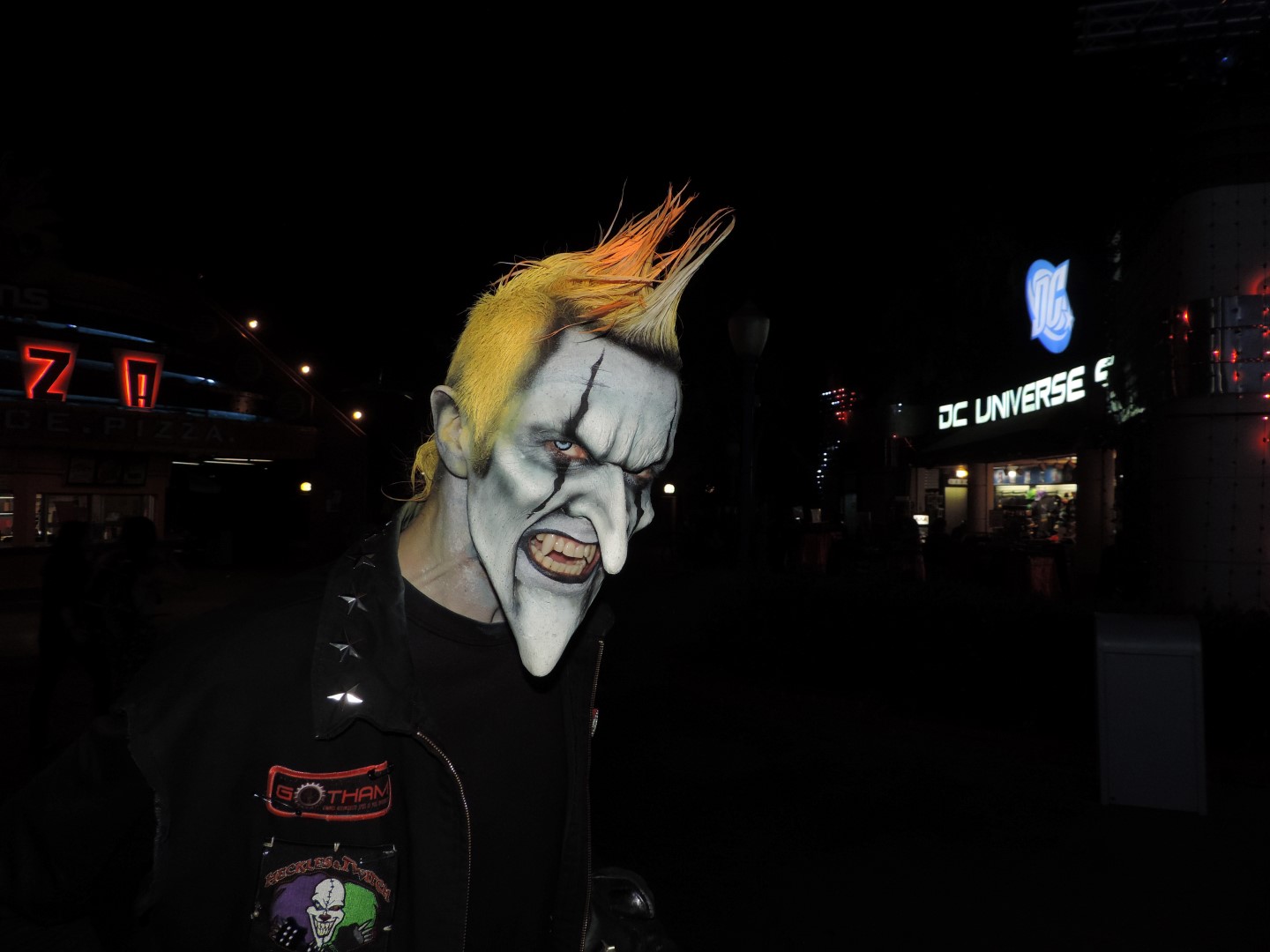 I think we forgot to include it in our last update, so here it is: the Street Fighter 5 game preview is now part of the Mike and Ike Game Zone, located next to the Golden Bear Theater. 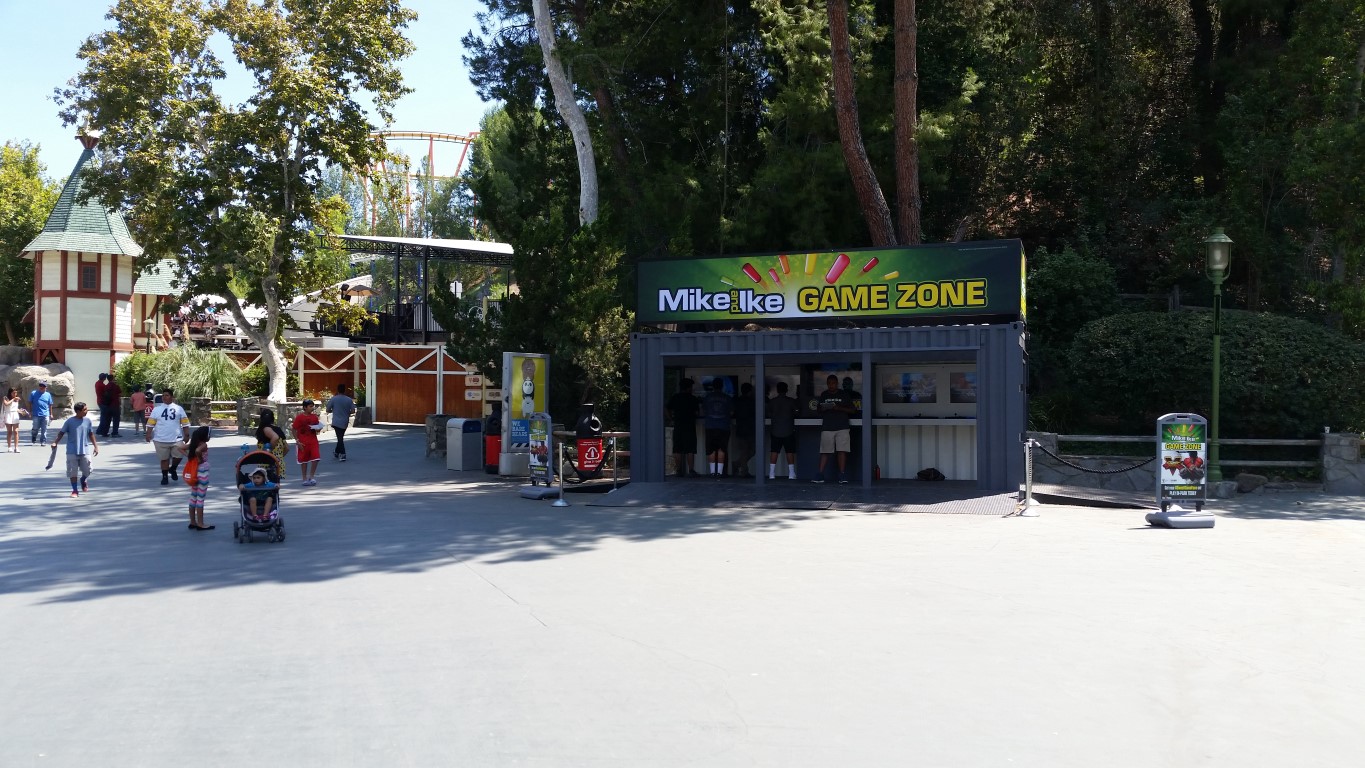 Apocalypse is undergoing track work after the ride started running very roughly recently. This being one of the turns recent work has been done. 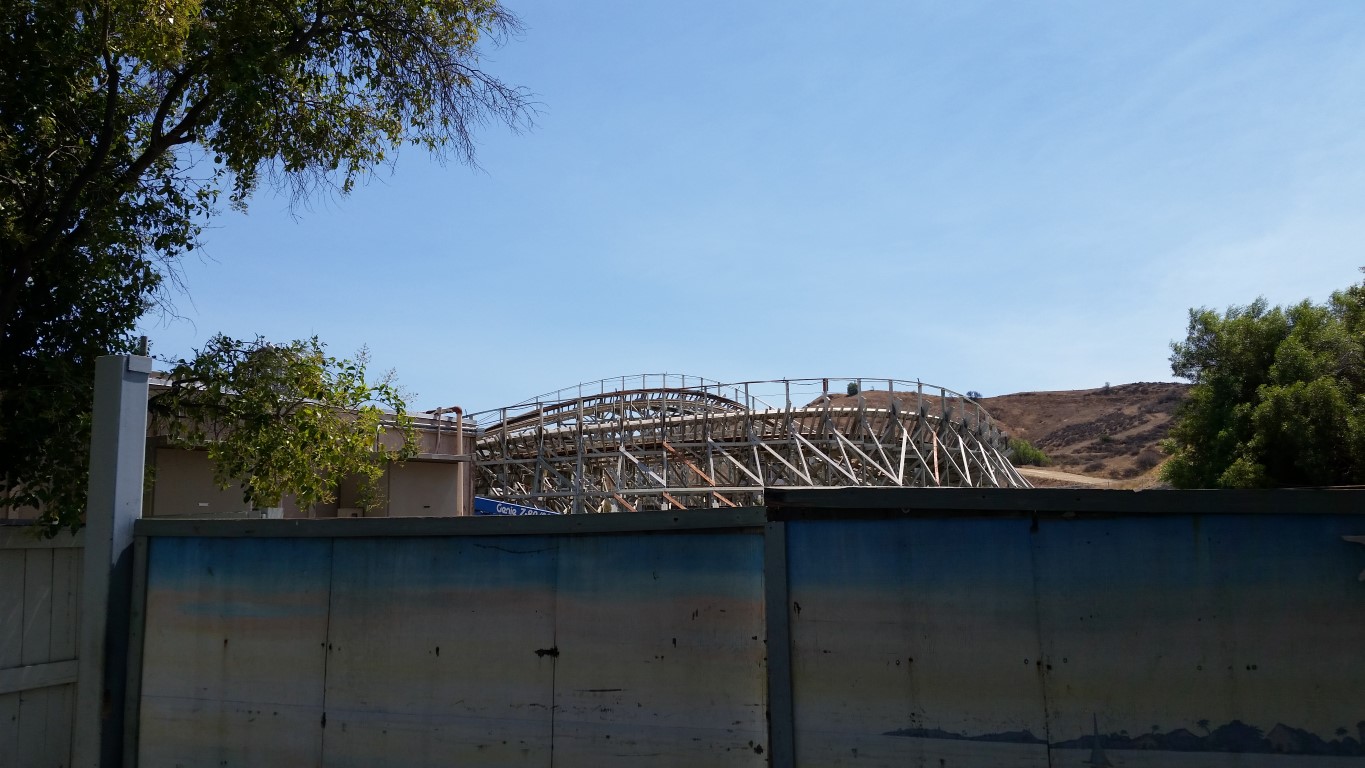 The track work seems to be extensive as the ride has been officially announced closed for a temporary period of time. There’s no staff on site, and the park’s official website states the ride’s temporarily closed as well. 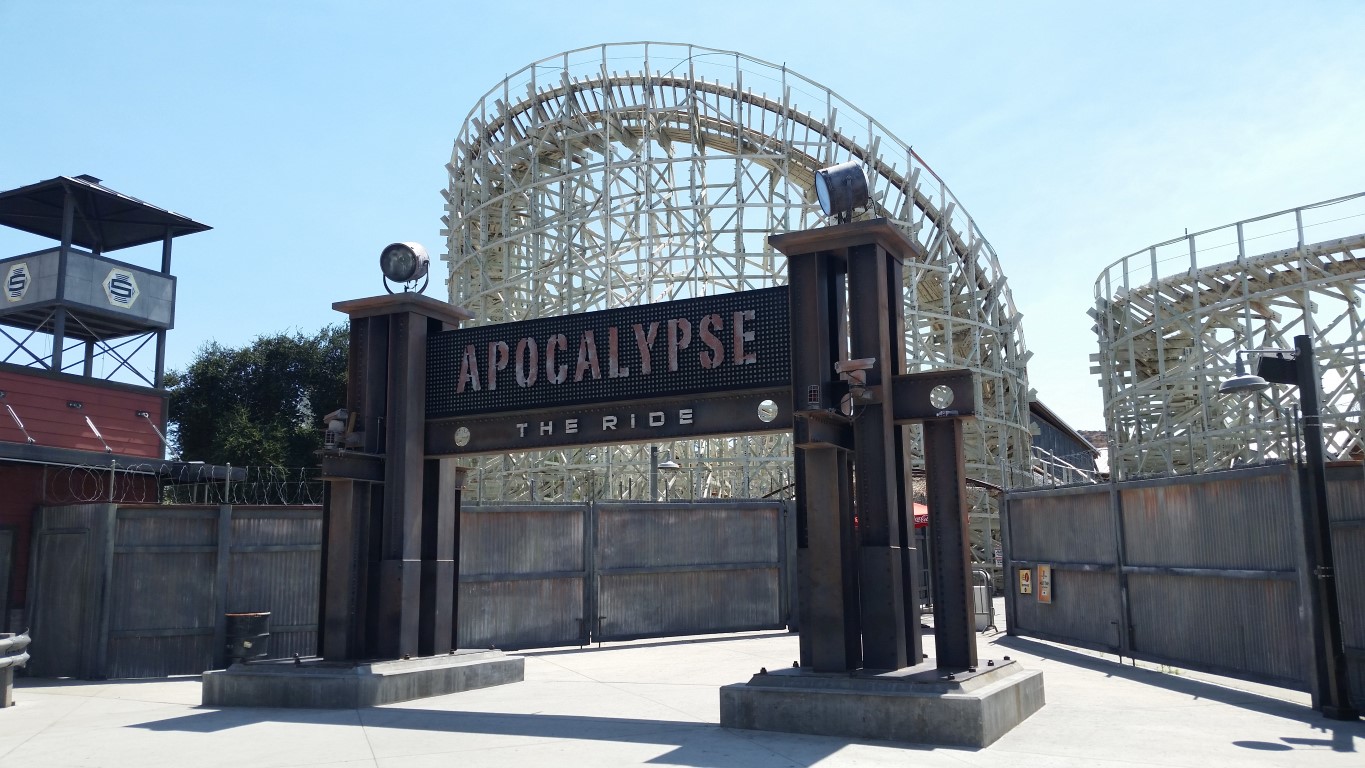 The entrance is blocked off with trashcans and a fence rather than the usual chain we see when the ride’s closed for a shorter time. 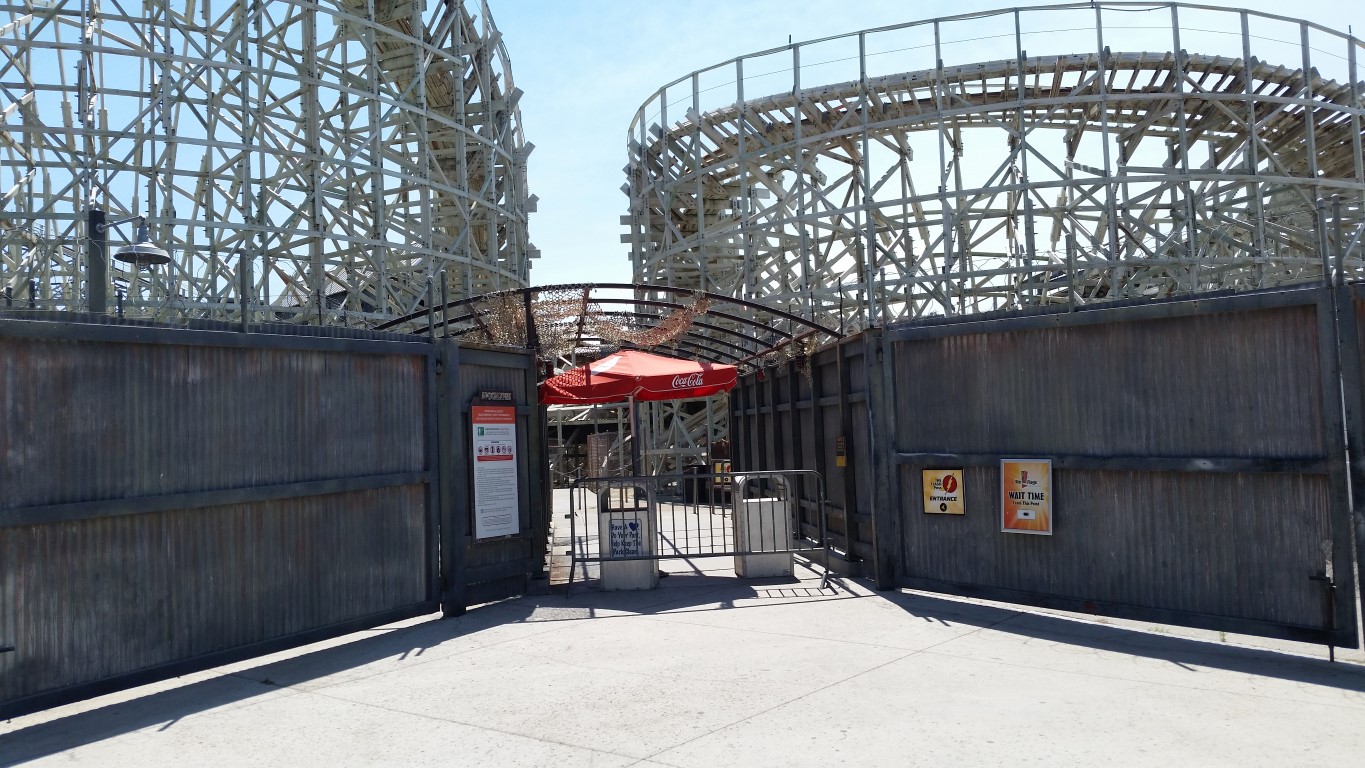 Look it’s Scream! – The underrated easily-forgotten-about coaster that we actually happen to like a lot 😛 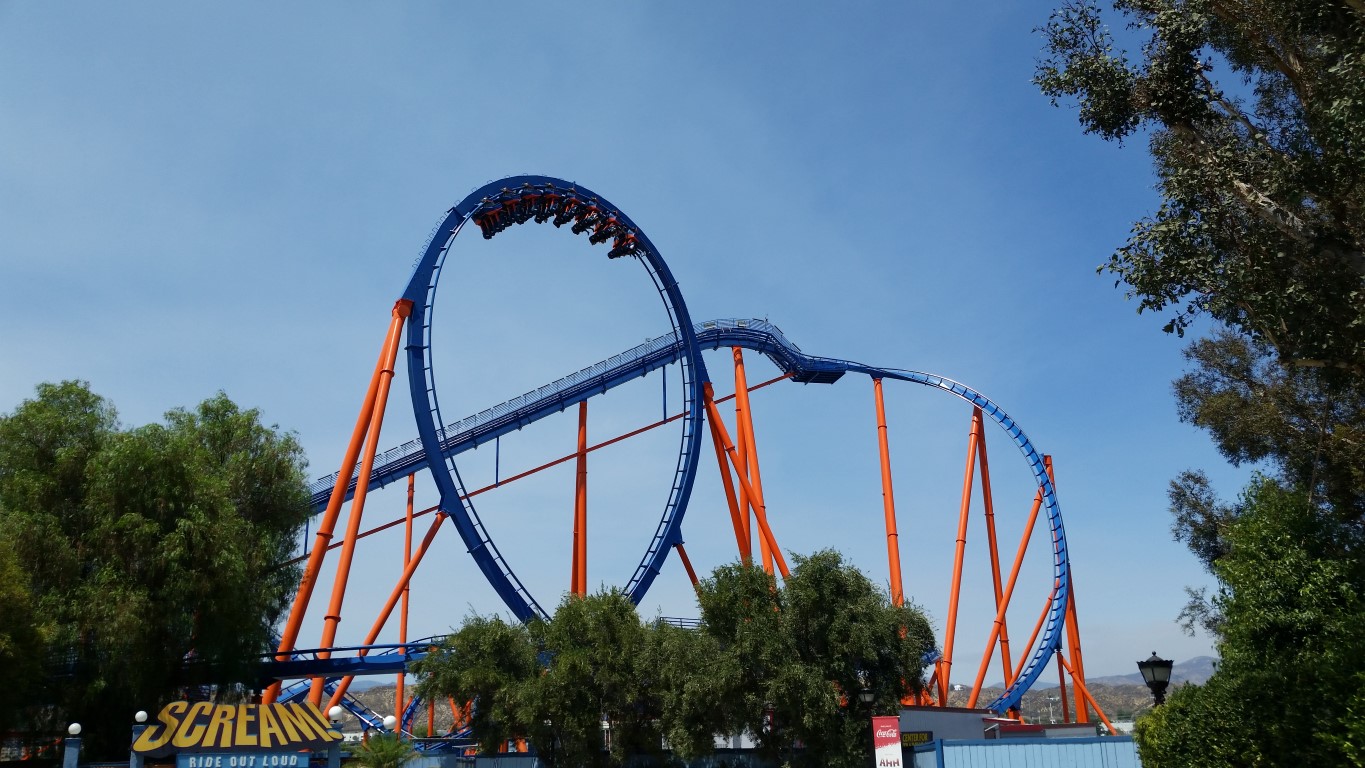 But next door is a ride we like a lot more… TWISTED COLOSSUS!  Which’ crew has been incredibly great lately. A lot of dispatches resulting in racing! 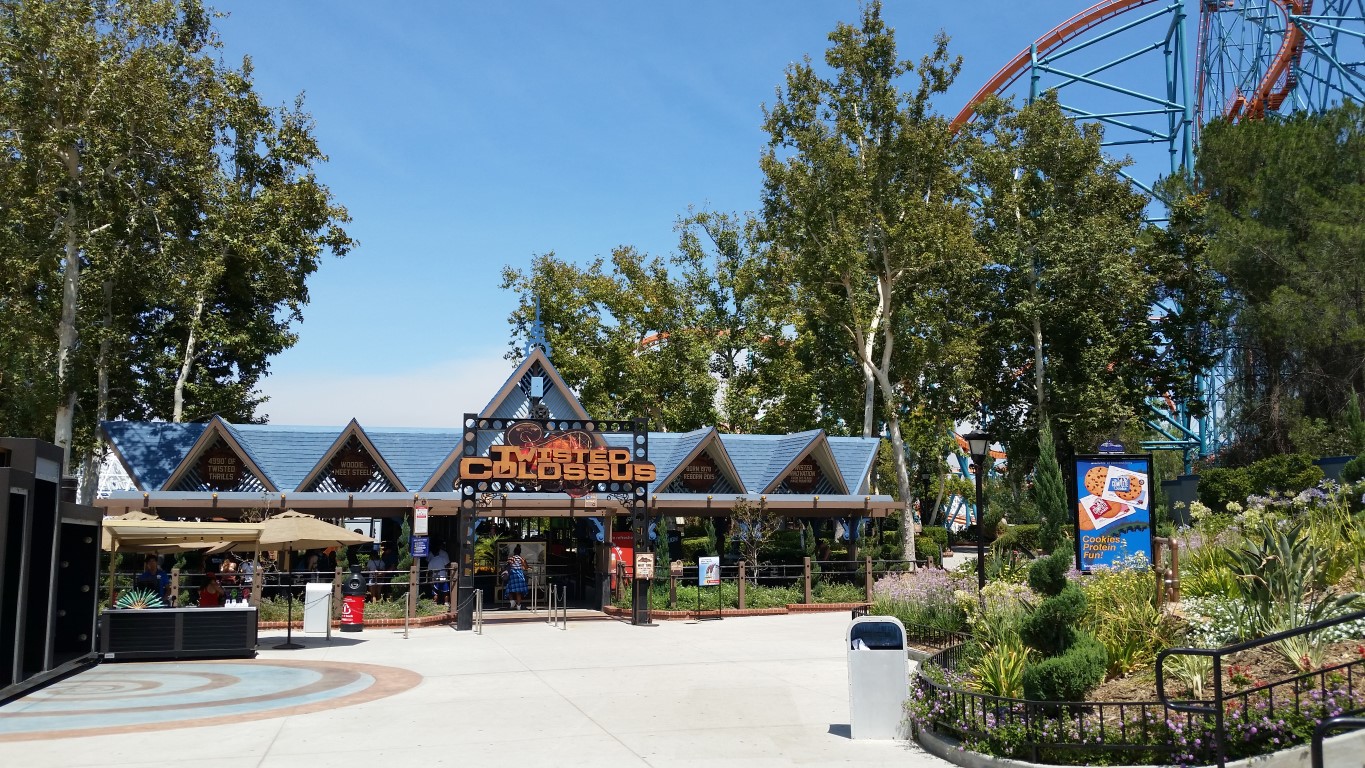 If you’re riding Twisted Colossus any time soon, chances are that you get to race. It’s been a while since we’ve seen a crew that put this much effort into getting trains to race. 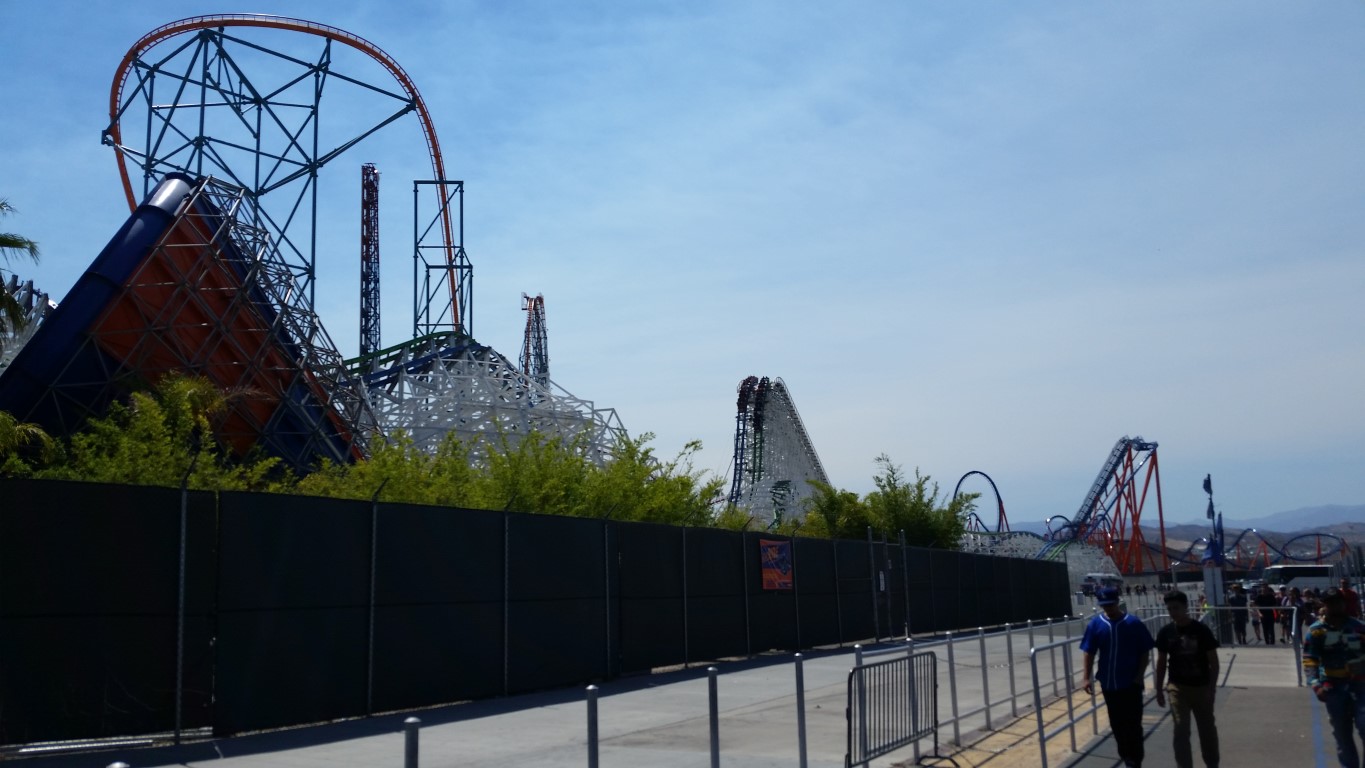 Of course there’s an occasional no-race ride, but oh well. Awesome RMC nonetheless! So let’s end this update with this solo-shot of Twisted Colossus from today. 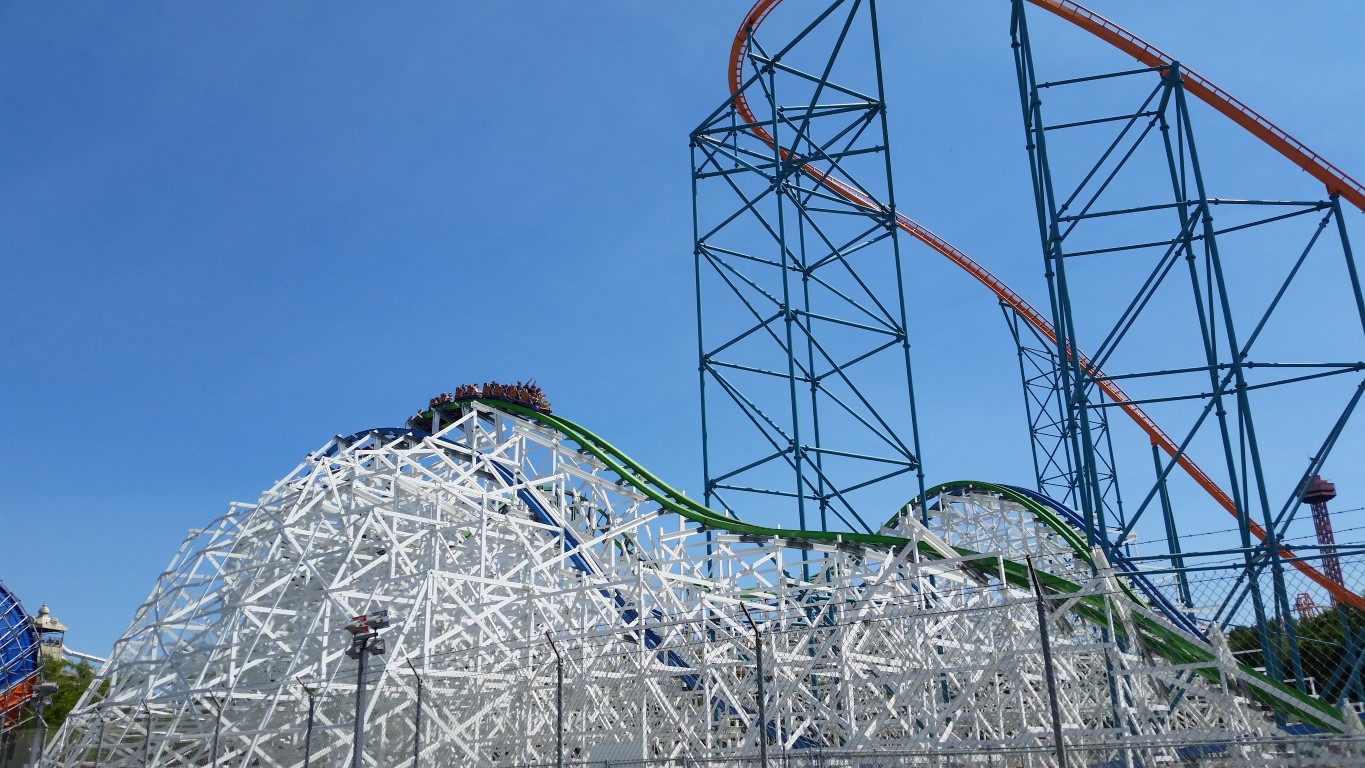 Thanks for checking out this Six Flags Magic Mountain Update! Make sure to check out other recent updates and trip reports: