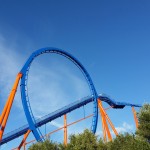 It’s been an interesting Holiday filled weekend and week for us last week. Today we’re back with a regular update and construction update. There wasn’t quite enough to report on to make two separate posts, so here’s a Six Flags Magic Mountain and NEW REVOLUTION Update!

Let’s start with something I noticed last week, the fact that the park has been working on bettering the flow of people at the metal detectors. They have temporary lines, which should help reduce the chaos one may find on a busy morning. 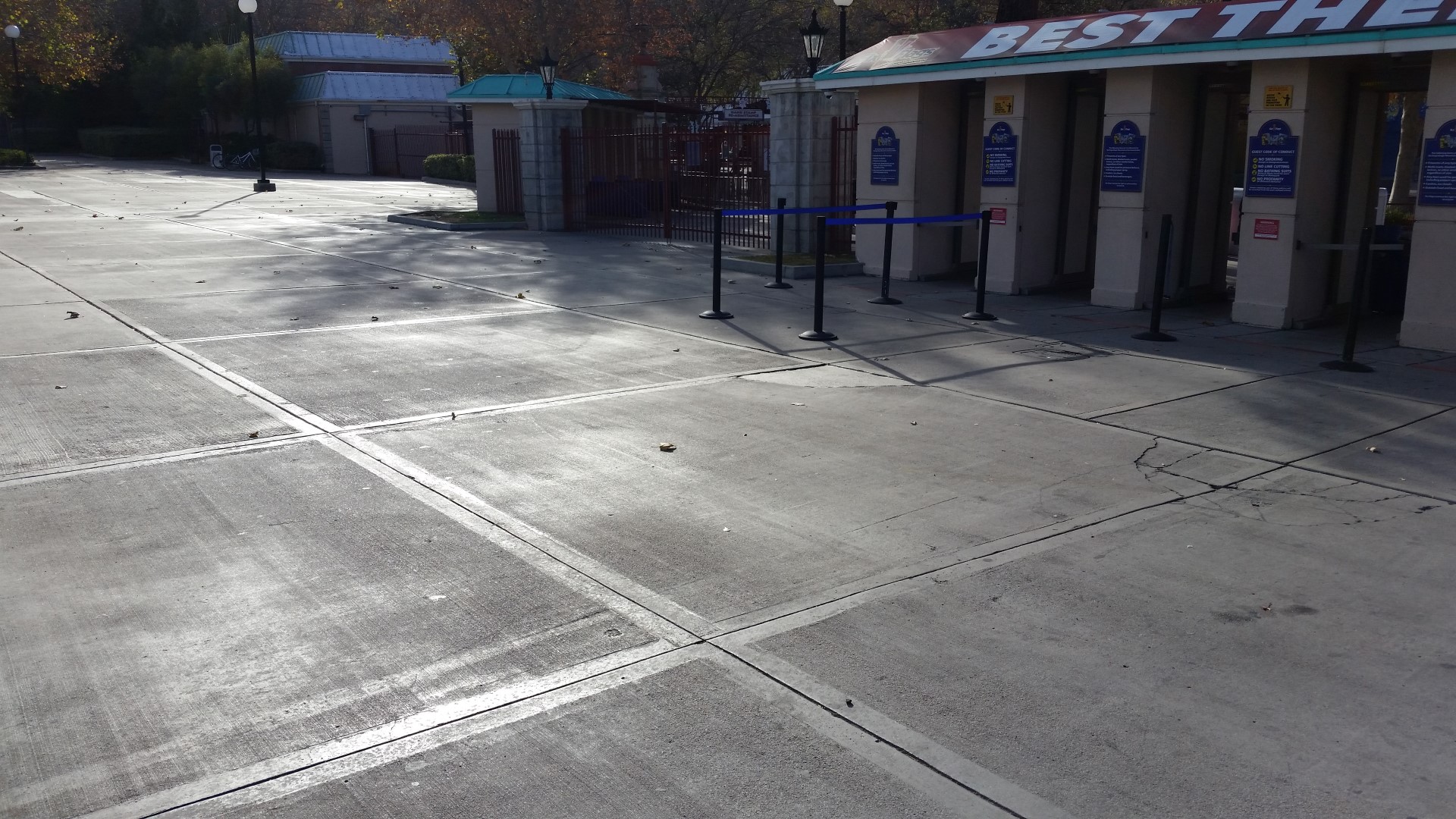 Next up is a new three-sided ads display over at the entrance to Baja Ridge. Nice positioning near the New Revolution as well. 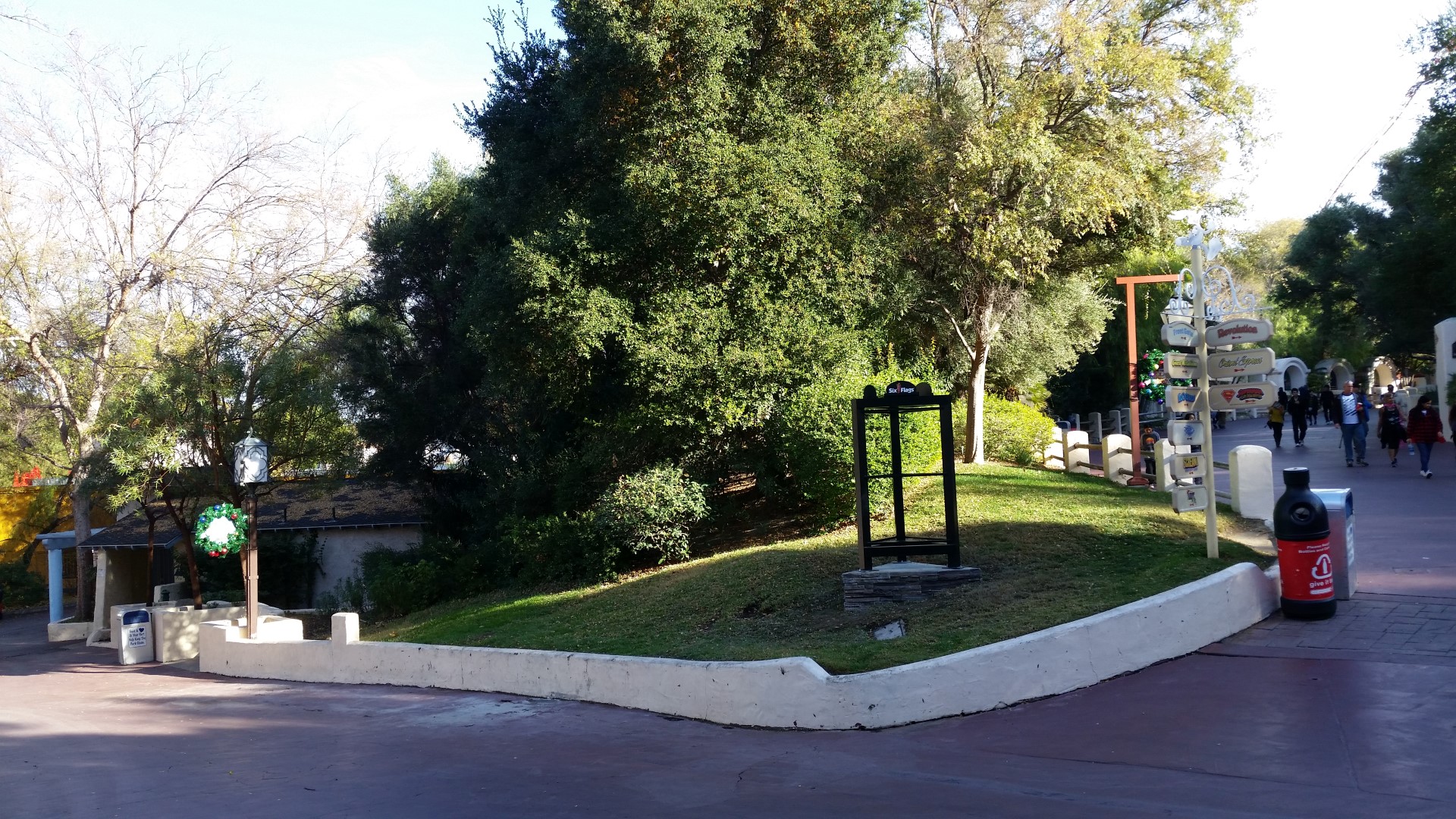 Speaking of new structures, over at the Water Front on the side of the pizza place. a new out-door grill kind of structure is being constructed. 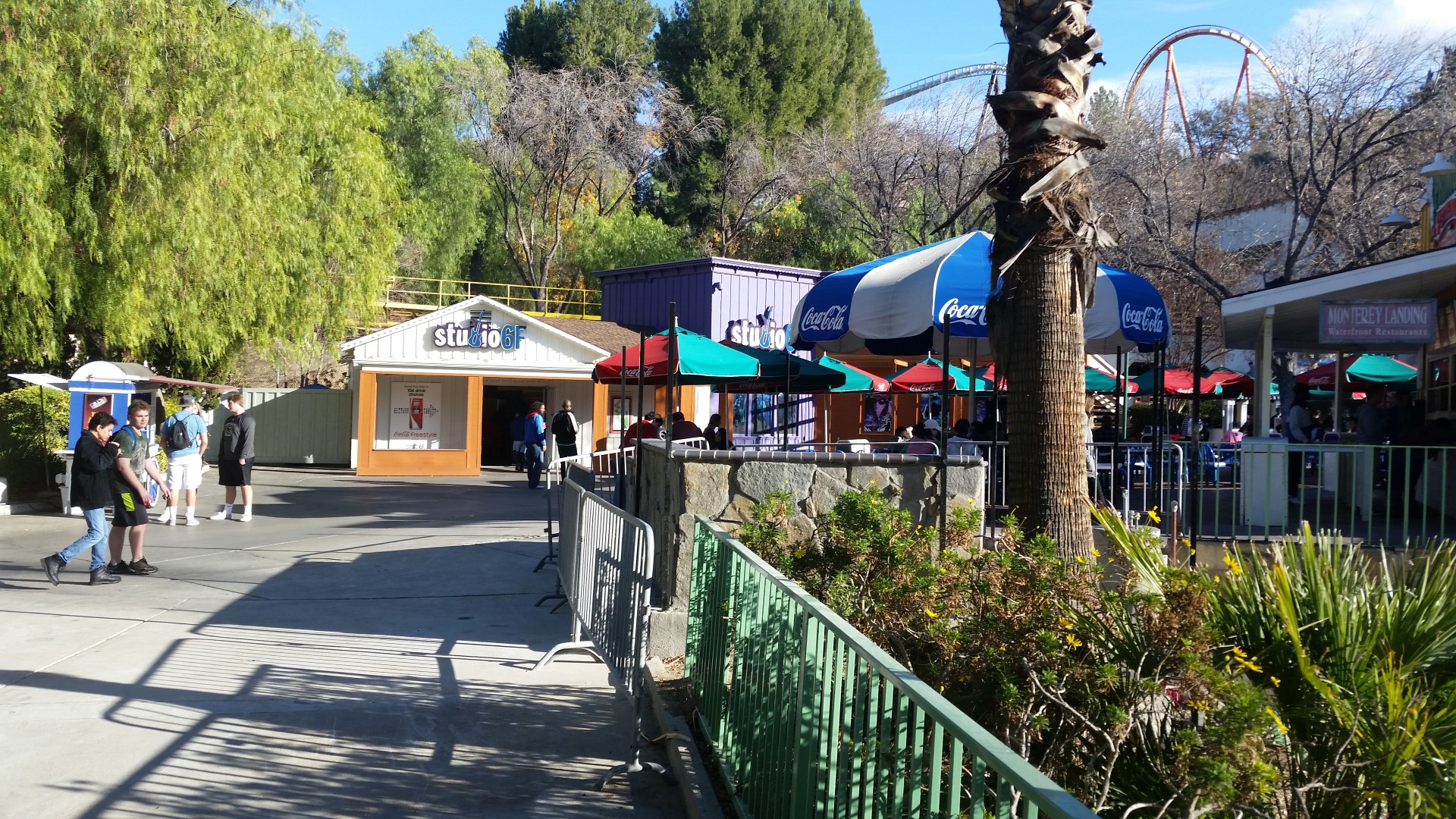 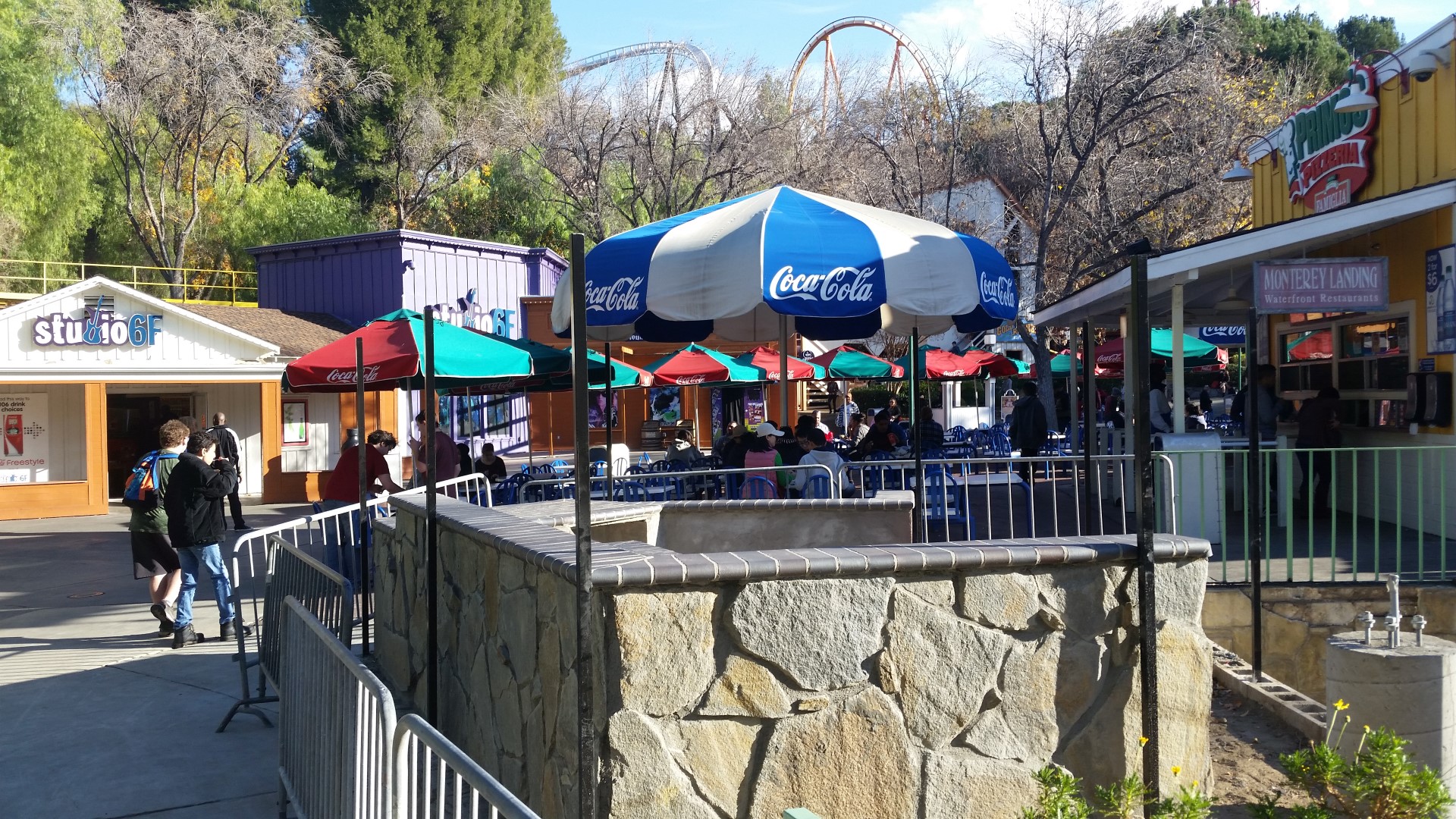 Moving on to rides, Jet Stream (I believe I touched on this in past updates, but just in case) will be closed for refurbishment till February. 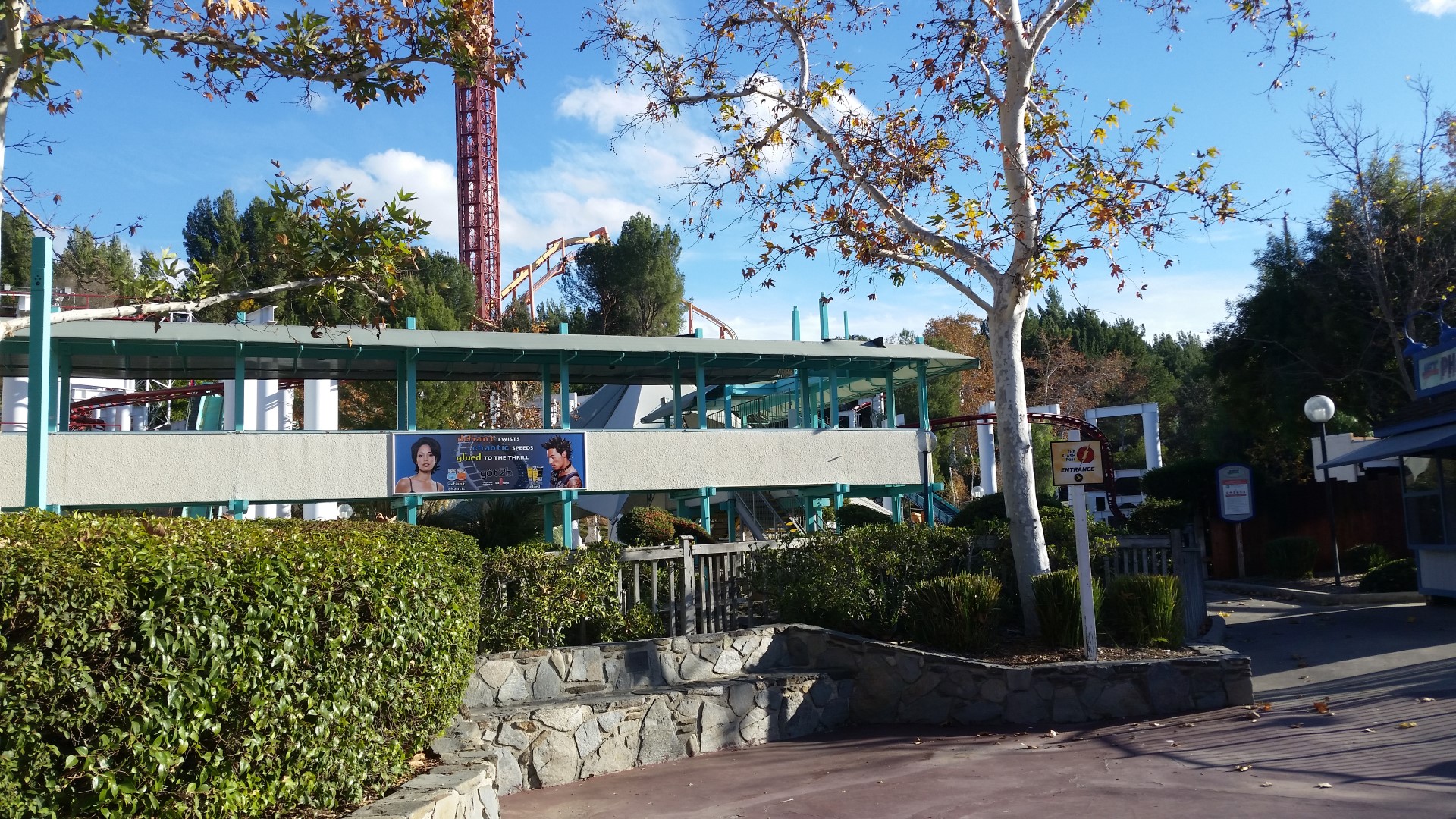 Funny enough the park is still running at least one water ride, Roaring Rapids. If you’re fine with being soaked while there are some chilling winter temperatures out, this may just be your ride to go on this winter. 😛 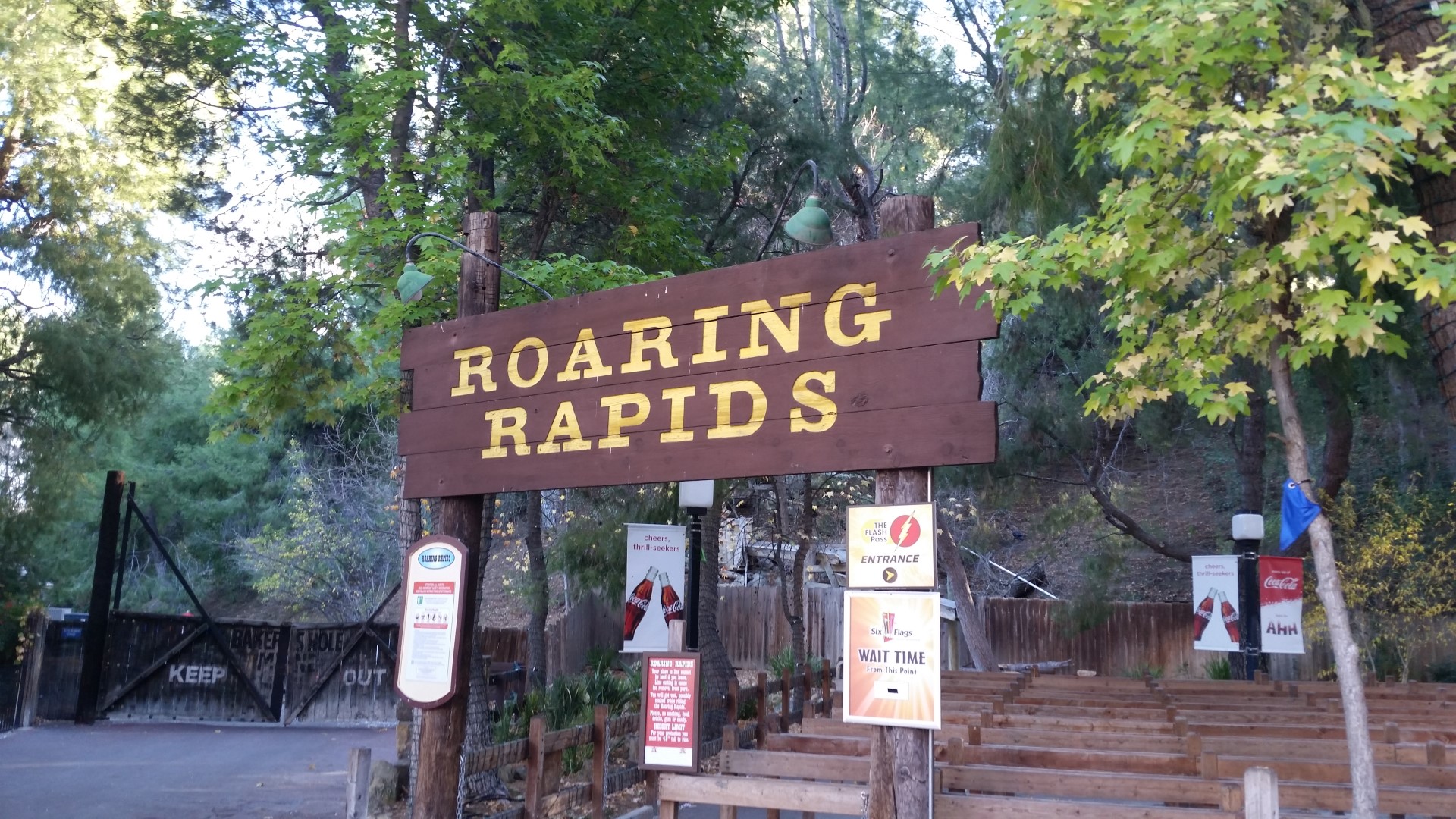 Tatsu was only running one train today, now this was around 2PM before the storm pulled into town. 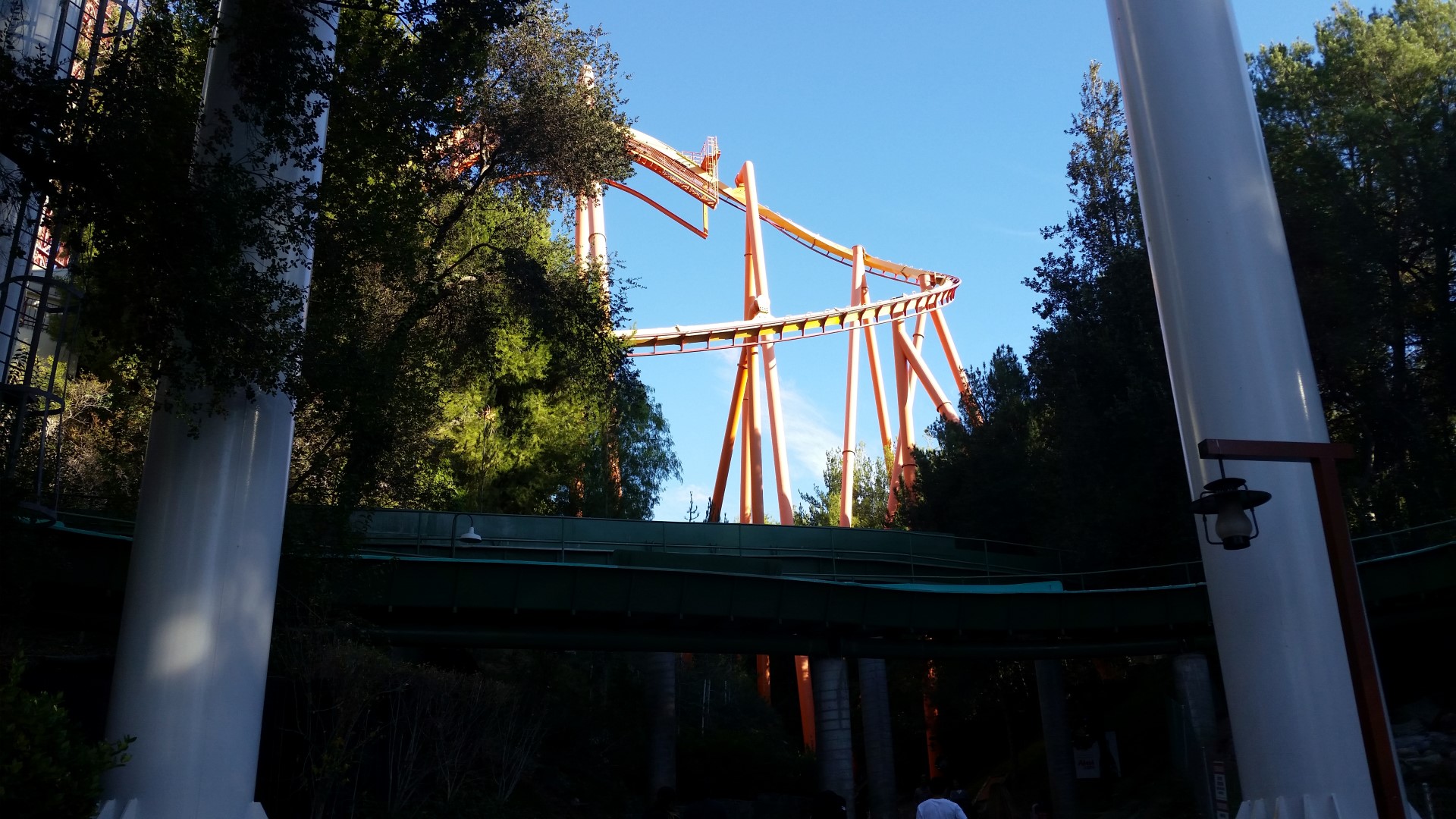 Same counts for Full Throttle that has been down to one train for several weekends now. Hopefully we soon see it back to two trains, the end of December can get incredibly crowded at the park. 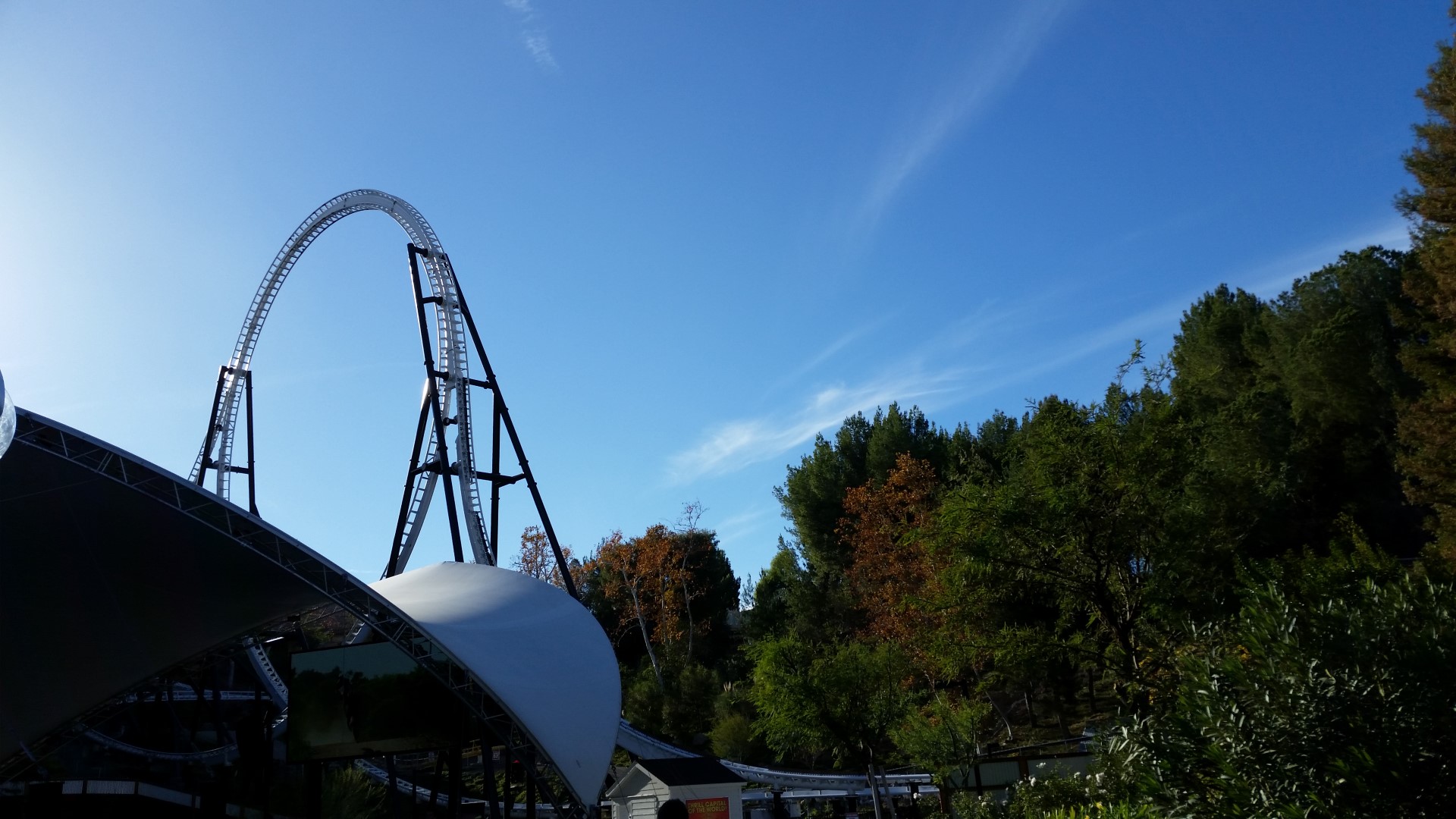 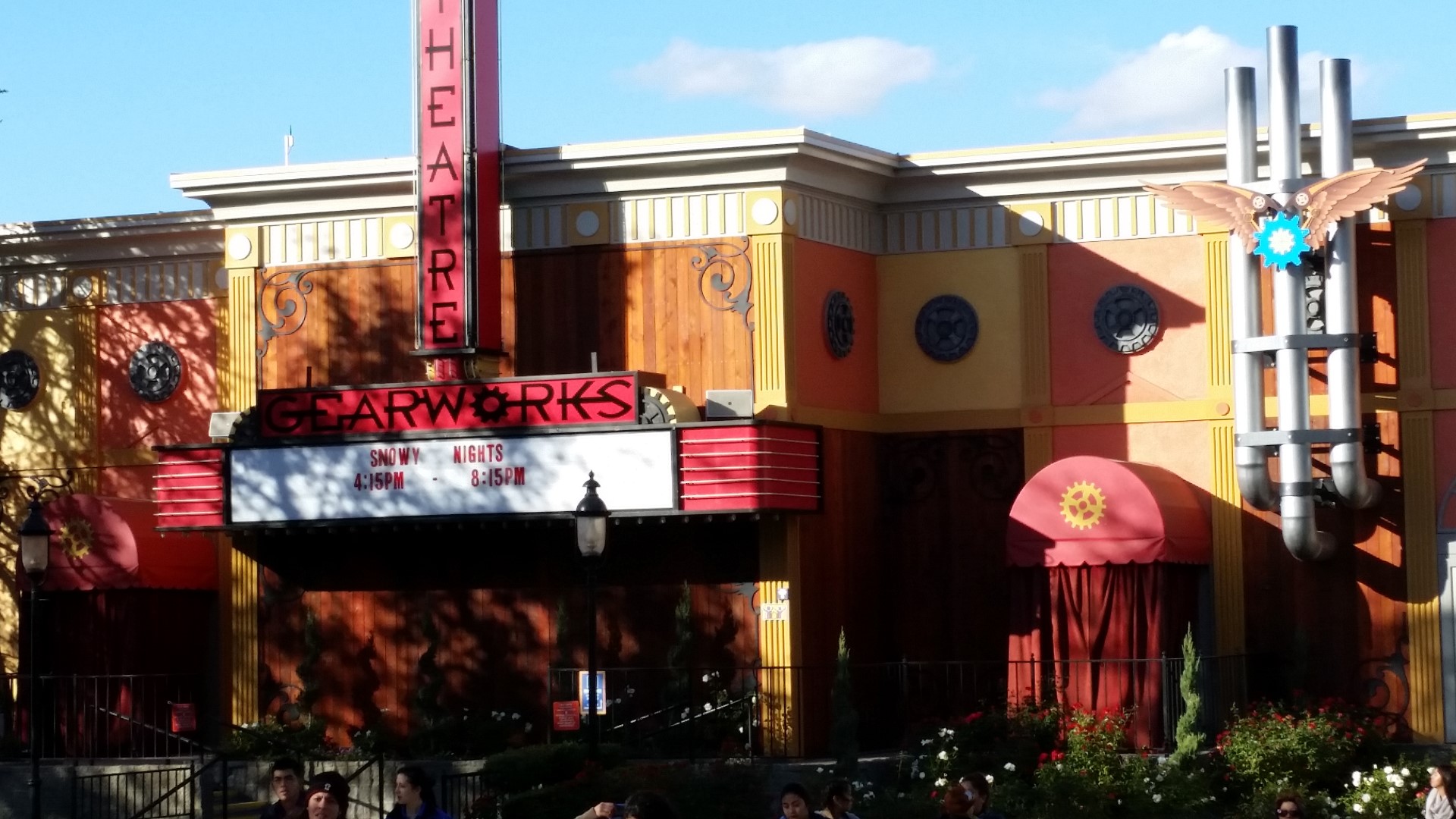 Scream! was looking pretty today. Now that paint job has been worn in a little, with this summer’s sun beating down on it, it looks a tad less bright but still very pretty. Now I TRULY hope Tatsu is indeed getting a repaint this off-season. There are a few indications, but hasn’t officially been released whether or not it’s indeed receiving a repaint to compliment the New Revolution. 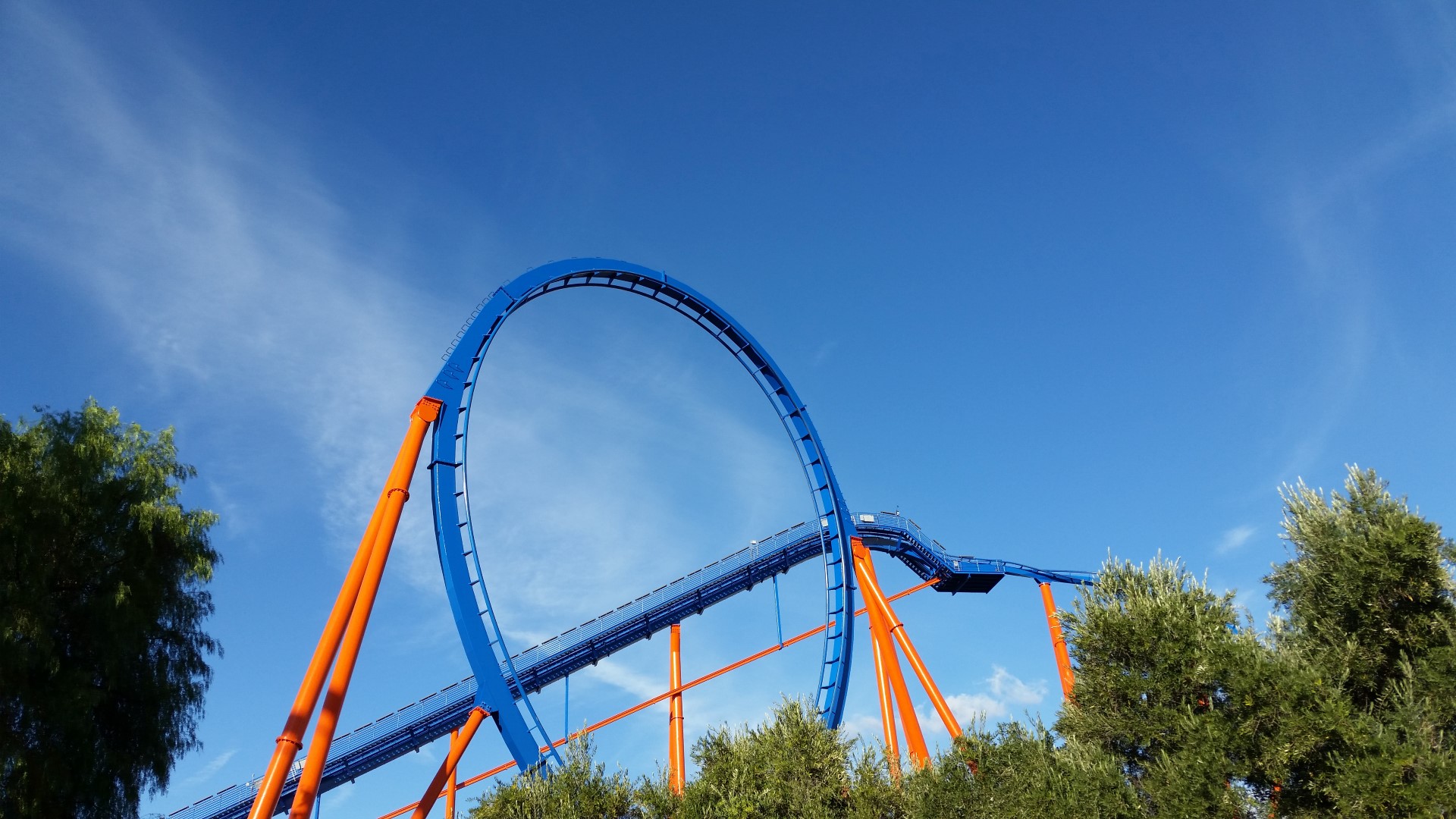 Across from Scream! Twisted Colossus’ storage tracks have finally received a storage building. Which is now completed. 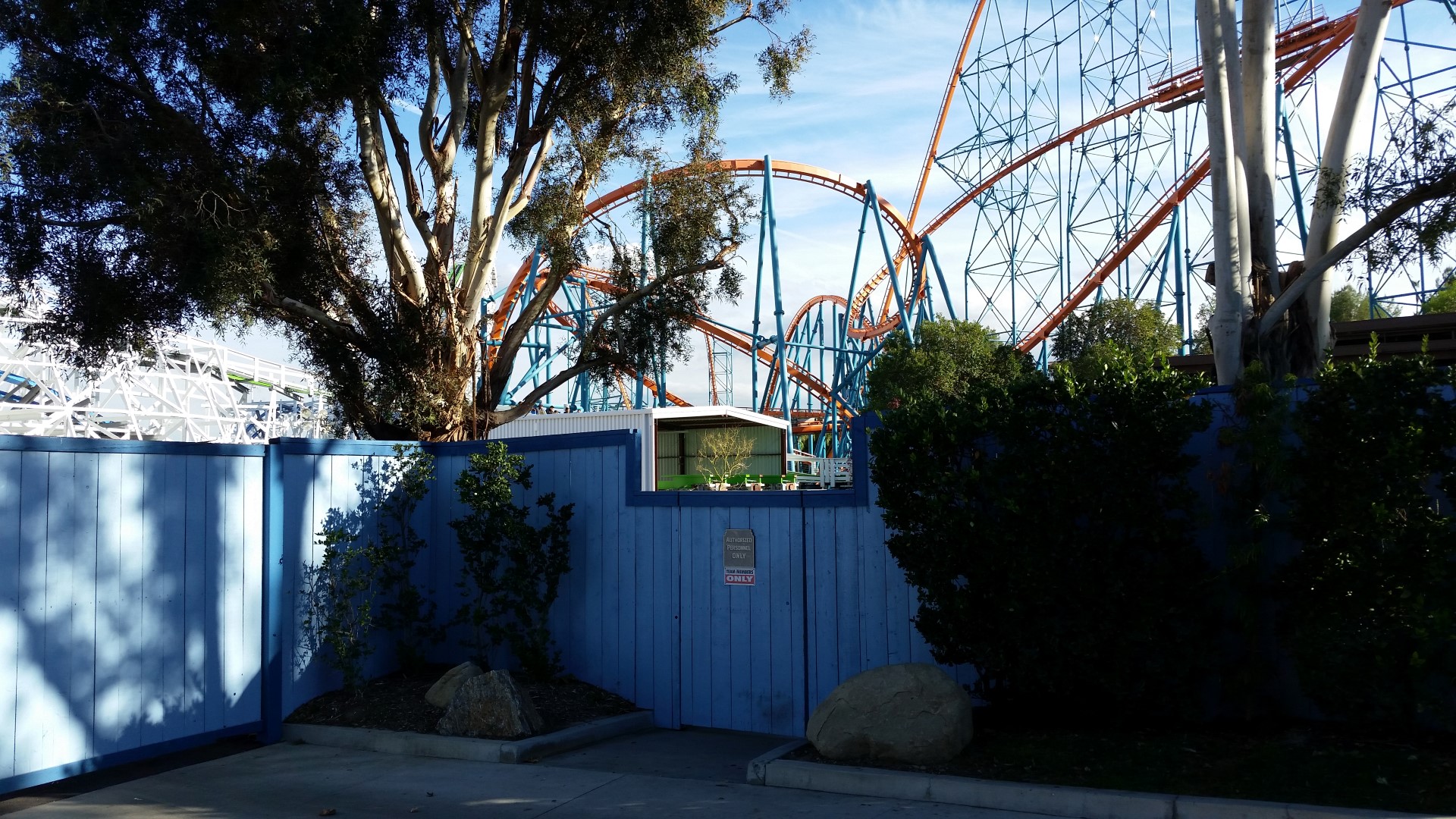 It looks alright, pretty basic, but a storage/ maintenance building doesn’t need to be much more than this. 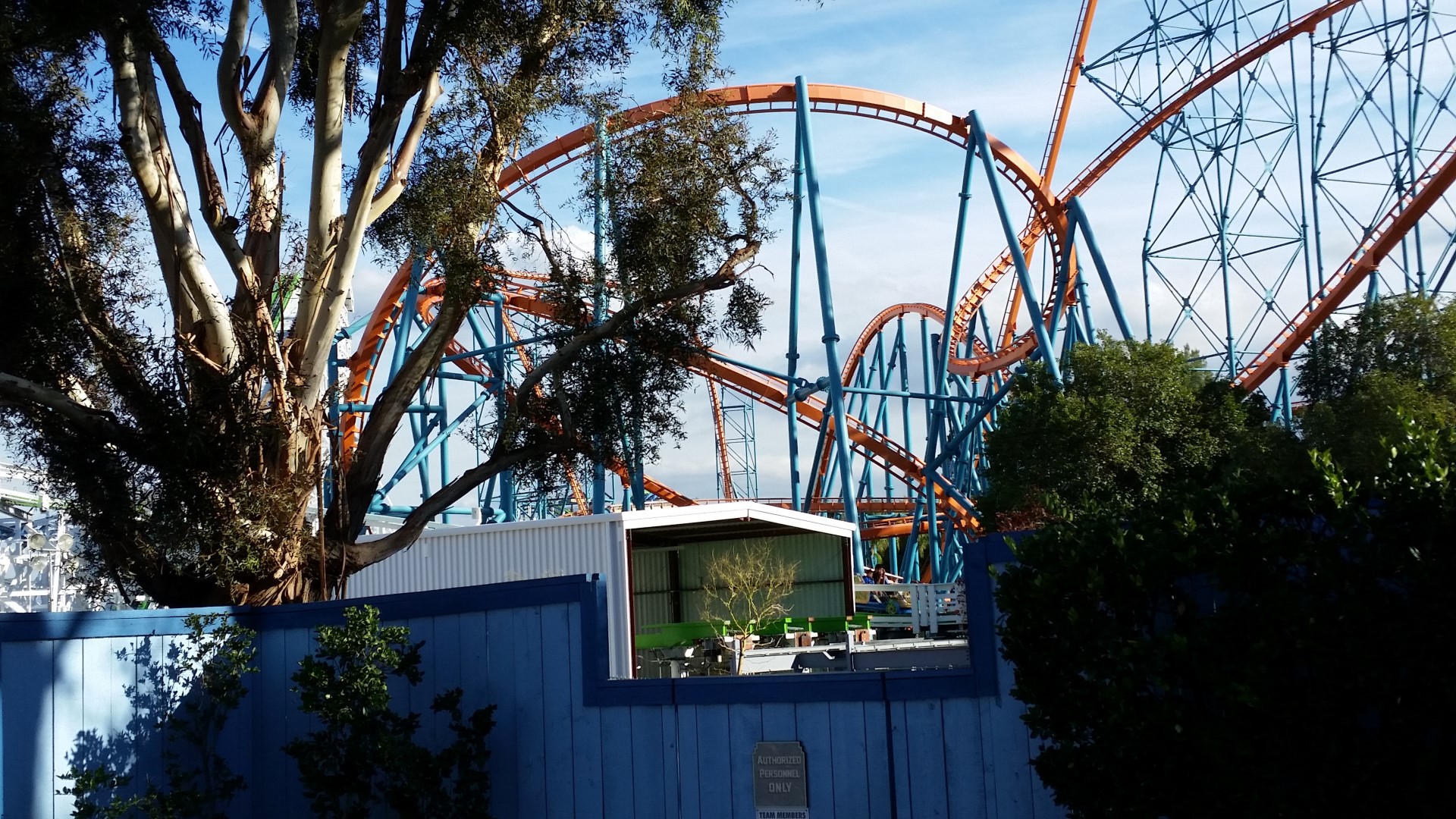 Let us move on to the 2016 addition to Six Flags Magic Mountain. The refurbishment and make over of the Classic Revolution to become THE NEW REVOLUTION!

Markers are placed all around the exit path. This was filled with dirt not too long ago, now the concrete path is visible again. The markers are located on both sides of the path, touching the edges, indicating there may be a new fence/wall surrounding the path. 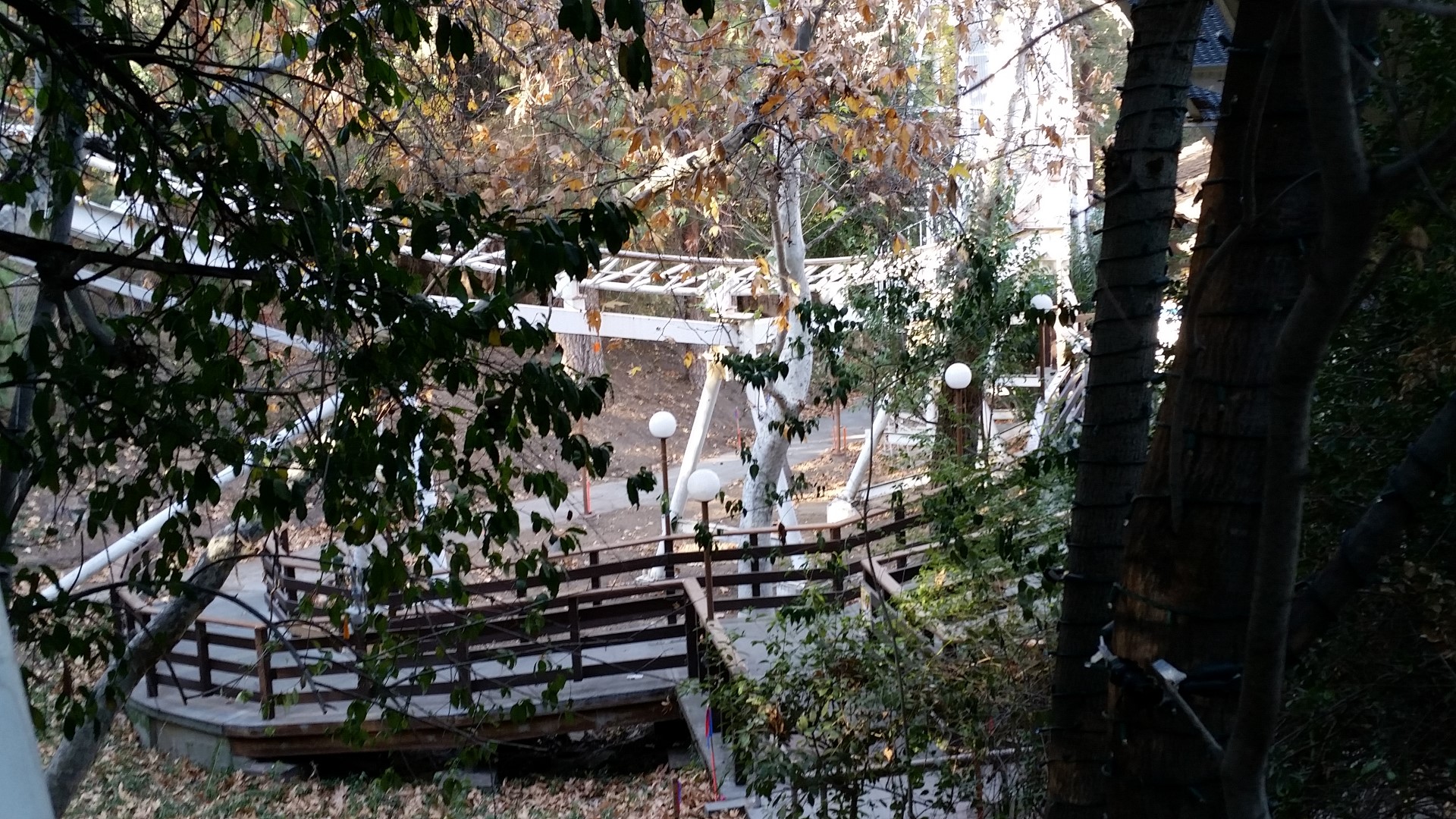 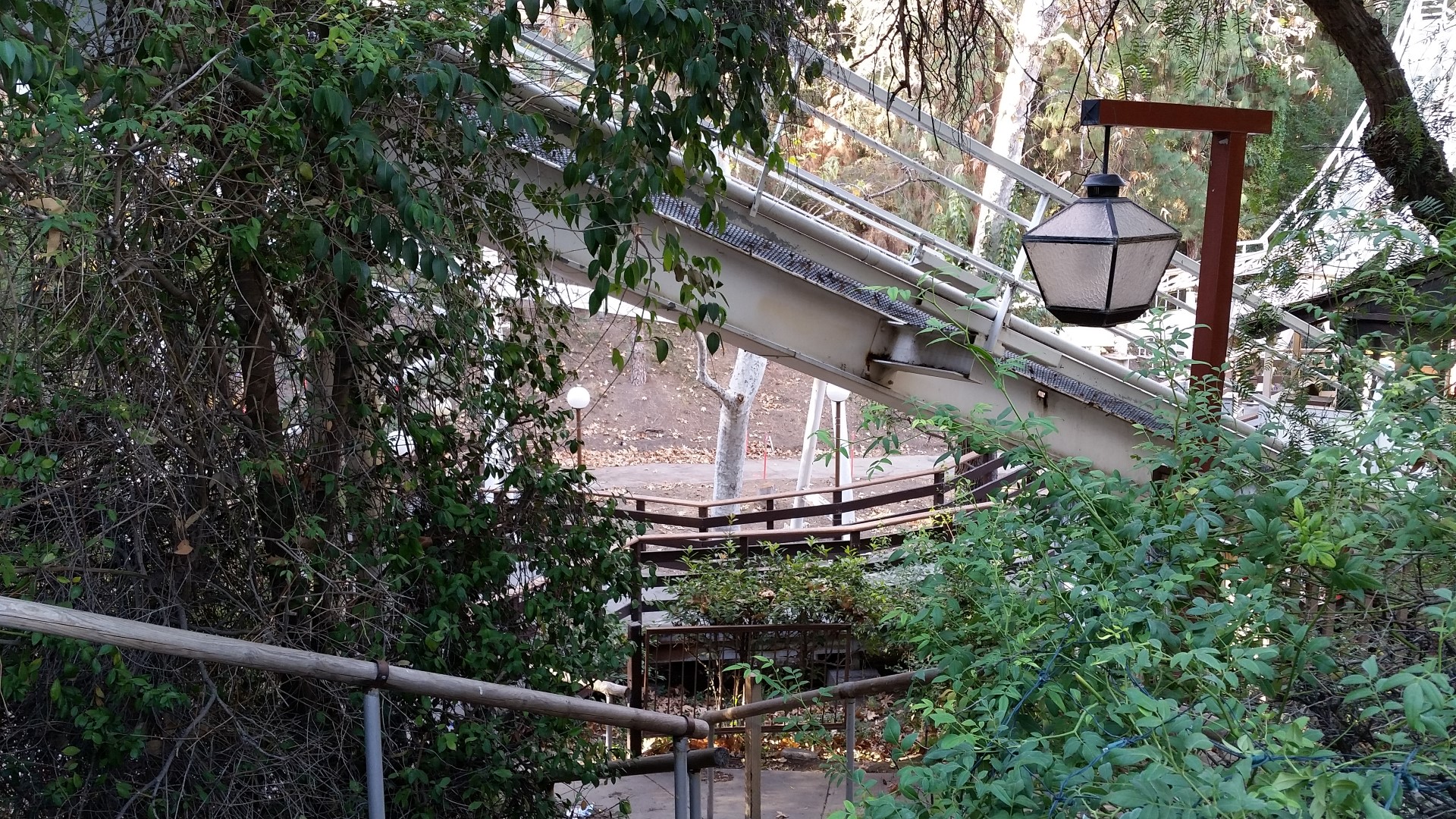 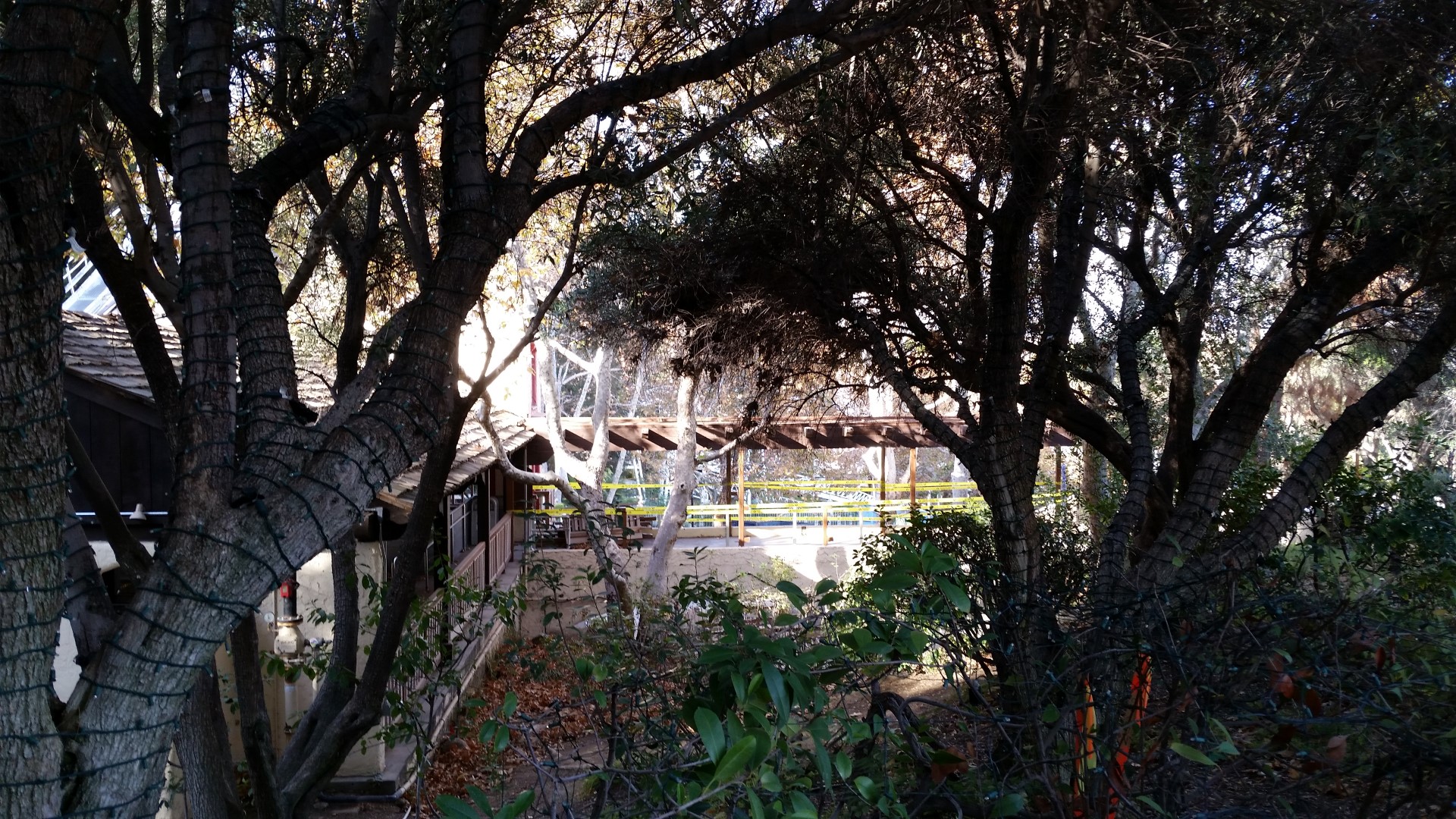 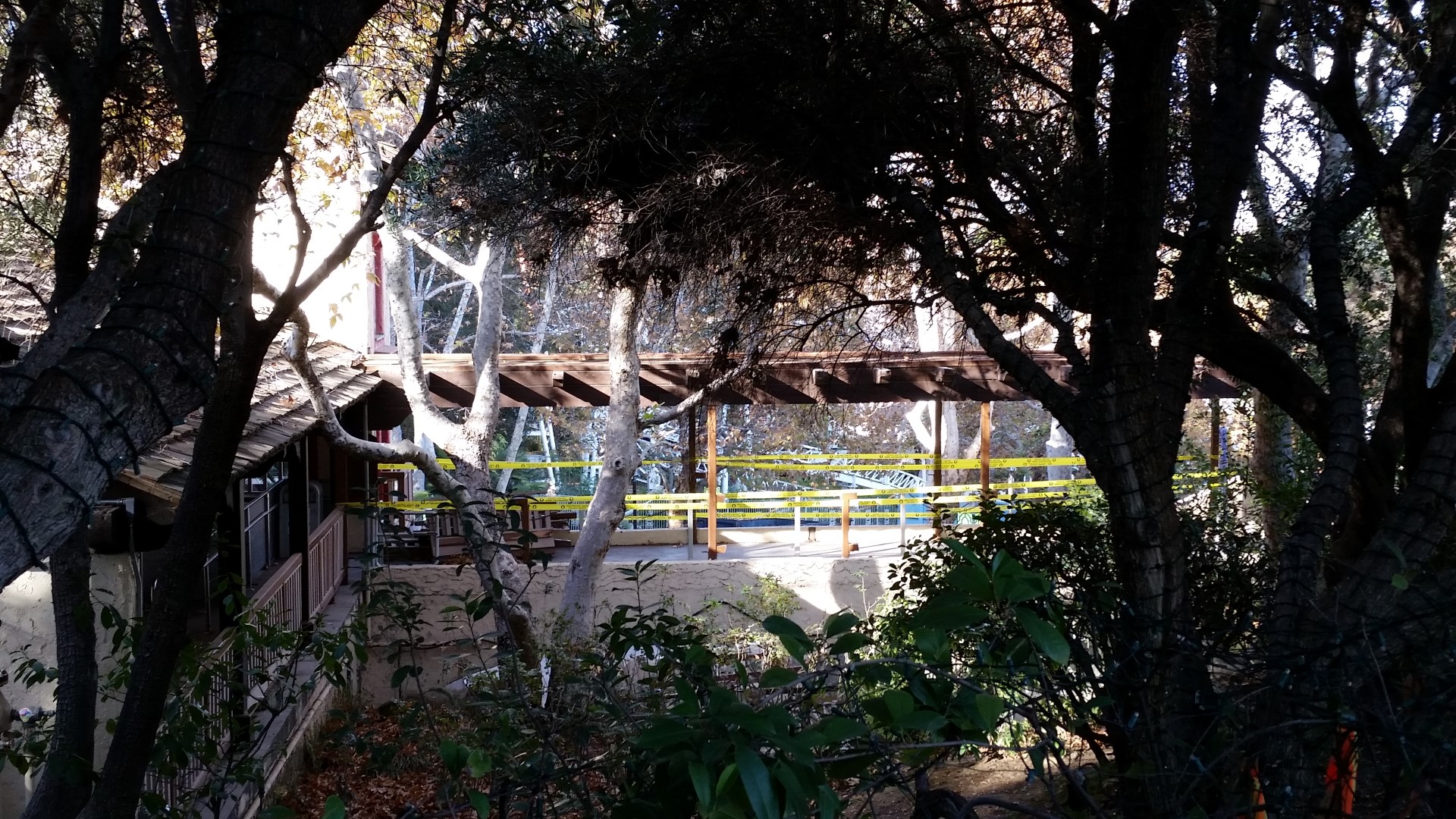 Around the ride’s station we find more markers. 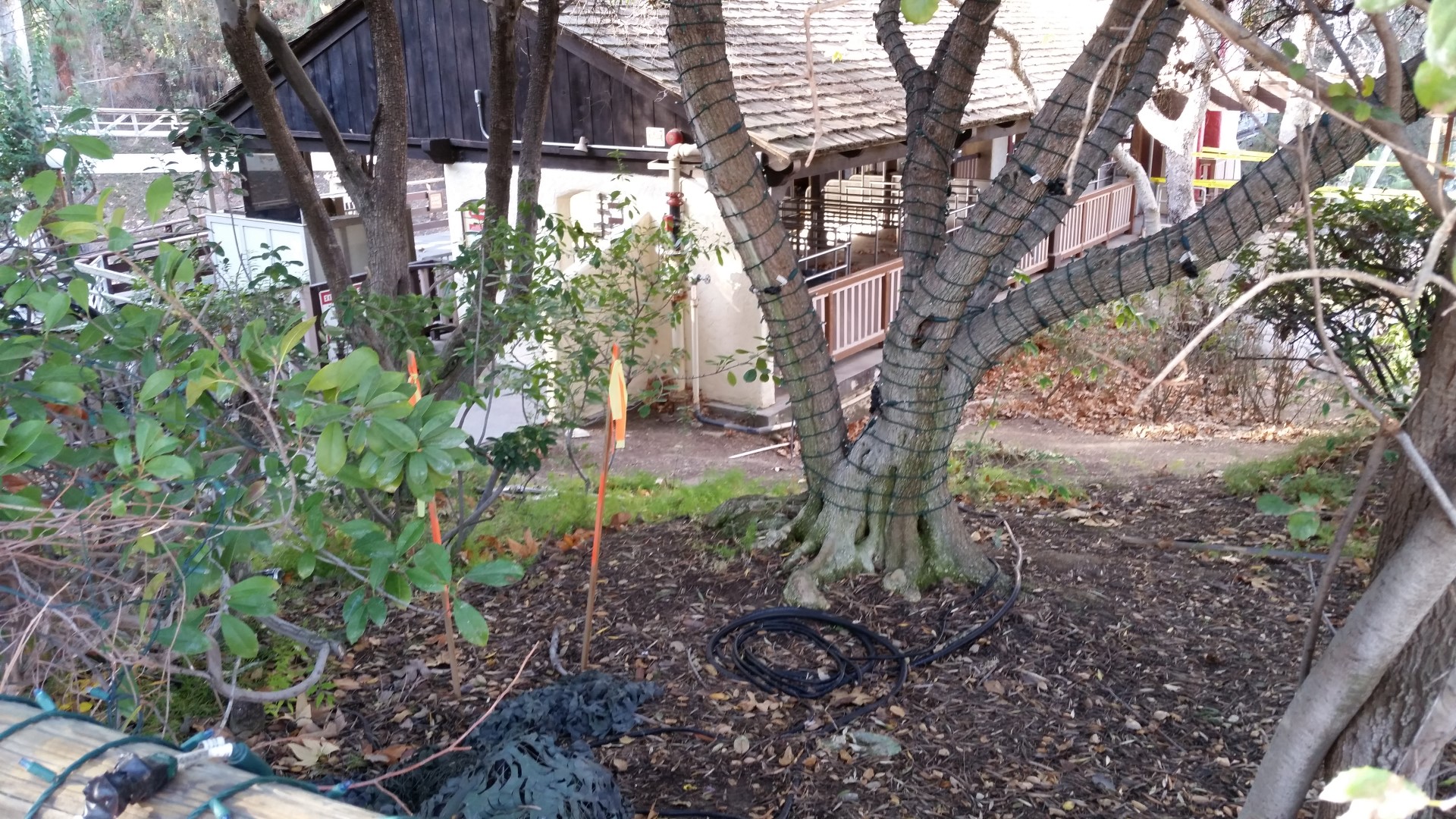 Here is a view of the ride’s line approaching the bridge. Not too much has been changed as far as I’m concerned. 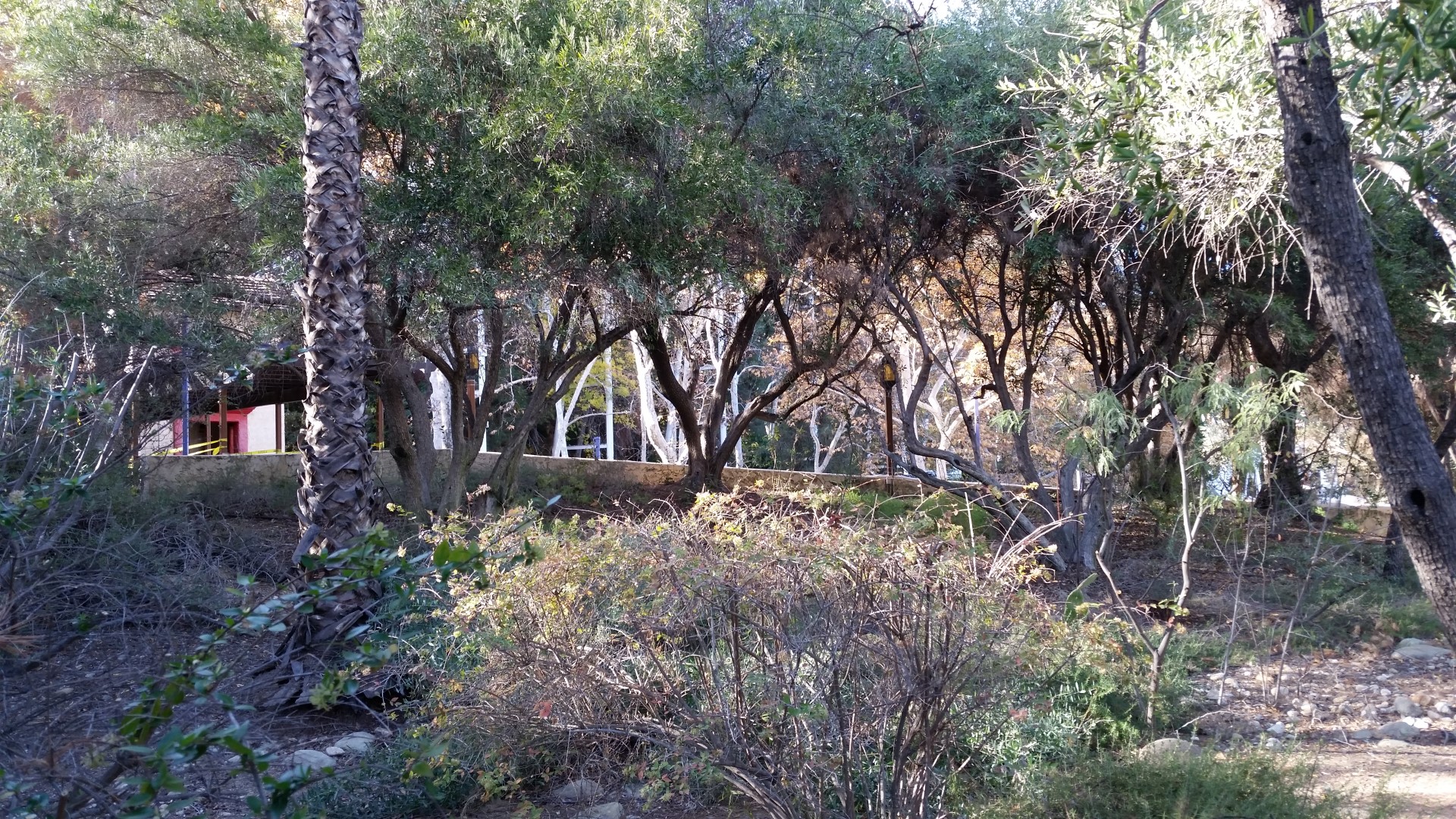 Though there are several trees around the line that have been cut. Perhaps for new signage, perhaps for a shade structure, or perhaps for the health of the trees. 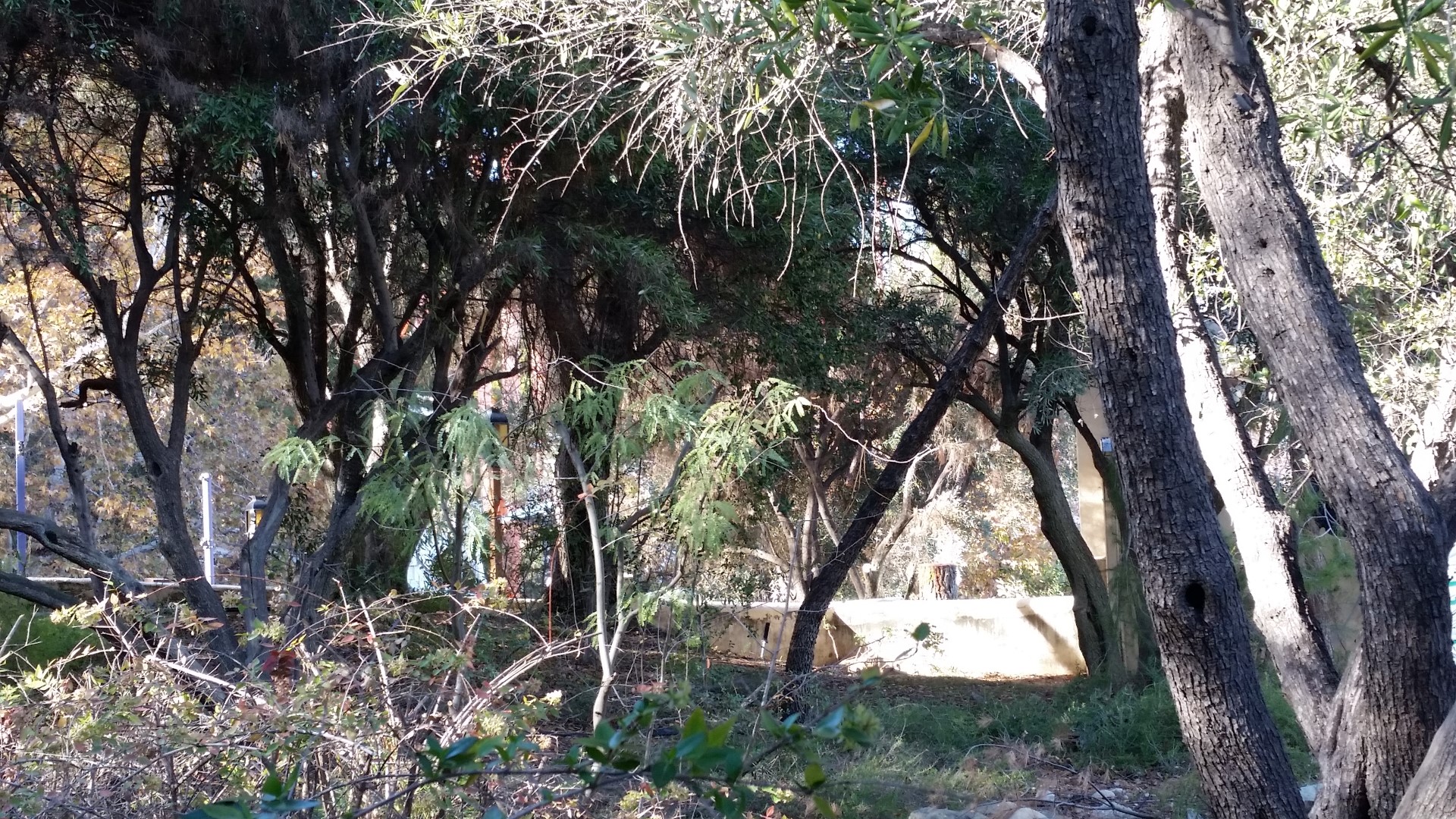 Down near the entrance to the ride, machines remain in the area clearing out vegetation and other structures. In case you haven’t read some of our other updates, a replacement wooden platform has been built around the last block before the station. 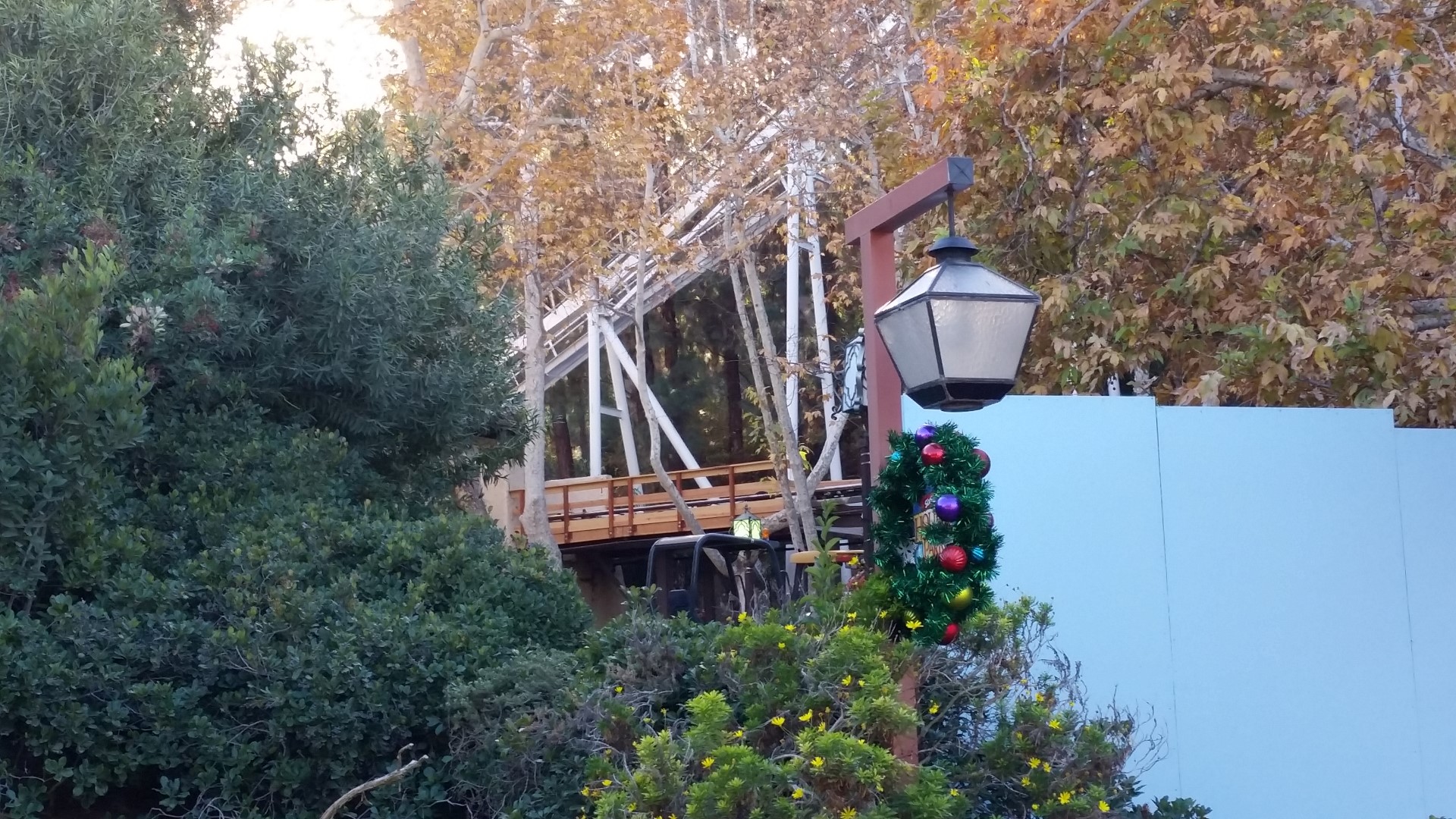 Just last week there were still 2 trains ‘parked’ on the tracks, one backward one forward, now both of those trains seem to have been taken off. Maybe we’ll finally see some more discreet changes to the ride soon. Like the repaint and reconstruction of several original features of the ride. As well as the new ‘effects’ and lights that will be installed on and around the ride. 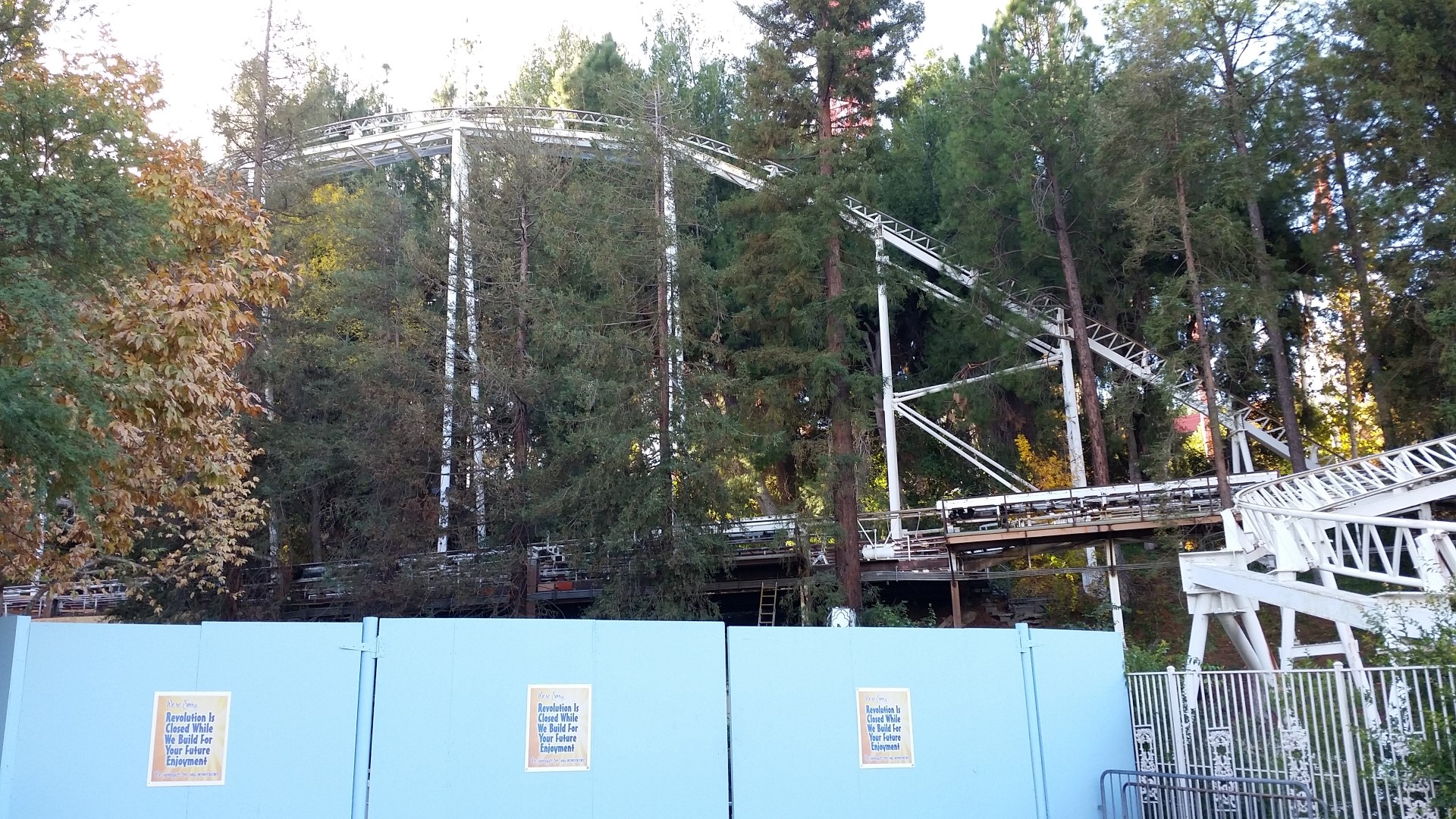 Make sure to check out the wonderful Holiday in the Park event at Six Flags Magic Mountain this year! The full report of this year’s event can be found here!

Thanks for checking out this quick Six Flags Magic Mountain and NEW REVOLUTION Update! If you’re a reader from Europe, please click here. If not, have a wonderful day and we hope to welcome you back to californiacoasterkings.com again soon!

Make sure to comment below and follow us on our social media for exclusive coverage!  Facebook–Twitter–Instagram – And share the update with your coaster-loving friends, family and acquaintances.