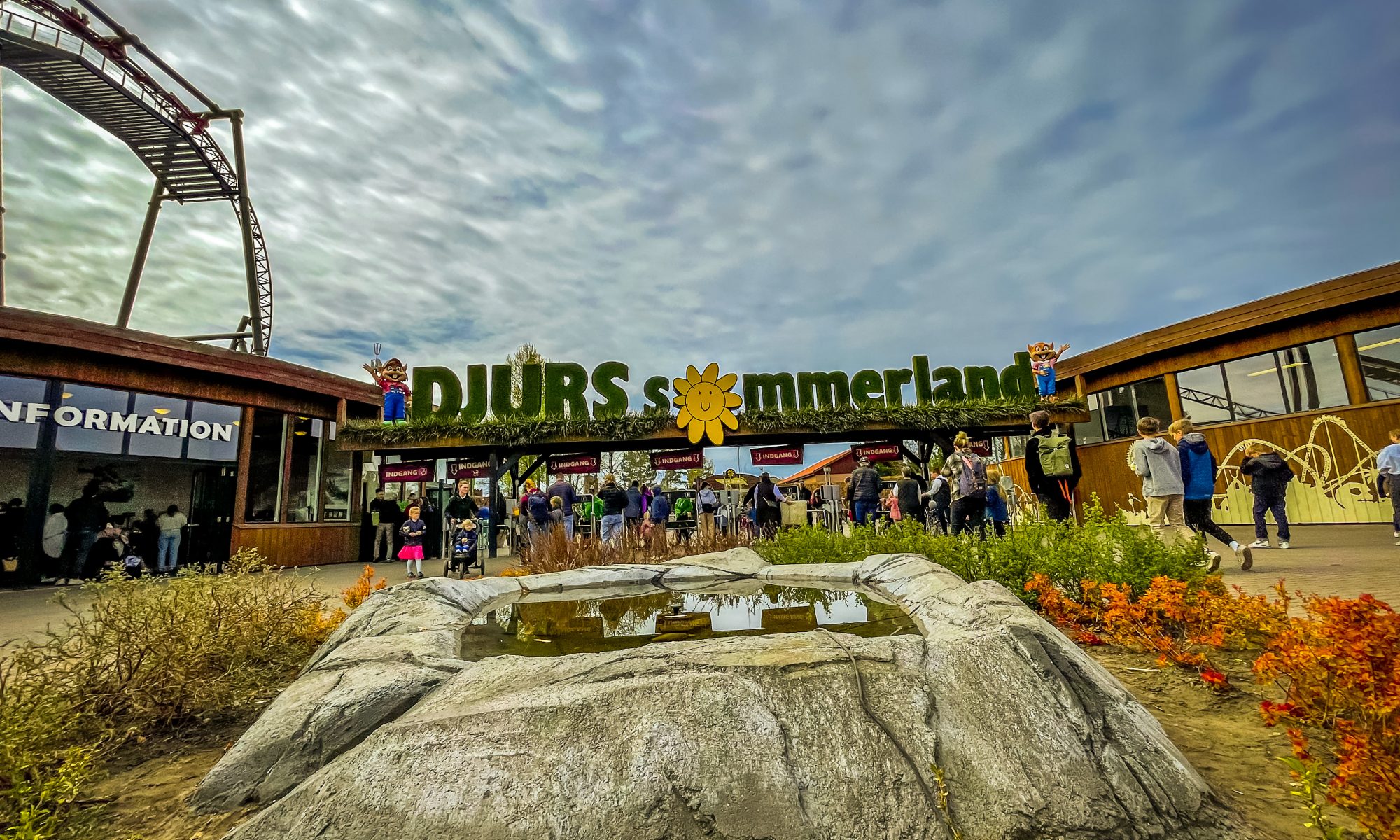 If you’ve been keeping up to date with us lately, you’ll know that we’ve been taking you on a tour of the major theme parks in Denmark and all of their latest developments. Not only has Denmark had the blessing of an epic development like a brand new Vekoma, called Fønix, just on the other coastline you can find a brand new development, called Dinosaurland, which has recently opened up its doors to the public. We checked out Dinosaurland on the opening weekend at Djurs Sommerland. We were also very lucky to have an exclusive meeting with the park’s CEO! So expect all the interesting updates in this article!

T-Rex family coaster is a Mack Powered coaster which fits Djurs Sommerland’s family atmosphere perfectly. Djurs Sommerland already have a relationship with Mack after purchasing a water coaster and wanted a classic family attraction which would provide enjoyment to all. The concept in Dinosaurland is very effective. On entry to the area, you won’t find any dinosaurs. You have to explore into the reserve on one of the attractions to discover the animatronic dinosaurs. On T-Rex, you will get two laps, with the second being at a much faster pace through the reserve. Furthermore, there’s even an on-board sound track.

The other two attractions you can find in the area include a giant playground for kids and the Dino Xpedition. The park were unsure about adding in a new play area, however it has really paid off! It is evident to see that the new playground is really successful and was really popular with younger ages!

Finally, taking a look at Dino Xpedition. Djurs Sommerland is only a seasonal park, meaning they are only open for the summer months and halloween. Therefore, they don’t have any dark rides. Dino Xpedition is their first take on a slow moving tracked ride including a dark ride part! It’s really great and worth taking a ride on to see deeper into the reserve and discover all of the animatronic dinosaurs. There’s more to be seen inside the cave too!

A look around the rest of Djurs Sommerland

Djurs Sommerland takes over 800,000 visitors into the park every year and is looking to aim up higher than that in the years to come. Djurs Sommerland is home to many different themed lands and 8 rollercoasters in total. Lets take a look around them together!

One of the most popular and well-known areas at Djurs Sommerland has to be Piratland. Piratland is home to the tallest rollercoaster in the park- Piraten. This is an intamin megalite and packs a punch with lots of airtime. The area is also home to the park’s Mack water coaster. For the first time I also tried out a tilting drop tower which is themed to a sword and tilts side to side before you drop! This area of the park also features a smaller kids log flume, a couple of other flat rides as well of plenty of theming and food options.

One of my personal favourite themed areas has to be Mexicoland. In this area you can find my favourite rollercoaster in the whole park- Juvelen! This is a family double launched motorbike coaster which is super intense and has great theming too. Additionally, you can find Solguden in this area, which is a twist on the traditional flying jumbos ride. On Solguden you need to move your car up and down and try and avoid being sprayed by the water. The theme tune is super catchy as well!

Being born and raised in the UK, I’ve always been very familiar with the Wild Asia themed area at Chessington World of Adventures. It’s nice to see another European park have a take on a similar theme but style it differently. If I was to compare the two lands against each other, Djurs Sommerland’s area would win flat out. The theming is not only more detailed, however it boasts a far superior set of attractions to the area at Chessington. One of my favourite attractions in the area has to be Tigeren. This is a gigantic Intamin Gyroswing for thrillseekers only. The surrounding area around the ride is really impressively themed and the atmosphere is very foreboding with a dramatic soundtrack too. Tigeren was new to Djurs Sommerland in 2019 and shows the quality of their investments.

It’s safe to say that I’m a fan of all the different themes and styles at Djurs Sommerland. However, Vikingland has a very different feel to the rest of the areas in the park. The theming stands out a lot more boldly and the area is encased by towering trees and a beautiful lake. There’s the opportunity to take to the seas in the pedalos or alternatively on the canoe boats. Of course, there’s the rides too!

Westernland is home to various family rides, including a swinging ship. It’s also home to the park’s Gerstlauer Bobsled rollercoaster called Thor’s Hammer. Although this bobsled coaster utilises a pretty standard layout, the theming and landscaping through the trees makes for a really exciting ride! At the end you spiral down over the water which is extremely thrilling.

As you can see, we treated ourselves to a waffle in the viking themed area which was absolutely mouth-watering. There’s a lovely balcony area overlooking the coaster and the water which is just perfect to sit on in nice weather. Absolutely glorious!

Westernland is one of the park’s most charming areas and is full of character. In Westernland, you can find many places to eat as well as loads of different shops including gifts and homeware. There’s also a dodgems attraction, wave-swinger and a river rapids- which has great theming! Westernland is also home to playground areas for the younger ones and a train station. If you choose to ride the train, it will take you around the entire park!

Djurs Sommerland is home to many different food options across the park. This includes sit down buffet style restaurants and lots of take away snack stalls. We tried out the Western Buffet, which was absolutely delicious! They also have unlimited spare ribs and burgers for those who love to eat meat. Furthermore, we tried out a delicious crepe with nutella and soft whip- absolutely delicious for those with a sweet tooth!

A stay in the Djursland region

A trip to Djurs Sommerland is great for coaster and theme park enthusiasts. However, as the park is in a remote location and there’s no onsite accommodation, it can be tricky to plan your trip. By using Visitbox you can book your Djurs Sommerland tickets and accommodation in one places. There’s lots of places to stay in the area including apartments through to camping sites!

If you’d like to see more of our content and updates from Djurs Sommerland- including an onride POV of T-Rex coaster, then head to our social media channels! Here you can find loads of content which we’ve made in Djurs Sommerland as well as loads of other theme park and coaster content!