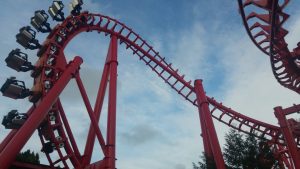 Remember Raphael? Our Brazilian friend that gave us amazing first-timer opinions of almost all Californian theme-parks?! He came back to the US and is sharing his adventures with us again, of course comparing it to the Golden State of California! Join Raphael as he takes us all to Kentucky Kingdom in this report!

Kentucky Kingdom and Holiday World always were the fragile points of the trip. The Louisville park were one because of Kentucky State Fair. I thought that because of the Fair, the park would be so packed that there was a chance I could not get on the attractions. Luckily, the opposite happened: the park was so calm that I easily could confuse it with a park that is on its last days or closed. Hurricane Bay was closed, but I did not want to ride slides anyways. 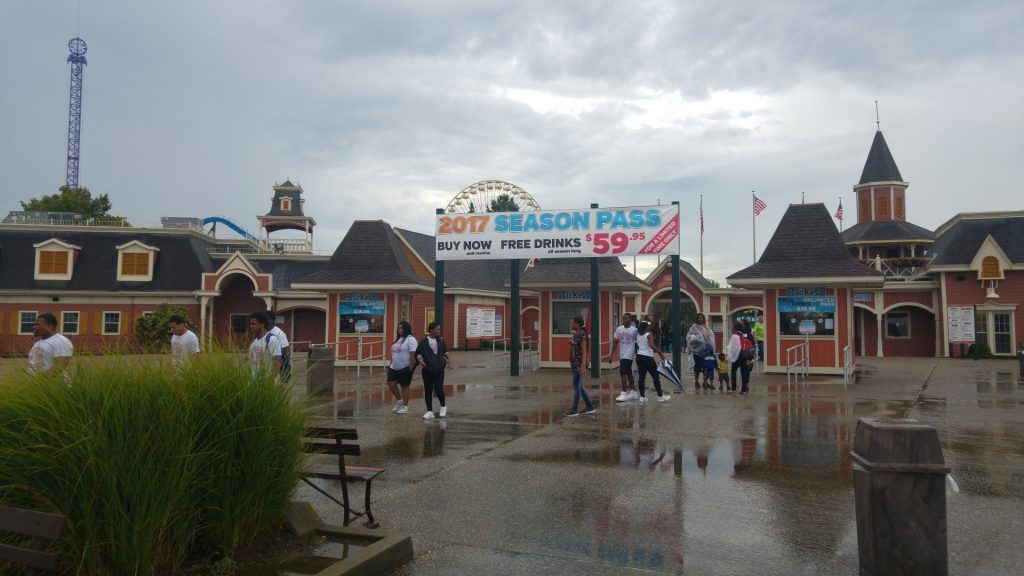 On the other hand, I couldn’t go to Holiday World because of the transportation limitations to reach the city of Santa Claus. I chose to come back and visit the park sometime in the future, when I finally will be able to drive.

The Fair was amazing. It was my first time at a State Fair, and I loved the atmosphere, especially with the artists, performers, competitions and… FOOD! What a marvelous world of chicken! I will never forget my donut burger! The rides were amazing too – They had some kind of Rainbow (my favorite flat ride) that I couldn’t get off. The other ones were better known rides, but I rode all of them anyway. How can I refuse a ride on an Xtreme and a Power Surge? 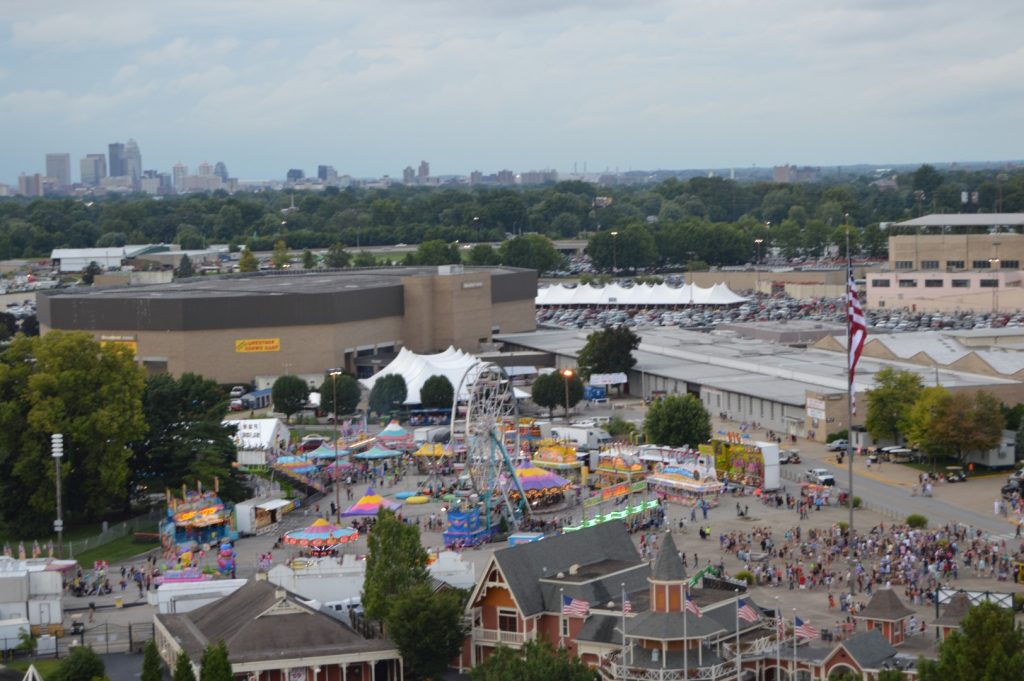 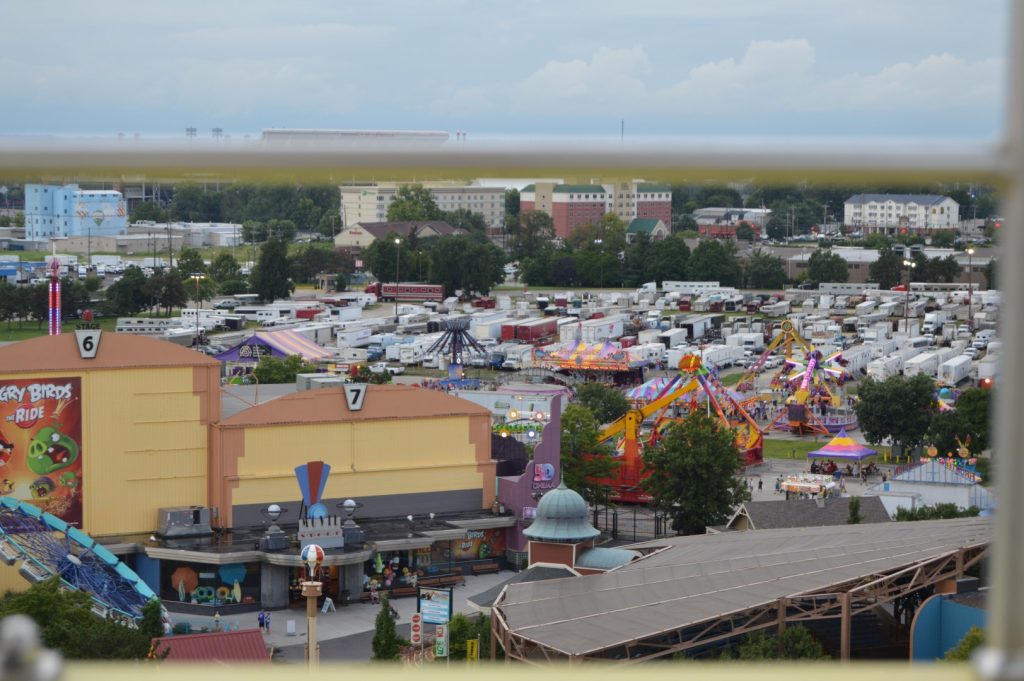 Kentucky Kingdom was empty as I mentioned, so I ran to Lightning Run as soon as possible. I saw many comments about its airtime, and I can’t say that I am disappointed, but I expected more. 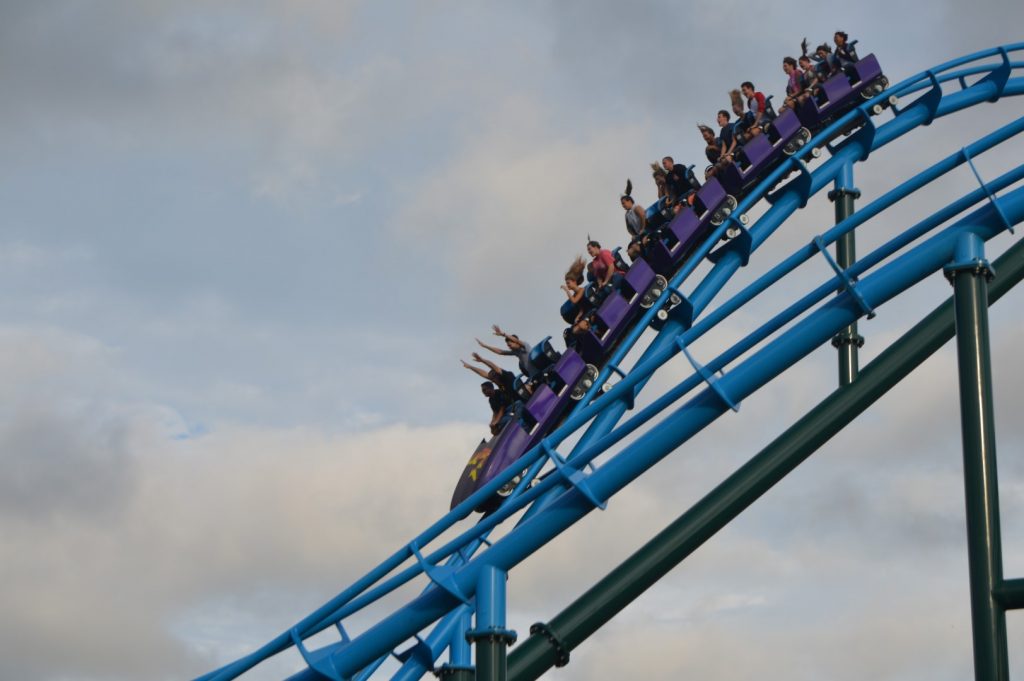 The coaster is indeed a lot of fun, but Storm Chaser gained my heart. I can’t remember a time that I rode a coaster so many times like Chaser. It was my second favorite coaster of the entire trip, just after Maverick. The airtime is breathtaking as well the inversions. I thought I was going to fly out, many times! 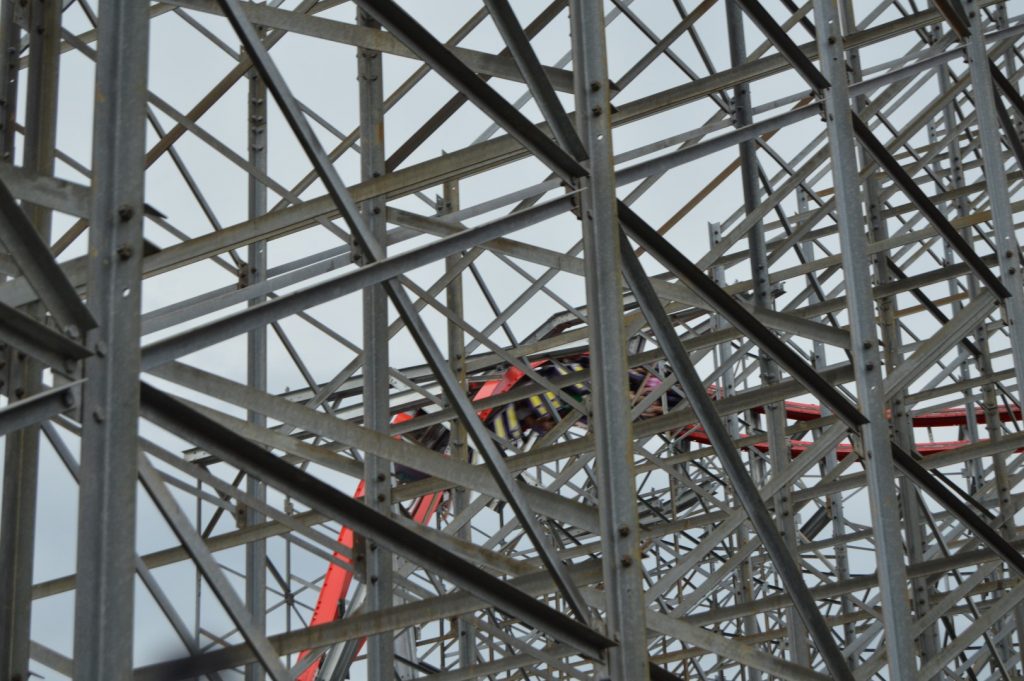 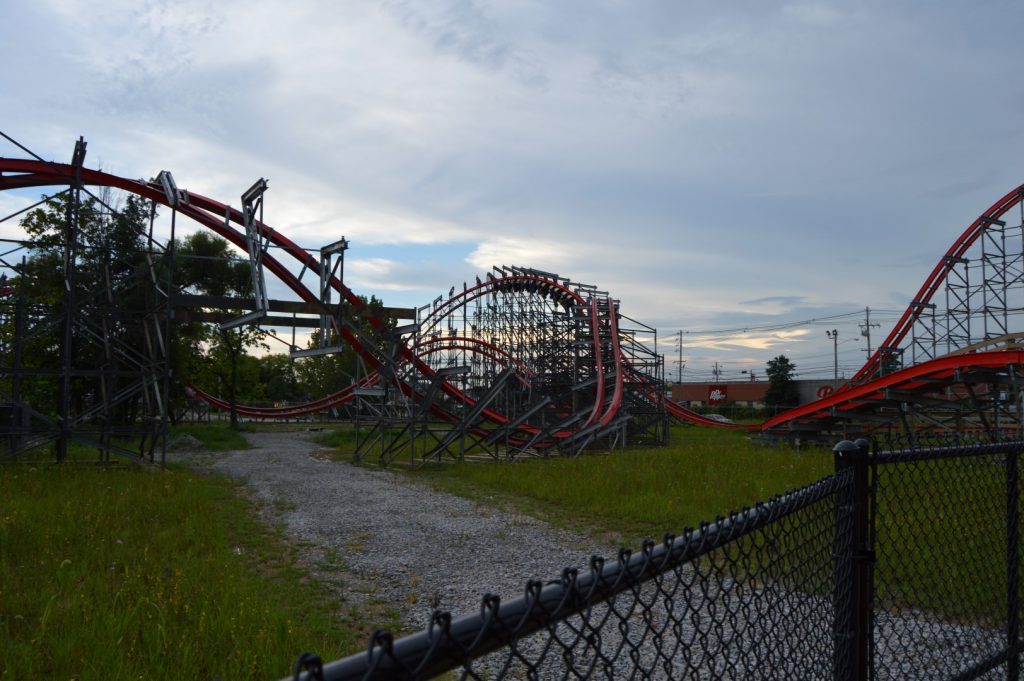 It felt amazing to walk through a revived park. What happened to Kentucky Kingdom should happen with many parks in the world. If all powerful businessman knew how amazing an amusement park is for a city, and how profitable it could be, what happened with the old Kentucky Kingdom, Geauga Lake and Six Flags Astroworld shouldn’t happen again. 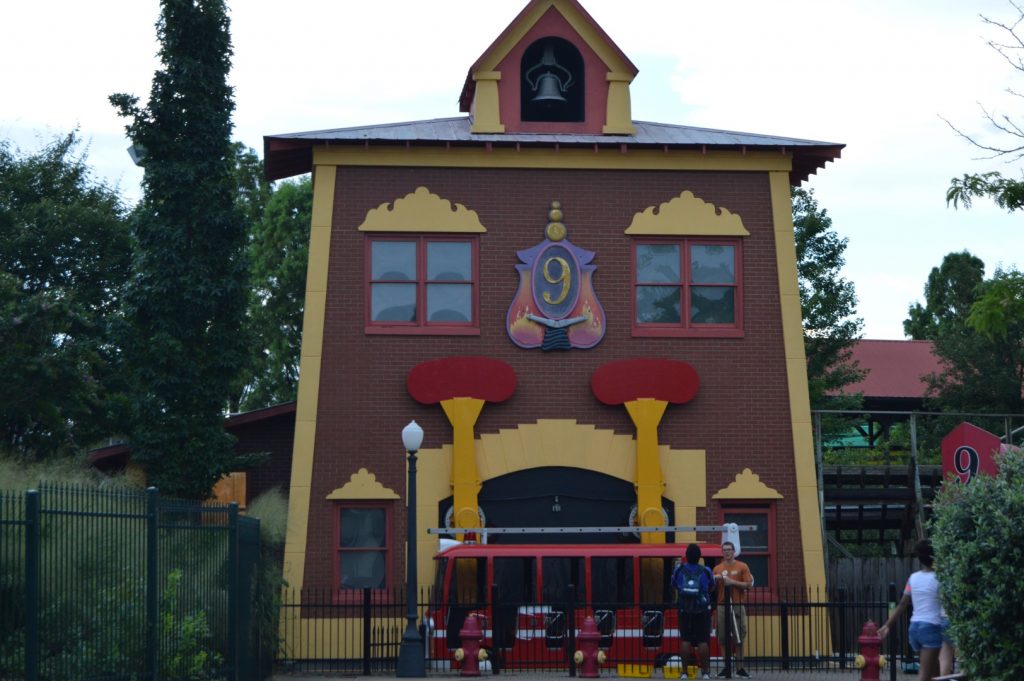 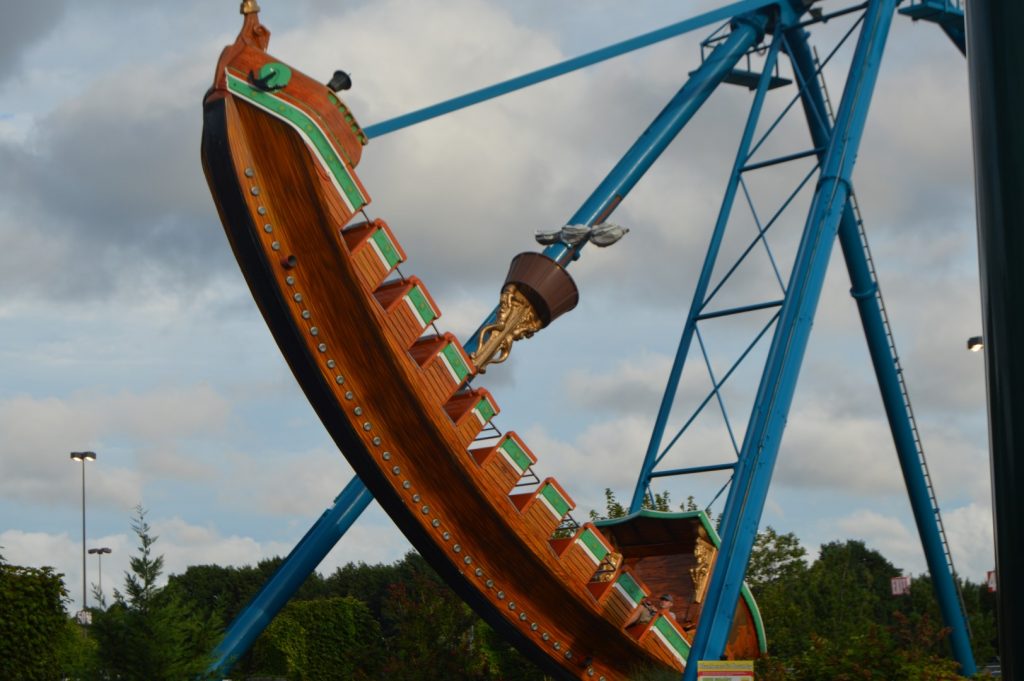 It was very nice to ride a revamped T3, even thought it still hurts like all the SLCs. The Kumbak trains are nicer than the old ones, but I think that the age of T3 does not help much. 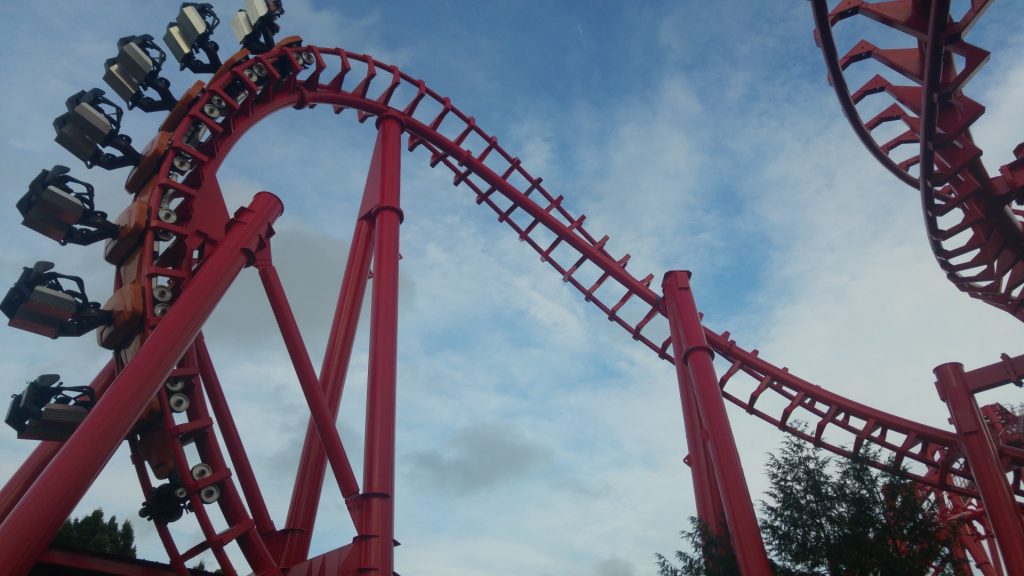 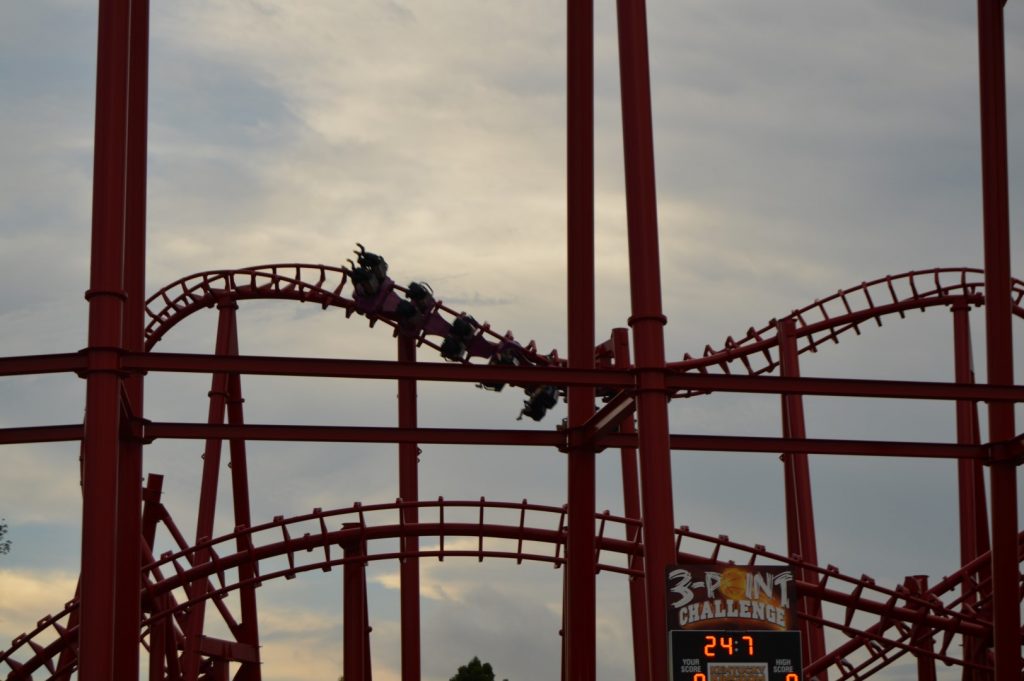 Riding Thunder Run was considerably better than the others wooden coasters of the trip, but I happy to see that it will have a rehab this year. This coaster deserves it. When I saw the wave of Mile High Falls, I wish I could go on it, but I couldn’t get soaked. The Uber driver would kill me. 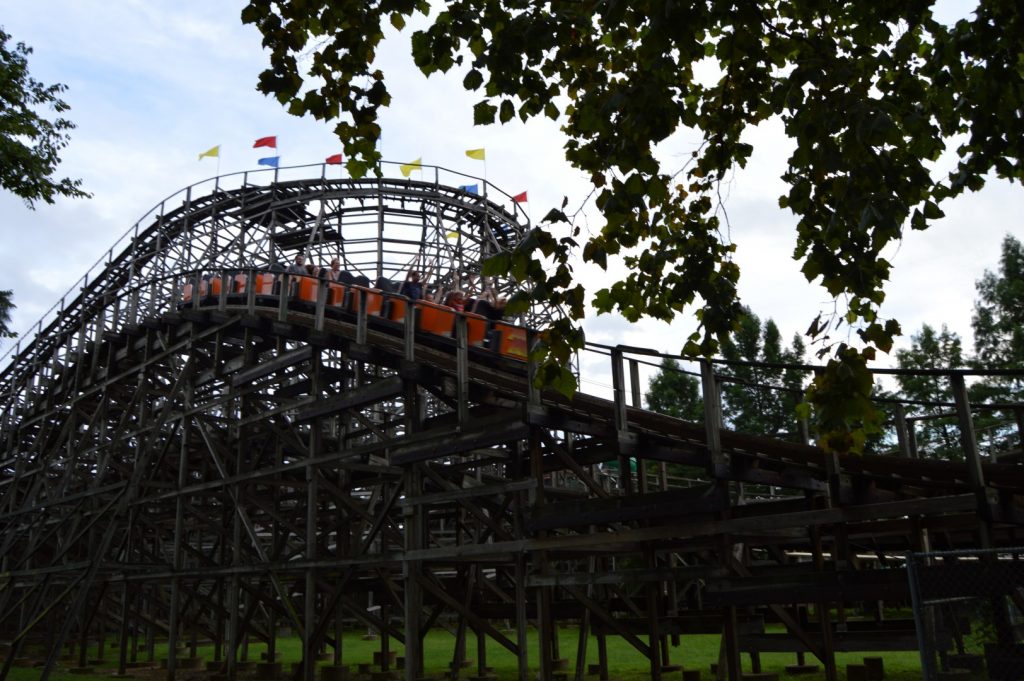 The other flat rides of Kentucky Kingdom were all amazing especially Cyclos. IT WAS SOOOOOO INTENSE! I felt my brain surfing inside my head! From the top of The Giant Wheel I could see all Louisville greatness and the incredibly fun Fair. Before the moment I left the park, I rode the “nothing-special” 3D Cinema and Professor Jonh’s Flying Machines, which is a funny ride, even for grown-ups like me! 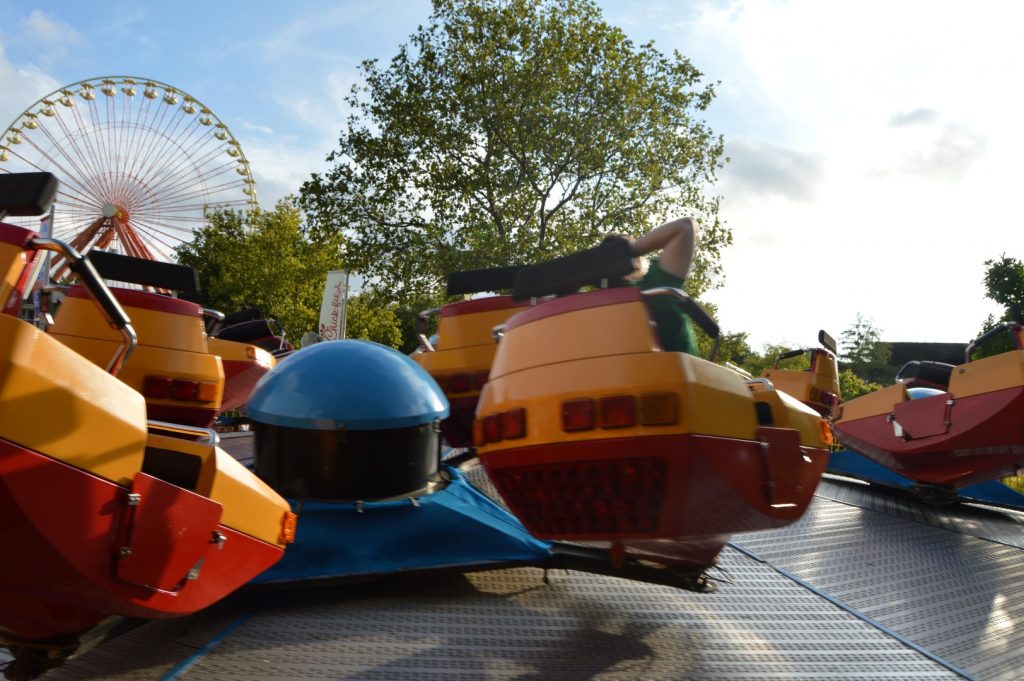 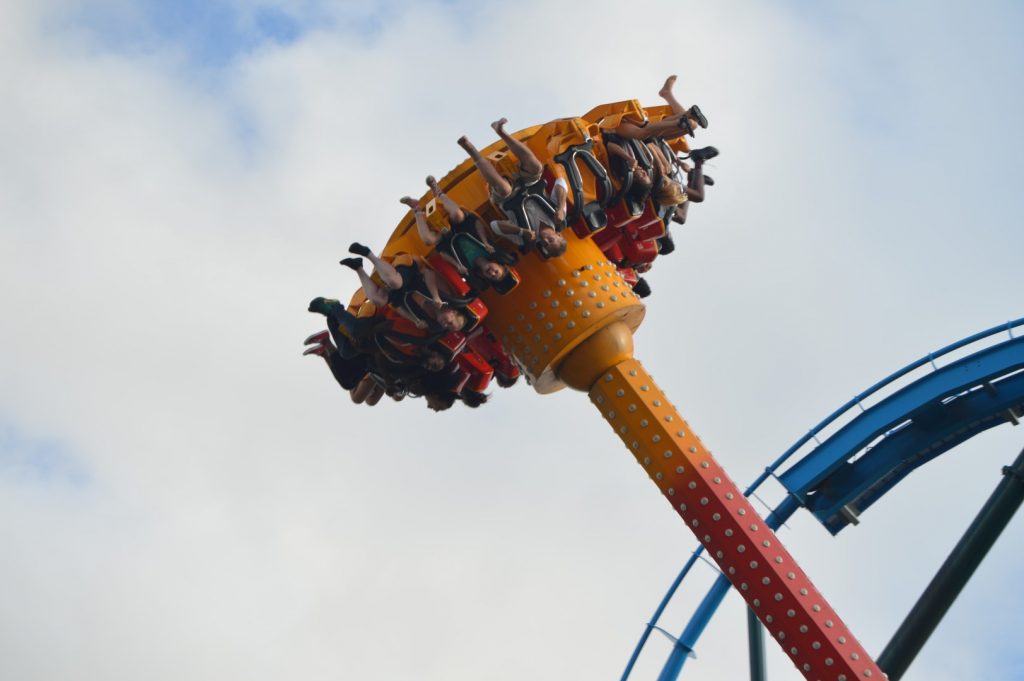 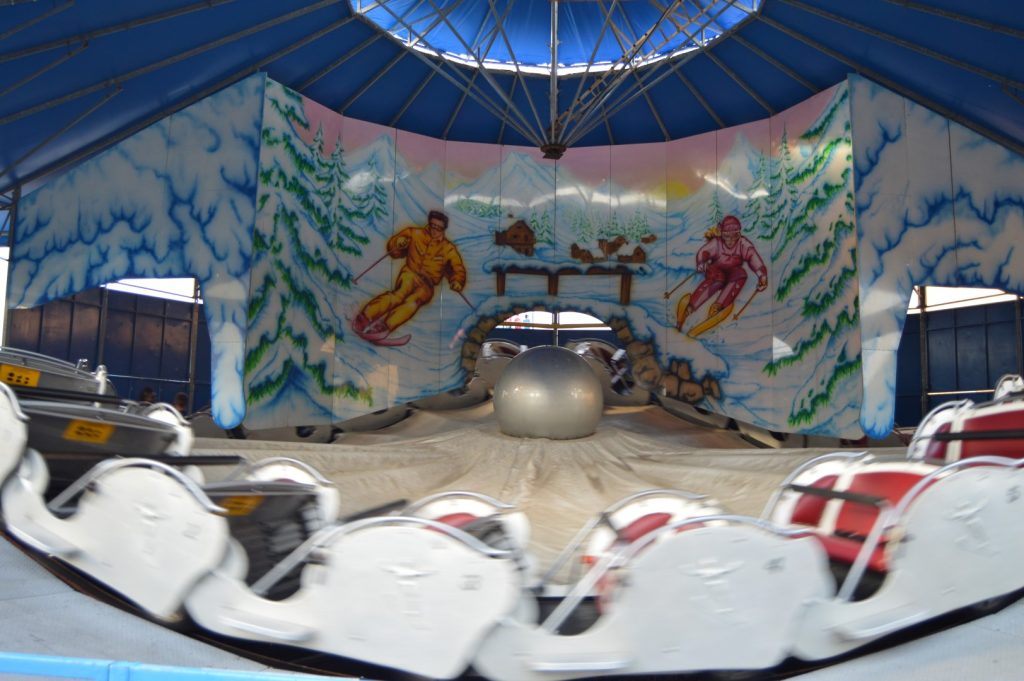 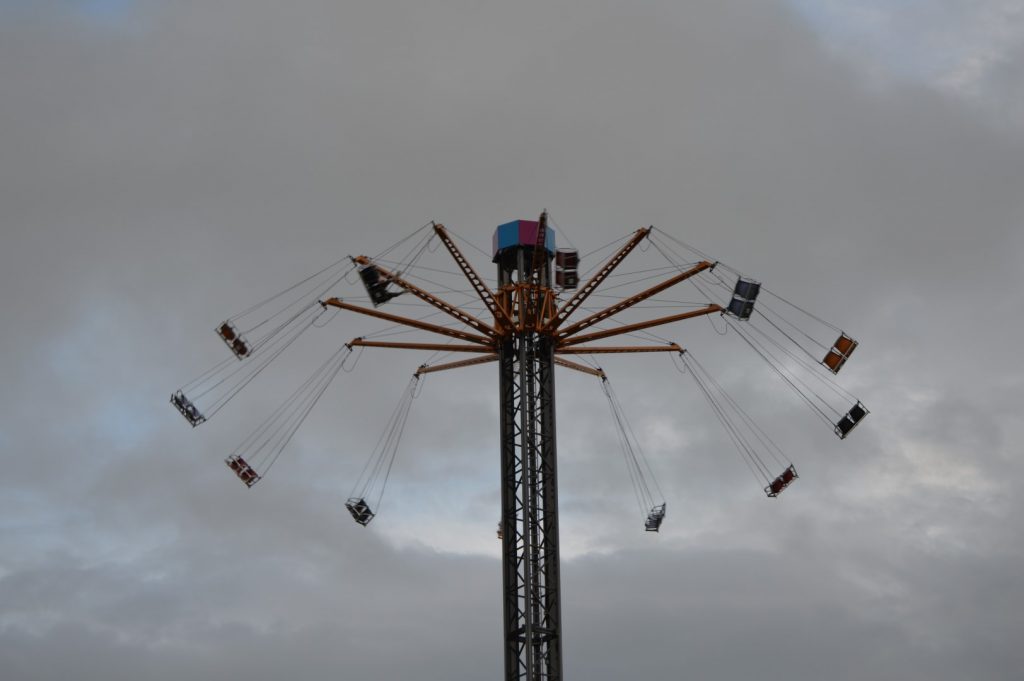 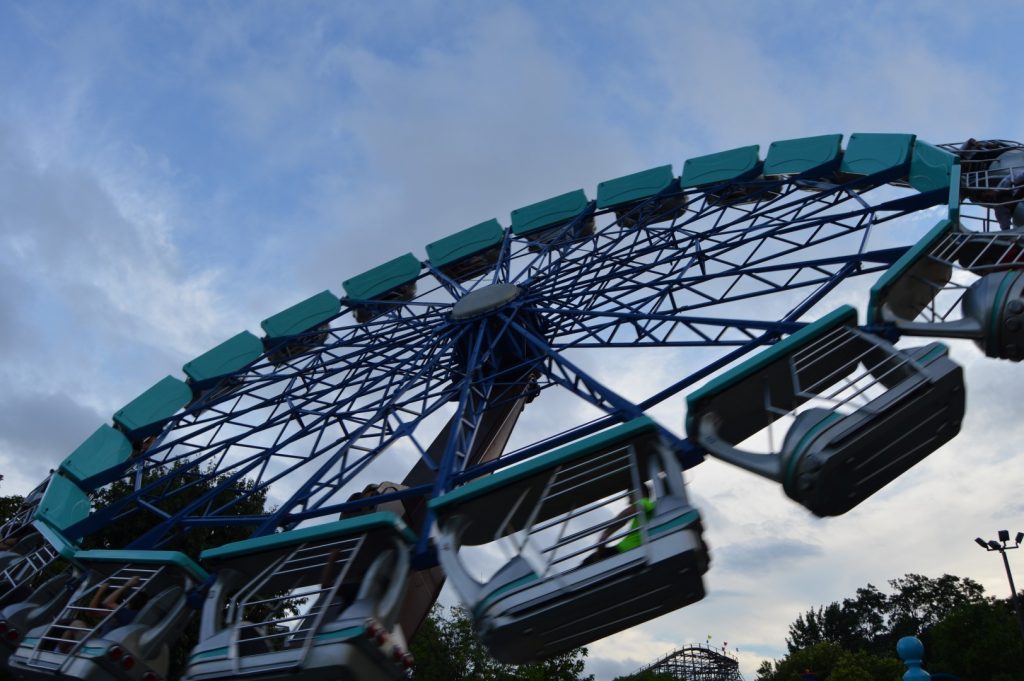 Kentucky Kingdom was very clean and well-maintained, but I think that some parts of the park are simply dead. For the foreseeable future, they need to expand their catalogue of flat rides and put them in the empty places that are all over the park, especially in the area between Mile High Falls and T3. 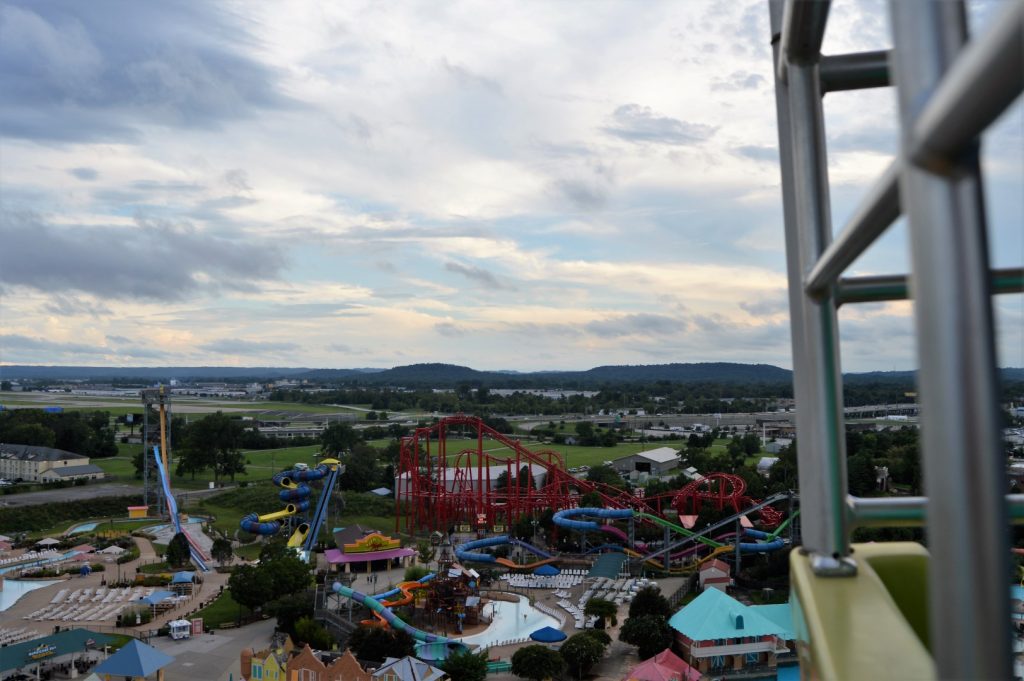 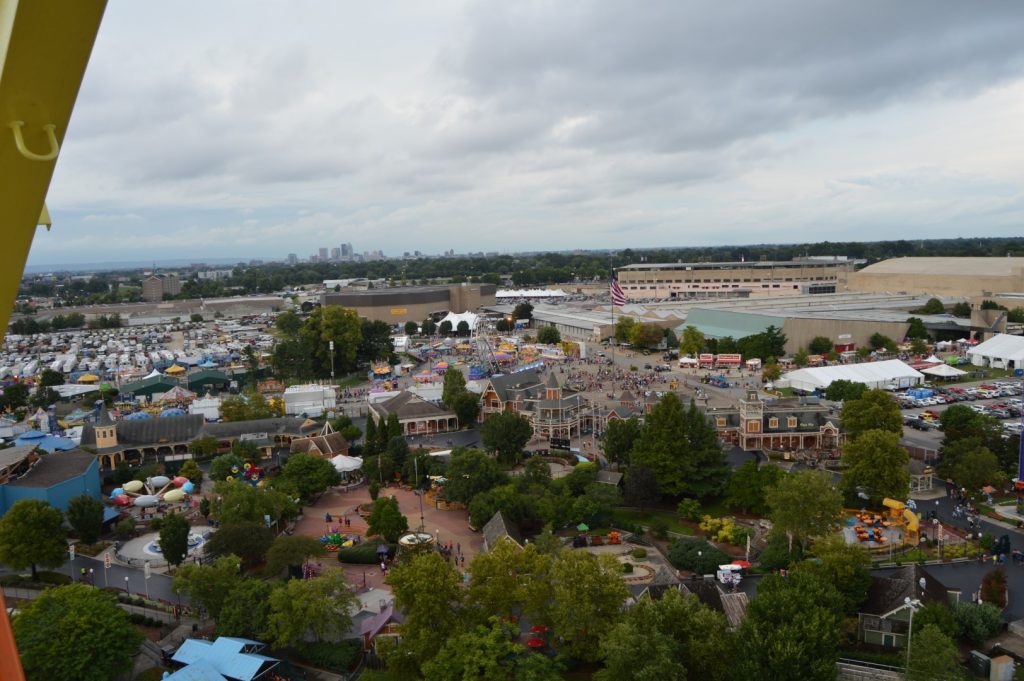 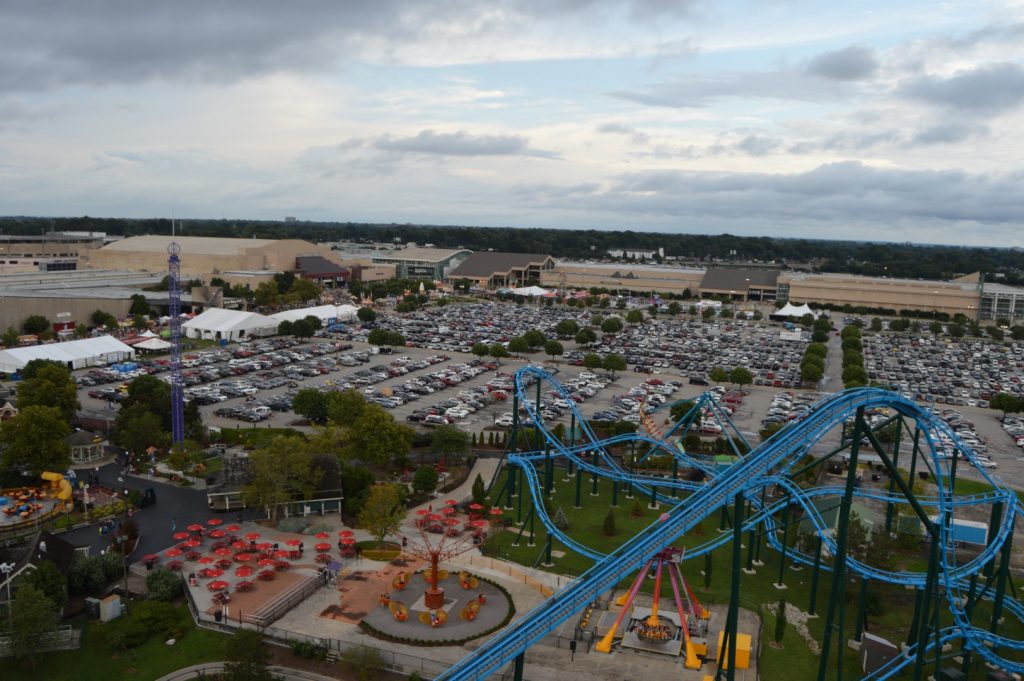 I learned a lot in this trip. I think trips like this for a Brazilian guy that doesn’t drive like me is very difficult but it was all worth it. I have experienced Greyhound bus trips, a delayed flight in a gigantic airport, arriving in Cincinnati by midnight, the ghost neighborhoods of Detroit… Besides all the coasters and rides, of course. I regret nothing. I recommend all of you do this just one time in your life. Try yourself. You will be surprised with the things that you will discover. 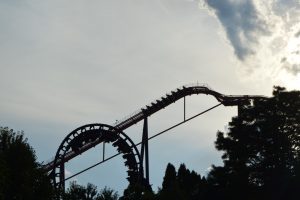 Thank you for following along with Raphael’s adventures, stay tuned for his Kings Island adventures! His Cedar Point report can be found here! And his Six Flags Great America report here! If you haven’t read about his amazing travels around California last year, or would love to read his first-timer outsider point of view again check out any of his Californian articles: