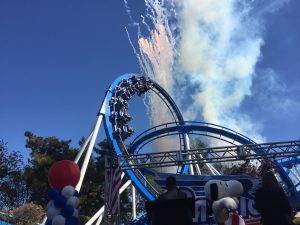 Byron: California’s Great America was nice enough to invite us to the media day for their new ride experience for 2017; Patriot! After a 25 year run as one of the first B&M stand up coasters, Vortex closed last year to receive new floorless trains and be converted to Patriot. Below I’ll go over what the media day and opening ceremony consisted of, as well as my thoughts on this new ride experience.

After arriving, we were ushered through the park back towards Patriot. We filled in the small area between the Park Operations building and Patriot, in which they had built a stage for the occasion.

The park brought in multiple branches of the military to help open the ride: The Army, Navy, Air Force, Marines, Coast Guard, and National Guard. I personally thought this was a very cool touch to pay respect to those serving considering the ride is named Patriot. One member of the military was invited up to the sing the National Anthem, and did so beautifully. 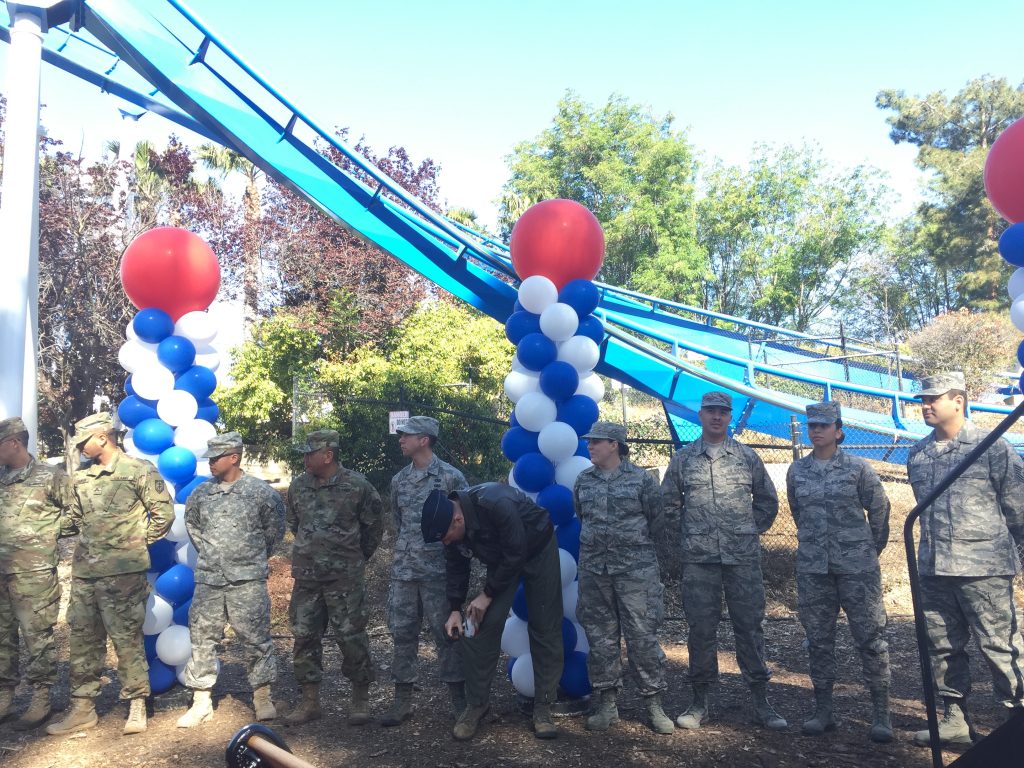 The men and women of the Military then left to go board the train and get ready for Patriots first ride. At this point the mayor of the Santa Clara, Lisa Gilmor, was invited up to speak. Her speech included talk of the recently approved ten year plan, about which she said:

“Patriot is the first of many great things that are coming from California’s Great America. At our January 24th 2017 City Council meeting, the Santa Clara City Council voted to approve the rezoning of the land at Great America. We are very exciting to say that Great America will be able to move forward with their new ten year plan which includes longer operating hours, taller rides, and an entertainment district” 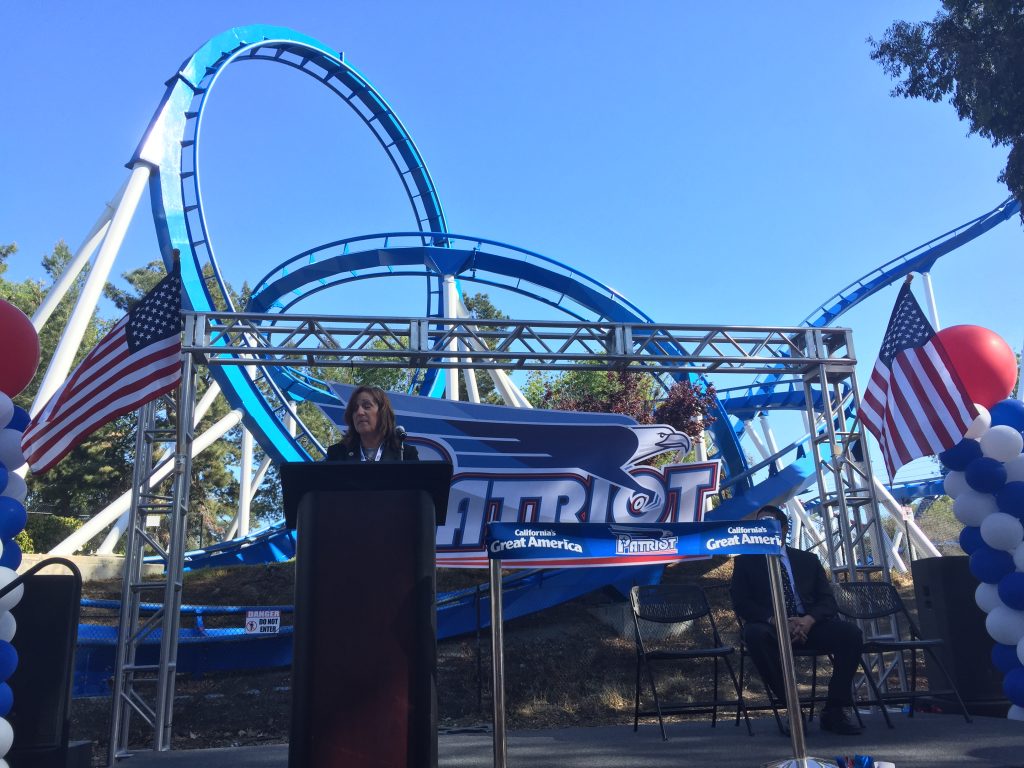 General Manager Raul Remborg then came up and gave a short speech expressing his excitement for the new ride experience Patriot is able to provide. 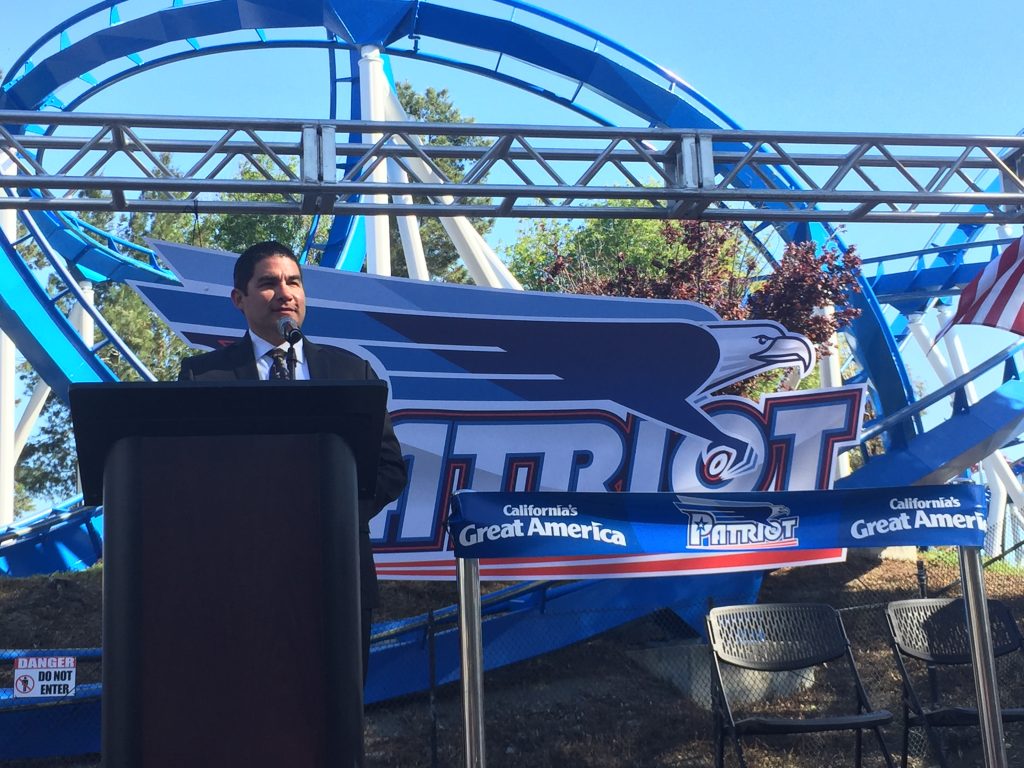 Roger Ross, Raul Remborg, and Lisa Gilmor then all took the stage to cut the ribbon for the first run of Patriot. 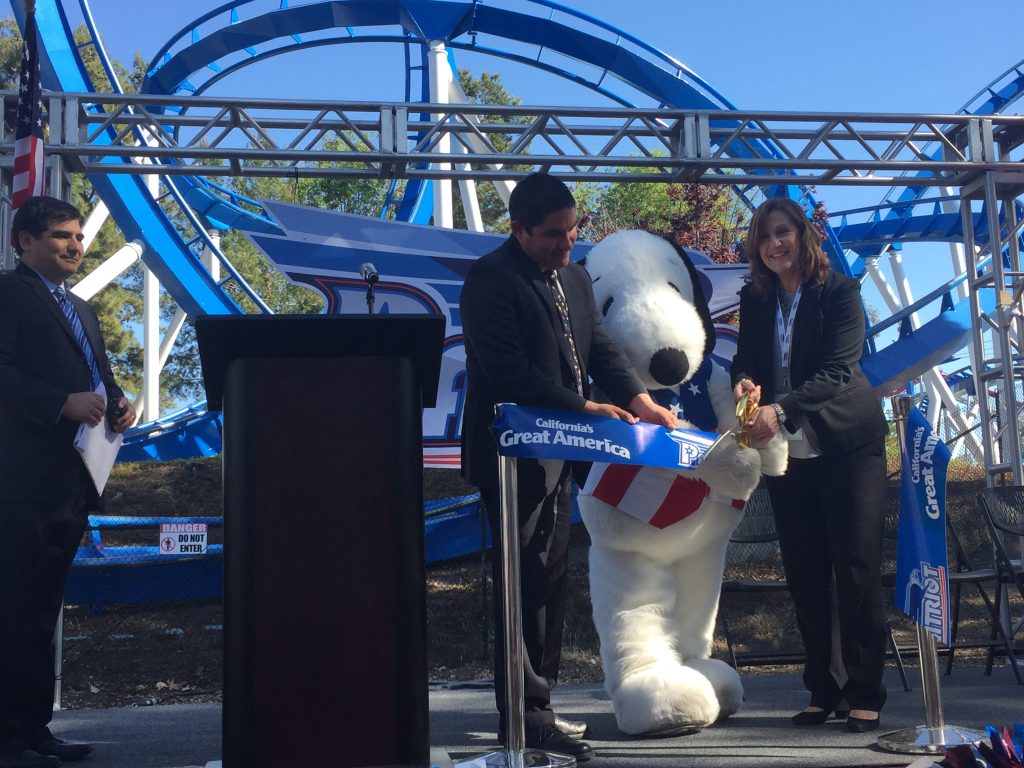 The ride dispatched and cycled through for the first time with members of our military getting the honor of the first ride. Of course the obligatory fireworks were set off for the rides first run. 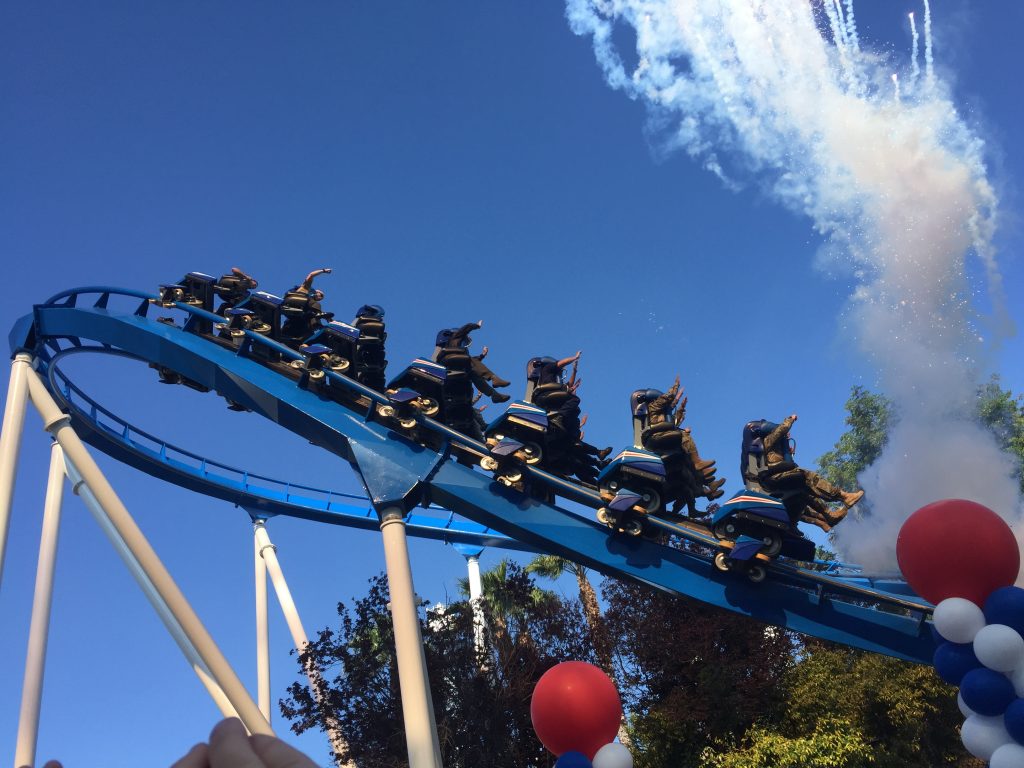 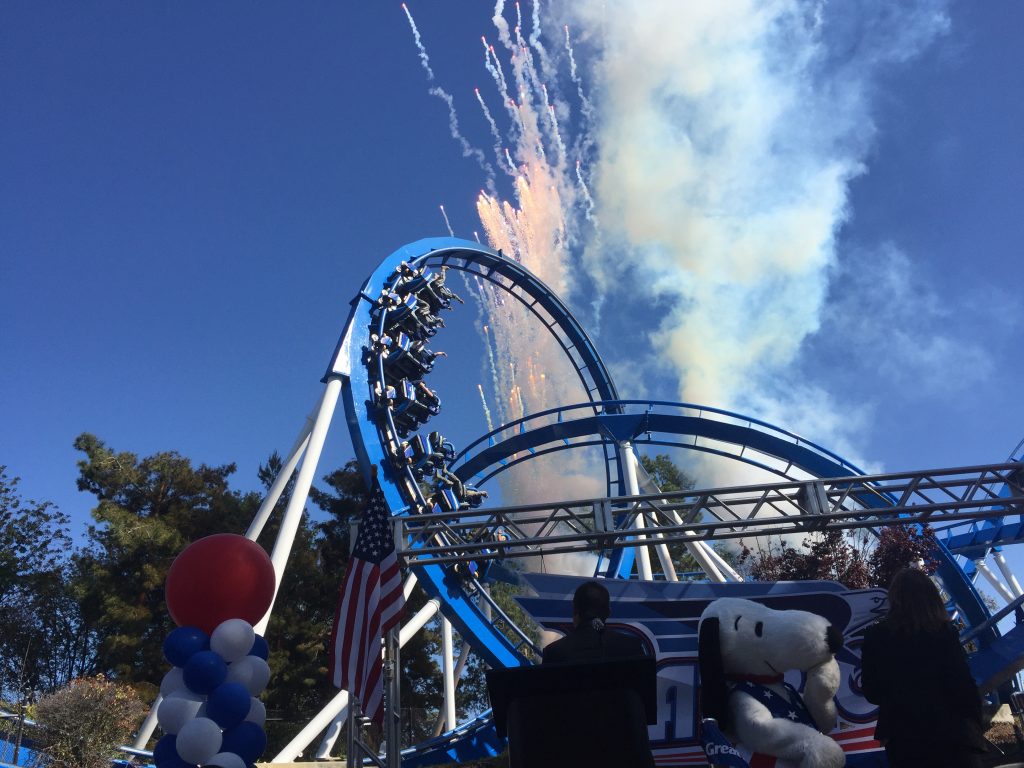 We were then invited to ride as well as treated to some of the new food offerings at the park, as well as some Patriot themed and flavored Dip n’ Dots. 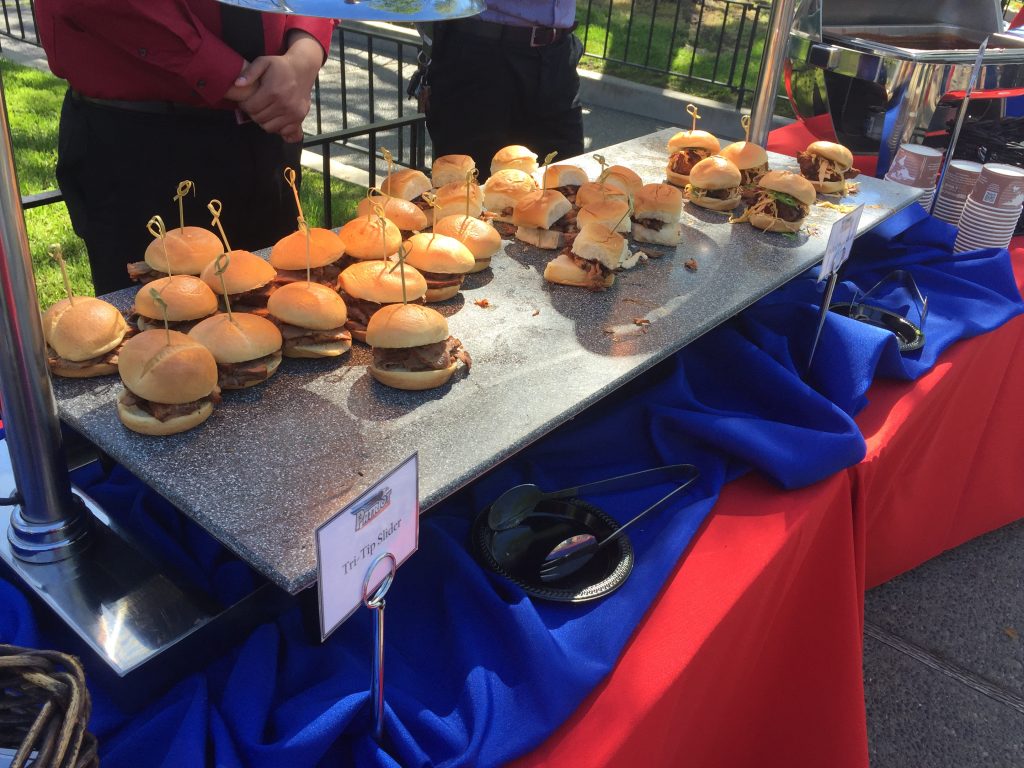 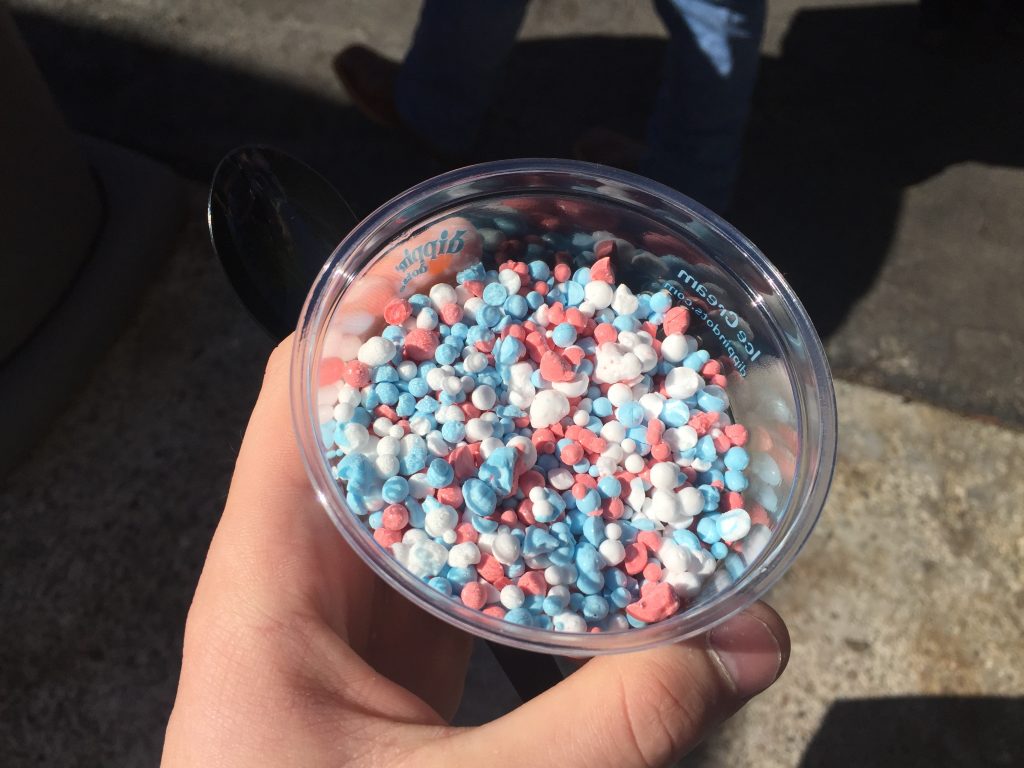 The new sign looks very nice, and a new double belted test seat has been placed at the entrance. 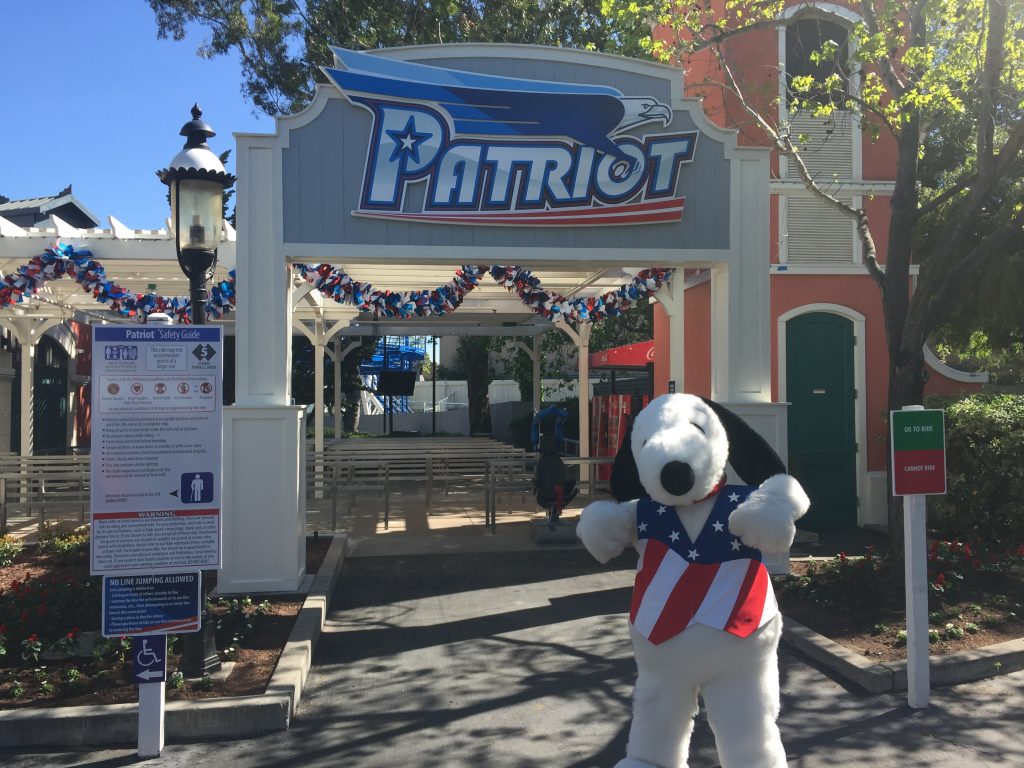 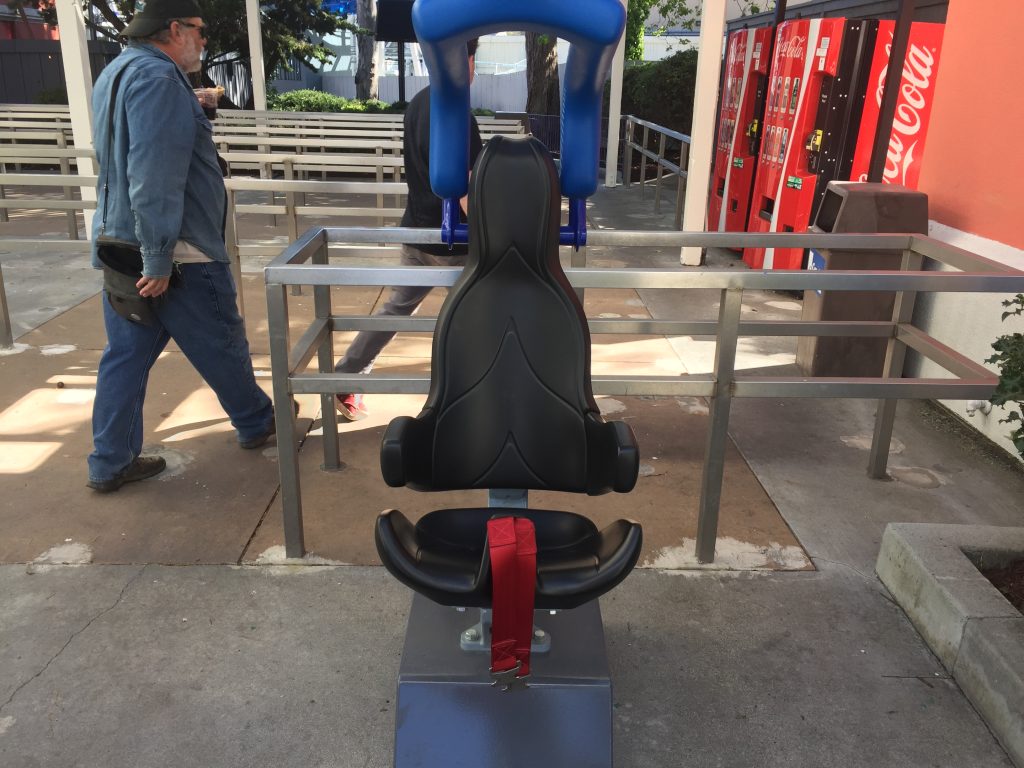 The queue has maintained the same layout of switchbacks, stairs, then station. 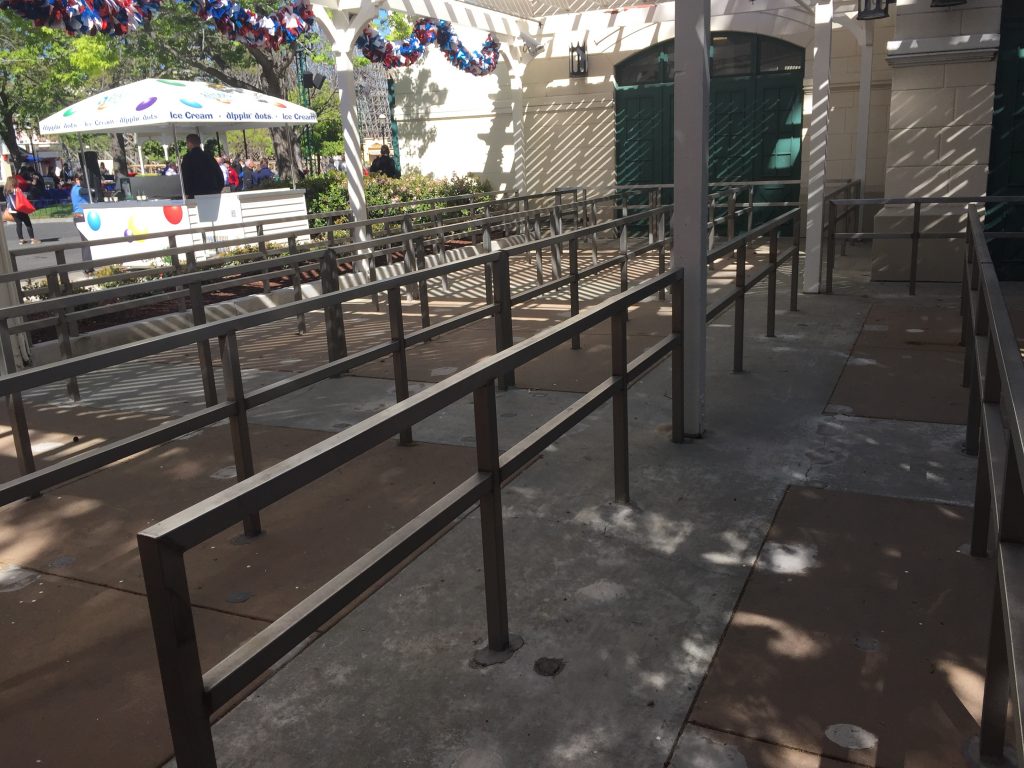 Fortunately, the station now has some blue awnings to provide some shade, something we were ecstatic to see. 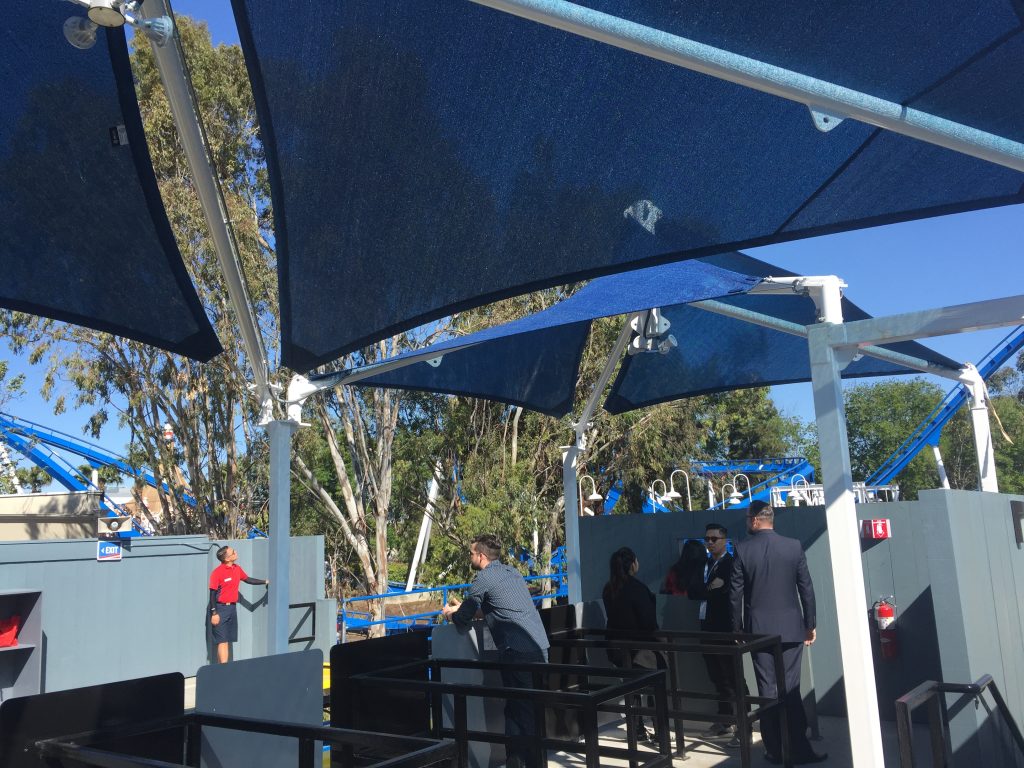 You can get a look at the sleek new floorless trains courtesy of B&M here. They look quite sharp and blend in nicely against the freshly painted track. 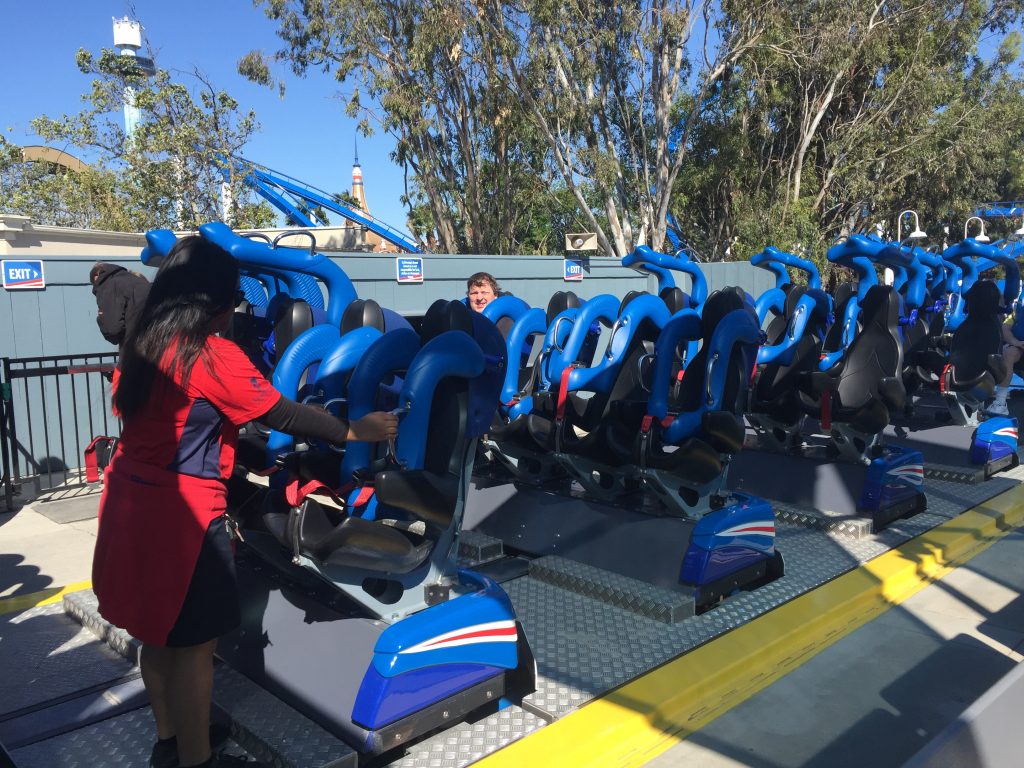 The ride itself is a lot of fun and a big improvement for a few reasons. Firstly, it’s much smoother.  In addition to the fact that the pressure has been taken off your legs now that you’re in a sitting position, the new trains hug the track very nicely and reduce the rattling significantly. Although each rider has their own experience, I personally banged my head maybe twice throughout the course of multiple rides. 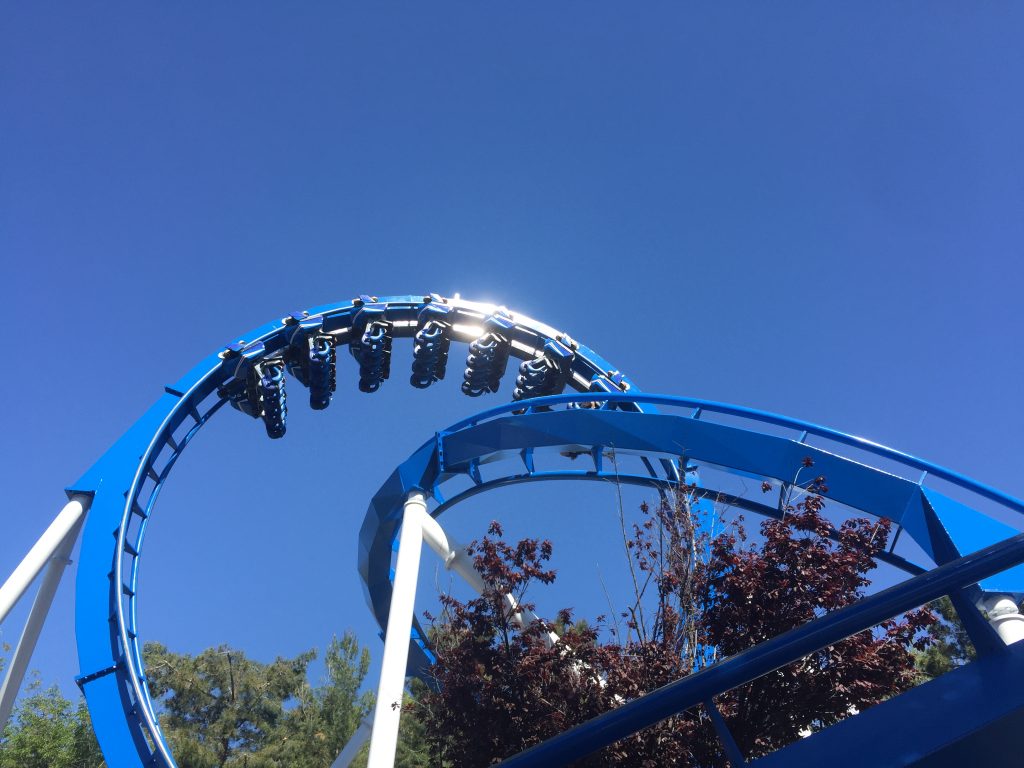 The floorless component is most fun in the front row as you can see the track in front of you, but I happen to think that as with all floorless coasters, it’s a bit of a non factor otherwise. 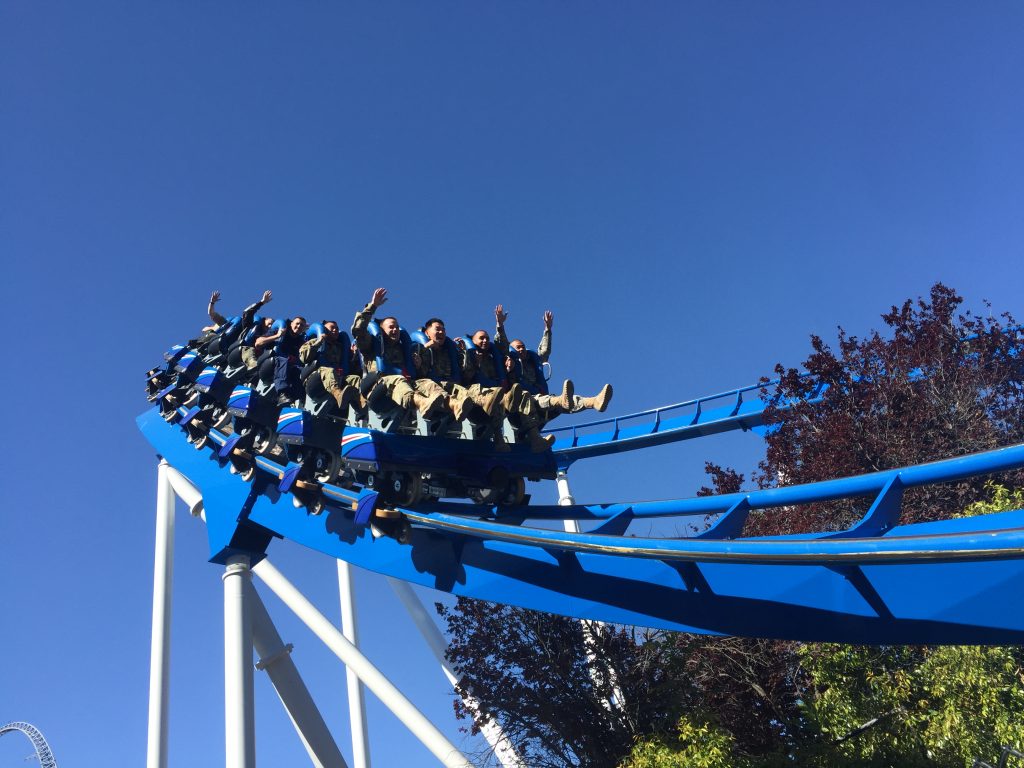 In addition, the ride’s transitions seem much smoother as a result of this reduction in rattling. Although the actual track is exactly the same, the trains have riders sitting slightly higher than your average floorless coaster to compensate for banking designed to rotate around the axis of a riders heart on a stand up ride. The result is some interesting and unique lateral forces through some of the lateral filled turns, specifically the section between the two inversions. 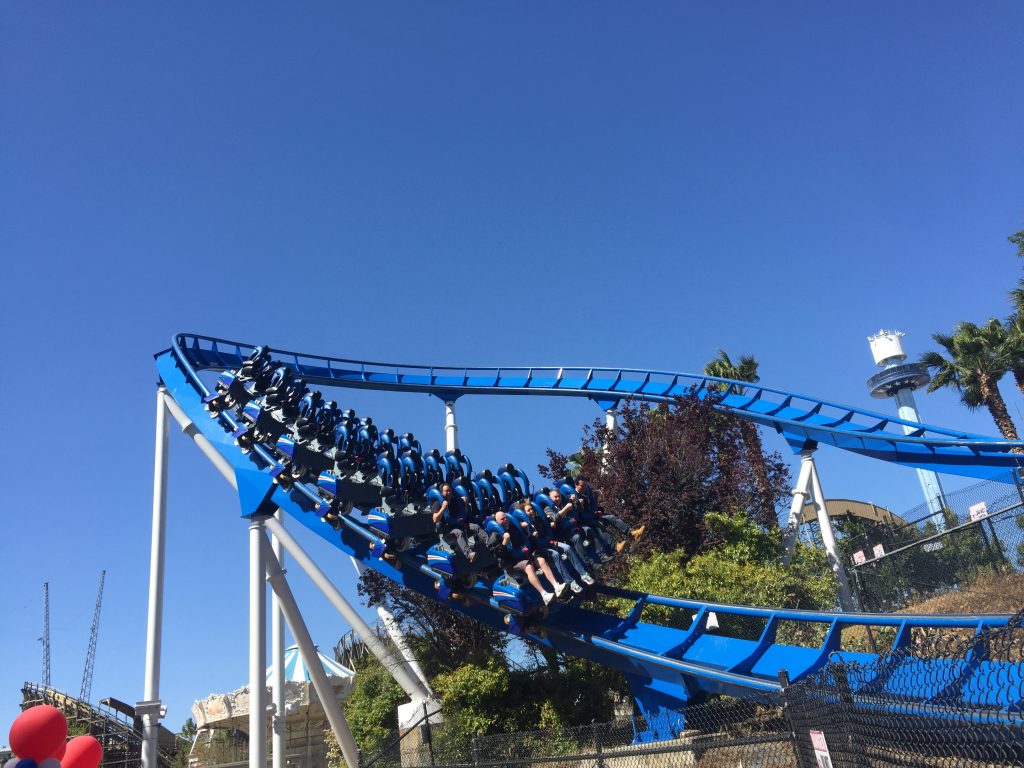 Speaking of the inversions, the new trains do both inversions wonders. The first loop is just a tad shaky, but is much more fun now that your legs dangle freely instead of being crushed into the floor of the train from the positive force. 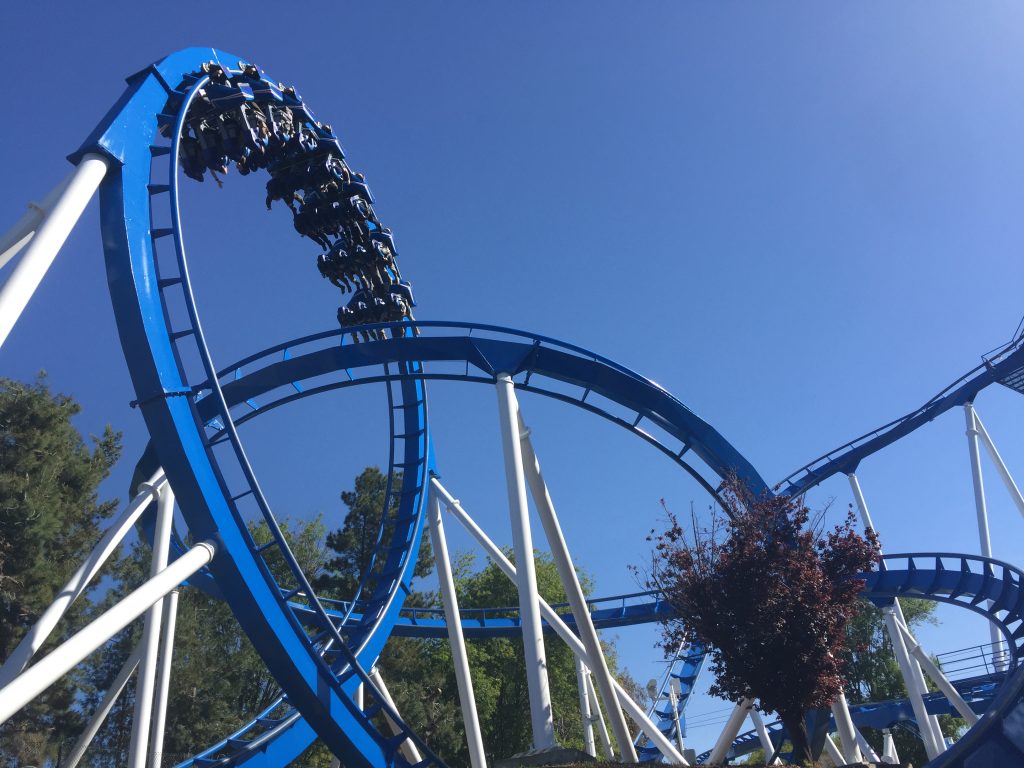 The corkscrew starts very floaty, and ends very snappily, setting riders up with a mild whimsical moment before whipping them through the end. 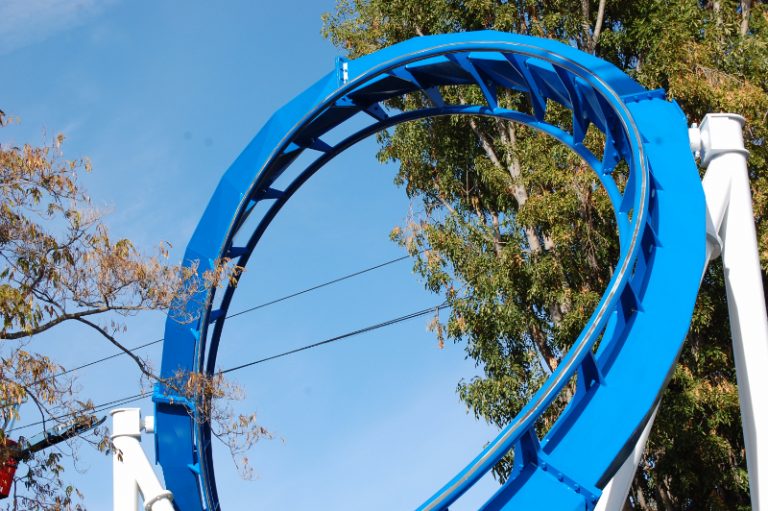 As far as issues with the ride, it is still a rather short ride, and it is still the same layout. The one interesting thing that i noticed is that although the ride can feature some very interesting forces at times due to its initial design as a stand up coaster, it can be a little forceless at others. The ride is not relying on intensity, but rather providing a much more comfortable and fun ride experience. 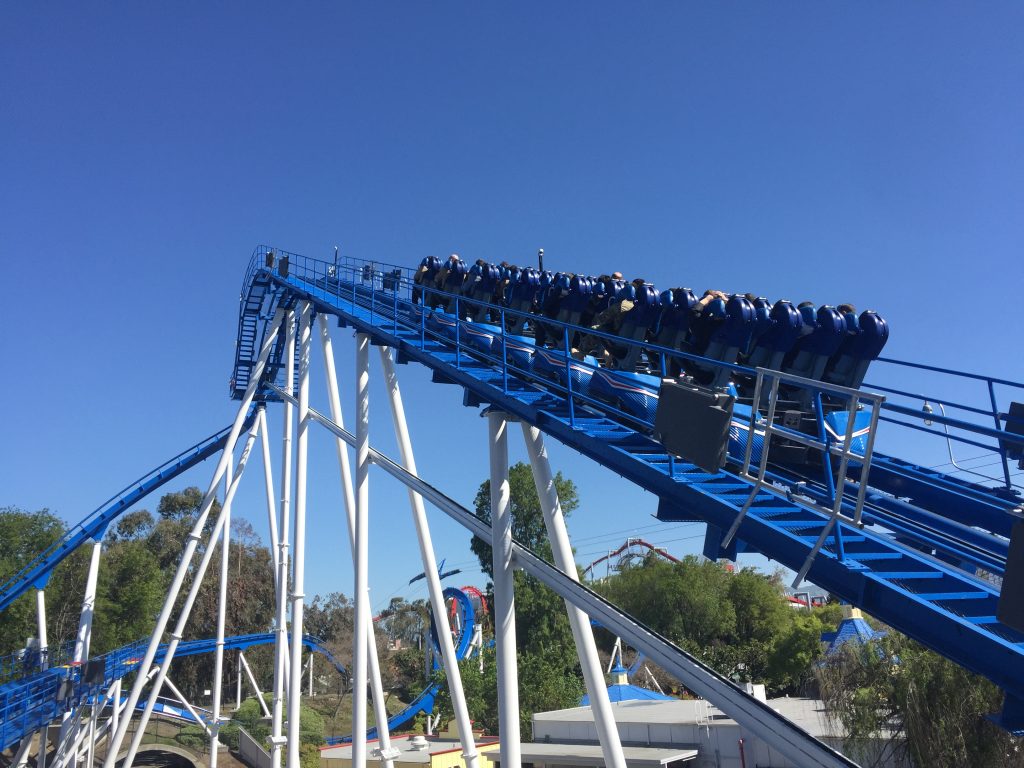 In all honesty I had very low expectations for Patriot, and I think considering this was a simple floorless conversion, it turned out wonderfully. I do wholeheartedly recommend this ride, and I think it was a good move for California’s Great America. Go out and ride it to see what you think of the new coaster experience of 2017; Patriot! 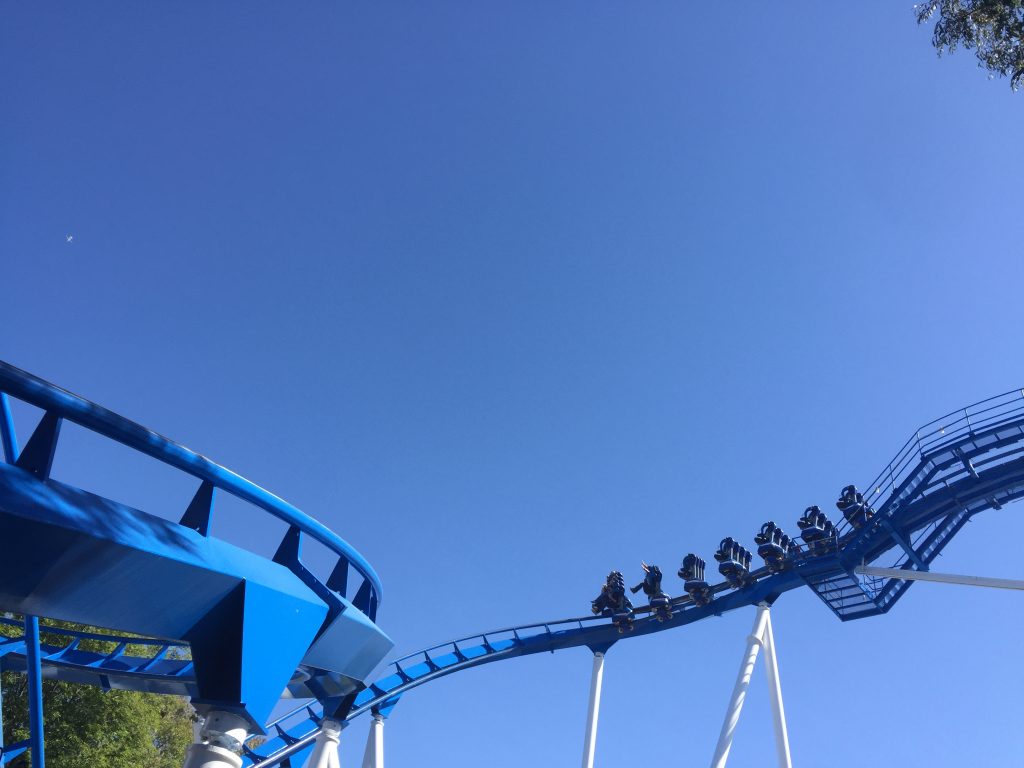 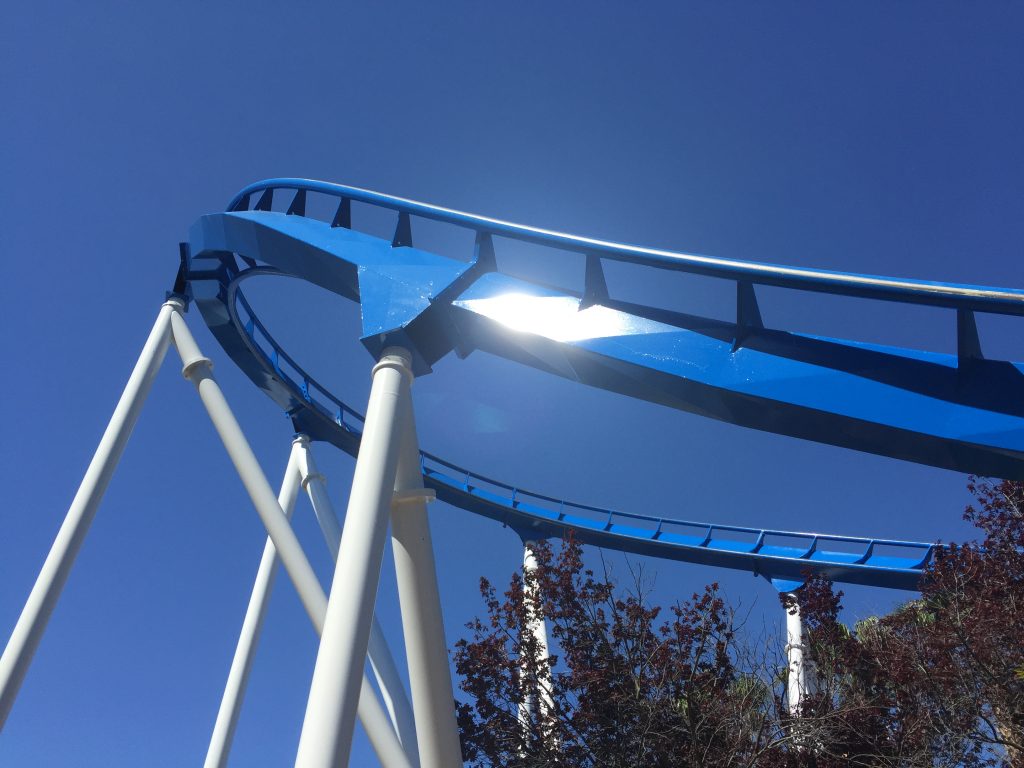 Watch an on-ride POV of the bright blue newbie below: 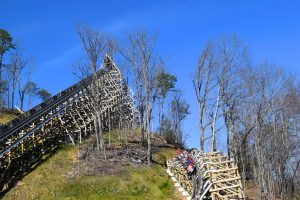 That’s all we have for this article. We will be coming out with a detailed article on the recently approved ten year plan for the park so look out for that. Other than that, stay tuned for some out of state trip reports from Dollywood, Carowinds, and Six Flags Over Georgia, as well as plenty of California park updates!

One Reply to “Patriot Opens at California’s Great America”