In August, we figured we could try to plan a little trip on a weekend to hit the two Madrid parks. The day after visiting Parque de Atracciones on the 15th August we made our way to Parque Warner.

After passing Parque Warner’s entrance and walking up the main street which oddly resemble to the one at Movie Park in Germany, (not so odd knowing both parks are the property of Parque Reunidos, and Movie Park too started its modern life as Warner Brothers) we come face to face with La Venganza del Enigma, the park’s Triple S&S tower. 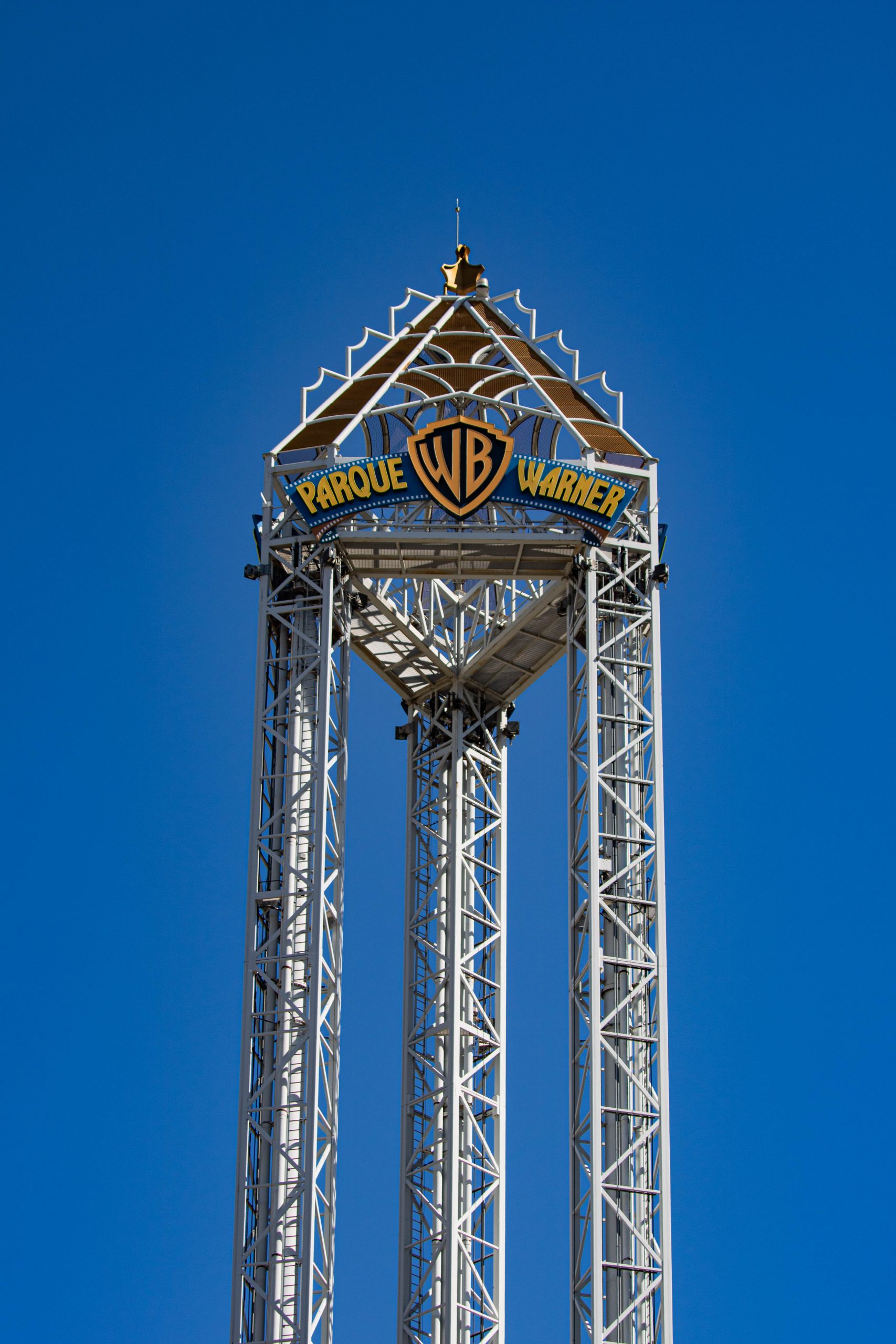 The view is quite impressive because the structure is 115m tall, making it taller than Red Force at Port Aventura. However it is more impressive when you’re standing outside than when you’re seating on one of the cars. The cycle delivers some forces but nothing too outstanding and the ride is overall rather short. 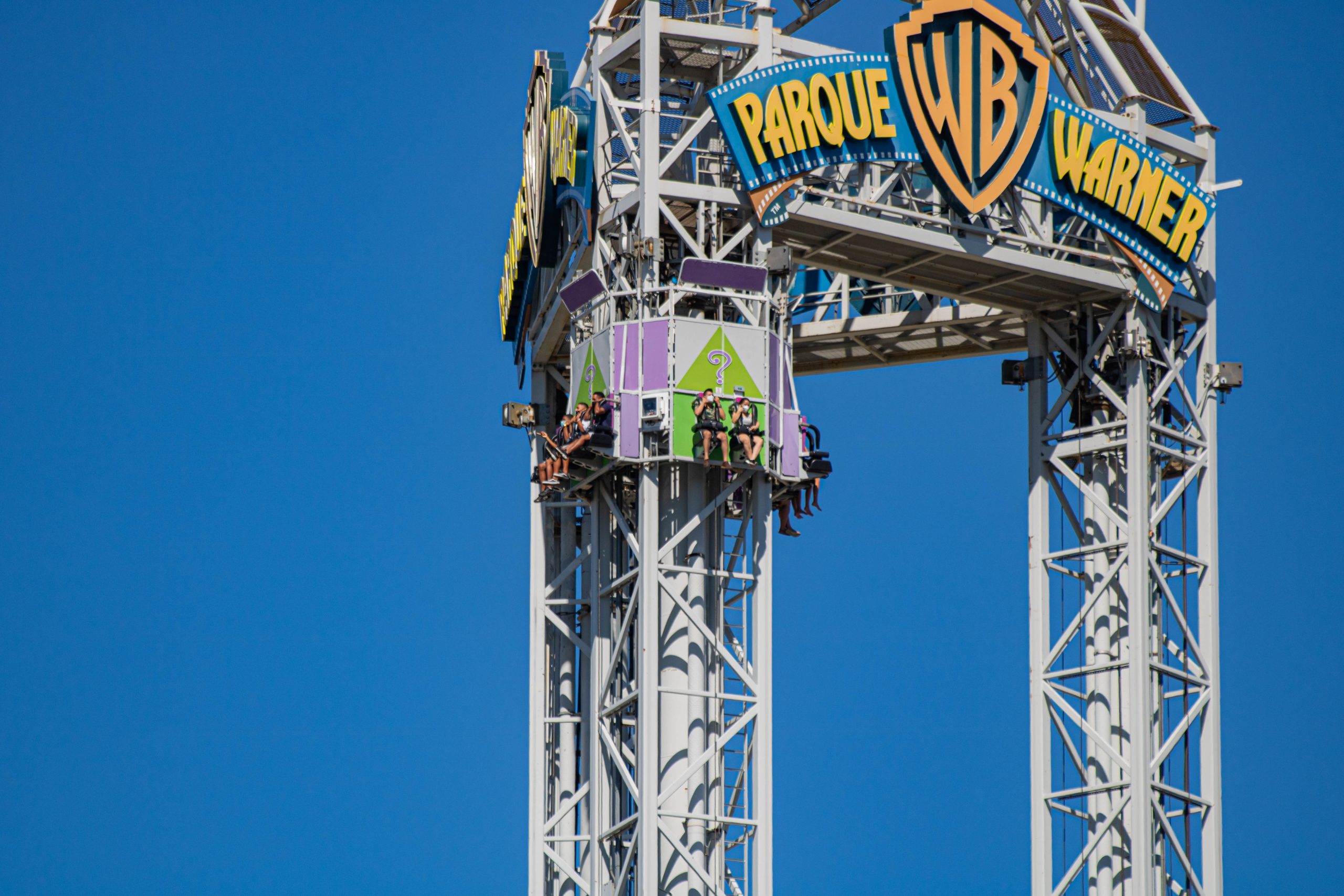 The plan was to ride the three water rides the park had to offer in the early hours of opening before they get crowded. I forgot to mention the hours of the park that day were 12pm-10pm. We first rode Rapidos ACME, the Intamin raft which reminded me a lot of Popeye’s at Island of Adventures but in a less well executed way. However we were kind of soaked after that ride. 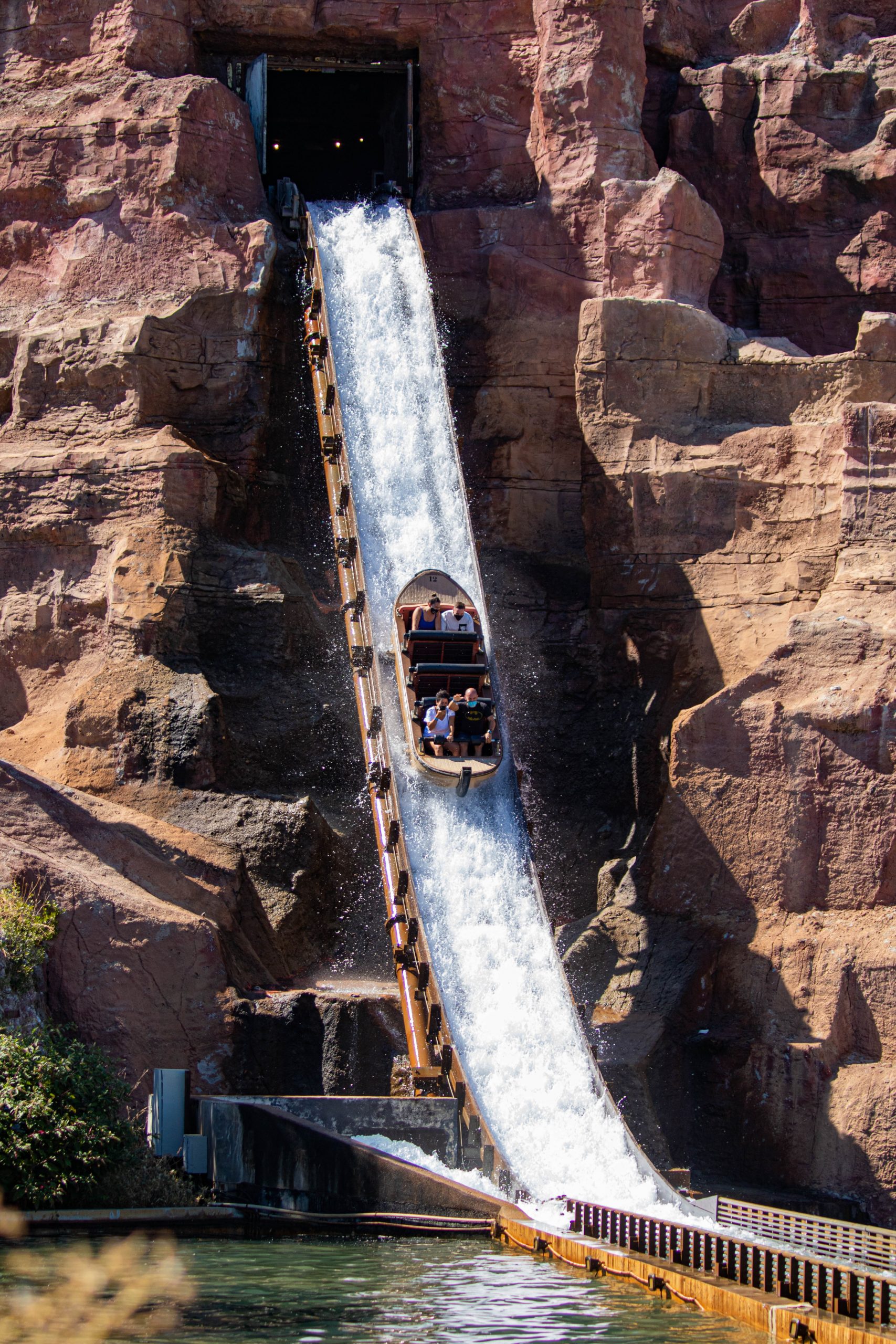 We then went to ride the Log Flume called Rio Bravo also made by Intamin. The ride itself has a quite good theming and also has a little surprise element that we don’t see often on a Log Flume: a backward drop filled with airtime. 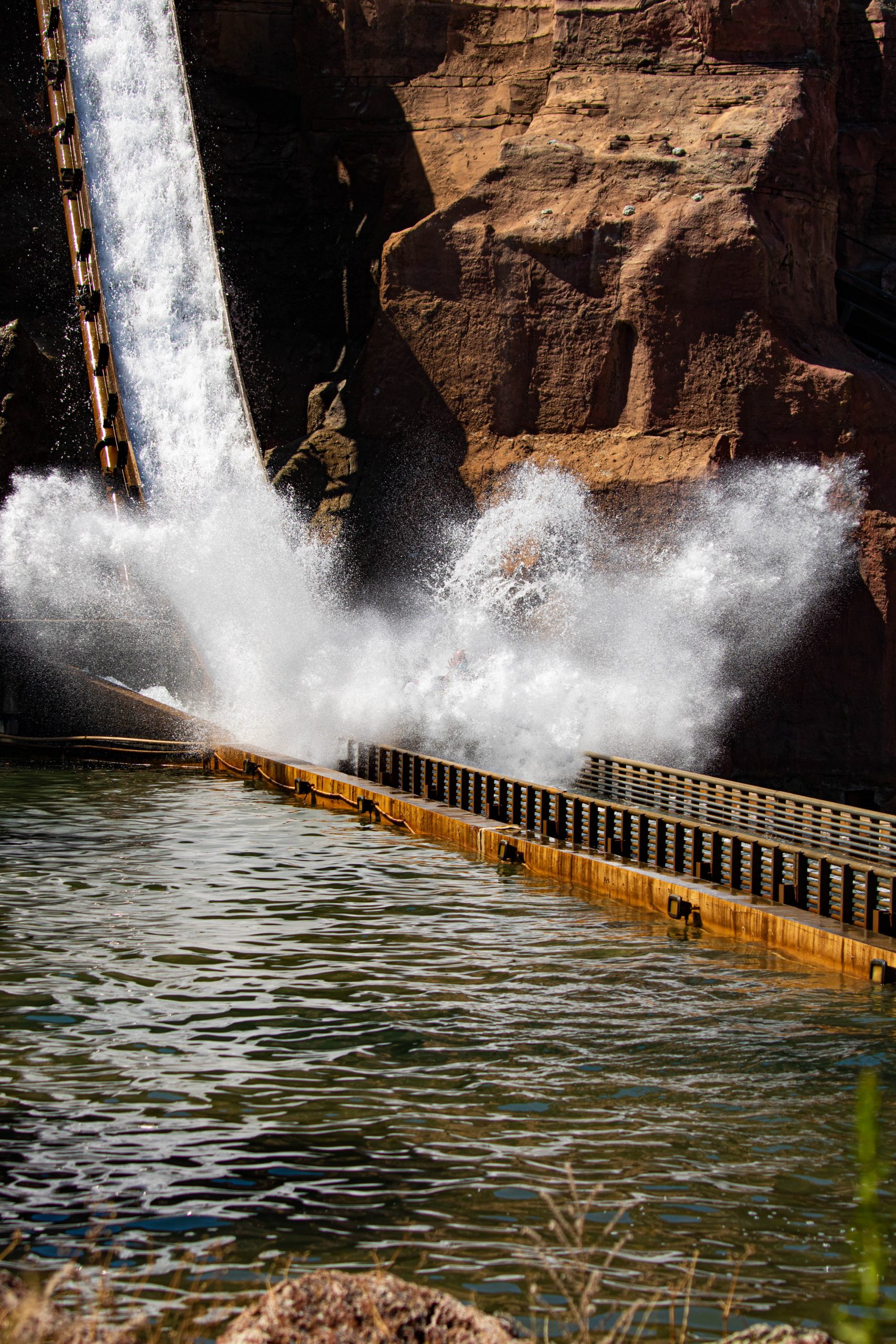 Finally we made our way to the Intamin Shoot the Chute: Cataratas Salvajes. This one is simple, lift, left turn and drop back to the station. I’m glad to say this was a big surprise for us as we got out absolutely soaked from head to toes!

Now for the coasters, we first wanted to secure our kiddie creds before the wave of people and so we did by riding Tom Y Jerry. This is a basic model of Zierer, the Tivoli Large which have a decent layout and some good forces. We also did the Mack Youngstar: Correcaminos Bip Bip. The ride isn’t very well integrated but it’s overall well done. The coaster itself gives a great ride for a family coaster, nice turns, drops, forces as well. 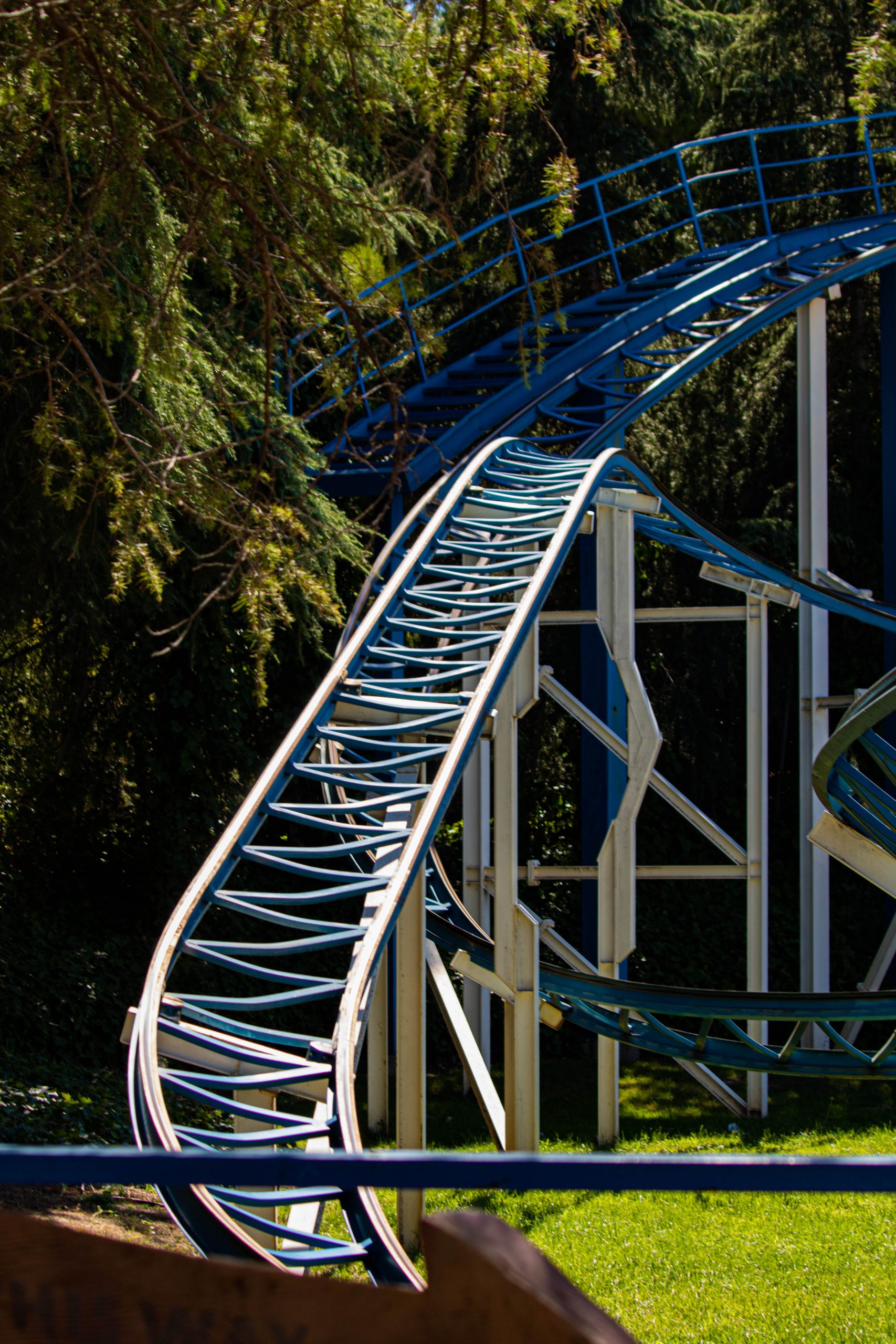 Let’s move to the reason of our visit, the really solid top 3 coasters at the park. Let’s start with Batman: Arkham Asylum. 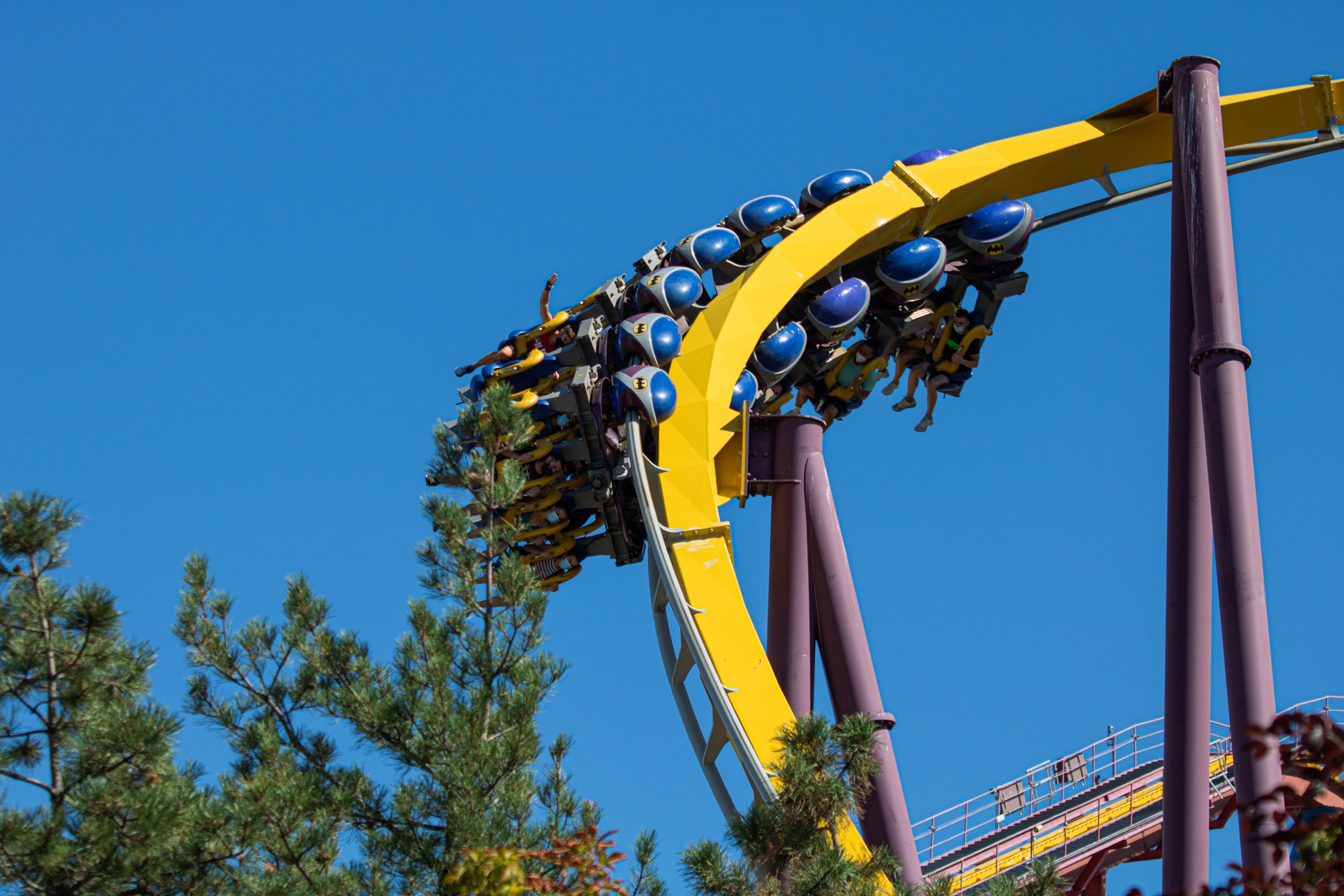 It’s a classic Batman clone from B&M but it had the reputation of being more intense than most old-school B&Ms and I must say it is kind of true, it is very intense and physical. The inversions are whippy and with the forces you feel your blood going down in your feet. Unfortunately, there are some jolts and bangs but that’s not too bothering. 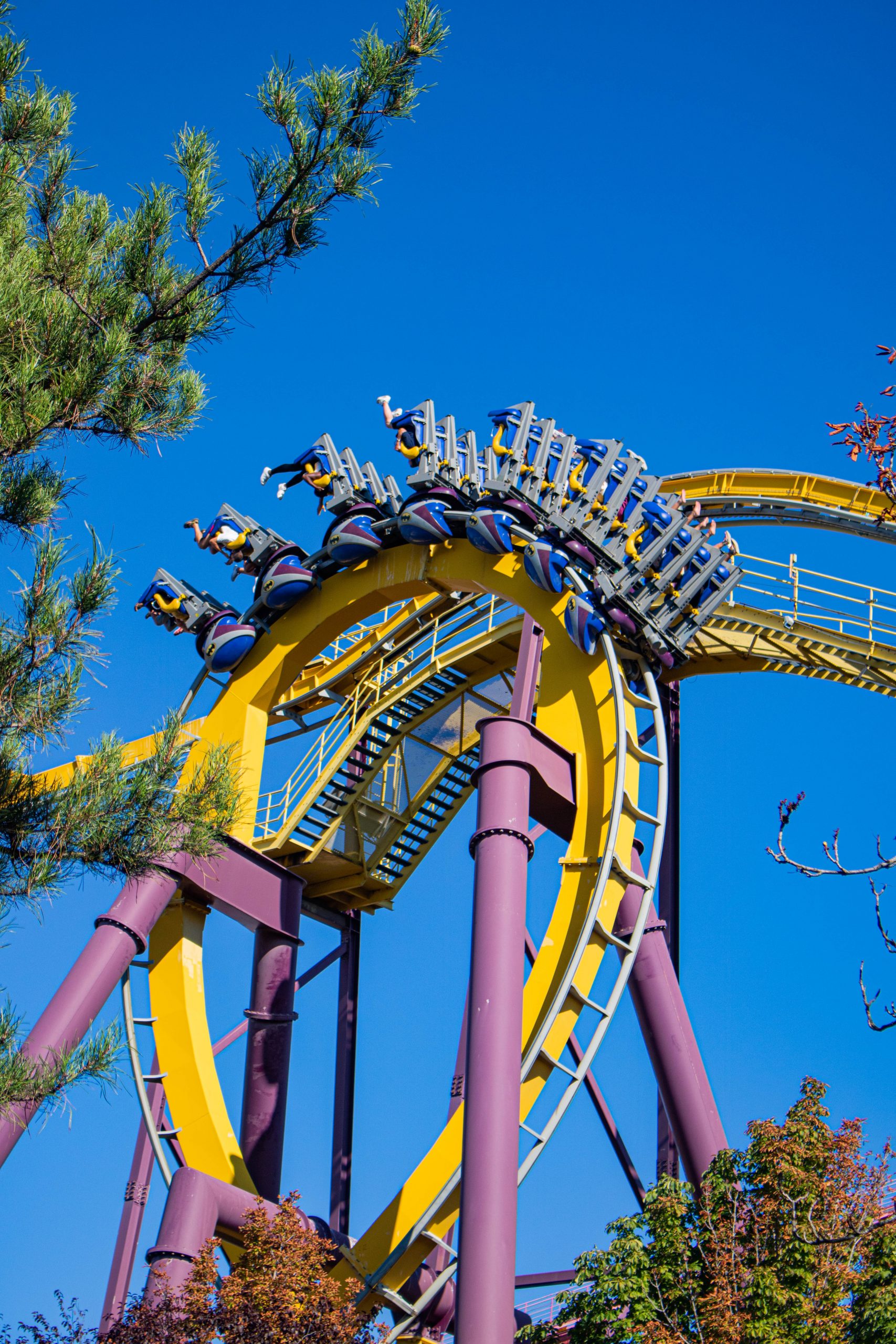 The queue is overall quite detailed and immersive and very surprising knowing that came in the Six Flags period of the park. 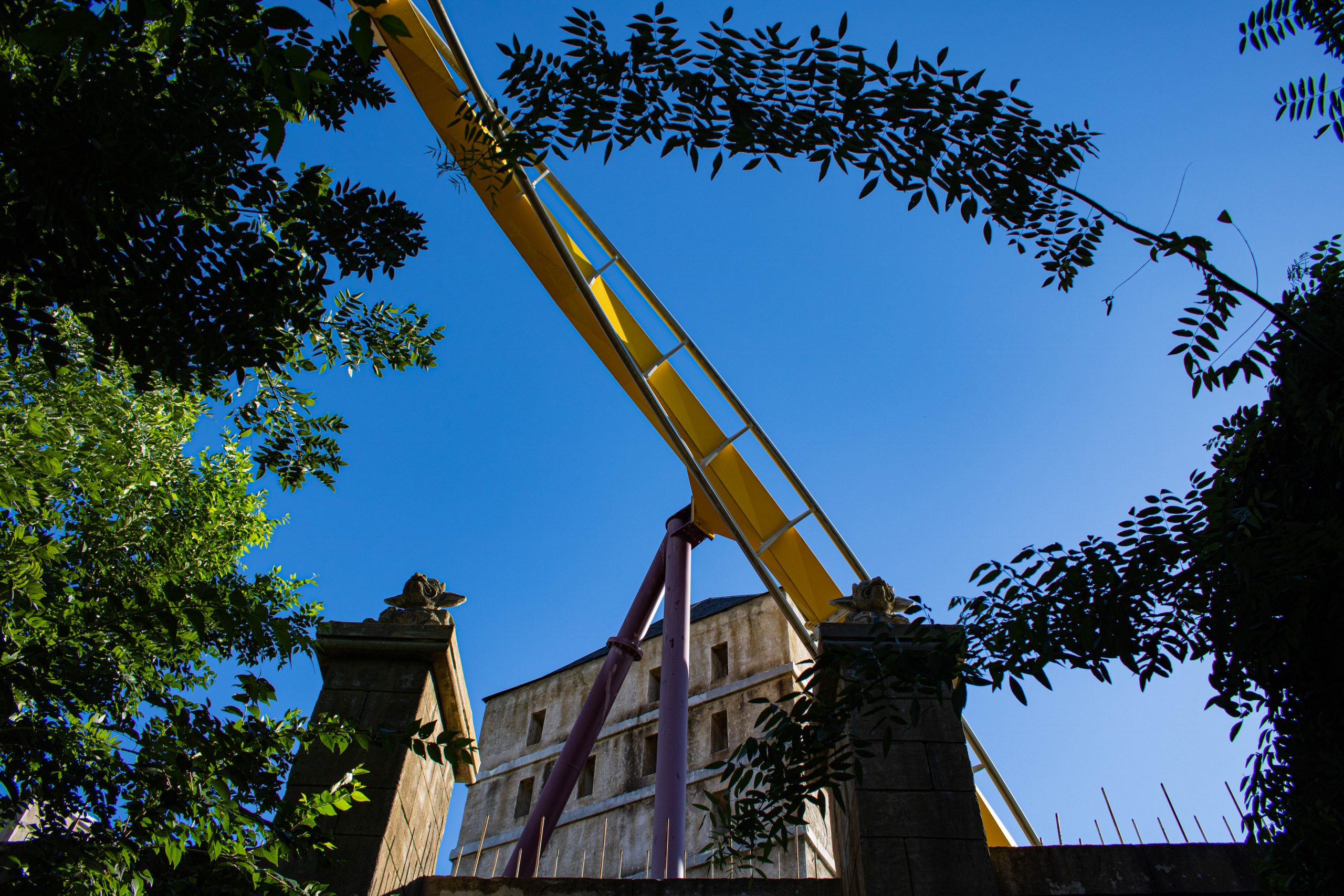 Right next to Batman stands the other B&M of the park, Superman la Atracción de Acero. Superman is floorless coaster with an original layout but not too unique either. It has the classics of a B&M looper: loop, zero-G-roll, cobra roll and corkscrews. Overall the ride delivers a lot of different sensations, from intensity to aerial acrobatics while not being weak. The inversions lack a bit of whip in my opinion. Superman even has three great airtime moments on the drop and the massive airtime hill. 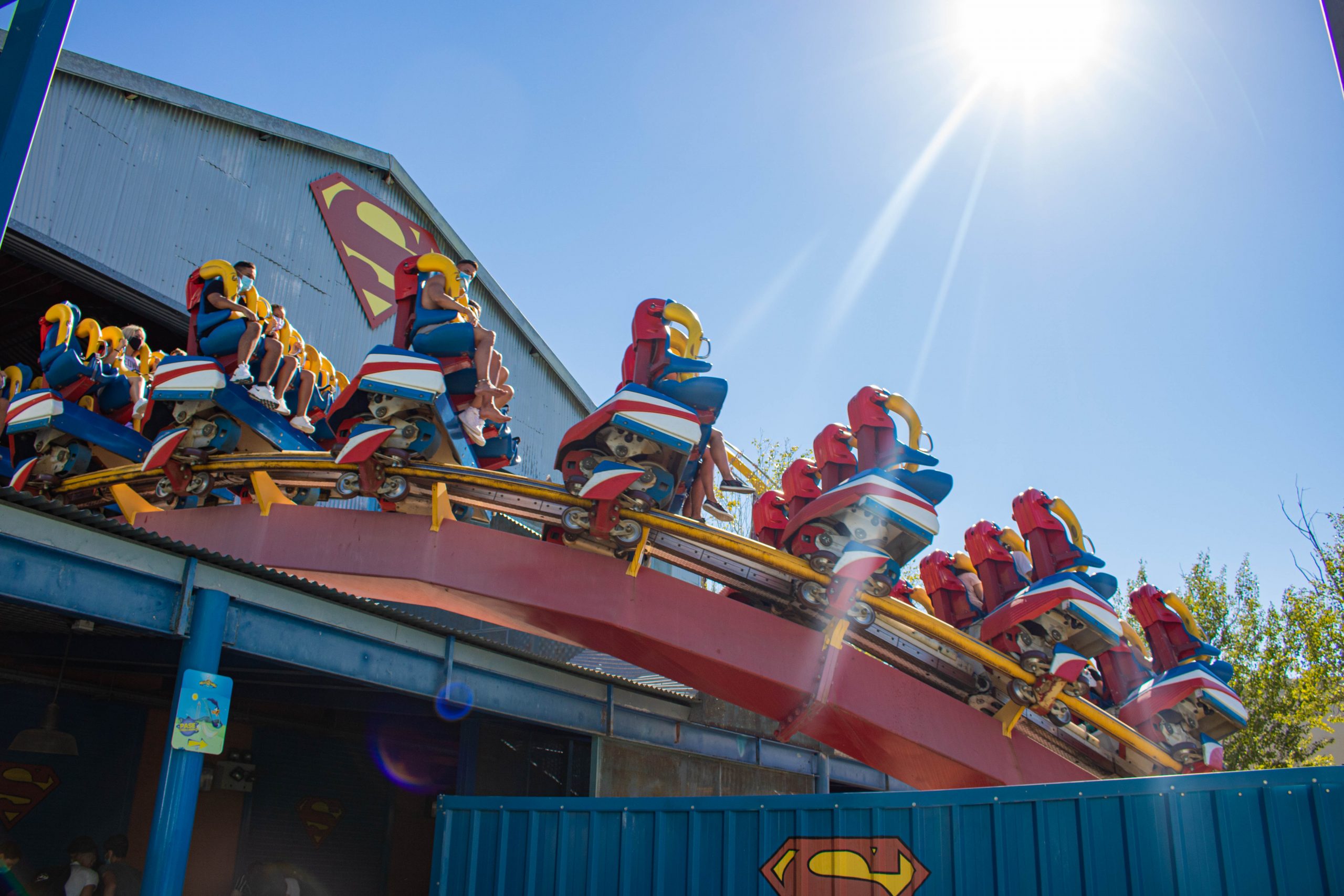 However while being globally smooth in the front part of the trains, there is a nasty rattle and also some jolts in the rear of the train. The first part of the queue is quite well-themed showing us the offices of the Daily Planet but after that there is just a pad you wait in while burning in the sun. 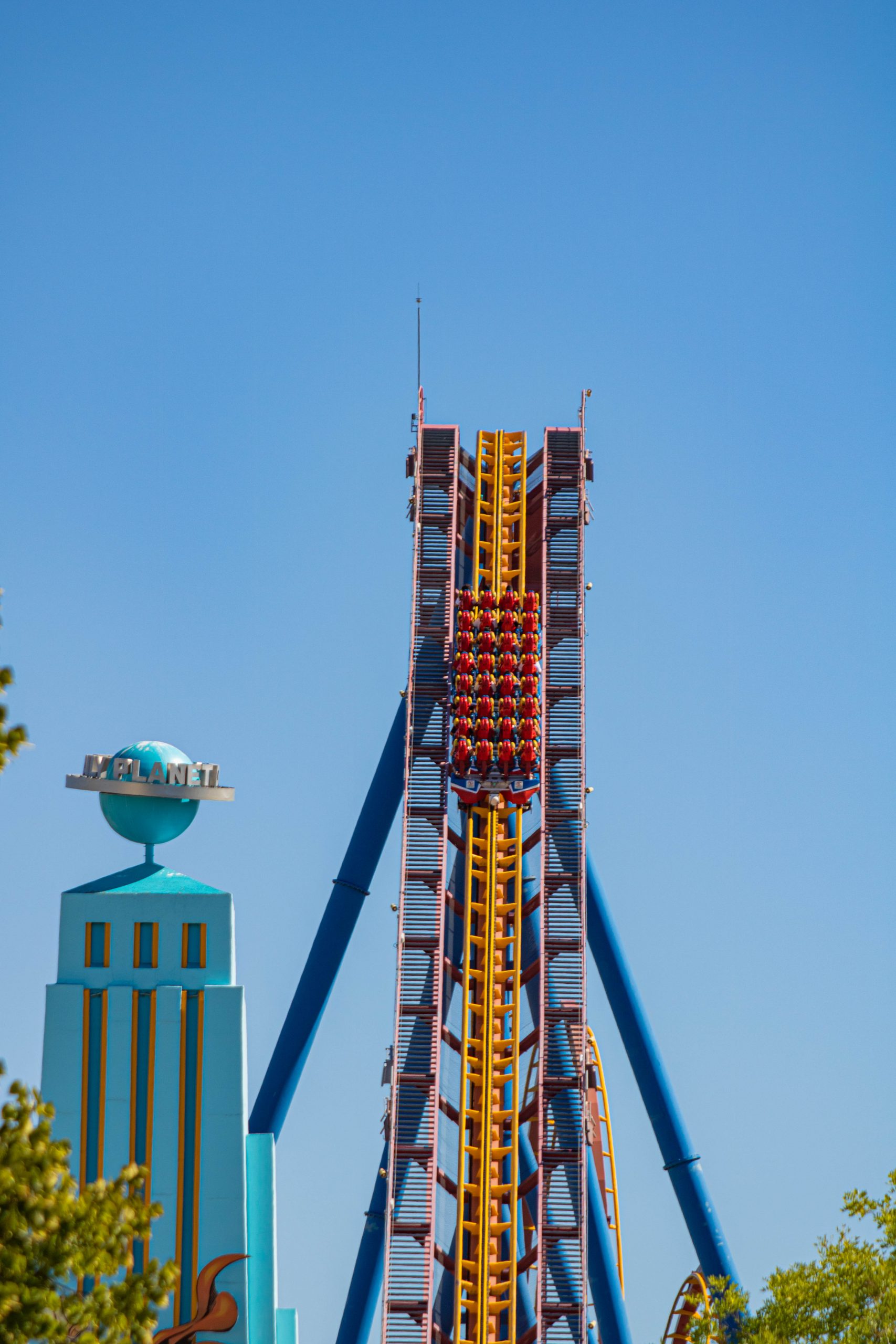 We had one last coaster to hit and it is by far the best one the park has to offer: Stunt Fall. The queue is basically just switchbacks in the sun. Stunt Fall was probably one of the biggest surprise and favorite of mine. 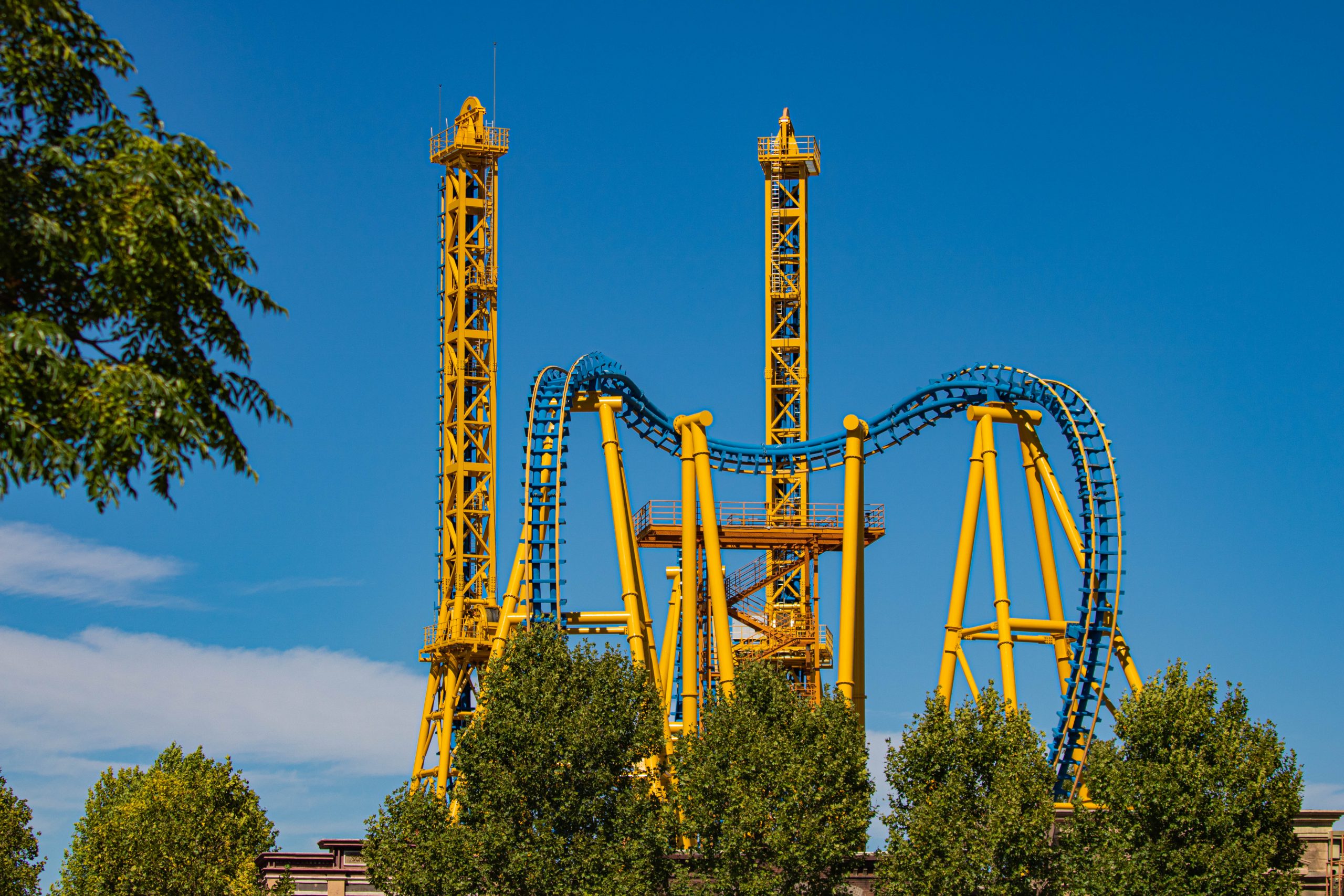 The ride is incredibly beautiful from the outside and is really imposing, creating a bit of fear while waiting. The climb of the vertical lift is one of the key moments of the ride, you hang in your restraints, not touching your seat and just having a piece of plastic maintaining you to life. The drop is equally as epic; you are just flying, not touching your seat or your restraints either, just flying. 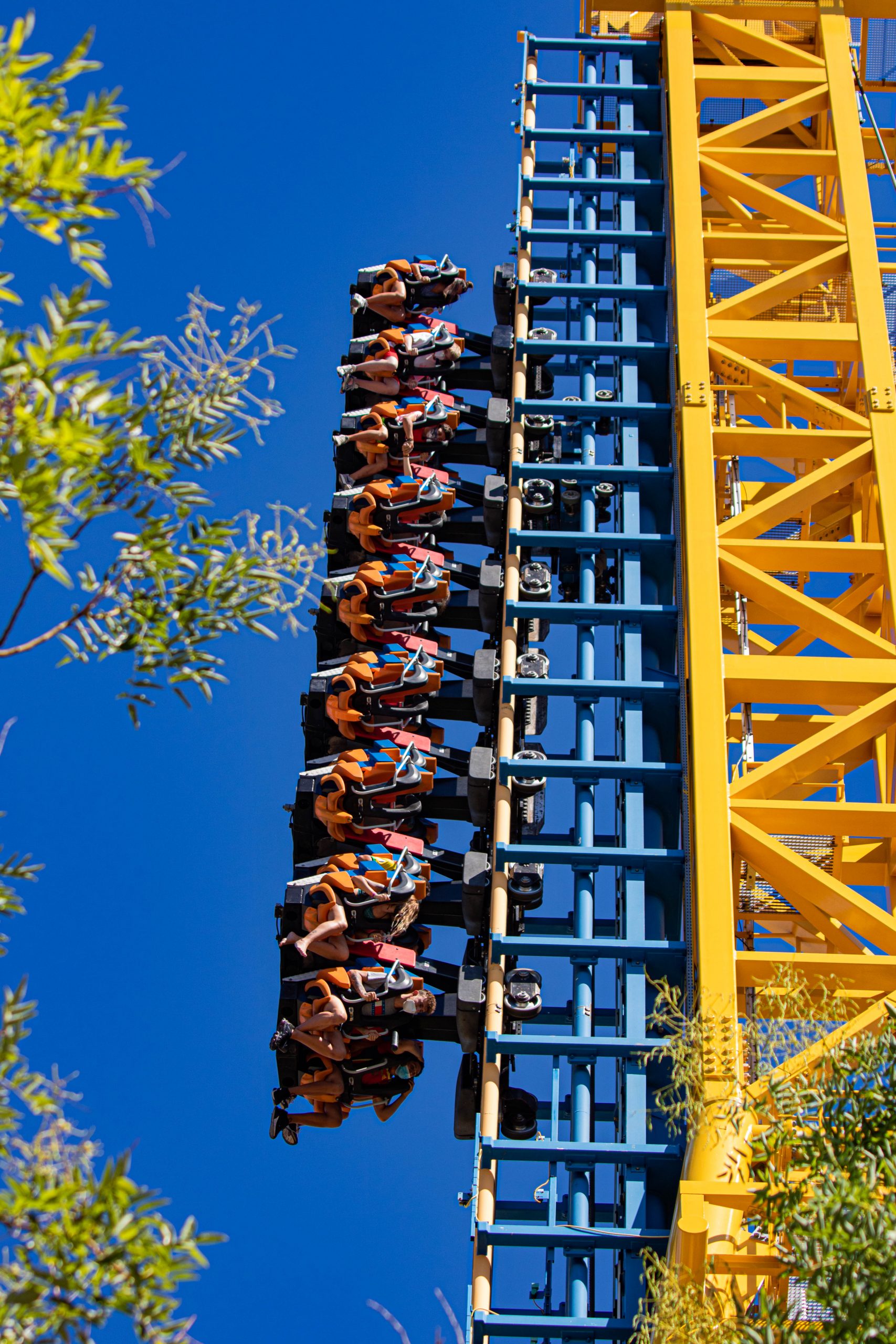 What I told you above is also worth for the backward passage of the ride, double tap of epicness. Moreover Stunt Fall delivers a smooth experience without much bodily-damage compared to any Boomerang or SLC, really the top coaster of old-gen Vekoma.

To end, let’s do a quick summary of our experience: The Covid-19 measures were really strict people respected them at 99.9% of the time so good point here, however they are really impacting the speed of the dispatches, ending with 5 minutes dispatches on Batman for example. The park overall was nice to walk in and clean, however the theming is aging because most of it dates back to 2002 when the park opened and not much was added since. Finally I have to say we didn’t get to ride Coaster Express because it was in a retracking period but here are a few pics of it to satisfy you. 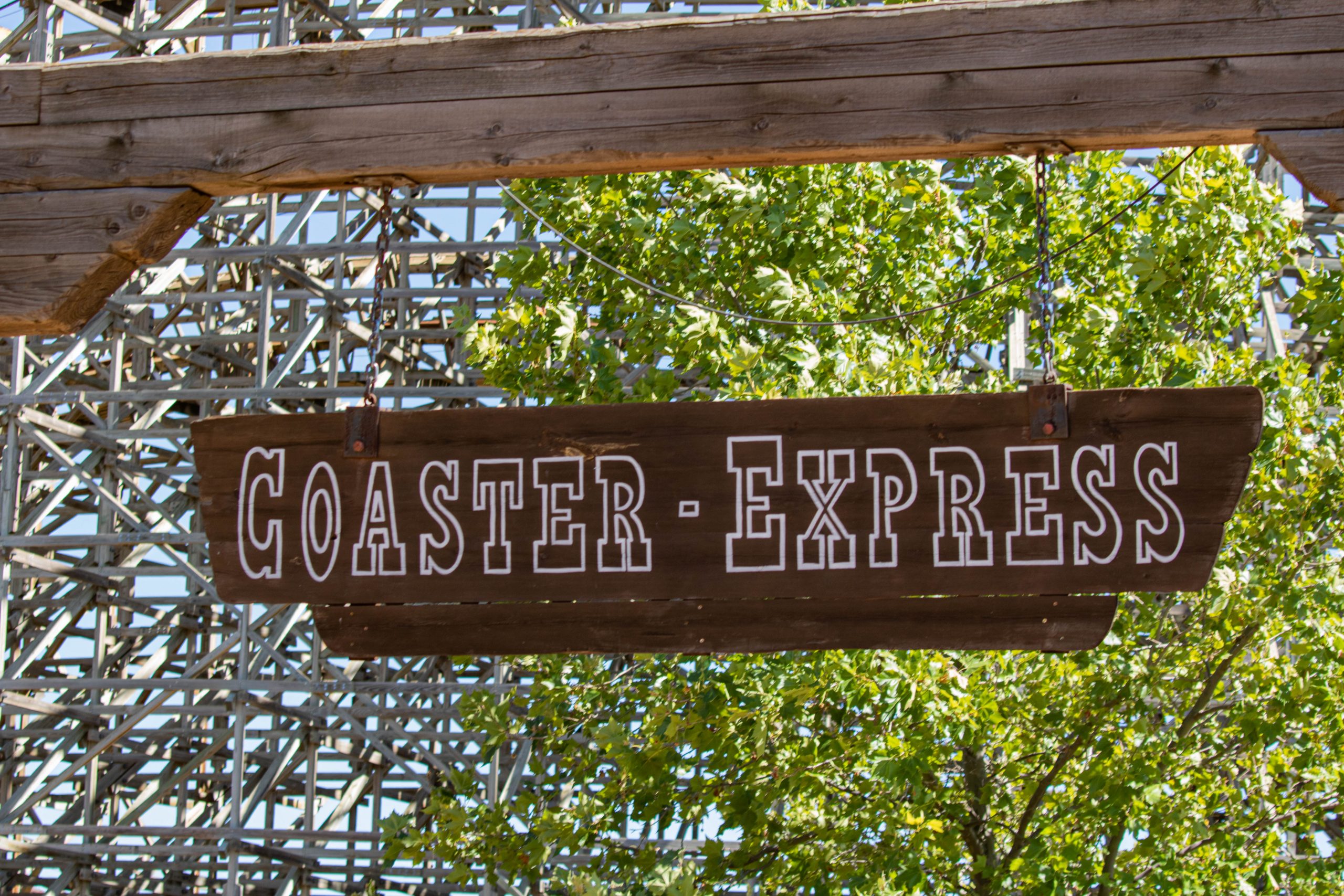 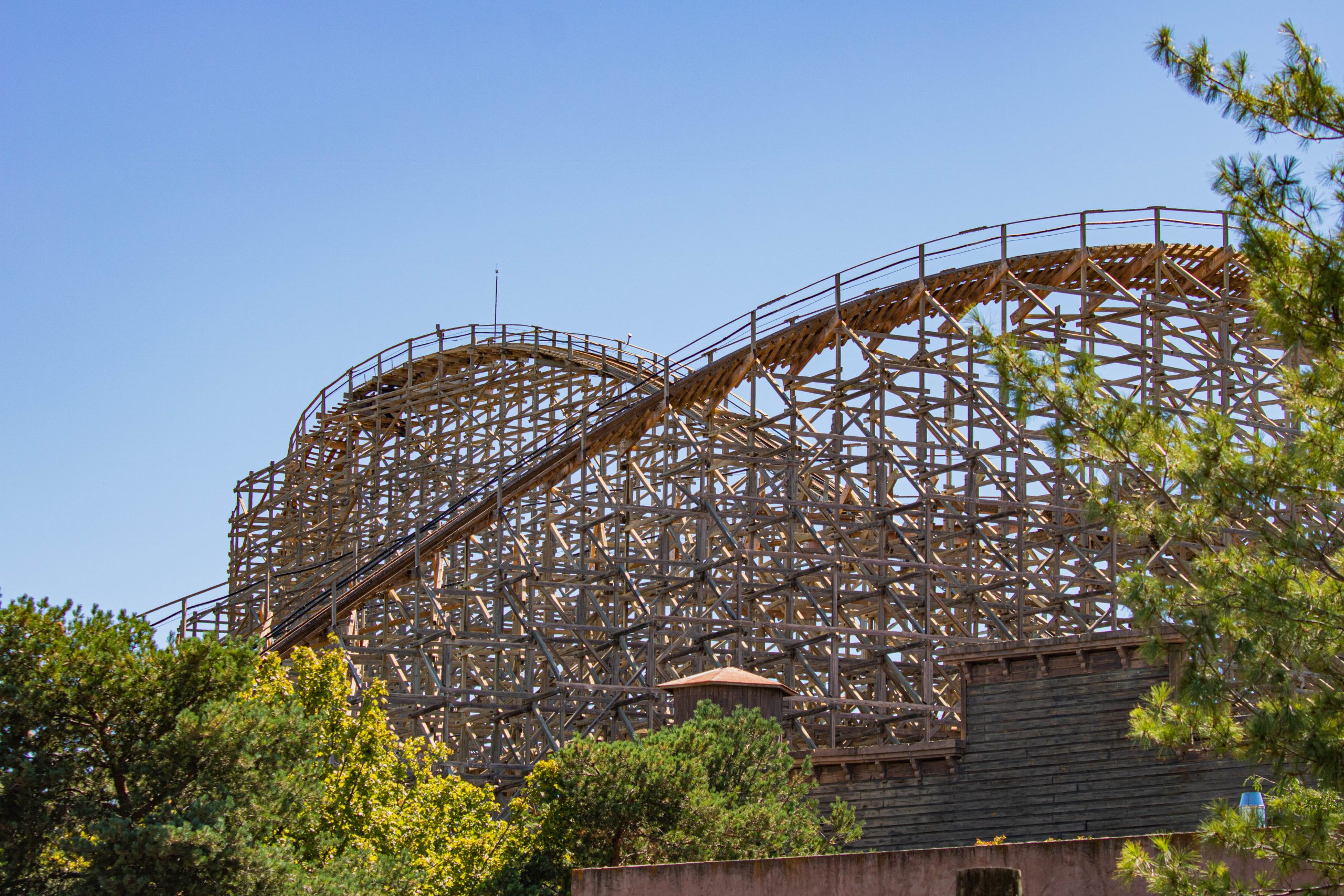