Another few days have gone by and now we have more raptors around the ride, finished track work, and a new bridge connecting Jurassic Park with the Lost Continent. Today’s update highlights all that and we’ve got a ton of pictures for you.

We’ll start with a few shots from @bioreconstruct who beautifully captured the raptors sitting inside the ‘enclosure’ where the first half of the ride will take place: 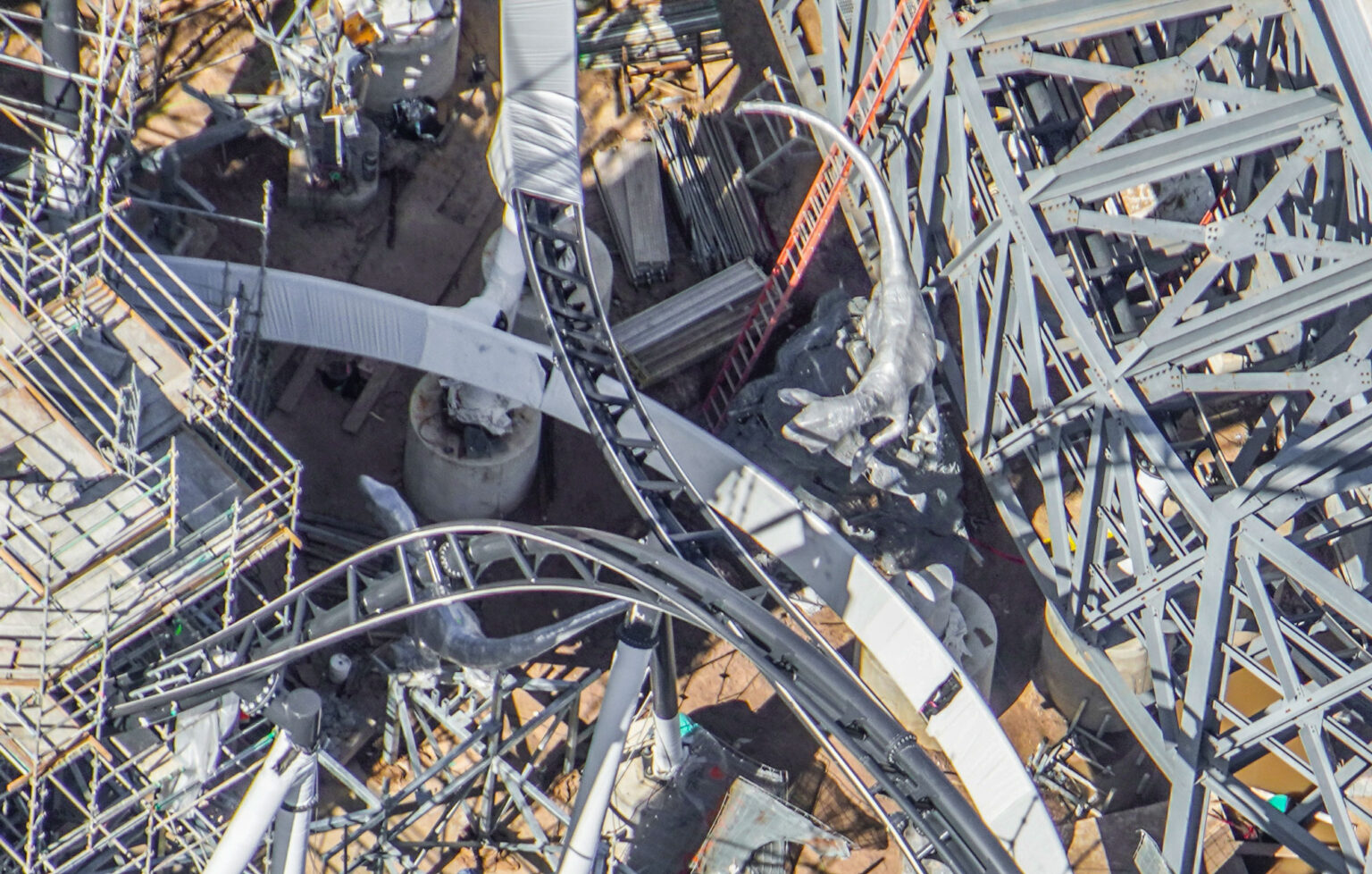 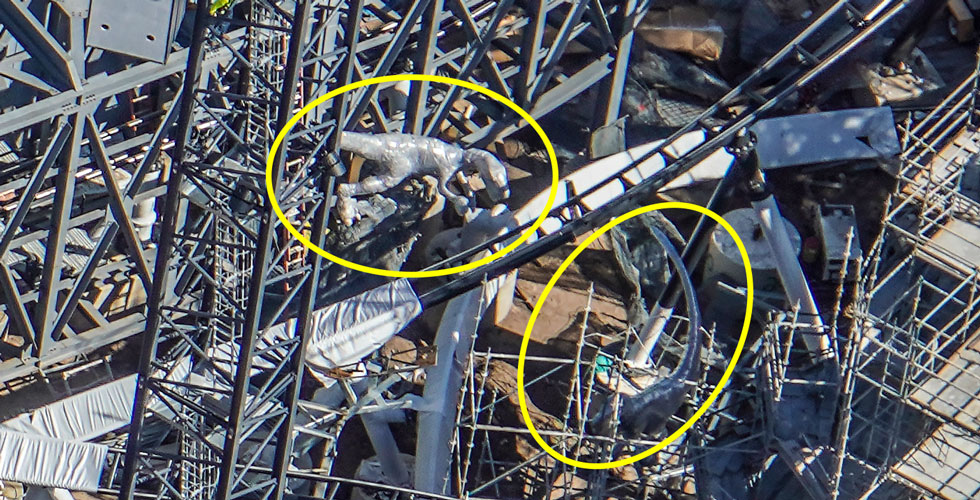 We don’t have a helicopter, so we couldn’t quite peek in like that. However, we do have amazing new shots of the finished track work and the views from the new bridge that navigates directly below the coaster!

First off, something that is new since our last update is the S-turn into the final brakes. It’s now completed. 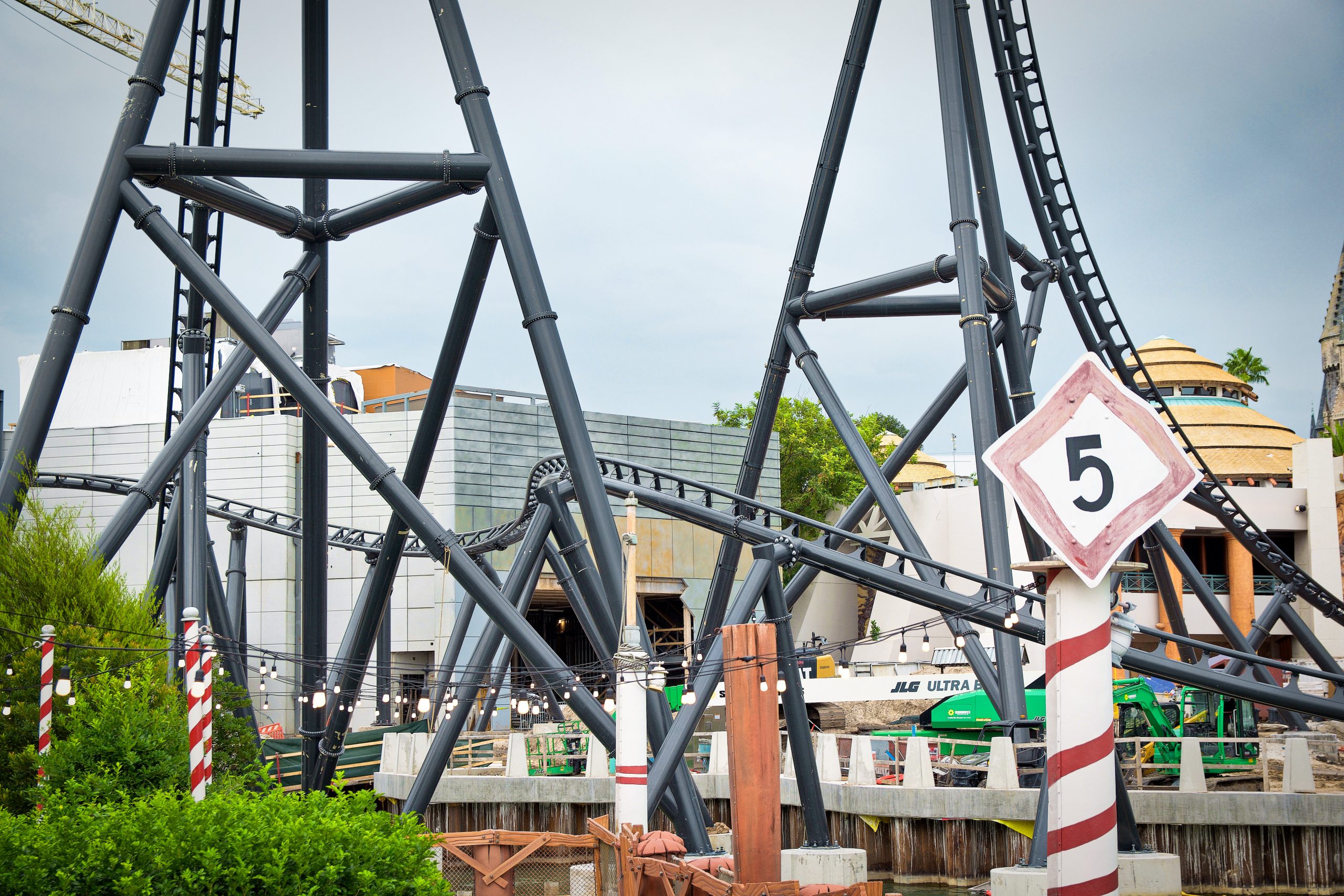 If I am not mistaken, the turn connecting the brakes with the station infrastructure is now completed as well – meaning all track has been placed. 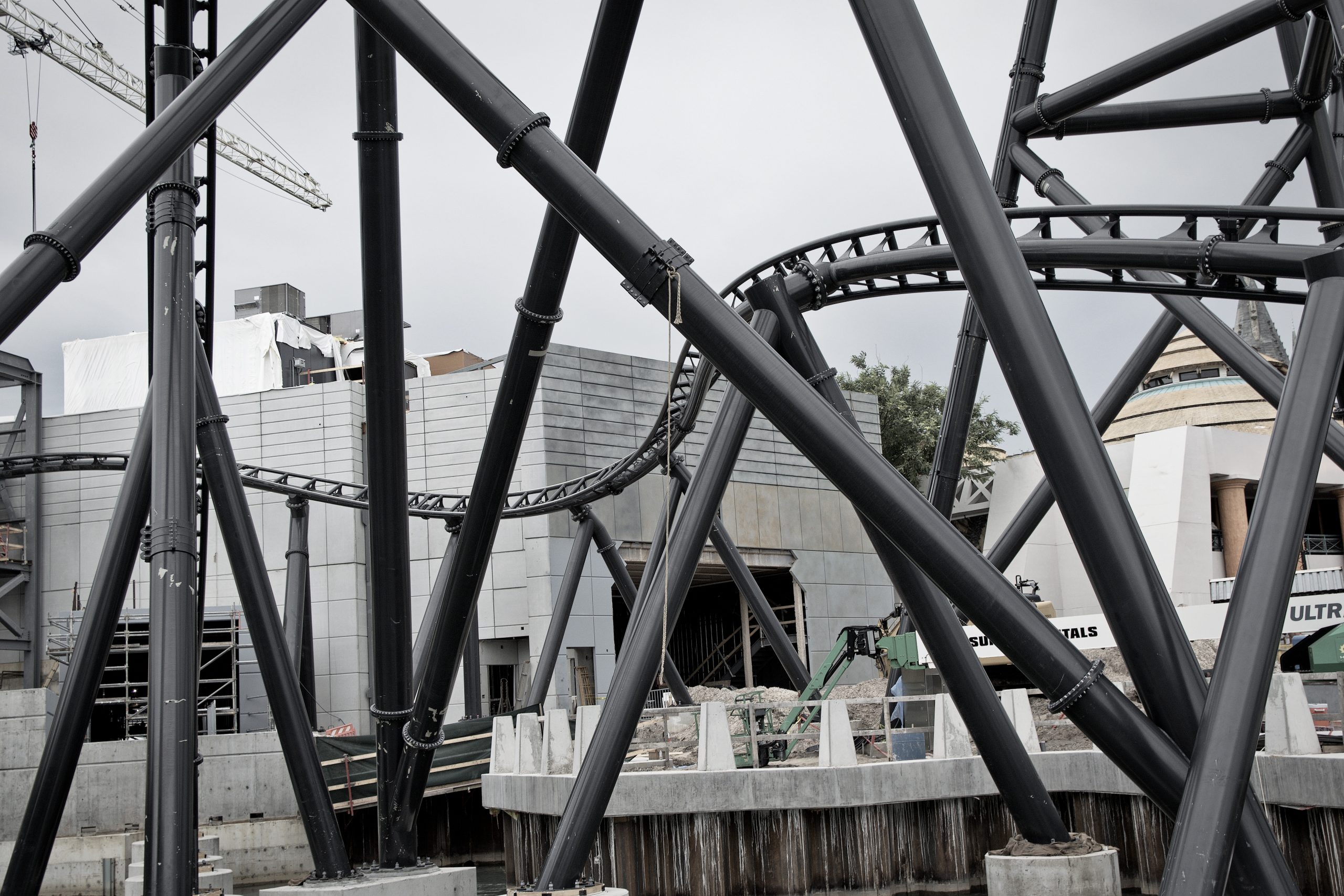 The finale promises to be a final kick of air and a signature Intamin transition before the ride is over. 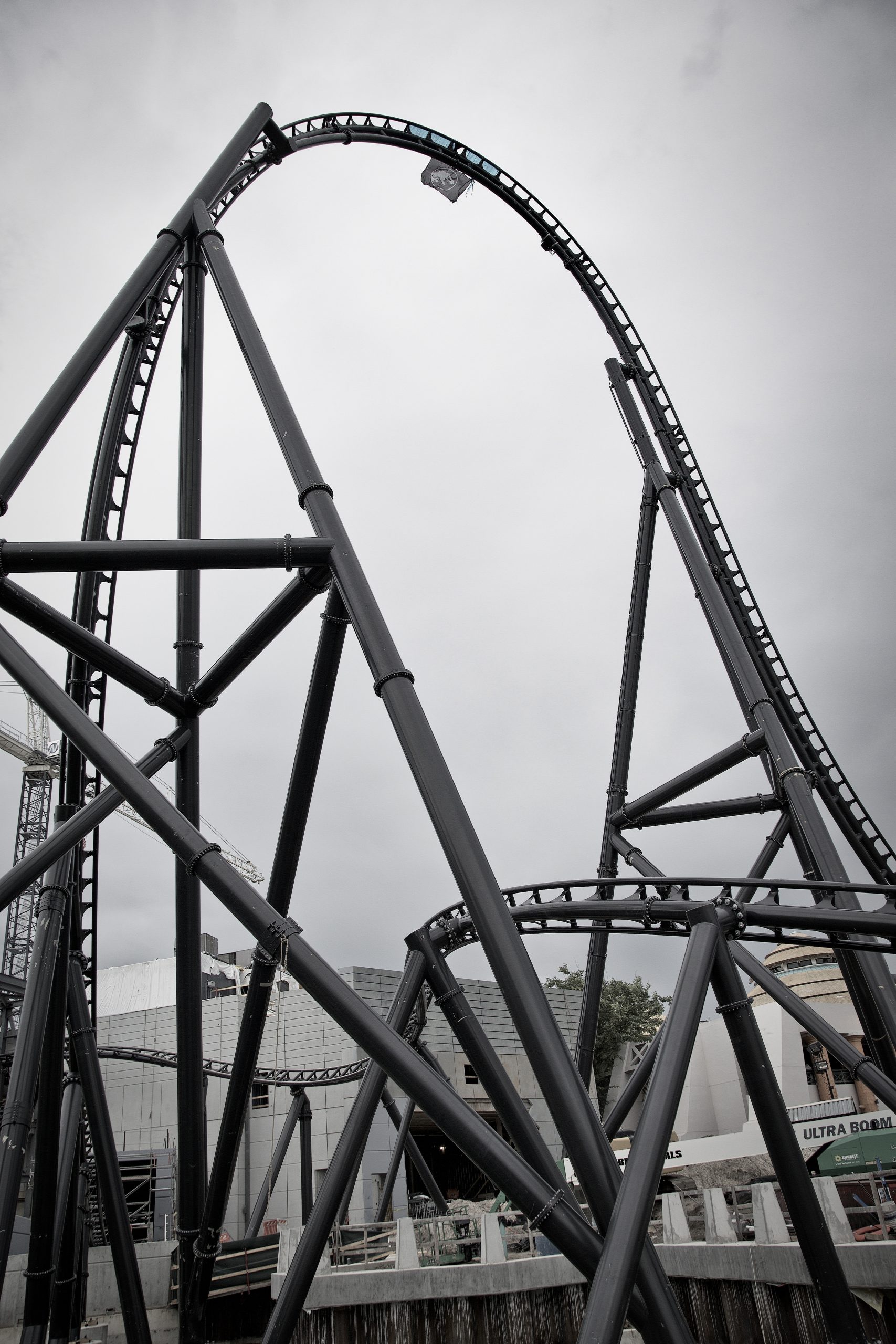 Standing next to Popeye and Bluto’s Bilge Rat Barges you get a great look at the S-turn. 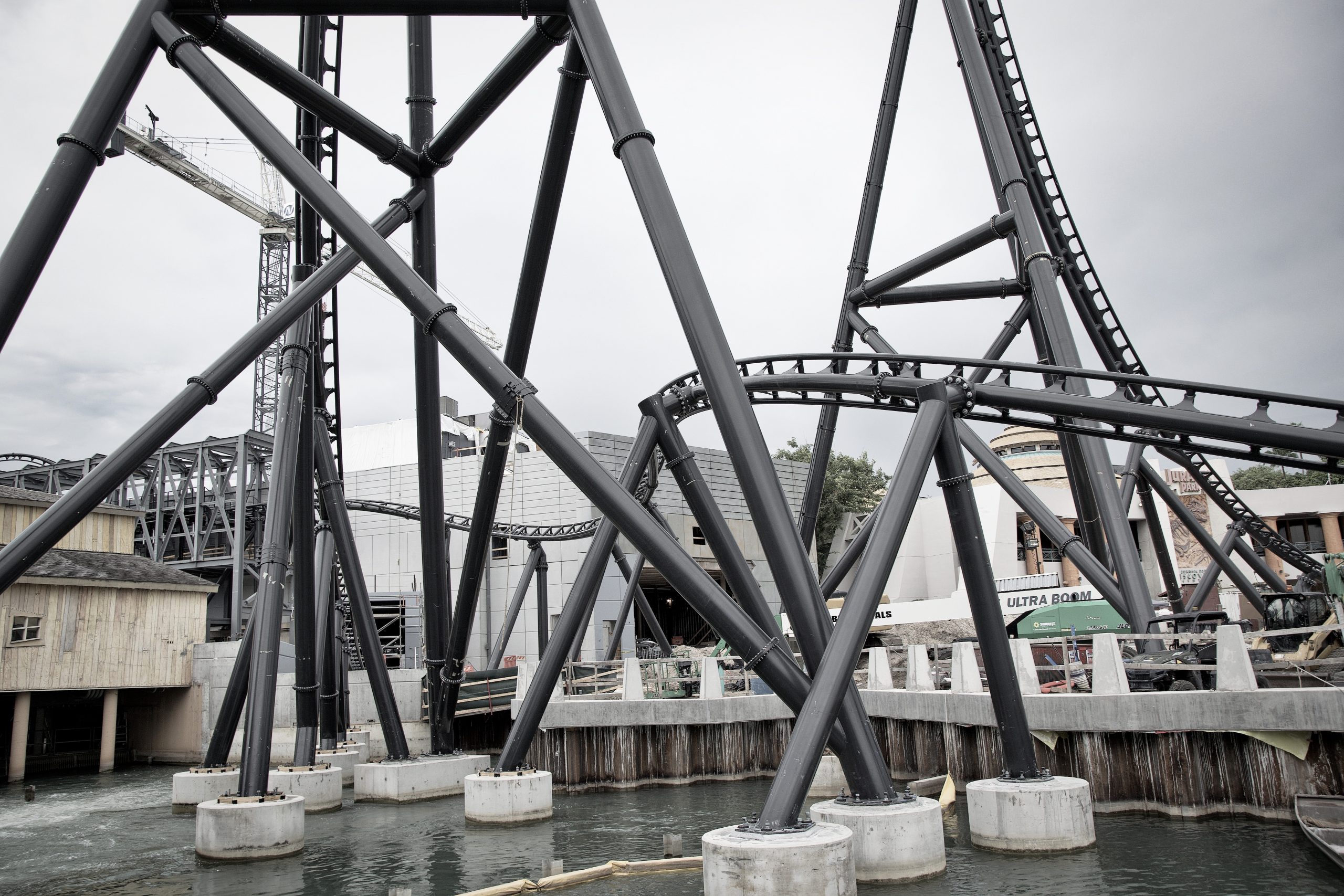 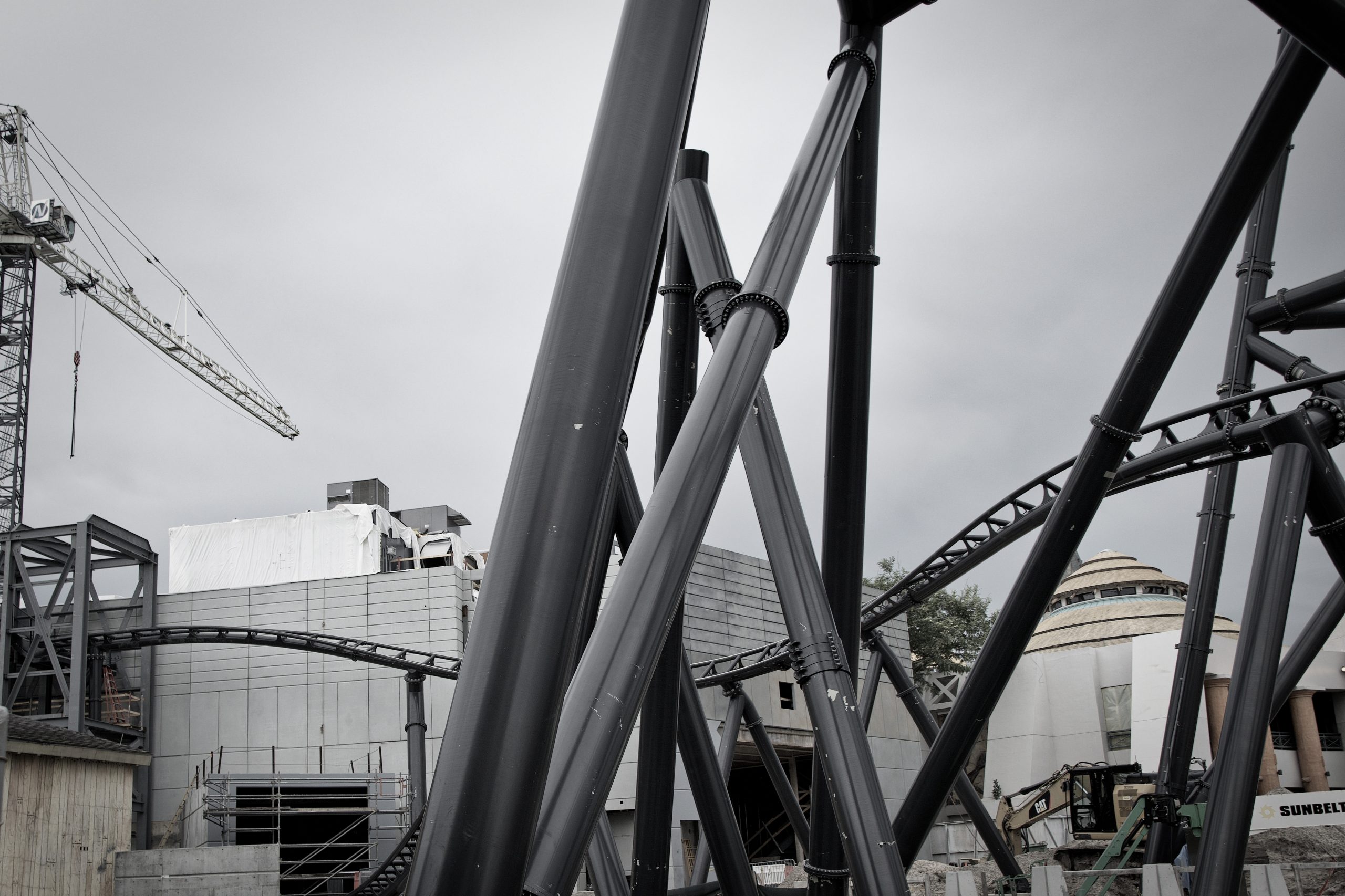 Even from across the water the finale is quite prominent, though it remains dwarfed by the giant top hat above. 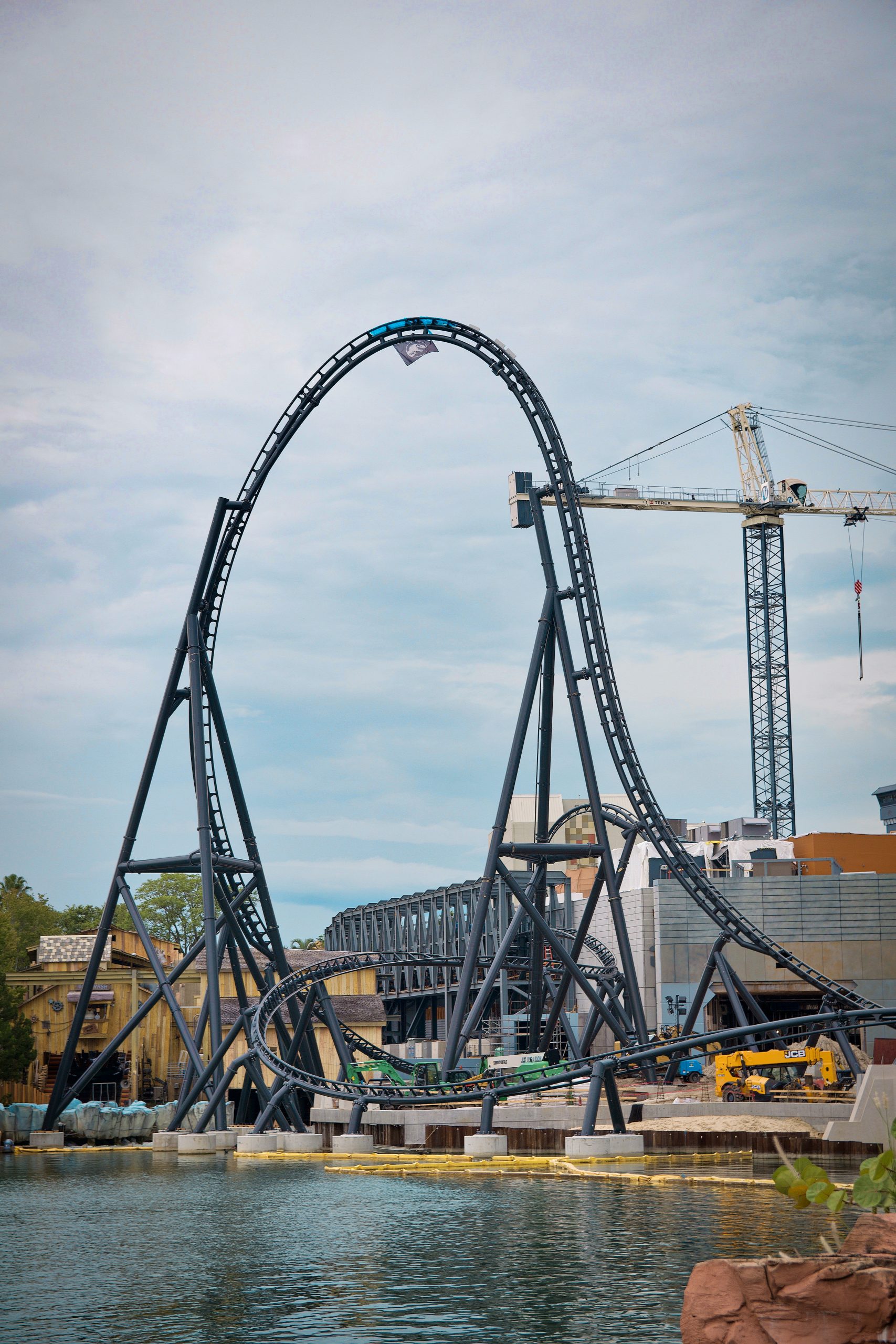 Weather was particularly wild during today’s trip to the park – so enjoy the scattered style of picture editing that I decided to take on. These pictures would have been real ugly without it! 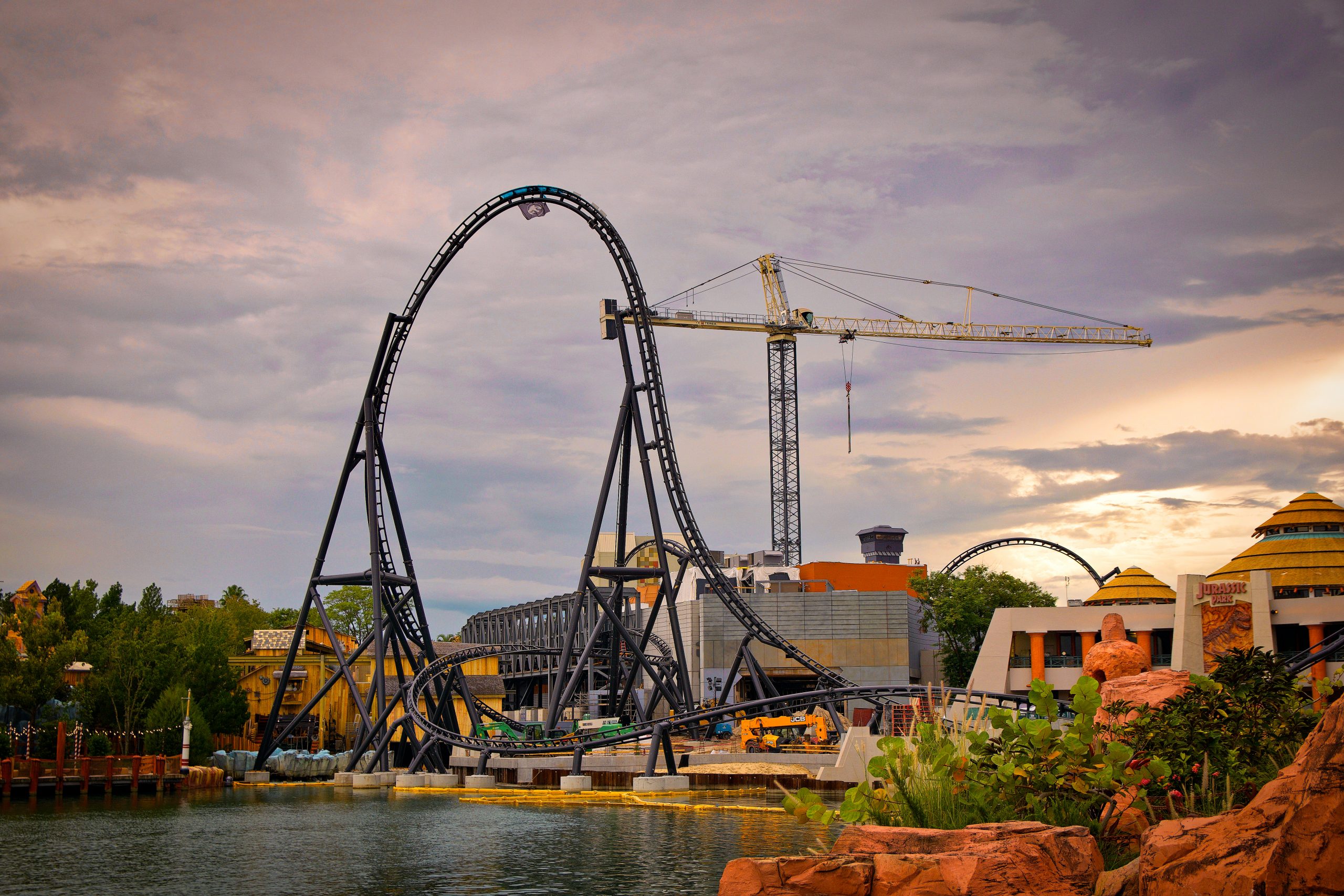 Here’s a quick last look at the S-turn, let’s move on!

I always try to throw in some shots that help with showing the magnitude of this coaster. The second half alone is easily the size of Hulk. 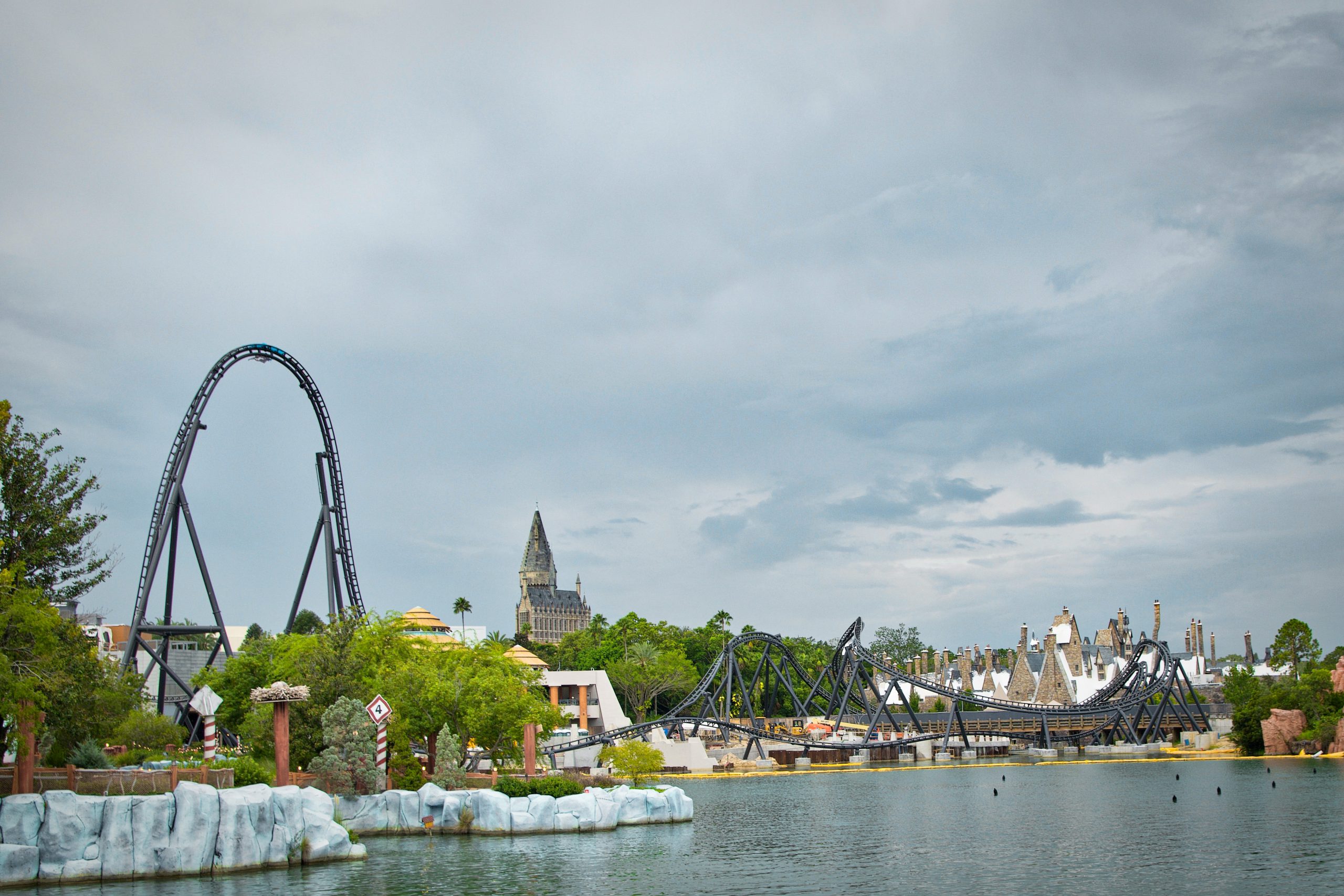 I could stare at these elements literally all day long. 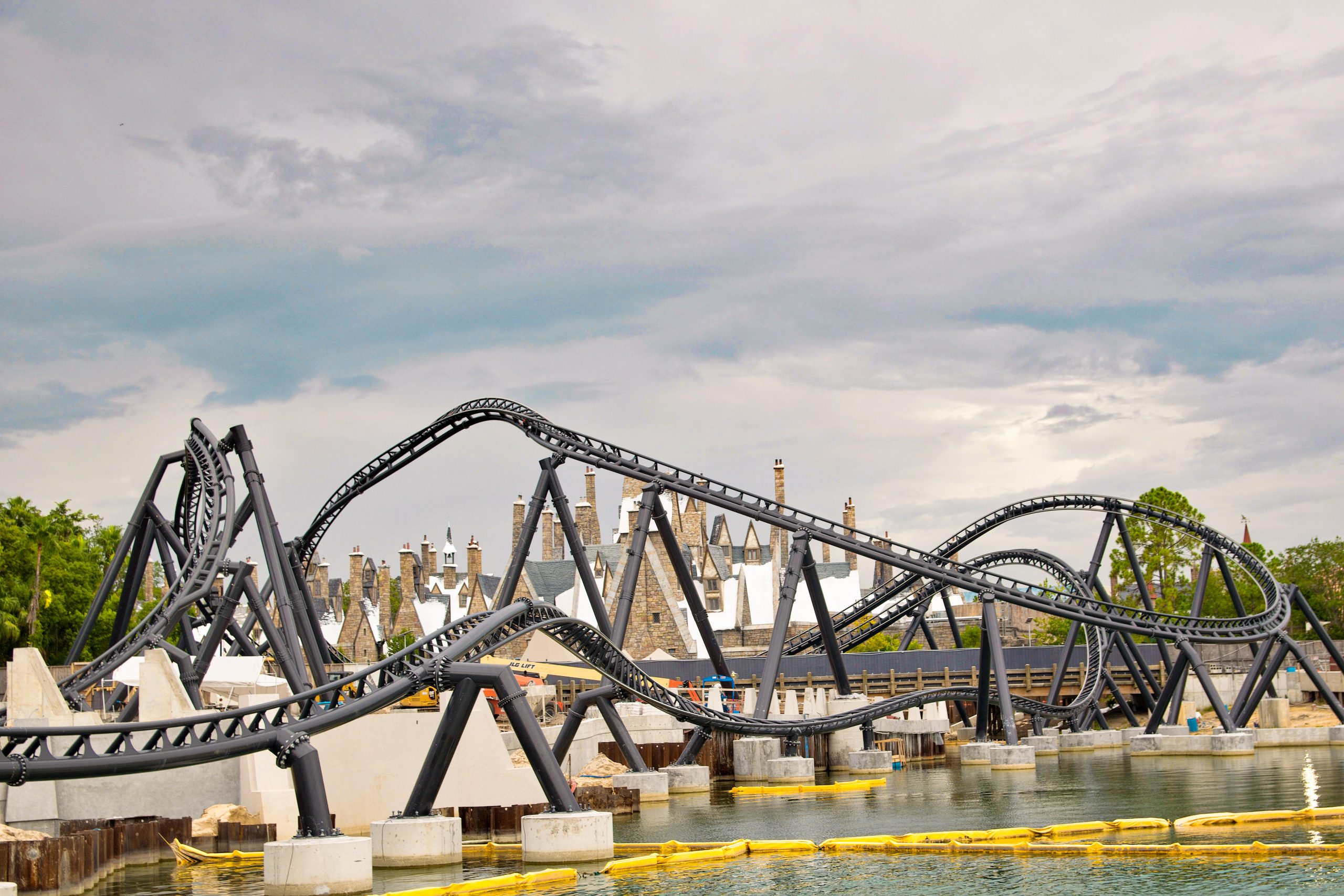 I am also amazed that, though track work is complete and the coaster is becoming an internet sensation, Universal still has yet to make any sort of acknowledgement about it even existing. 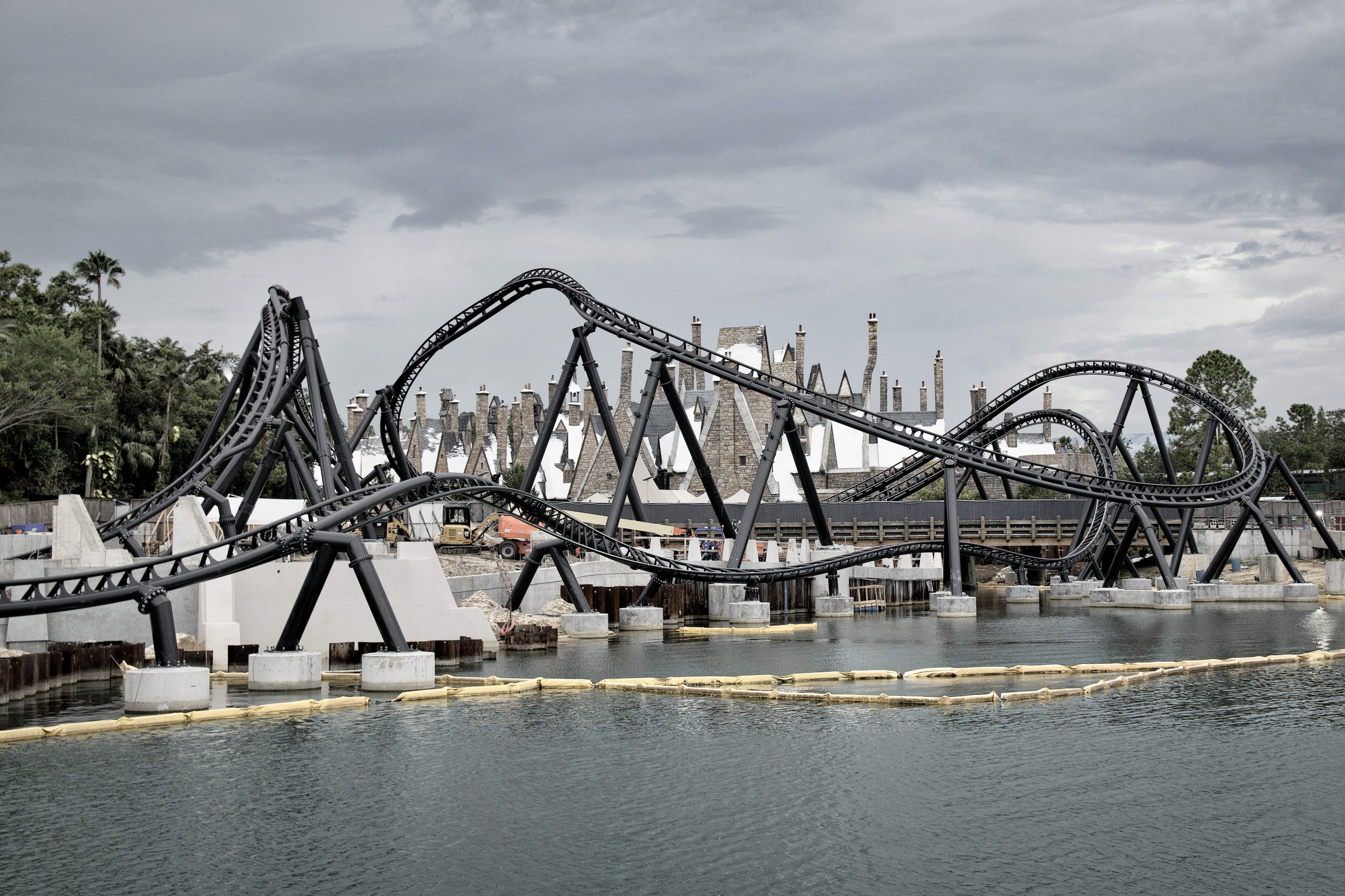 I think I speak for a lot of readers when I say this is the element I look forward to most: 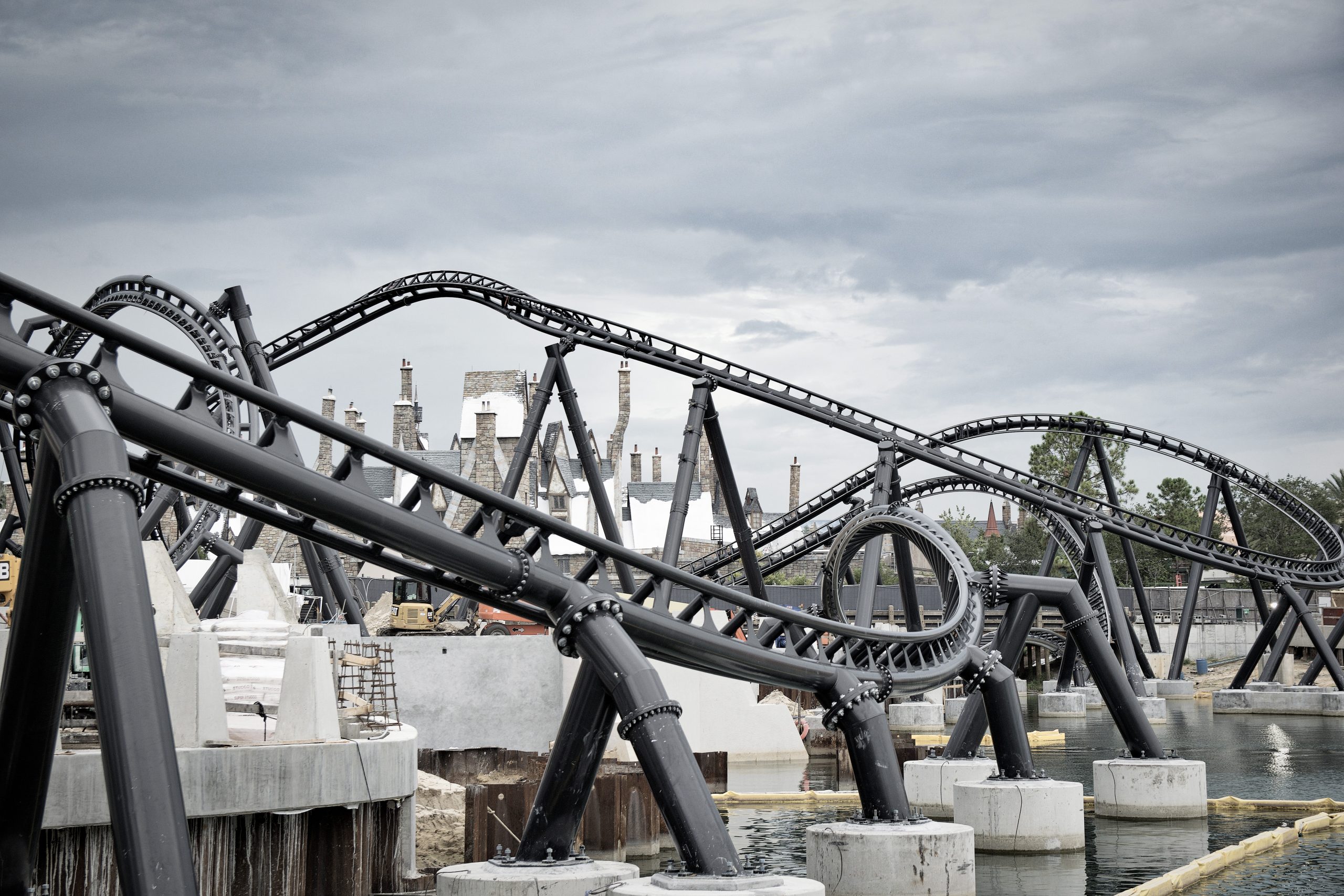 On the front side of the coaster they are continuing to enclose the ‘raptor enclosure’, including the first turn into the pre-launch. 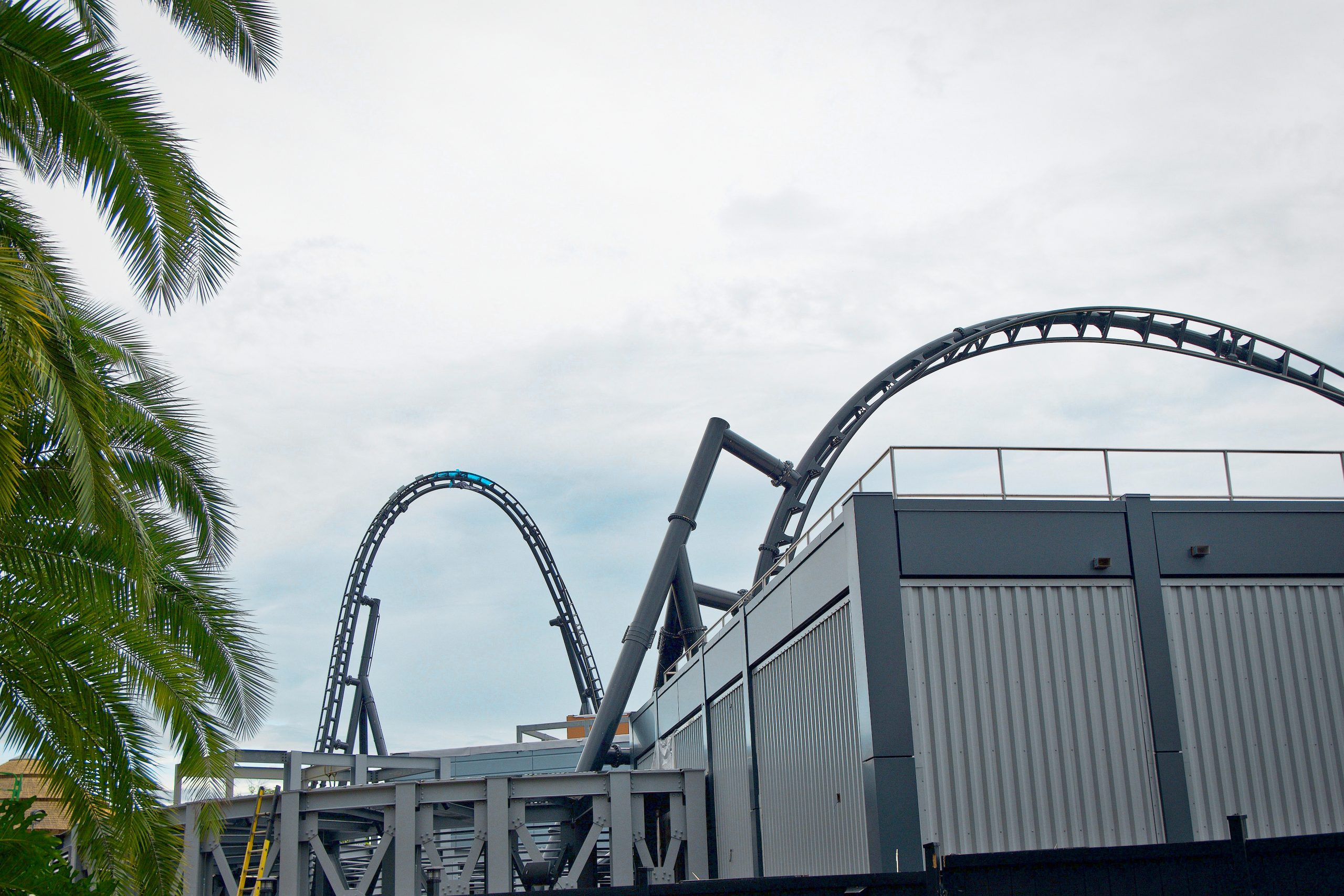 It may be a bit challenging to see, but the tunnel is now partially enclosed: 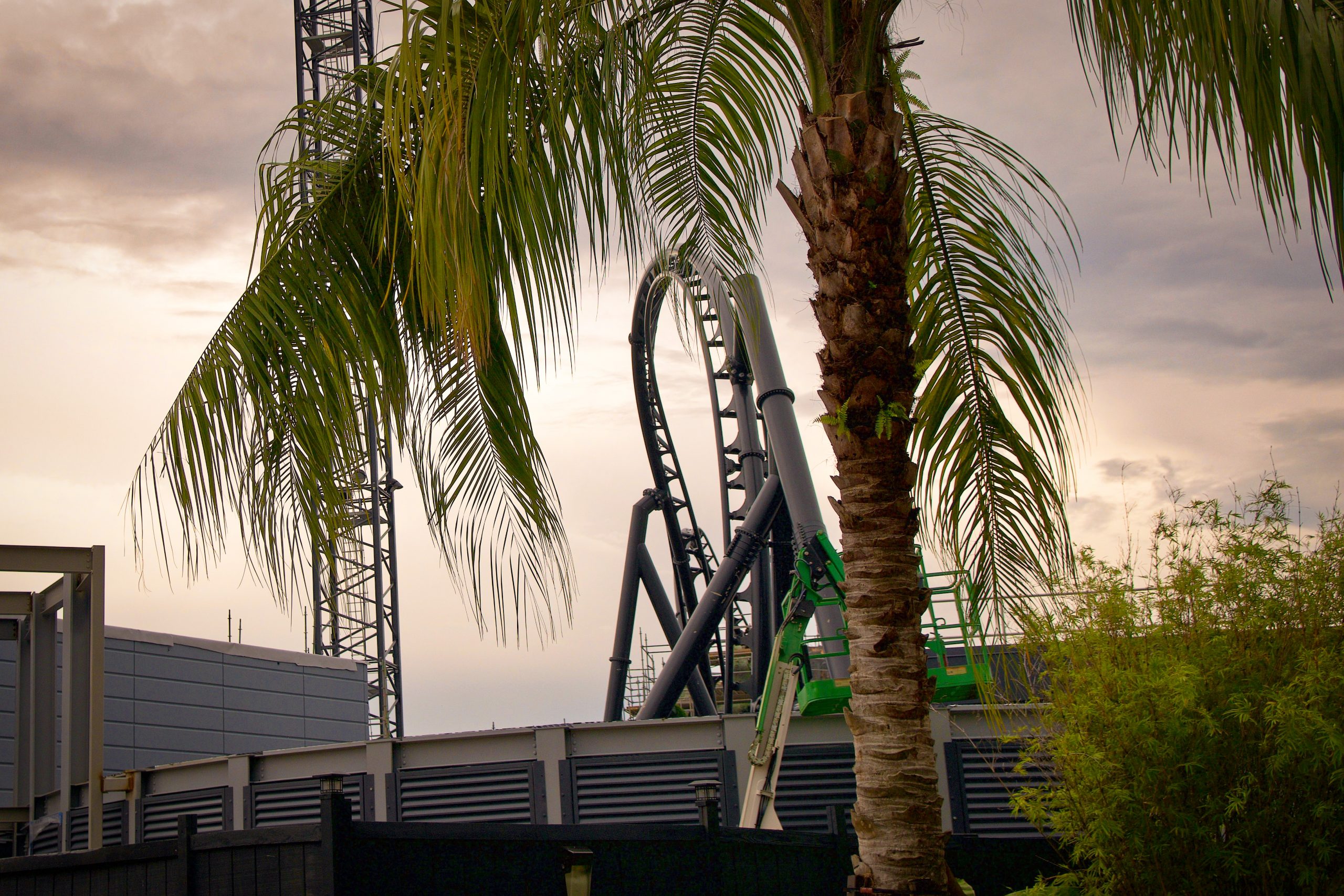 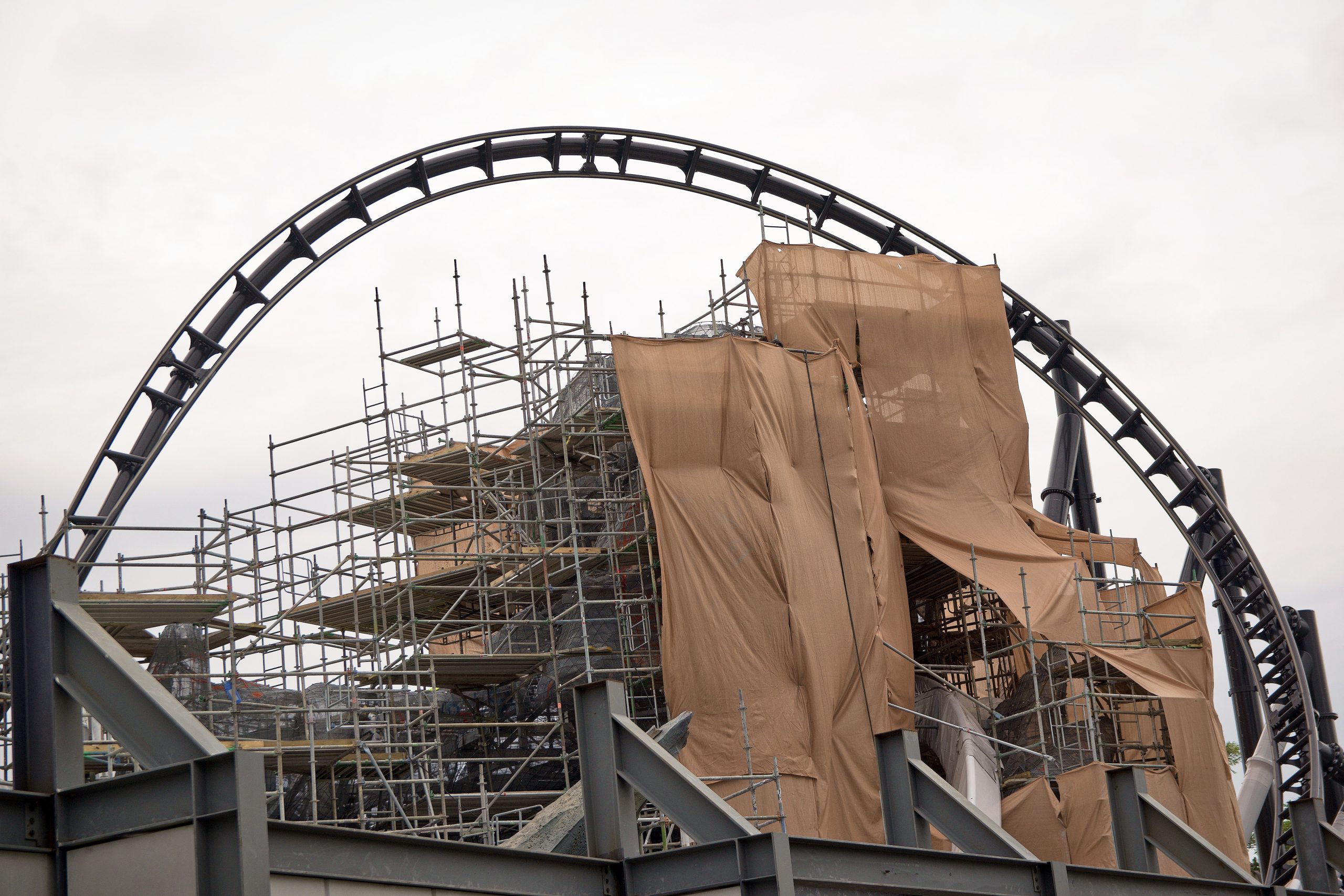 Hard to really see day-to-day additions of details behind the scaffolding, but at least we have this good looking track to stare at: 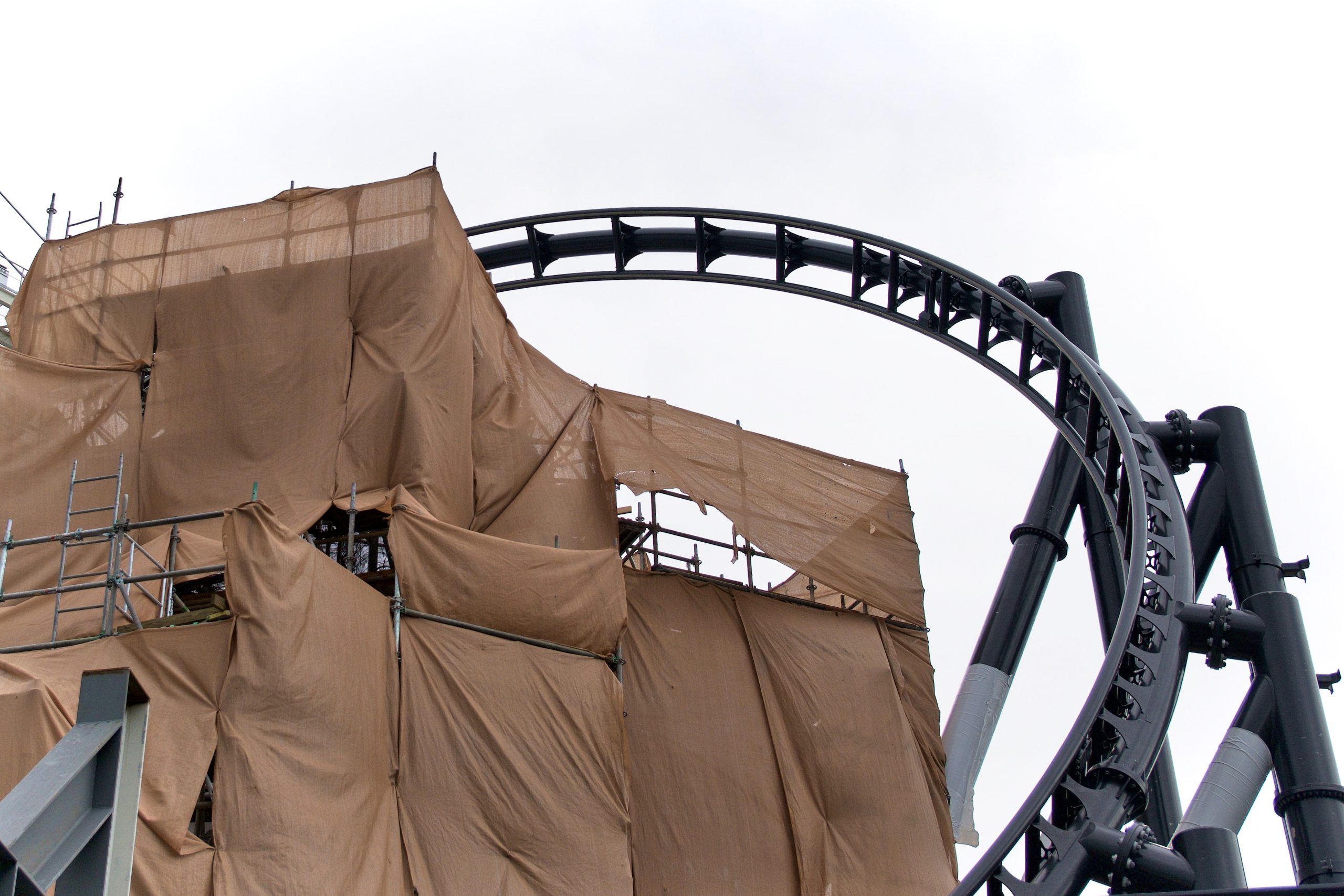 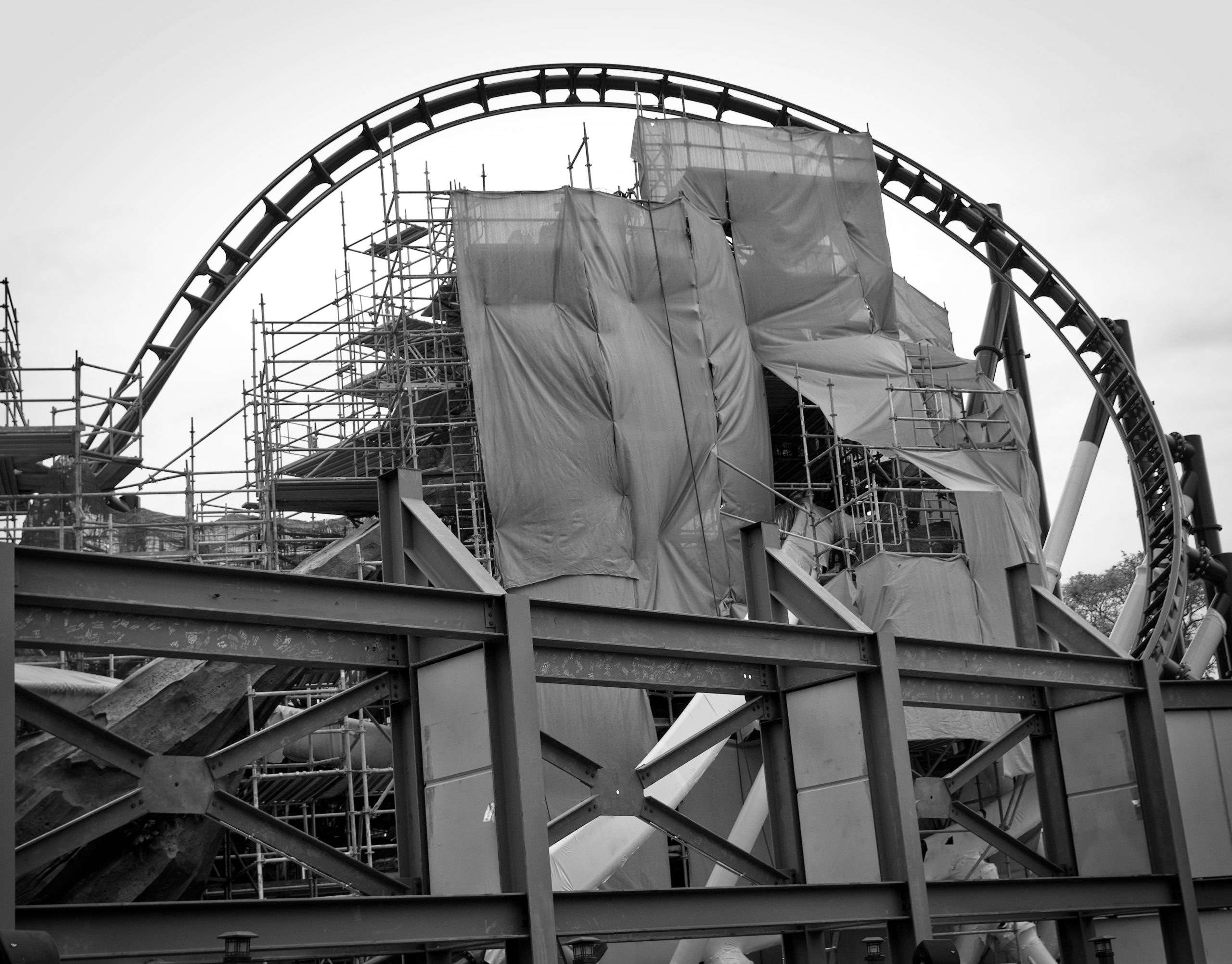 Interestingly, some parts of the walls were filled in with concrete weeks ago, and some are still open. I hope this becomes some sort of visual portal for the midway. 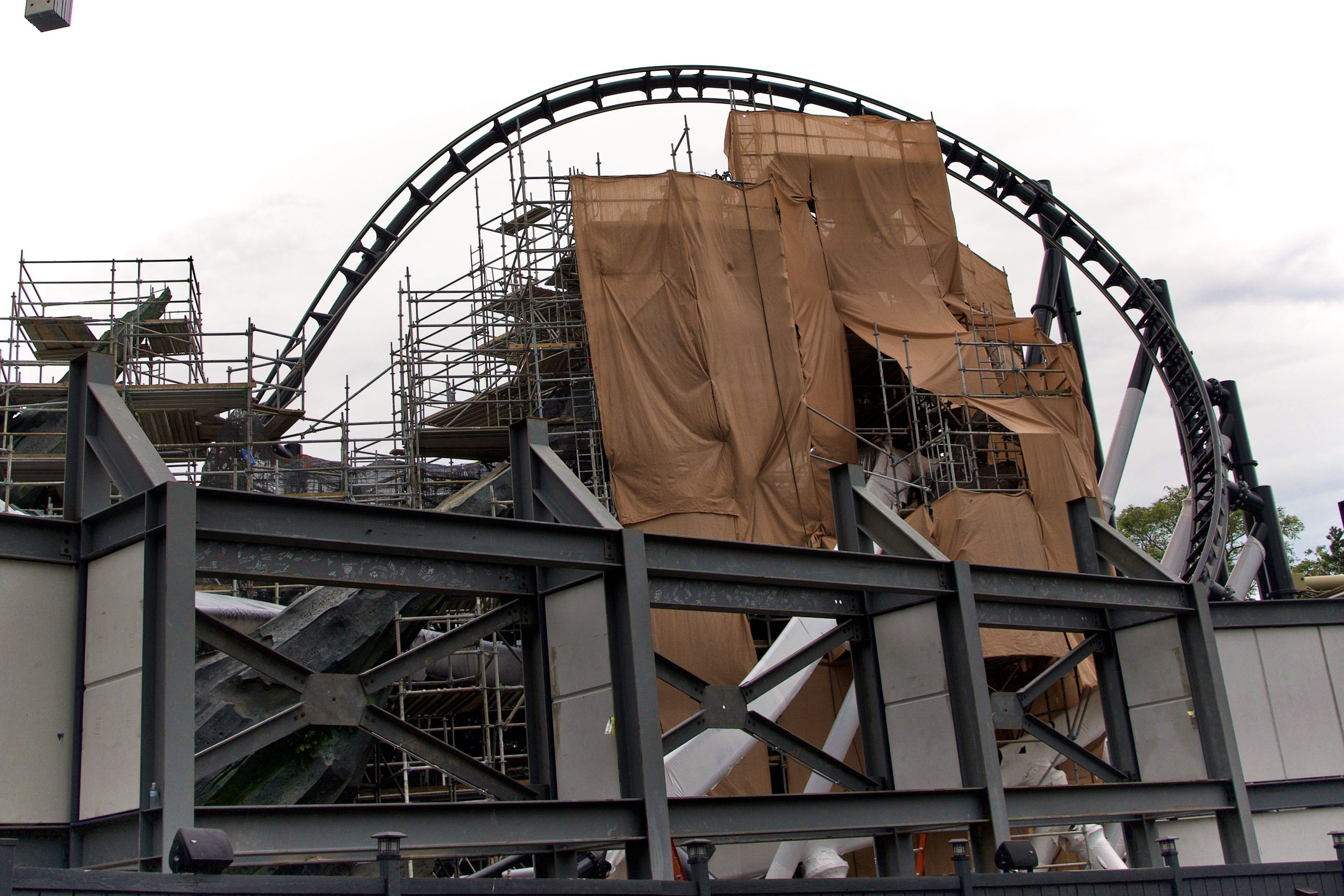 And it’s not just rock work that’s going in; lots of additional details and theming as well! 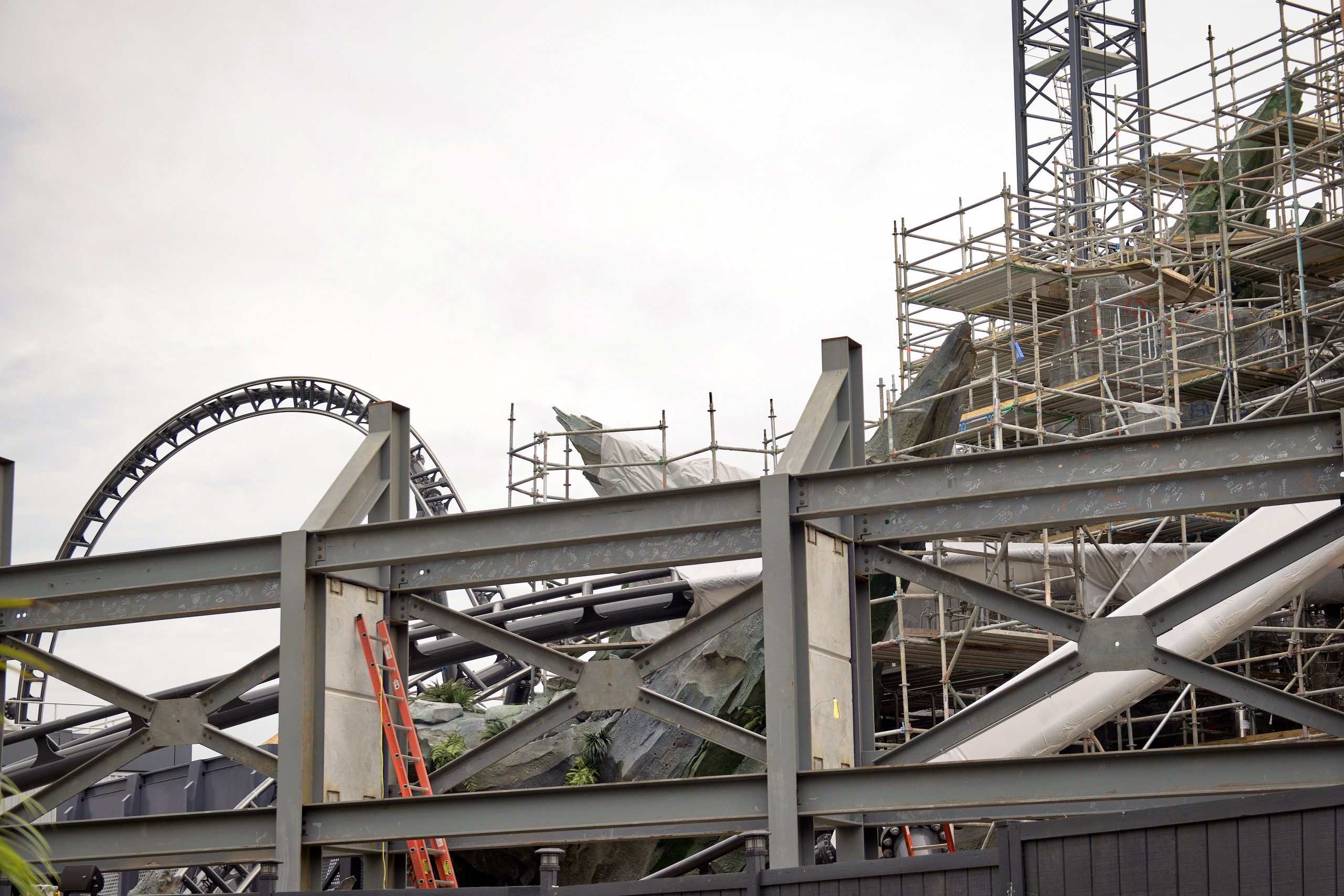 If you want a great viewing point, the midway by the water behind Mythos is a great spot: 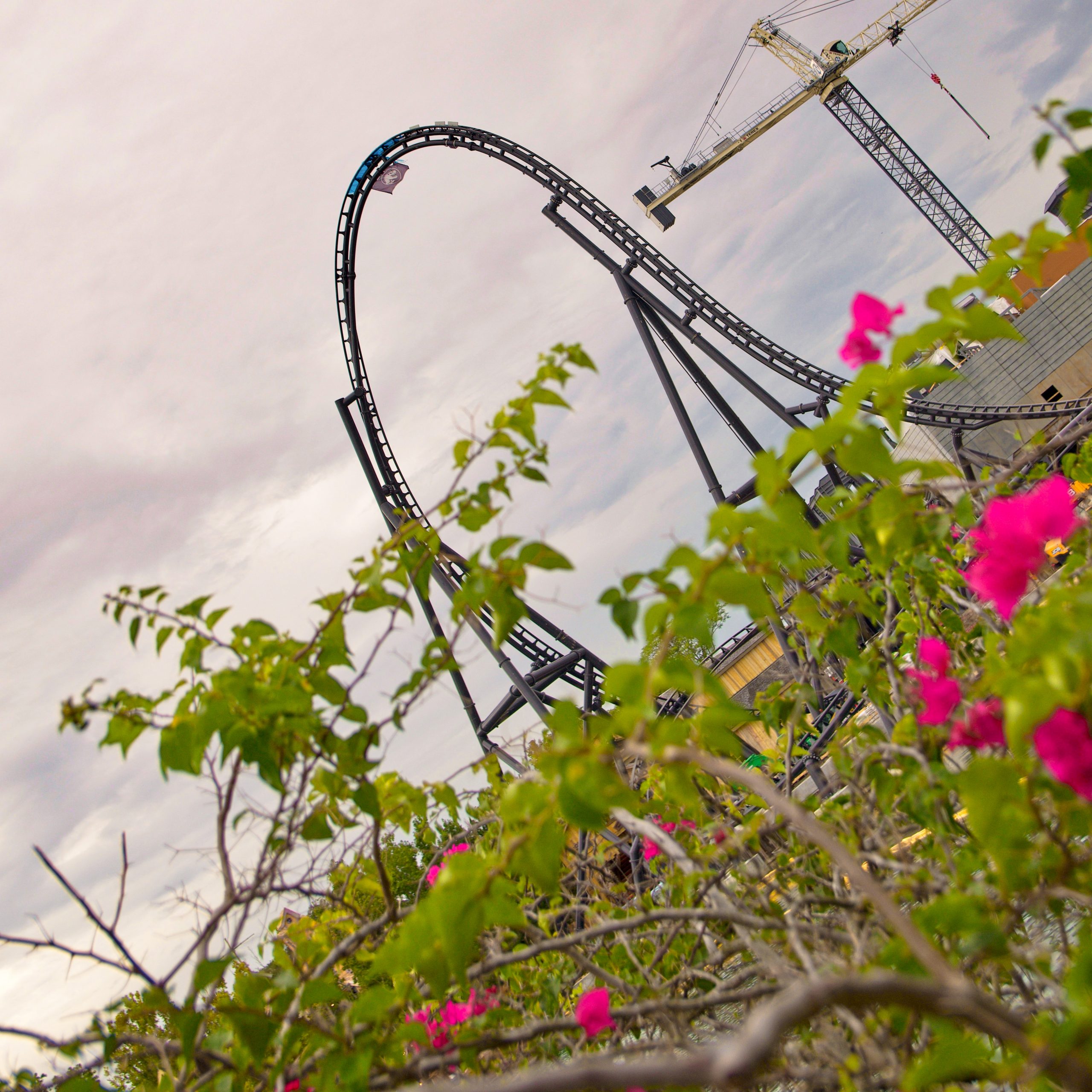 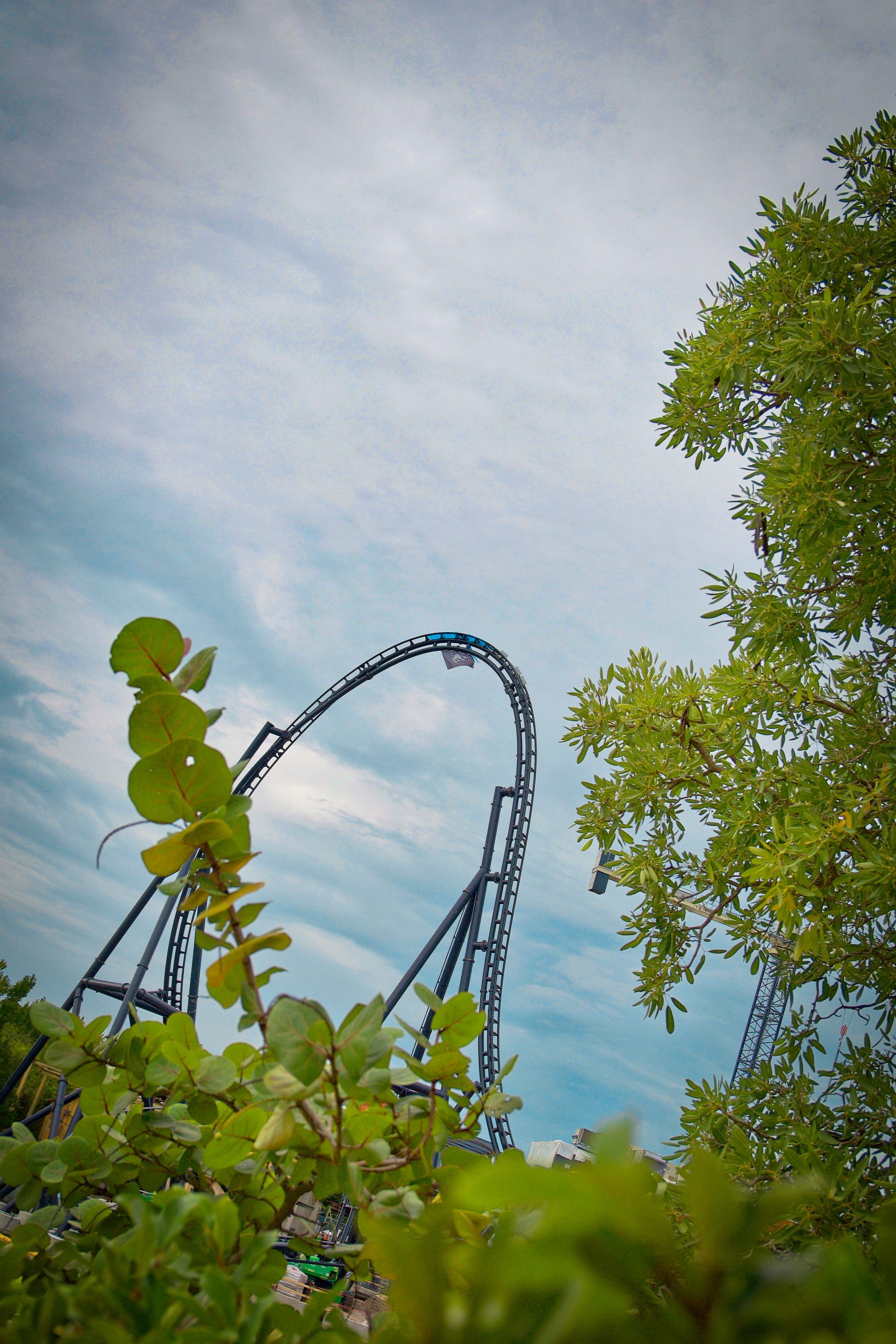 I wonder how much netting will be added here, because we all know there is no way that guests will be able to walk that close underneath these elements without nets to catch loose articles. 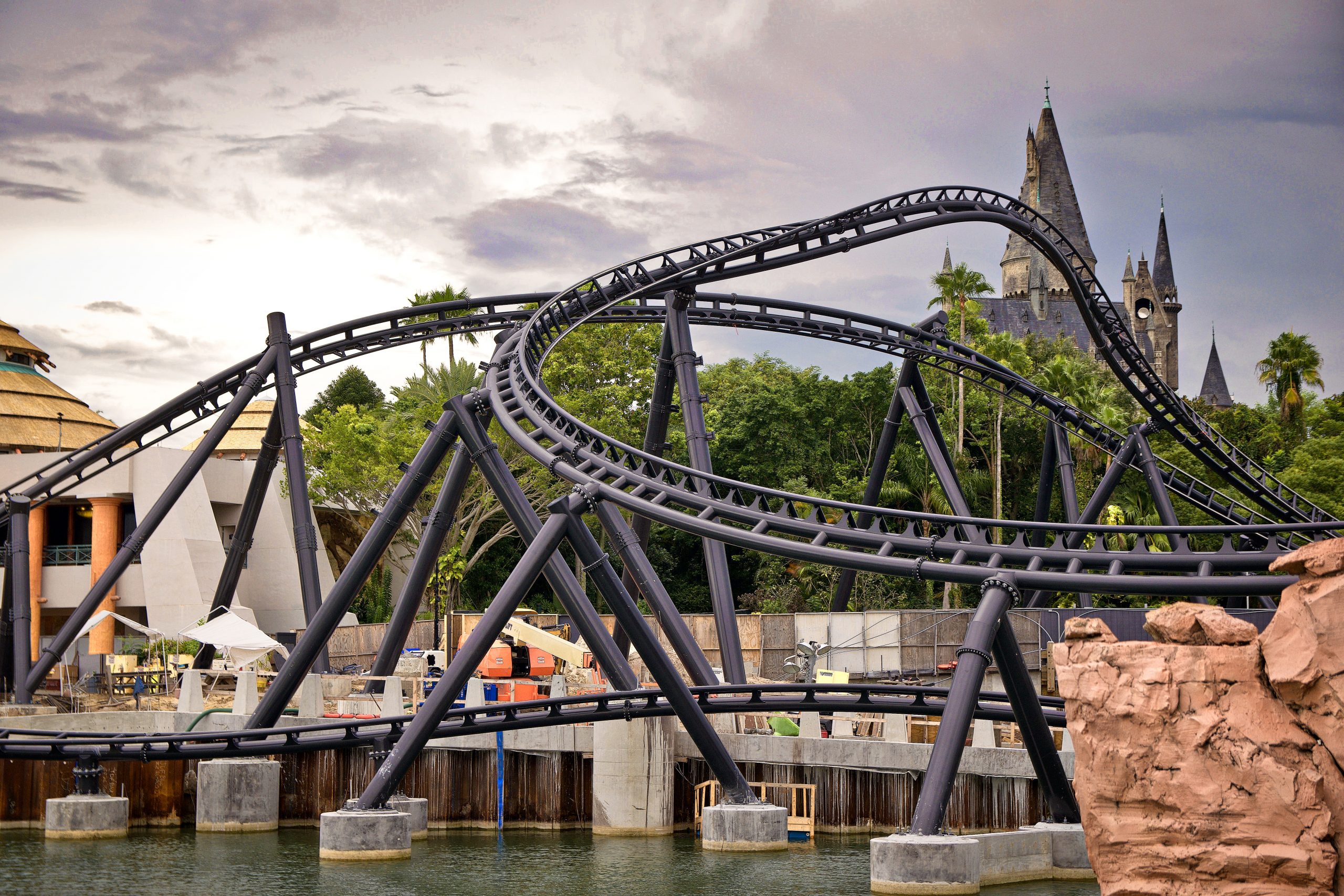 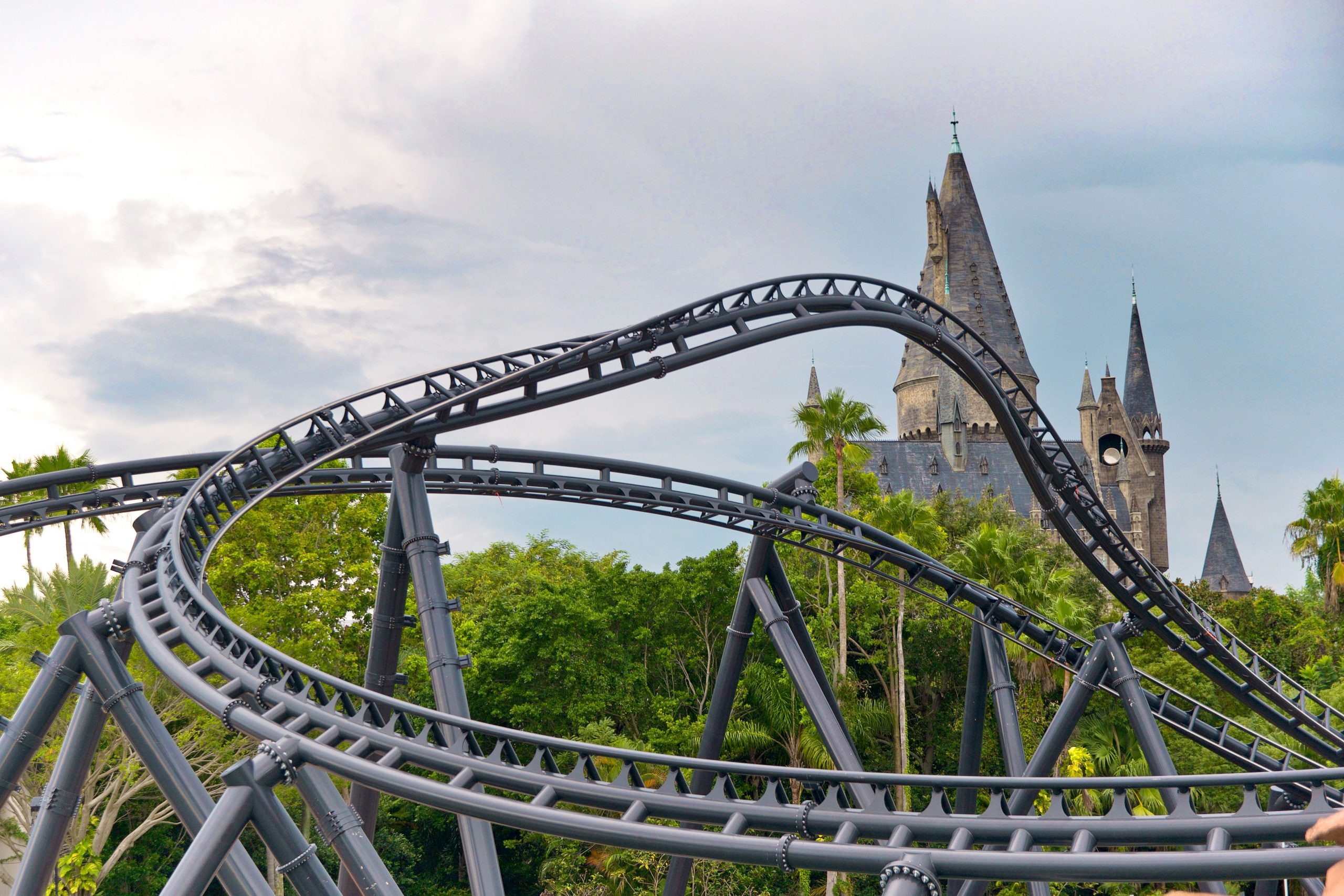 Join us on PAGE 2 for a big collection of shots taken from the newly accessible bridge between the Lost Continent and Jurassic Park!