Even though we are the Coaster Kings, we like to talk about other theme park related things from time to time. Today I wanted to talk about what is one of the most well-known attractions in the world. It’s called Talocan– and it’s located in Phantasialand in Brühl, Germany.

The social media response to Talocan is beyond overwhelming. Even many people who aren’t theme park enthusiasts will have seen this unique and delirious attraction on Youtube, Instagram or Facebook. But what is it that we think makes Talocan so atmospheric?

As soon as you walk in through the entrance archway, the loud and thumping boarding music will send shivers down your spine. Skulls embedded into the rock work surrounding the ride build up tension and suspense as riders are loaded onto the next cycle. Tlaloc, the Aztec God of rain, clouds and storms awaits as new victims board, ready to take on the challenge he sets out for them. Tlaloc sits menacingly as the centerpiece of the attraction as mist is slowly emitted from beneath him. 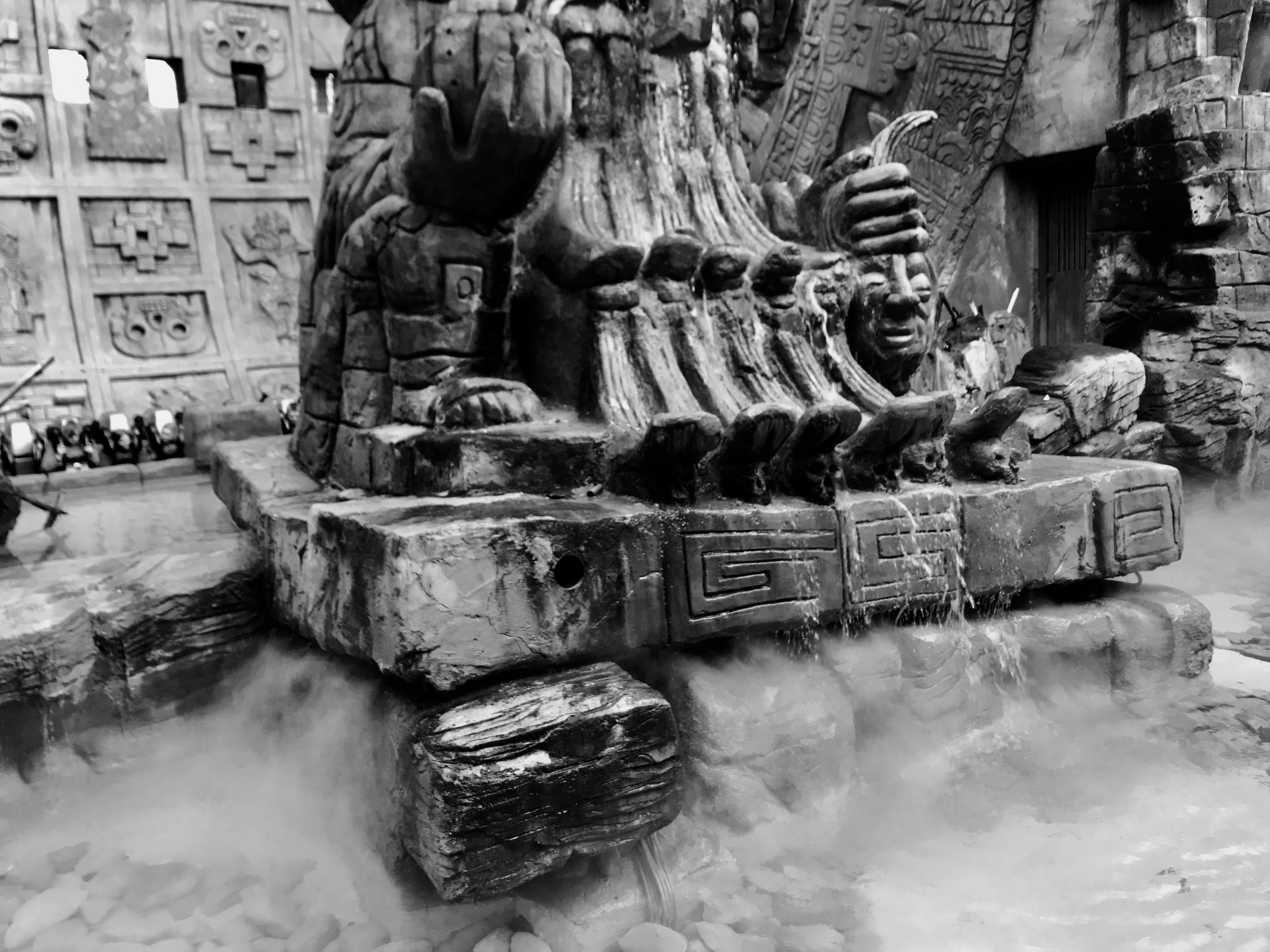 Once all of Tlaloc’s victims are boarded onto the ride, the thundering music slowly fades to silence… The Aztec God then gives a menacing speech to the victims about the furious challenge they are about to undergo in Talocan’s lair. The platform slowly lowers beneath the riders. The spectators watch eagerly to see what this intimidating contraption is about to do next. Now is the appropriate time for riders to hold on in fear of what is about to come.

The first maneuvers the ride undertakes are quite slow, but build up suspense as the dramatic Imascore soundtrack comes to life. Tlaloc uses this opportunity to unleash his first power. The power of water. Synchronized water fountains abruptly emerge from the pool beneath and head straight up towards the riders, trying to catch their legs. The start of the ride is the only time Talocan tries to get its riders wet. Those with long legs on the back row will be in for a surprise as the water fountains splash their legs and feet. 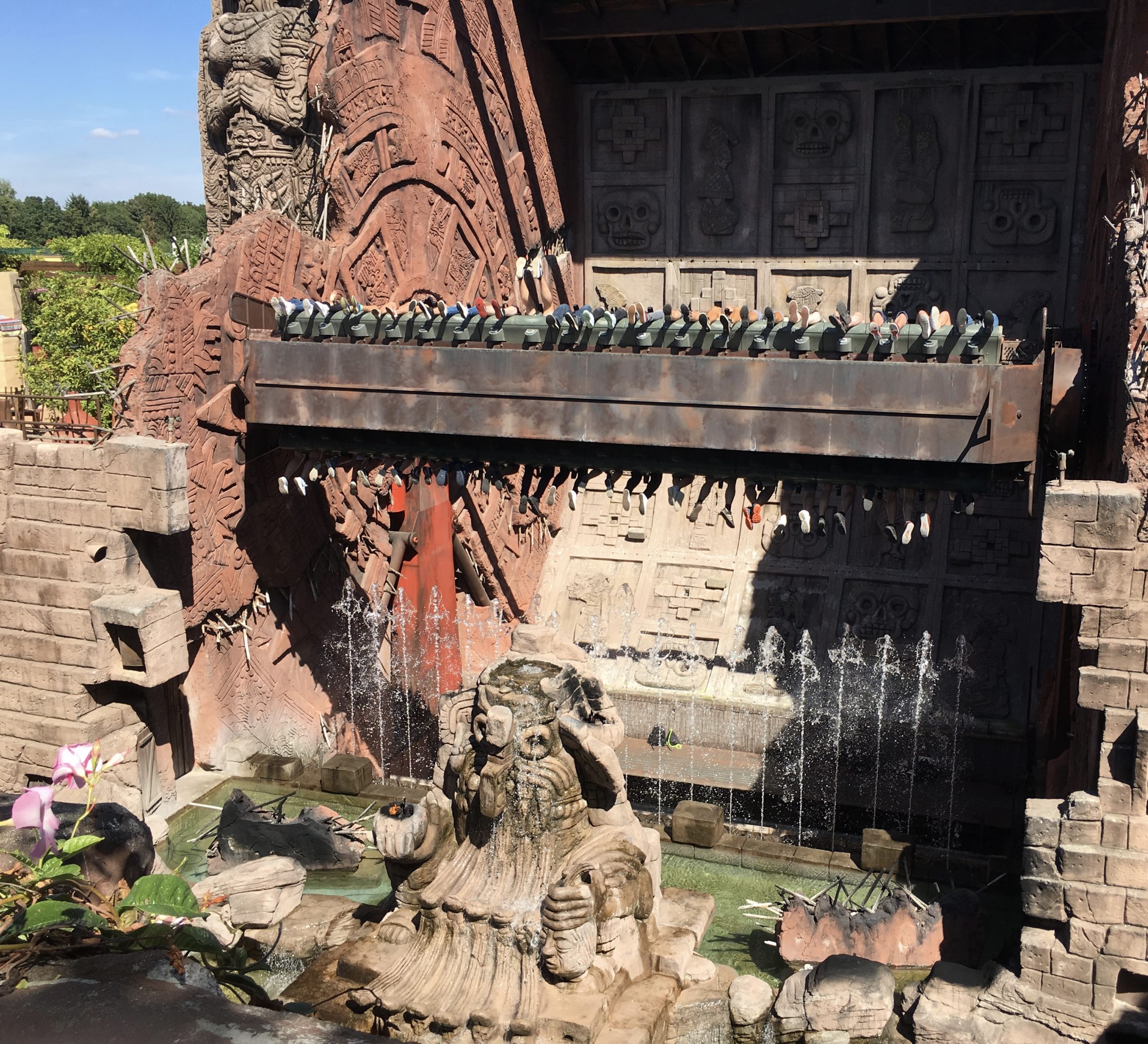 The gondola is then released for the first time and you will swing gently as Talocan elevates you to its highest point of the ride. This gives you a view over towards the viewing platform and from Mexico into Africa. This gives Tlaloc the opportunity to unleash his next power. The power of fire. Tlaloc emits a sudden and sharp burst of fire, intimidating spectators and riders alike. 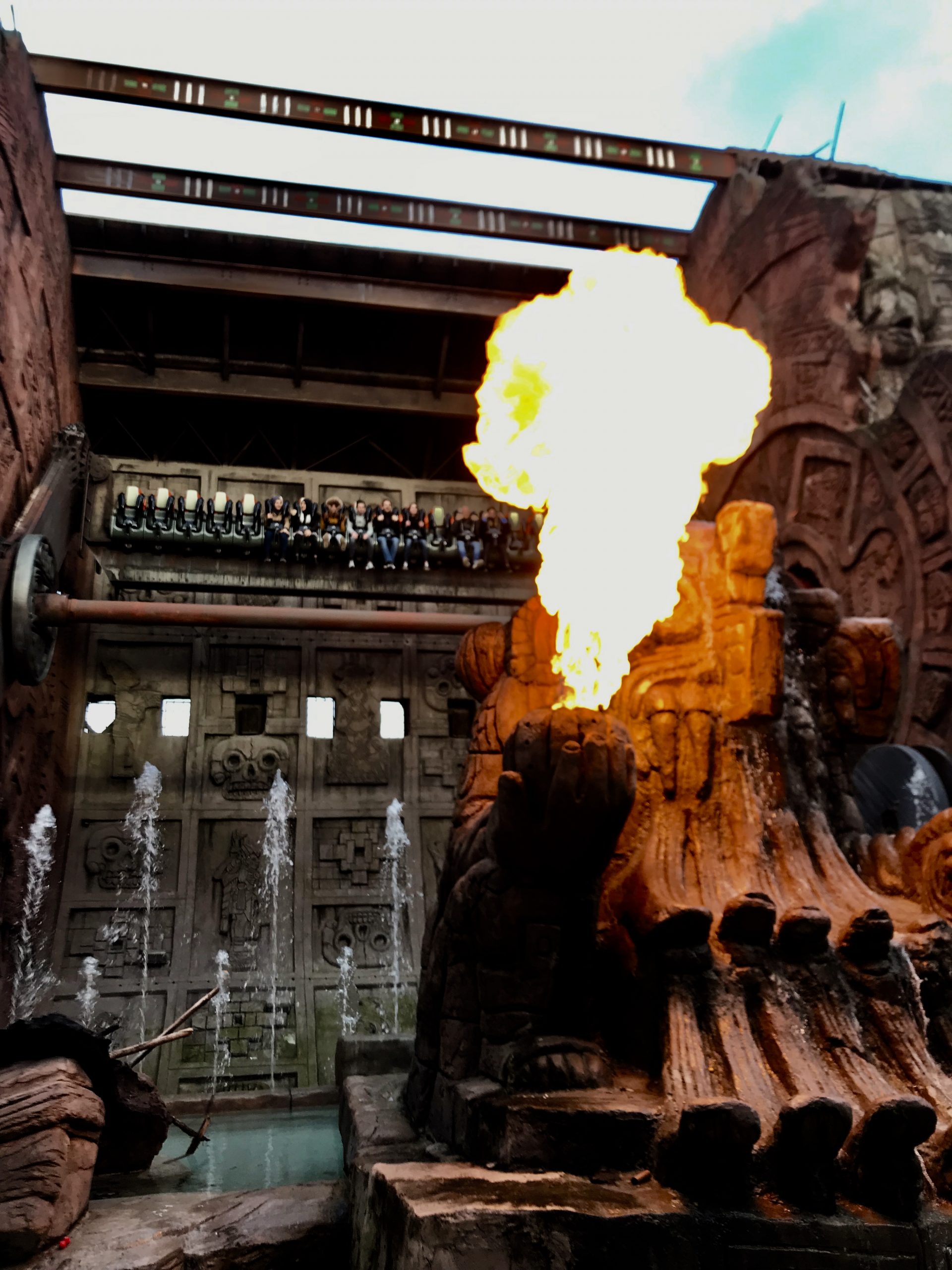 With suspense building, the gondola locks into position and Talocan slowly inverts its riders, maneuvering them towards the looming water fountains. The water fountains plummet back down the ground as Talocan hangs its riders upside down. The brake is then released and the gondola completes its first series of rollovers. Three successive loops, in perfect timing with blasting fire effects produced by Tlaloc. 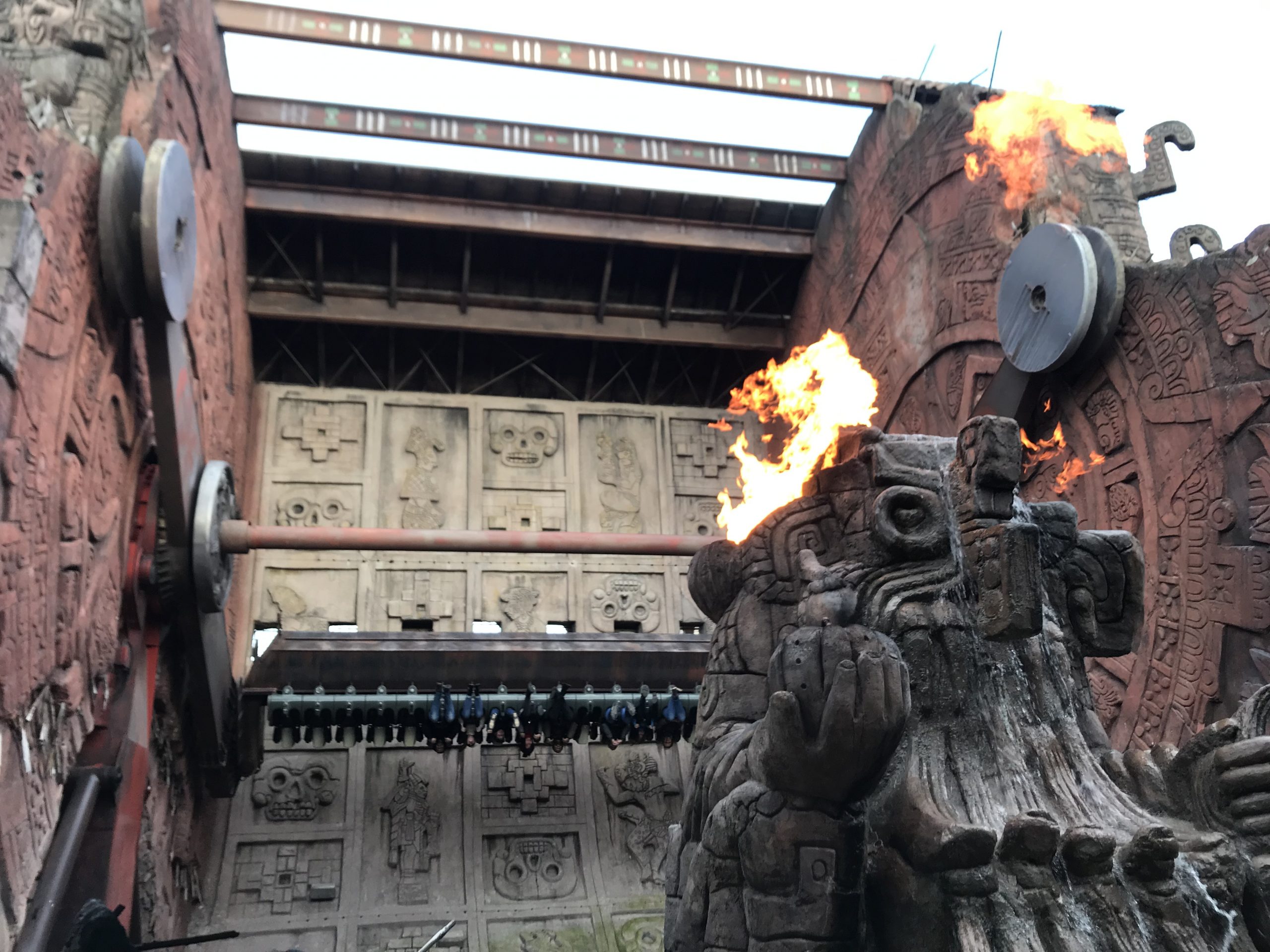 Talocan then takes its riders back to the top before locking the gondola into position and preparing its riders for a second, even more ferocious set of rollovers. 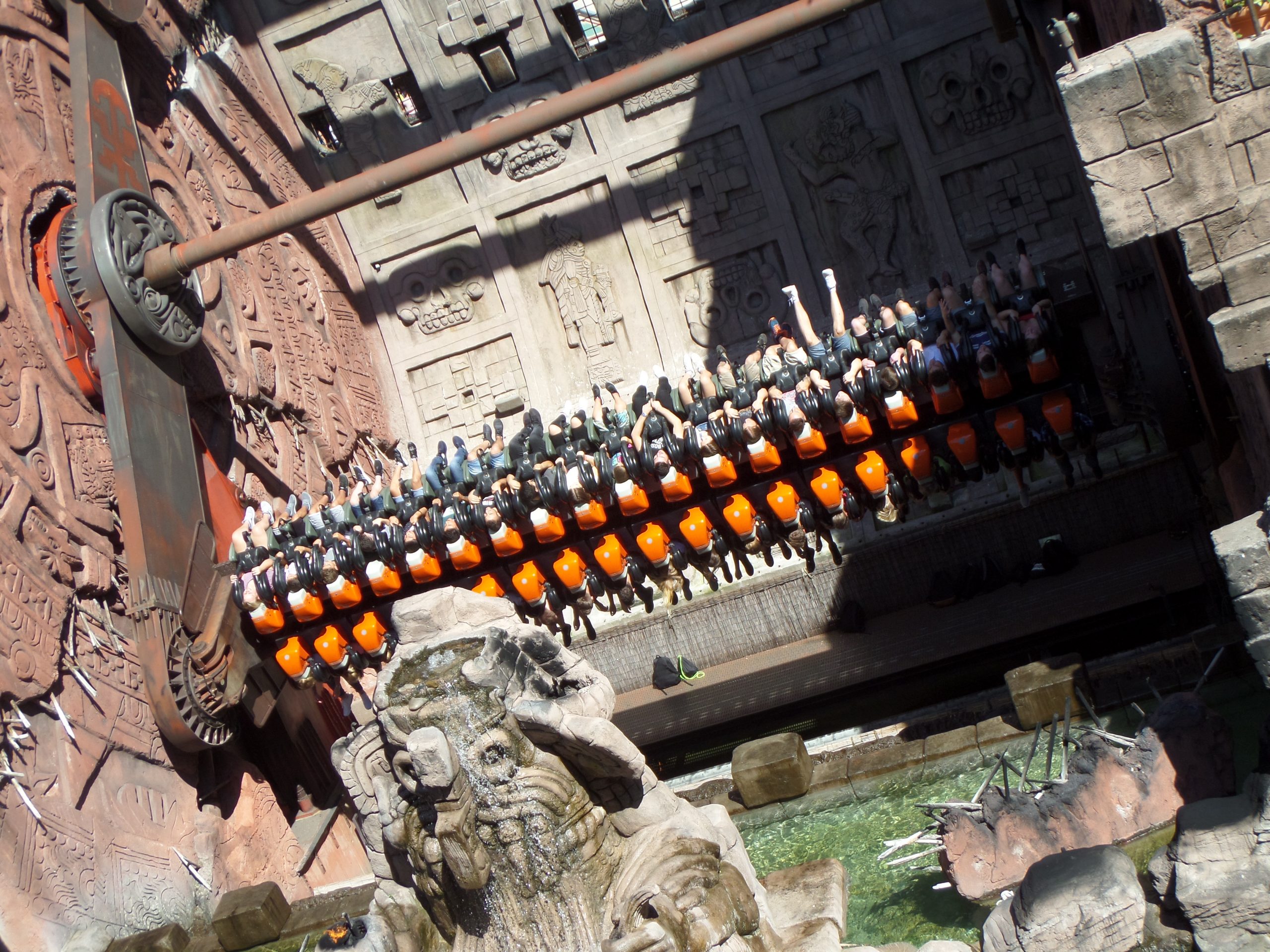 The second set of rollovers is accompanied by perfectly timed fire effects. Each time the gondola flips it picks up more and more momentum, leading to a dizzying effect. Four rollovers in and the gondola has picked up so much force and momentum you won’t know which way is up. The gondola then plummets riders head first towards the ground and then dramatically swings riders into the rock work cavern behind, giving the illusion they are about to hit the wall. 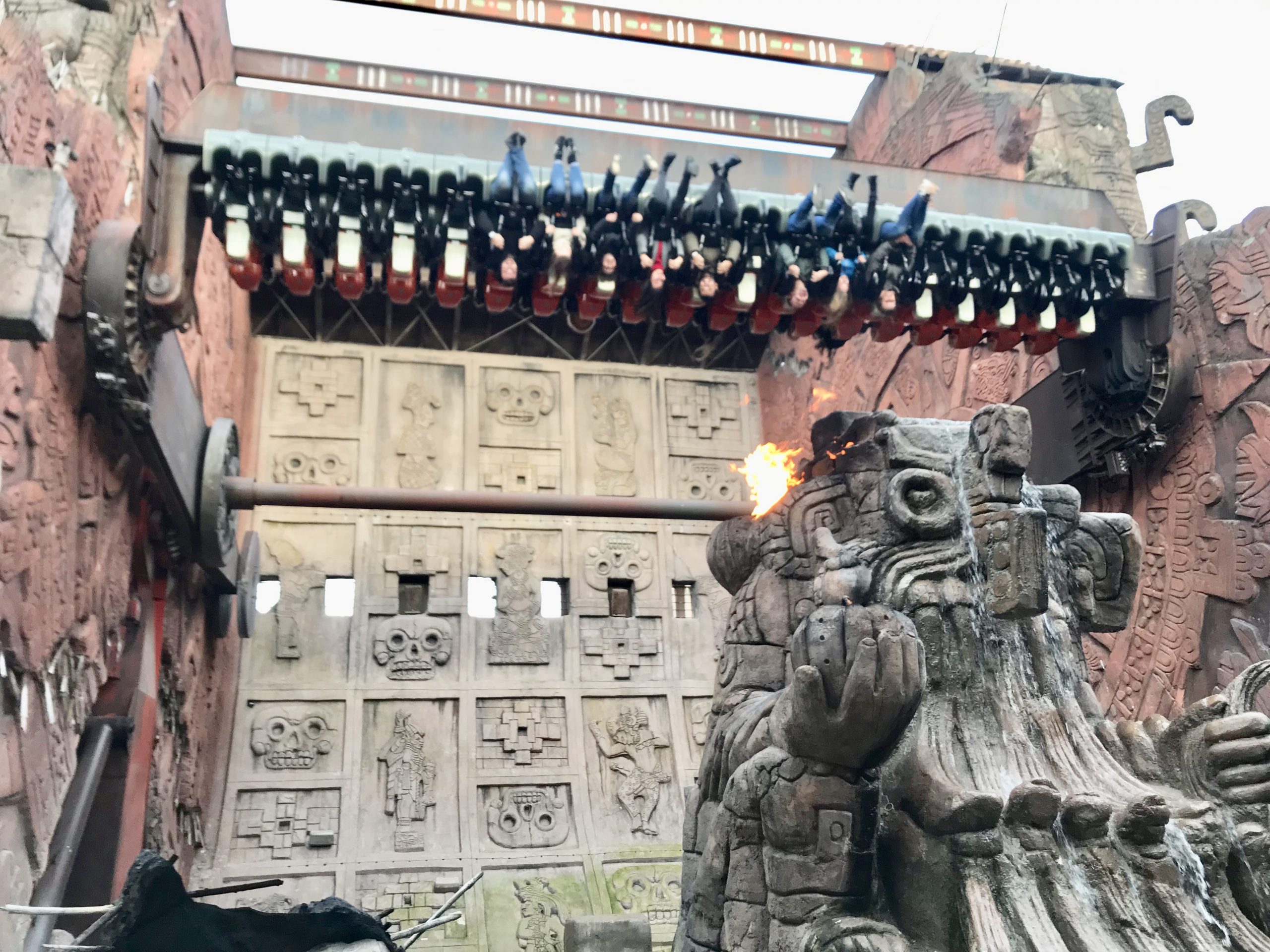 The music then changes into a slightly more upbeat, Chiapas-style theme as Talocan takes its riders back to the top point. The water fountains dance in time to the music as more dramatic fire effects go off. 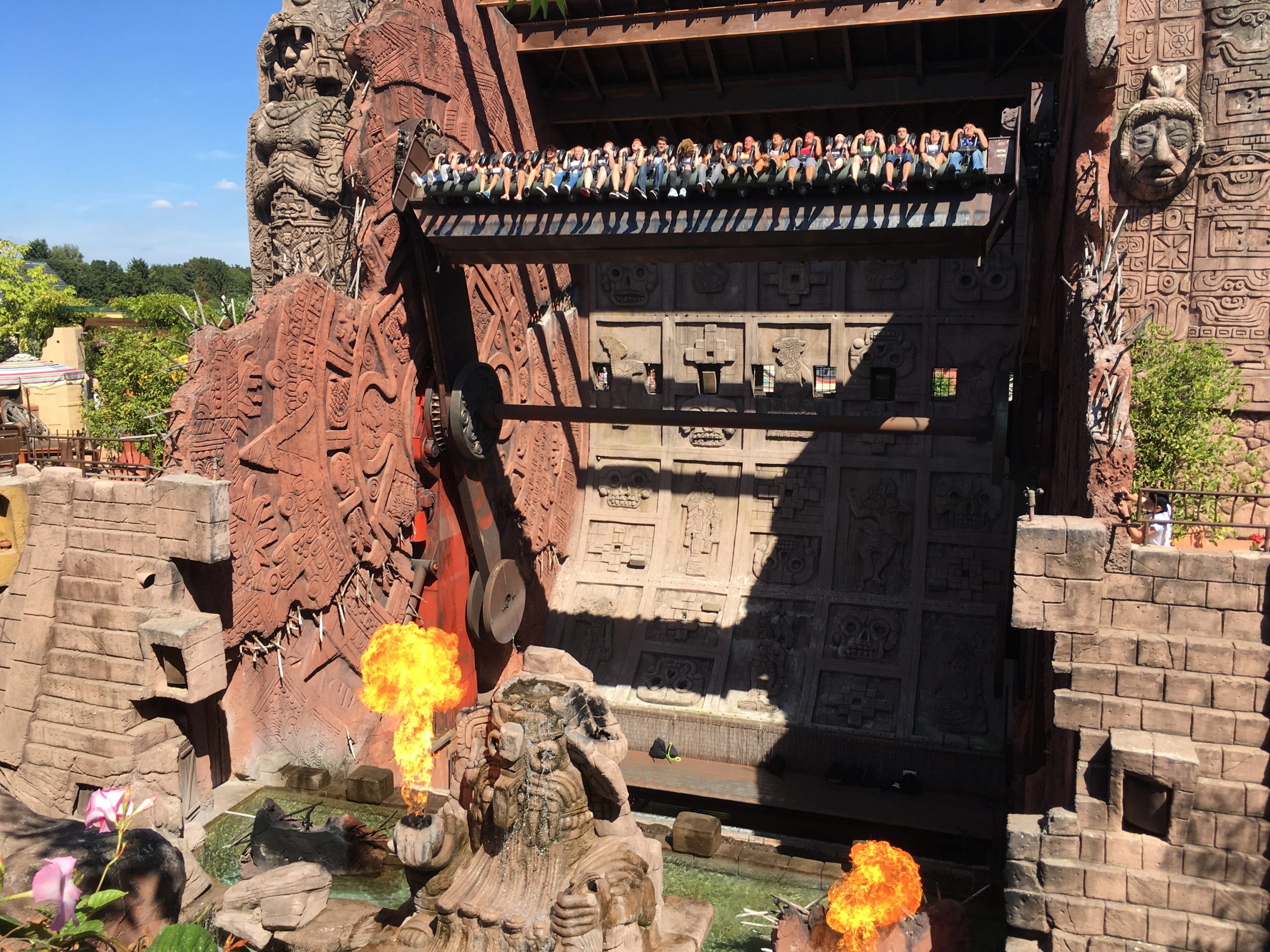 Talocan then takes its riders for one more inverted loop chasing the water fountains as they move up and down. The gondola then releases and riders are taken back to the parking position where the music reaches a dramatic climax and the fire effects go off fiercely again for the last time. 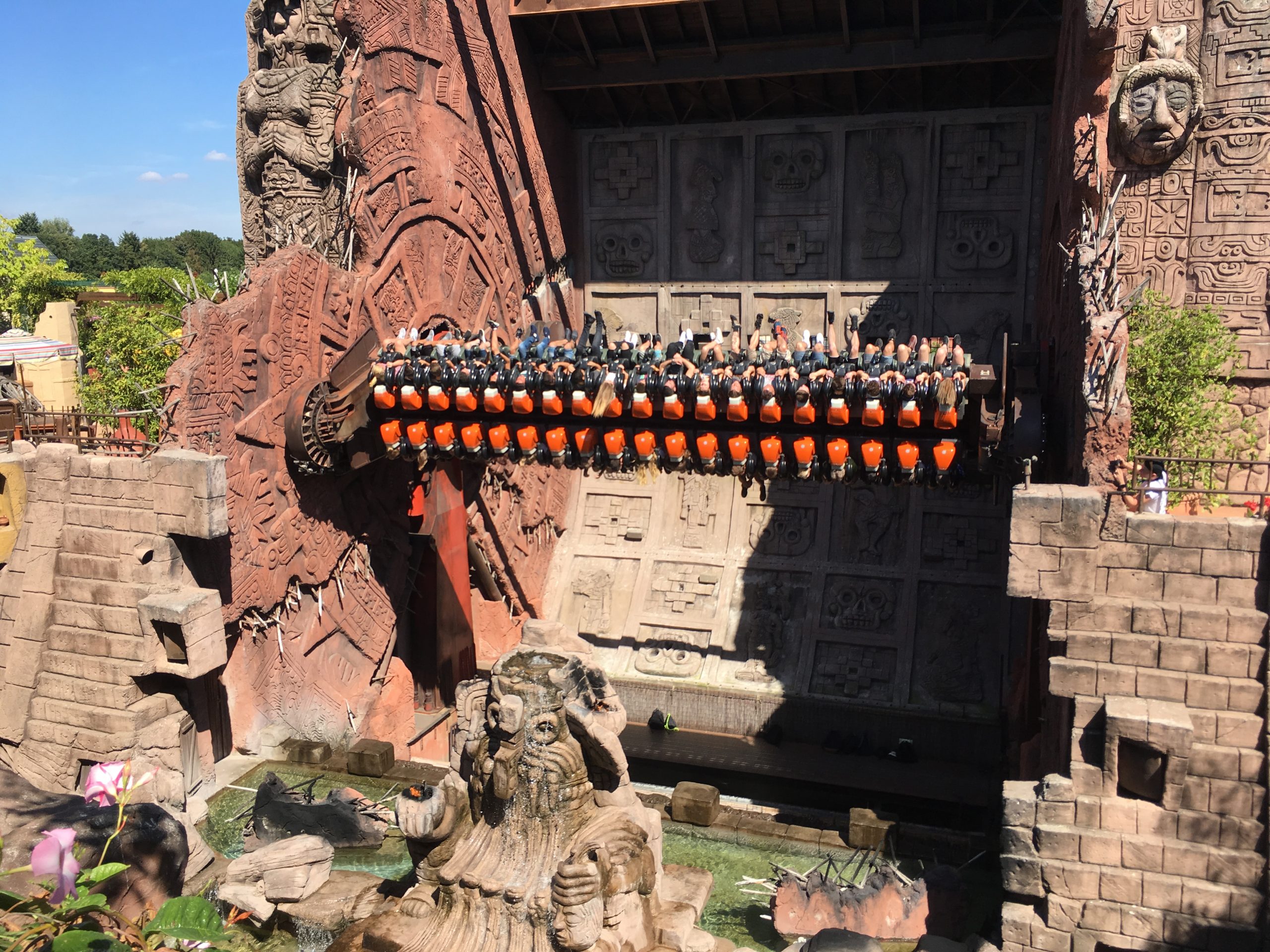 We also think Talocan looks incredible at night time. The aztec foundations are dimly lit with subtle yellow lighting which builds up tension and atmosphere. Mist pumped out from the rock work creates suspense as riders wait for their turn. However, most of all, as the ride completes its cycle, the fire effects illuminate the perilous rock work structure and create a majestic show for spectators on the viewing platform above. Talocan is truly one of the most impressive rides in the world at night time, for both spectators and for those who want to take on the challenge. 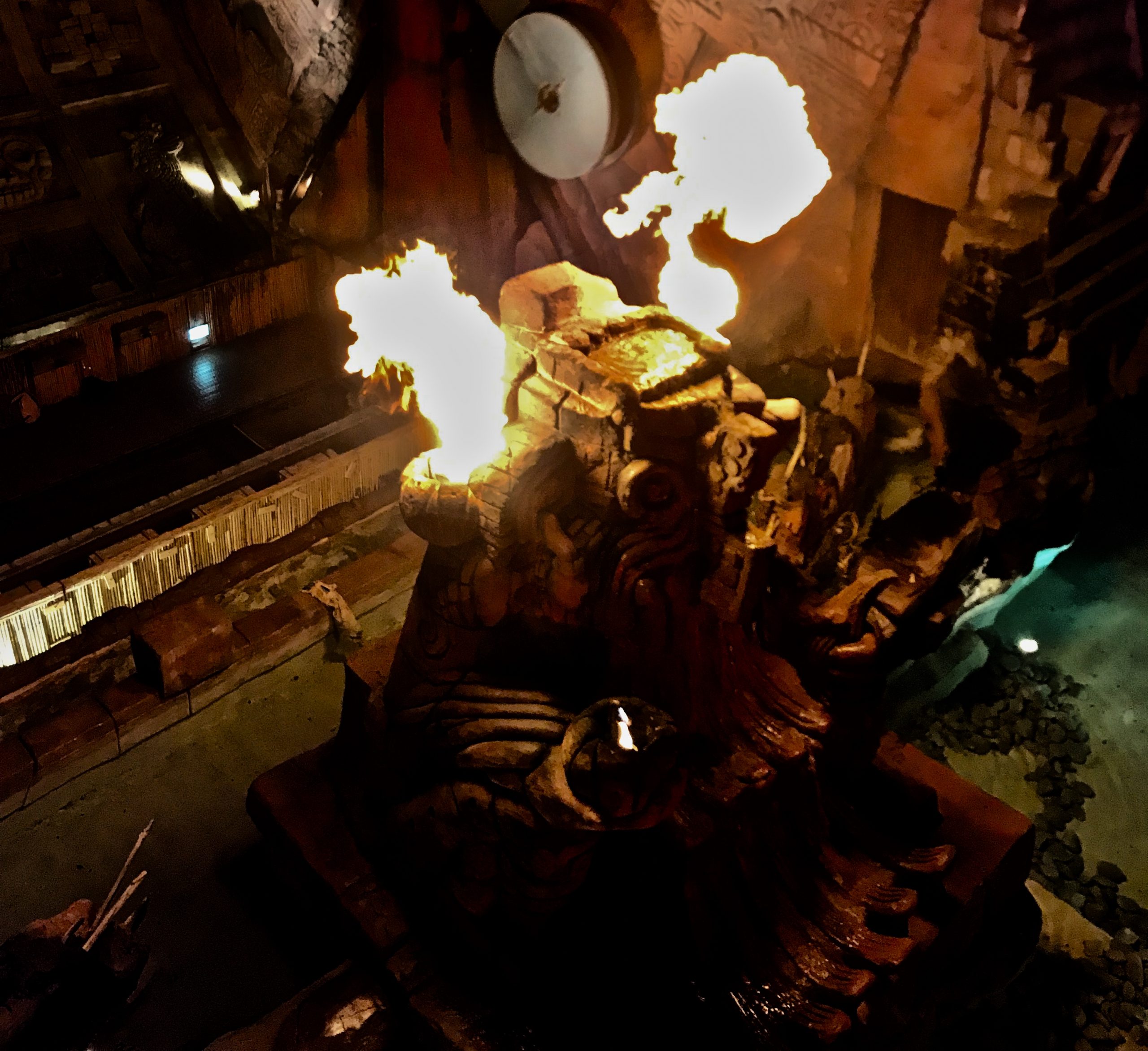 So… to answer the question I set out at the beginning of the article; Is Talocan the best flat ride in the world? Had I been asked this question a year ago, I would have hands down said yes. However, like any other ride or rollercoaster, Talocan can, and has faced numerous technical issues. Over the last year, Talocan has faced many technical problems which has arguably led to the degeneration of the ride experience. In early 2019, Talocan started to undergo a major refurbishment procedure. All of the rides restraints were replaced and refitted to shiny new ones. This was definitely an investment which needed to happen, as the old restraints were wearing thin and the ride had reached its 13th birthday since first opening.

This refurbishment then continued in the closed period between the summer and the winter season. The park’s maintenance team deemed the old control box necessary to be removed and replaced with a brand new replacement from Huss. On paper, I would favor this replacement. Any investment to keep one of the most mind-blowing experiences in the world running is an investment worth making. But the replacement of the control box meant that the ride program, which has been used for so many years now, has been lost.

A brand new control panel means a brand new ride cycle needs to be programmed. For the start of Wintertraum in November 2019, the park brought Huss in to program a temporary ride cycle. This cycle featured an underwhelming number of roll-overs, compared to the successive and intense rollovers Talocan used to achieve. Furthermore, the new ride cycle barely utilized its water and fire effects to the full potential and was completely unsynchronized with the music.

In January 2020, Talocan was yet again reprogrammed. This aligned with my visit to the park’s stunningly beautiful winter event called “Wintertraum”. I rode Talocan on this brand new ride cycle and it was the most brutal and intense ride I had ever experienced on this mental contraption. The fire effects were blazing brighter and fiercer than ever before and the ride was managing insane amounts of successive roll-overs. 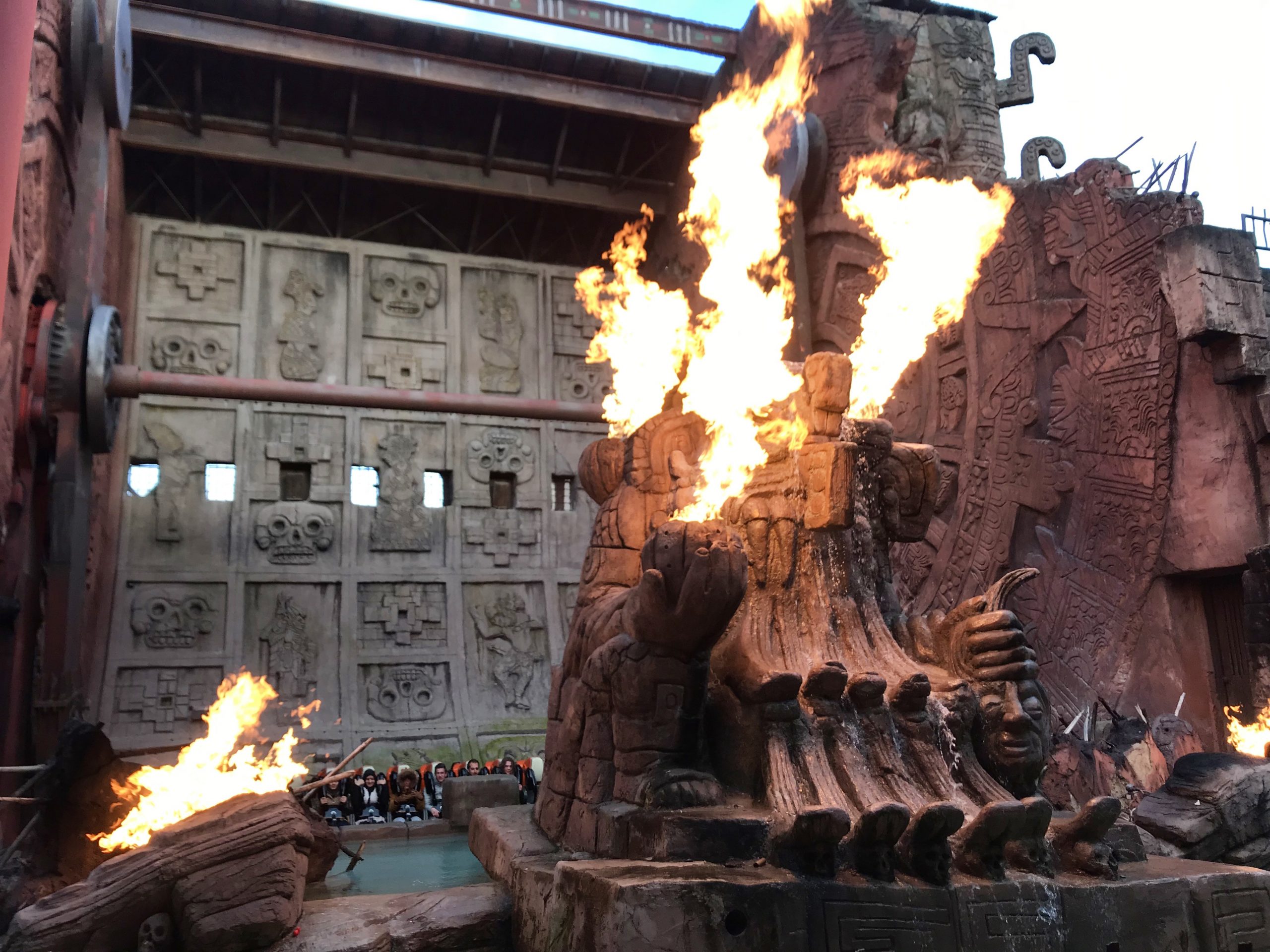 But there was still something missing for me. The new program was out of time with the beautifully composed soundtrack and the water fountains were still lacking; unsynchronized and not being used to their full potential throughout the cycle. I was still missing the old Talocan experience that gave me the chills every single time I rode this incredible attraction.

Fast forward to May 2020, post corona-lockdown in Germany and the theme parks were given the green light to reopen in North-Rhein Westphalia. We discovered that during lockdown the whole Talocan gondola actually had to be removed via crane and shipped off to the Huss factory for repairs. Upon return of the gondola, many Talocan fans expected the ride to be restored to its former cycle. The park reopened at the end of May and Talocan immediately experienced significant problems. From the brakes not unlocking to release the gondola so it can roll-over to the emergency brakes activating during the ride. The ride experienced several days of downtime at the beginning of the 2020 season.

The ride is now operating with minimal downtime but the experience is completely different to what it used to be a year ago, and even different to January. It is actually operating on the same cycle as in January, but during the first set of roll-overs, the brake releases the gondola late meaning that the gondola is unsuccessful at managing any flips. This then leads to the sensors getting confused which randomly triggers the fire effects and leads to the effects and music being completely out of time for the rest of the cycle. This leads to the music finishing significantly before the end of the ride so the last portion of the ride is completed in silence.

Despite all of this, Talocan still remains one of the most detailed, well-themed and intimidating flat rides in the world. The atmosphere created by the ride and the staff is absolutely phenomenal and incredibly immersive. I certainly hope that Phantasialand have it in them to keep investing in Talocan and try to restore it back to its former glory.