Nick: I absolutely love Halloween, so it should be no surprise that Fall is my favorite time of year here in Orlando. All the major theme parks offer excellent Halloween events, but my favorite has to be Halloween Horror Nights at Universal Orlando. I’ve attended the event several times already this year, so I figured it was time to share my thoughts on this year’s haunted houses and scarezones – read on for the full review!

Now in its 28th year, Halloween Horror Nights has grown tremendously over the past decade, becoming the nation’s premiere Halloween event. This year features ten haunted houses (more than ever before!) and five scarezones. Over the past few years the event has been bringing in more and more big name horror movie and TV shows. This year the most popular properties are Stranger Things, Poltergeist and Halloween 4, but of course they have seven more excellent houses to choose from, including five original houses created specifically for the event!

Ranking the houses this year was a bit more difficult than I thought. I can easily pick my favorite three houses, but after that, they’re all pretty much equally amazing, so I felt like I was being really nit-picky when choosing the order of houses 4-10. Anyway, without further ado, below are my house rankings for Halloween Horror Nights 28! 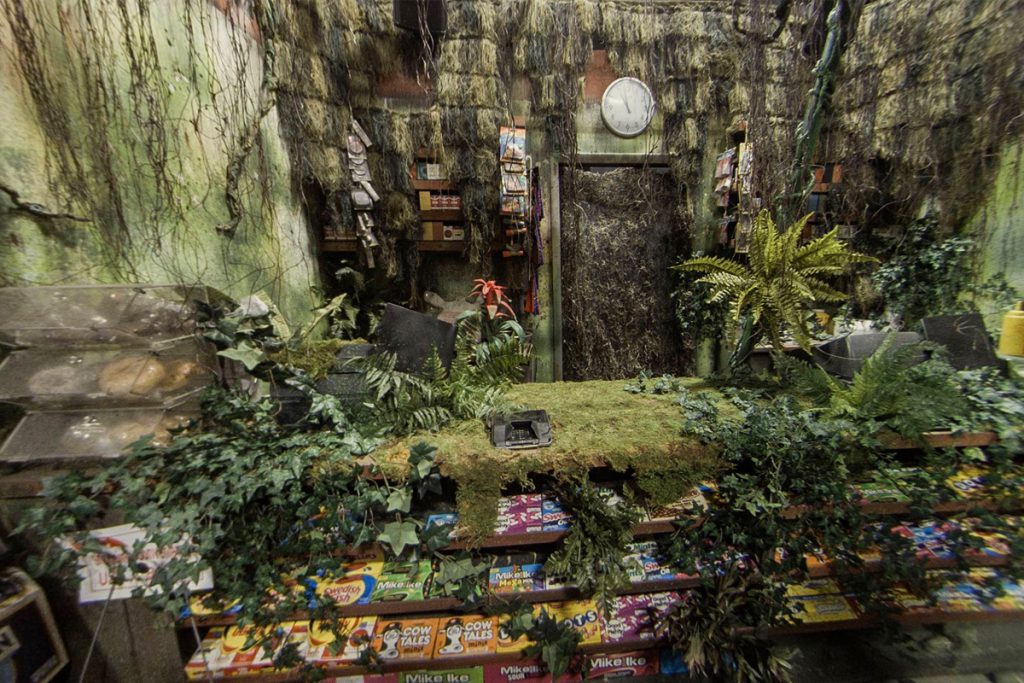 1.) Poltergeist – This is easily my favorite this year, and will definitely be one of my favorite houses of all time. It has everything I look for in a haunted house – amazing sets, costumes, special effects, unique scares and it’s also one of the longest houses this year!

2.) Stranger Things – As a huge fan of the series, this house definitely did not disappoint! Universal did an incredible job recreating the sets from the show. From walking through Mirkwood to heading into the Upside-down via the portal in Hawkins Lab, you really feel like you’ve stepped back in time and into the world of Stranger Things! Make sure you get to this house as early as possible, as it always has a long wait throughout the night!

3.) Slaughter Sinema – This house is one of the original creations for this year’s event, and it’s just so much fun! It takes its inspiration from the campy B-movies from the 80s, with each scene based on a different “movie”. Some of my favorites are Schitties Kids, The Cult of the Beast Baby, Midnight Snack 2 and The Swamp Yeti.

4.) Seeds of Extinction – This is probably the scariest house this year thanks to its unique theme. Basically, alien plant life has taken over after a meteor hits Earth, so EVERYTHING is covered in plants. The scareactors in this house all blend in with their surroundings very well, so it’s hard to know what’s just part of the sets and what’s going to jump out and scare you!

5.) Carnival Graveyard: Rust in Pieces – Another one of the original creations this year, Carnival Graveyard takes you through a junkyard full of discarded carnival/amusement park props. I love this house for the many, many easter eggs you can find hidden throughout the scenes – including props from past years of HHN as well as former Universal attractions. It also has some really cool scares and the overall ambiance is spooky and chaotic!

6.) Trick ‘r Treat – Halloween Horror Nights 27 featured a hugely popular scarezone based on this movie, so it’s no surprise they brought the property back in the form of a house this year! Fans of the film will definitely love the attention to detail and I thought some of the sets were very impressive. I’ve only seen this movie once, so I need to watch it again and maybe I’ll appreciate this house more!

7.) Scary Tales: Deadly Ever After – Scary Tales has become a fan-favorite original series throughout the many years of the event. The first installment debuted in 2001, and since then it has appeared at the event four more times – three times as a haunted house and once as a scarezone. This year’s house features twisted versions of Hansel and Gretel, Goldilocks, Rapunzel, Humpty Dumpty and several others. It’s a fun house to go though and has some huge set pieces, but it’s really my cup of tea, so that’s why it’s ranked down here.

8.) Dead Exposure: Patient Zero – Another original concept returning this year is Dead Exposure. The first house debuted in 2008, and this year’s version is a prequel of sorts. Based in Paris in 1928 during the outbreak of a zombie plague, you’ve been given a vaccine to avoid being infected. Unfortunately, a side effect of the vaccine is temporary blindness, so most of this house takes place in the dark, with only strobes/flashing lights to guide the way. It’s an interesting concept, but in my opinion the sets are rather bland and the constant strobes are more of an annoyance than anything else.

9.) The Horrors of Blumhouse – This house takes you through two of Blumhouse’s recent films: Happy Death Day and The First Puge. Seeing Happy Death Day adapted into a haunted house is a bit bizarre, because you basically just go through the same bedroom scene four times as the day “resets” like in the film. The baby mask does make for a good scare though, and they did a good job re-creating some key moments from the movie. The second half of the house is based on The First Purge. I haven’t seen any of the Purge movies, but the costumes and environments definitely provide great material for a house, which is probably why we’ve seen The Purge at HHN so many times over the past few years. Overall the house is very well done, but I prefer most of the other houses to this one.

10.) Halloween 4: The Return of Michael Myers – I’ve never seen any of the Halloween sequels, so that might be part of the reason why this house ranks at the bottom for me. Don’t get me wrong, it’s not a bad house, it just seems to lack the grand scale and impressive set work that most of the other houses feature. Combine that with Michael Myers popping out at you in virtually every scene, and this house become repetitive very quickly. 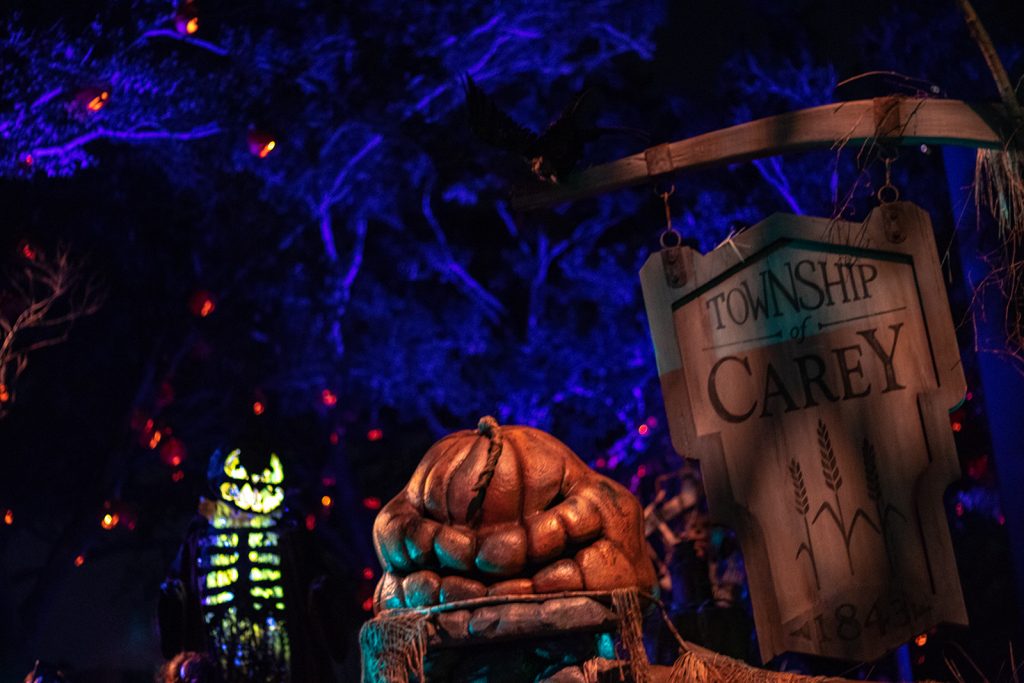 I won’t bore you with another list ranking the scarezones, and frankly, it’d be really hard to rank them as they’re all so unique this year. The scarezones have slowly started becoming more and more theatrical, with mini-shows occurring every 30-45 minutes. This year is no exception, with Chucky and Vamp 85 both featuring multiple “stop and watch” productions throughout the night.

In Vamp 85: New Years Eve, you’ll encounter vampire versions of some of your favorite pop icons from the 80s. Every 30 minutes or so you can catch a dance show and ball drop to ring in the new year on the zones main stage. This is a great zone to spend some time in because there’s pretty much always some kind of show element going on, and the vampires  and other actors do a great job of interacting with guests making them feel involved! 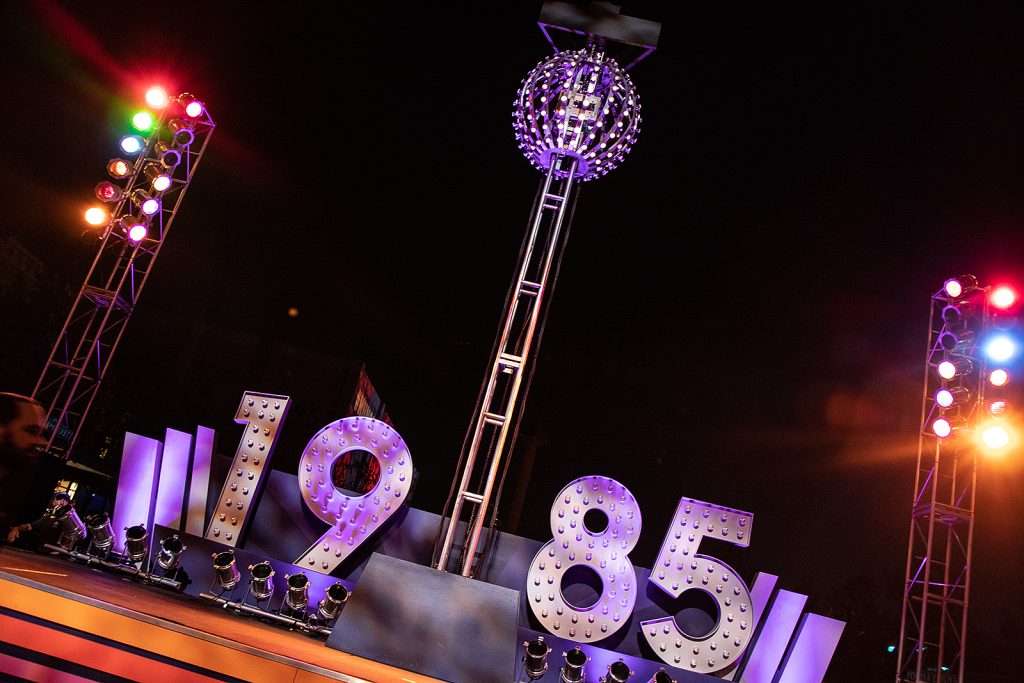 The Revenge of Chucky  scarezone is another one you’ll want to spend some time in, as there are multiple shows that happen on the large set pieces throughout the night. The most popular one is, of course, Chucky’s own stage where he comes out and insults members of the audience and then kills the CEO of the Play Pals toy company. Tons of other toys also roam around this zone, so you never know when one of the toys from your childhood might try and scare you! 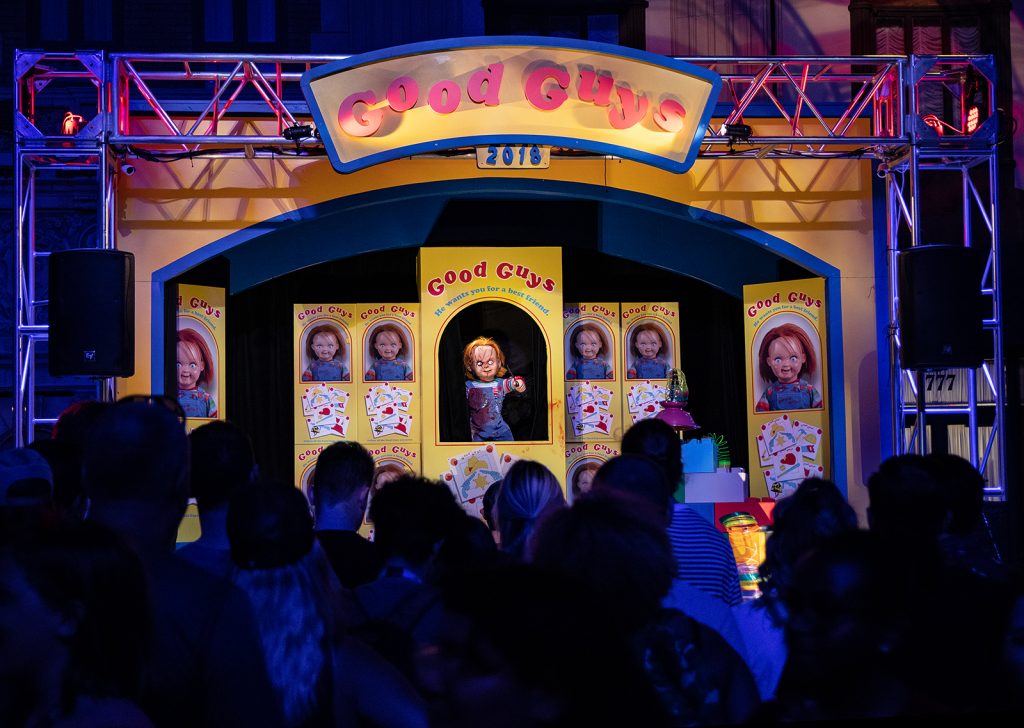 My favorite scarezone this year is definitely Killer Klowns from Outer Space. The costumes are absolutely amazing, and each clown has a unique prop and so much personality. This zone isn’t the biggest, nor does it have any shows to stop and watch, but I’ve consistently found myself spending the most time in this zone just watching the hilarious antics of the Klowns and the reactions of guests. 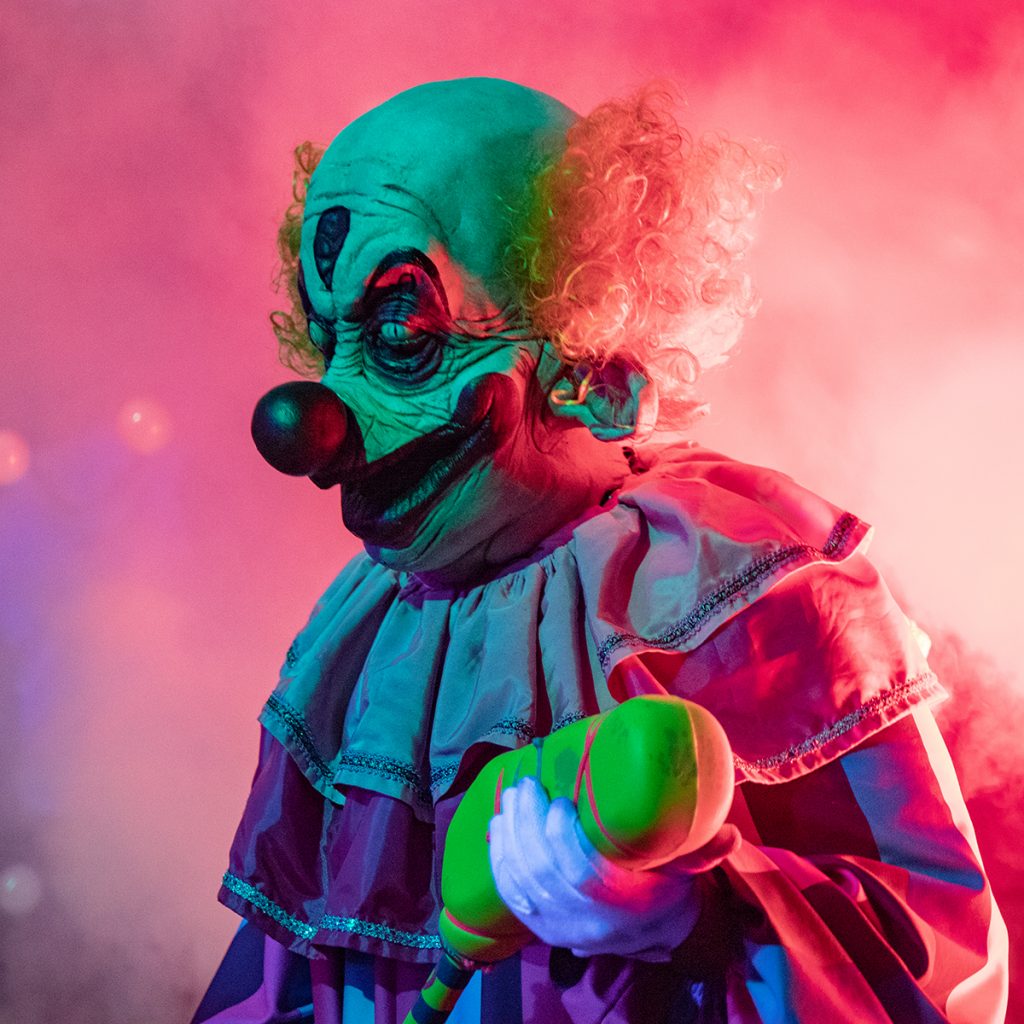 Finally, the last two scarezones are The Harvest and Twisted Tradition. Both feature some similar costumes, reminiscent of classic Halloween themes. Twisted Tradition features the glowing jack-o-lanterns in the trees of Central Park that have become a staple of the event, as well as some very cool glowing pumpkin masks. The Harvest scarezone is located at the front of the park and features large props with details from each of this year’s houses, acting as a sort of preview of what’s to come. There are also two roaming hoards of chainsaws near the back of the park, one themed to mechanics and the other to crazy circus clowns – they definitely help to fill the dead space when walking to the back of the park, Plus, having chainsaw scareactors is basically a requirement at the event these days, so it’d feel weird without them. 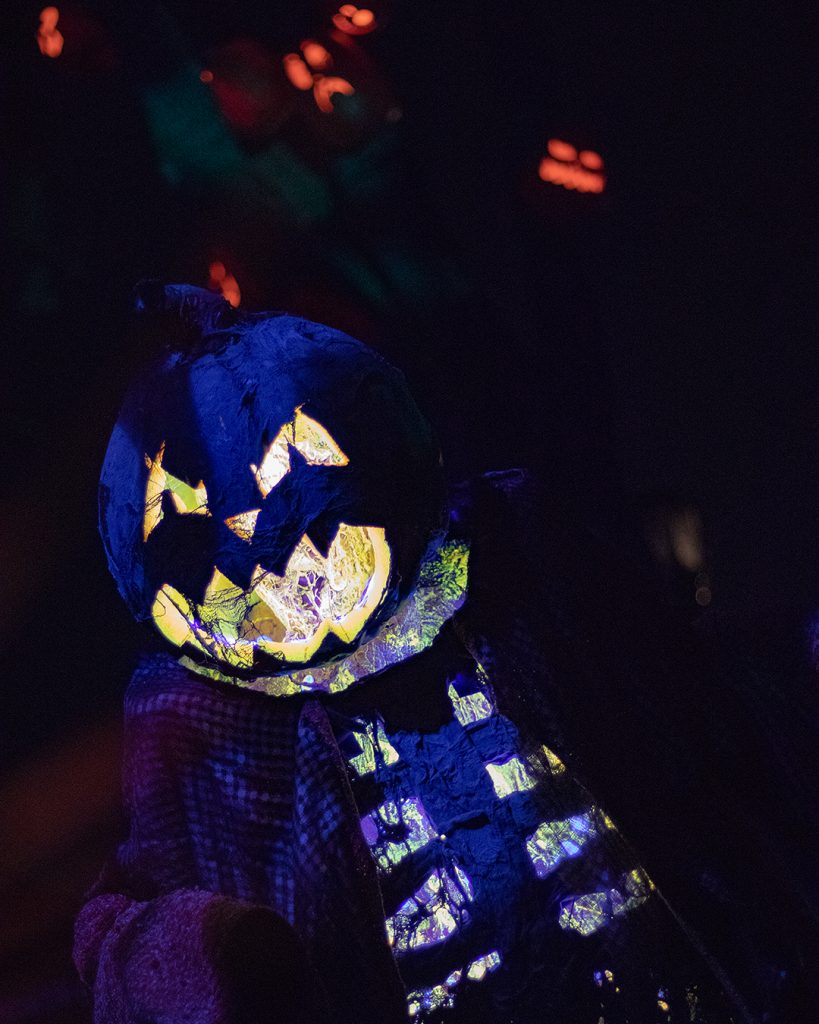 Overall I really enjoyed Halloween Horror Nights this year, and plan on attending many more nights as the event goes on. I’ve been a huge fan of the event for over 15 years now, so I know I’m not the toughest critic – I’m just happy to go and enjoy what it has to offer year after year. It’s definitely incredible how much the event has grown, and having ten houses this year really makes it hard to see everything in one night. So if you plan on coming this year, either get an express pass or try and come on multiple nights if your budget allows it.

Also, be sure to stay tuned for some awesome 360 degree, lights-on virtual tours from this years haunted houses! Those should be launching sometime next week, after we get our Howl-o-Scream review up, so stay tuned for that too, haha!

Thanks for checking out our review of Halloween Horror Nights 28! Be sure to follow us on Instagram and Facebook for tons more photos from this year’s event, as well as all the Florida theme parks! And while you’re here, check out some of our other articles!