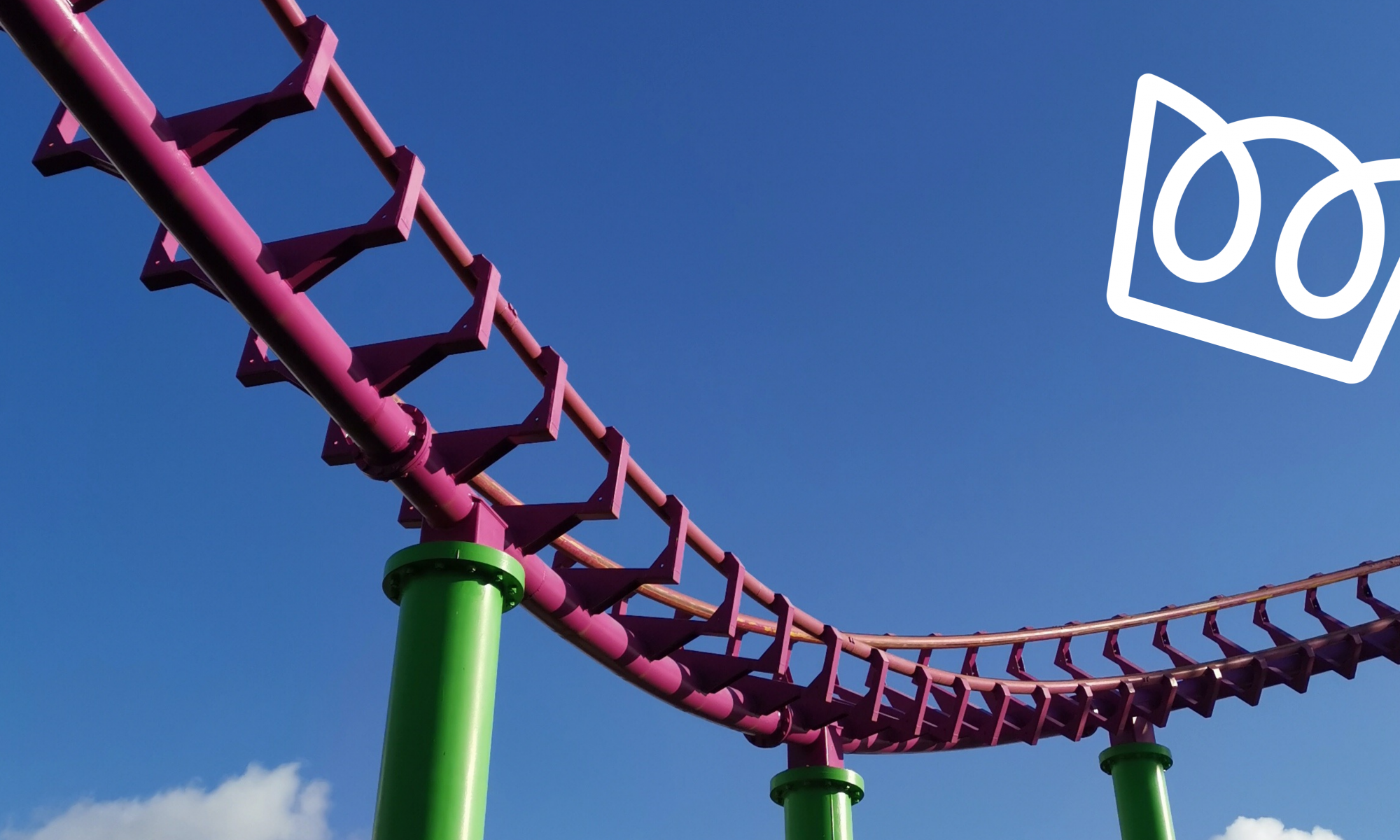 There are many top places to visit in the UK with beautiful beaches and fantastic funfairs and plenty of doughnuts! Many of these places have a variety of rollercoasters, flat rides, dark rides and amongst these are hidden gems! Here we talk about my first ever trip to Skegness in the UK and take a look at what Fantasy Island has to offer.

I have visited alot of the coastal theme parks and piers in the UK but sadly had never traveled up to Skegness. After a 4 hour drive I arrived and was totally shocked about the size of the park! We opted to drive passed the park entrance in the car just to get a good look. As we decided to park in the second car park, we noticed it was filing up quickly.

We were greeted by Heidi, the parks marketing co-ordinator who took us through the park and answered a few questions we had. After a quick Gopro check we headed straight for Millennium. Not a bad choice to start the day with right?

Millennium is a Vekoma steel Coaster which was custom built for the park. It was called Millennium as it was due to open for the year 2000 but has been operational since May 22nd 1999. The ride was the first Thrill Ride to be opened at the park and certainly lives up to that! The layout is pretty impressive with three inversions and speeds up to 56mph/90km/h. From the top of the lift Hill you can get a great view of Skegness and out to the North Sea. The Coaster is smooth for its age and feels pretty fast, the inversions are smooth but have alot of force in them. The coaster is enjoyable and I did re ride it several times over the day!

We decided to head back into the main building area which completly wowed me. The park is themed so we’ll and truly was not what I was expecting at all. The main centre is fabulous and full of rides and indoor attractions. With 31 rides to choose from you certainly aren’t short of something to do.

The inside of the centre was pretty magical, it really reminded me of the Arthur area at Europa-Park in Germany. It was fully themed and even had its own adventure golf inside too, which we of course tried out! We decided to try out the rides inside, they were mainly themed around the jungle with dinosaurs dotted around and inside the adventure golf. There was a jungle style monorail ride which gave us a great look at the inside area, we actually spotted most of the rides from this ride and got a good idea where everything was.

We had already spotted the newest ride at the park The Guardian when we arrived and we eager to try it out. Sadly we queued a few times but it broke down several times. We did inquire as to what we would find inside and it’s a Robotic Arm Ride. The theming for this ride was so good, they have really gone all out for this one, its just a shame we didn’t get to ride it!

Along with The Guardian, the park was opening two other new rides this season. Sadly again both of these were not open but we did get to see them and grabbed some pictures. The first is the Wild River Rapids which has come from Lightwater Valley and I’m sure will be very popular at the Park.

The second and the one I was most sad I didn’t get to ride was, Harrington Flint’s Island Adventures! For this ride and the guardian Fantasy Island have kept pretty quiet about what they were and I really didnt know what to expect. Well the UK has gained another interactive Dark Ride!! Following the story of Harrington Flint who comes face to face with his nemesis, fighting off Mayan zombies and traveling through jungles, portals and waterfalls! Sounds like a great addition to the park and to the UK too! I’m pretty sad as I really love a dark ride but we will return to bring you and update in the near future!

Staying inside the center we jumped on board of the sweetest hot air balloon ride! Built by UK manufacturers WGH transportation engineering who built rides like The Dragon at Legoland Windsor and both the family coasters at Fantasy Island.

The rest of the rides in the centre were just as cute, I particularly loved the Magical Seaquarium! An indoor boat ride which takes you on a magical journey with some pretty cool theming and scenes!

We tried out the waterflume, Dragon Mountain! It’s was great although my boat had a hole in it and I was pretty soaked!

There were also a few little track rides and play areas too! We decided to head out and take a look around the other rides in the park!

Today was a pretty special day for me as I was on 98 creds and after a earlier ride on Millennium, this meant that credit 100 would fall on The Odyssey! And what a Coaster for number 100!!

This steal beast has a shocking height of 51m/167ft and was built by Vekoma. It was originally called Jubilee Odyssey in commemoration of the golden jubilee of Queen Elizabeth ll and is the third tallest Coaster in the UK. It is the tallest model of Vekomas suspended looping Coaster in the world and is pretty terrifying to look up at!! Pulling up to 4.3g and with speeds of up to 63mph/101km/h they should have given it a scarier name!!

The ride itself was pretty smooth, although rattly in places but with its speed it’s not suprising. The inversions are pretty wild and it really does pull through them with some serious force. It’s been a long time since a ride made me nervous (Slammer at Thorpe Park was the last ride) but for some reason, probably the height I was scared. I did however throughly enjoy the ride and decided we would come back later for a re ride!

We stopped for a snack, the park has over 40 places to grab some food. We decided on some cream cakes from one of the market stalls but there was so much to choose from!

Fantasy Island is home to Europe’s largest 7 days market! With everything from towels to sunglasses you can shop between rides and probably re design your house too (sofas and beds were on sale in the market!) It’s pretty traditional for seaside towns to sell rock and fridge magnets and at this market there wasn’t a shortage!

Outside the fun continued with a huge amount of rides including a rollercoaster and a Starflyer! There’s also alot of spaces to sit down and enjoy the area and eat some food.

There were alot of flat rides which ranged from kids car rides to an S&S Space Shot called The Volcano!

There are three family coasters in the park, the first was The Rhombus Rocket a powered steel Coaster. Built by WGH transportations and completing two laps its a sweet but nippy Coaster, especially through the helix. I loved the interaction with Millennium the ride too!

The second is Jellikins and steel family coaster again made by WGH transportations. We didn’t ride it as it was for smaller children and out of fear of getting stuck in the cars! But it was cutely themed and ran two laps.

The third Coaster is a Wacky Worm which is located near the Starflyer, we rode it for the credit of course!

We headed to the Lava Creek Adventure Golf which was back inside the complex. Another hugely dinosaur themed attraction which was great fun and comes free with the wristbands! I did infact score a hole in one on the last hole which was the best I did the entire course (I was terrible!)

One thing I truly loved about Fantasy Island was the ride entrances and signage. Most of the rides inside had the most beautiful old fashion signs which just added to the parks charm. We got a few rerides on some of the coasters and grabbed some food before taking another walk around the park.

We saved the reride on The Odyssey until the end of the day and got to experience something unexpected. Whilst traveling up the 167ft lift Hill the train came to a complete stop. As someone who is not great with heights I was terrified.

After a few minutes we were joined by staff members who reasured us we were OK and they would get us moving as soon as possible. After the nerves subsided I did managed to have a look around, we could see for miles. We had gotten on the front of the train and with this we were told that we would dangle over the edge of the first drop until the rest of the train cleared the lift Hill. The thought was terrifying but luckily was over very quickly. The staff were so reassuring and kind on and after the ride, they really did want to make sure we were OK. We were shaken but looking back it was a pretty unique experience.

Talking of staff I just want to add that nothing seemed too much for any of the staff at the park. They were all so friendly and welcoming and this really added to how much I enjoyed the park.

Overall the park was a great day out, it certainly is up there with my favourite UK parks. The selection of rides and attractions is huge and really its a whole family experience. I definitely recommend the park to everyone as it is beautiful and charming, especially in the sunshine!

A big thank you to Fantasy Island for being some welcoming for our visit.