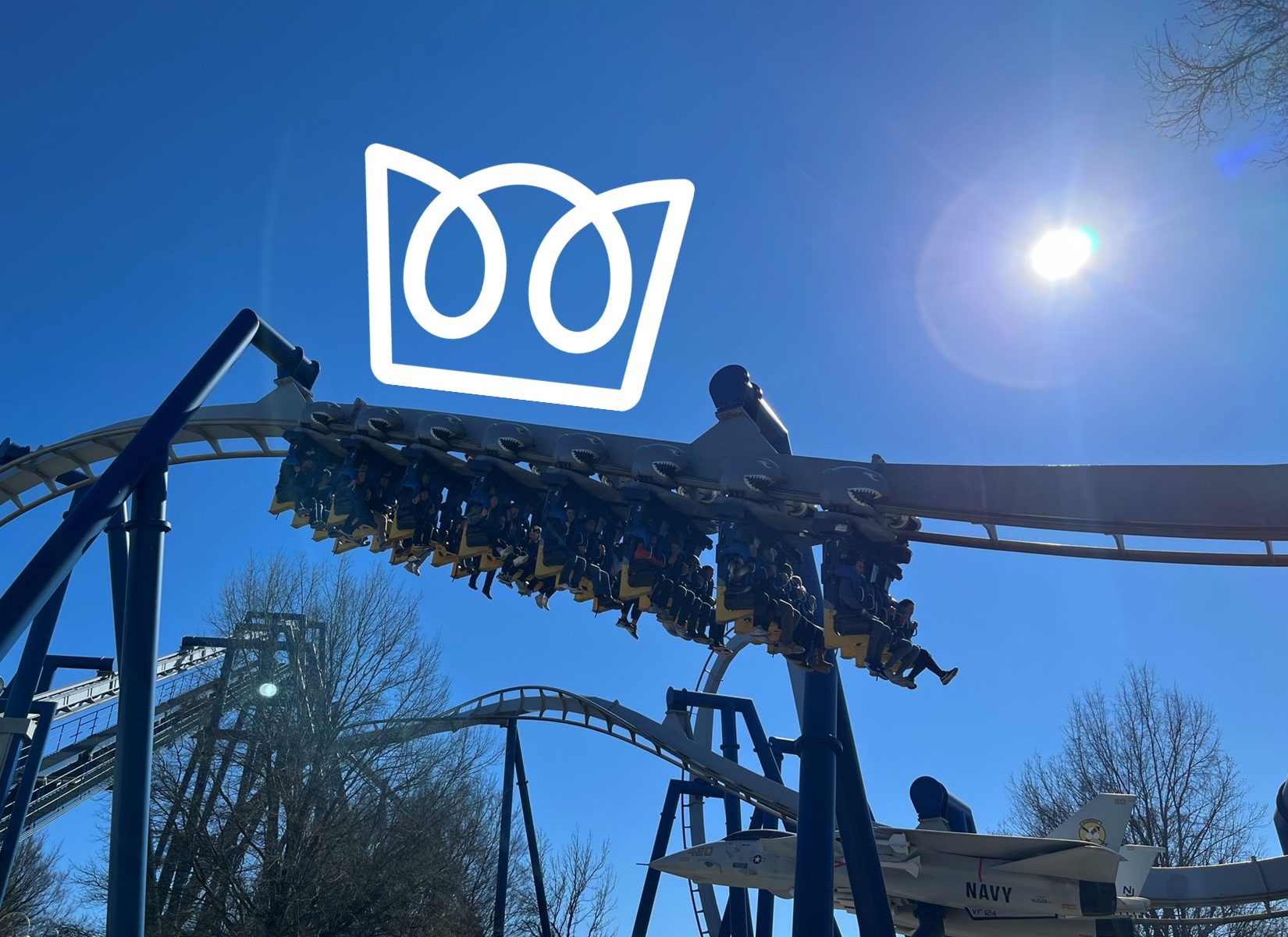 In the Midwest and eastern U.S. we are always excited for the reopening of our seasonal parks and the start of another coaster season. Among the parks with the earliest season opening is Carowinds. So on March 11th my friend Pete and I made the trek from central Ohio to this unique Cedar Fair Park. We arrived very late on Friday night and went to bed with visions of Fury 325 in our dreams.

After a quick breakfast and coffee run we parked and were walking into the park right in time for its 10am opening. Unfortunately many of the park’s coasters were did not open with the park. We made our way towards the back of the park to one of the major coasters running, Copperhead Strike. This 2019 Mack multi-launch has faced a certain amount of criticism for its weak launches a sluggish pacing. I know my own perception was that it was a pretty weak attraction when I initially rode it in 2019. However, my ride on a cold morning in 2022 made me reassess this coaster. While the launches are weak, if you approach Copperhead as a compact multi-looper, you’ll find it’s a pretty strong coaster. The jojo roll and cutback are especially memorable inversions, while the rest of the ride is a potent blend of hangtime, airtime, and lateral forces. It really is an excellent addition to the park and uses its small plot masterfully. The Blueridge Junction section of the park is also a handsome refresh of this corner of the park that blends so nicely with the County Fair and Carolina Boardwalk.

Our next ride was the park’s Vekoma Boomerang, Flying Cobras. This relocated boomerang features Vekoma’s comfortable MK1212 trains which greatly contribute to a better ride experience. While dime-a-dozen, the intense experience of a Vekoma Boomerang is not to be underestimated. Our next ride was another off-the-shelf model, the park’s Mack wild mouse Ricochet. Ricochet shares the Carolina Boardwalk with two classic Arrow coasters: the mine train Carolina Goldrusher and the original quad-looper Carolina Cyclone. While Goldrusher was closed for our visit the recently repainted Cyclone did open. This classic recently received 2nd generation Arrow looper trains from King’s Island’s Vortex. These do a lot to improve the ride experience and I can happily say this classic is looking and running better than ever. Unfortunately Fury and Hurler were both still testing so we got a quick ride on the park’s B&M stand-up Vortex before heading to the last open coaster we hadn’t ridden yet, Afterburn.

Afterburn opened in 1999 as Top Gun – The Jet Coaster and remained the park’s signature coaster until the opening of Intimidator in 2010. I think it remains one of the best coasters in the park, and I think it deserves more attention as one of the best inverted coaster in the United States. Afterburn acts as bit of a transition in B&M inverts, not quite as snappy as the early inverts but more forceful than rides like Talon or Silver Bullet. I think this makes it an especially strong coaster, with all the intensity but almost none of the discomfort I find on some of the earlier inverts. We walked by Intimidator which was still down. Unfortunately limited hours meant we were unable to ride this B&M hyper during this trip. My recollections from my 2019 visit made this an easy credit to miss. By this point it was around noon and we finally saw Fury 325 with passengers and quickly made our way to this iconic coaster.

While the construction of Orion at my home park has made the B&M giga coaster much more ubiquitous than when I first rode Fury 325, it remains an impressive signature coaster for Carowinds. The B&M Giga drops are one of my favorite elements on any coaster and the floater airtime they provide is truly outmatched. Fury follows this opening with an graceful but powerful set of lateral-filled turns, a “treble clef” turn around, and then a great series of airtime hills following the ride’s signature “hive dive.” I still contest that Fury might be the most perfect traditional coaster every constructed. It’s a combination of everything that has made coasters great since their inception. It is an absolute joy to ride and ran amazing despite the cold weather. What was less amazing was the operations on this opening weekend. Fury has notoriously efficient operations but the park chose to run this coaster with one train on the opening Saturday of the season. After an initial ride on Fury we took the opportunity to ride the park’s oddball woodie, Hurler. This coaster is rough, but more than anything it is a forgettable ride. Carowinds desperately needs a modern woodie. Due to weather concerns the park also announced the park was going to close at 2 pm on Saturday. This meant we only got one ride on Fury but were hopeful we could have more on Sunday.

We woke up early on Sunday morning hoping for some quick rides on Fury 325. Unfortunately, the cold front had fully arrived and none of the park’s coasters was running at opening. We took this opportunity to take a quick walk around the park and admire the stunning repaint on the park’s prototype Vekoma Flying Dutchman, Nighthawk. While it didn’t open this weekend it is nice to see the park investing in maintaining this unique piece of coaster history. With the majority of the park’s rides still down we took a ride on the Carolina Skytower, an Intamin observation tower that opened with the park in 1973. While queuing one of the Skytower ops informed us that the majority of the park’s coasters are not allowed to run when it’s under 40 degrees Fahrenheit. Unfortunately the forecast showed it remaining under 40 degrees till around 2 pm. We decided to head out of the park and wait until it warmed up. Once we returned around 1:30 pm we saw Fury 325 testing and joined its growing line. After a little more than an hour more of testing Fury opened and we were able to get a second ride of the coaster. Luckily the park was running the coaster with two trains, but the late opening had resulted in a pretty extended queue. We decided to try to get a ride on Copperhead Strike, but it was in the middle of an e-vac when we walked past. Instead, we ended our day with a back row ride on Afterburn. Although Intimidator had also opened at this point we had a long drive back to Ohio ahead of us and a sizeable line made securing that credit impractical.

While our visit to Carowinds proved to be a frustrating one we still enjoyed this unique Cedar Fair park. Carowinds is a bit of a oddity in the American theme park landscape. It’s home to a couple of the best coasters in the country, but overall it feels squarely in the middle pack among the regional theme parks. Despite this awkwardness Cedar Fair has done a lot to make this park feel more polished. The Camp Snoopy, County Fair, Carousel Park, and Blue Ridge Junction re-themes are all beautifully inviting areas of the park. The only section of the park that still feels painfully Paramount Parks is the confused Thrill Zone, although it shares this distinction with similar areas at its Paramount Parks siblings. I look forward to visiting the park during better weather and look forward to what Cedar Fair has planned for Carowinds.