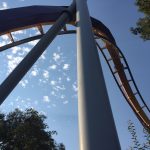 We took another trip out to California’s Great America to provide a pretty action packed update for you guys. Between the recent announcement of Patriot and the upcoming events such as Halloween Haunt and Winterfest, we’ve got plenty to cover so let’s get into it.

In front of the park new billboards have been put up. The front side is advertising 2017 season deals and the backside is for the all new WinterFest event. 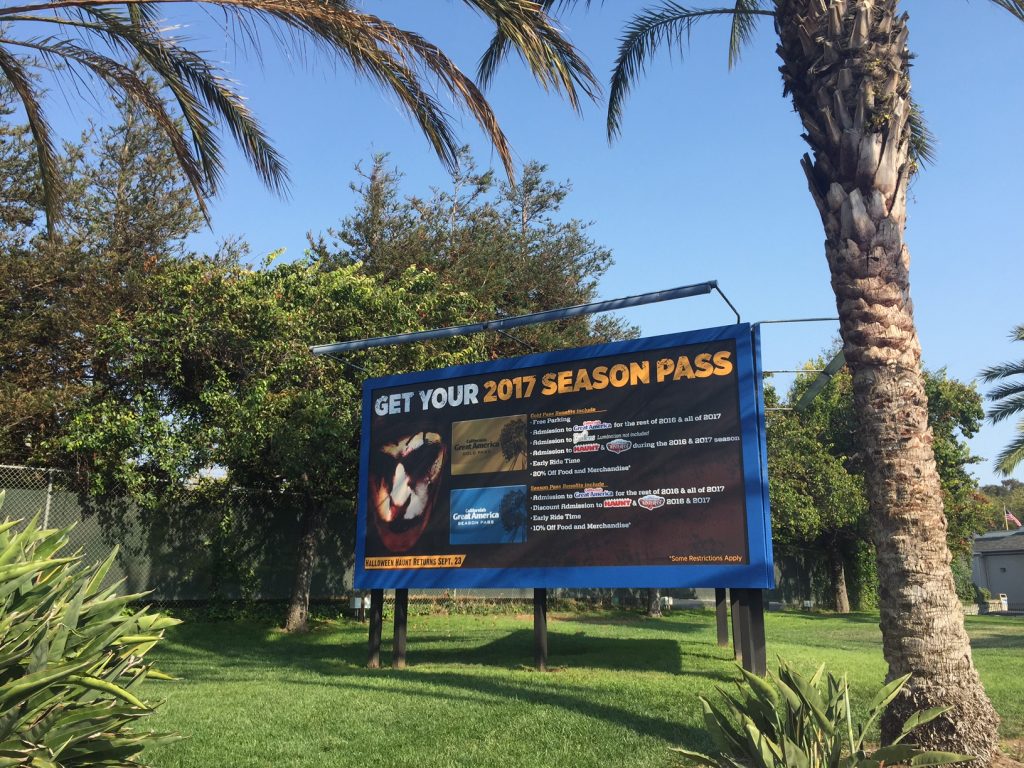 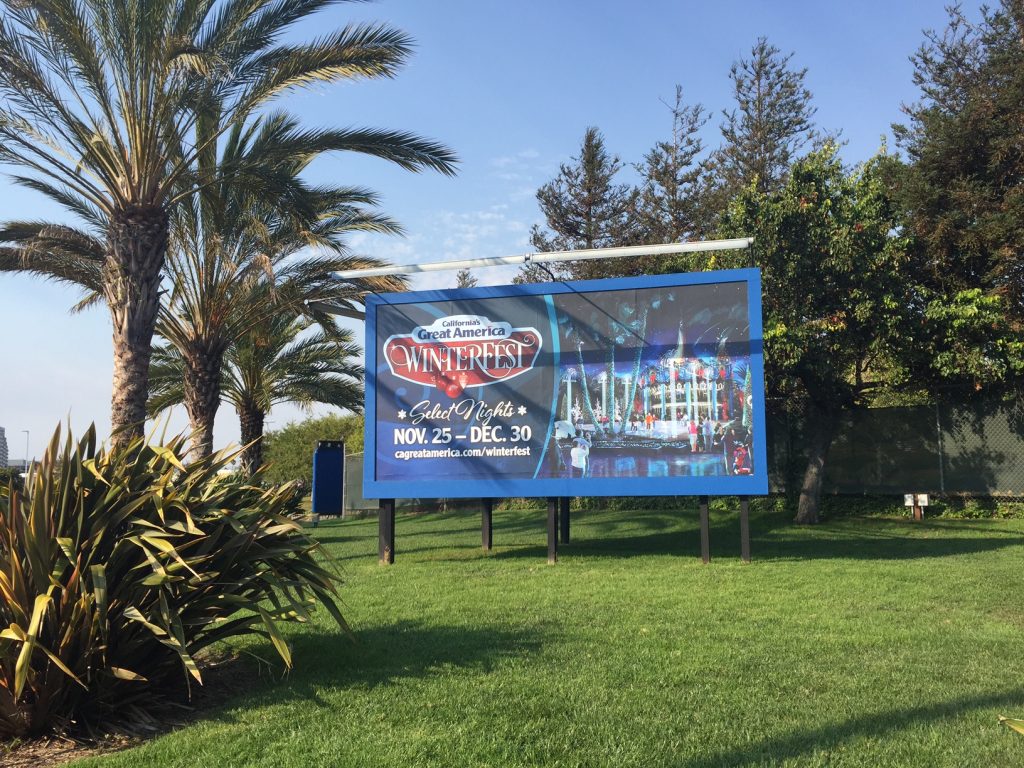 Just inside the entrance is a now hiring sign for Halloween Haunt. It’s still not to late to apply if you want to work as a monster. Maybe you’ll see me there 😉 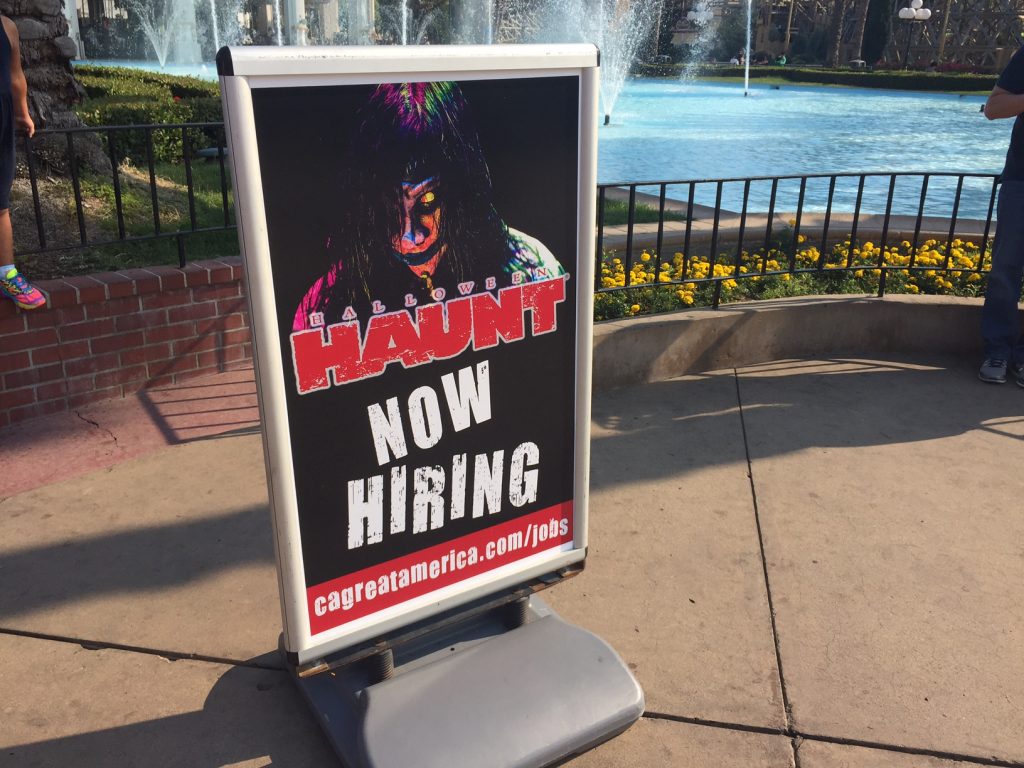 In regards to general park house keeping and operations, a few rides were closed during our visit. The ever-so popular Psycho Mouse was having issues all afternoon and evening and did not reopen. 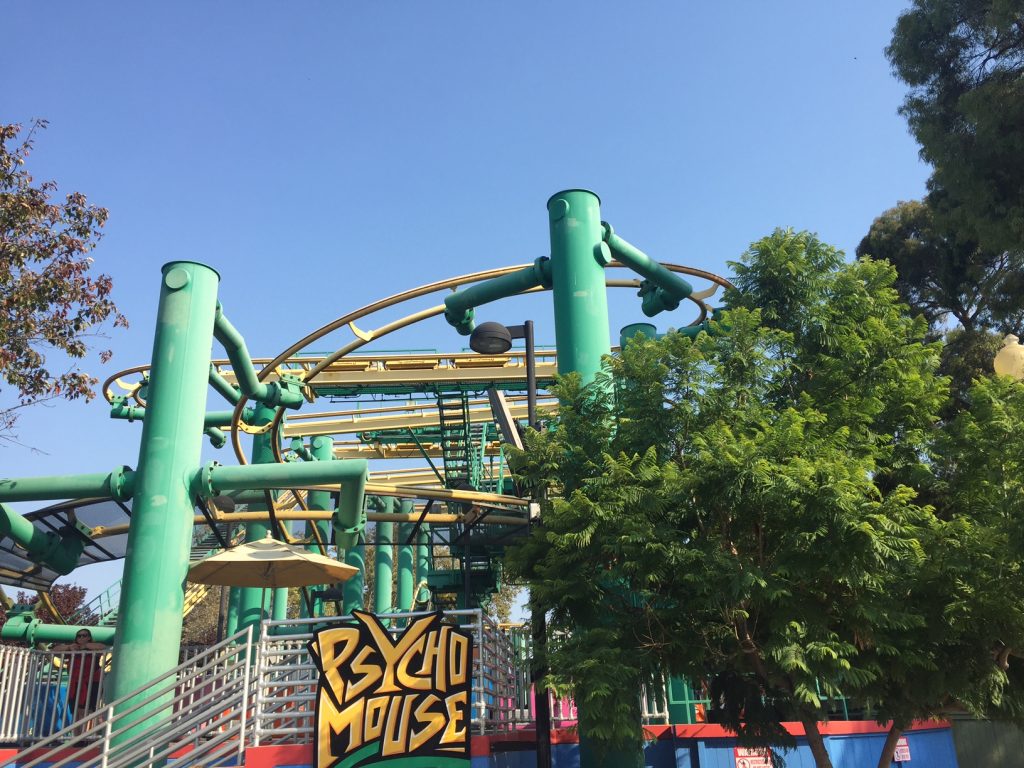 Delirium was also down, where as it’s less reliable Huss sibling Firefall was actually operating. 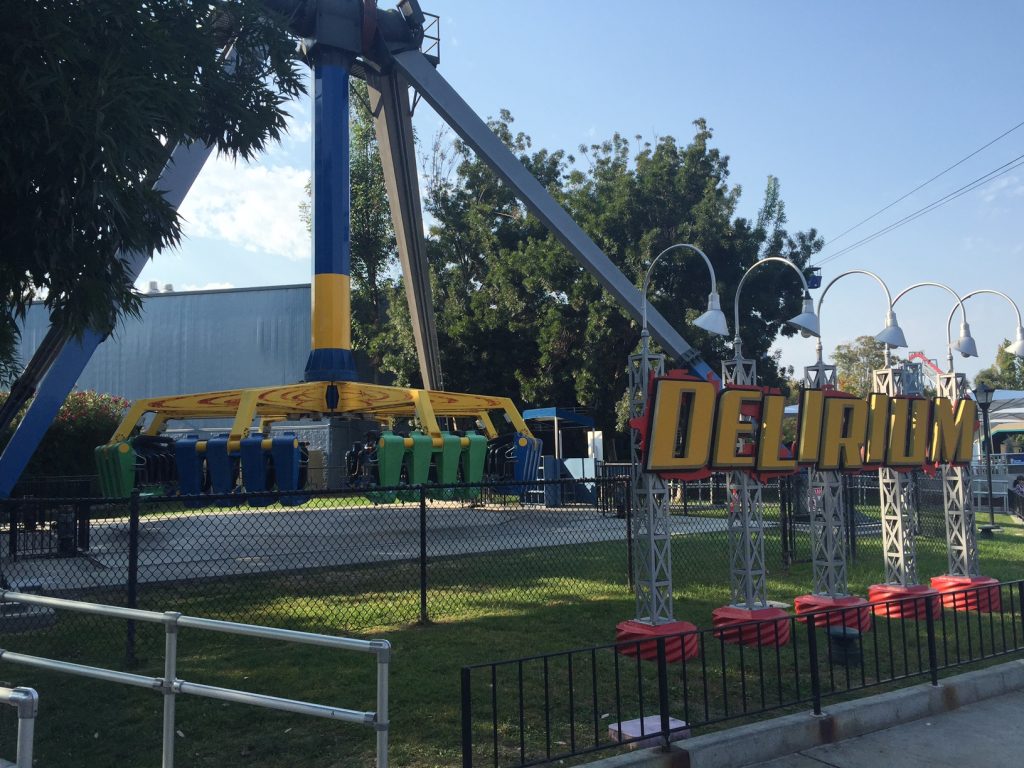 In the area, The Mass Effect: New Earth queue received large shading umbrellas. We can’t tell you how much we appreciate this simple addition, and I’m sure the guests standing in line agreed with us. 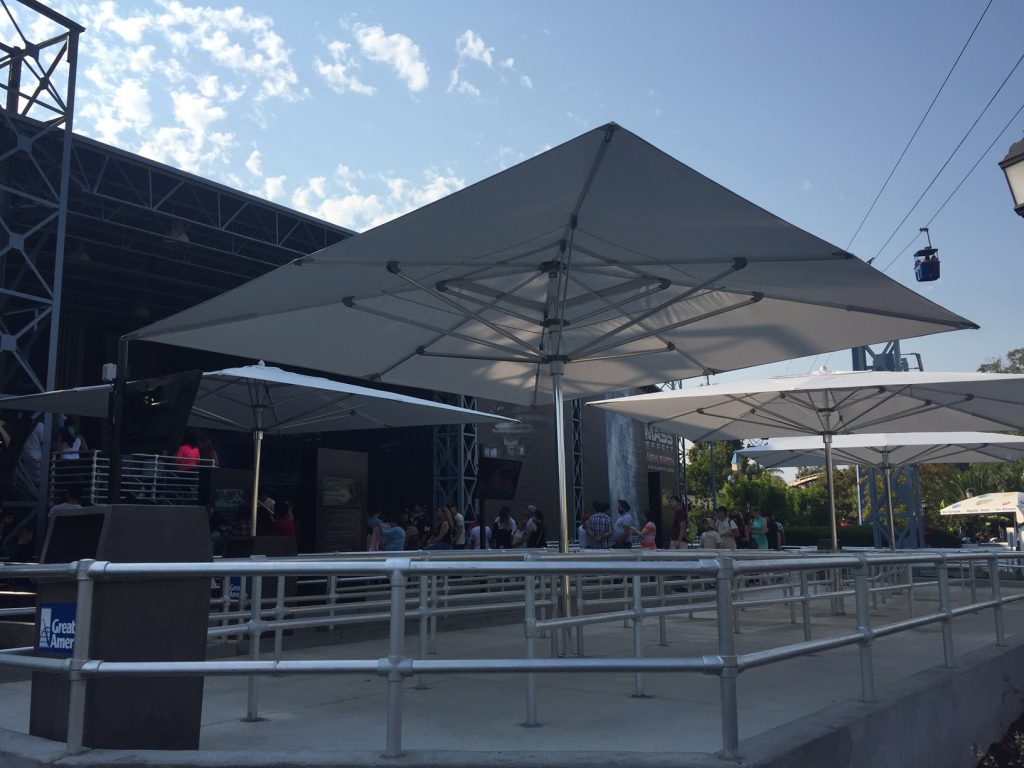 Speaking of ride operations and closures, Great America has announced that Vortex will be closing on September 5th, for good! Vortex will be converted to the heavily rumored floor-less coaster Patriot for the 2017 season! 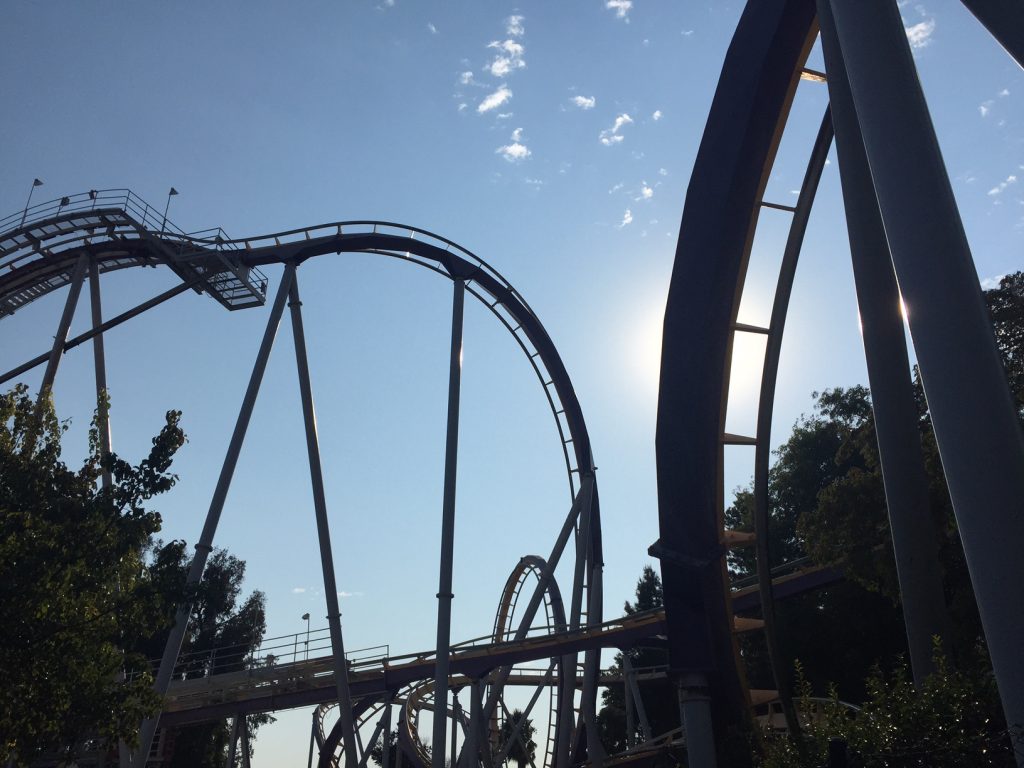 We’ve already expressed our opinions on the matter, but to reiterate, we are very big fans of this addition. It saves space, money, and time all while creating wast should be a much more beautiful and comfortable attraction. 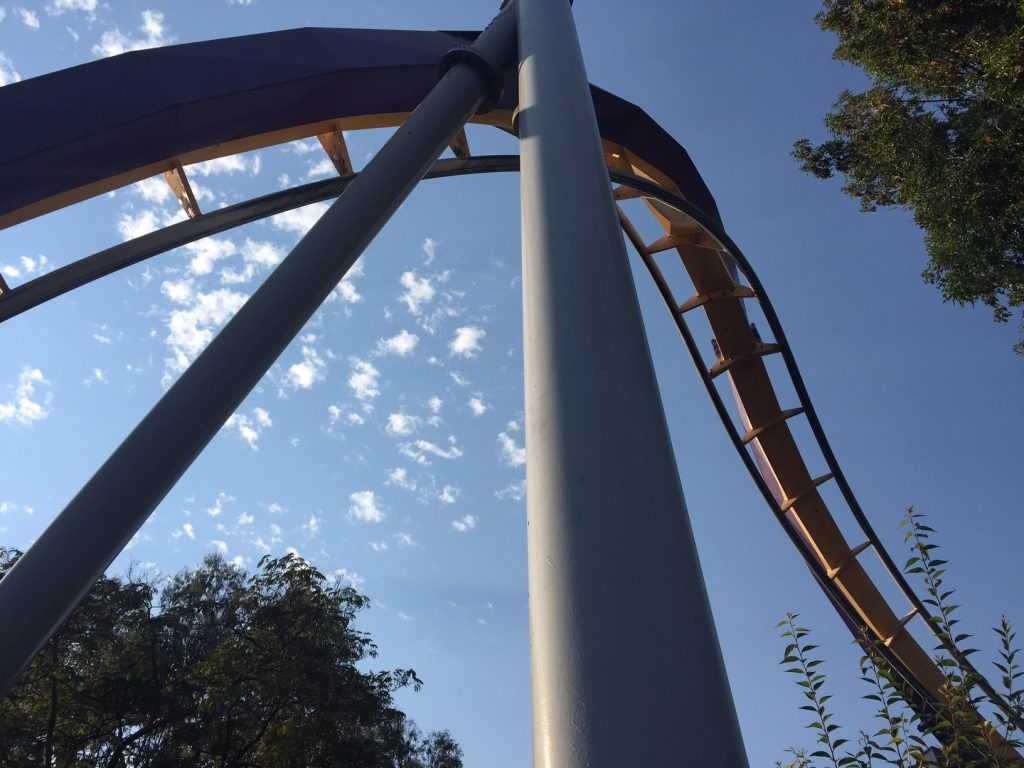 Before we can get to the 2017 season however, we’ve got Halloween Haunt to be excited about! That’s right, Haunt is just around the corner, so let’s talk about preparation. Dia De Los Muertos looks like it’s just about ready to go from this Star Tower view. 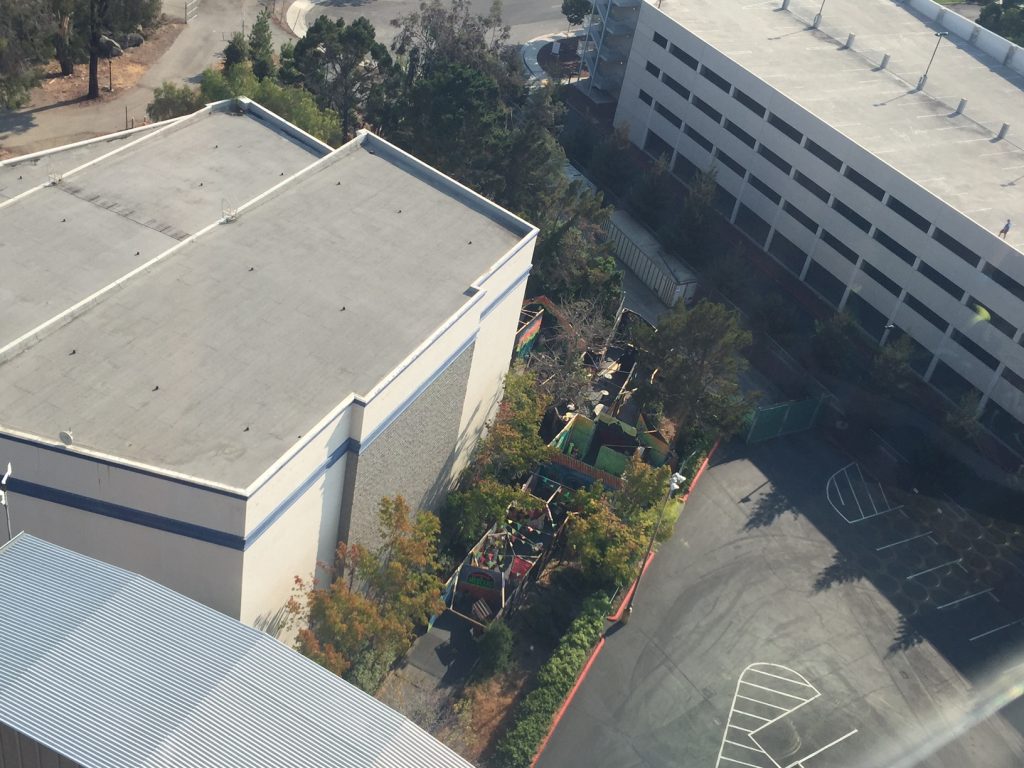 Rue Le Dodge has already closed down to make way for the well received Insanitarium. Walls have already been put up and lots of work has been done. 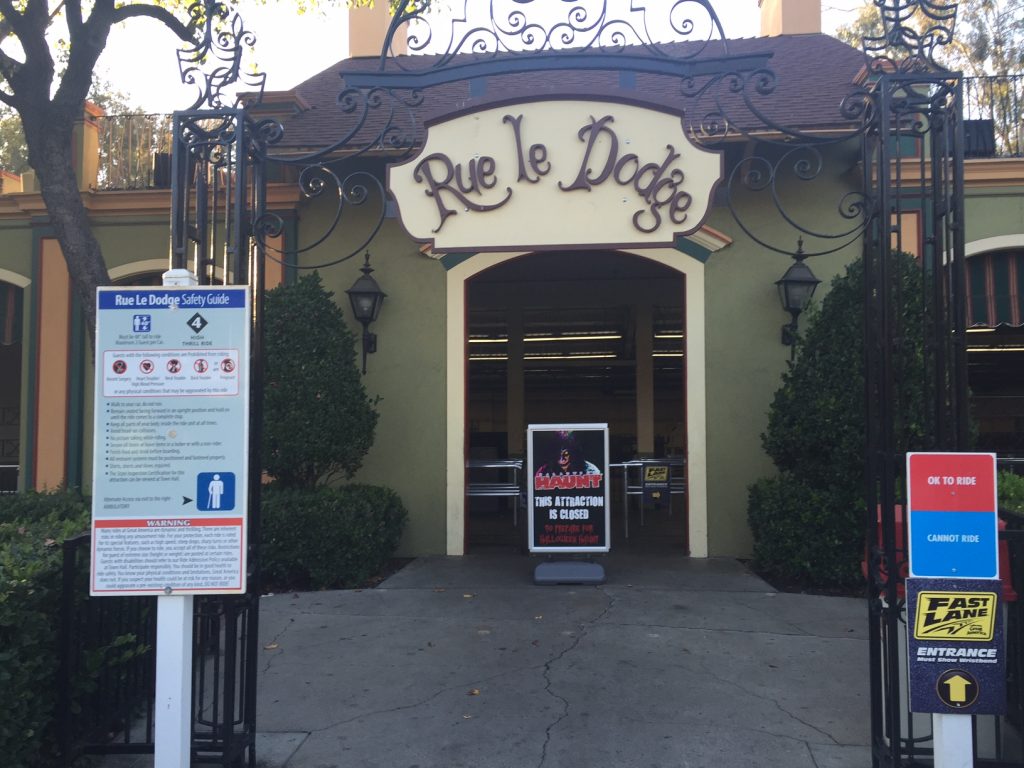 Although not much construction is evident, we can assure you that Wax Museum of Horror will be returning this year. Make sure to swing by this one and we’ll have Jack the Ripper say hello. 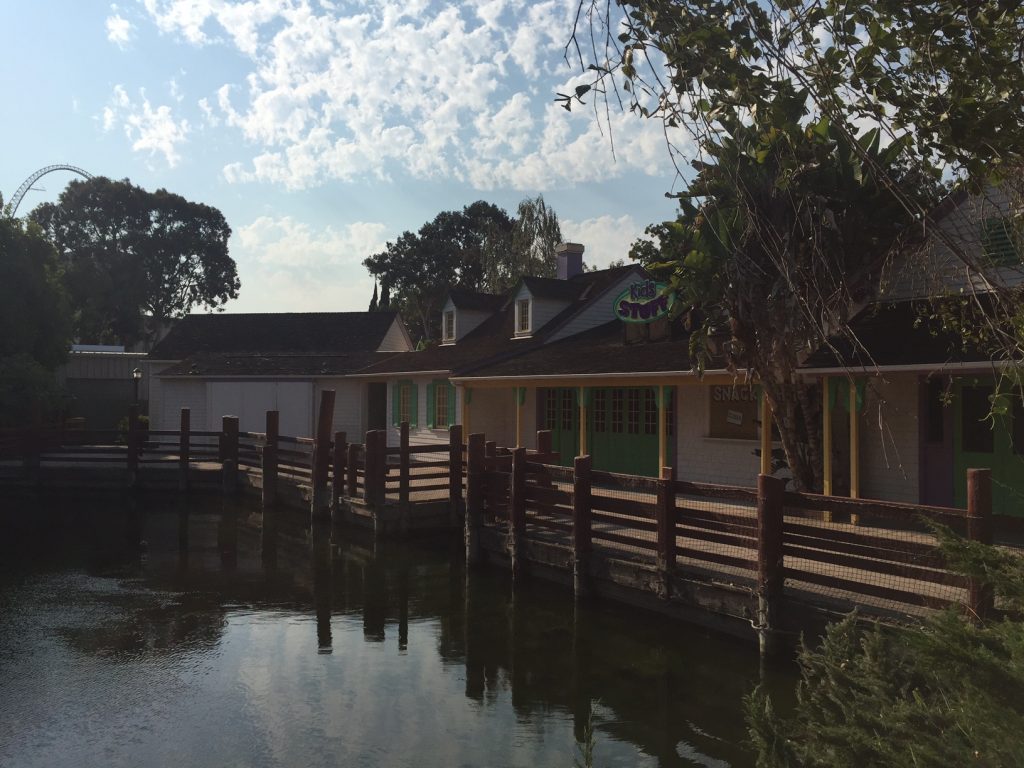 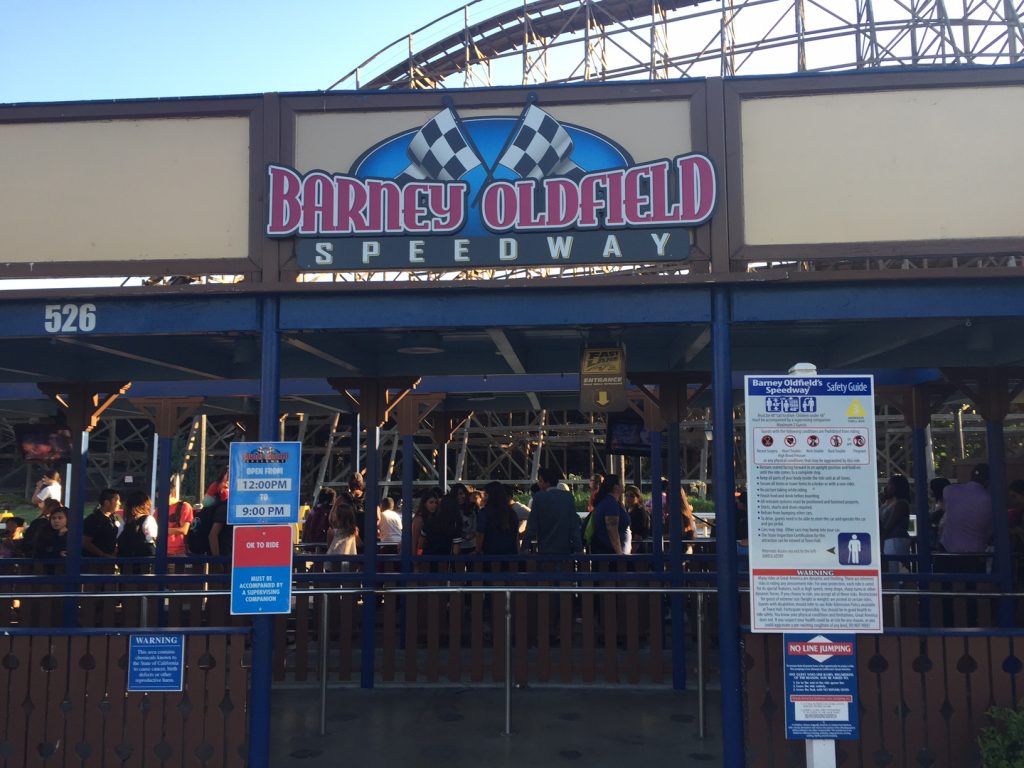 Toy Factory is also likely coming back for Haunt 2016, although who knows, this could be the location of a new maze. Very little construction is apparent from the outside. 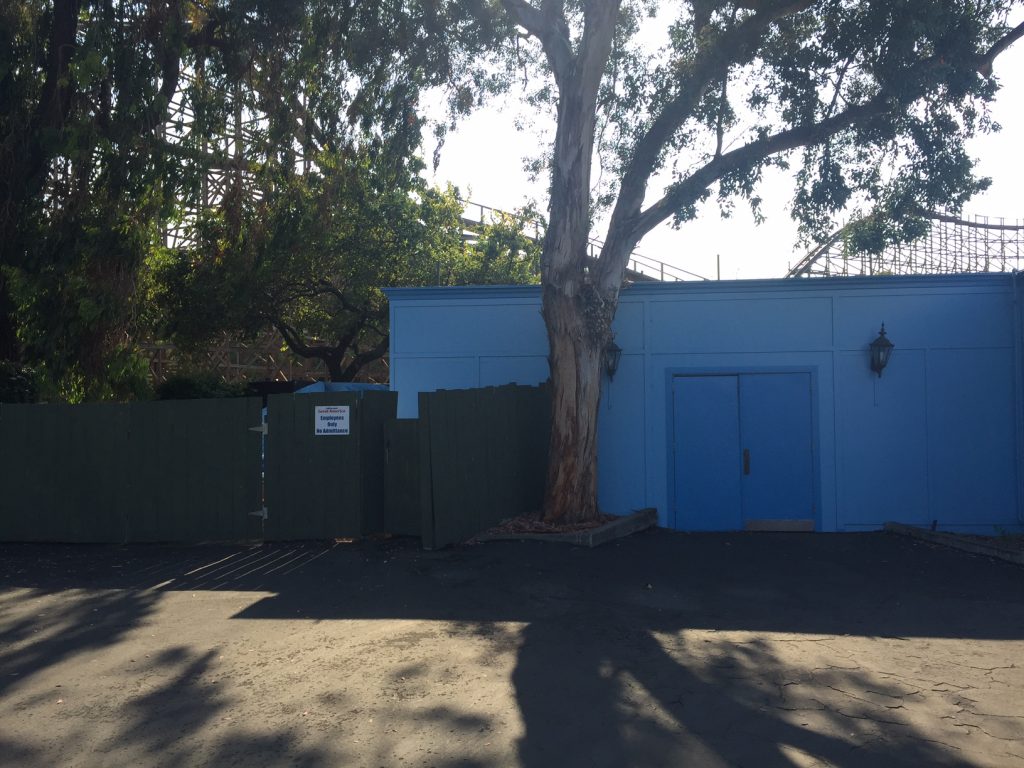 The tent for Roadkill Roadhouse has remained up all year, as well as the building for Zombie High, so we’re sure interior work is being done. 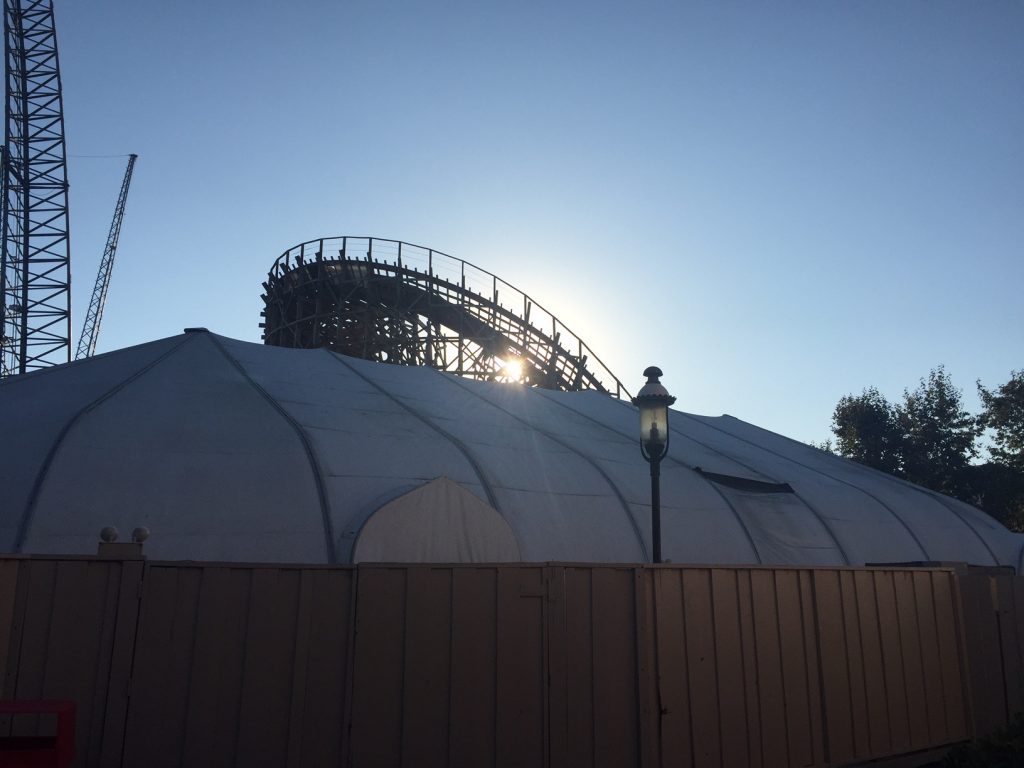 We have information from a very reliable source that California’s Great America will be receiving a VR experience this Haunt as well by the name of Fear VR 5150. Guests will be strapped to a hospital wheel chair at the mercy of the maniacal staff. Vr 5150 will be an up charge attraction and will use Samsung Gear VR powered by Oculus just as Six Flags parks have been using. VR is an excellent platform for horror so we can’t wait to experience it! (Thanks to @Robert_Ingle who shared this on Twitter).

Lastly Madame Marie’s will be returning for 2016, but more interestingly, there are WinterFest decorations in the storage space behind it! The park had a commercial photo shoot recently which is most likely what these were used for. We can’t wait for WinterFest, so seeing signs of it’s preparation is very exciting! 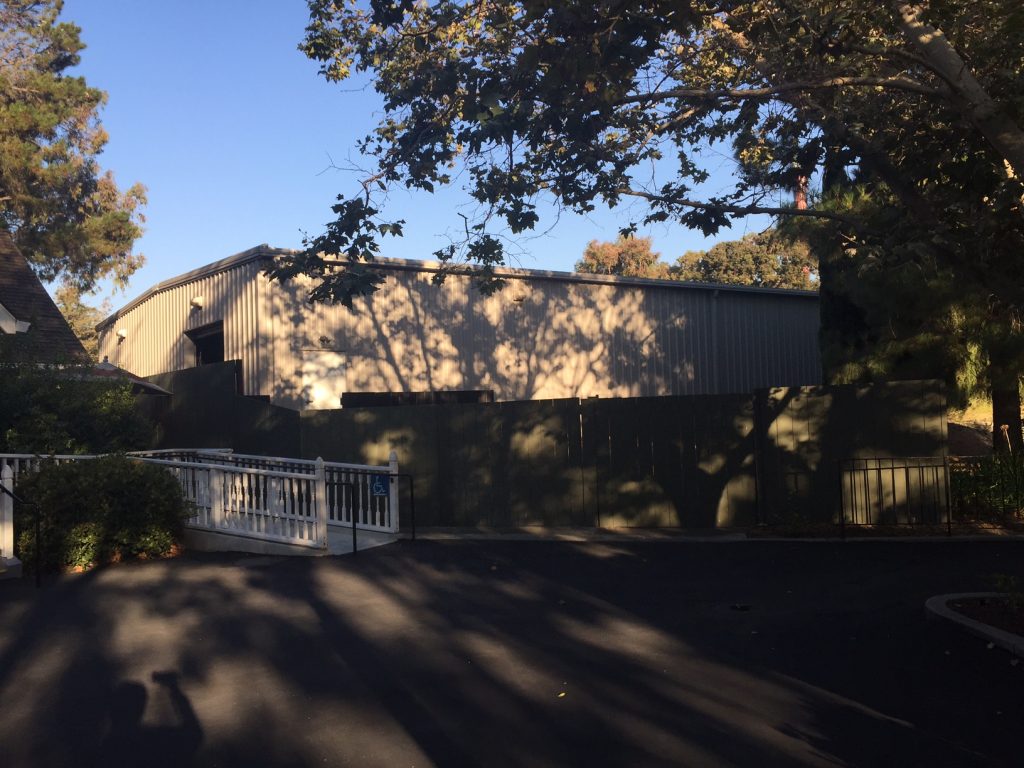 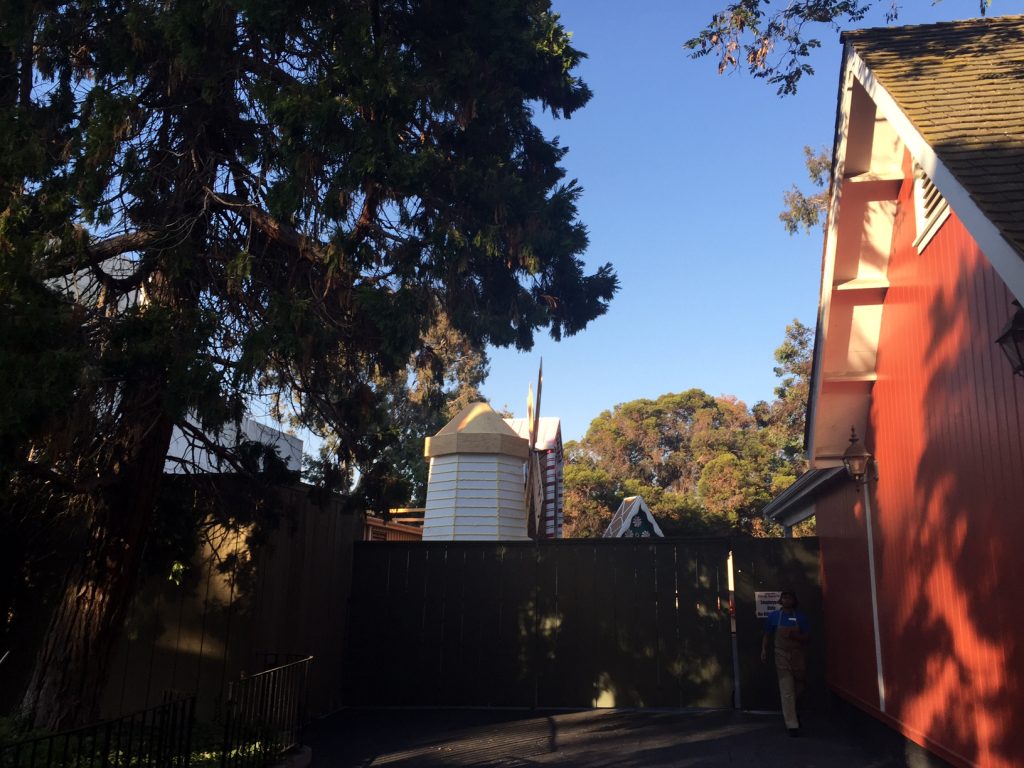 That’s about all for today, thank you for checking out this California’s Great America update, make sure to check out our recent Six Flags Magic Mountain update which you can find here, as well as details and our thoughts on Patriot here! So what are you most excited for? Haunt? WinterFest? Patriot?Comment below and let us know!