Before we dive into the California Top 10, we want to point out two stellar new-comers that made great impacts on their respective parks. Electric Eel opened at SeaWorld San Diego this year and offered a much needed thrill-coaster to the park’s lineup. The 150 feet tall multi-launch coaster is a Premier Rides Sky Rocket II clone, one that can be found at Six Flags Discovery Kingdom in Vallejo, California. Electric Eel benefits from a nicer aesthetic and a much more important role in its park’s lineup. Though we did not believe it stood out enough to be in the Top 10 this year, we sure want all of you to go out there and ride this lovely launch coaster. 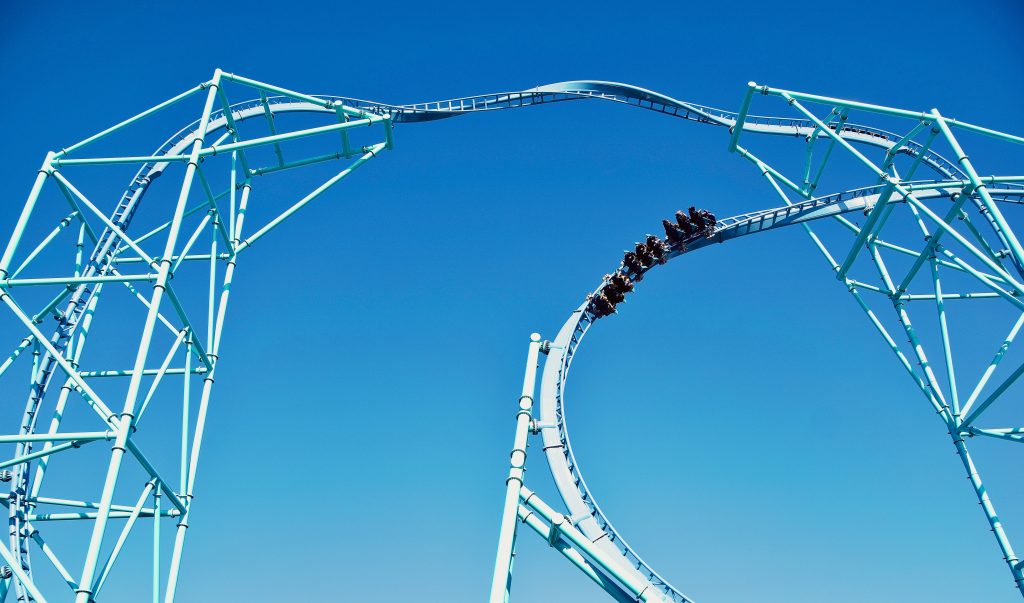 Another newcomer in 2018 was Knott’s Berry Farm’s HangTime, the state’s first dive coaster (not to be mistaken with B&M Dive Machines), which stalls riders vertically before dropping into a mess of Gerstlauer track. The brightly colored surf-themed coaster is a neat replacement in the tight Boomerang plot it was designed for, but does just that. It fills a nice gap, but fails to be in the park’s top 3 coasters for us, and it didn’t make into the top 10 either. Nonetheless it’s a lovely ride, great for families, and it packs a punch. Definitely worth visiting Knott’s Berry Farm for! 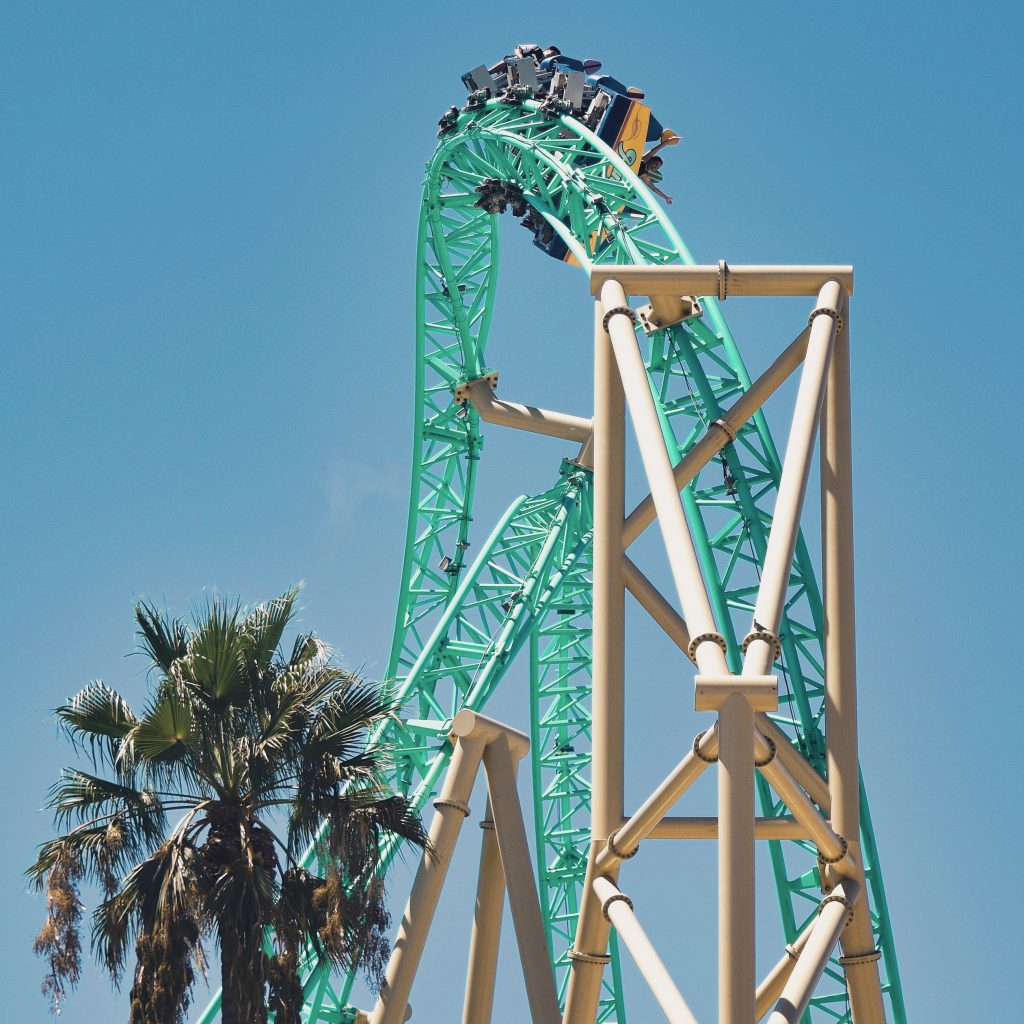 Let’s now get to the top 10 of 2018! We’ll see some significant changes from last year, and perhaps some surprises.

There’s no denying that since the 2016 retracking by Great Coasters International (accompanied by the new Millennium Flyers) GhostRider‘s ride experience is much improved. Along with our audience, we agree that GhostRider is among Knott’s Berry Farm’s best coasters; its height and length set it apart, but that’s not all. The ride is holding up surprisingly well and with a dedicated maintenance team at the Farm, GhostRider remains  smooth, securing a place in our top 10 this year. 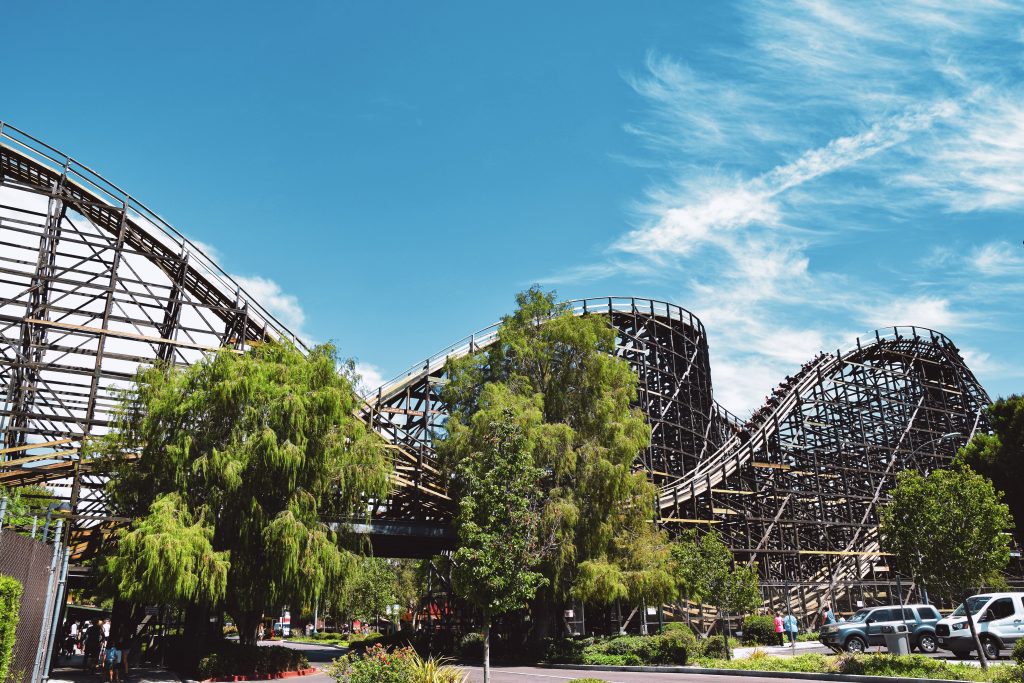 Viper is new on our list this year, which is likely a surprise to many. The classic 1990 Arrow looper is running great, always packs a punch, and has received a new ride operating system late this year. The more time that goes by, the more we appreciate the brilliance of this looping coaster. Viper features a great first drop, intense elevated loops,a unique dirt turn high in the sky and delivers an overall powerful ride. The famous red and white coaster isn’t known to be the smoothest, but being the last remaining 7-looper by Arrow, it’s worth noting how solid it is. 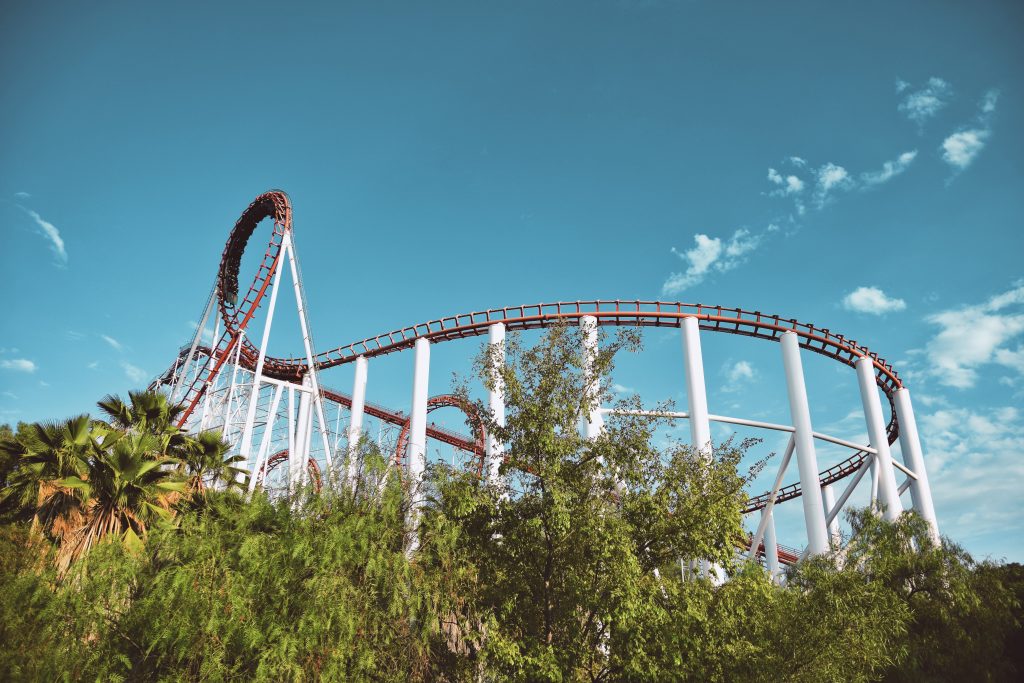 Next up is Flight Deck; like Viper, this coaster has appreciated in value over time. Flight Deck opened as Top Gun at California’s Great America in 1993 and is one of the most intense B&M Inverted Coasters. It’s quite unique to have a smaller custom B&M Inverted Coaster, and this installment is particularly great. A solid first drop, vertical loop, upwards helix, tiny-but-impressive Zero-G-Roll, and most importantly a snappy old-school B&M corkscrew followed by a helix over natural waters outside the park. The ride is short, but it does everything well. Like many old B&M Coasters, the snappiness and character-filled elements makes for a smooth, yet classic experience. 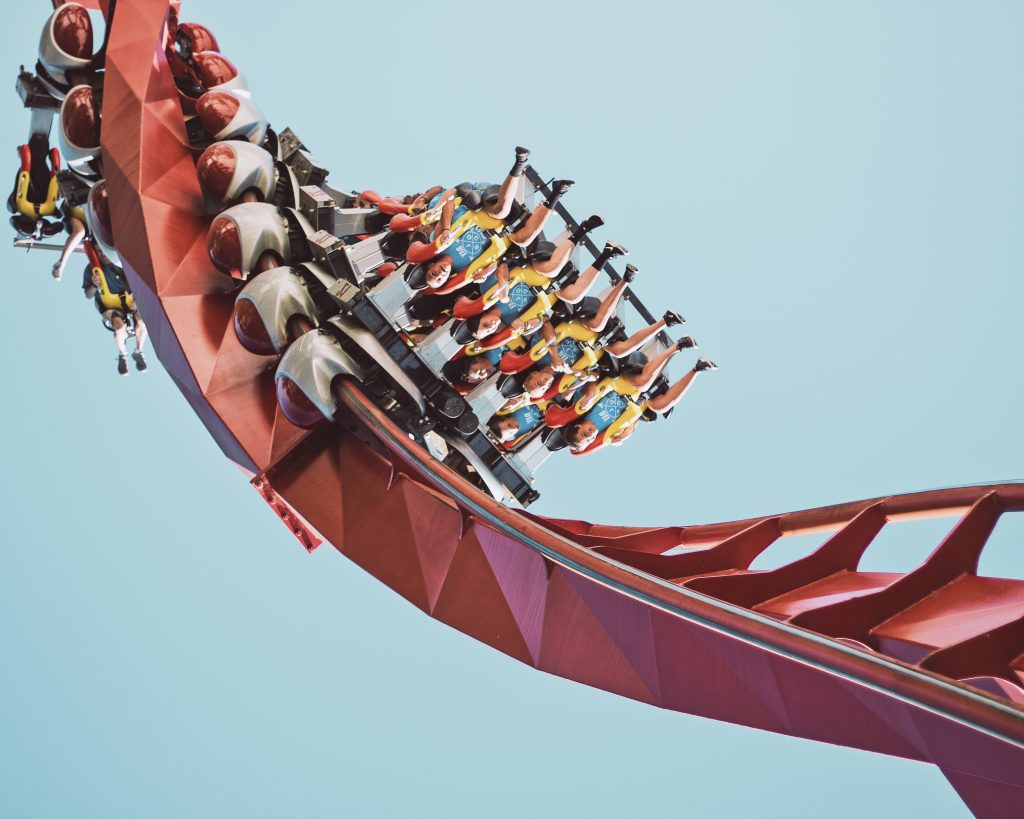 Back from the dead is Xcelerator… for now. Early this year Xcelerator reopened after having been closed for most of 2017. Just before the opening of HangTime, Xcelerator reopened and has been running consistently all year. The 2002 prototype Intamin Accelerator coaster has the fastest acceleration of any coaster in the United States (for now) and reaches speeds of 82 MPH in just 2.3 seconds. The ride’s impressive 205 feet tall top hat element offers great view and incredible airtime. The coaster is over in a flash but always amazes me by the time we hit the brakes. 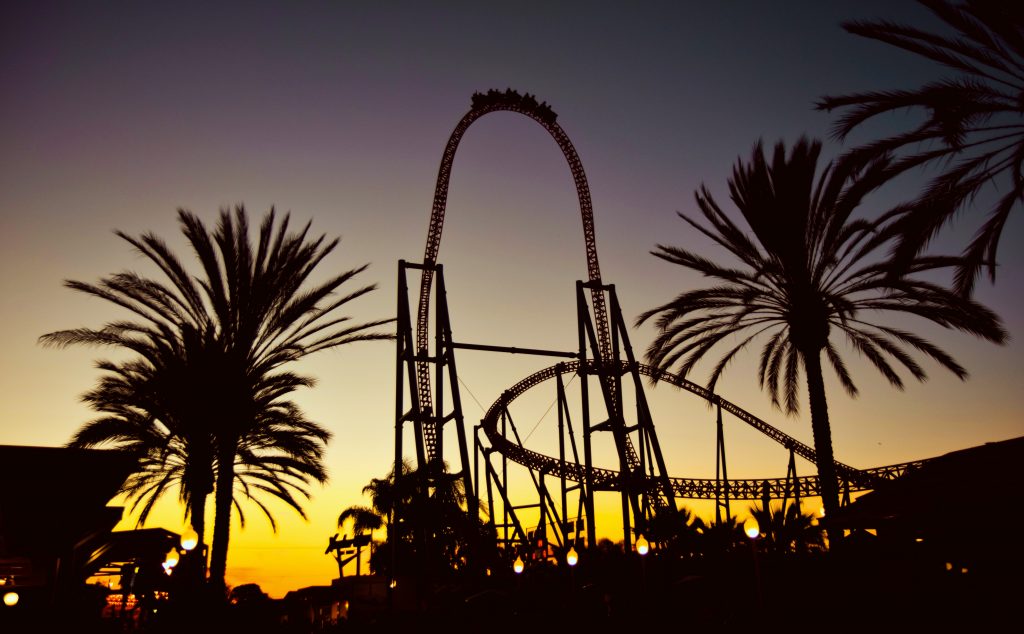 Tatsu is a coaster that we rated much higher in the past. Thanks to a combination of newcomers and old coasters we love, we pushed back Tatsu to the #6 spot on the list. Tatsu is undeniably one of the most impressive coasters every built, using the terrain to create a unique and very intense flying coaster experience. Though it is no longer the best B&M Flyer in the world, it’s probably the most majestic one. If you’re looking for an intense ride that provides an experience no other coaster can, Tatsu is the coaster you’re looking for. 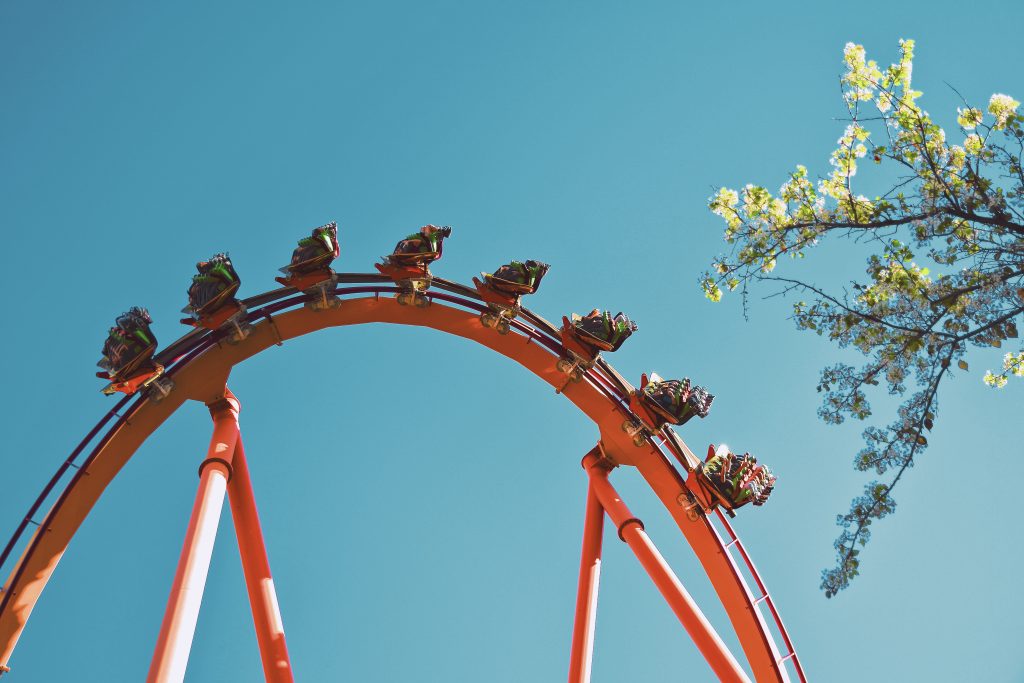 The best new coaster in California for the year is RailBlazer, of course. The innovative Single Rail Raptor coaster by Rocky Mountain Construction manages to offer one of the state’s most intense thrill rides and is the perfect new addition to California’s Great America’s lineup. The ride was troubled at opening due to new prototype-problems, but has been running consistently ever since. Ejector airtime makes up the majority of the ride experience as the single-file train throws rides over its hills and thru the inversions. The layout features several impressive elements, but thanks to the coaster’s speed it’s all over in a flash. The ride’s intensity may be painful to some, but there is no denying that this ingenious little RMC has won the heart of the enthusiasts. RailBlazer is a wonderful new addition to the stellar California coaster lineup. 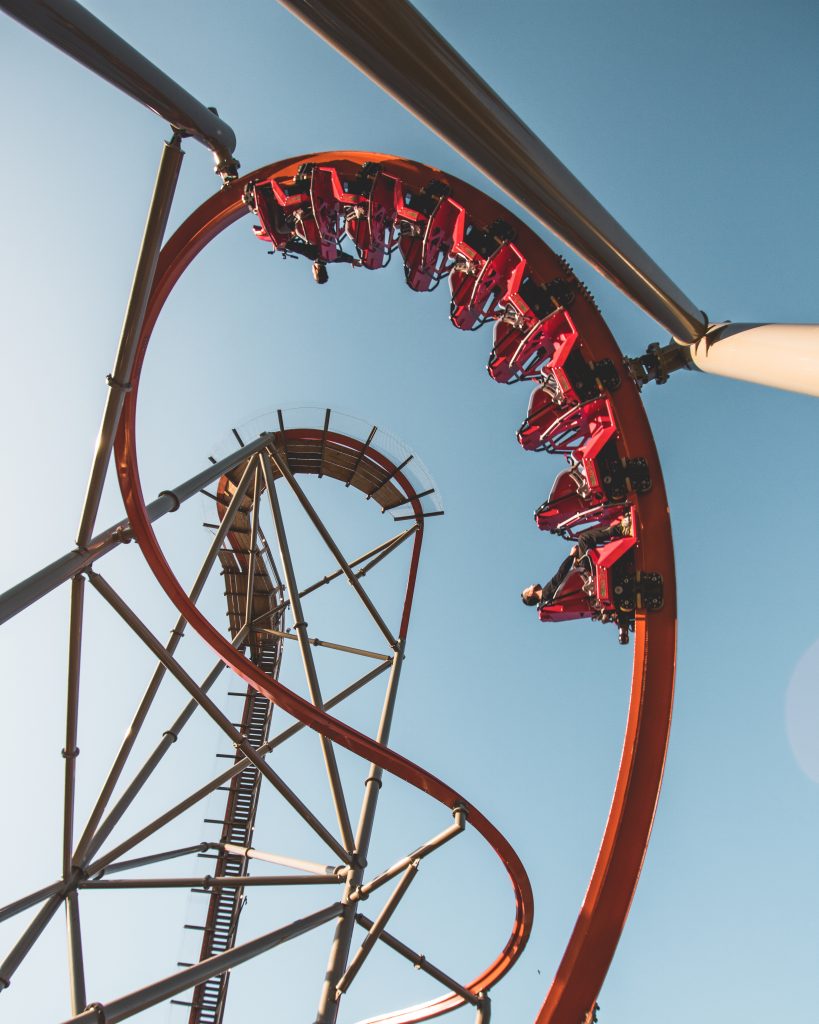 Ah! We know many of you will be surprised by Riddler’s Revenge taking the #4 spot this year. We have grown to love this B&M stand-up coaster so much. Not only is it the best B&M stand-up coaster built, it is also holding up exceptionally well. Six Flags Magic Mountain must be proud of this killer coaster; already 20 years old, Riddler’s Revenge runs smooth and still feels massive. Not only is this 1998 super-villain coaster one of the park’s best rides, it’s also one of the best in the state. If you haven’t ridden Riddler’s Revenge in a while and are confused by it’s #4 spot, make sure to get a ride on it again soon. You’ll love it. 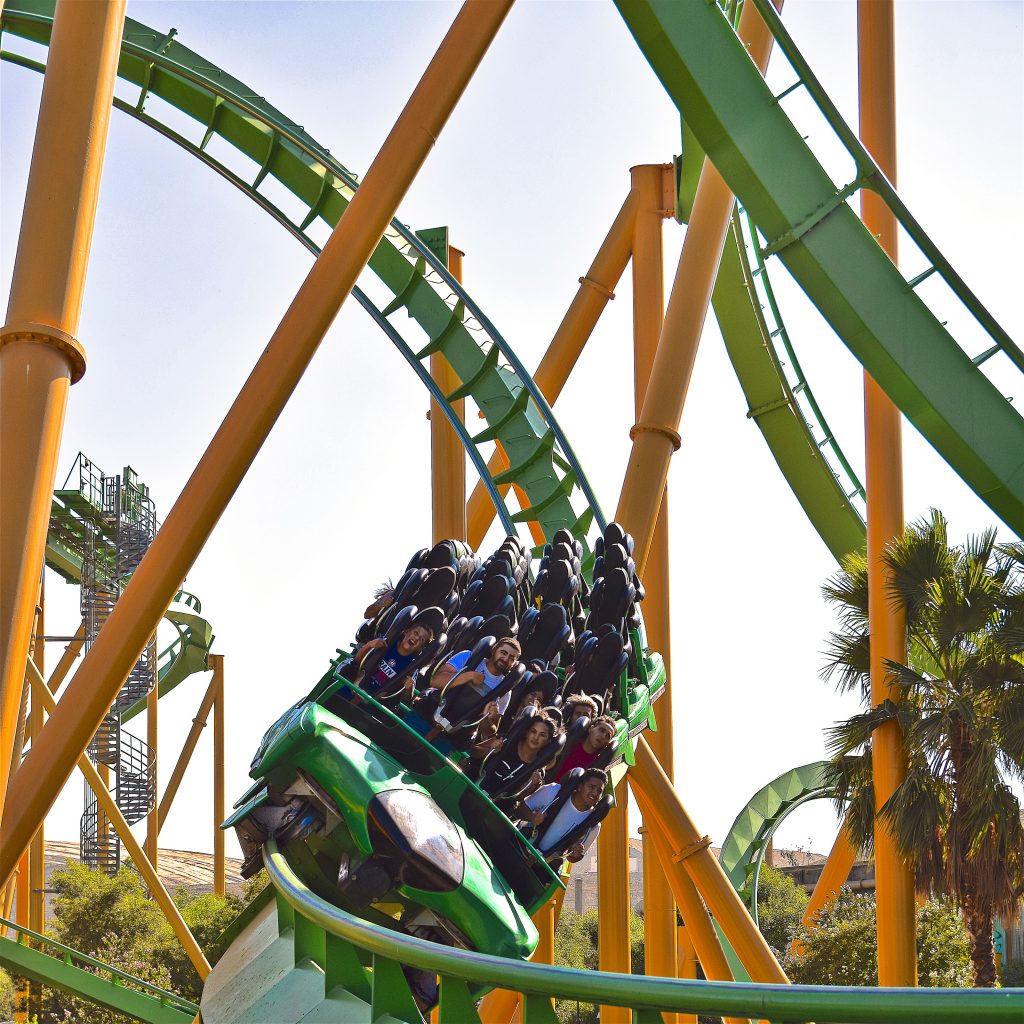 We have entered the Top 3! Joker placed #1 last year, but after some reconsideration (and based on this year’s performance), we found it to be better off as #3 this year. The 2016 Rocky Mountain Coaster Iron Horse has one of our favorite layouts, which manages to feel so much more unique than some of the other RMC Iron Horse coasters. The good mix of twisted elements including the unique Step Up Under Roll and the Breaking Wave Turn, combined with many different forms of airtime-filled elements, creates  an RMC that doesn’t do a single thing twice. Joker is one of the state’s best coasters, and certainly the state’s most underrated – it deserves much more recognition. 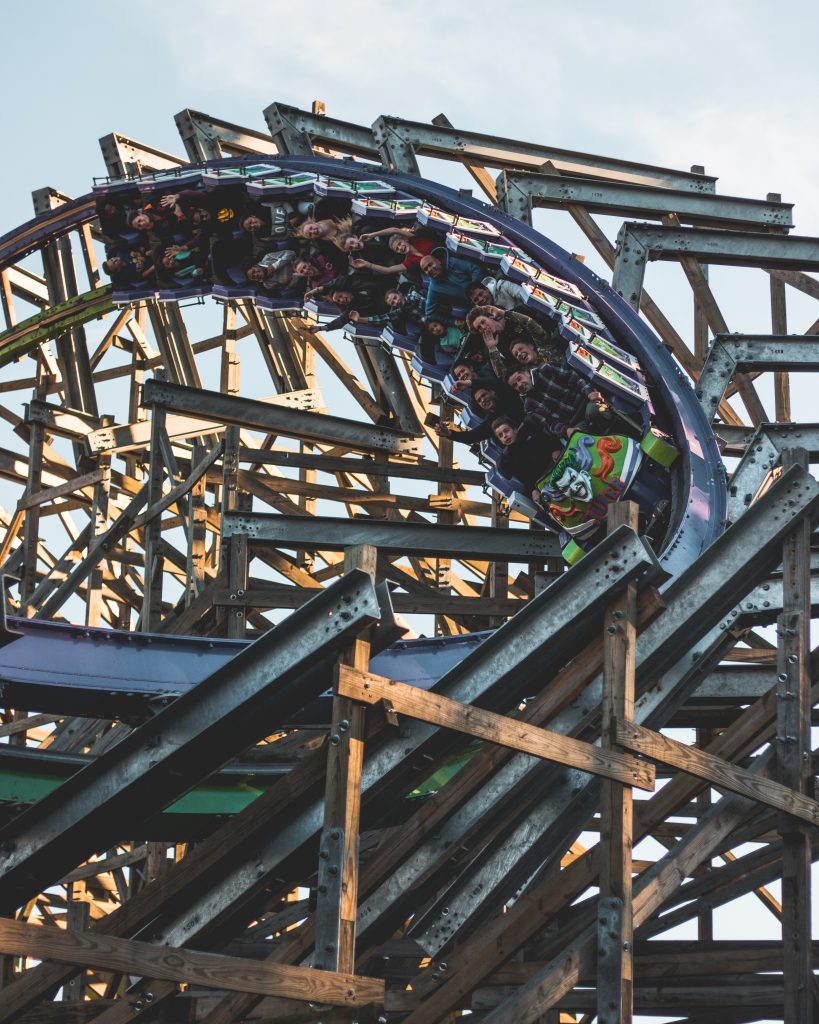 Slowly dwindling in popularity with the enthusiasts, the general public still eats up this massive 4D coaster. X2 has undoubtedly gotten a little rougher over the years, but certainly still still remains one of the most impressive coasters. X2 is intimidating, fast, unique, forceful, and one of the most innovative attractions ever built. The ride’s first drop plunges riders face-down to the ground and into a giant Raven Turn. The ride’s multiple inversions and forward / backwards coasting make for an experience that after 16 years still hasn’t been matched in the US. X2 leaves riders in awe (even if the fire effects and onboard-audio work), making it one of California’s best coasters.

The King of California, the racing Rocky Mountain Construction Iron Horse coaster! Twisted Colossus provides tons of airtime, something that California, prior to 2015, hadn’t seen much of. Twisted Colossus is notorious for failing to race, but recent operations have seen plenty of racing on this unique coaster. Even without racing, the airtime, quick inversions and wonderful length set this coaster apart – about a mile of twisted RMC track is heaven. Two stellar first drops, both sides of the high-5, two double-ups, and plenty of airtime make for a great ride. When the coaster races the interaction between two trains on each element turn Twisted Colossus into an even better roller coaster. There’s no denying that Twisted Colossus is one of the state’s best coasters, if not the best. 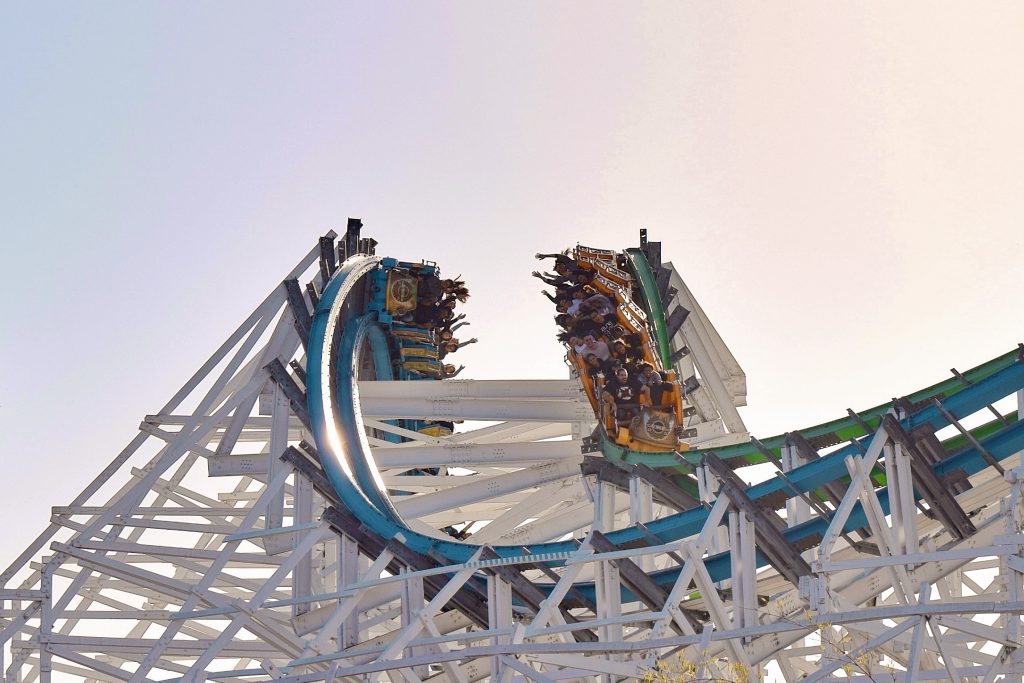 Thank you for checking out this year’s Top 10 Coasters of California! Make sure to check out our Florida and Europe Top 10s!