Sean + Alexander: Annually we have released a full California Top 50, but we decided to take it down a notch and really focus on what the top 10 best coasters in the state are, and why we think so. This year brought us Patriot, the state’s only major new coaster experience of the year, but every year again we completely find a new ranking appropriate. So sit back, and enjoy our end-of-the-year coverage finishing with The California Top 10 of 2017!

2017 has been a wild year for us at California Coaster Kings, with tours across the country in search for the best coasters, but really we have such a stellar lineup right here at home. The following Top 10 is missing an important player, Xcelerator, due to it being non-operational for the majority of the year. It’s expected to be up and running again in the Springtime and surely we’ll cover its return on the site. 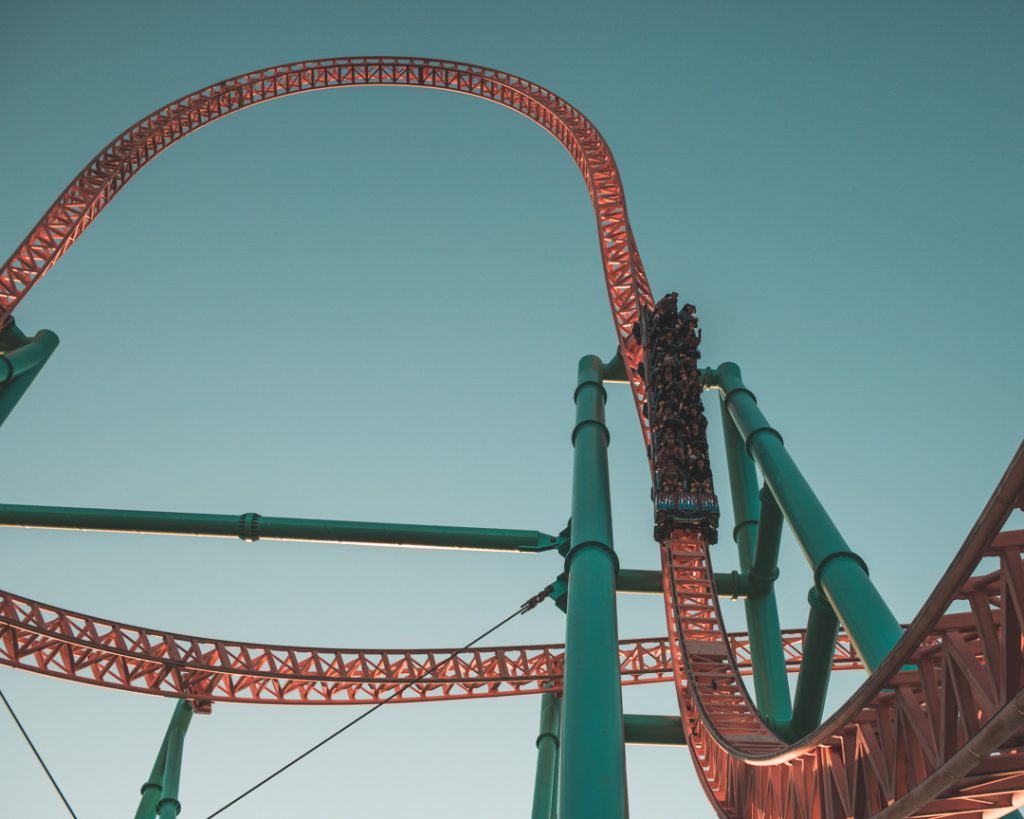 Over the past year we’ve taken a new look at all of California’s amazing offerings and the following Top 10 will likely be a bit of a surprise, we’re fully aware you may not agree, and with the immense amount of new attractions opening next year at the major Californian parks, that list will surely be a complete surprise again next year. <3

Having received a fresh coat of paint this February, Montezooma’s Revenge has shown to withstand the test of time as it was refurbished right before Boomerang bit the dust. This classic Schwarzkopf coaster has conquered all of our hearts and is a must-ride whenever we’re at the park. The classic flywheel launch and powerful Schwarzkopf loop are nothing short of amazing and with the extended closure of Xcelerator in 2017, this sure is a great fit to start of the 2017 Top 10! 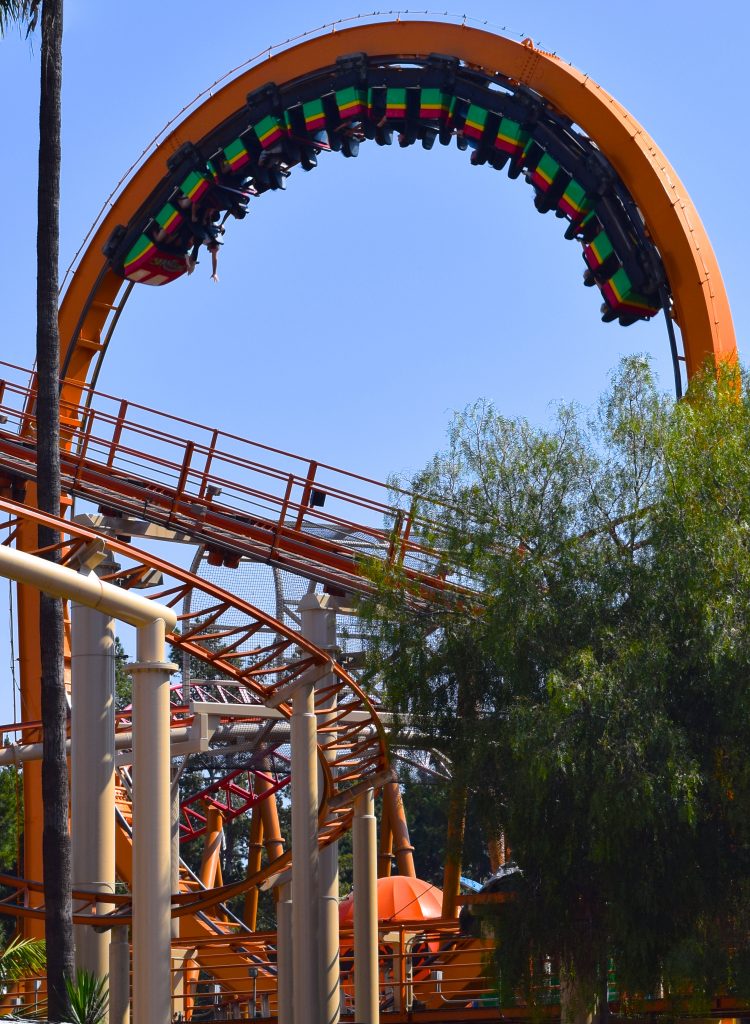 GhostRider returned in 2016 newly renovated by GCI with the addition of Millennium Flyer trains and has stunned every rider since. The layout’s great pacing and relentless combination of airtime and lateral movements has made this the best coaster currently operating at Knott’s Berry Farm. The consistency of great ride experiences and the massiveness of this ride makes it a fan favorite. 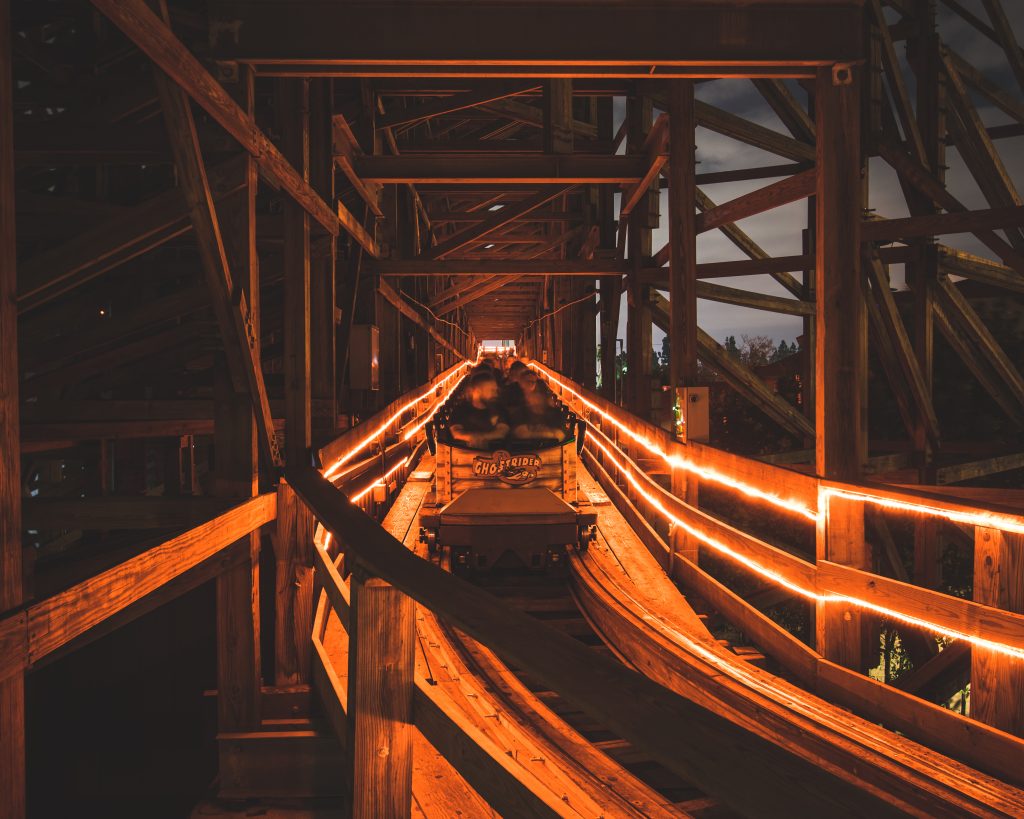 After nearly 18 years, Northern California’s largest coaster remains a favorite for us. Though it’ll soon be dwarfed by massive new rides coming to the Bay Area, the coaster has held up incredibly well with a layout that can’t be beat. The amazing first drop, the Sea-Serpent Roll, and surprisingly unconventional second half make this ride a can’t miss in Northern California. Thanks to the amazing maintenance on the ride and the never-ending popularity among guests, this fan-favorite always delivers and is a coaster belonging in our Top 10. 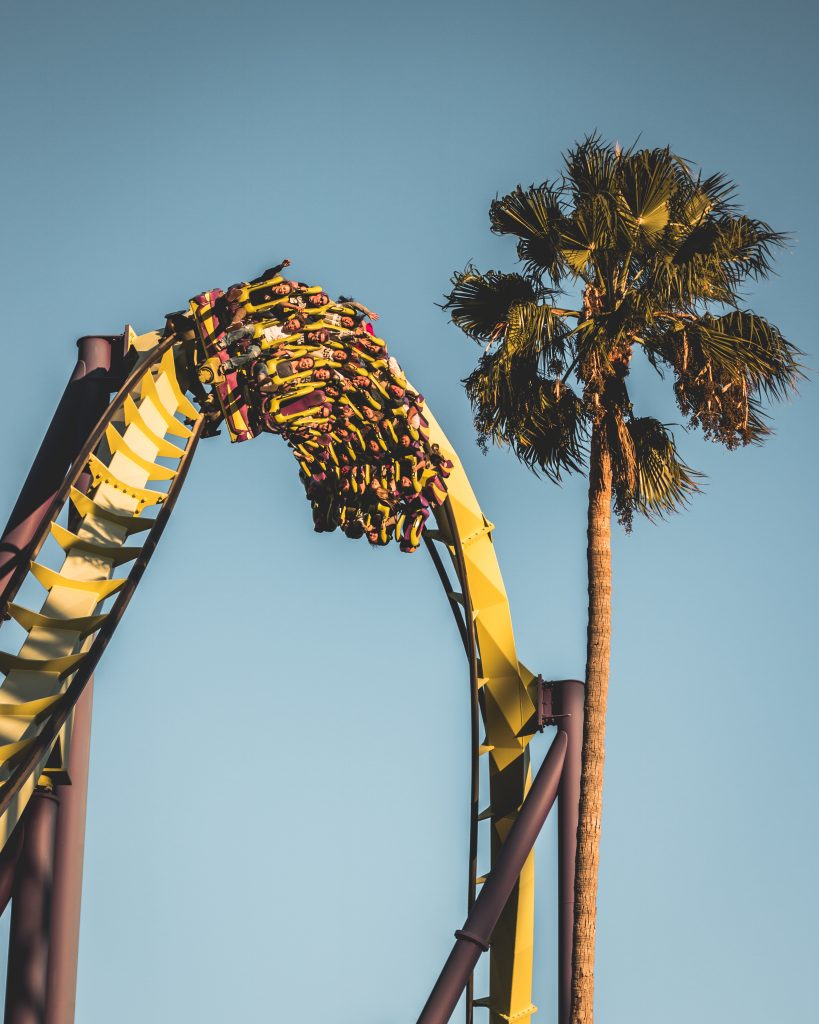 The Thunderhead of the west, the absolute best woodie in the state of California is the relentless Gold Striker. Every single second after the train rolls of the lift-hill is filled with airtime, quick transitions, turns, and lovely GCI smoothness. We were afraid that the ride would not hold up well due to its aggressive nature, but after running 5 seasons, it runs as amazing as the first day. The combination of walls, tunnels, and a large twisty GCI layout makes this the favorite coaster at California’s Great America. For now at least 😉 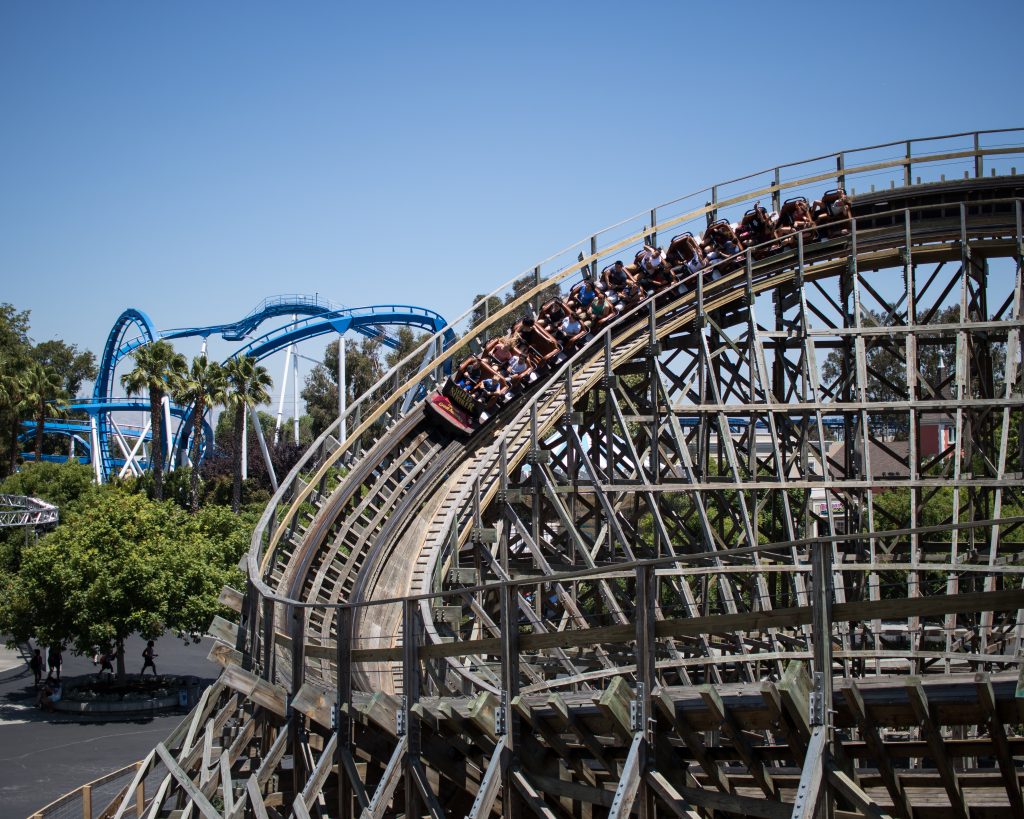 Superman Ultimate Flight is the first of many now-cloned coasters, but still surprises us every ride. Why is Full Throttle not on here? Well, Full Throttle should be doing a whole lot more than it does and in our opinion is far inferior to the genius Sky Rocket II model that is NorCal’s most impressive launch coaster. Superman Ultimate Flight operations are amazing, and the ride experience is stellar. Especially now it has its own area with the incredible Wonder Woman: Lasso of Truth and The Joker accompanying the ride, it really is the star ride with a star area it always deserved to have. 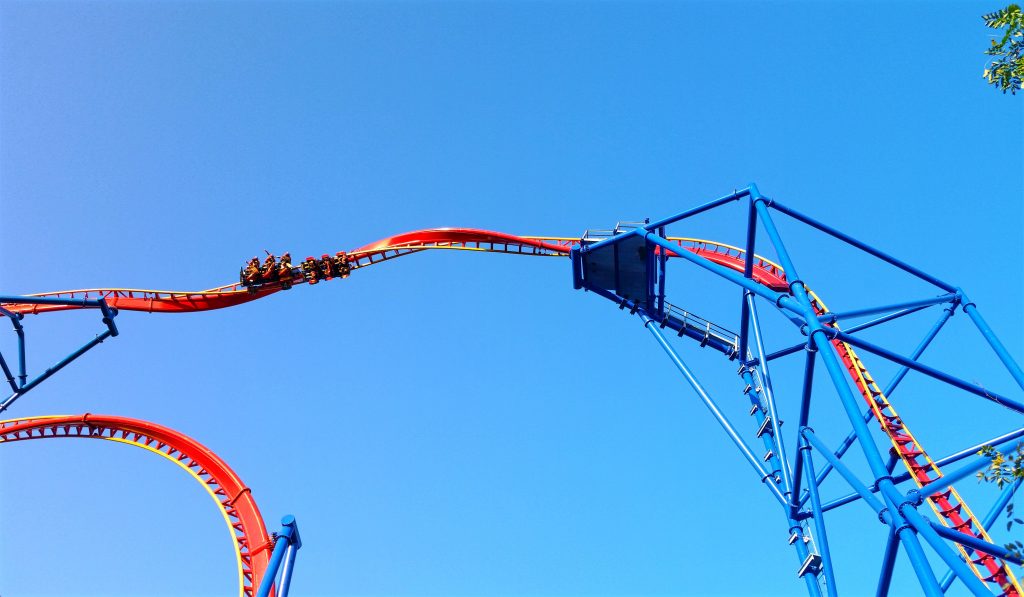 Dropping back south it should be no surprise that we hit the Six Flags Magic Mountain section of the list. The park has one of, if not THE, best coaster line ups in the world and this year we recognize a special coaster in that lineup. With the increasing removal and conversion rate of B&M Stand-Up coasters, including California’s very own Vortex, this type of coaster is becoming rarer. Thanks to the amazing efforts of Six Flags Magic Mountain, the Riddler’s Revenge got a makeover this year with updated station building and facades, freshly refurbished trains, and an amazing new color scheme. The ride is running very well, and as the World’s largest, tallest, and fastest Stand-Up Coaster has again in 2017 proven to be a major player in the coaster world, one we should not forget about. 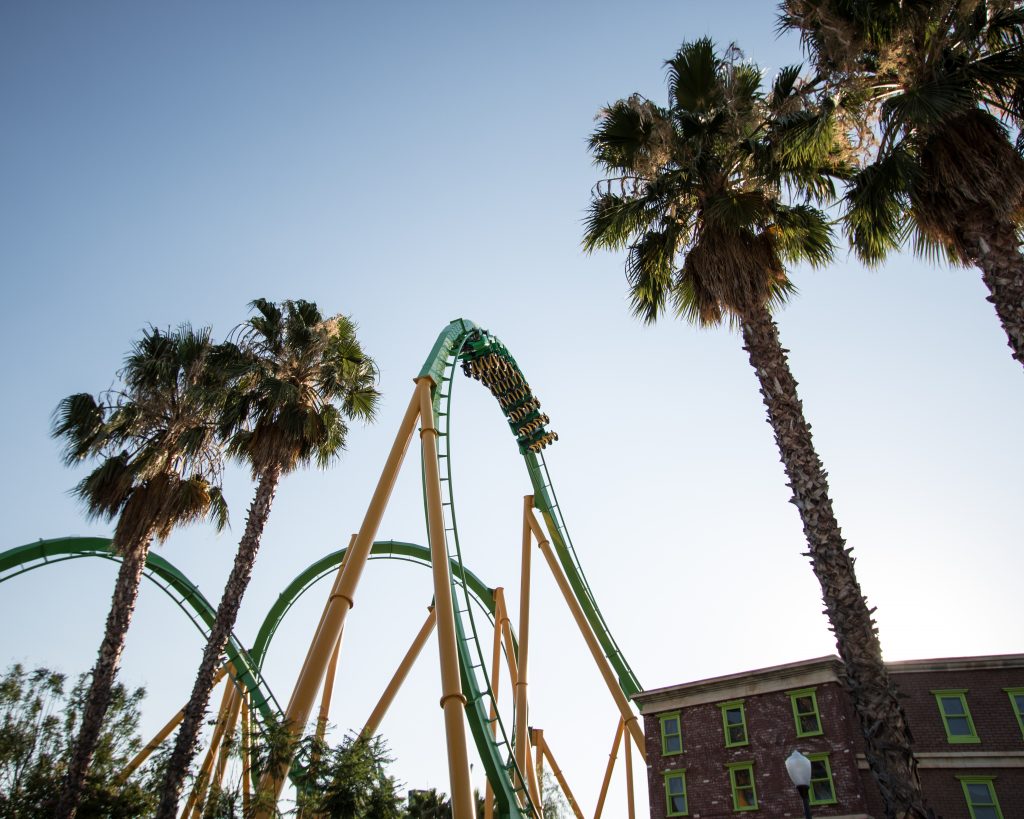 Flying at the Speed of Fear we did all year long as this 2006 addition even ran three trains during the peak season. Tatsu never fails to amaze riders with its impressive mountain/terrain layout. No other experience in California can match that of Tatsu and after nearly 12 years of operation it is still one of the best coasters the state has ever seen. The amazing Pretzel Loop and finale, along with its perfect capability to offer mind-blowing night rides, create an experience hard to find elsewhere in the world. The Flying Beast from the Far East is a crown-jewel ride only very few other coasters in California can top. 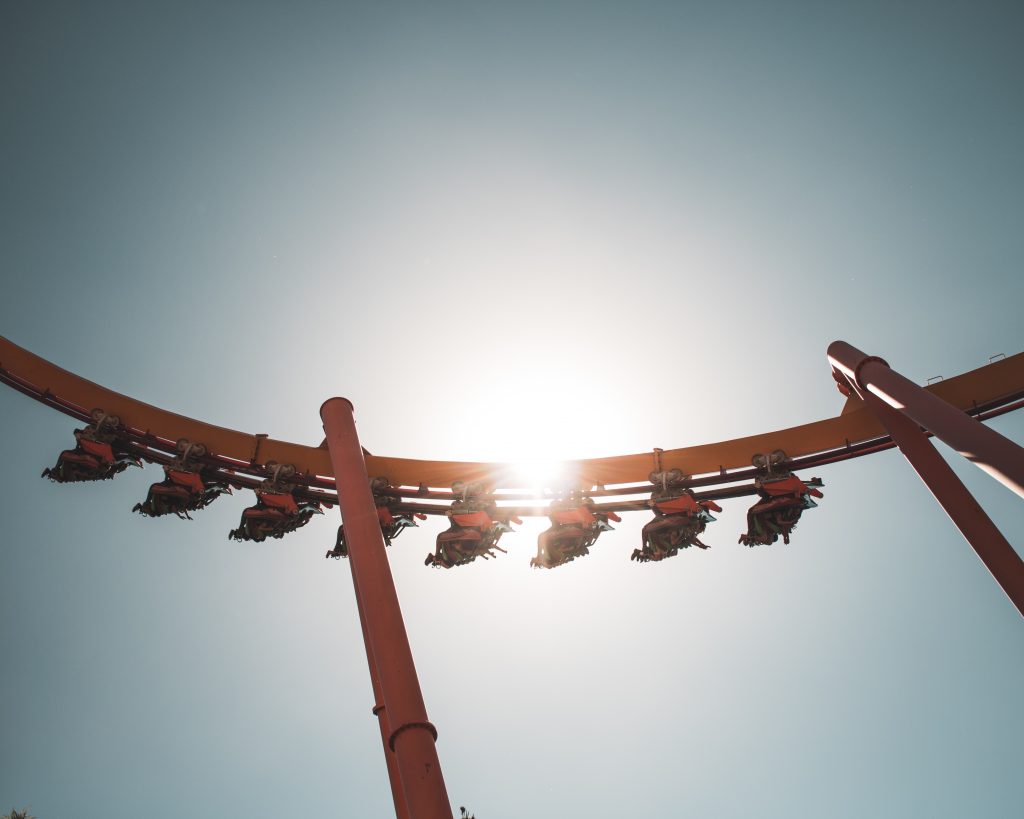 Perhaps the craziest coaster of them all is decreasing in popularity with the coaster enthusiasts, but we simply can’t forget the amazing significance of this ride. X2 may beat you up a bit, but the sheer forces of the ride and the movements of the ride vehicles frighten even the best-trained coaster enthusiasts. The ride has been running consistently and though the effects are becoming problematic from time to time, this ride still delivers what we ultimately look for in a coaster, pure thrill. Arrow’s craziest creation is going strong and we’re still big fans. 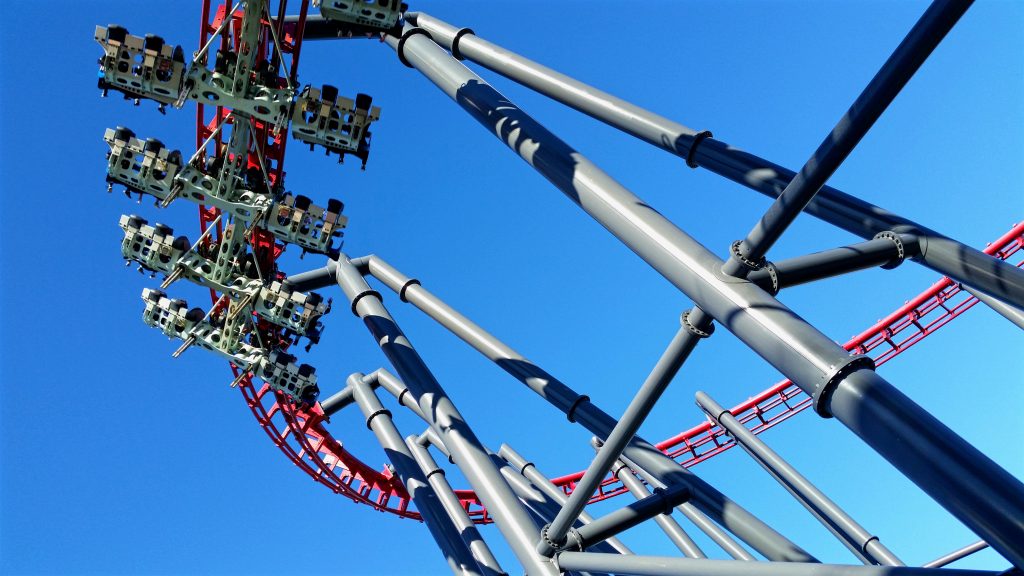 In 2017, Twisted Colossus became the coaster we always secretly knew it would be: a shadow of its own full potential. Varying degrees of operational success lead to limited-but-not-rare dueling, but with 50% of the ride’s rolling stock out of commission toward the back half of 2017, dueling became impossible. Though a likely necessary move to promote a smooth transition into year-round operation, 2-train operation robs the ride of its finest quality – one that was already inconsistent at best. There’s nothing more frustrating than a good ride that could be great, but hopefully good changes are in store for the ride in 2018. 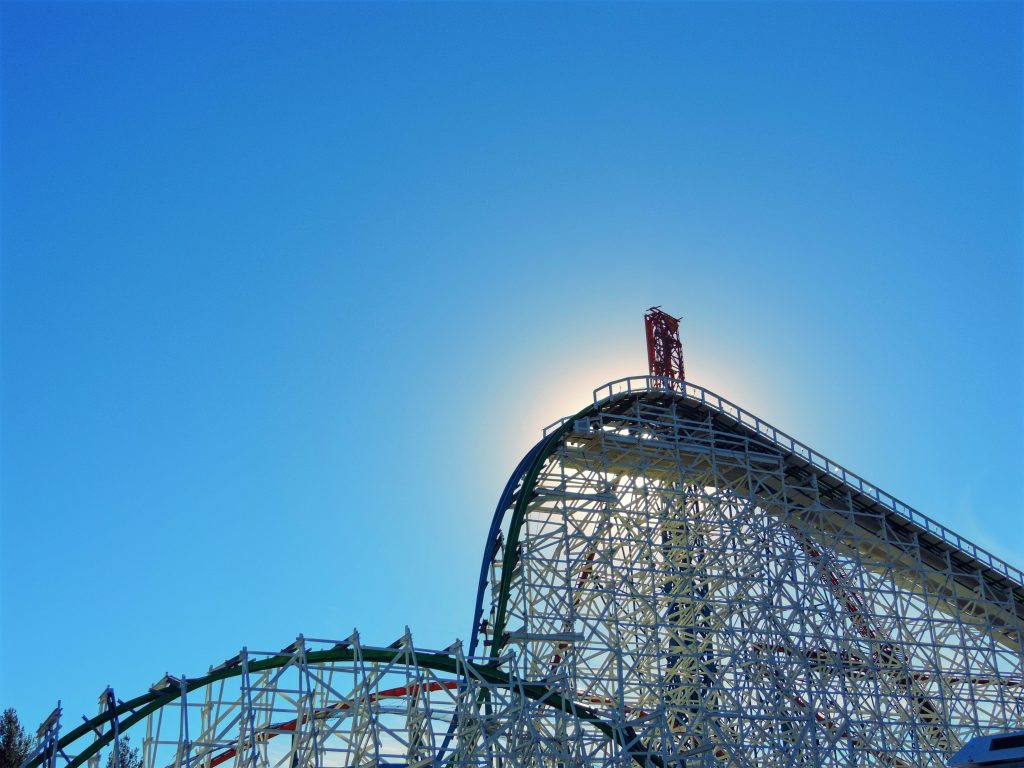 As SoCal’s resident Iron Horse trends down for the year, its NorCal counterpart enjoyed a sophomore season of better operations and performance; the door was open for The Joker and he snuck through like villains do. More than just California’s “other RMC”, Joker delights with acrobatic charms on a foundation that only GCI could provide, making it a special installation among special installations. Not constructed on the standard I-Box canvas of hastily-built-and-fatally-large woodies, Joker’s cozy curves and jubilant pacing have come to demonstrate that Alan Schilke can conjure major-impact thrills out of a medium-impact subject. The scales could tip in favor of either Iron Horse for 2018 dominance, but whatever happens, the takeaway here is that this is RMC’s world and we’re just living in it. 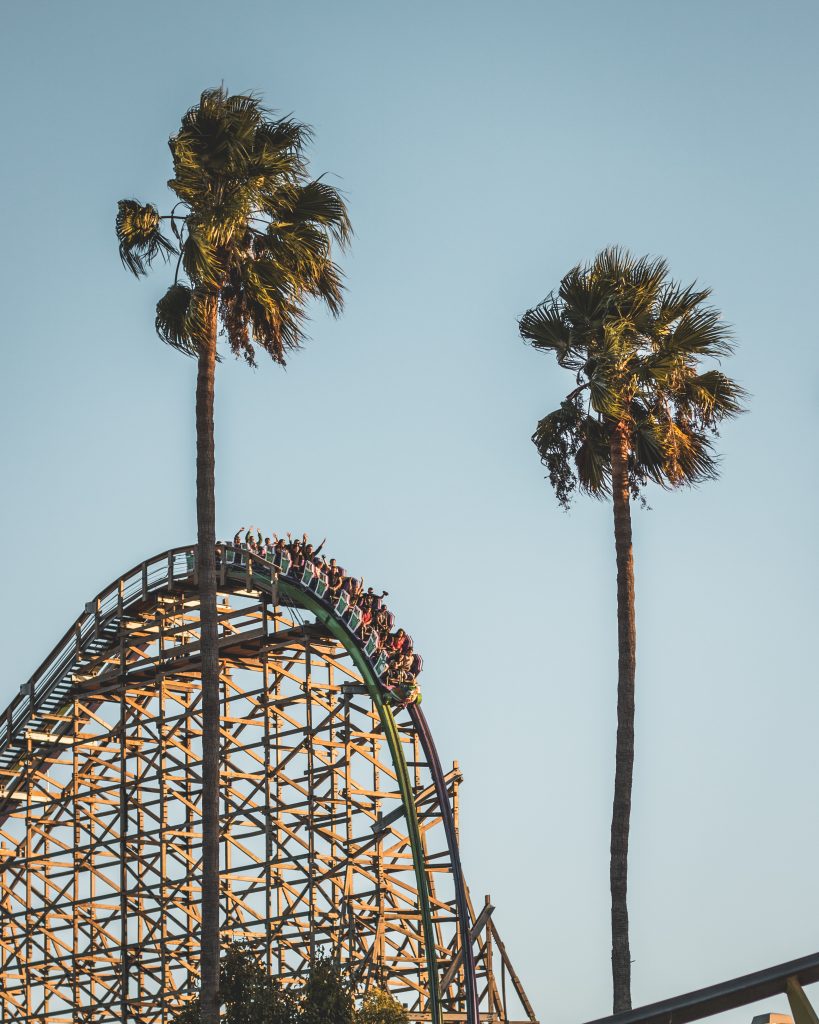 And with this Top 10 we finish the year! We want to thank all of our amazing readers for the continuous support, the love and the interaction on our site and social media platforms alike. We strive to offer you amazing RailBlazer, Harley Quinn Crazy Coaster, CraZanity, HangTime and Electric Eel coverage the upcoming year, while maintaining our usual coverage from around the state and the world. Thank you!

As stated above, make sure to follow us on our social media for exclusive coverage!  Facebook–Twitter–Instagram